Some farm tracks but mostly pathless terrain due to the route being covered in snow for the most part. In good weather the paths would be visible. Be prepared to negotiate short fences where the stiles have not been replaced properly.

Strong winds and snow with very poor visibility for the majority of the walk.

​​​​​Maps
​​
OS200 - Llandrindod Wells & Elan Valley
OS201 - Knighton & Presteigne
​If the above GPX file fails to download or presents itself as an XML file once downloaded then please feel free to contact me and I will send you the GPX file via e-mail.  ​​ 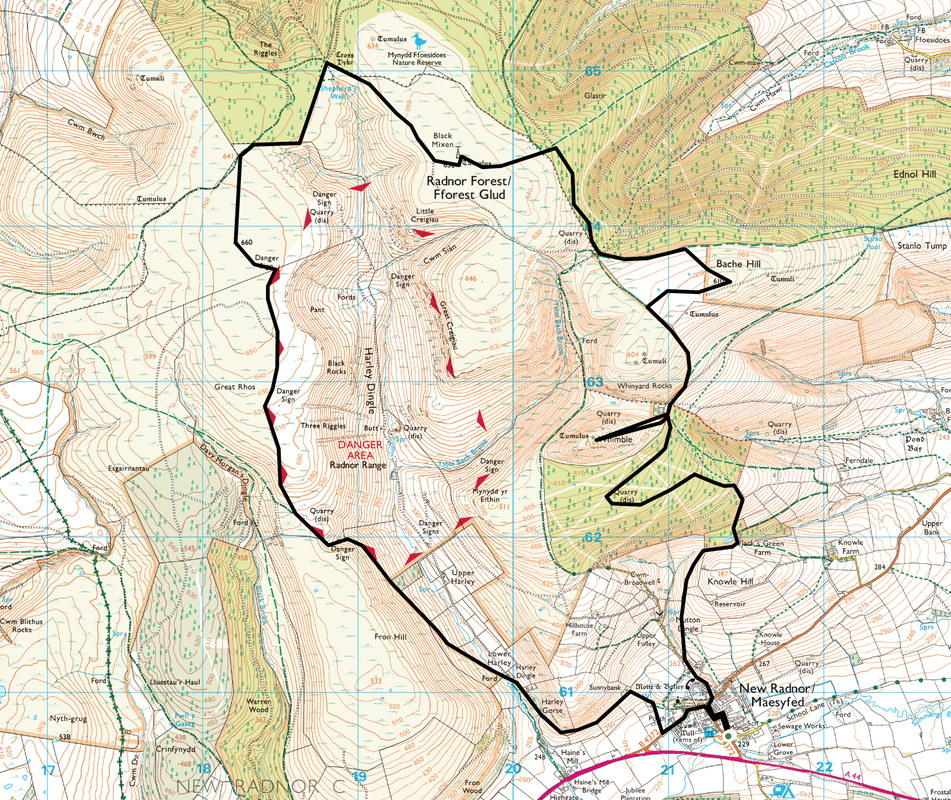 Not a good day for photographs unfortunately!! Apologies in advance.

All looked ok on the weather front as Dave & Fudge arranged to meet a couple of fellow walkers from another walking group. This was in order to tackle the 3 Welsh Nuttalls of Bache Hill, Black Mixen and Great Rhos which are not that far from where we live. The start of this walk is from the village of New Radnor where there is plenty of off road parking.

All was well on leaving New Radnor - sure there was a slight drizzle but nothing compared to what we encountered as we rounded Knowle Hill and neared our first ascent of the day. On the way to Bache Hill is the lovely Whimble and approaching the turn off to the west it really did start to pile down with snow. Added to the snow falling was a fierce wind which made walking uncomfortable however we managed to attain the summit without too much difficulty although the wind increased in force on the top. Leaving Whimble we made our way back the way we came and followed the farm track down before crossing a fence to climb up to the summit of Bache Hill.

From Bache Hill it was a simple case of heading off to the north west where we knew at some stage we would meet the plantation fence and once we reached it we followed this to a junction of paths, following the main track north through the forest. Further on there is a good forest track that comes in from the right and it is at this point we turned off west to follow the access road to the summit of Black Mixen. Visibility was so bad that we did not see the huge mast on the summit until we were virtually on top of it and it was quite surreal when appearing in front of us all of a sudden.

From Black Mixen the visibility appeared to get steadily worse as we made our way over pathless terrain to the corner of a plantation from where we headed south along the fence line, hand railing this forest until we arrived at a path junction - this was our cue to head immediately south, again on pathless, lumpy terrain to eventually reach the Trig Point on the summit of Great Rhos.

Navigating in this thick grey soup was difficult all day and it came as no surprise that we made a slight navigational blip leaving Great Rhos - instead of continuing to head south we followed a fence east for about 600m before we realised we were heading in the wrong direction. It was a simple case of retracing our steps to the start of the Firing Range where we then realised where we had made the mistake and headed down a bearing where eventually the path materialised. The path then continued south, hugging the edge of the Firing Range before dropping even more steeply to the ford at Harley Dingle. From here it was a simple case of following the good path east to reach the B4372 into New Radnor.

Despite the very poor visibility, this was still an enjoyable walk for the simple fact that it was good navigational practice and just goes to show that you need to be prepared for all eventualities when it comes to the unpredictability of the weather. We would never have envisaged the conditions we had today when we set off. This walk will need to be repeated in order to see the views we missed today! 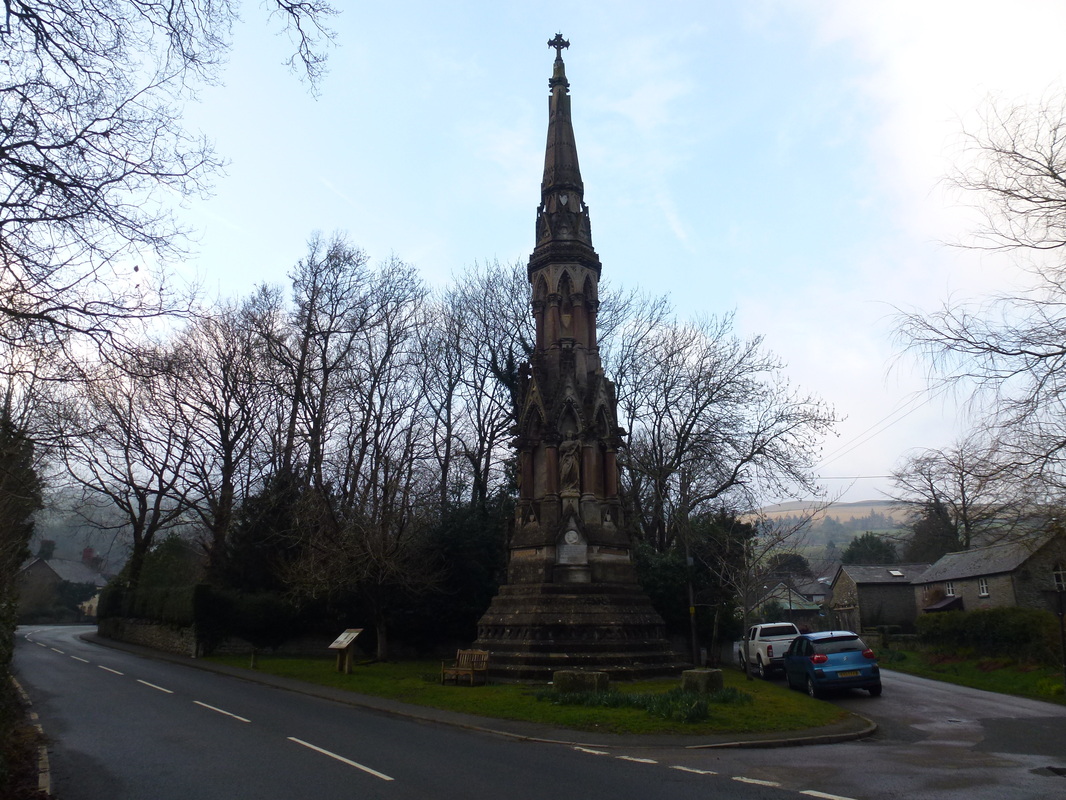 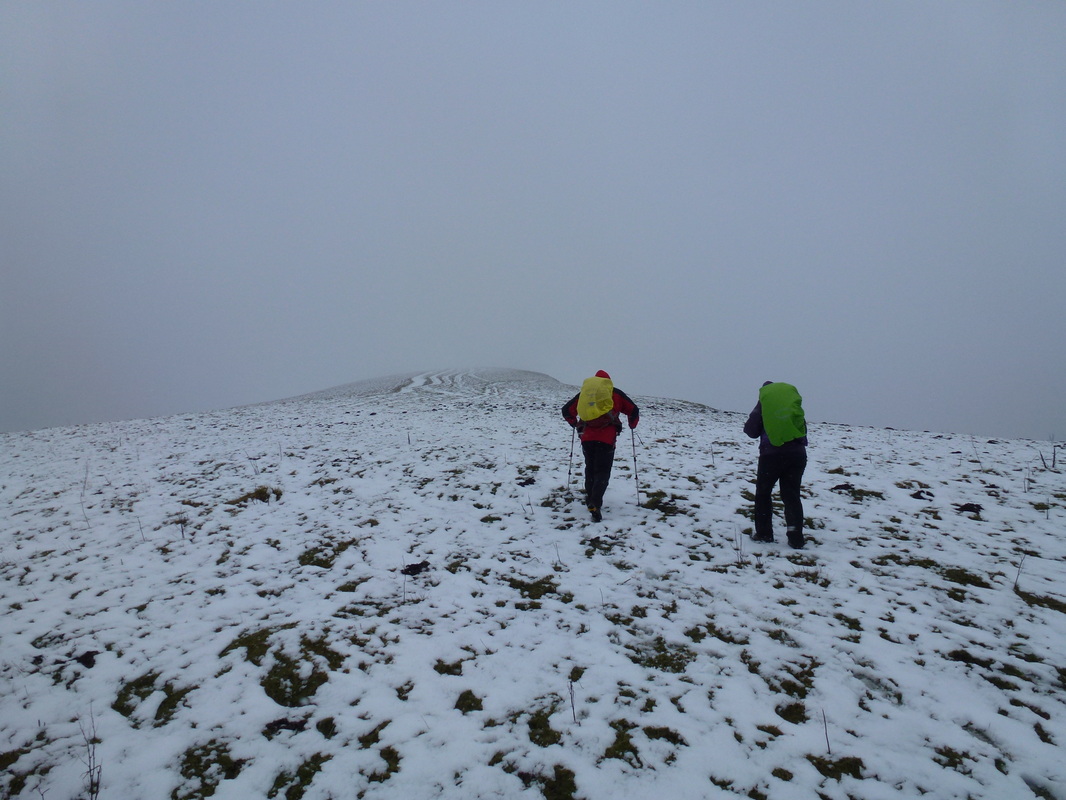 Heading up to The Whimble 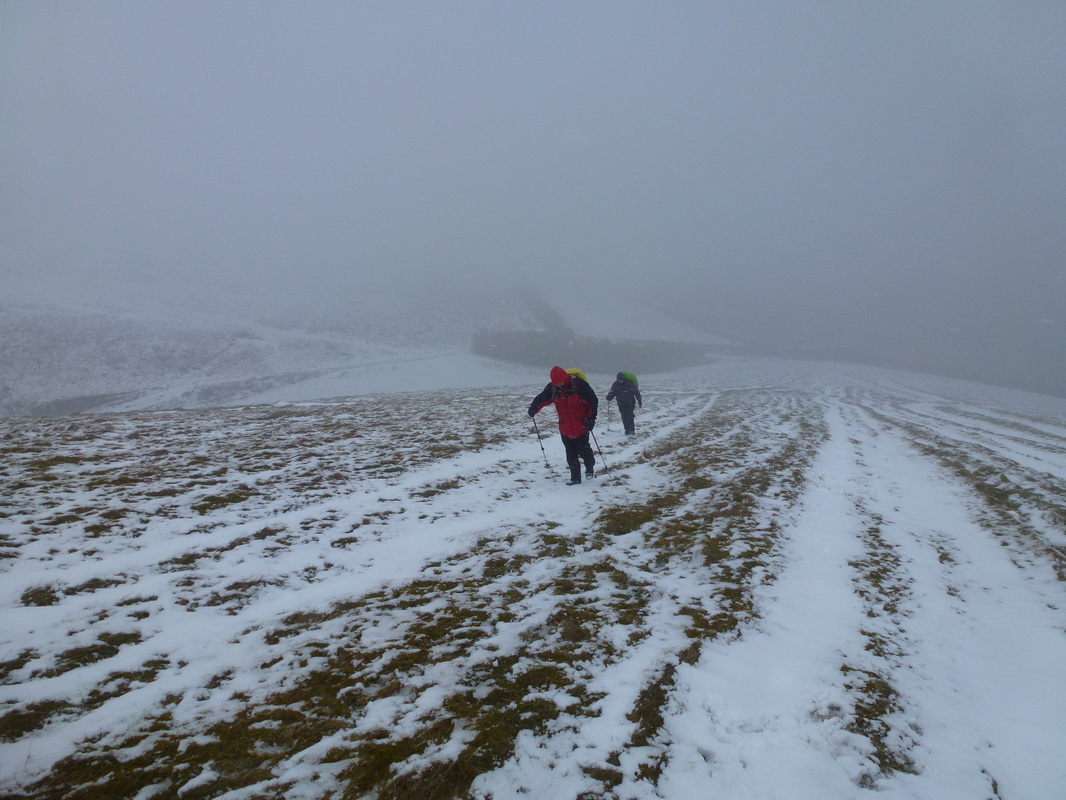 From further up The Whimble - it wasn't a day for views today.
​Just staying on your feet and remaining navigationally sound was the order of the day! 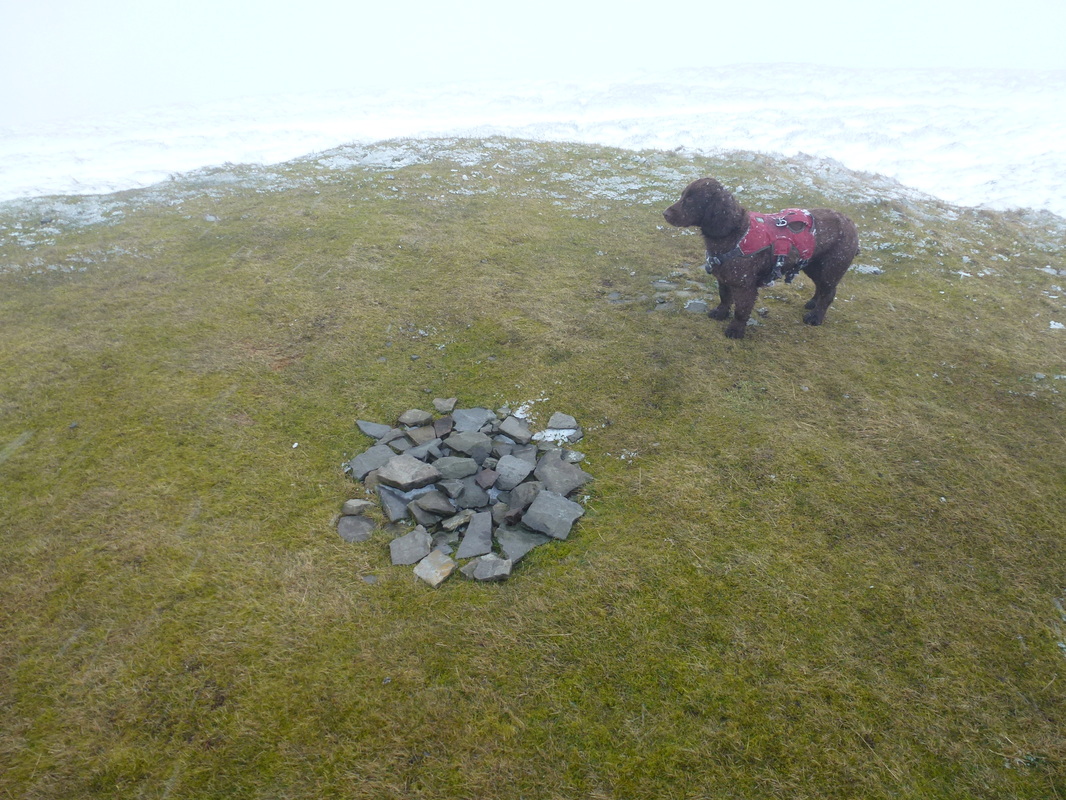 Fudge looking nonplussed on the summit of The Whimble 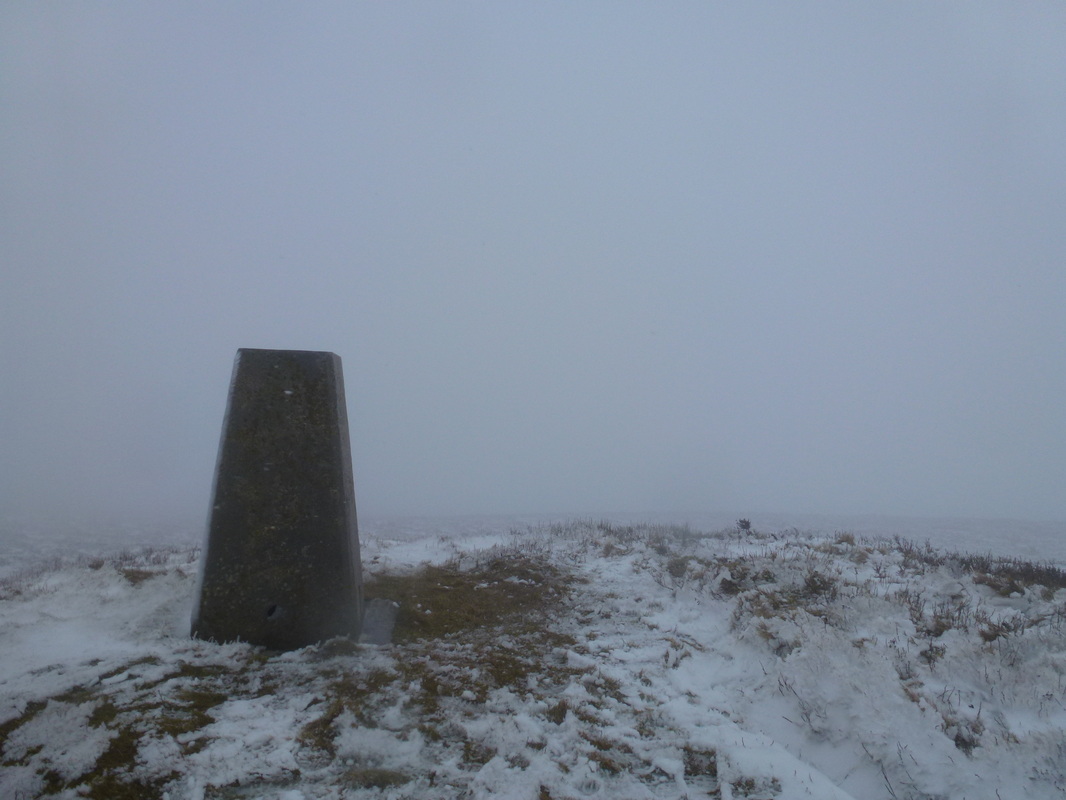 The summit of Bache Hill - there is a view from here, but not today 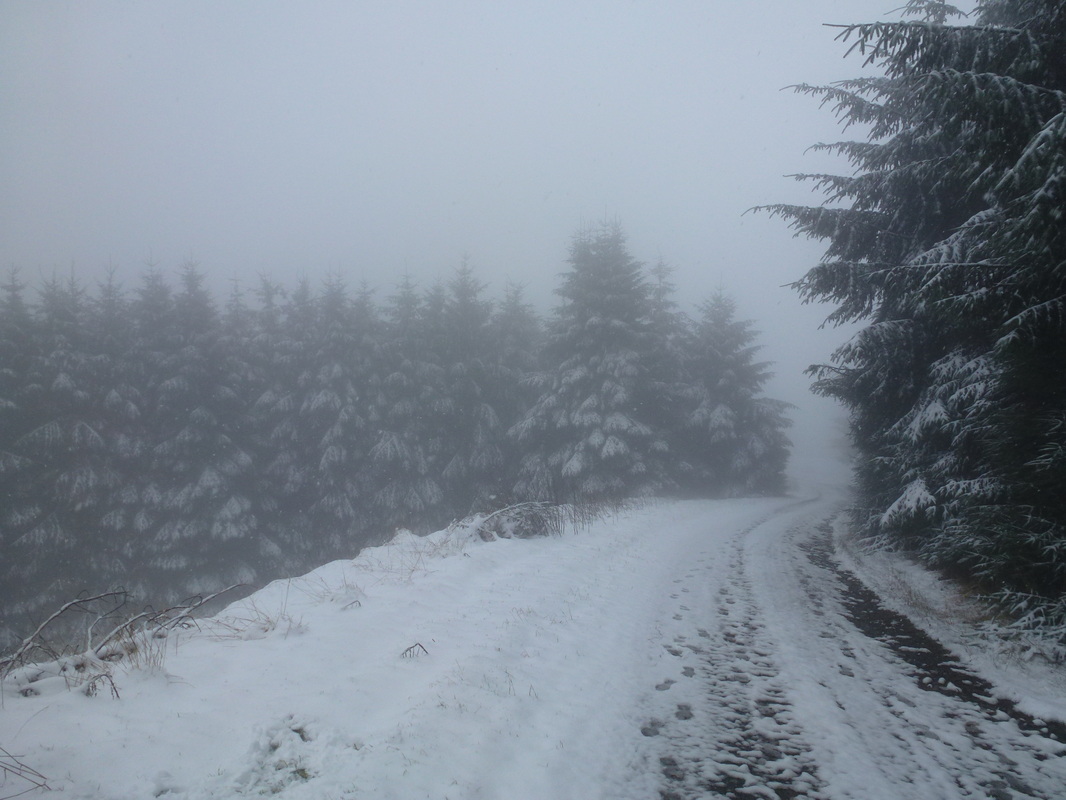 Heading along the forest track to Black Mixen 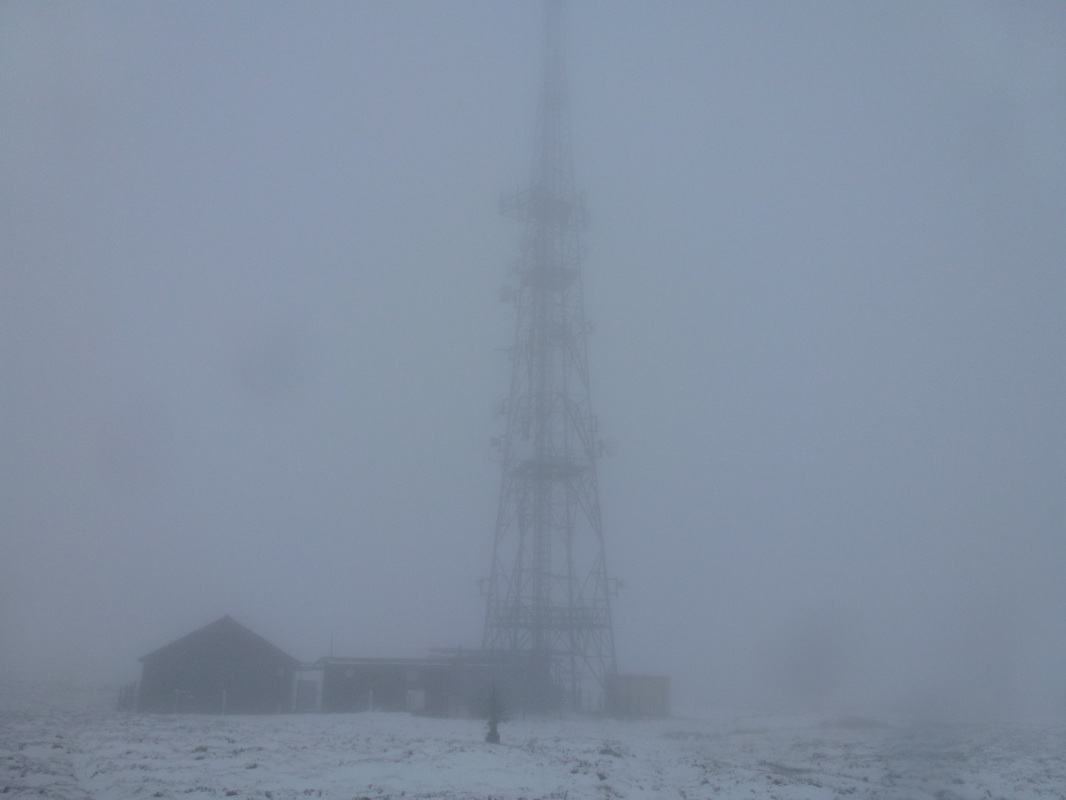 The radio mast on the summit of Black Mixen 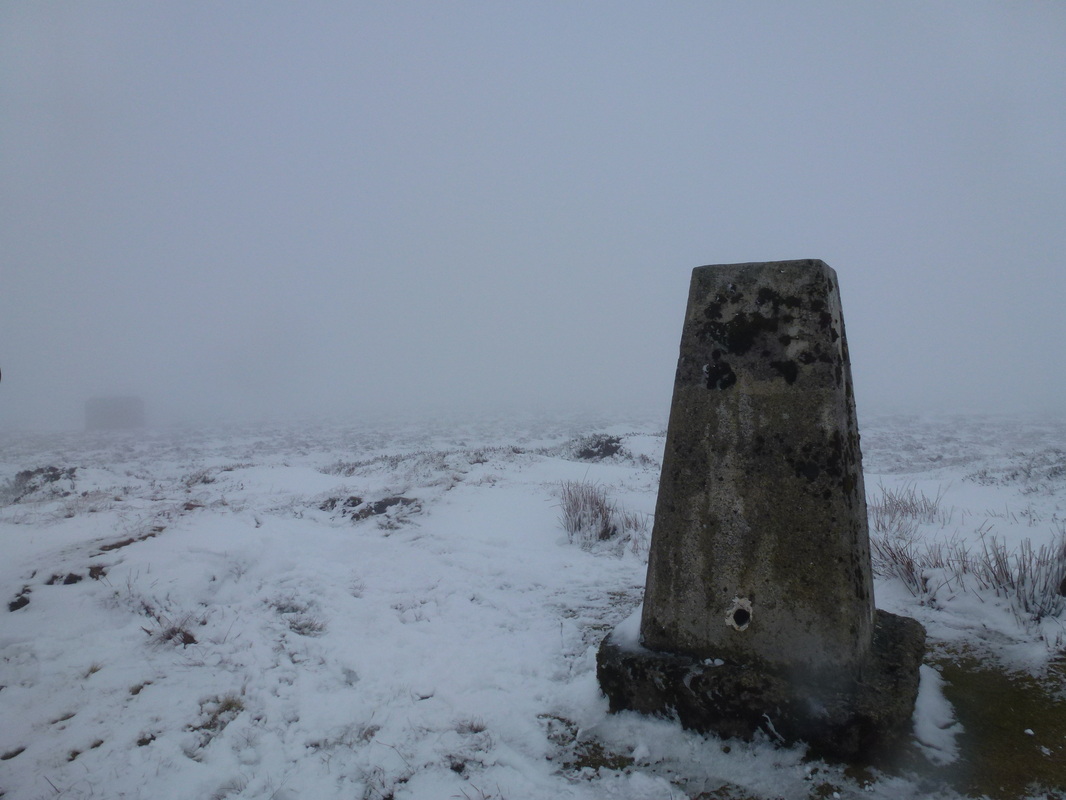 The summit of Black Mixen 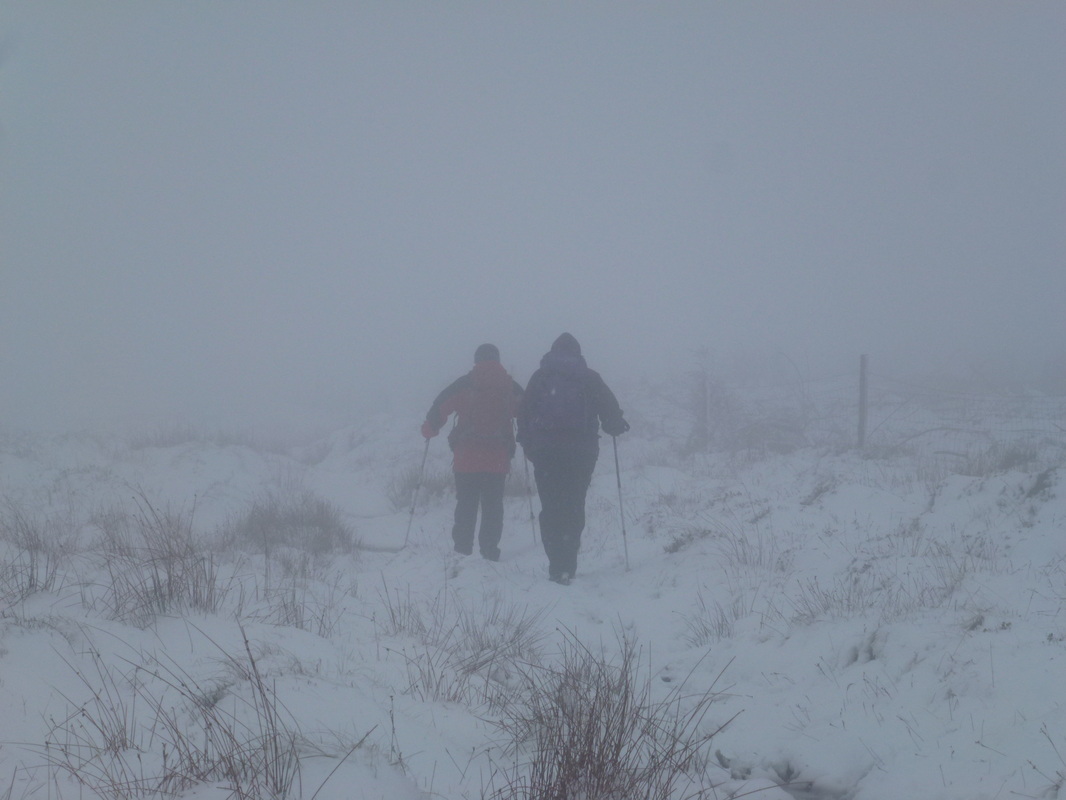 The visibility was getting worse as we headed to Great Rhos 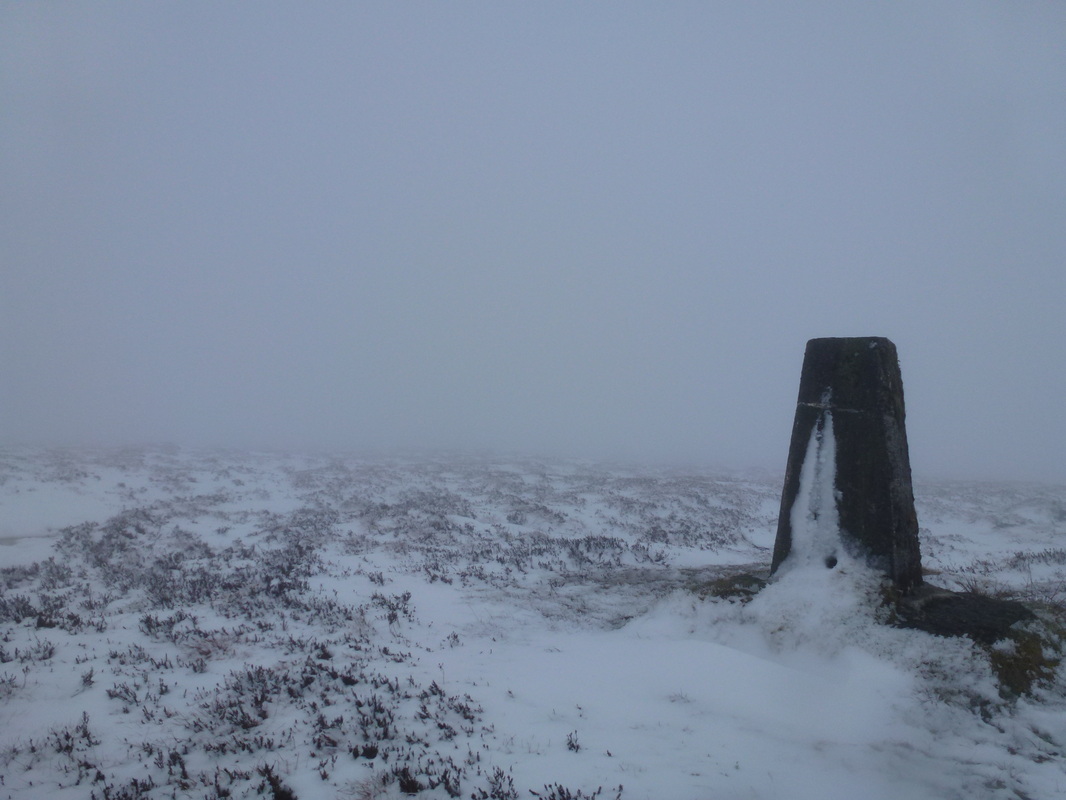 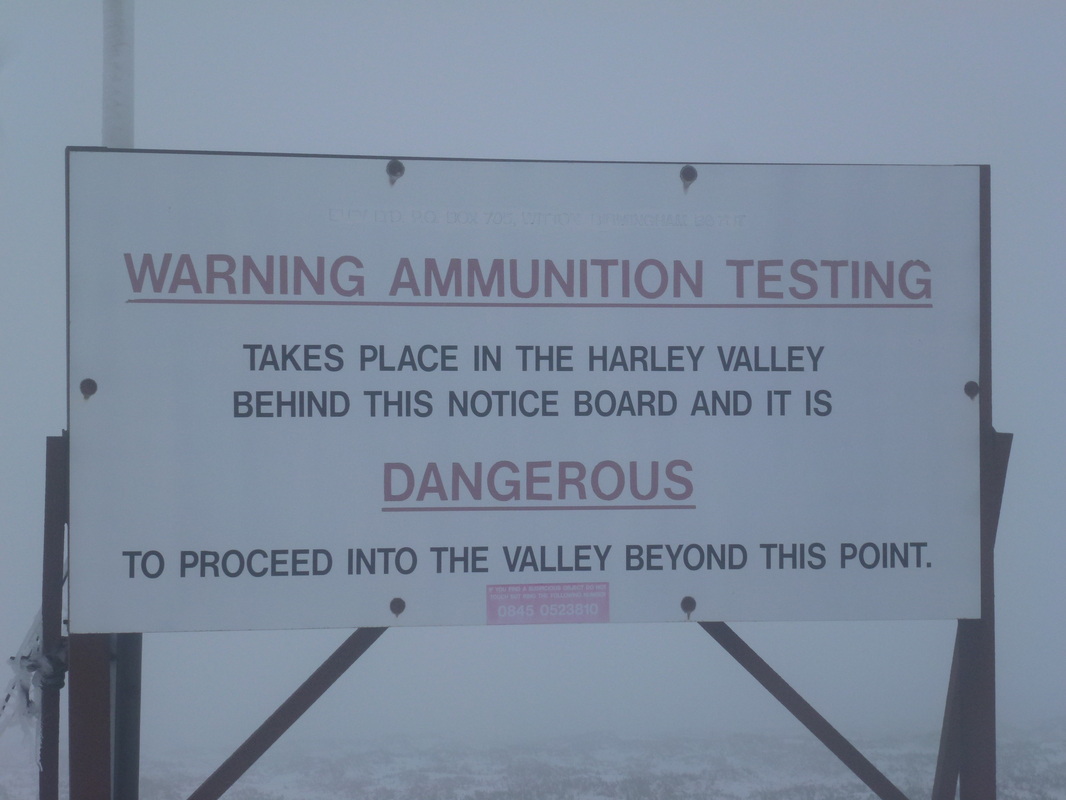 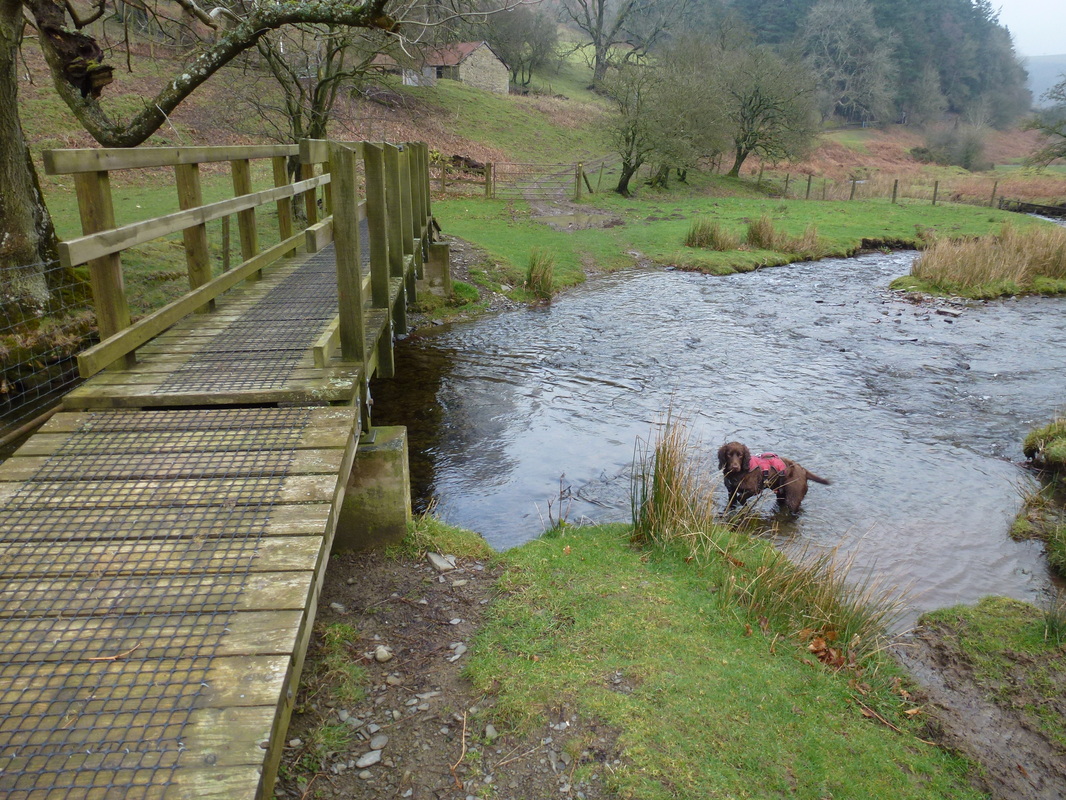 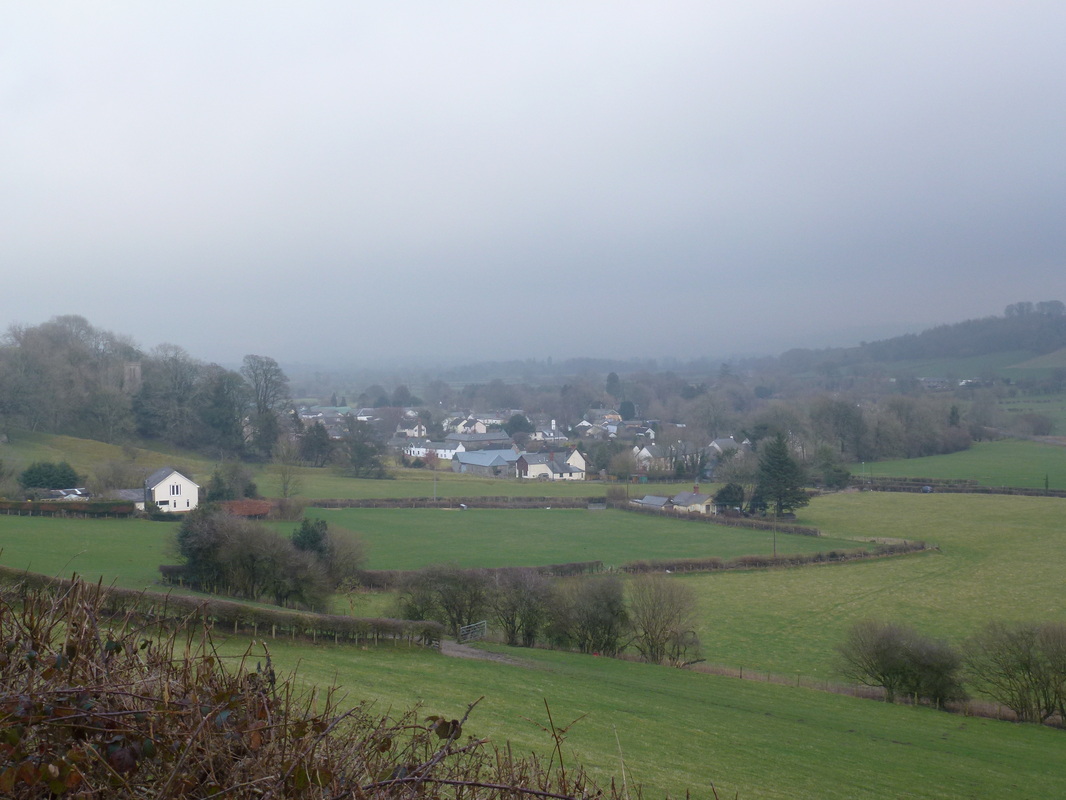 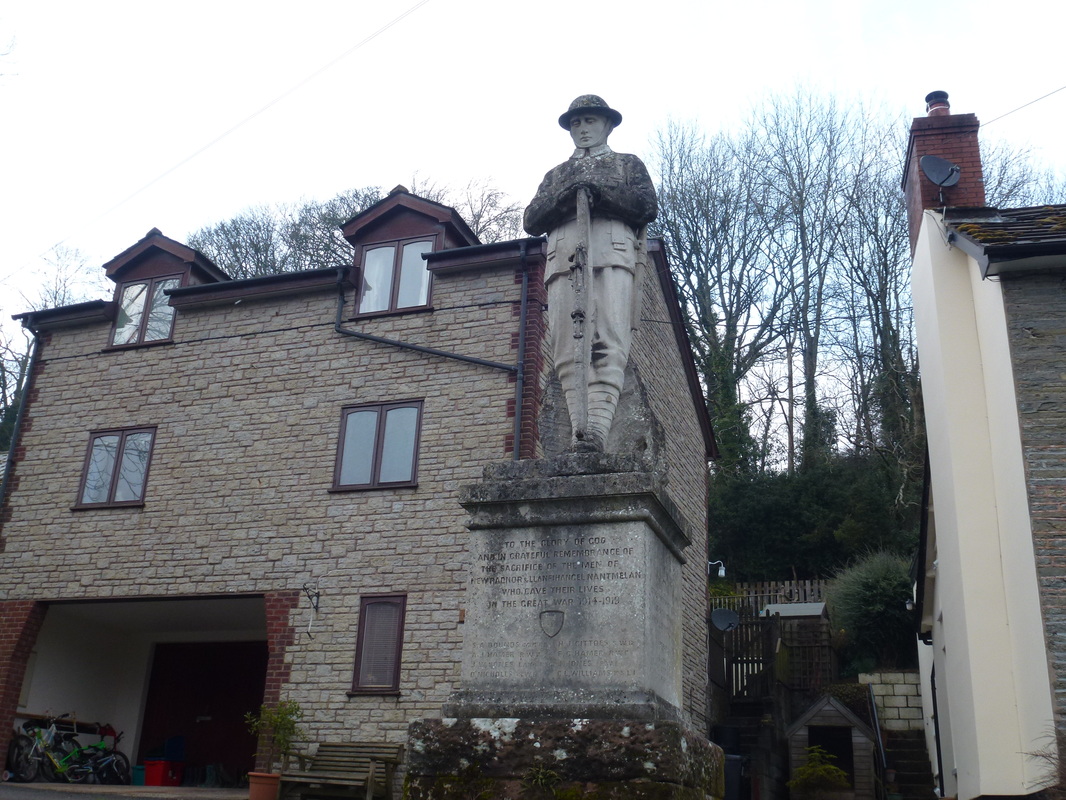 Lest we forget. The War Memorial in New Radnor 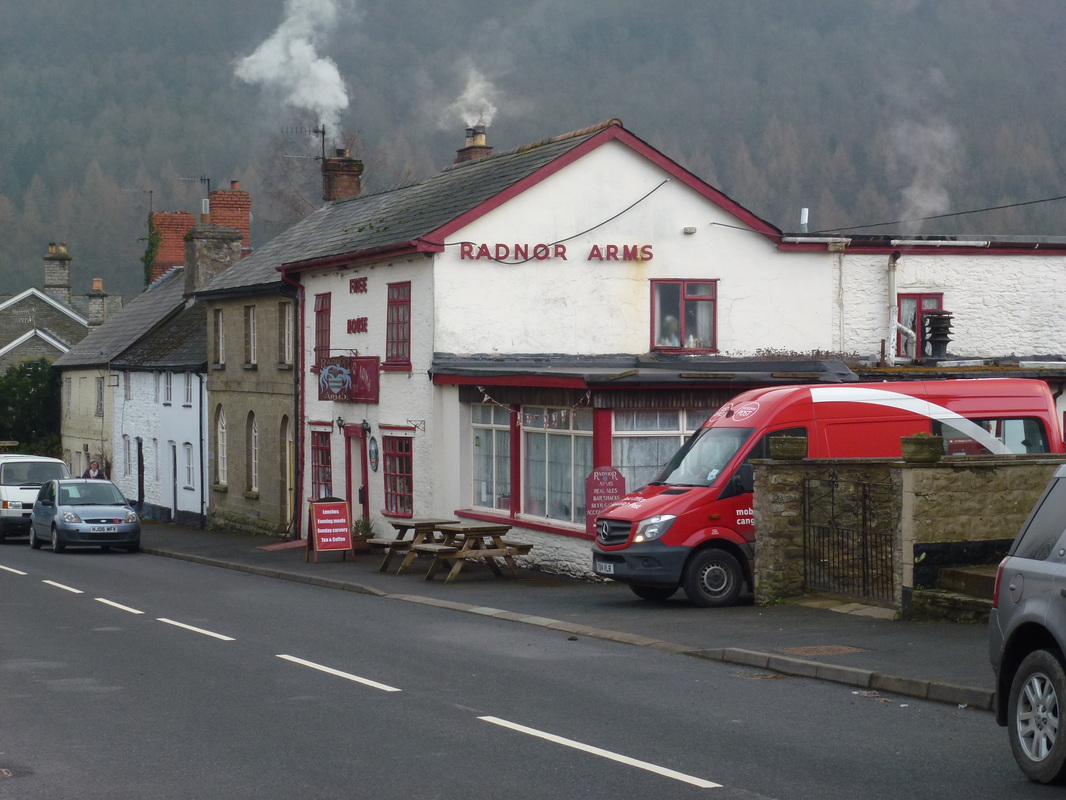