Good mountain paths for the most part. From Wetherlam Edge, instead of crossing Greenburn Beck via the footbridge at NY295023, we made our way down to the disused Mine Workings over rough ground from north east of Birk Fell Hawse. Although lacking a bridge, the beck is easily crossed here.

Gloriously sunny yet very cold.  Wind speeds of up to 40mph from Swirl How to Greenburn.​

Walkers
​
Dave, Ian Price & Chester the Sprocker
If the above GPX file fails to download or presents itself as an XML file once downloaded then please feel free to contact me and I will send you the GPX file via e-mail.  ​​ 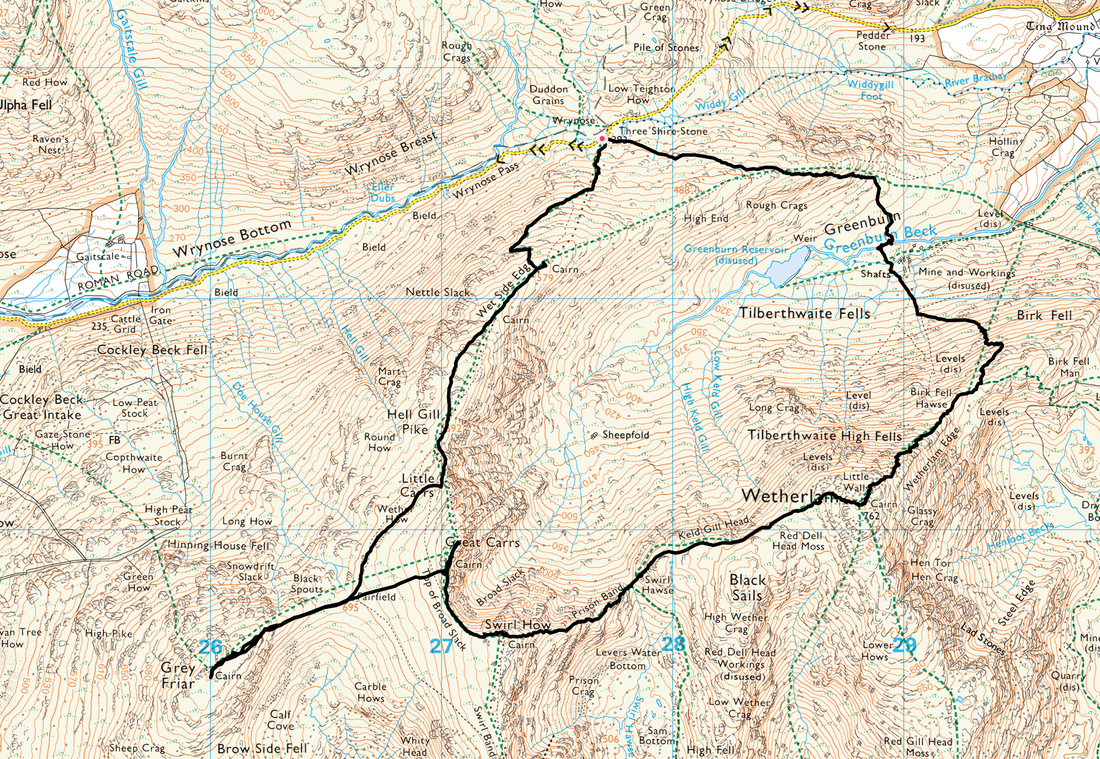 Today was Remembrance Sunday and what better way to spend it than remembering those brave people who have made the ultimate sacrifice. I was out with Ian & his Sprocker Chester today on a Lakeland Meet Ups walk - a shame it was just the 3 of us but no matter. With the promise of a good weather day, albeit with a blustery forecast for the afternoon we met up at the site of the Three Shire Stone on the Wrynose Pass (the stone is currently being repaired after someone hit it). The walk today would take us up Wet Side Edge to firstly visit Grey Friar then double back to Great Carrs where it was our intention to attend the 2 minute silence at the crash Memorial. From the Memorial we would then visit Swirl How & Wetherlam before descending to Greenburn via Wetherlam Edge to walk back to Wrynose via Rough Crags.

It was clear from the start that there were plenty of people out and about on the fells today and we were not alone as we made our way up the good path along Wet Side Edge where the views over to the Crinkles, Bowfell & The Scafells are just superb. Passing firstly Hell Gill Pike & Little Carrs we paused at the col of Fairfield to check whether we had the requisite amount of time to get out & back to Grey Friar in order to make the 2 minute silence on Great Carrs. We decided we had plenty of time and therefore headed up to Grey Friar to then come back on ourselves to reach the Memorial just below the summit of Great Carrs. It was good to see about 30 or so people gathered around the Memorial and as always it was a privilege to stand in silence and remember those people who had made the ultimate sacrifice for us all.

Leaving the Memorial it was a short walk to the summit of Great Carrs which grants a superb view of the walk ahead to Swirl How and we therefore made our way around the edge of the escarpment, soon arriving at the large cairn which adorns the summit. From Swirl How the route drops steeply over the rocky terrain known as Prison Band. Whilst not overly difficult, care should be taken on the descent of Prison Band, particularly if it is wet or icy - today we had a very strong gust which certainly got stronger from here. Reaching Swirl Hawse we then ascended steeply to reach Keld Gill Head where the gradient levels out to leave an easy transit over rocky terrain to arrive on the summit of Wetherlam - views aplenty here therefore hang around and take them in.

Having only ever departed Wetherlam by either Lad Stones/Steel Edge or to Swirl Hawse I was looking forward to making the descent over the unknown territory of Wetherlam Edge. The descent was on a stony path, similar to that of Prison Band and by this time the wind had really picked up and we were thrown about a bit therefore made the decision to get lower down as quickly as we could. To that end, once we were the northern side of Birk Fell Hawse we headed north west to make a beeline for the mine workings to the east of the disused reservoir at Greenburn. Once we were down on the valley floor the wind had eased markedly and we then crossed Greenburn Beck to negotiate a short boggy section before joining a path coming in from the east. It was now a simple case of heading steeply to Rough Crags to then make our descent back to the start on the Wrynose Pass. Another great day out in the Southern Fells. 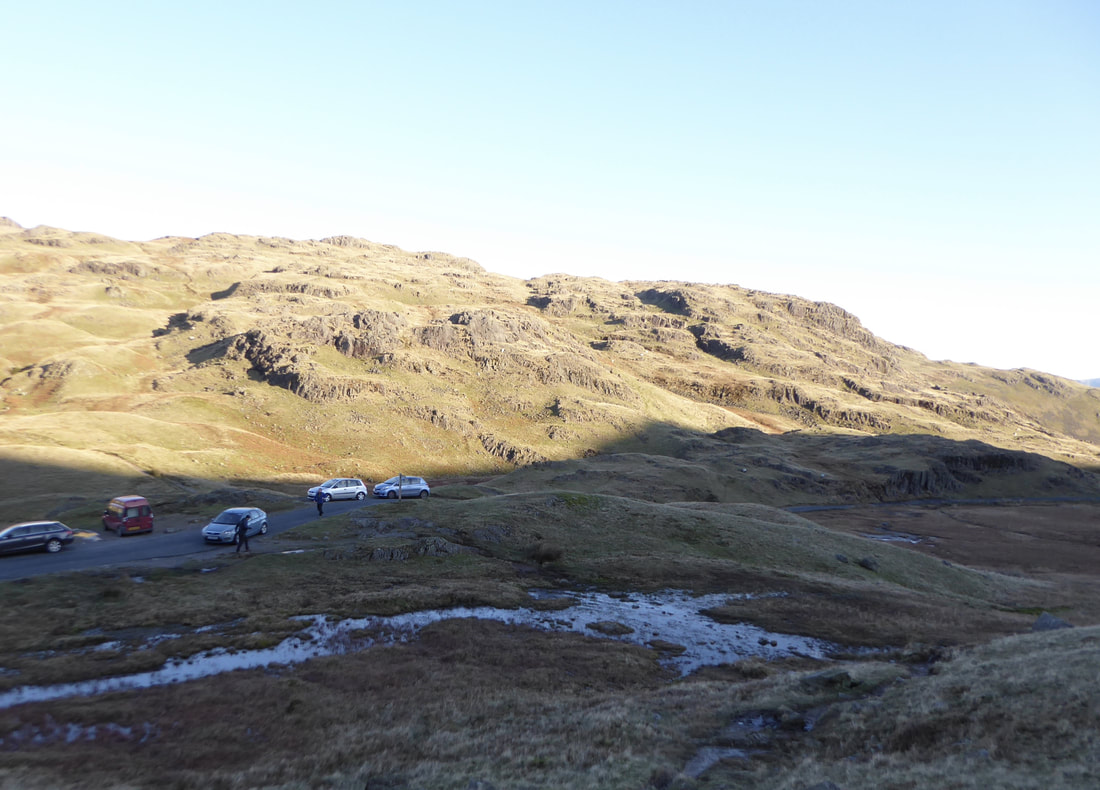 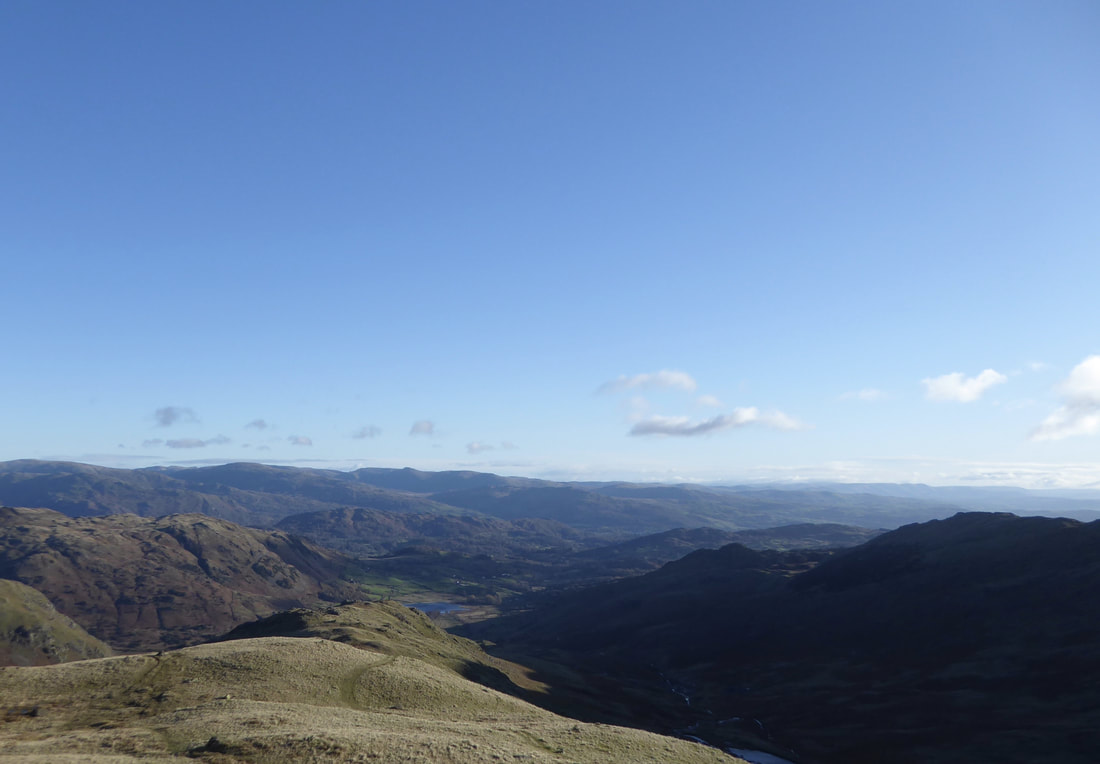 Up on Wet Side Edge looking back towards Little Langdale 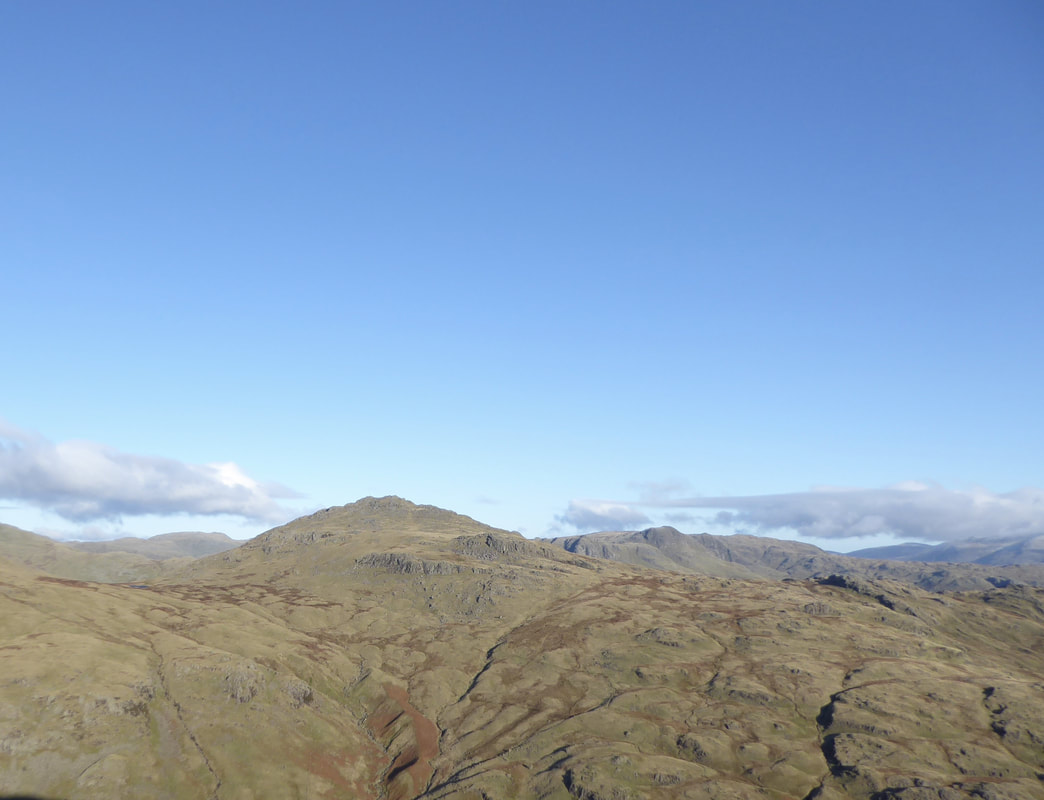 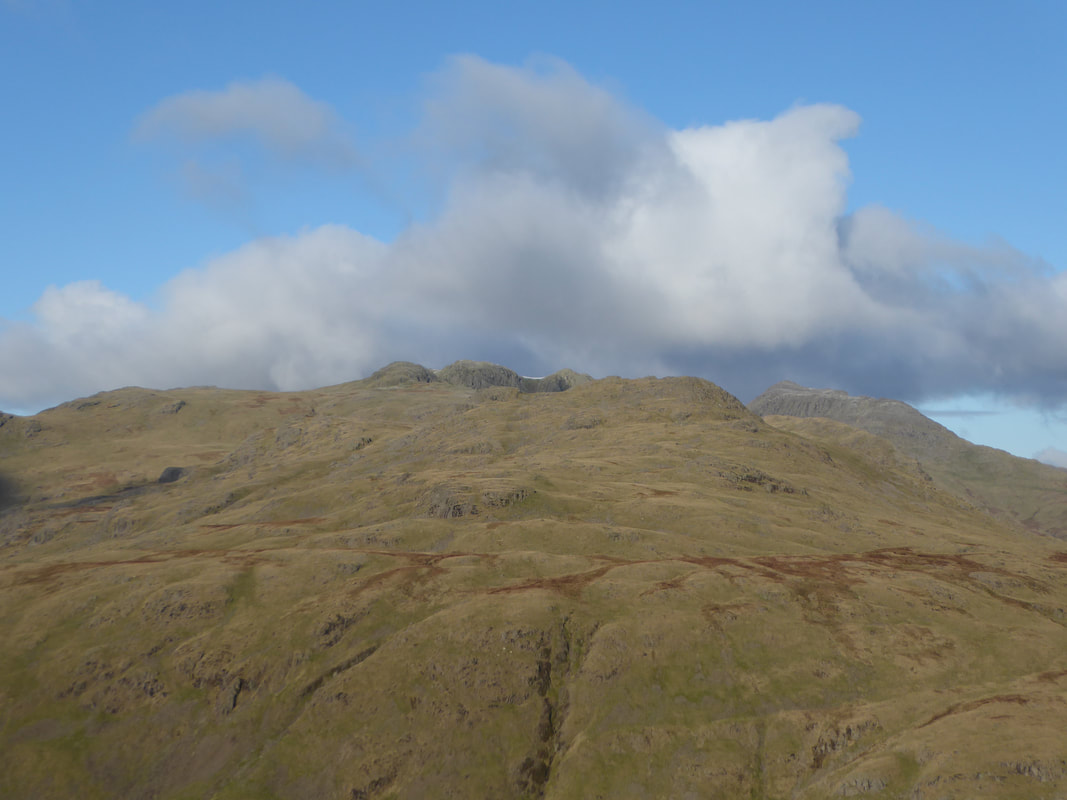 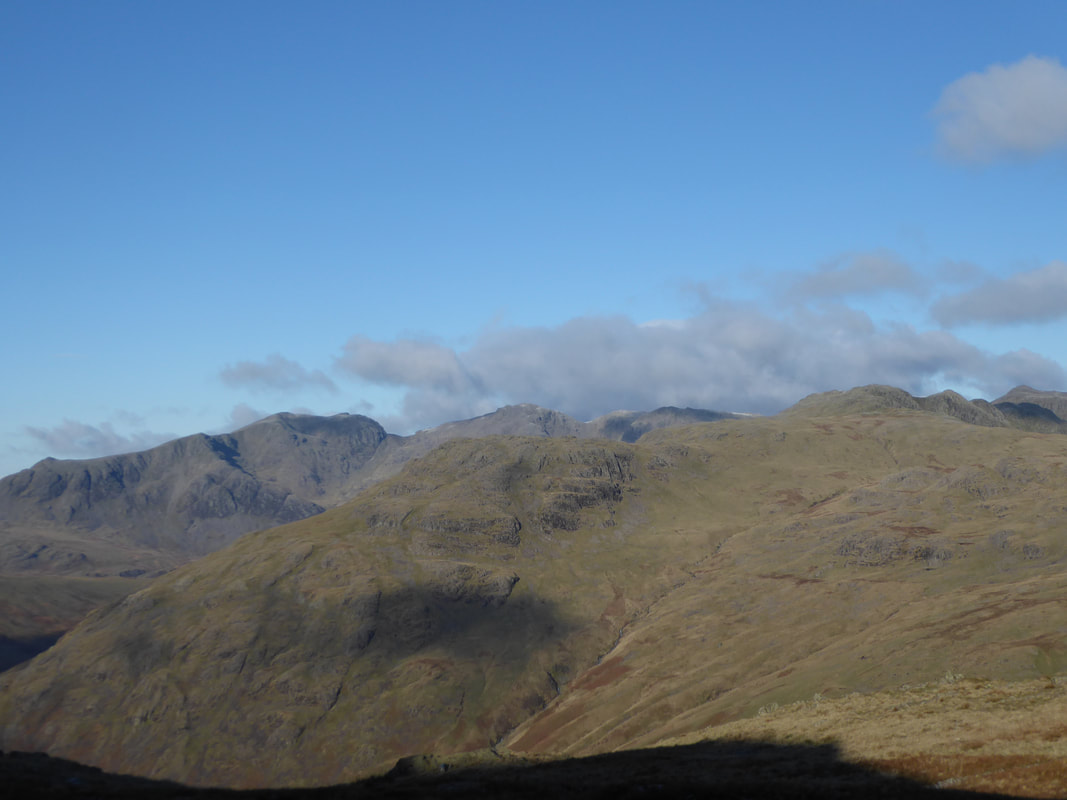 Looking over Little Stand to The Scafells, Crinkle Crags & Bowfell 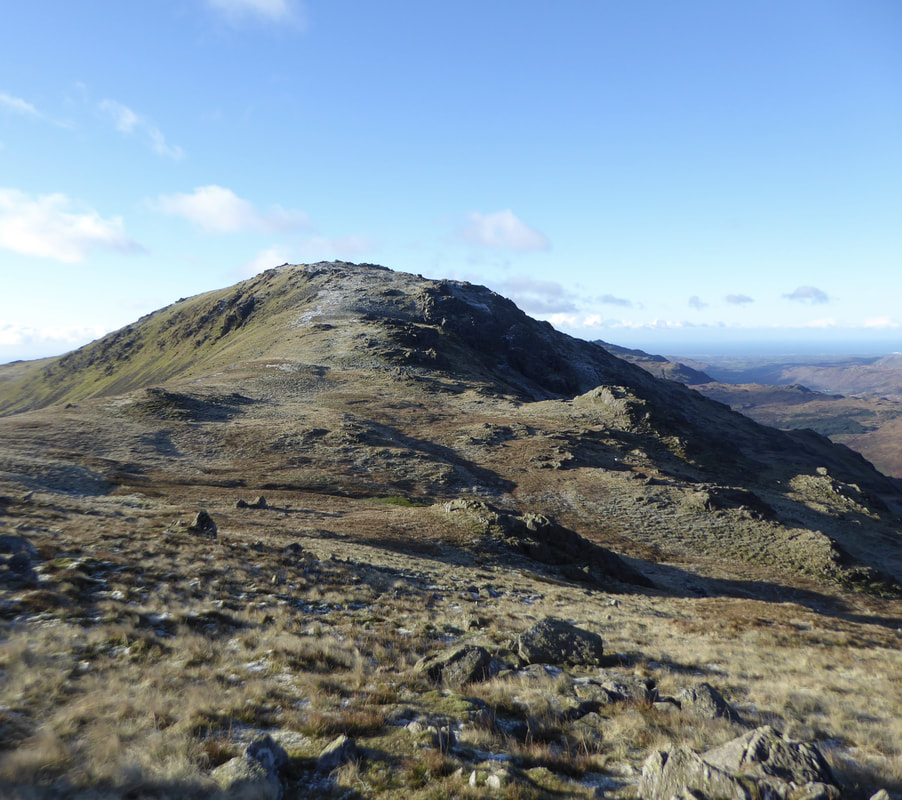 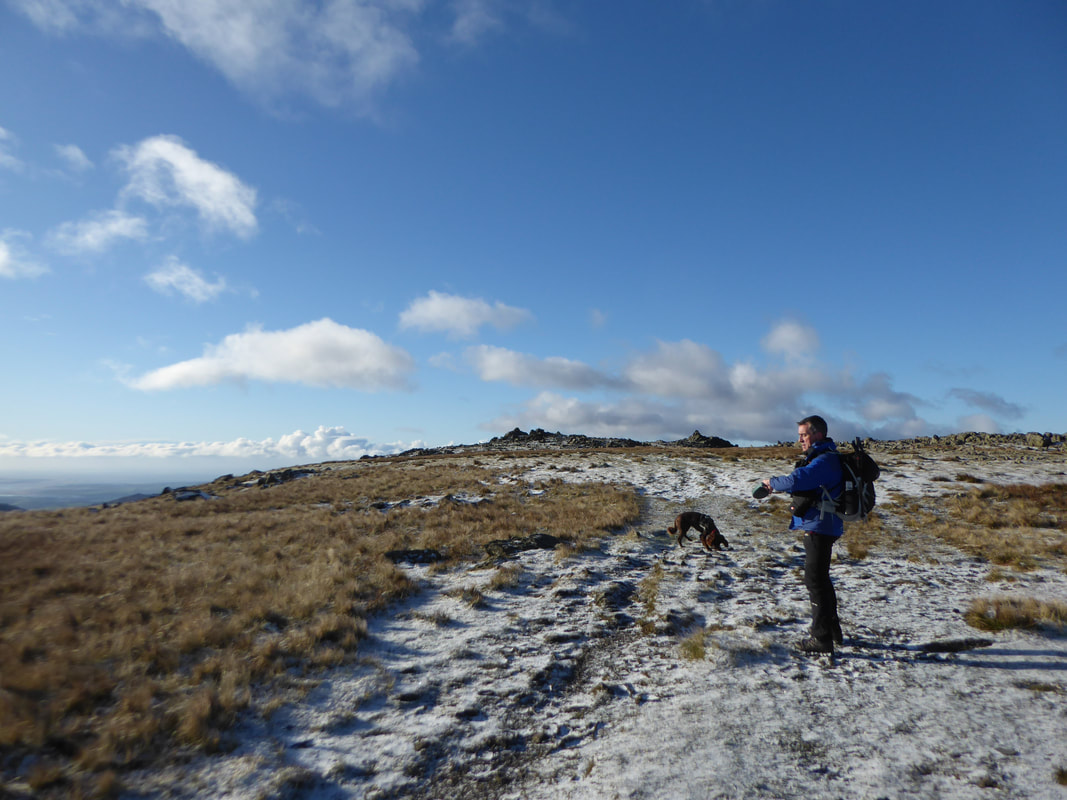 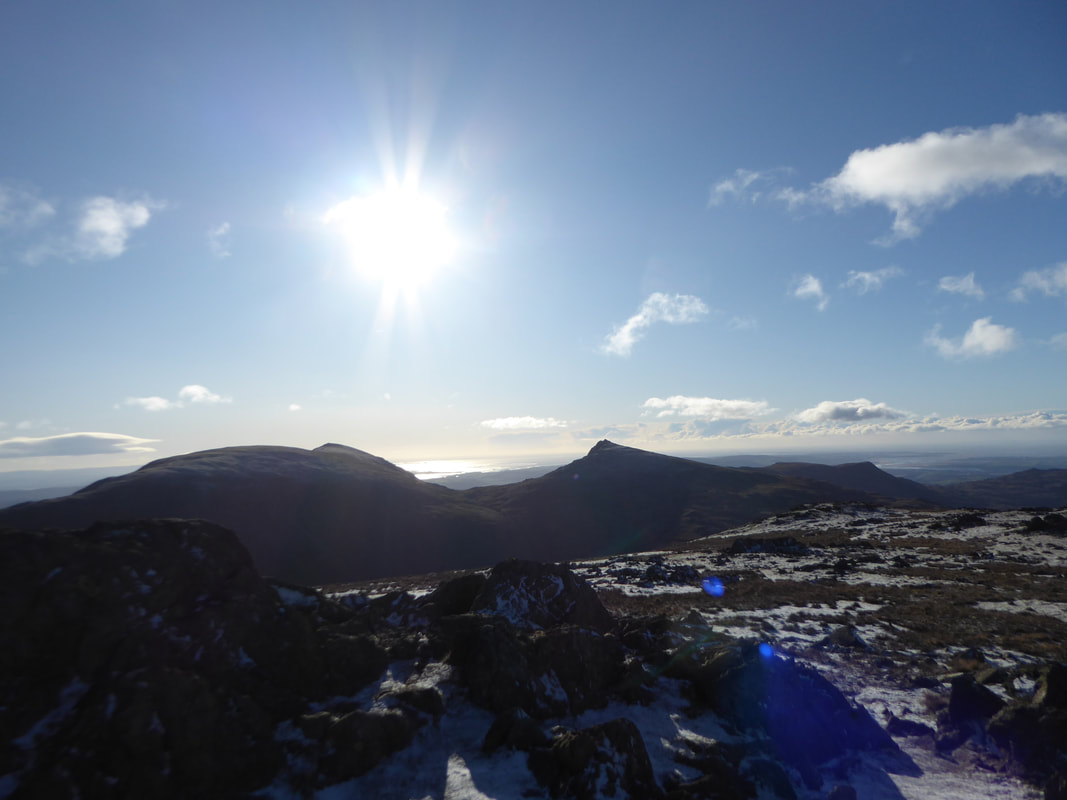 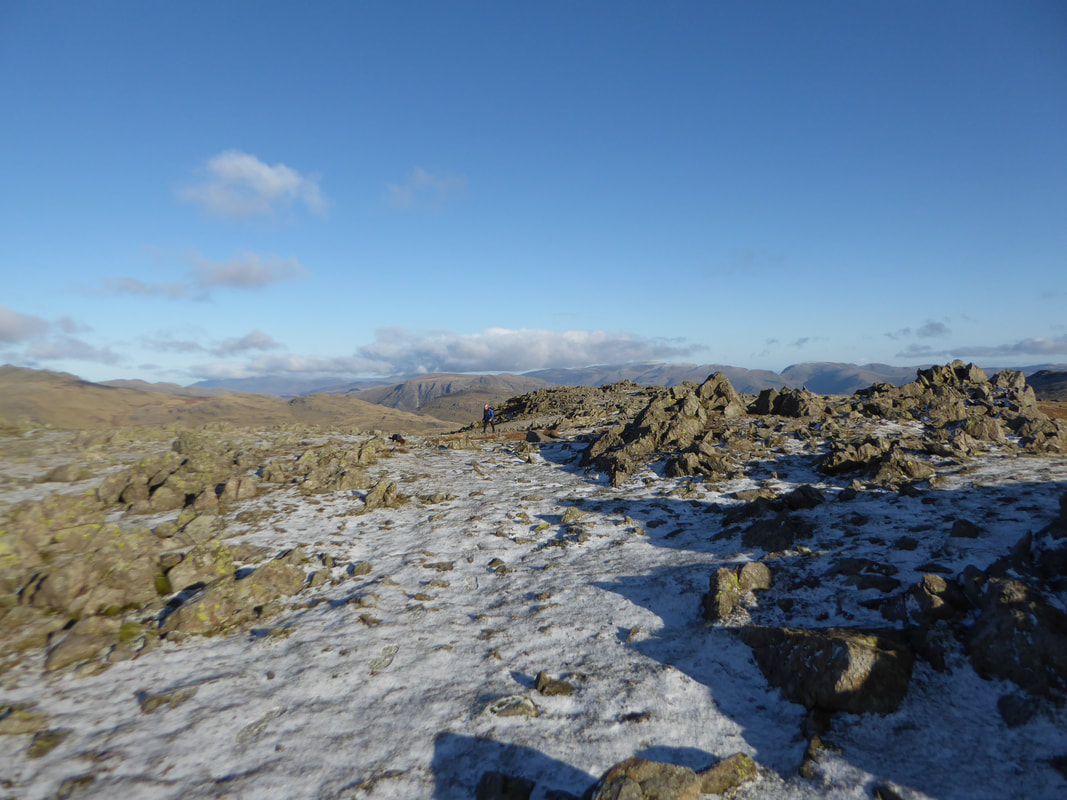 Up on the summit of Grey Friar 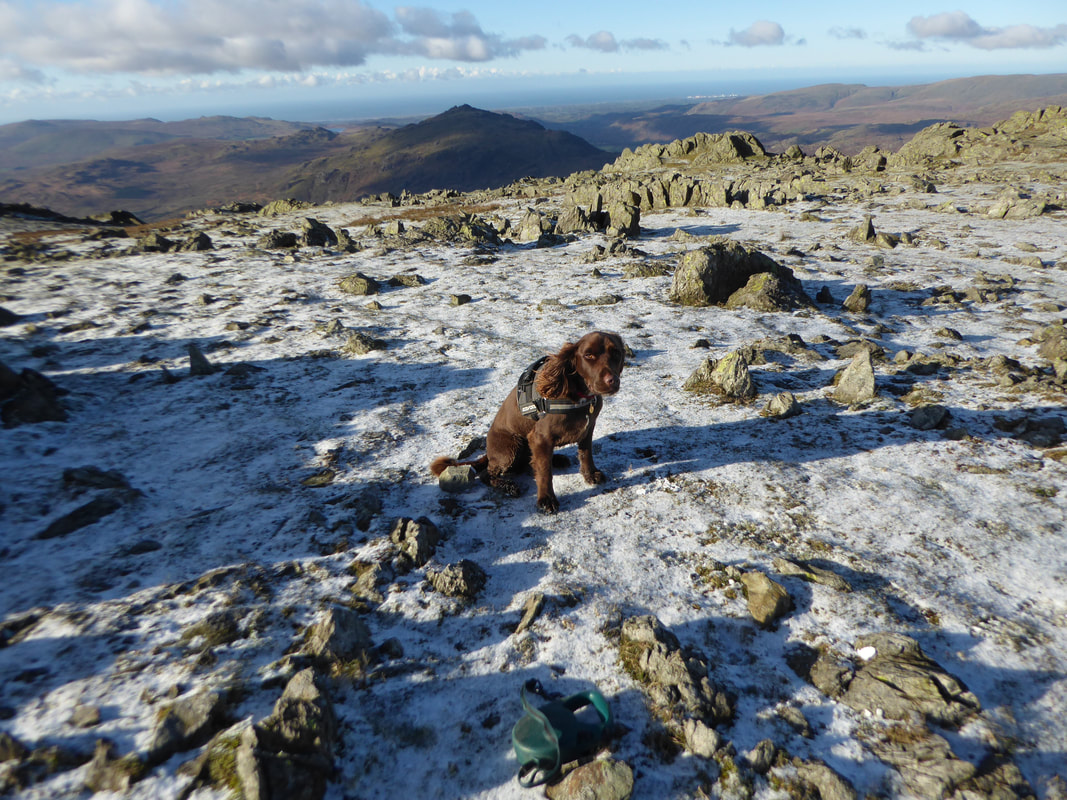 Chester on Grey Friar with Harter Fell to the rear 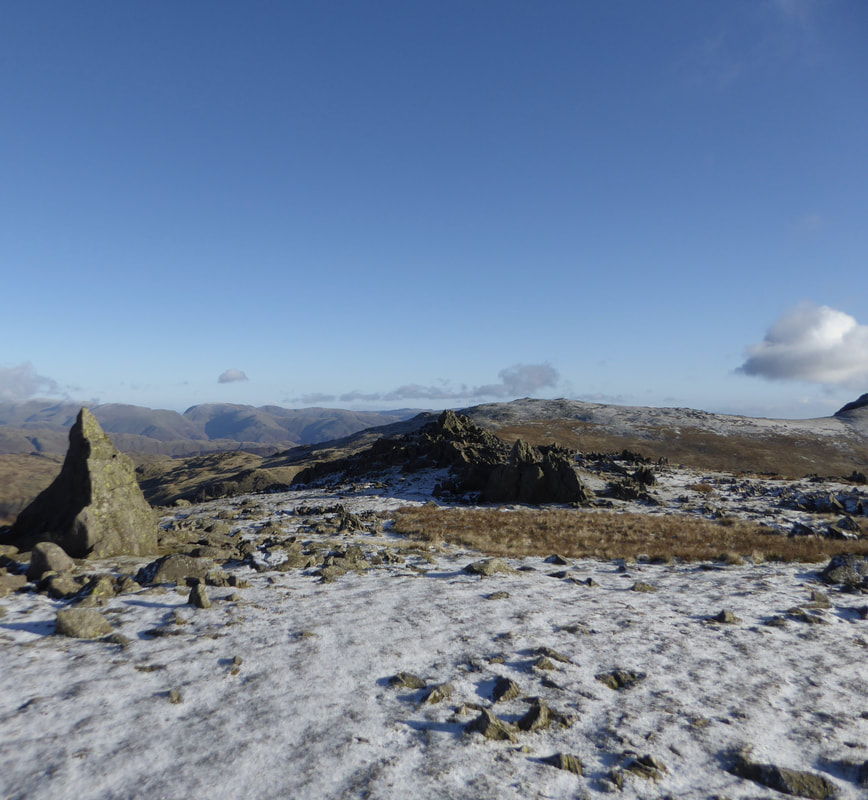 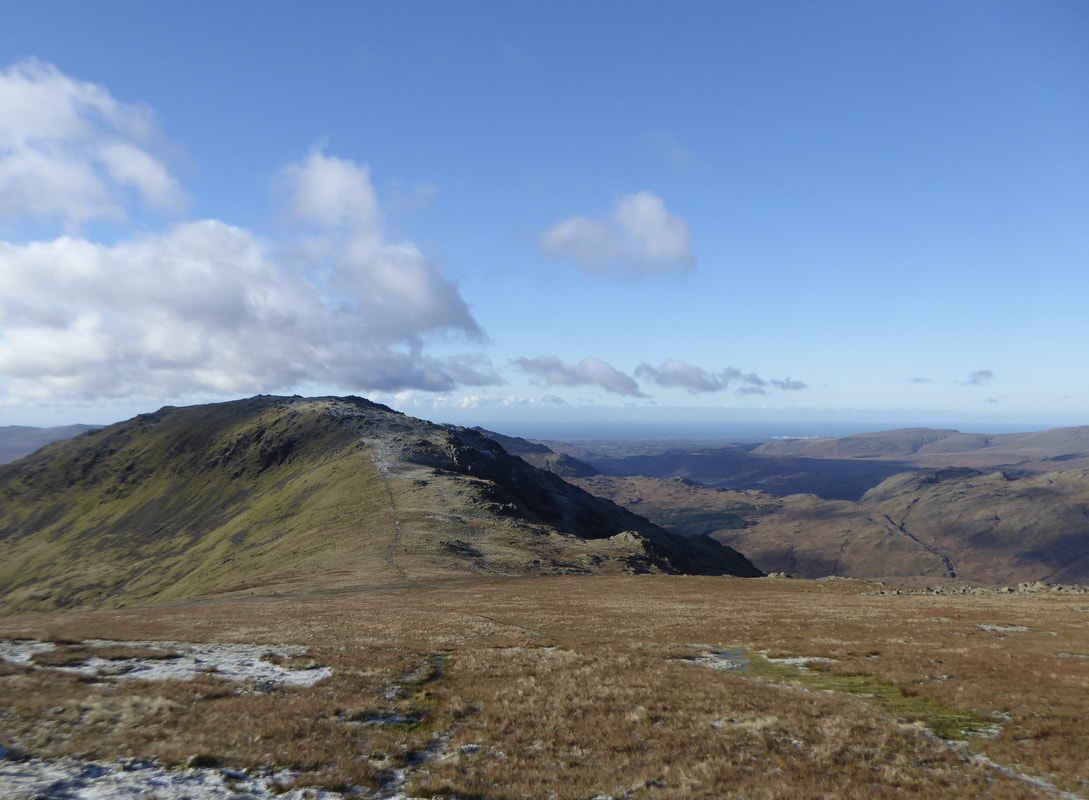 Looking back to Grey Friar from our ascent to Great Carrs 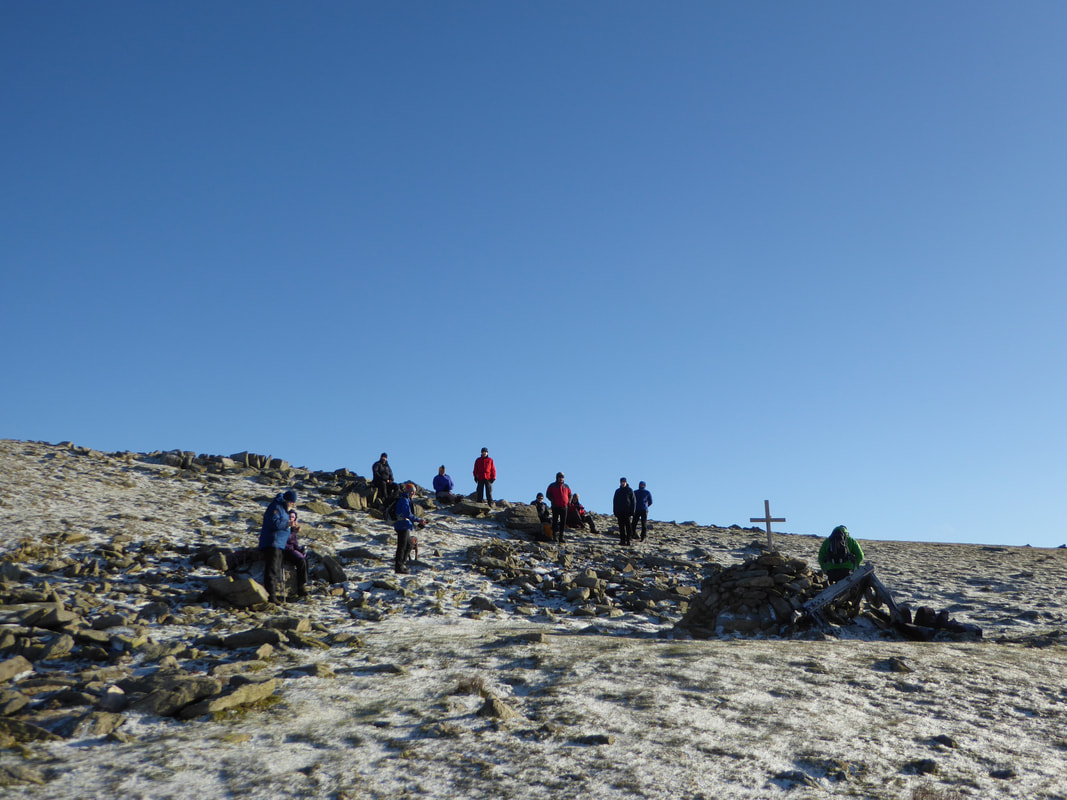 People gather for the two minute silence on Great Carrs 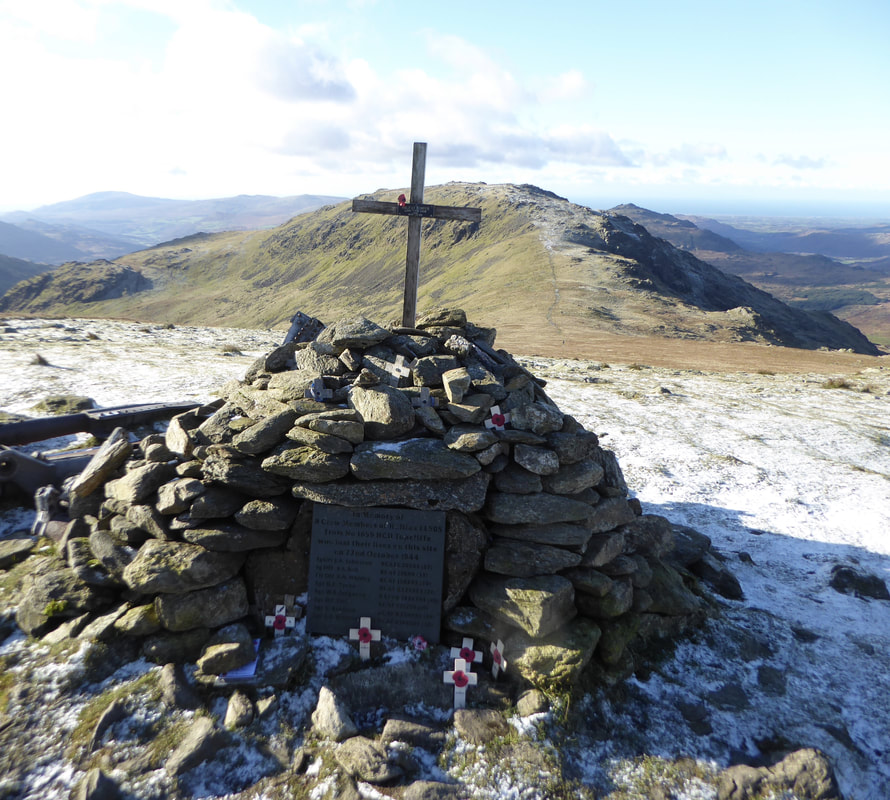 The memorial and wreckage on Great Carrs to the Canadian Bomber that crashed on the fell in 1944.  All 8 Canadian crew were killed in making the ultimate sacrifice - they shall never be forgotten. 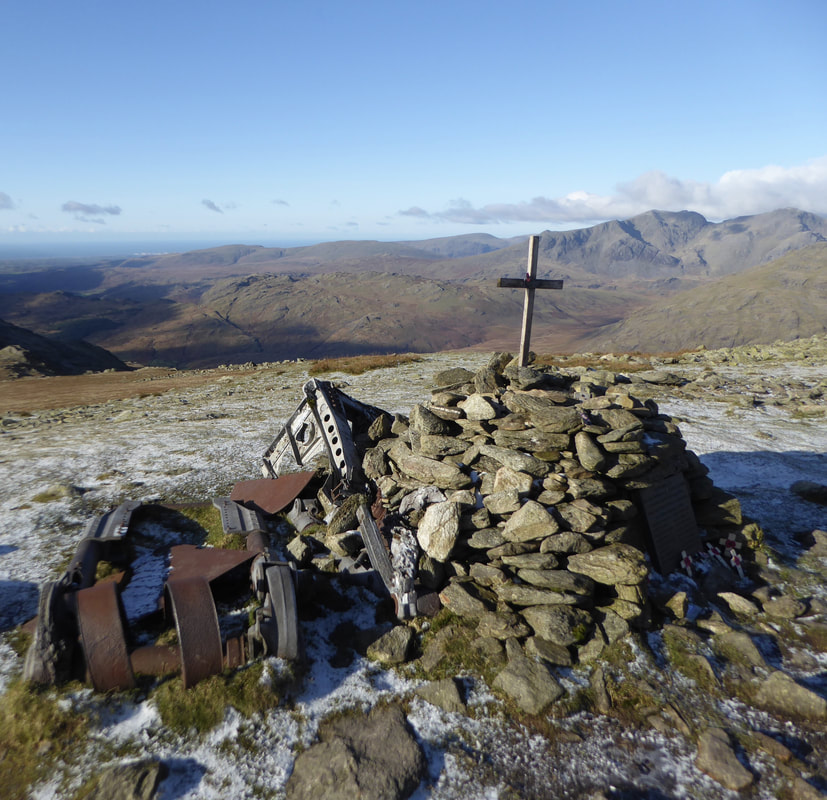 During a night time navigation exercise in 1944, the RCAF Halifax from RAF Topcliffe became lost in thick cloud while over the north west of England.  In an attempt to wait out the blanket of grey, they circled in hope the cloud would clear, ultimately becoming hopelessly lost.  To try to get a visual fix for the navigator, the pilot dropped the bomber out of the cloud base, with no knowledge of what was below him.  Unfortunately, they were greeted by the great rising fells of Swirl How and Great Carrs.  With no time to react, the aircraft hit the mountainside killing all on board.  Despite the crew perishing in the impact, the bomber remained largely intact and, to prevent other aircraft from spotting it and reporting it repeatedly, the wreckage was cut into a number of smaller, moveable pieces and discarded down Broad Slack, where parts of it are still visible today.  Over the years, two of the four Rolls-Royce engines were recovered from the crash site by an RAF helicopter, one of which is now on display at the Ruskin Museum in Coniston. 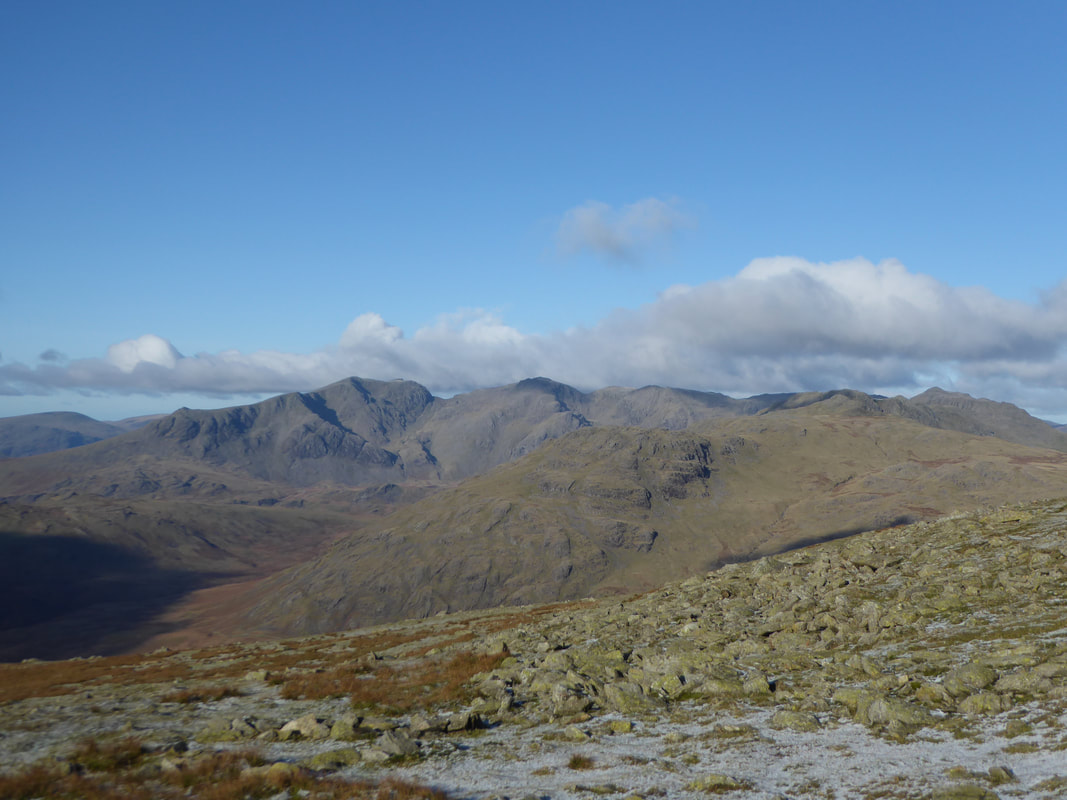 The Scafells, Crinkle Crags & Bowfell from the summit of Great Carrs 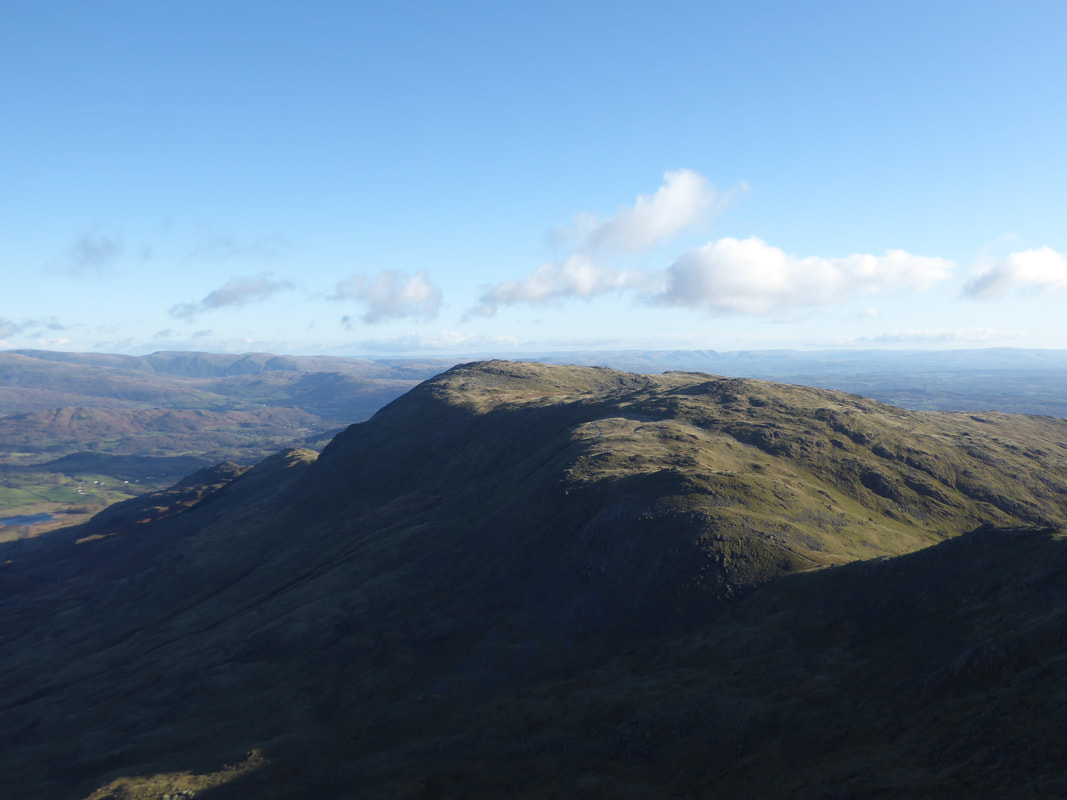 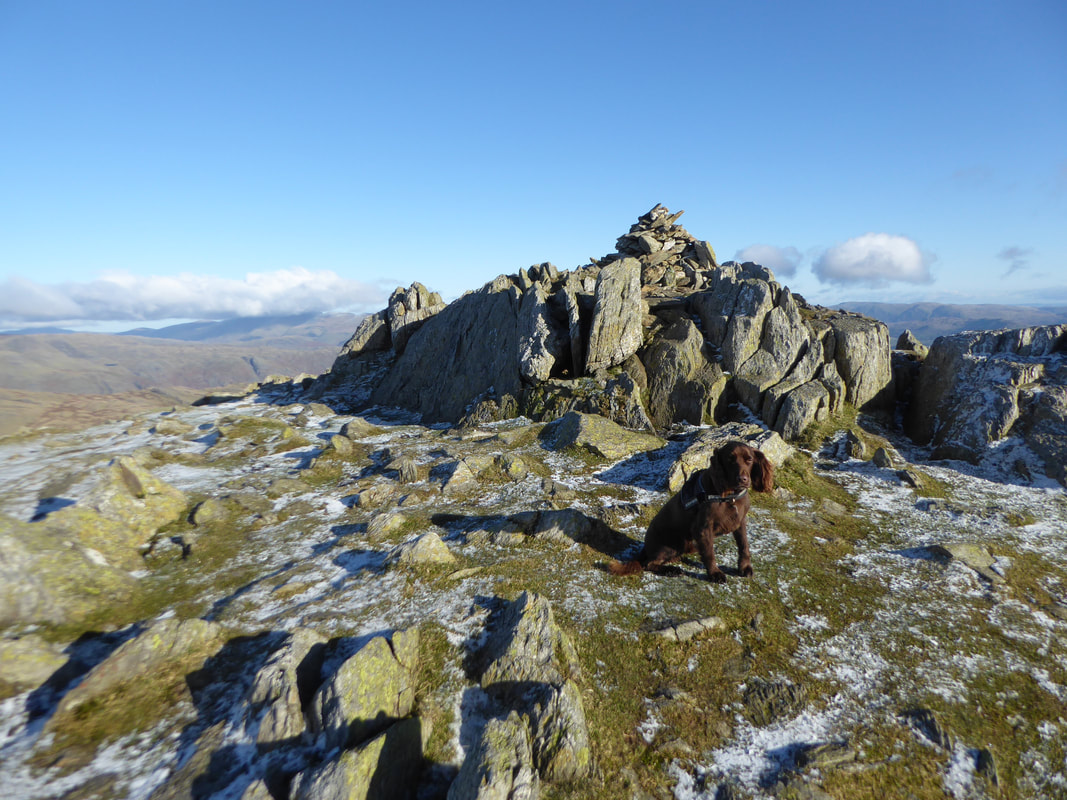 The summit of Great Carrs 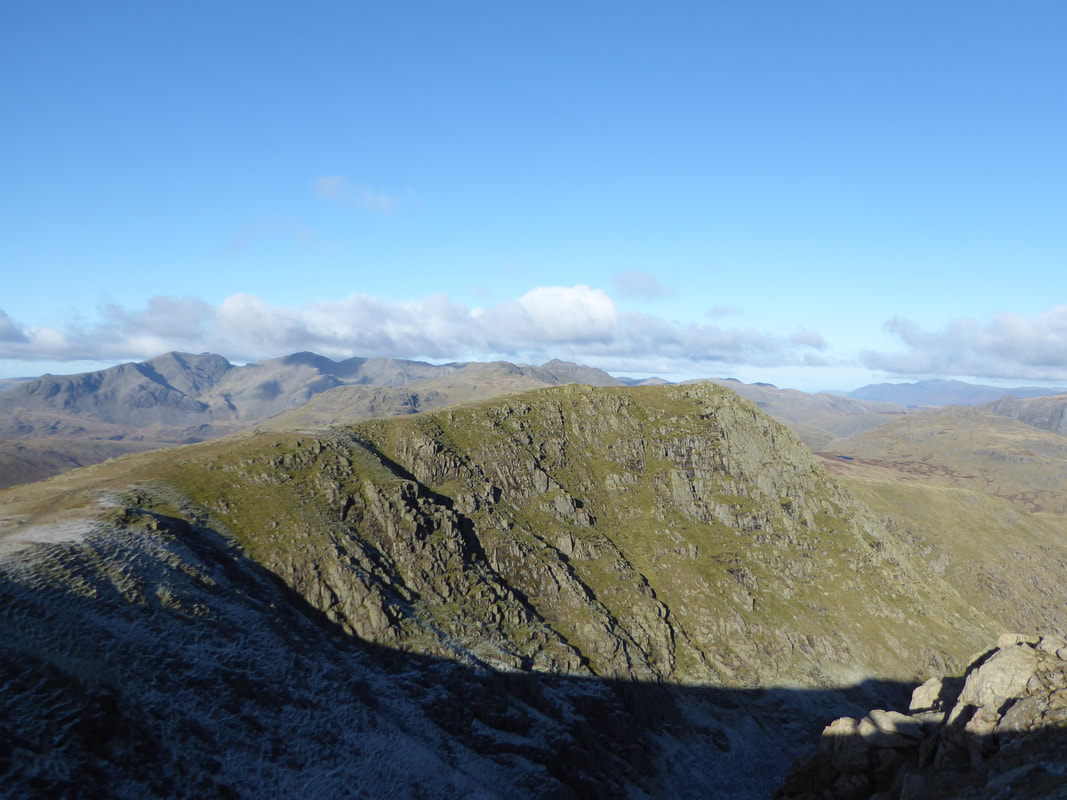 Looking over to Great Carrs from the ascent to Swirl How 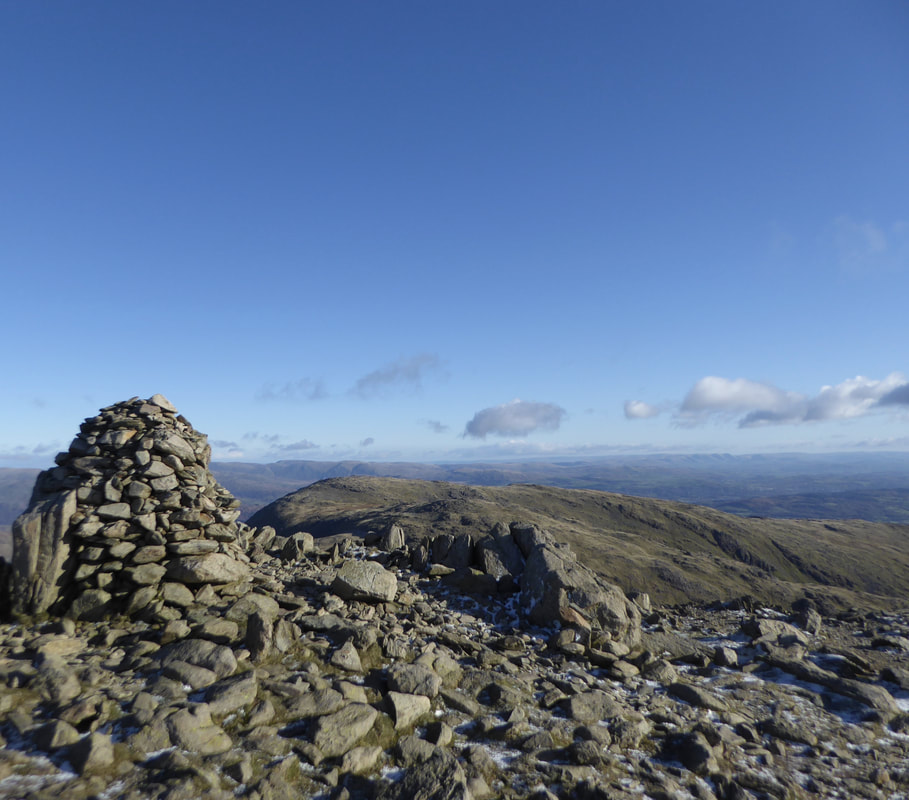 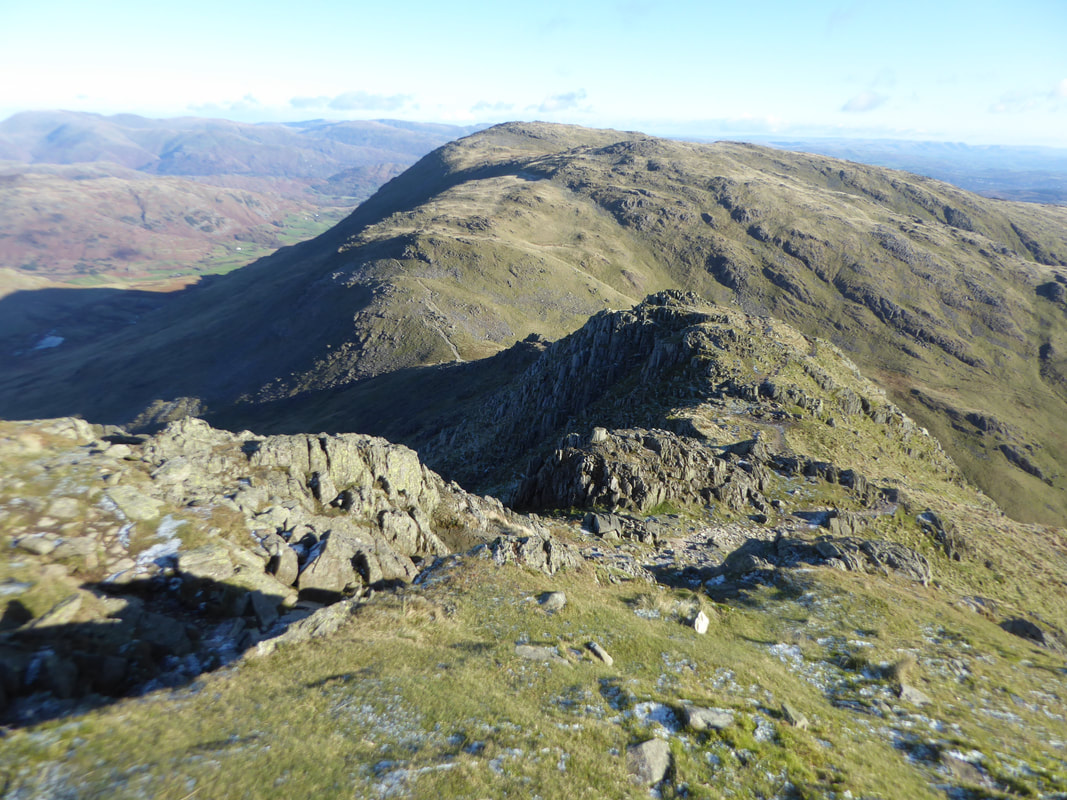 Descending Prison Band to Swirl Hawse before the ascent to Wetherlam 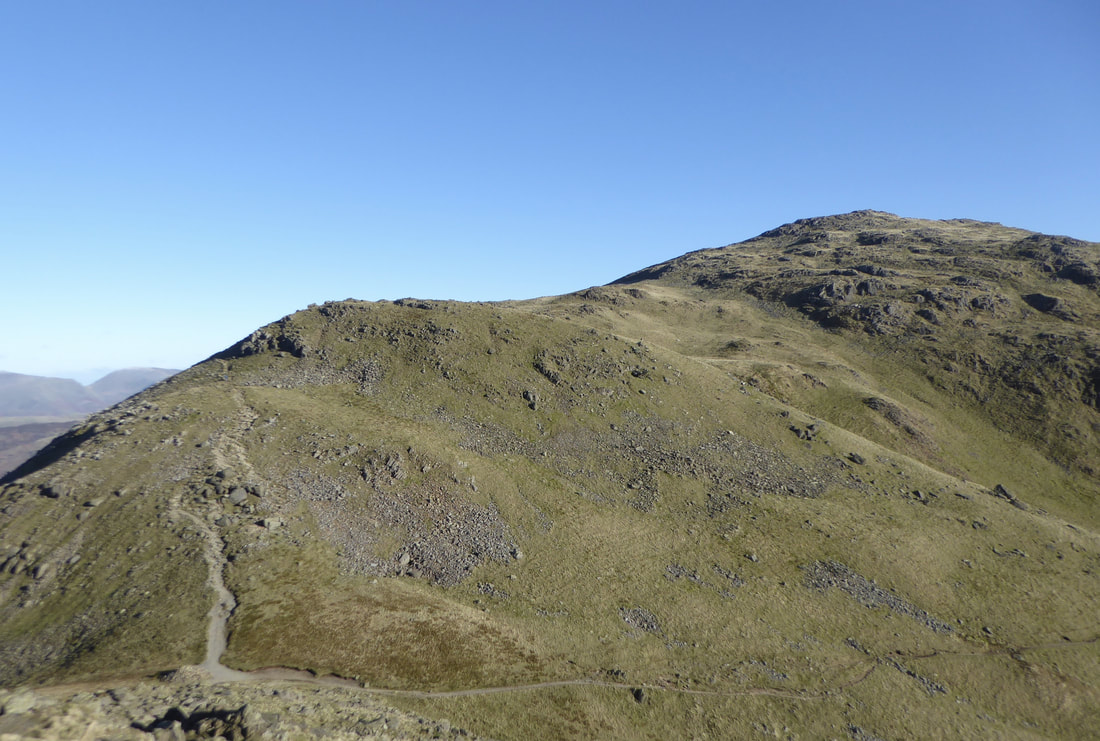 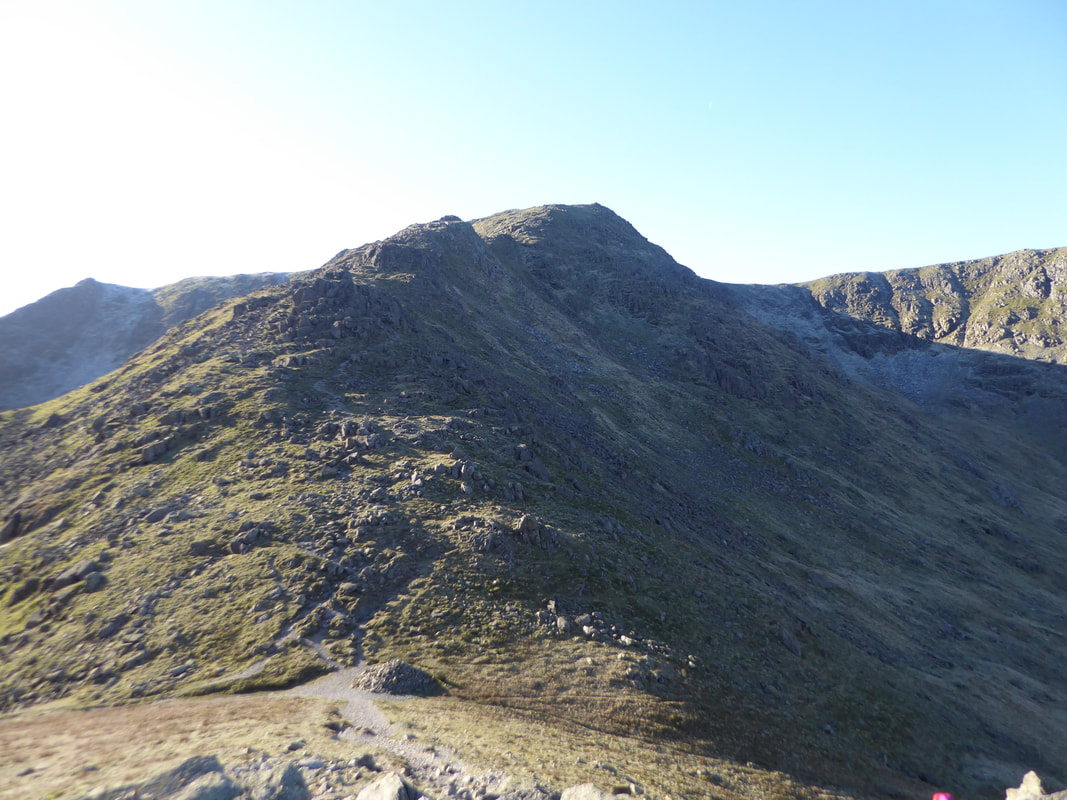 Looking back up Prison Band 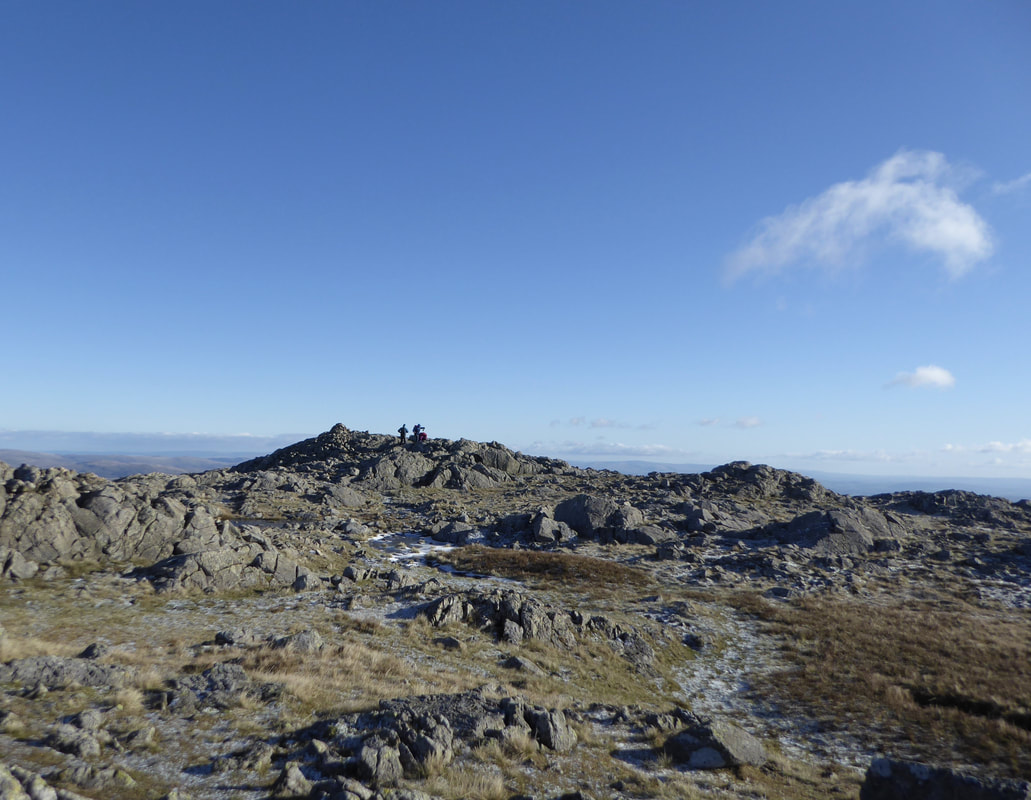 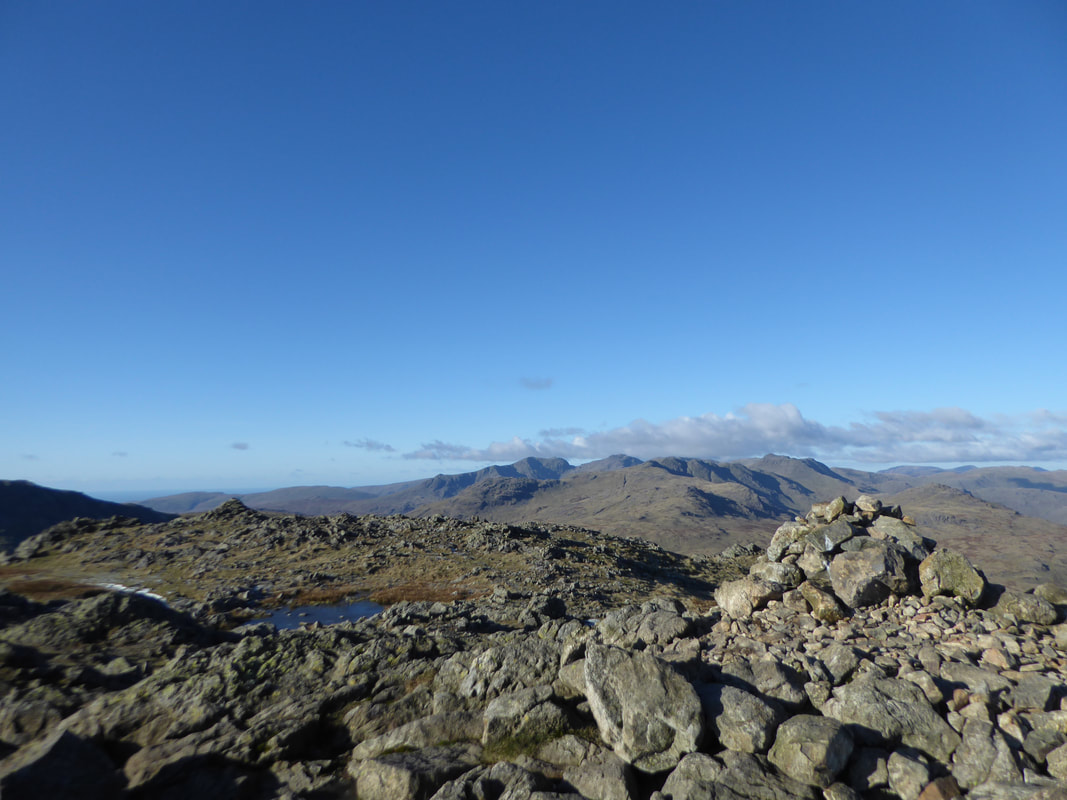 The view over towards The Scafells from Wetherlams's summit cairn 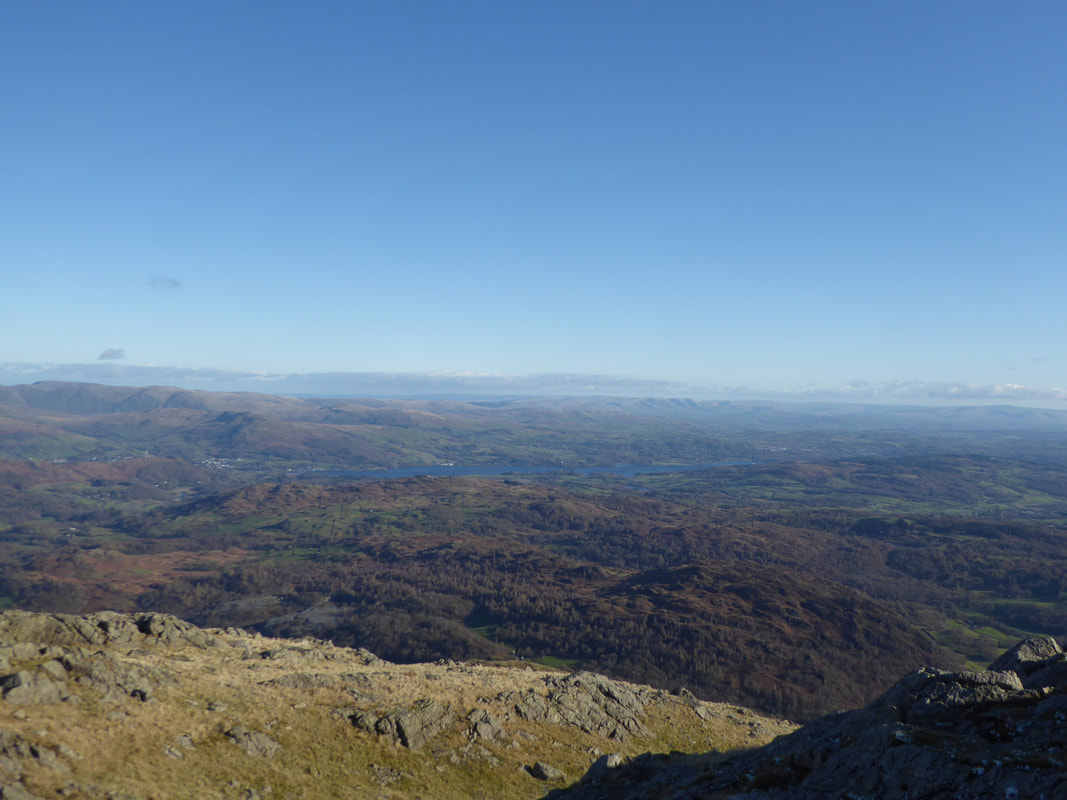 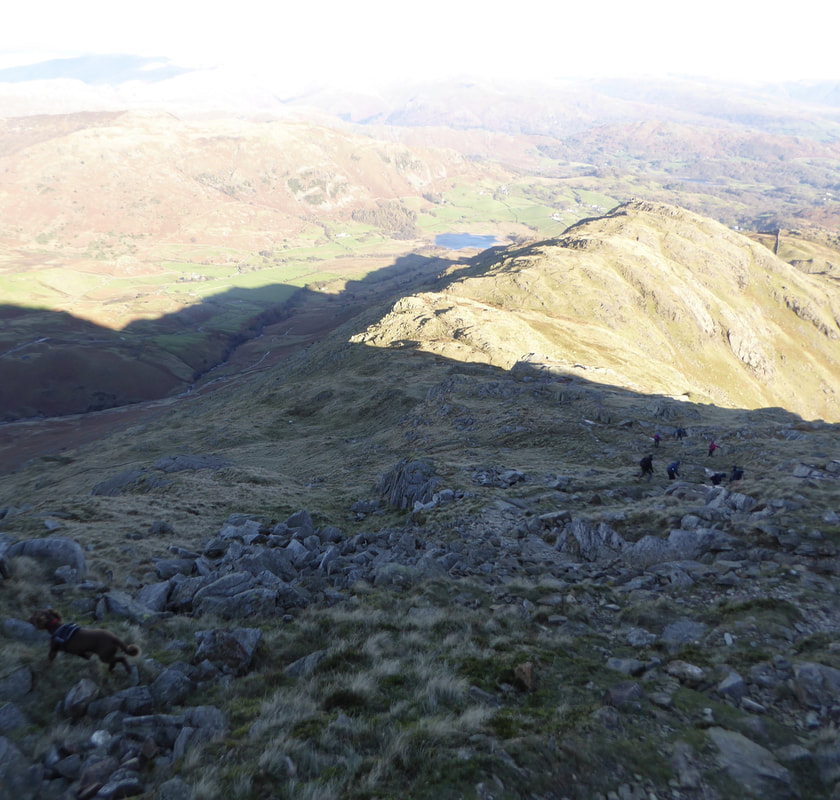 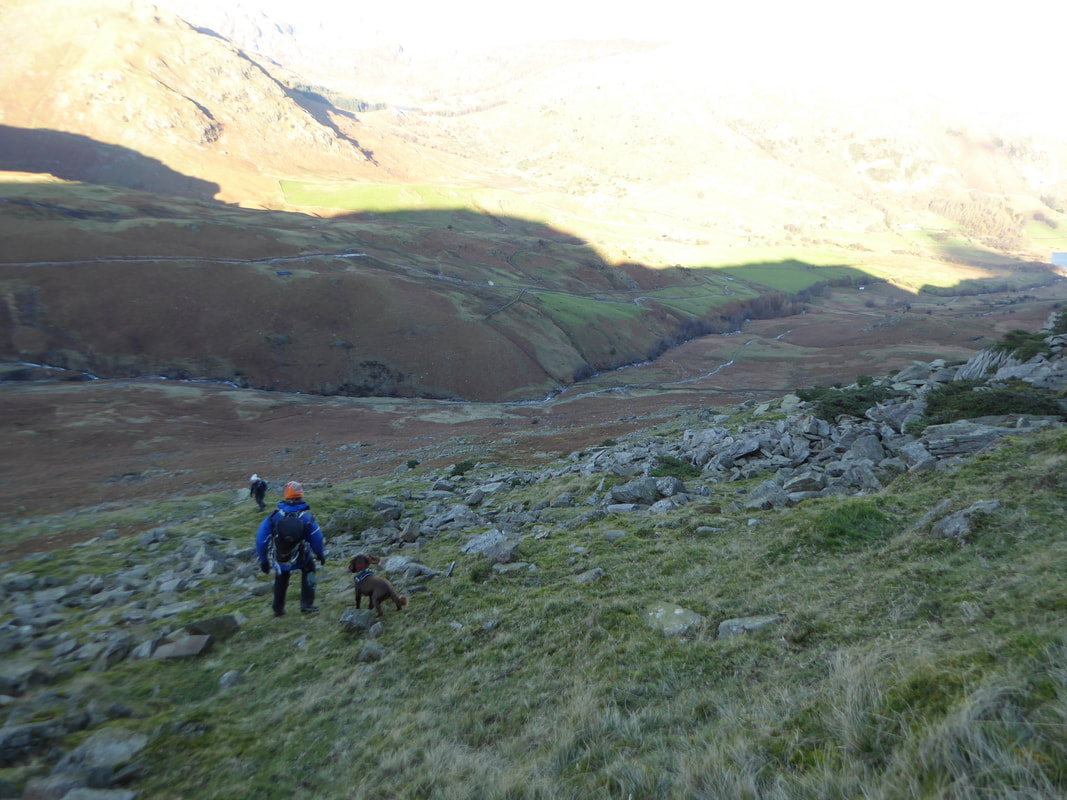 Making our descent to the Mine Workings 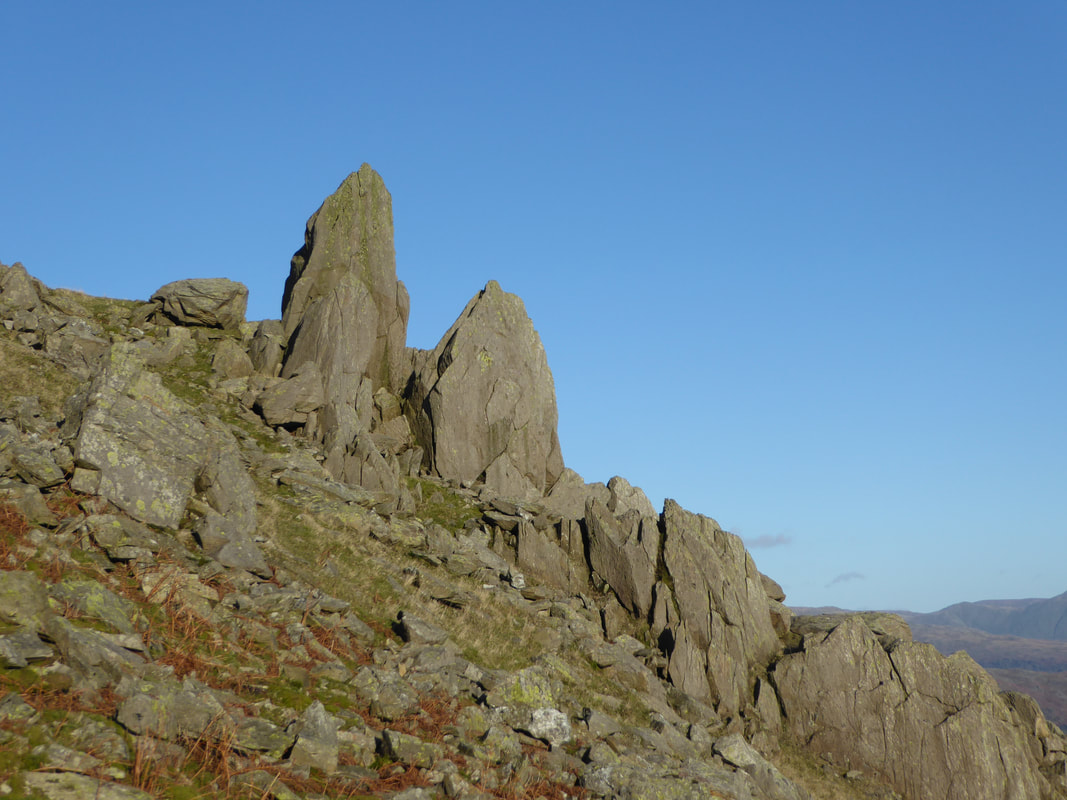