Mild in the valleys with fresh breezes.  Patches of sunshine. 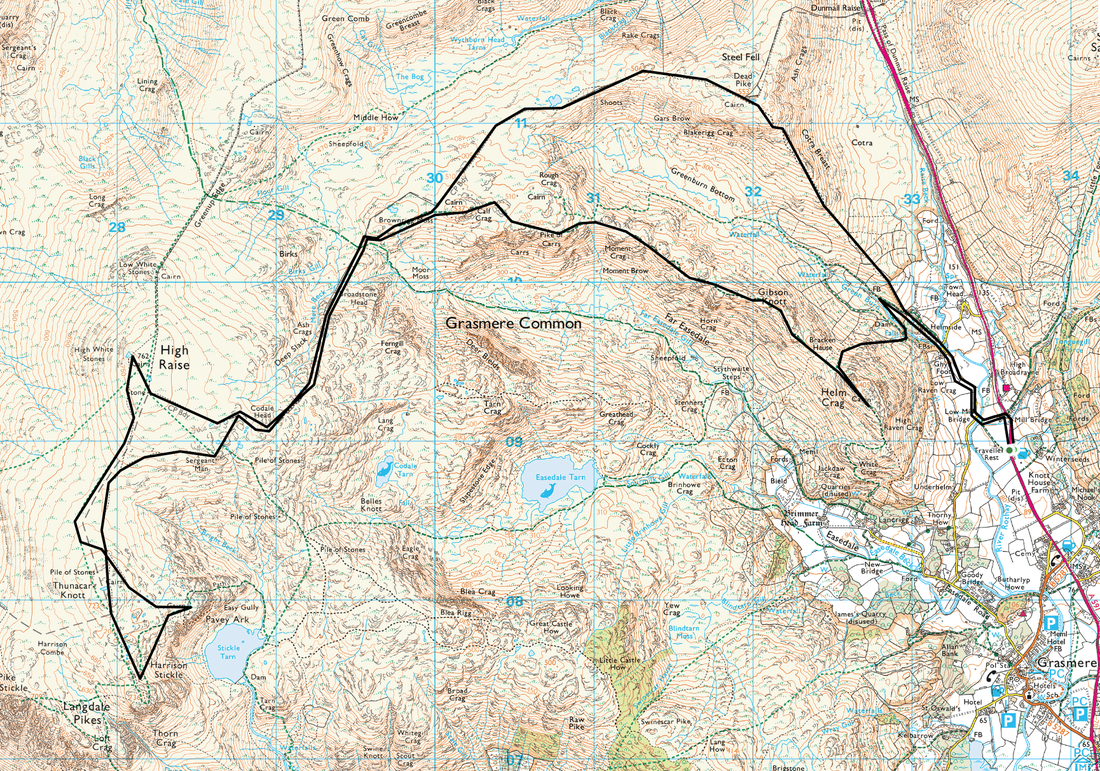 As walks go this has to be one of our very favourites. At just over 14 miles and with nearly 4400 feet of ascent it is hard work and we felt knackered at the end but for sheer enjoyment it was a fantastic day out.  We parked the car at The Travellers Rest pub on the A591 just north of Grasmere. They do not mind you parking in their car park as long as you inform them beforehand and that you pay £5 which is redeemed in the bar afterwards - seems fair enough. Either that or park just up the road near Mill Bridge.

The walk heads up to Ghyll Foot and on to a junction of paths where you keep right for Steel Fell and head up the fell side to eventually reach the summit. There are 2 Cairns here and the large Cairn (West Cairn) on Dead Pike is the true Summit of the fell. From the Summit we made our way around the head of Greenburn where we bumped into 4 people doing the Coast to Coast who seemed unsure as to where to go. Pointed in the right direction by Dave there then ensued a domestic argument between all 4 of them - we left them to it. We then headed over Brownrigg Moss to Ash Crags and Codale Head where we climbed up to the summit of Sergeant Man.

The visibility throughout the day was good therefore from Sergeant Man it was easy to see the route ahead and we could make out the path over to Thunacar Knott. It was then a short pull up to the summit of Harrison Stickle where there is a superb view over to Pike O'Stickle and beyond to Crinkle Crags and Bowfell. There is a jumble of paths over to Pavey Ark but in good visibility it was easy to see our route over to the rocky summit - again there were really good views from here, particularly down to Stickle Tarn. We then made for Thunacar Knott again but followed the path around to the right and picked up the obvious path to the summit of High Raise. There were two routes to Calf Crag at our disposal - we could either follow the path down over Greenup Edge to Low White Stones and turn right above Lining Crag or follow the path east to Codale Head and then north to the path junction near Brownrigg Moss - we chose the latter. By this time the weather was improving markedly and the sun was out as we made our way over Calf Crag, Gibson Knott and Helm Crag.

The descent off Helm Crag was tough on the knees particularly after such a long walk but this was such a good day on the fells that it was all worth it. Back down, we redeemed our £5 at the Travellers Rest with a nice cool drink.

Lots of photographs but it was a long walk!!!​ 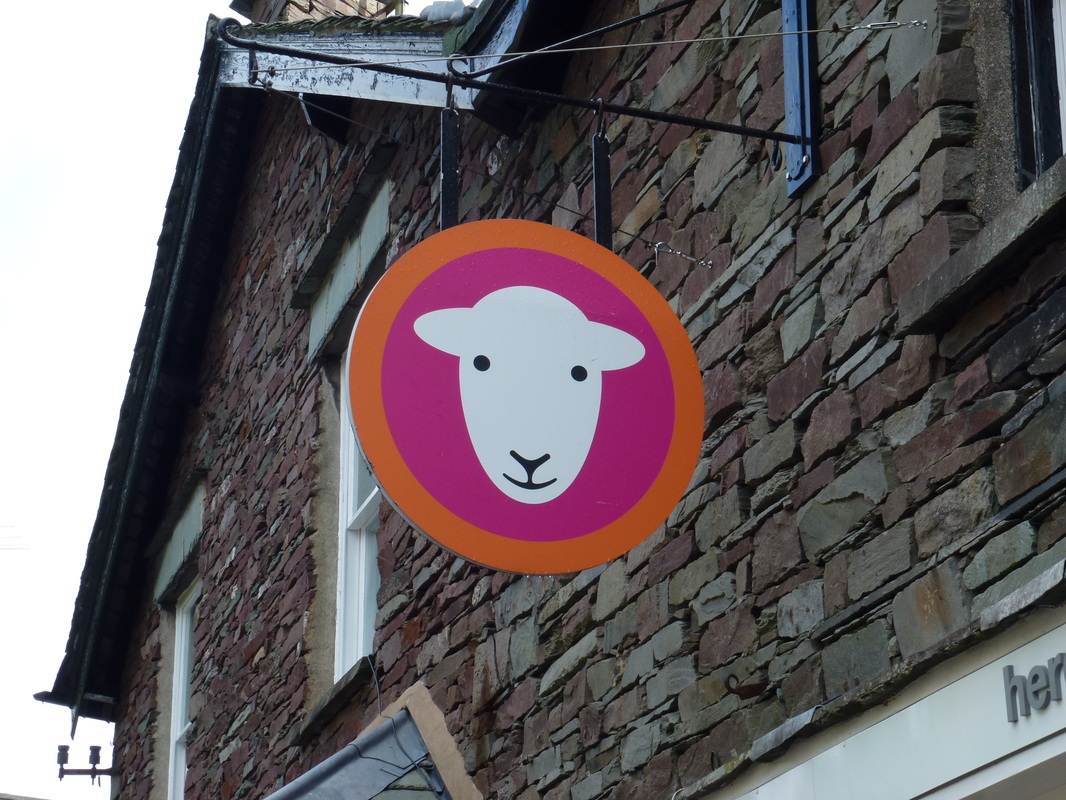 Uh oh, its The Herdy Shop in Grasmere!  There was money to be spent in here! 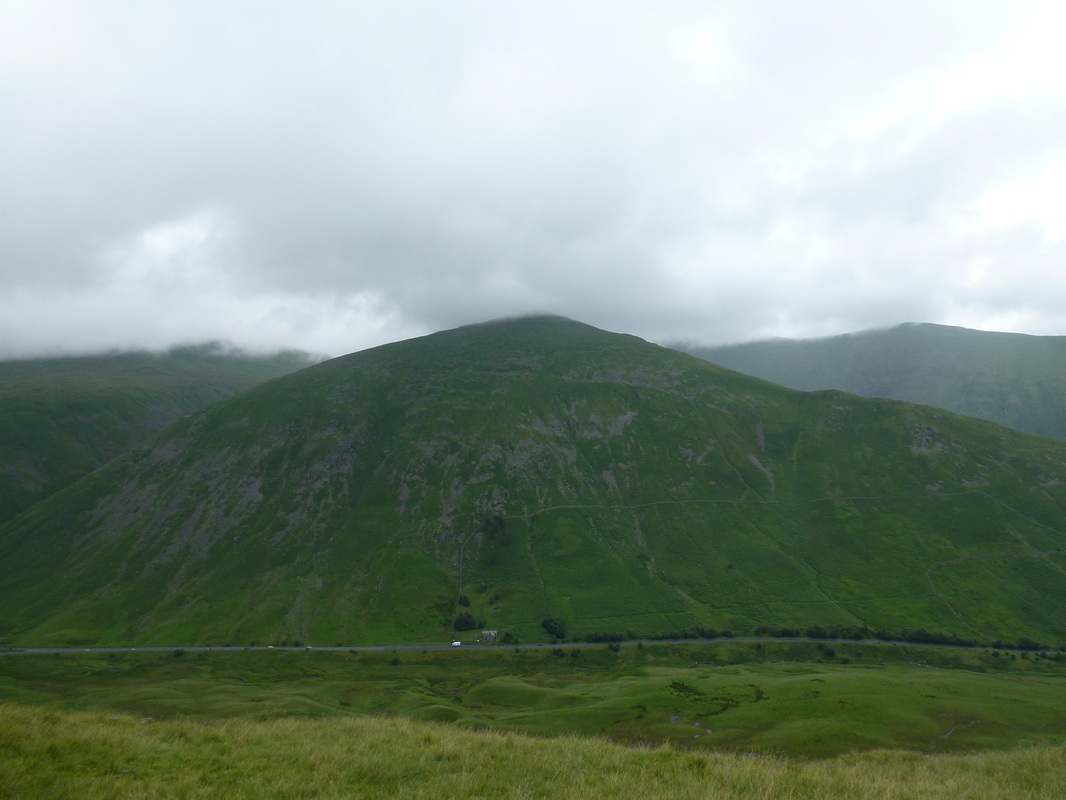 Seat Sandal across the A591 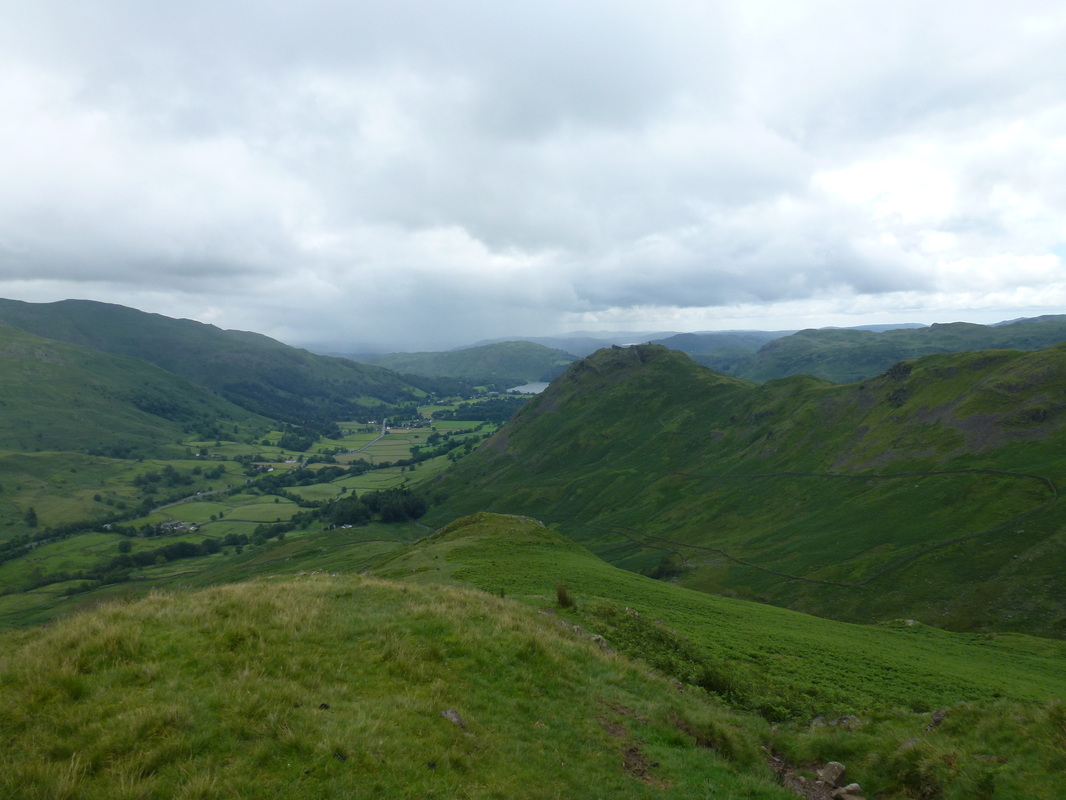 Looking back down the ascent of Steel Fell to Helm Crag 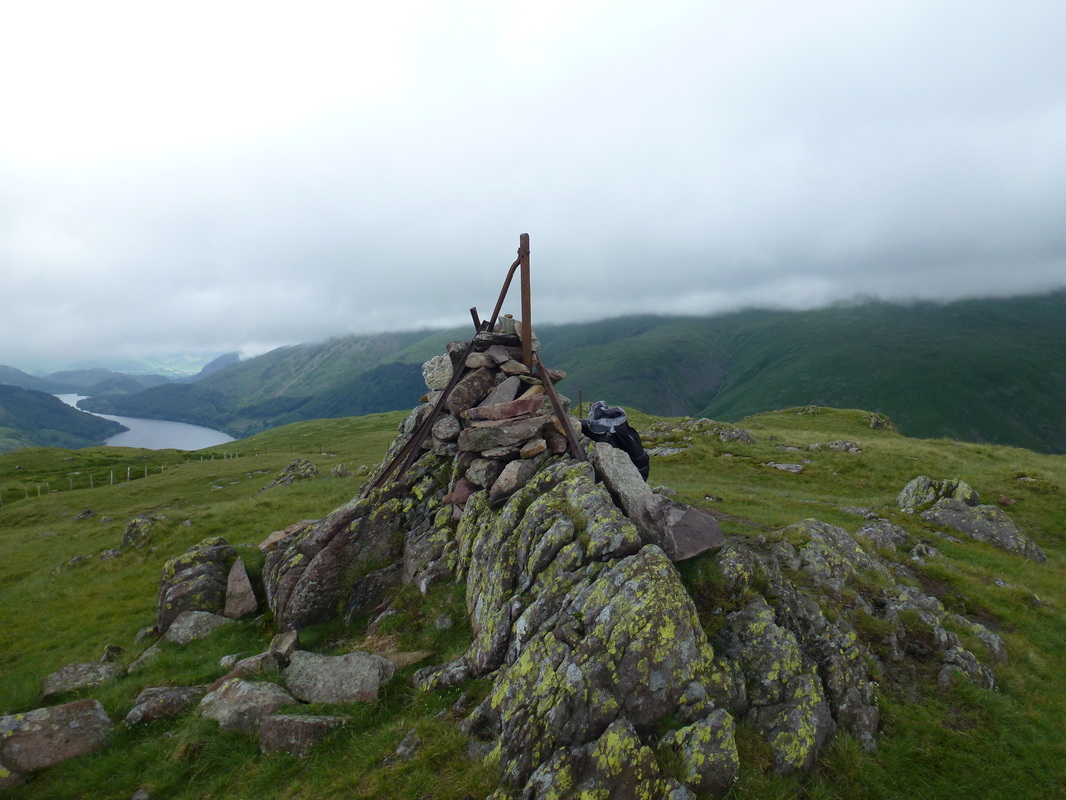 The East Cairn on Steel Fell and Thirlmere 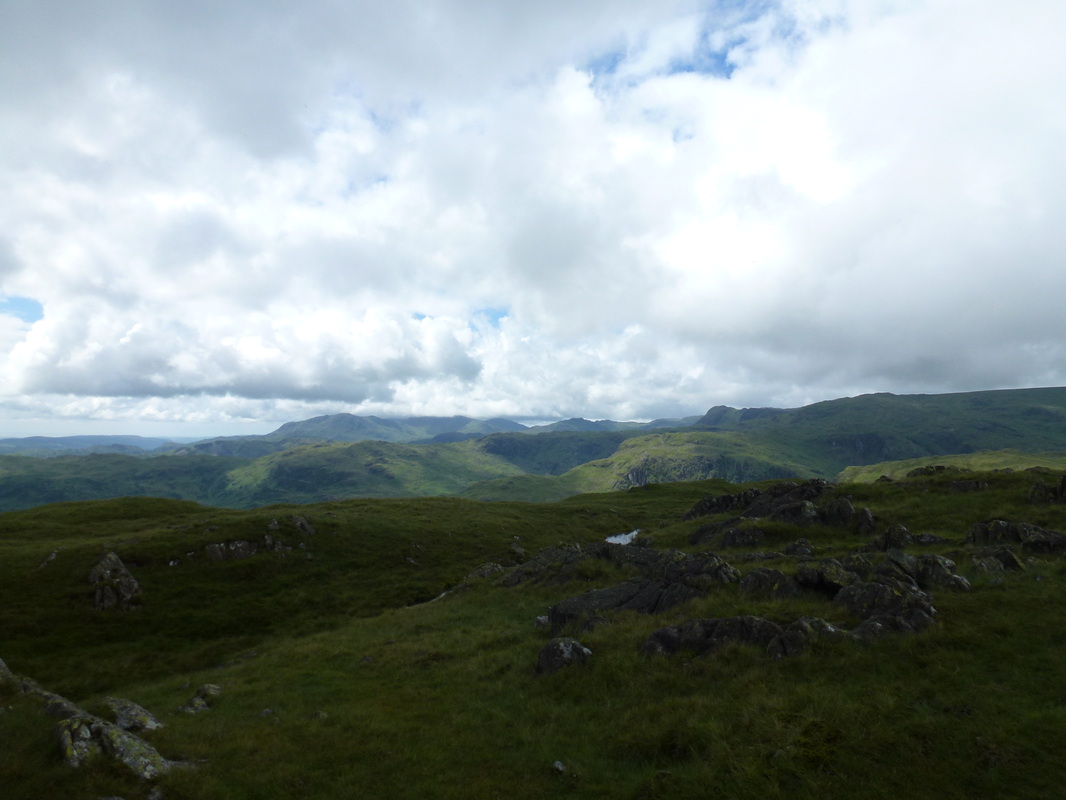 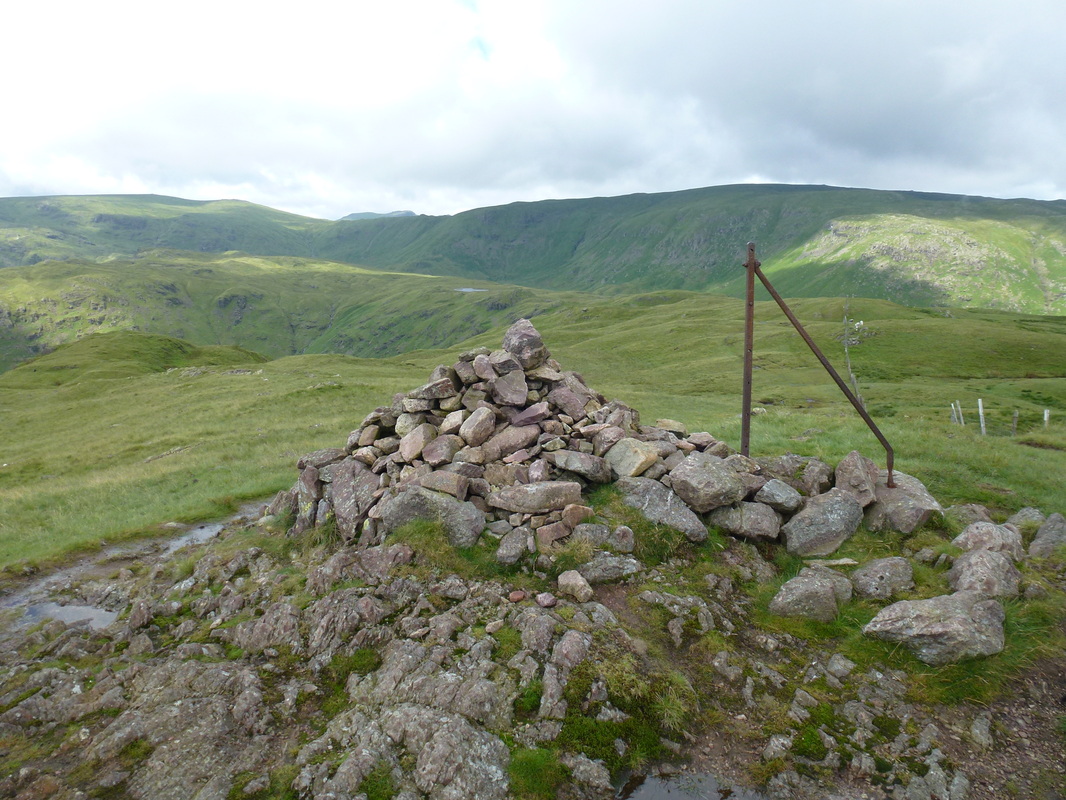 The Summit West Cairn on Steel Fell.  High Raise to the left and Ullscarf right. 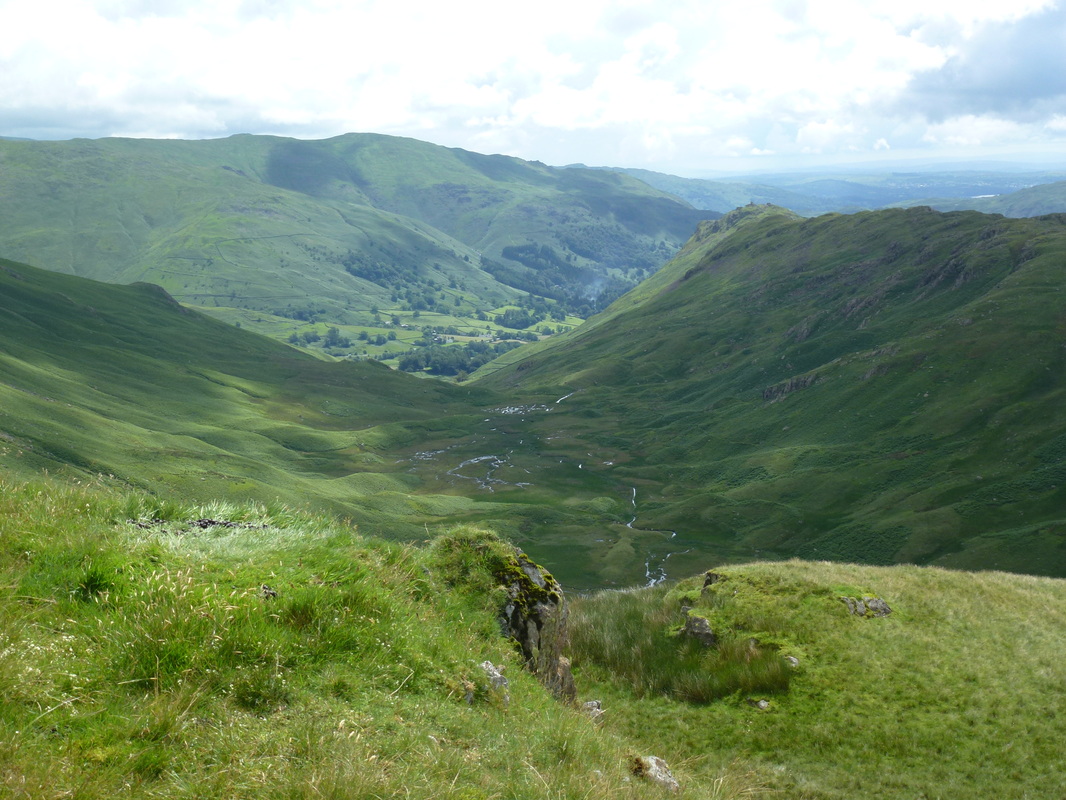 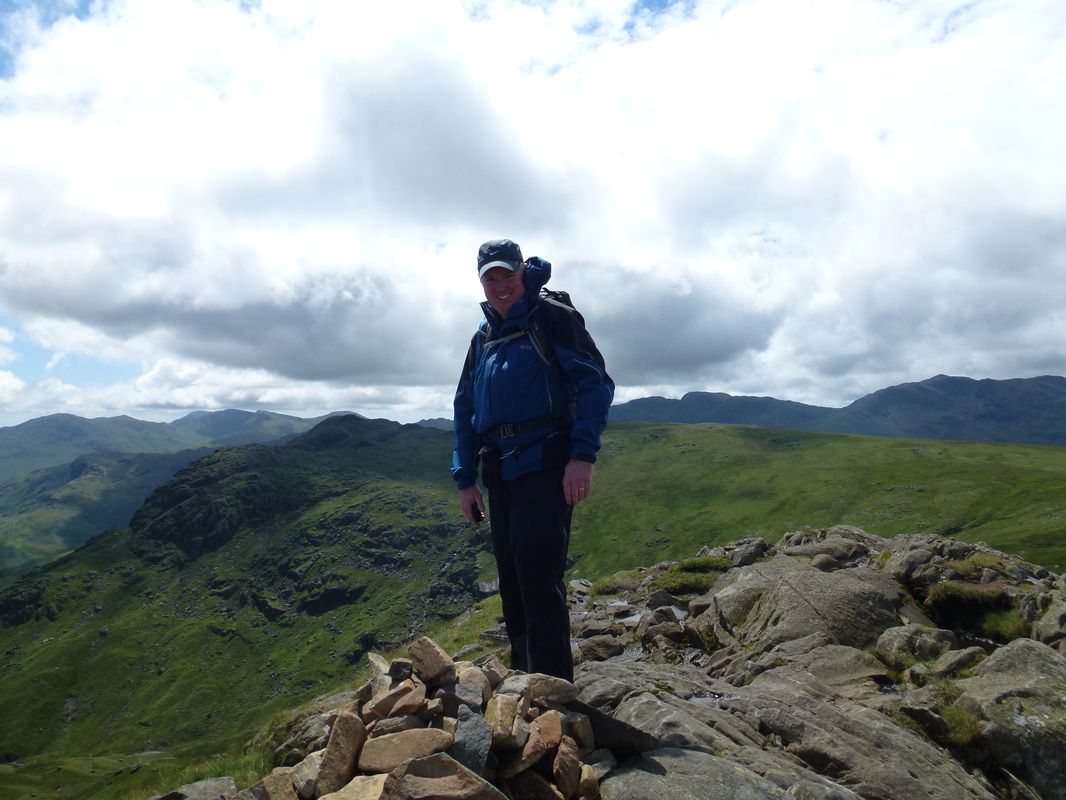 The Summit of Sergeant Man 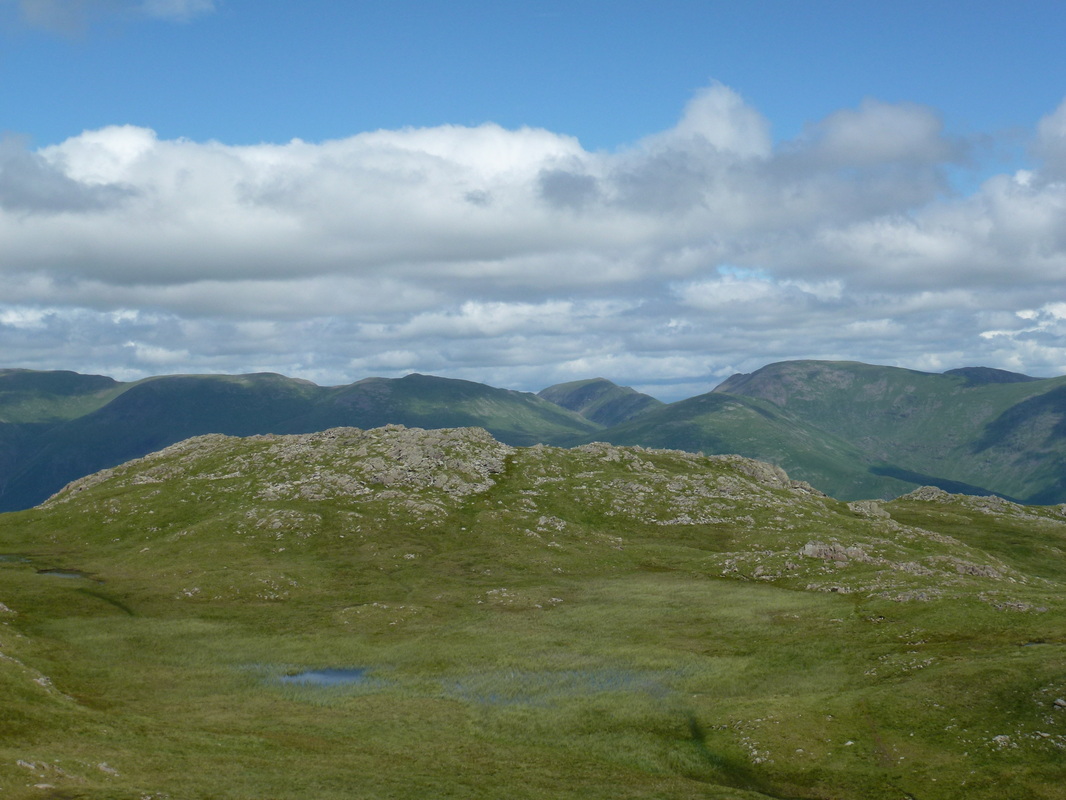 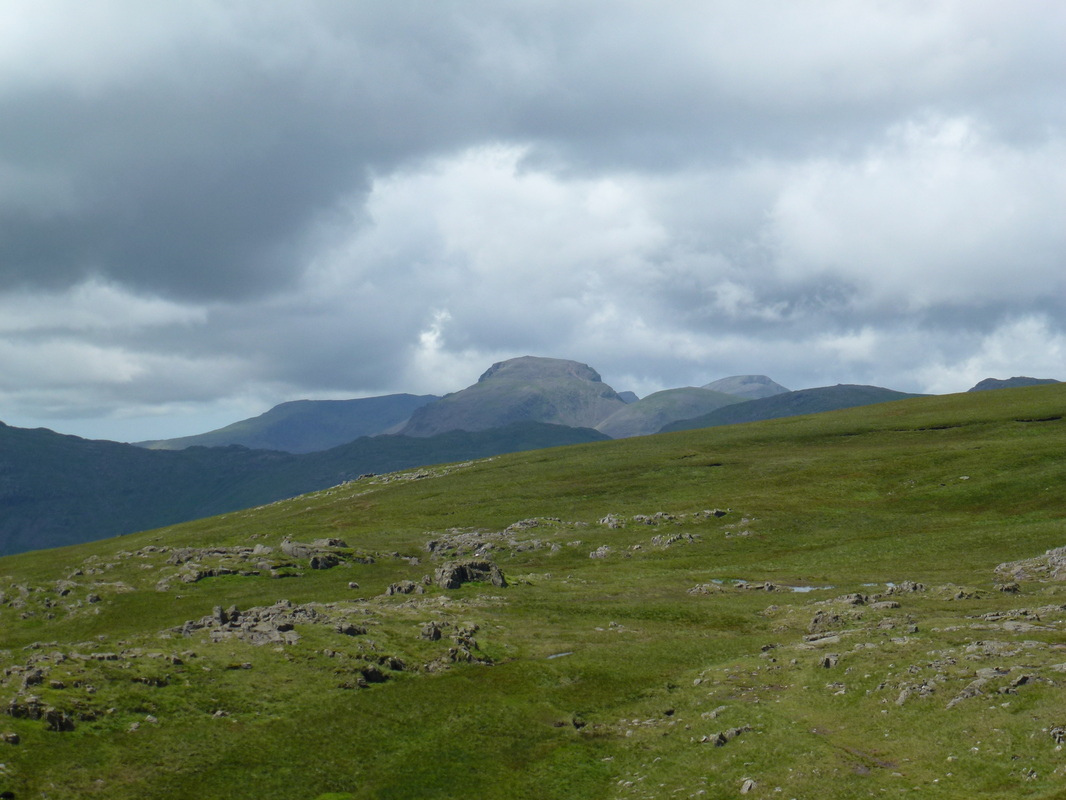 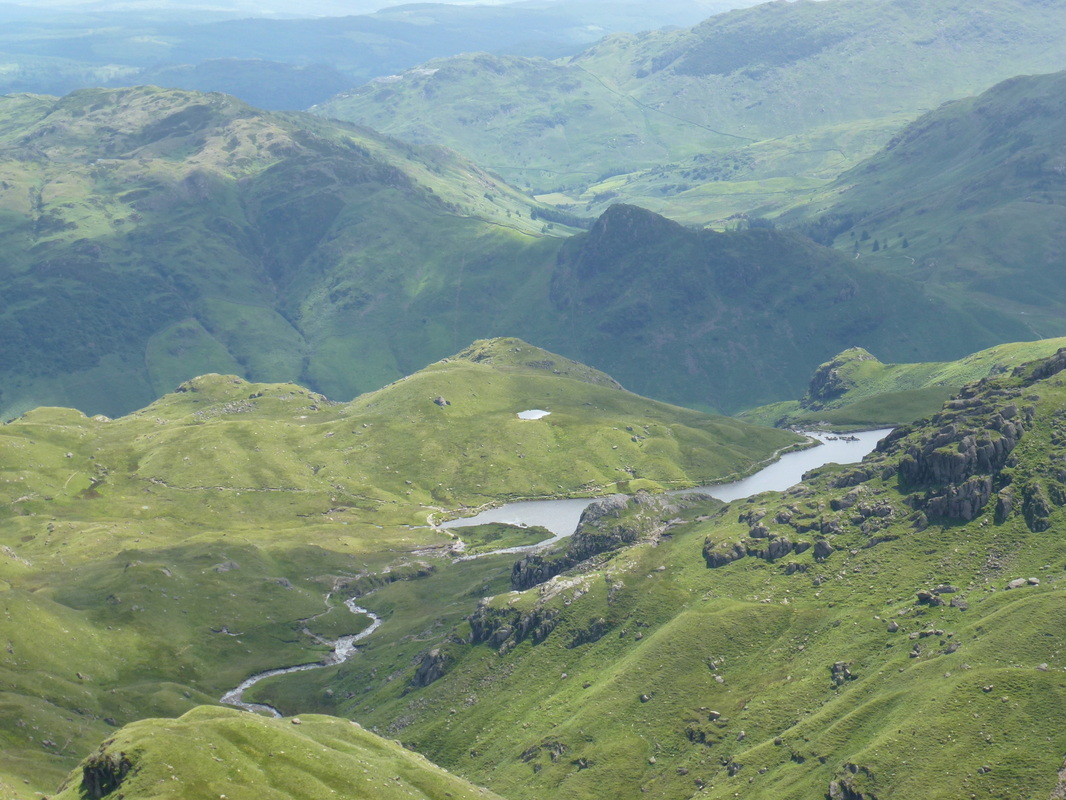 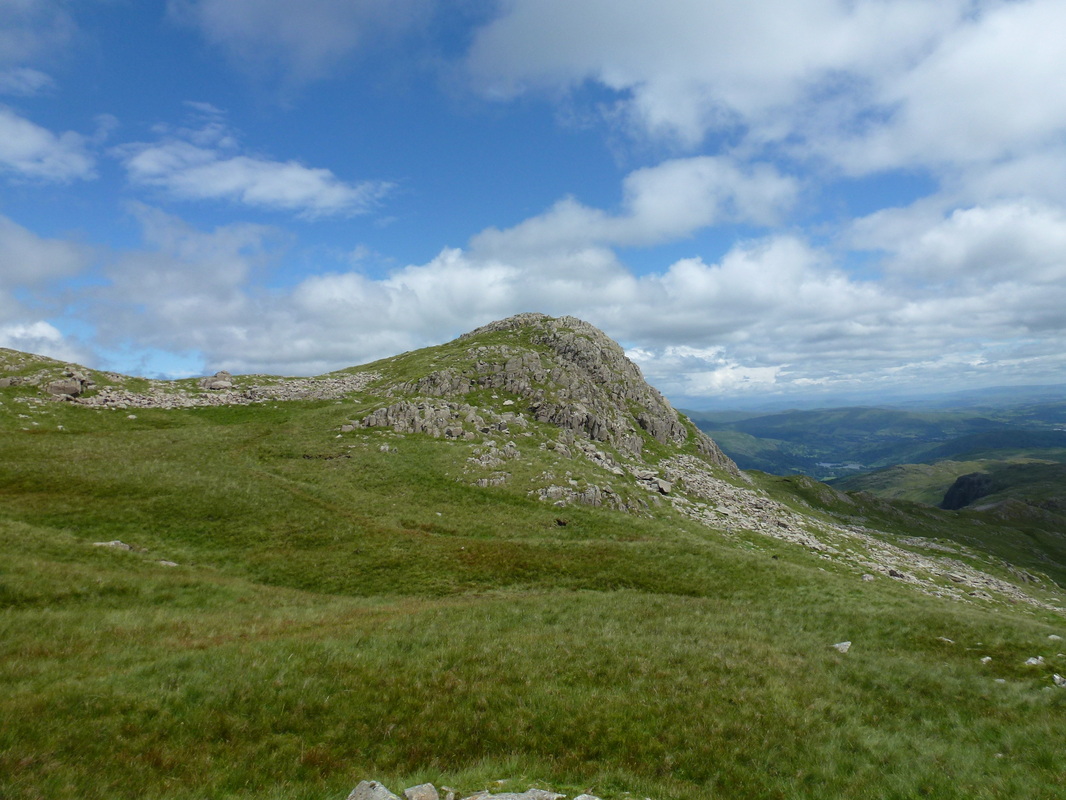 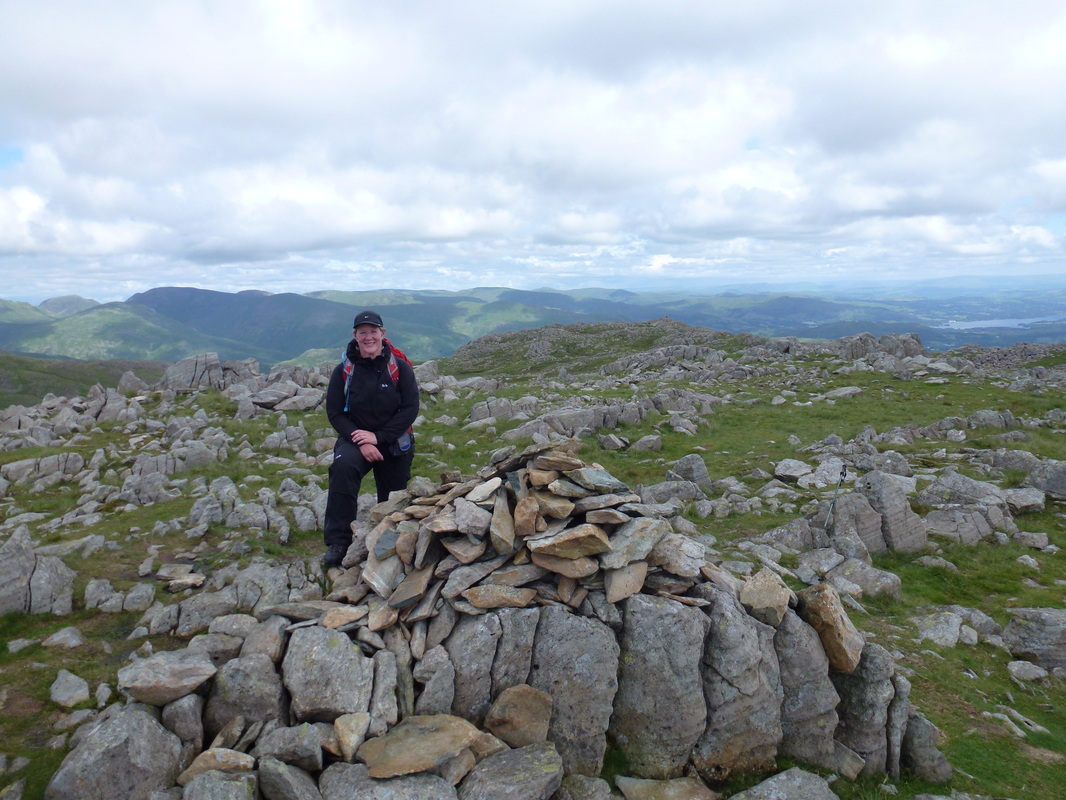 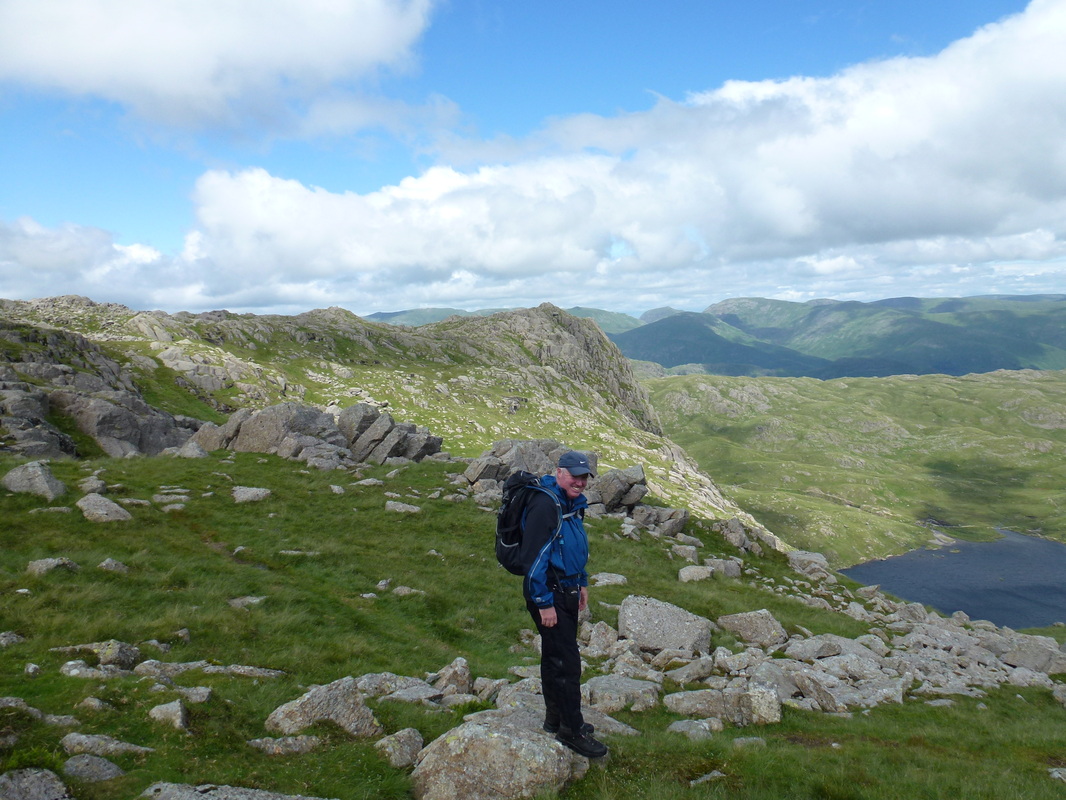 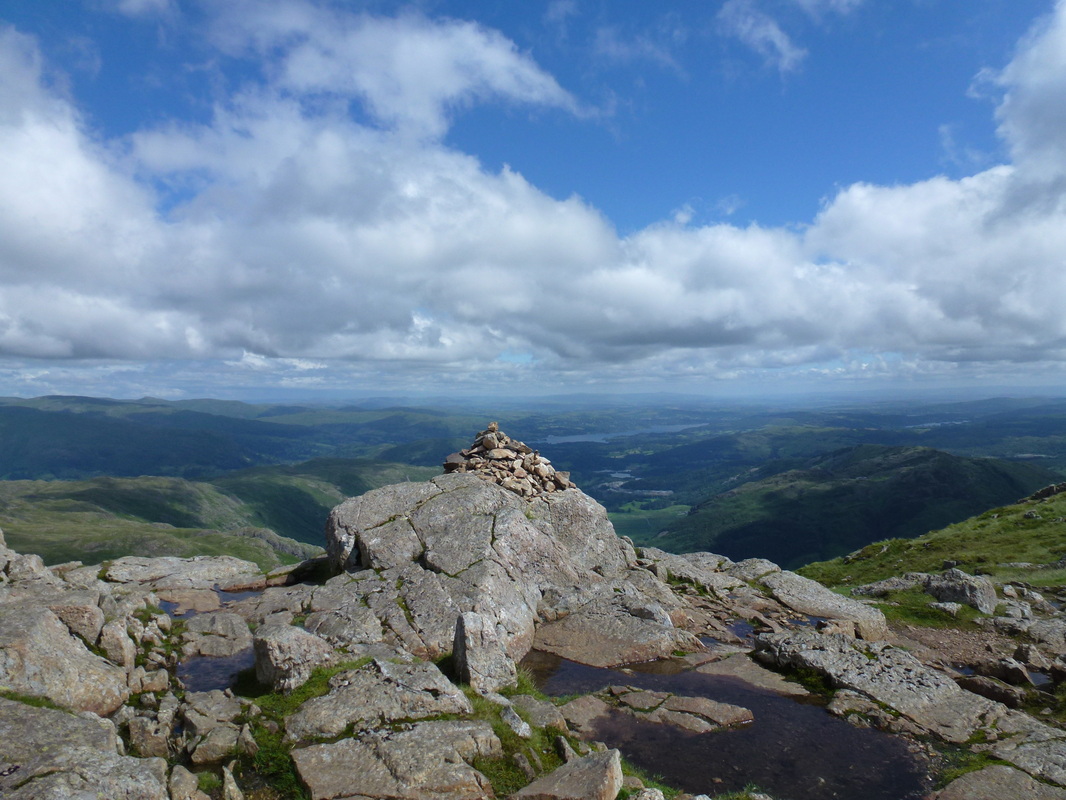 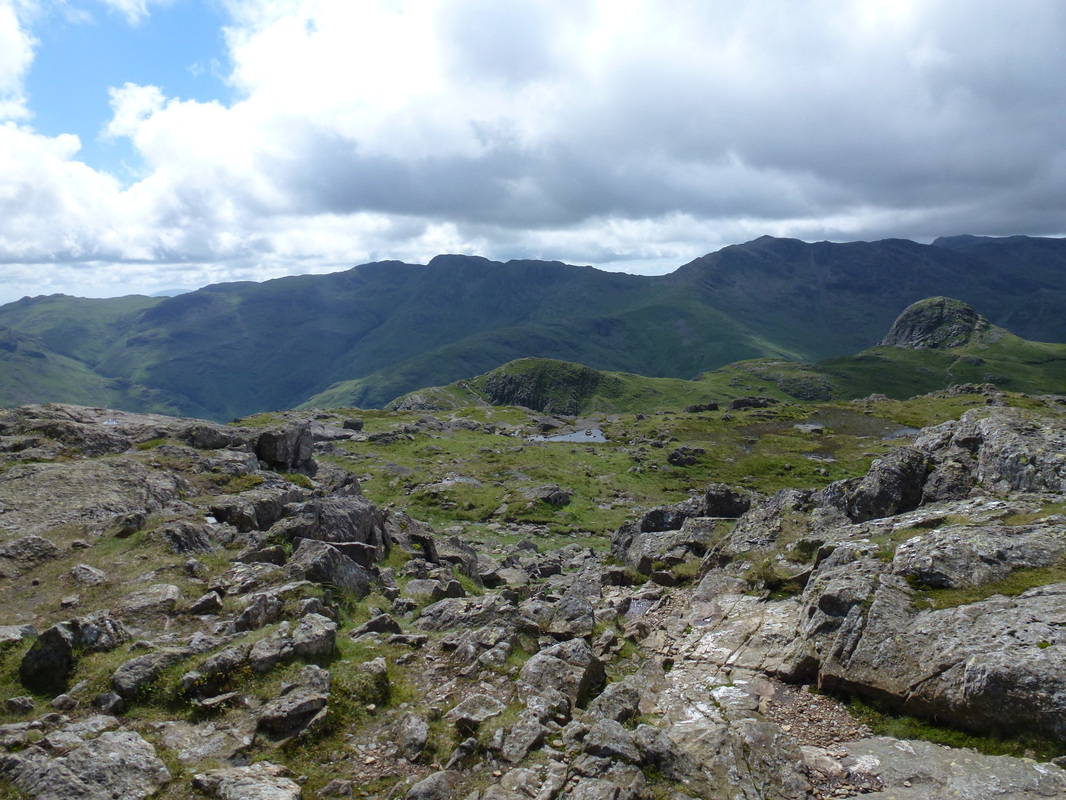 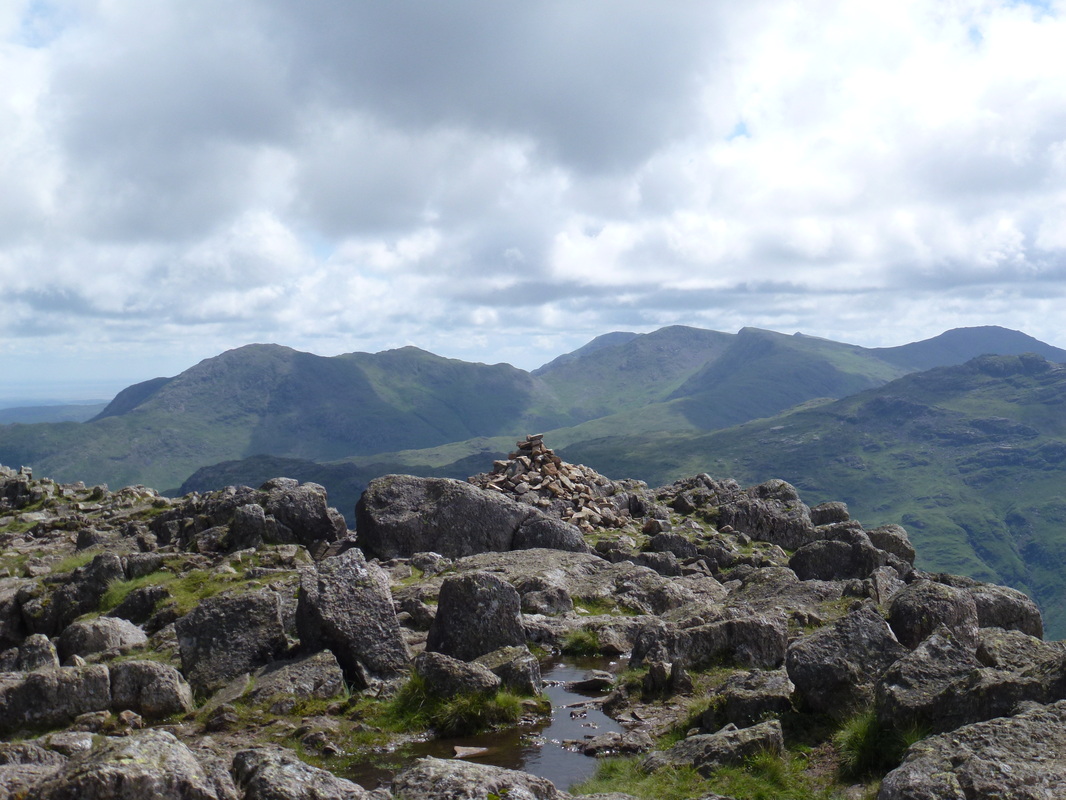 The Coniston Fells from Harrison Stickle 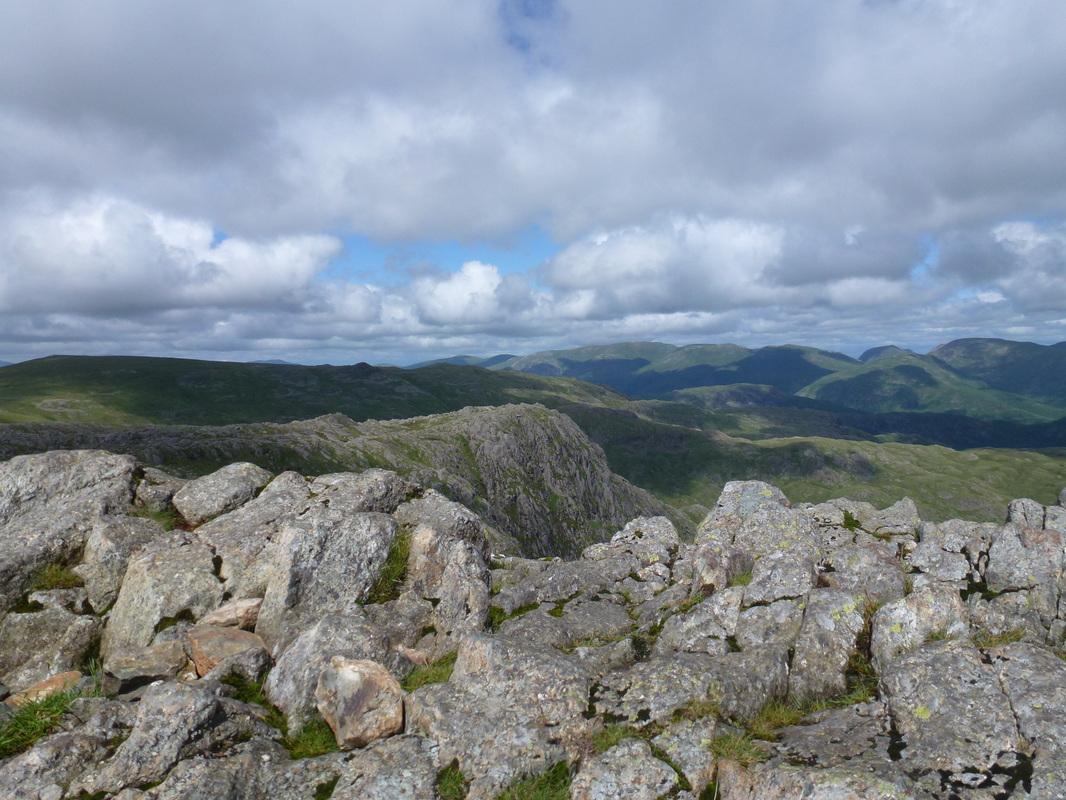 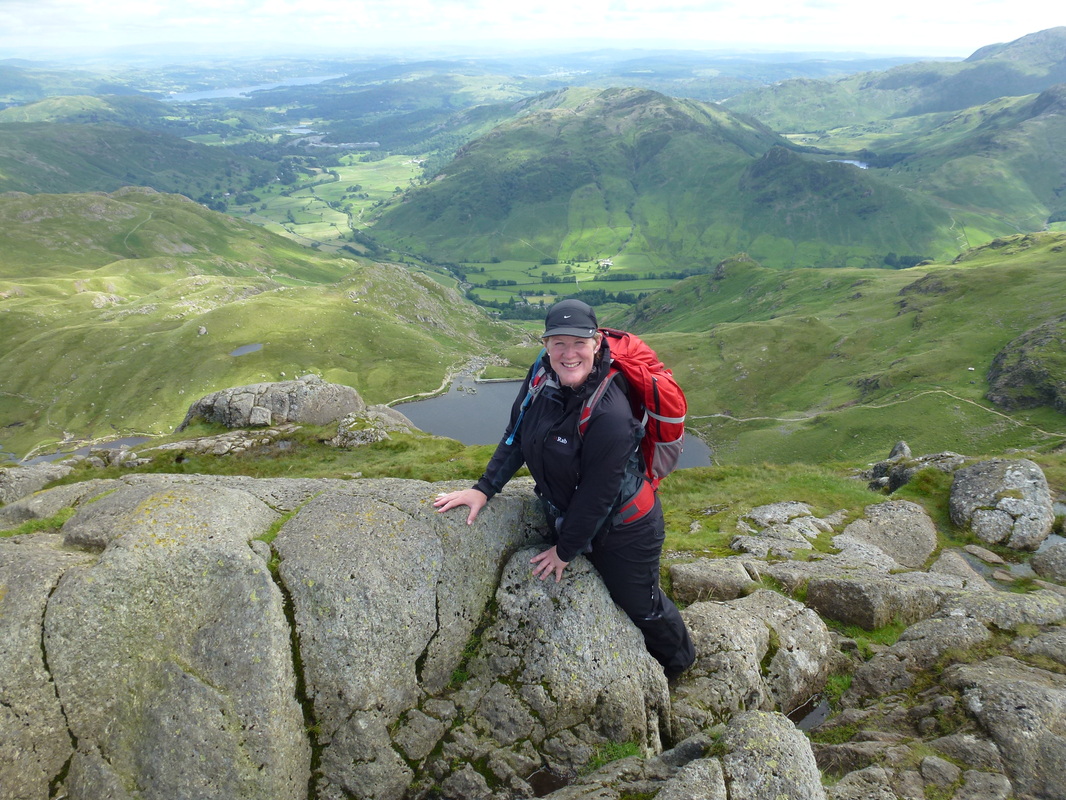 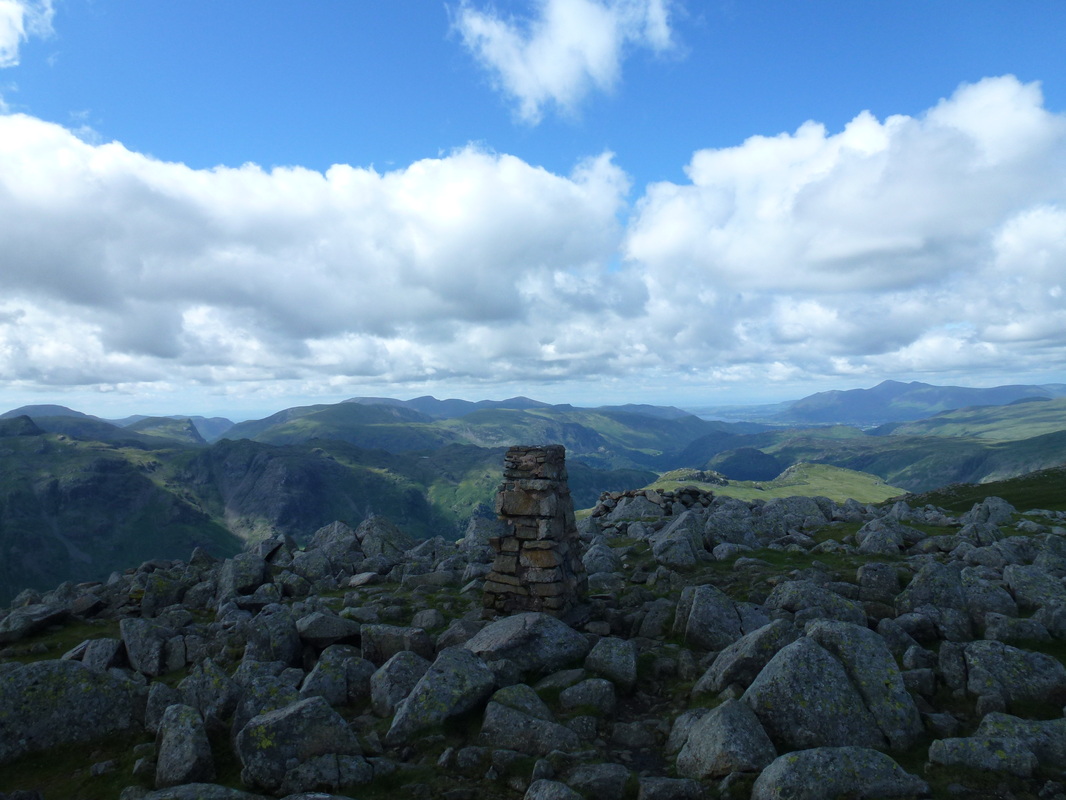 Summit Trig Point on High Raise.  Skiddaw can be seen in the distance to the right. 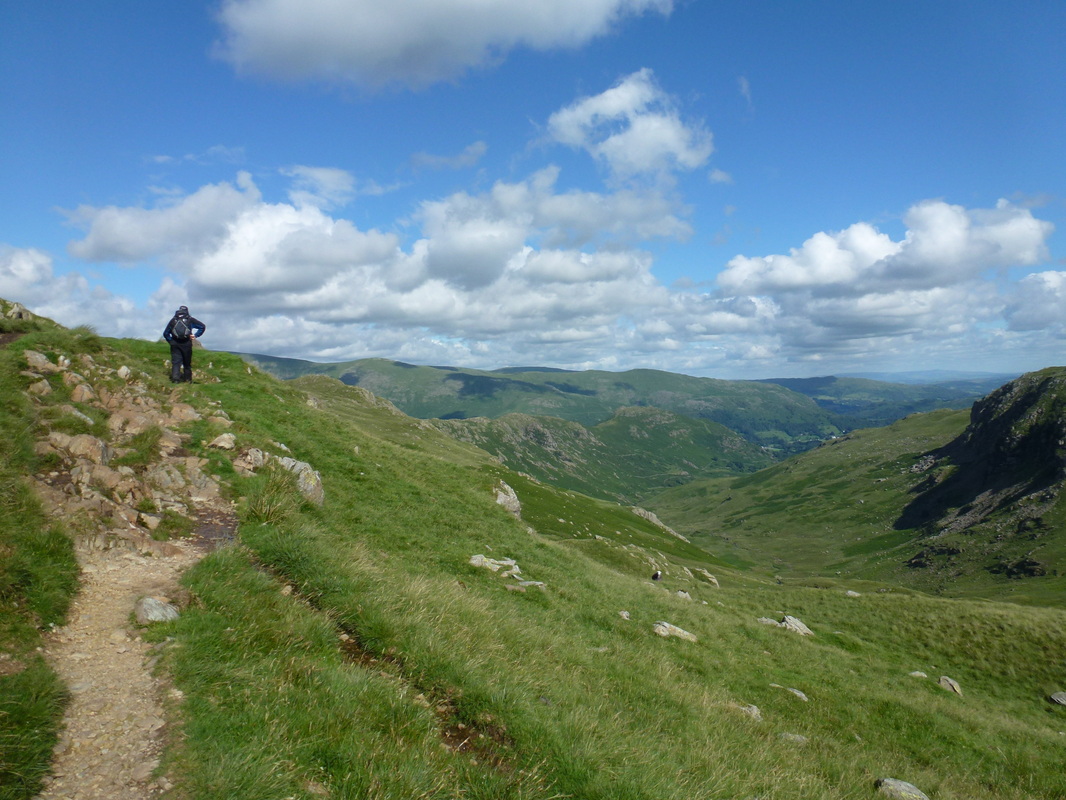 On the path to Calf Crag 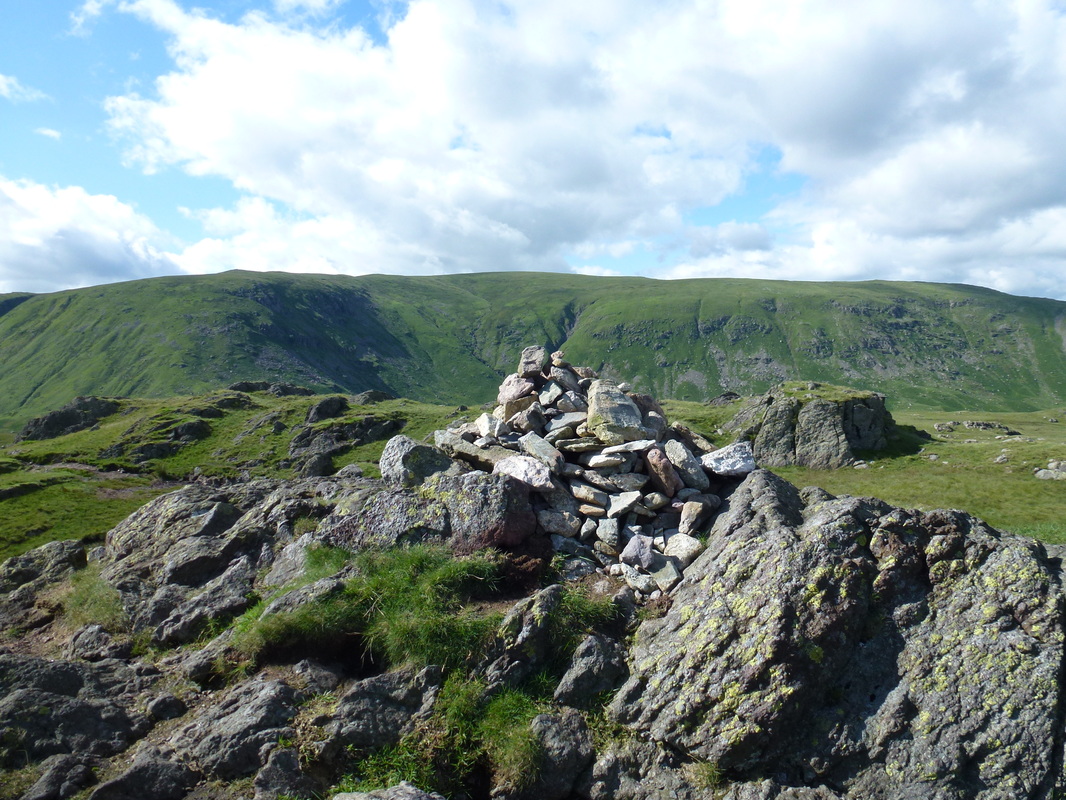 The Summit of Calf Crag 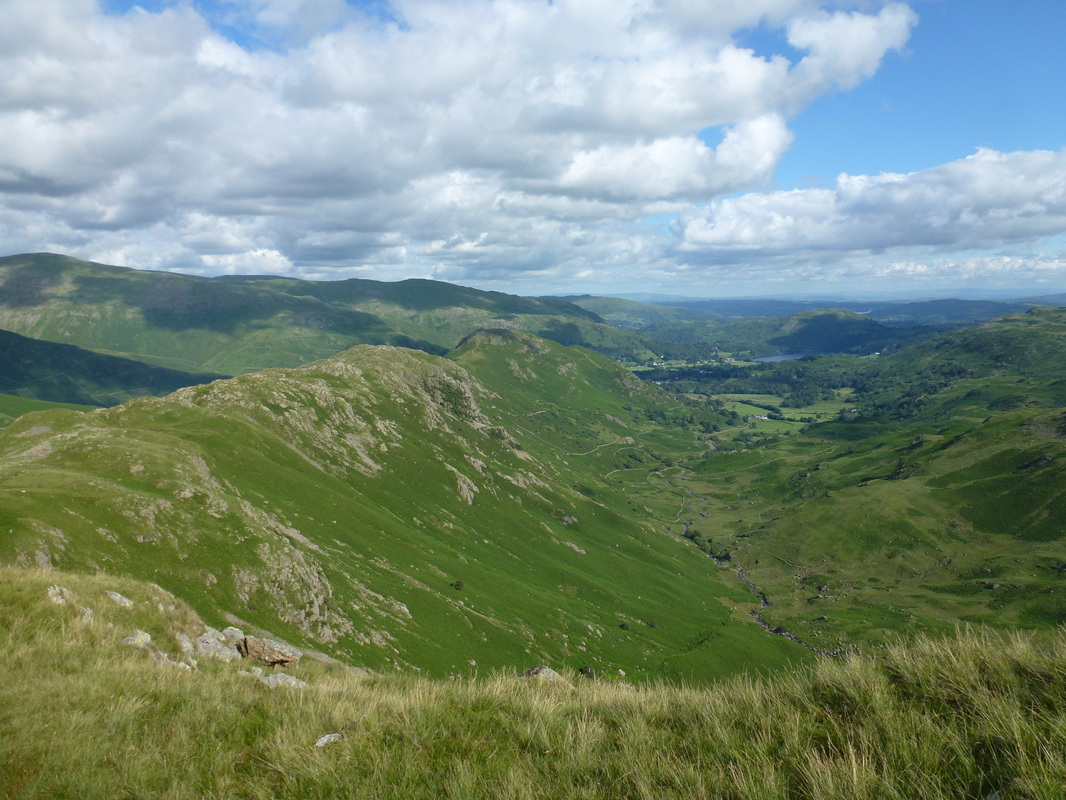 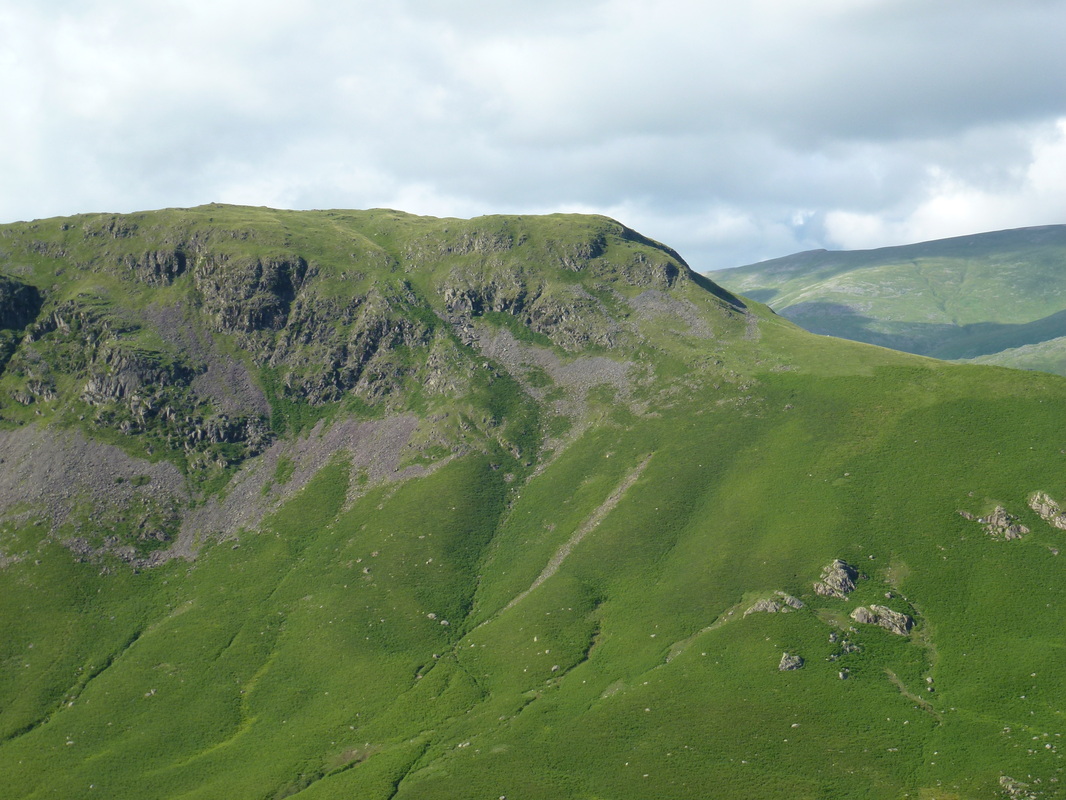 Steel Fell from the Summit of Gibson Knott 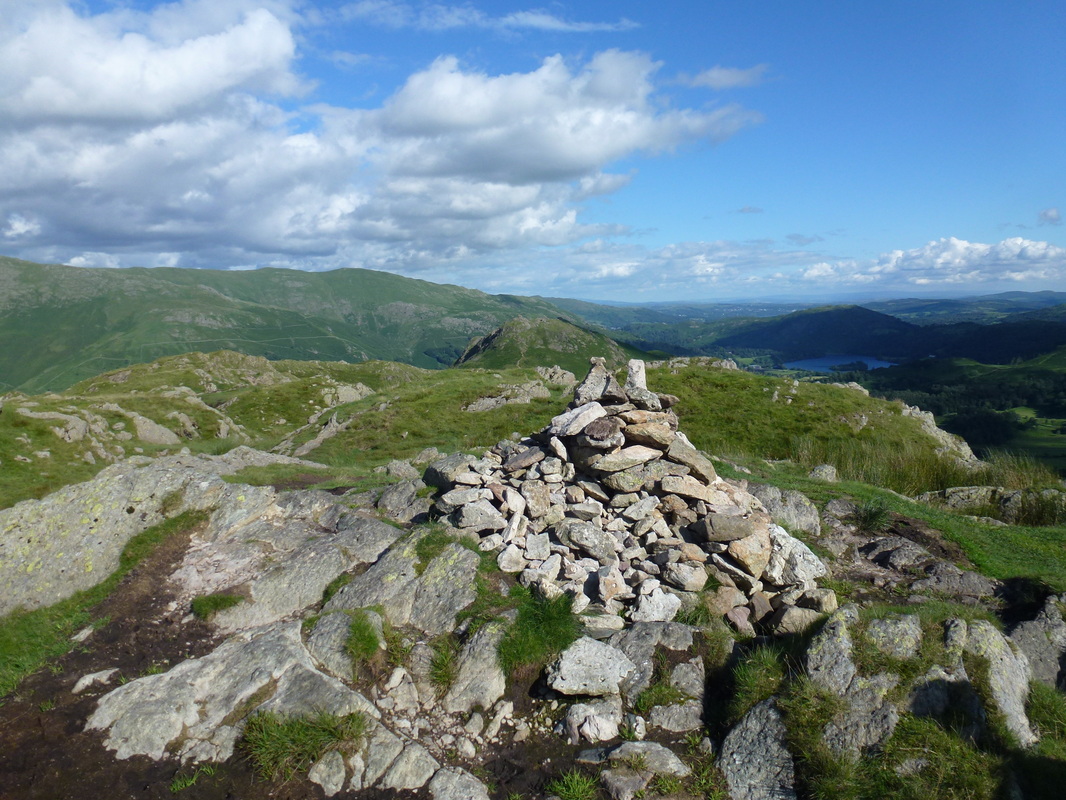 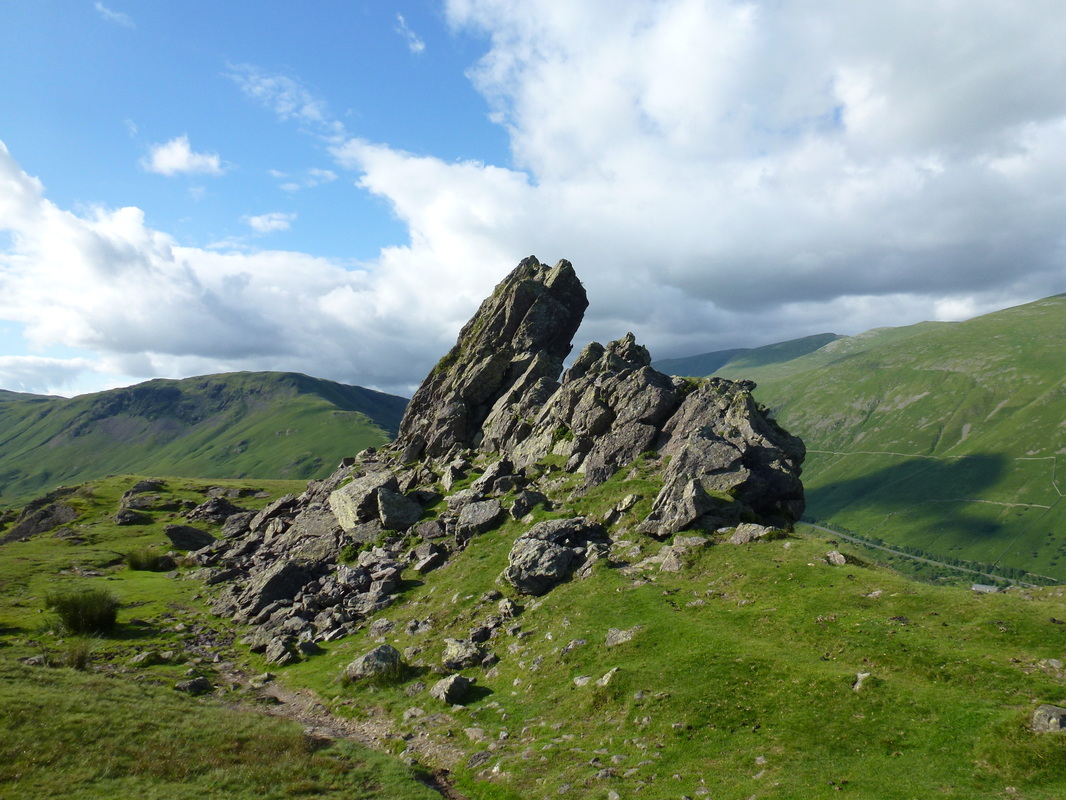 The distinctive "Howitzer ", the Summit of Helm Crag 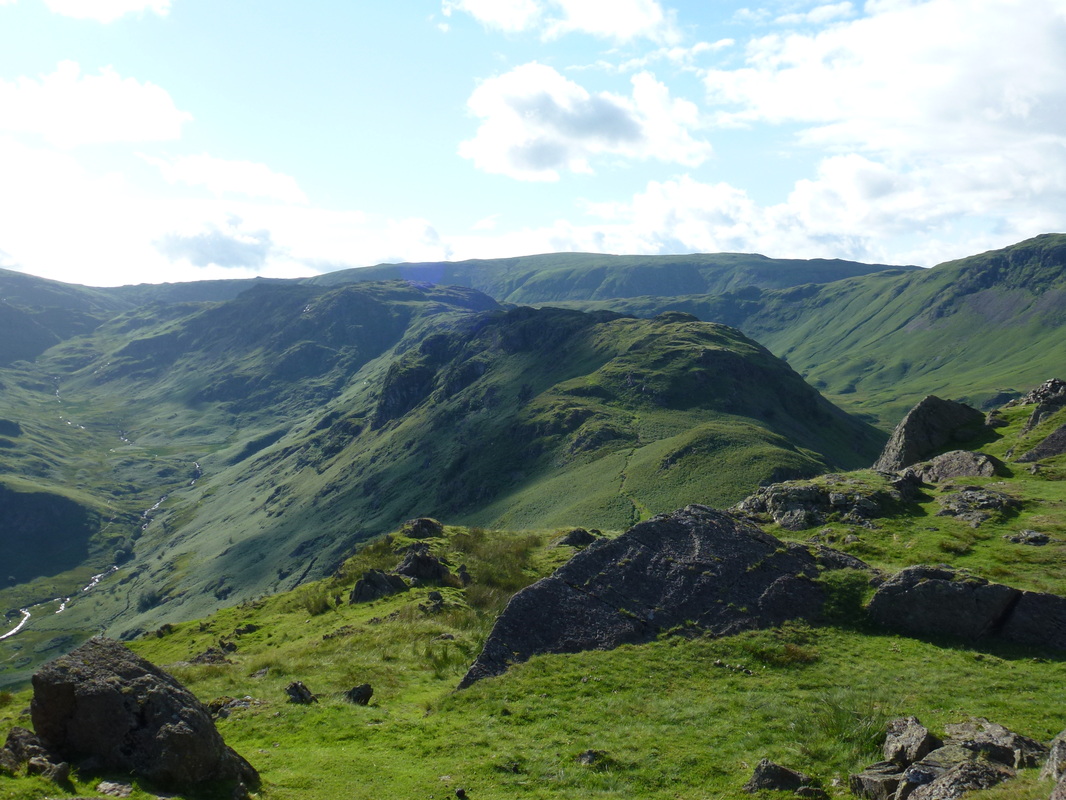 Looking back to Gibson Knott and Calf Crag
Home