Mainly good paths however the section through the gorge either side of Mallyan Spout requires care to be taken as the surface is rocky and can be slippery in wet weather. There are stepping stones to be crossed just after the Roman Road over Wheeldale Beck. In both cases after heavy rain, the gorge and the stepping stones may be impassable.

​OL27 - North York Moors (Eastern Area)
​If the above GPX file fails to download or presents itself as an XML file once downloaded then please feel free to contact me and I will send you the GPX file via e-mail.  ​​ 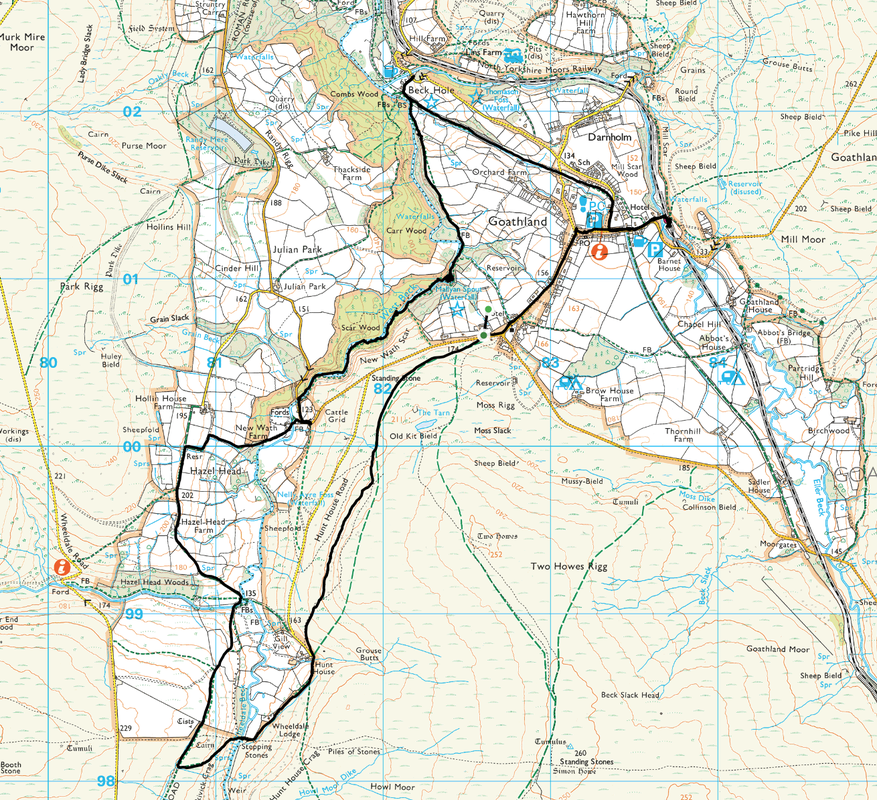 Goathland is a lovely moorland village and will be known to most people as the setting for the popular TV series "Heartbeat". The fact that the series was filmed hereabouts is evident from the throngs of people bimbling around the village - and also that there are many props still to be seen such as Bernie Scripps Garage and a couple of the Ford Anglia Police Cars on the main road.

The walk today was another we had done before - 4 years ago. Starting from just outside the village, the walk visits the waterfall of Mallyan Spout and has much scenic variety, in particular the gorge containing the Spout plus bare and open moorland with extensive views. It also has historic interest as it transits a well-preserved part of the Wheeldale Roman Road. Add in to this a chance to see the steam engines of the North York Moors Railway and you have a day packed with interest and one to enjoy.

The walk starts just outside the village near the Church and the Mallyan Spout Hotel where there is verge parking for quite a few cars. From the Mallyan Spout Hotel there is a walk of just under half a mile to reach the main village thoroughfare from where the sights of Goathland await you - along with quite a few people. We did the tourist bit for a while then made our way down the hill to Goathland Station to the excellent Tea Room - they do not take the mickey with prices here and whilst we were sampling their fare we were lucky enough to see the famous steam engine Sir Nigel Gresley pull in to the Station. Film buffs will also know that Goathland Station was used as Hogsmeade Station in the Harry Potter films.

Making our way back into the village we headed on the way to Beck Hole which passes the large Car Park before joining a good path (the Grosmont Rail Trail) through woodland to reach the hamlet and its lovely pub that also doubles as a shop. Doubling back to the edge of Carr Wood the route now heads uphill by the side of the forest and eventually reaches the impressive Mallyan Spout via a sometimes slippery & rocky path. Care needs to be taken in and around the vicinity of the Spout, as the rock can be extremely slippery. Mallyan Spout drops some 70ft and is an impressive sight, particularly after rain.

Leaving the Spout, the route continues through the gorge to reach a road before heading over farmland giving great views over the valley. The route now reaches the Wheeldale Roman Road, built around AD80 and is believed to be part of a moorland route from Malton to the North Sea Coast - there are other theories that pre date the road earlier than Roman. Leaving the Roman Road at a small cairn, the route now heads over moorland before dropping down a heathery path to Wheeldale Beck, crossing via the Stepping Stones. From the beck, the path heads to Hunt House from where there is a choice of routes back to Goathland - either follow the road back or enjoy a super moorland ramble over Two Howes Rigg to eventually reach the verge near The Mallyan Spout Hotel.

This is a lovely walk and apart from the throngs in Goathland and a few people at Mallyan Spout we saw nobody. We finished the walk off with another visit to the Station where we were lucky enough to see Sir Nigel Gresley again before heading off into nearby Whitby for a visit to the Abbey followed by Fish & Chips! 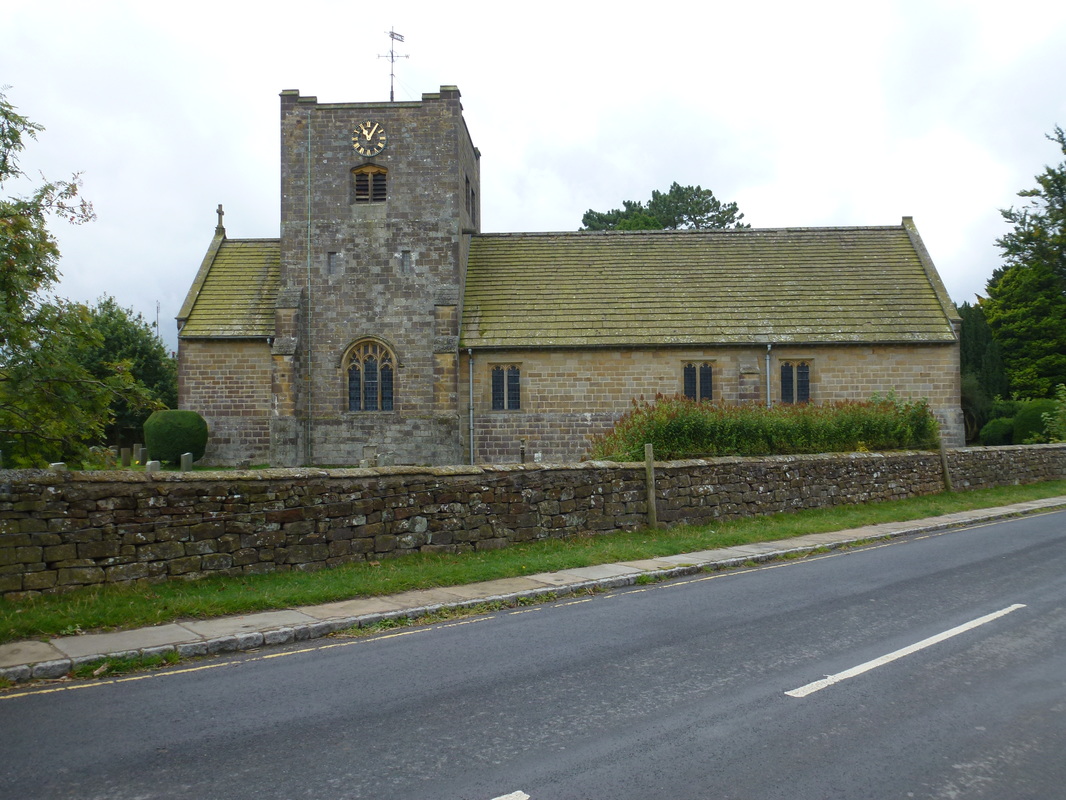 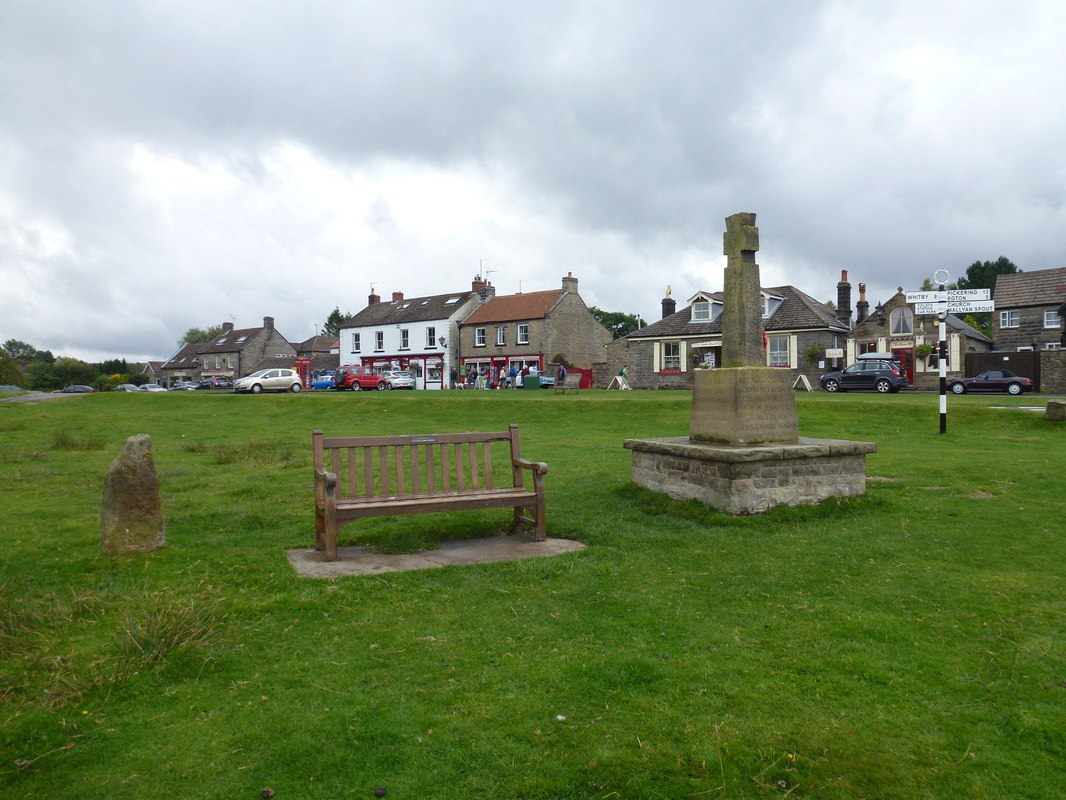 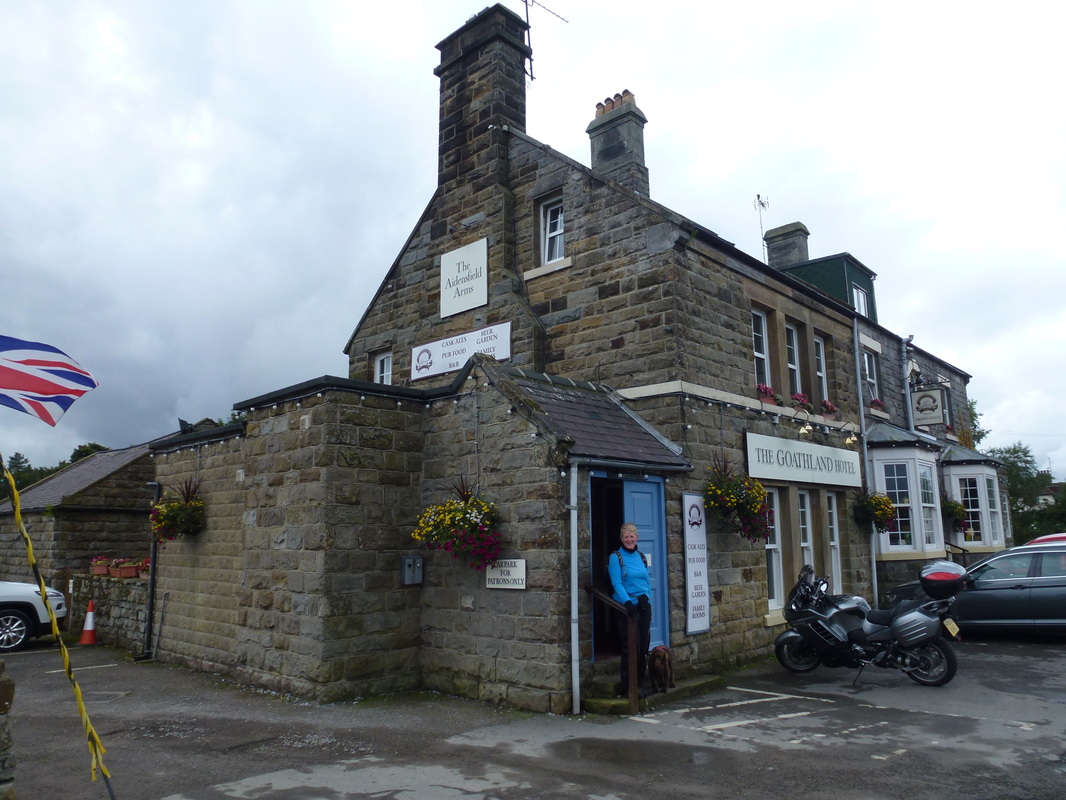 A quick half in The Aidensfield Arms? I don't think so. 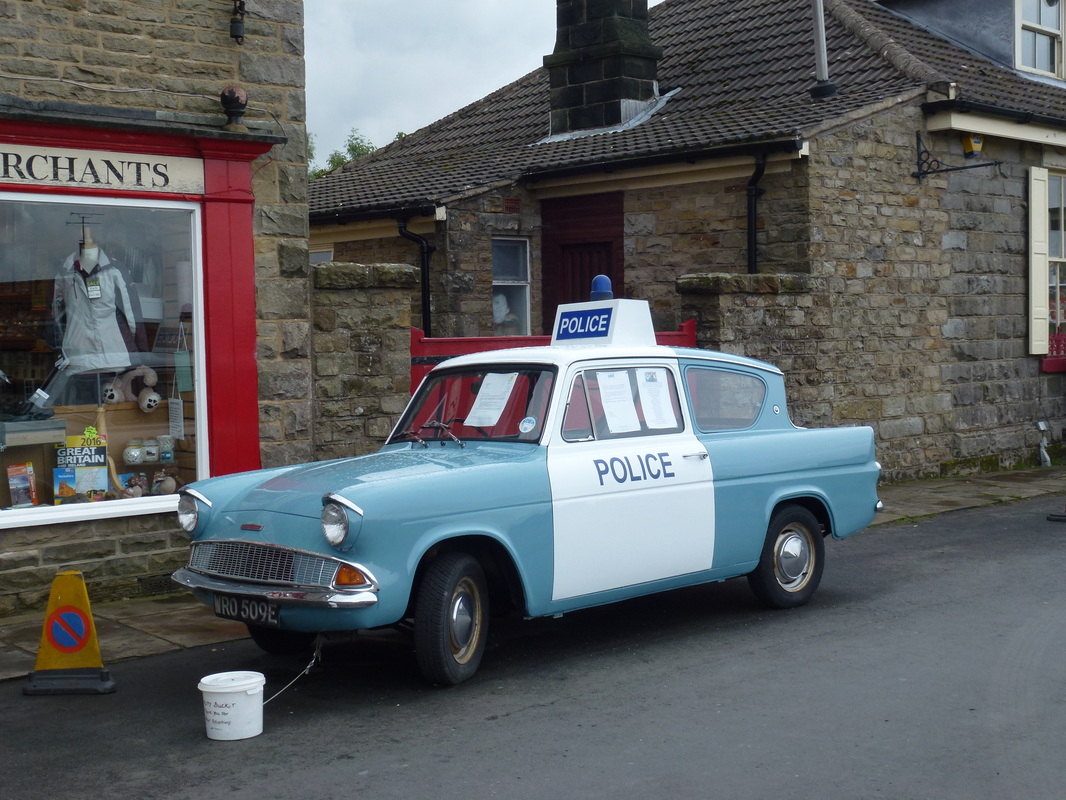 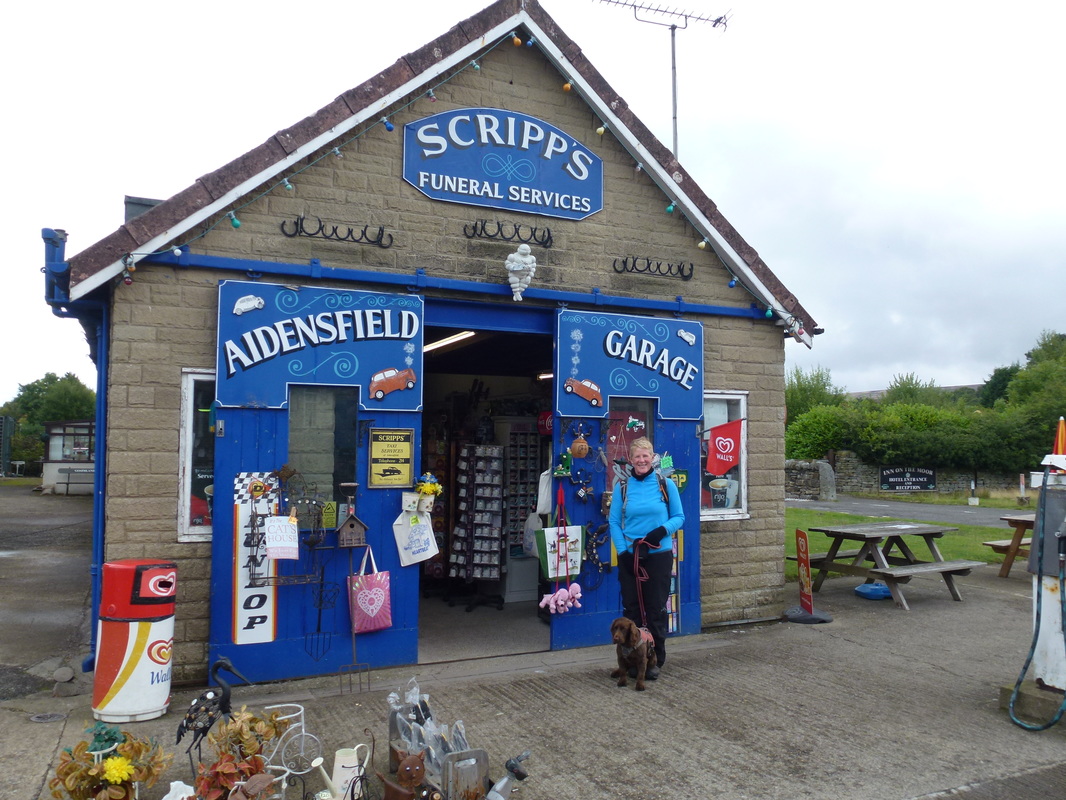 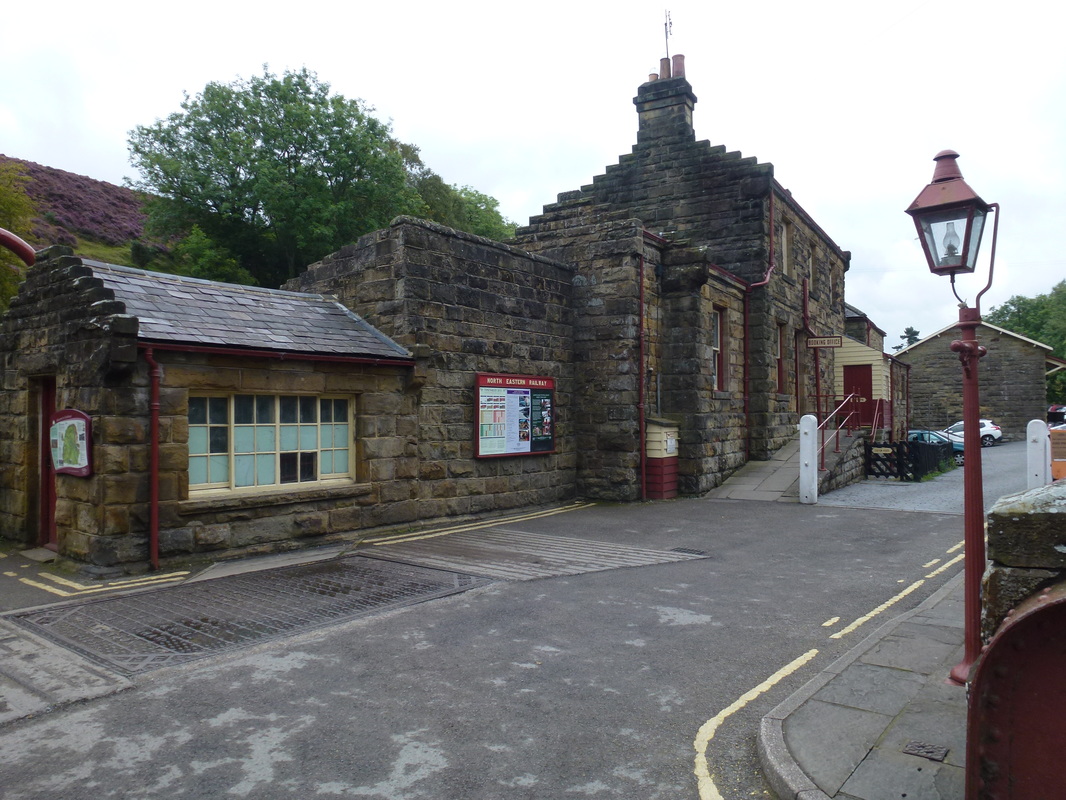 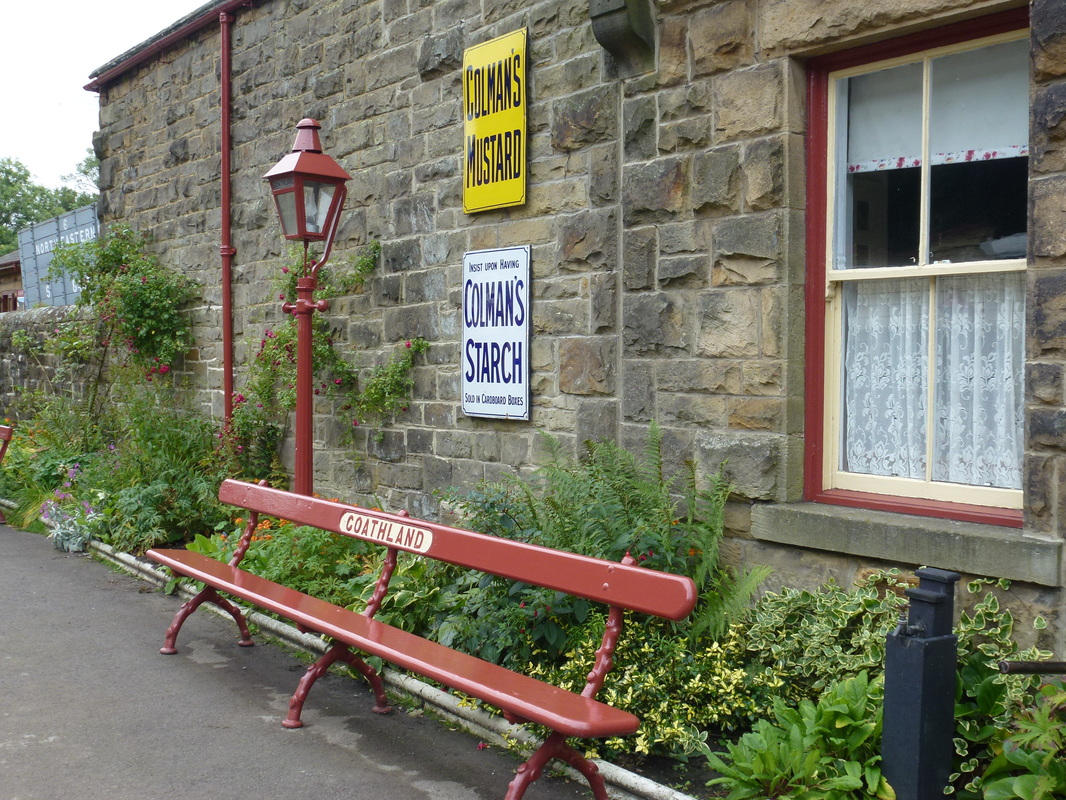 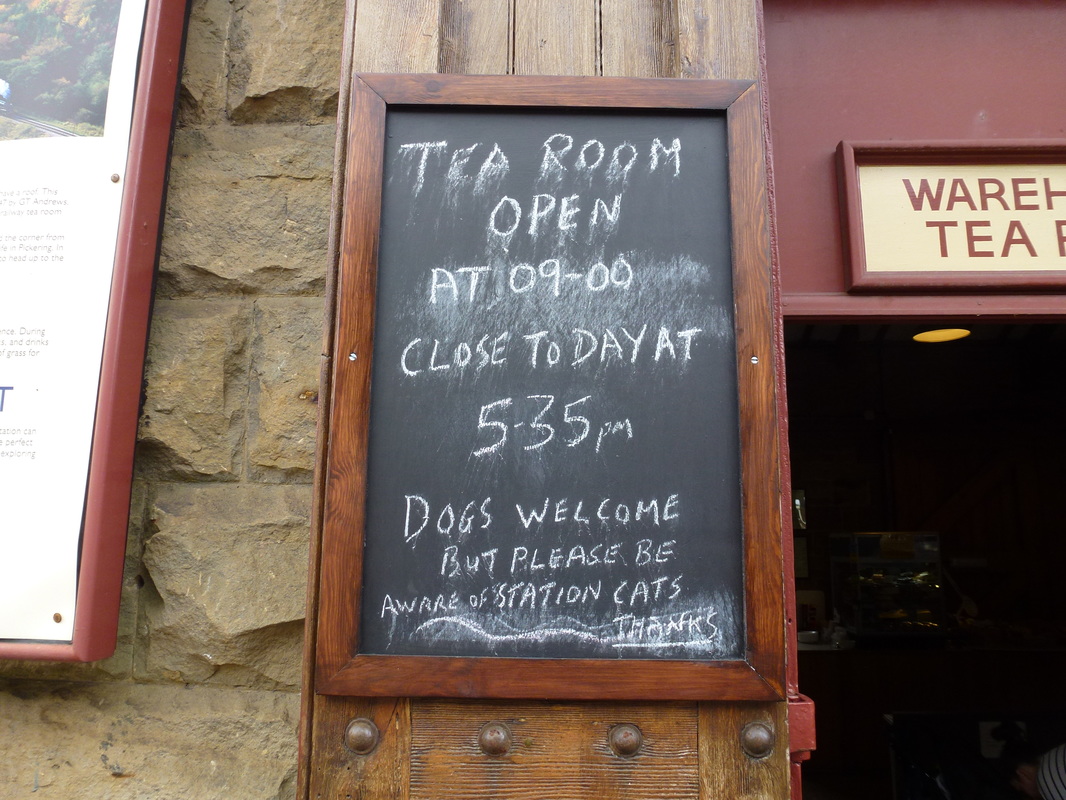 You have been warned Fudge - Skimbleshanks and his mates are about!!  Nice pasties and cakes here. 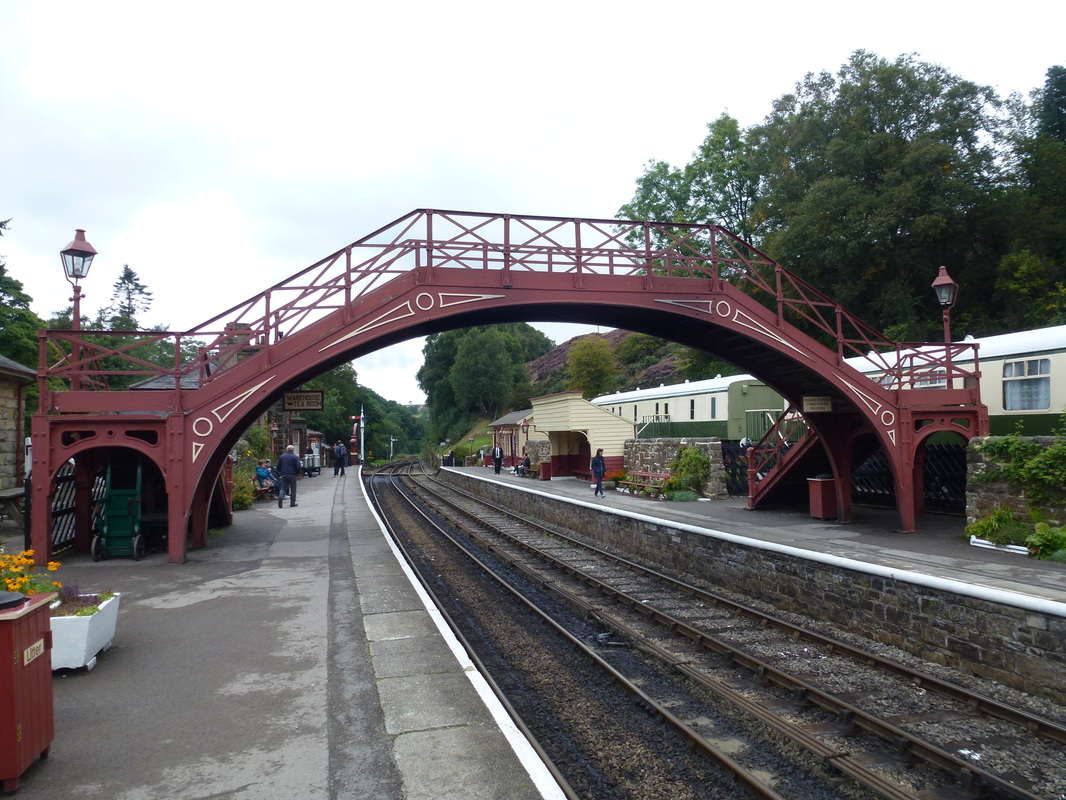 The lovely bridge over Goathland Station 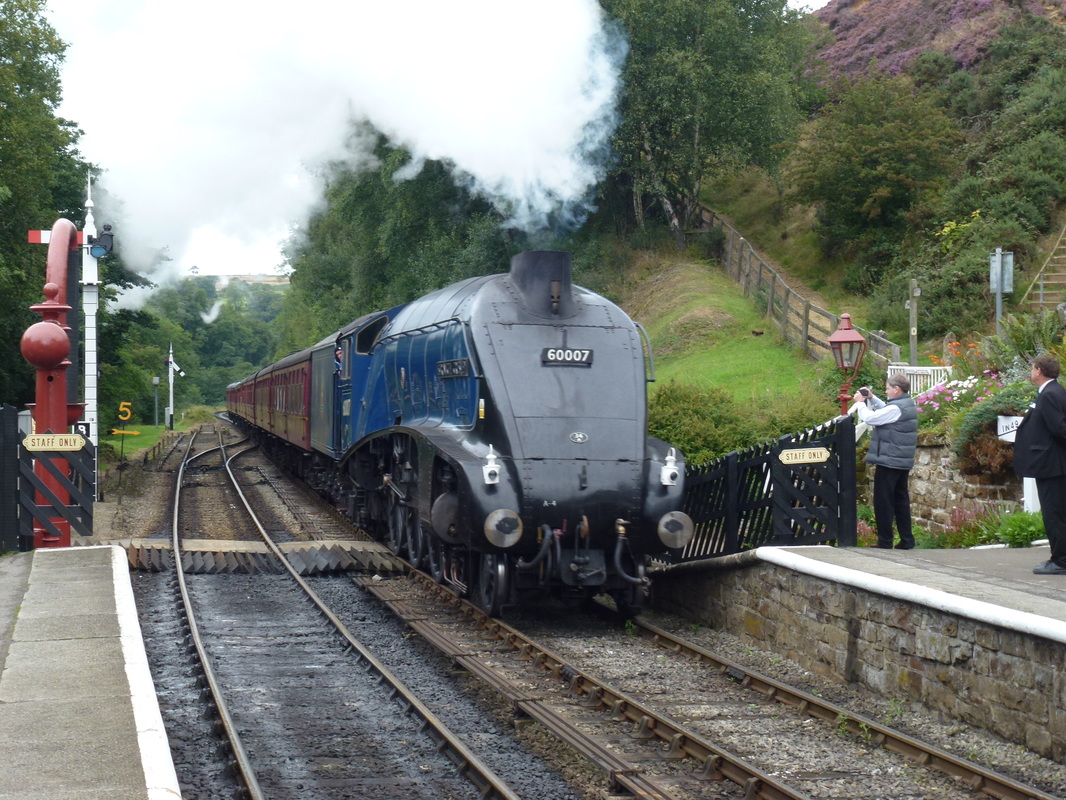 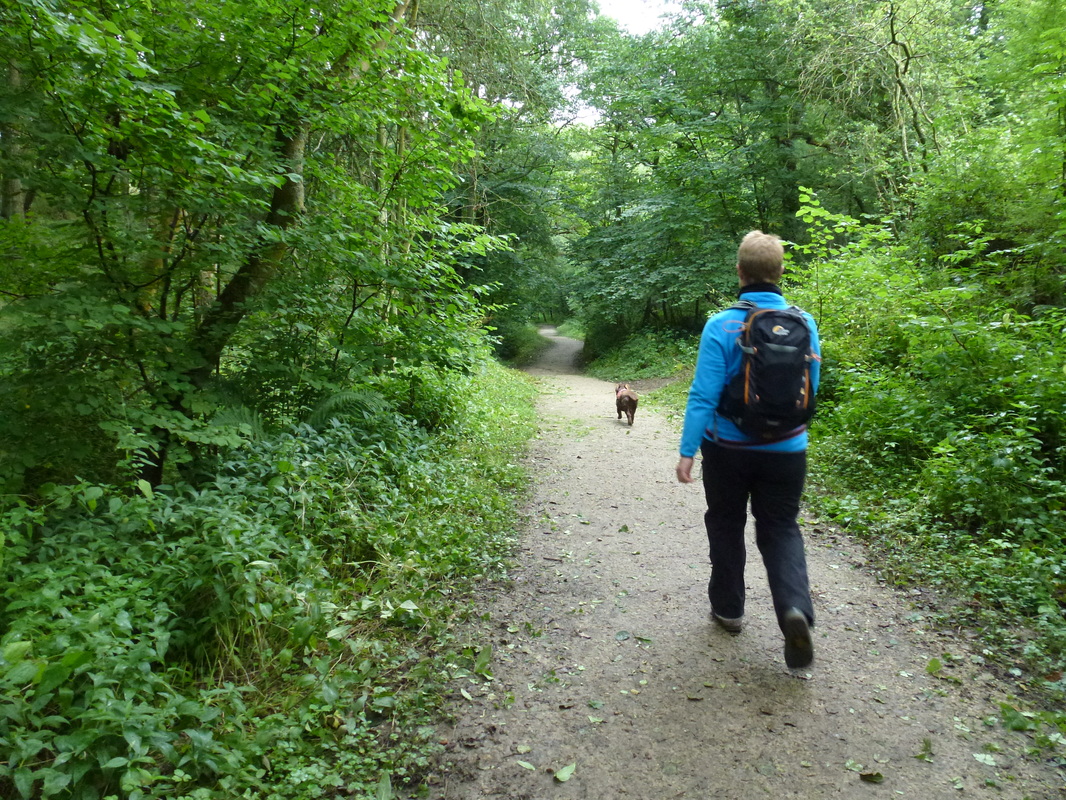 Leaving Goathland for the path to Beck Hole 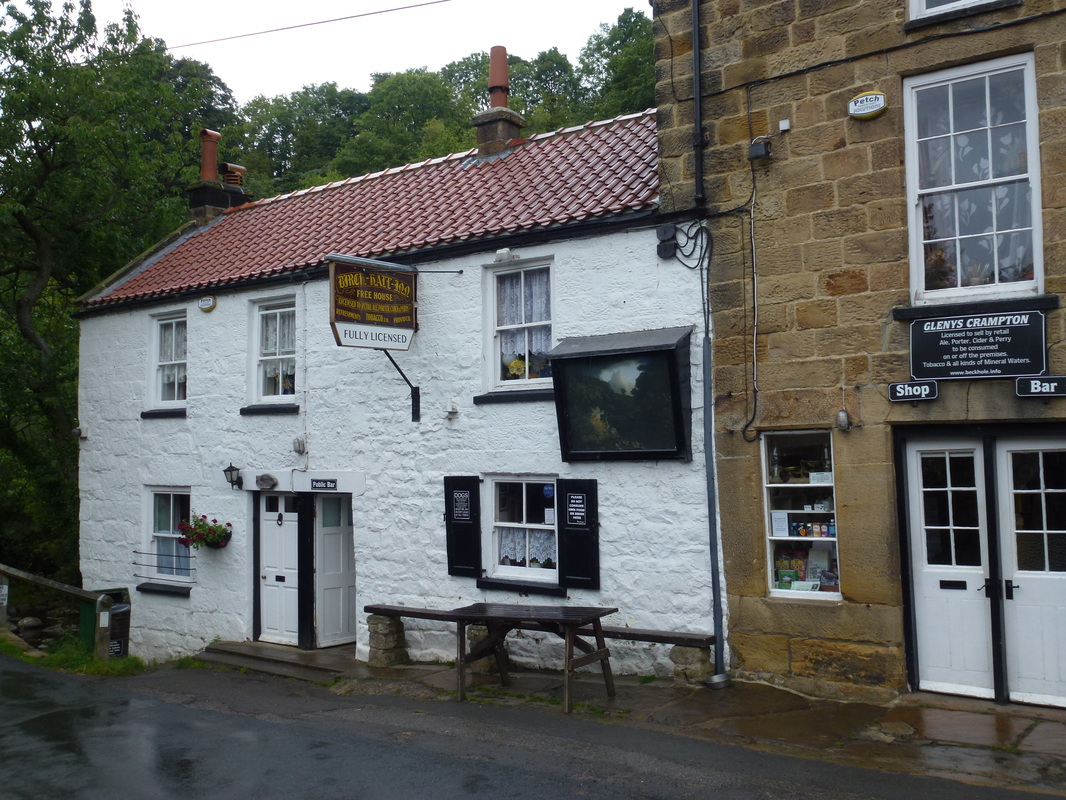 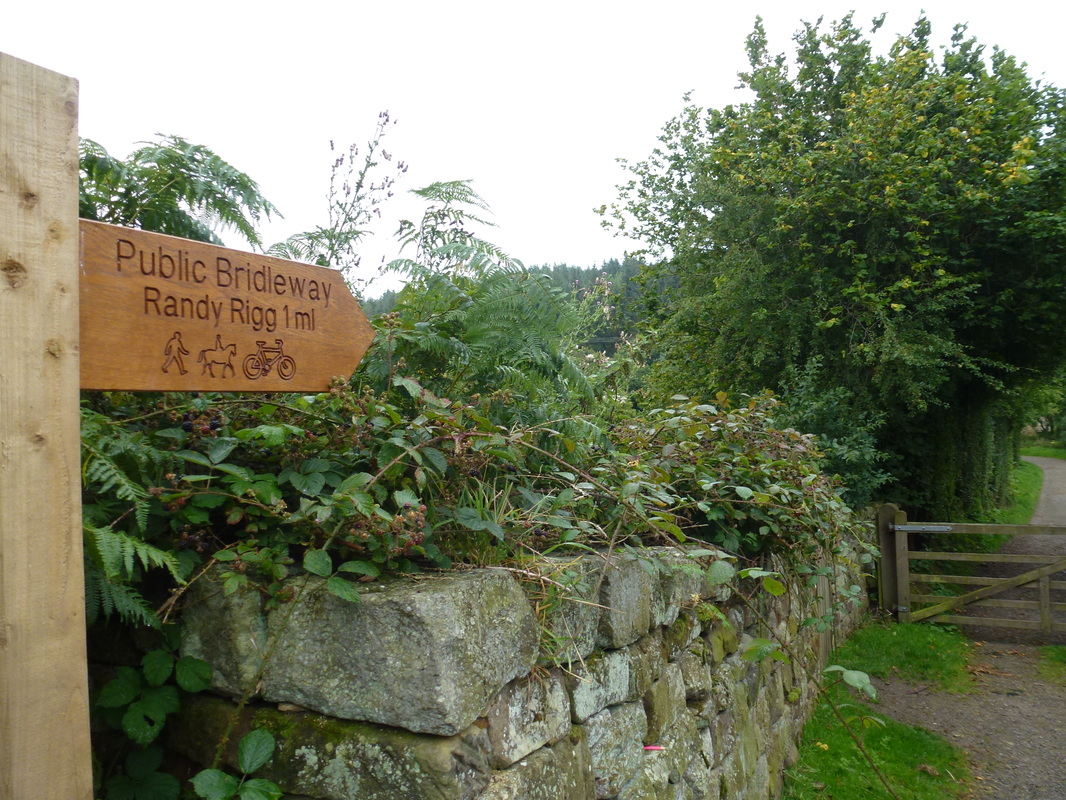 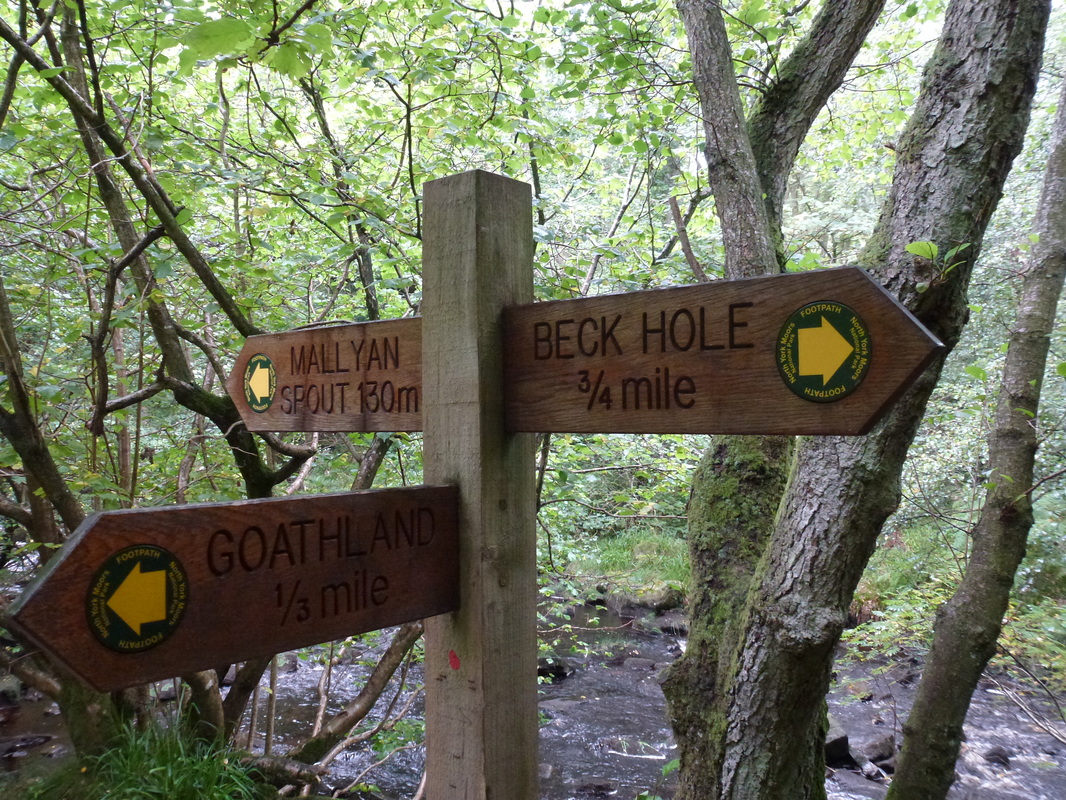 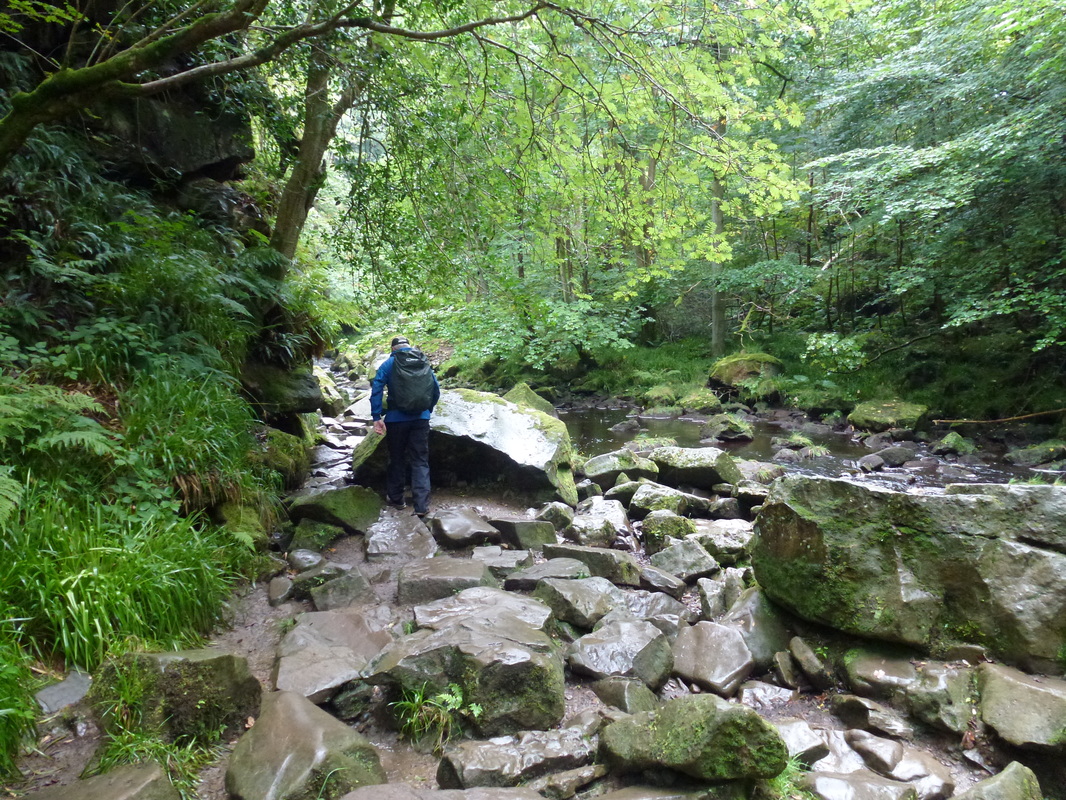 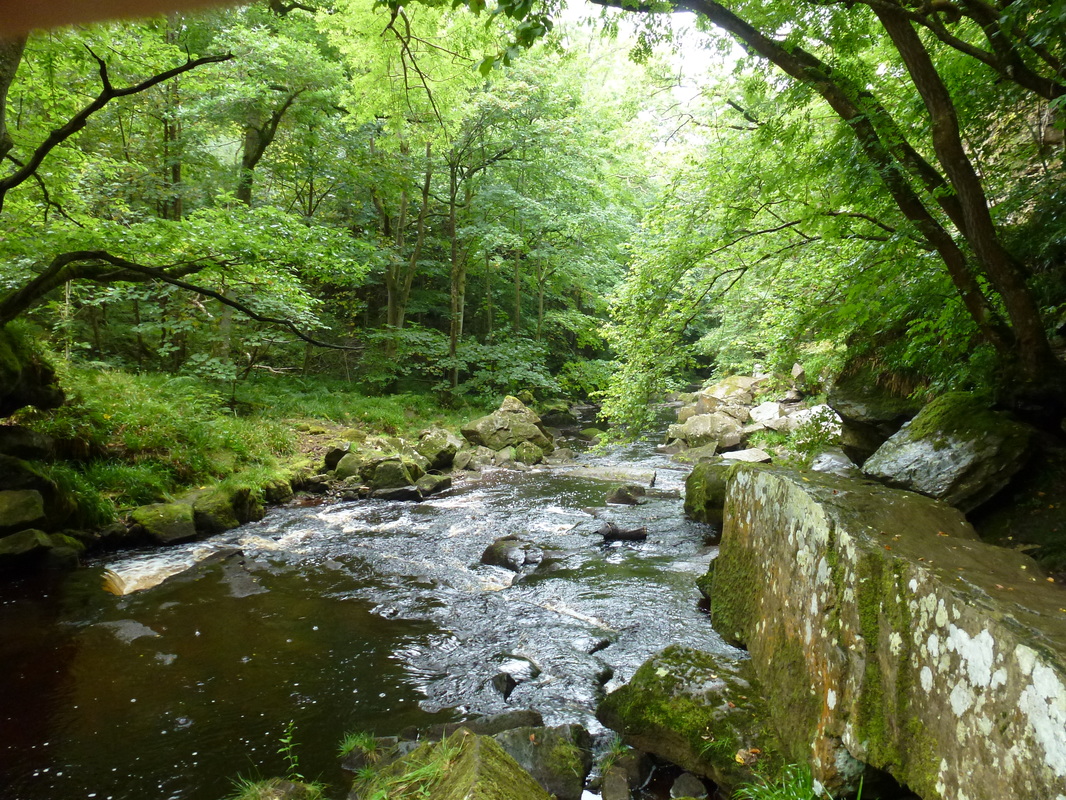 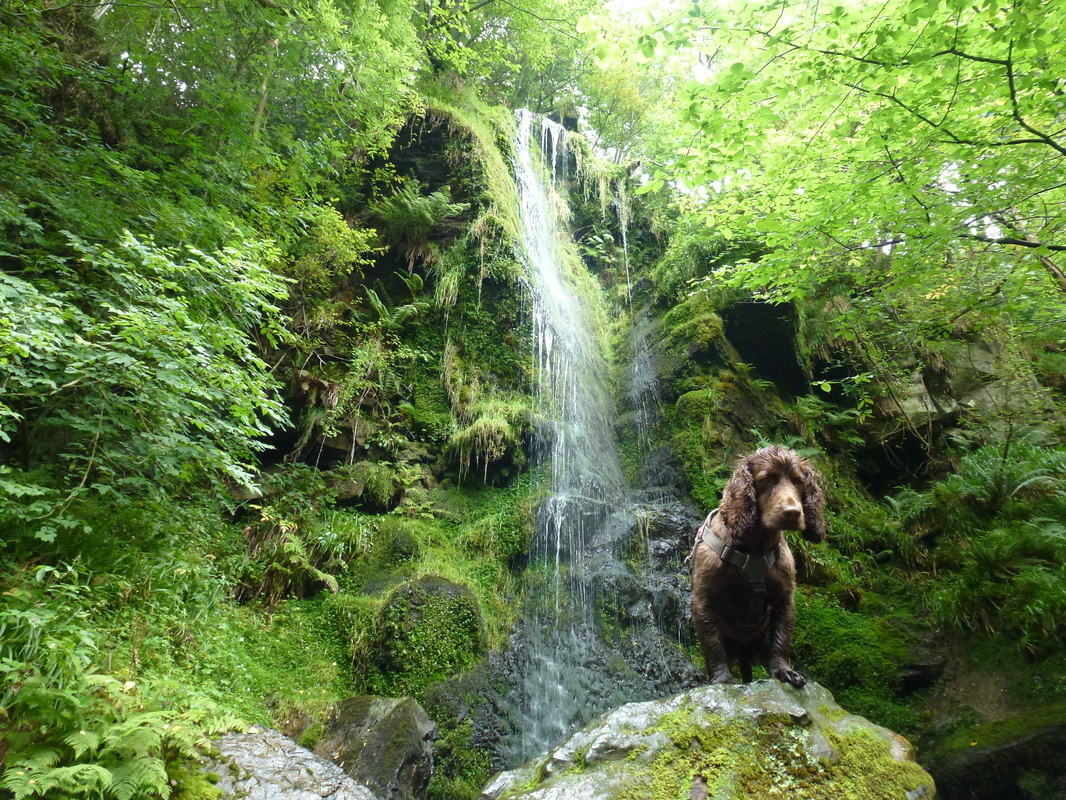 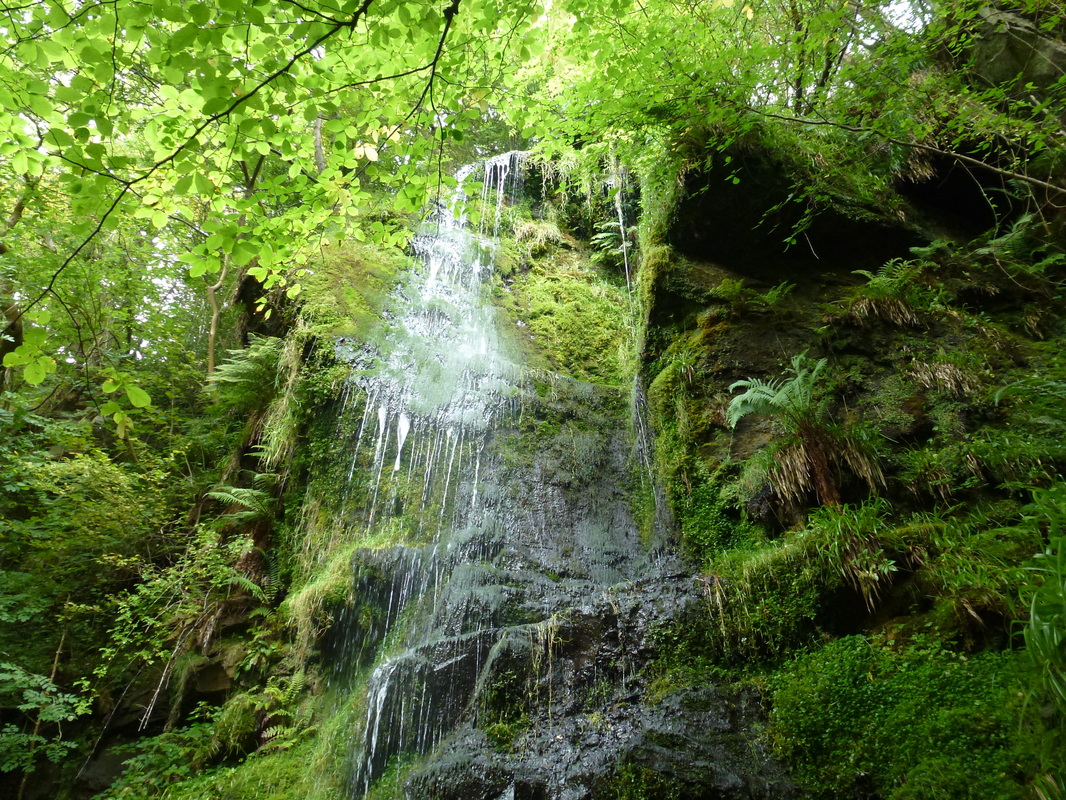 The Spout drops about 70 feet from New Wath Scar 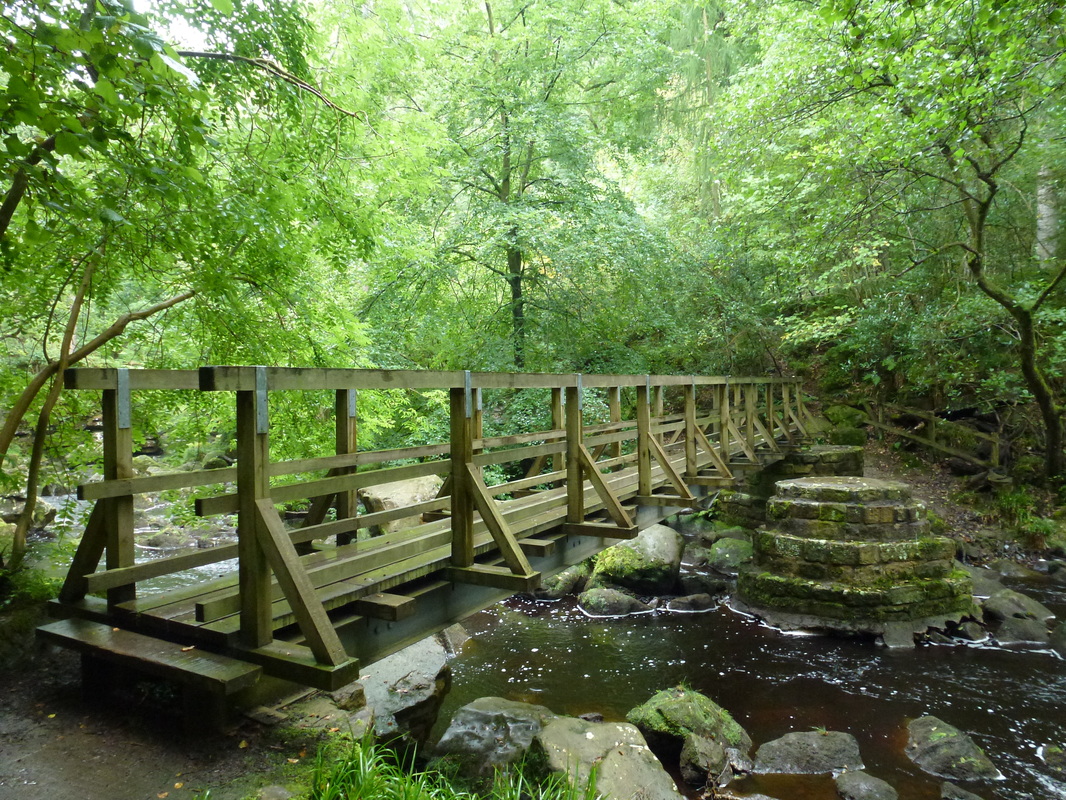 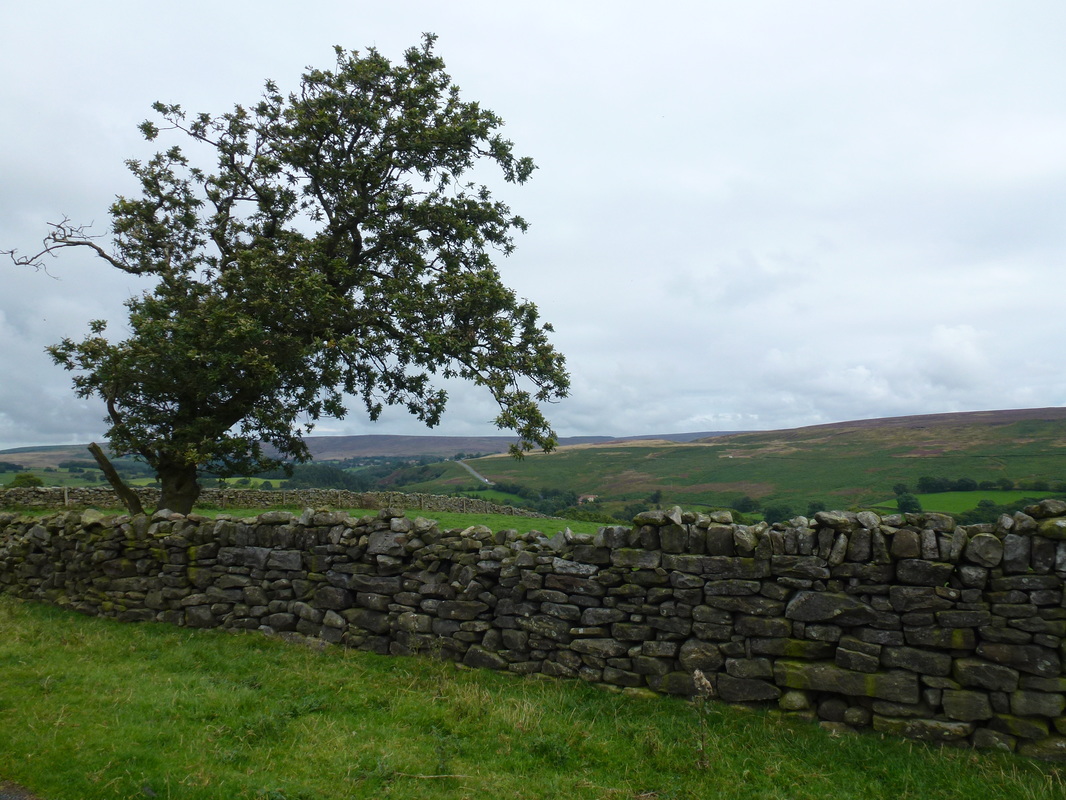 Nearing the start of the Roman Road 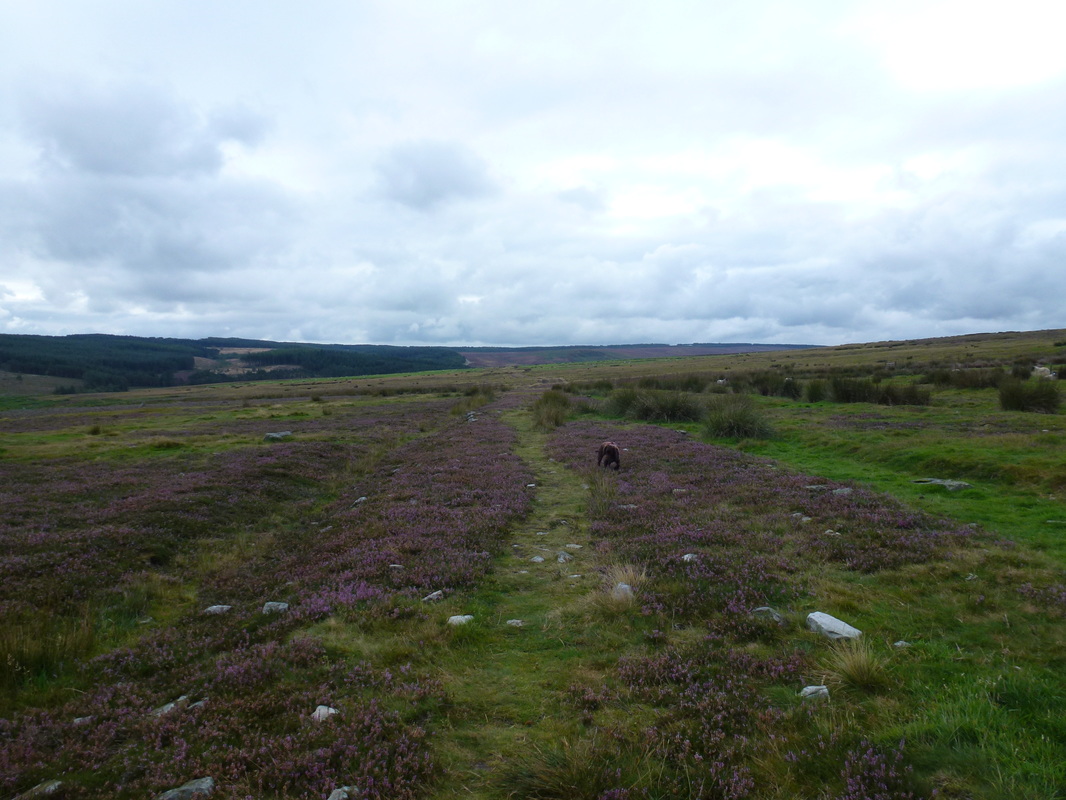 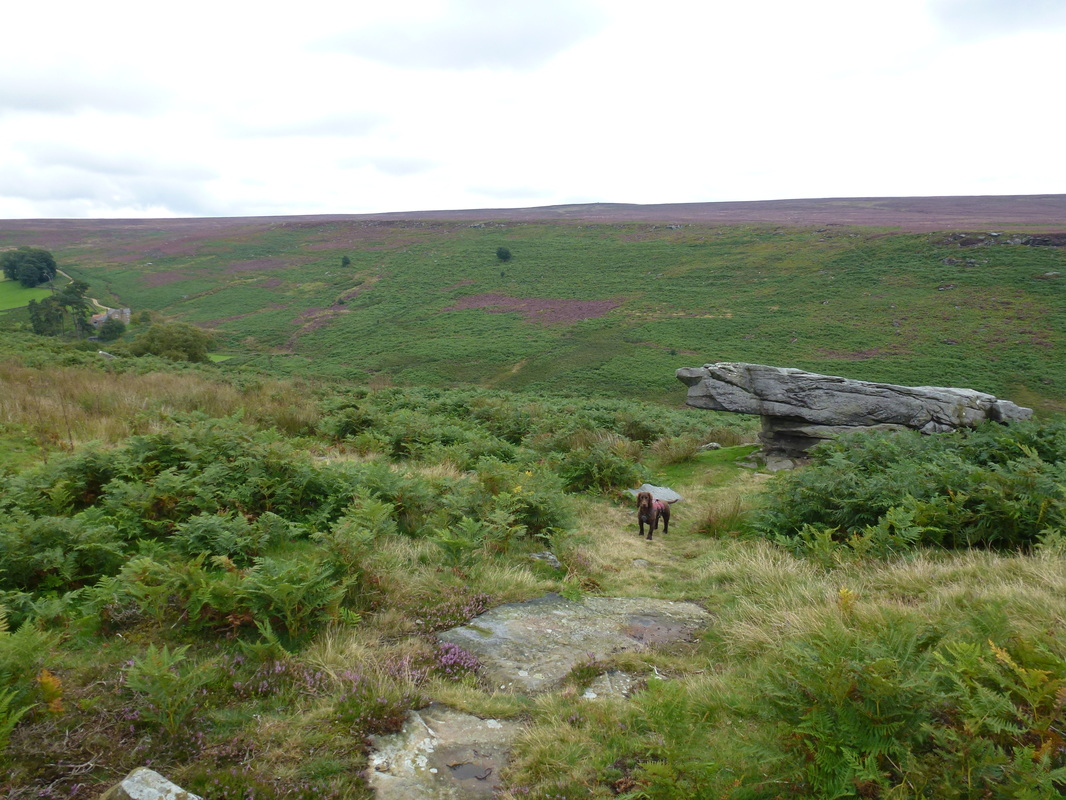 Leaving the Roman Road, the route headed down through the bracken to Wheeldale Beck 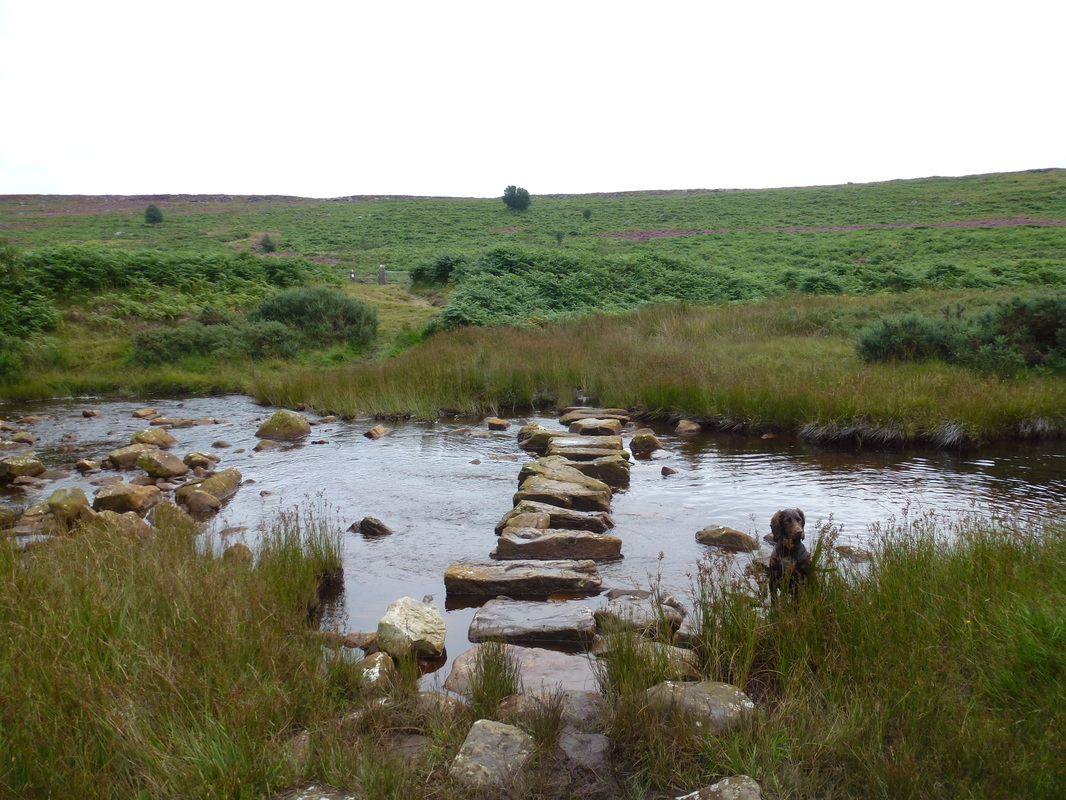 The Stepping Stones over Wheeldale Beck 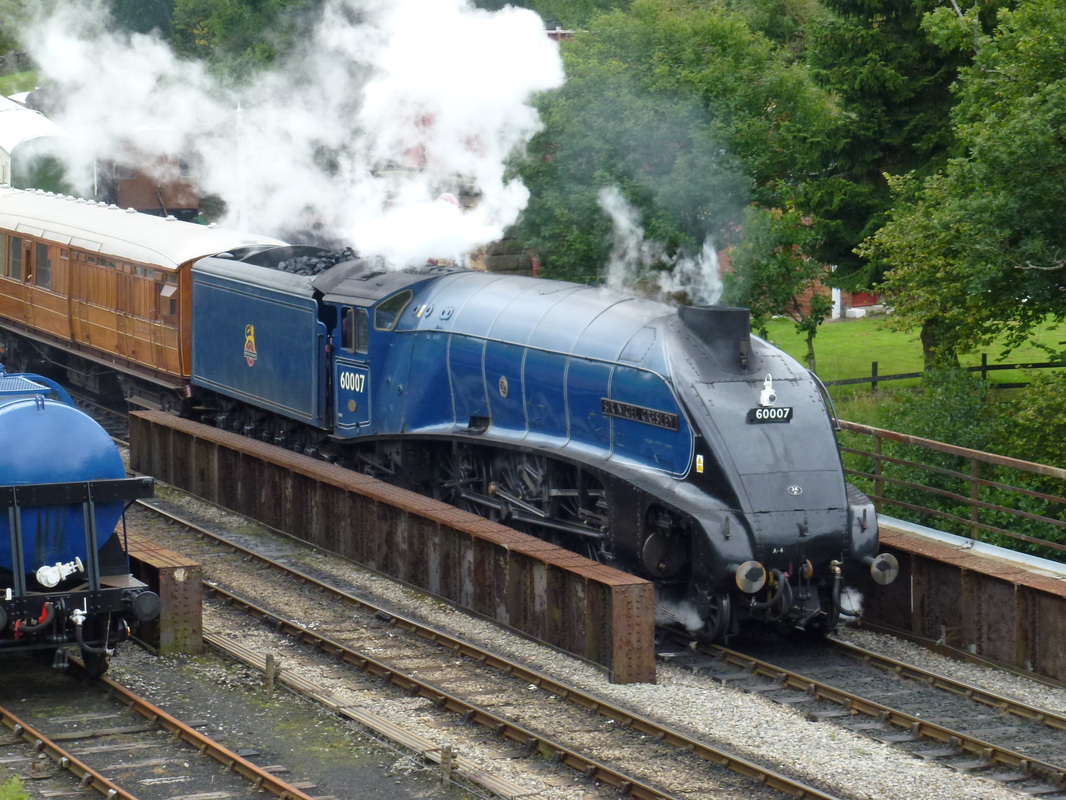 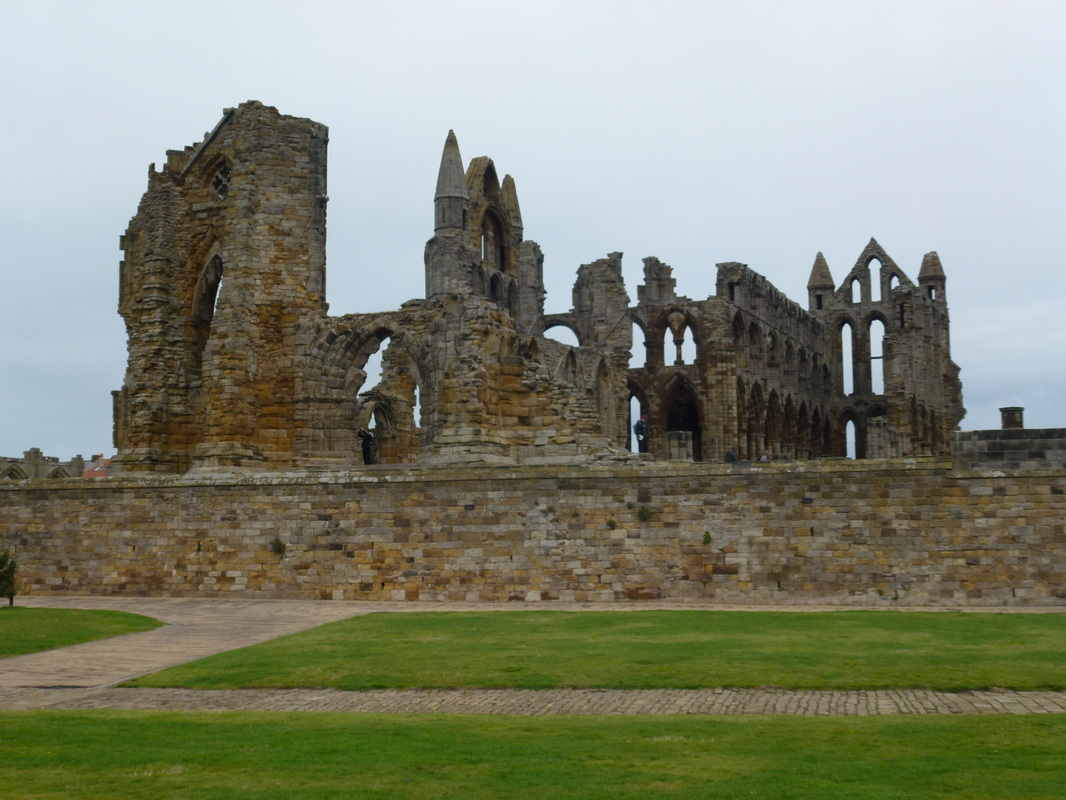