Kimmeridge Bay to Worth Matravers (8.3 miles) 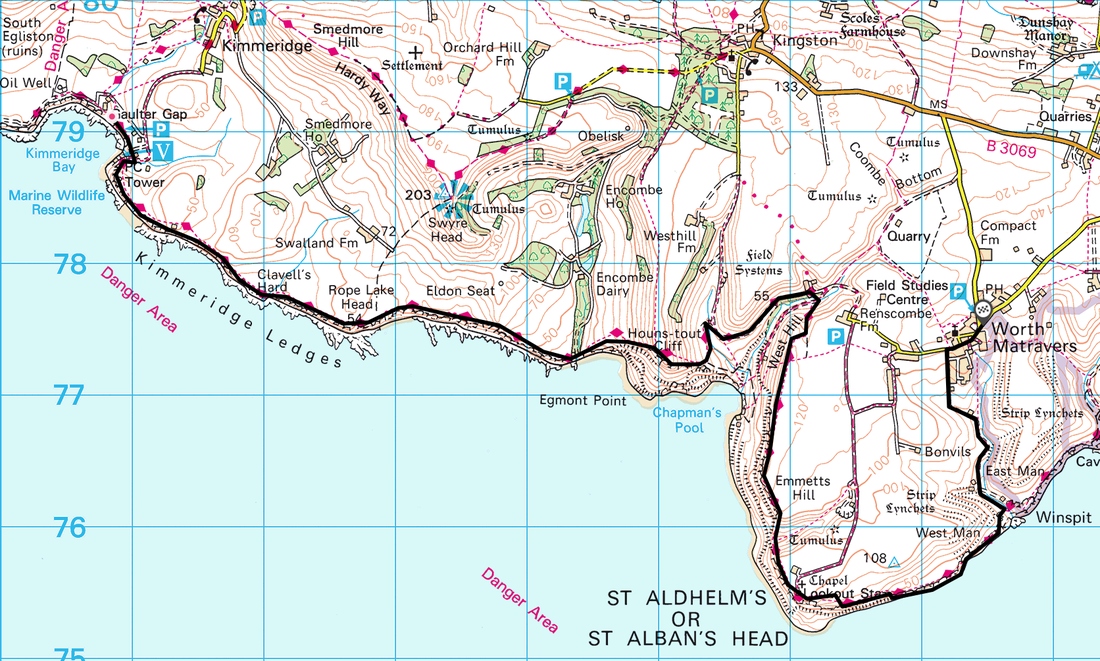 We wanted a better day weather wise today and despite the overcast start we were blessed with a warm, sunny afternoon. Pleasant stay at The Castle Inn where we enjoyed a good breakfast in company with lots of people and their dogs - the pub has got to be one of the most dog friendly we have stayed in. We had pre booked a taxi as we had to get over to Kimmeridge Bay to rejoin the path as we had already done the section from West Lulworth last week. We collected Nick from his campsite at Durdle Door and headed for Kimmeridge - as the range roads were closed this weekend, the taxi had to make a fairly long and convoluted (and pricey!) journey to get us to the start point.

Just below the Clavell Tower at the Car Park there was a Charity Event in full swing - we quickly realised we would not be alone on the path today and the first few miles were spent chatting and encouraging people who were simply out to help others and in turn thoroughly enjoy themselves. The walking was particularly enjoyable on this section along the Kimmeridge Ledges and we made steady progress although with an 8 or so mile day we were in no rush.

At Egmont Point we met up with our very good friends Dave, Katie & their pooch Coco. Dave & Katie had been our wedding day witnesses from 26 years ago - the two Dave's had served together in HMS Coventry between 1989 & 91. They had parked their camper van up near Worth Matravers and had walked out to meet up with us. It was from Egmont Point that the walk got a bit tougher as we climbed up the lung buster to Houns-tout Cliff which gave us a superb view down to Chapman's Pool. After making our way around the Chapman's Pool inlet and up on to West Hill there was a final extremely steep up and down to reach the fantastic viewpoint of St Aldhelm's Head.

From here Nick went to find his campsite and we arranged to meet him in Swanage tomorrow to walk the last few miles together to the finish at South Haven Point. The rest of us proceeded around the headland to West Man and then inland to Renscombe via Winspit where Dave & Katie had parked their van. After a lovely alfresco lunch sat outside the camper we said goodbye to Dave & Katie and then walked the short distance to Worth Matravers to check in to our B&B. With rucksacks deposited at our digs we walked along the road to The Square & Compass for a couple of drinks and some food - only one thing on their menu - Pasties!!​ 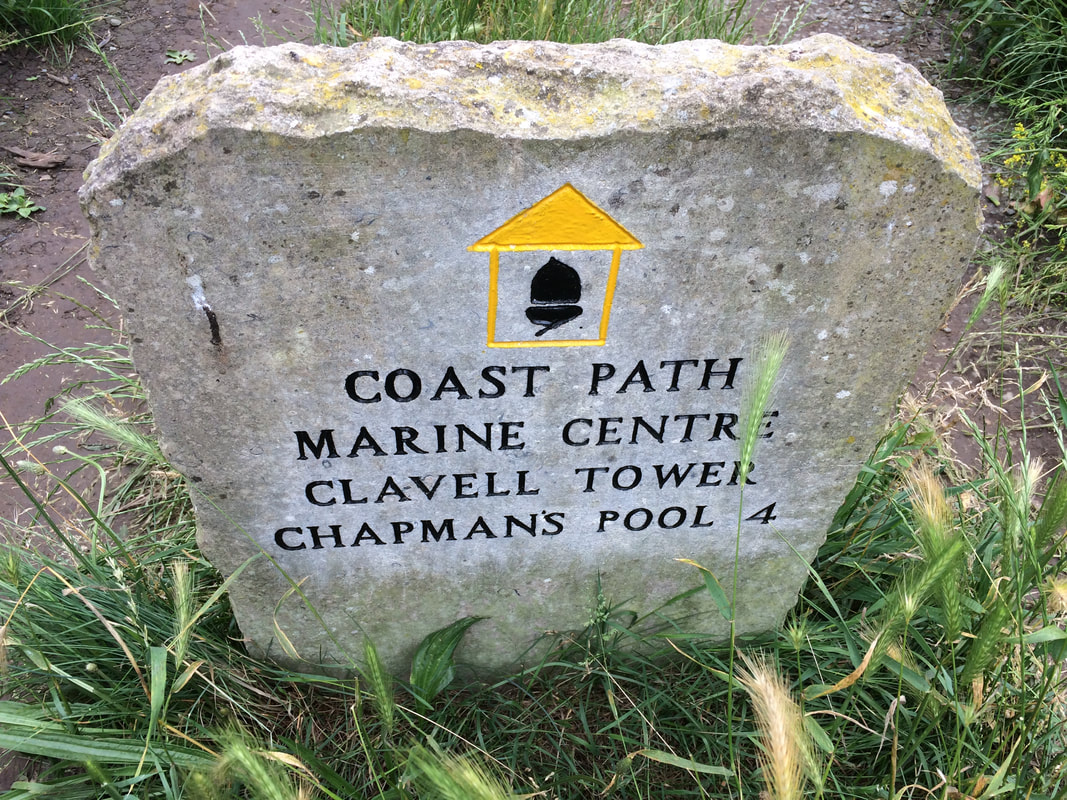 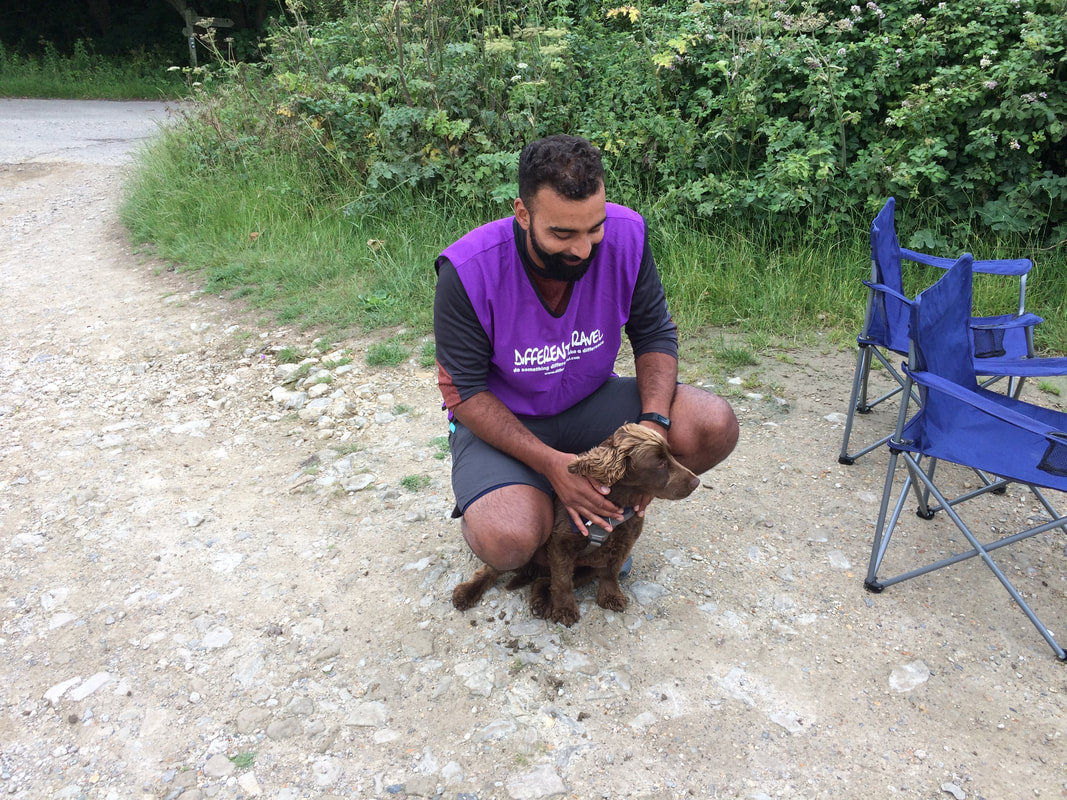 As usual, anyone he met made a right old fuss of him - this was at the Charity Walk Check Point 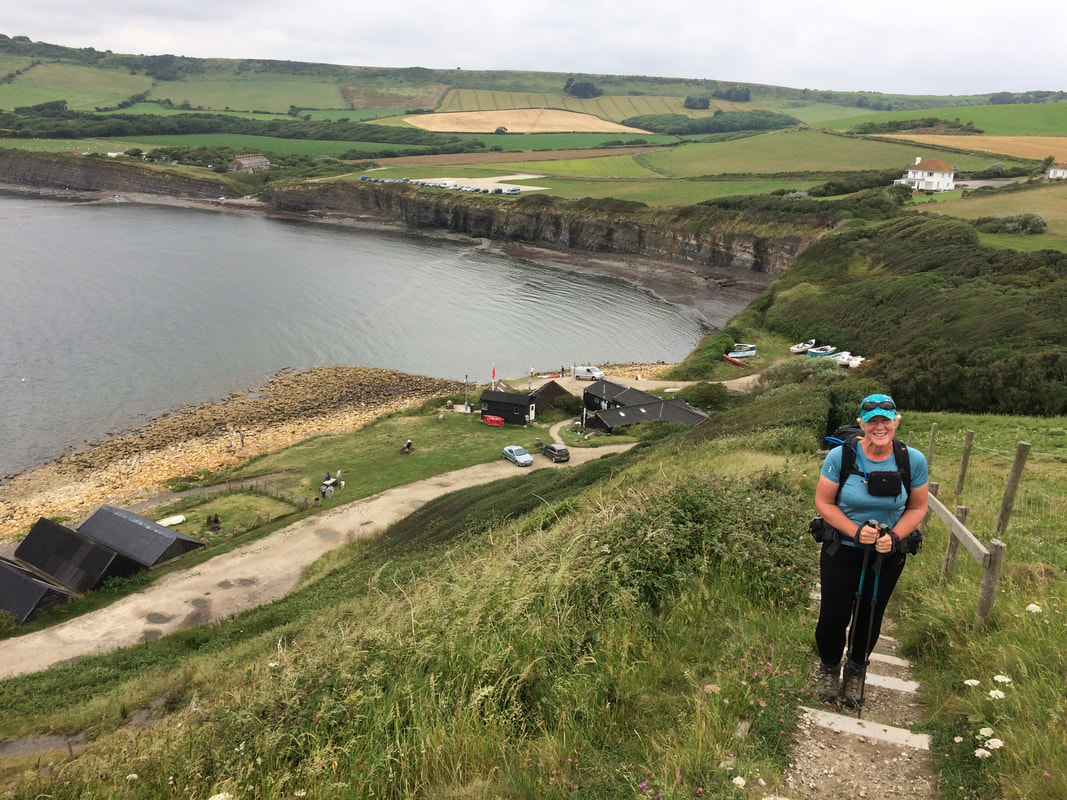 Heading out of Kimmeridge with the Marine Centre below 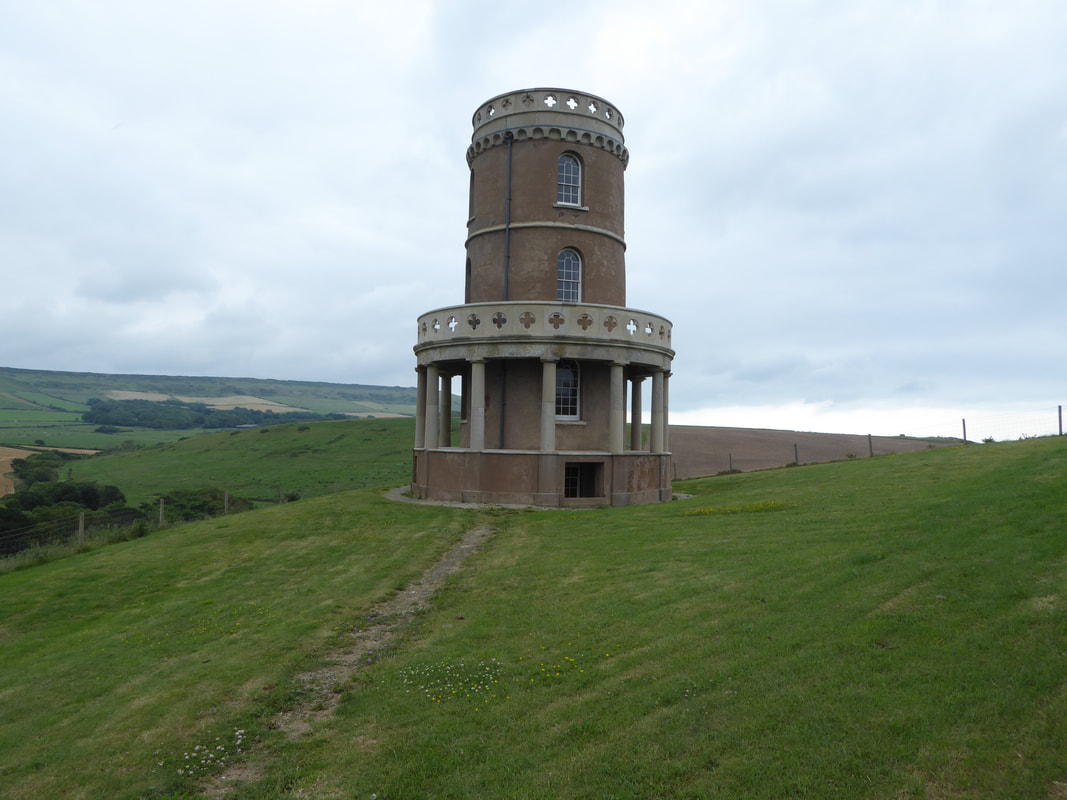 The Clavell Tower above Kimmeridge Bay
The building is a Grade II listed Tuscan style tower which was built in 1830.  It is now a Landmark Trust property and in 2006 to 2008 was moved 25 metres back from the crumbling cliff edge.  It is now a holiday let and once starred in the music video for The Style Council track "Boy Who Cried Wolf" 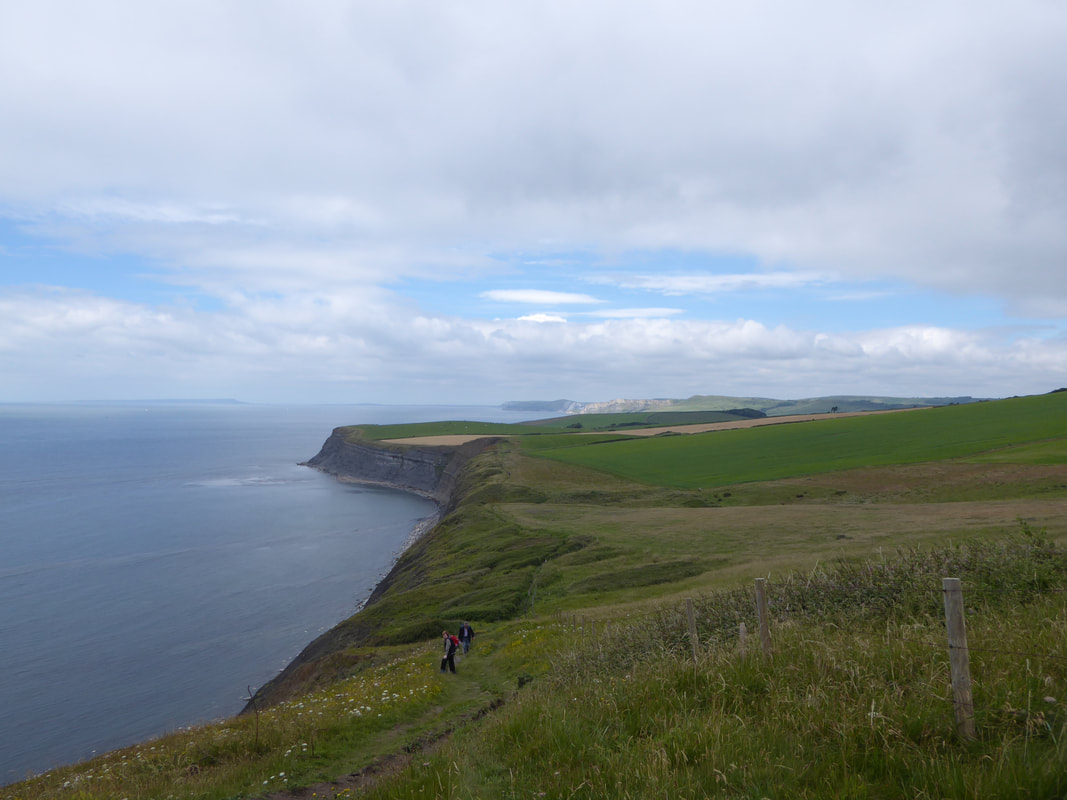 Looking back to Rope Lake Head 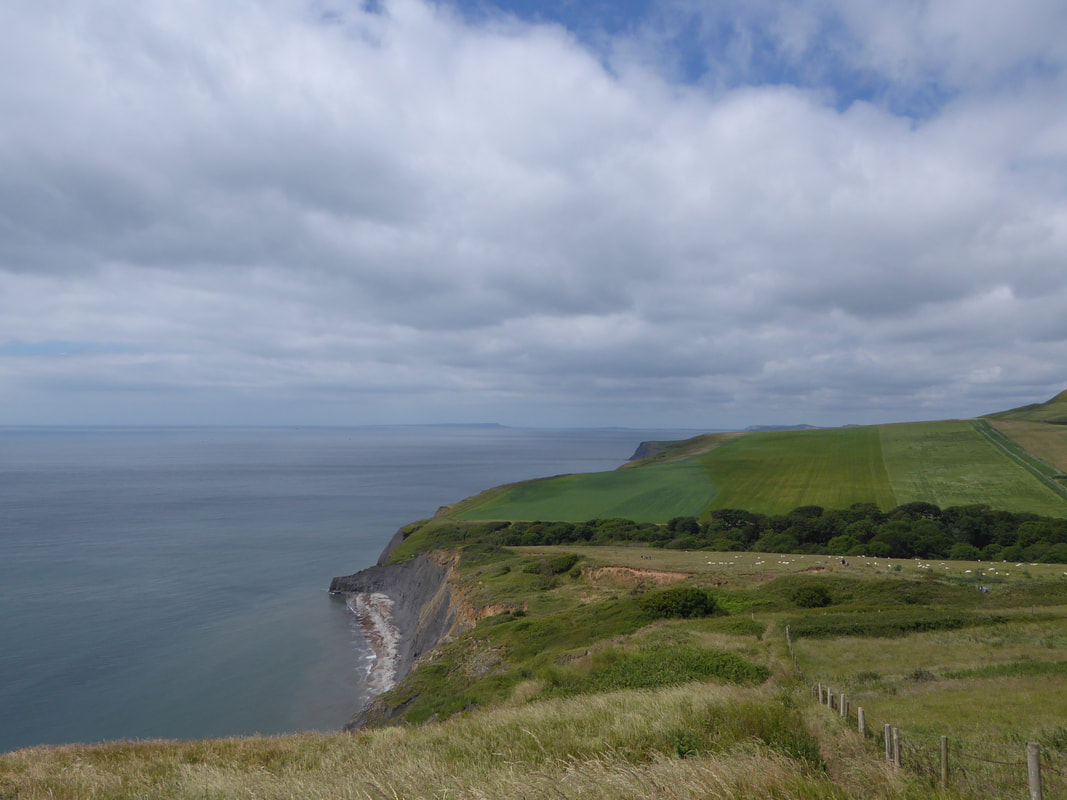 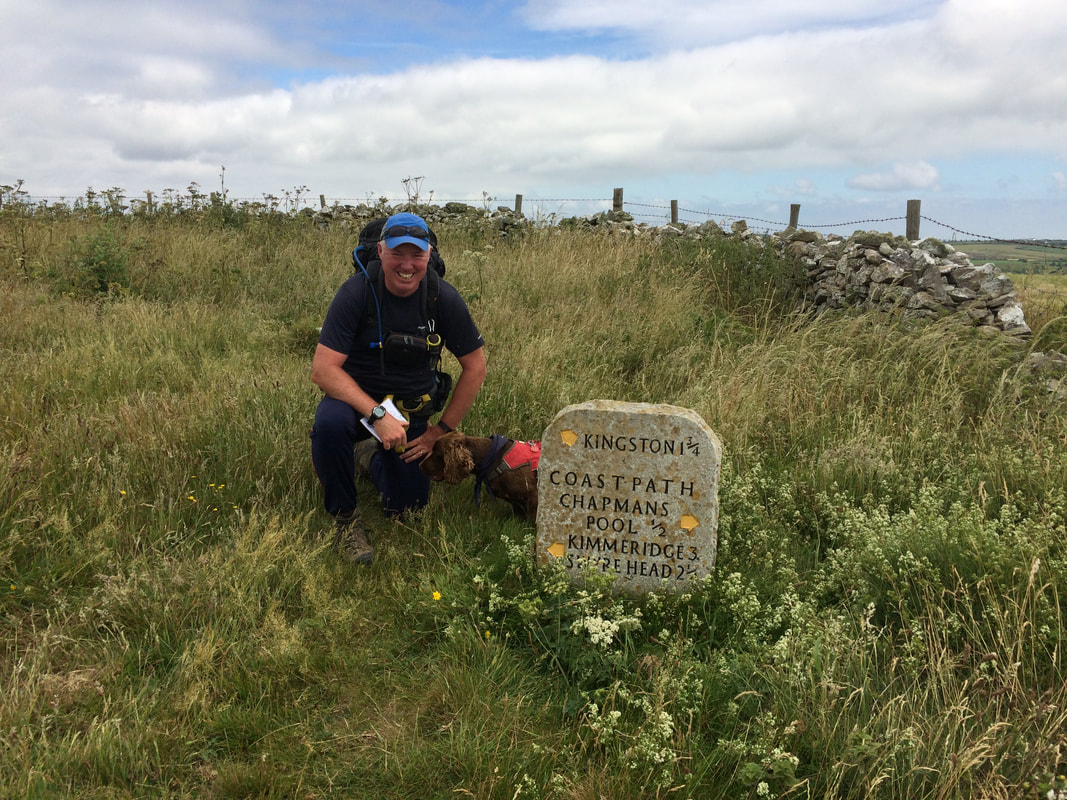 The weather was improving now as we neared Chapman's Pool 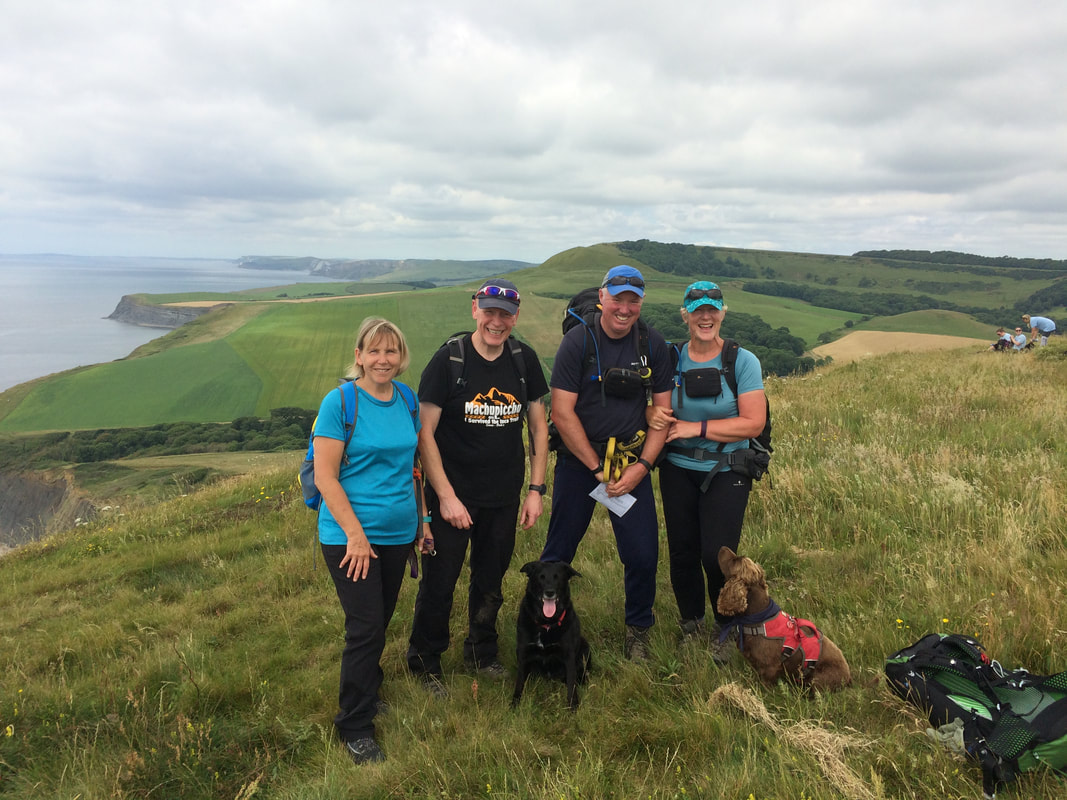 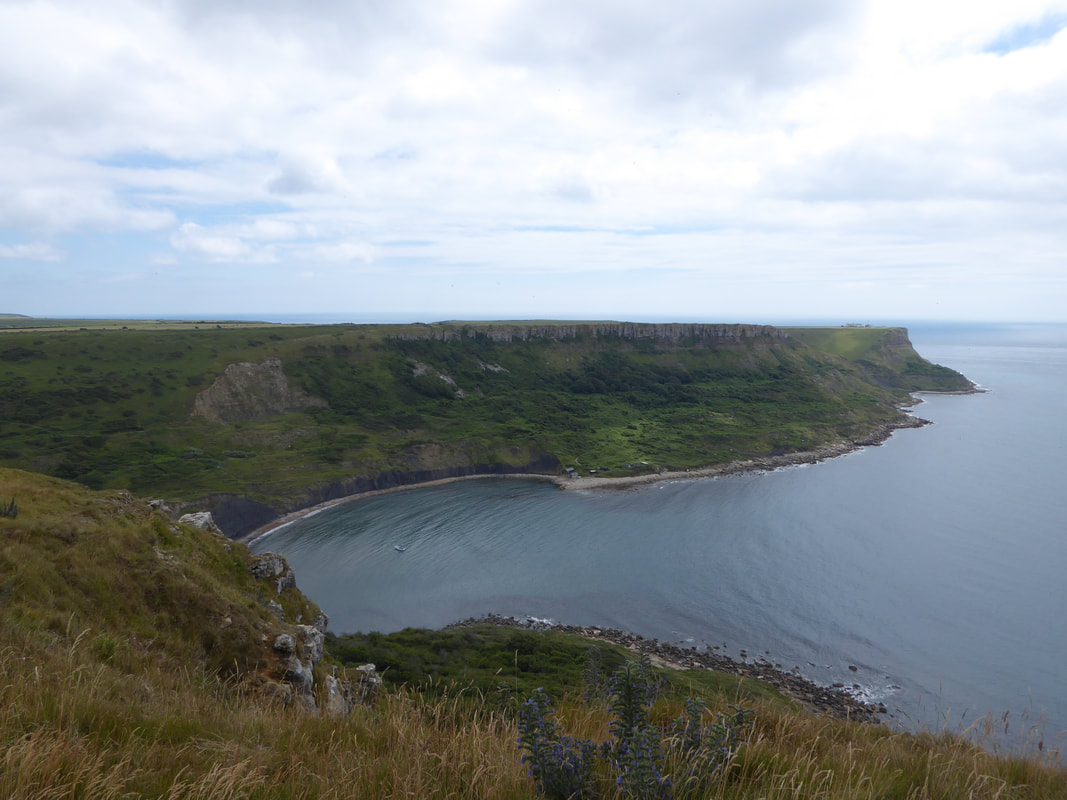 Chapman's Pool
There was a lifeboat station here but it closed in 1880 for many reasons, one of which was there were not enough local volunteers to man it 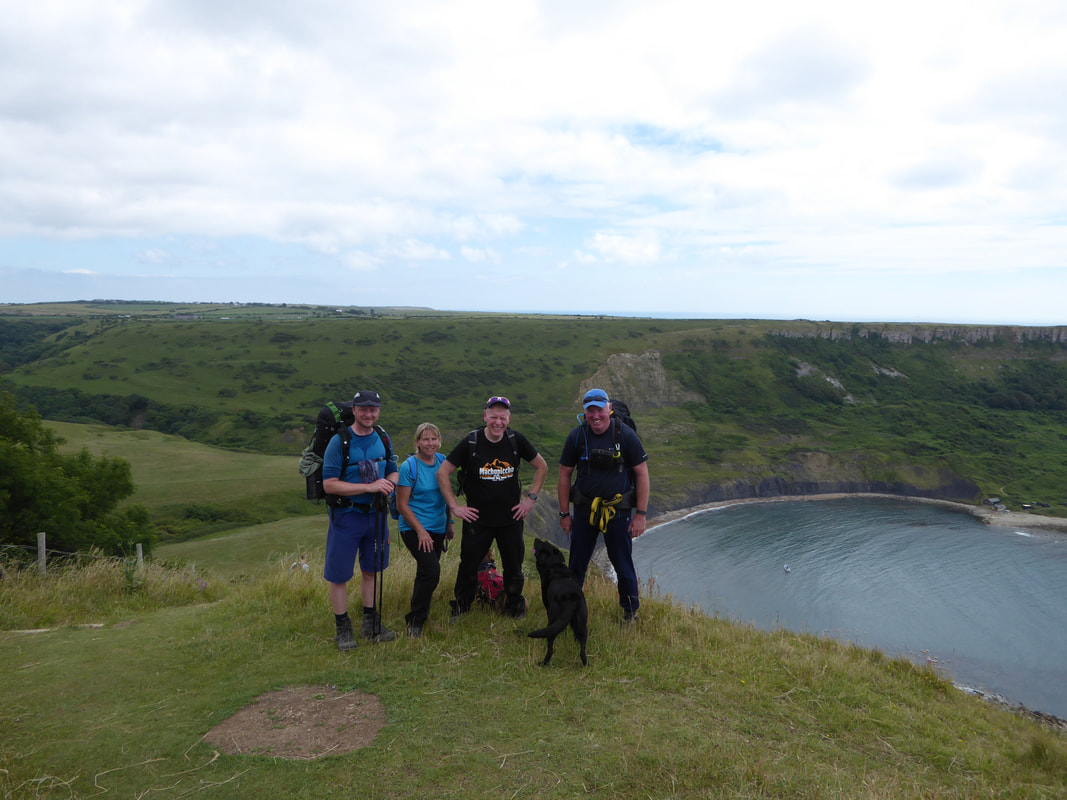 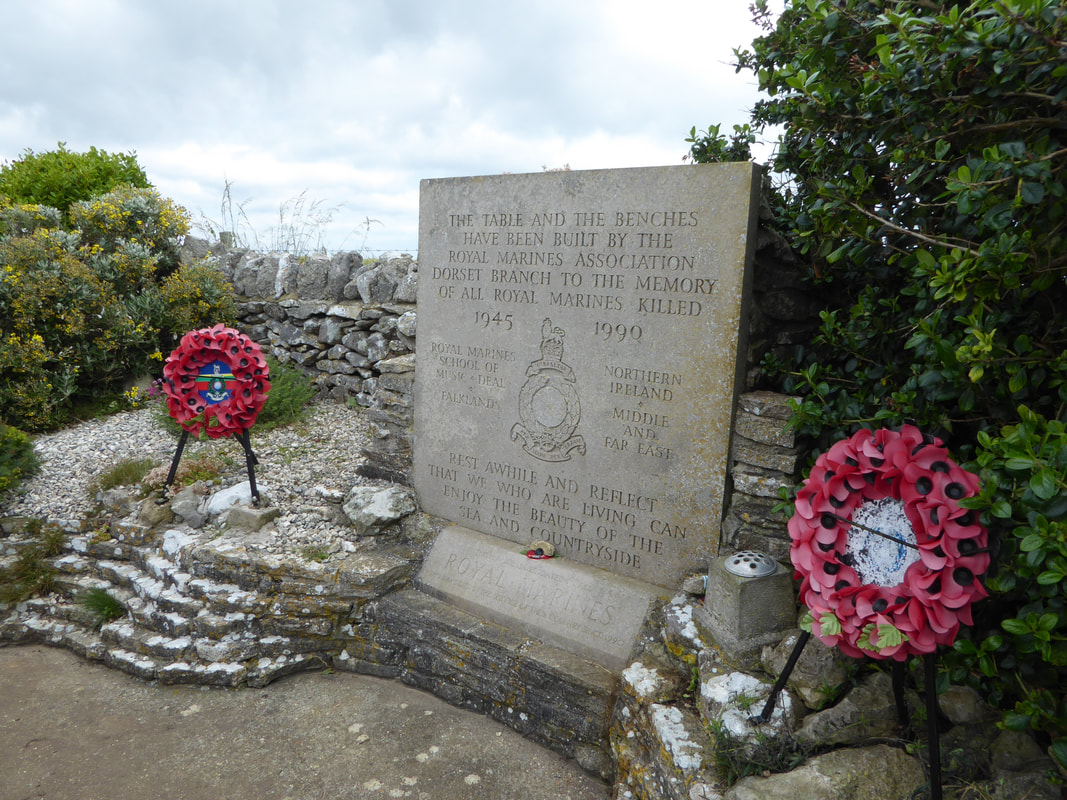 The Emmett's Hill Royal Marine Memorial Garden
The garden was initiated following the 1989 IRA attack on the Royal Marines Band Service training centre at Deal in Kent.
The memorial now remembers all Royal Marines who made the ultimate sacrifice in all conflicts. 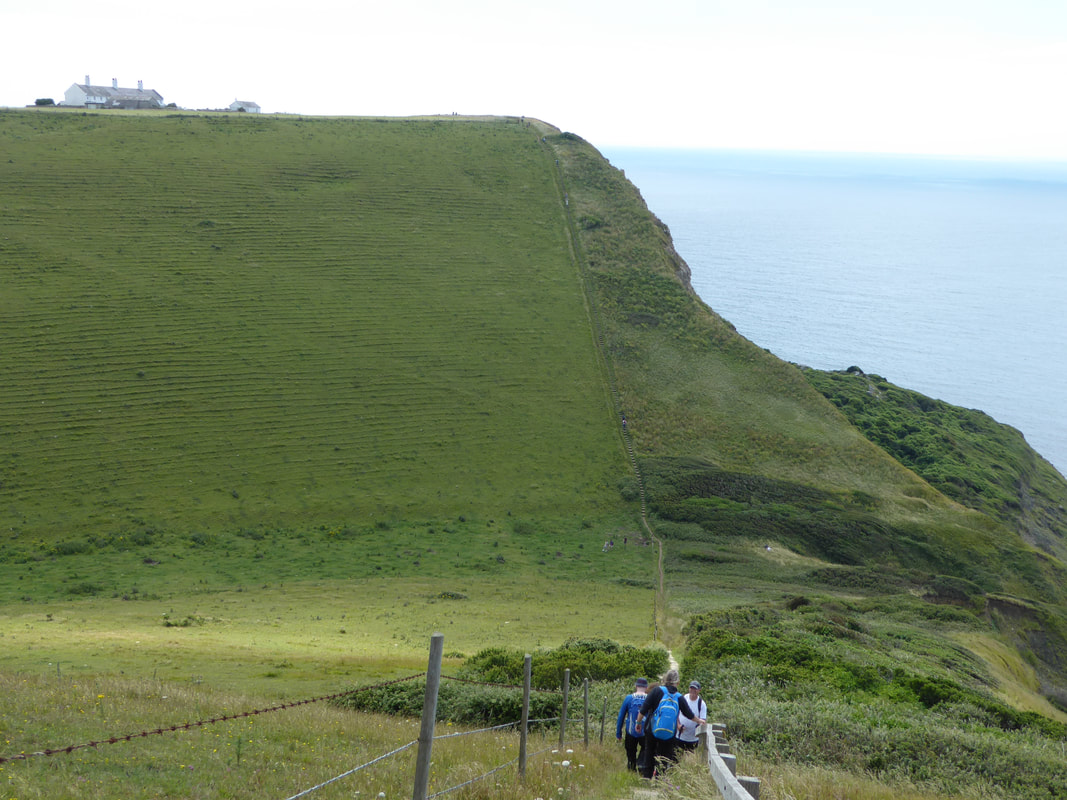 The very steep 'down & up" to St Aldhelm's Head 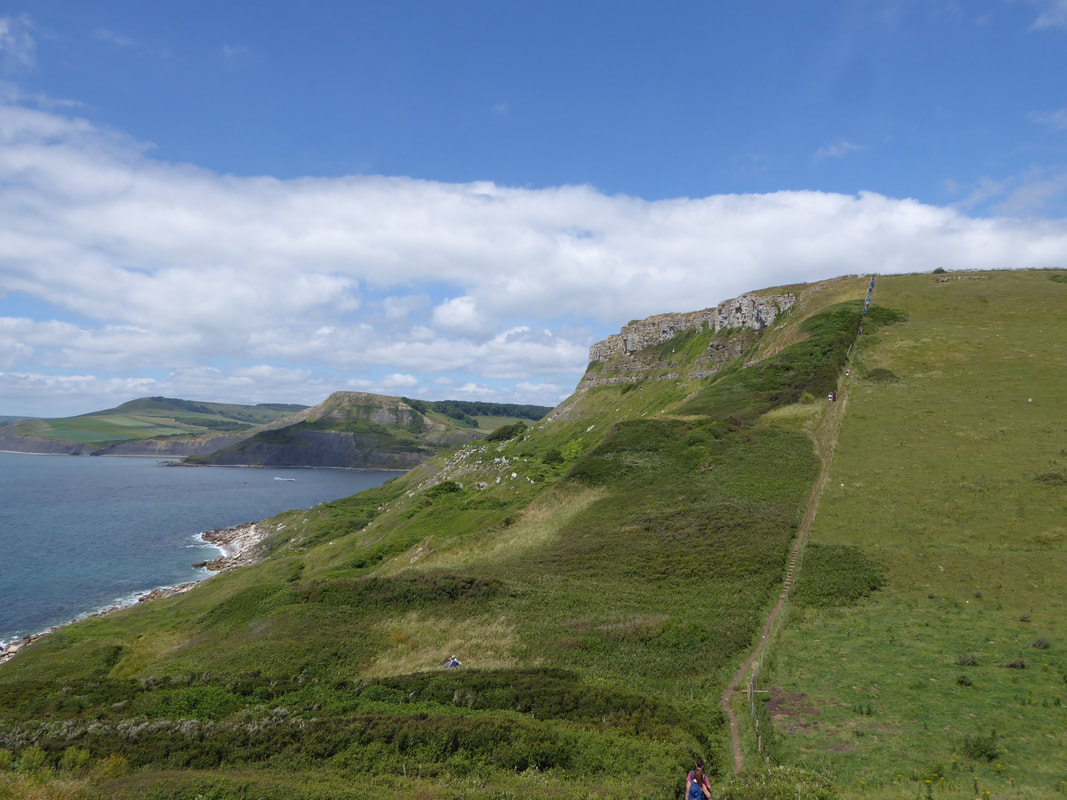 Looking back to the descent from Emmett's Hill above 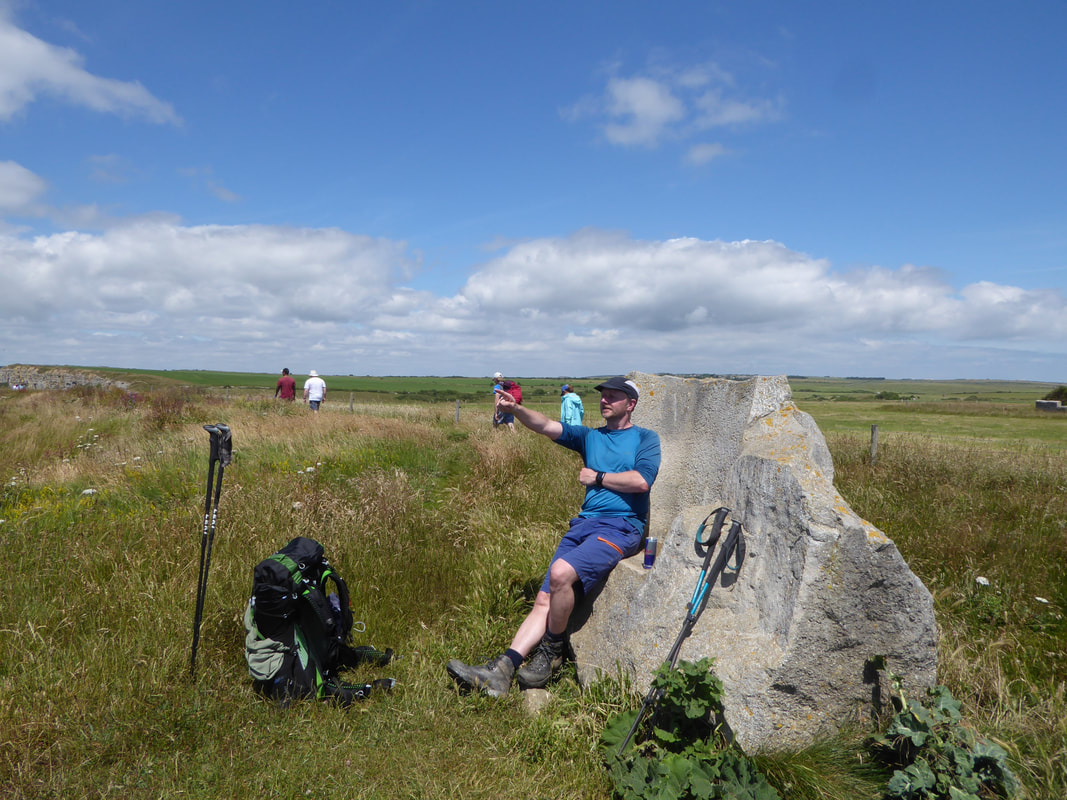 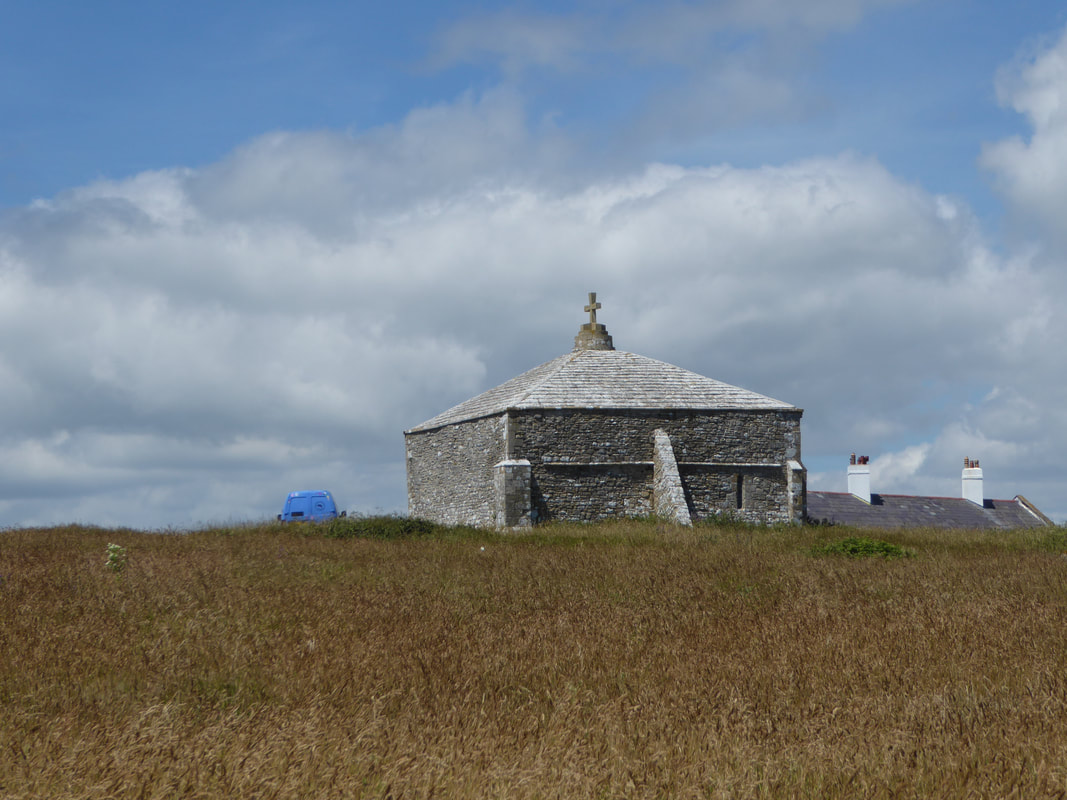 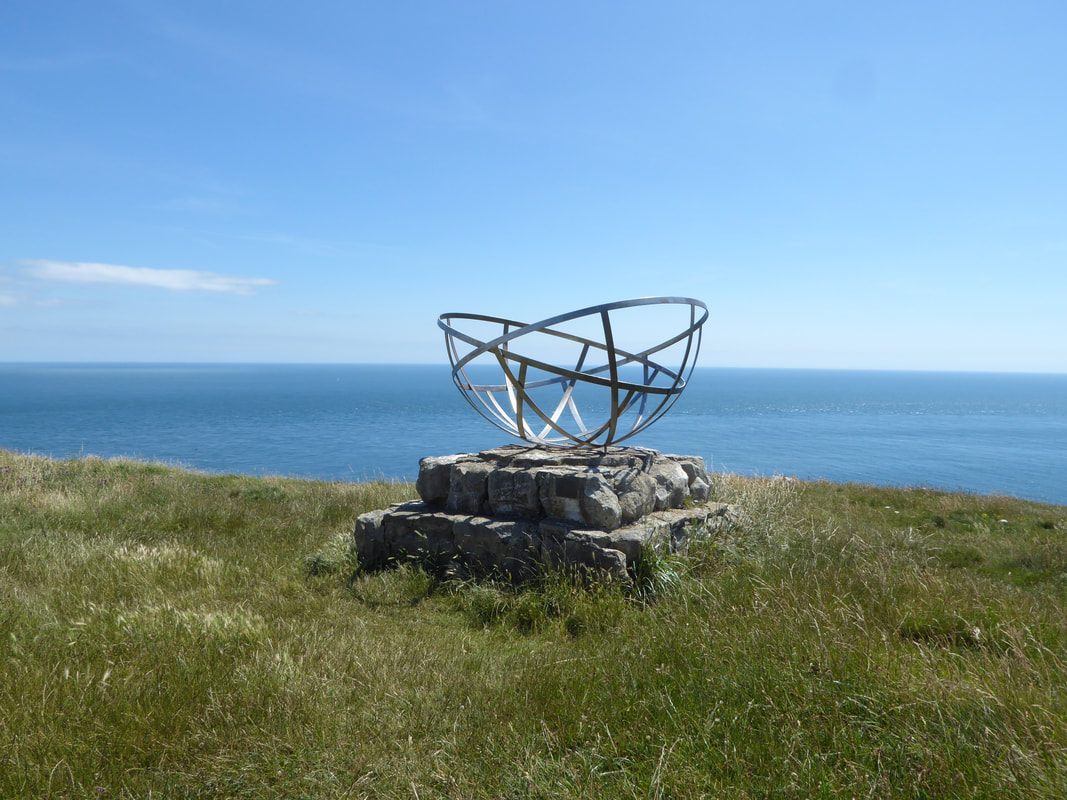 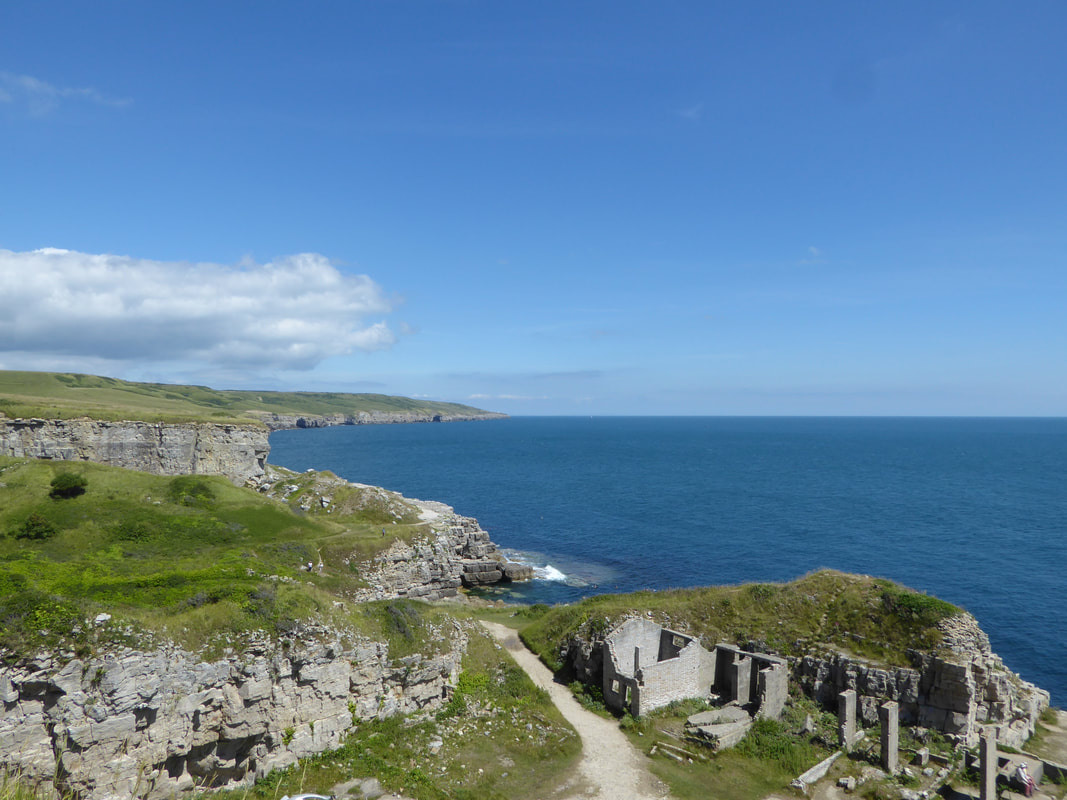 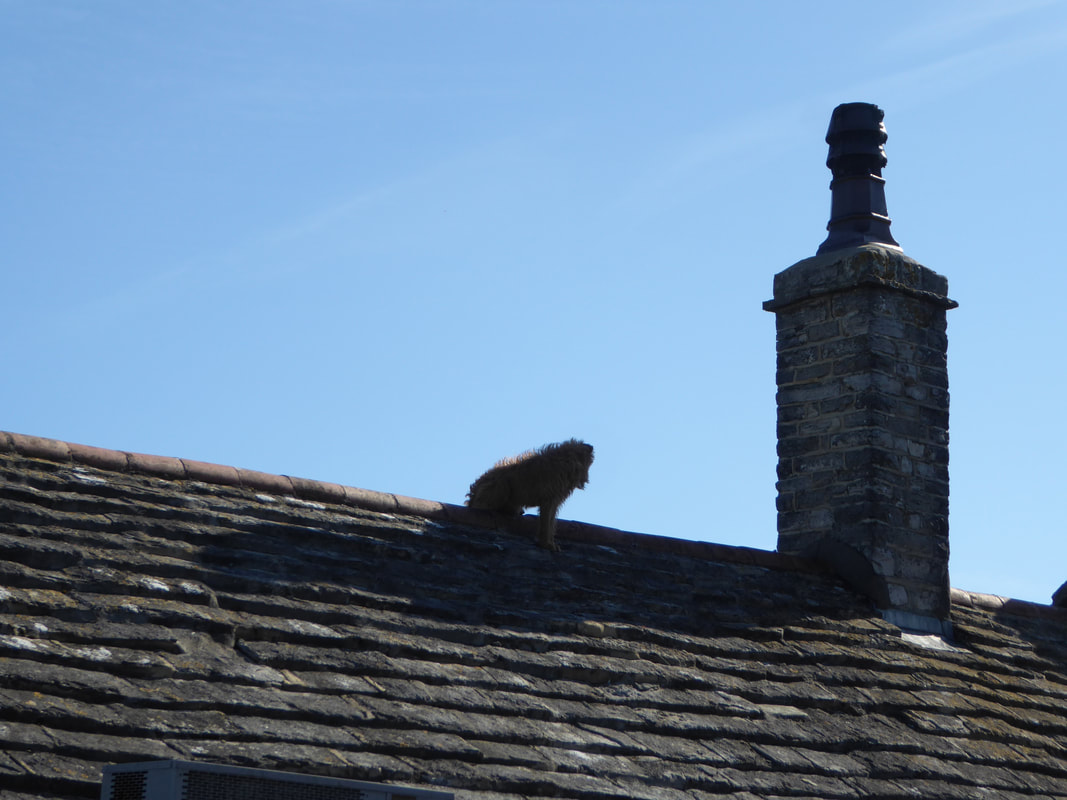 Unusual roof dweller at The Square & Compass in Worth Matravers
I went and spoke to the Landlord in the pub "Do you know there's a dog on your roof?"  He replied "I don't, but if you can hum it, I can play it"
​(I'm here all week)
Overnight Accommodation 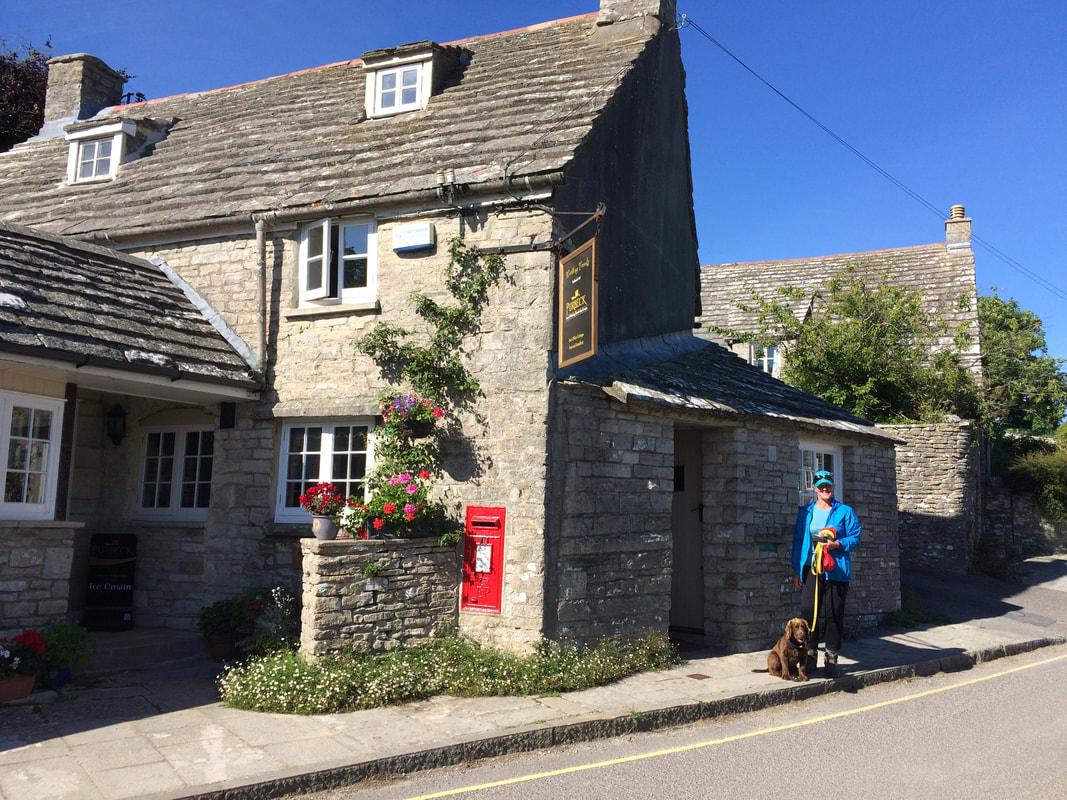