High level ridge walking on mainly good paths. The path over to Waun Fach from Pen Y Gadair Fawr can be boggy.

​​​​​Map
​​
OL13 - Brecon Beacons National Park (Eastern Area)
​If the above GPX file fails to download or presents itself as an XML file once downloaded then please feel free to contact me and I will send you the GPX file via e-mail.  ​​ 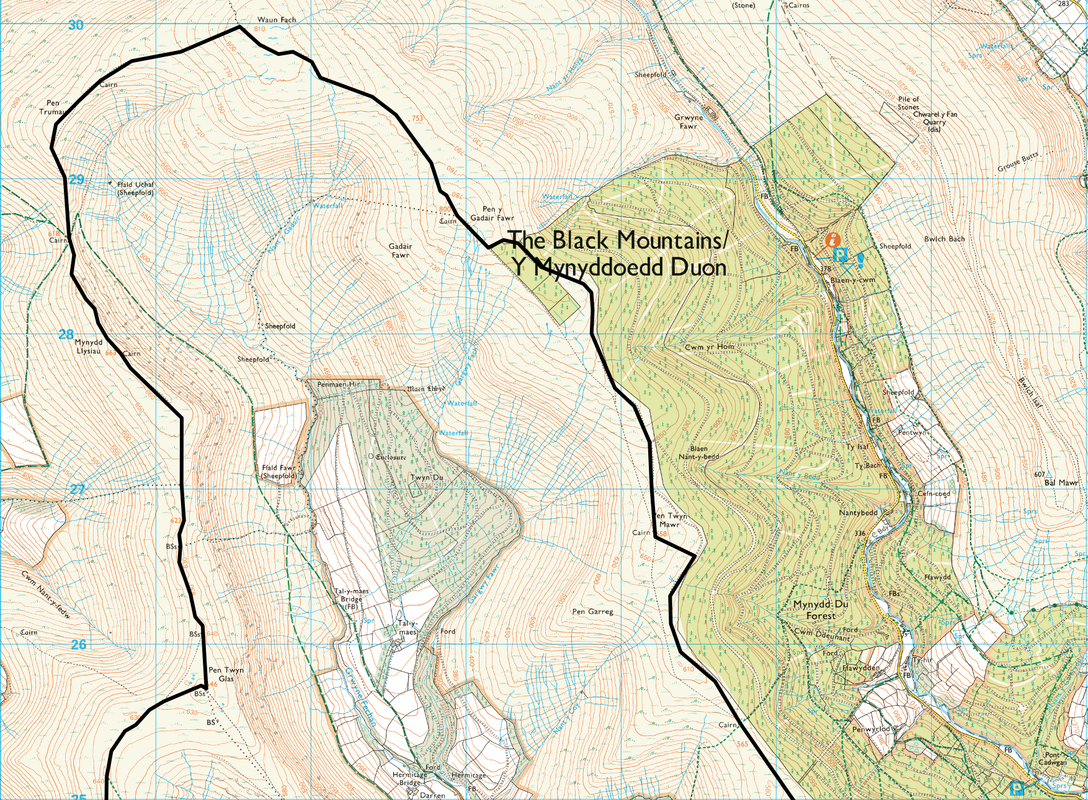 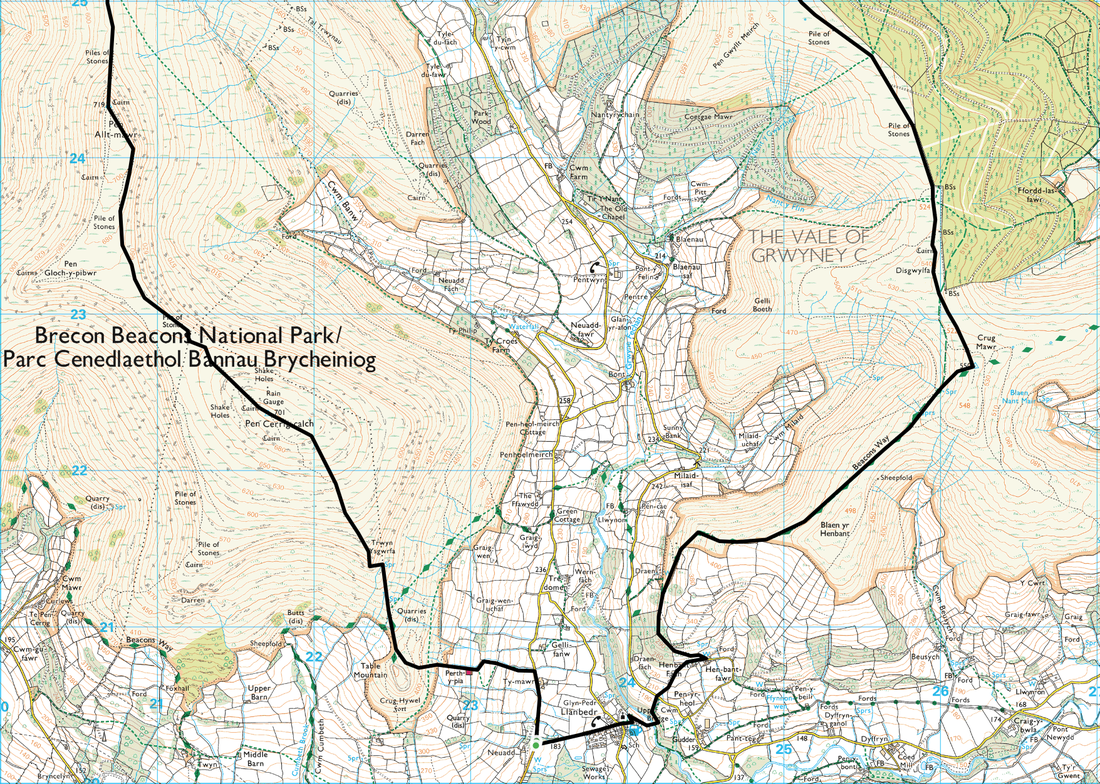 ​The Black Mountains are a soaring cluster of lofty peaks tucked away in the North Eastern corner of the Brecon Beacons National Park. They may not be as famous or as well trodden as the likes of Pen y Fan and Cribyn, nevertheless there is good walking to be had here and the peaks offer tremendous views. At 17 miles, this horseshoe is a bit of a slog but throughout the walk you will have the feeling of solitude on a fantastic ridge walk that is an absolute pleasure from start to finish. Yes it is a long way but make a full day of it and take your time.

The walk started from just above the village of Llanbedr near Crickhowell. There is parking in the village or, as we did, parking is available on the verge at the top of the road leading in to Llanbedr. We headed down to the village, past the picturesque church of St Peter, through woodland and soon emerged at a field just below the pretty turreted house at Henbant Fach. Leaving the house, we slanted up along a sunken path to emerge on to open hillside and were greeted by a superb view over to Table Mountain and Pen Cerrig-calch. Soon enough the first summit of the day came into view and we made our way through the heather to reach to top of Crug Mawr. The summit granted us a view over the entire route and we made our way off heading north to the corner of Mynydd du Forest where there was a good path over Pen Twyn Mawr all the way to Pen Y Gadair Fawr. The path seemed to go on forever, however the views over to the west kept us going.

Reaching Pen Y Gadair Fawr there was a fabulous view over towards Pen Y Fan and Cribyn and we were able to see clearly our path over to Waun Fach but could well understand that it would be important to take a bearing on Waun Fach if visibility was poor. There was now an easy transit over somewhat boggy ground to reach the flat and windy summit of Waun Fach, the highest peak in the region. Here there was an upturned Trig Point, such a shame the OS have not seen fit to repair it. Leaving Waun Fach, we now headed west to drop down to the summit of Pen Trumau, before heading down further to reach the col and meet the path that comes up from Pengenffordd, which is marked by a large cairn. There was now a gentle rise on a good path to the summit of Mynydd Llysiau before a delightful transit over to Pen Twyn Glas that is topped by a pair of boundary/grave stones that seem quite odd on the summit.

Leaving the stones we headed south west before making the steep ascent to the Trig Point on the summit of Pen Allt Mawr - again the views were superb. From here we needed to keep to the eastern edge of the ridge in order to stay on the correct path to the rocky summit of Pen Cerrig-calch. There now began a knee crunching descent as the path weaved down towards Table Mountain before heading left to reach the farm buildings at Perth-y-Pia. It was now a simple matter of turning right and following the road back to the parking place above Llanbedr.

This was a superb day out on a splendid ridge encompassing grand summits and exceptional views. As stated earlier, it is a long walk but once on the ridge the up and down is minimal and you get the chance to see a part of the region that is devoid of the crowds for the most part. Take your time and enjoy the walk - we did. 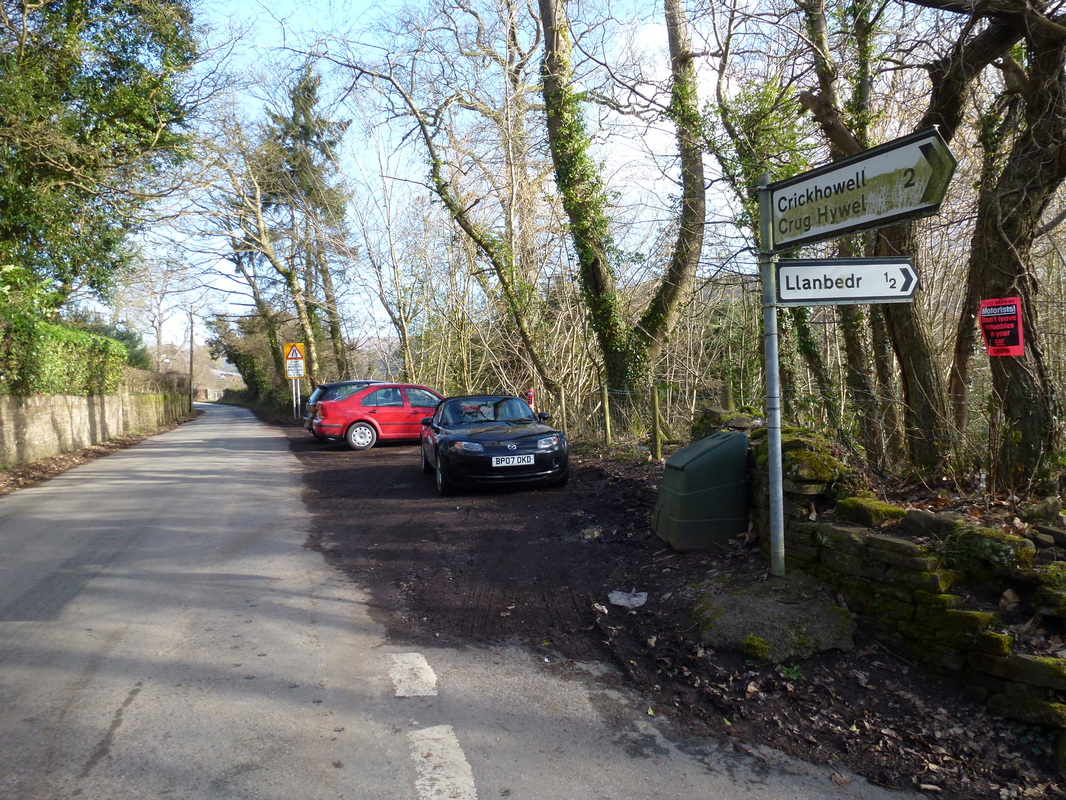 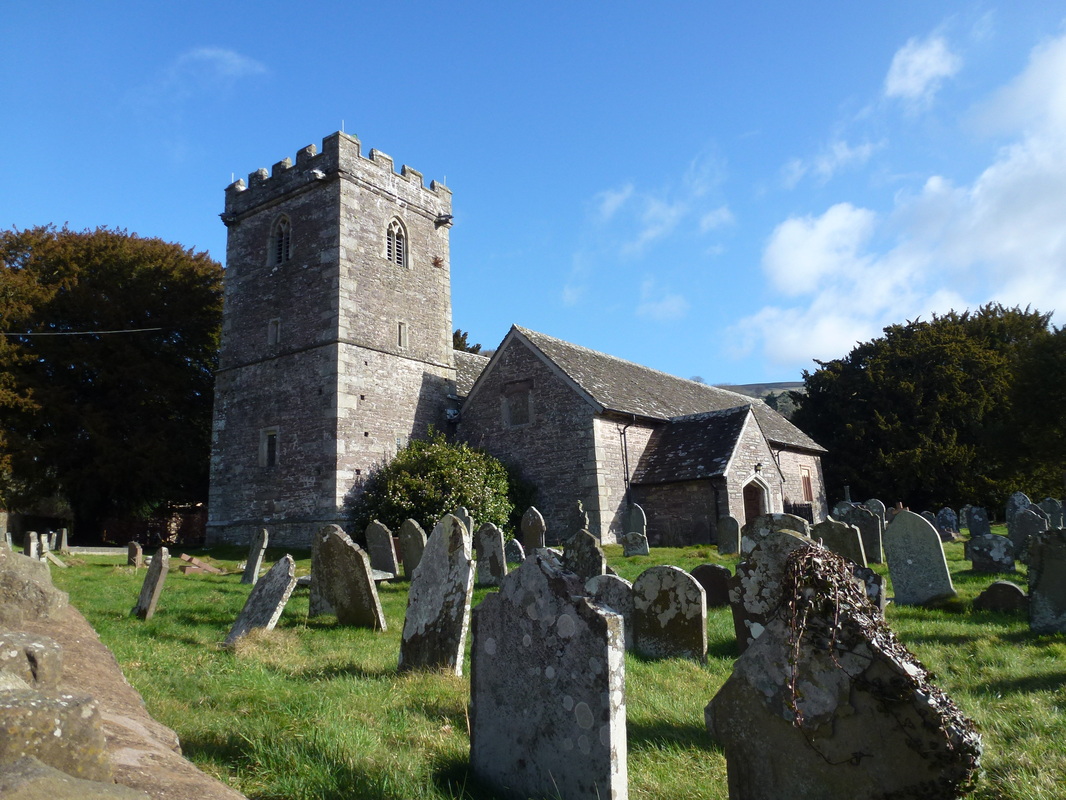 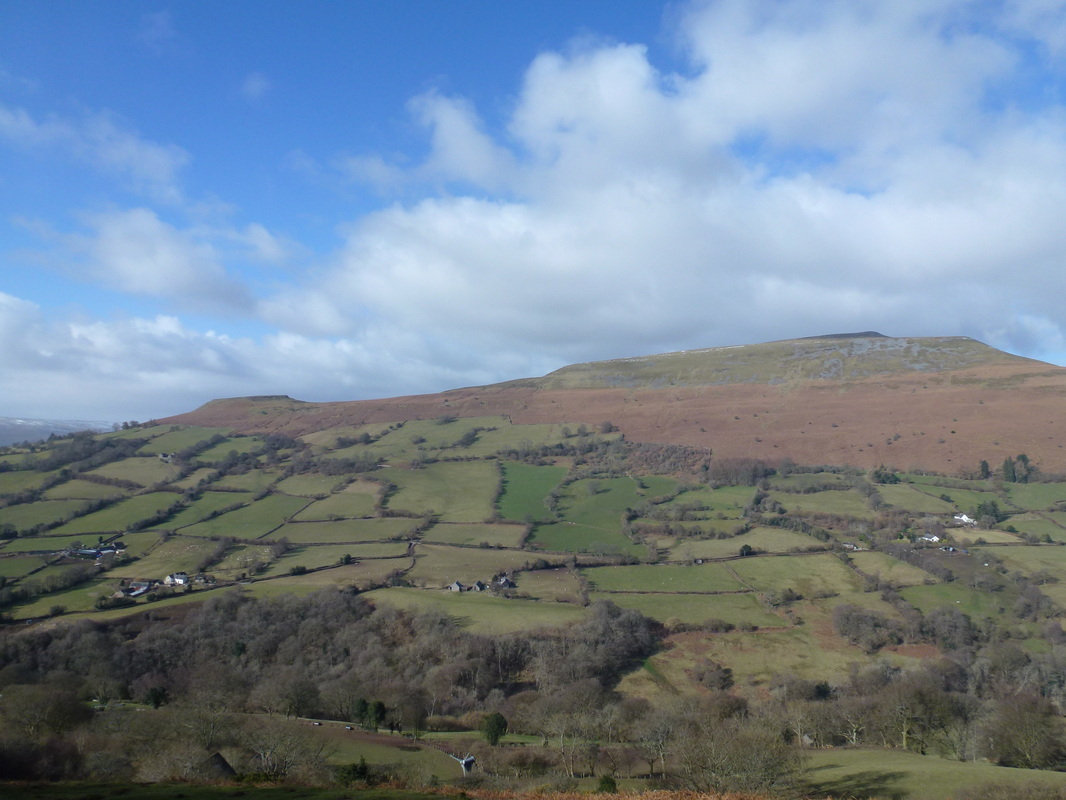 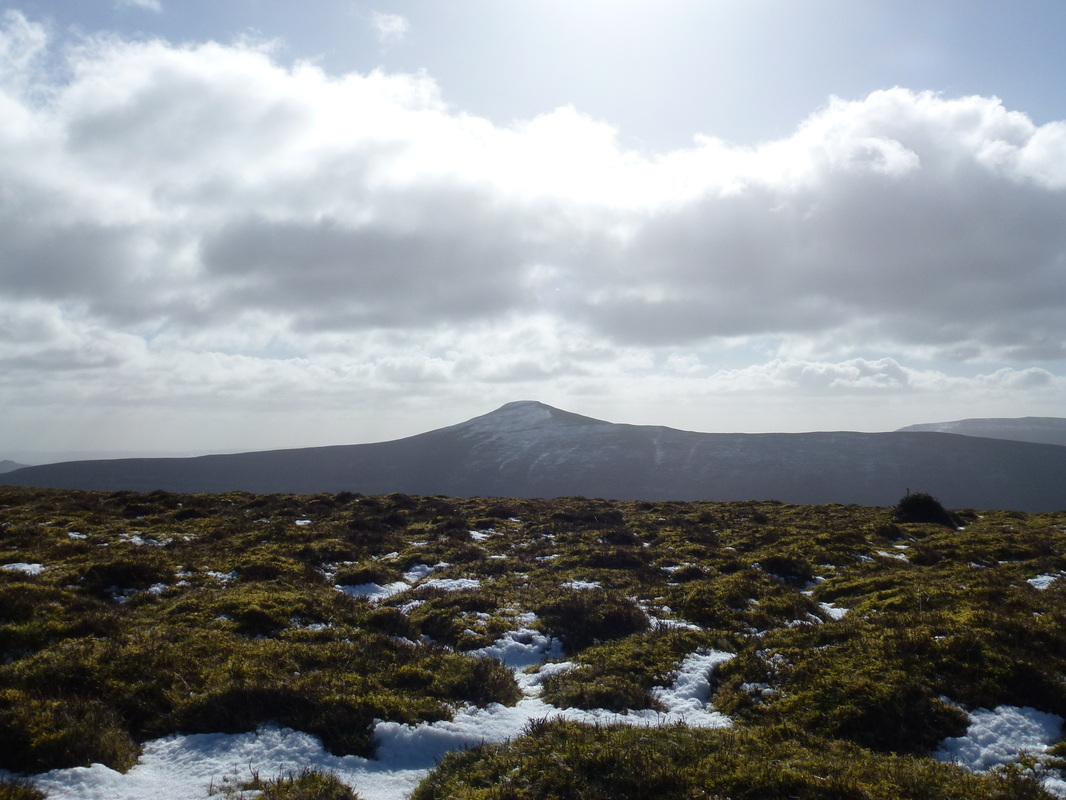 Sugar Loaf from the ascent to Crug Mawr 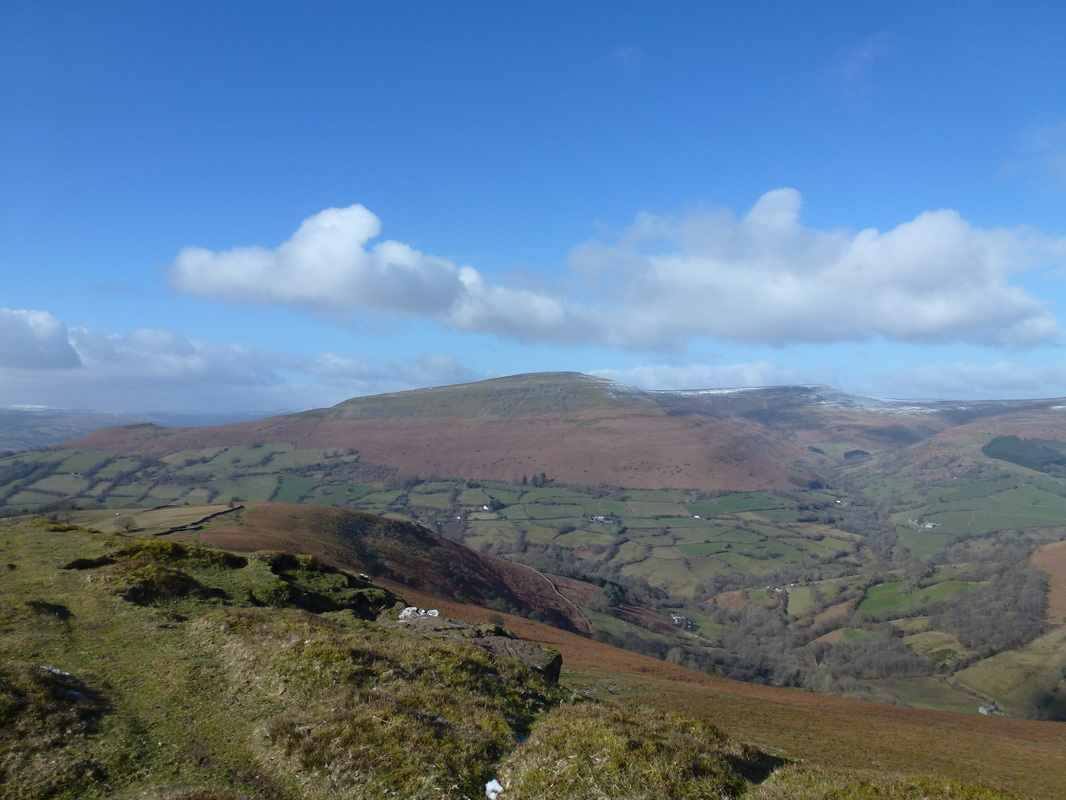 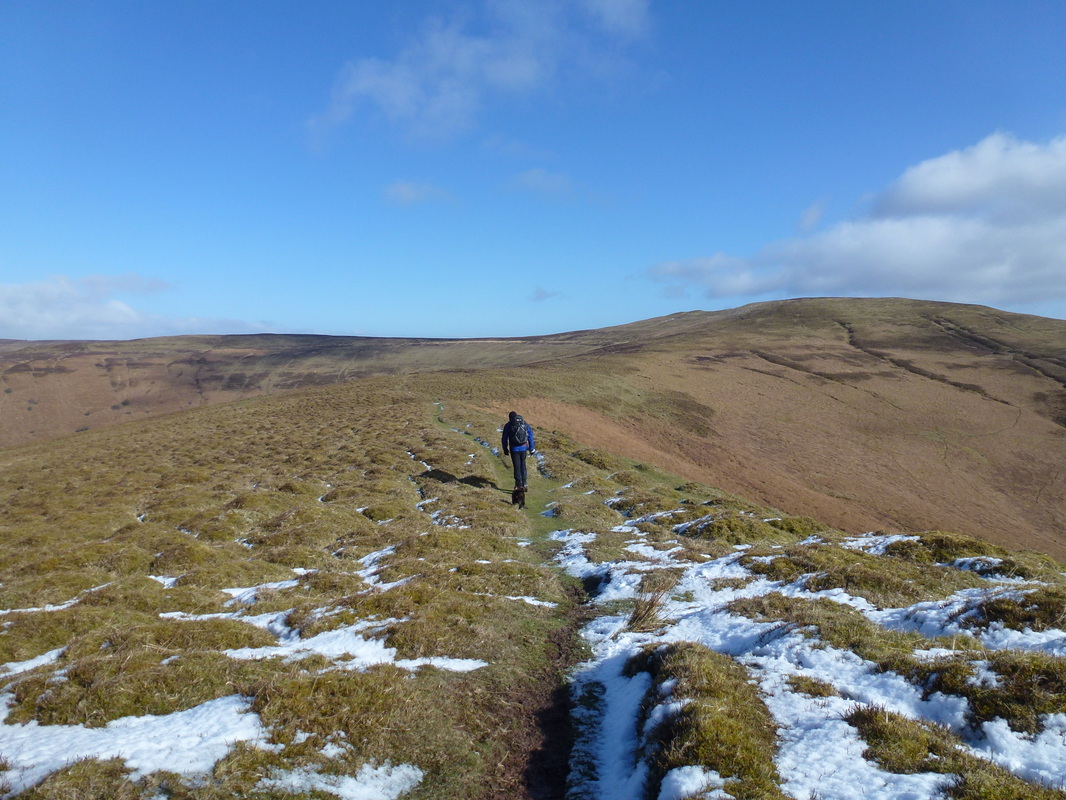 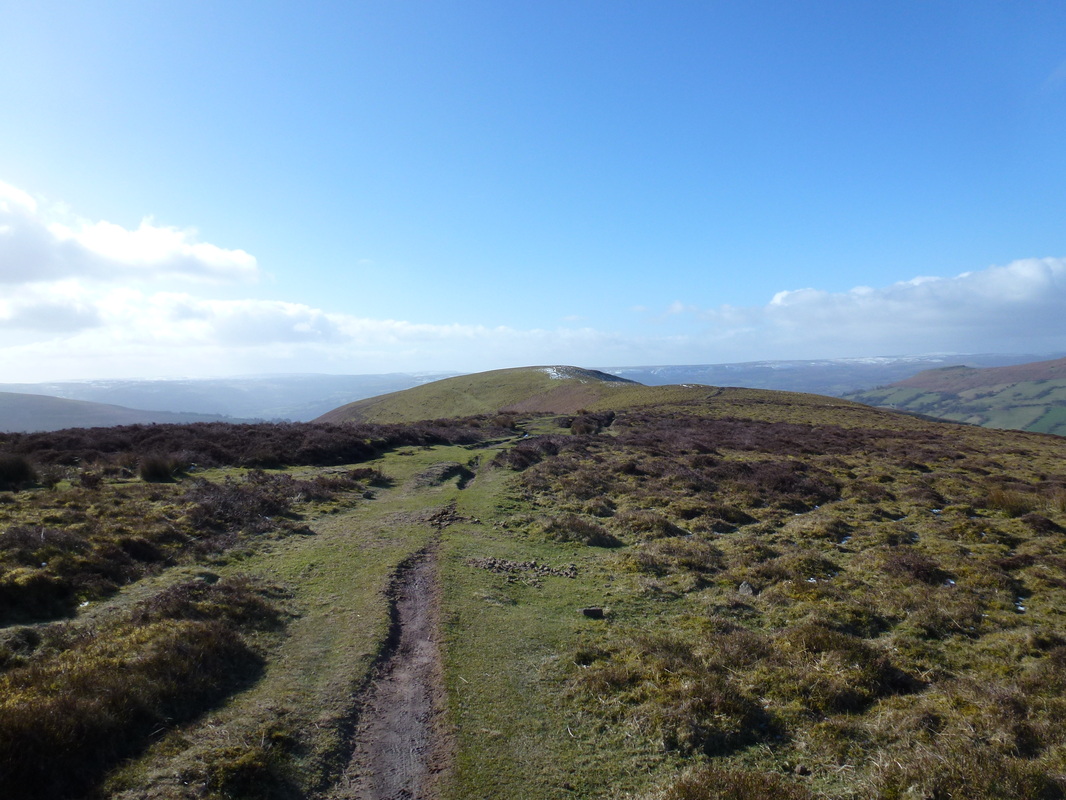 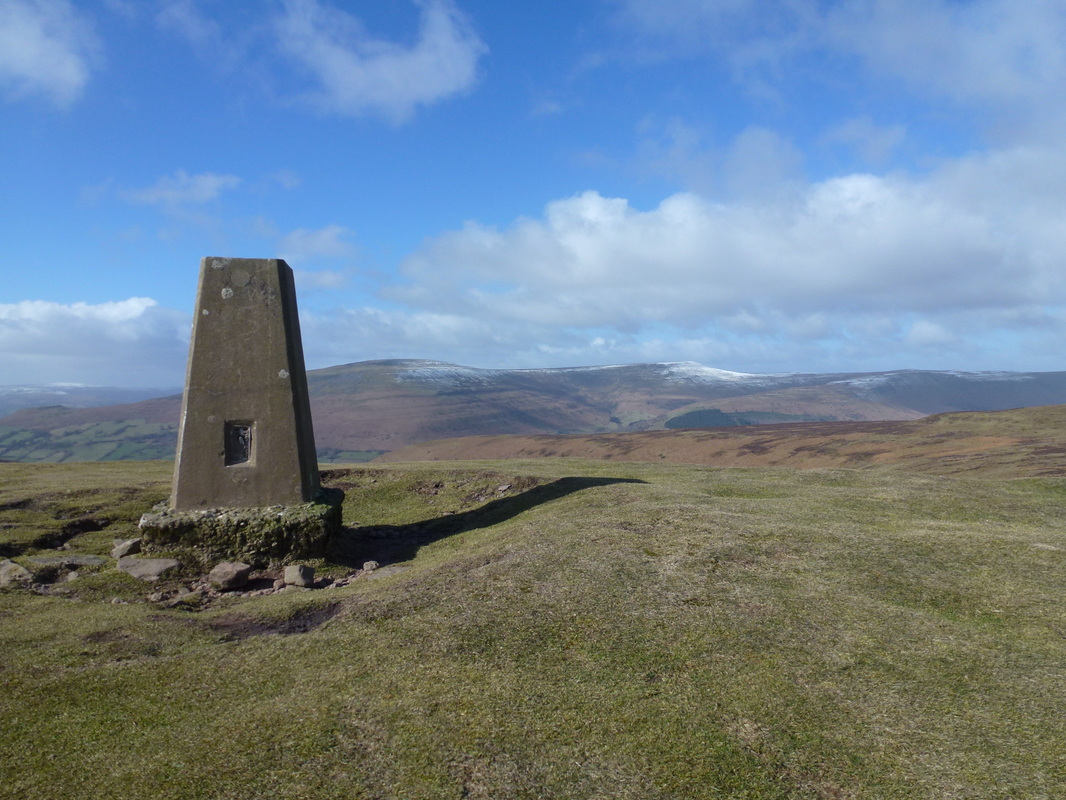 The summit of Crug Mawr 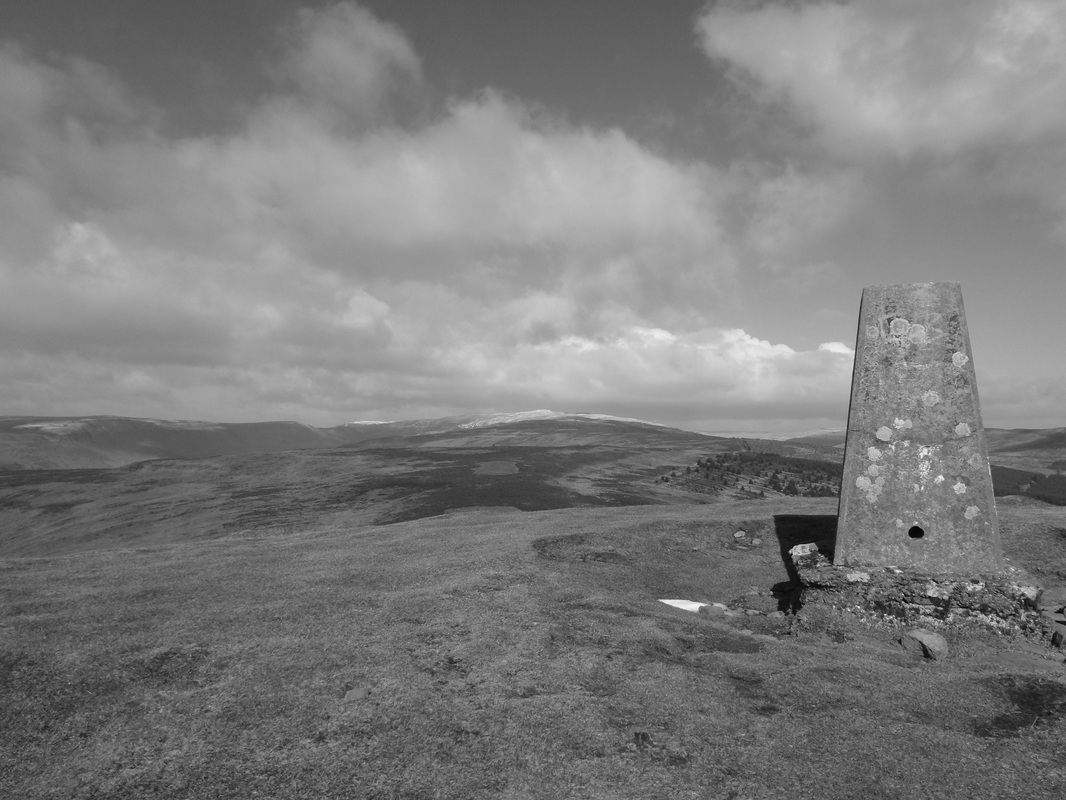 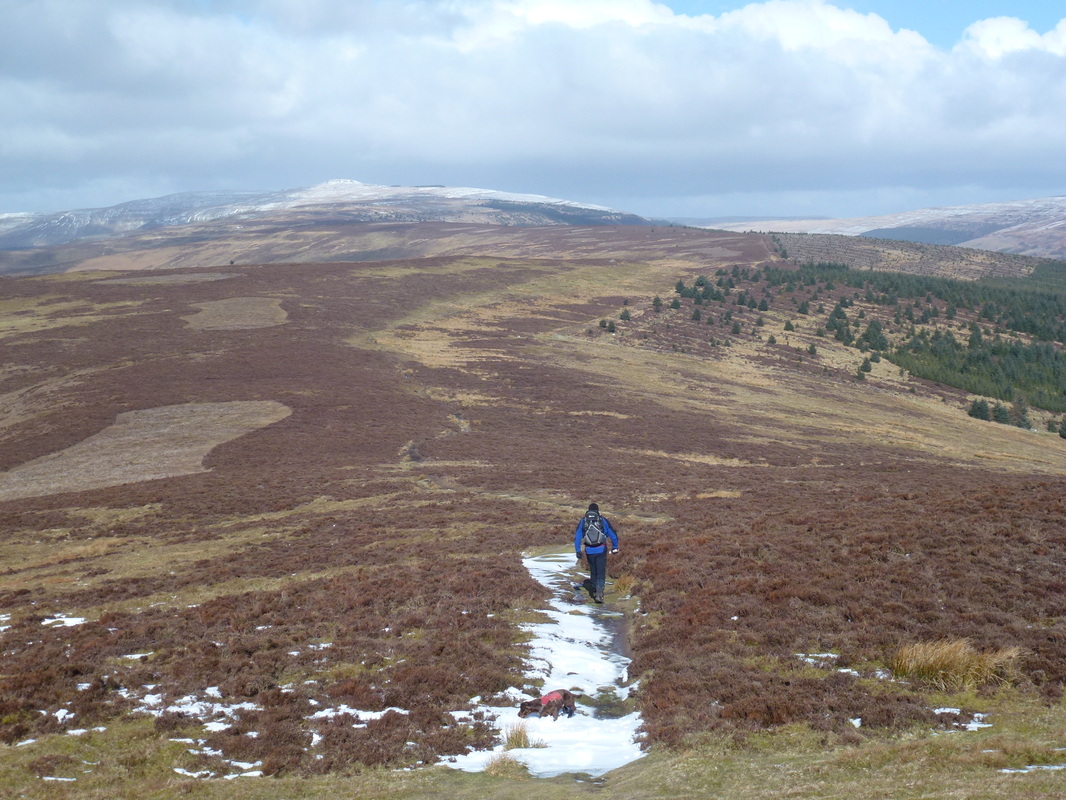 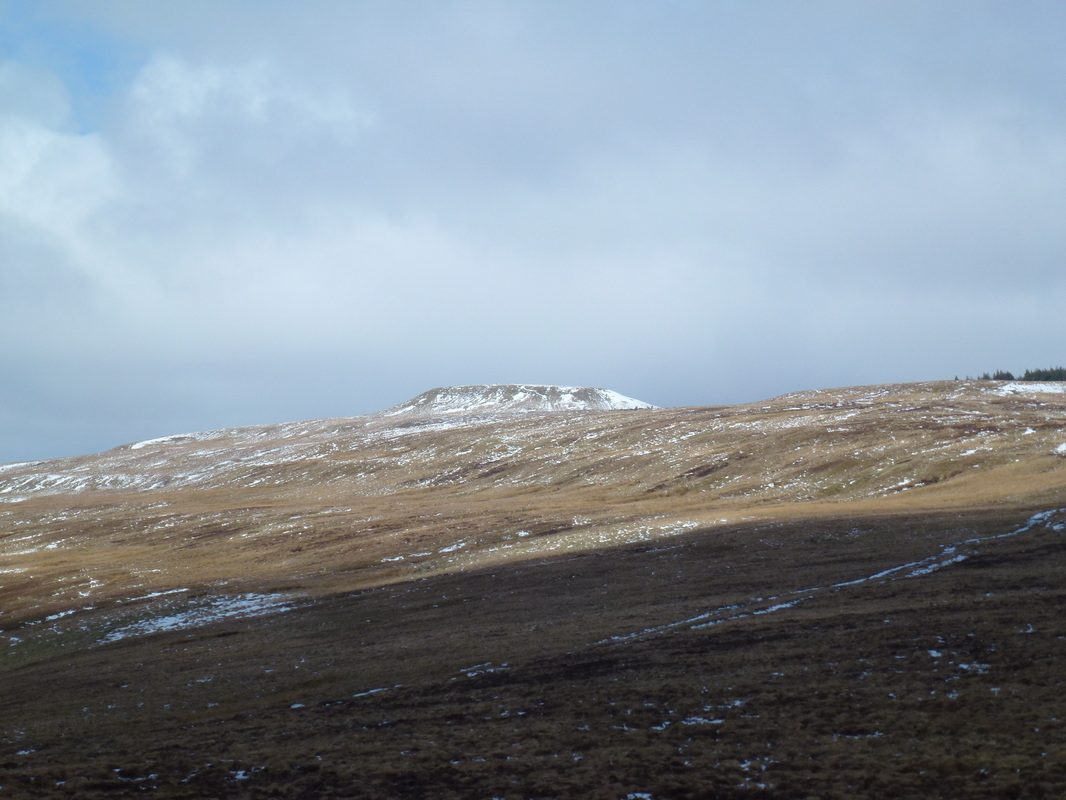 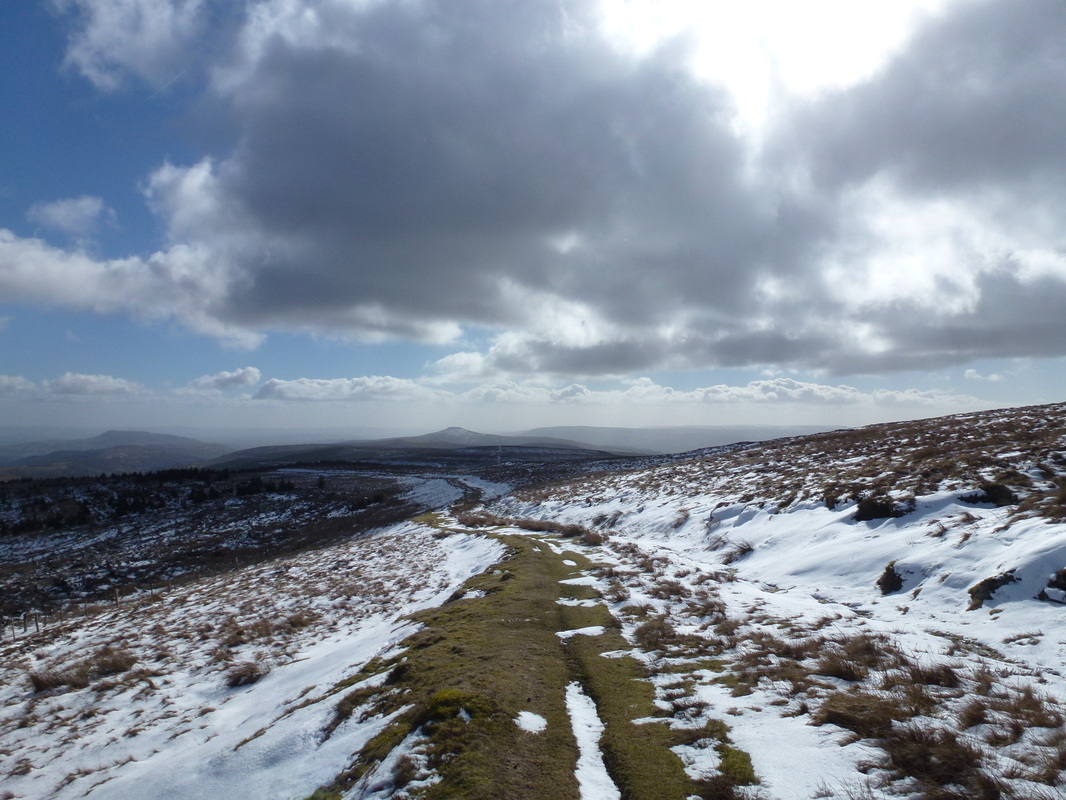 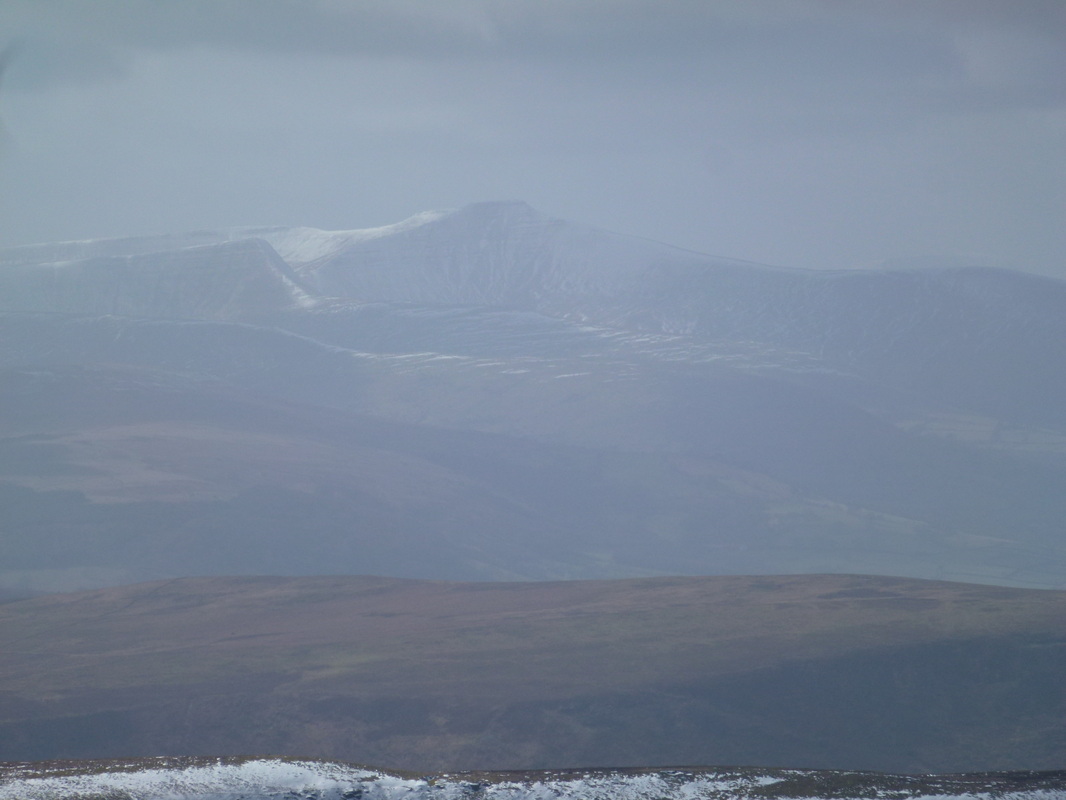 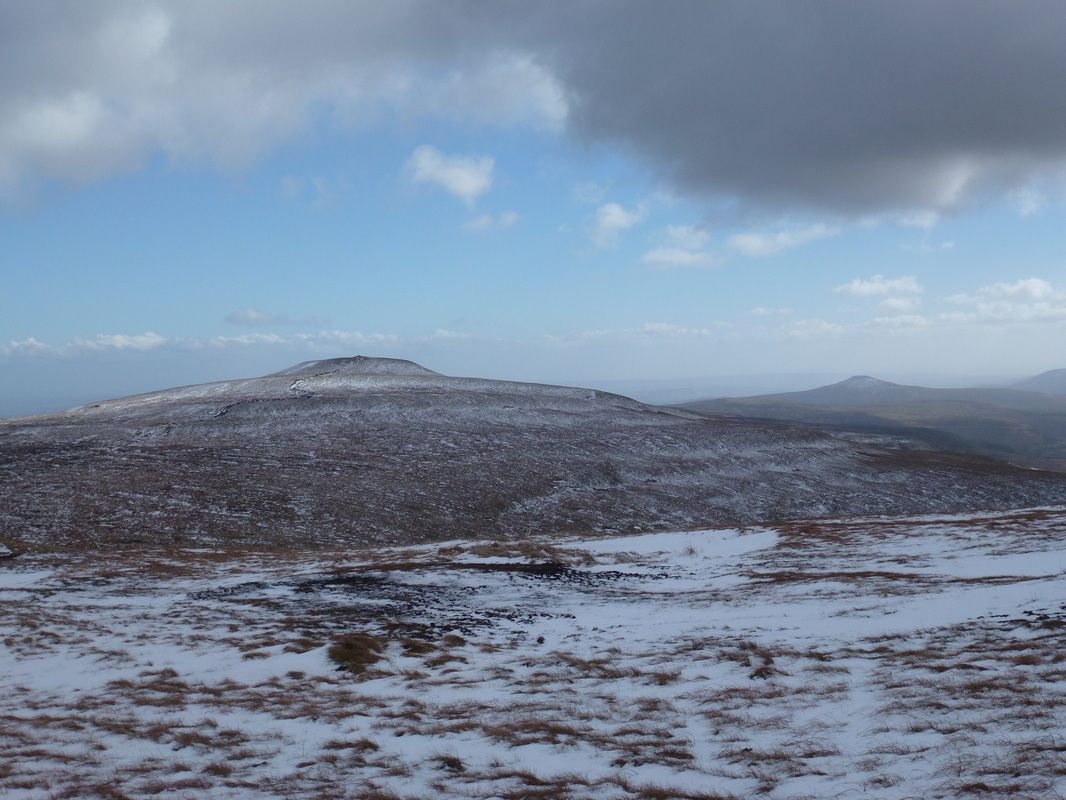 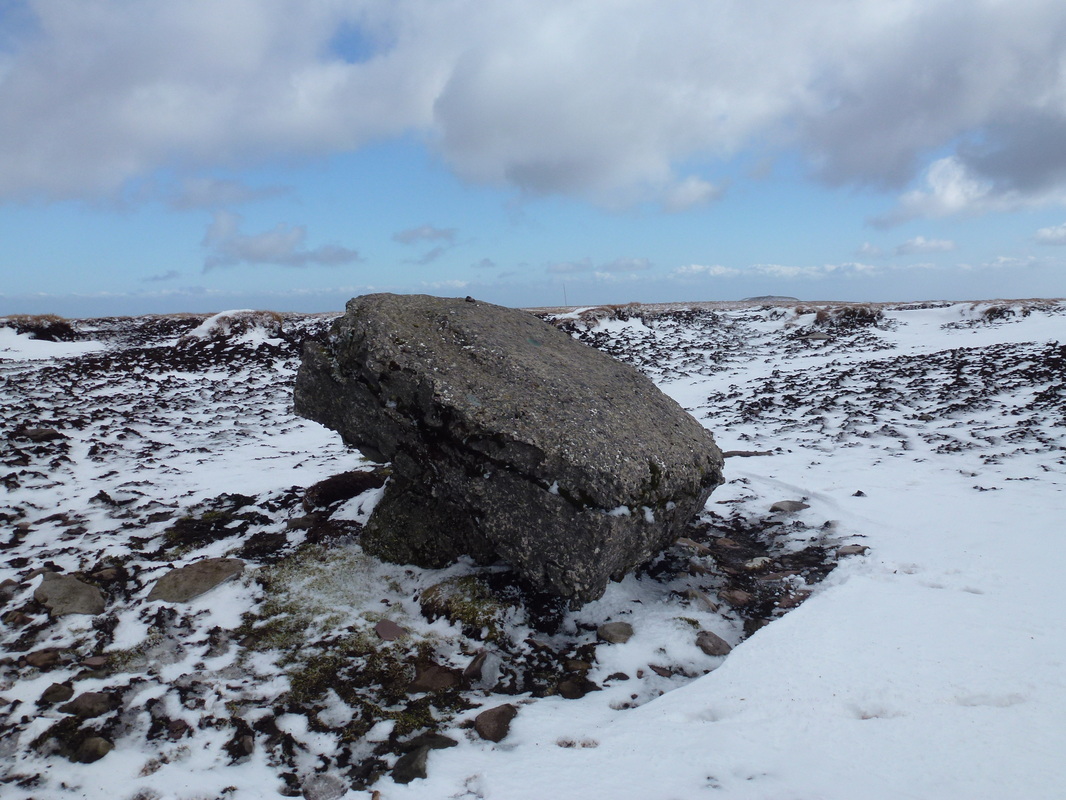 The upturned Trig Point that marks the summit of Waun Fach 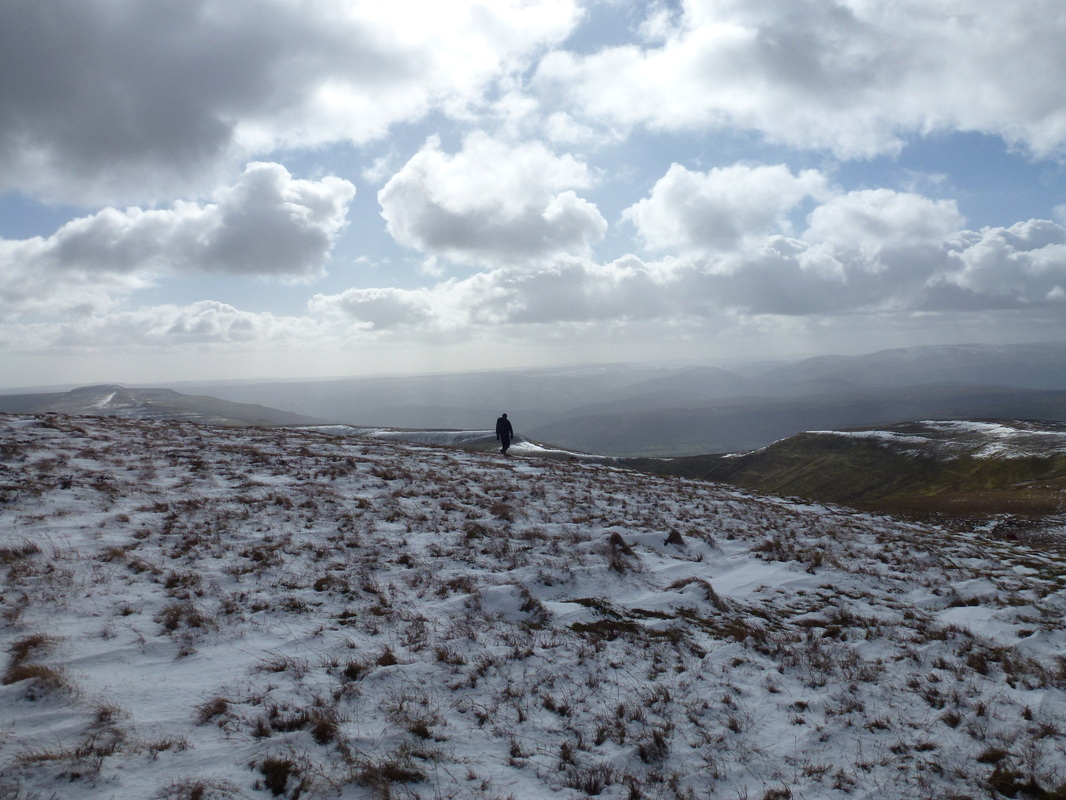 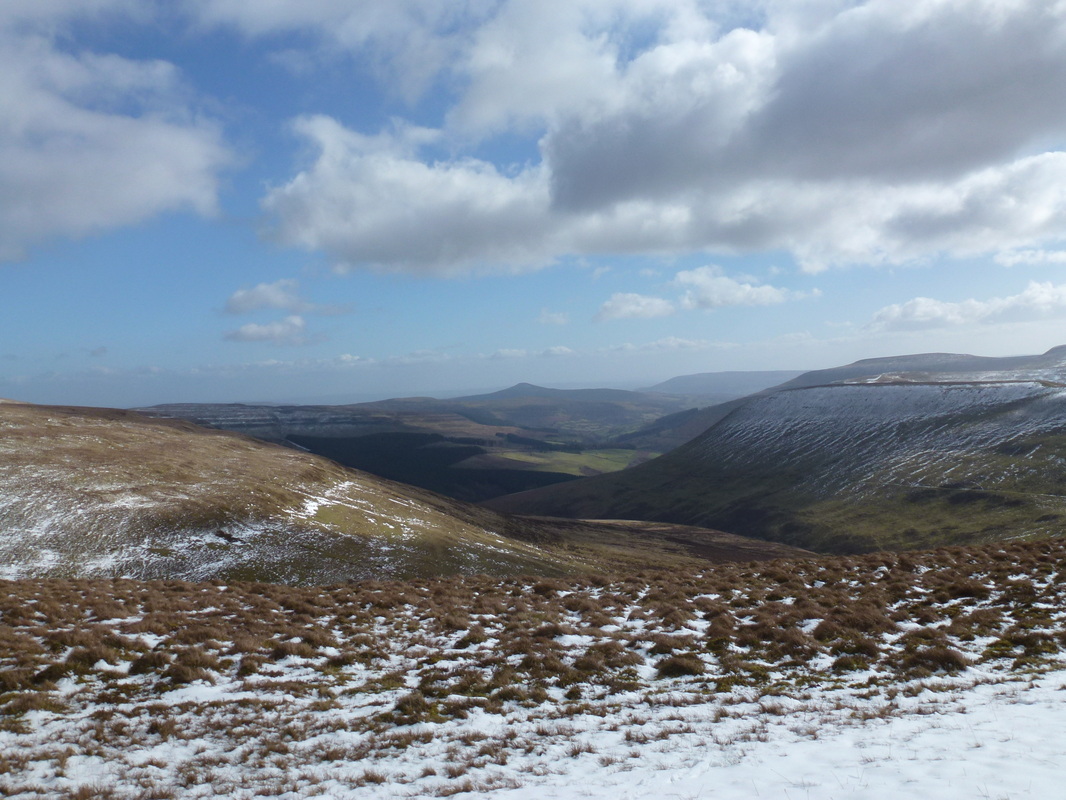 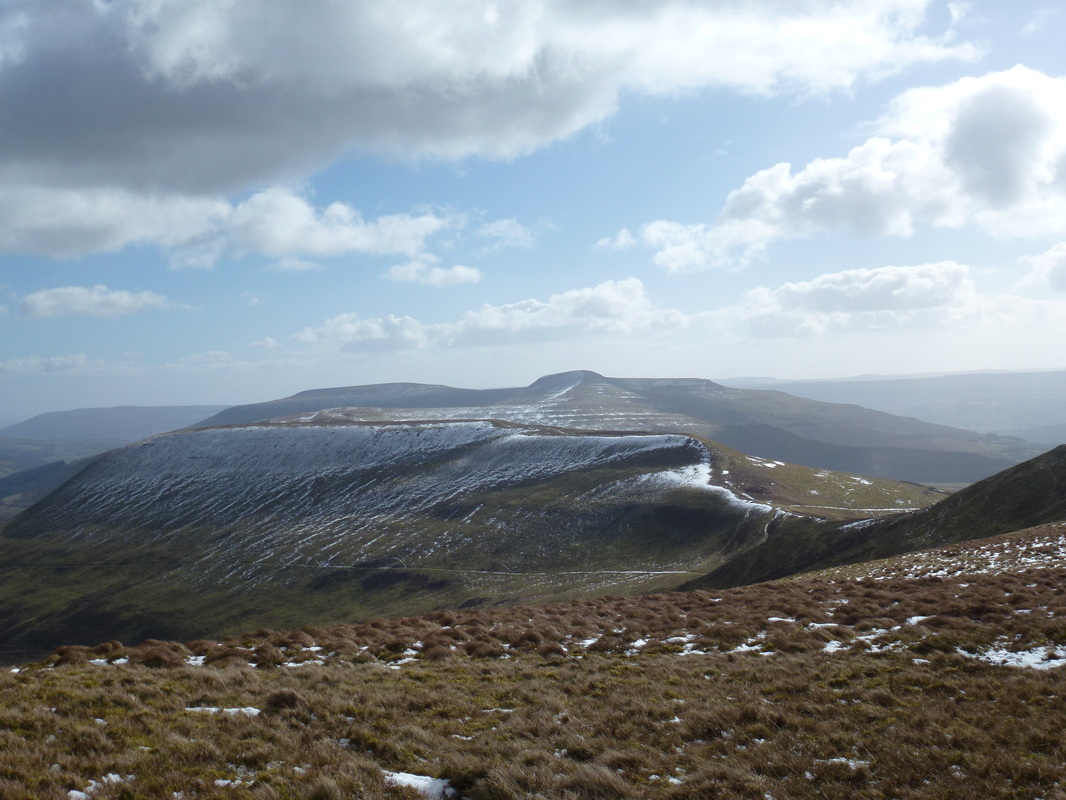 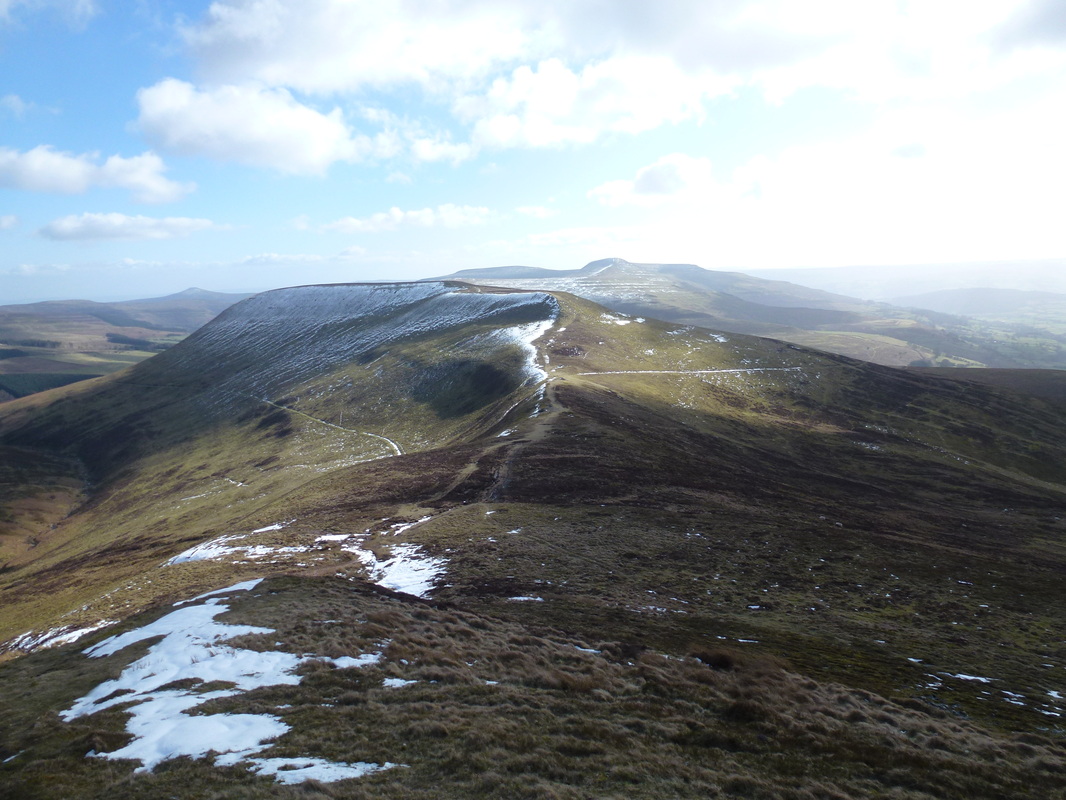 Descending Pen Trumau to the col before the pleasant incline to Mynydd Llysiau.
The good path up Rhiw Trumau from Pengenffordd comes in from the right to the col which is marked by a large cairn 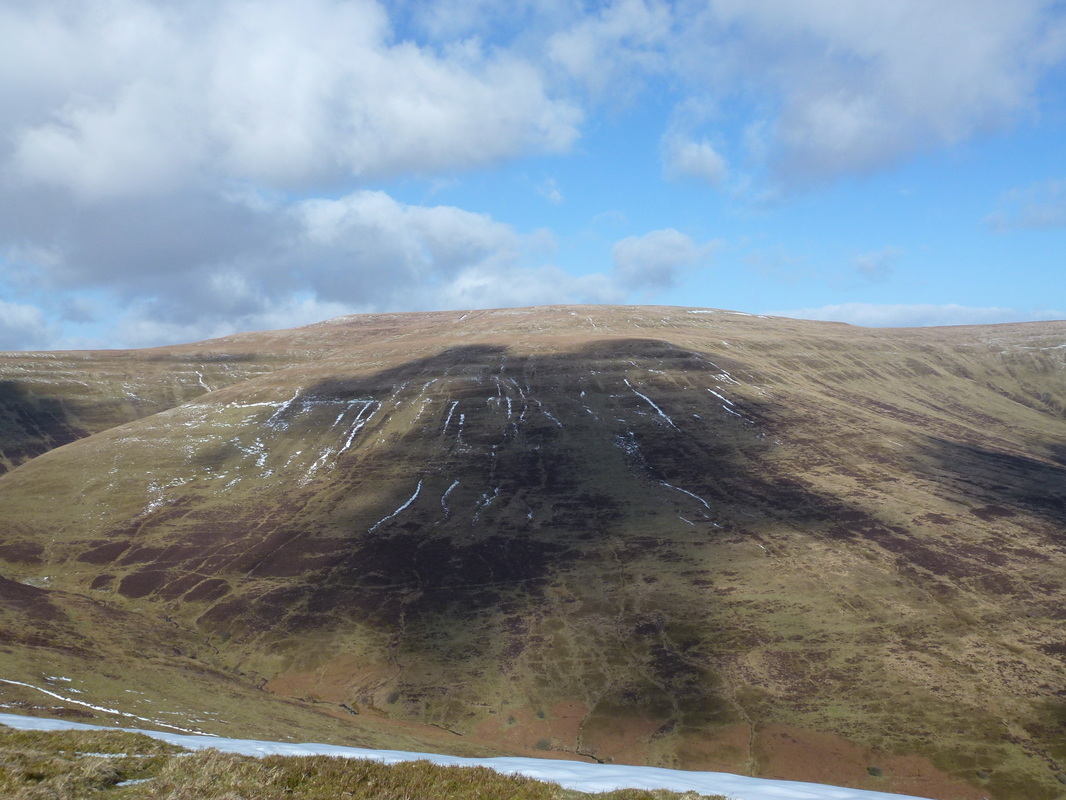 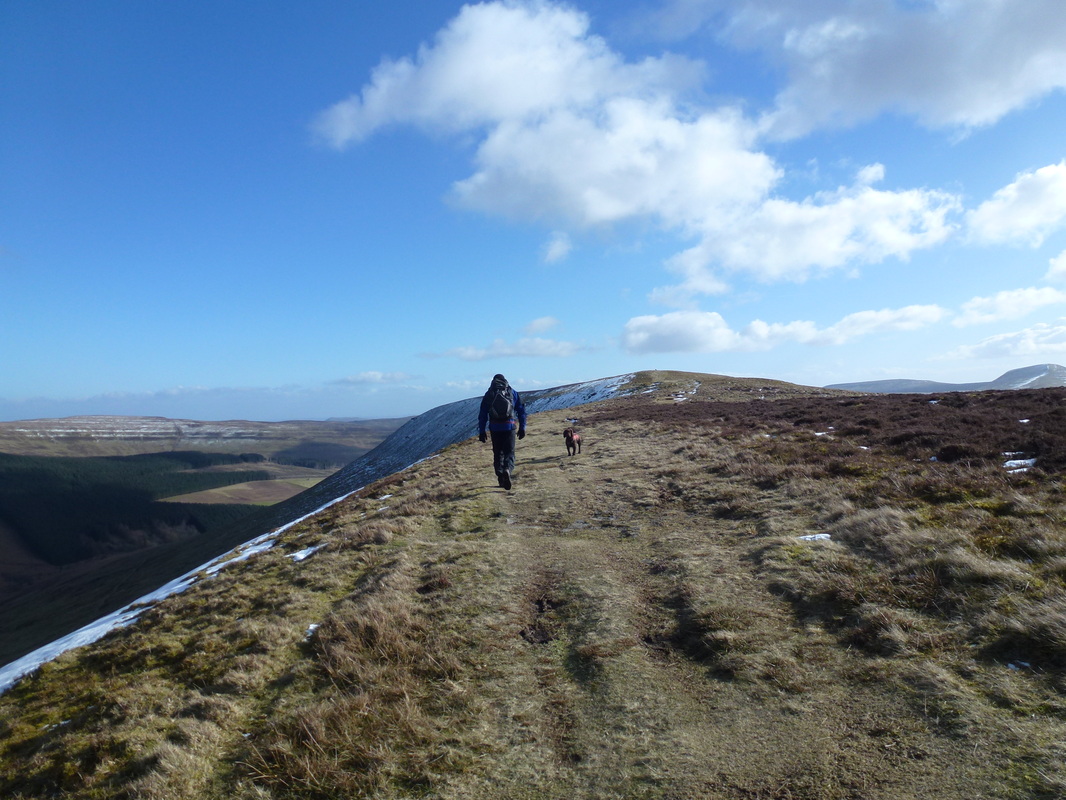 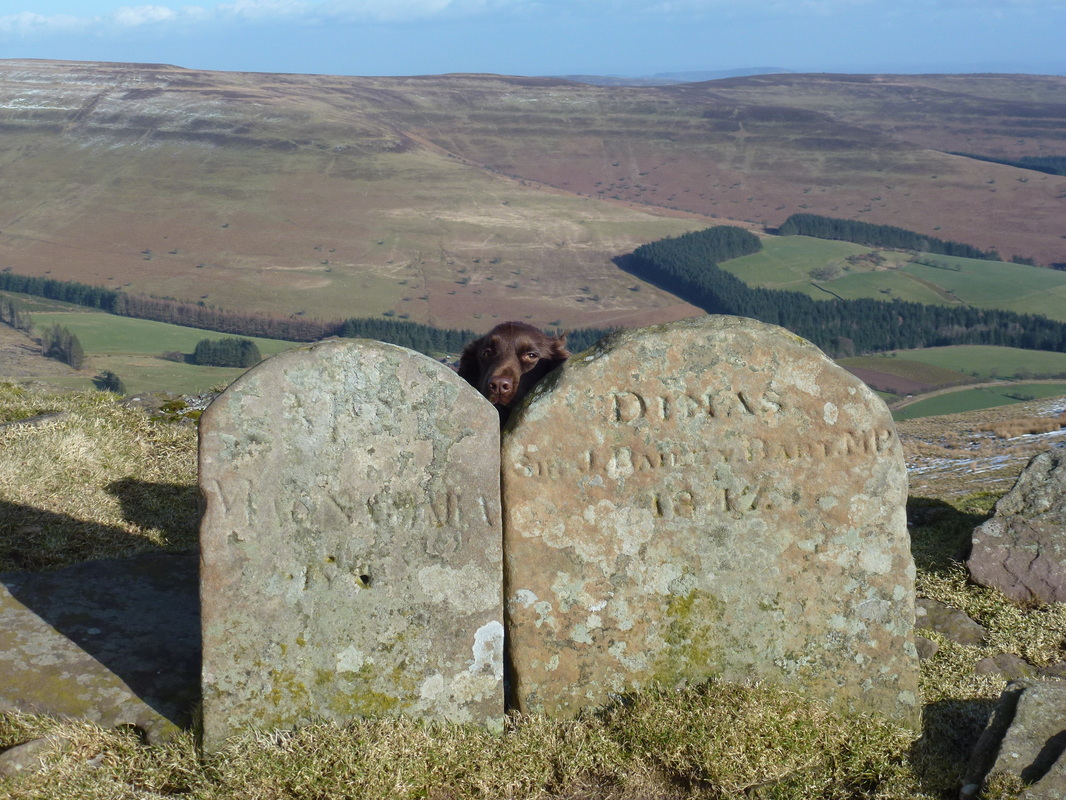 Summit of Pen Twyn Glas - these are boundary stones.  The dog belongs to us and is not a permanent fixture here! 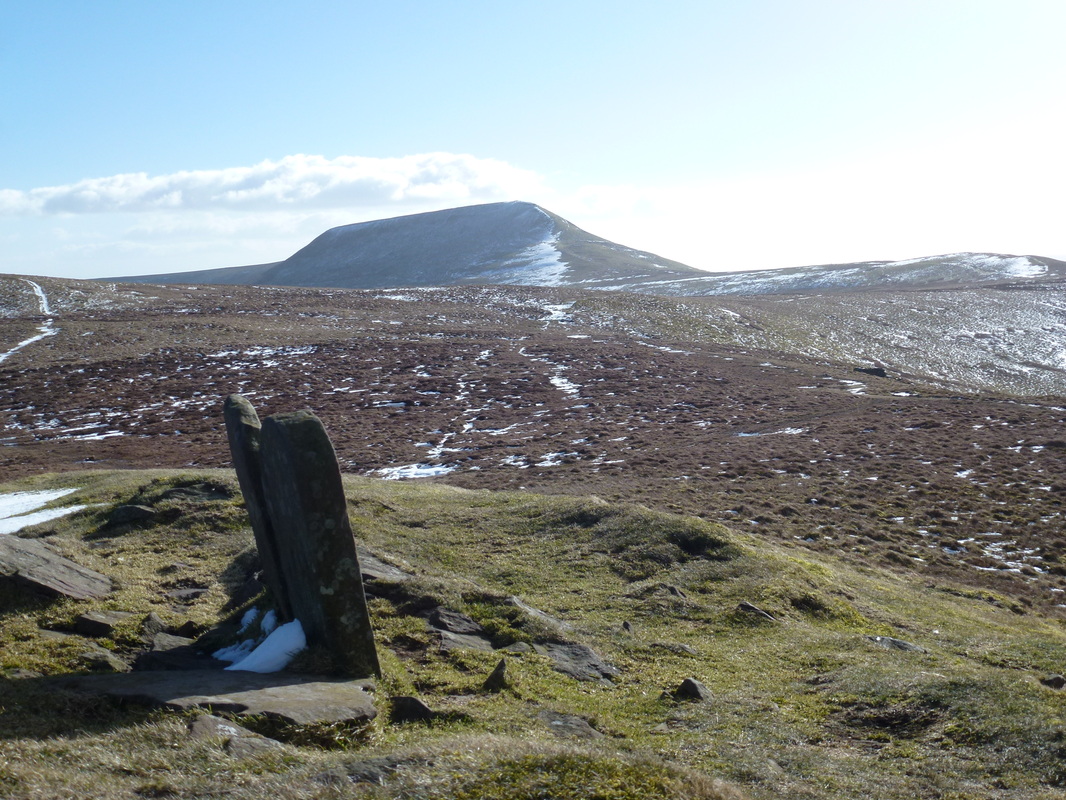 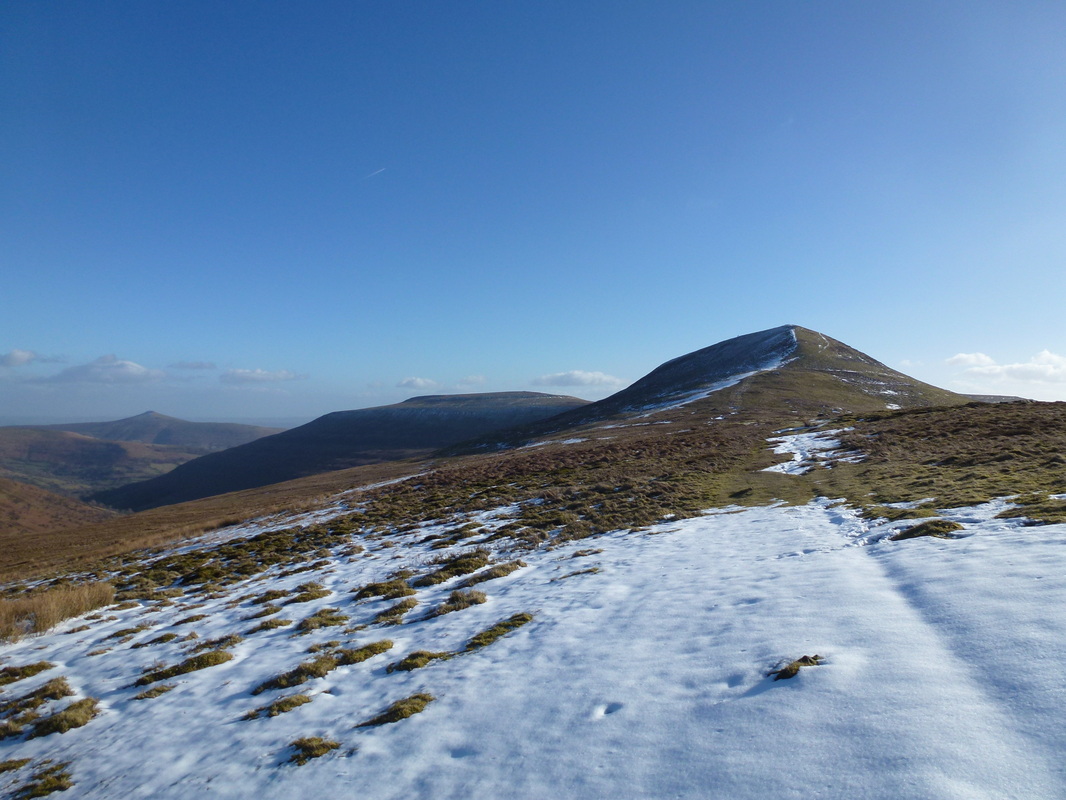 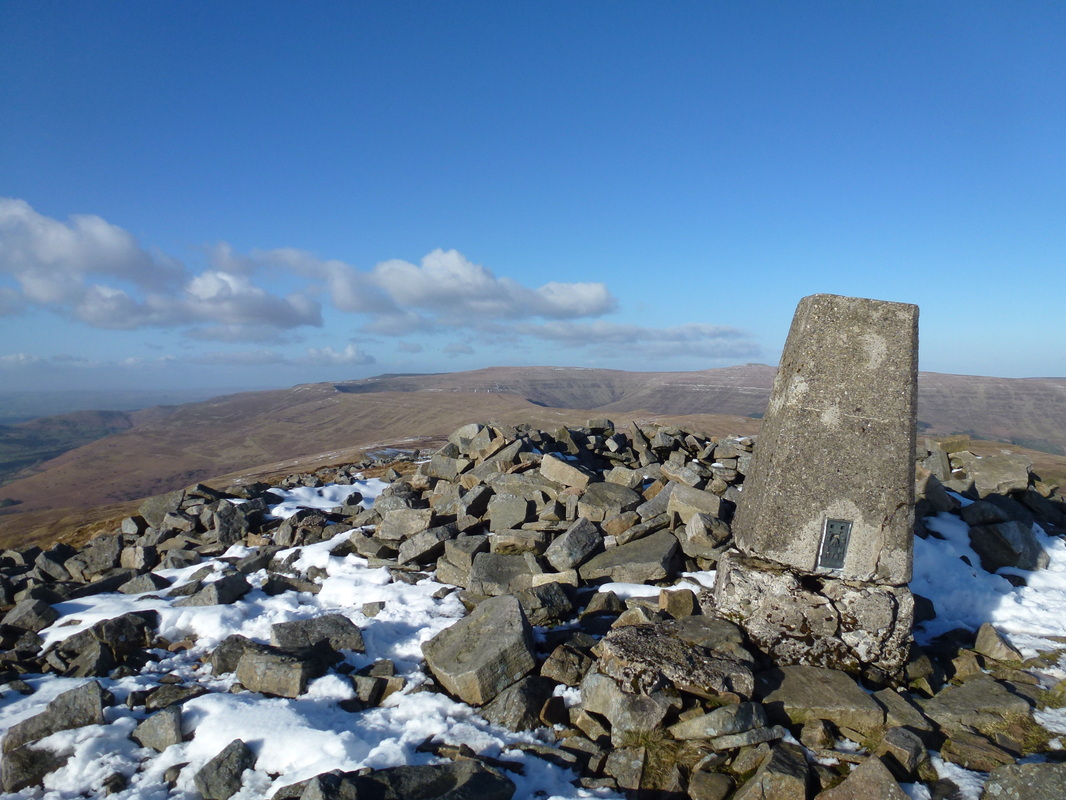 The summit of Pen Allt Mawr looking to Waun Fach 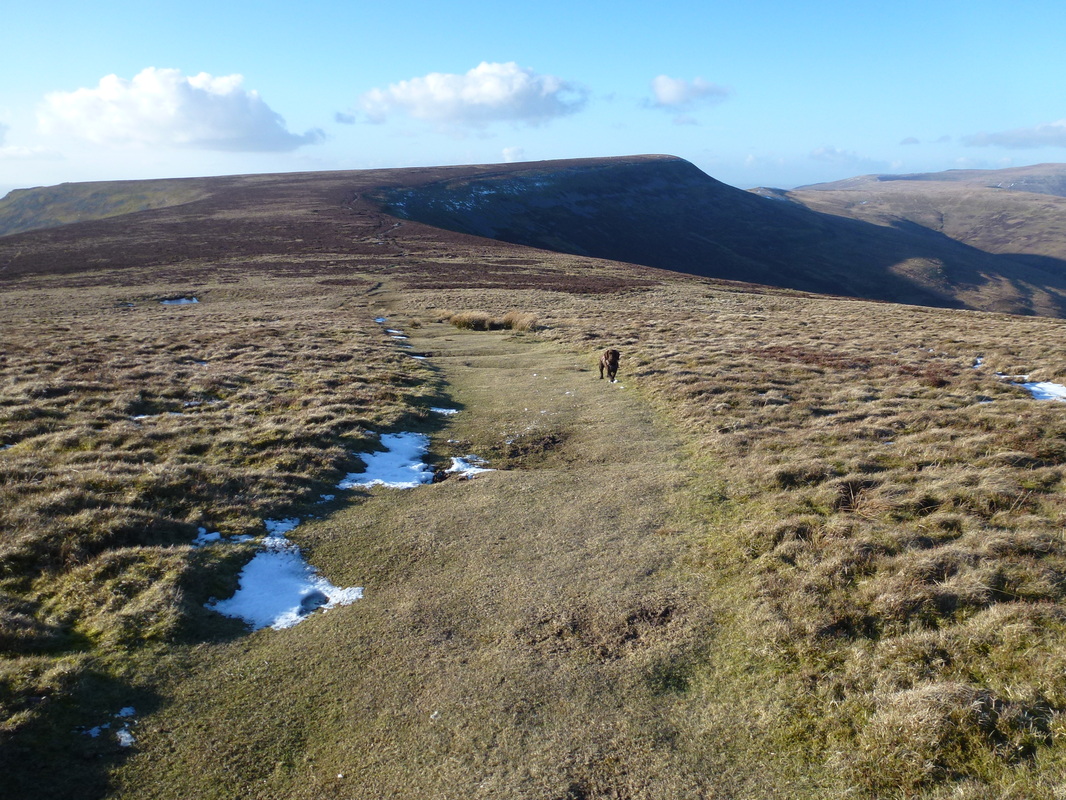 Looking back to Pen Allt Mawr from Pen Cerrig-calch 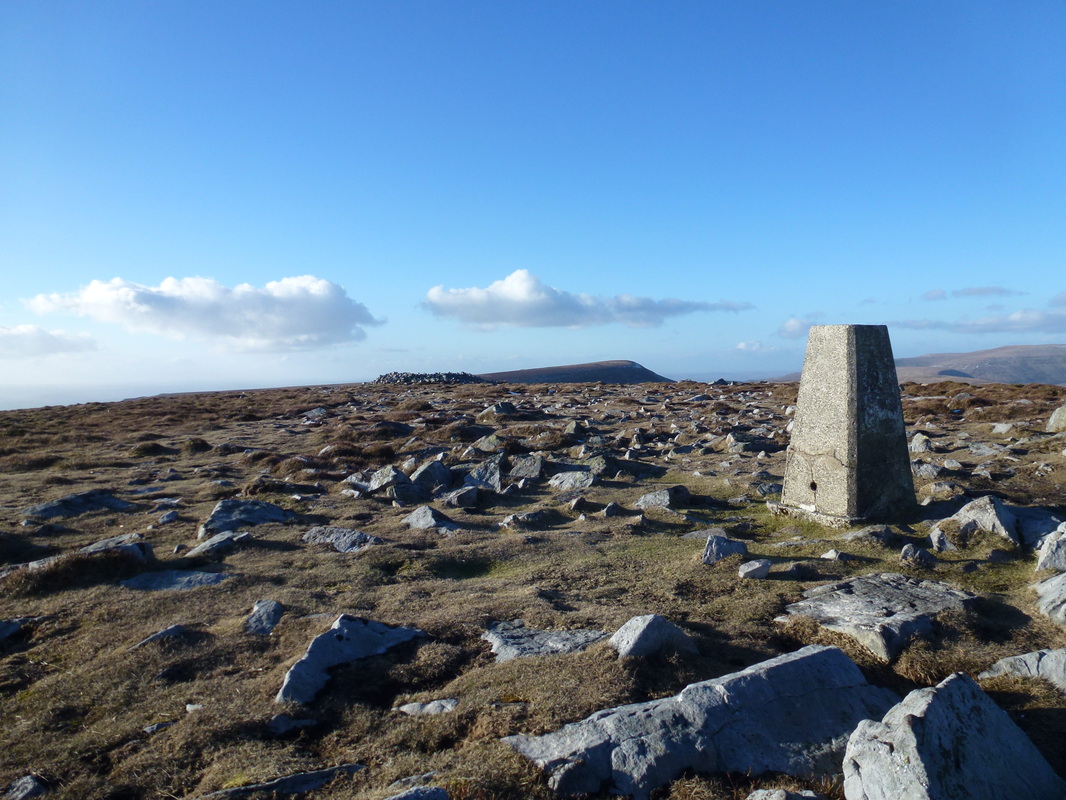 The summit of Pen Cerrig-calch 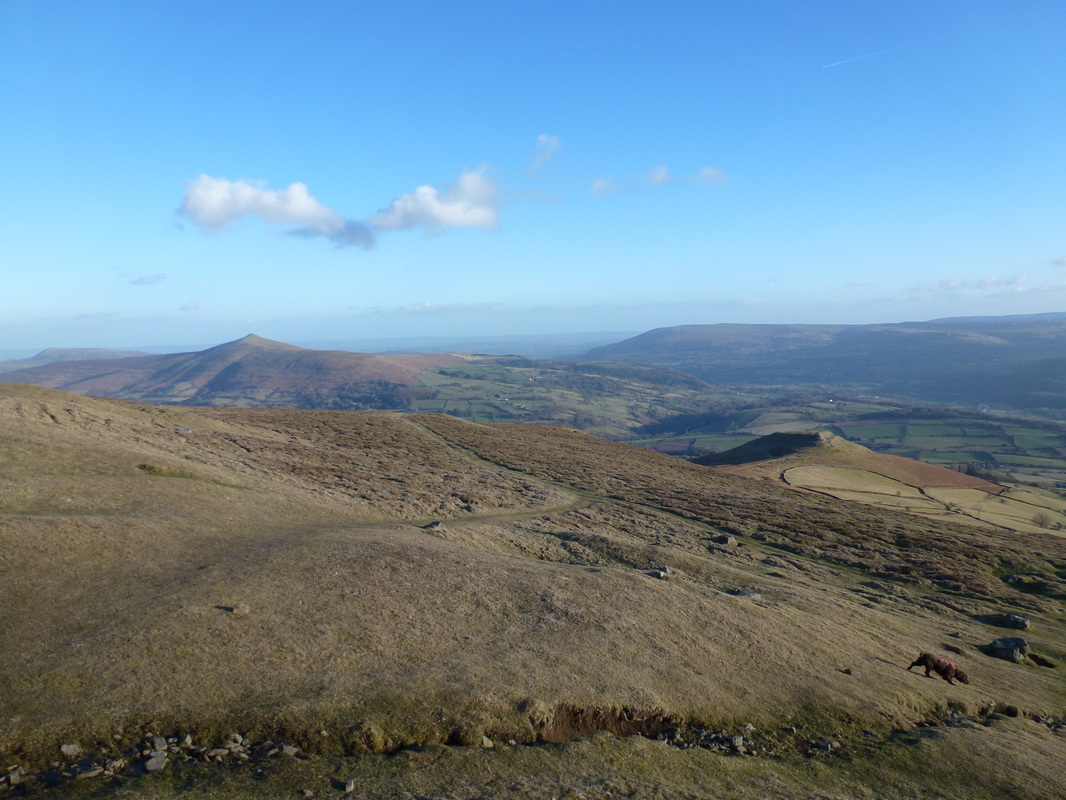