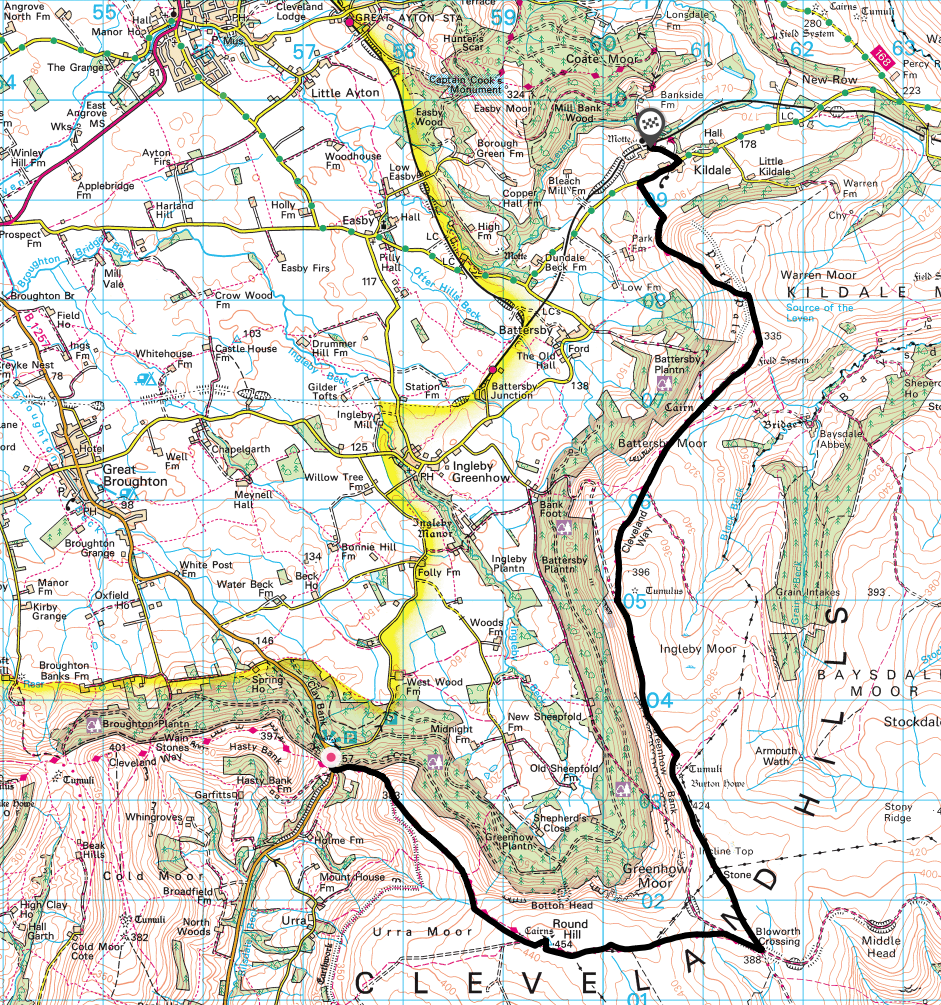 Awoke to a really miserable outlook and it was not to change for the rest of the walk unfortunately - overcast coupled with drizzly fine rain were the order of the day, never mind. Breakfast was as hilarious as Dinner the night before - our fellow guests were walking to Clay Bank Top however we would get a lift there from Mike today as we had walked that section yesterday. Last night and this morning are what long distance trail walking is all about - meeting fellow enthusiasts who share the same passion as you and are lovely people with it. After saying goodbye and wishing our fellow guests good luck we pottered about for a bit whilst the owners Mike & Bev sorted themselves out. We were in no rush today - the leg was just under 10 miles over fairly benign terrain to Kildale.

From the outset at Clay Bank Top we knew this was a day we would not get any views once we climbed up onto Urra Moor - it was a thick grey soup up on the top and it would just be a question of head down and getting to Kildale and after all we had it on good authority that there was a cafe in the village. The route was totally devoid of any other walkers and it was a surprise to see 2 figures appear out of the murk ahead of us near the Bloworth Crossing. After a quick chat we discovered they were a Canadian husband and wife who were doing a few sections of the Cleveland Way. Further along the route we passed a woman on Battersby Moor who was walking solo on sections of the Cleveland Way - we knew this because as we approached Kildale we bumped into her husband who asked us if we had seen her - it turned out he was providing her with logistical support.

From Battersby Moor the path drops gently down into the sleepy village of Kildale and it was here that a farm dog took an intense disliking to Fudge - thankfully his owner was able to call it back but not before it frightened the life out of the 3 of us. In the village we sought out the Cafe come Tea Shop and discovered that it was well & truly shut. All that was left to do was to find somewhere to sit until we could give Bev a call to come and pick us up - it was only 1430 therefore we bimbled down to the Station and had a late lunch. After half an hour or so we gave Bev a call and she duly picked us up and transported us back to Ingleby.

​Despite the ropey weather this leg was still enjoyable and it would be nice to come back and revisit the section from the Bloworth Crossing down to Kildale as to be honest we saw nowt of it today. Back at Ingleby we had a pleasant dinner in company with yet more Coast to Coast walkers - a couple from Kent and an American chap walking solo. Tomorrow would see our stay with Mike & Bev come to a close as we were off to Saltburn - once again with heavy packs unfortunately.​ 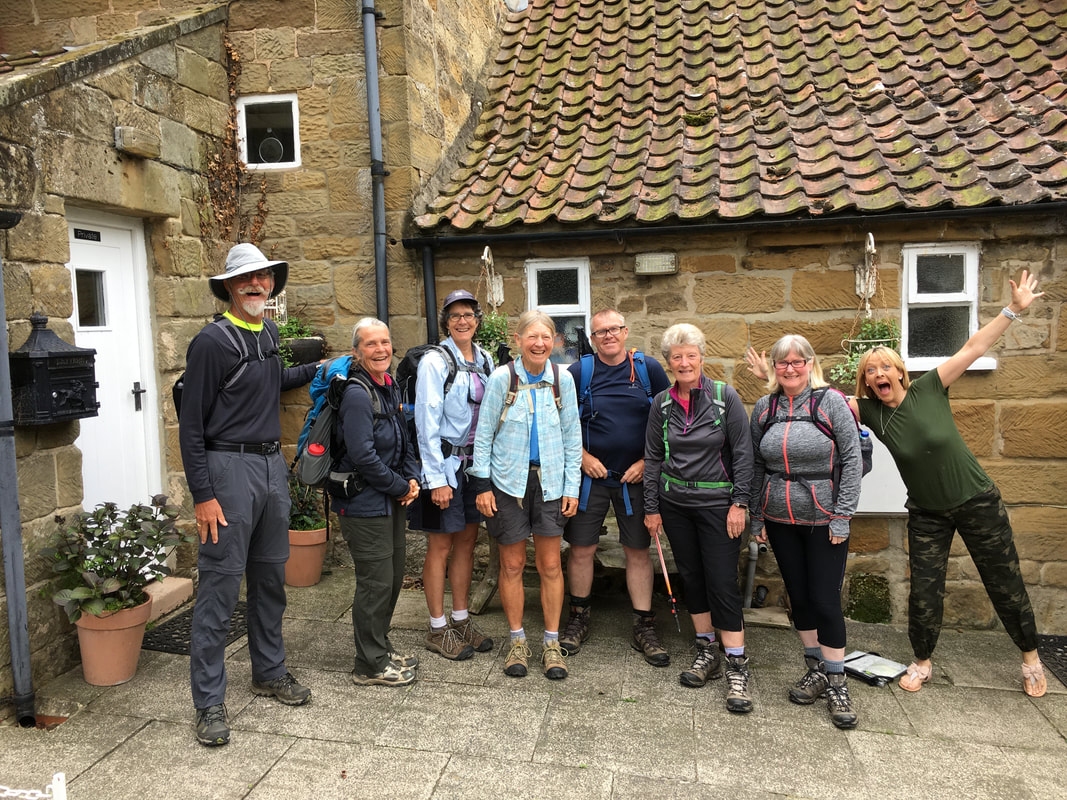 Our fellow guests (& Bev) at Park House.
Contrary to popular belief, Colonel Custer was not staying with us last night although this chap was an American. 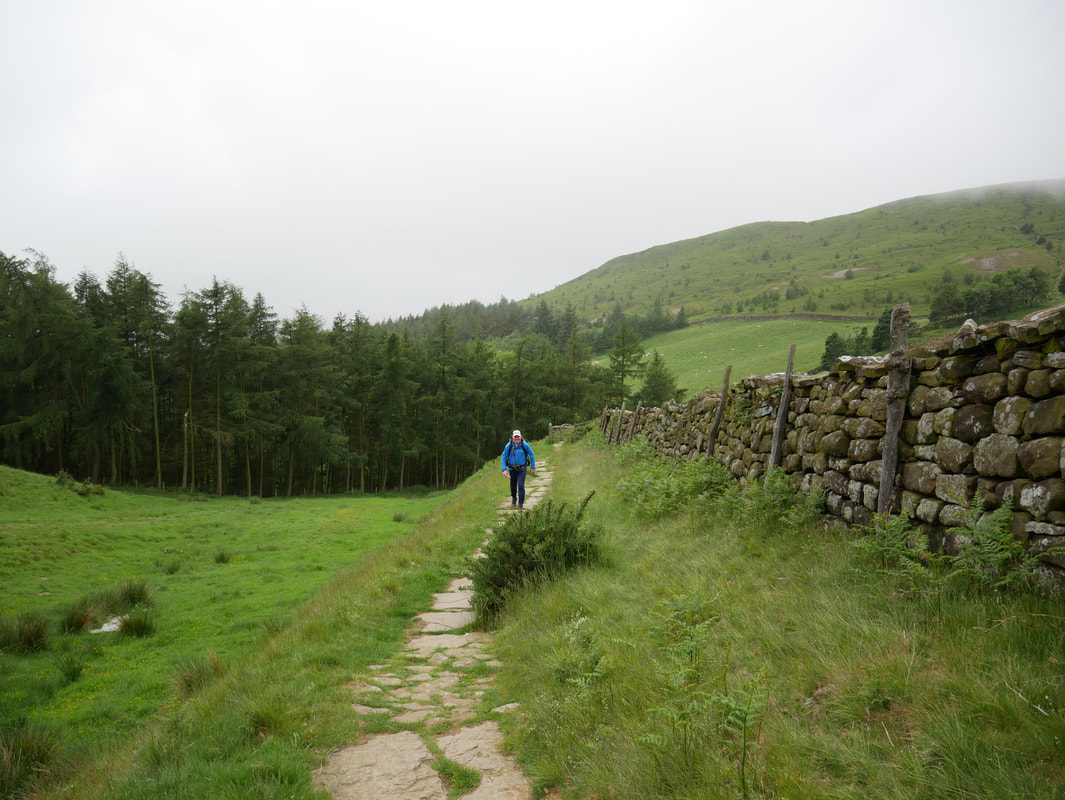 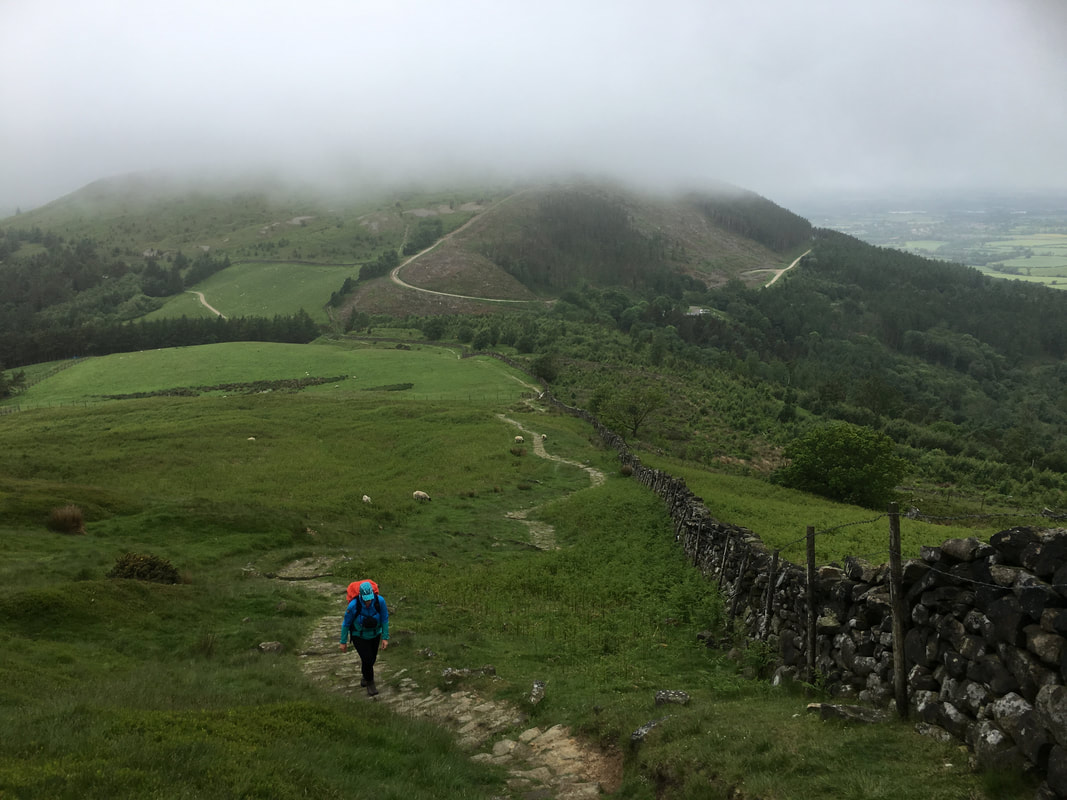 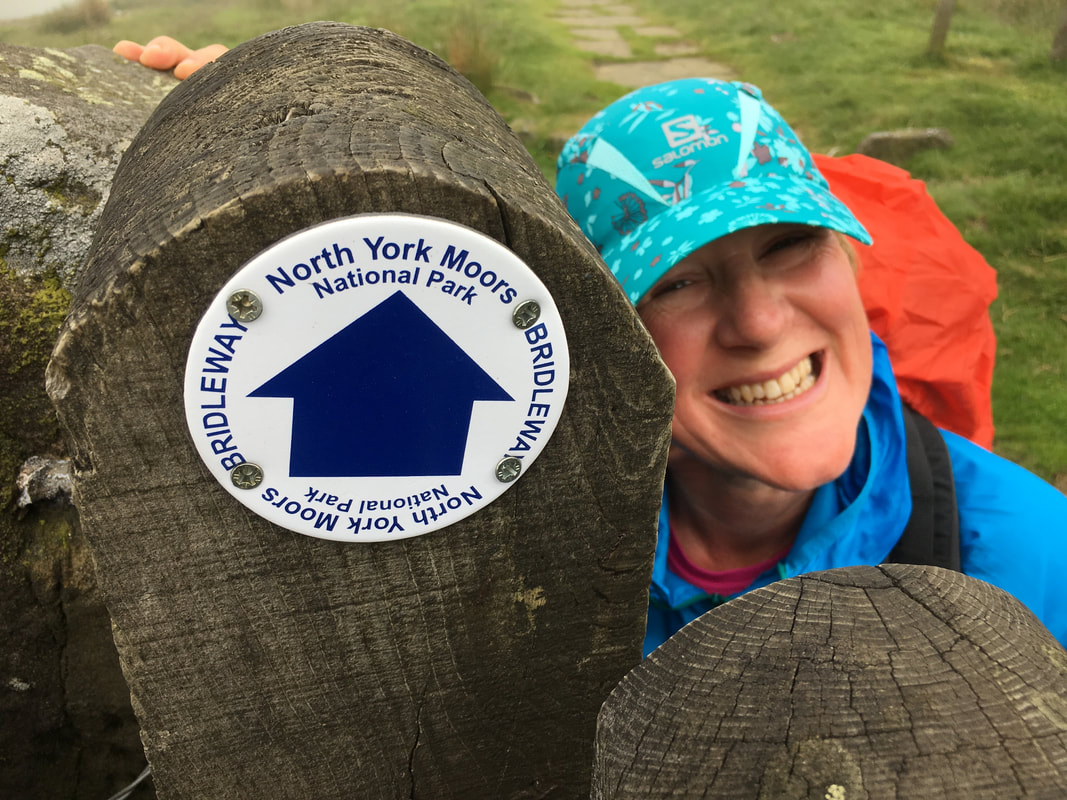 Despite the crap weather, Mrs W was still in a good mood, as was I. 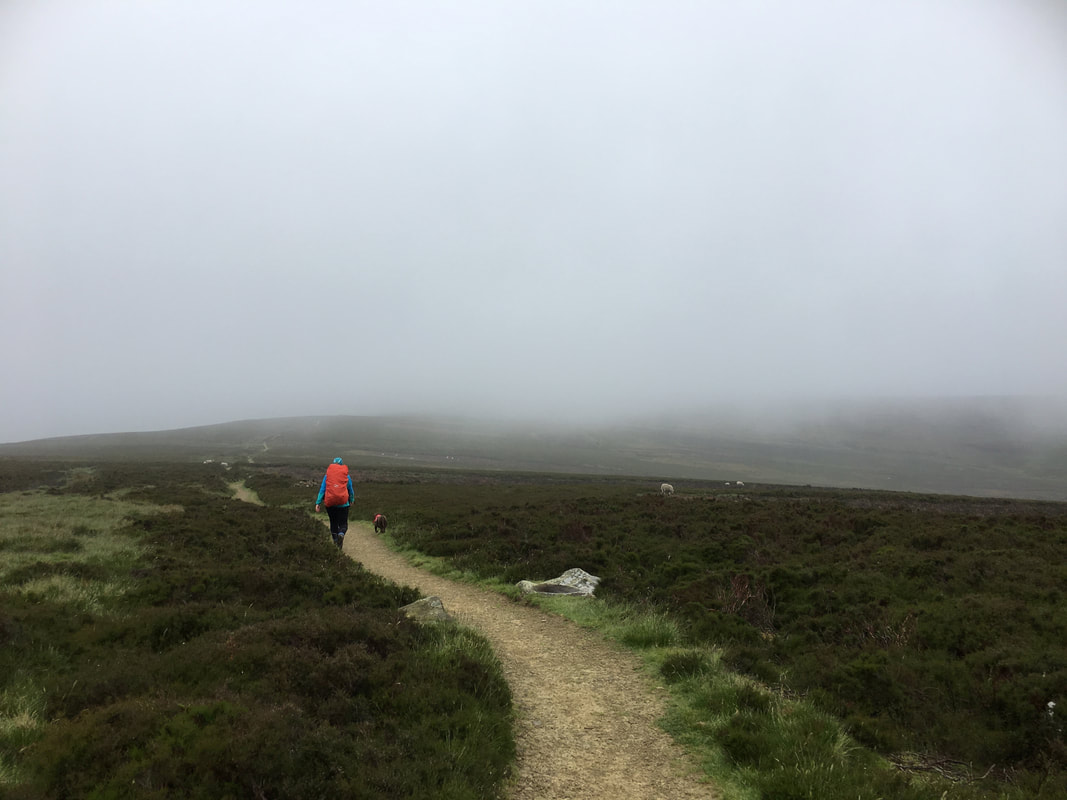 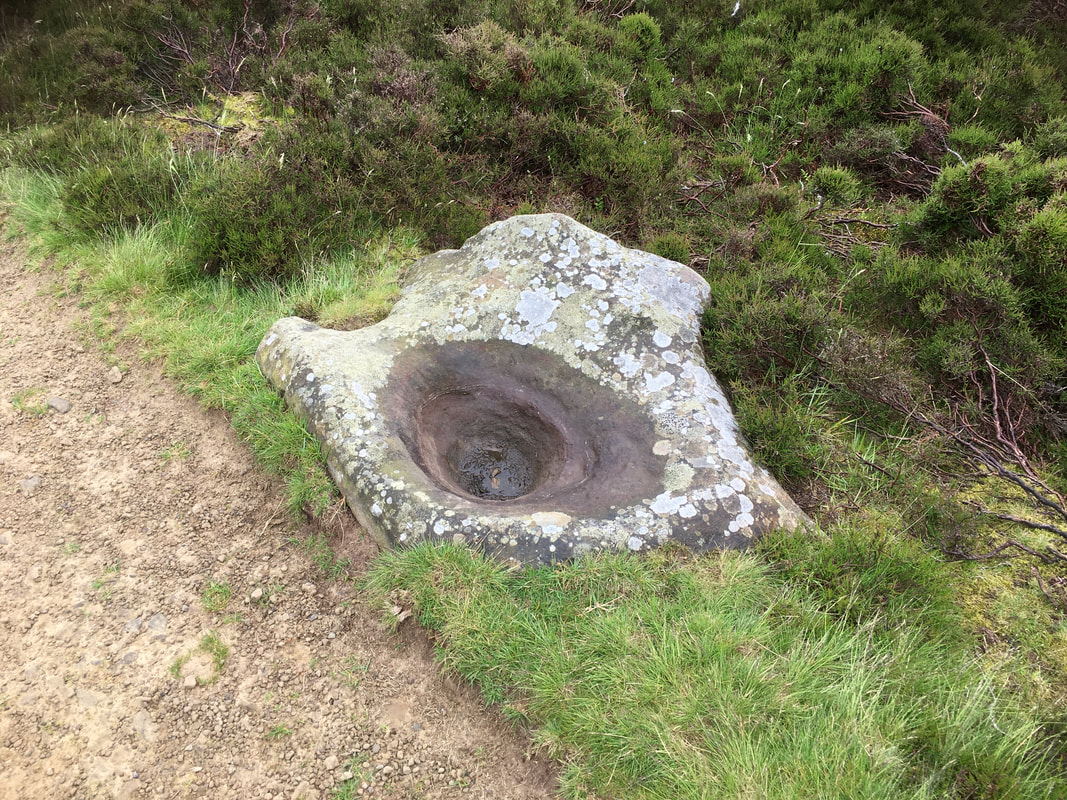 A ready made dog bowl on Urra Moor 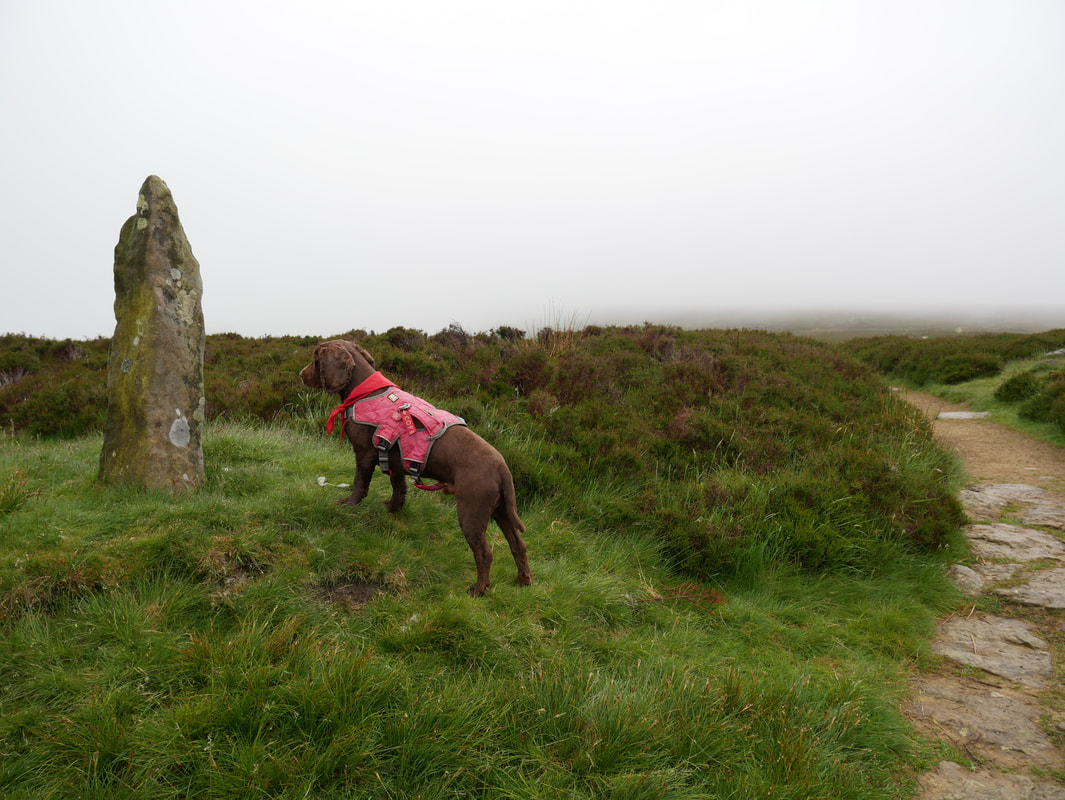 Lots of boundary stones and such like on Urra Moor - Fudge seemed to take a great interest in this specimen. 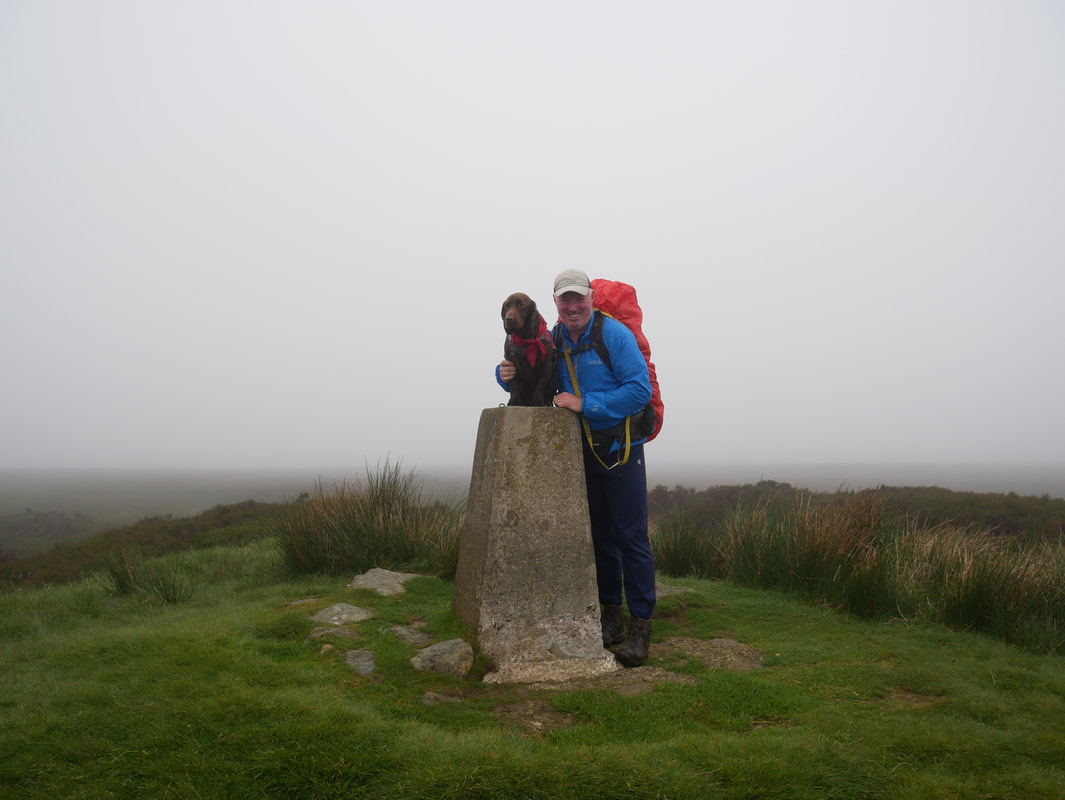 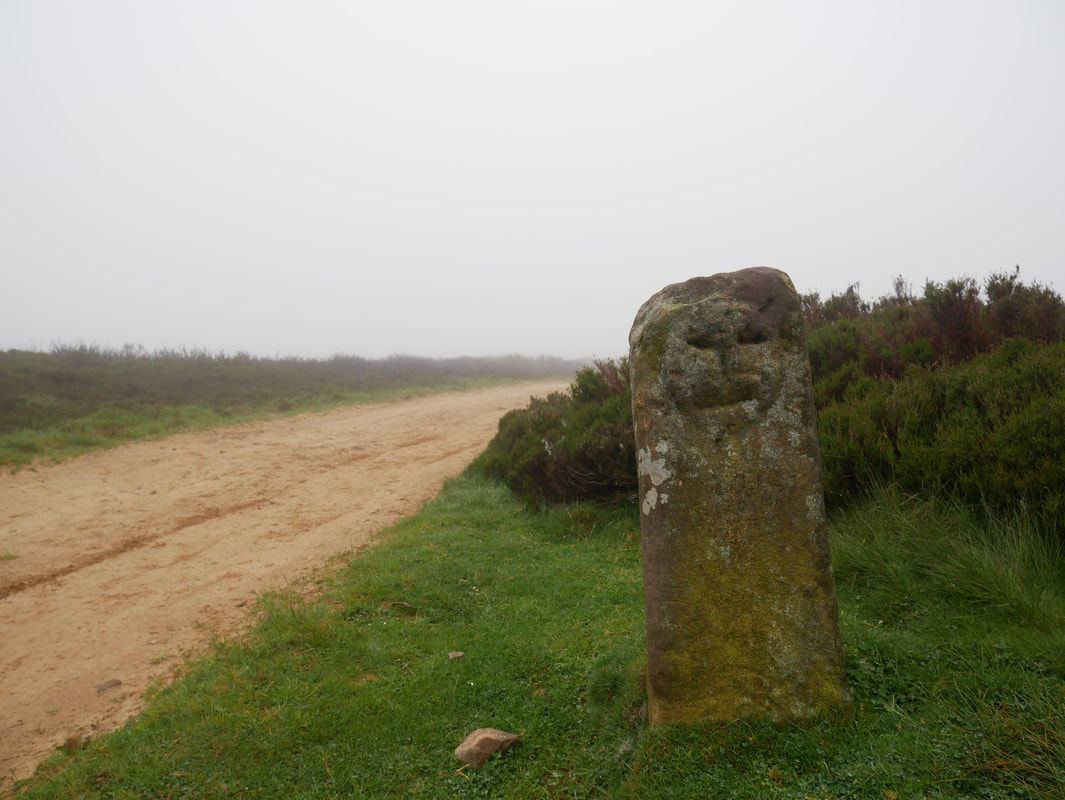 Who are you gawping at? 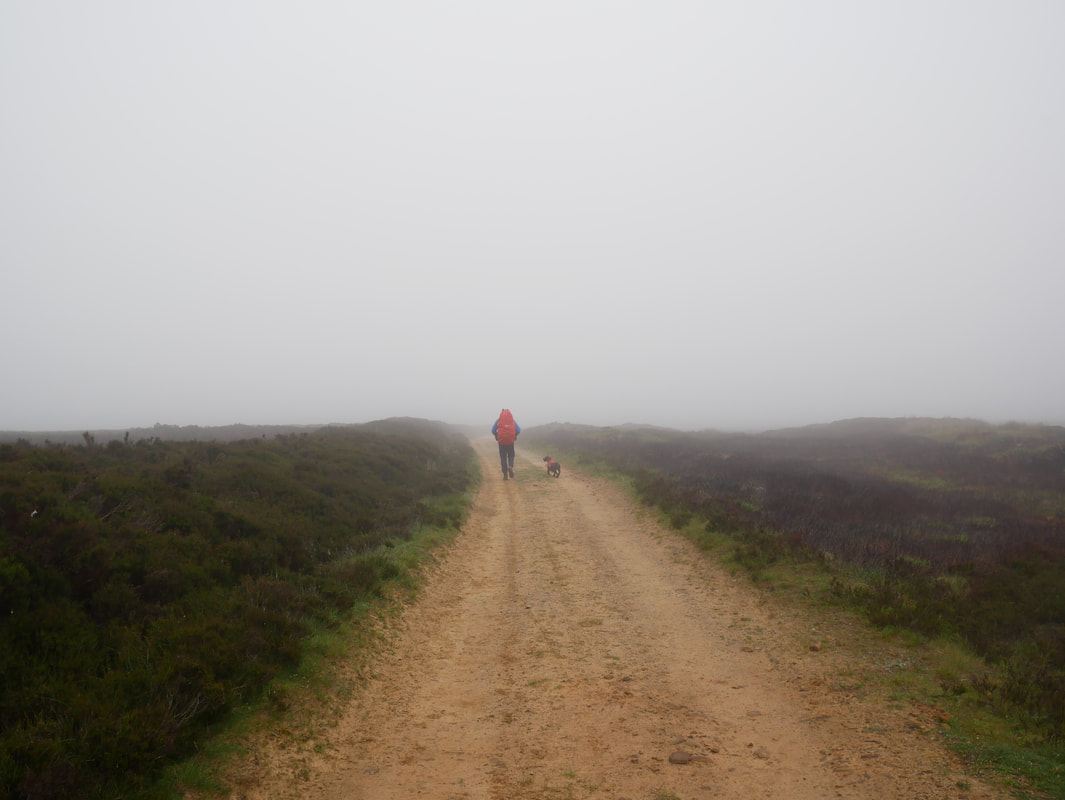 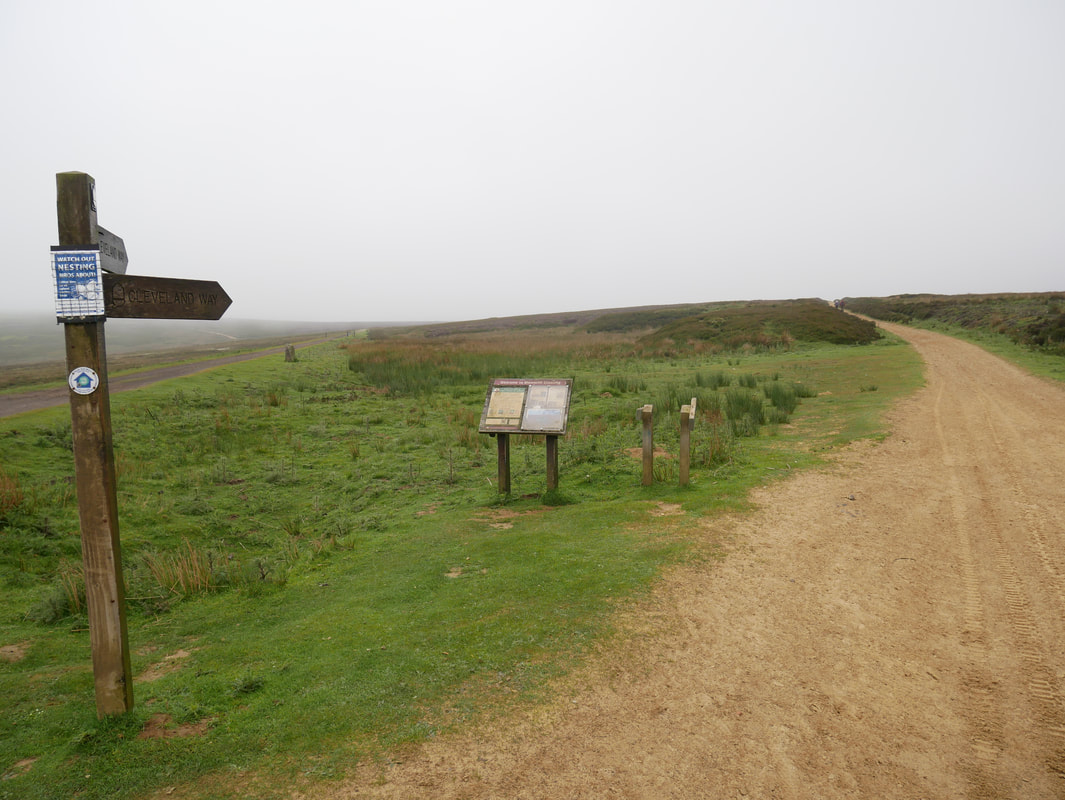 The old Ironstone Railway Crossing at Bloworth.
Many years ago the crossing was manned however the buildings, train tracks and rolling stock have long since gone from the area. 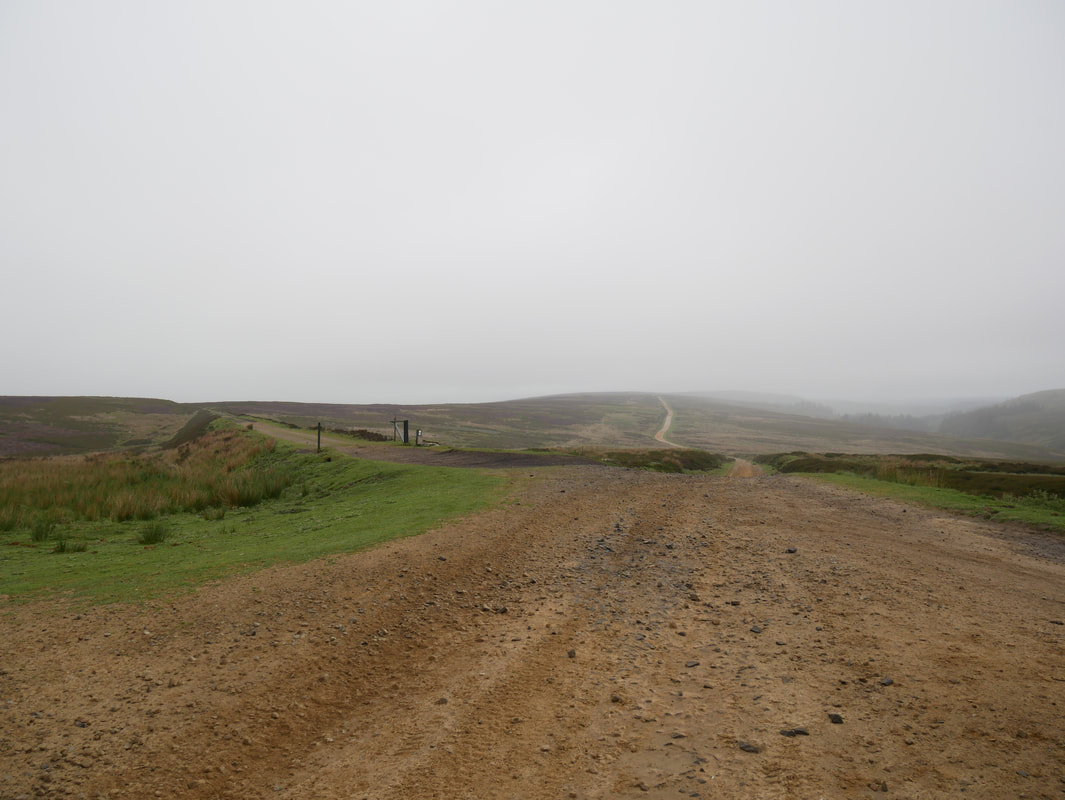 Another view of the Bloworth Crossing - the path going off to the left is the Coast to Coast route to The Lion Inn at Blakey Ridge. 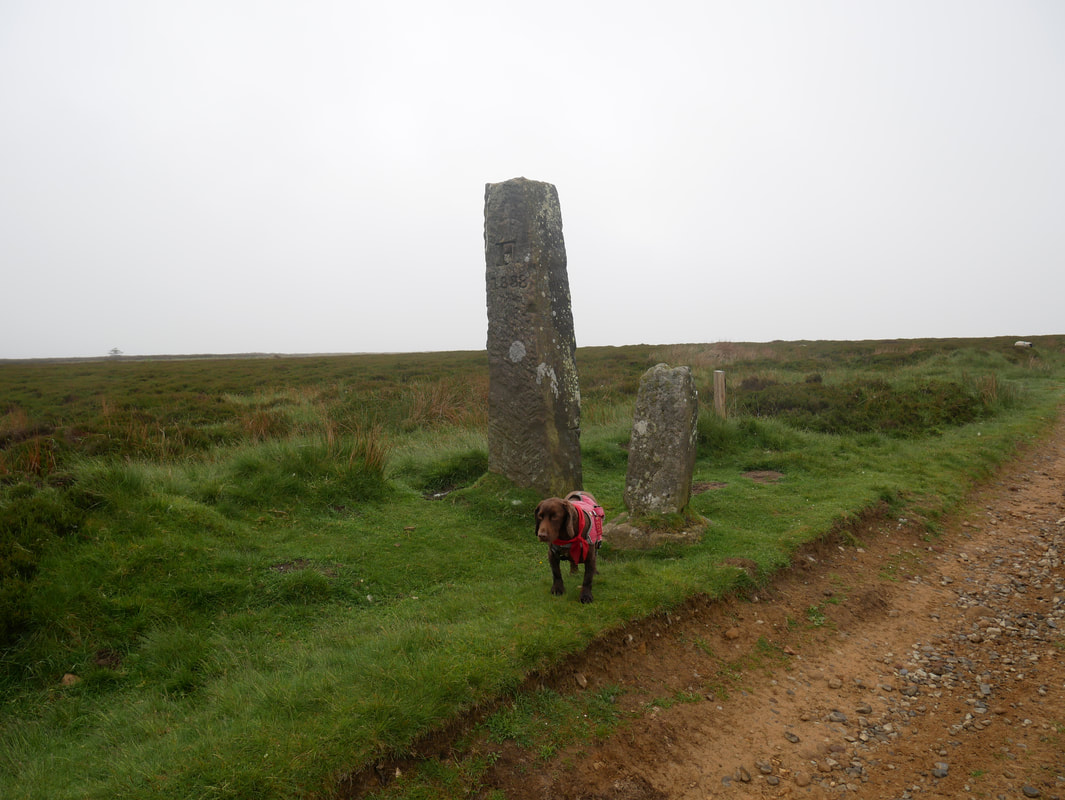 Jenny Bradley's Cross.  Apparently not named after a person but the name is thought to derive from 'Broad Ley' or a broad trackway.
The cross itself is the smaller stone of the two - the larger one is a 19th Century boundary stone to indicate the dividing line between moorland estates. 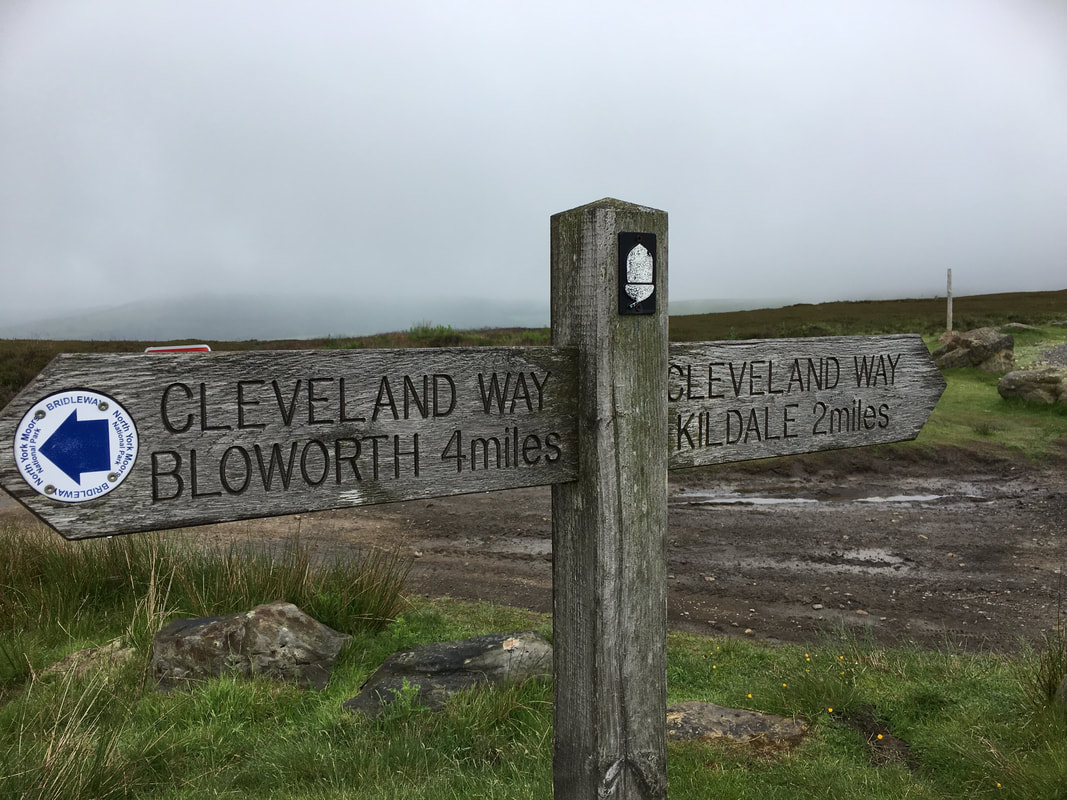 Not far now to Kildale 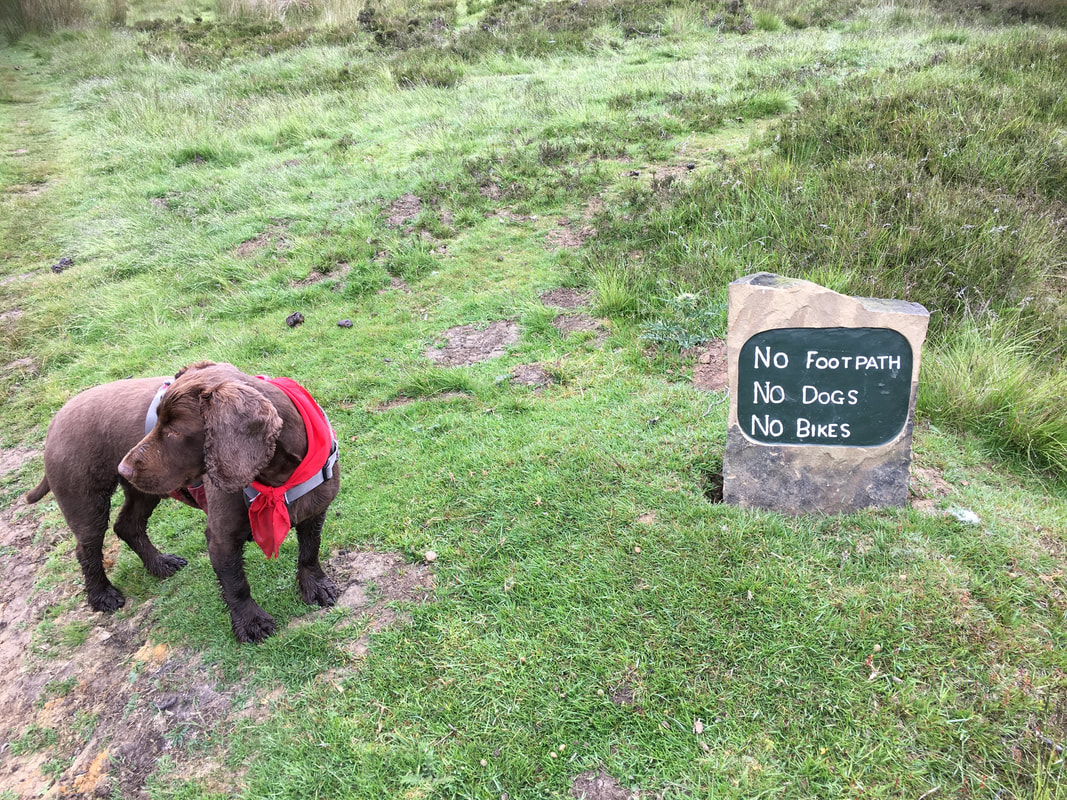 ... and no enjoying yourself either Fudge (try as he might, Fudge cannot ride a bike) 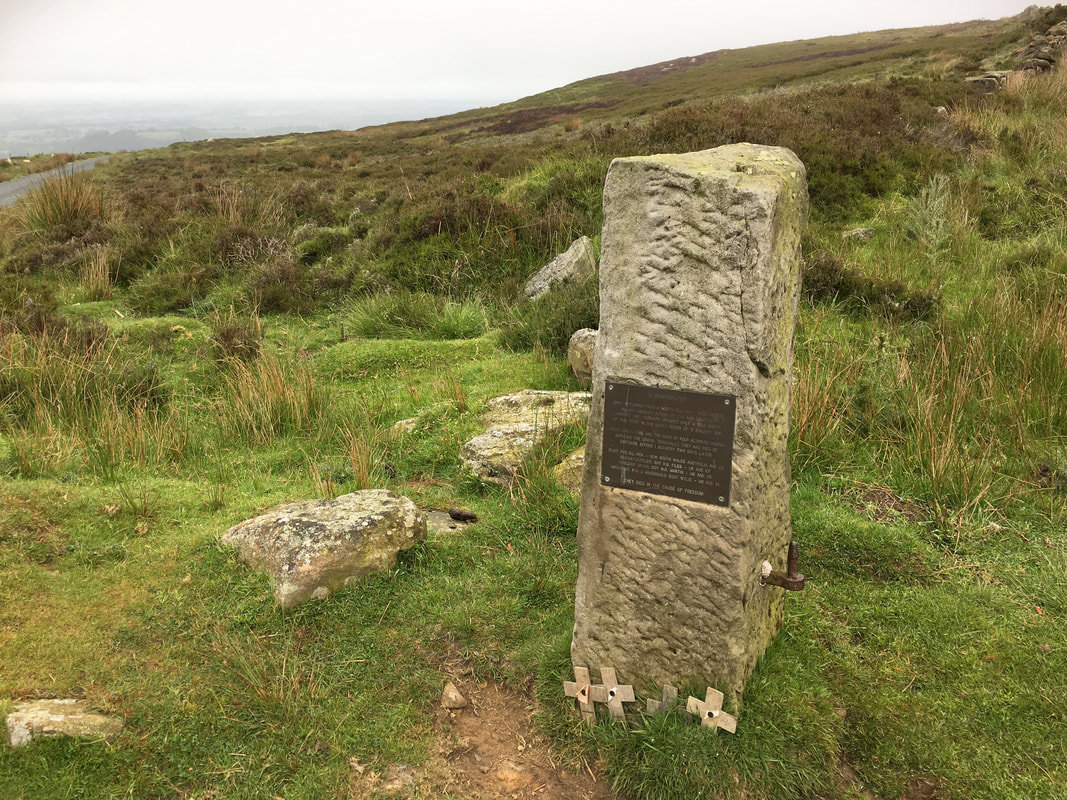 The memorial near Kildale to the RAF Hudson Aircraft that crashed within half a mile of this spot in January 1941.  The aircraft was returning from a night time North Sea patrol and whilst the 4 crew members (1 Australian and 3 British) survived the crash, they unfortunately perished from exposure.  Their bodies were discovered 2 days later.  They will never be forgotten. 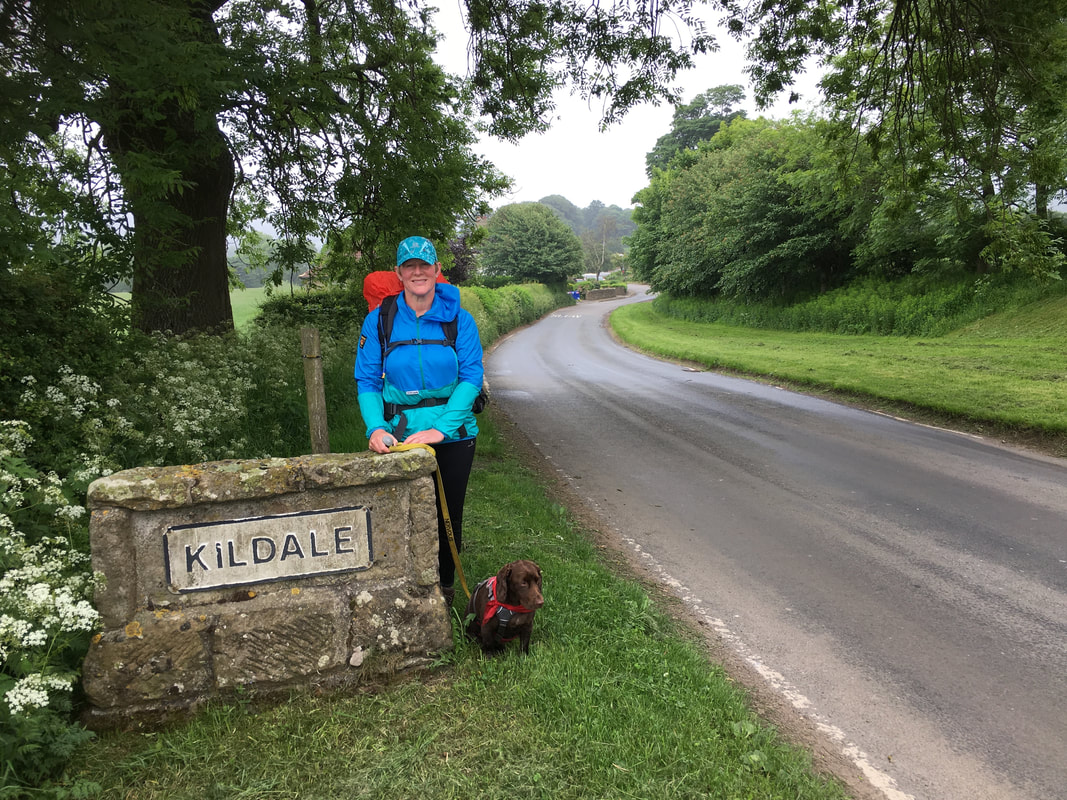 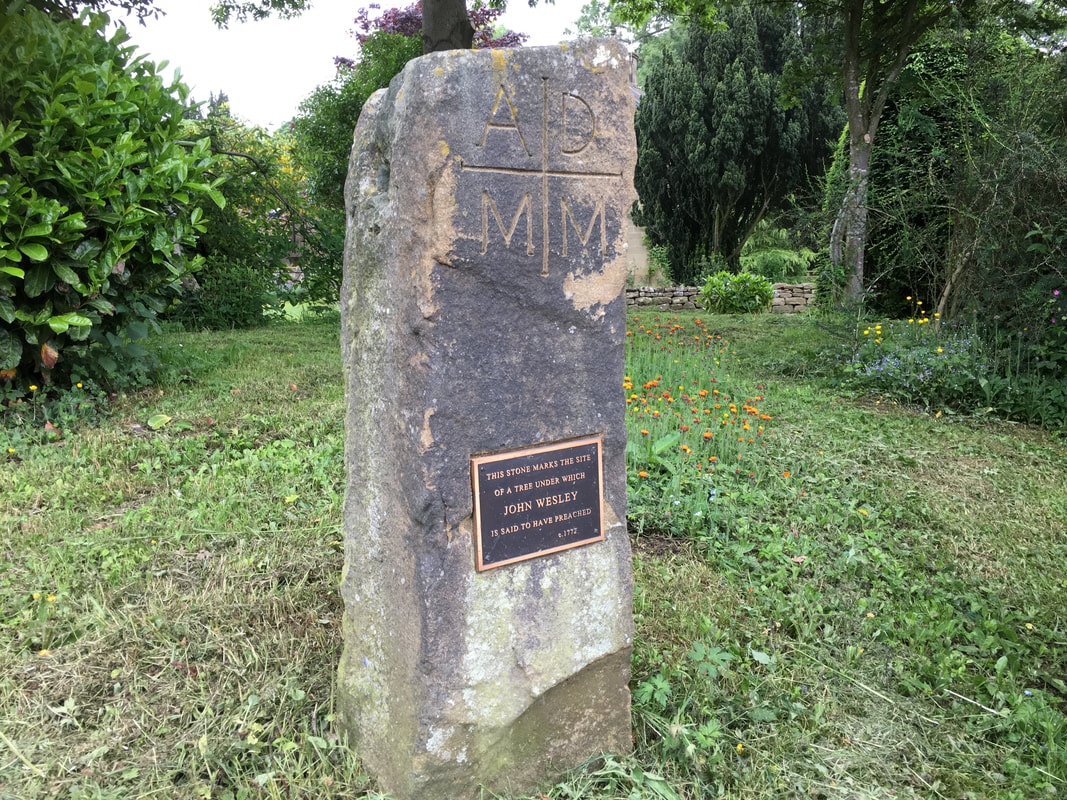 The stone marker in Kildale which commemorates when Methodist founder John Wesley preached here in 1772. 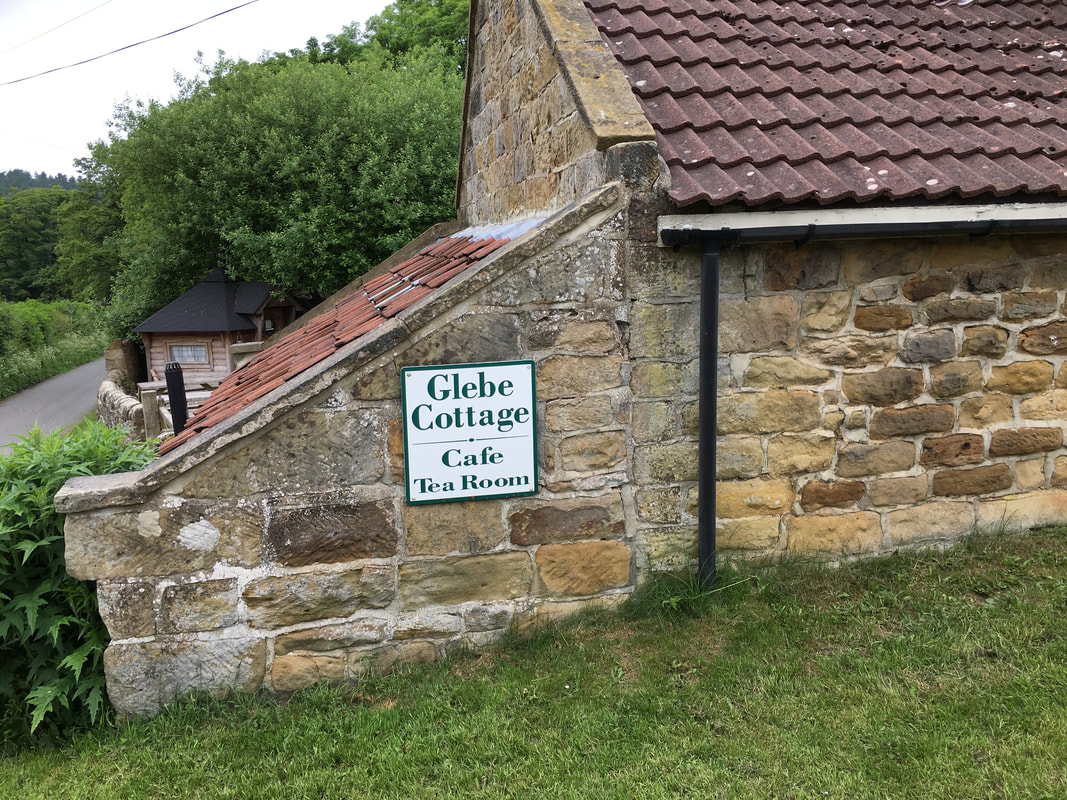 And yes of course - it was shut, on a Friday afternoon in June - cheers for that. 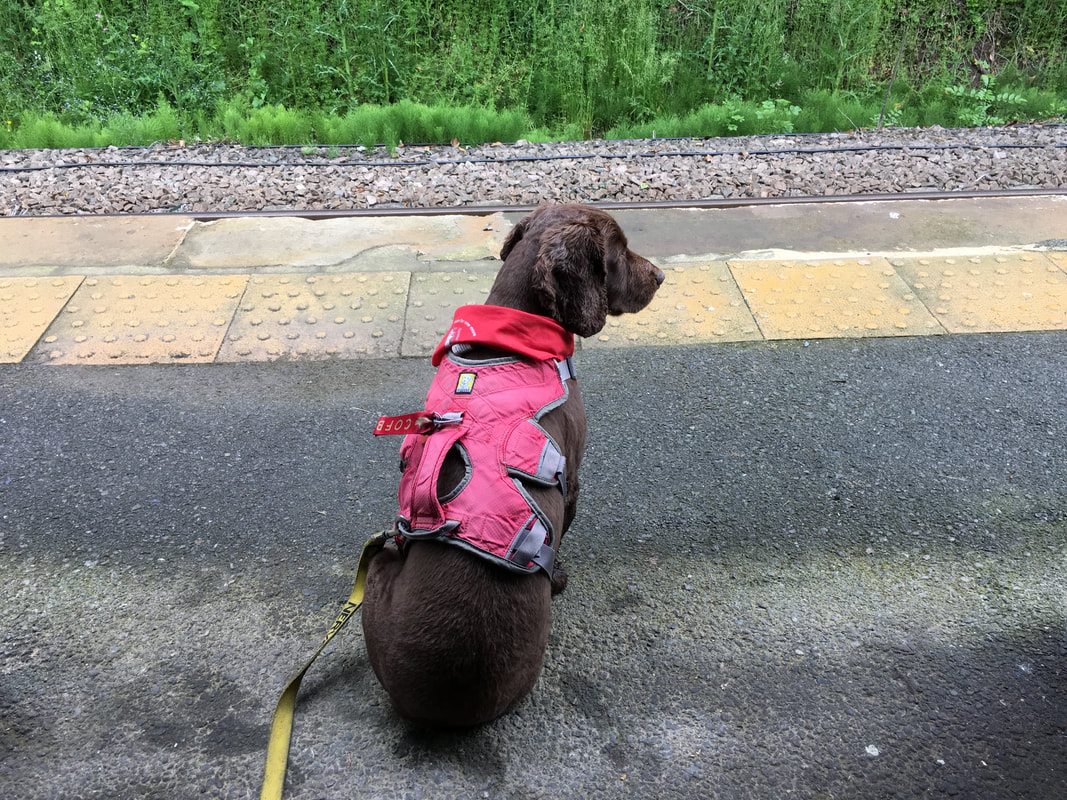 Fudge doing a bit of trainspotting at Kildale Station 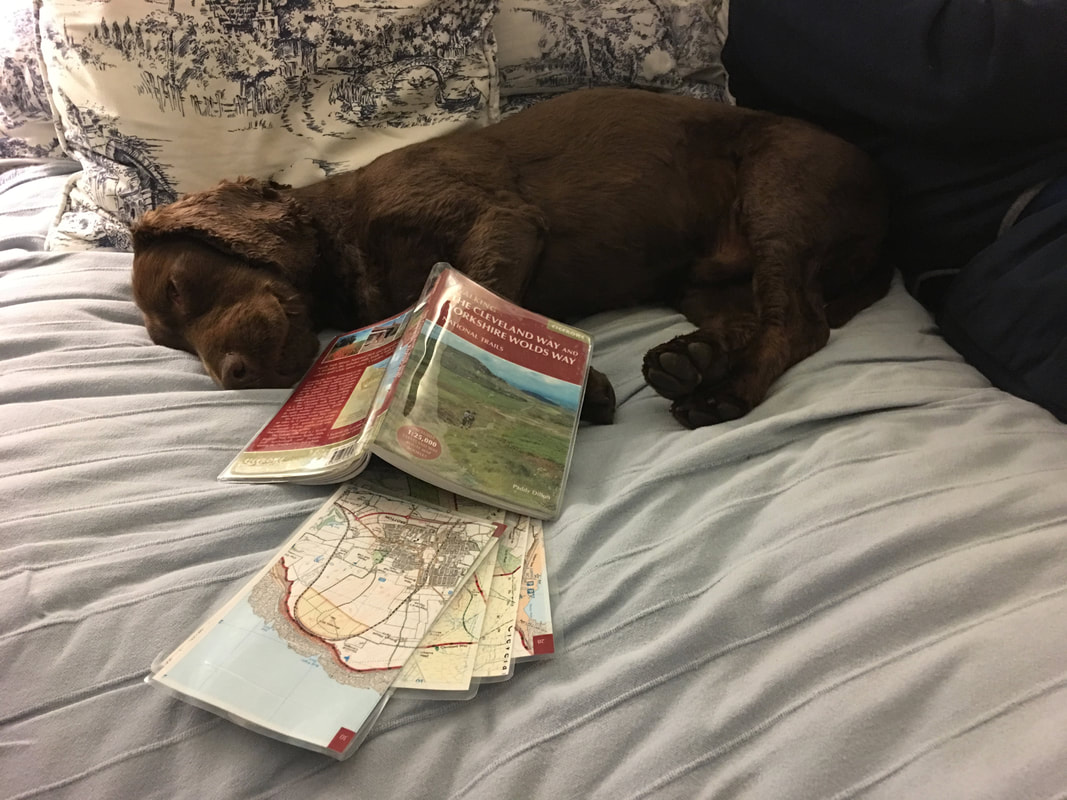 I've had enough of this planning lark - zzzzzzzzzzzzzz
Overnight Accommodation