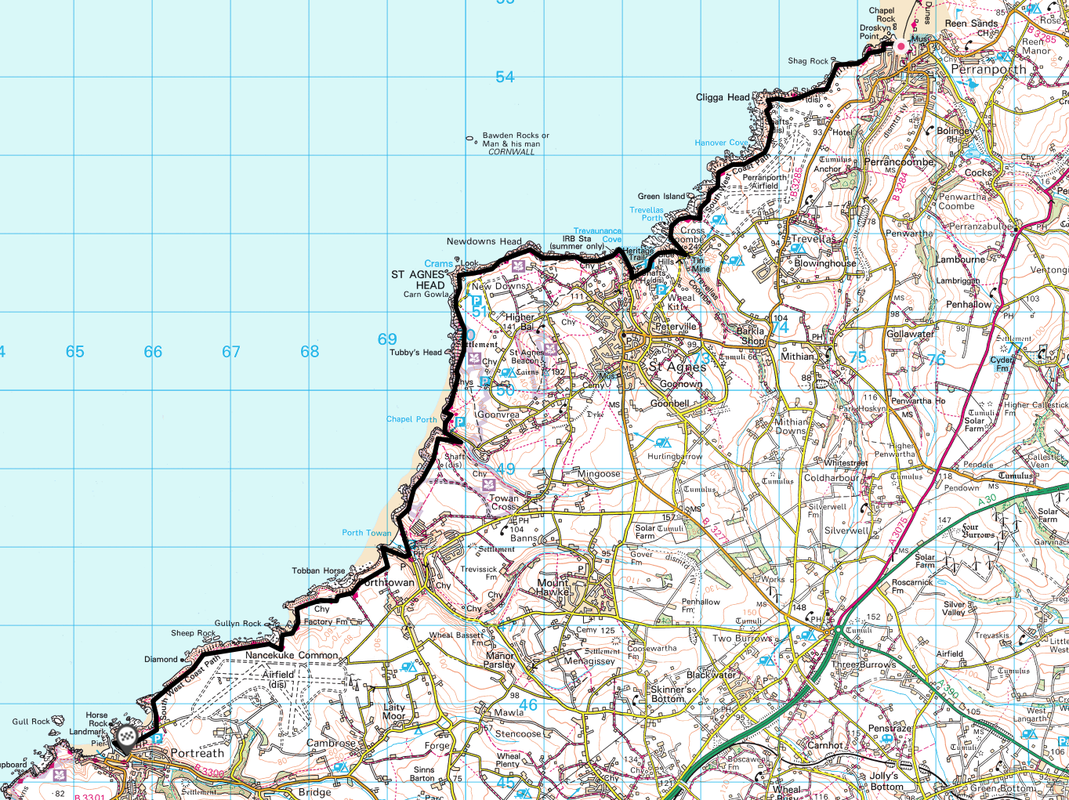 A scorcher of a day!! Nice stay at Seiners although the bed was too small. Leaving Perranporth we bumped into Nicky who we had heard of from another walker a few days ago - two sticks, no maps & wild camping - quite a character and a really pleasant bloke. Shortly after meeting Nicky we met a couple coming the other way who took it upon themselves to lecture the 3 of us as to the correct route from Shag Rock - there are two ways, one being via the mine shafts but they were impressing upon us the merits of only going the way they had come which was via the shafts. We stuck to the original route closest to the sea which was superb. We walked with Nicky for a while and chatting to him and found out he had started on 7 May but had 3 days laid up in Bude with Flu.

After a mile or so we let Nicky crack on, however later on we met him again as he was sat outside the Driftwood Spars pub in St Agnes therefore we stopped for a drink there too. We sat in the shade for about 45 minutes just watching the world go by. Just as we were leaving, who pulls up but a guy I did Officer Training with at Britannia Royal Naval College in Dartmouth - he is now an artist specialising in Pastels - his website is here.

Nice break at Chapel Porth where Fudge had a swim and we partook of Diet Coke & Ice Cream. There was a very industrial feel to today with lots of evidence of mining activity in this area, particularly at Wheal Coates. From Porthtowan to Portreath is just delightful walking and we were soon descending into the village which was busy with people. Nice welcome from Gillian at our B&B - we were in the Annex next door with a nice big room and a decent sized bed. Next door to the B&B was The Portreath Arms where we had Dinner - the locals making a right old fuss of Fudge which he of course loved.​ 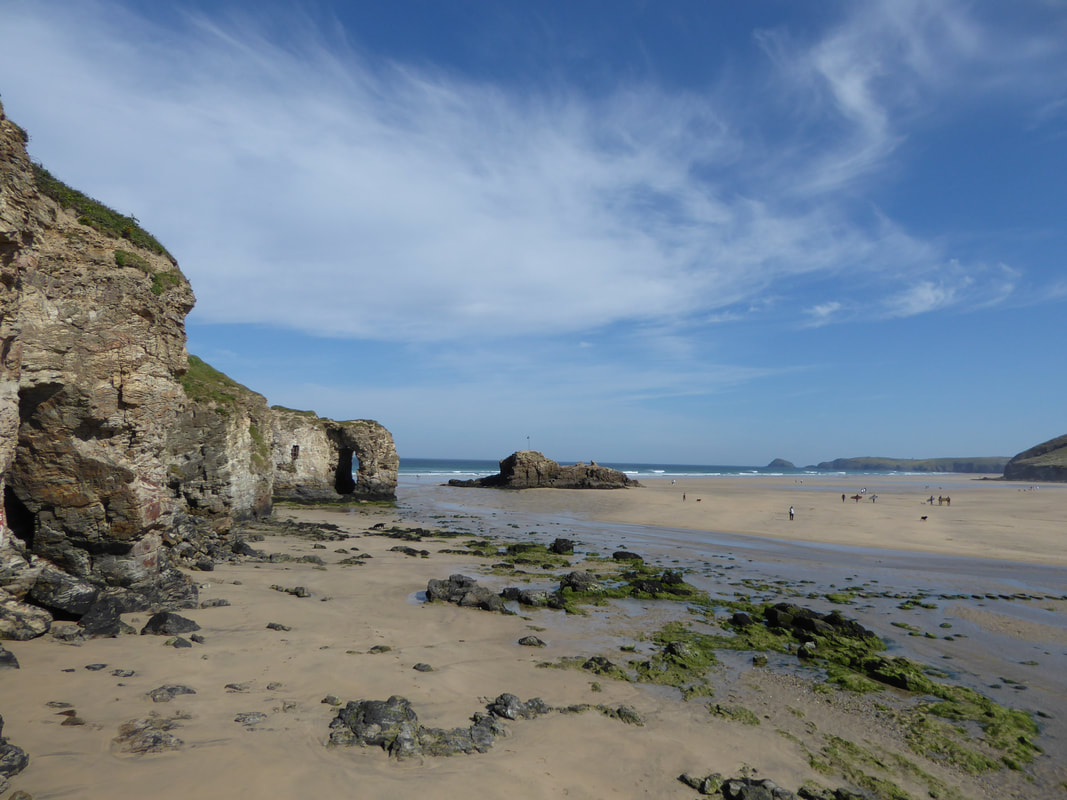 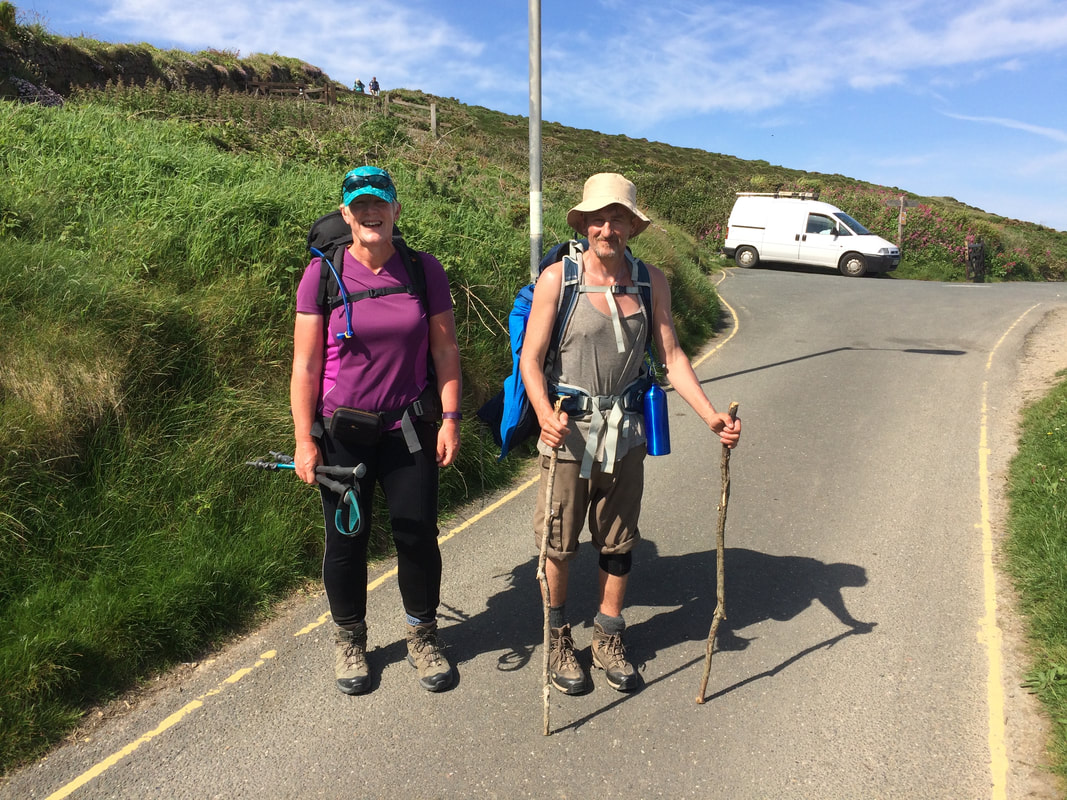 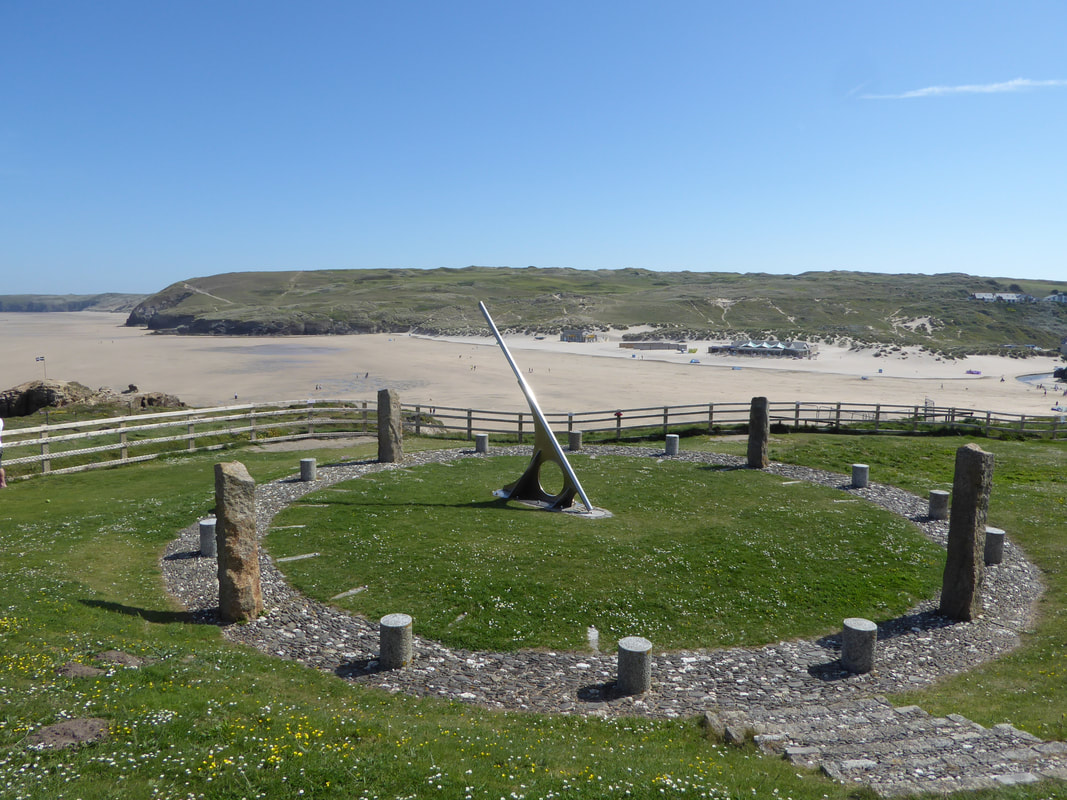 The Perranzabuloe Millennium Sundial near Perranporth, also known as the Droskyn Clock.  Designed by a local man Stuart Thorn, the sundial is set on 'Cornish Time' rather than GMT which means it is 20 minutes fast.  We arrived here at 1015 therefore the sundial looks fairly accurate. 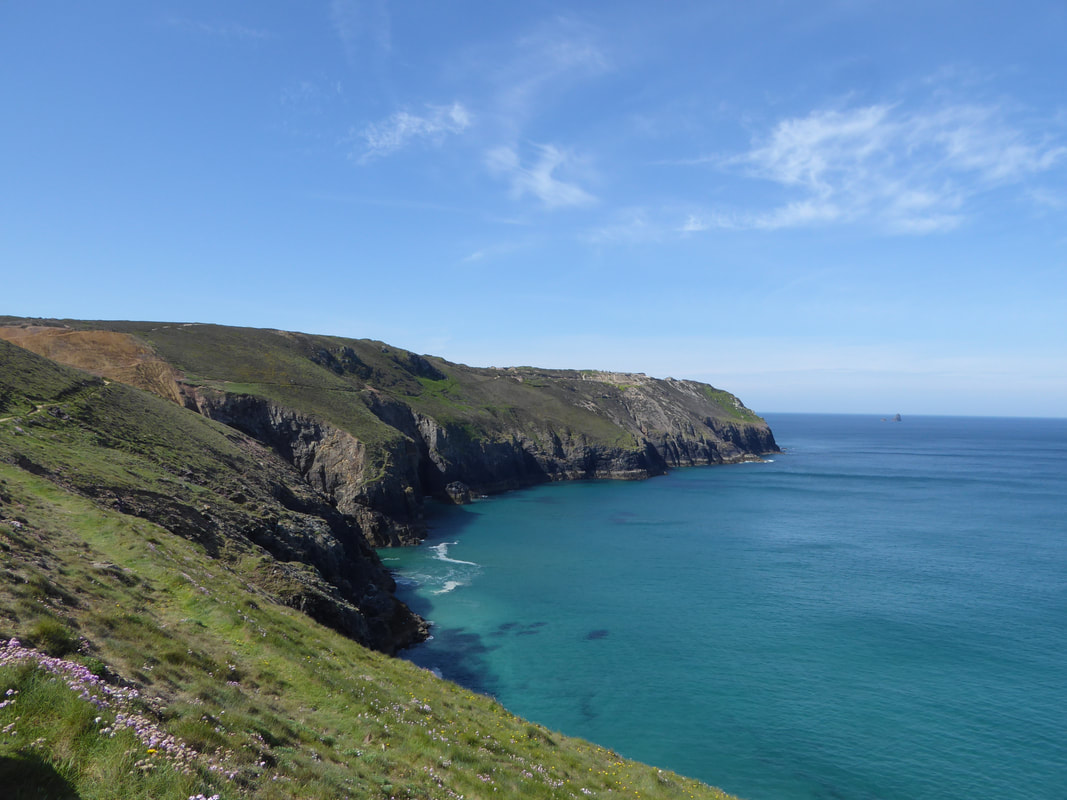 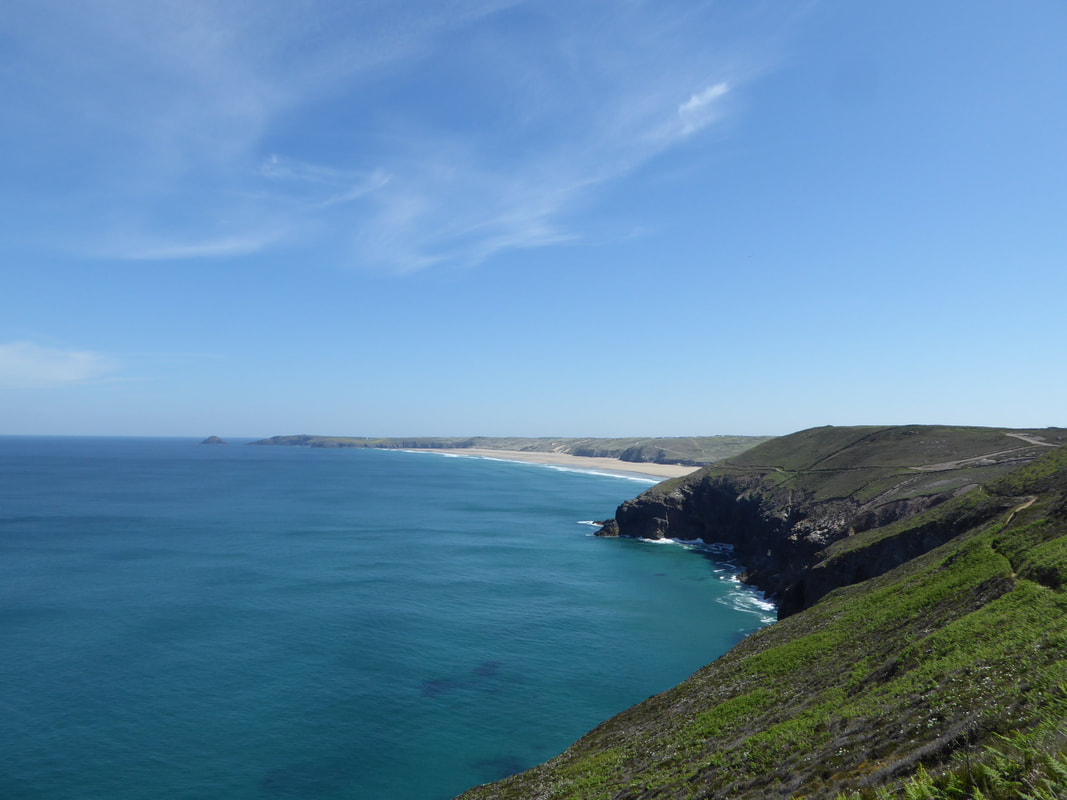 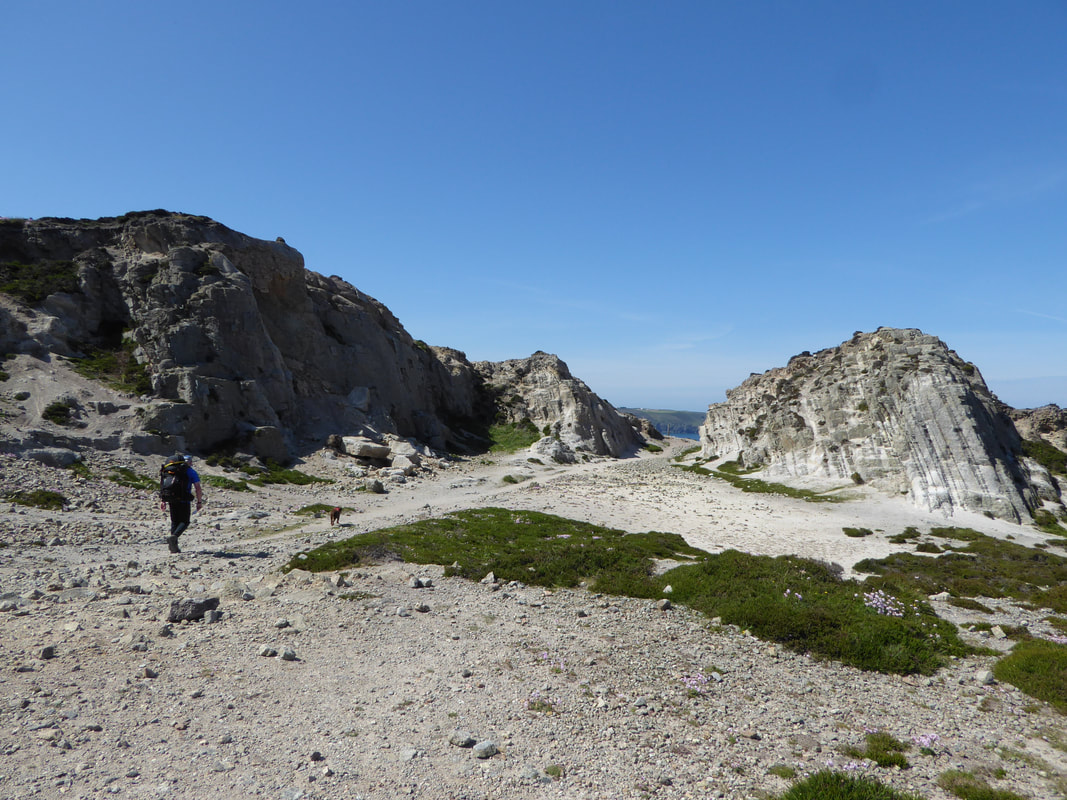 Evidence of quarrying on Cligga Head - the sheeted greisen veins can clearly be seen on the right hand rock. 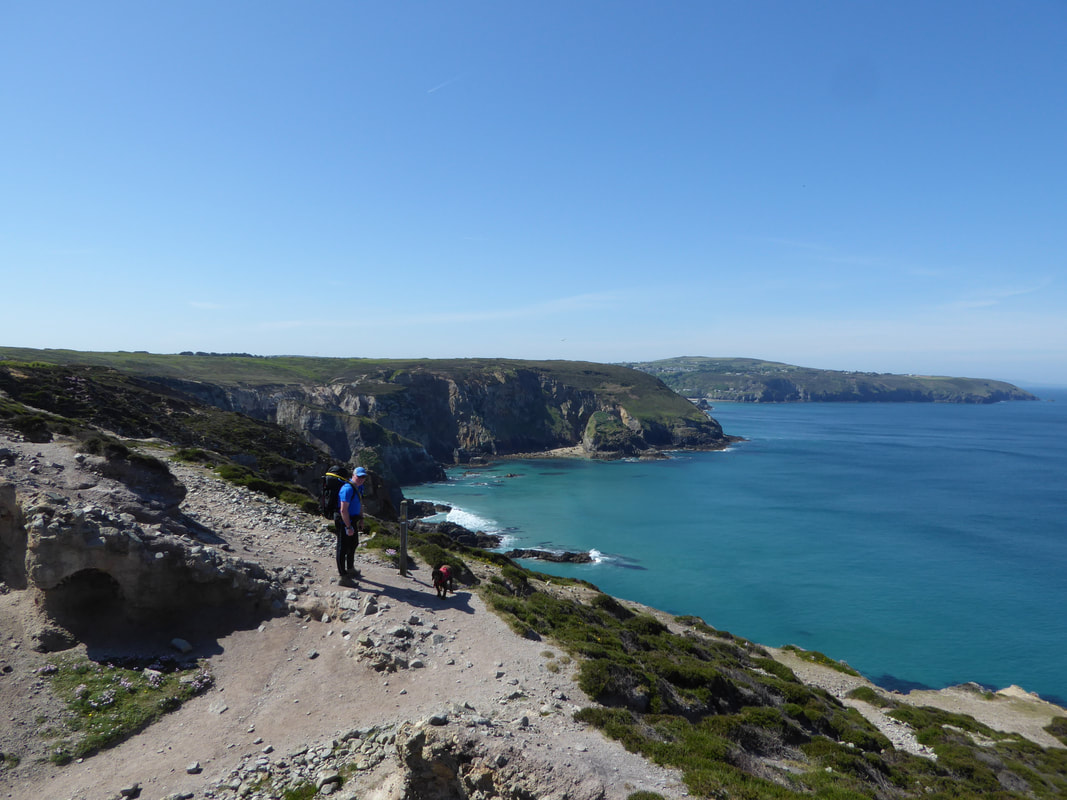 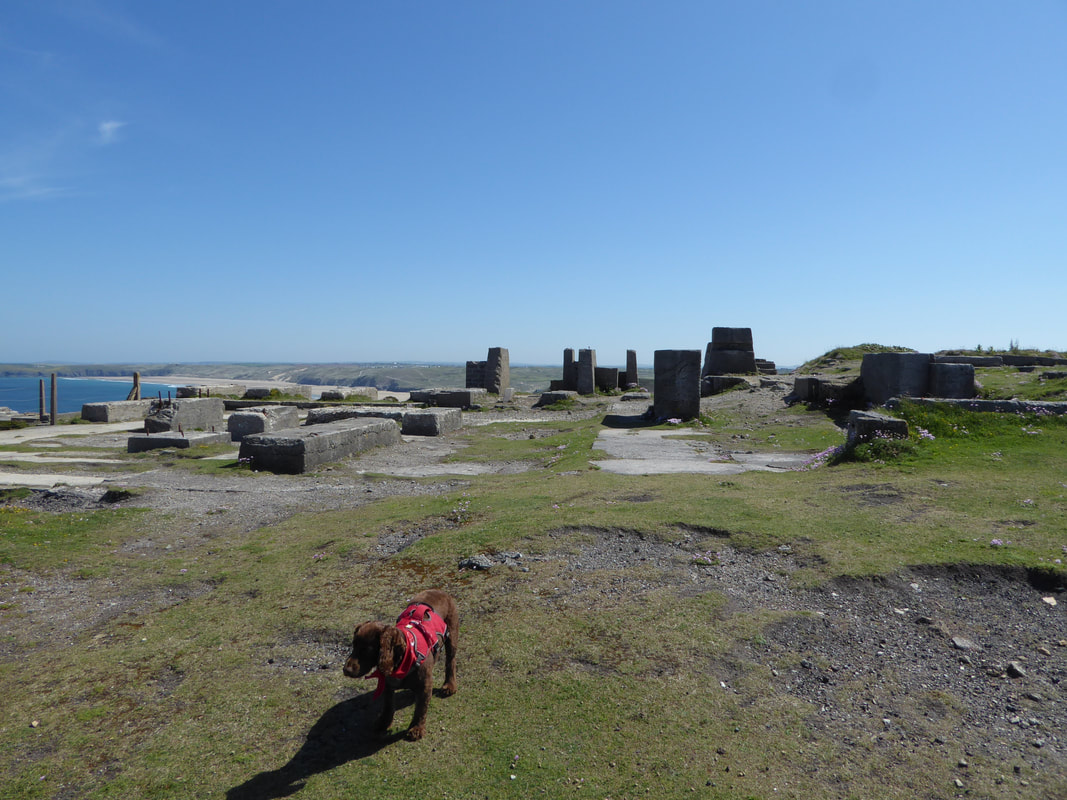 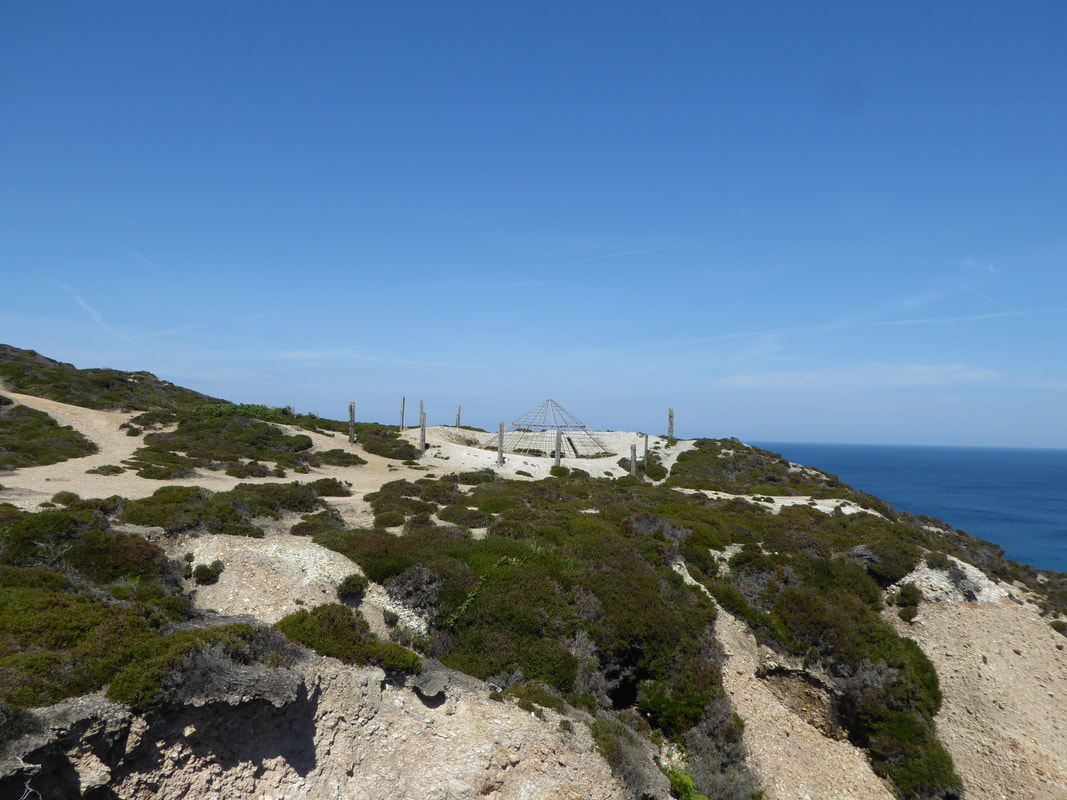 A Mine Shaft cover on Cligga Head 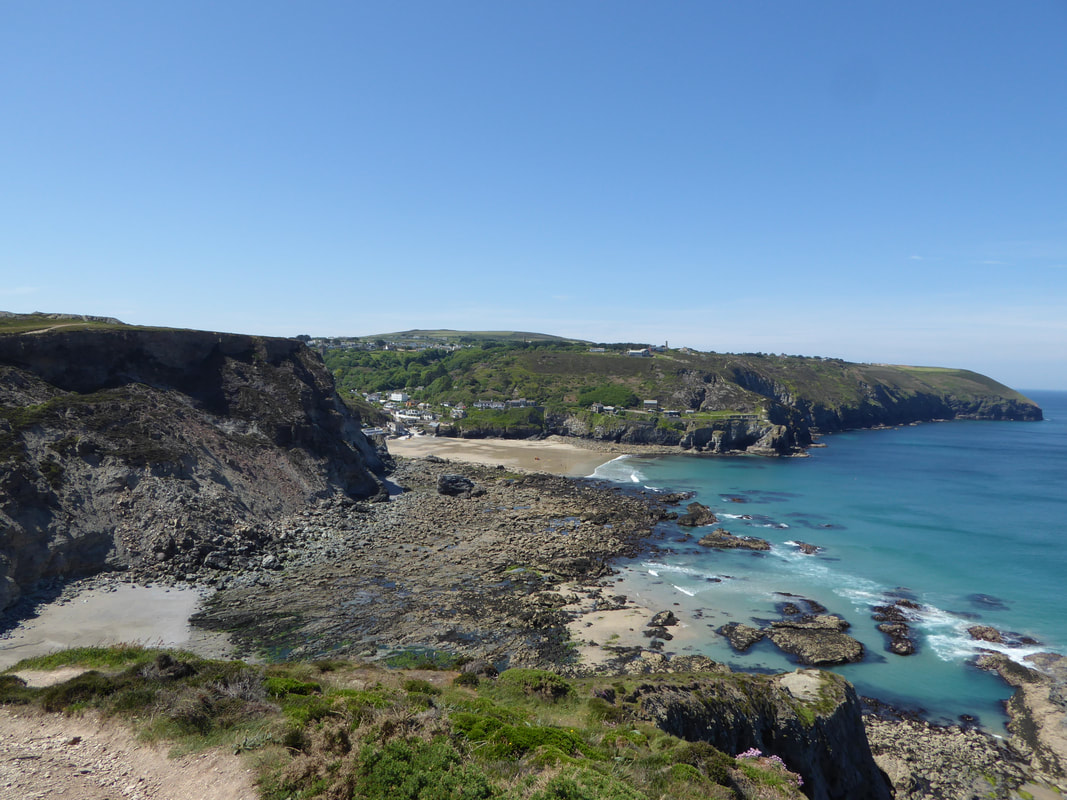 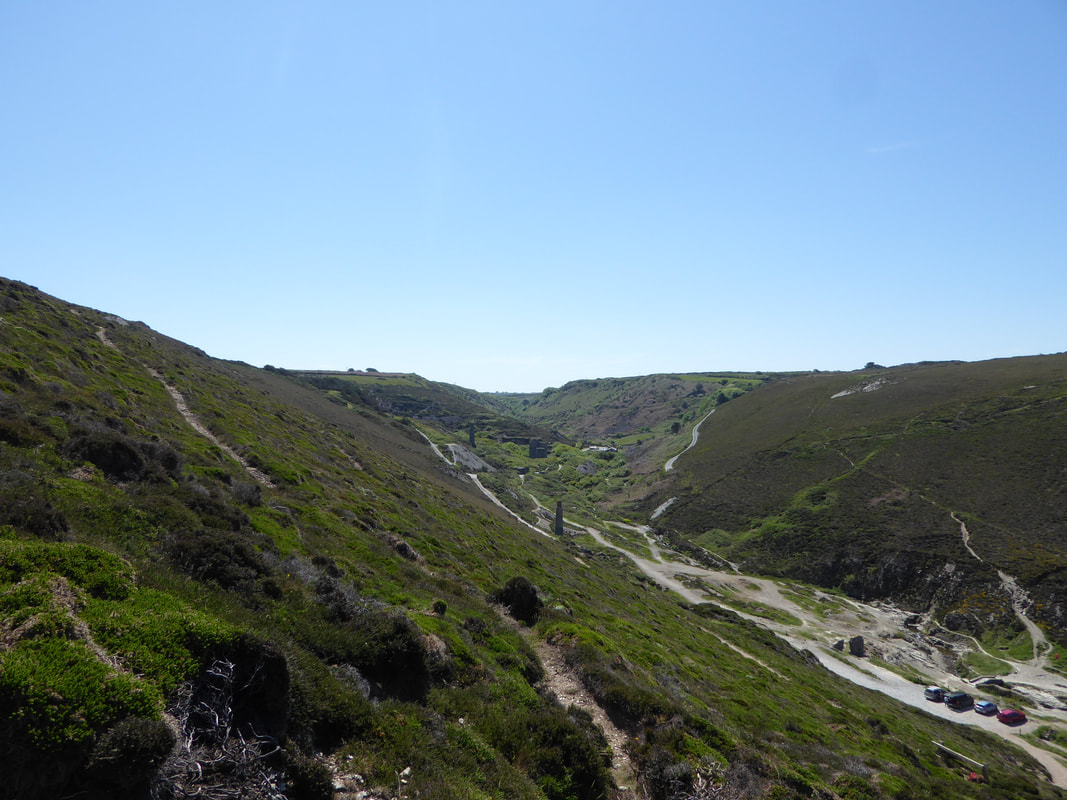 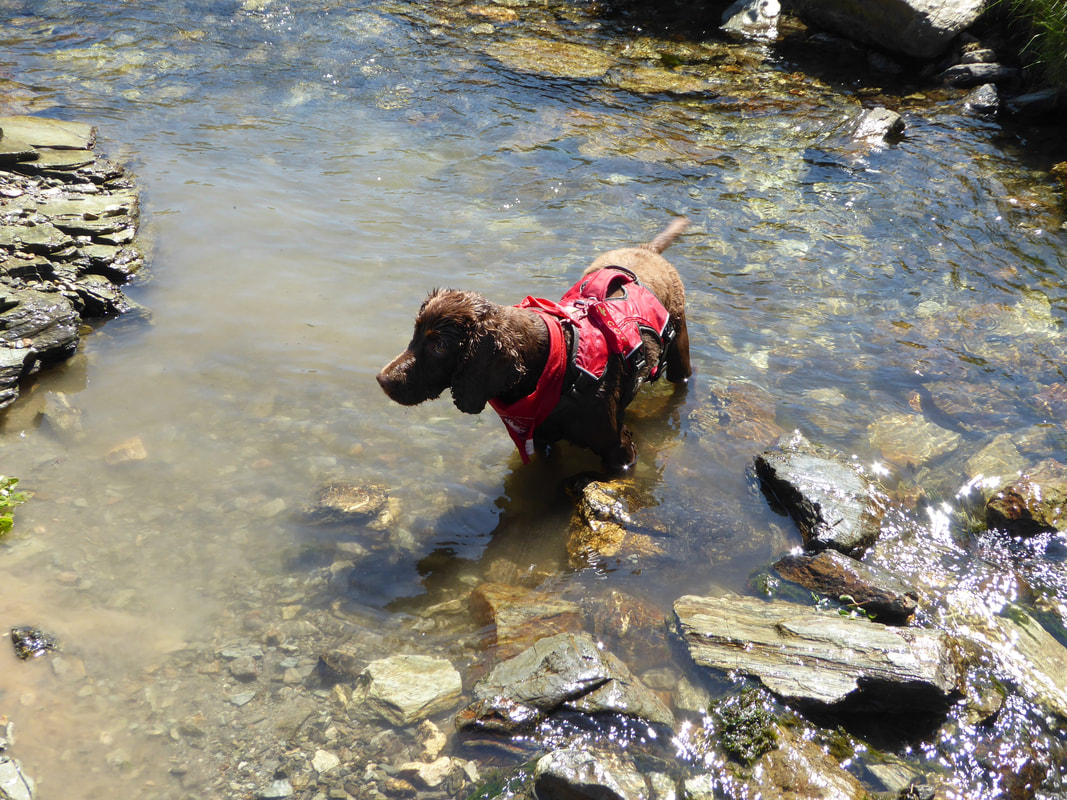 Another chance for Fudge to cool down near Trevaunance Cove 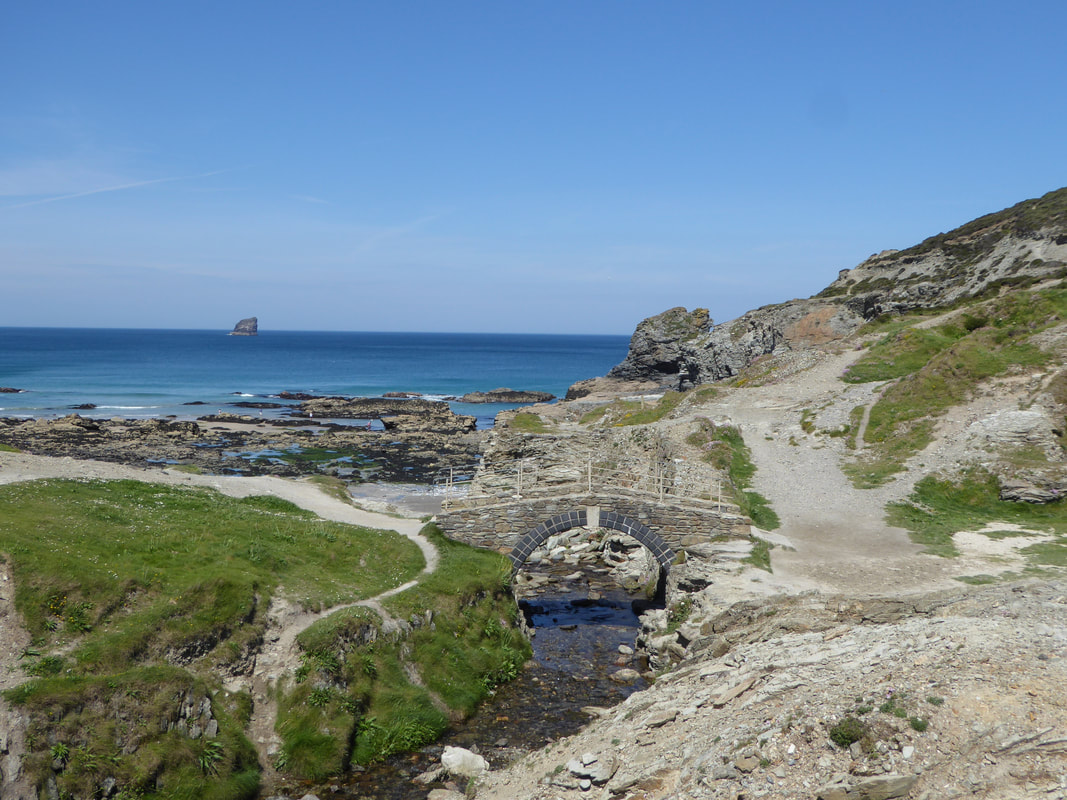 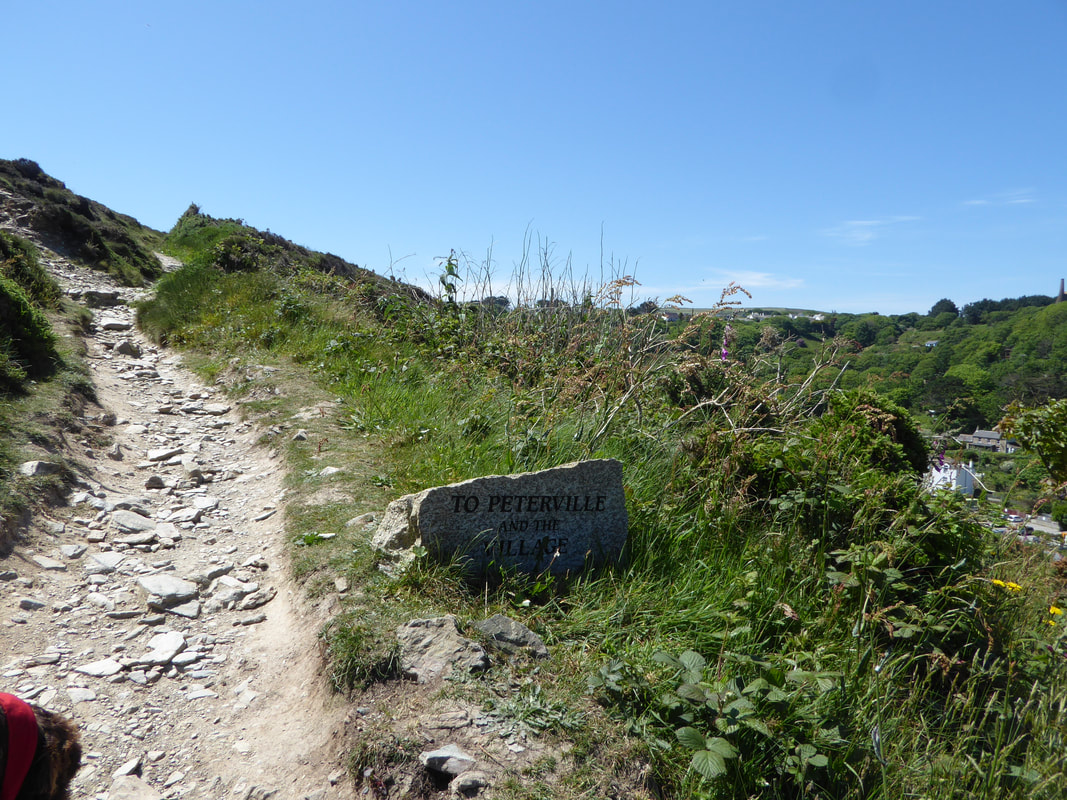 Seeing this sign reminded me of The Prisoner (I am not a Number!!) 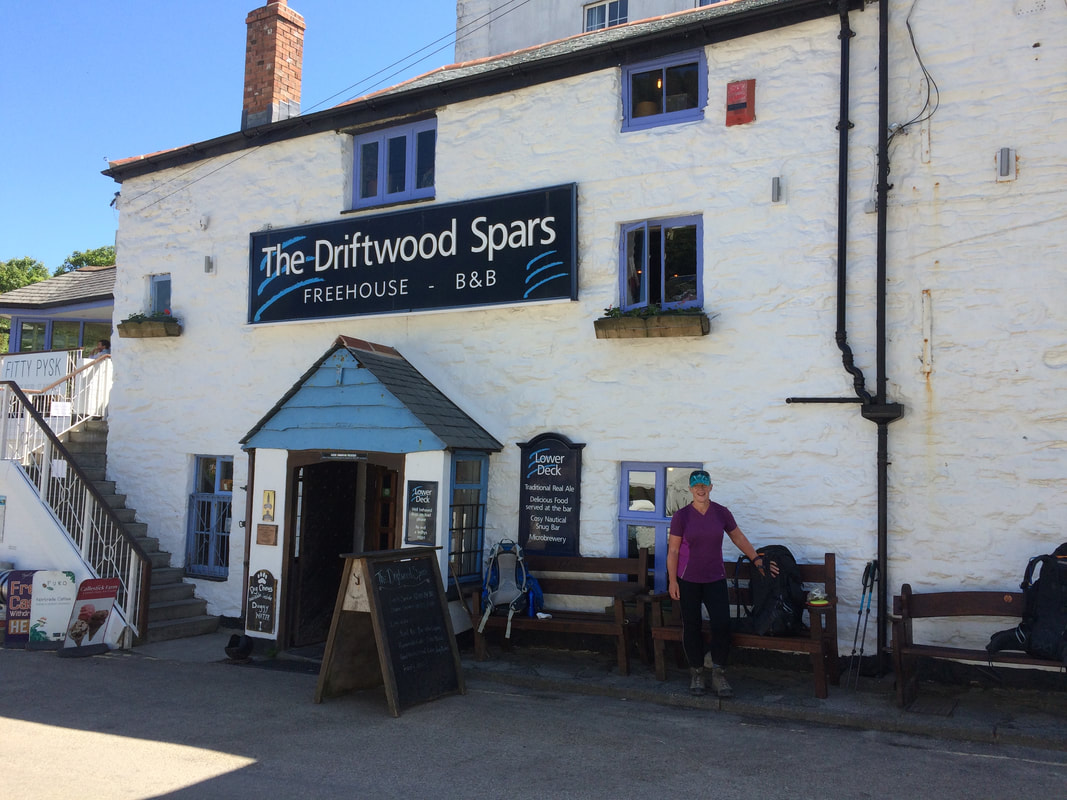 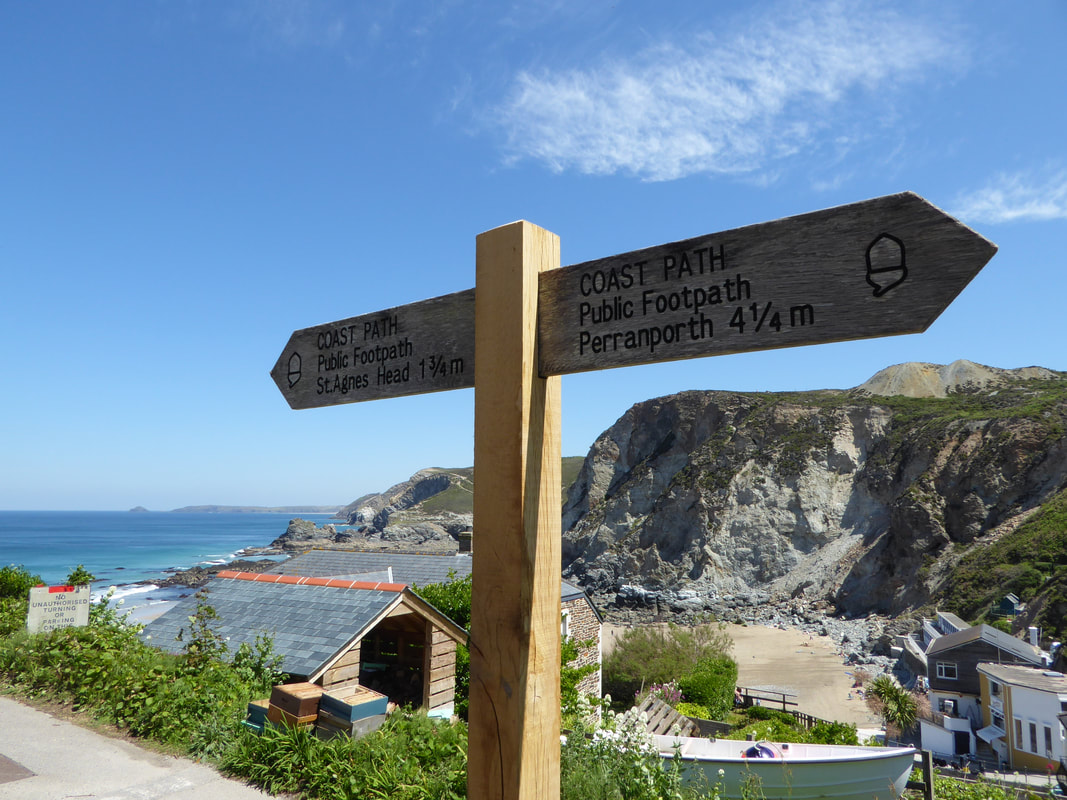 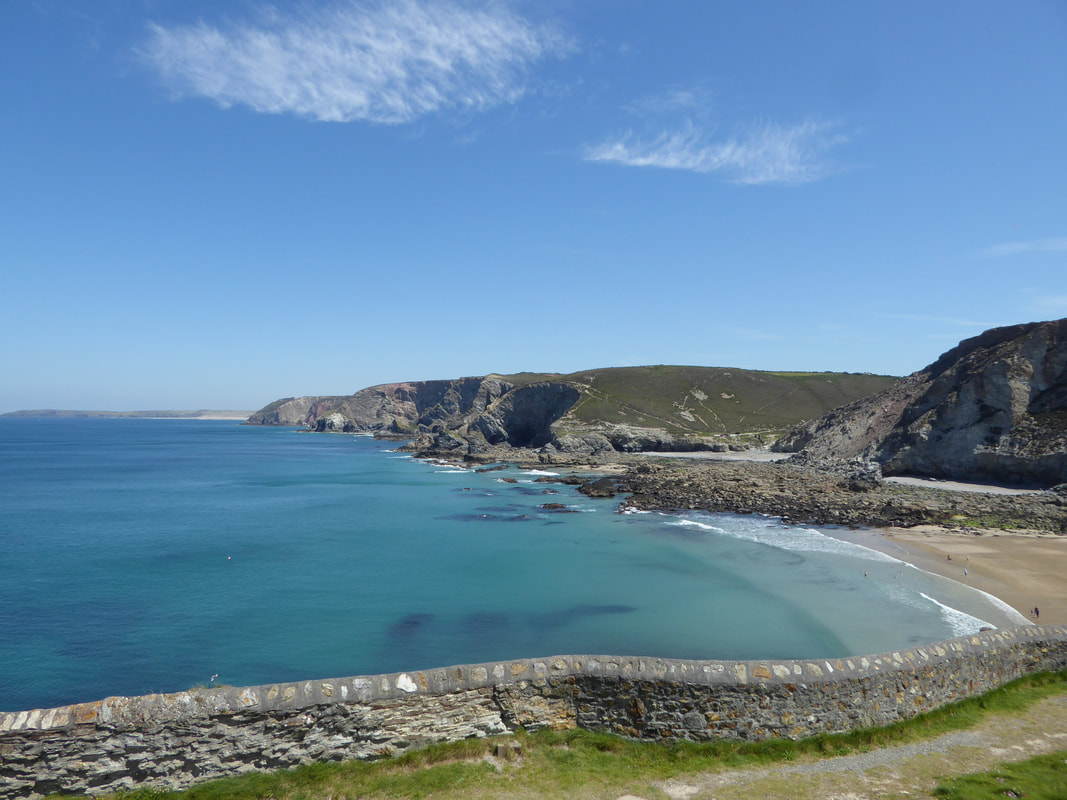 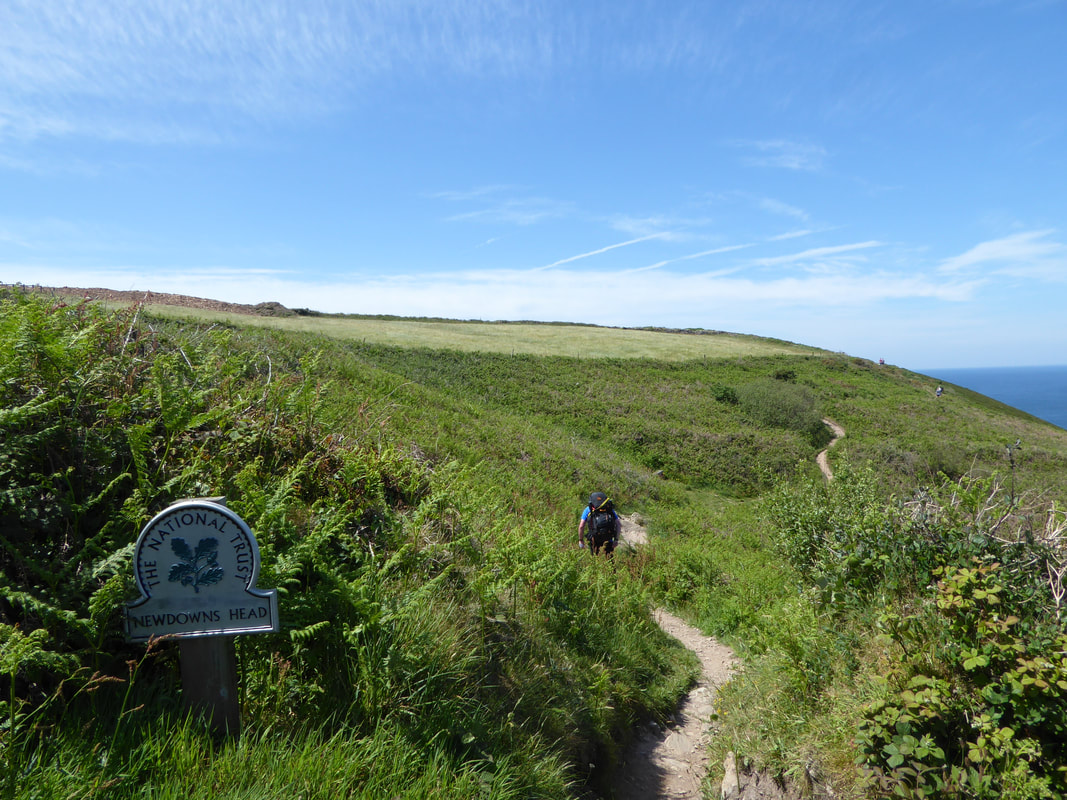 ​This was really pleasant walking to Newdowns Head 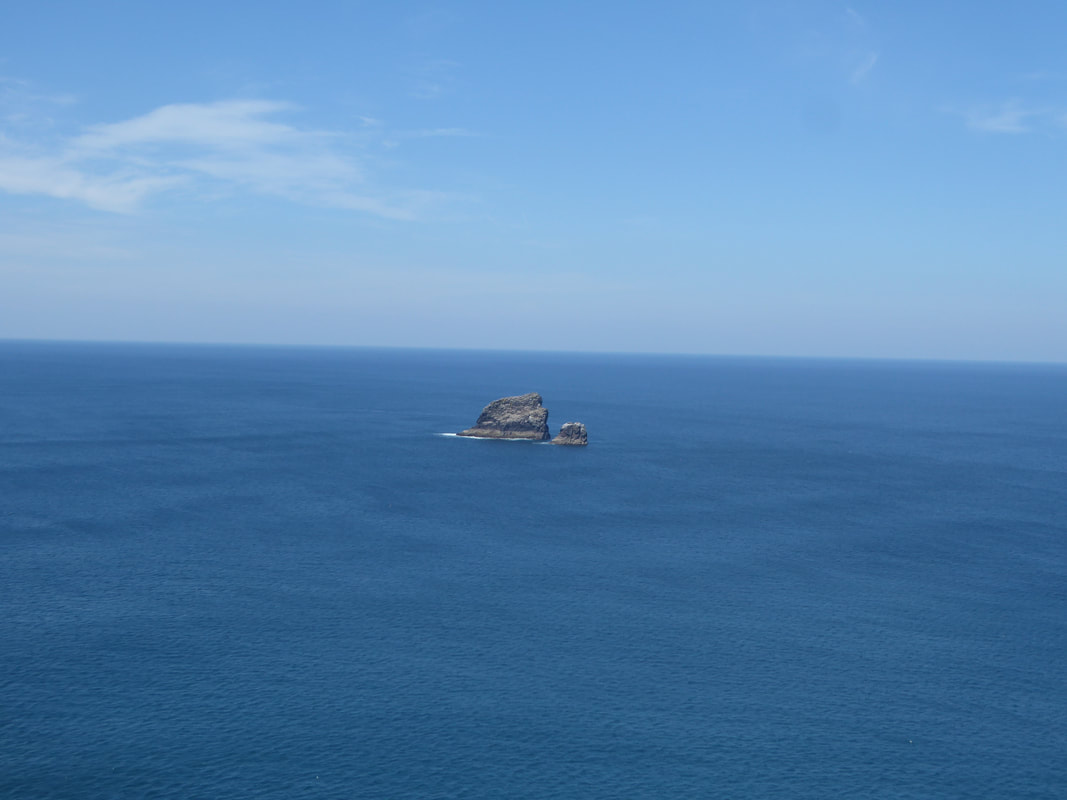 Bawden Rocks - also known as The Cow & Calf or Man & His Man.
A local legend claims that the rocks were thrown out to sea by a child-eating giant called Bolster, after whom Bolster Day was named
​St Agnes Head 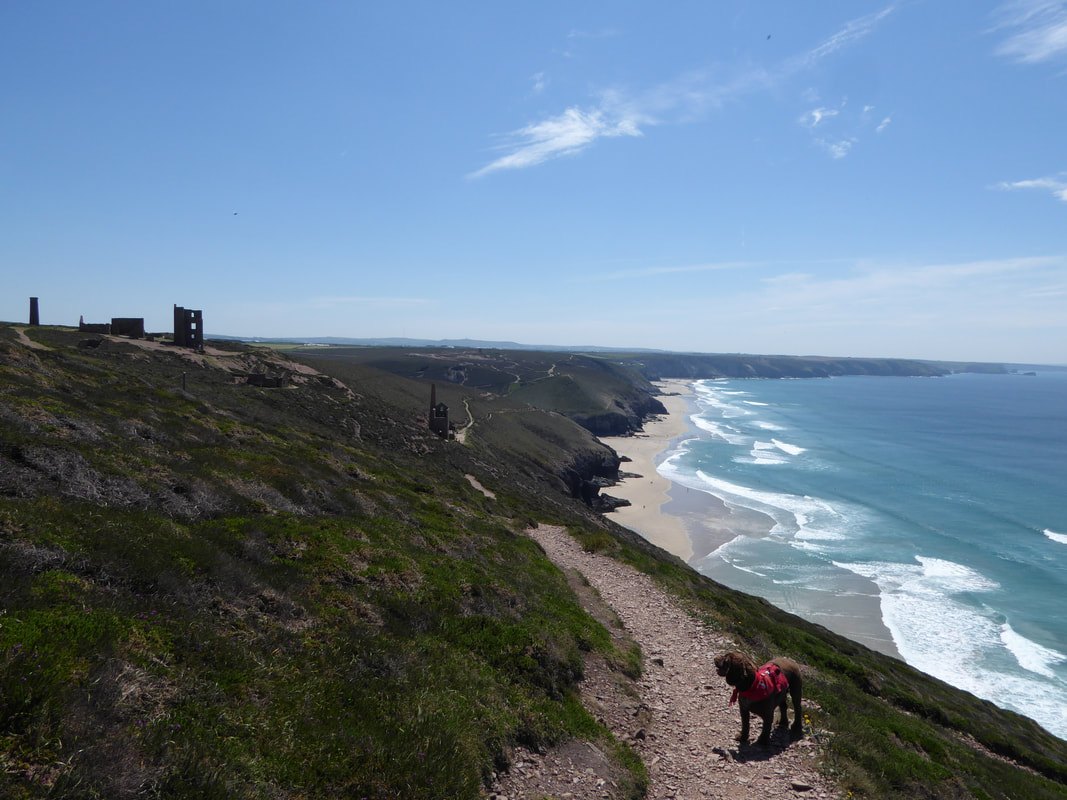 The former Tin Mine of Wheal Coates.
The mine opened in 1802 and was closed in 1889 when the price of tin fell. 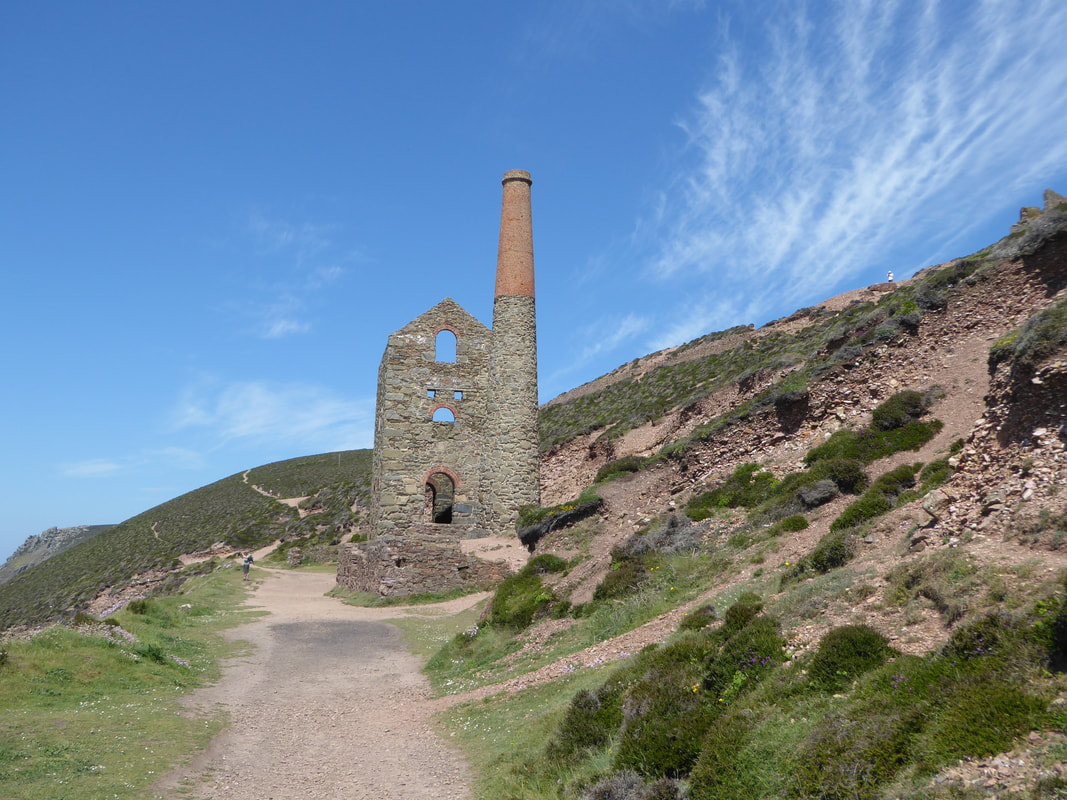 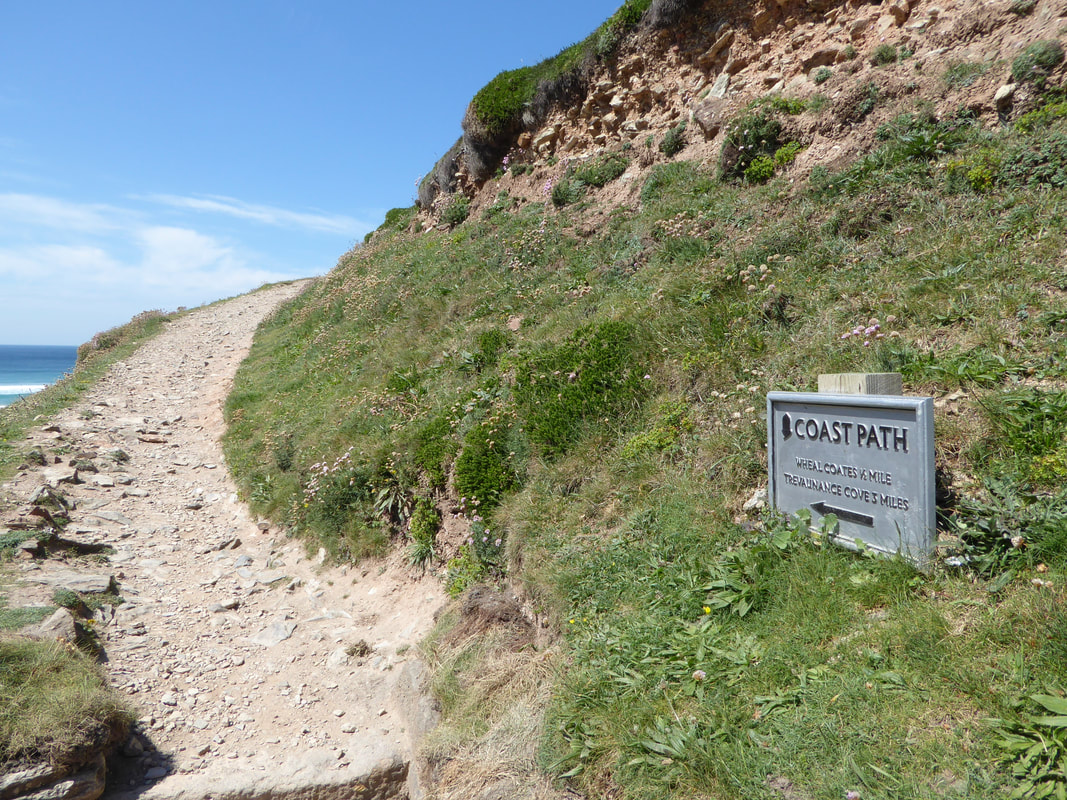 Felt good today as we ate up the miles 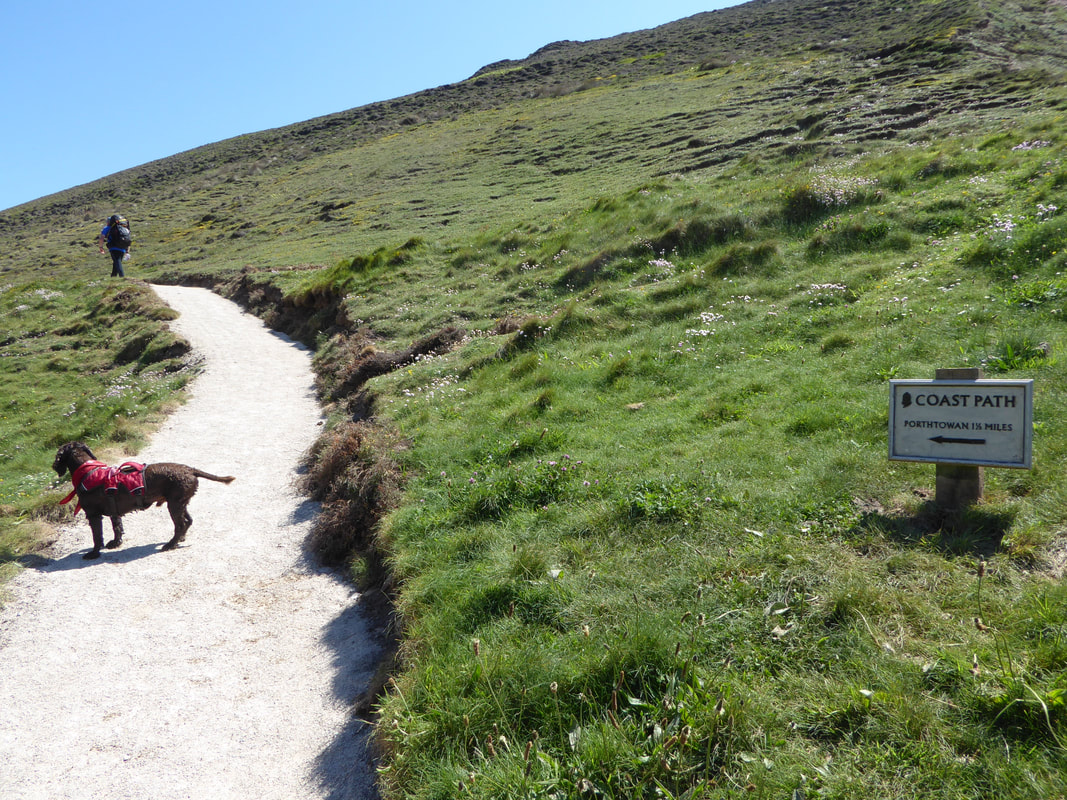 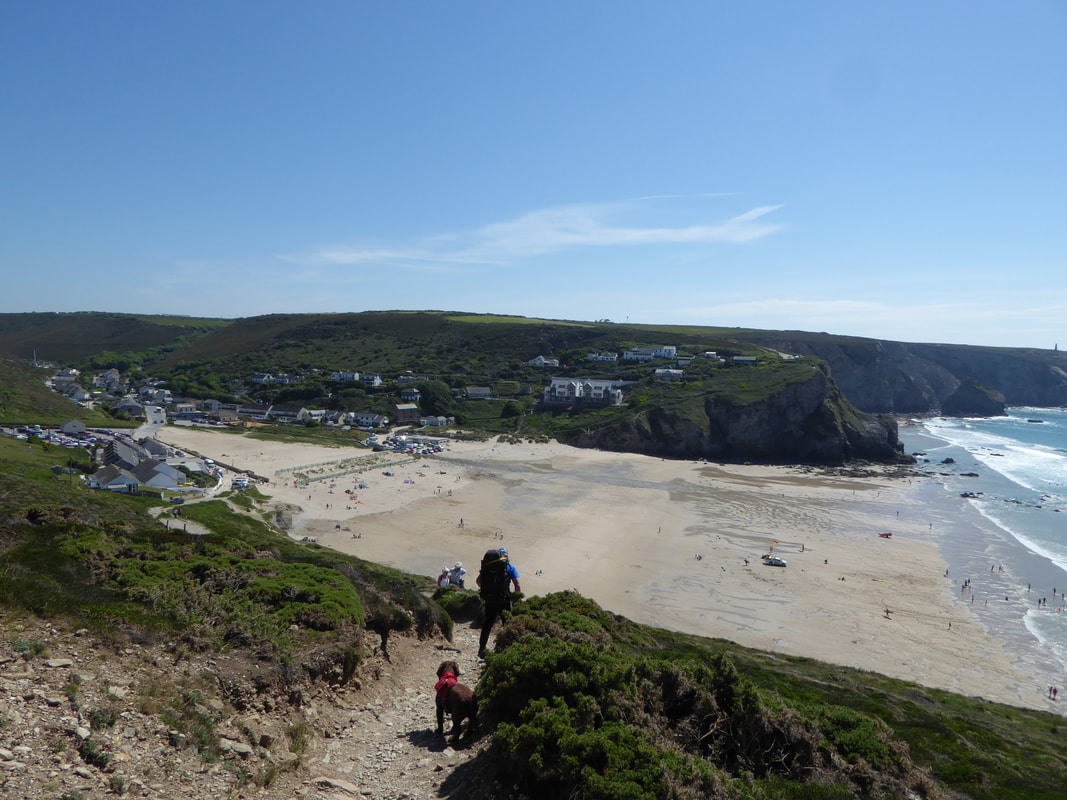 Porthtowan - Fudge still doesn't trust my Navigation
Another tough up & down as we near Portreath.
The area fenced off is Nancekuke Military Area - it houses a Remote Radar Head (RRH) 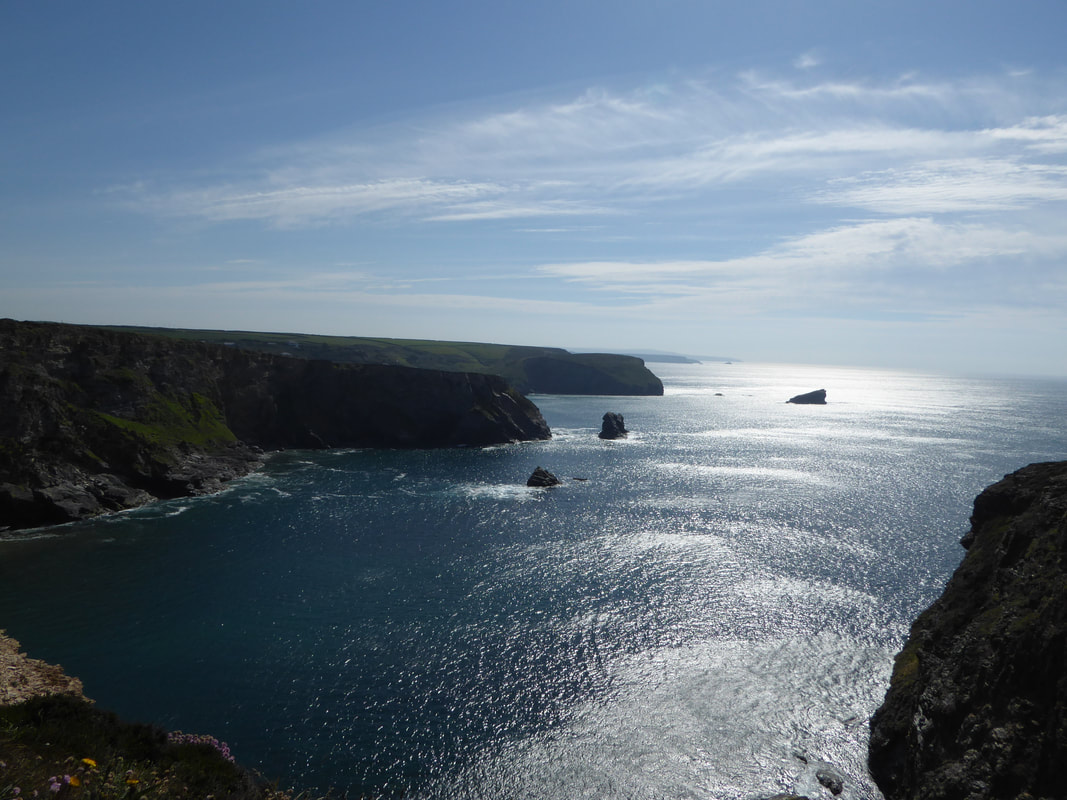 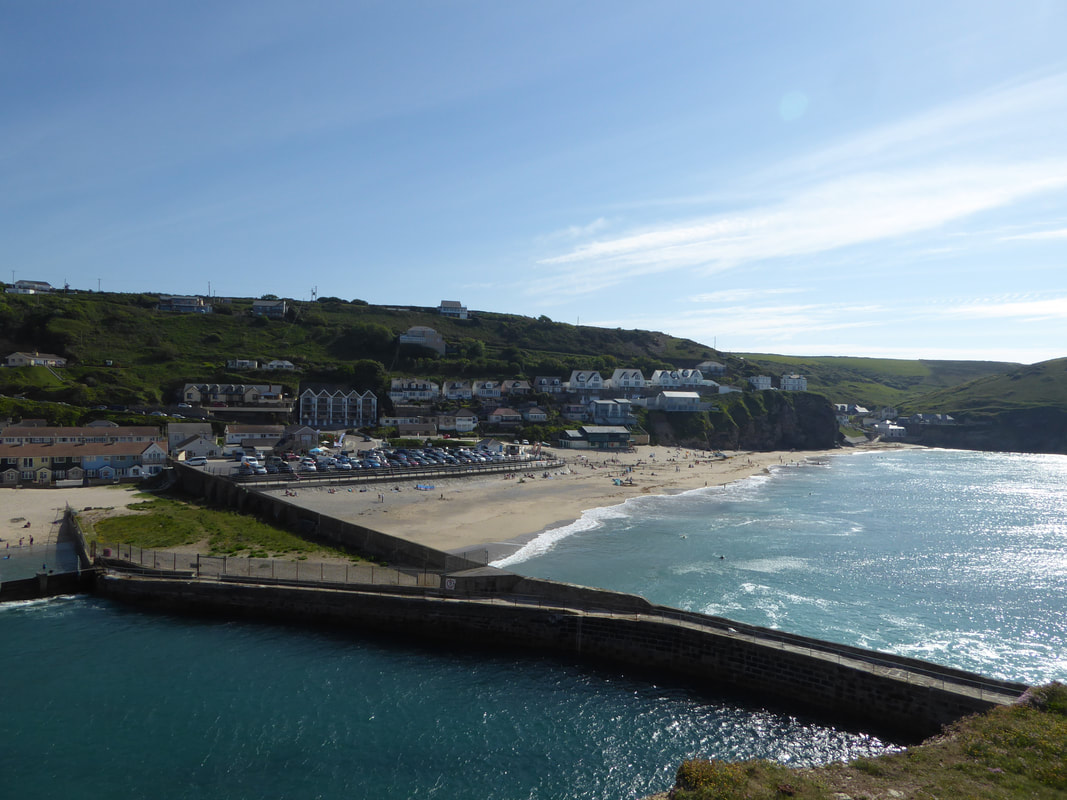 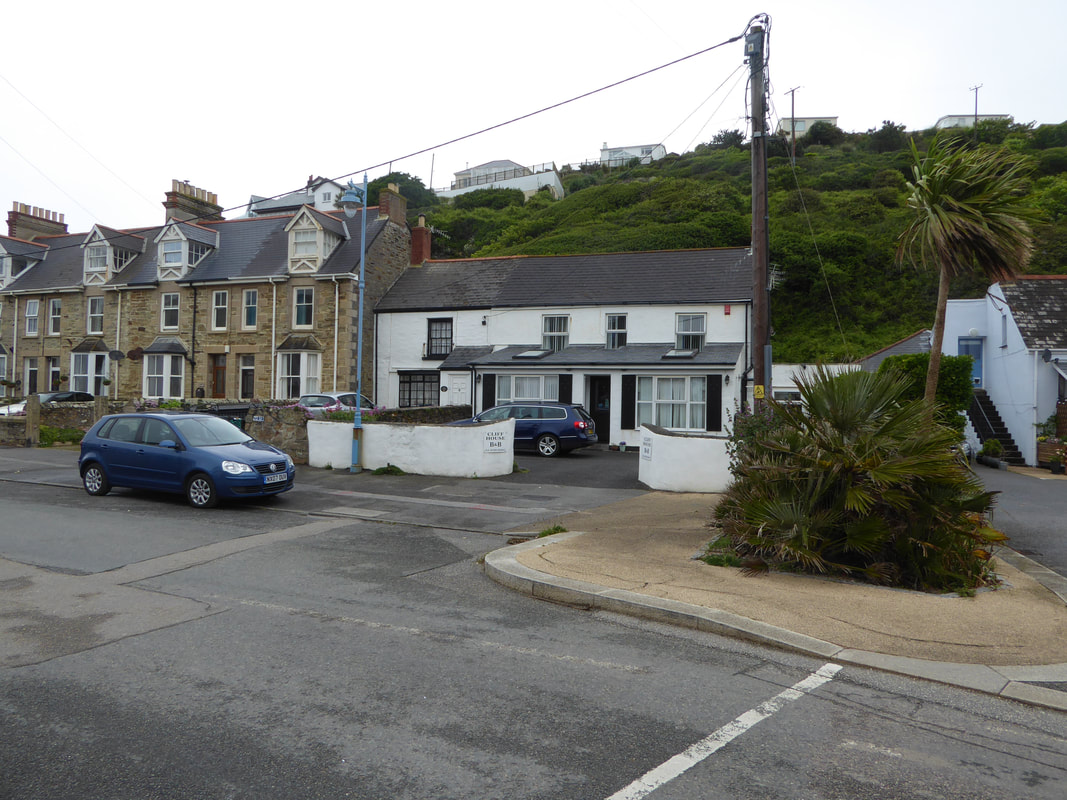