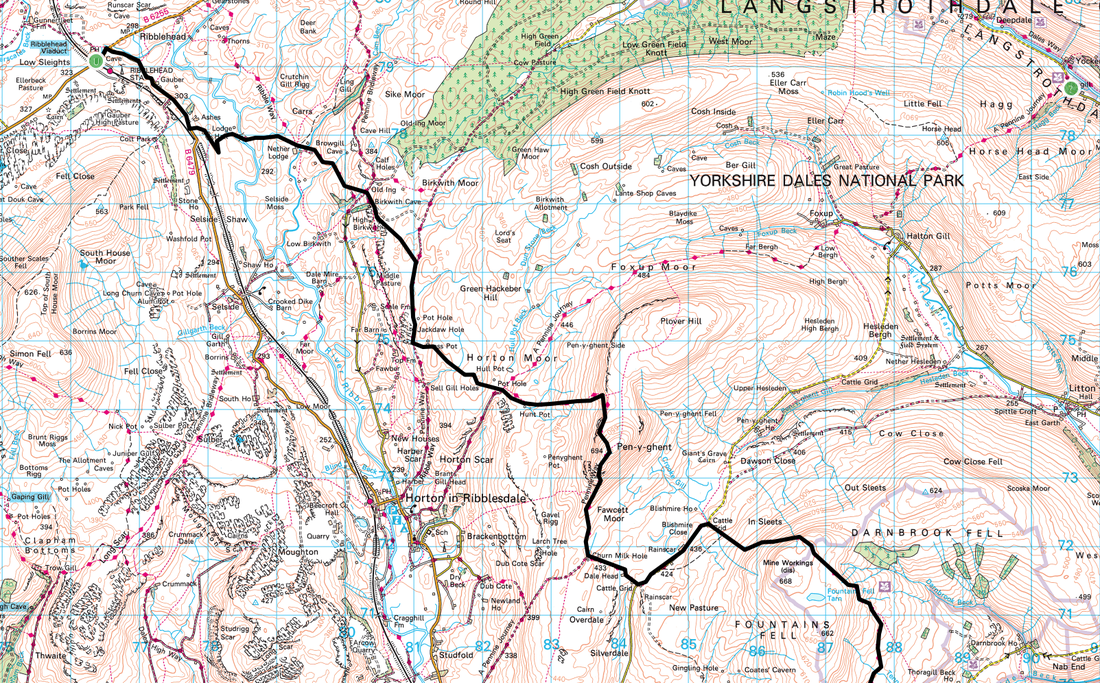 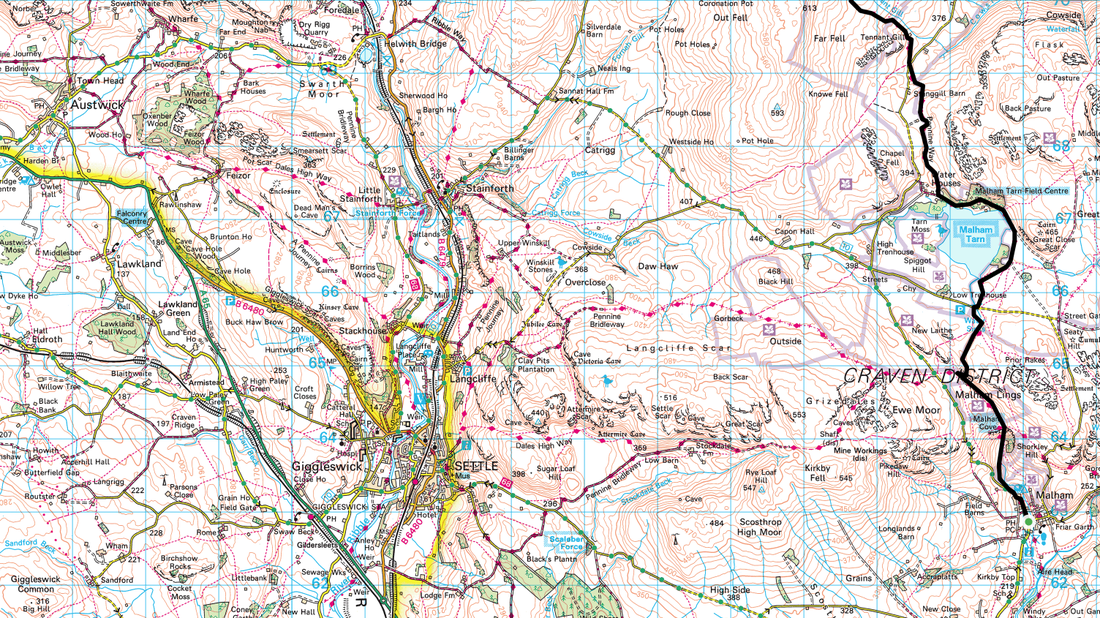 The day began with a rendition of Happy Birthday to Dave who was 21 (again!). After card opening and a hearty breakfast at Beck Hall we set off out of Malham at 0930. Today was going to be a long one - almost 20 miles with two steep climbs but through some wonderful countryside. No sunshine today unfortunately however despite being overcast for the majority of the day the temperature was really mild. 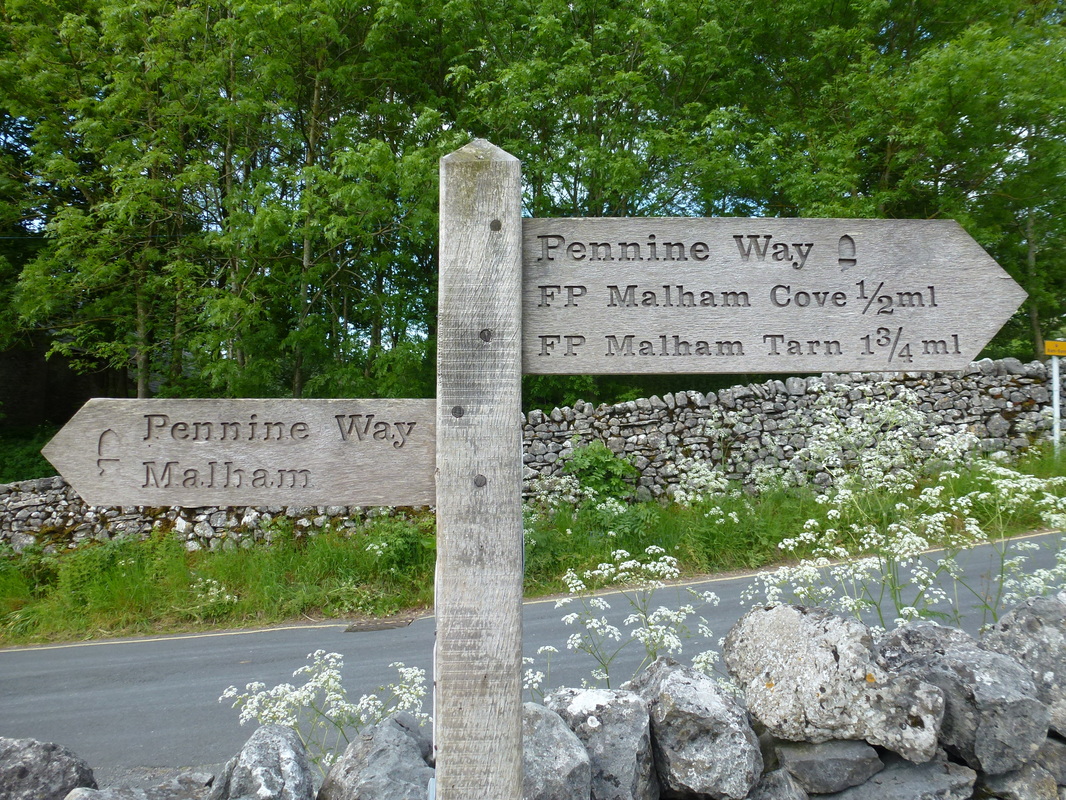 Ah well, here we go again
Roughly half a mile from the village of Malham is Malham Cove and the Pennine Way passes right over the top of it. The Cove is a limestone curved formation and was formed by a waterfall carrying meltwater from glaciers at the end of the last Ice Age more than 12000 years ago. Whilst we had been here before, the Cove is still a breathtaking sight and we had it to ourselves today. To reach the top of the Cove the Pennine Way heads up the left hand side and climbs 421 steps to reach the magnificent limestone pavement. Although we had a long way to go today we were reluctant to leave the pavement and explored the top in virtual solitude. There have been Peregrine Falcons here since 1993 and therefore some of the eastern side of the pavement is out of bounds in order to protect the birds and their nests. 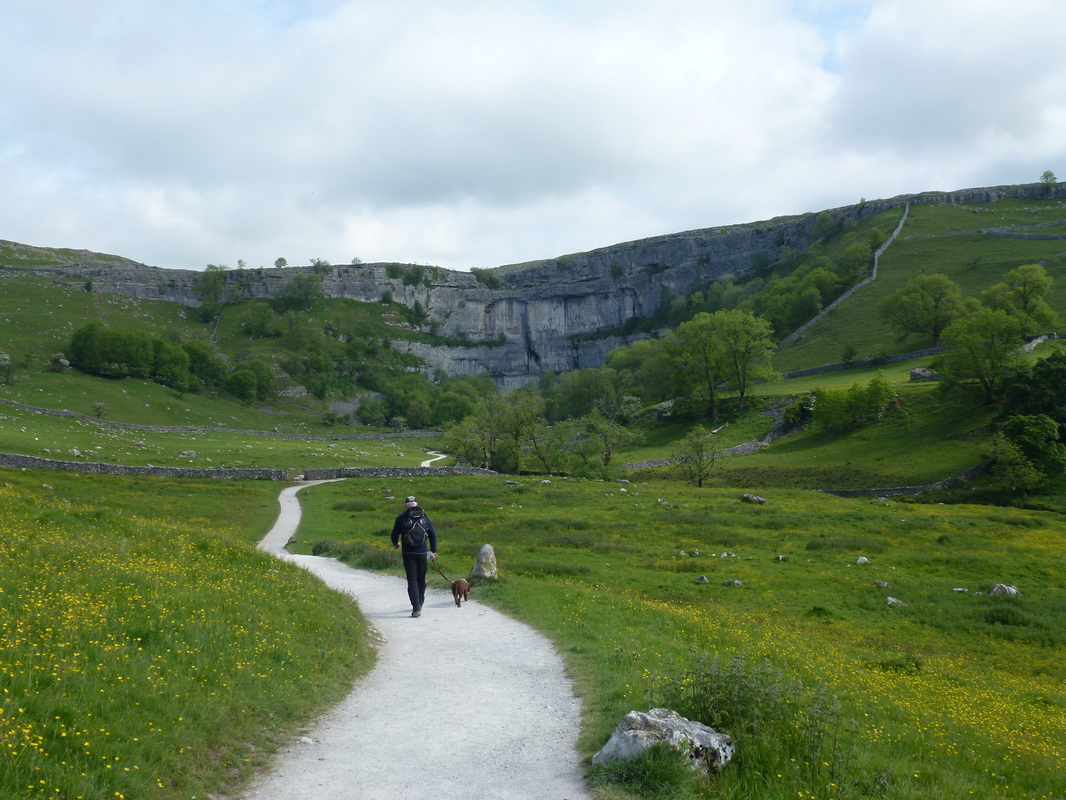 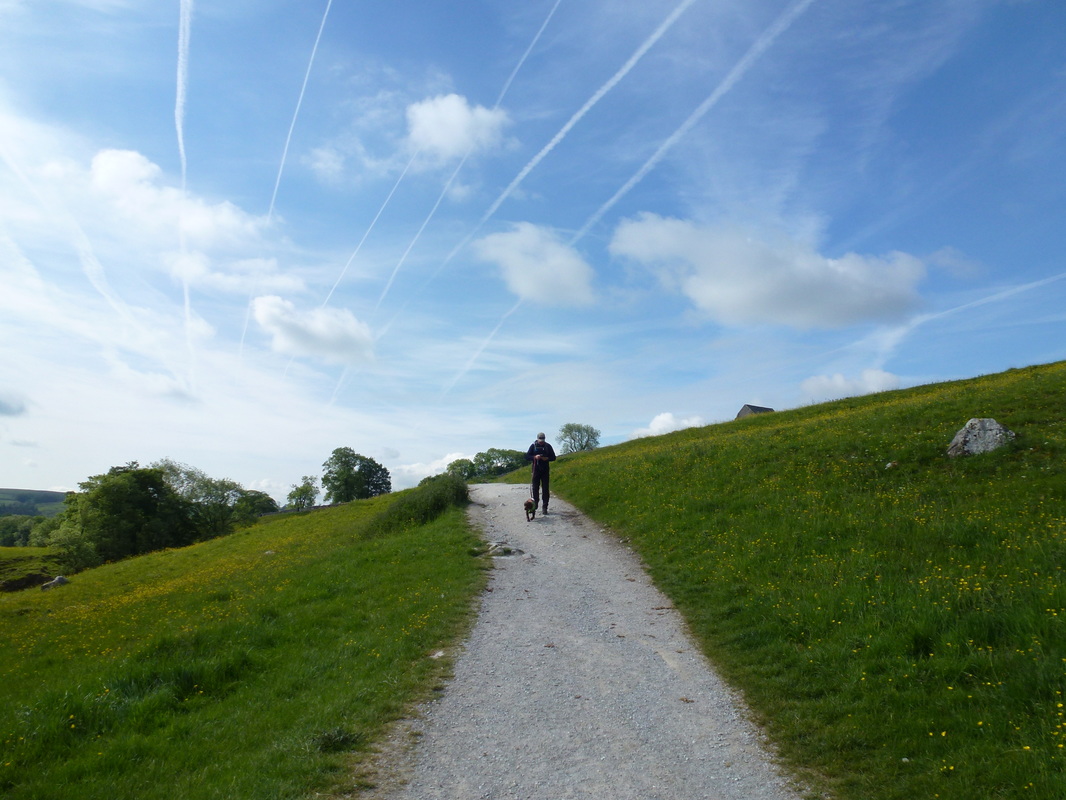 Lots going on up in the sky above Malham today 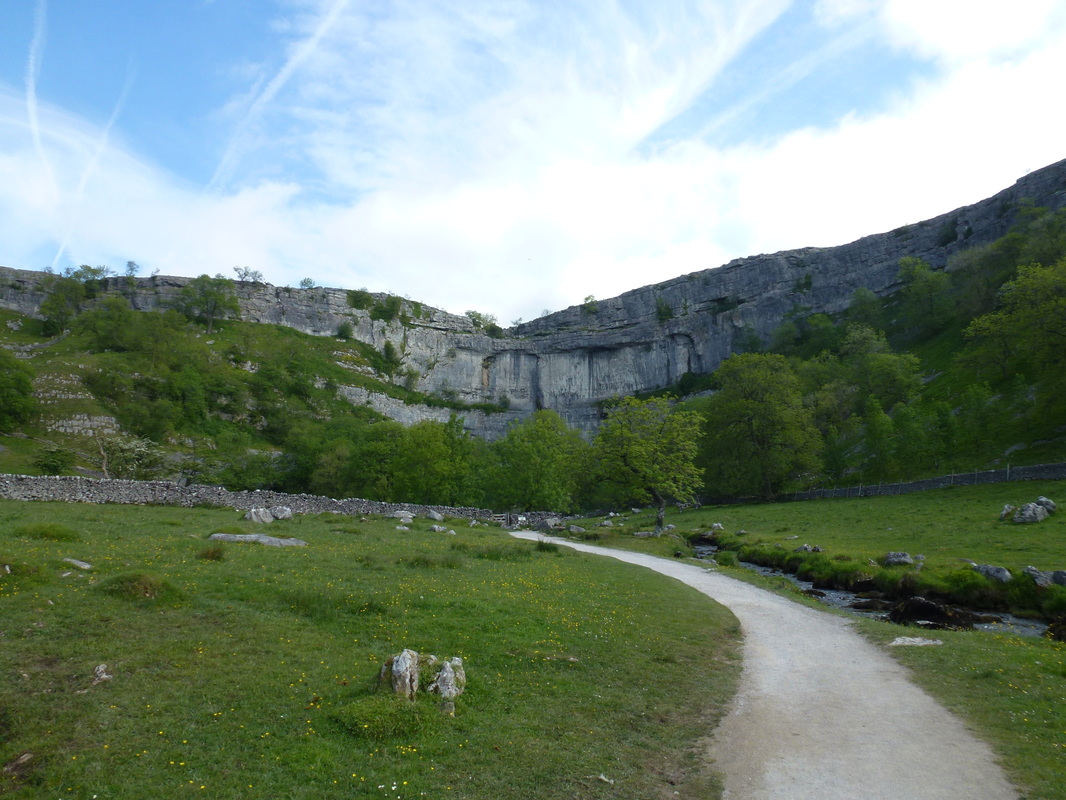 A close up of Malham Cove 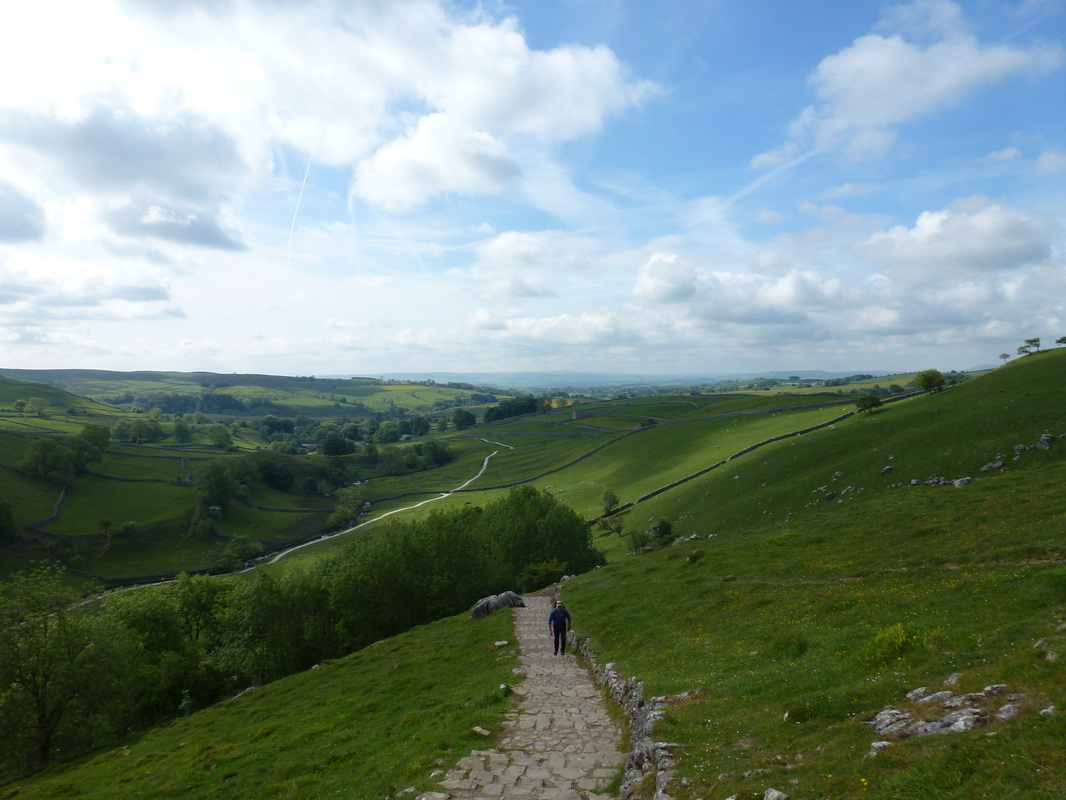 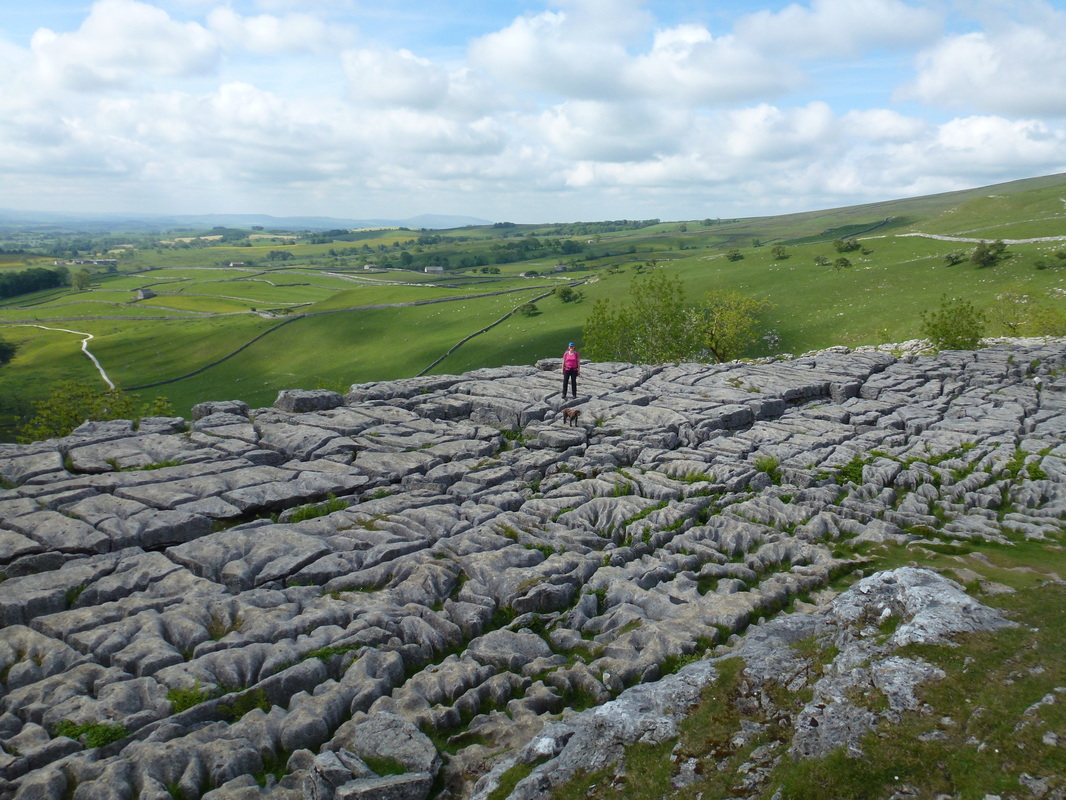 ... but worth it to see this beautiful limestone pavement
From Malham Cove the route then enters a deep limestone canyon that is known as the Dry Valley, or Watlowes Valley. This is a lovely walk which climbs gradually to give superb views back down the valley and towards Malham. Shortly after Watlowes the route continued across moorland to reach Malham Tarn which was paradise for Fudge - he didn't realise we had a walk to do today and had to be virtually dragged out of the water. The path then contoured along the right hand edge of the tarn before joining a good track through woodland passing the Study Centre at Malham Tarn House.​ 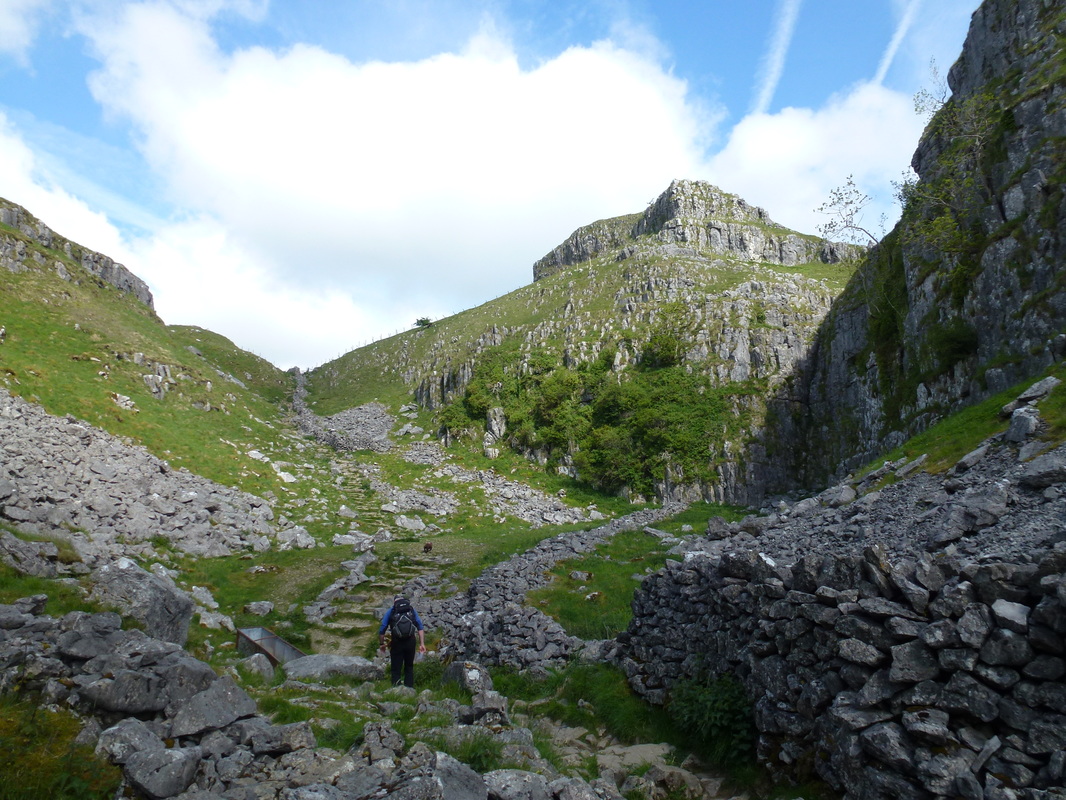 Heading through the dry valley known as Watlowes 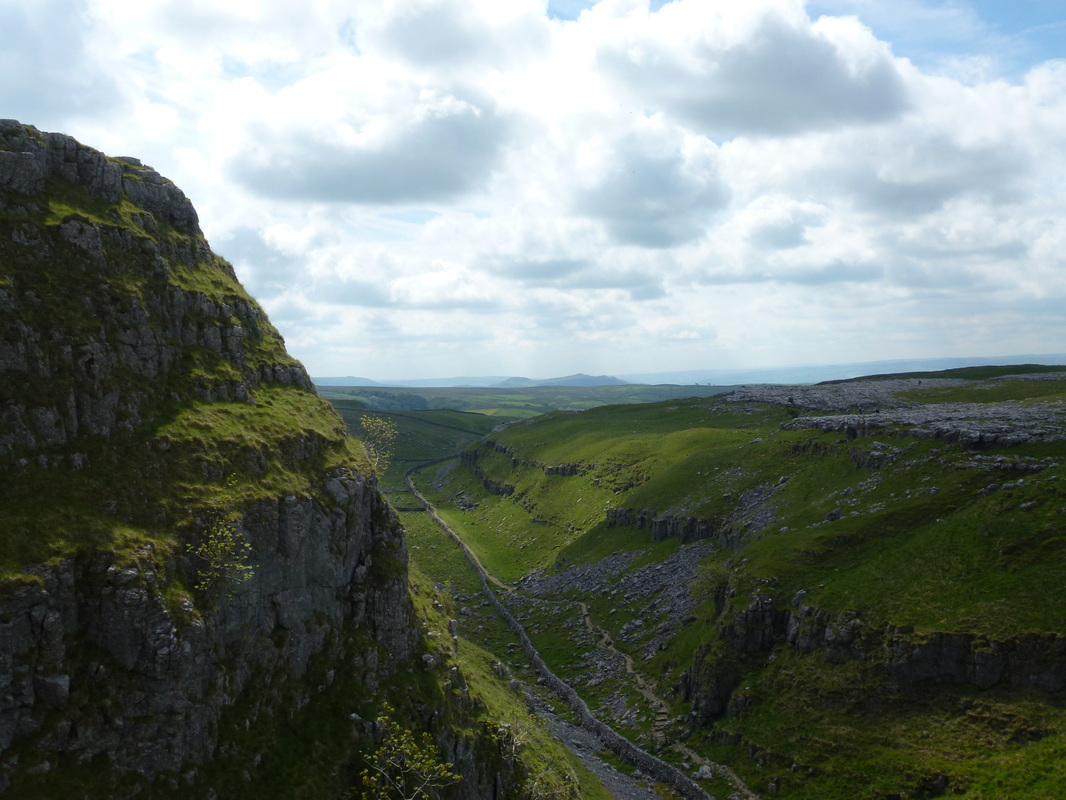 Up above Watlowes looking back to our route from Malham 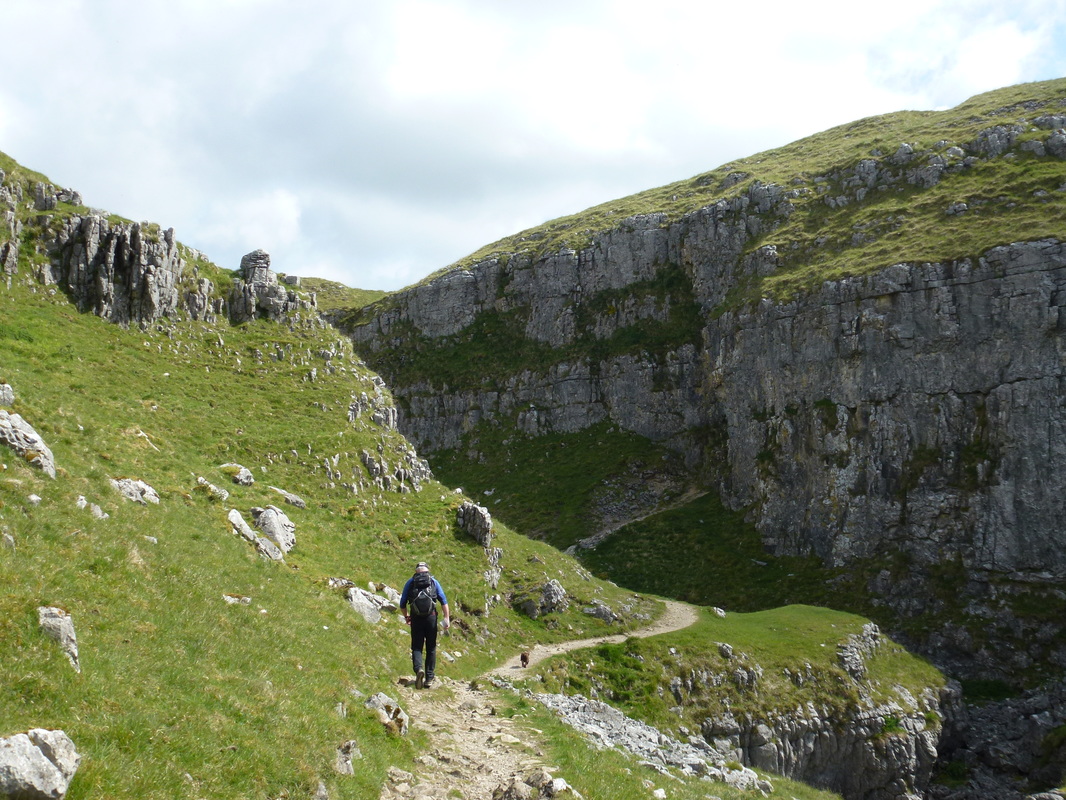 This was a lovely narrow & enclosed valley just after Watlowes 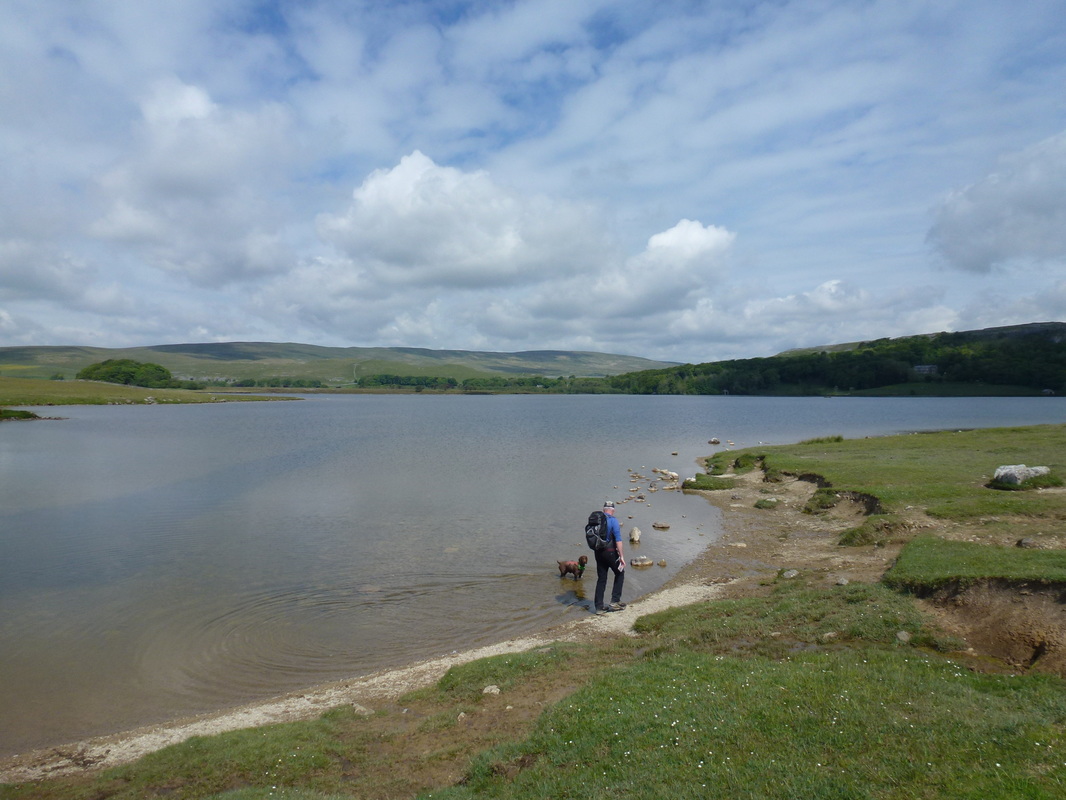 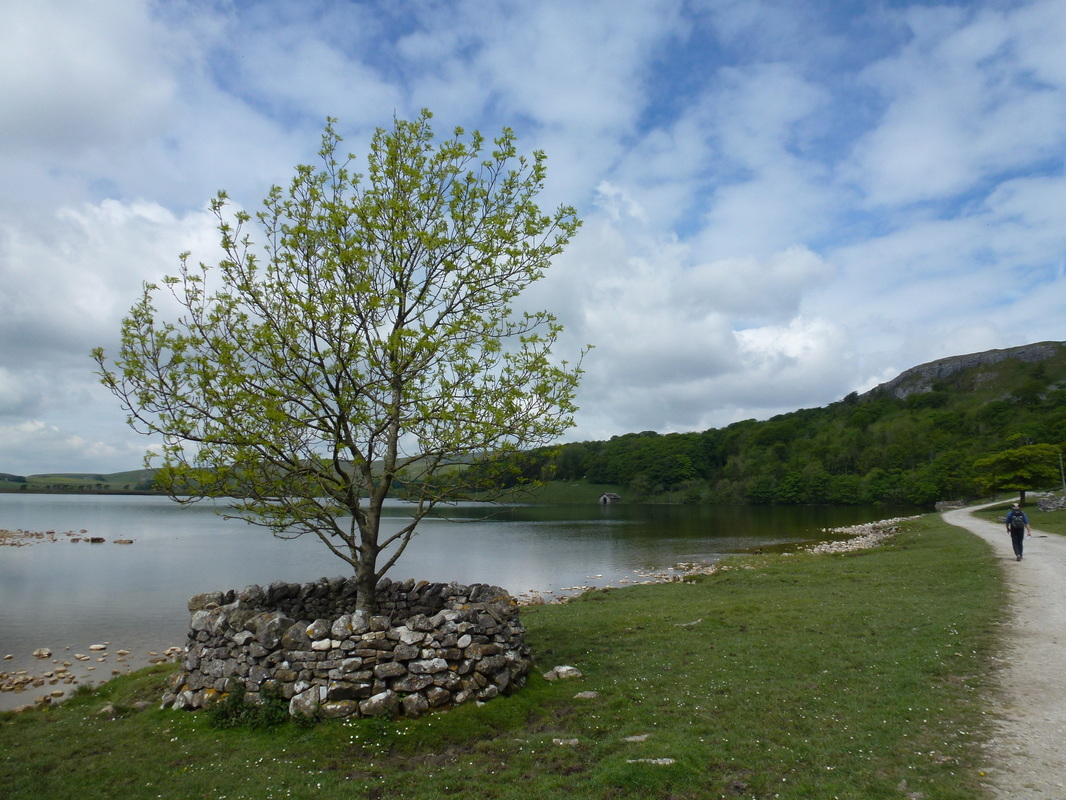 This was a lovely part of the walk heading along the edge of Malham Tarn
Leaving the track, our path headed to the right through fields giving us fine views of Limestone country. After an hour or so we reached the farm at Tennent Gill and from here we ascended steadily over the slopes of Fountains Fell, resisting the urge to bag this 2192ft English Nuttall. Shortly before reaching the twin cairns at 655 meters we had our first view of Pen y Ghent and after crossing the wall stile we dropped off steeply down a stony path into Silverdale to meet a wall which we followed to the road. There now began a lengthy walk along an unfenced road past Rainscar House Farm to a Car Park - we turned to the right here and walked past Dale House Farm before stopping for a welcome drink and snack. From our snack stop we could see the path ahead to the foot of Pen y Ghent and started out on our final climb of the day although we still had a long way to go before we reached the Station Inn at Ribblehead.​ 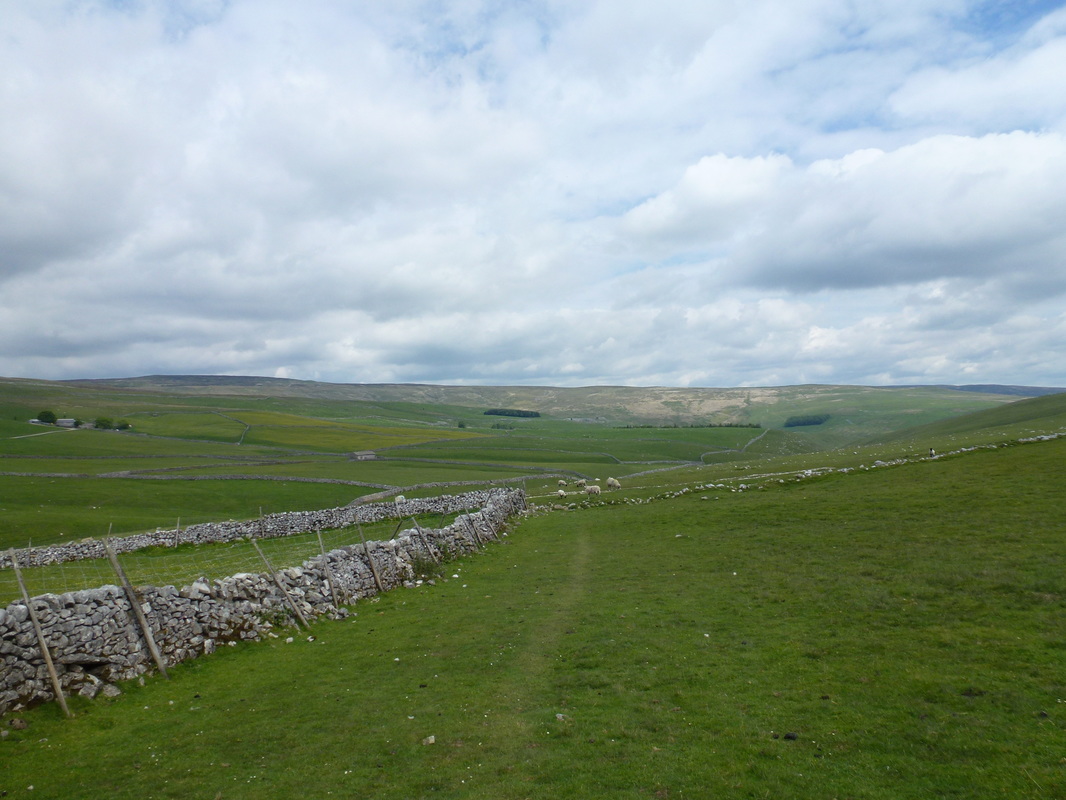 Leaving Malham Tarn the route heads out into open countryside 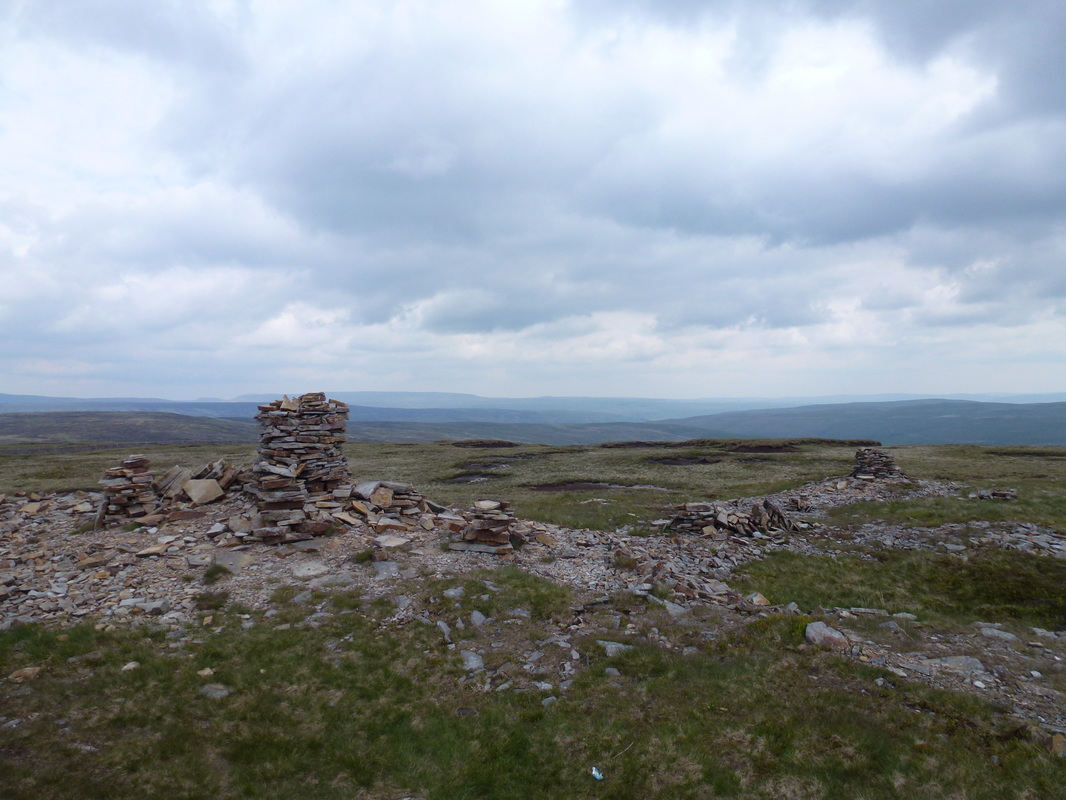 Up on Fountains Fell 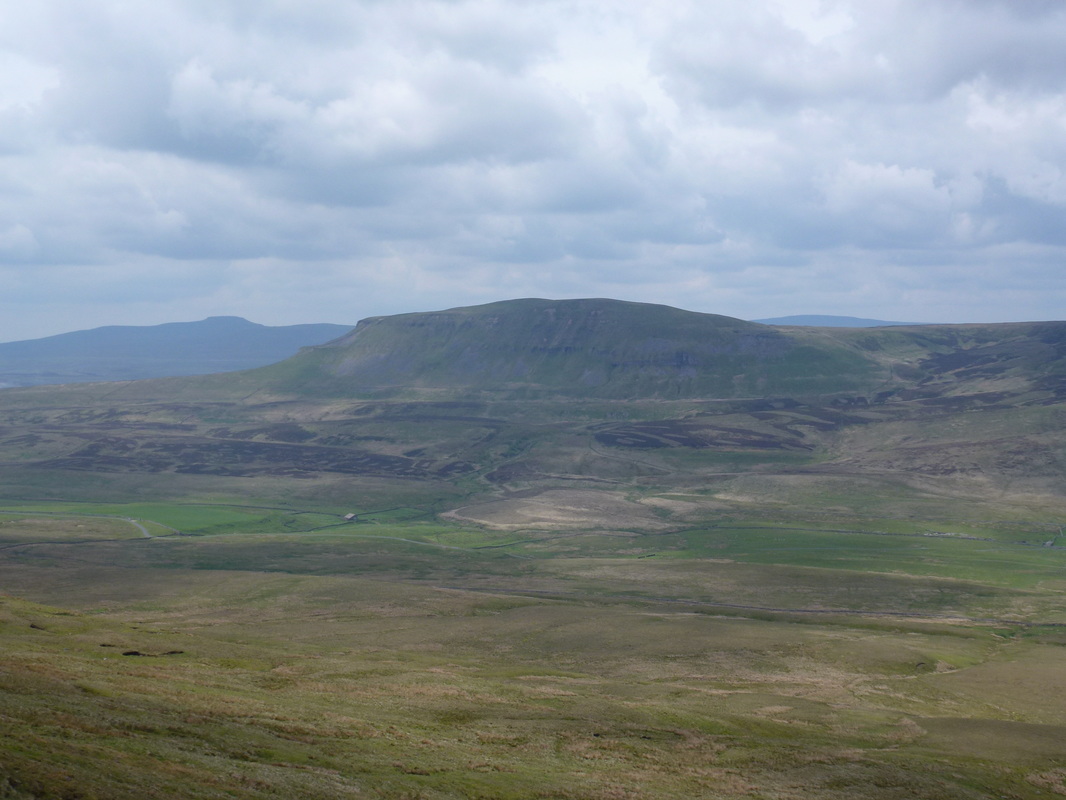 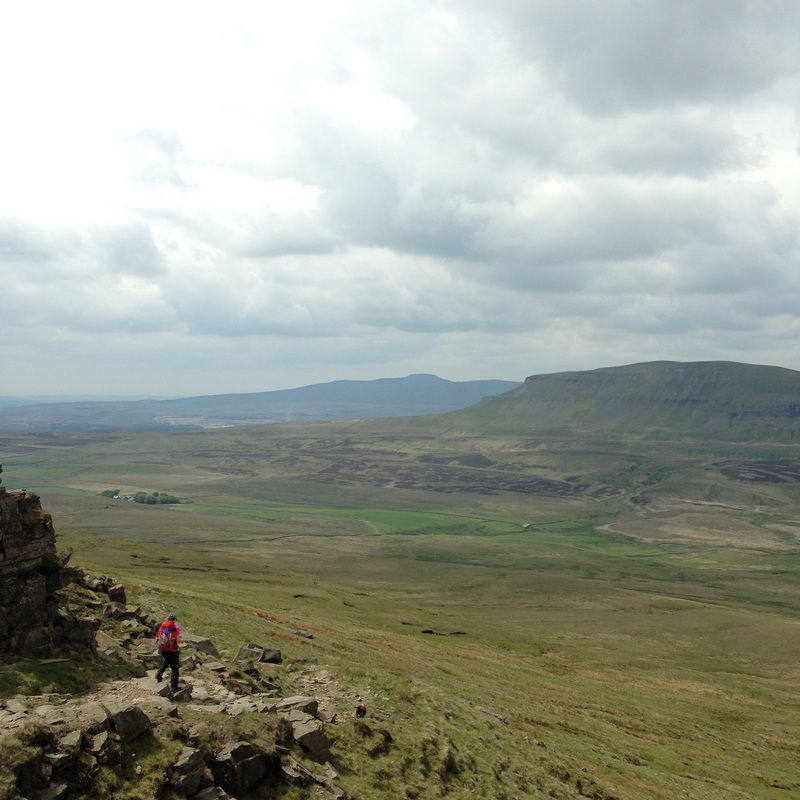 The stony descent from Fountains Fell
At the foot of Pen y Ghent the route joins that of the Yorkshire Three Peaks coming up from Horton in Ribblesdale. There is an option here to take this path direct to the village however as we were not staying there we headed up the imposing climb, one we had done before several times. It looks hard work from the bottom but the steepness was short lived and soon levelled out to reach a flagged section that took us to the summit. From the summit there are superb views over to Horton, Fountains Fell, Plover Hill and the route of ascent.​ 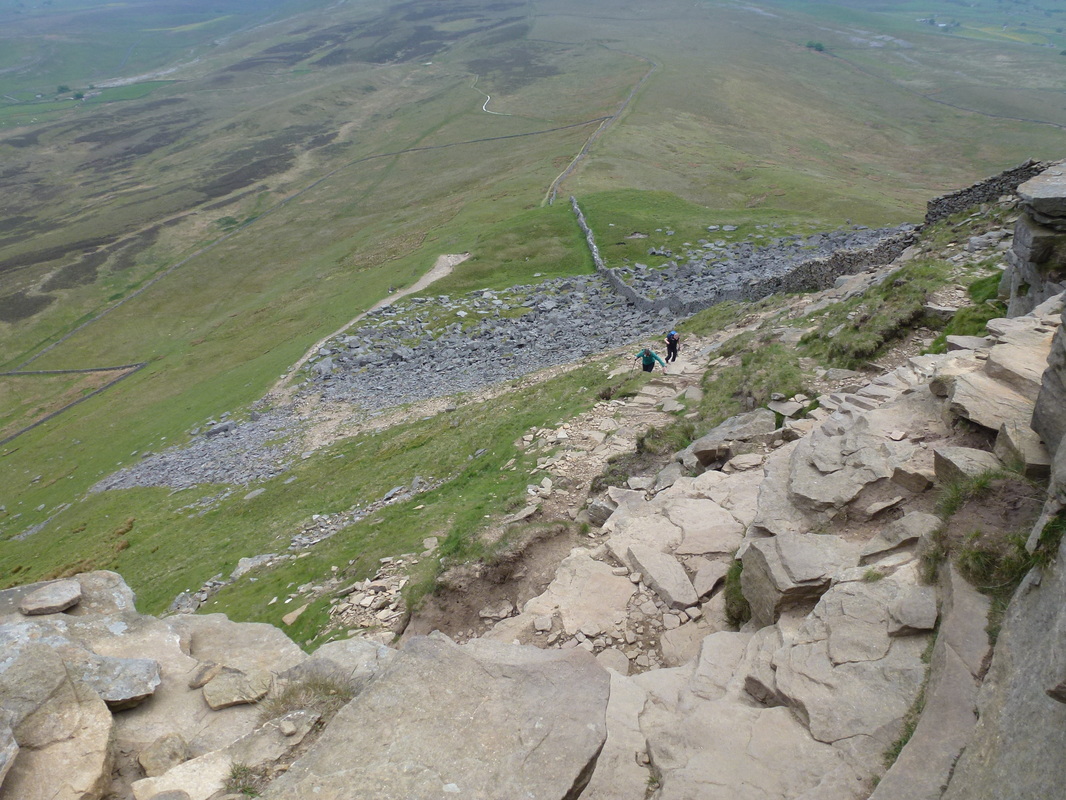 Looking back down our ascent of Pen y Ghent 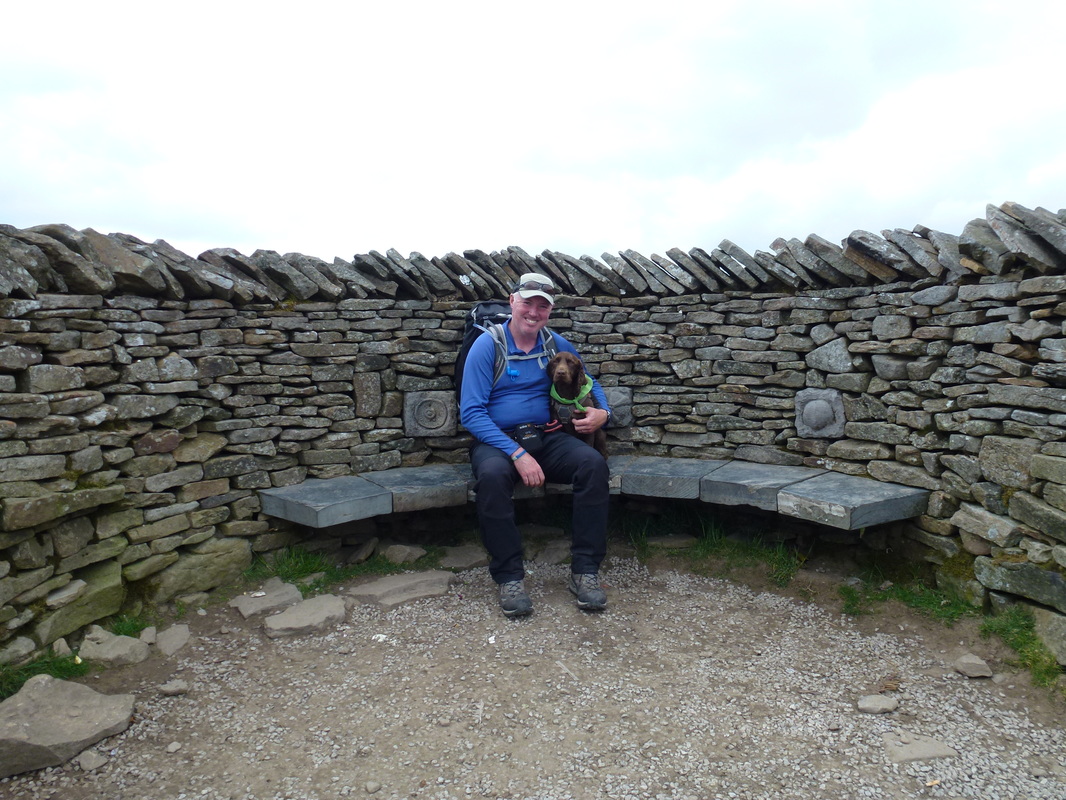 With my mate on Pen y Ghent's summit 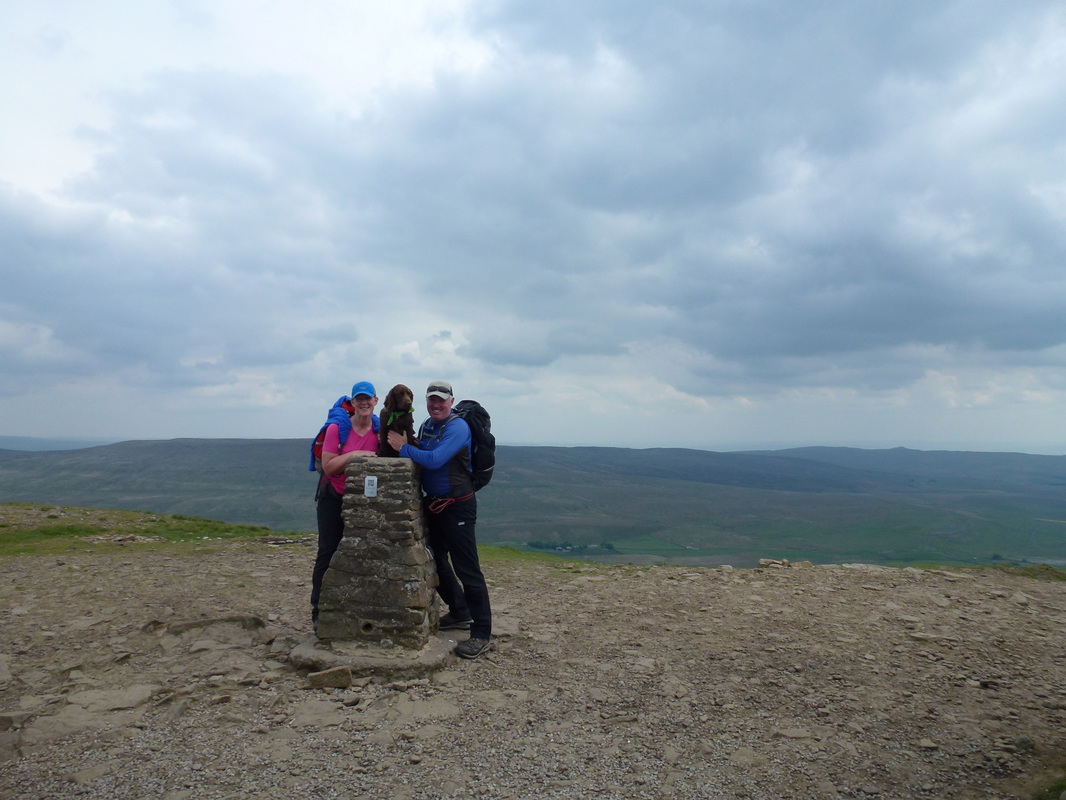 The 3 Amigos on the summit of Pen y Ghent - we had already travelled a fair old way and still had a long way to go
Crossing the wall at the top, the route then dropped gradually and turned sharply left to descend steeply on a broad, stony path. Arriving at the junction of paths near Hull Pot it was time to leave the Pennine Way and follow the 3 Peaks path to Ribblehead. It was 1600 and we still had a couple of hours walking ahead of us but no matter - what else had we to do that day? The route now headed up Whitber Hill and on to pass Jackdaw Hill before we rejoined the Pennine Way for a short time as it came out of Horton in Ribblesdale – we would not rejoin the route again proper until Cam End tomorrow. The remainder of the walk was uneventful apart form a couple of out of control farm dogs at Lodge Hall Farm and we emerged unscathed to reach the Gauber Road and the mile or so to Ribblehead. 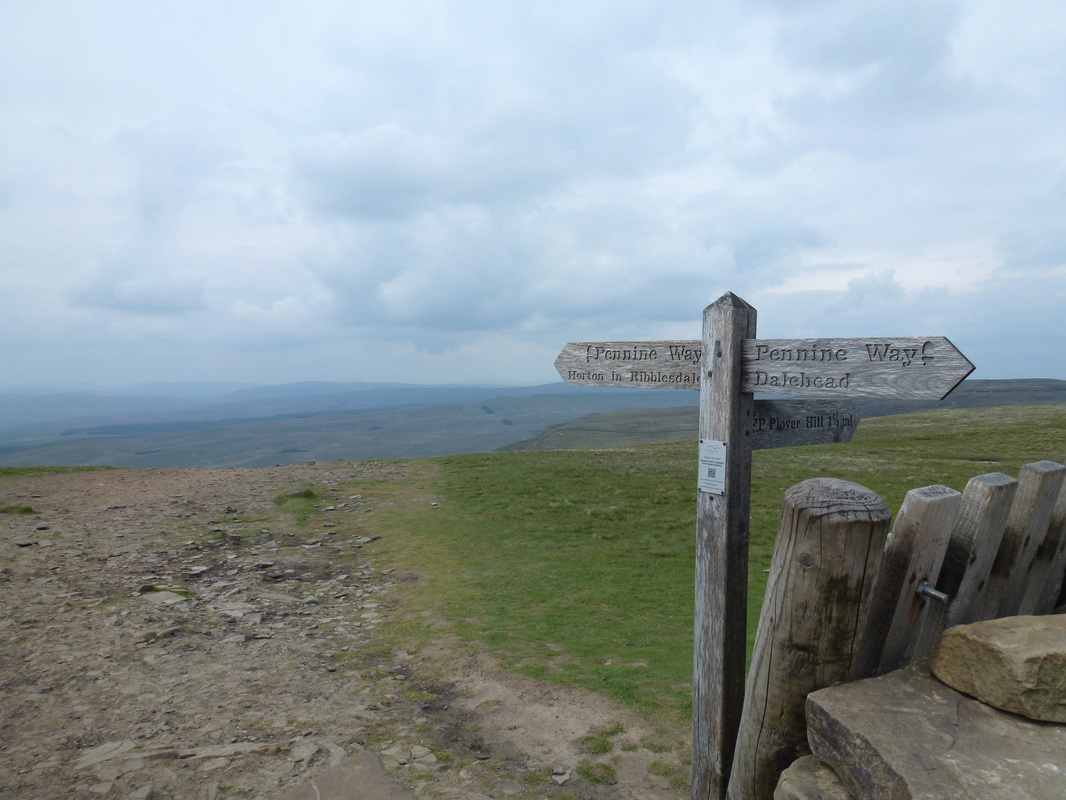 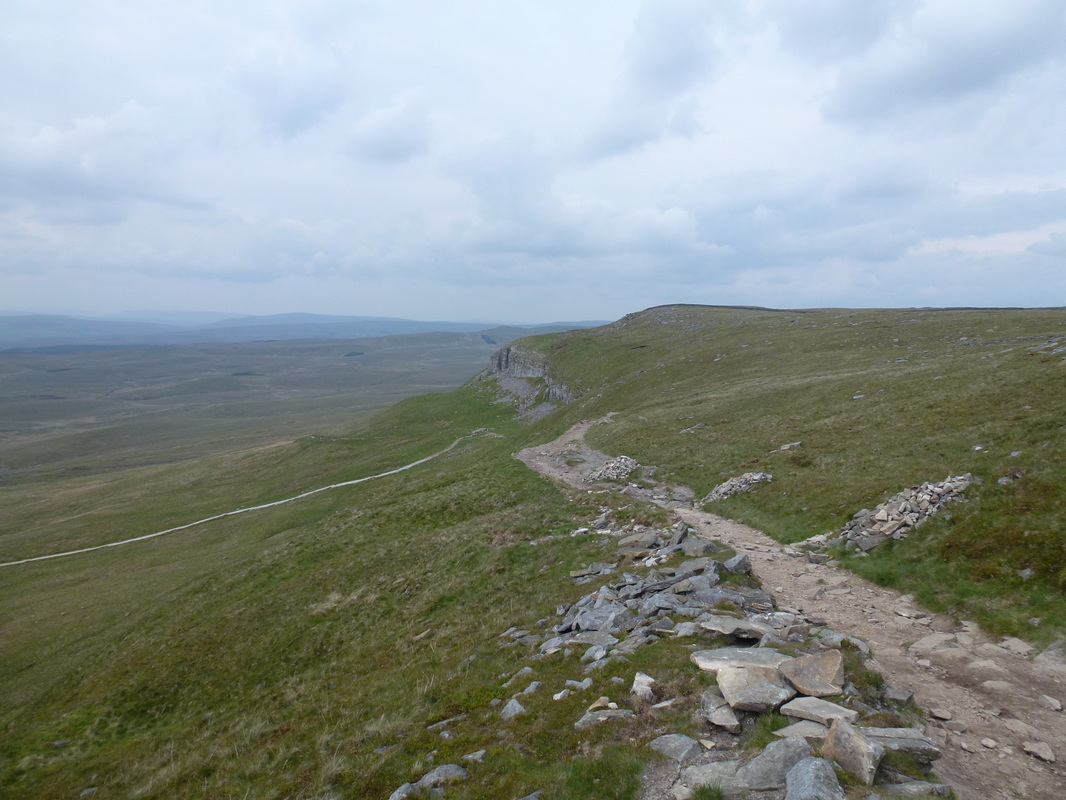 The path descends gently then hangs a sharp left 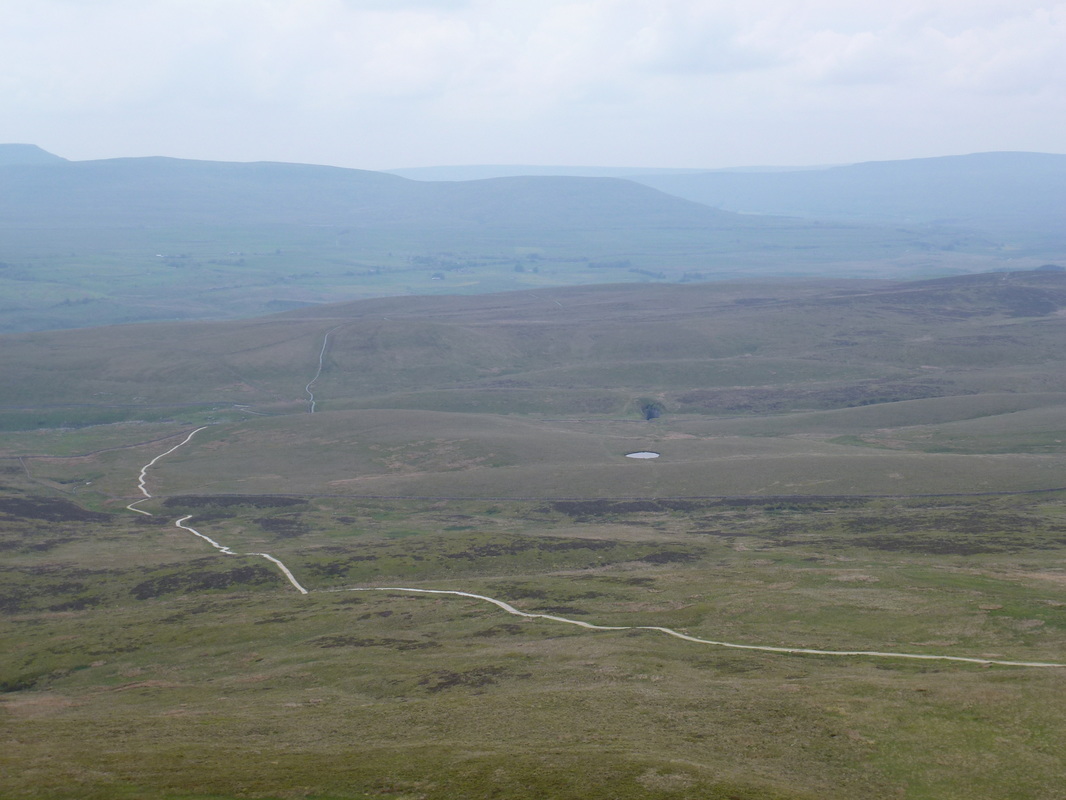 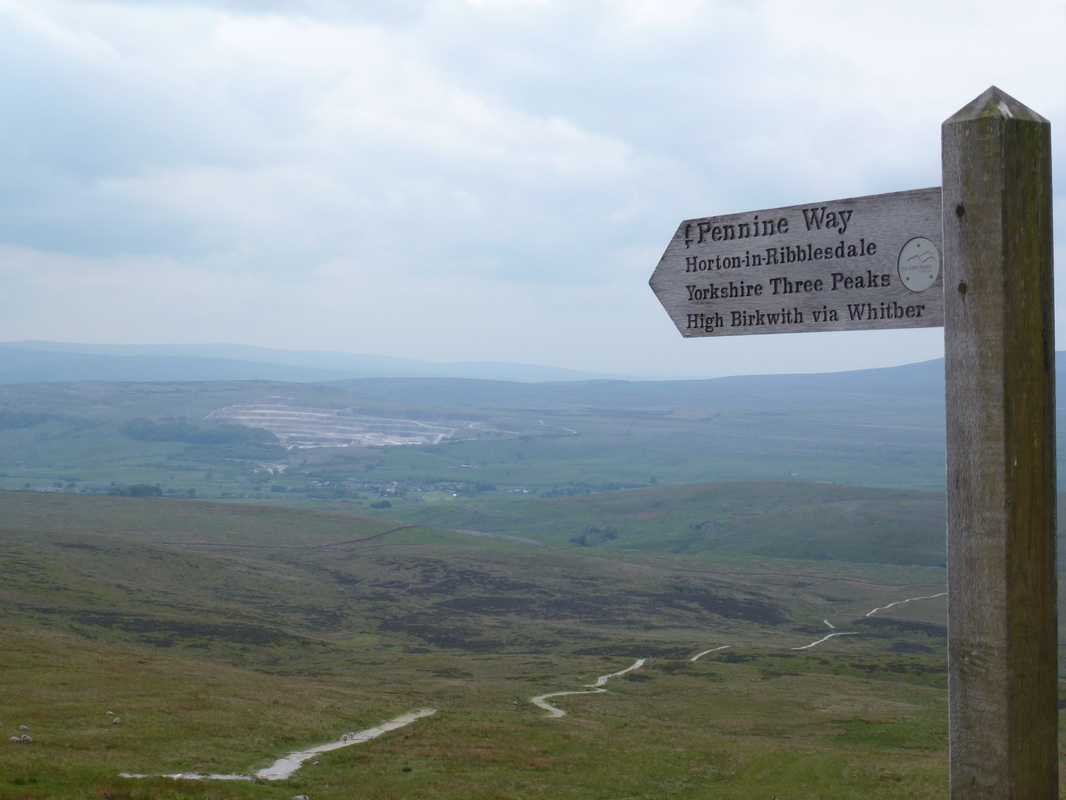 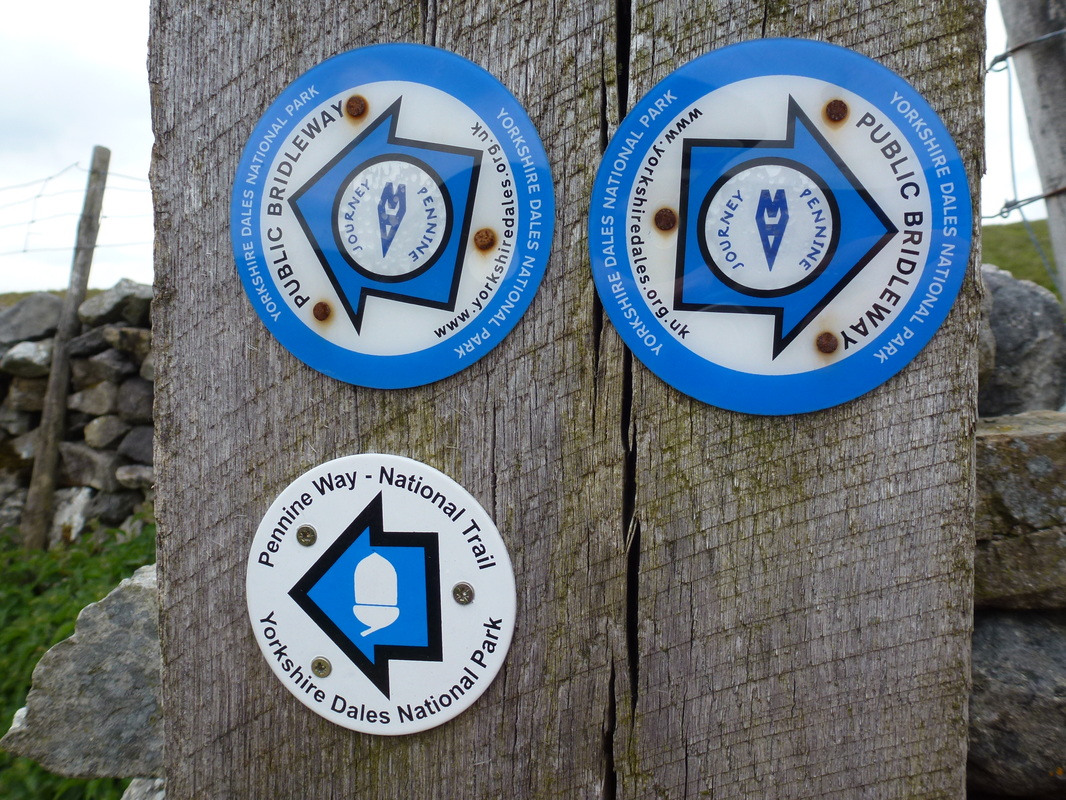 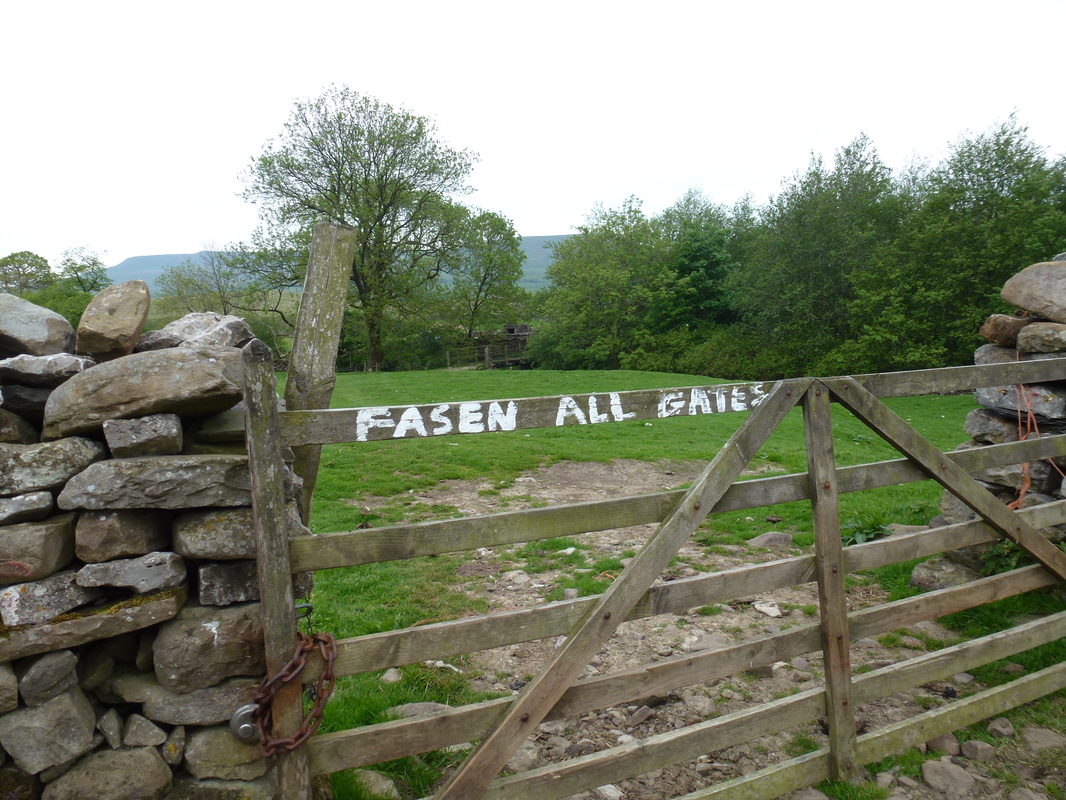 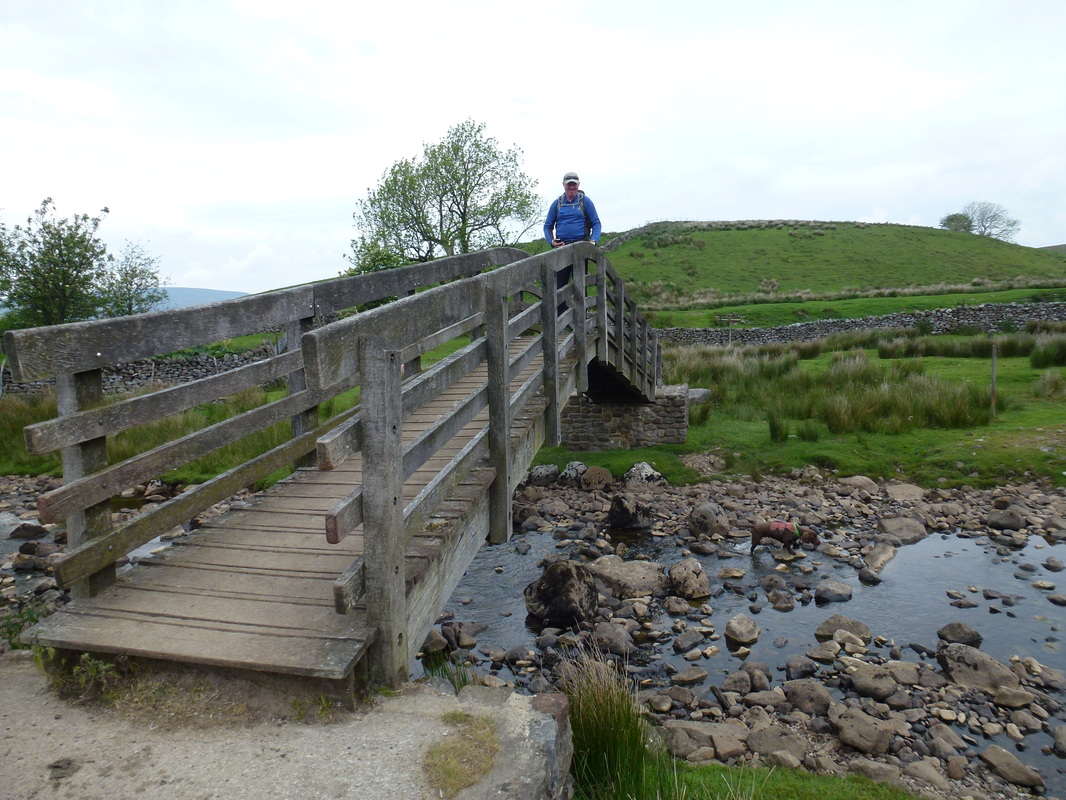 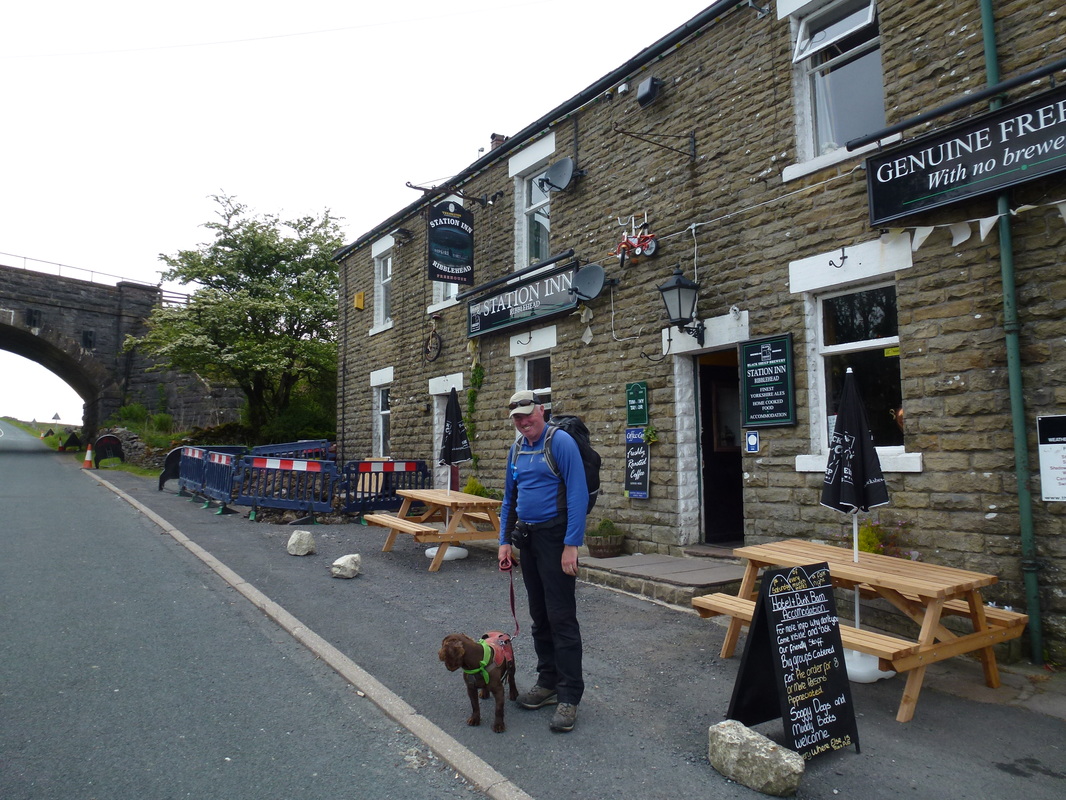 That was a long 19.3 miles - time for a beer.  Fudge takes the opportunity to practice his Green Cross Code.
There was only one thing to do now and that was to check in, shower and get down to the bar and have a nice meal and that is exactly what we did. The waitress in the Station Inn even put a birthday candle in Dave's Sticky Toffee Pudding! Despite walking for over 8 and a half hours this was an absolutely cracking leg of the route.​​
Overnight Accommodation 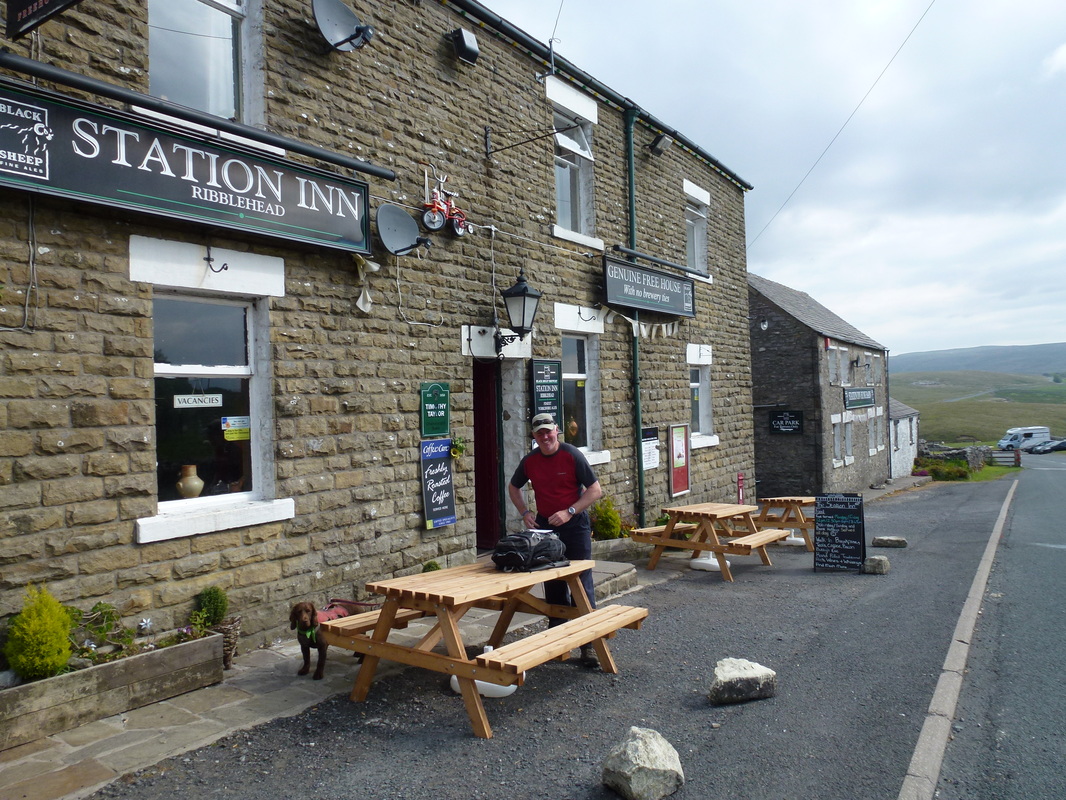 No frills with excellent food. If you want The Ritz this is not for you. Friendly staff and a comfortable room with a superb view of the Viaduct.​
Day 7 Data