Good paths throughout. The terrain from Yaverland to Yarbridge had some boggy sections. 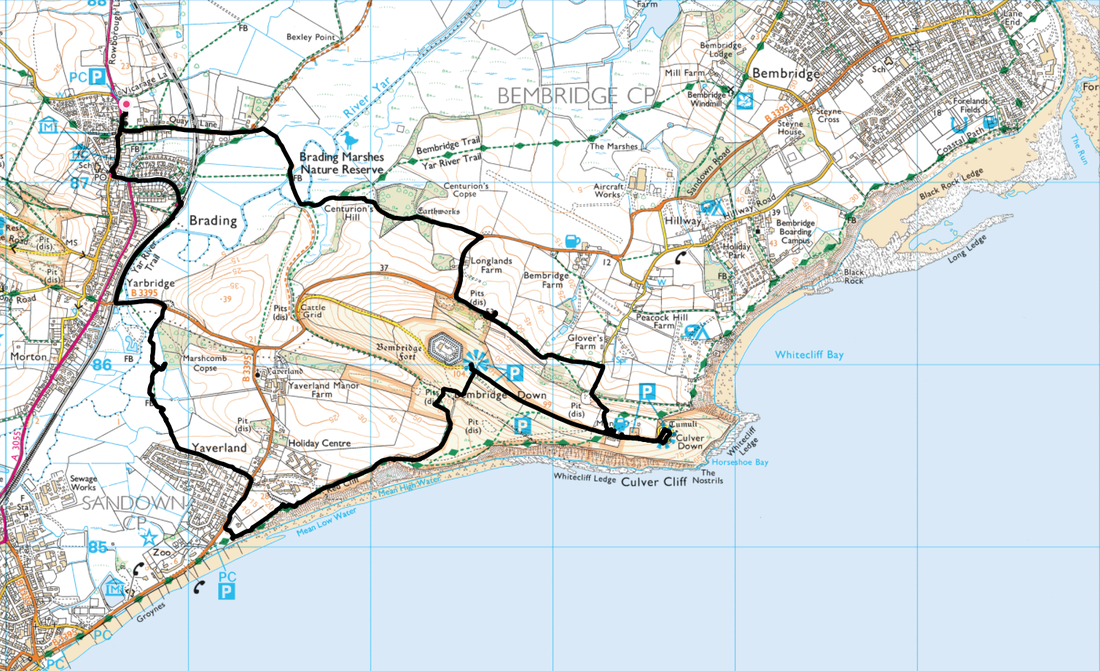 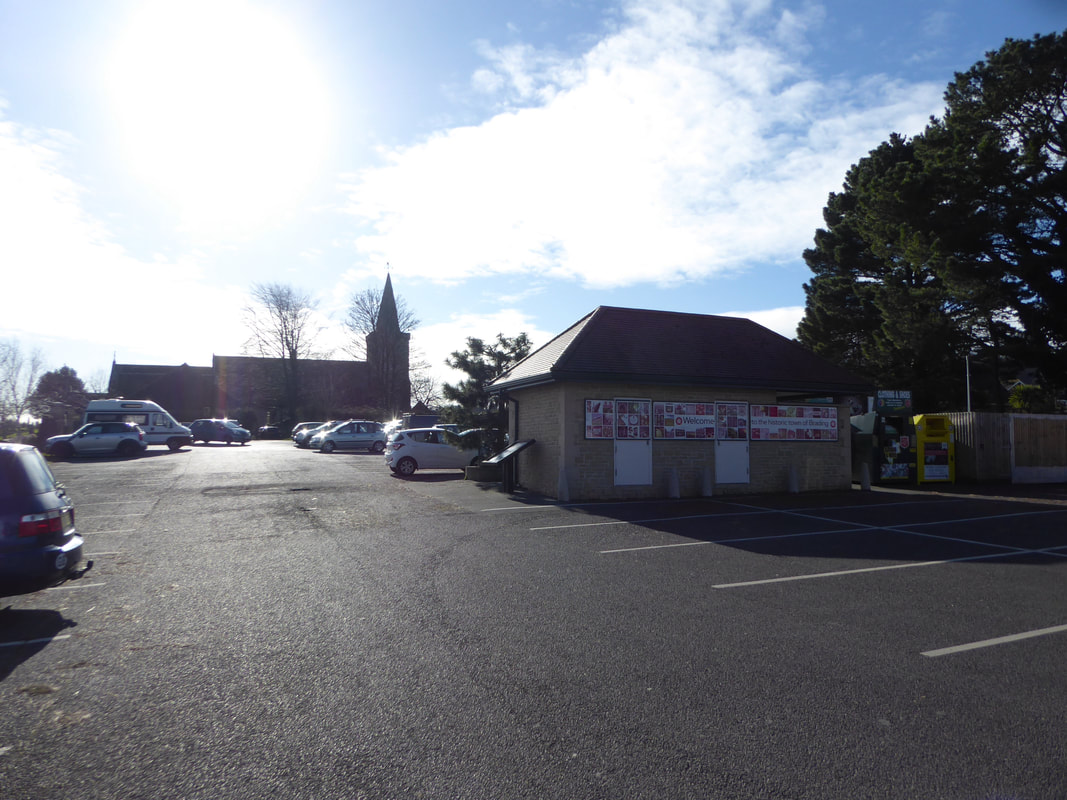 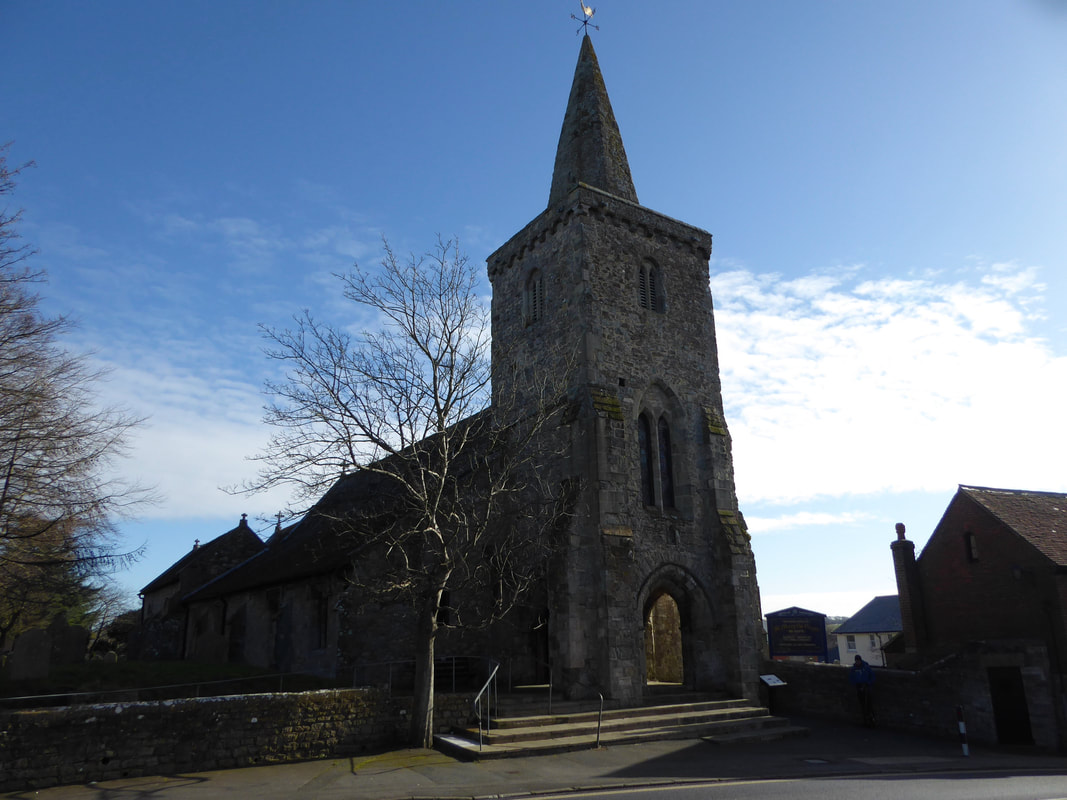 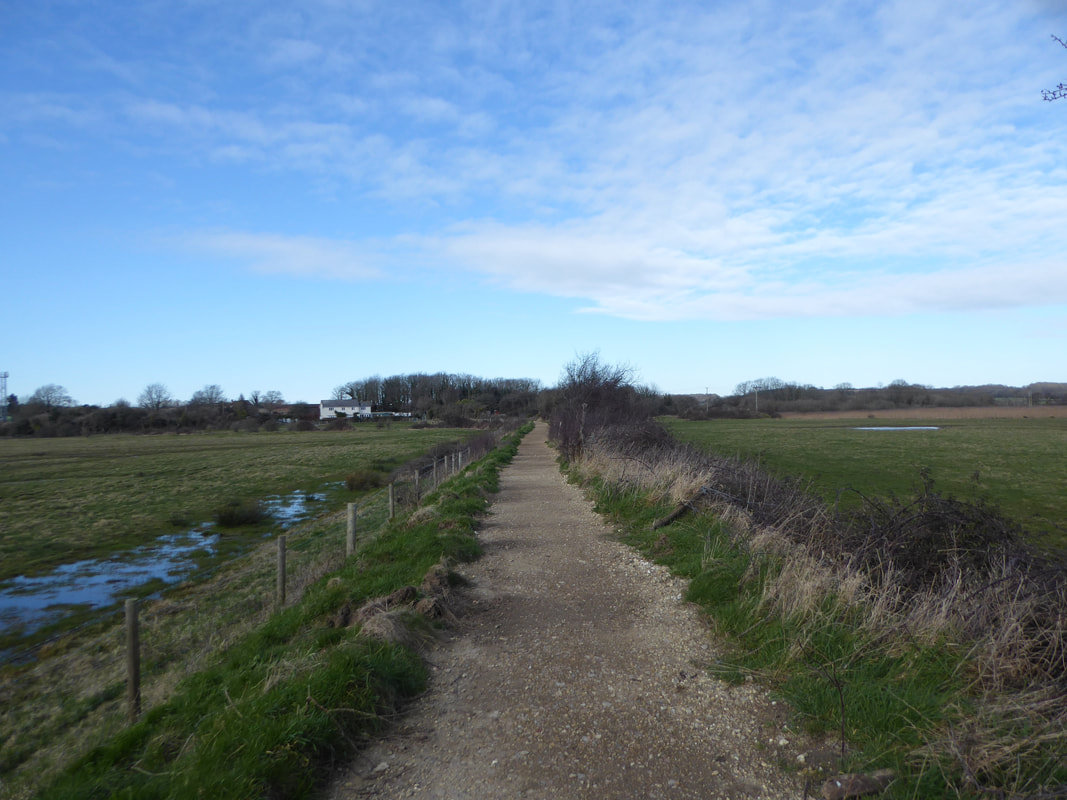 The route heads east along Quay Lane to then join a rough path between fields through Brading Marshes.
The Nature Reserve is the only Royal Society for the Protection of Birds reserve on the Isle of Wight.  It was acquired in 2001 and is a mix of lagoons and ditches, reed beds and meadows, with a fringe of ancient woodland. 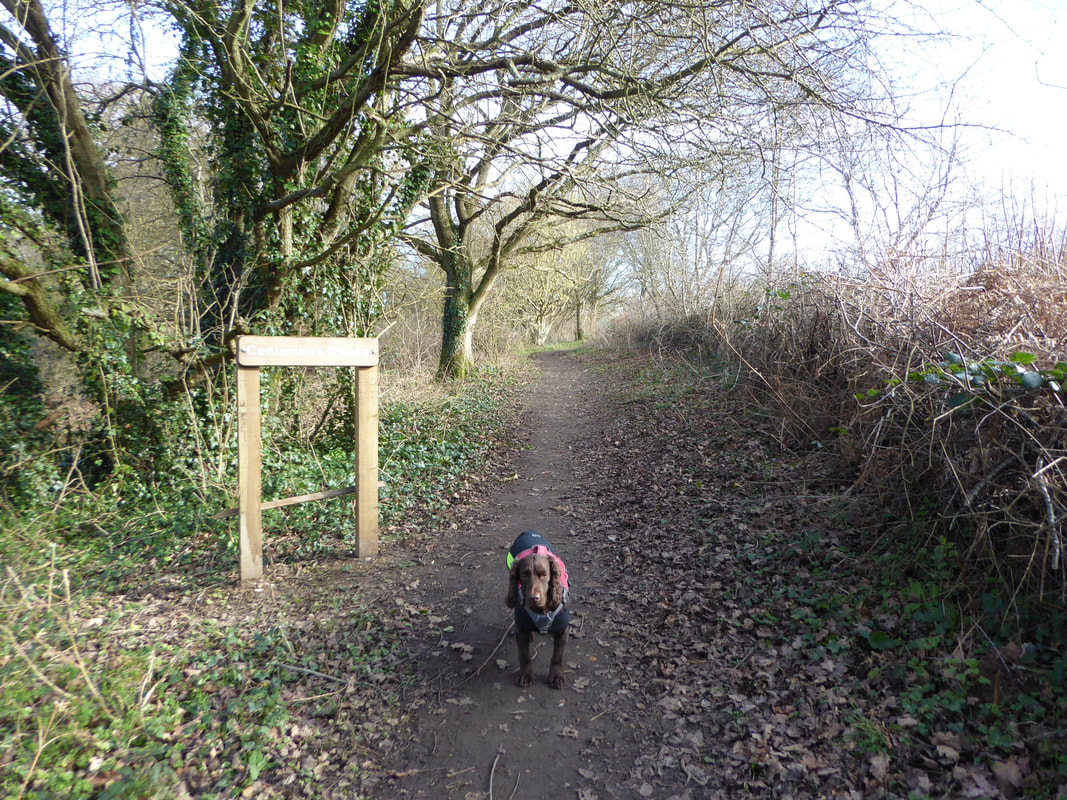 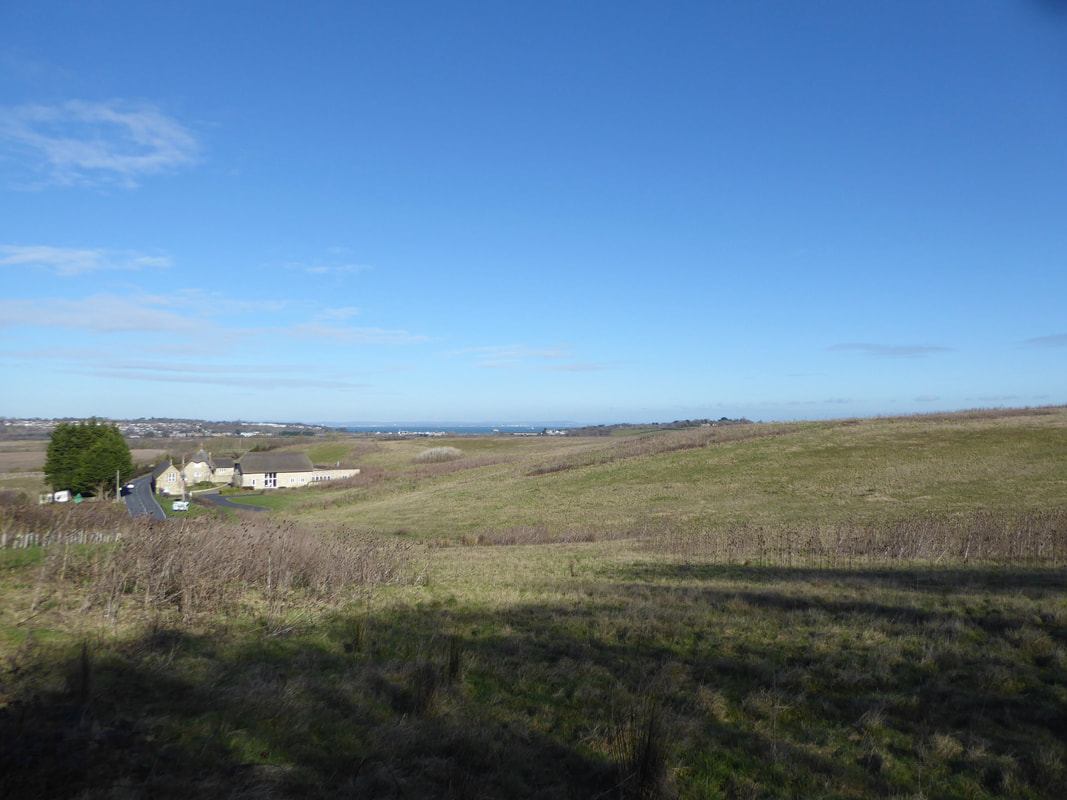 Exiting the copse the route emerges on to Sandown Road the other side of Longlands Farm (seen here).
There is a wide verge to walk on as the road is followed for a short distance. 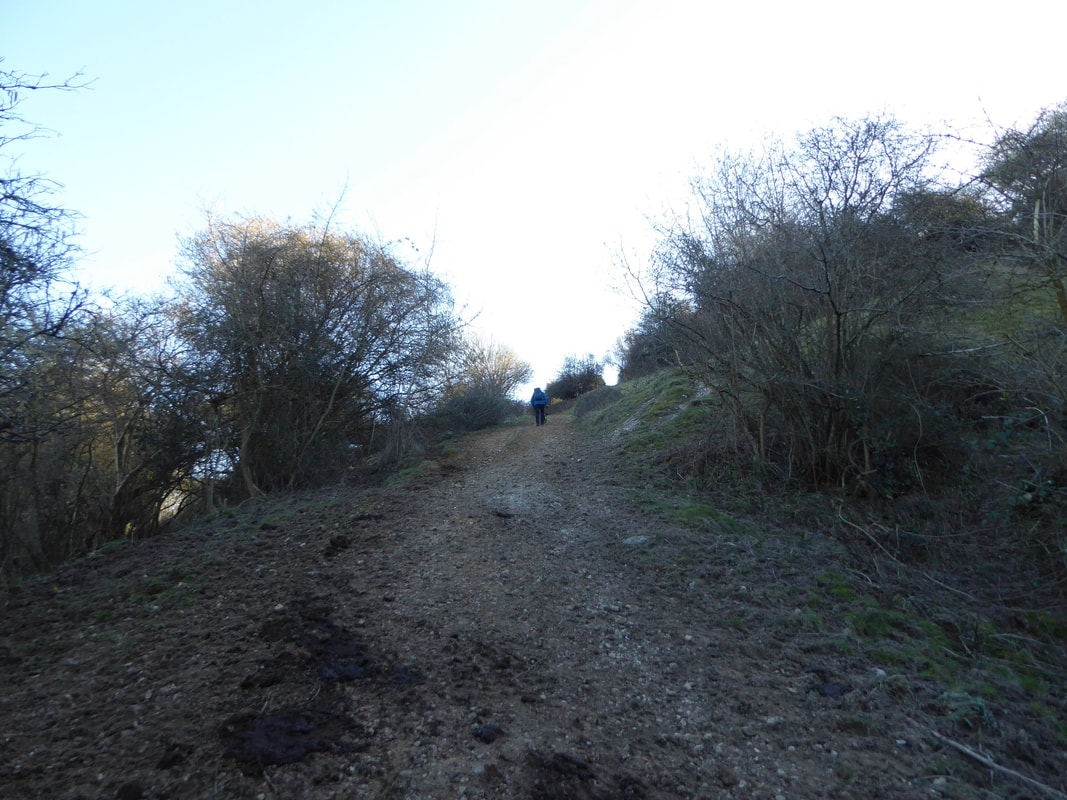 From the road the route starts to climb towards Culver Down 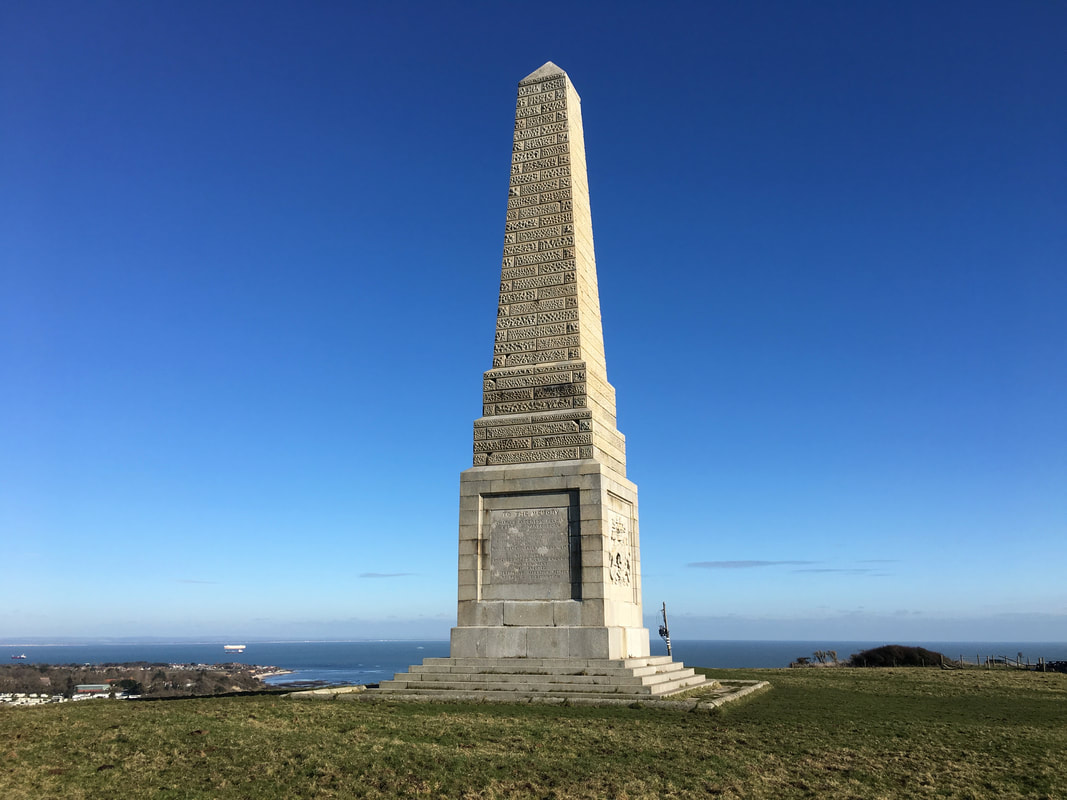 The Yarborough Monument on Culver Down 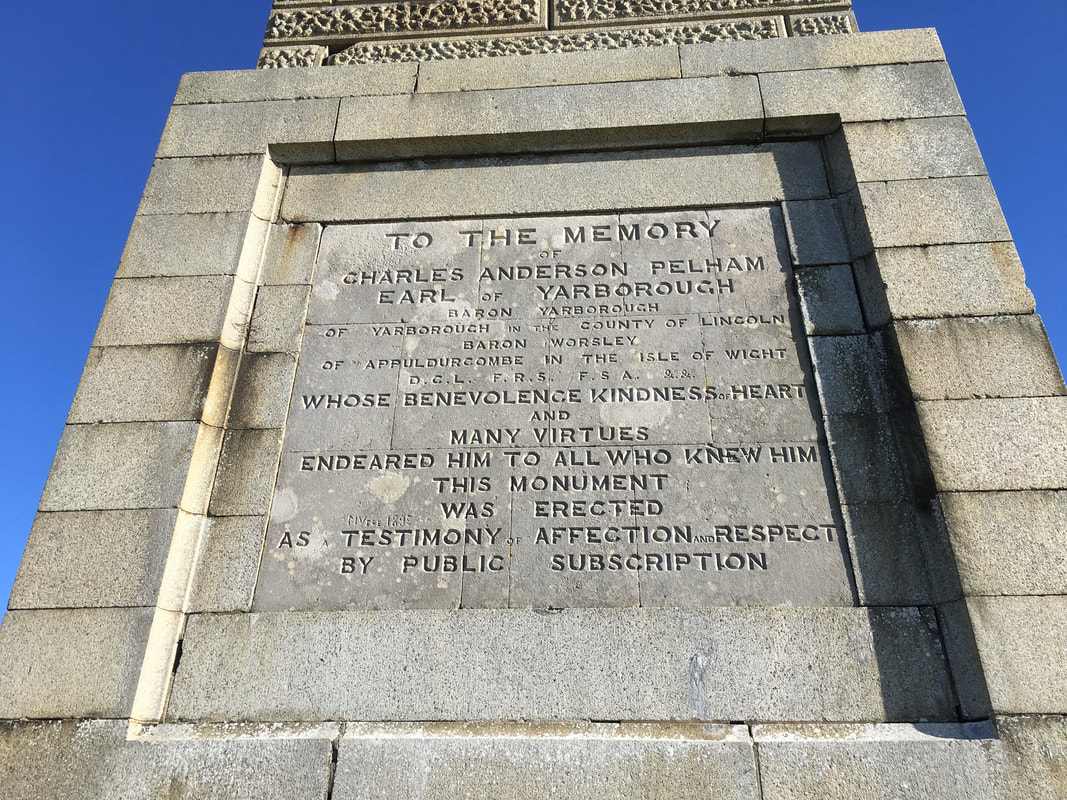 The inscription on the Yarborough Monument.
The monument was originally erected in 1849 on the highest point of Bembridge Down, 3/4 mile to the west and was moved to its present position in the 1860s when its former site was used for the construction of one of the Palmerston Forts.  Charles Pelham, Earl of Yarborough was one of the founders of the Royal Yacht Squadron and its first Commodore.  Judging by the wording he was clearly well thought of by the people of this area.

A panorama on Culver Down 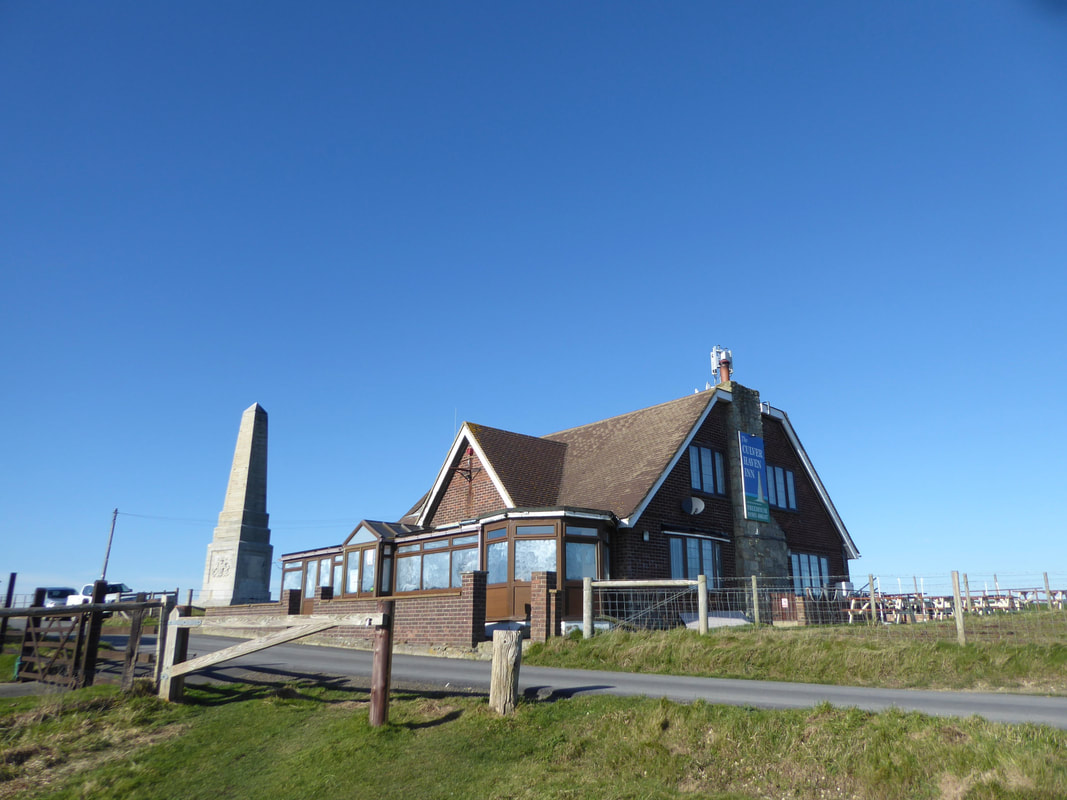 The Culver Haven Inn on Culver Down.
We were going to stop and have a drink but unfortunately it was shut.
These two stones were not that far from Culver Battery and could be either anchor stones for the radar mast or War Department Boundary Stones 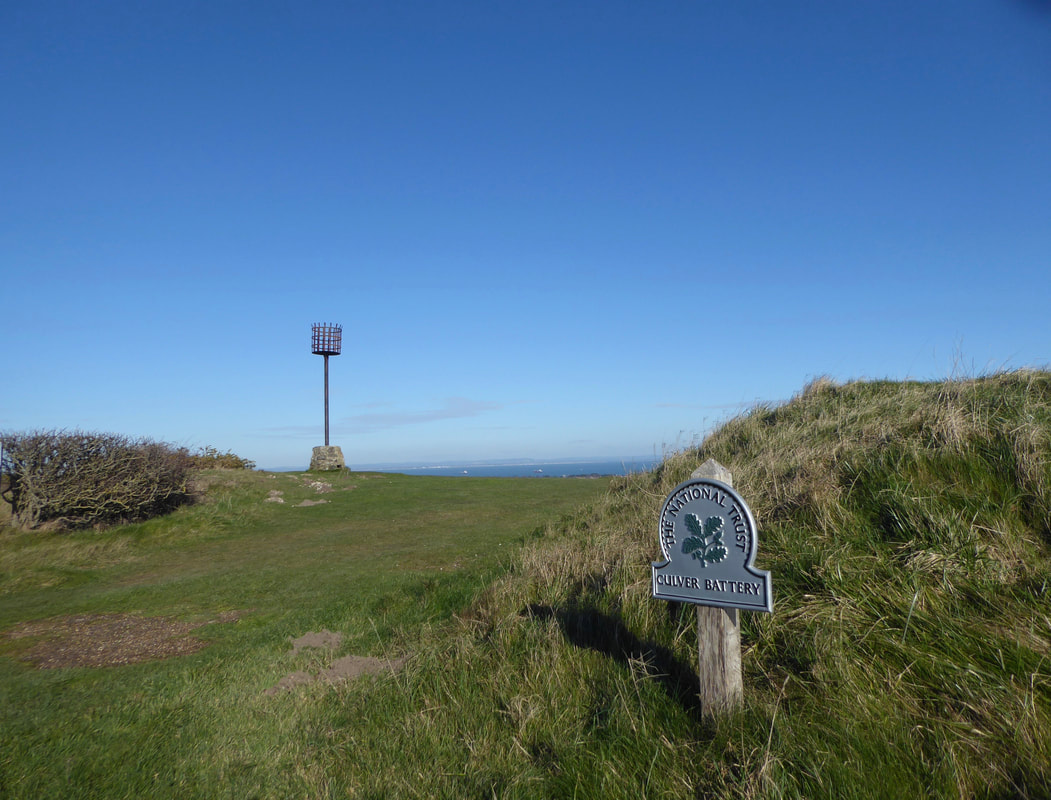 Near Culver Beacon is the National Trust sign for Culver Battery 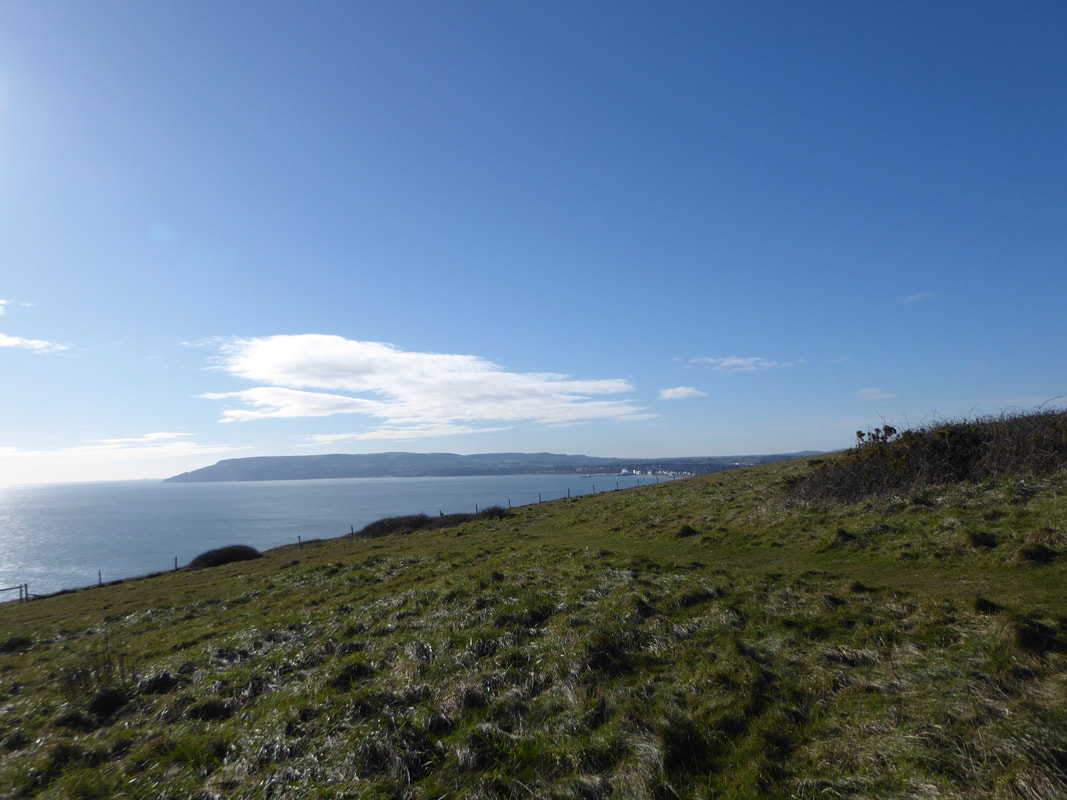 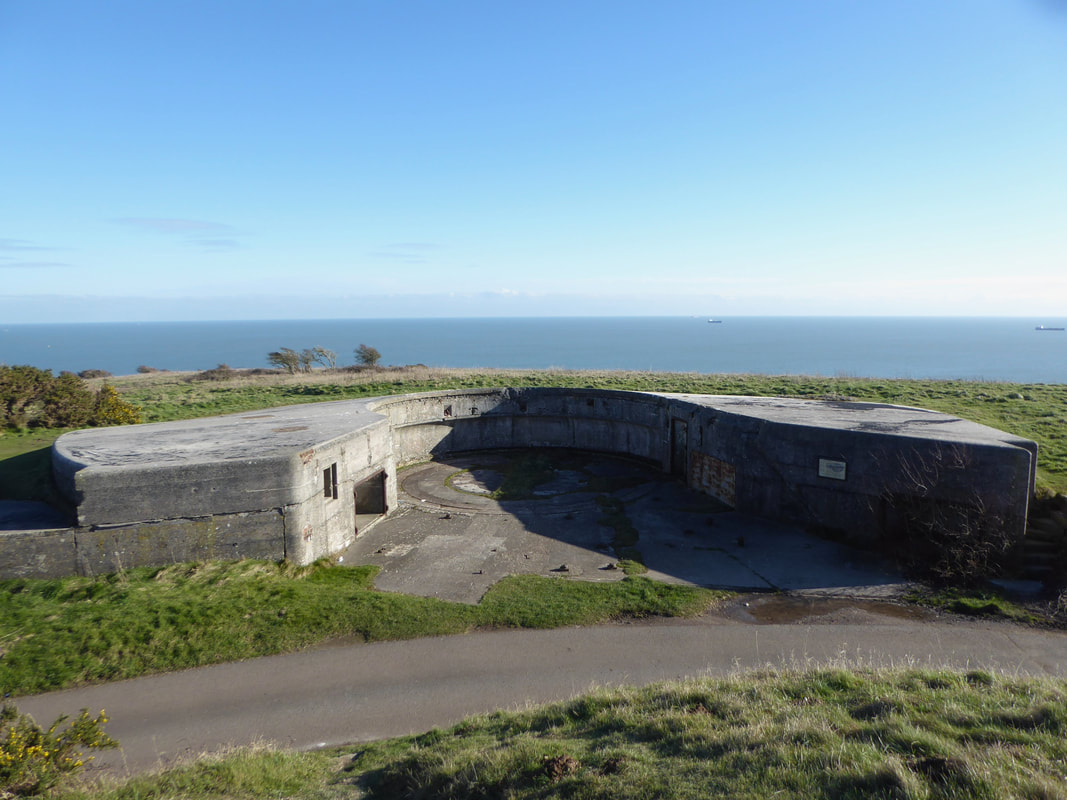 One of the two gun emplacements at Culver Battery.

​The Battery was completed in 1906 and was used extensively in both World Wars with the HQ for the Home Guard at nearby Bembridge Fort. By 1924 the guns had been upgraded to MkVI mountings with a range of almost 1 mile.  ​When they fired, the noise & vibration was so great that nearby residents had to be warned beforehand. 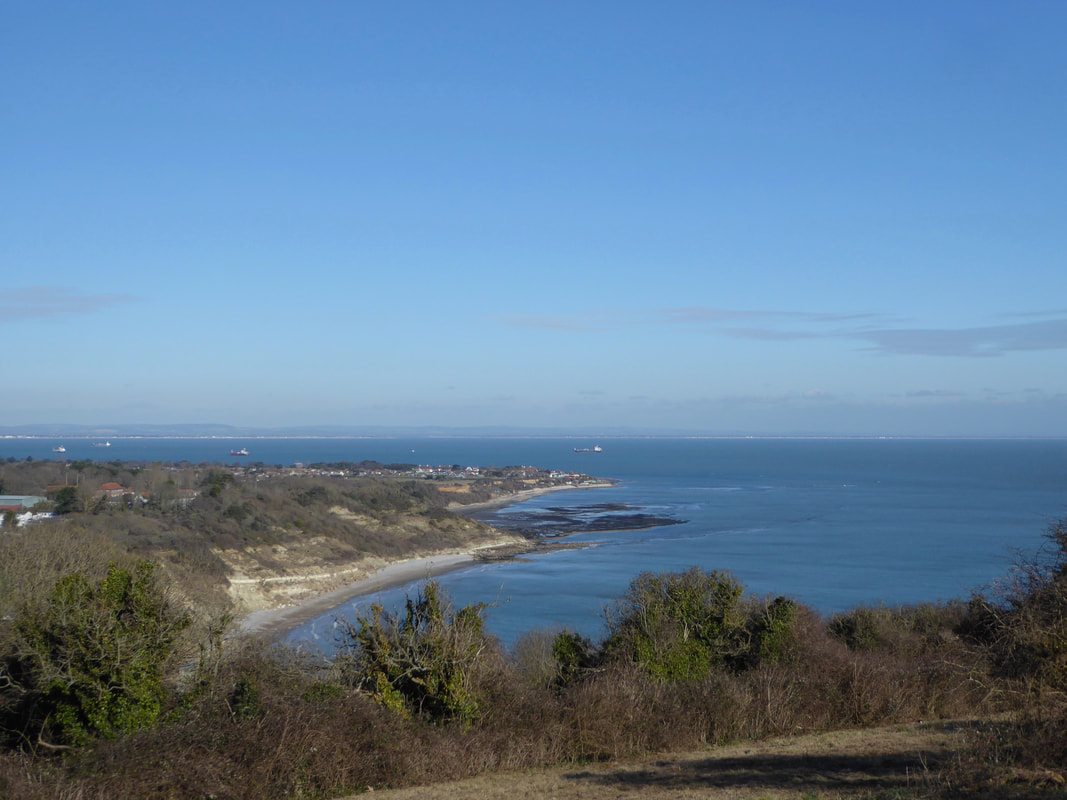 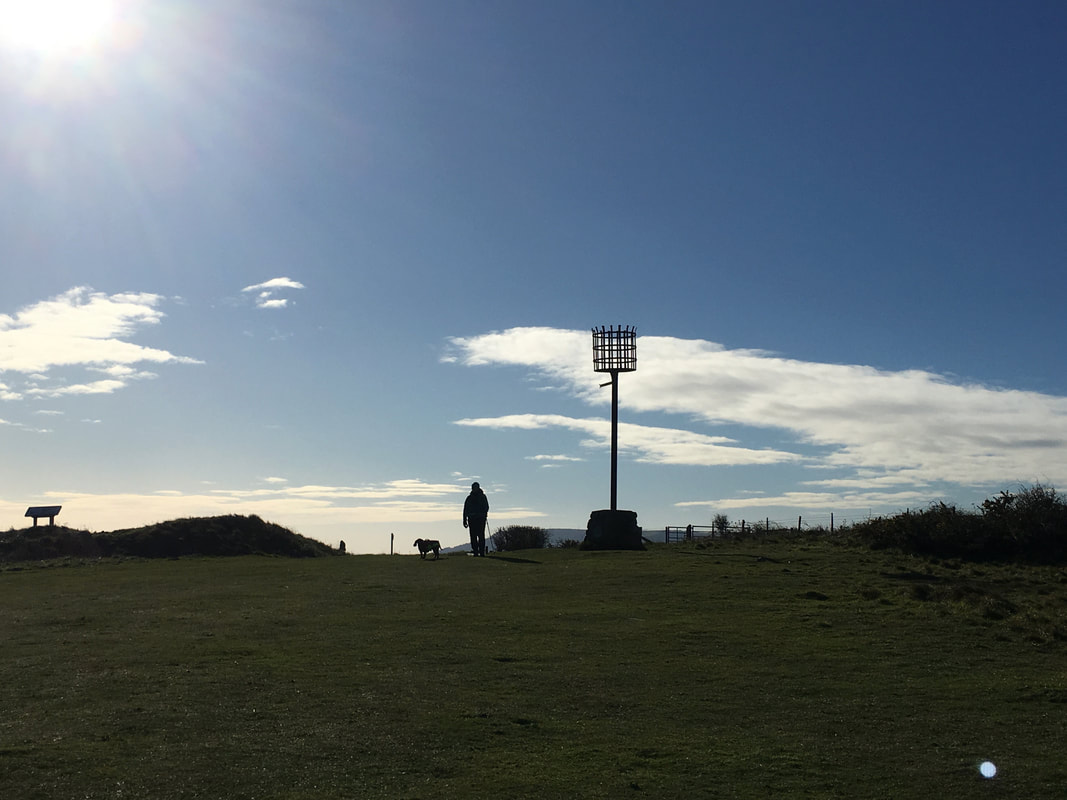 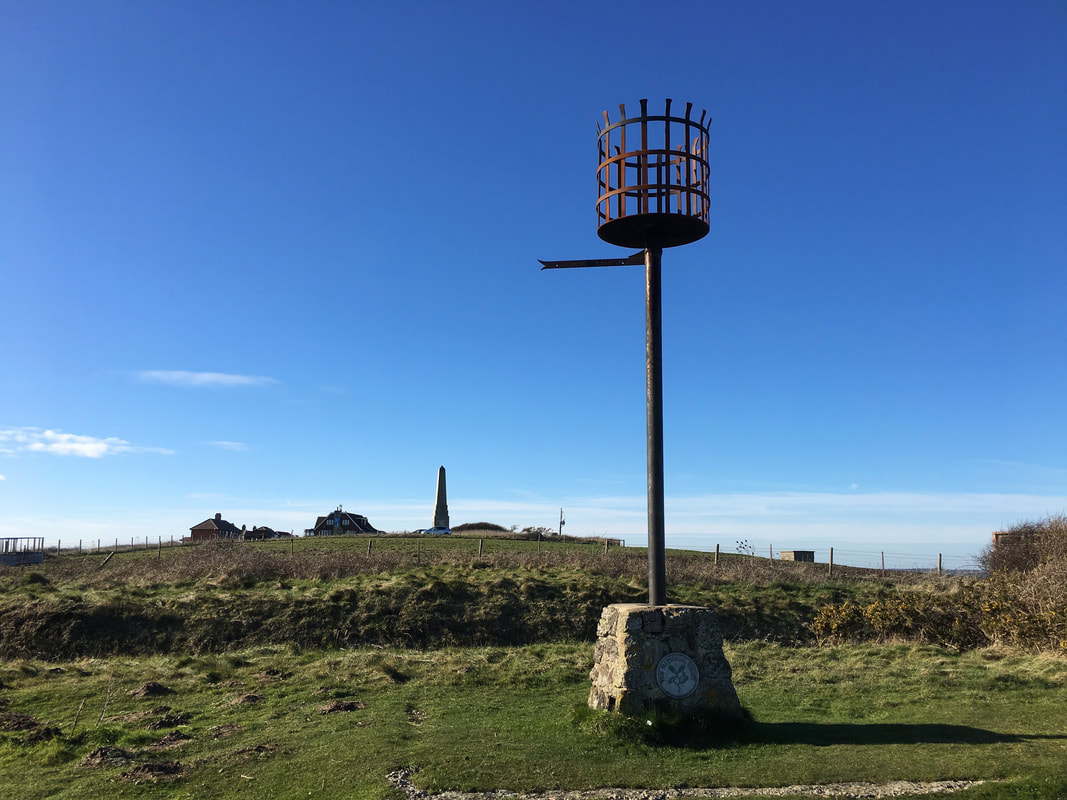 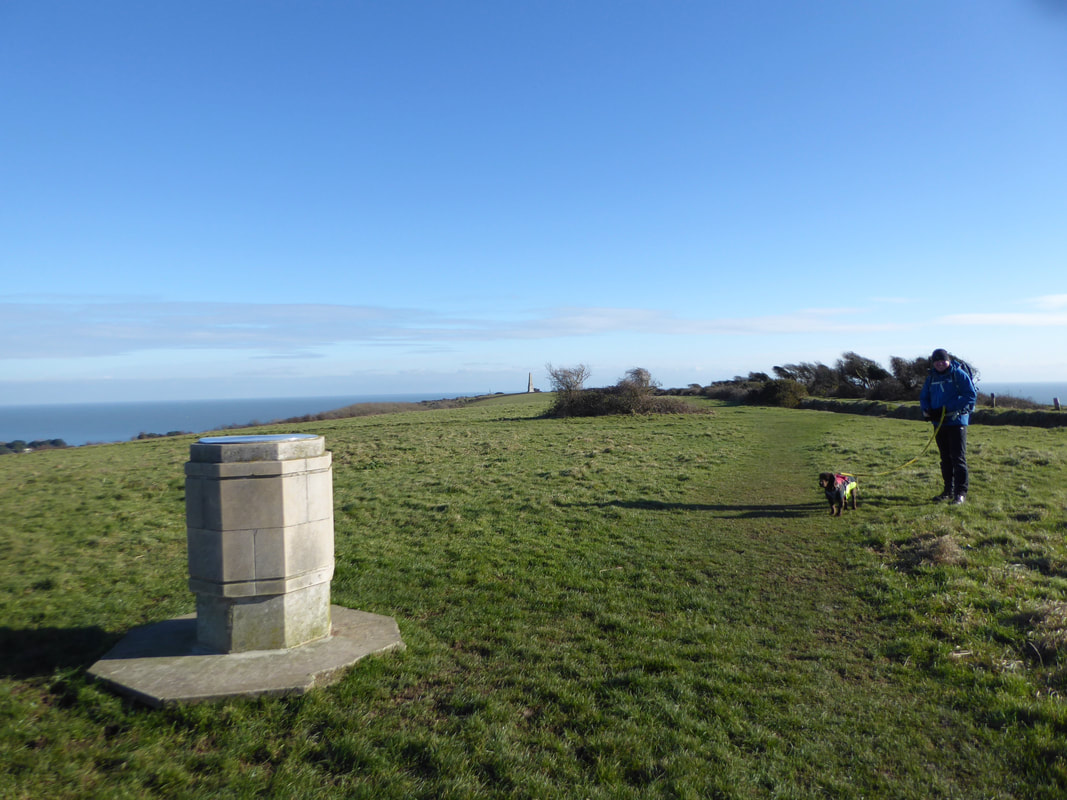 The Toposcope on Culver Down 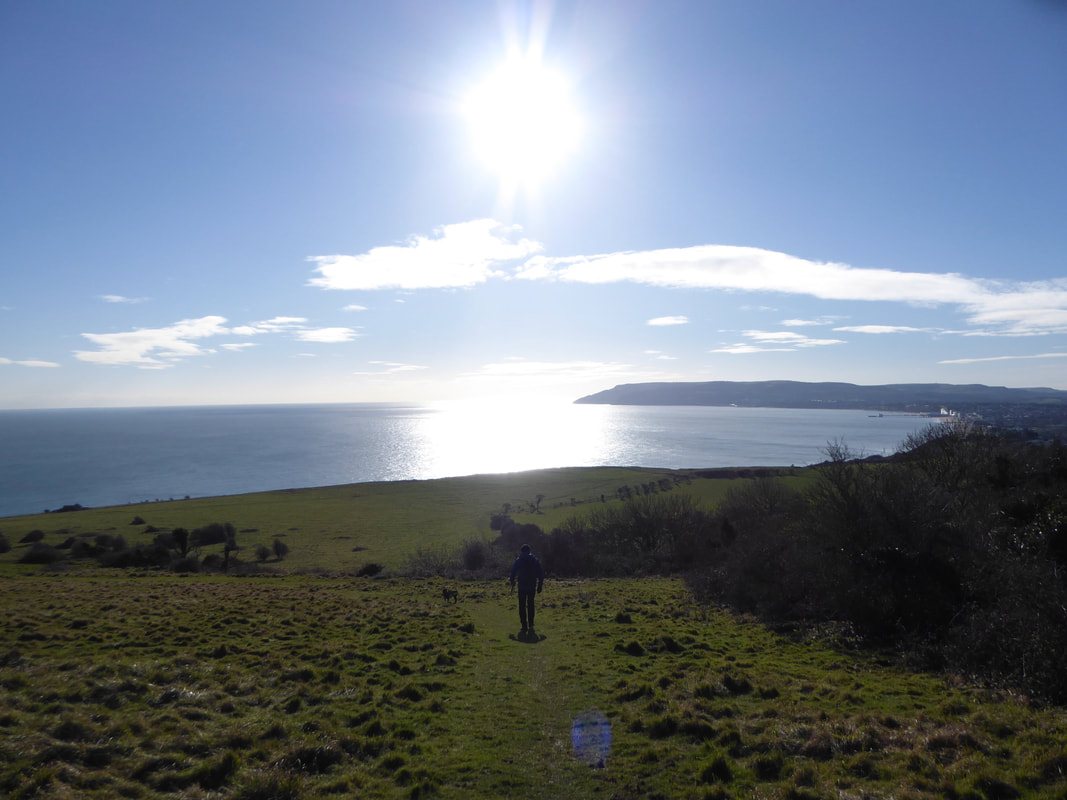 After a quick walk out to Bembridge Fort there was nothing really to see there unfortunately therefore we made our way over Bembridge Down back towards the coast. 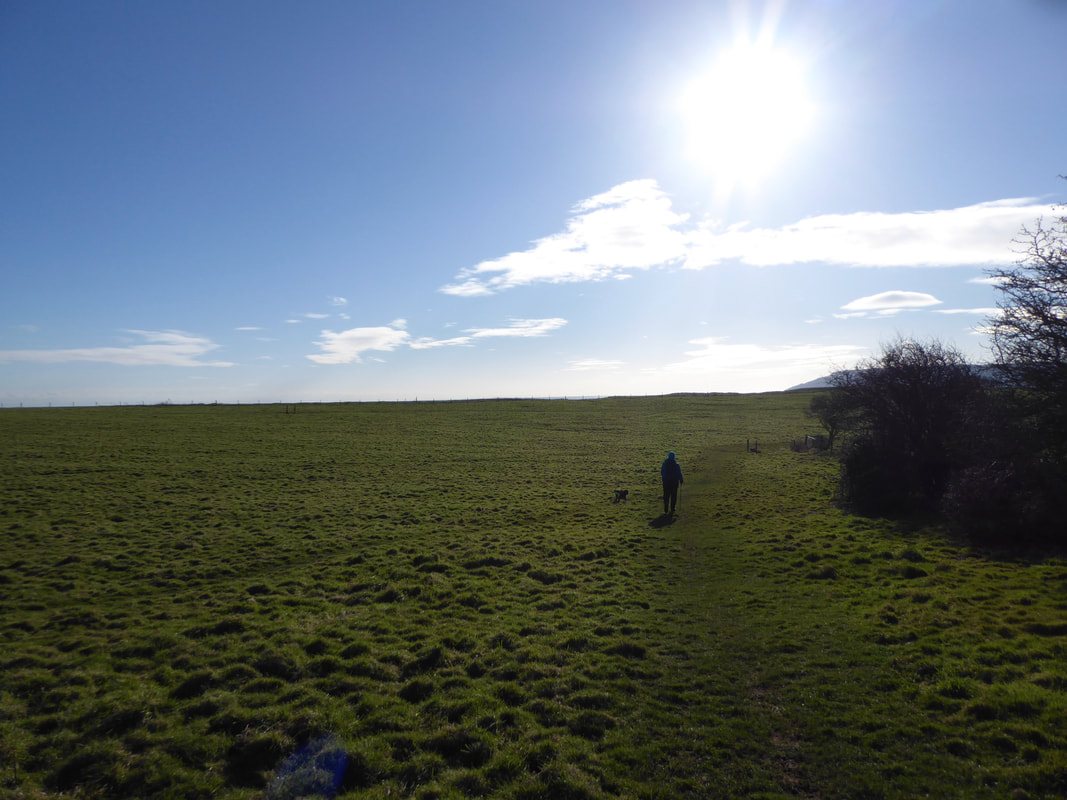 This was a nice stretch over Bembridge Down 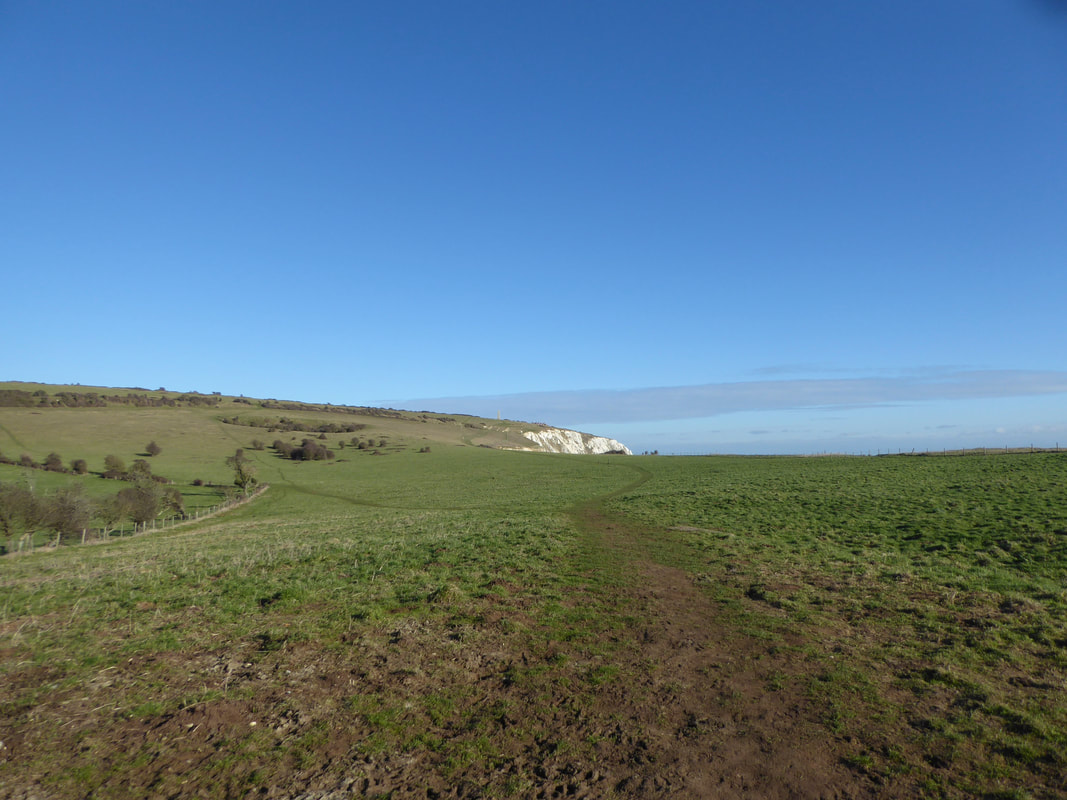 Looking back to Culver Cliff from Bembridge Down 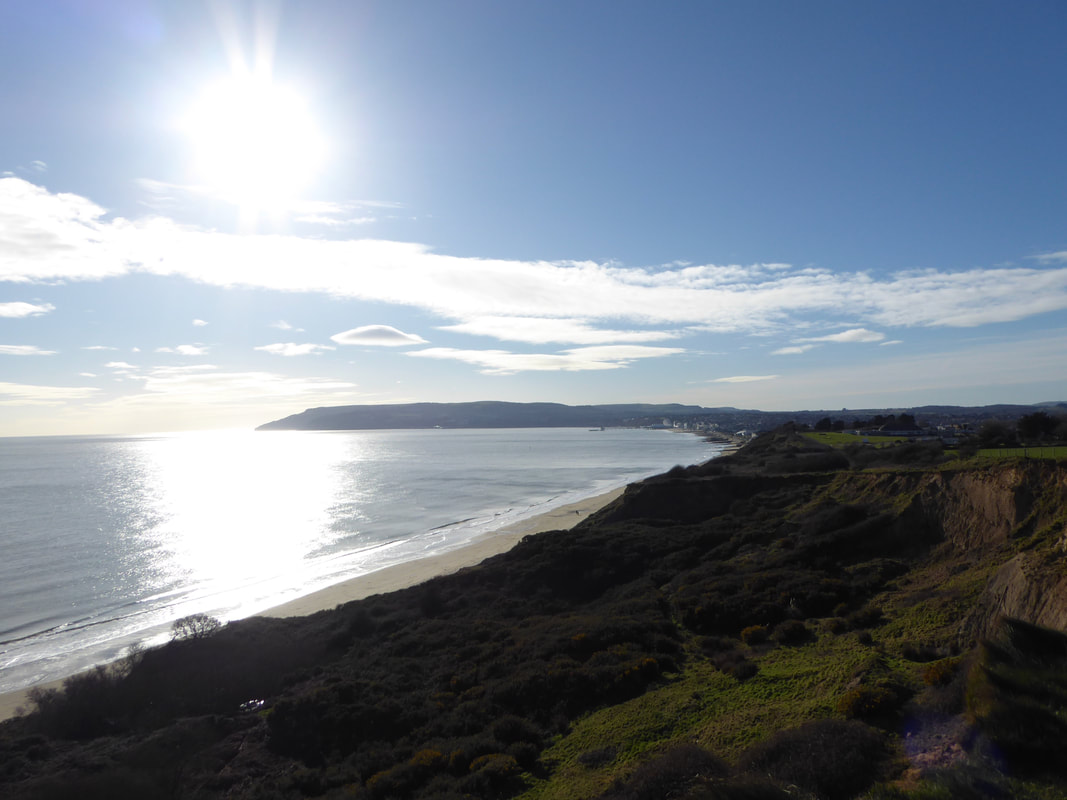 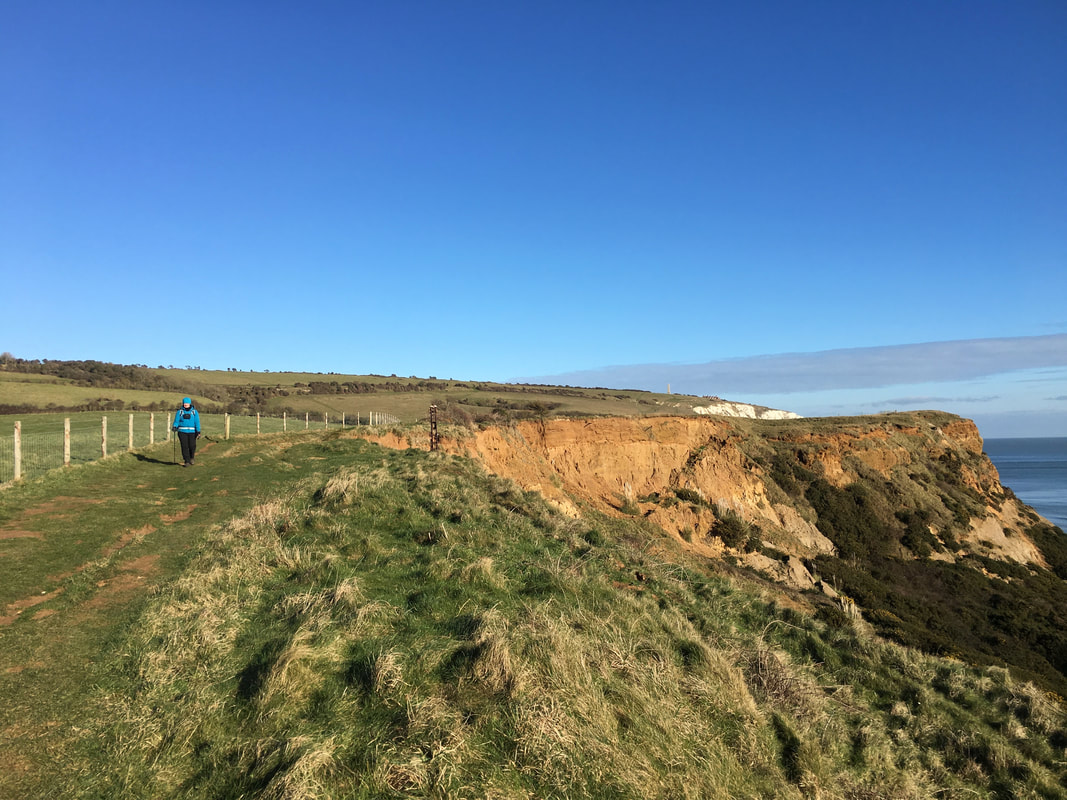 Above Red Cliff - again, another lovely section of walking 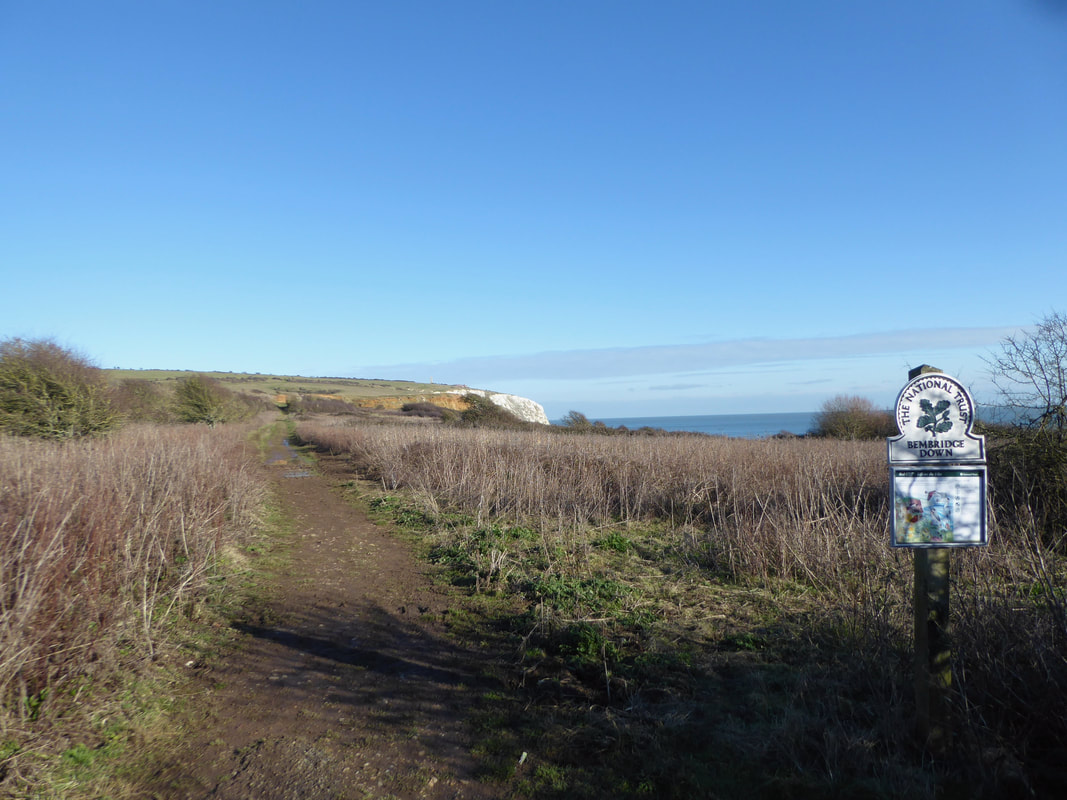 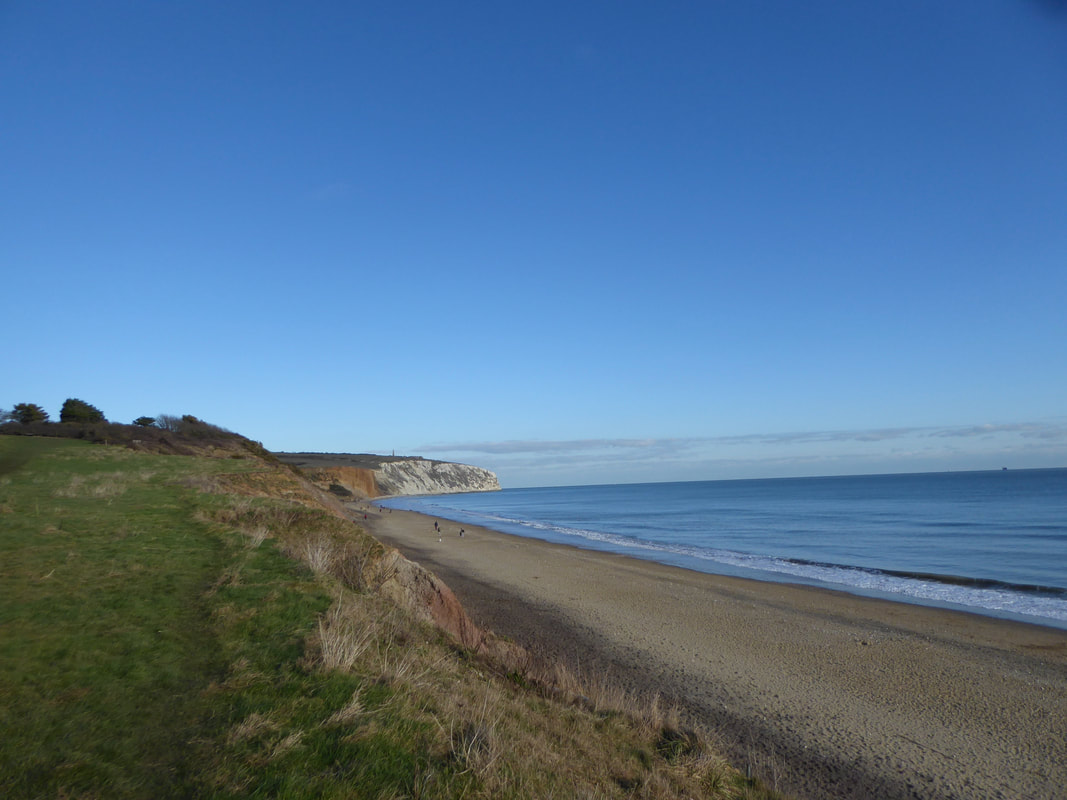 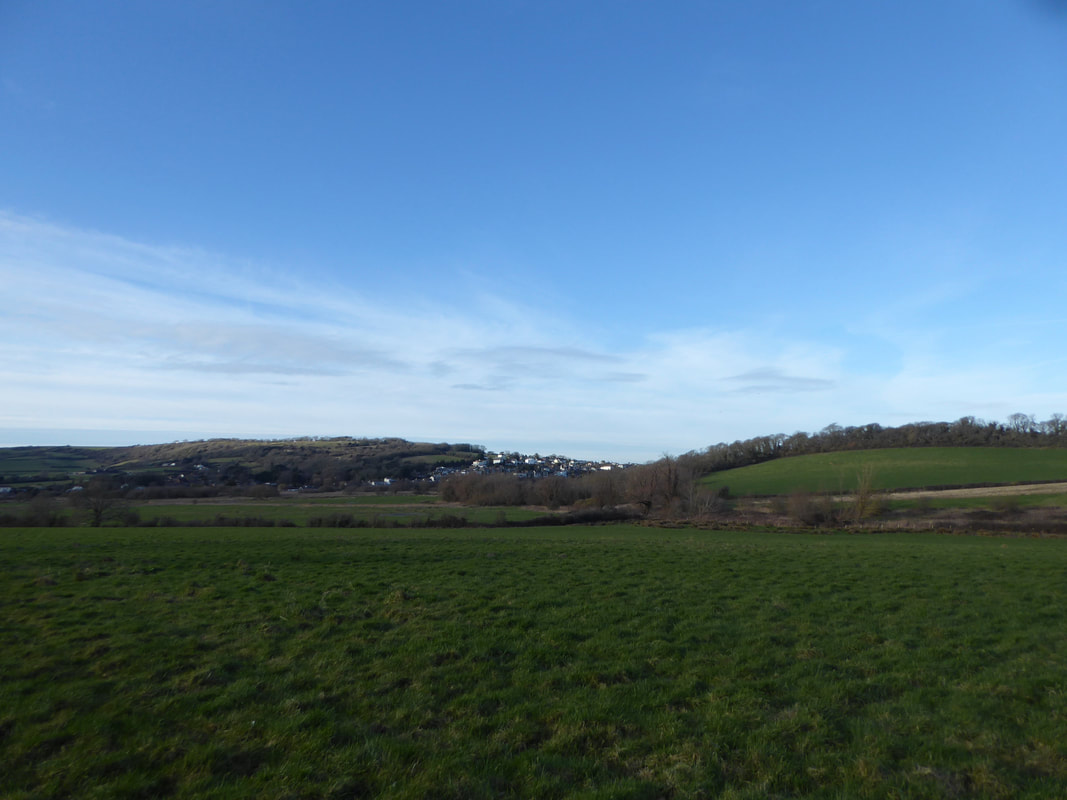 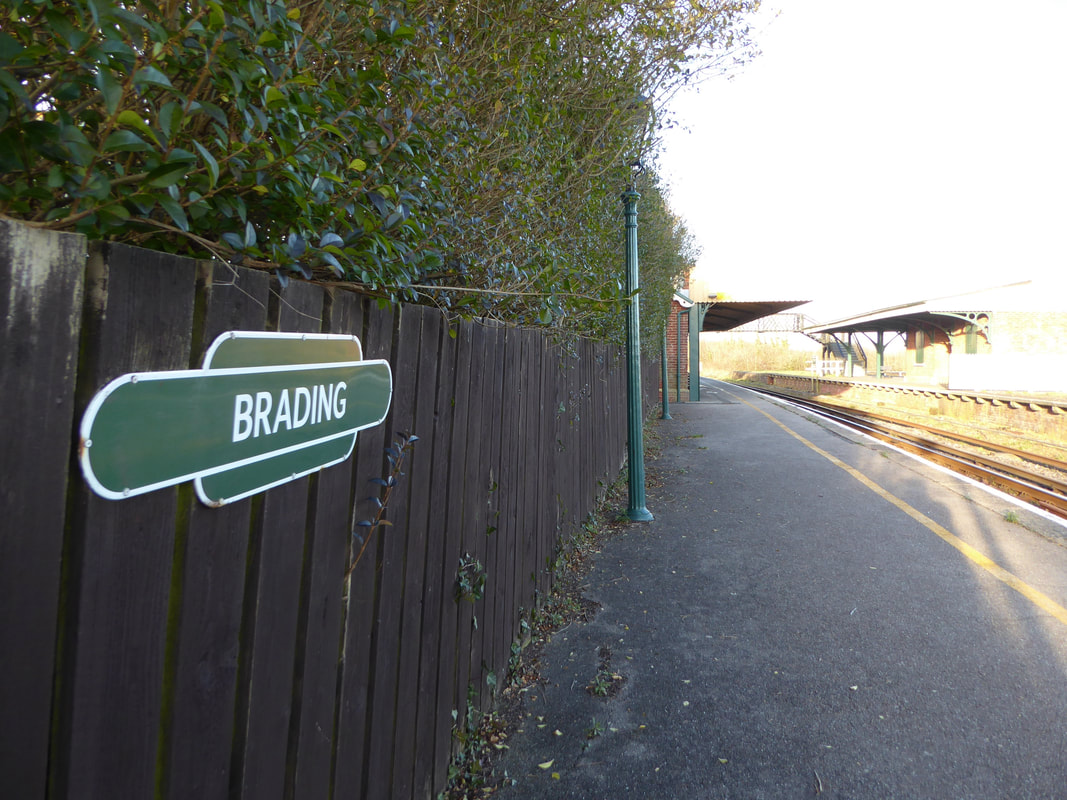 Brading Station
The station is Grade 2 listed station on the Island Line between Ryde & Shanklin. Owing to its secluded location and single operational platform, it is one of the quietest stations on the island. 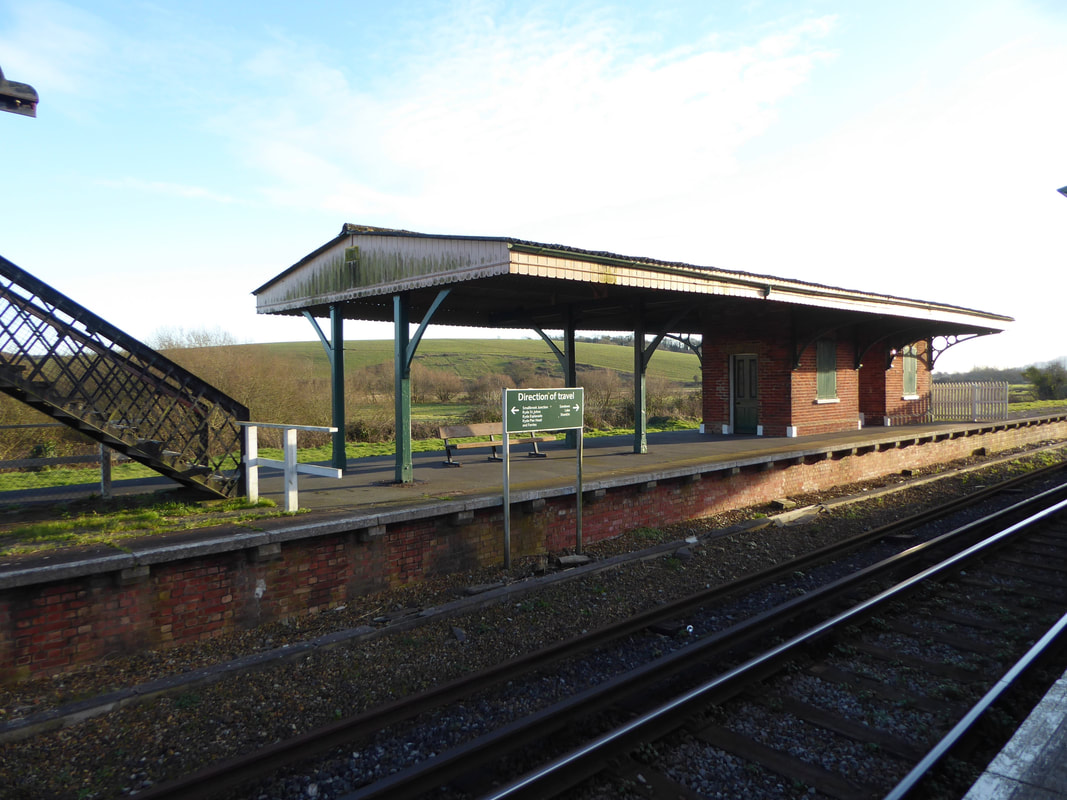 It was clear to see that the station needed a fair amount of tender loving care - it was in a bit of a state. 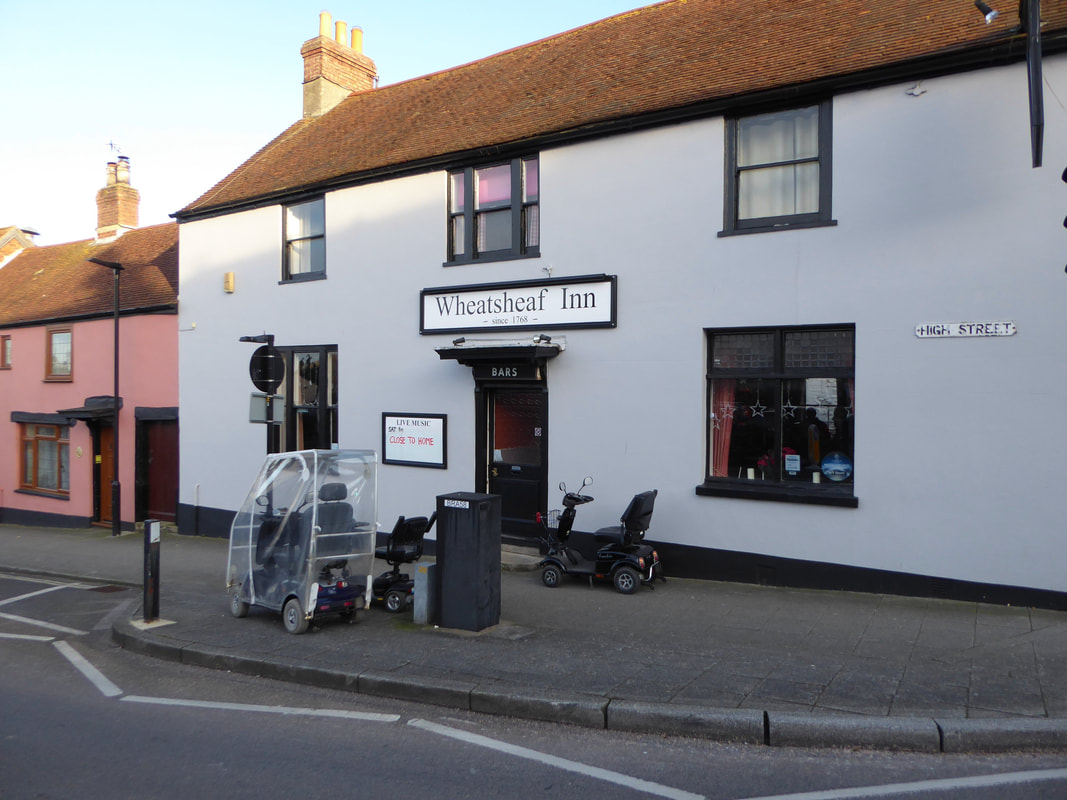 Possibly the home base of the infamous Isle of Wight Mobility Scooter Bandits. ​Hopefully they weren't holding the place up or going to drive home after having a skinful. 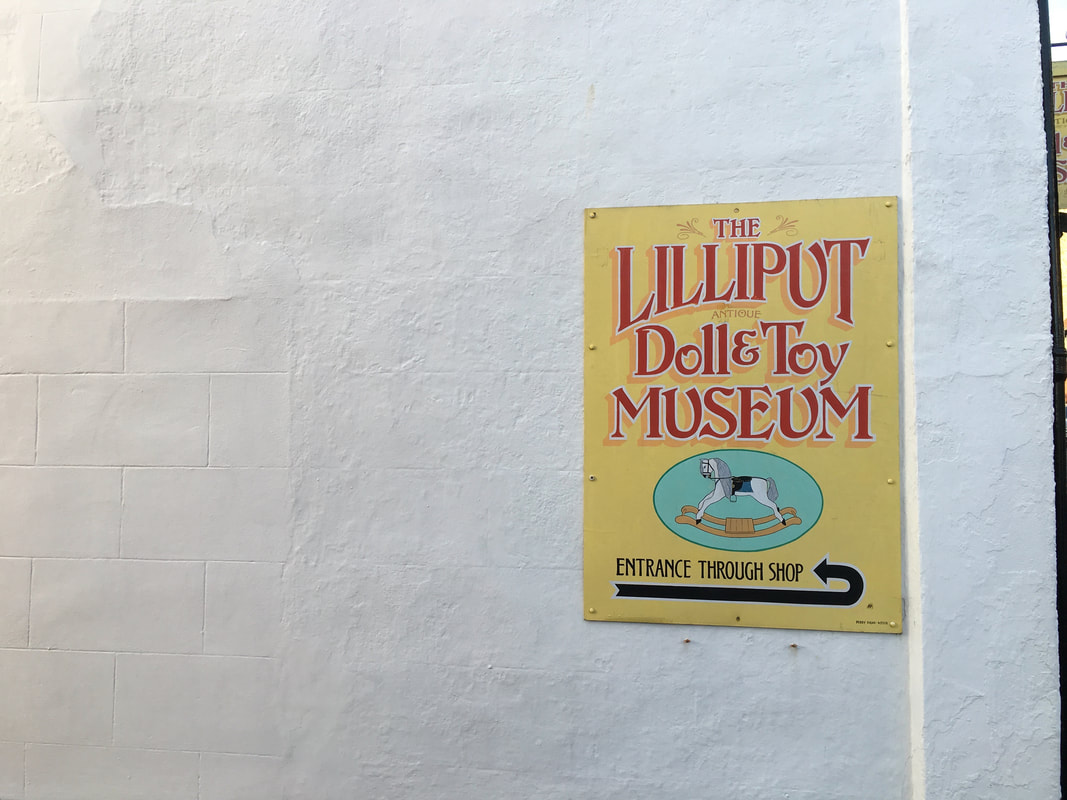