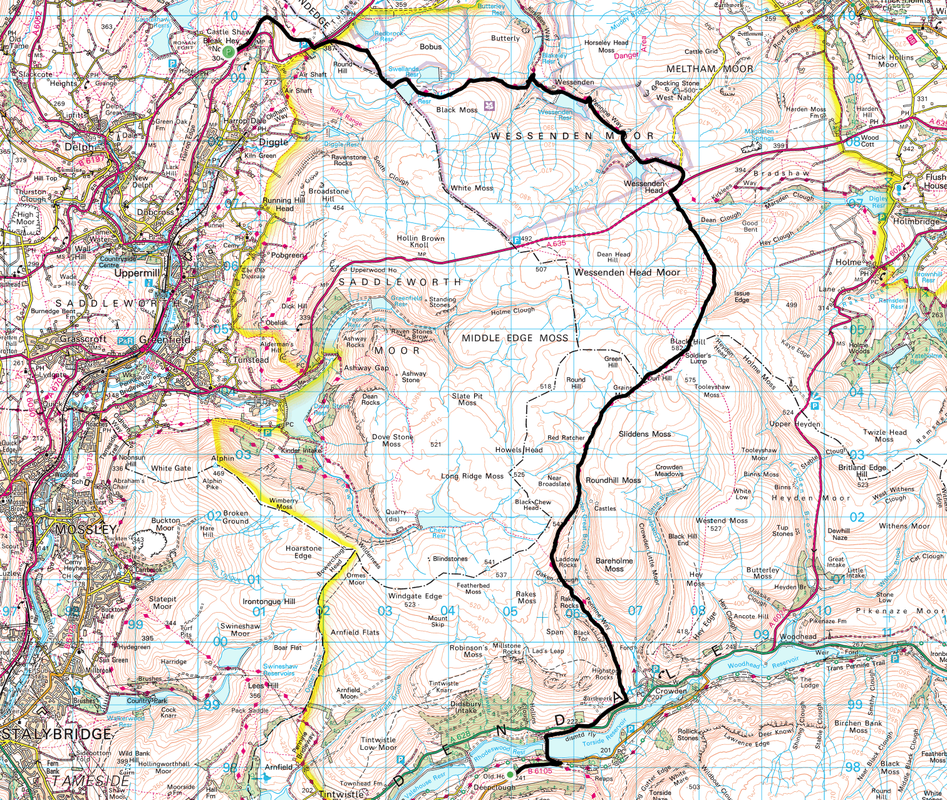 After a good nights sleep we were looking forward to the 2nd leg today which for us was through an area we had not walked before. Following a very good Full English Brekky in company with our walking companion Chips, we gathered our stuff together and said goodbye to Jim & Joanne at The Old House. The weather promised to be a day of sunshine and light breezes and so it proved.

We made our way back on to the official route and headed over the dam wall between Rhodeswood & Torside Reservoirs to reach the busy A628 which is a major road linking Greater Manchester & South Yorkshire. Taking our time to cross this busy road, we then headed along a tarmac track which we left before it reached the village of Crowden. There now began a lovely stretch of the Pennine Way, firstly along Crowden Brook and then high above Crowden Great Brook. Ahead of us we could see a solitary walker who was starting the steep ascent up on to Laddow Rocks as we passed the Harry Phillips Memorial Plantation. ​ 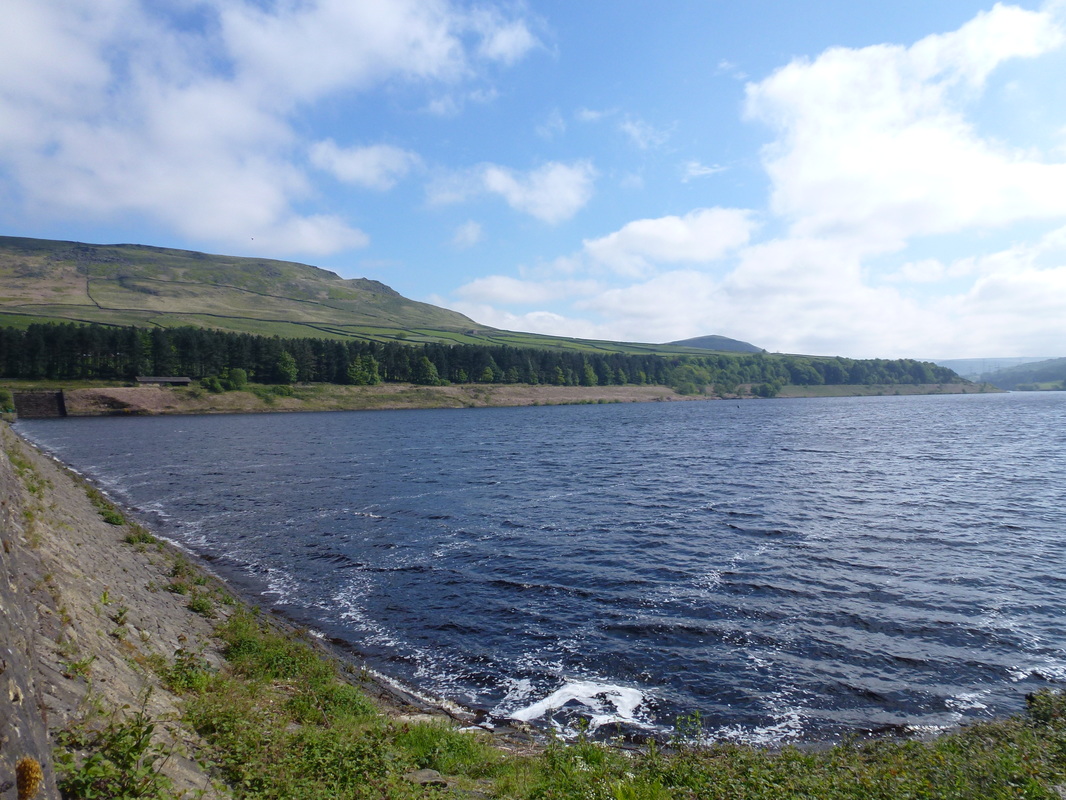 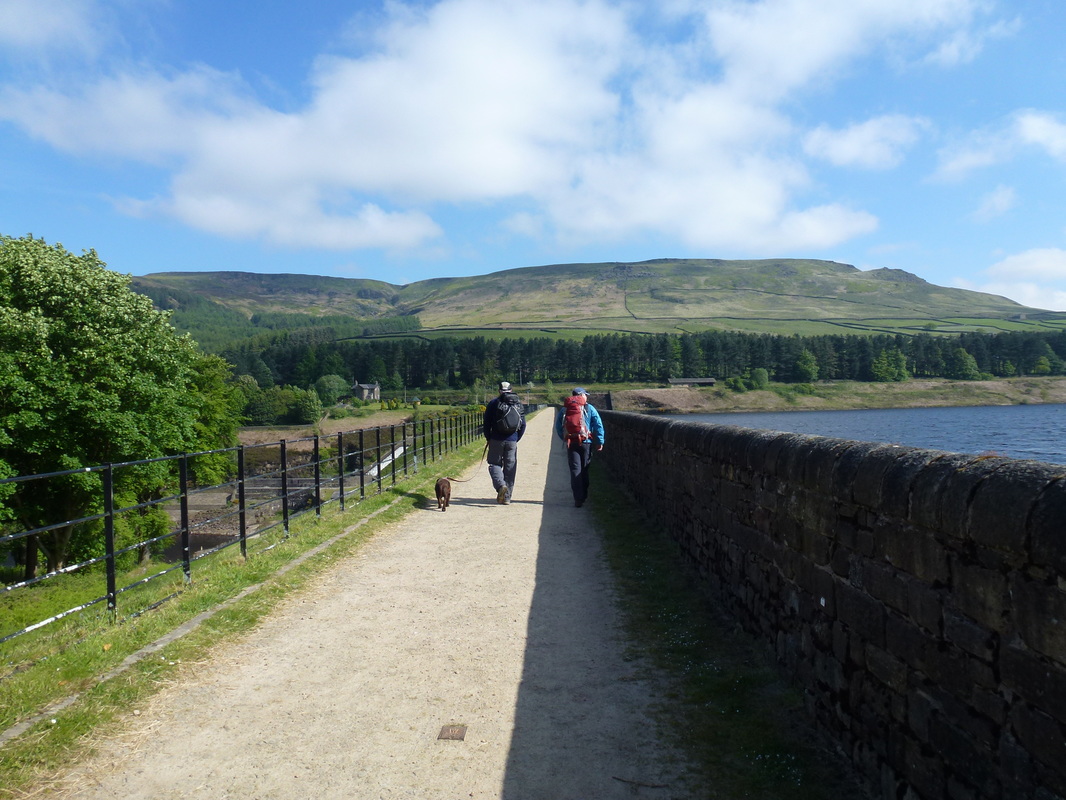 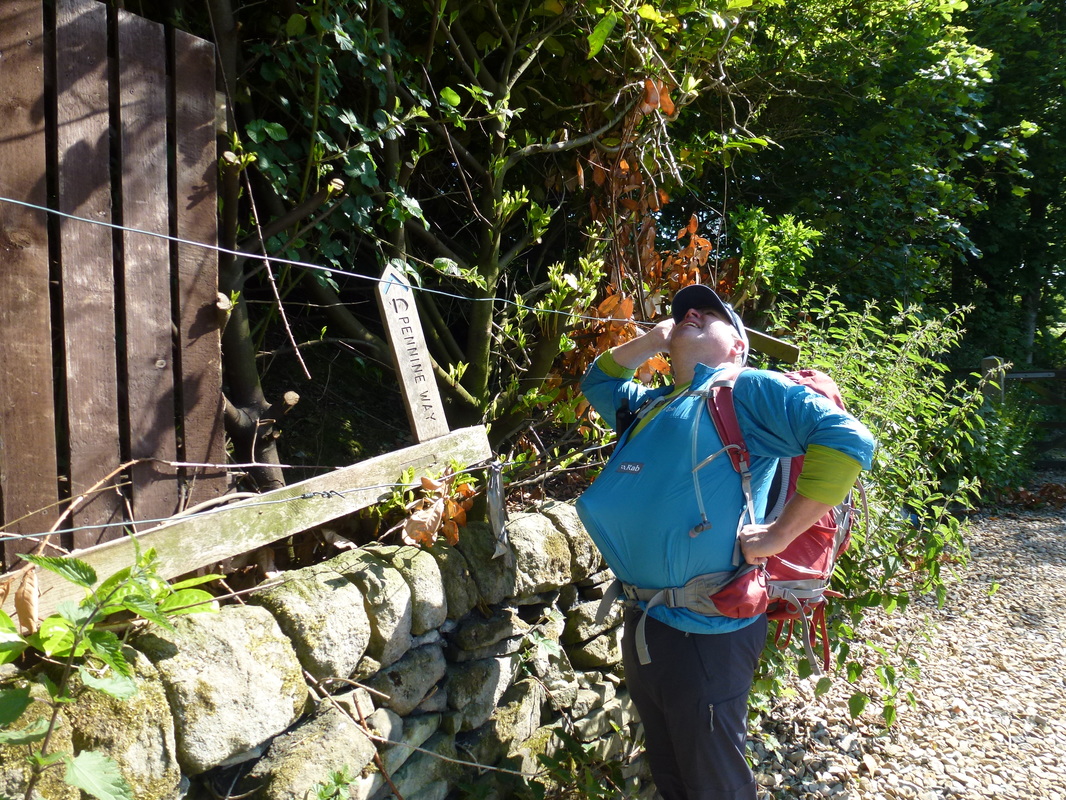 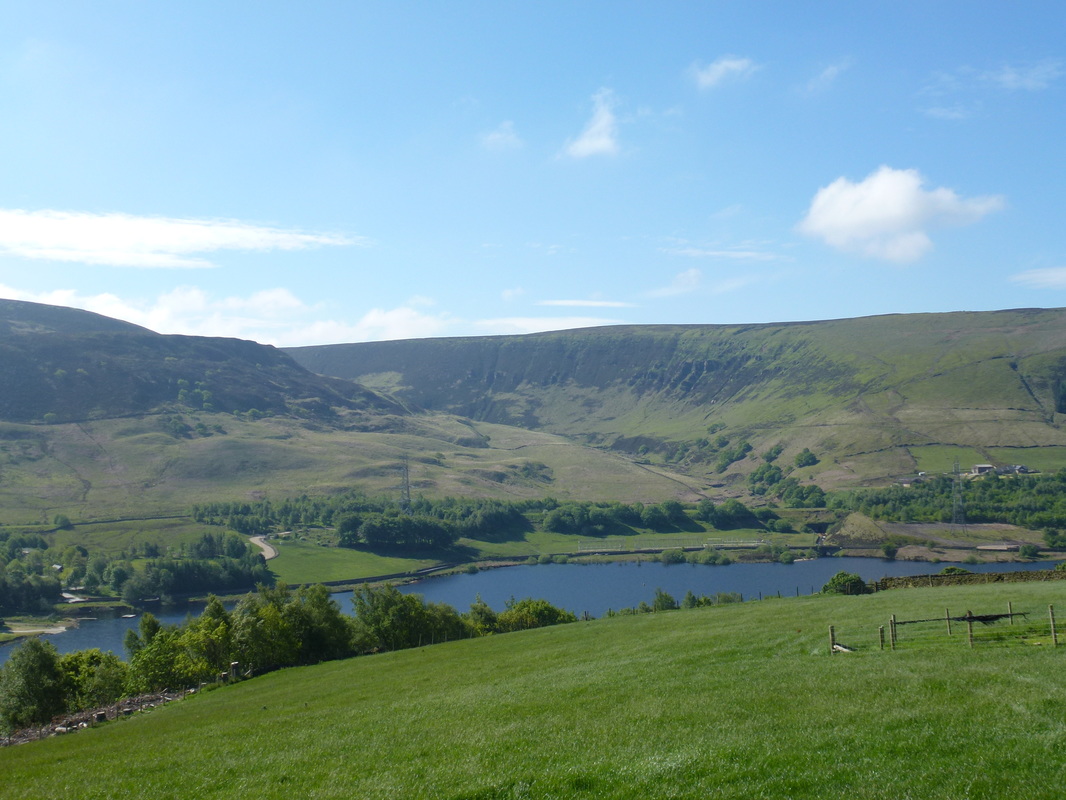 Torside Clough - our route down yesterday is to the right 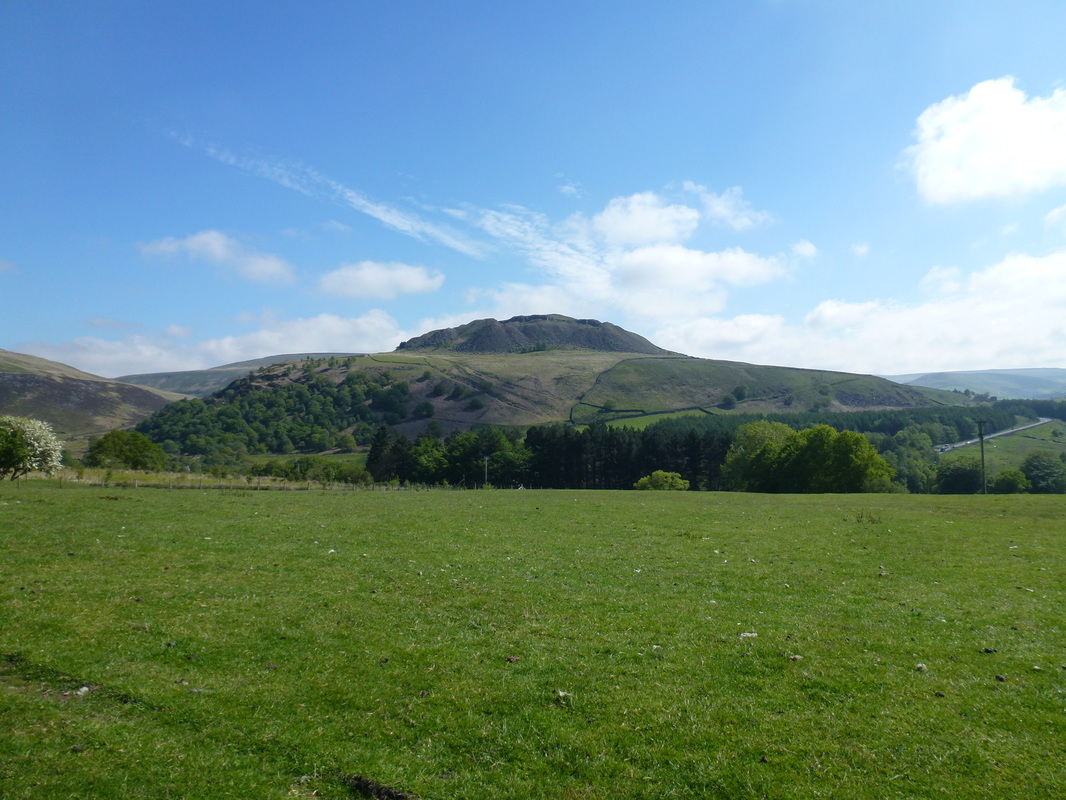 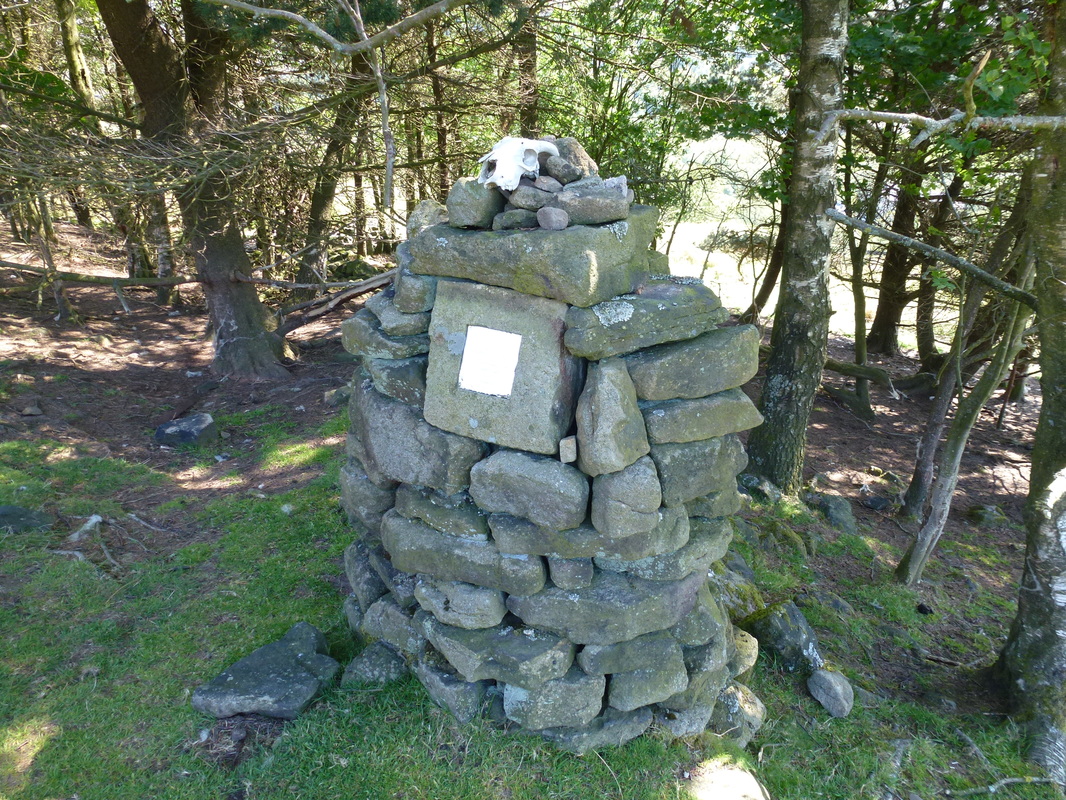 The Harry Phillips Memorial Plantation
After a short boggy section we reached the start of the steep ascent to Laddow Rocks and spotted another walker making their way up the rocky incline and we caught up with her about half way to the top of the escarpment. Reaching the top of the rise the views back to Crowden, along the edge and through the valley really opened up as we made our way along the rough path on Laddow Rocks above Crowden Great Brook.​ 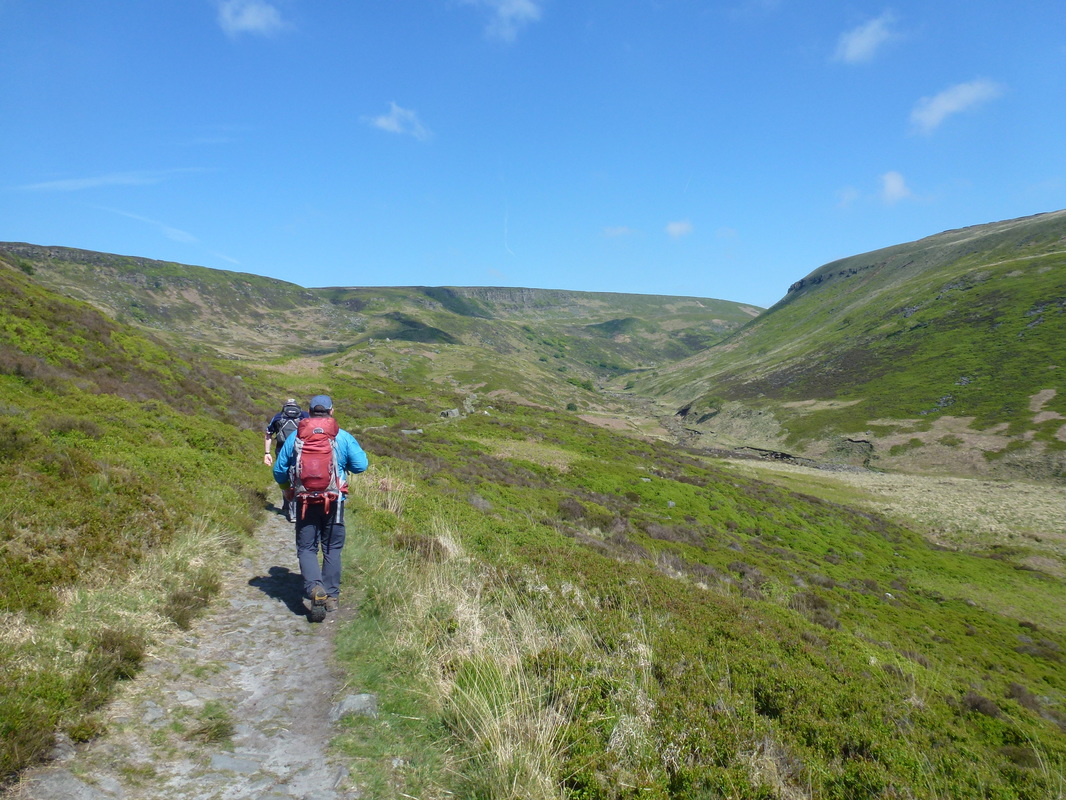 Alongside Crowden Great Brook with Laddow Rocks ahead 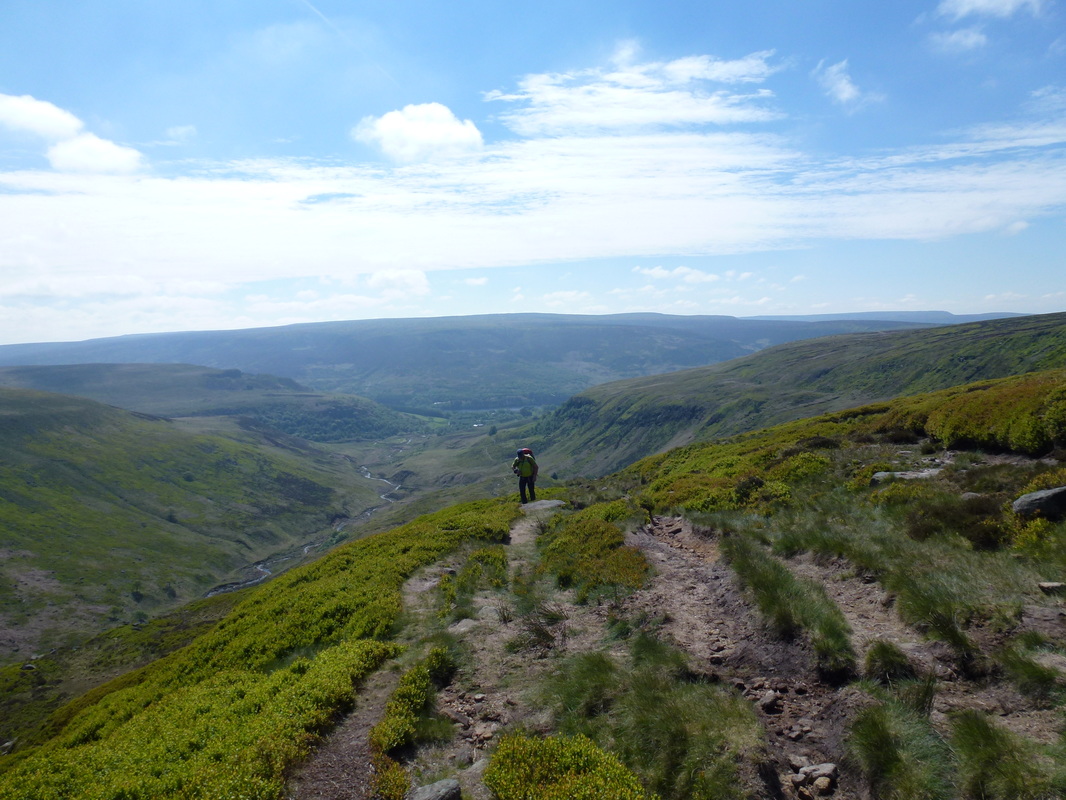 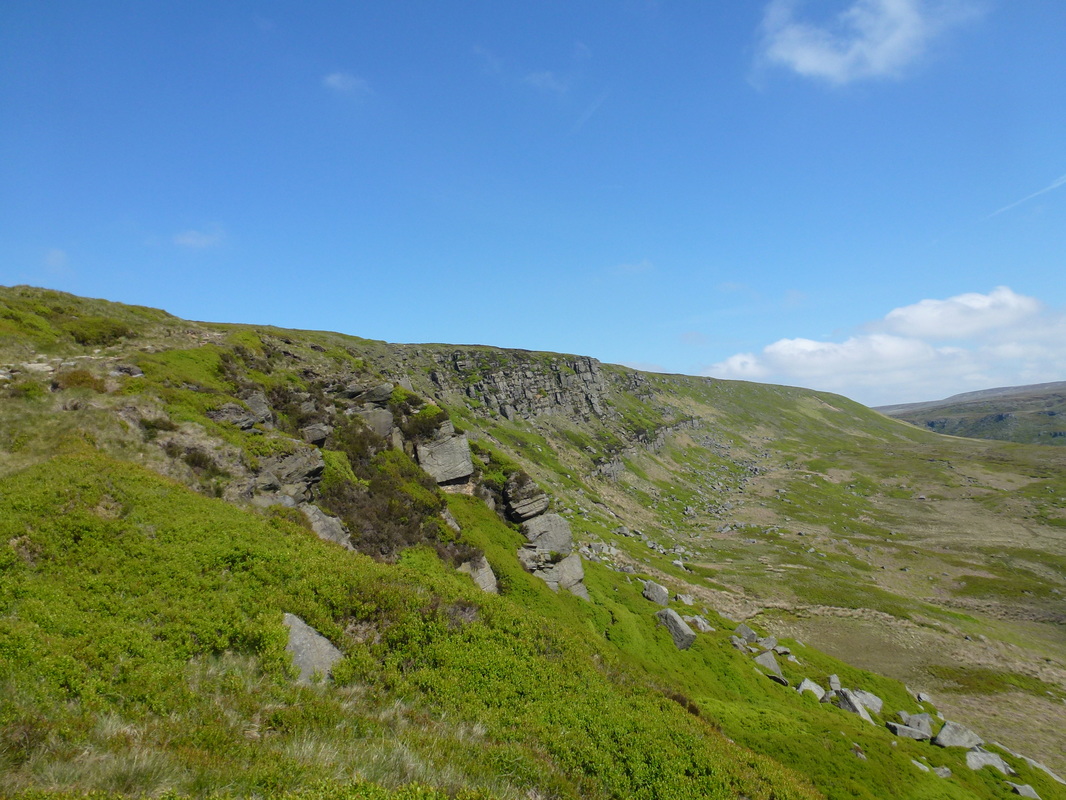 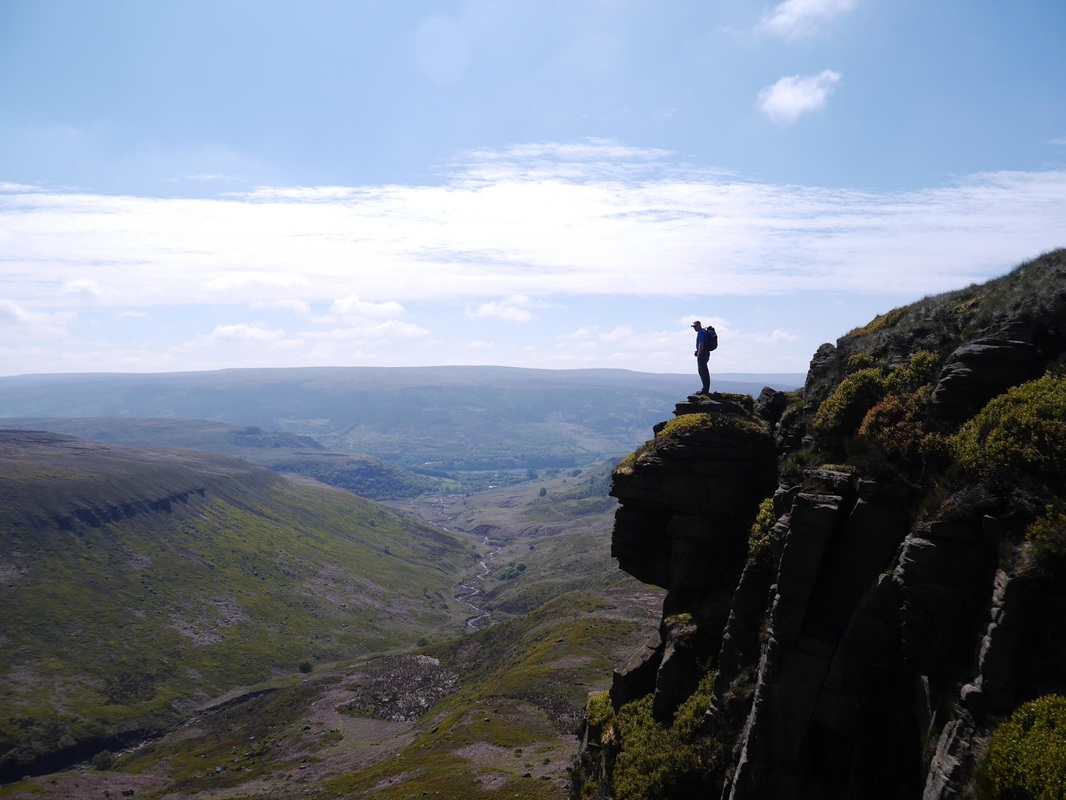 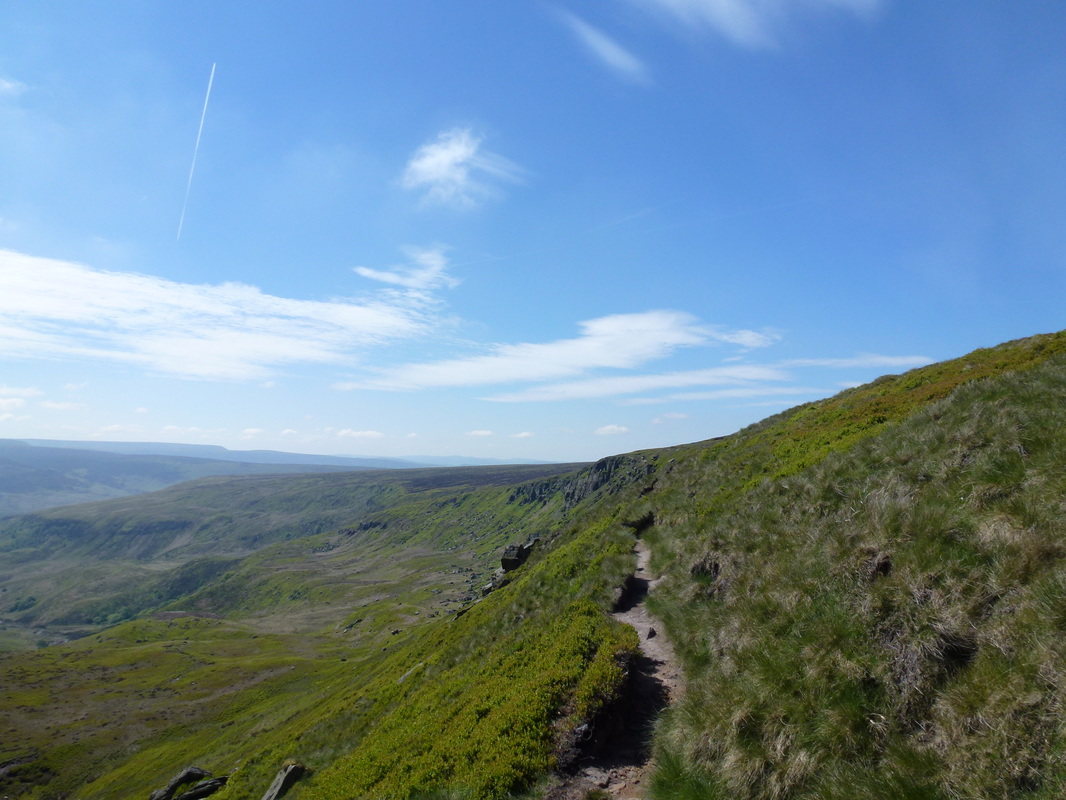 The views were exceptional from Laddow Rocks today
Leaving Laddow Rocks there now began a long and thankfully slabbed section over to Black Hill. In good weather this was a lovely walk but in inclement weather we could imagine it would be pretty hostile and miserable - open to the elements but the slabs would make the transit easier. We reached Black Hill which is also known as Soldier's Lump - named after the Army Surveyors who first surveyed the hill many years ago. The hill is so named because the area surrounding the summit itself had virtually no vegetation and was very dark, giving the hill an appropriate name. However, recent restoration work has eliminated much of the exposed peat. 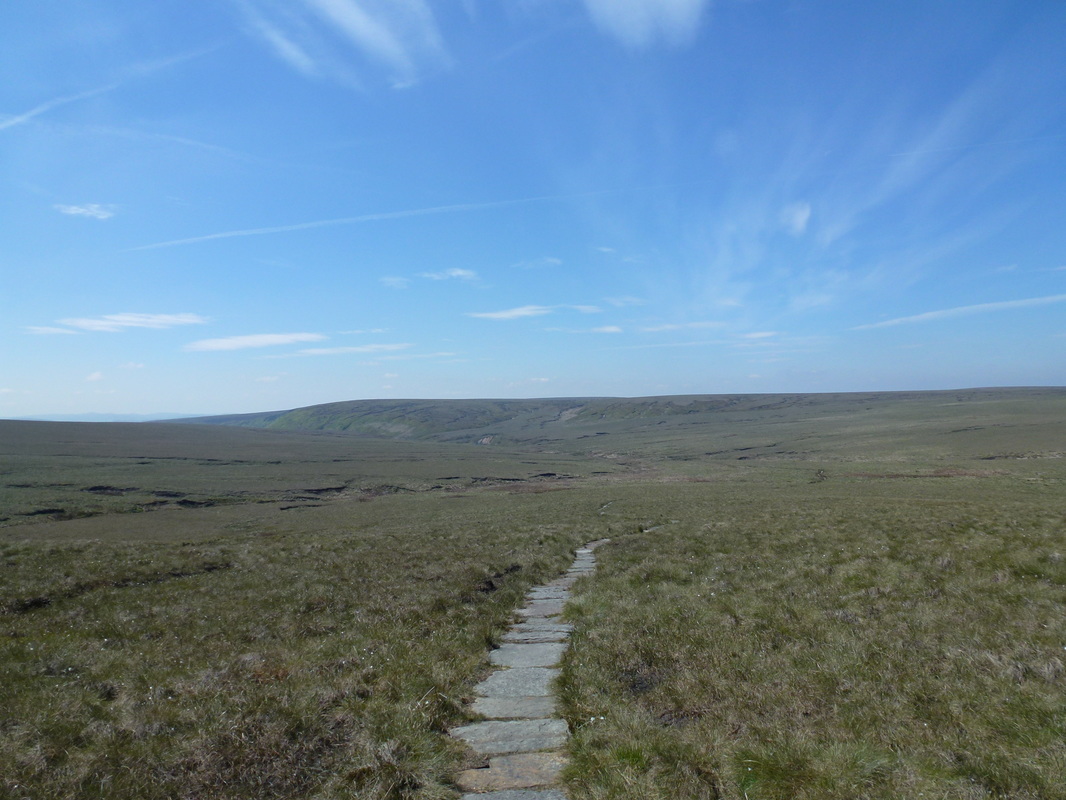 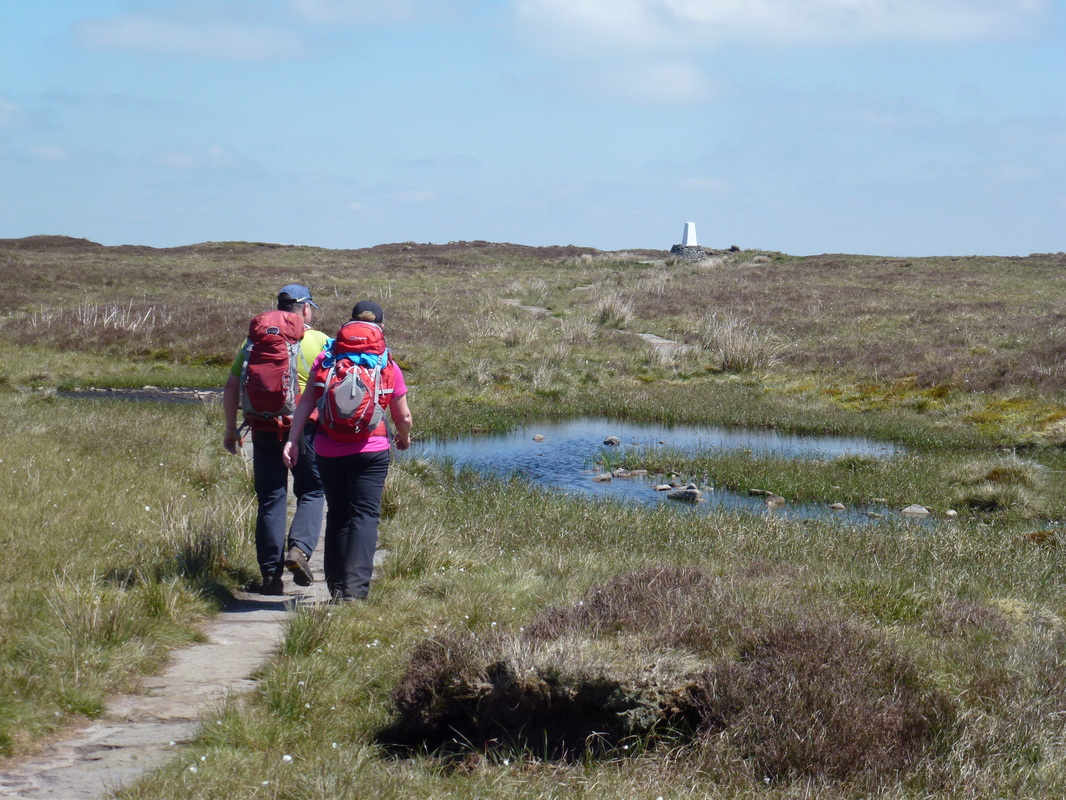 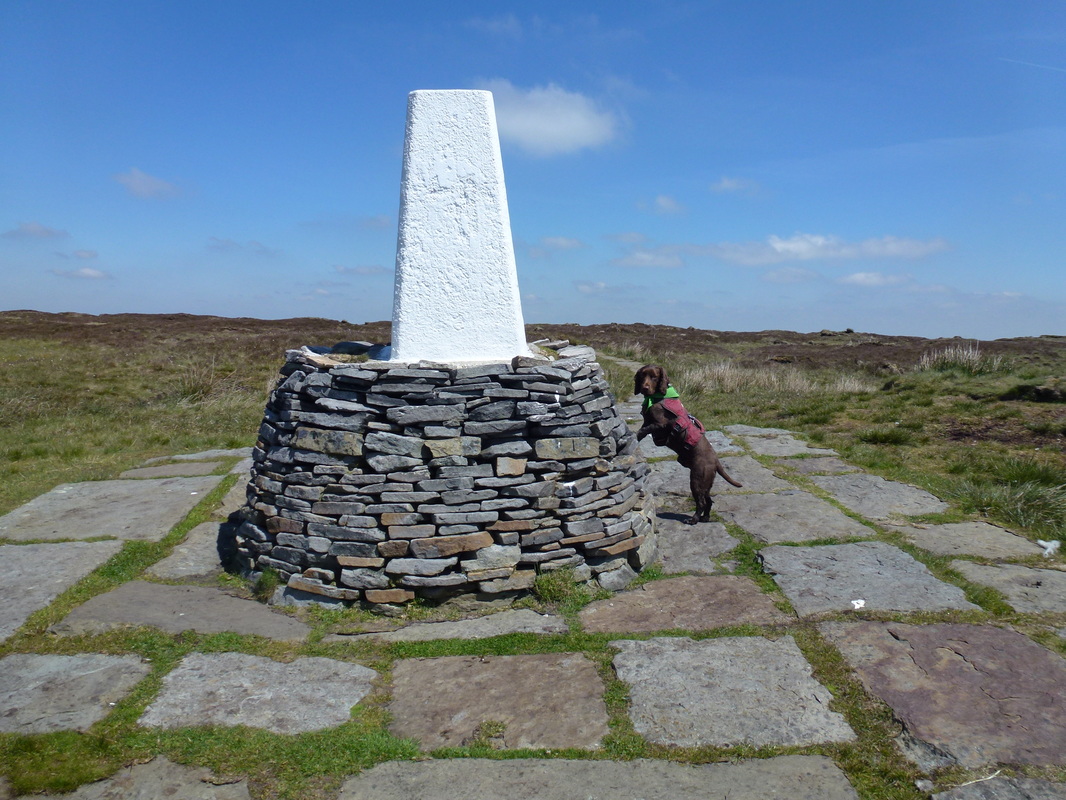 The summit of Black Hill (Soldier's Lump)
We had been posting updates of our walk on various Facebook pages and it was a big surprise to meet somebody on the descent of Black Hill that recognised us - well he recognised our dog Fudge first! - good to meet you Lee. The route continued to drop down to the A635 at Wessenden Head and we then crossed this busy road before turning left along the access track to Wessenden Head Reservoir to join the Kirklees Way. Reaching the Reservoir the track onwards to Wessenden Reservoir is a delightful amble and remains high above the water to reach Wessenden Lodge. Here there are a myriad of paths but the Pennine Way again was well signposted and we left the Kirklees Way to drop to the river before rising again to join the Marsden Moor Heritage Trail to Black Moss. 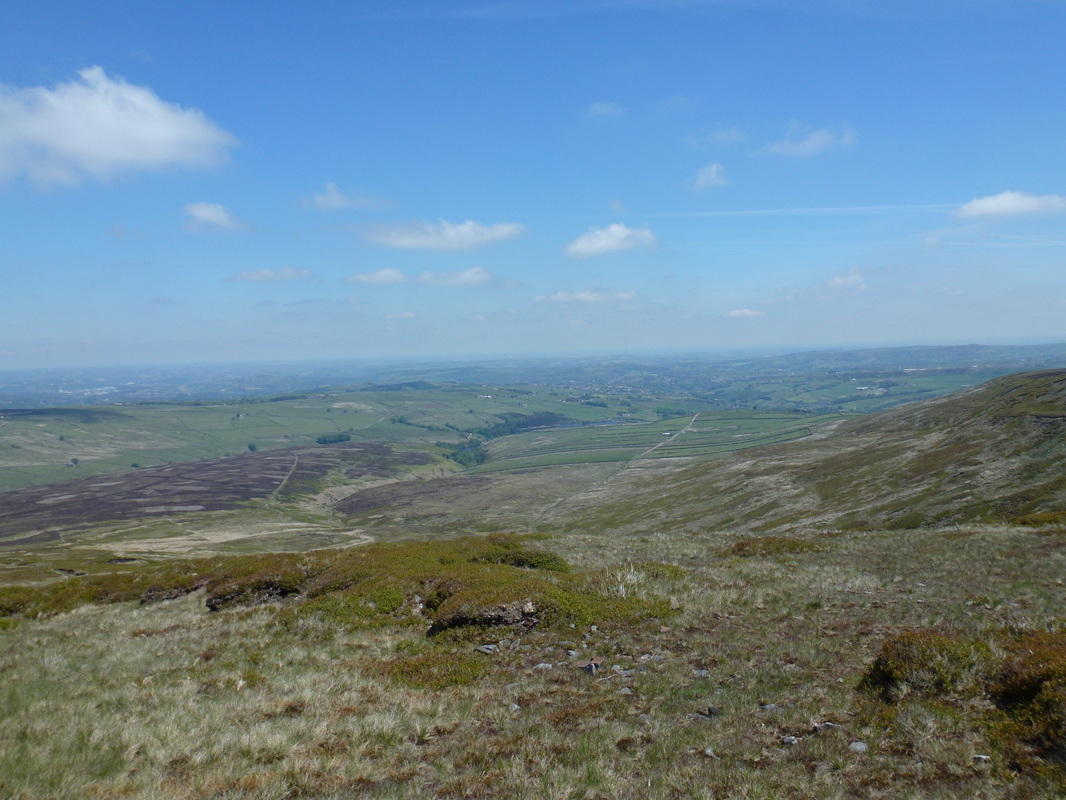 Heading off Black Hill towards Wessenden 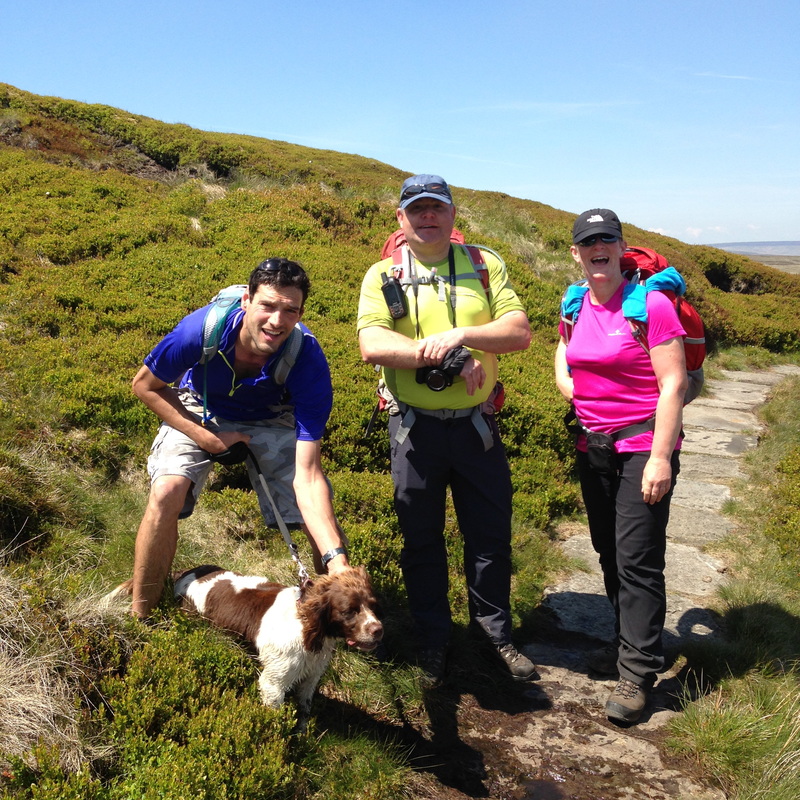 We met up with Lee Lord and Ollie who were out walking - Lee had seen our updates on Walking for Pleasure and recognised Fudge!! 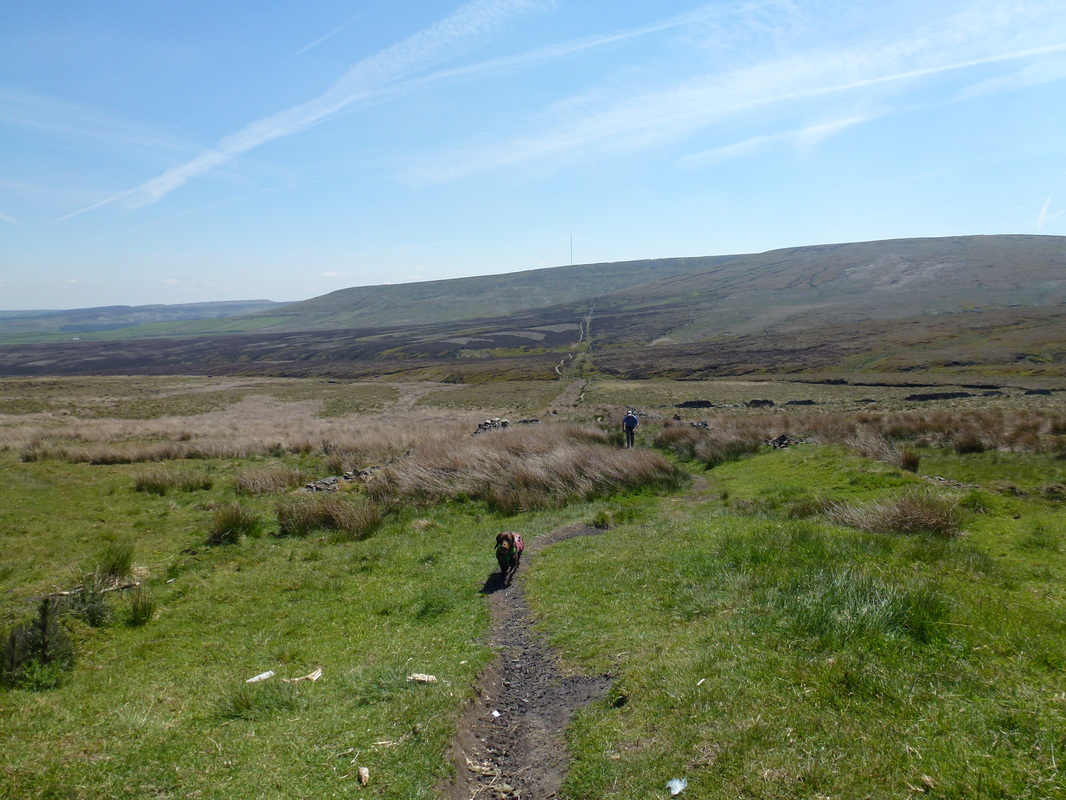 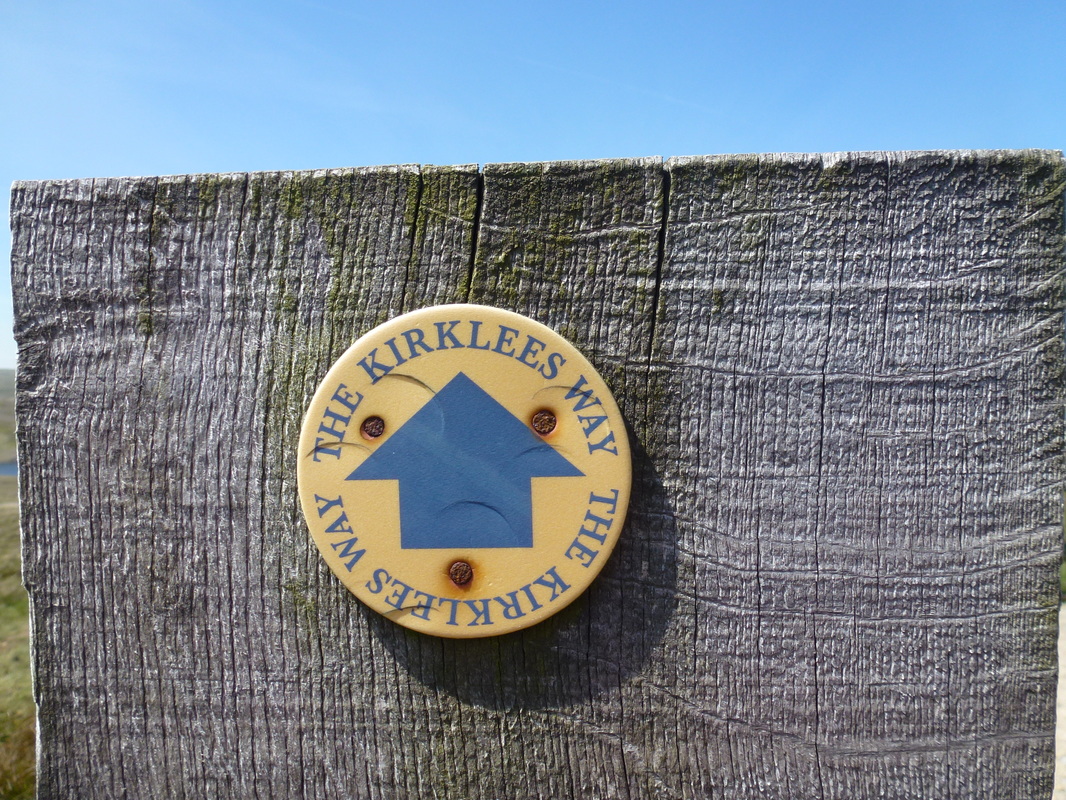 The route through Wessenden utilises The Kirklees Way 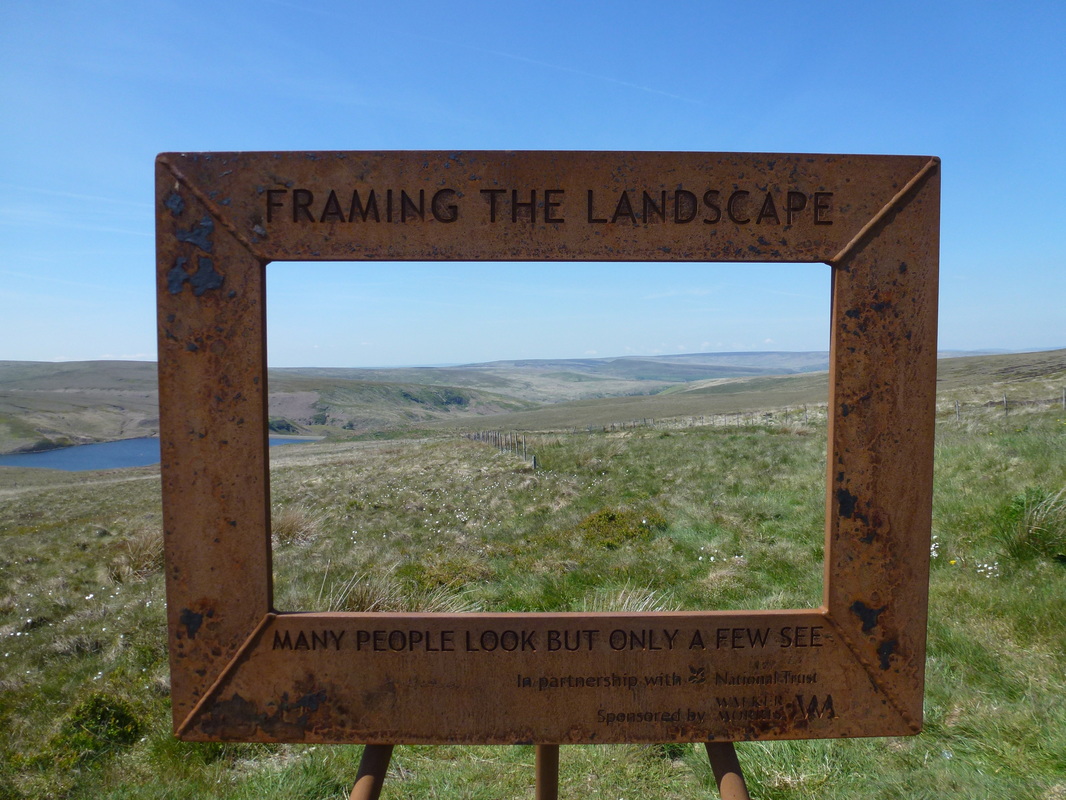 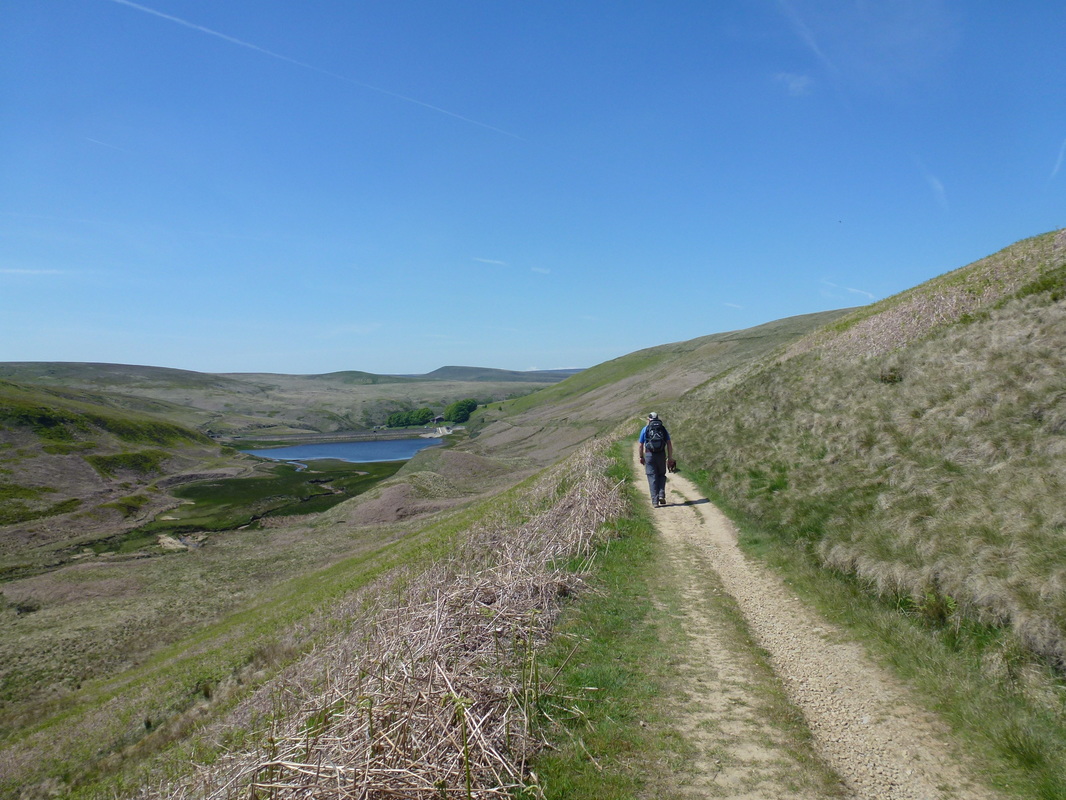 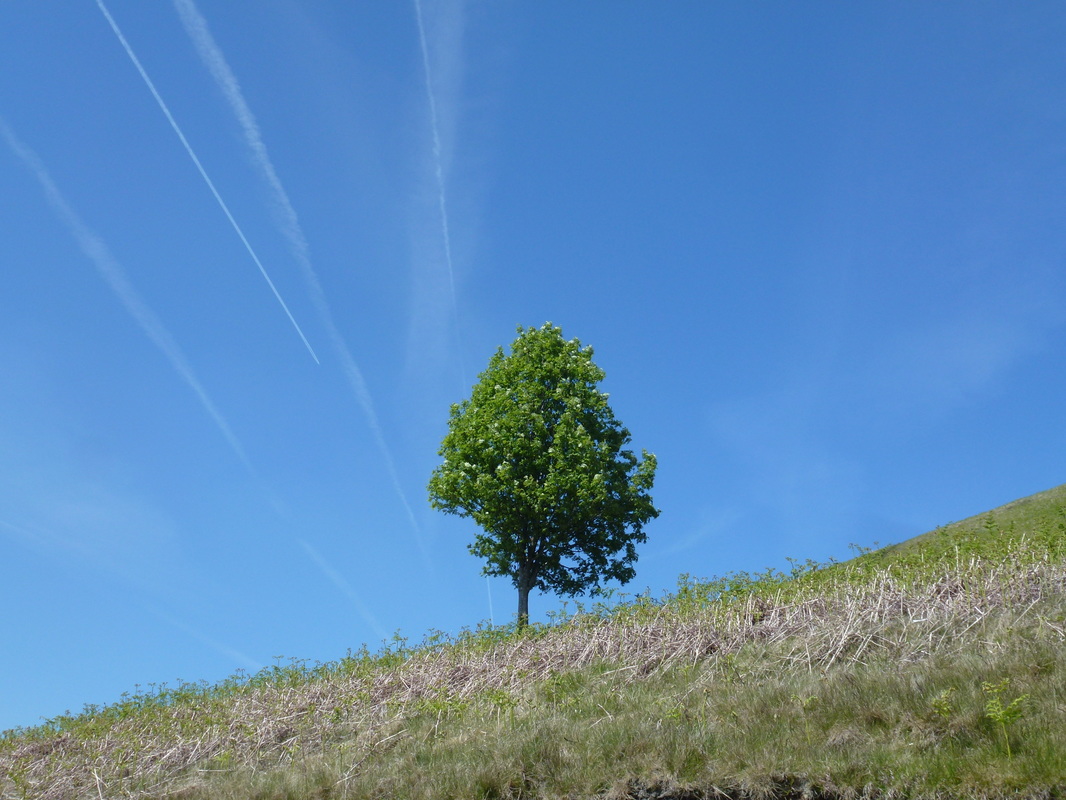 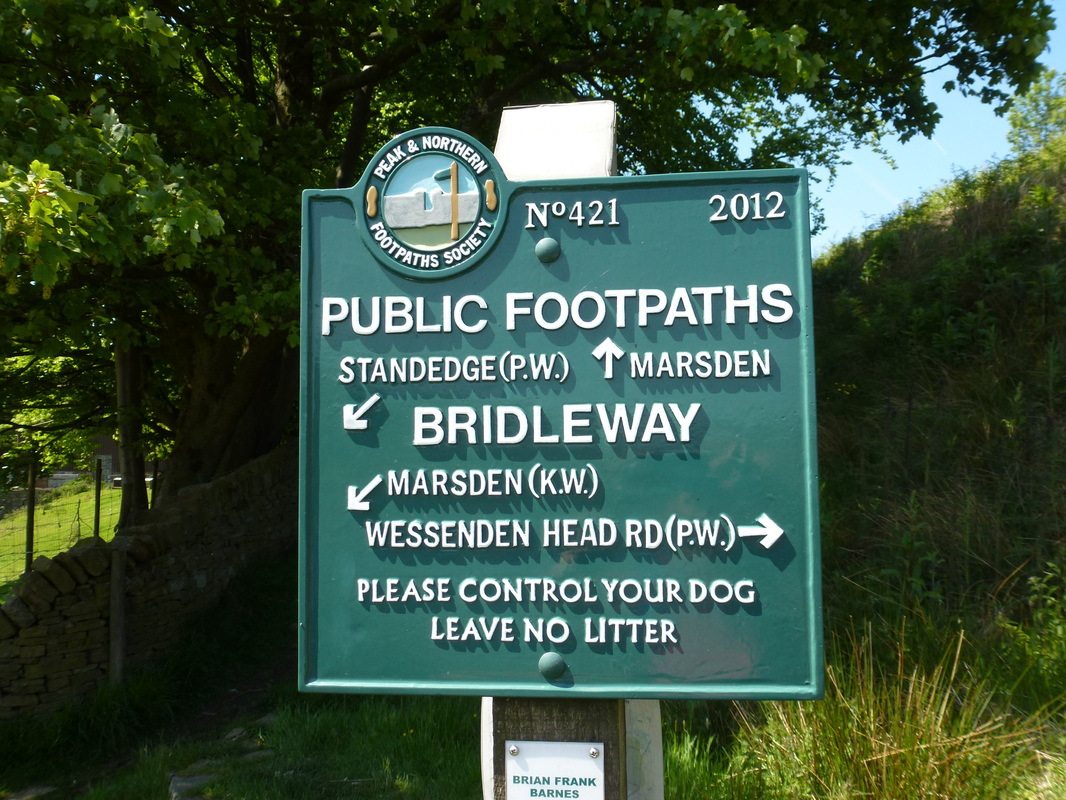 At Wessenden Head - we were heading for Standedge 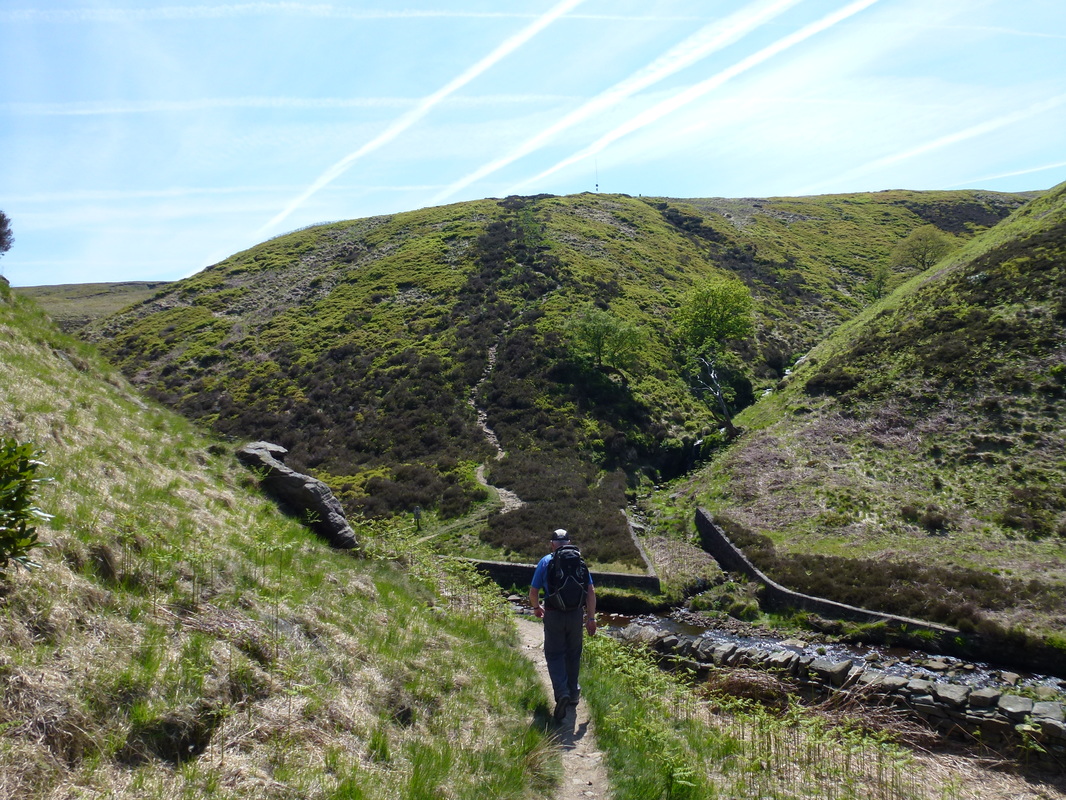 The Pennine Way heads west on the path to Black Moss - we were heading up the path straight ahead - Fudge is already in the river below! 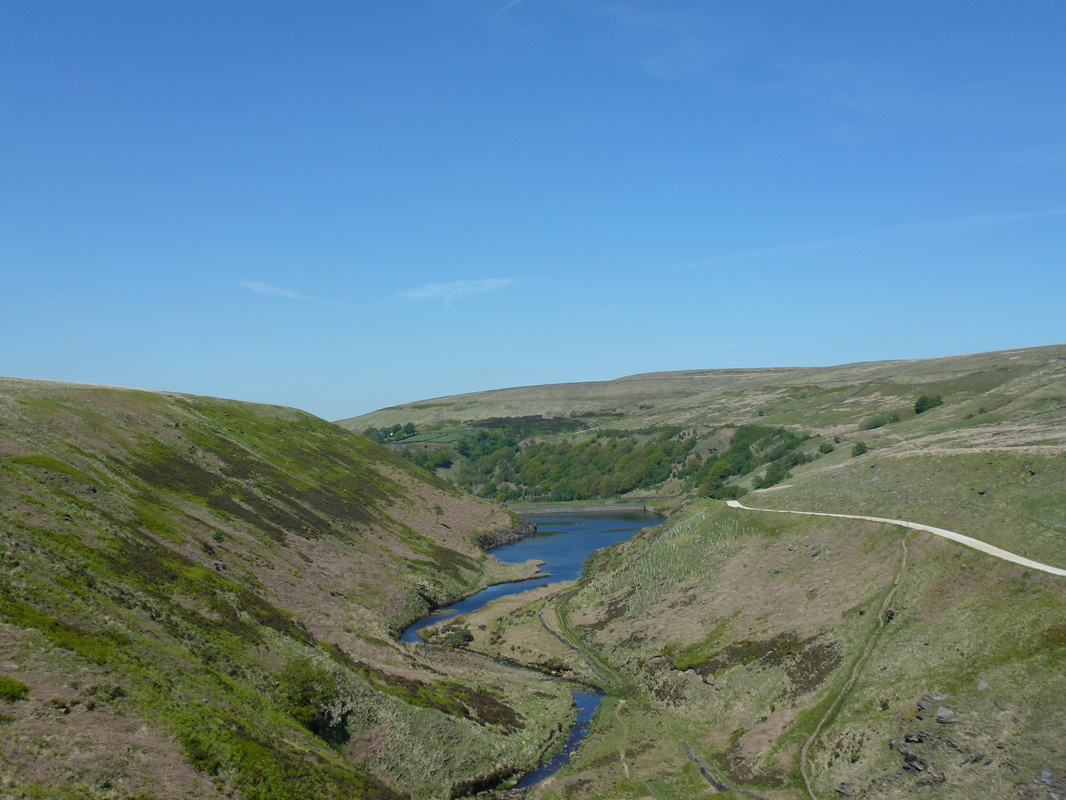 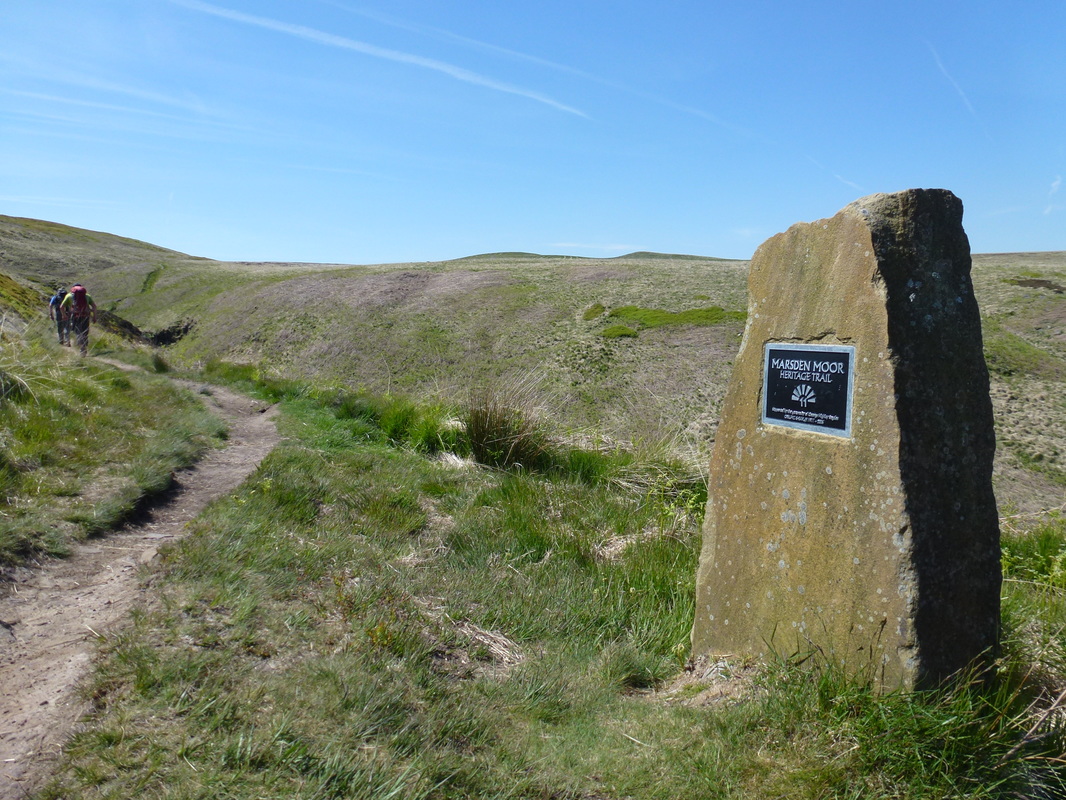 Continuing on to Black Moss which is on the Marsden Moor Heritage Trail
The walk to Black Moss is another delightful stretch as we hand railed Blakeley Clough to pass between Black Moss and Swellands Reservoirs. At the far end of Black Moss Reservoir we turned to the right to head down towards another Reservoir - Redbrook and with it our first view of the Standedge Cutting - dug out in 1839 in order to provide a level turnpike between Oldham & Huddersfield. At the Marker Stone we met up with Mrs Chips and together we headed down to the A62 at Brun Clough Reservoir. Crossing the A62 it was now a question of heading half a mile off route to reach our B&B in Delph. Having showered and changed, Team Chips ferried us to the White Lion in Delph where all 4 of us ate and drank our own body weight in Pizza and Real Ale. 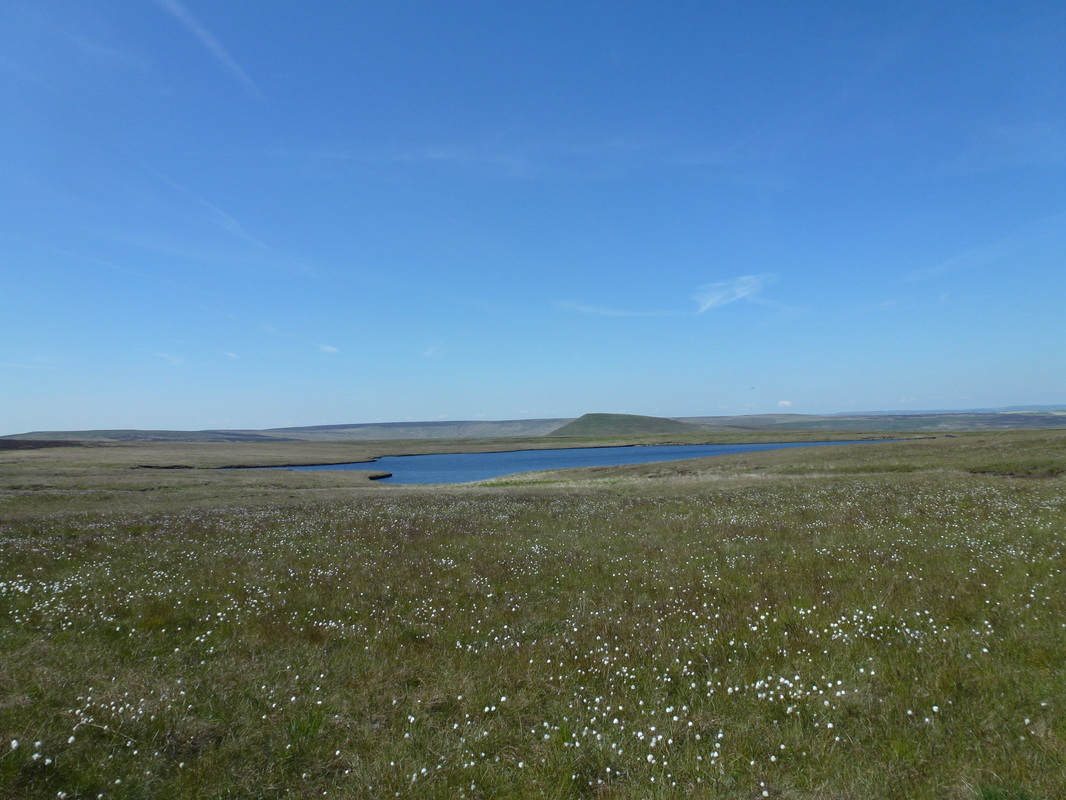 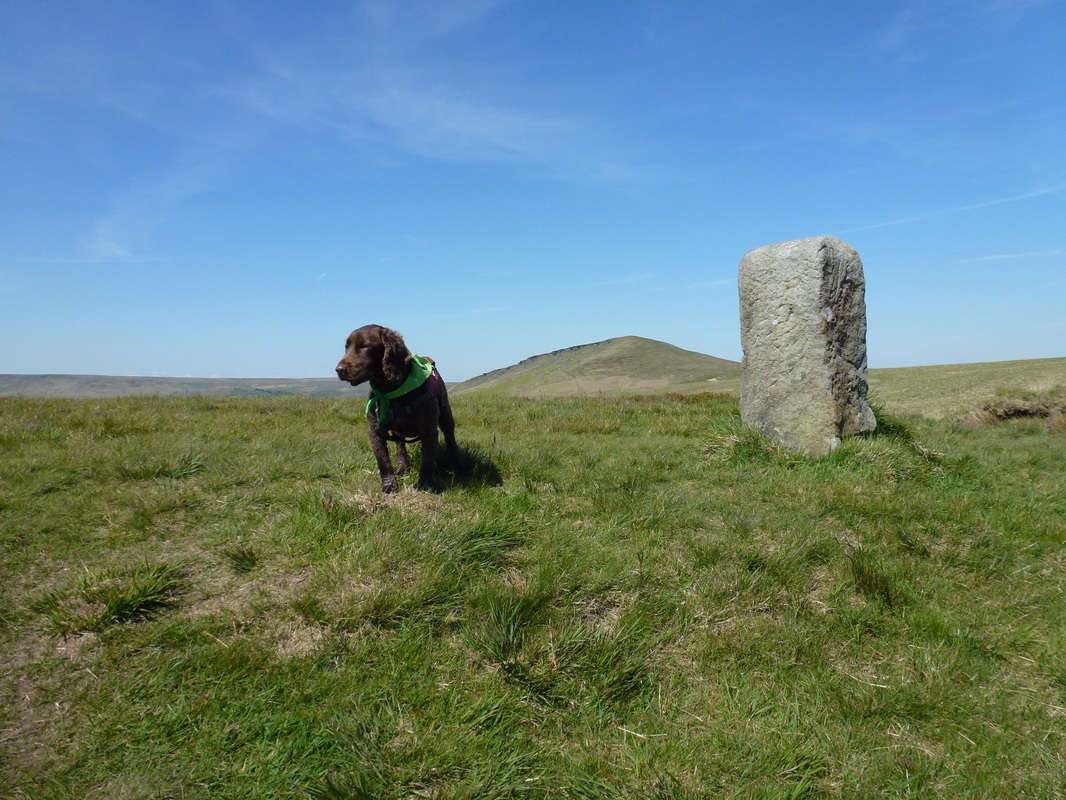 The Marker Stone at Redbrook Reservoir near Standedge - Pule Hill behind 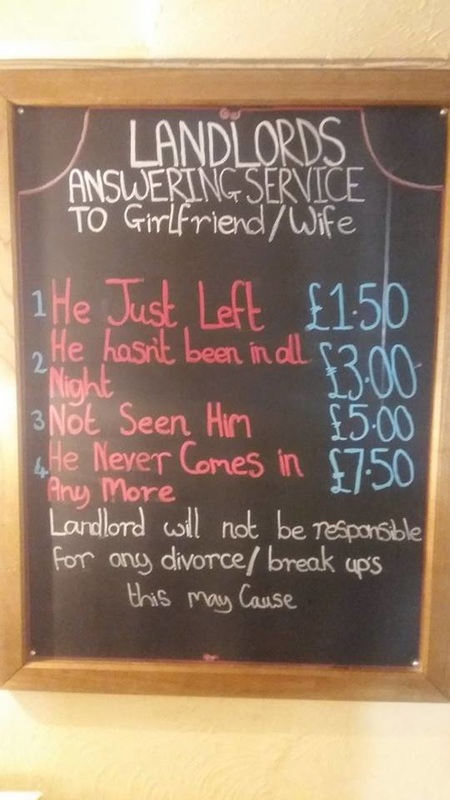 White Lion in Delph - a pub with a sense of humour. The Pizza menu was written on an old piece of cardboard!
Today was a delightful walk - full of interest and yet to some it may appear a tad sterile, what with lots of man made tracks and reservoirs but there is still a lot to see and enjoy, particularly in the earlier part of the route.​
Overnight Accommodation​ 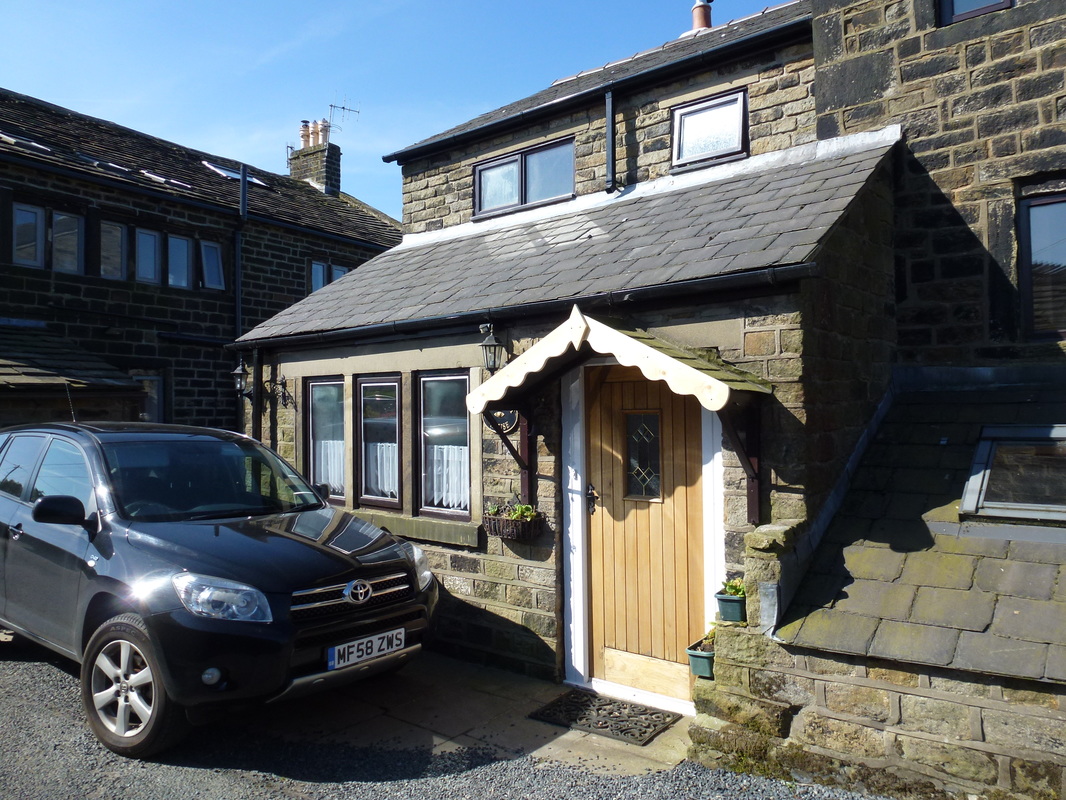 About half a mile off the route, this was an average B&B which is currently up for sale. We ate out that night at The White Lion in Delph which does great Pizza.​
Day 2 Data