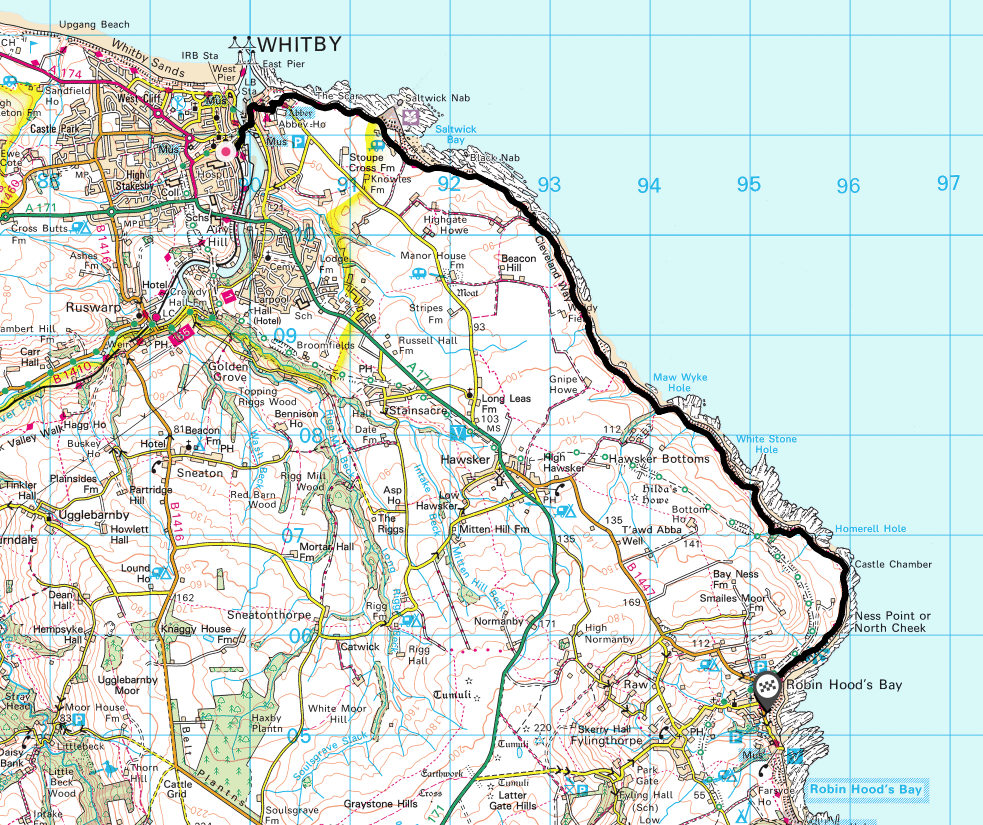 Another short day today however we would have all our gear with us once again as tonight we would be moving accommodation to Scarborough. The Runswick Bay Hotel was a means to an end - comfortable and serving our needs over the 4 days we stayed there. Looking out of the window at Breakfast revealed sunshine which boded well as we knew from our Coast to Coast walks in 2012 & 2016 that the latter part of this section is delightful in good weather. As is customary, we gave our dog Fudge a check over and discovered a tick on one of his paws therefore after a quick bit of doggy surgery he was good to go. Ticks are a pain in the backside, particularly at this time of year therefore it is wise to check both yourselves and your pooches on a daily basis.

We caught the 1000 bus into Whitby and on arrival it was abundantly clear that the town was already heaving with people going about their business. From the harbour the route headed up the 199 steps to firstly visit St Mary's Church and then pass Whitby Abbey. Whilst at the Abbey, the weather conditions changed in an instant - sunshine was replaced by cloud and remained so for the remainder of the day. From the Abbey grounds the path was busy with people enjoying a mid morning stroll but once we arrived at Saltwick Bay the crowds petered out to just the odd walker.

At Saltwick Bay the path turned inland for a short while and headed through the holiday park which fortunately for us had a very good cafe and after being suitably refreshed we headed out on to the clifftop path once more to make our way along another really lovely section of walking. At Maw Wyke Hole the Cleveland Way meets the Coast to Coast coming in from Hawsker and we were therefore now back on familiar territory as we continued south east to round Ness Point to arrive at the picturesque village of Robin Hood's Bay.

From the top of the village there is a steep descent to the harbour which we would walk tomorrow - coming back up with a full rucksack did not appeal to us therefore we parked ourselves in the beer garden of The Victoria Hotel for a drink in order to kill time before we could catch our bus to Scarborough. On arrival in Scarborough we were treated to a 20 minute walk to our B&B and on arrival at The Beaches we settled in for what would be a 5 day stay. After a bit of a sort out of kit & admin we wandered down to North Bay and enjoyed a very pleasant meal in The Blue Crush Bar. 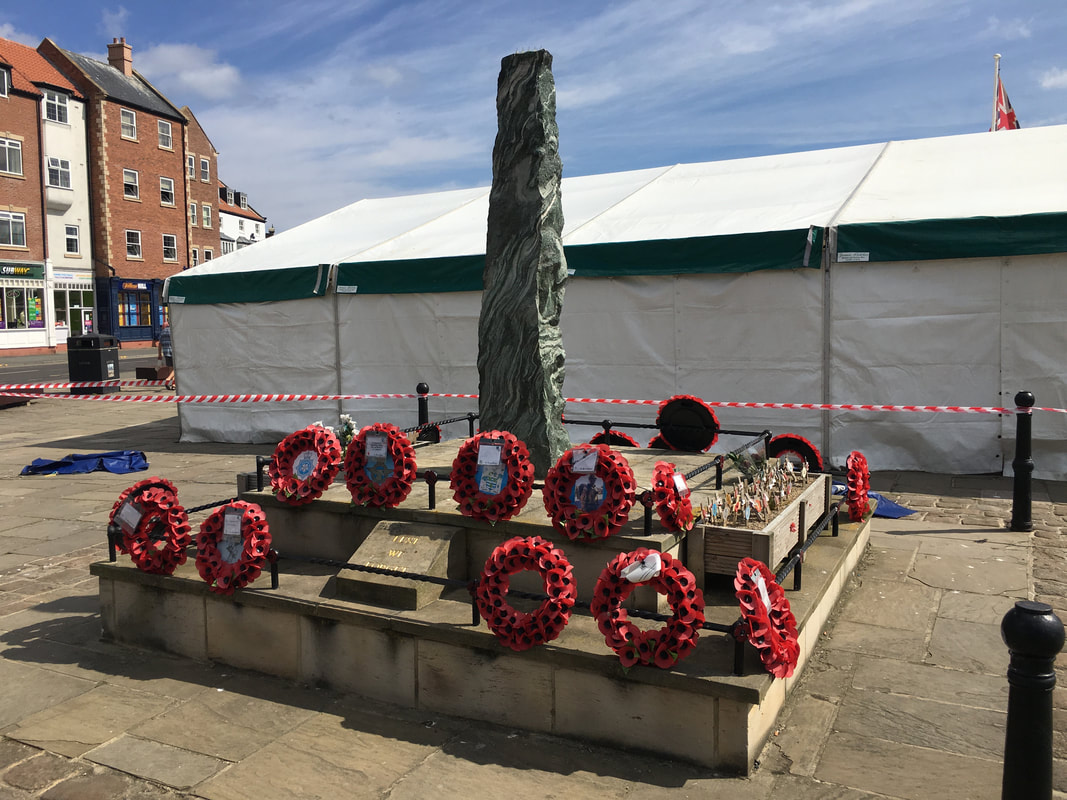 The War Memorial in Whitby 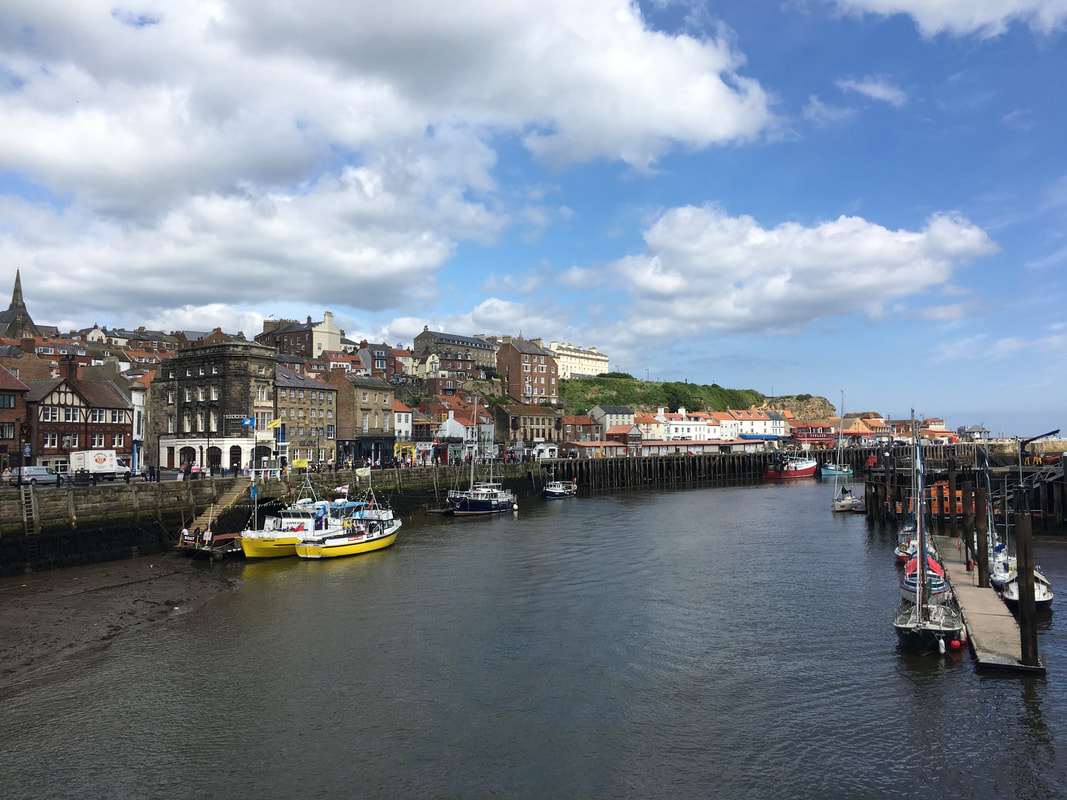 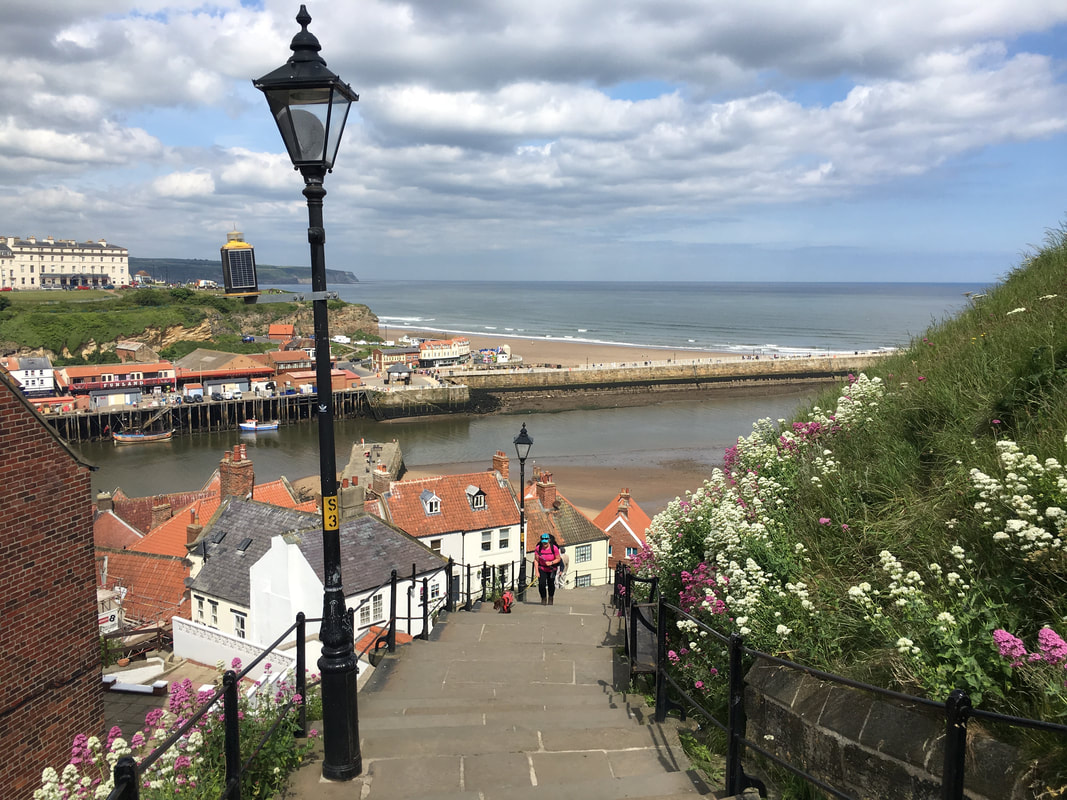 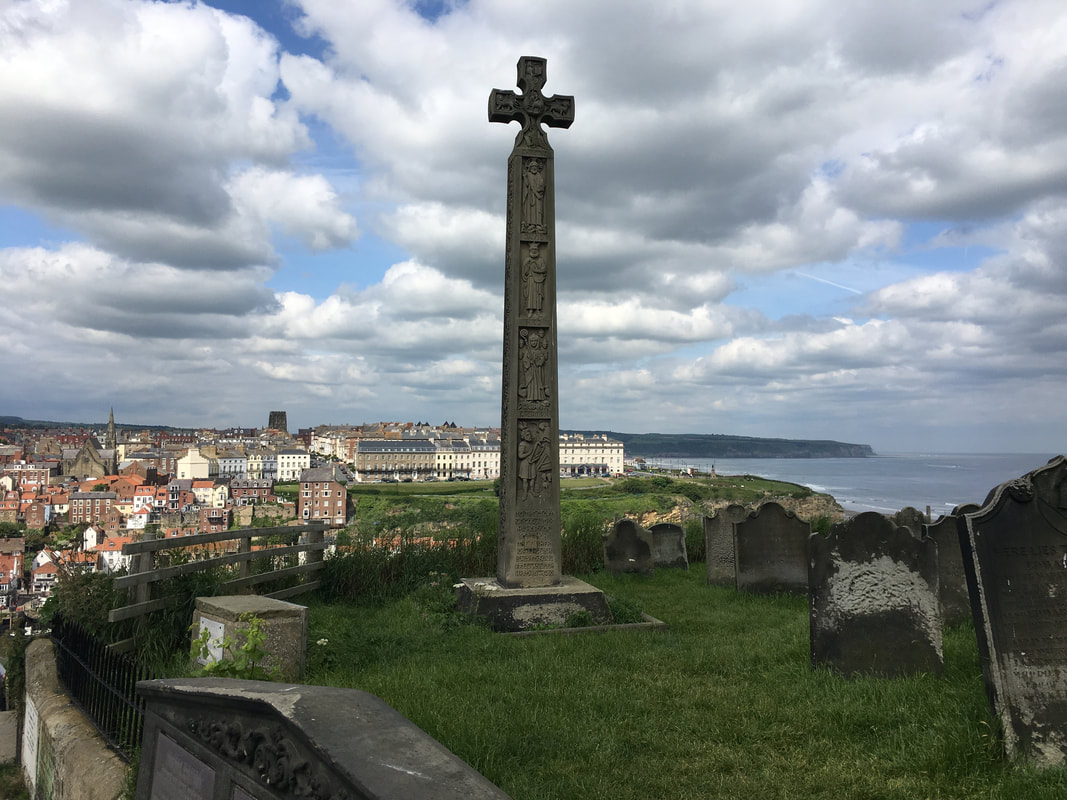 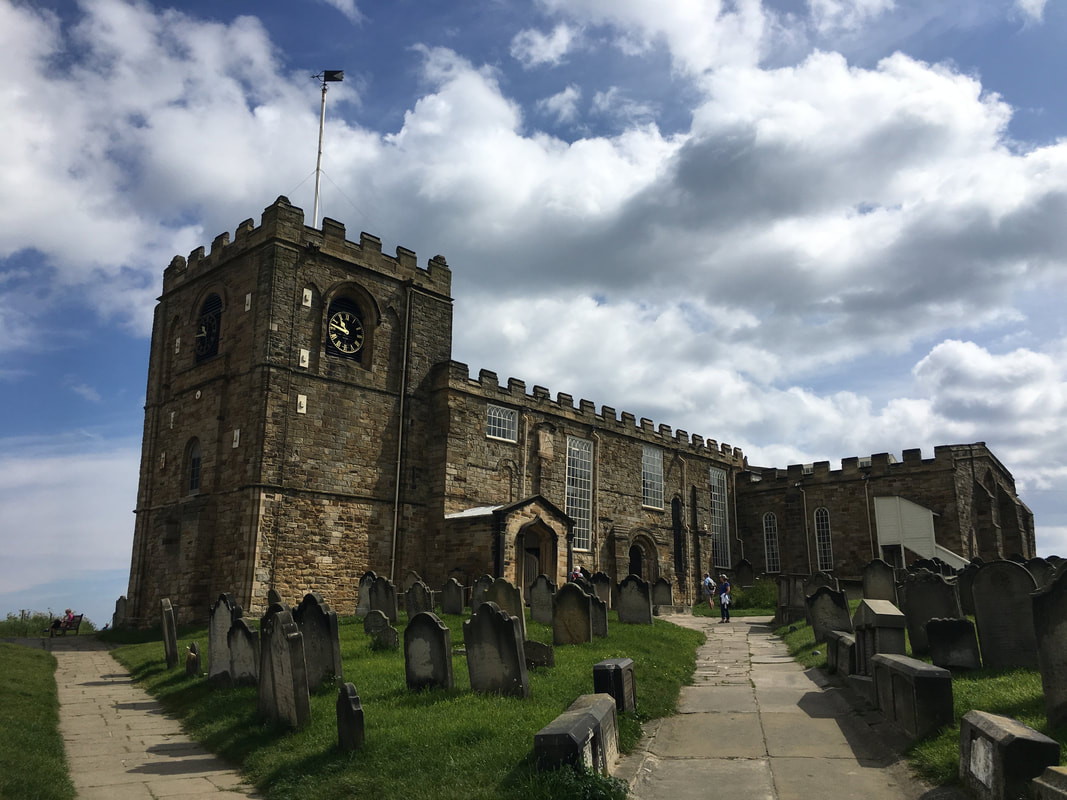 St Mary's Church near Whitby Abbey - the church is situated at the top of the 199 steps and is said to have been founded in 1110
Bram Stoker used St Mary's Church graveyard as the setting for a scene in his novel, Dracula:
​
"For a moment or two I could see nothing, as the shadow of a cloud obscured St. Mary's Church.  Then as the cloud passed I could see the ruins of the Abbey coming into view; and as the edge of a narrow band of light as sharp as a sword-cut moved along, the church and churchyard became gradually visible... It seemed to me as though something dark stood behind the seat where the white figure shone, and bent over it.  What it was, whether man or beast, I could not tell." 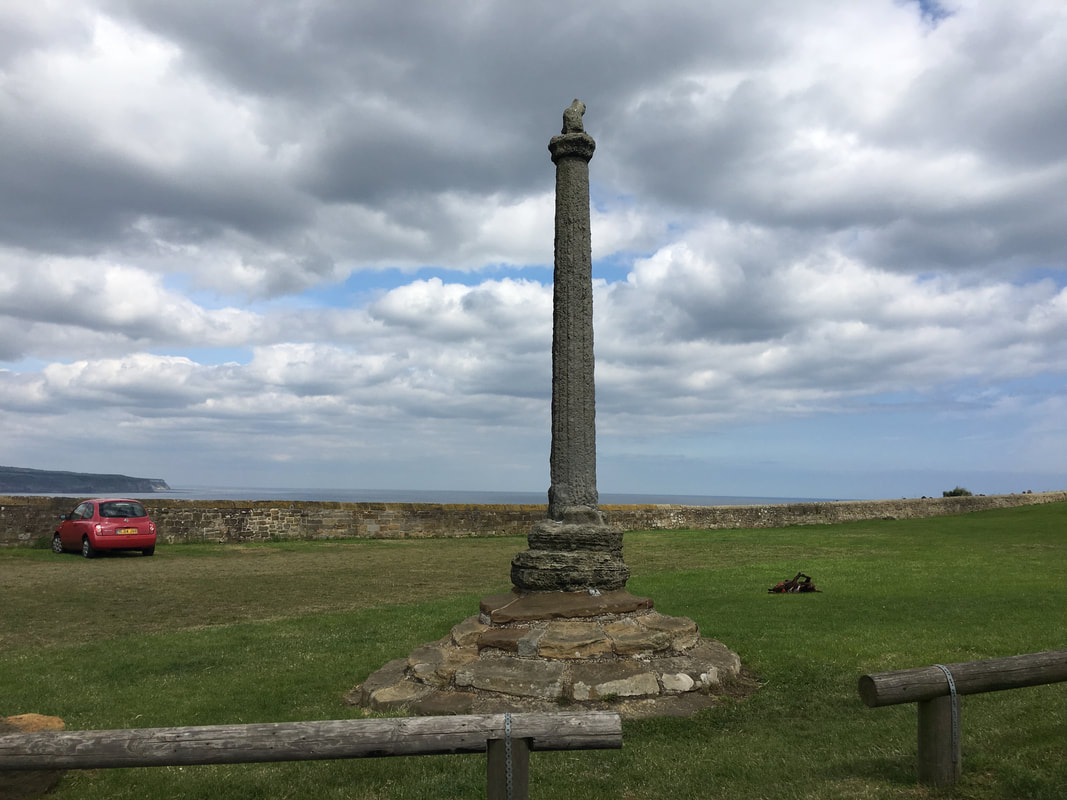 The weathered (or mutiliated) cross near Whitby Abbey
Having no respect for tradition or medieval artefacts, Fudge takes it upon himself to arse about for a bit. 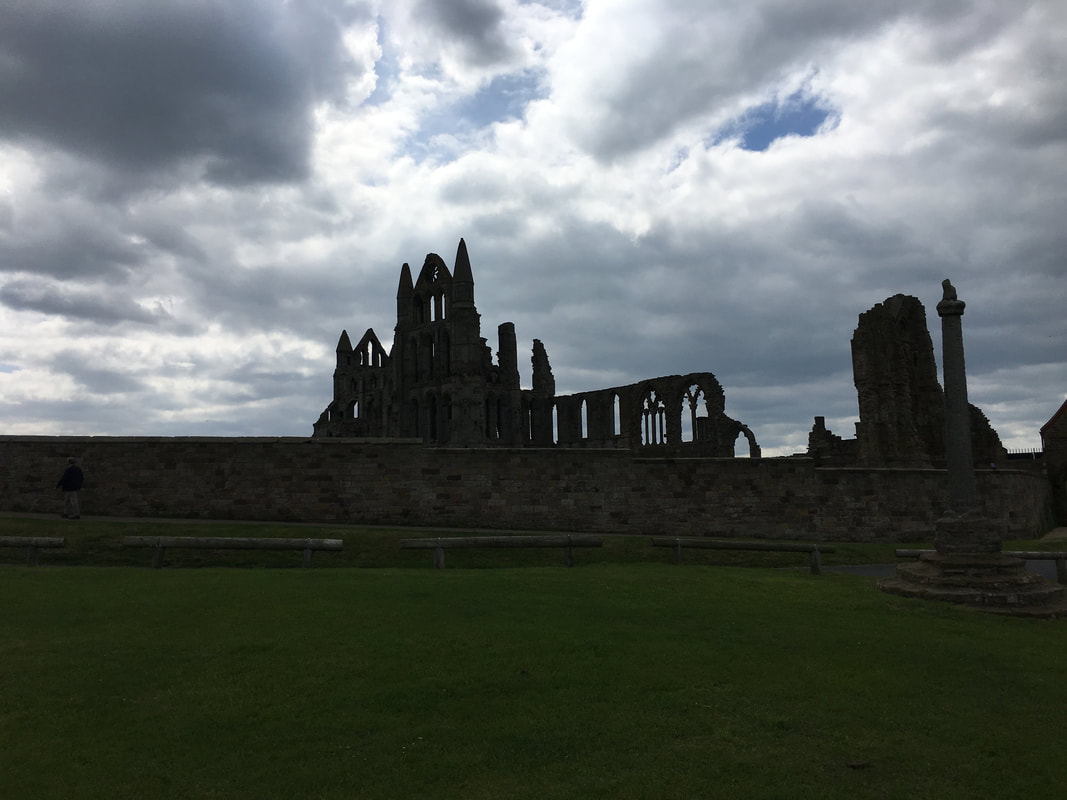 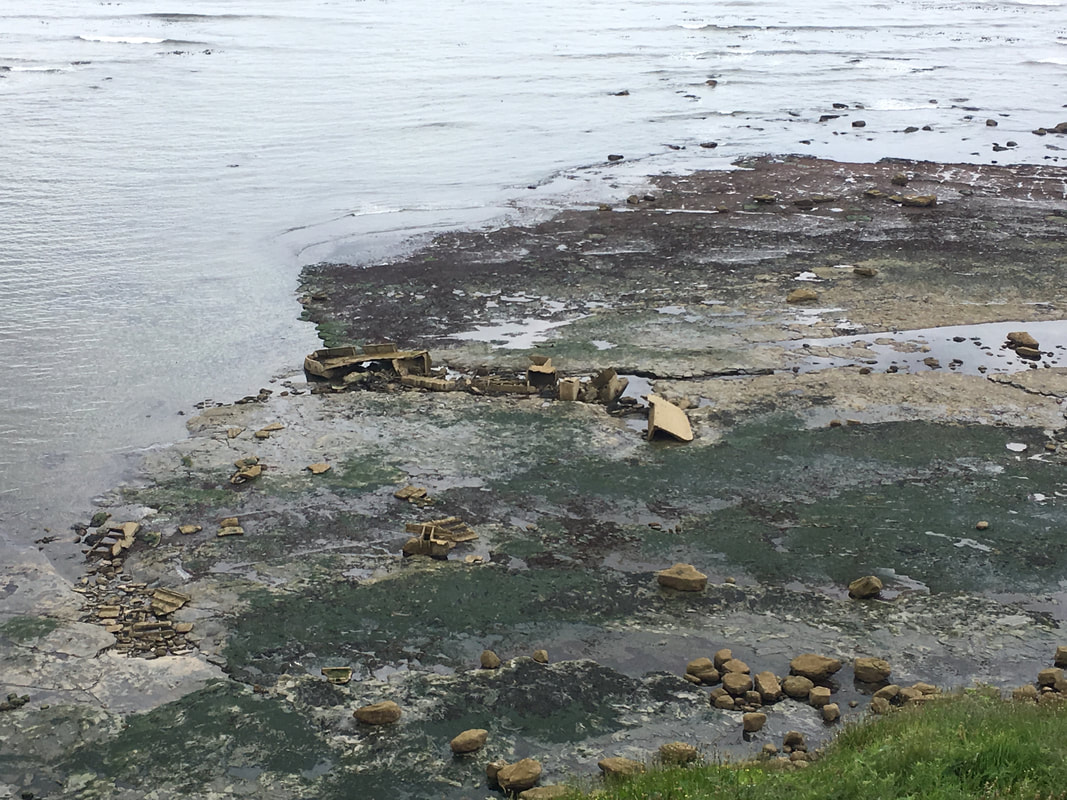 The wreck of the Scarborough based trawler Admiral Von Tromp in Saltwick Bay near Whitby.
​
The October 1976 sinking of the Admiral Von Tromp appeared at first to be a mundane yet tragic tale of a trawler caught out in fog and wrecked on rocks, in this case the infamous Black Nab.  But this event, which resulted in the deaths of two sailors, was overshadowed by a mystery that has long perplexed those who know of it – how the Admiral Von Tromp came to be wrecked in the first place.  For the vessel, which was equipped with modern navigation equipment, should have been nowhere near land when it foundered.  Yet it was found to have been 90 degrees of course heading due west, straight into the worst rocks the rugged North Yorkshire coast could throw at it. 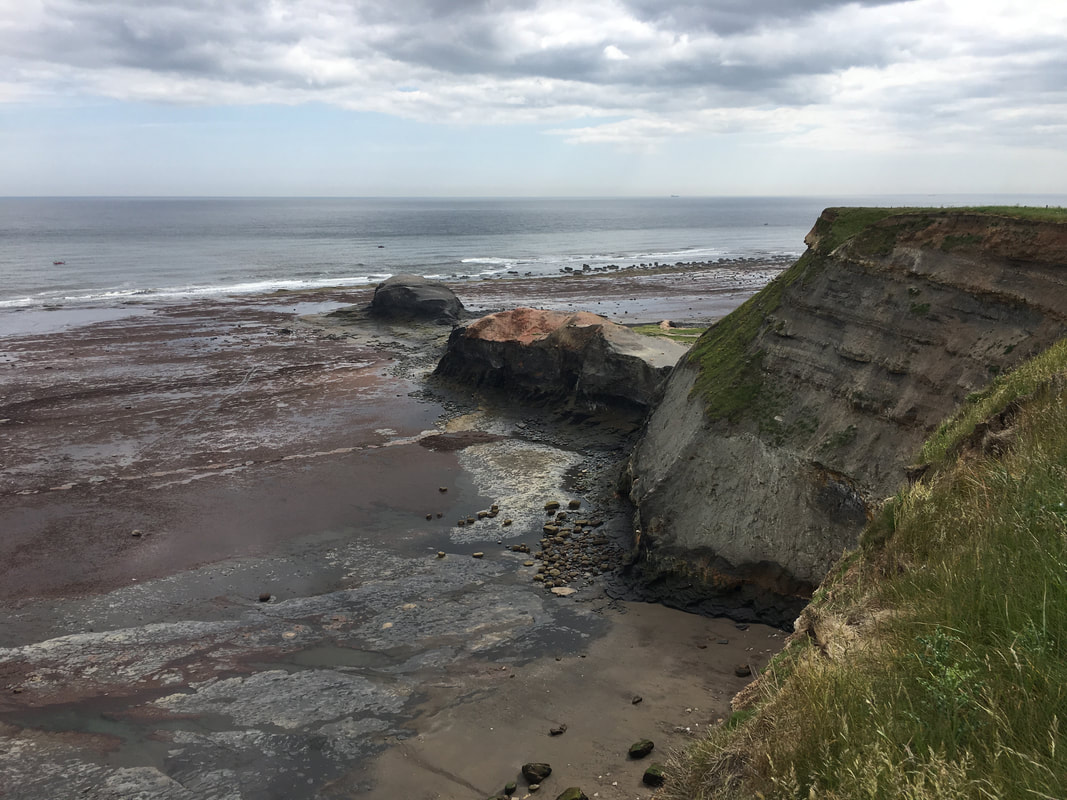 The rocky headland at Saltwick Bay 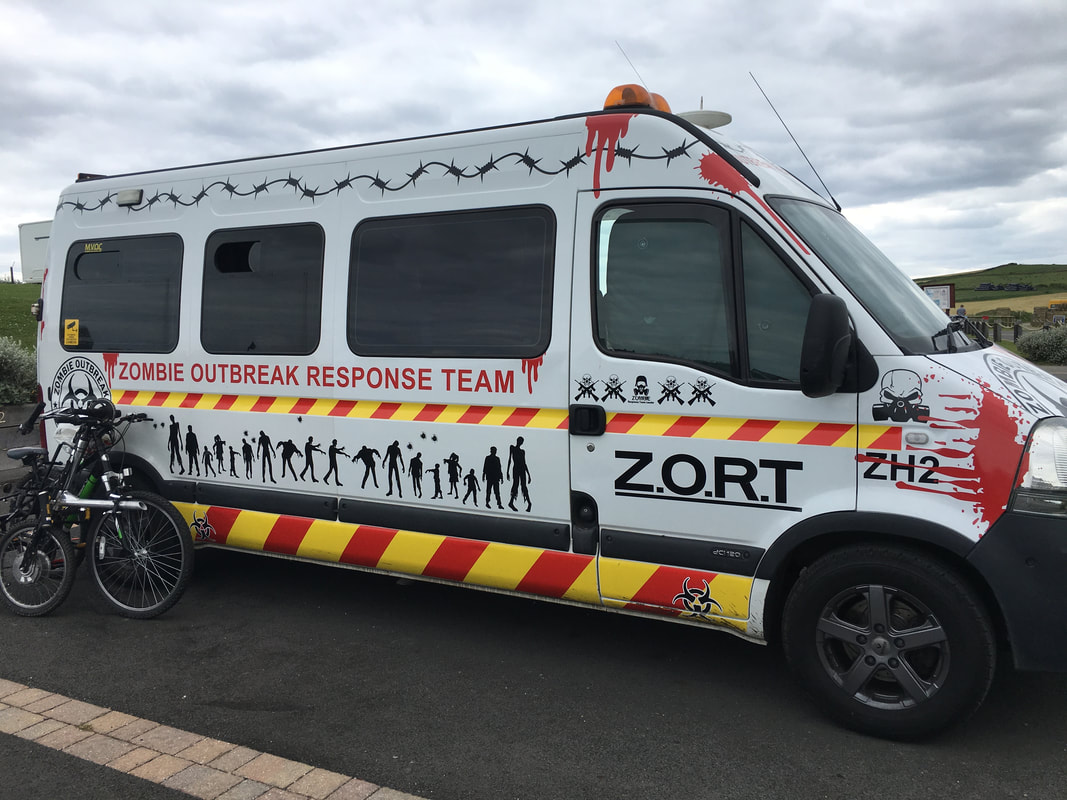 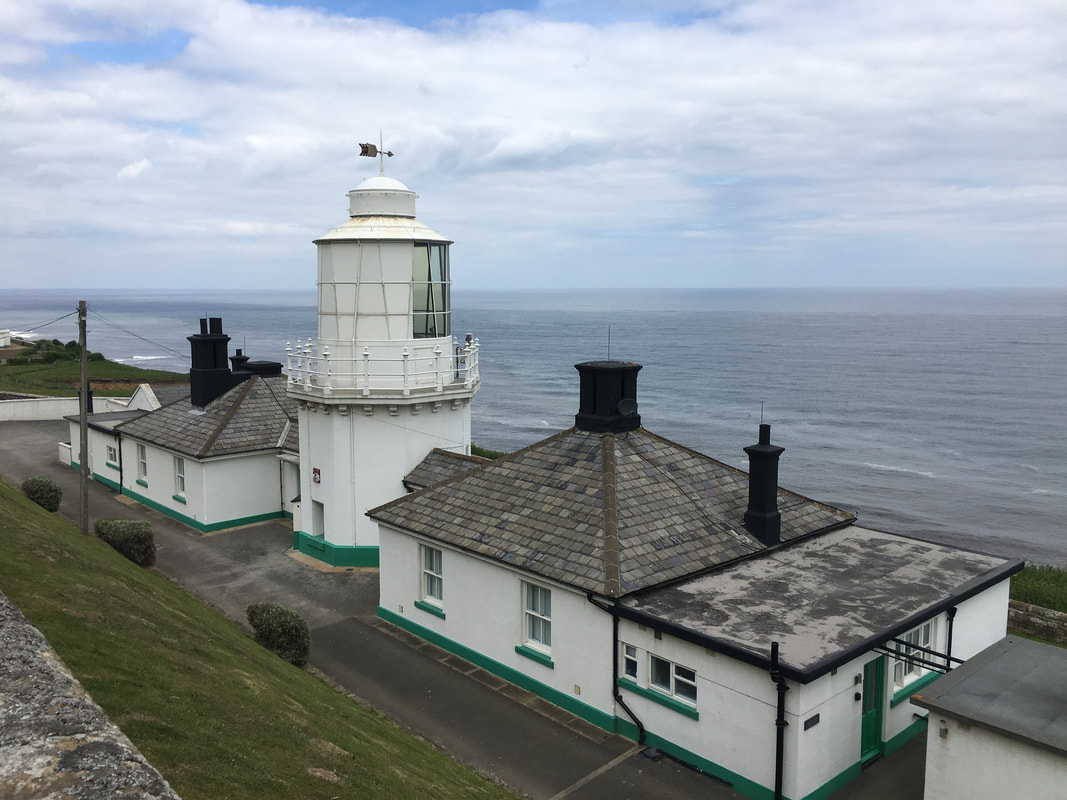 Whitby Lighthouse on Ling Hill near Saltwick Bay.
Whilst the lighthouse is still active, the buildings are now used as holiday cottages 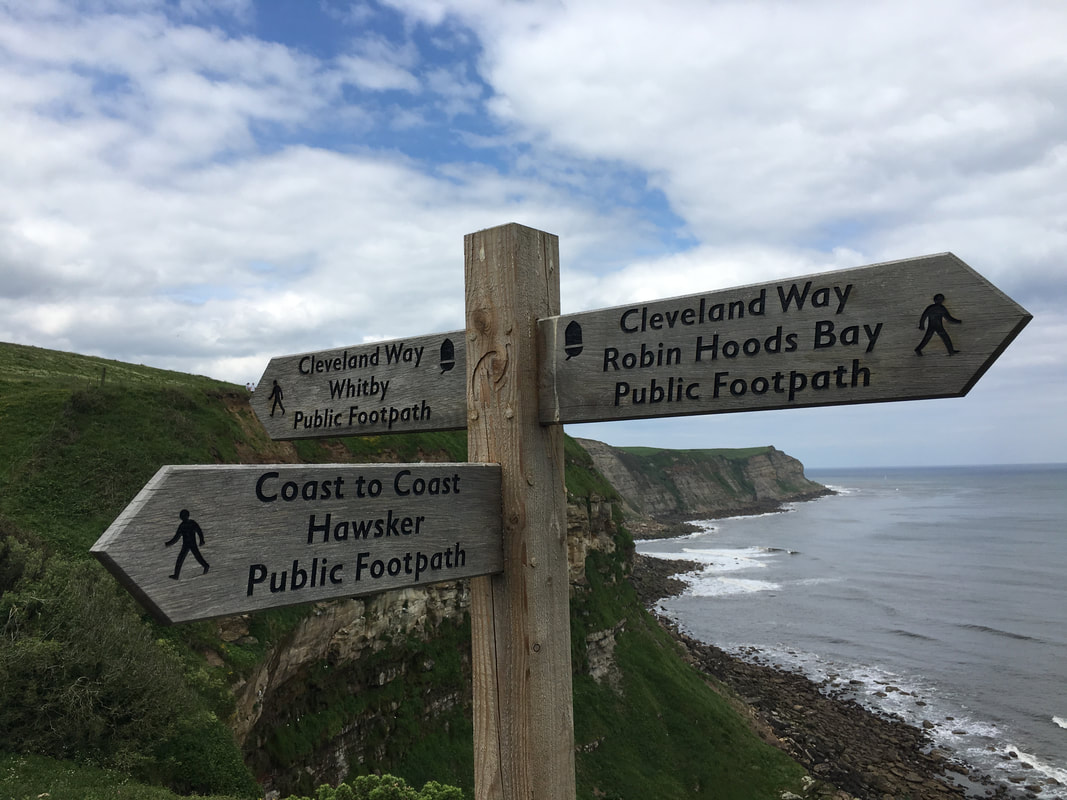 Near Hawsker, the Cleveland Way meets up with the Coast to Coast walk.
We were now back on familiar ground having walked the C2C in 2012 & 2016 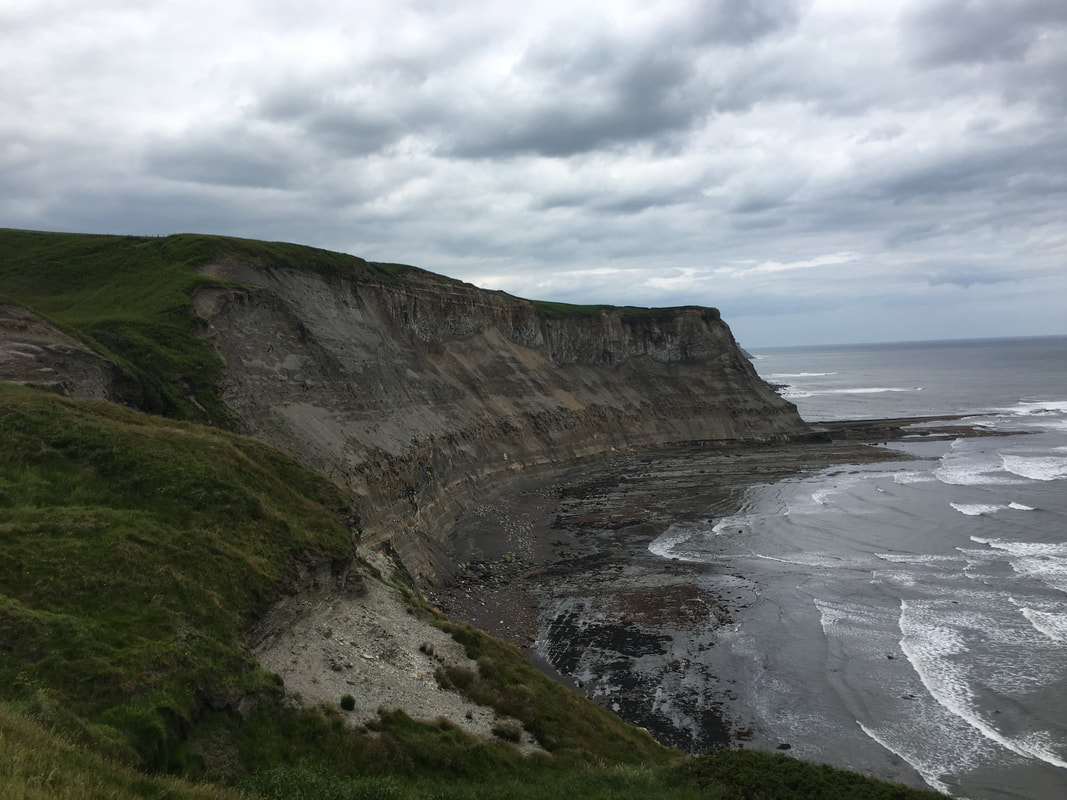 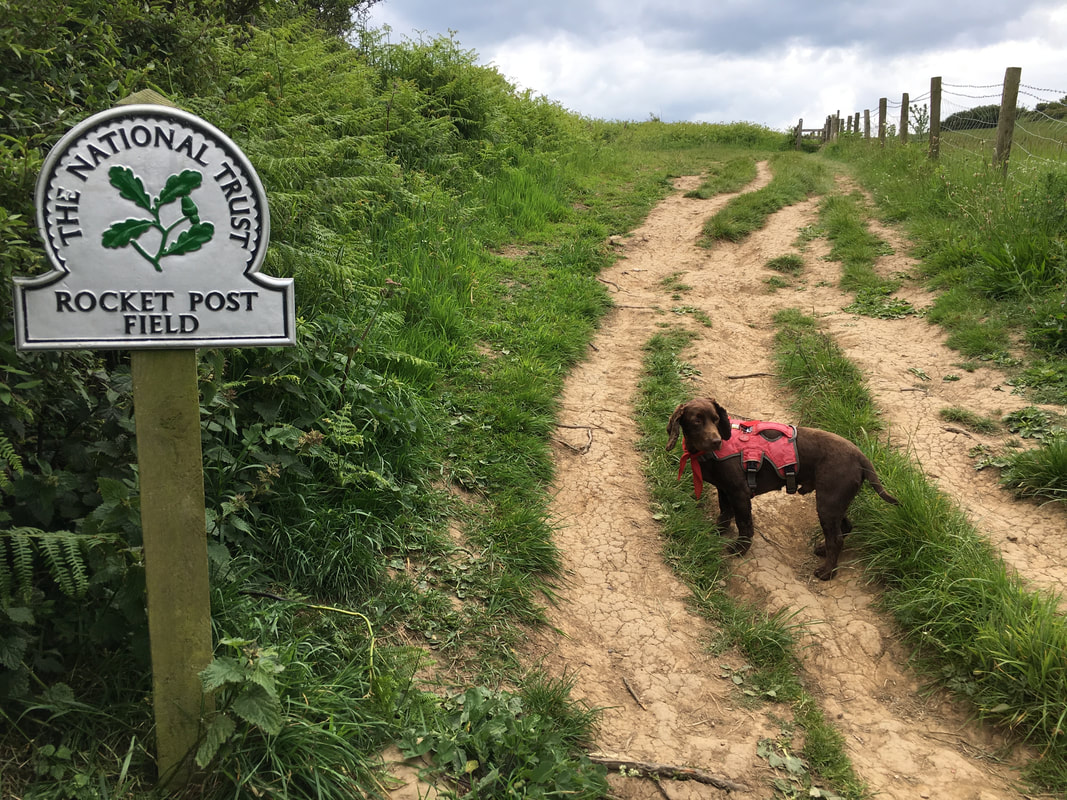 Rocket Post Field near Robin Hood's Bay - I am sure Fudge is wondering why it is called that. 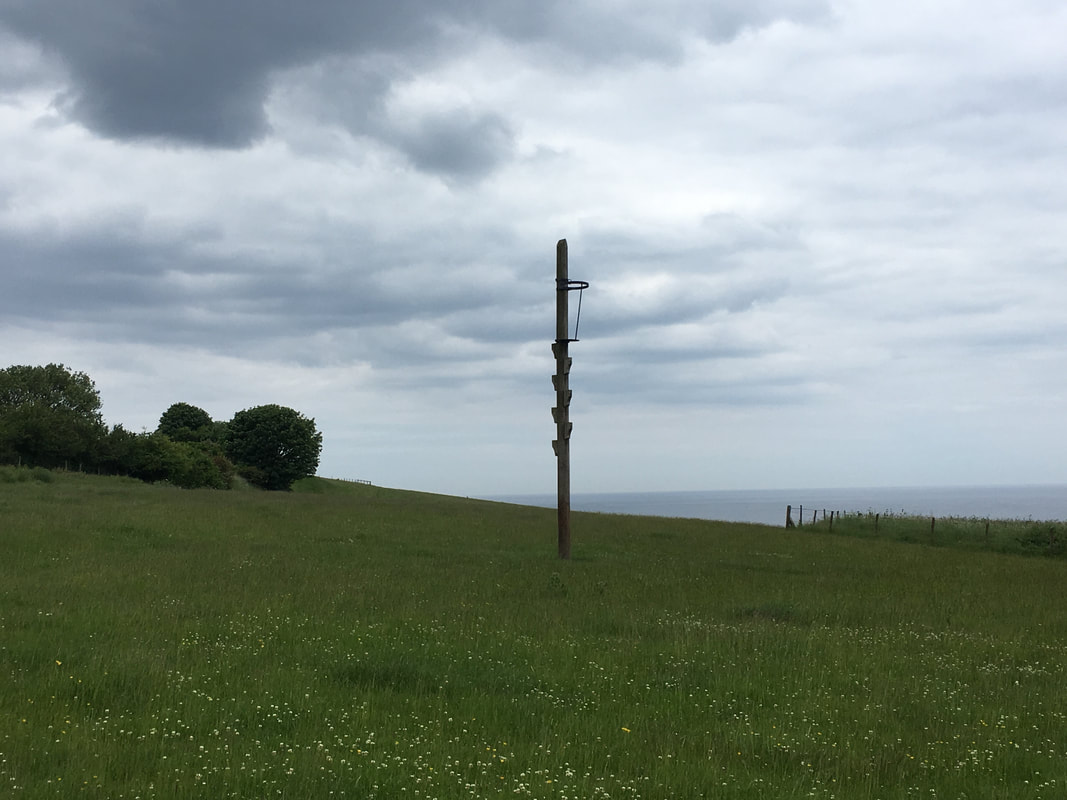 Ah - that's why!
The post in the field is a replica of the one that was once used to practice cliff rescues.  A rocket with a rope attached was fired from the post to a stranded ship, and the survivors would then return to safety via the ‘breeches buoy’ – a pair of large canvas shorts and a lifebuoy hanging from the rope. The crew of the steam cargo ship Heatherfield was rescued in this way in 1936. 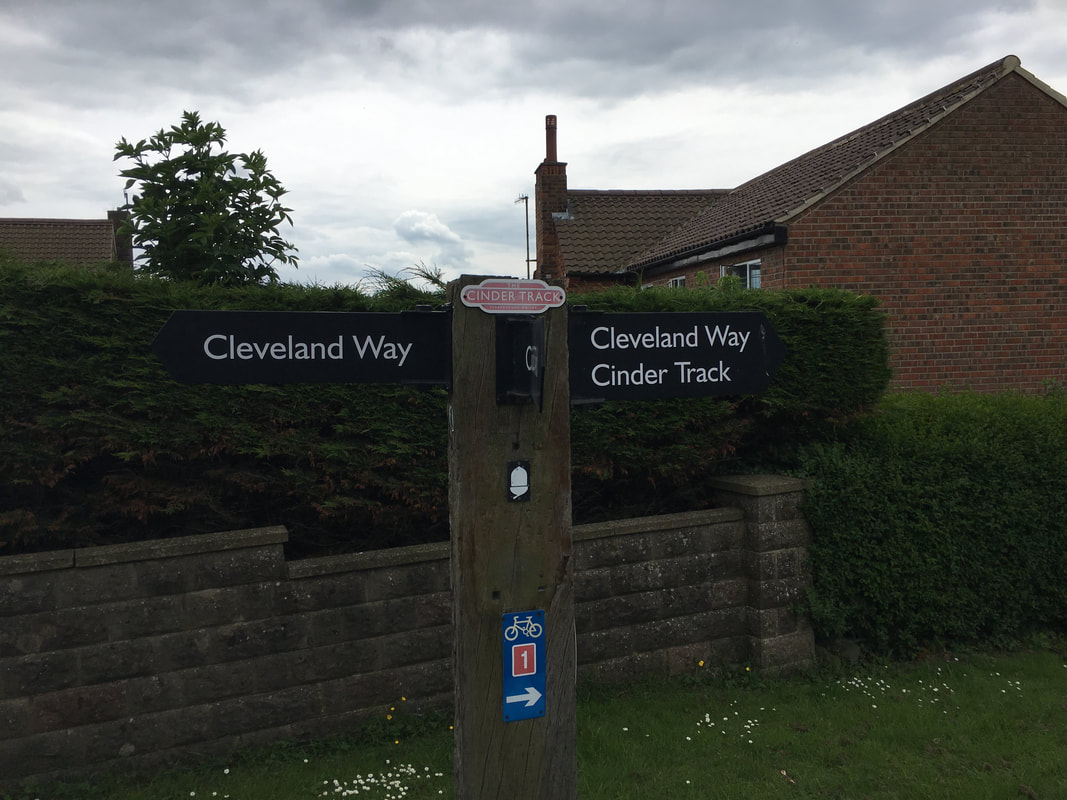 The Cleveland Way meets the Cinder Track at Robin Hood's Bay.
The Cinder Track follows the route of the old railway from Scarborough to Whitby.  The railway was in use from 1885 to 1965, and after it closed Scarborough Borough Council bought the line.  The track ballast was made from cinders rather than crushed stone, hence the name. 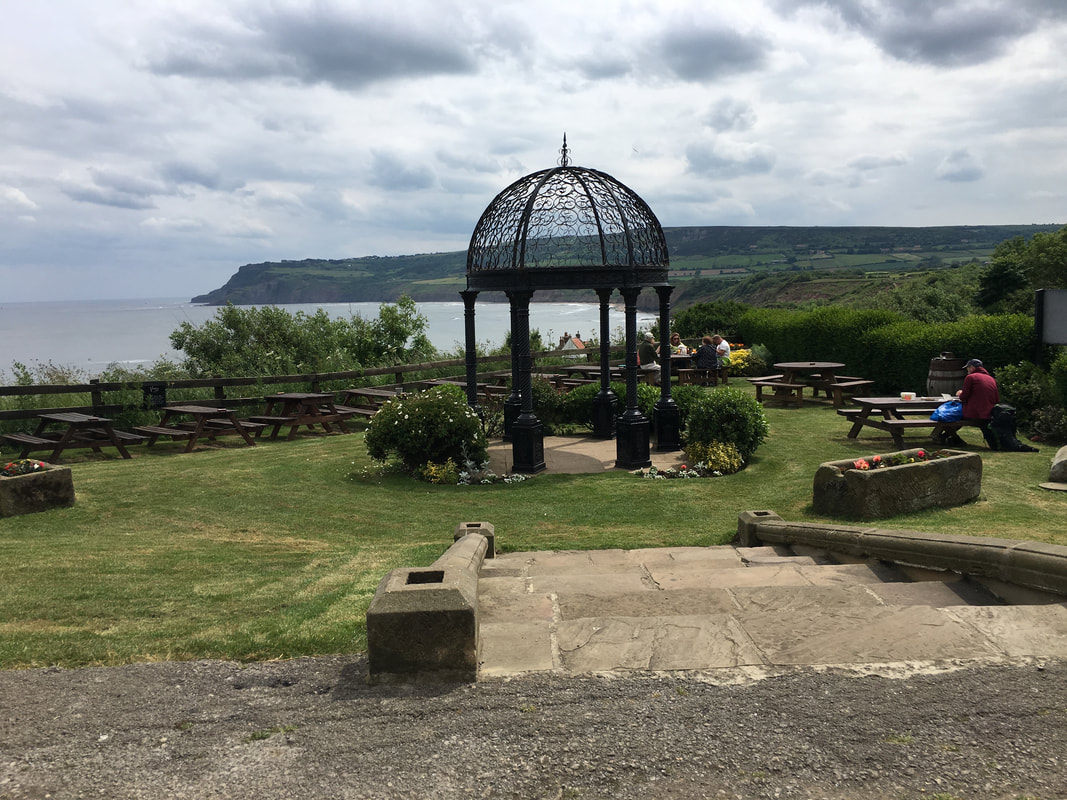 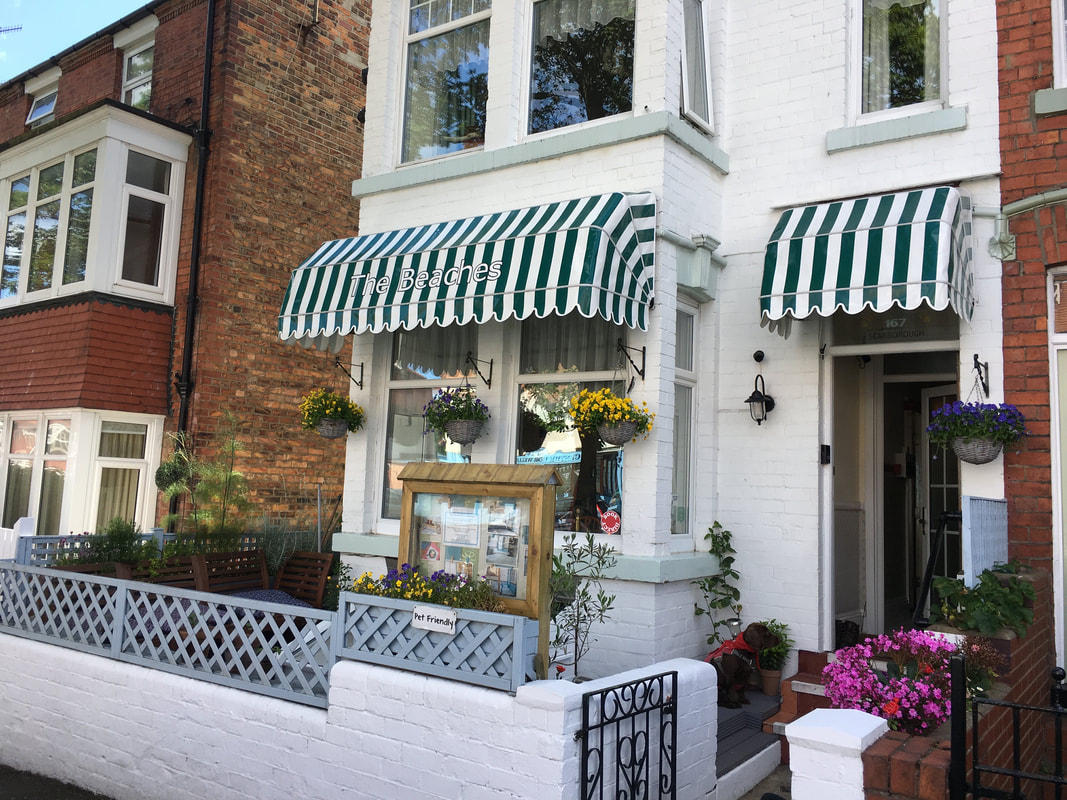