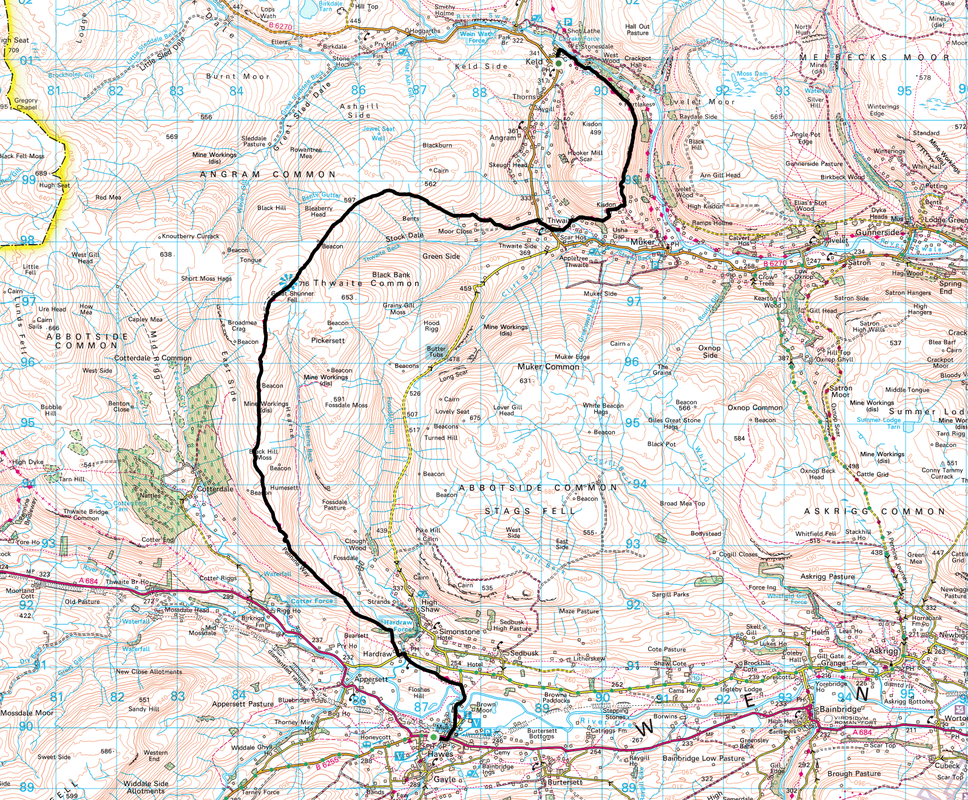 ​Today’s leg was very familiar to us with the only unknown part being that between the summit of Great Shunner Fell & Thwaite. Looking out of the window at breakfast it looked as if we were in for a drizzly and windy walk over to Keld. As it happened the weather only improved as we left Thwaite.

Hawes is a lovely market town and is always busy with people and visitors flock to it for most of the year. It is in a beautiful part of the Yorkshire Dales and we have been here many times and never tire of visiting. We had a really nice stay with Helen at The Bulls Head - no frills, a lovely room and a cracking pub a few doors down, what's not to like?

The Pennine Way passes right through Hawes and leaves via the bridge over the old railway before heading over fields and Hylands Bridge to reach Hardraw. This section is a delightful walk through Wensleydale although we were not seeing it at its best today. We had already been to Hardraw Force which is reached by paying a fee and proceeding through the back of The Green Dragon Pub in the village. Leaving Hardraw, the route headed steeply up a track between walls to reach a gate on to open hillside. There now began a 4½ mile gradual climb to the summit of Great Shunner Fell. In drizzle and poor visibility this was not the most enjoyable way to spend 2 hours as we could not see a lot but having walked this path before we knew what we were missing. 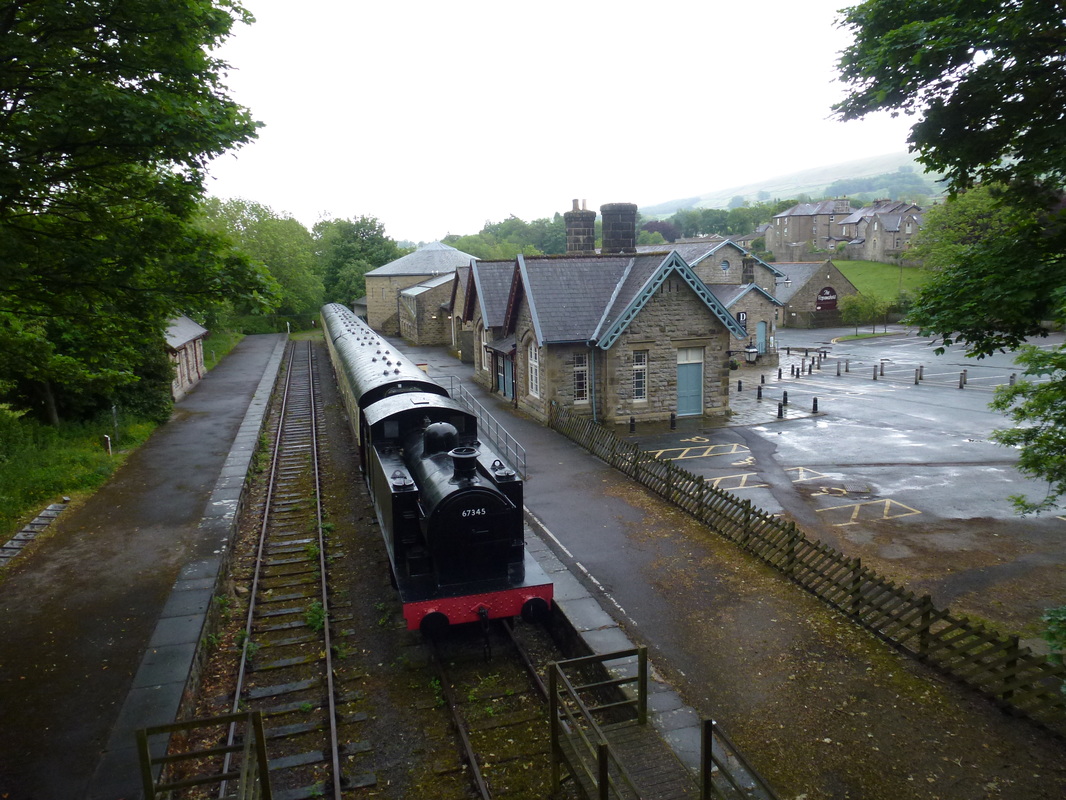 The old railway station in Hawes 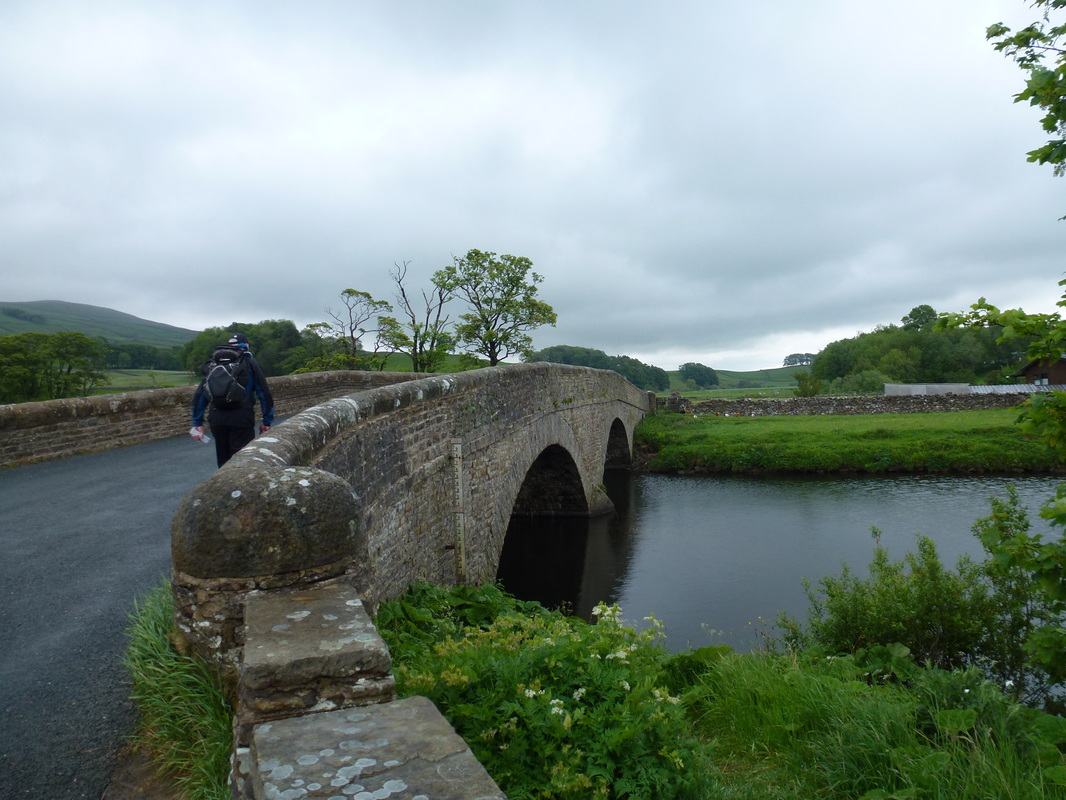 Crossing Hylands Bridge out of Hawes 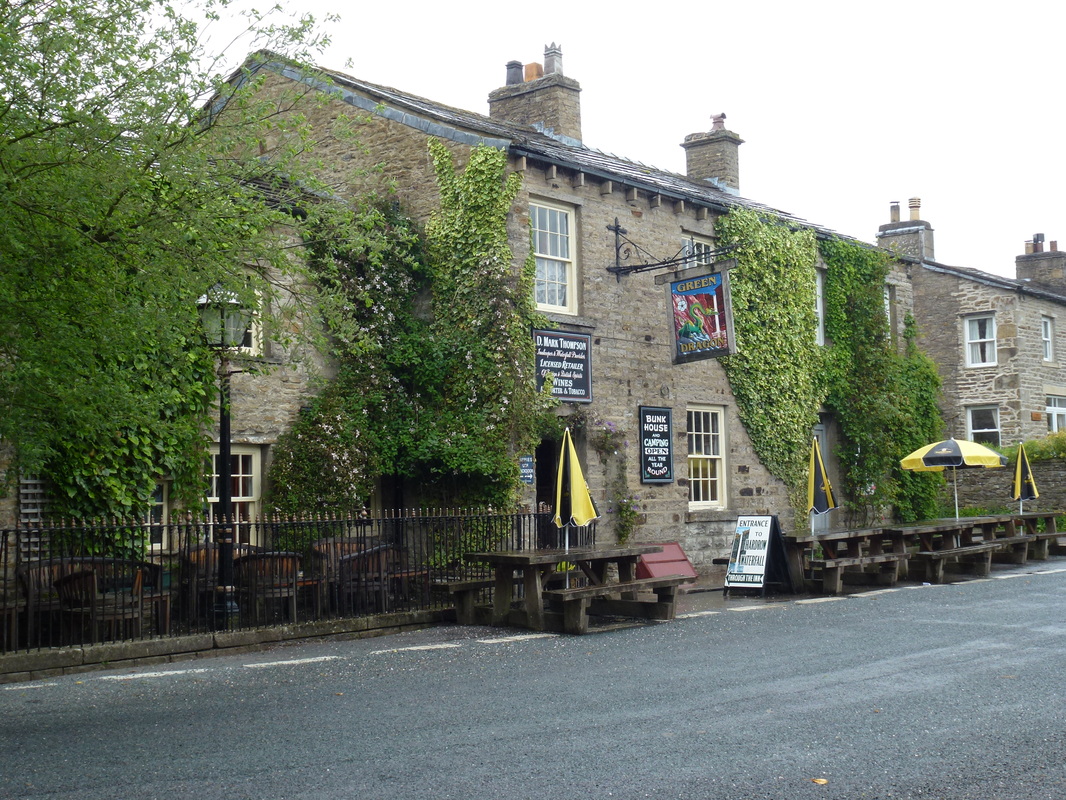 Hardraw Force can be visited through the back of the pub
The path was pretty easy to follow, even in mist as we headed along the ridge. It was clear to see that this path had suffered in the past with erosion as the terrain flitted between duckboards, sunken slabs and steps. Reaching the summit we were surprised to see quite a few people occupying the cross shelter and sheltering from the drizzle coming across the top. We had a bit of lunch and met a couple of people who were walking the Heriot way and were off to Aysgarth. Lunch over it was time once more to brave the elements and head off in the direction of Thwaite.​ 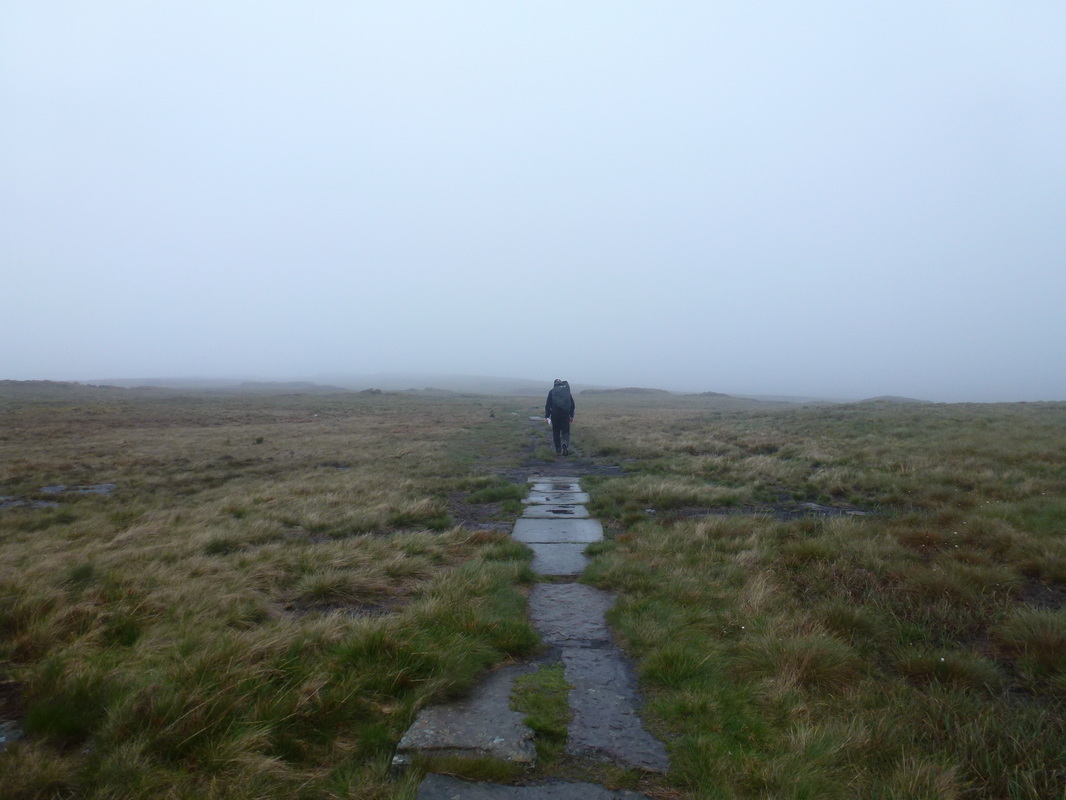 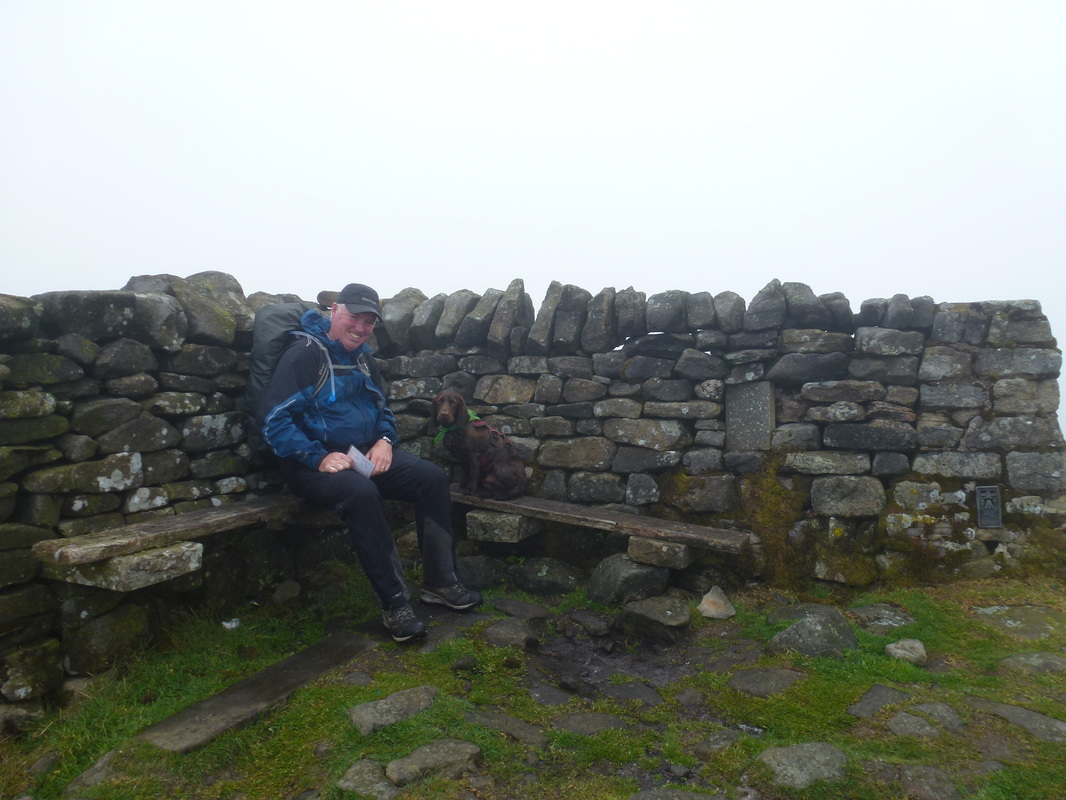 A white out on the top - notice how the Trig Point forms part of the shelter
The descent from Great Shunner Fell is gradual on similar terrain to that of the ascent and was completed in mist for the most part. ​We passed a couple of large cairns about halfway down and crossed two groughs before reaching a stony track which was hard going but eased as we neared the village. At Thwaite we stopped at the Kearton Tea Room and sat outside as by this time the weather had eased.​ 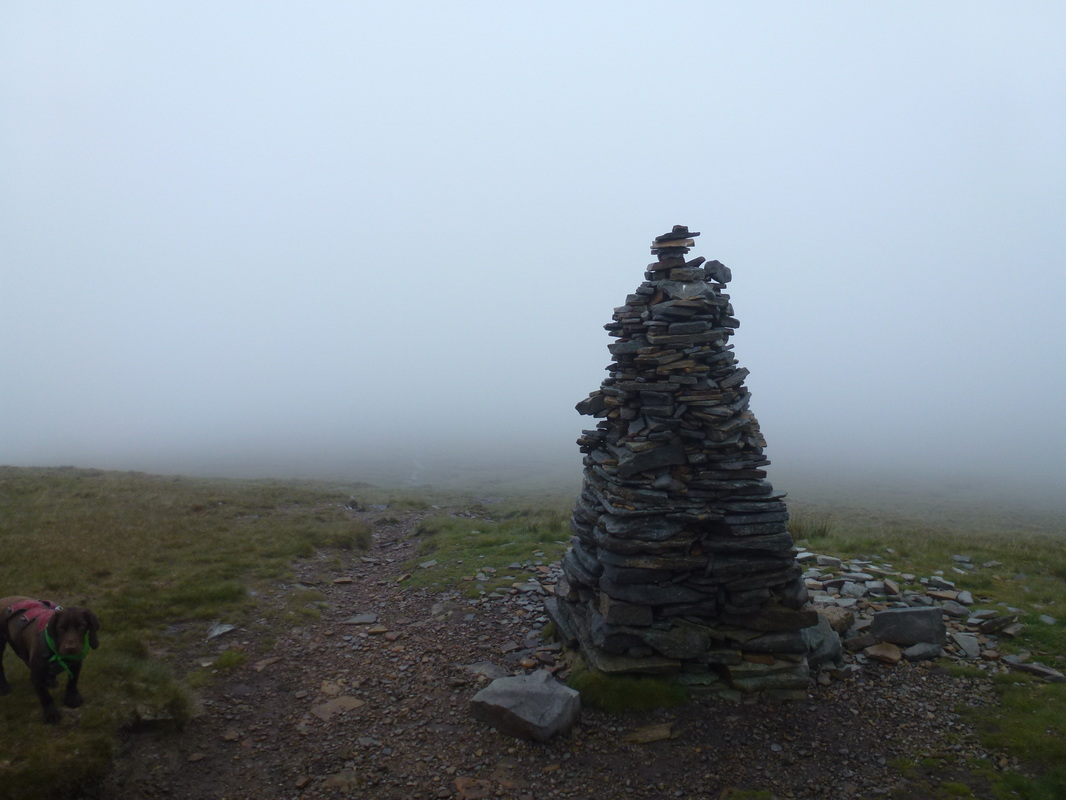 This large cairn shows the way down - the viz is not getting much better! 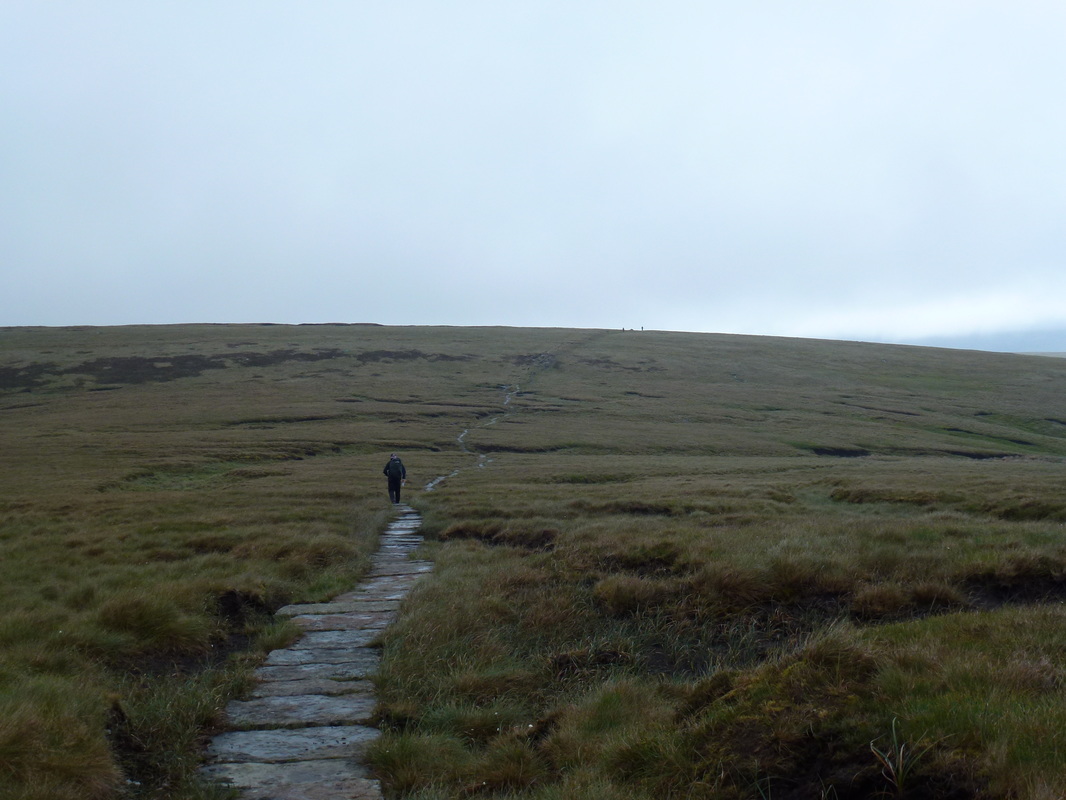 Again, thank goodness for flagstones as we head for another large cairn on the horizon - the 2 Heriot Way walkers are ahead of us 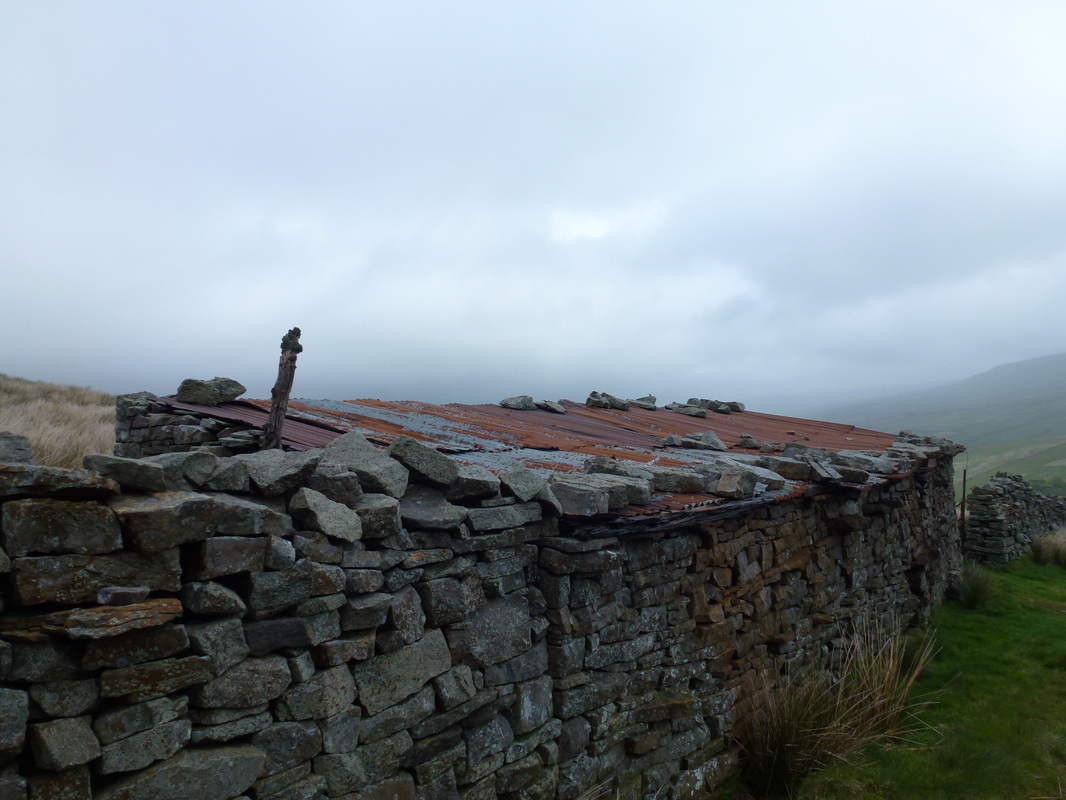 Hope it keeps his roof on 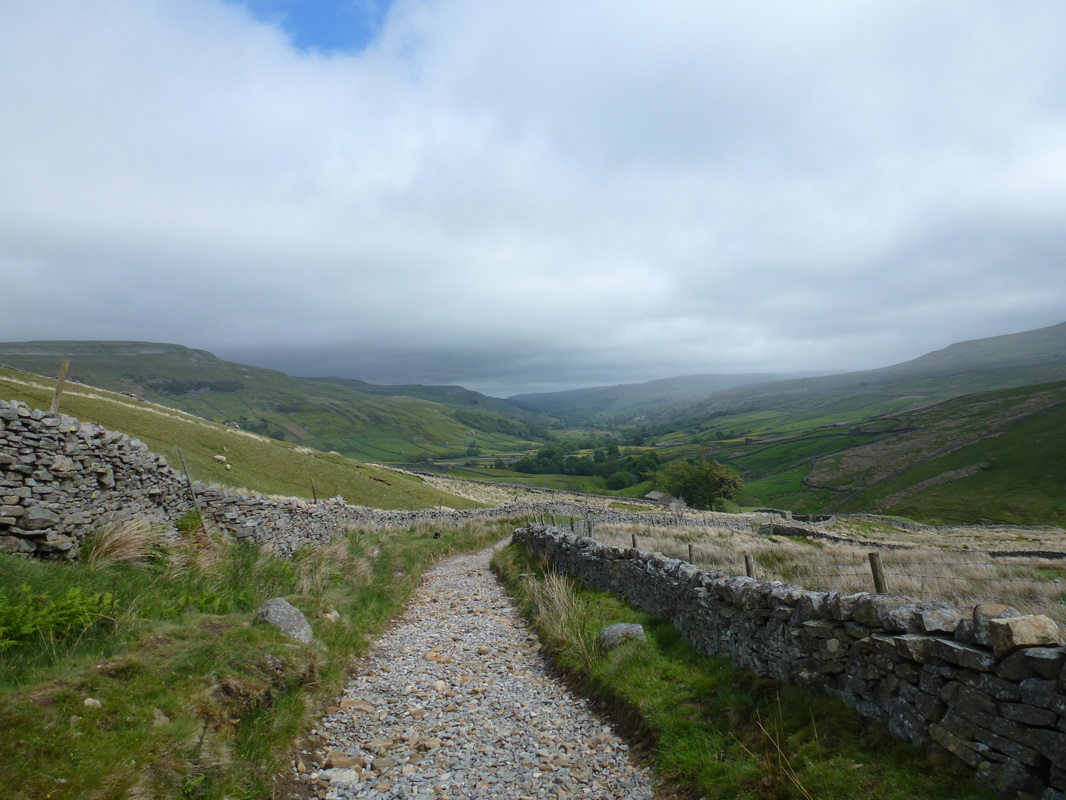 The stony path down to Thwaite - weather is better at last 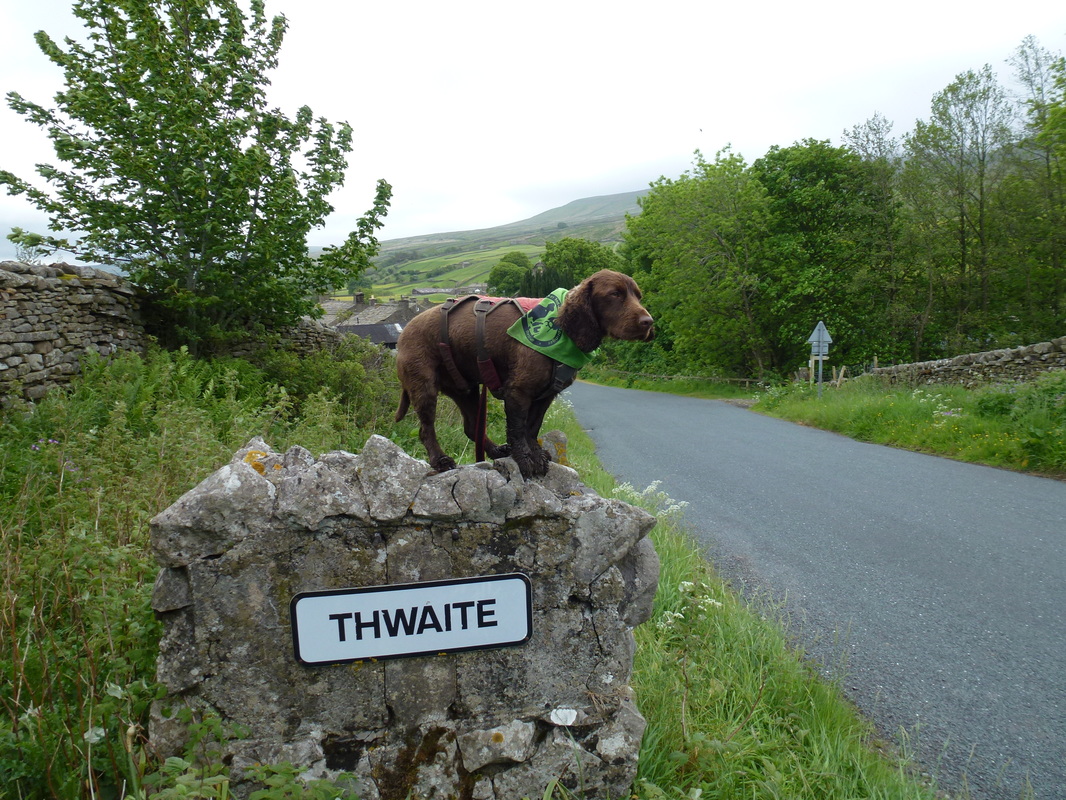 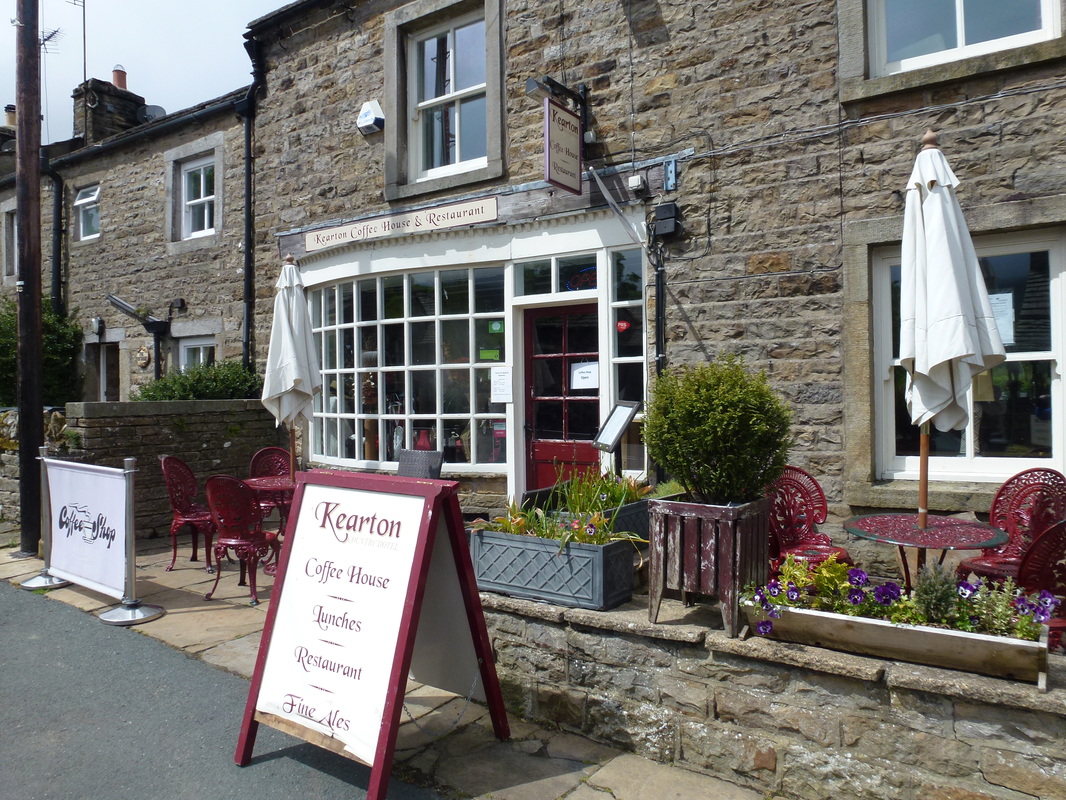 Never one to pass a tea room opportunity - this one was in Thwaite
Leaving Thwaite, the path took a convoluted route through houses to pass through fields and by several barns before arriving at Kisdon House. From the farm we passed through several gap stiles before climbing steeply to begin the long 2 miles along a rocky path high above the Swale to Keld via the slopes of Kisdon Hill. The only issue we had on this path was a group of feisty cows about half way along.​ 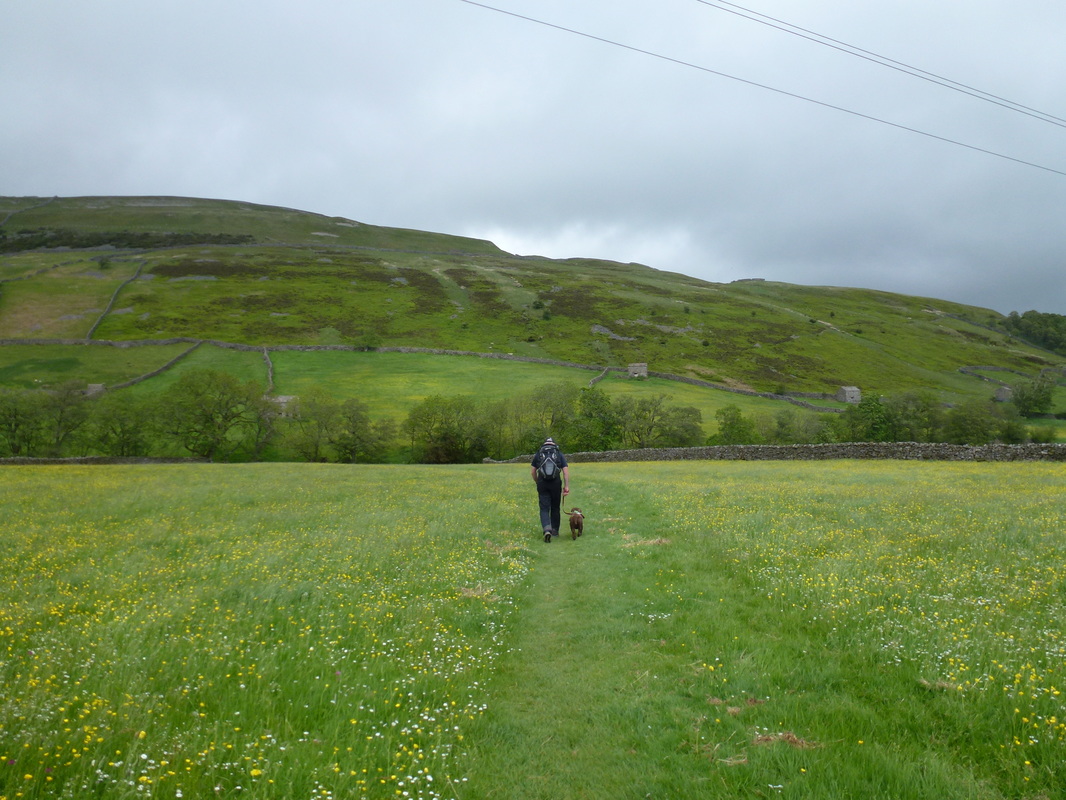 Lovely walk out of Thwaite towards Keld - the weather had improved markedly! 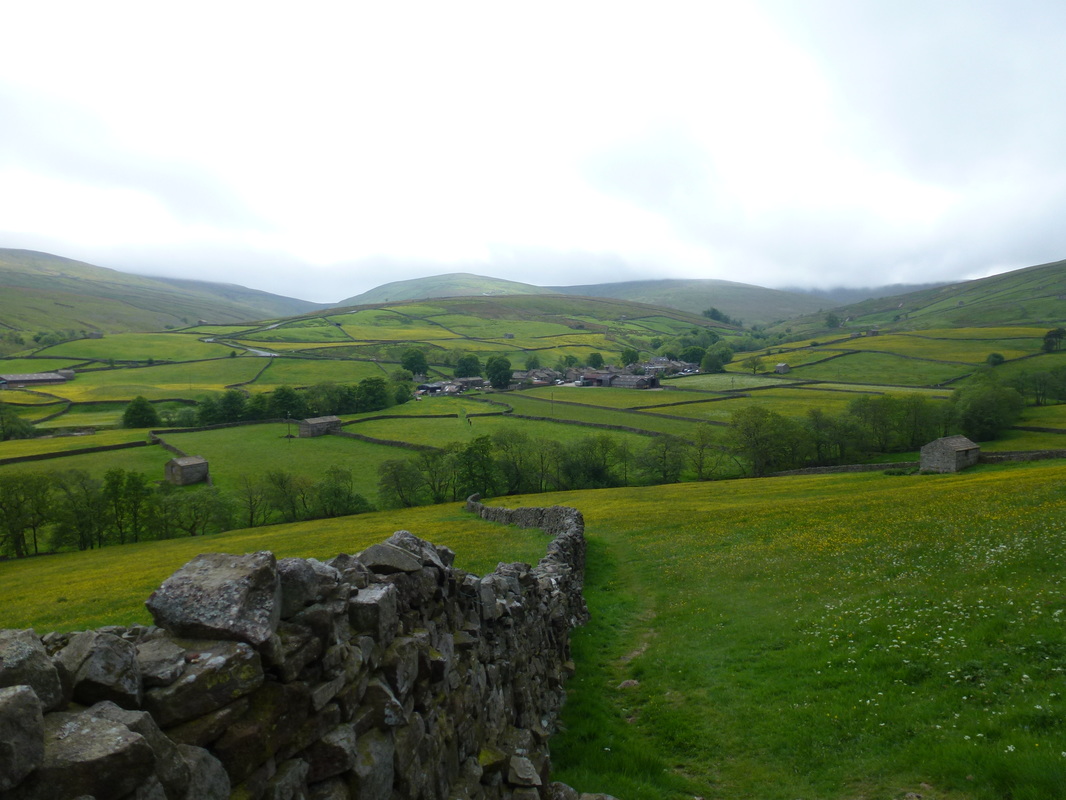 Looking back to the rise out of Thwaite 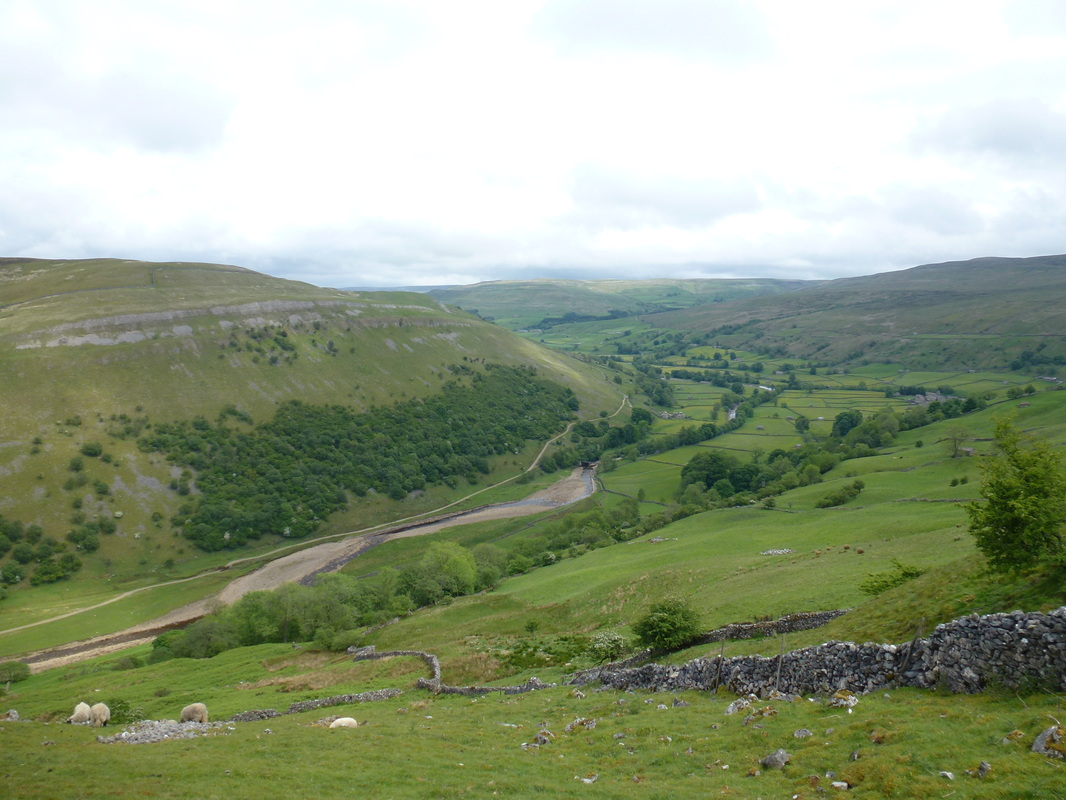 Looking down to Rampsholme Bridge, the Swale & Muker 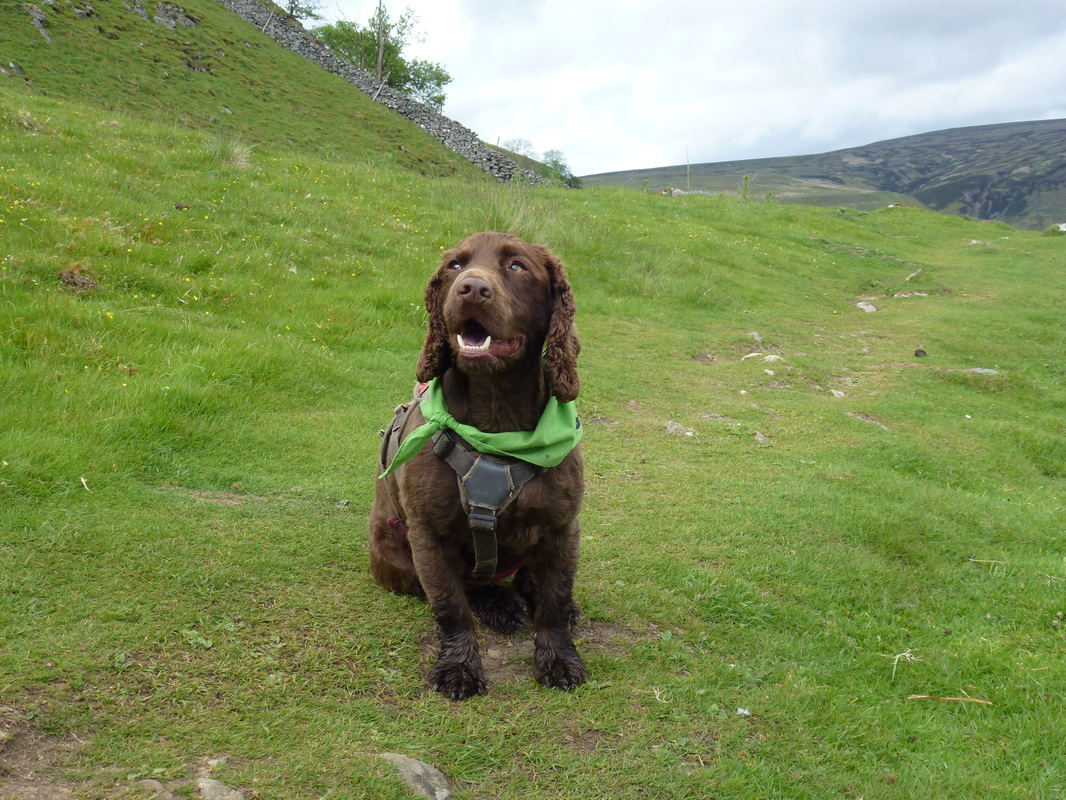 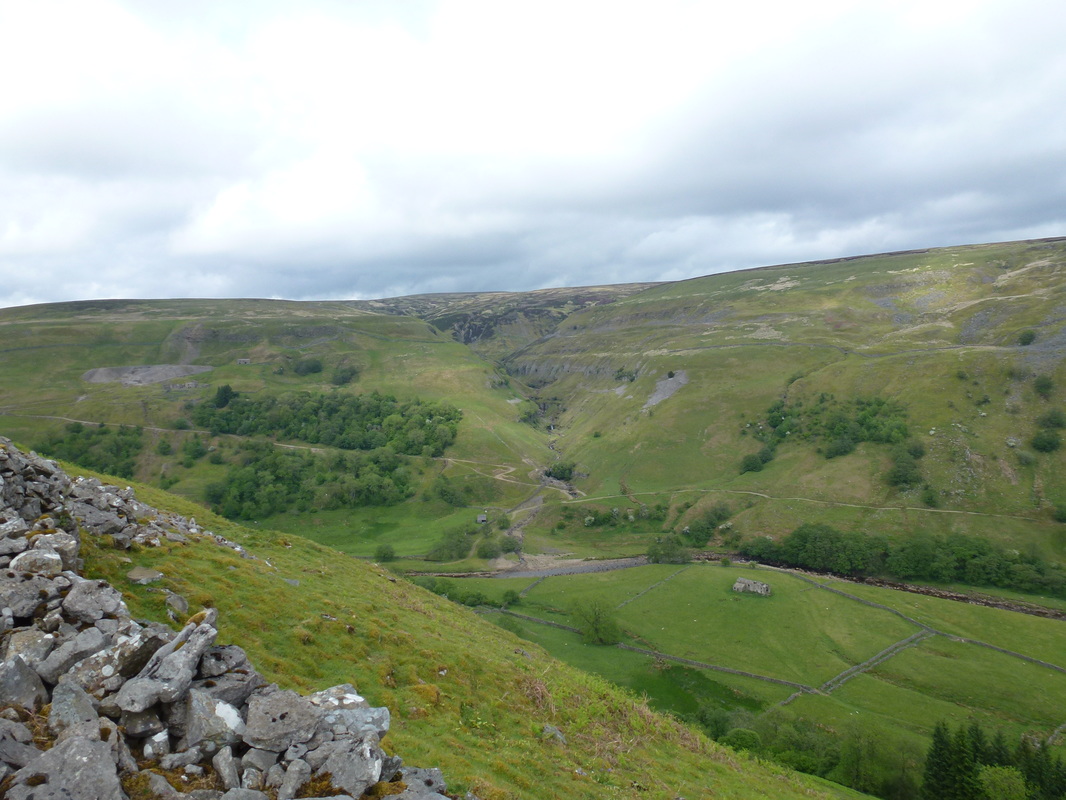 Swinner Gill with Crackpot Hall to the left
The path finally eased as we neared Keld and became easier underfoot and we soon arrived at the bridge over the Swale where the Coast to Coast route meets The Pennine Way - we would come back to this point tomorrow, however for now we were off to find our bed for the night at Butt House. The owners Chris & Jackie gave us a lovely welcome and we settled in knowing we would not have to move out of here tonight as they also do an evening meal - Black Sheep on draught too!! At dinner we were joined by 7 people who were doing the Coast to Coast - 4 Australians and 3 Brits and we had a delightful evening in their company.​ 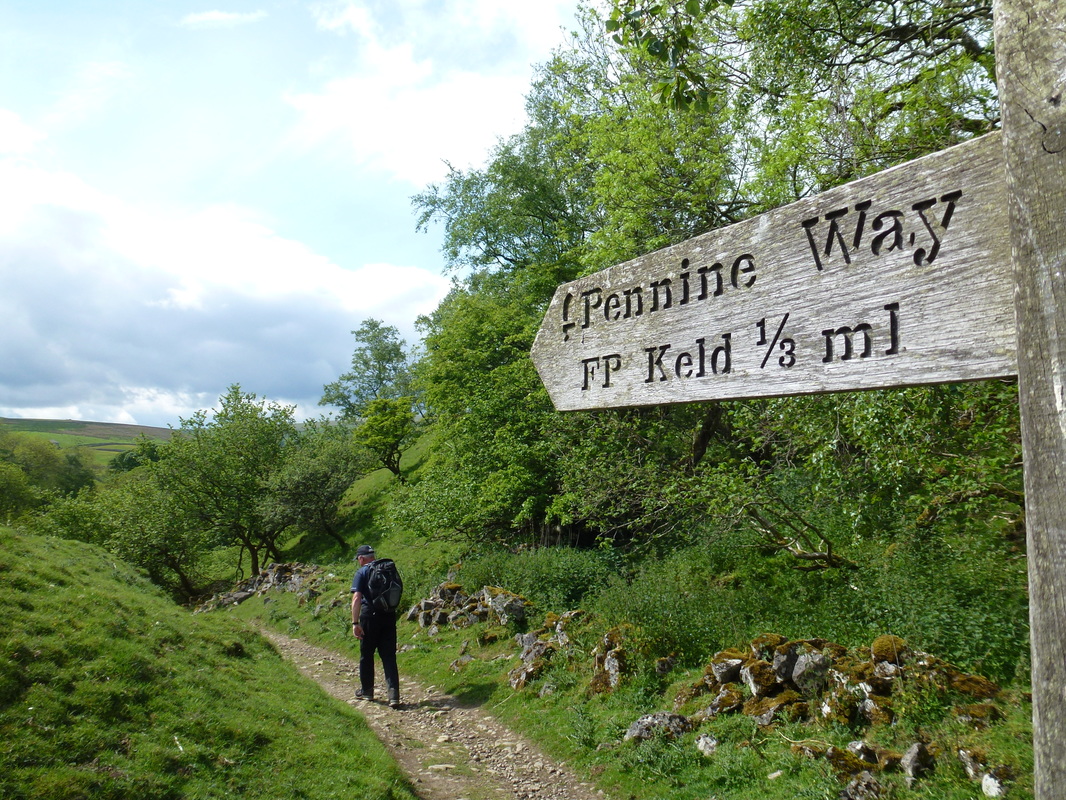 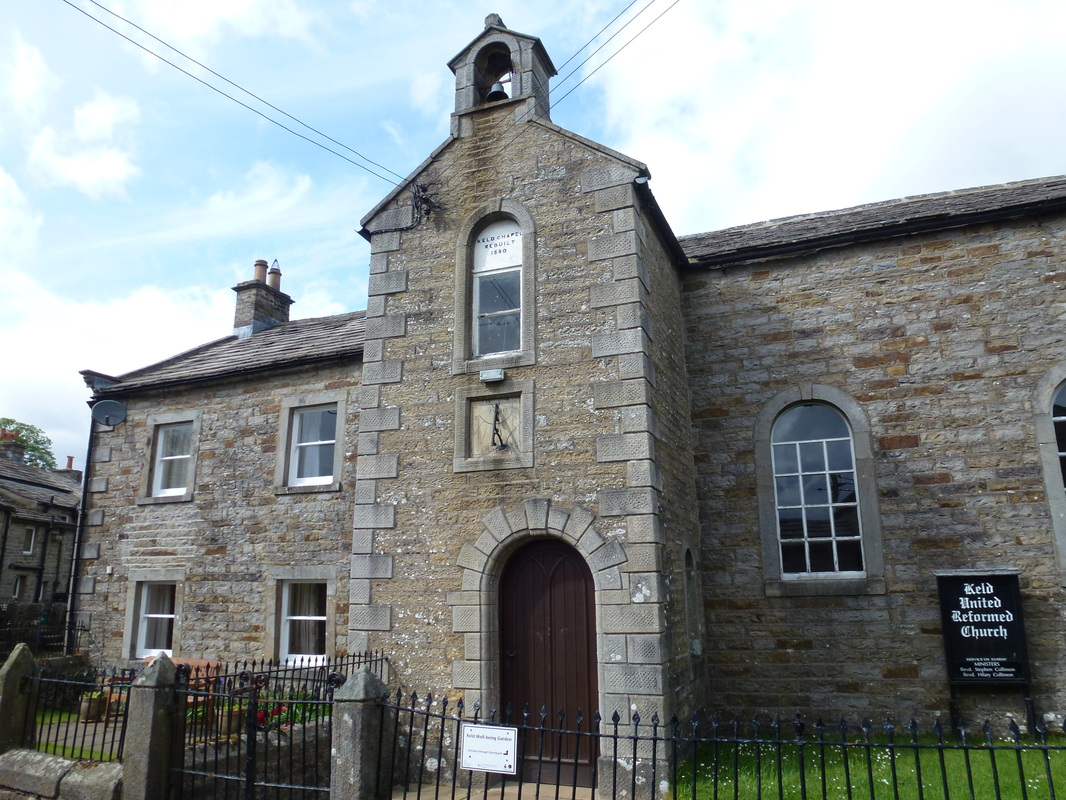 The church in Keld
Overnight Accommodation​ 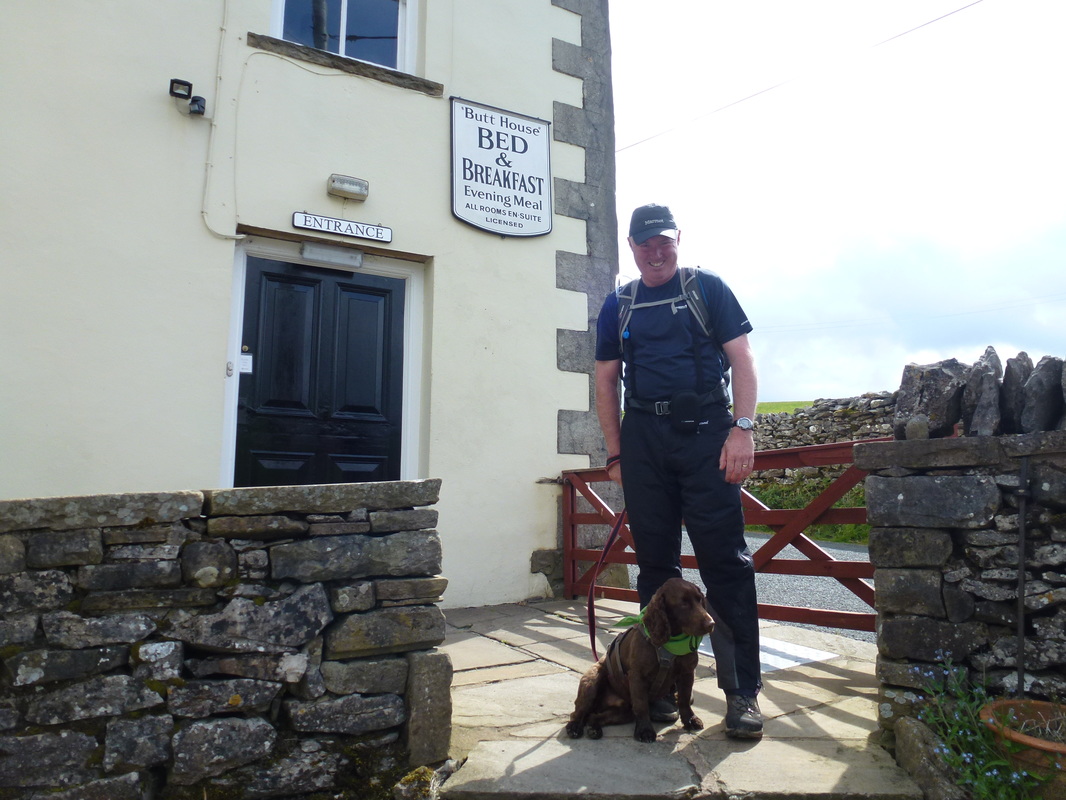 Chris & Jaquie have not been here long however they run a fantastic B&B. Black Sheep Beer on tap and a superb evening meal made for an excellent stay - so much so we have booked to stay with them next year when we do the Coast to Coast again.
​Day 9 Data
​© Copyright Dave Walsh 2013 - 2022 All Rights Reserved