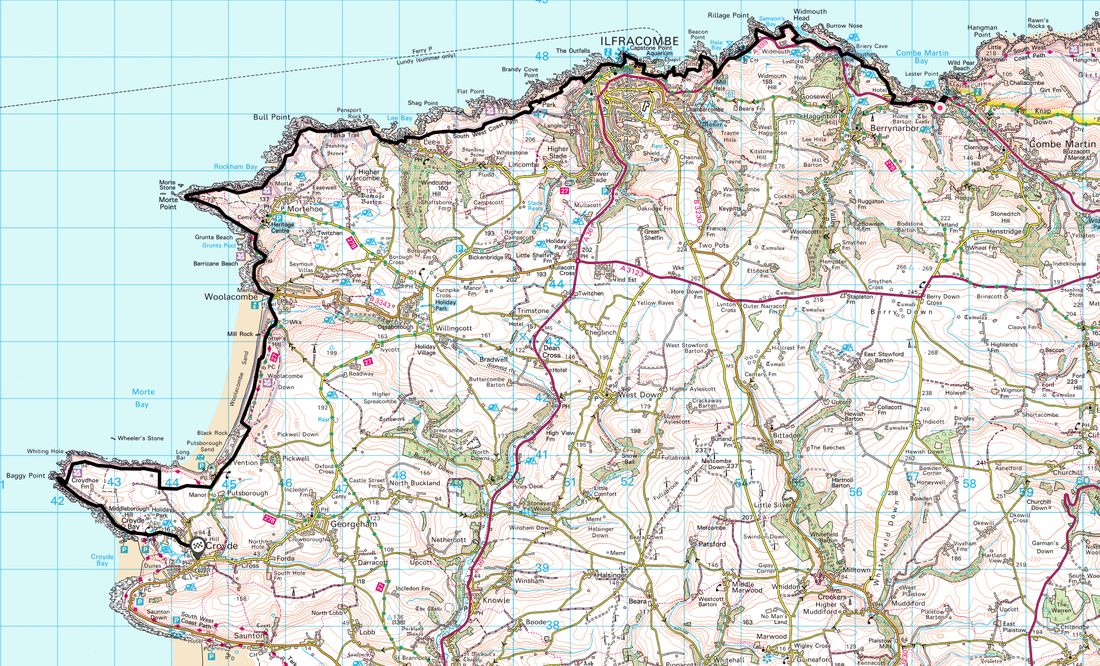 We came down to Breakfast to see the 4 lads we dined with at our B&B in Lynmouth were staying here too. After a chat with our hosts, Colin & Jonathan - mainly to confirm they would pick us up in Croyde later, we were off. Our hosts were an interesting couple - Colin was a former actor and Concierge at the Grand Hotel in Brighton whilst his partner Jonathan was an ex Postman.

At almost 21 miles, today would be one of the longest days of the entire walk but as we had a 2 day stay in Combe Martin we were travelling with just the basics today. It is one of the added bonuses of staying more than one night in a particular place - we so looked forward to the days of light rucksacks. The walk to Ilfracombe was very pleasant however on arrival the town was fit to bursting with people and such bustle and noise was a bit of a shock to the system. This was to be the case in other big towns whereby the long distance walker who is used to mainly solitude is suddenly hit by the masses.

On the plus side large towns means plenty of facilities and we soon spotted an Ice Cream Shop and it would have been rude not to sample their fare. It seemed to take an age to get out of Ilfracombe and we bimbled about for a few minutes near the Theatre trying to work out the best way of regaining the path - here we bumped into Roy & Bernie who were visiting Ilfracombe for the day. We eventually found what we thought was a way back on to the path but soon arrived at a small wall blocking the way - climbing the wall Dave caught his footing and gashed his shin - Claret everywhere. Luckily we were carrying a first aid kit and he was soon patched up. Just goes to show why it is so important to carry a First Aid Kit - it came in really useful today.

Near Bull Point we met up with Chris who we would see a lot of over the next few weeks. Chris was camping along the route with the odd B&B stay and was hoping to finish on 1 July. After the superb stretch between Bull & Morte Point we arrived in Woolacombe - again the village was extremely busy and we chatted to a chap who was also walking the path - this was Simon, an ex policeman who must have noticed our dishevelled look. Crossing the area above the beach we encountered a nasty dog owner whose pooch was off lead and took a dislike to Fudge - when we suggested they may wish to get control of their dog and put him on a lead they replied with "We don't have to - we live here" - unbelievable. Whilst this was a long day the scenery on the whole was just fantastic and we eventually arrived in Croyde where we settled in at Billy Budd's for Cider whilst we waited for Colin to pick us up and take us back to Combe Martin. Absolutely knackered therefore settled in for the evening with a Carpet Picnic.​ 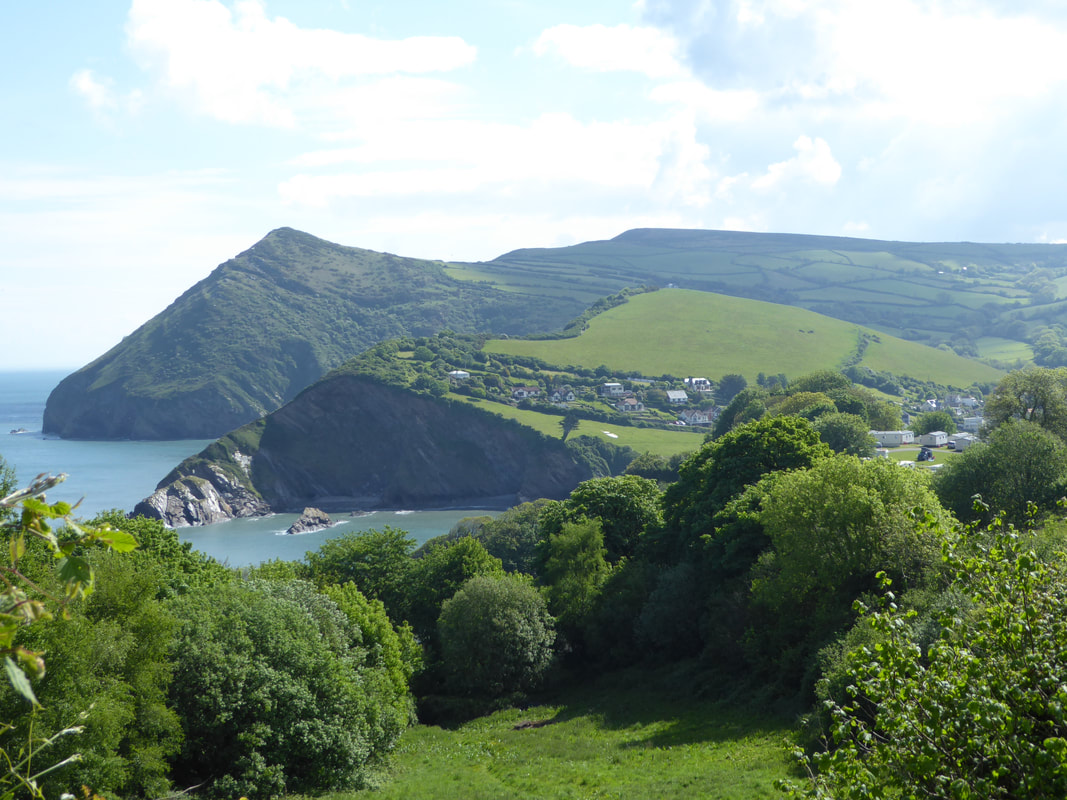 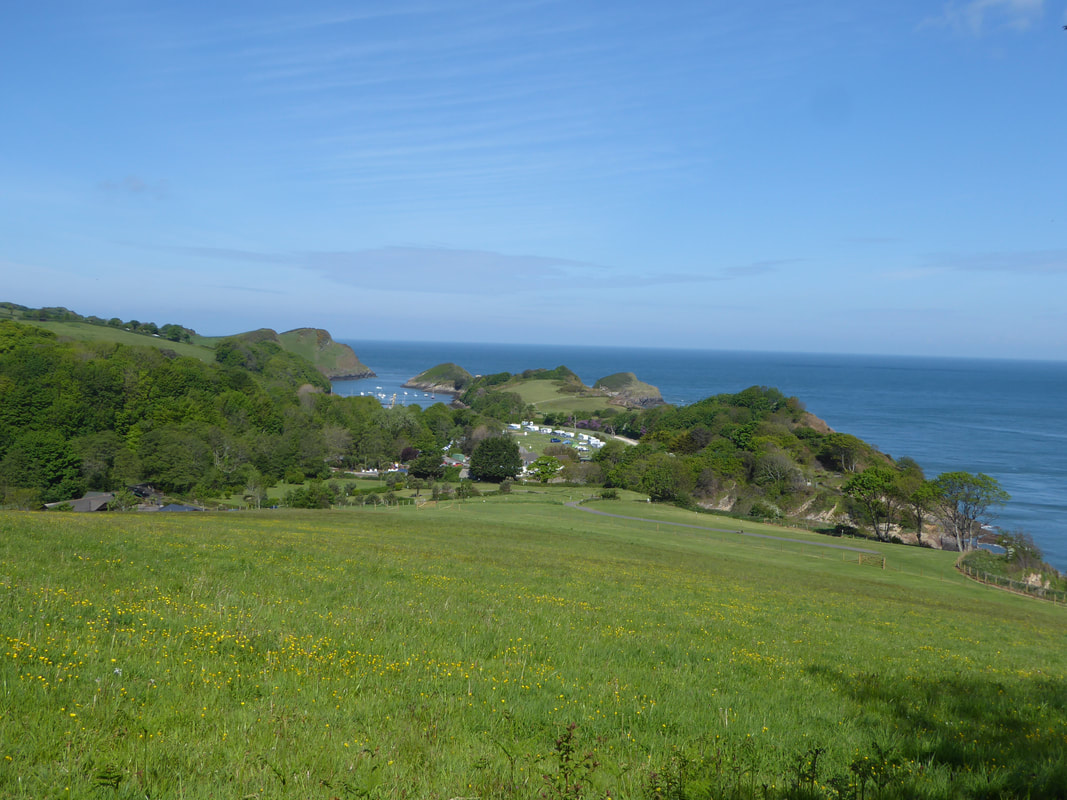 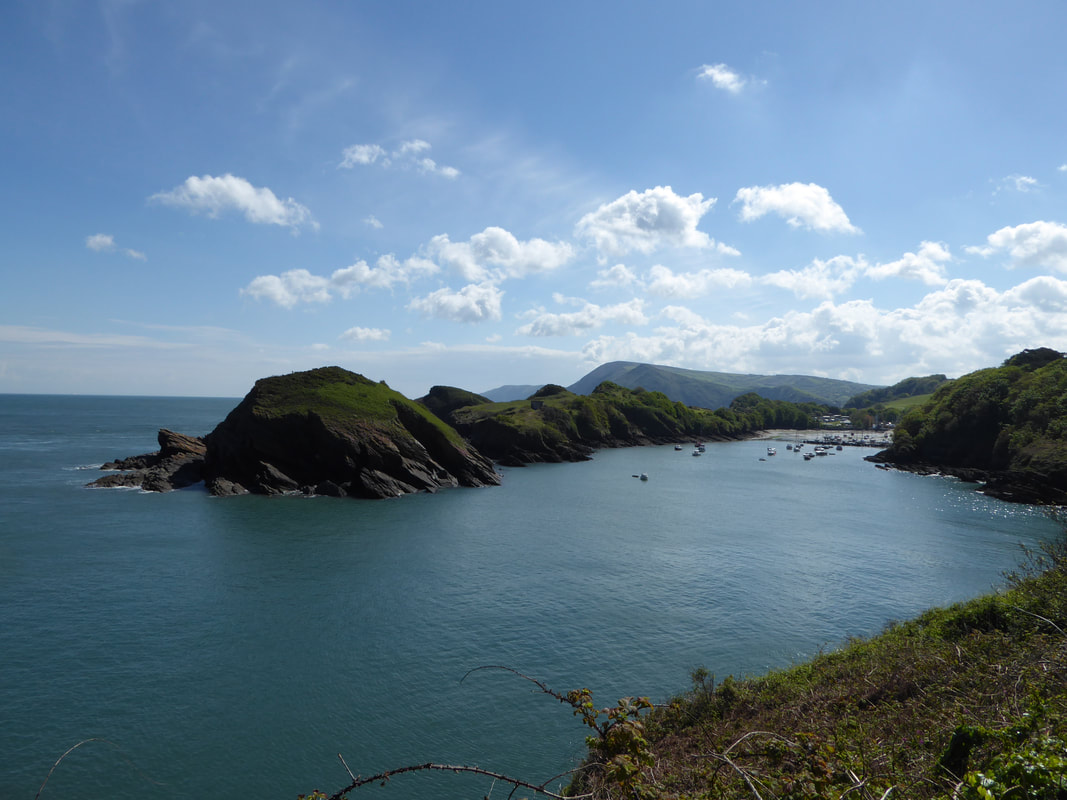 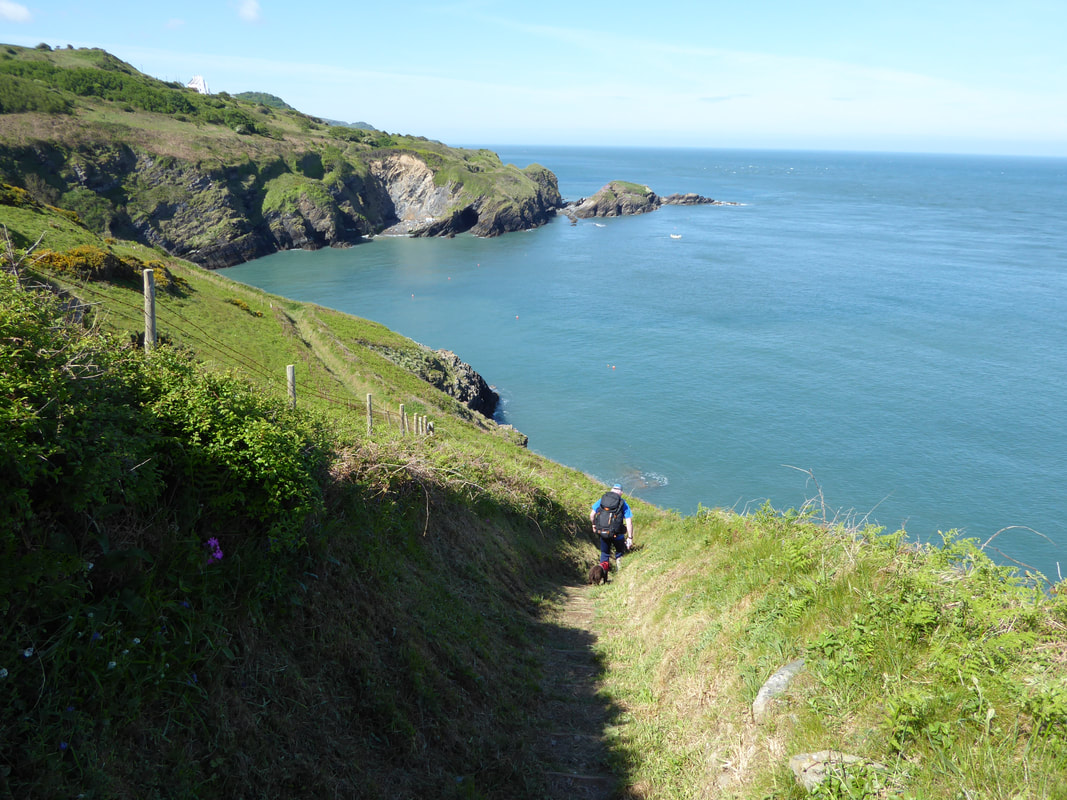 Rounding Widmouth Head there is a steep descent to Samson's Bay 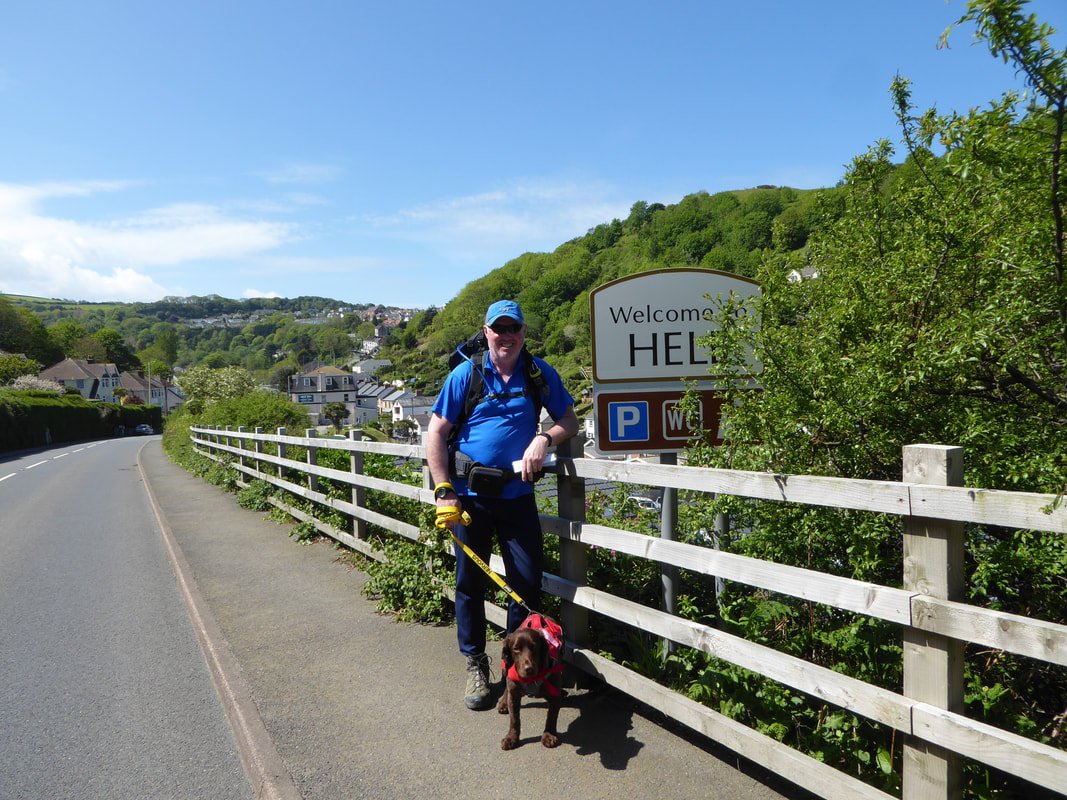 Not "Welcome to HELL" but to the pleasant village of Hele 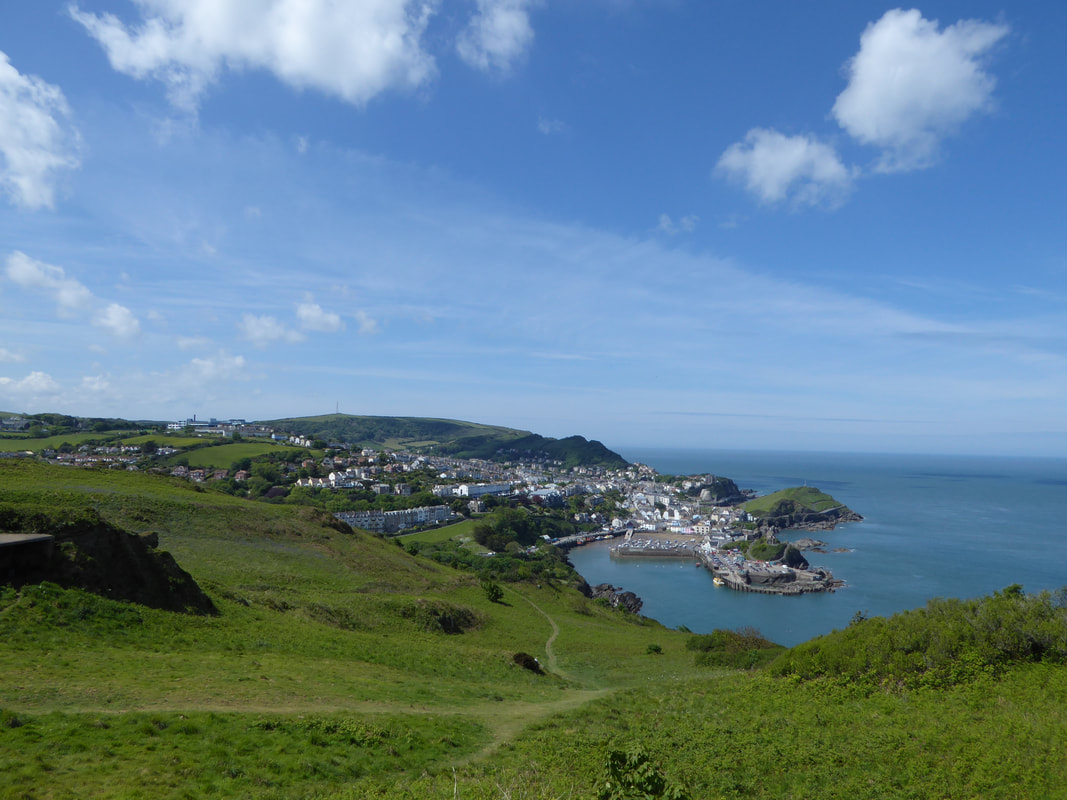 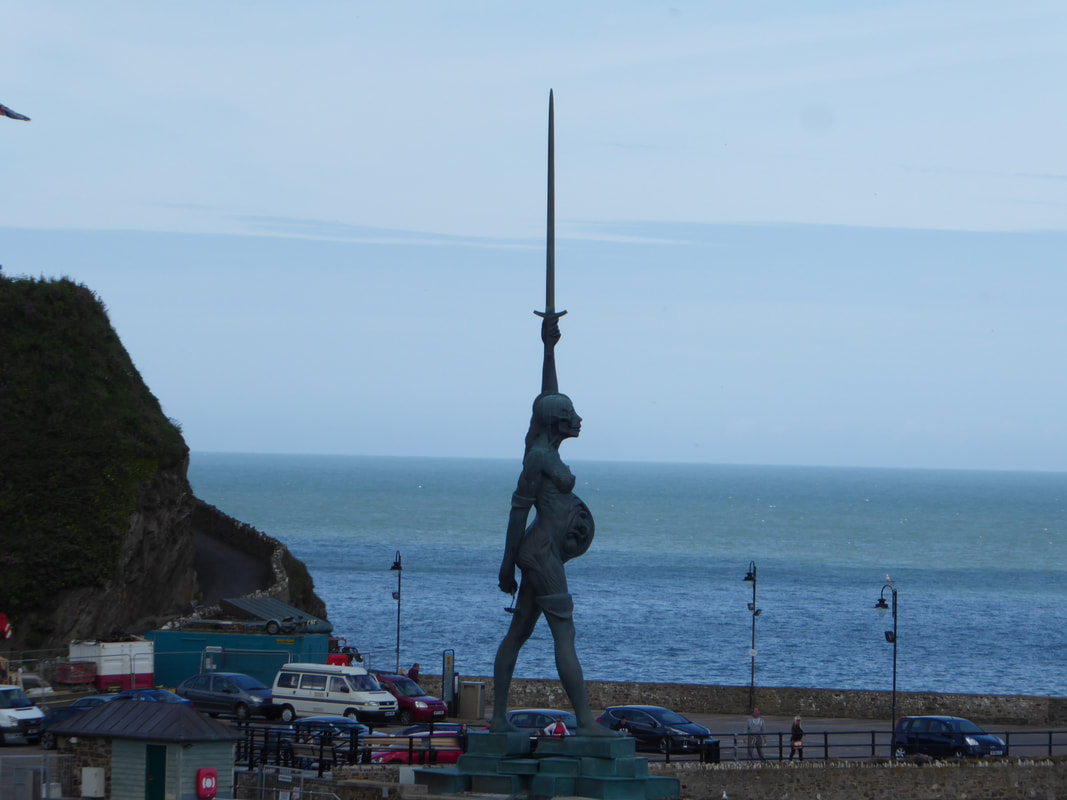 "Verity" by the artist Damien Hirst which stands at the entrance to Ilfracombe Harbour.
​Hirst has a home in nearby Combe Martin and has loaned the 20 metre statue to the town for 20 years. 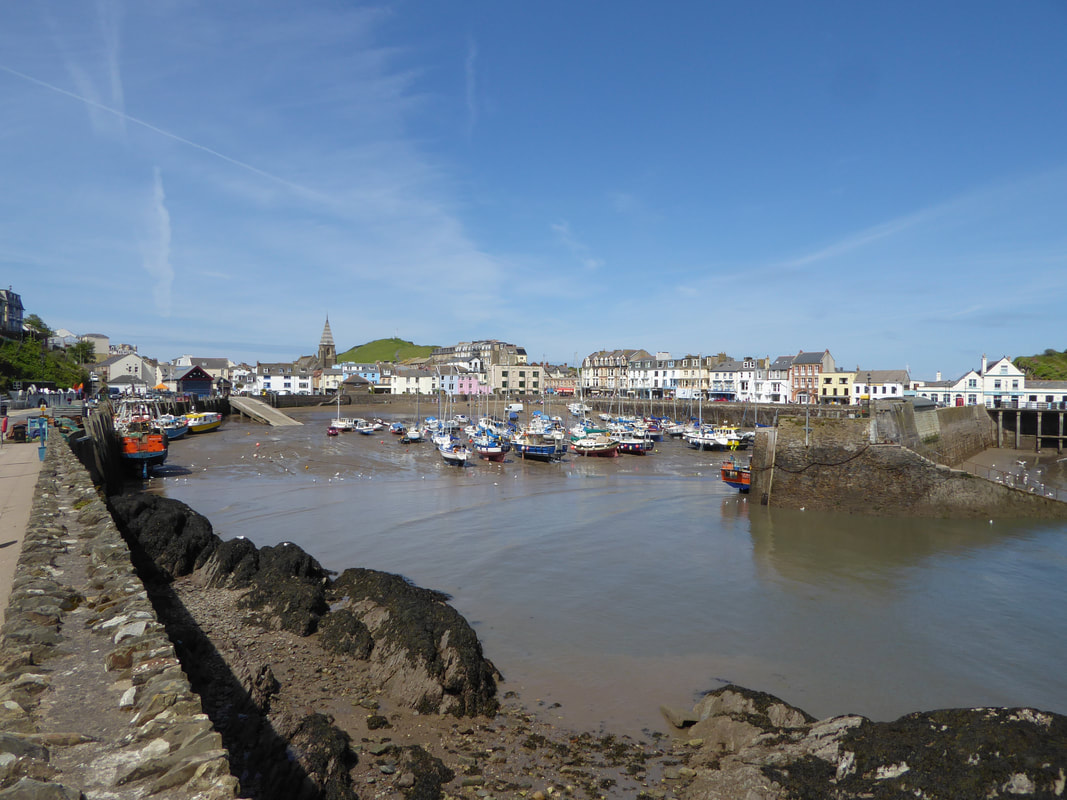 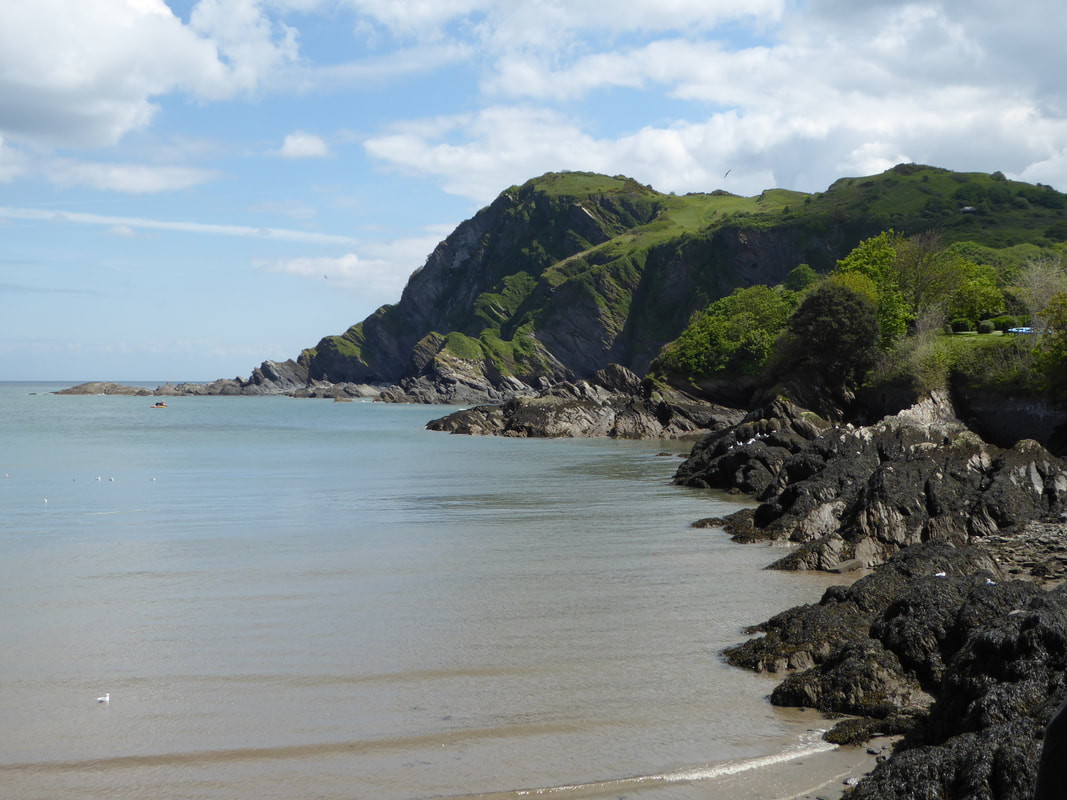 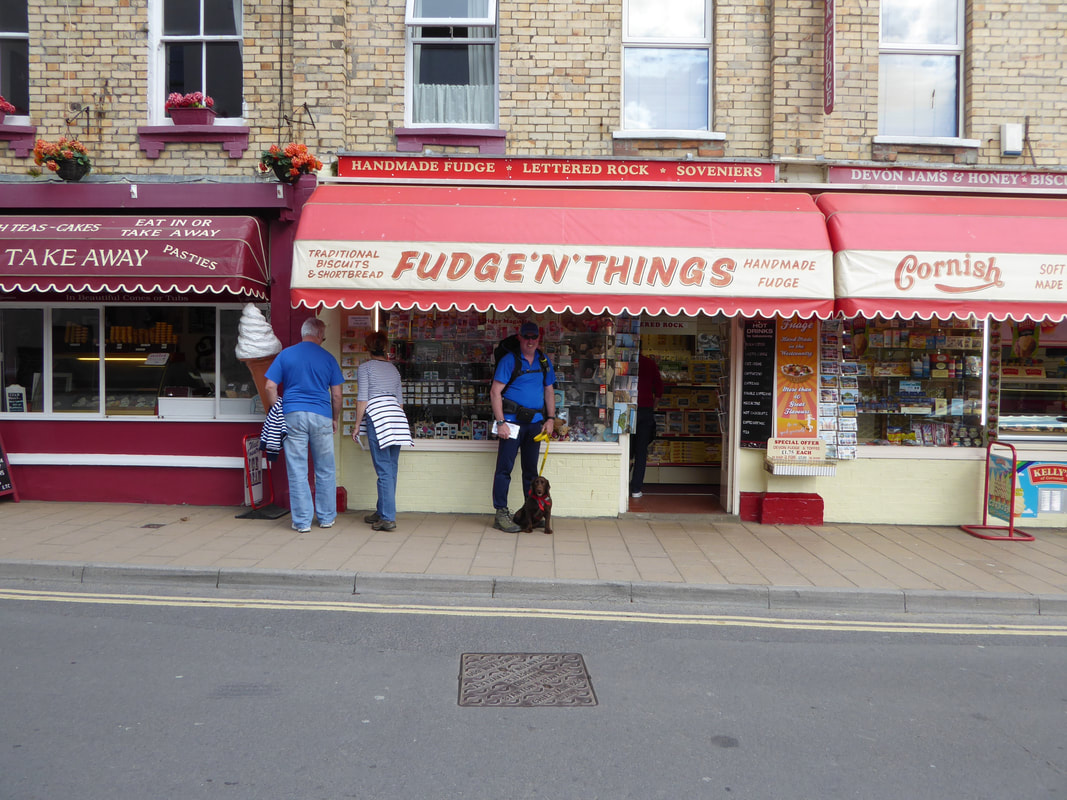 I wonder who the "Thing" is?  Anyone spot the spelling error?? 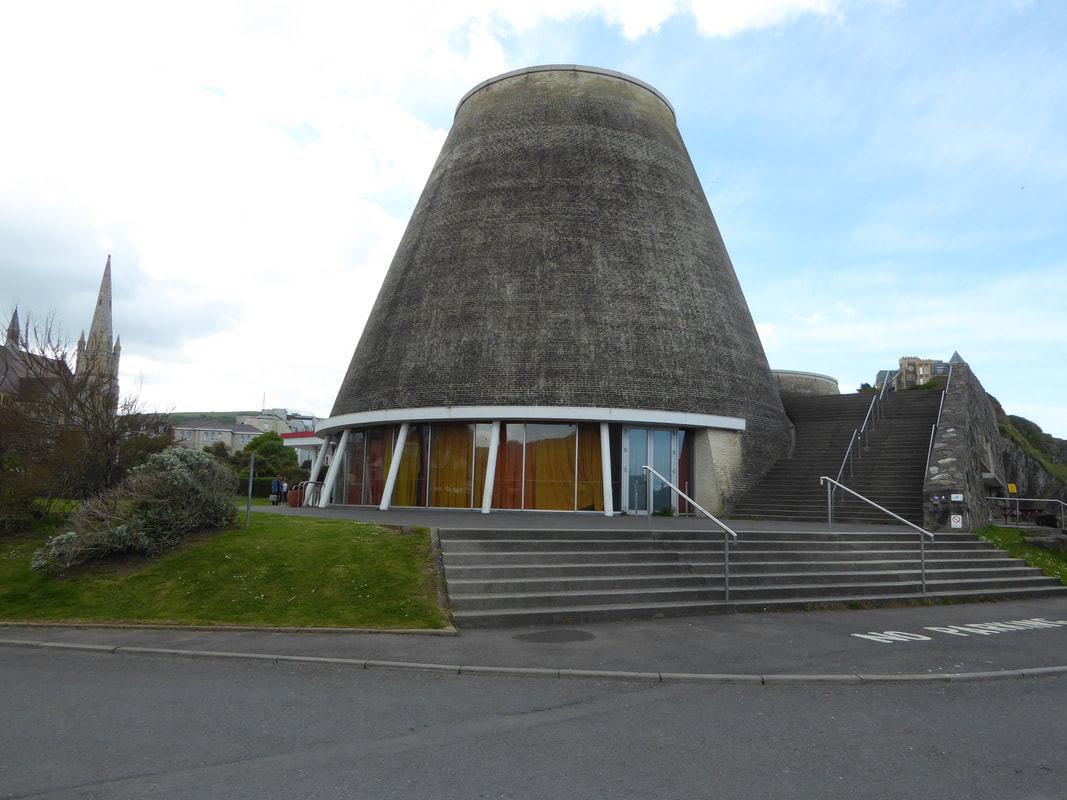 The Landmark Theatre in Ilfracombe. This is one of two conical buildings housing the theatre and is often referred to as Madonna's Bra.
It is a hideous looking building - what were the town planners thinking? 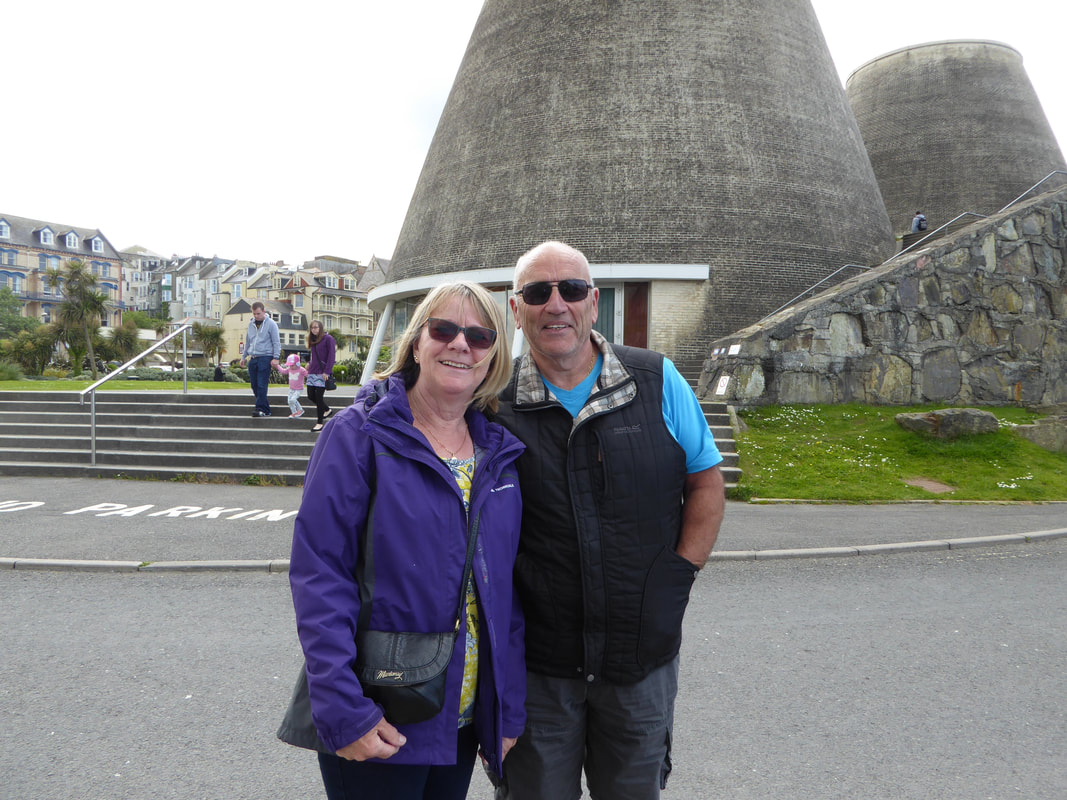 Nice to bump into Bernie & Roy in Ilfracombe 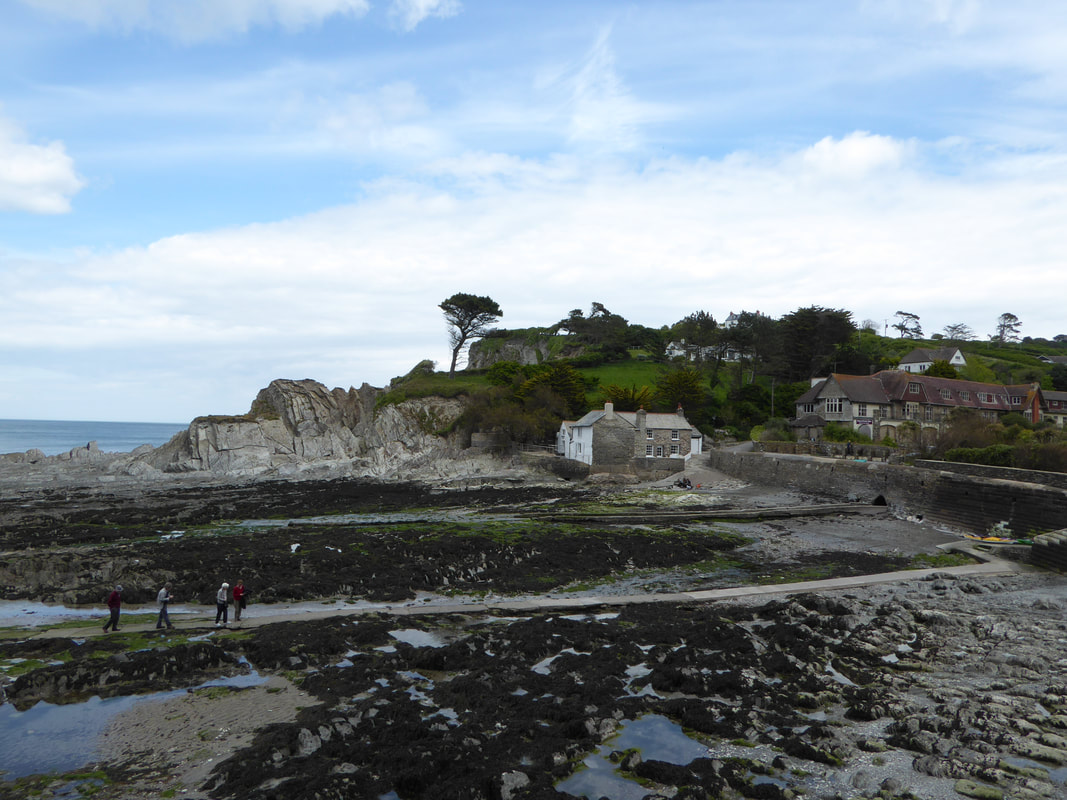 The small village of Lee 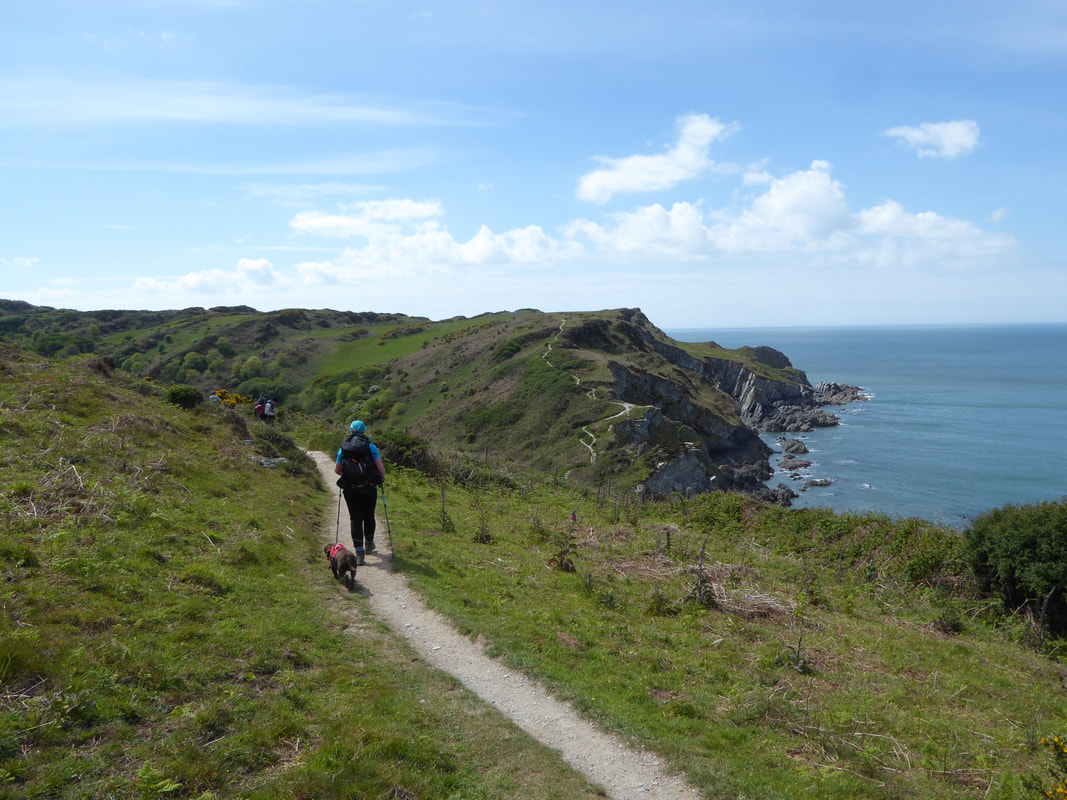 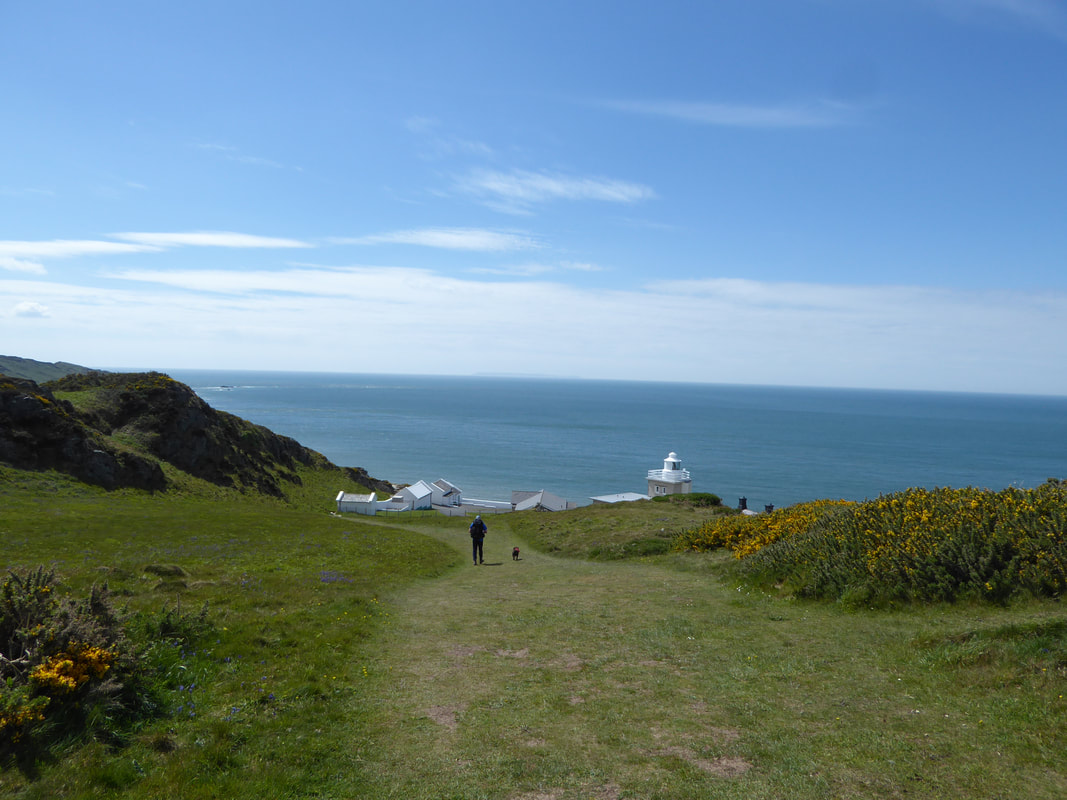 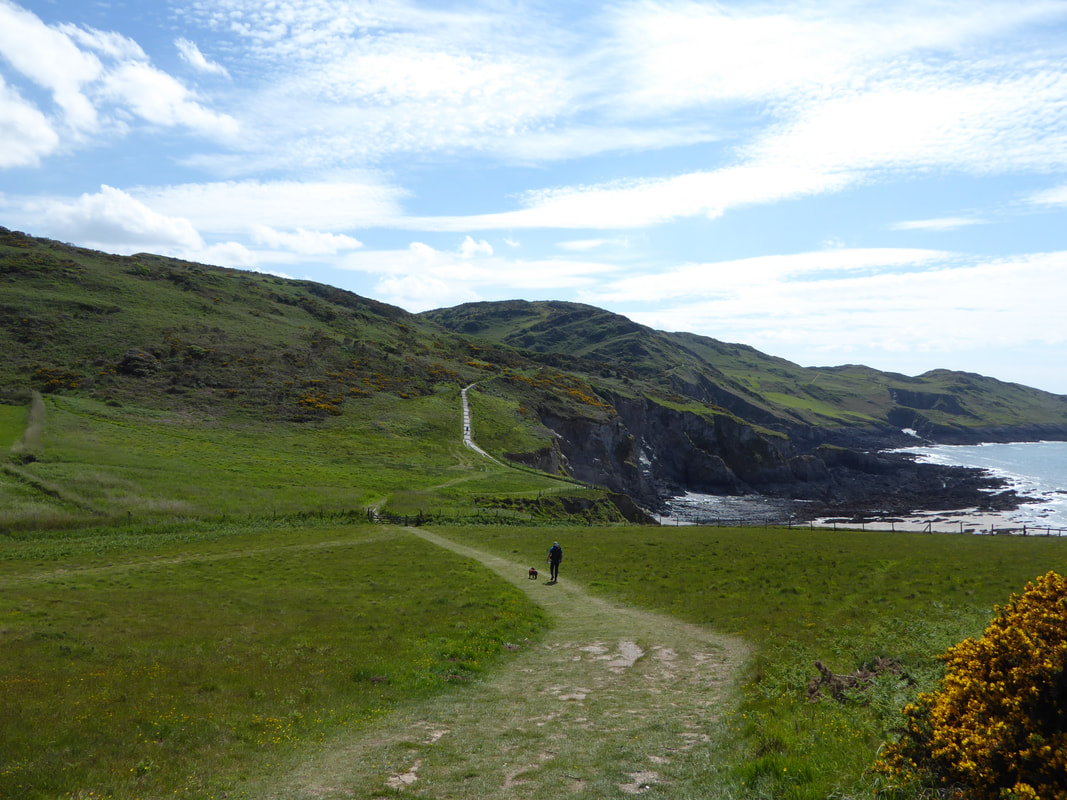 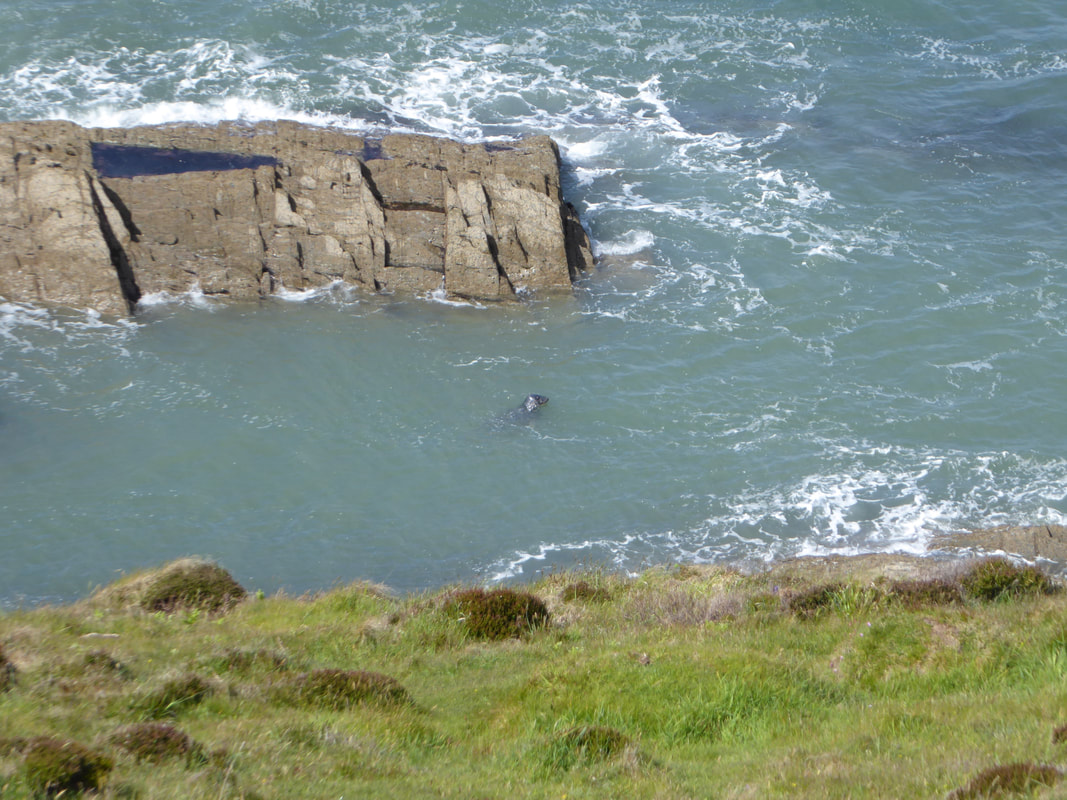 Our first seal near Morte Point 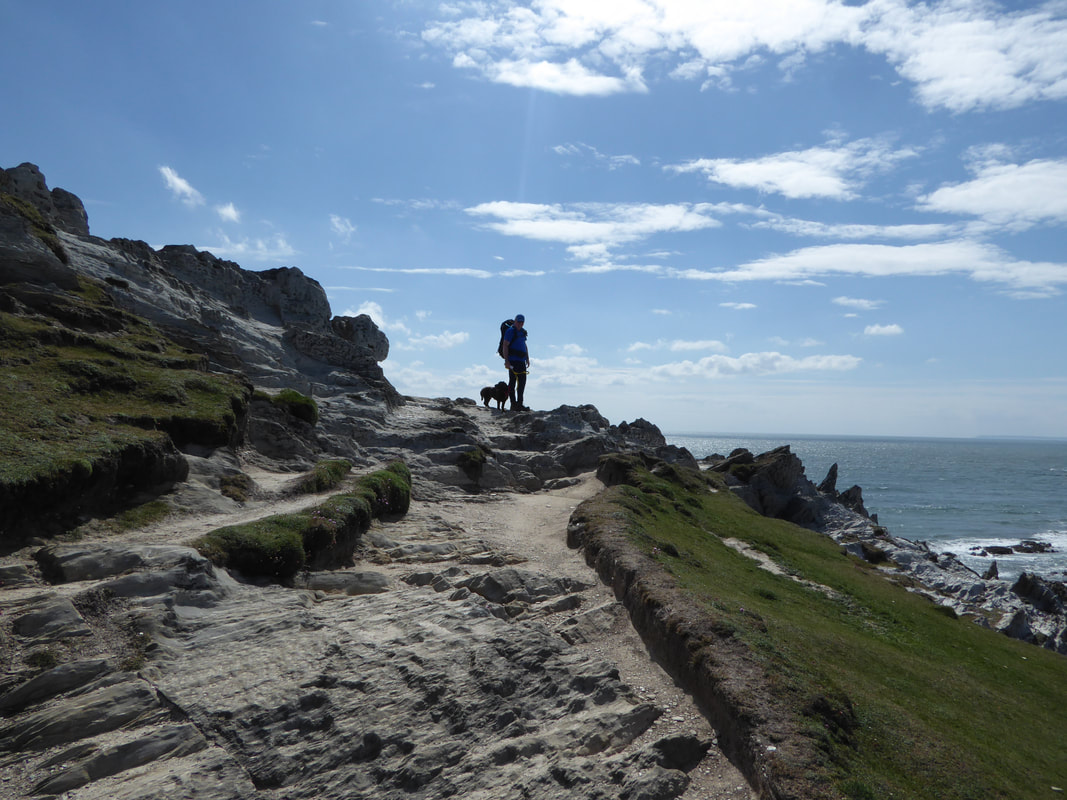 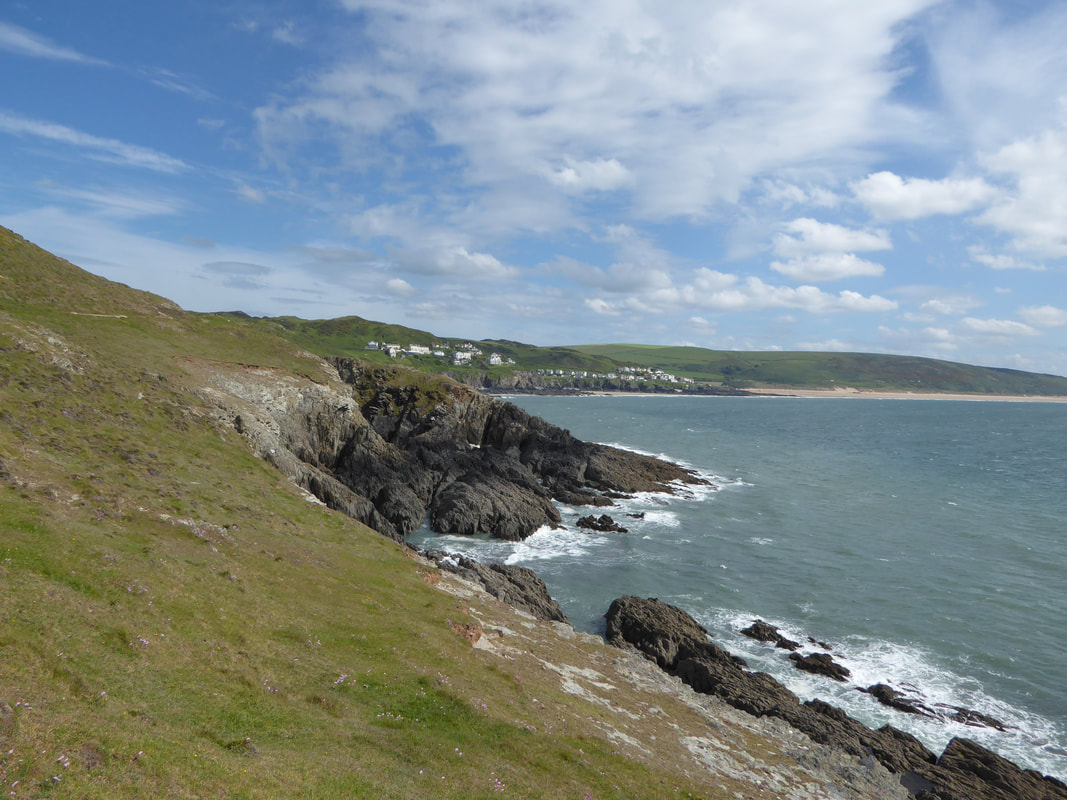 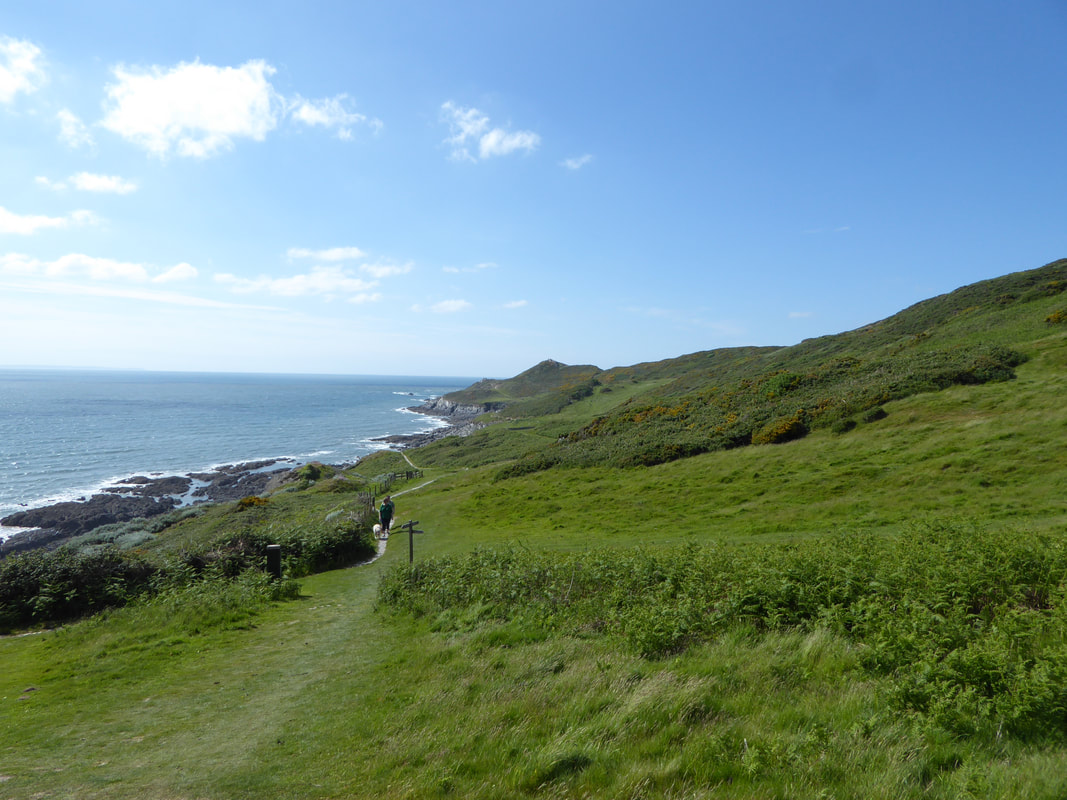 Looking back to Morte Point 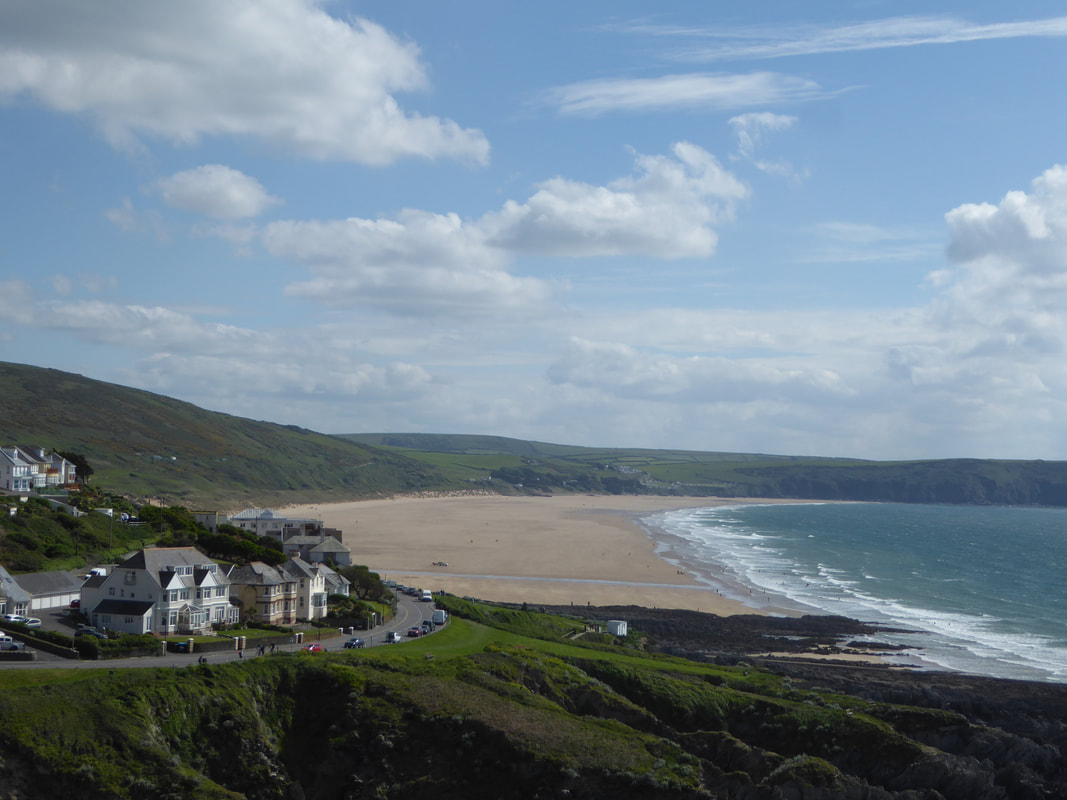 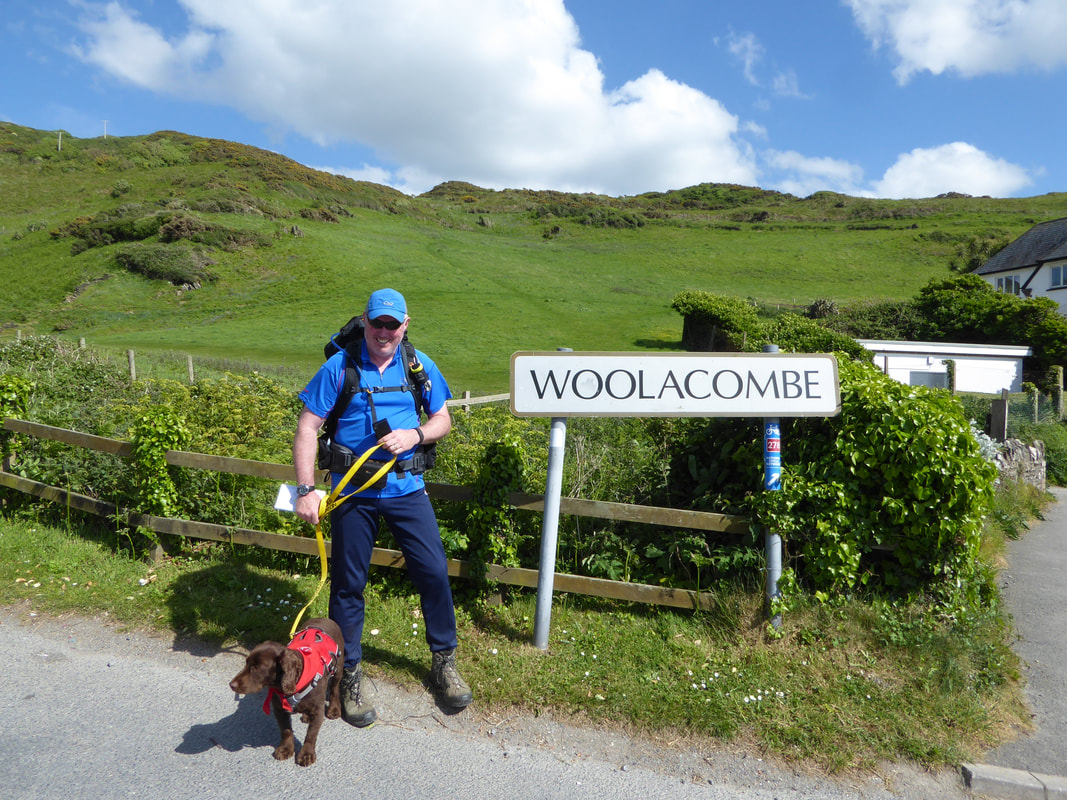 Still a good 3 hours walking ahead as we reach Woolacombe 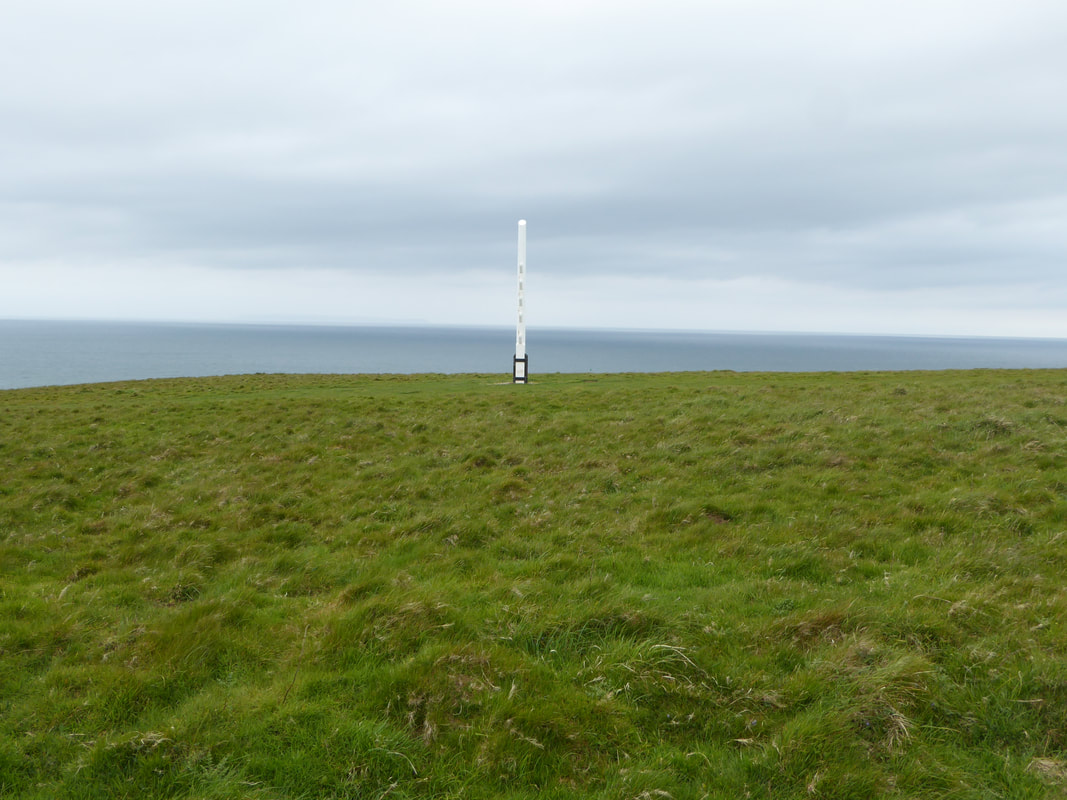 The Wreck Post near Baggy Point.  This post is the only one left in North Devon and was the forerunner to the zip slide.  It was installed by the Coastguard in the 1930s and was mostly used as a training tool whereby Coastguard volunteers would fire their ropes towards the top of the pole, simulating firing ropes up towards a ship that had been grounded on the rocks.  Once attached to the pole the ropes would be used to slide a “breaches buoy” over to the ship in order that stranded mariners could be winched to safety. 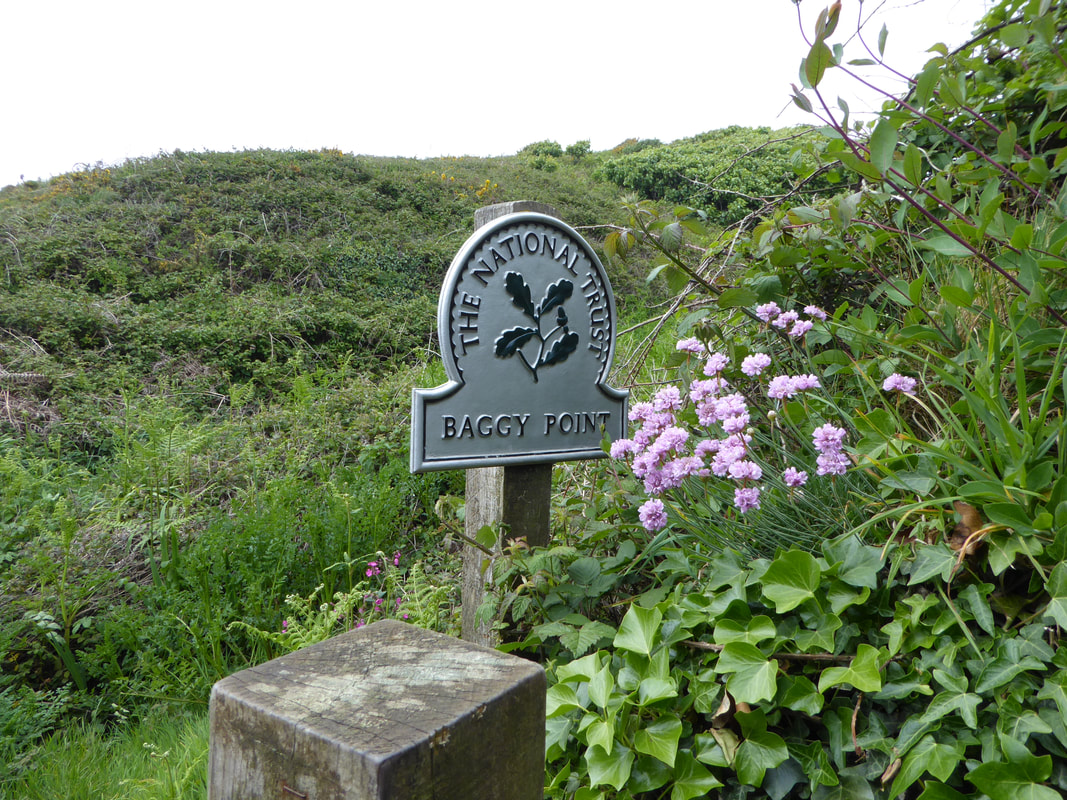 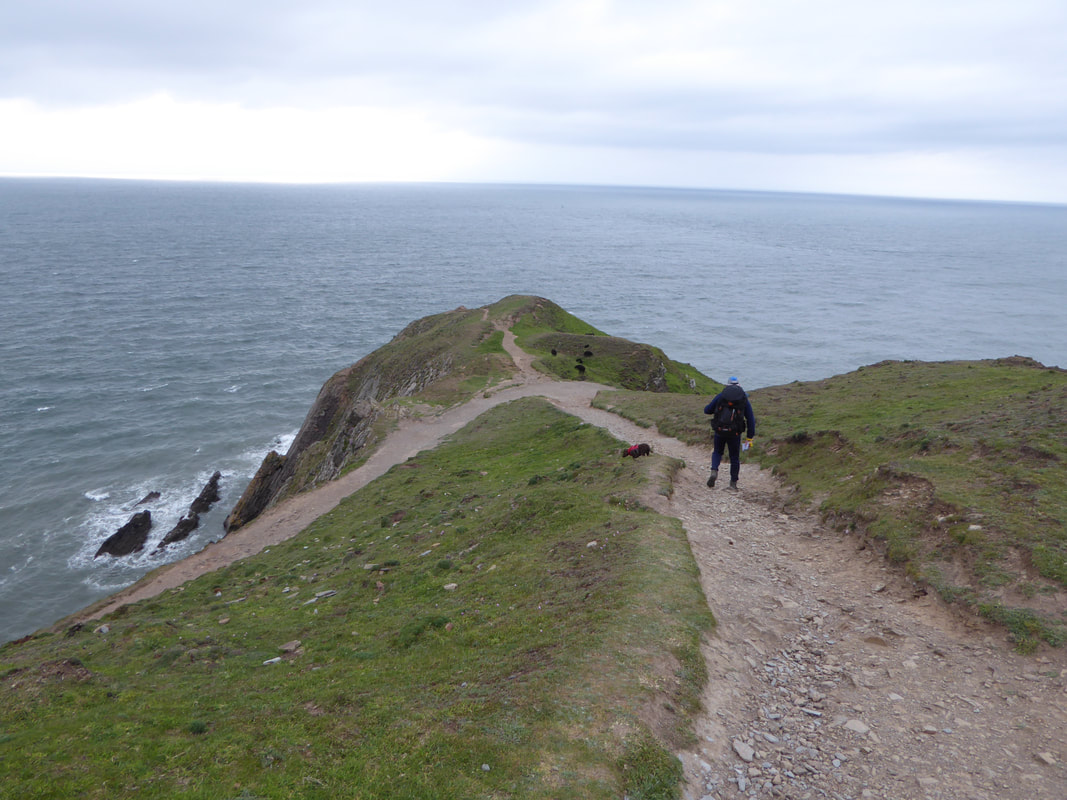 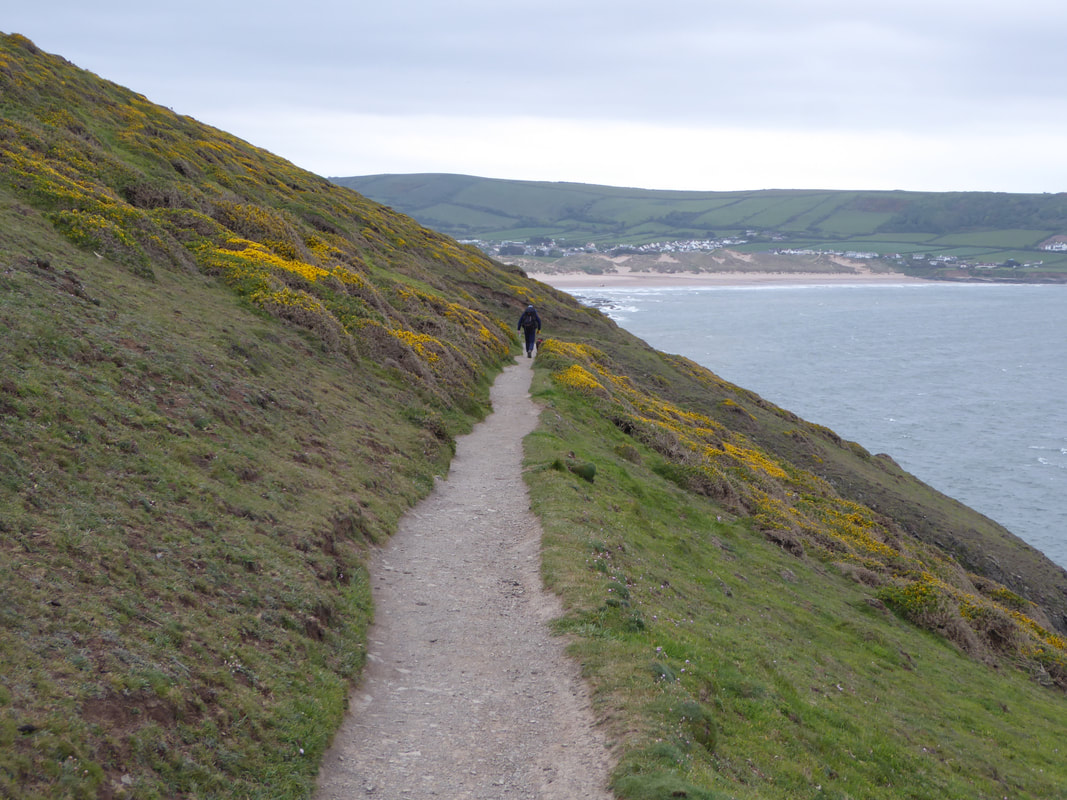 Croyde ahead - after 20 miles this was a welcome sight 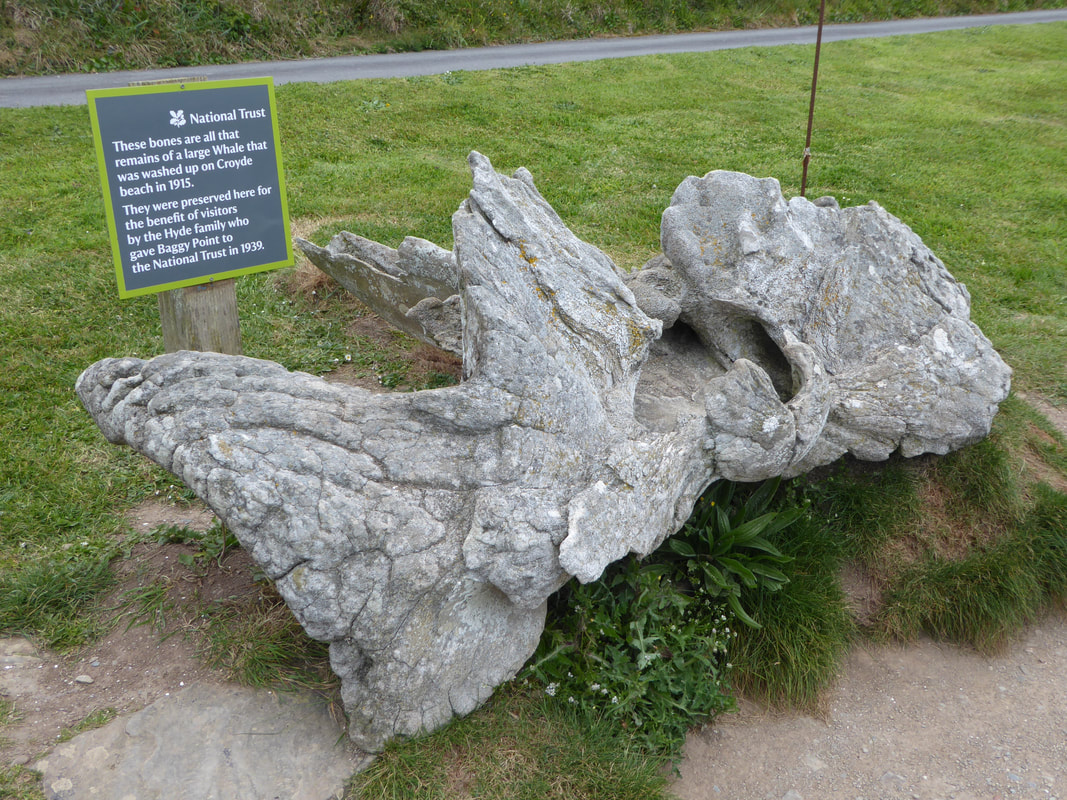 Moby all washed up 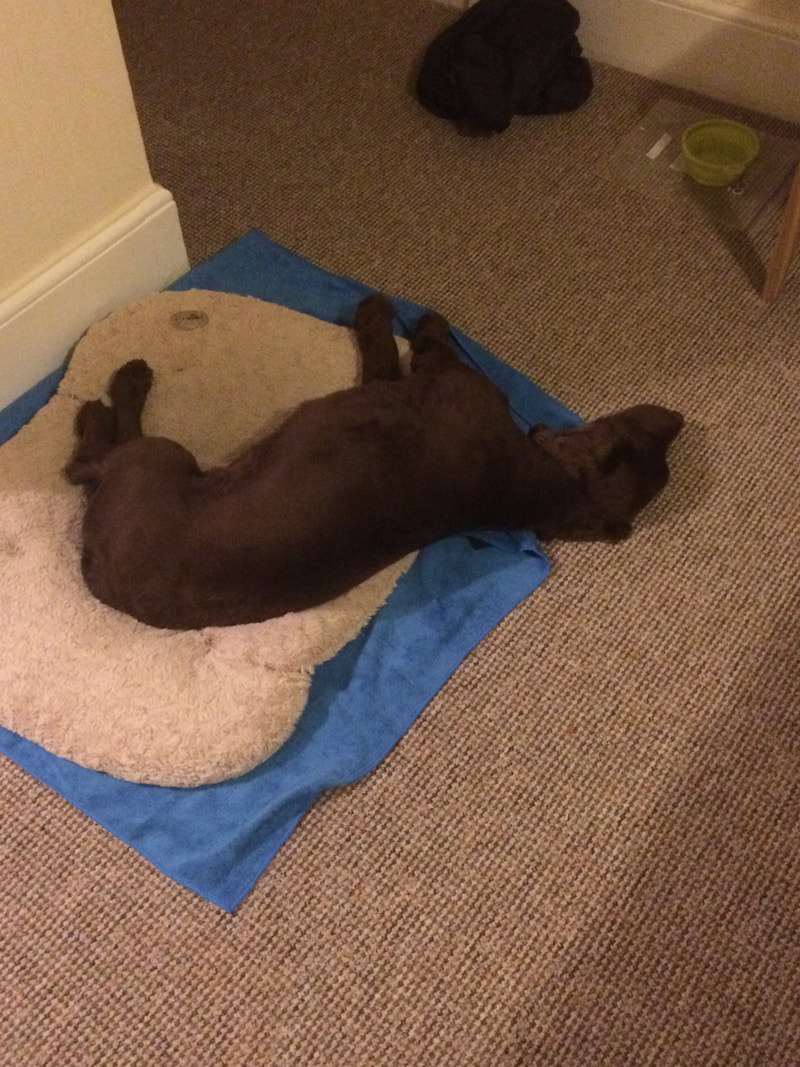