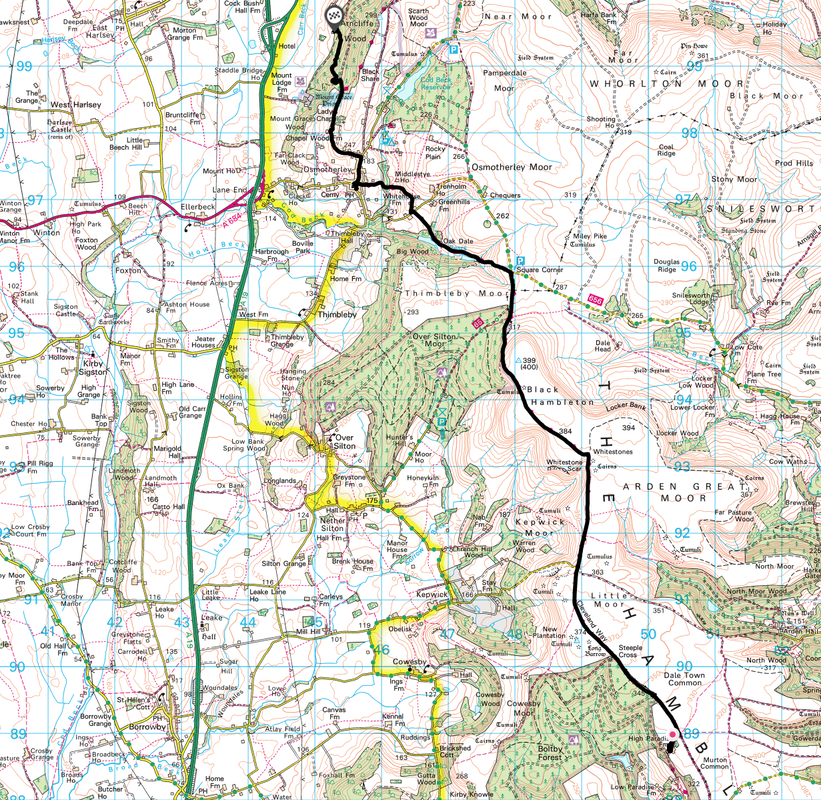 After a really good nights sleep we awoke to a pretty bleak day - mizzle (mist & drizzle) plus an overcast sky and so it would remain for most of today's walk. No matter - that is what long distance walking is all about. If the weather is poor then you just have to get on with it unfortunately - I suppose that's what makes it exciting - knowing in the planning stages that whilst every effort is made to make sure nothing goes without a hitch you just don't know what weather you are going to get. If this bothers you then maybe walking a long distance path may not be for you.

Tony & Judith were just leaving for work as we woke, however they left us some breakfast stuff before saying goodbye. After one more check of the kit and packing up the car with our excess kit we were off. Leaving the farm we immediately joined the Hambleton Drovers Road, a route drovers used to use in order to avoid expensive tolls on other, more lower routes. The drove road undulated slightly but was really very pleasant walking despite the lack of any sort of view due to the poor visibility. We soon arrived at Square Corner, had a light snack and then began a delightful stretch to Osmotherley through glorious woodland before arriving in the village to enjoy a nice cool drink in The Golden Lion. Next door to the pub is The Osmotherly Coffee Shop where we had a light lunch to then head off on the final couple of miles to Ingleby Cross.

Just out of Osmotherley we stopped and chatted to 4 chaps from London who asked us what we were up to - we told them about walking The Cleveland Way & Tabular Hills and the fact we were trying to raise as much as we could for Spaniel Aid. We gave them the details of our Just Giving Page and wished each other well. Near Chapel House Farm we found a welcoming committee of inquisitive cows who were gathered around the access gate with a "come and have a go if you think you are hard enough" look on their bovine faces. We gave it a few minutes and then I did the most honourable thing I could given the circumstances - sent Angie over the gate to sort them out which resulted in a safe passage for all.

We arrived at Park House at 1545 therefore sat on the terrace waiting for a sign of life as we could not check in until 1600 - we were having 3 nights here and had negotiated car transfers to enable us to base ourselves here as dog friendly accommodation was sparse between Ingleby & Saltburn. As the time for check in approached other walkers started to arrive - all walking Wainwright's Coast to Coast and we had a quick chat before Bev let us all in. It was good to see Bev & Mike again - this was the third time we had stayed with them and would unfortunately be the last as they were giving up the lease in October in order to move on and do other things.

After sorting ourselves out in our usual dog friendly room (Room 6) we enjoyed a lovely evening meal in company with our fellow guests - 4 x Swiss, 2 x Dutch & 2 x Canadians. The Dutch & Canadians were talkative and friendly however the Swiss mob were very aloof & uncommunicative for some reason - never mind. After supper we retired early, sorted out kit & admin - tomorrow we would be walking on familiar territory as the entire day of walking followed the Coast to Coast route which we had completed in 2012  & 2016. ​ 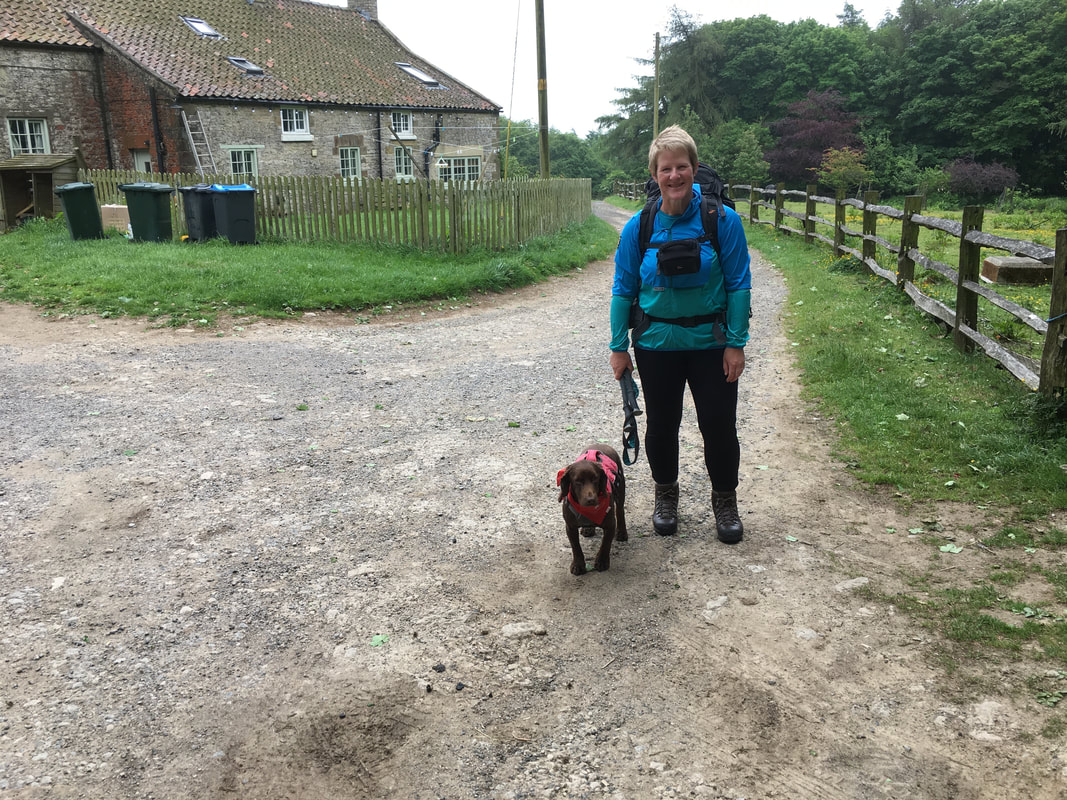 All ready for the off at High Paradise Farm.  Fudge has that mischievous "I can't wait to start arsing about" look in his eye. 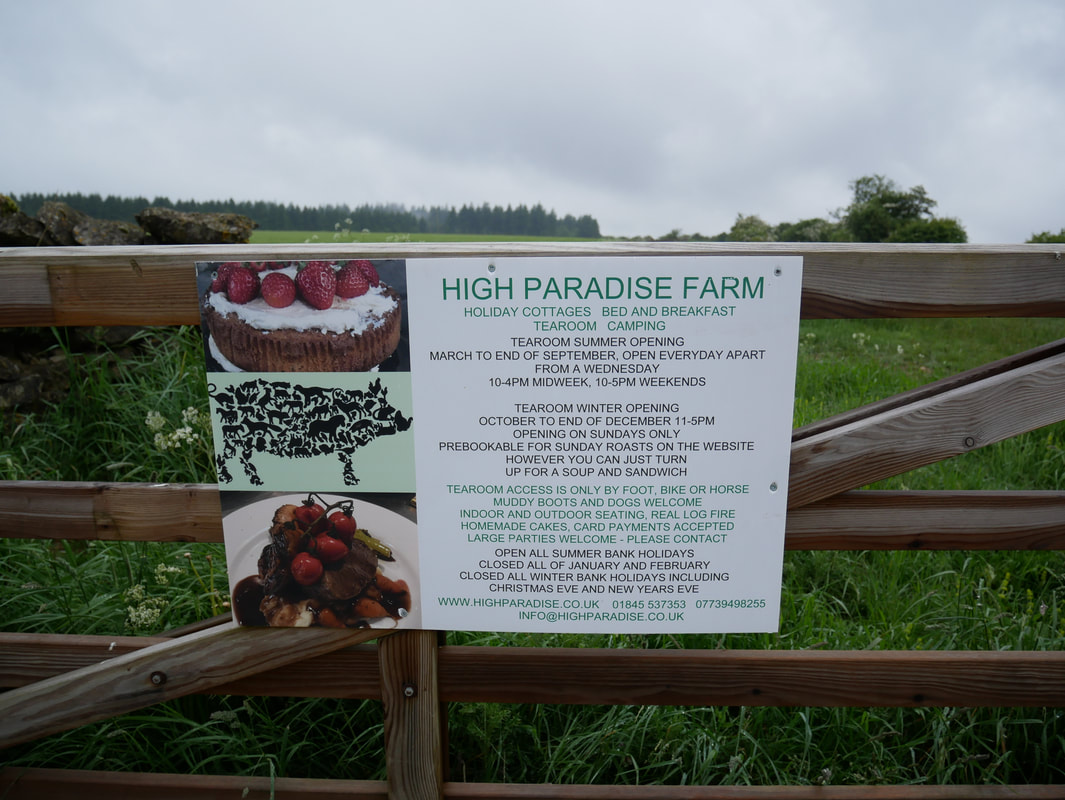 Worth popping in if you are passing this way 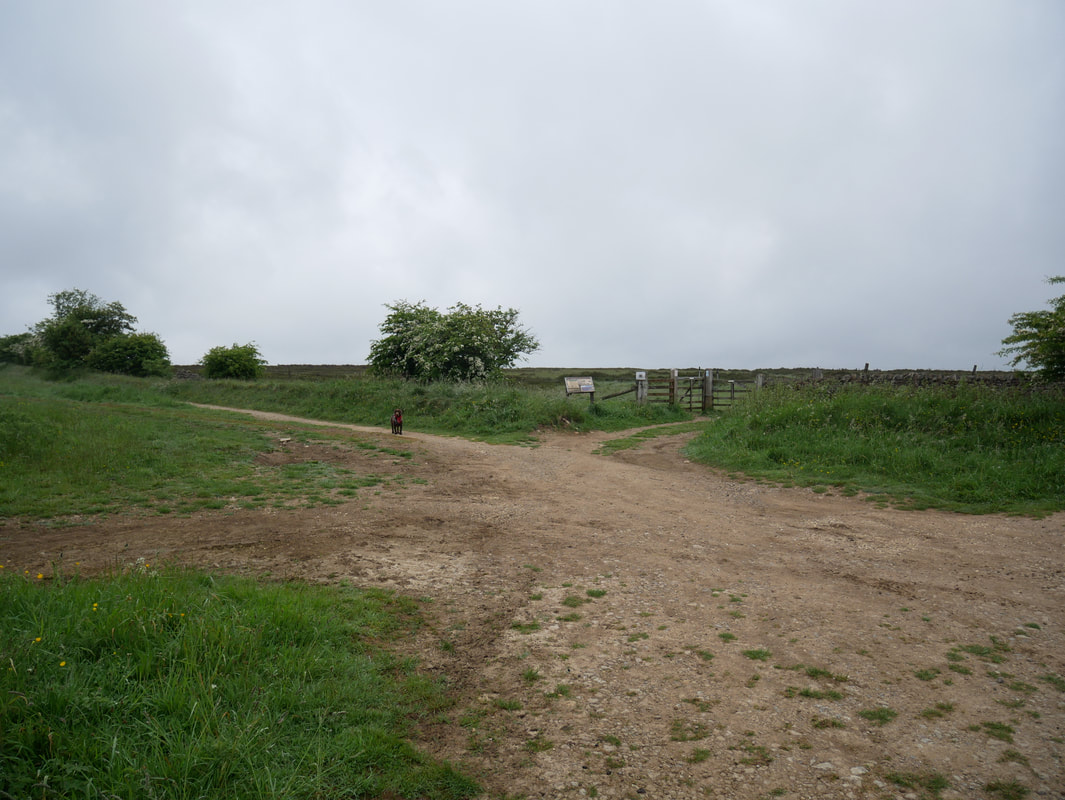 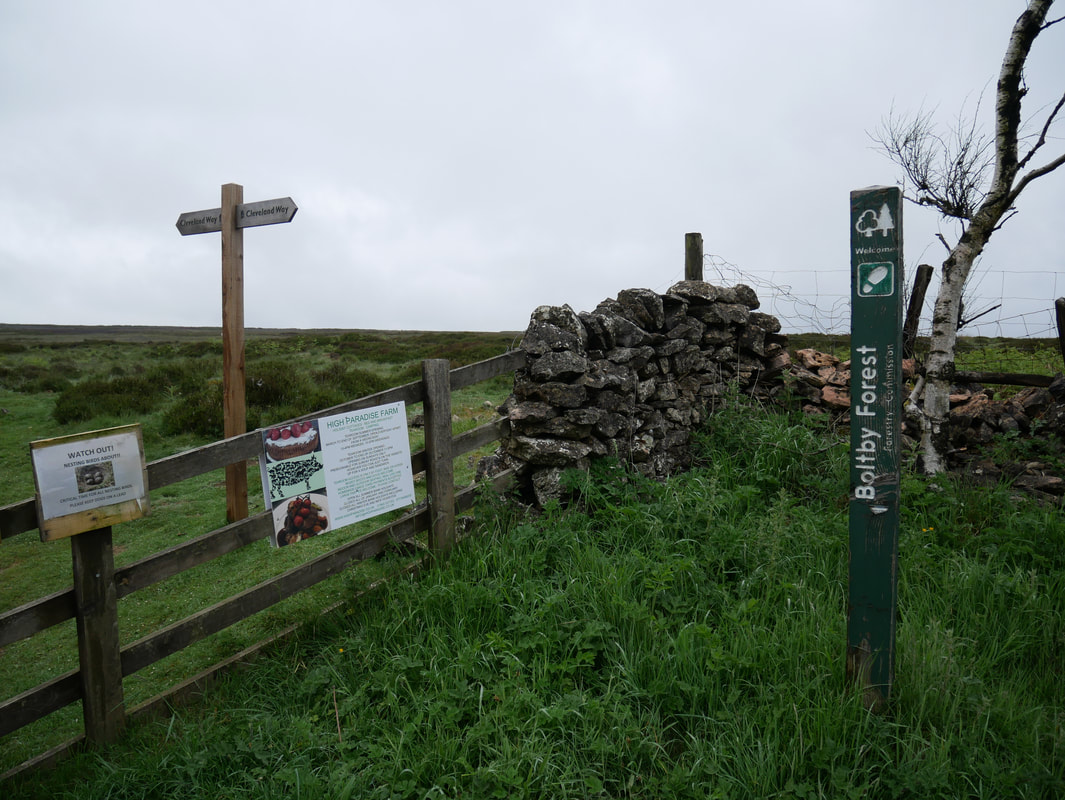 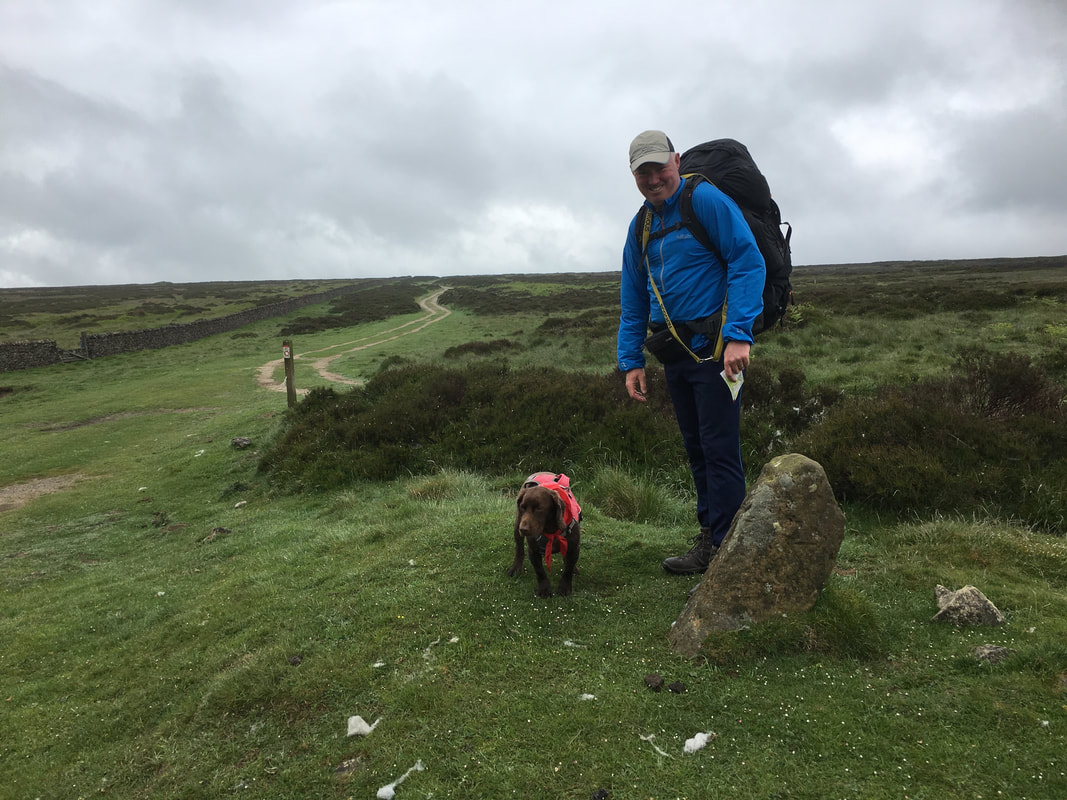 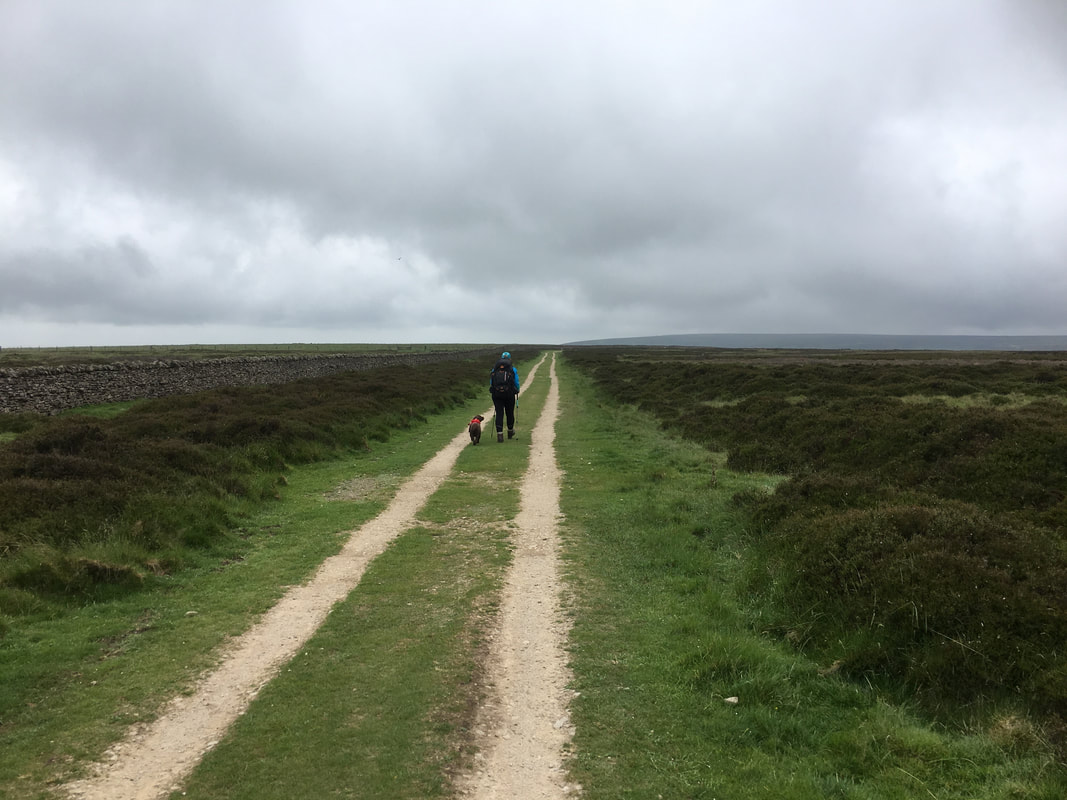 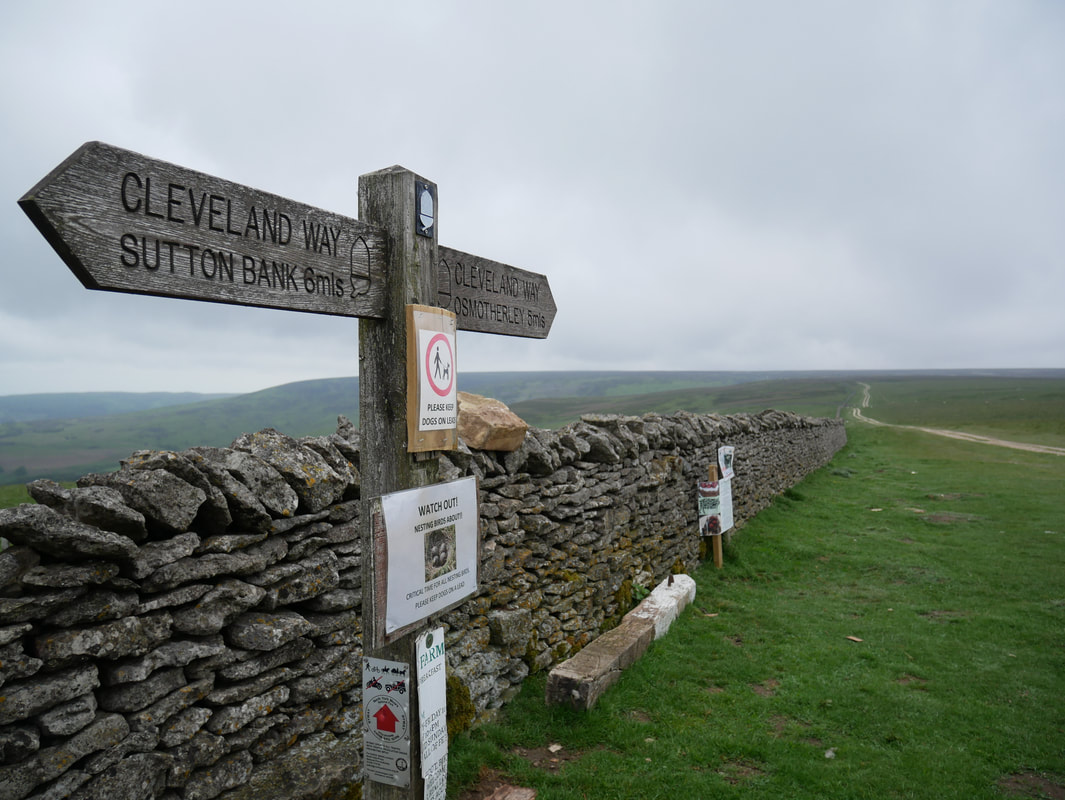 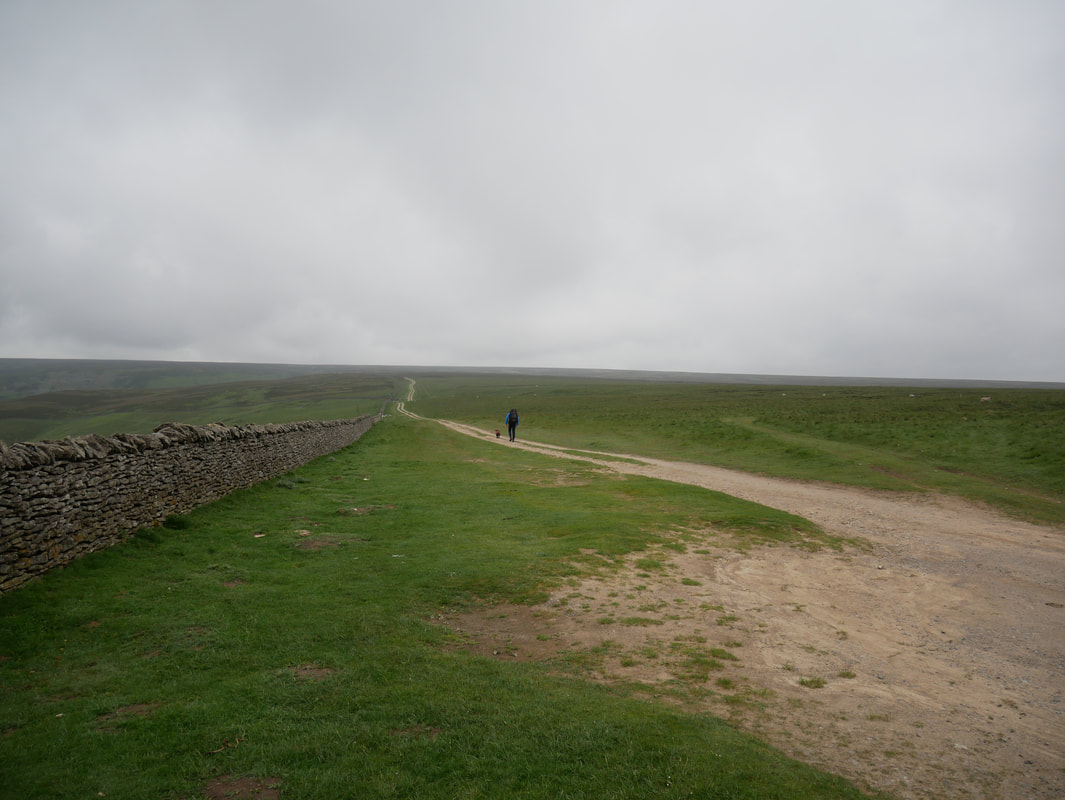 Just a big load of nothing out there 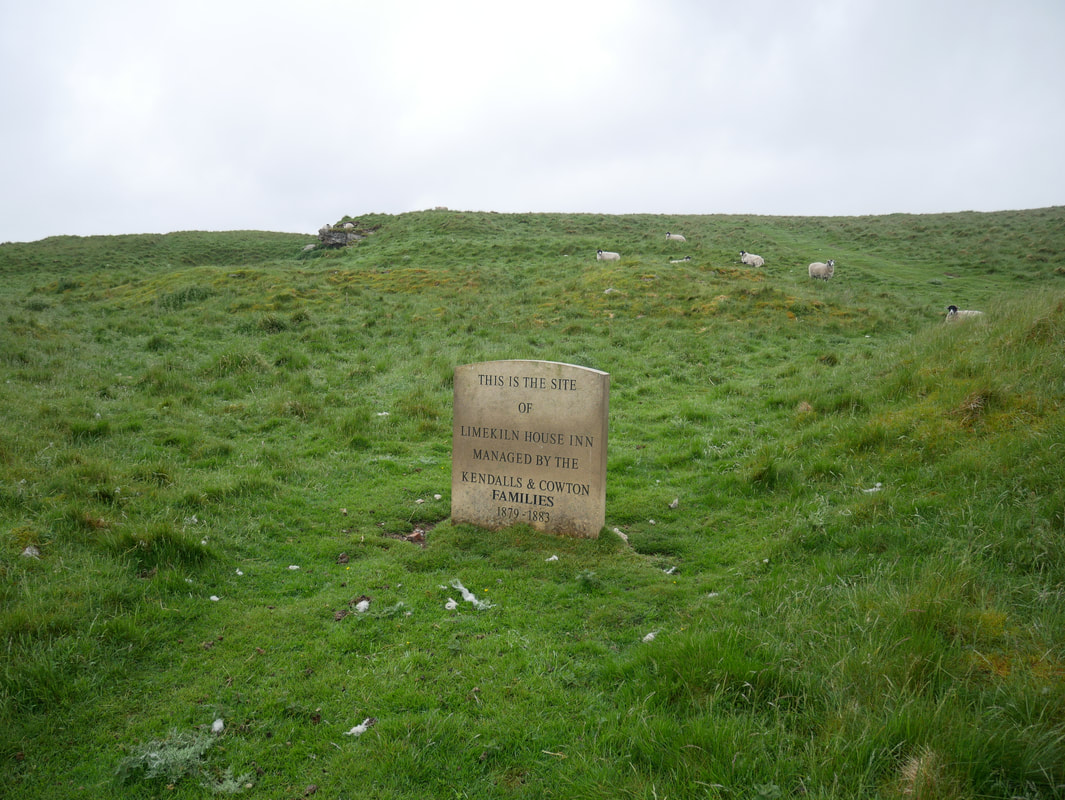 Hard to believe there used to be a pub here.  As you can see, some of the locals haven't gone home yet. 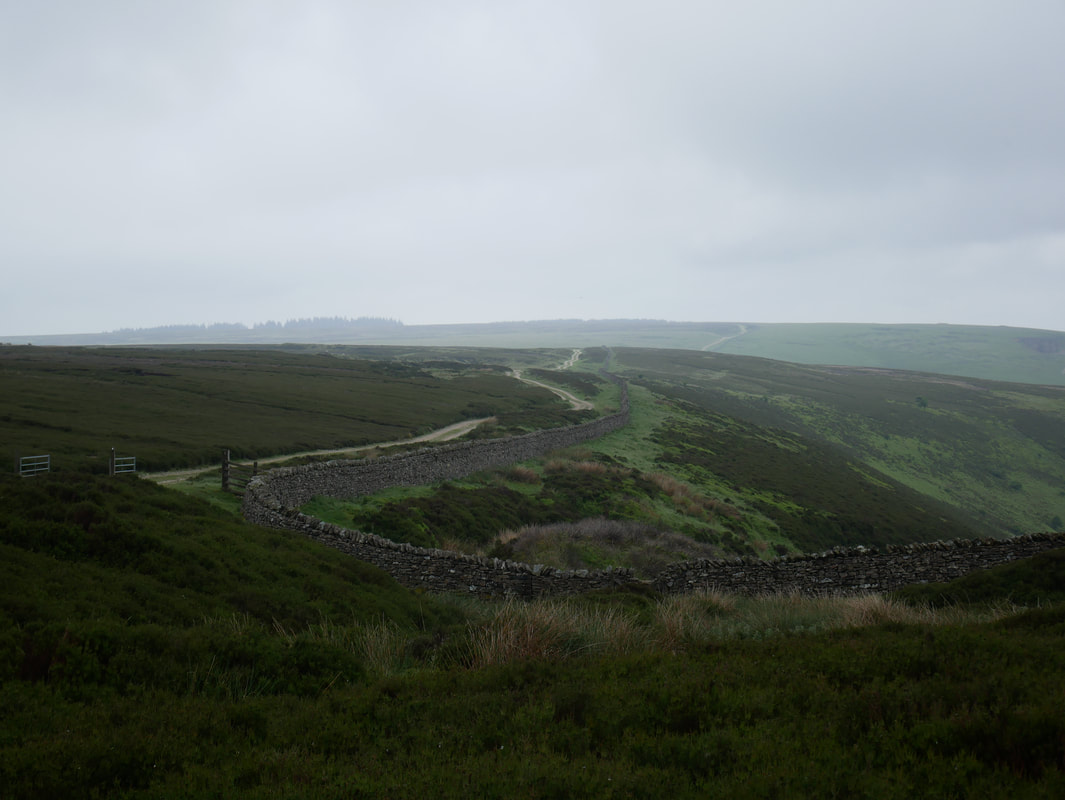 Looking back along the Hambleton Drove Road from Whitestones 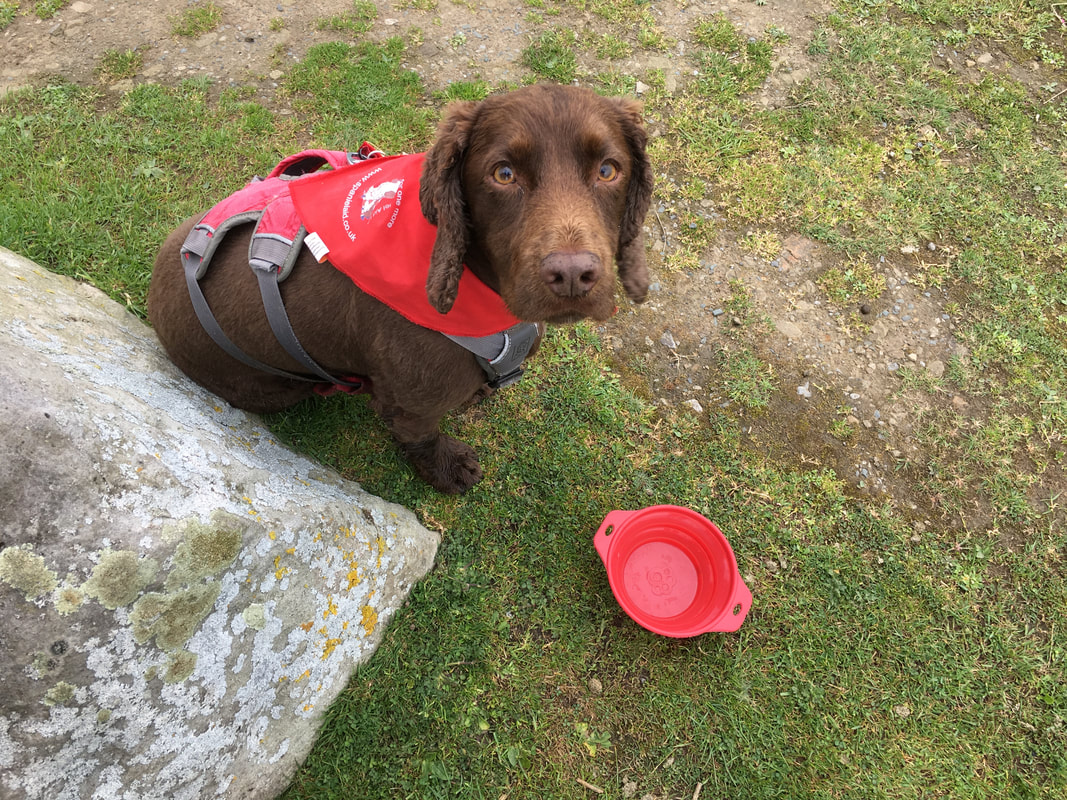 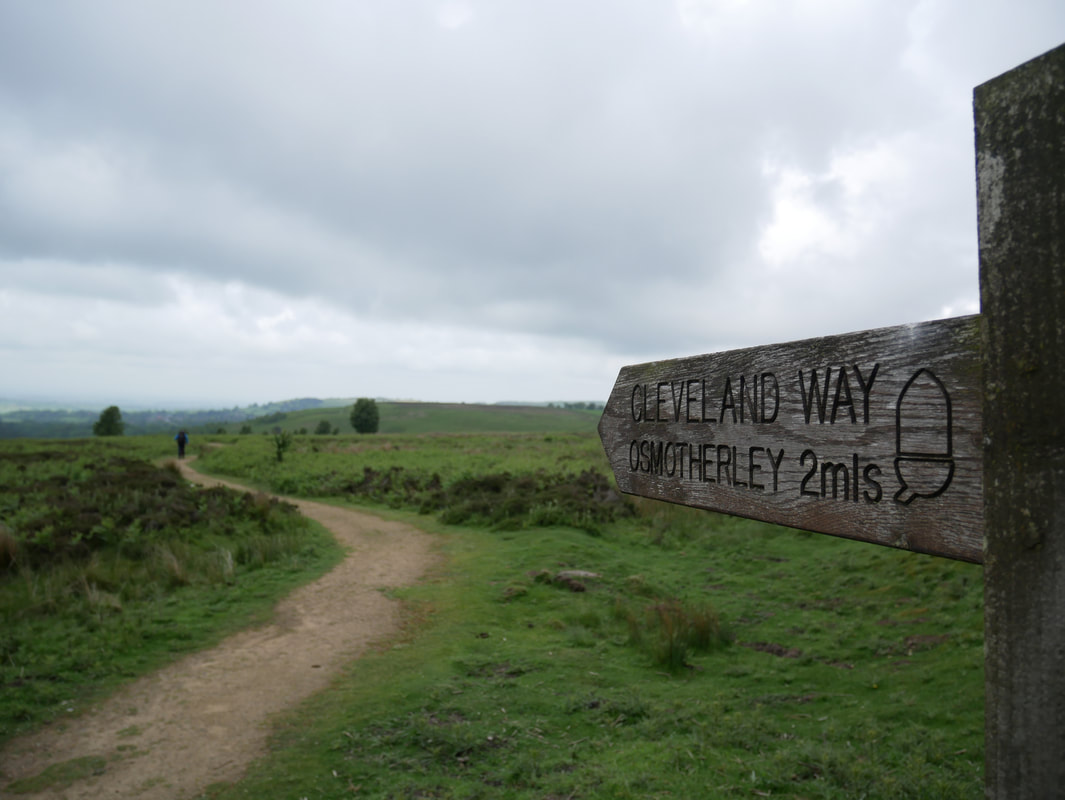 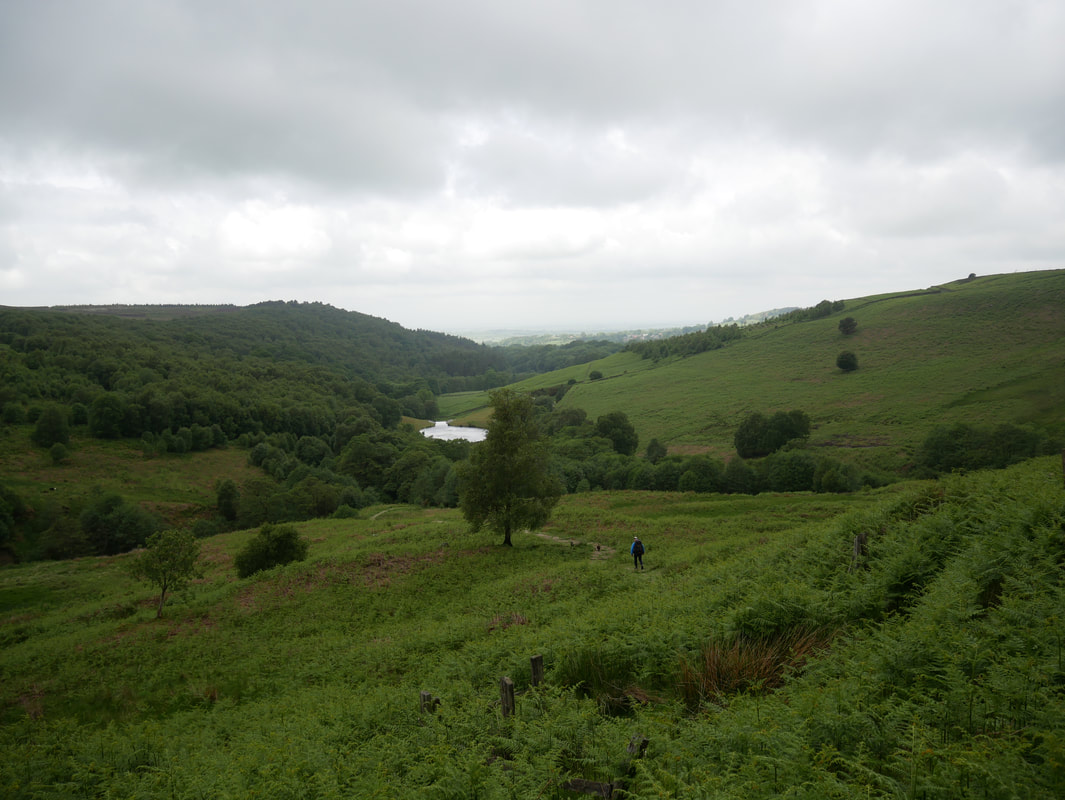 Dropping down to Oak Dale 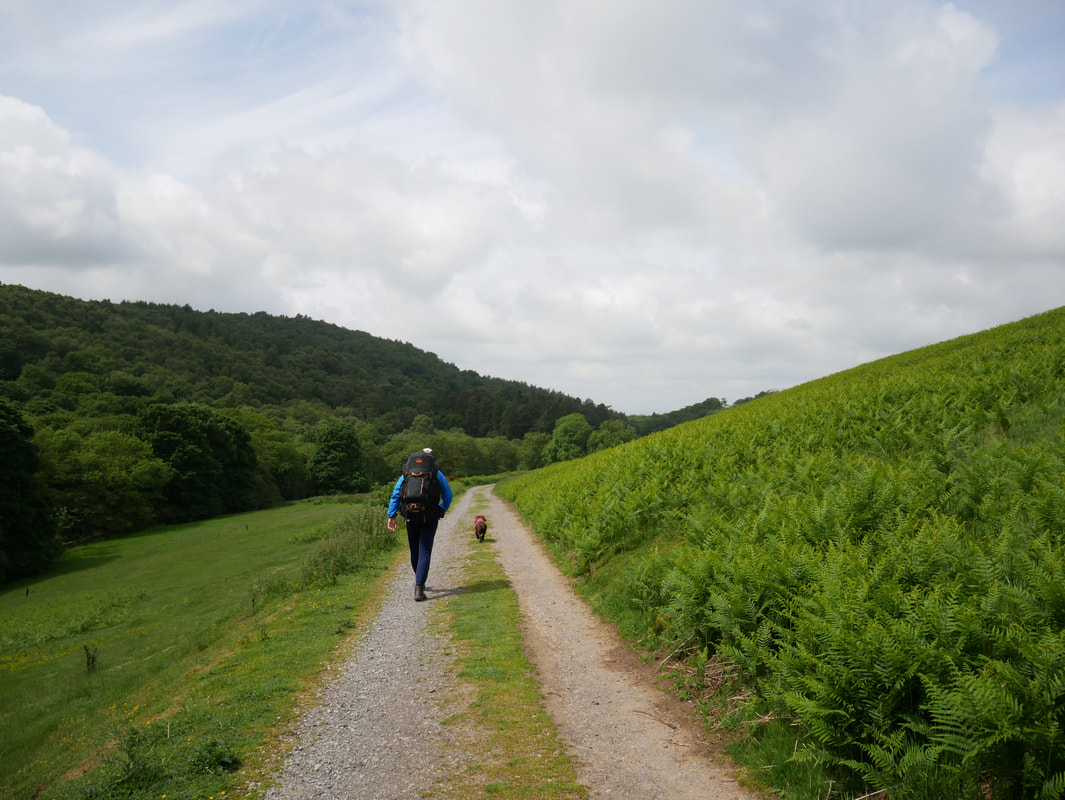 Fudge as usual is showing the way as we near Osmotherley 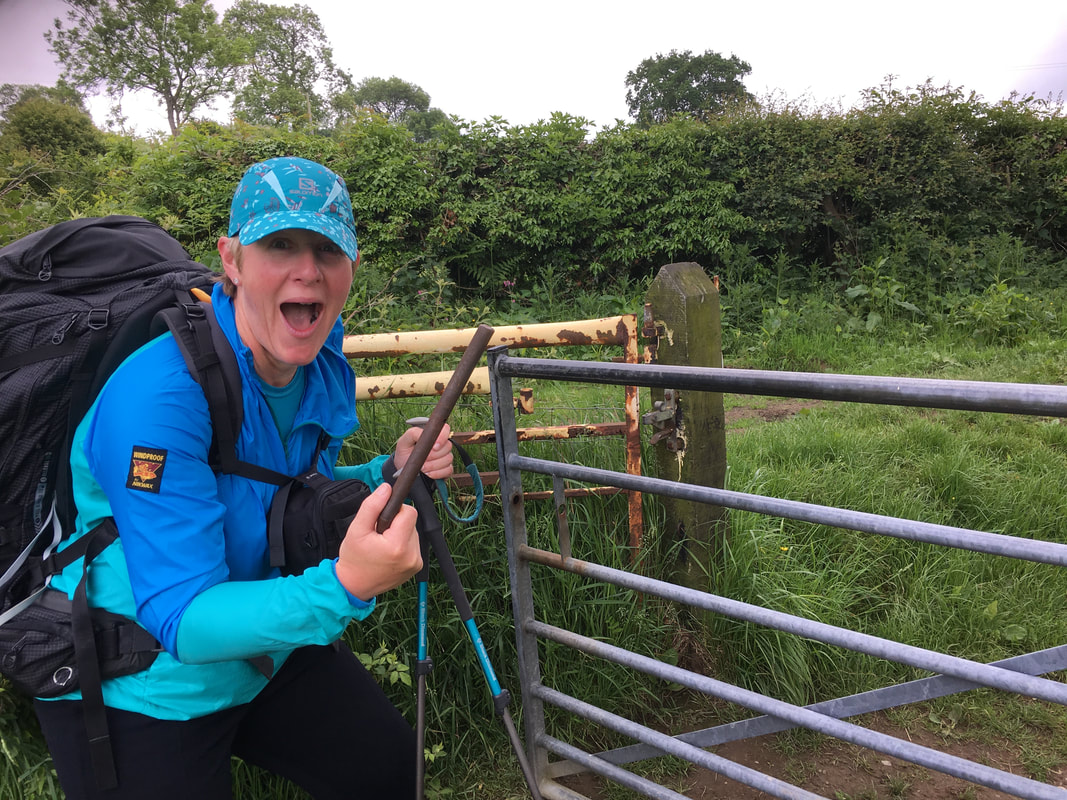 Honestly - it come off in my hand Chief !! 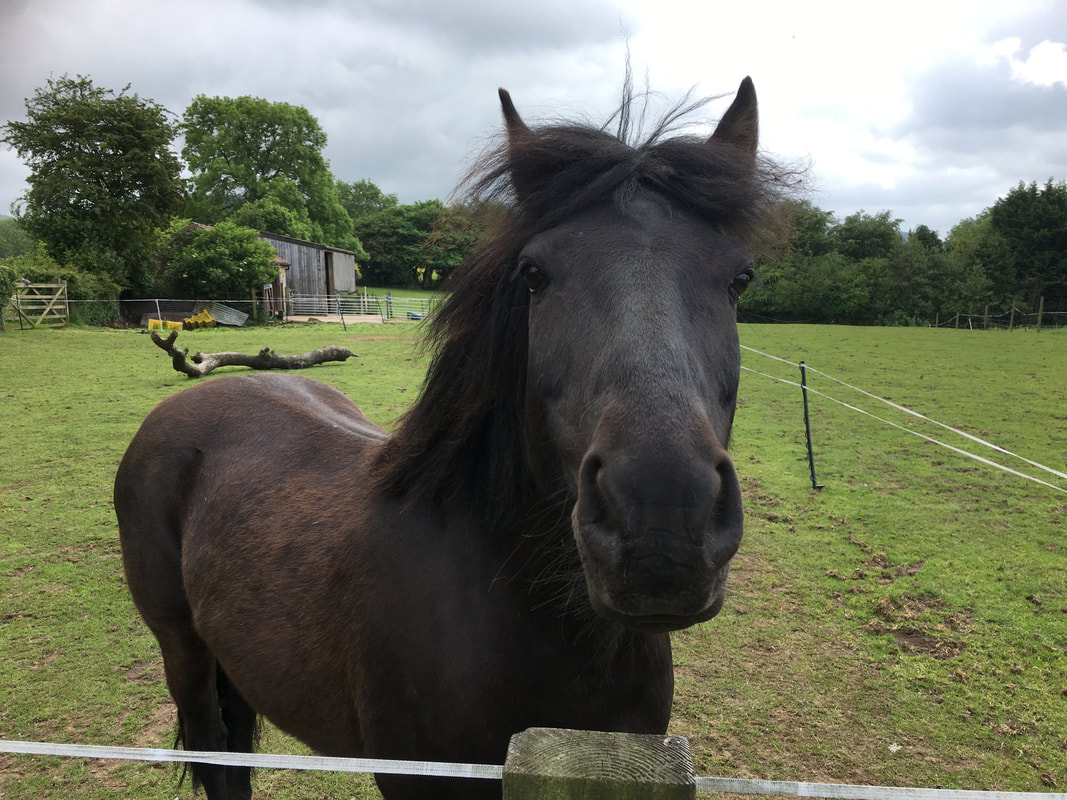 This gentle chap was very pleased to say hello to us 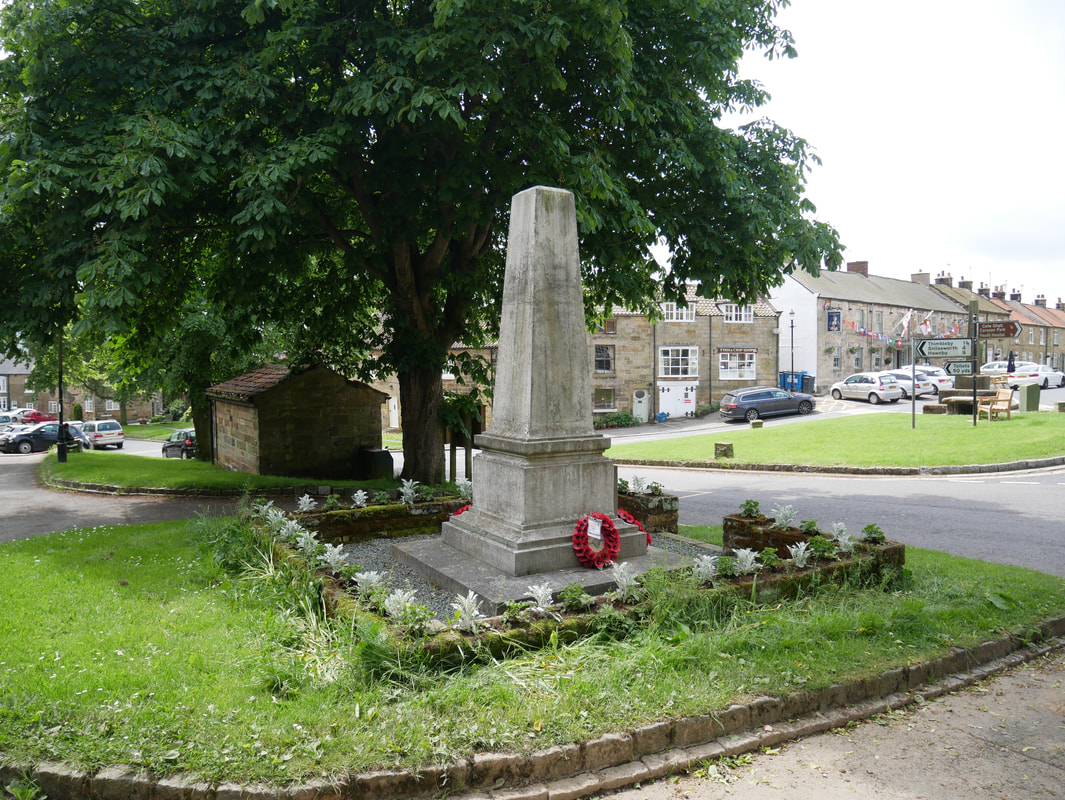 The War Memorial in Osmotherley 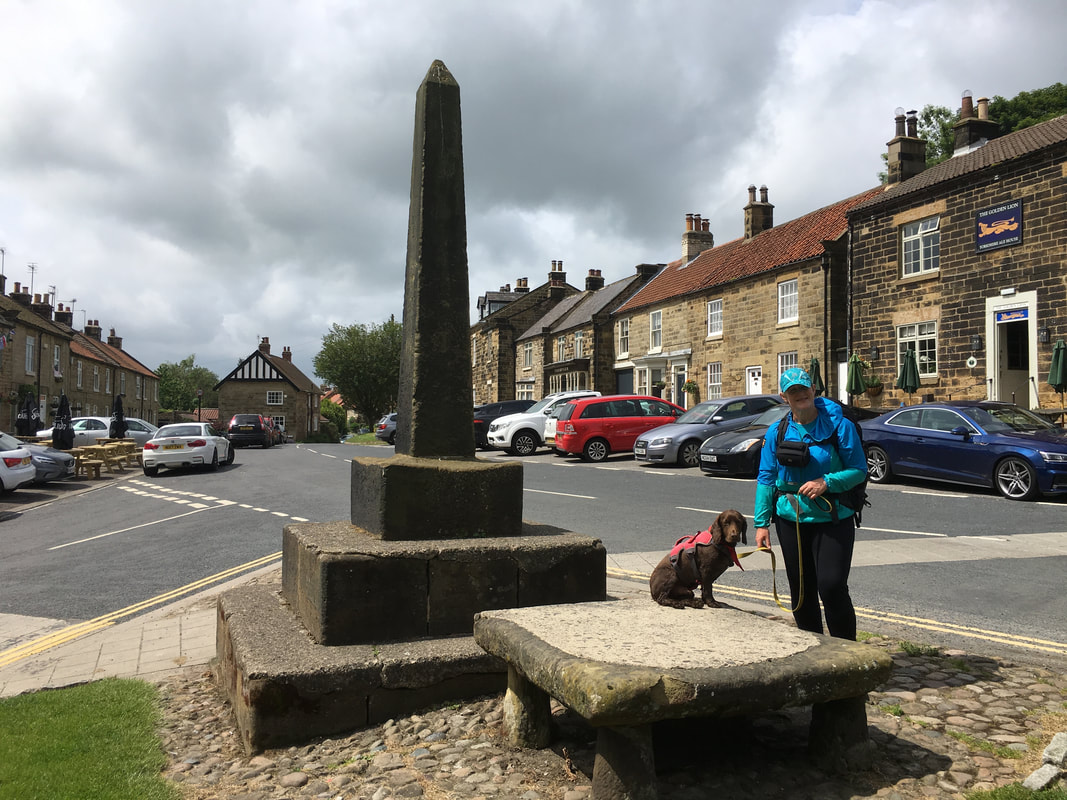 The Market Cross & Stone Table in Osmotherley - in days gone by, baskets of market produce would be sold from here 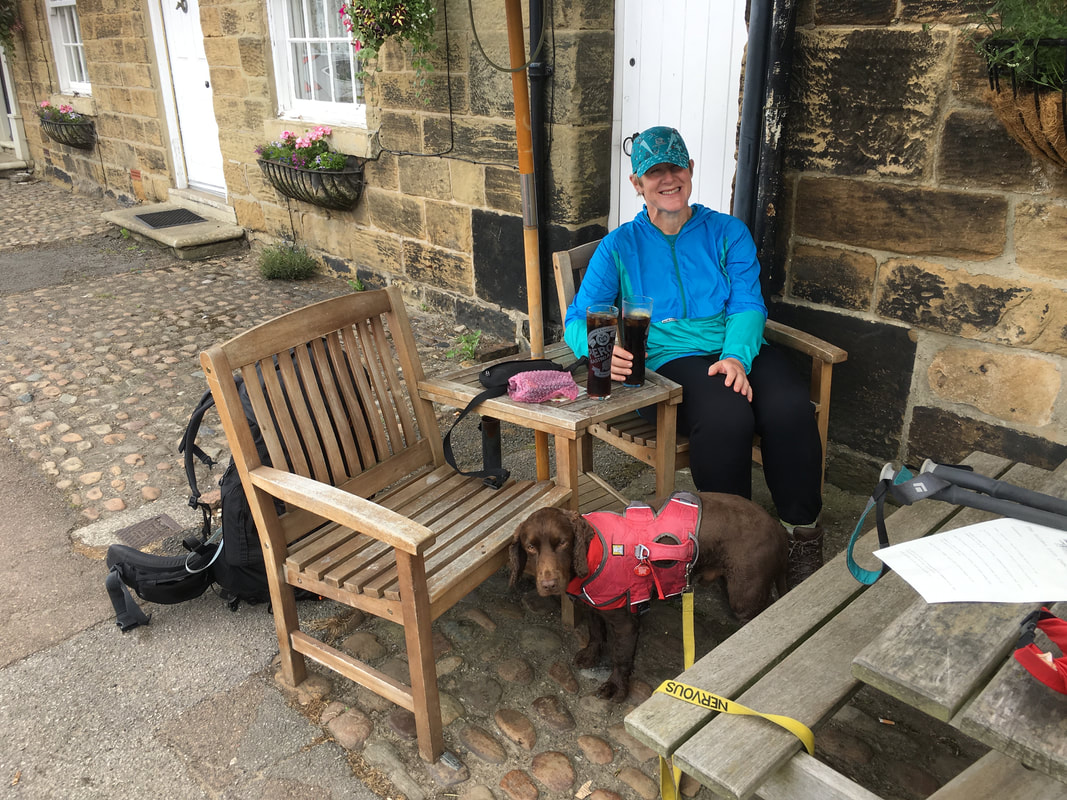 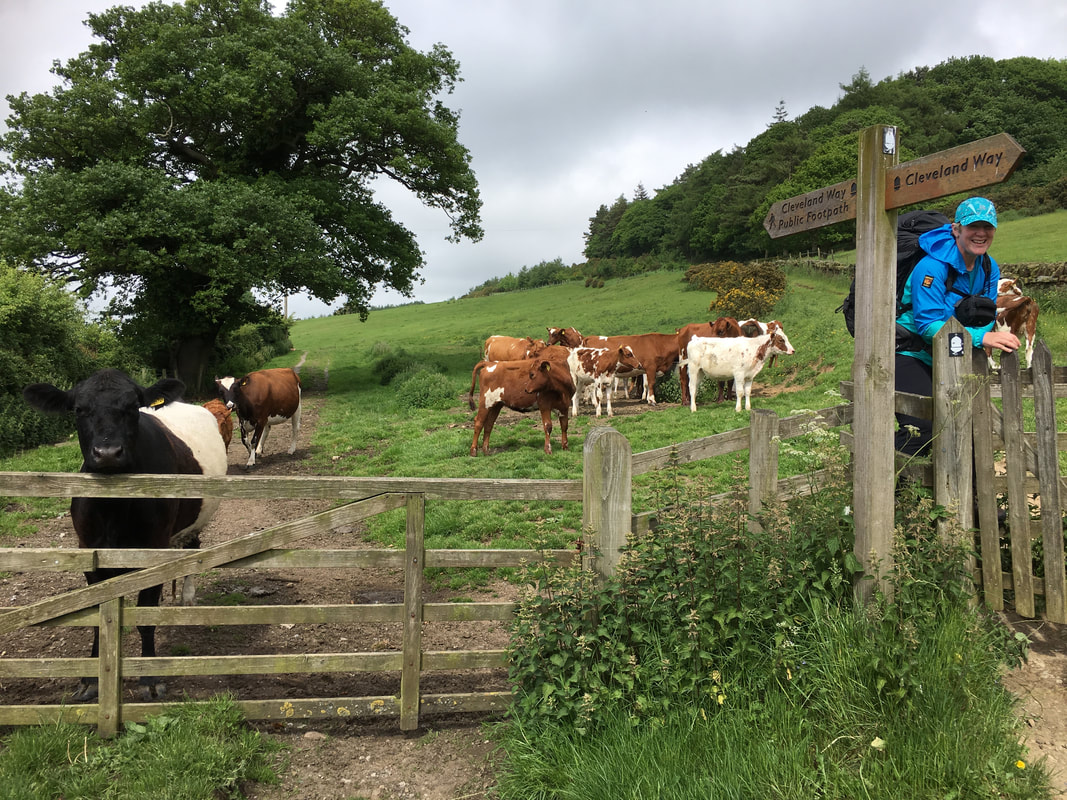 Gently does it love.  This lot were actually quite placid and were just simply curious. 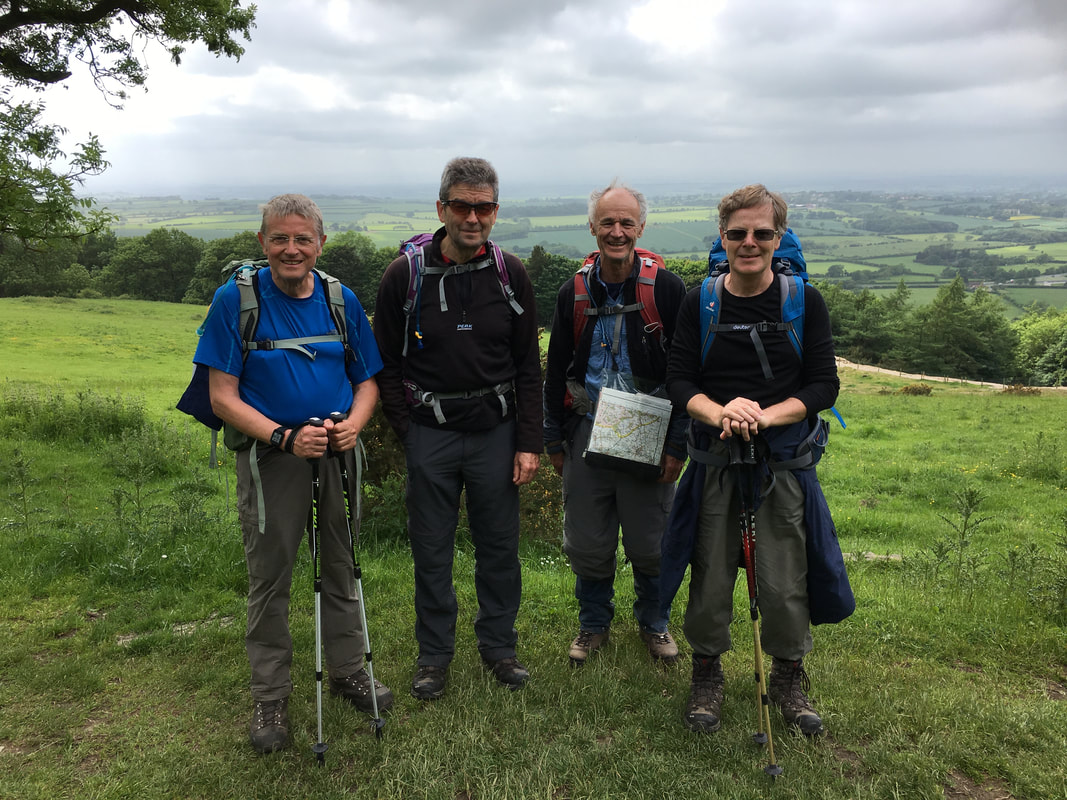 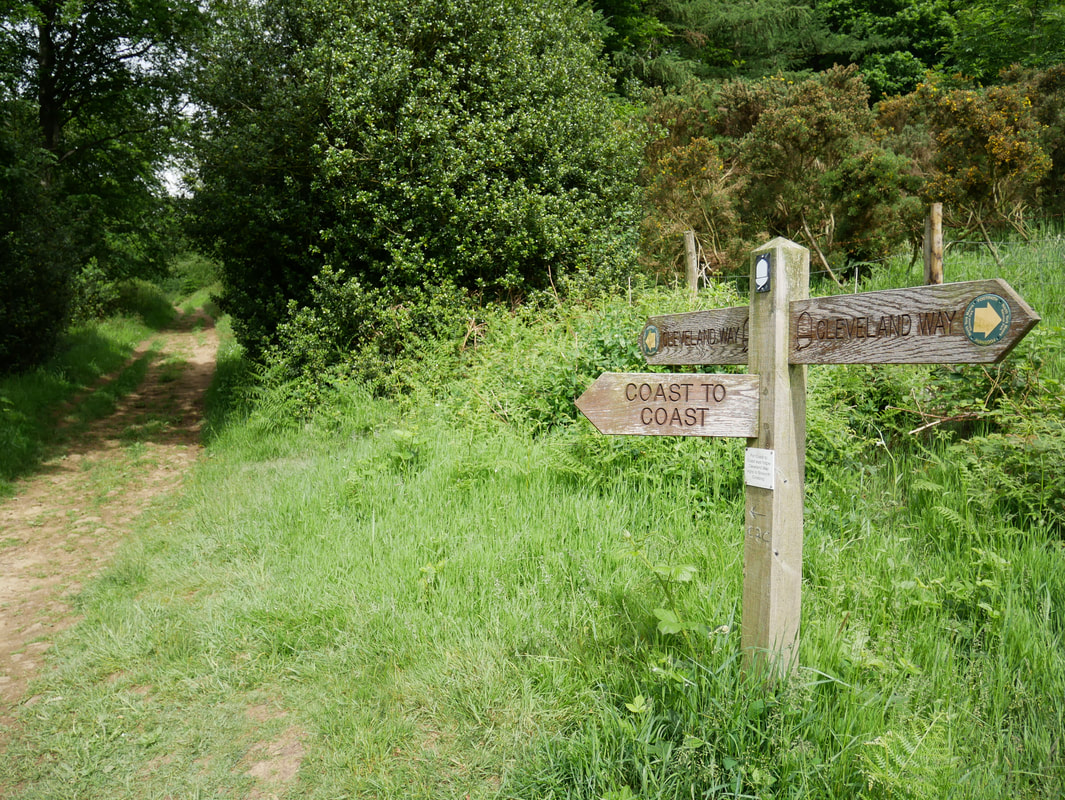 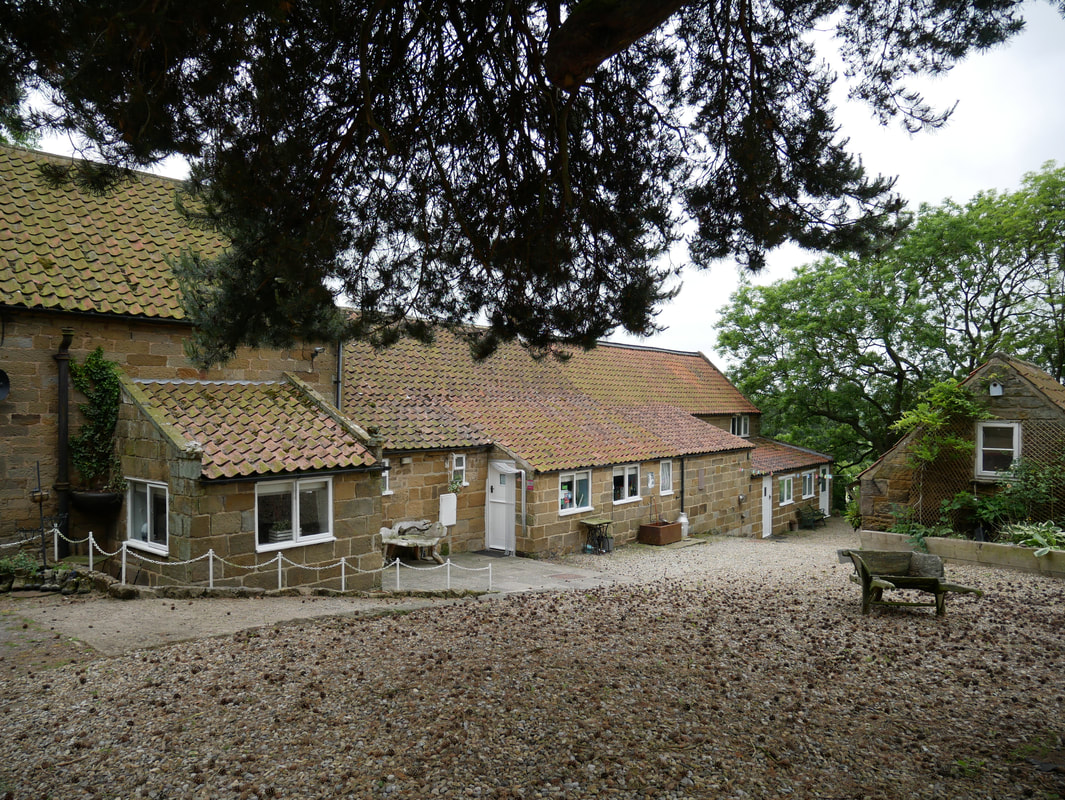 The Marie Celeste - we were slightly early at Park House 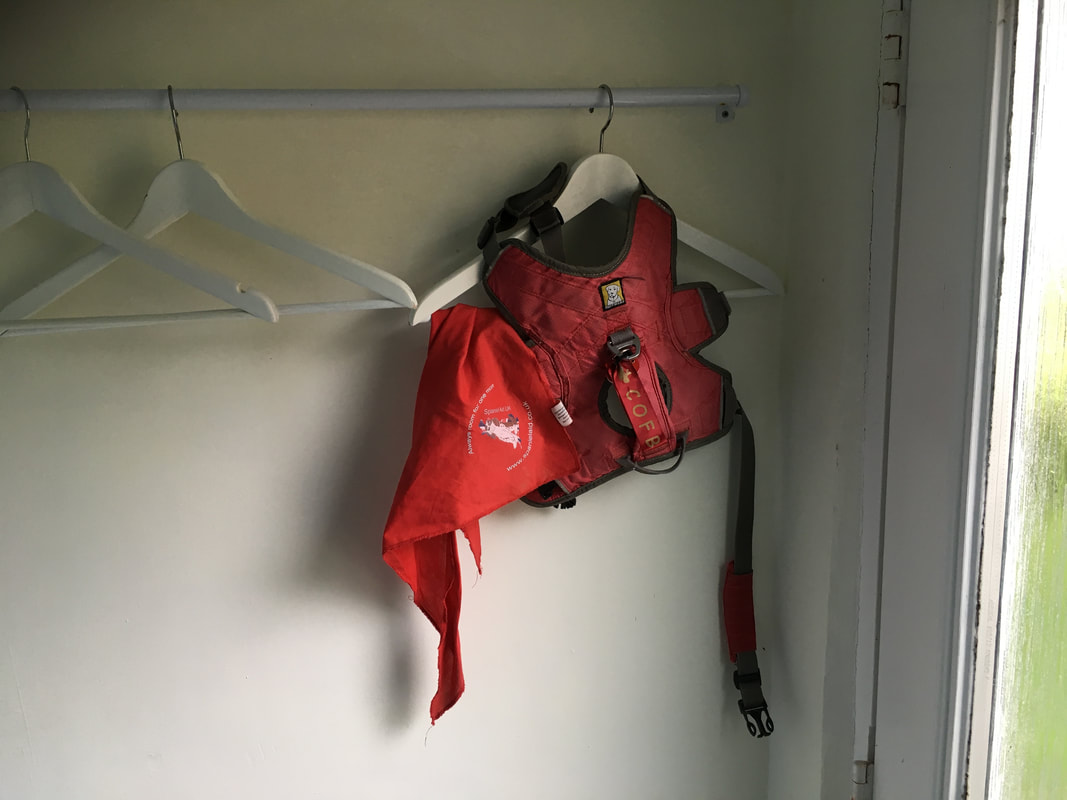 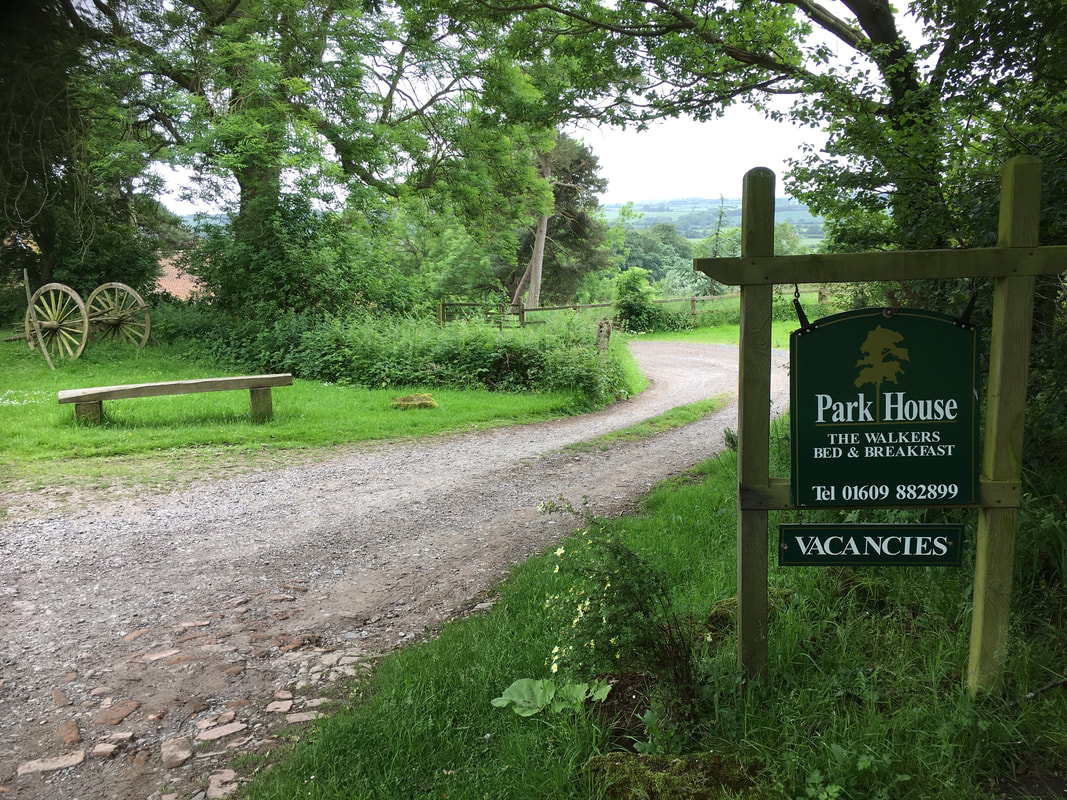