​The Pennine Way is a beautiful thing
In summer, autumn, winter, spring.
As the clouds dance across the Pennine sky
And the wild birds wheel past the walker’s eye.

Following on from our Dales Way walk in 2014 we decided that 2015 will be the year we would tackle The Pennine Way. We have walked a fair bit of the route already, albeit in dribs and drabs. The walk covers some 270 miles, give or take a few miles depending on route diversions etc but in the main it is considered one of, if not the most challenging Long Distance Paths in the UK. If the weather is kind then all should be plain sailing but you can never trust the British climate and the Pennines is no place to be when it is inclement, particularly in some of the more desolate and inhospitable areas the Way passes through.

​We will be attempting to raise as much money as possible for 2 charities - Cocker & English Springer Spaniel Rescue and a local cancer charity called The Bracken Trust.

About The Pennine Way

The original idea for the Pennine Way was first mooted by walker and journalist Tom Stephenson in a 1935 article for the Daily Herald. He famously titled the article ‘Wanted: A Long Green Trail’. At this time there were no official long distance footpaths in the UK. ​According to author Bill Laws, Stephenson was motivated to campaign for wider access across the hills by a conversation he had with a gamekeeper on the summit of Whernside:

‘Dost tha’ know tha’ art trespassing?’ the keeper asked him.
‘Aye, what are you going to do about it, prosecute or shoot?’ said Stephenson.
‘Nay,’ replied the keeper. ‘It’s aw reet as long as tha knows’.
​
It took 30 years to bring his idea to fruition. Much wrangling and negotiation took place during that intervening period before the walk was officially opened on 24 April 1965. Therefore this is the 50th Anniversary since the Trail opened and it seems fitting we should attempt the walk this year.

Initially the path contained no asphalt or concrete and was much tougher than it is today. In the early days much of the transit was over terrain that tended to hold water thus the walk was more of endurance than enjoyment. Suffice to say, common sense has prevailed and in order to protect the landscape (and people's feet), much of the peat and bog is now slabbed, resulting in a much more pleasurable experience.

Why this particular Long Distance Path?

For one its a challenge both physically and logistically. Whilst the Dales Way was a superb walk, it was over all too soon and we really missed the longer walking challenge. Lots of people have completed The Pennine Way and remarked on how difficult it was, particularly when the weather turns and the mileage suddenly becomes a real factor in getting to your goal for the night. The Pennine Way has the lot - industrial scenery, beautiful valleys and mountains plus the chance to walk along the backbone of England to Hadrians Wall and then on to Scotland.

The Pennine Way starts in Edale in the Peak District and finishes just over the Scottish Border in Kirk Yetholm, passing through the South Pennines, Yorkshire Dales, Northumberland, Hadrians Wall and finally Scotland. The route is very well signposted and we shall be using the Stedman Pennine Way Guide, our Satmap Active 10 GPS plus the relevant mapping and compass.

Considering the length of the walk and the fact that we are taking 3 weeks to complete it, the planning has not been too onerous. We are taking our dog Fudge and due to accommodation availability, this has meant we have had to stay off route on a couple of occasions (Barnard Castle and Appleby) but we have made simple arrangements to get back on route quickly. We have also utilised other peoples experiences via blogs and websites plus accommodation guides which provides so much information, particularly route finding trouble spots.

Therefore, the majority of the accommodation is booked, deposits paid where required and with just a few loose ends to tidy up we have gone as far as we can - some 10 months before the walk starts.

We used Brigantes for The Dales Way in 2014 and have therefore used their services again for The Pennine Way.

Our itinerary is as follows: 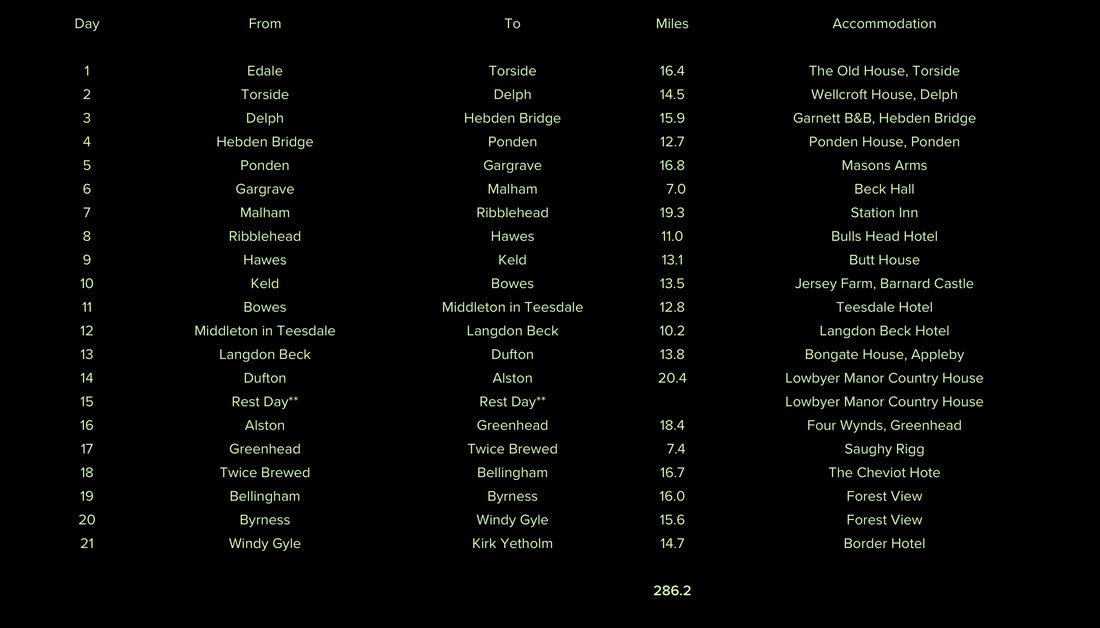 ​** Originally we were due to split the Alston to Greenhead leg up at Knarsdale but due to Fudge having to attend the Vets in Alston, we decided to have a rest day and join the 2 legs together, amending our route accordingly.

Read on to find out how we get on travelling up the spine of England into Scotland.

(Links to each individual day are below however just click on "Day 0" to start the story of the walk)
​The report of each days walk contains the relevant GPX file.  If the GPX file fails to download or presents itself as an XML file once downloaded then please feel free to contact me and I will send you the GPX file via e-mail.  ​​