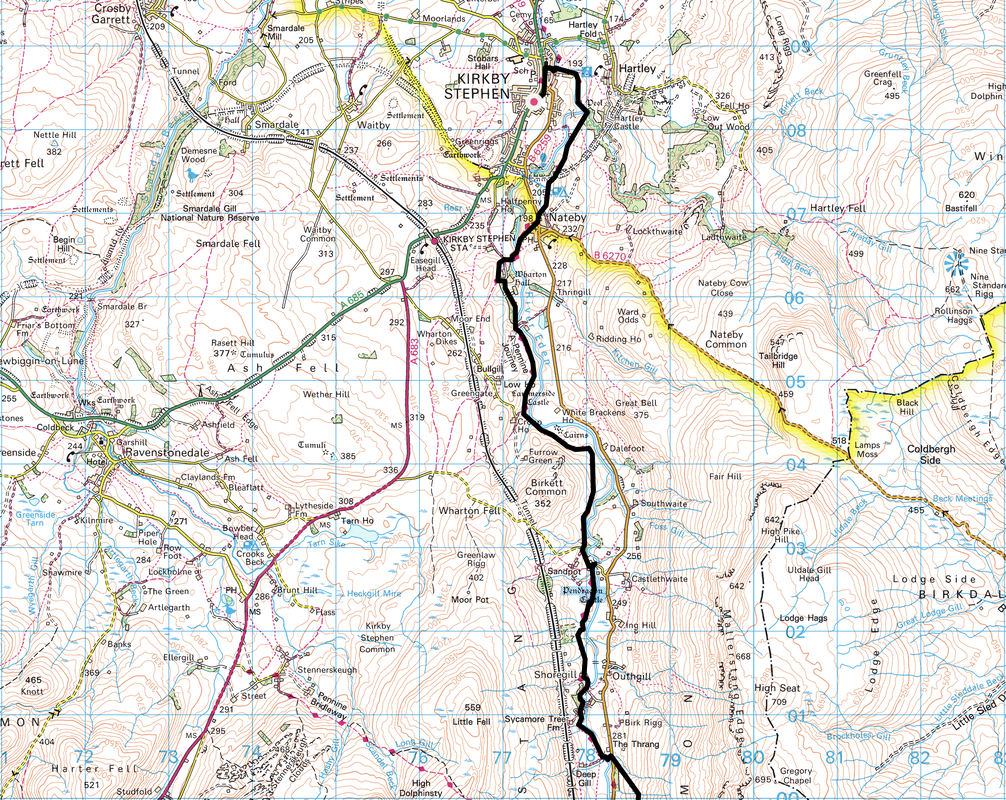 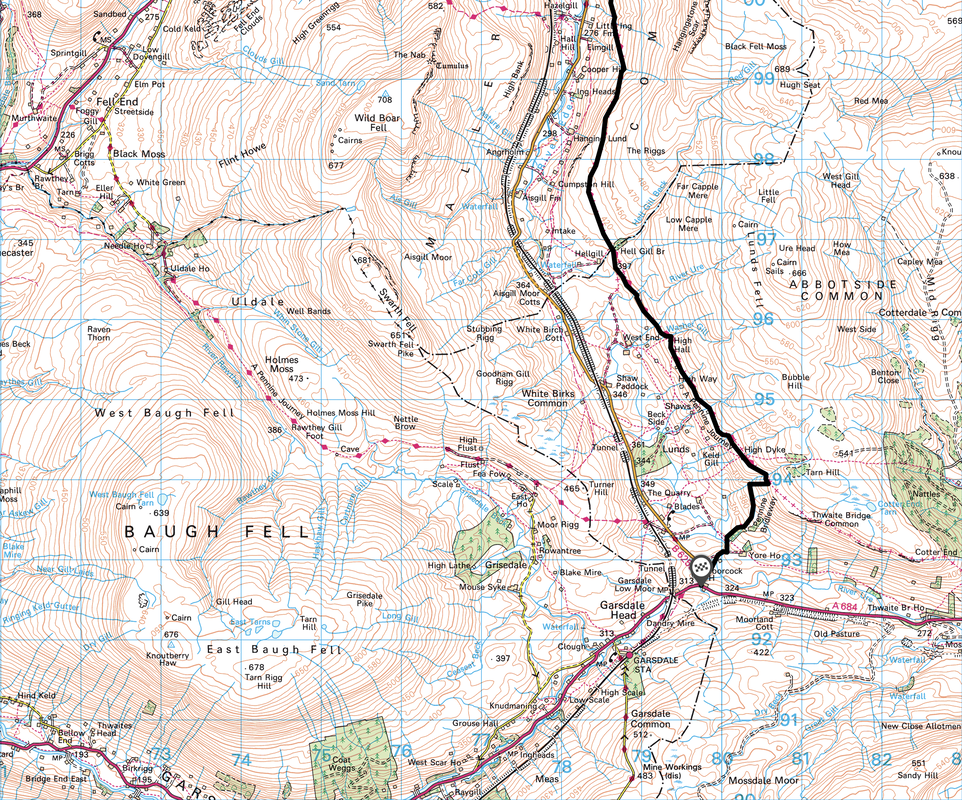 Big change in the weather today and it wasn't looking too clever either for the next couple of days. We awoke to a very overcast & humid day with the odd welcome breeze and it was to stay like that for most of the day. As usual our stay with Carol was run with the same superb precision we have become used to and she also did a load of washing for us which at £10 didn't come cheap but in order to avoid minging socks was money well spent believe me.

Breakfast was a noisy affair with lots of excitable Coast to Coast walkers conversing with their baggage provider. Before we set off out of the town we called in at the local bakers and bought a couple of our favourite Cranston’s Ham & Chicken Pies for our lunch today. We joined the procession of Coast to Coasters leaving the town via Frank's Bridge and as were turning off on our own route heard a shout from a few other walkers enquiring "Where are you going? It’s this way!". Putting them right as to the fact we would not be joining them today as we were on a totally different walk, we headed towards Nateby to the left of the River Eden.

We transited over farm tracks and pasture land following the River Eden for the most part. Stopped for lunch in the Mallerstang valley, north of Shoregill. At Thrang Bridge we joined up with the stony track of the Pennine Bridleway and it was here we felt the first drops of rain. Reaching the impressive Eden Water Cut the drops turned to light showers and stayed with us all the way along the lovely flat stretch of terrain via Hell Bridge. Just after High Dyke we left the Pennine Bridleway to drop down to Garsdale Head and our bed for the night, The Moorcock Inn which is literally in the middle of nowhere.

A really nice welcome at the pub where we warmed up with Scones, Tea Cakes & Tea before checking in. Pleasant evening meal but not for a couple of fellow diners who were sat next to the outside wall and were surprised to find it running with water - we think somebody left a tap running upstairs in one of the rooms - thankfully it wasn't us!

No wi-fi therefore we had a quick look at the weather forecast on the TV and this indicated that it wasn't looking too good for tomorrow with quite a fair bit of rain forecast. Due to the fact we had a long day tomorrow and would be walking over lots of boggy areas meant we had a discussion as to what our options were. We would see tomorrow and make a decision then. 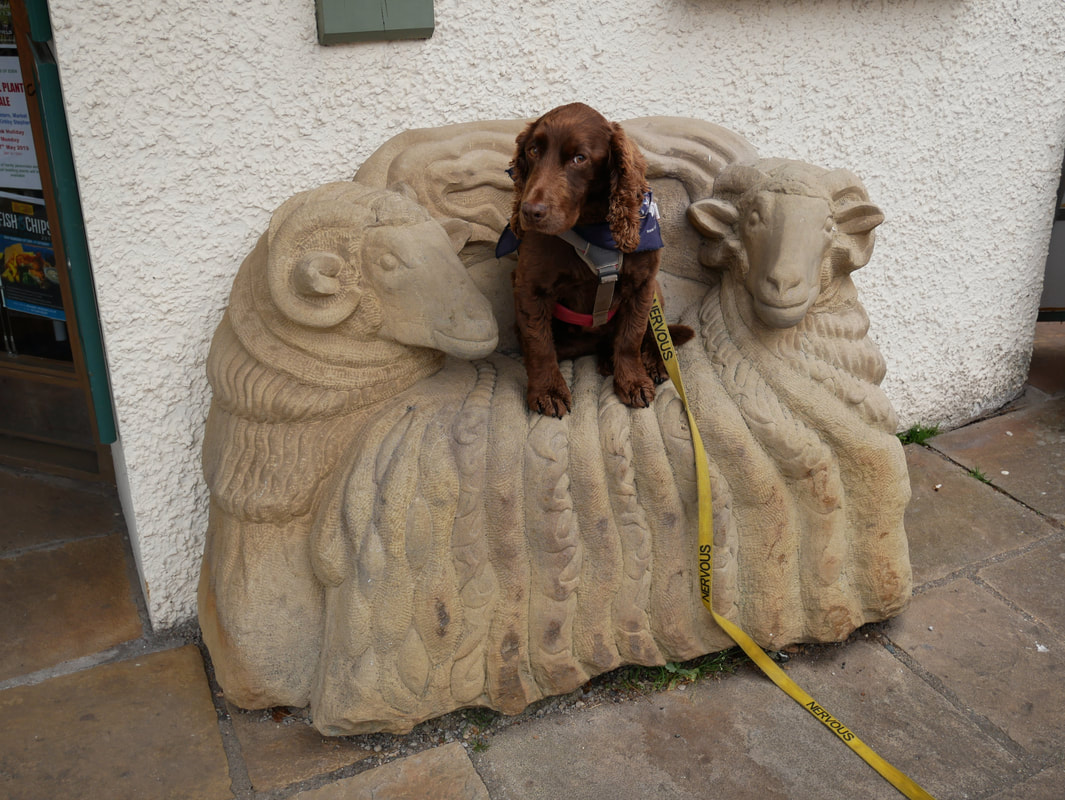 Fudge eyes me suspiciously whilst his Mum gets the pies in 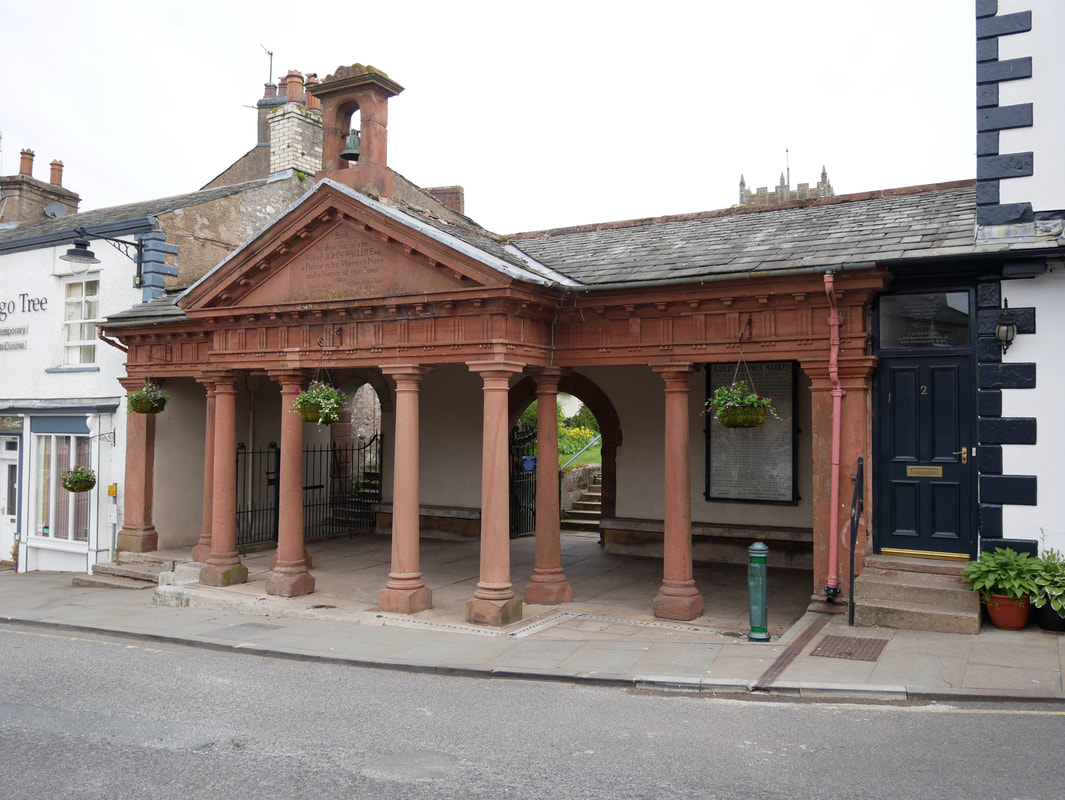 The Church is known locally as the Cathedral of the Dales and is built on the site on an old Saxon church and contains many ancient relics. At the west end of the Church, among several other ancient remnants, is the ‘Loki Stone’ – a block of stone about a metre in height, decorated by a carved figure with horns. This is historically important, as one of the few physical survivals from the time when the Vikings settled parts of this area. The entrance to the church is from the Market Square through the handsome Cloisters, which were built in 1810 with money left to the town by a former inhabitant – John Waller. 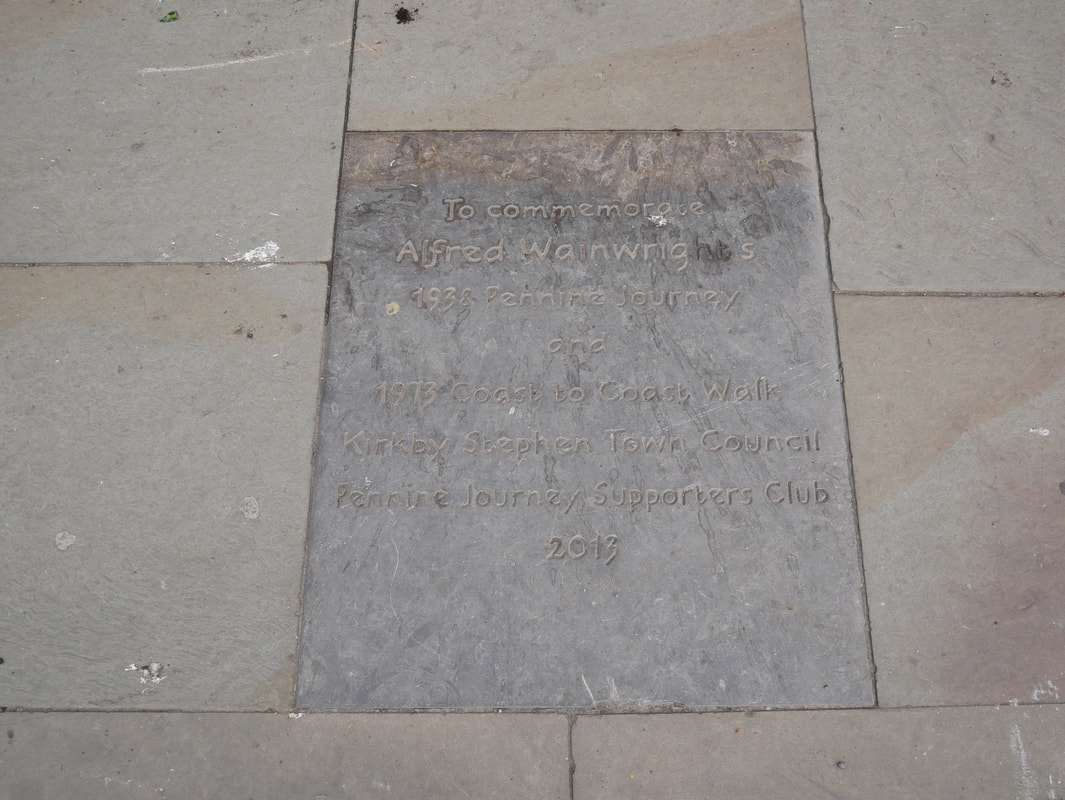 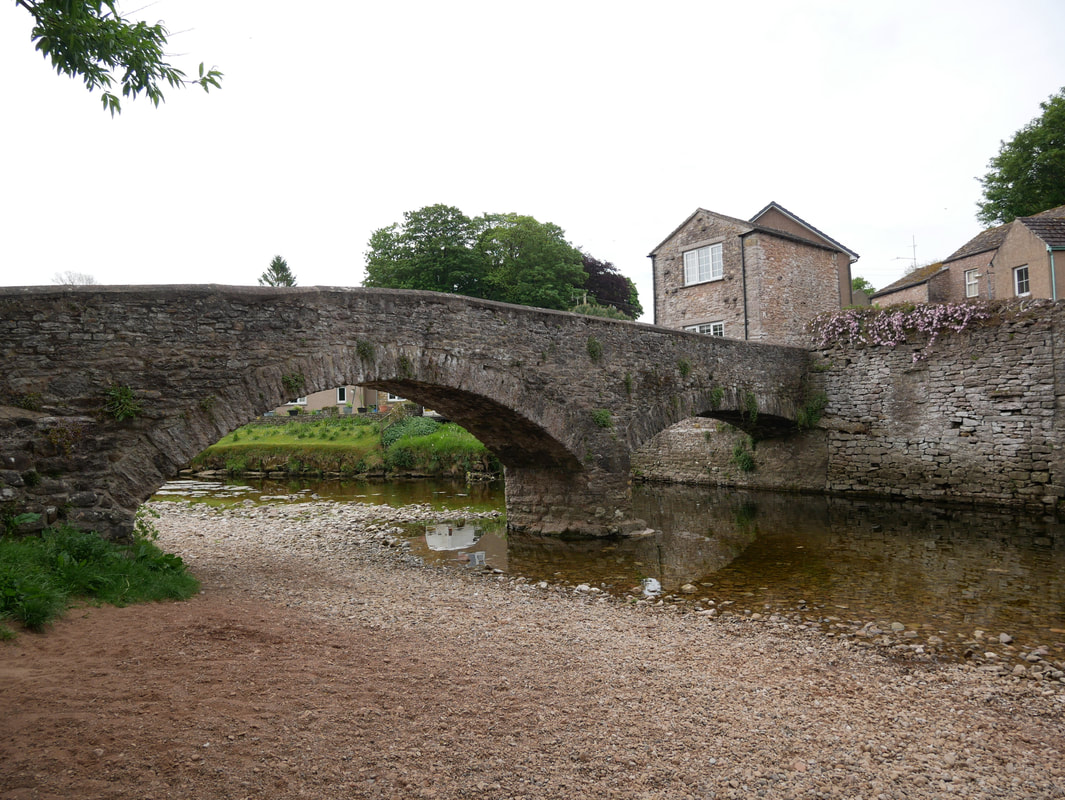 Frank's Bridge is Grade 2 listed pedestrian stone footbridge over the River Eden. It was built in the 17th century as a 'corpse lane' bridge - used to carry coffins from Hartley, Winton and other nearby villages for burial at St Stephen's church. There are stones at the end of the bridge where the coffins could be rested. The bridge is thought to be named after Francis Birbeck, a local brewer (the houses around Frank’s Bridge are converted brewery buildings). 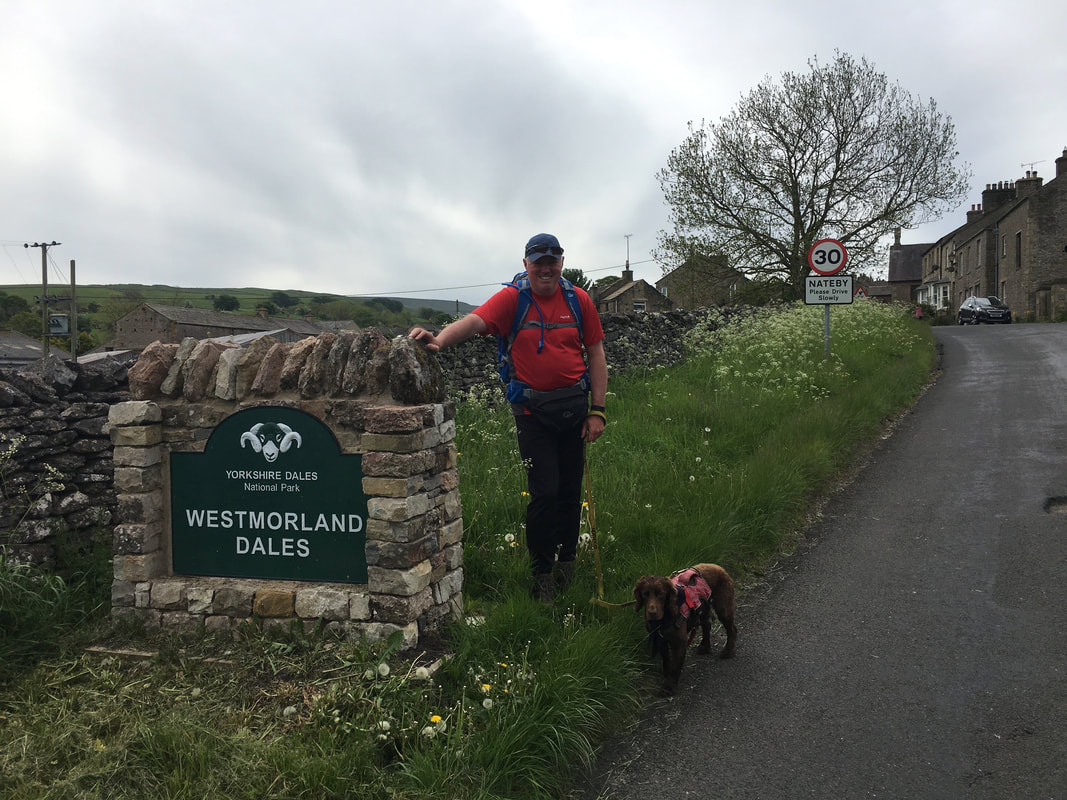 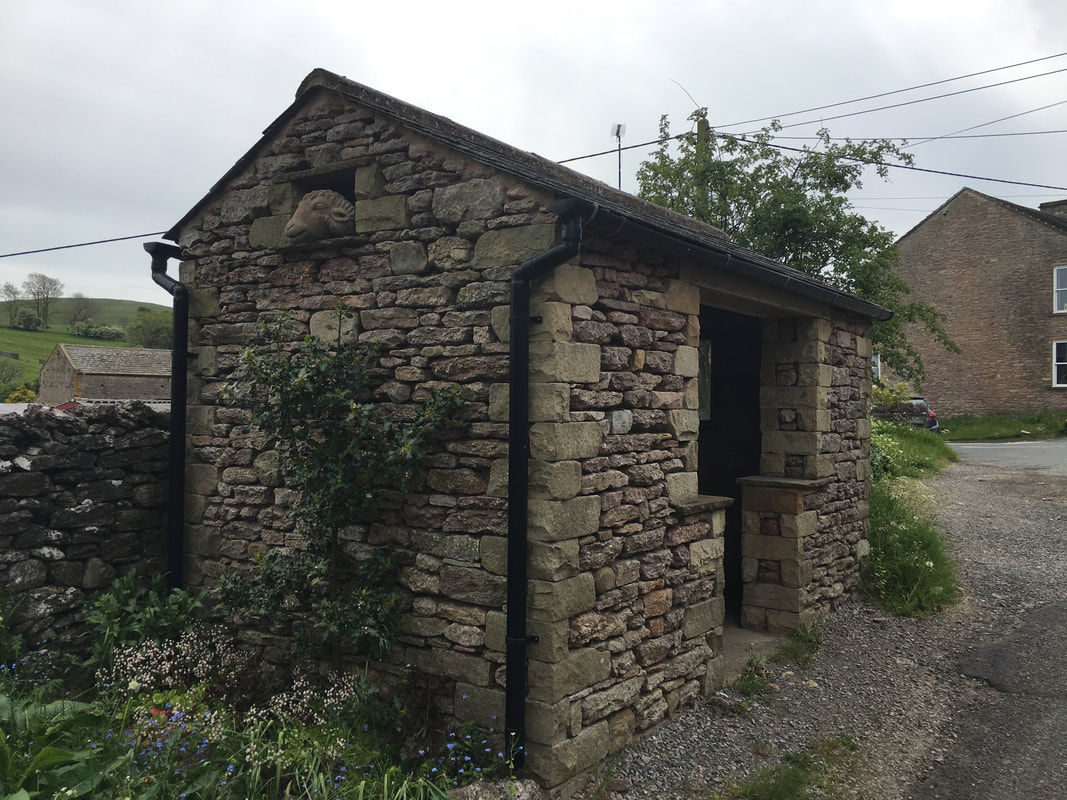 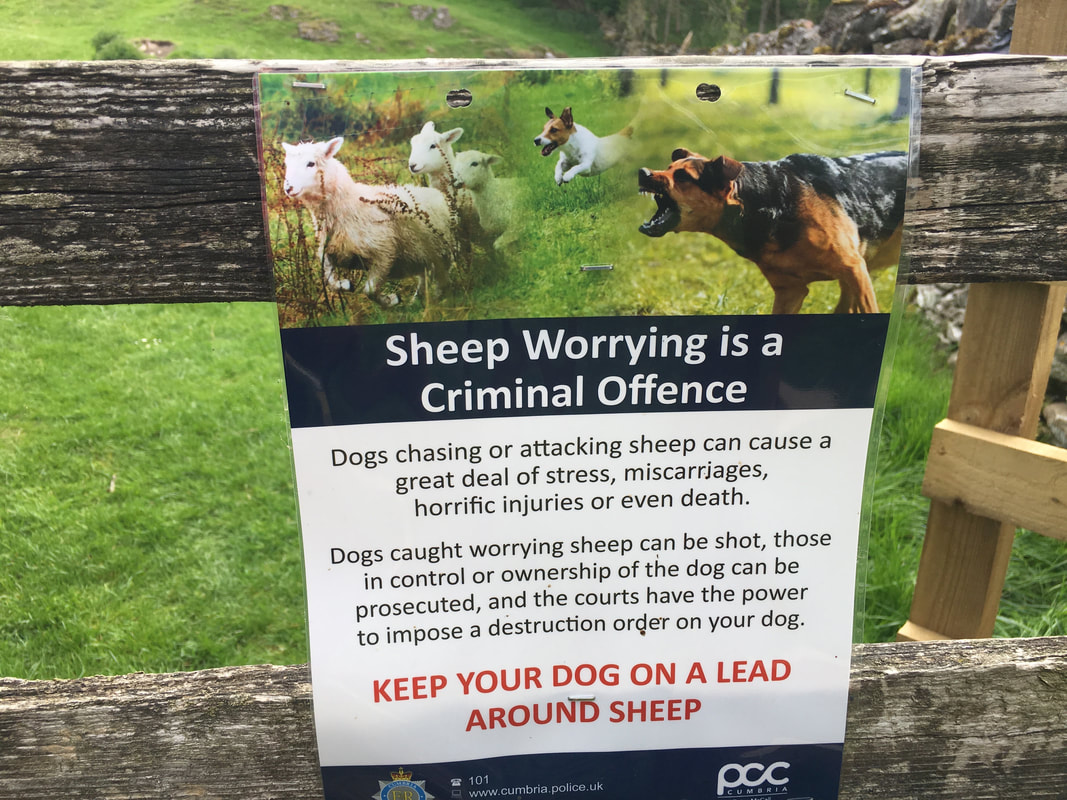 Isn't it sad when people think that having an uncontrolled dog around livestock is acceptable behaviour? 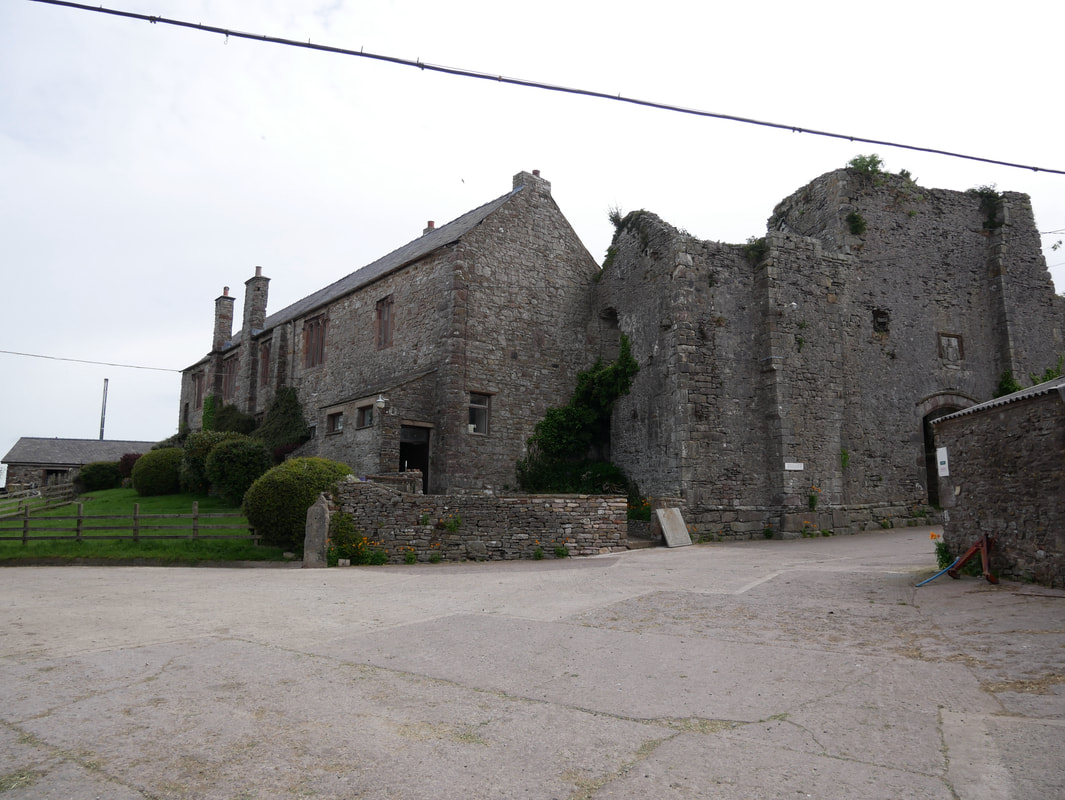 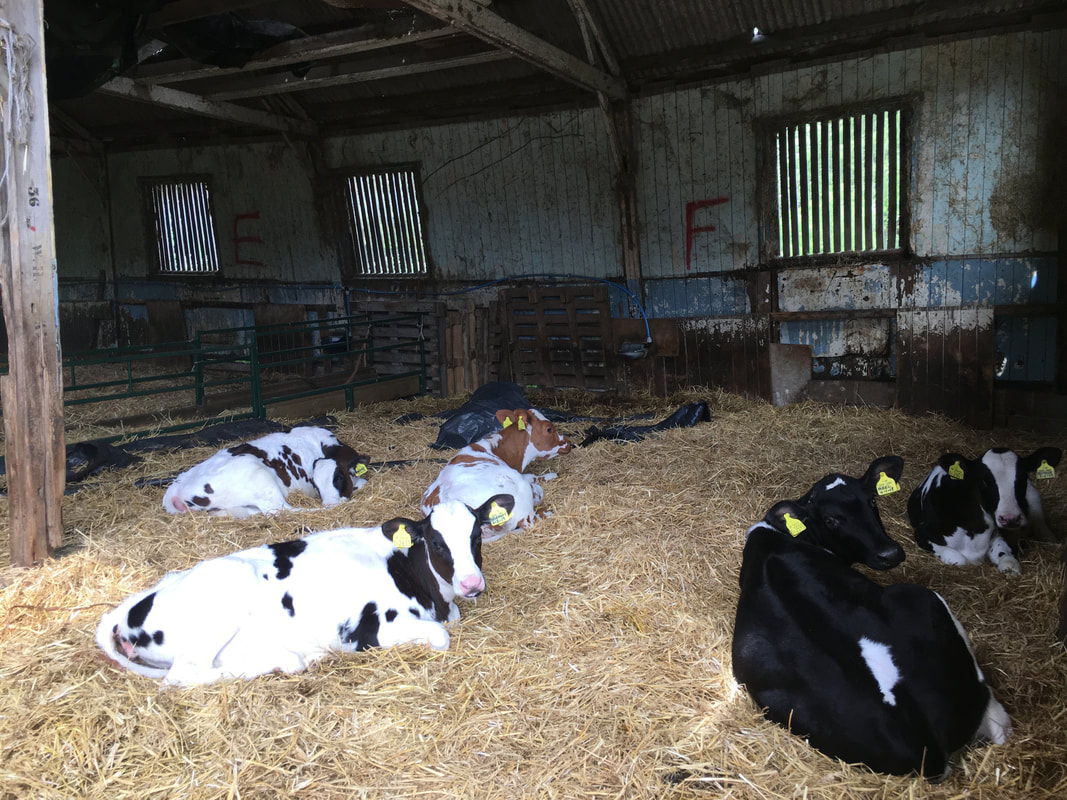 Yes? What do you want? 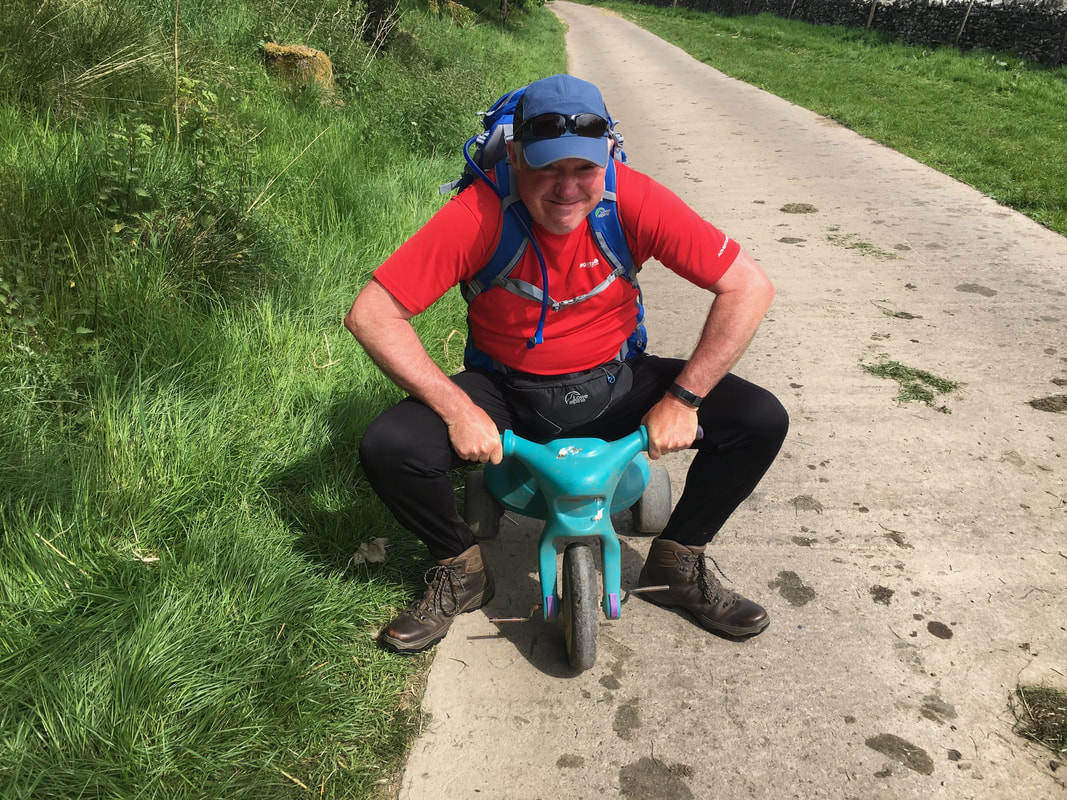 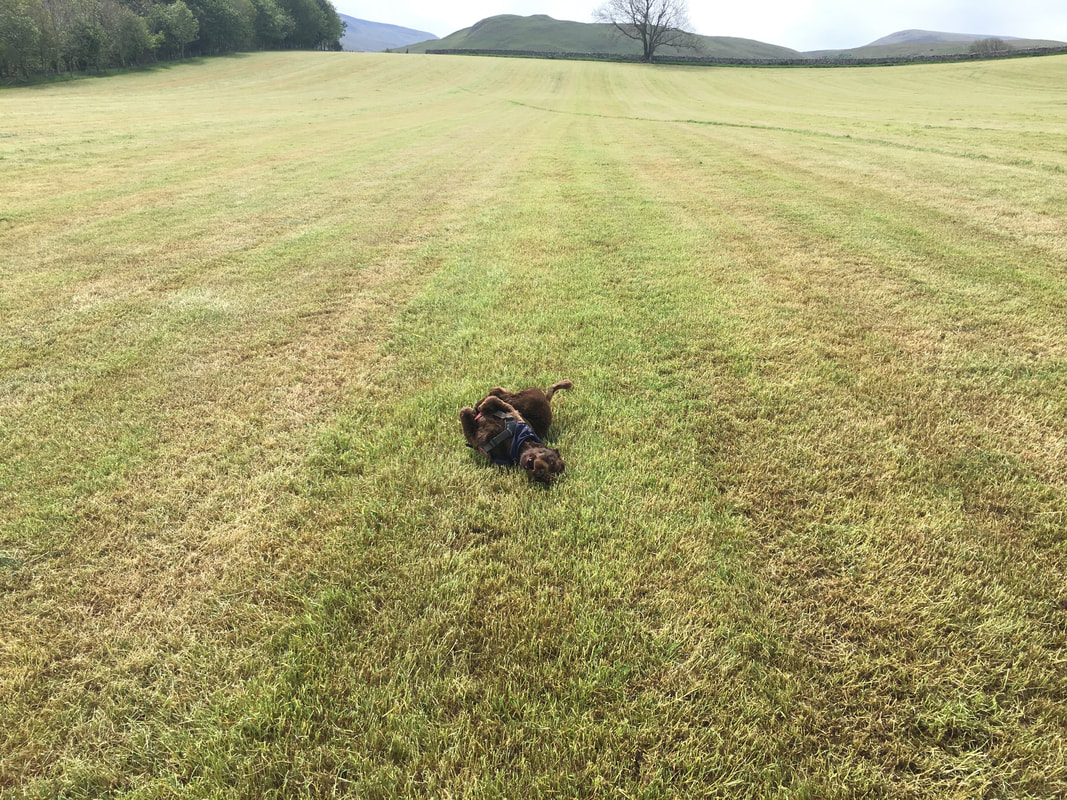 As you can see, Fudge absolutely loves this sort of terrain 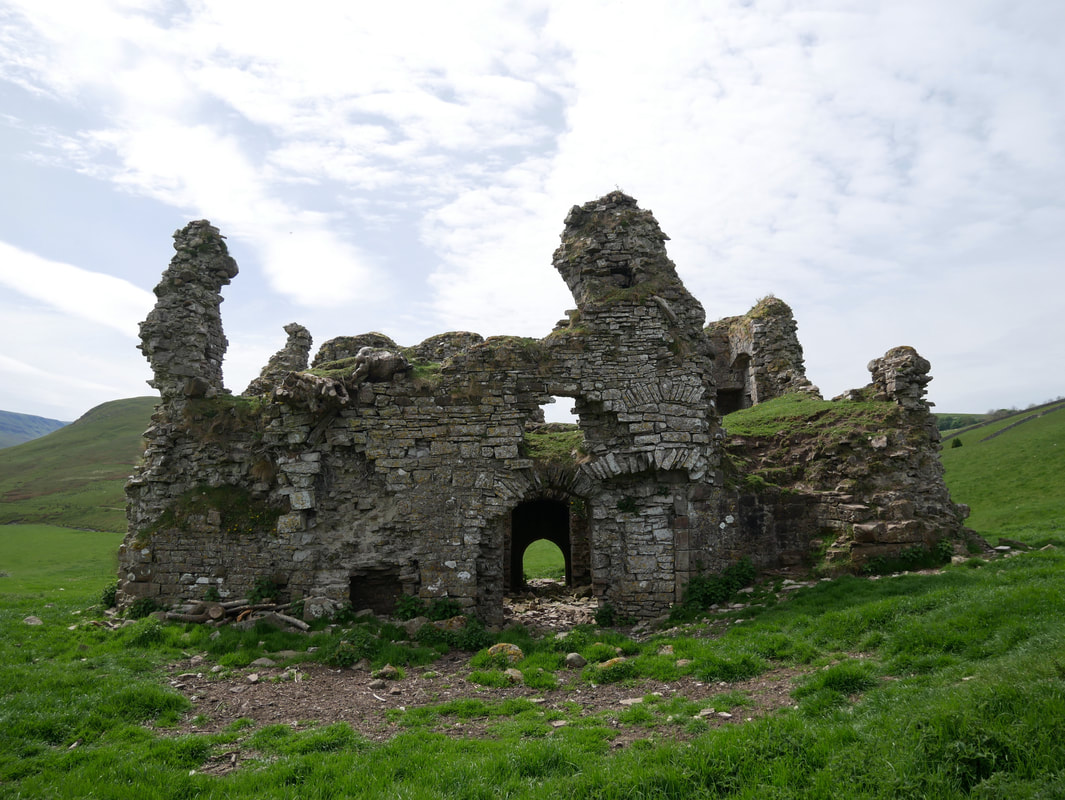 The ruins of the 12th Century Lammerside Castle 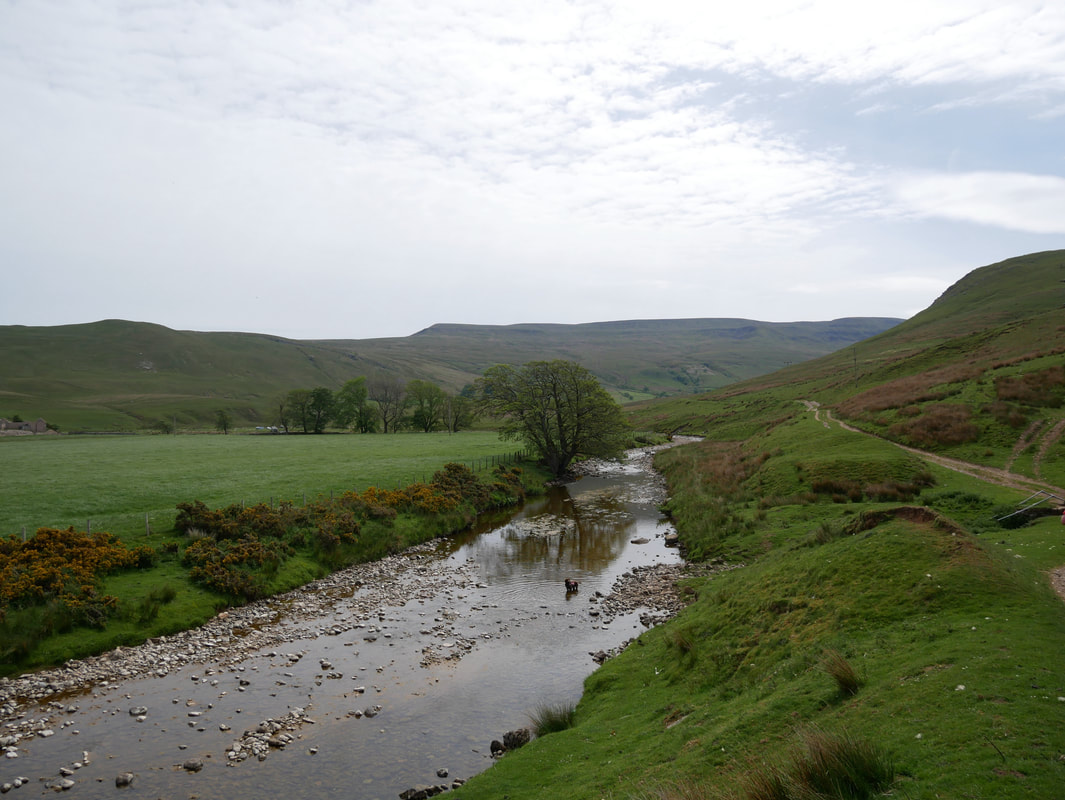 Walking above the River Eden with Mallerstang Edge behind 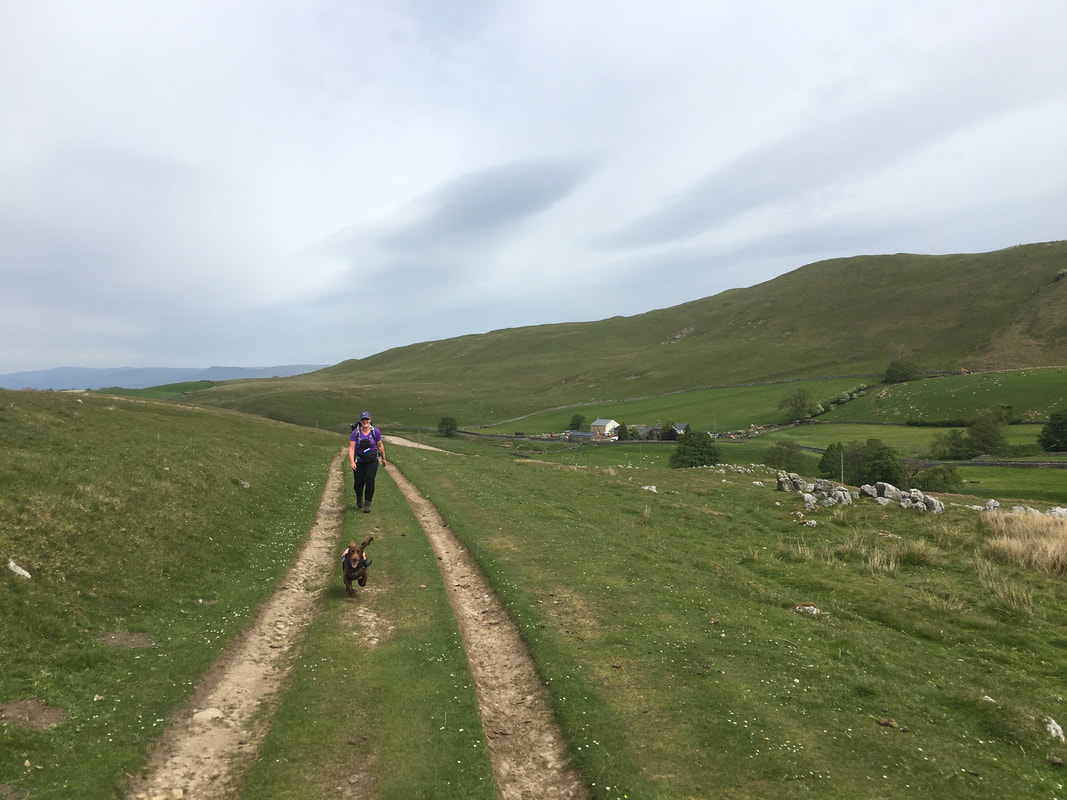 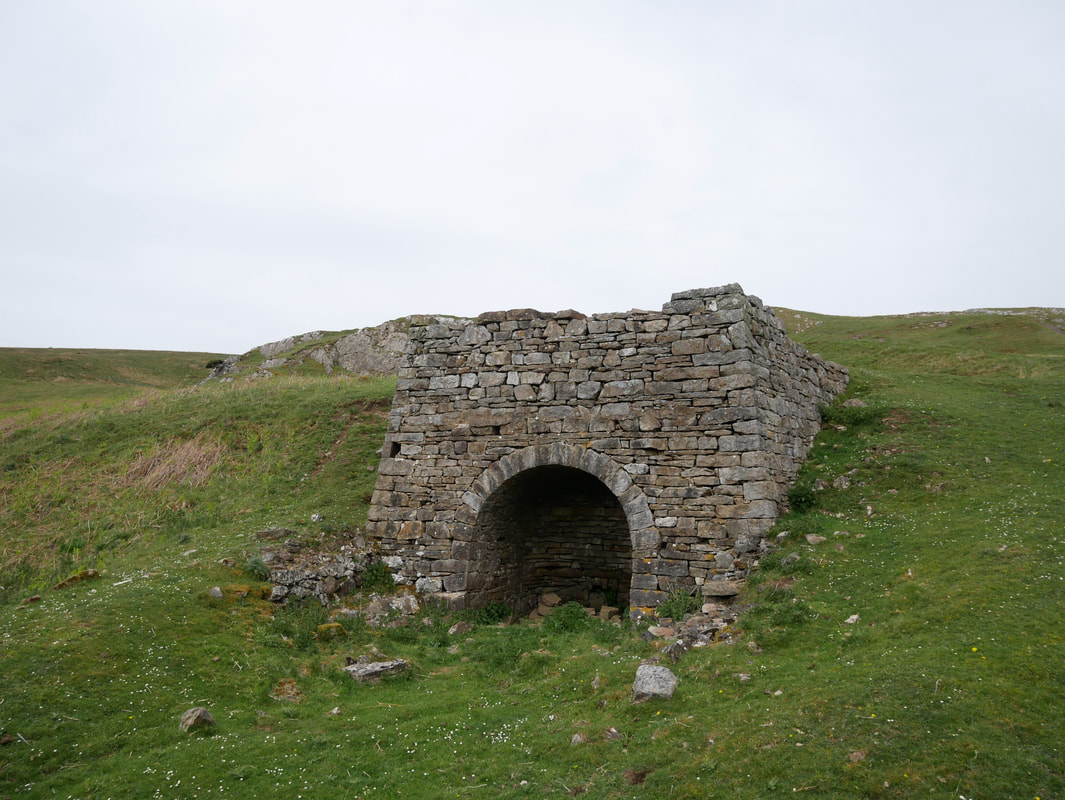 An old limekiln on the edge of Birkett Common 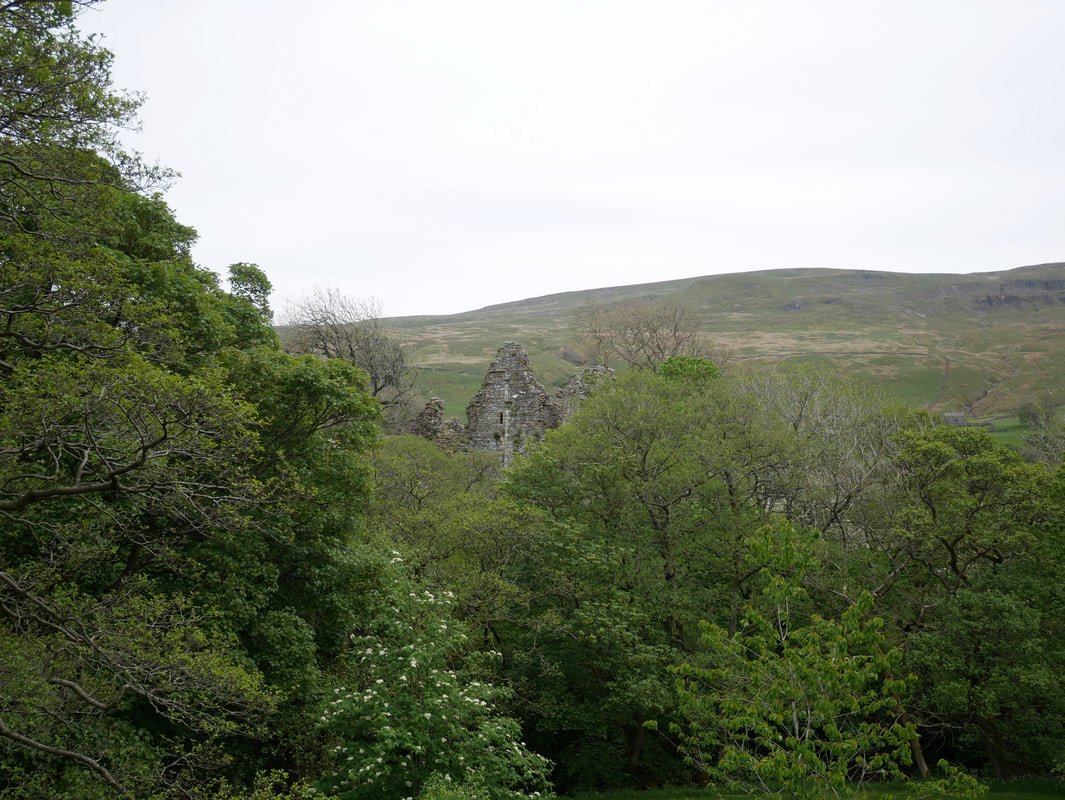 The ruins of Pendragon Castle - according to legend the castle was built by Uther Pendragon, the father of King Arthur 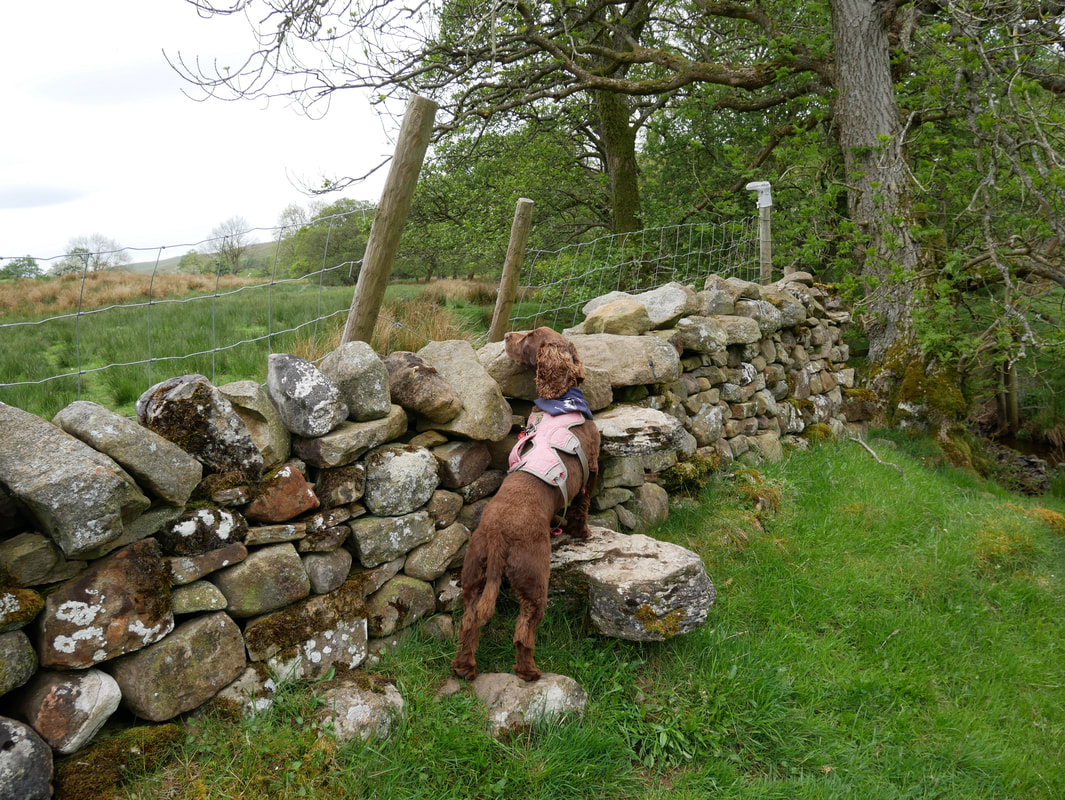 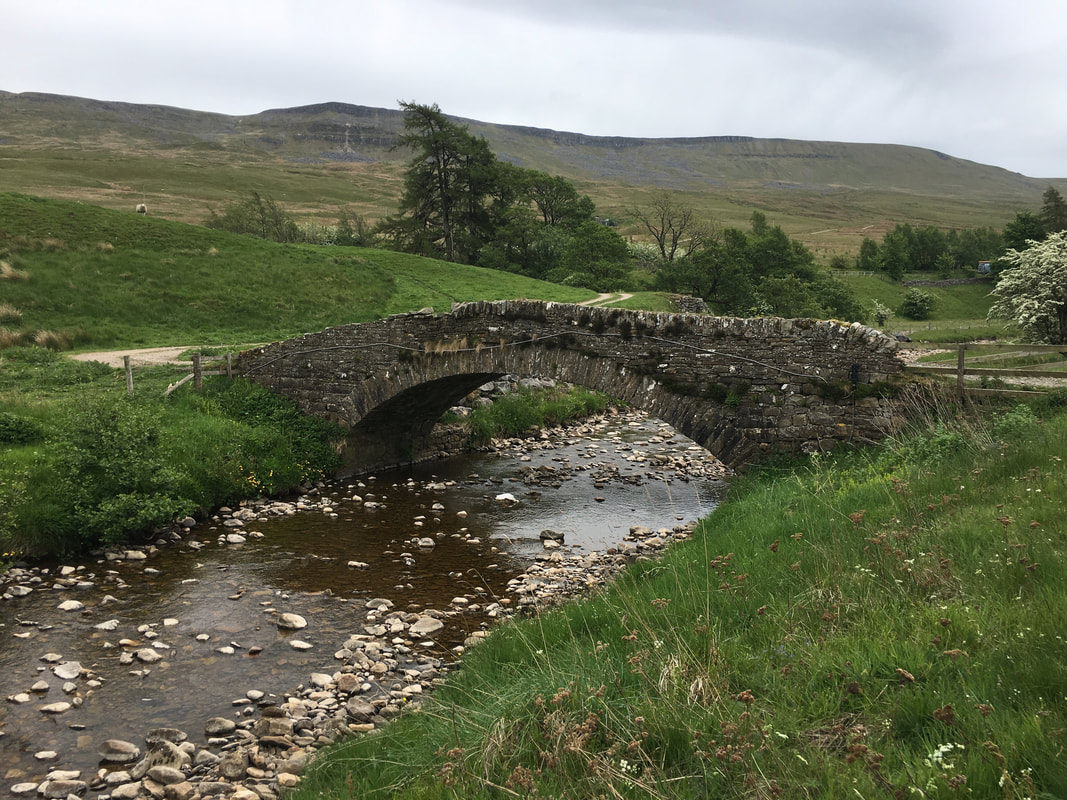 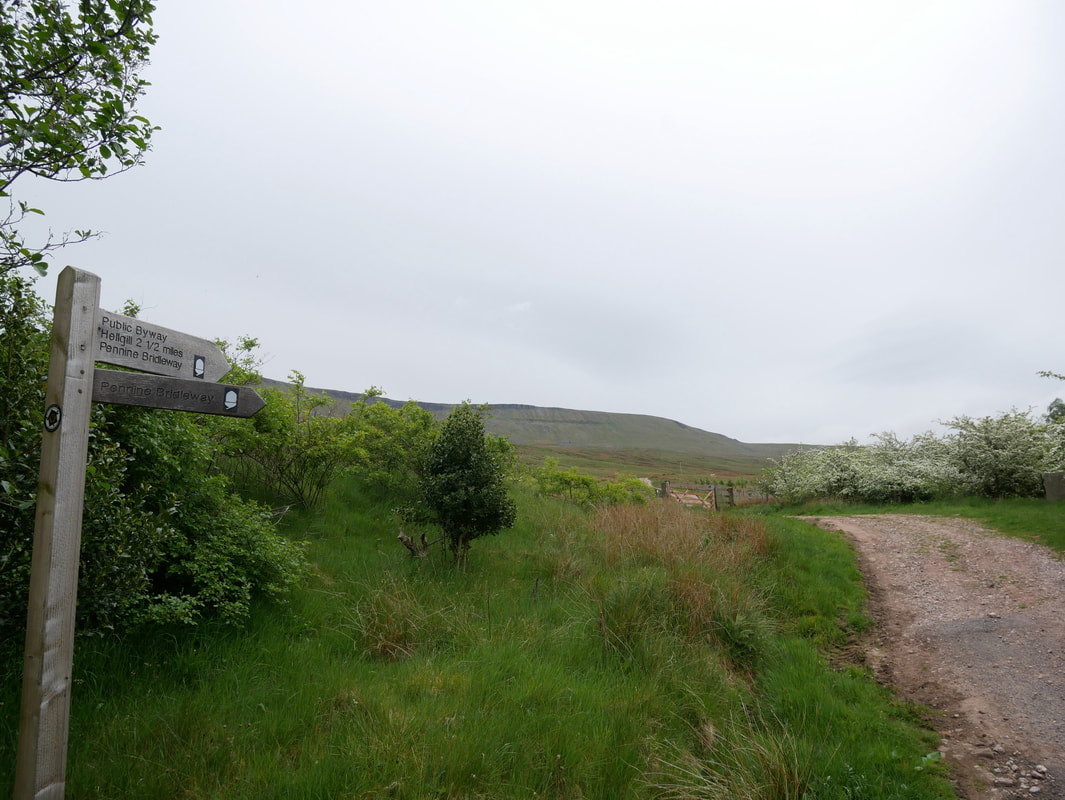 From above Thrang Bridge the route heads to Hell Gill some 2 and a half miles distant. 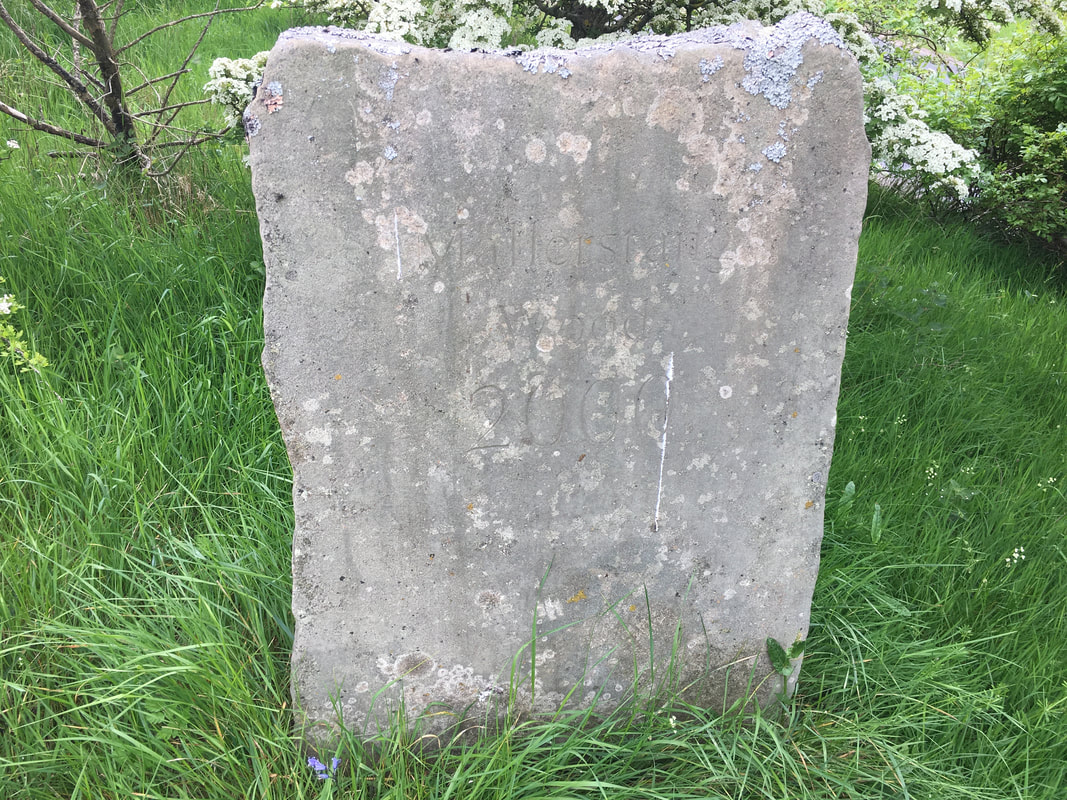 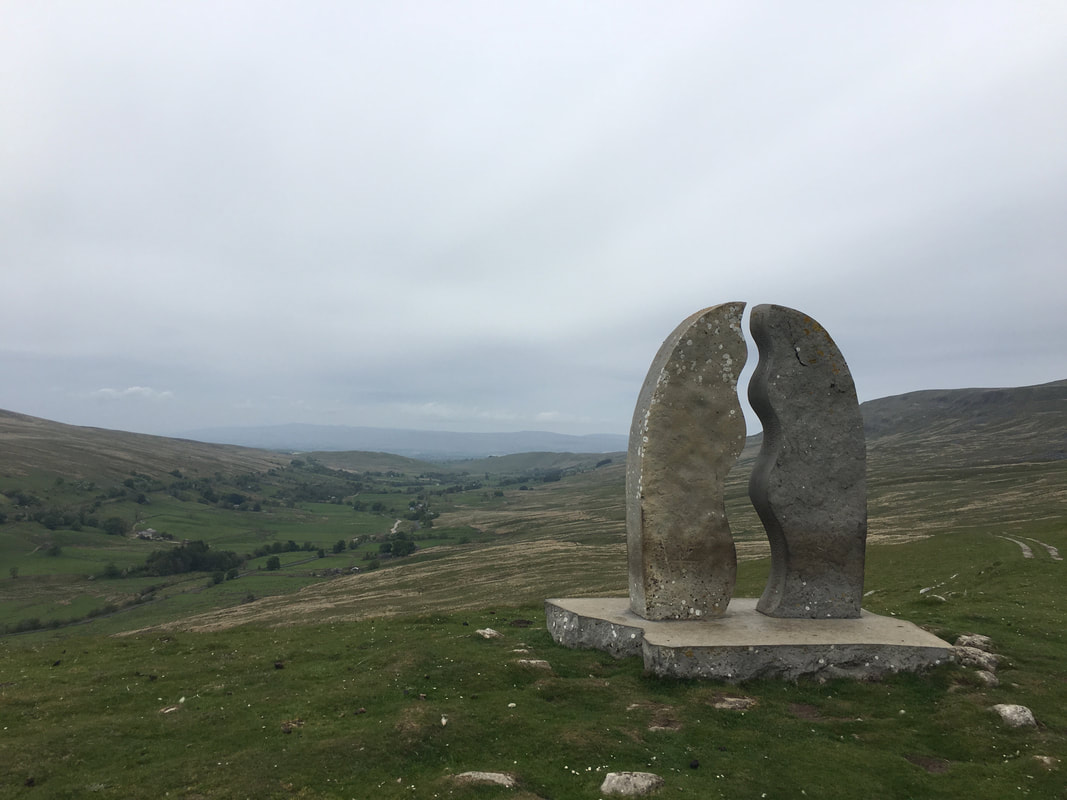 "The Water Cut" by Mary Bourne

"Water Cut" is one of ten sculptures called Eden Benchmarks, commissioned by East Cumbria Countryside Project and situated at various locations along the entire length of the River Eden. Made from Salterwath limestone, like a huge split milestone, it is dramatically expressive of the river’s powerful historic journey through the landscape. It also provides a suitably majestic throne on which to rest and admire the magnificent view. The sculpture stands 2.2m tall and was made in 1996. 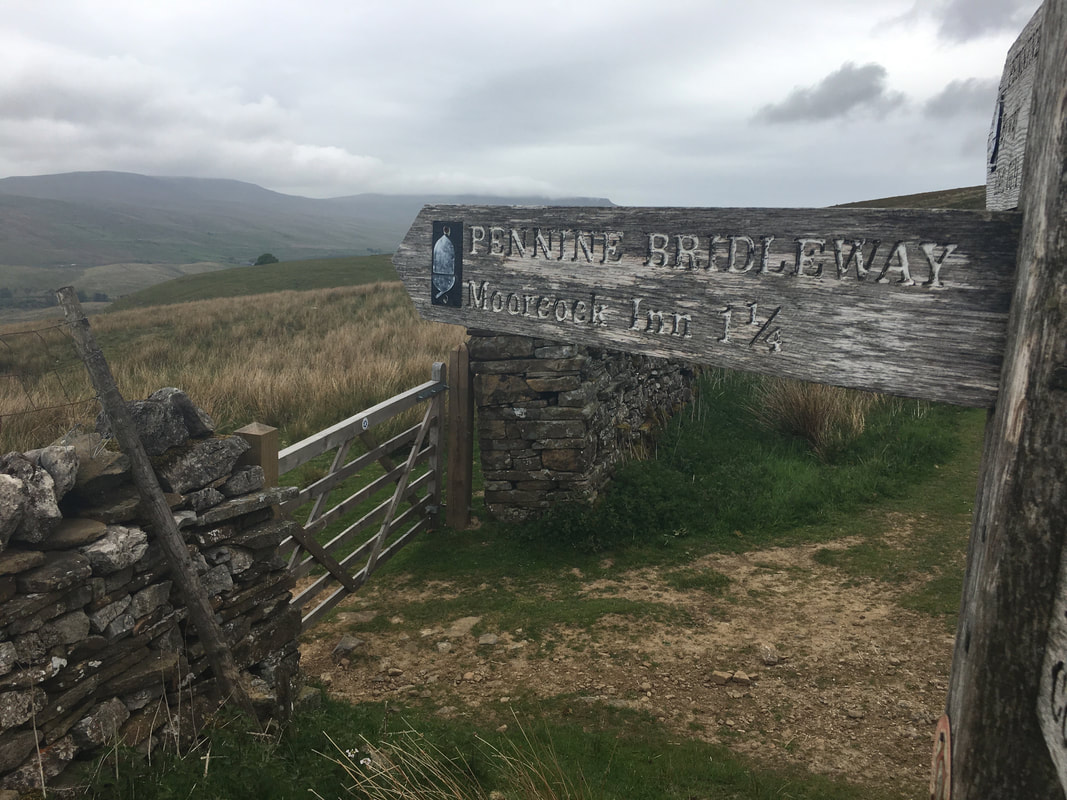 After a fantastic transit from Thrang Bridge high along the escarpment it was now time to drop down to The Moorcock Inn via The Pennine Bridleway. 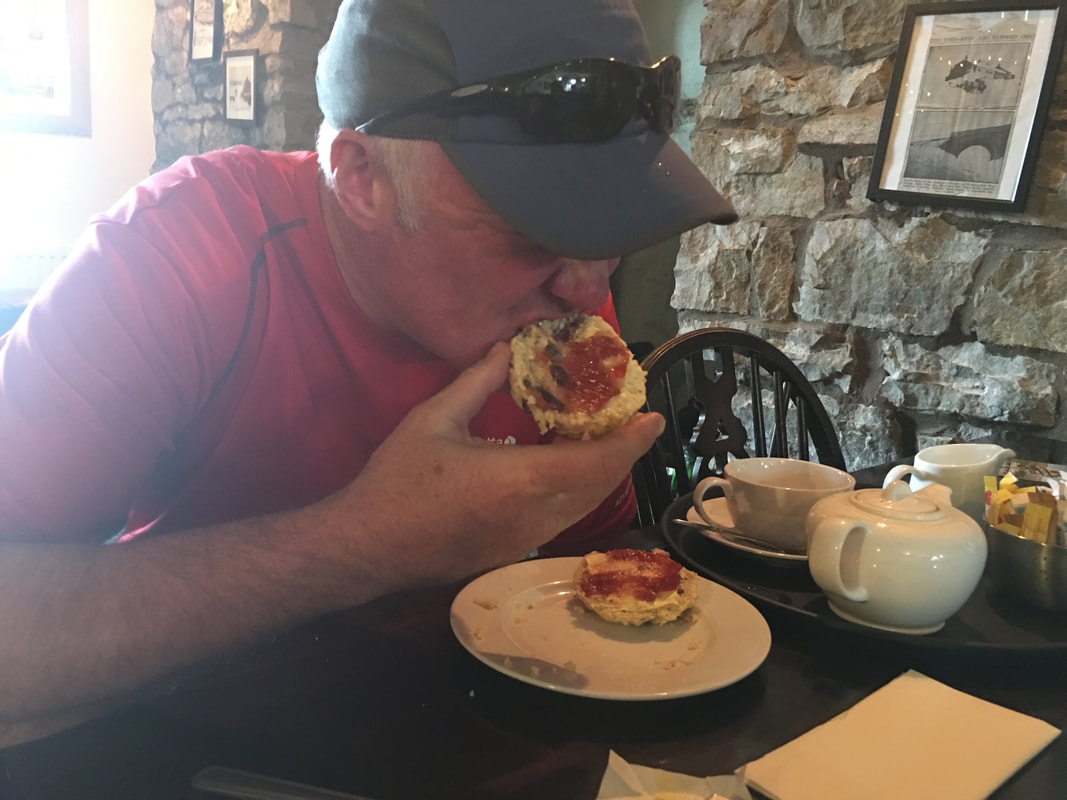 Tea & Scones in The Moorcock Inn - looks like I haven't eaten for a week. Watch yer knuckles there Dave........ 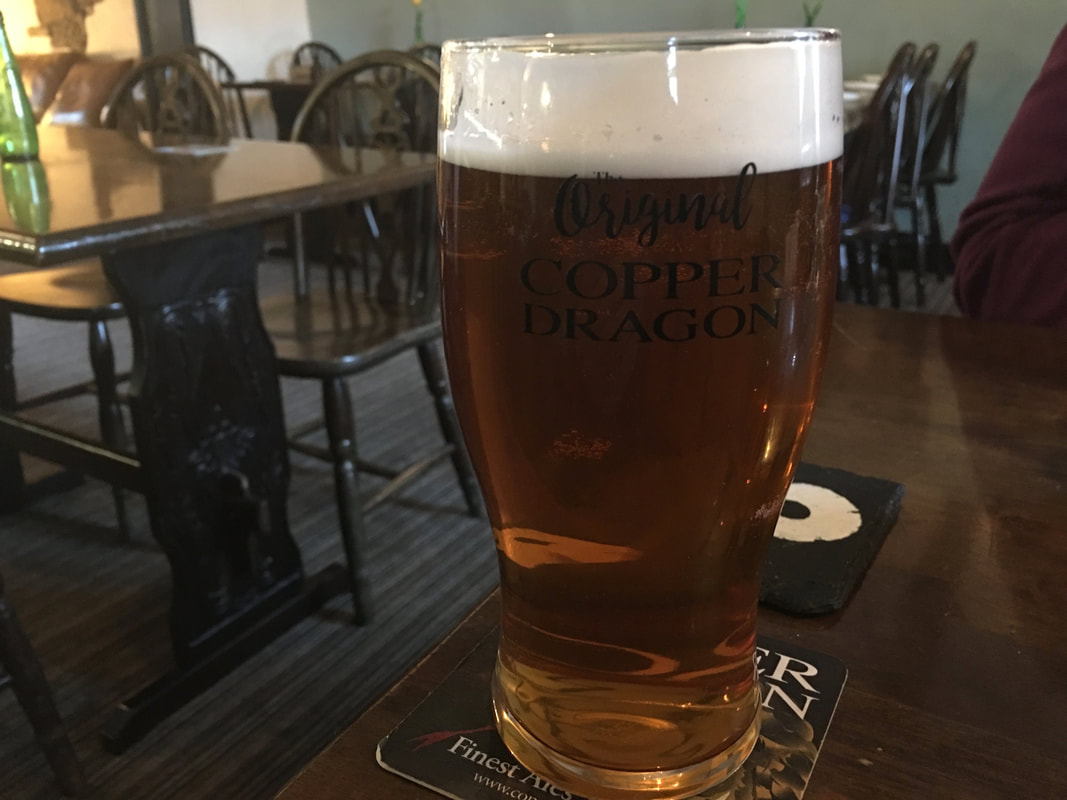 .......... closely followed by a nice pint of Copper Dragon which didn't touch the sides 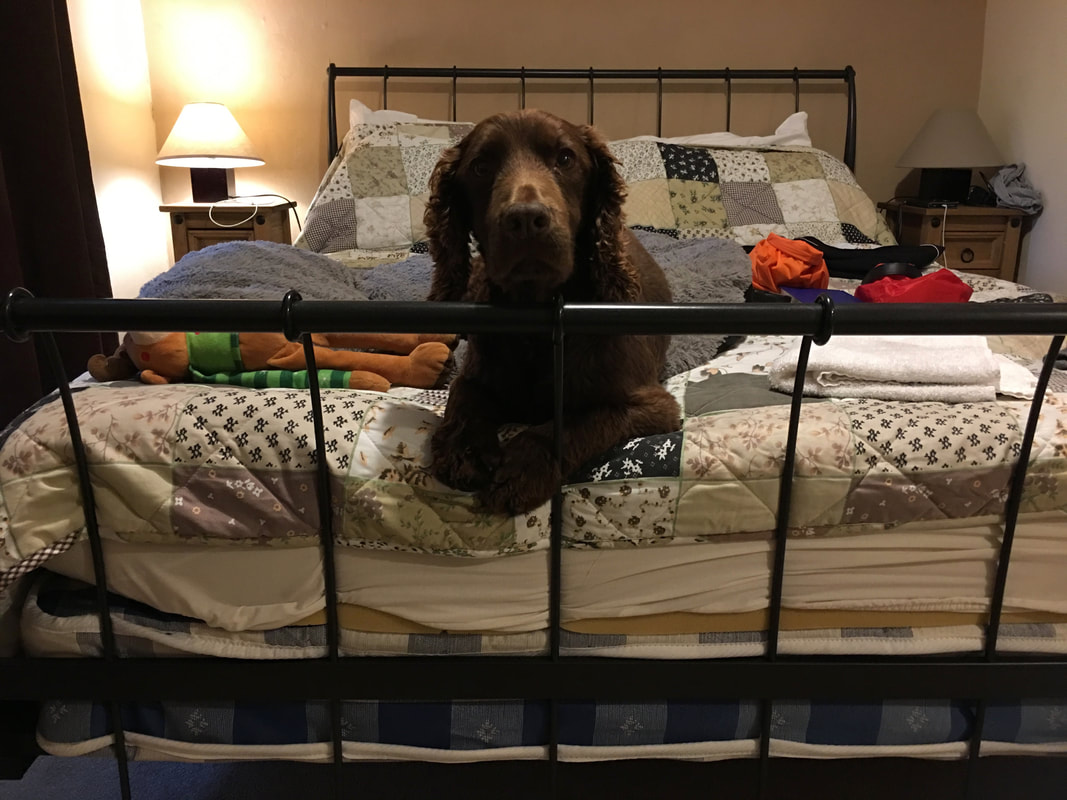 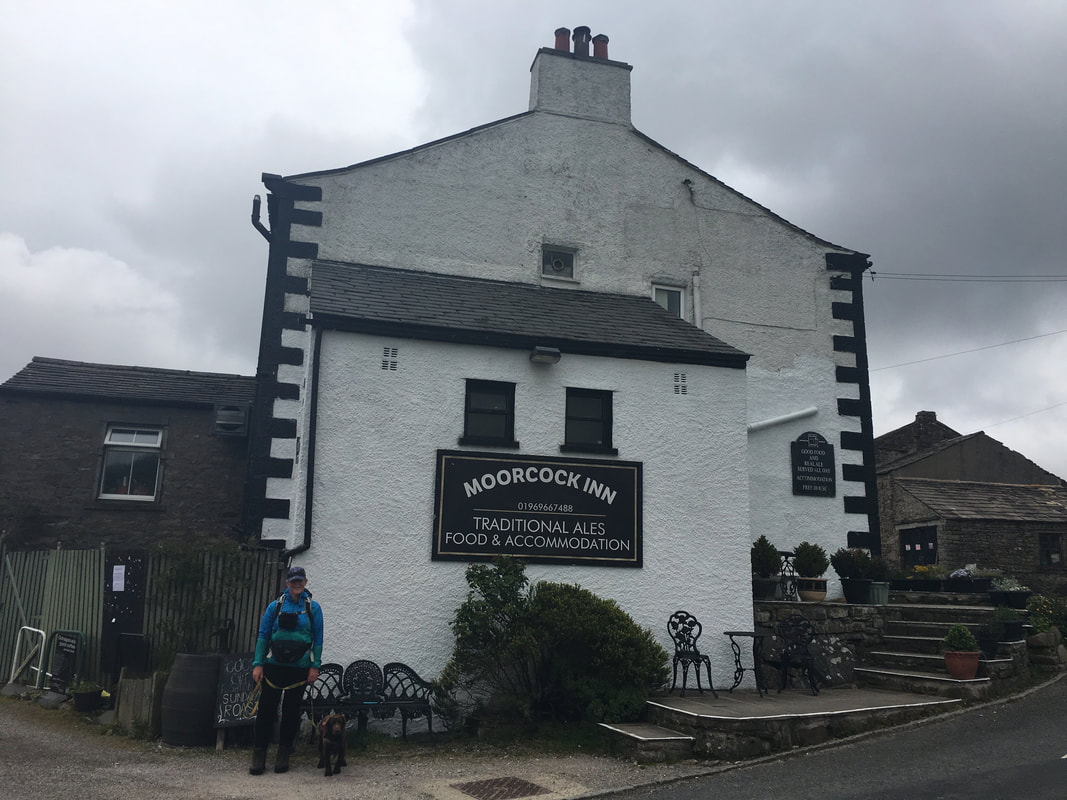