Another light rucksack day today for the almost 21 miles to Bridport where Angie was brought up and where her Mum still lives. Bank House is a very pleasant B&B and we enjoyed our stay - no frills, clean and in a fantastic location. The owners Bob & Lee are lovely people who gave us a super breakfast and Lee was hilarious as front of house. The weather today promised to be a mixed bag - one of those days when the forecaster just puts every symbol up on the chart because they do not really know.

As we were leaving Beer we saw a familiar face on the main street outside the shop. It was Penelope Keith who was filming "Hidden Villages". More erosion in evidence as we meandered along Seaton Hole Beach - Seaton itself was looking very tired. Just after Seaton Golf Course there began a dark, leafy and undulating path for 5 miles to Lyme Regis through the Undercliff - this was a dull, humid and seemingly endless trudge through woodland with no views and only one occasion where we had any real light. We finally popped out of the woods to see a welcome sight - The Cobb at Lyme Regis where we were hit by the masses. The village was absolutely mobbed and to be honest was quite overwhelming.

After a pricey lunch at The Ocean View we headed north out of the village for Charmouth - an area we knew had been plagued by diversions in the past. Stonebarrow Lane out of Charmouth was extremely long and excruciatingly steep and it was just a question of head down and getting on with it. As we neared Golden Cap the weather improved from overcast and humid to sunny with a light breeze. From the top of the Cap we dropped down into Seatown and a very pleasant stop at one of our favourite pubs, The Anchor. Really stunning early evening walk over the hills to West Bay with a final half mile through fields to Angie's Mums in Bridport. Ten and a half hours in the saddle today but we had the consolation of a late start plus a short day tomorrow.​ 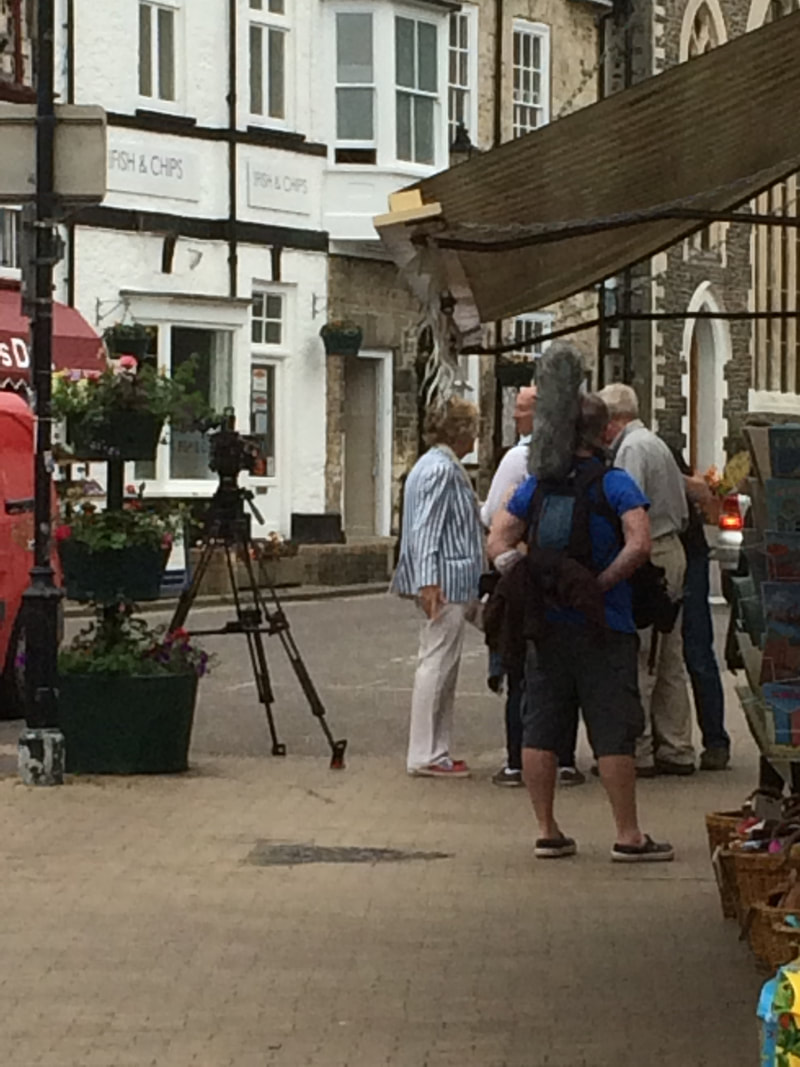 Hobnobbing with Penelope Keith in Beer 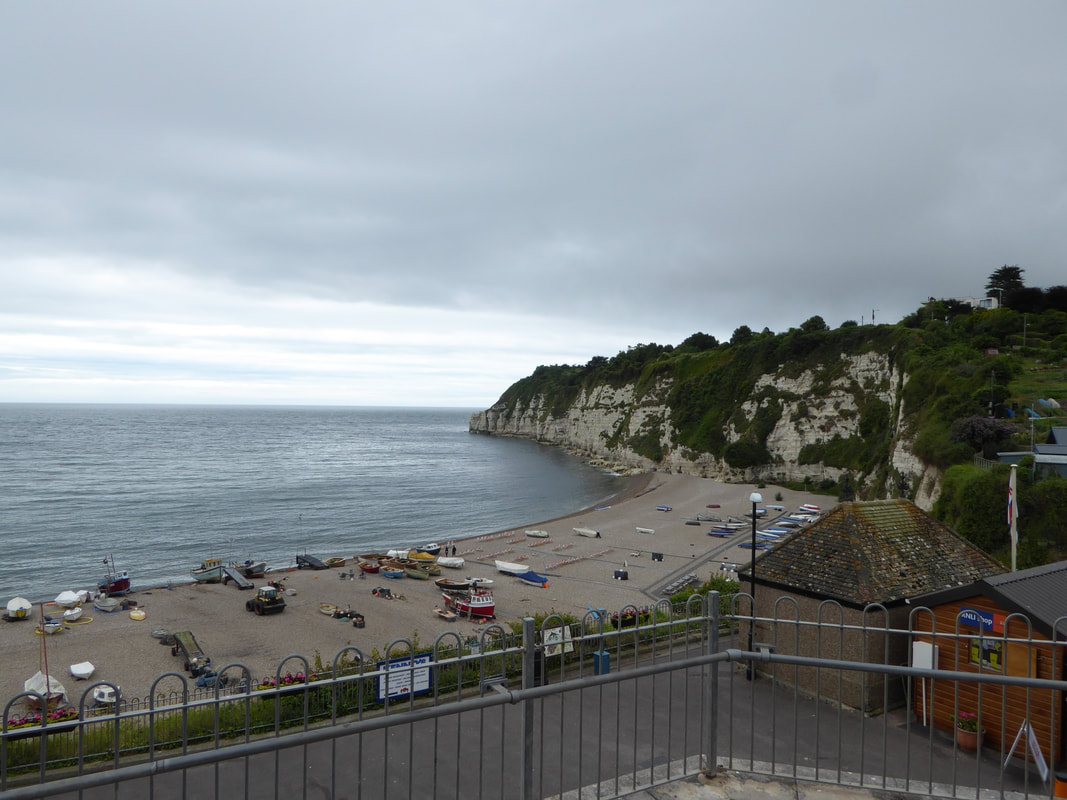 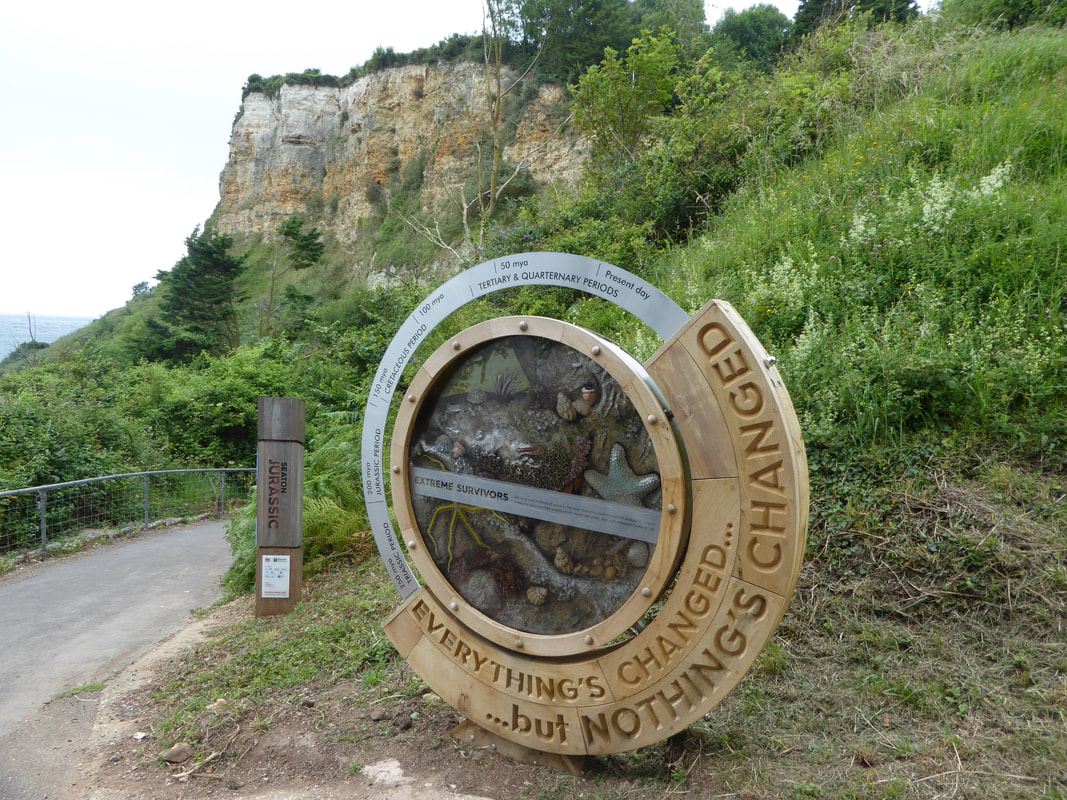 Lots of information about the Jurassic Coast along this stretch 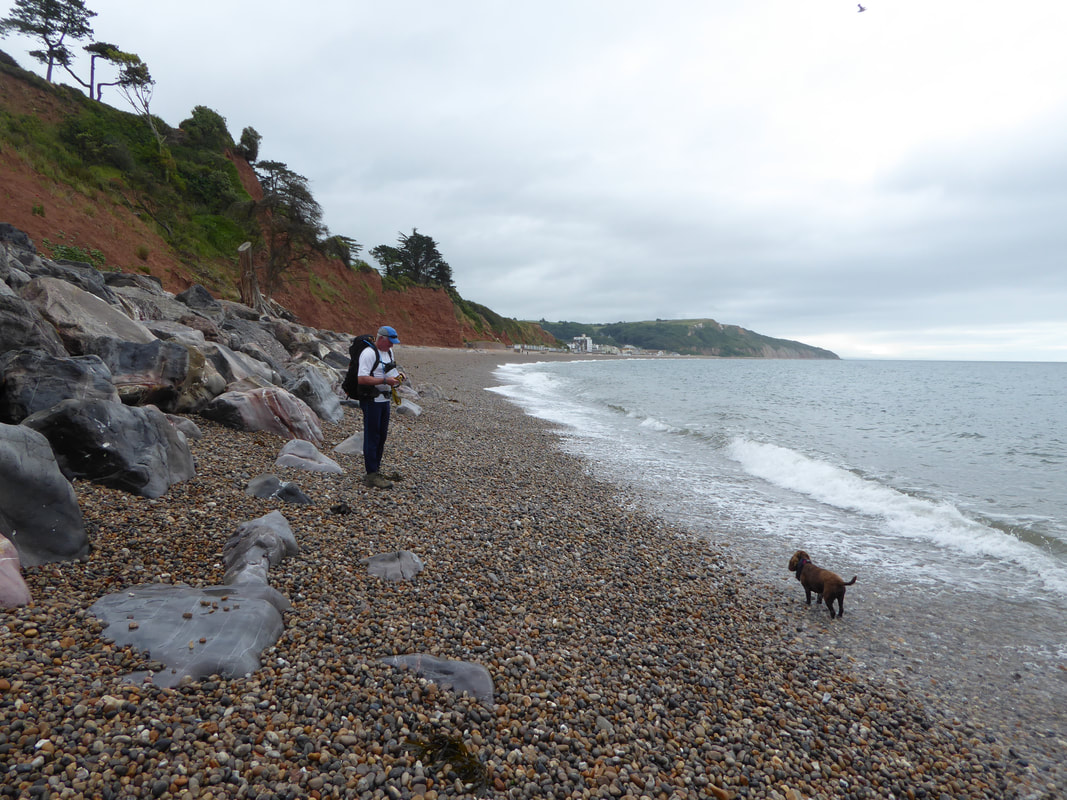 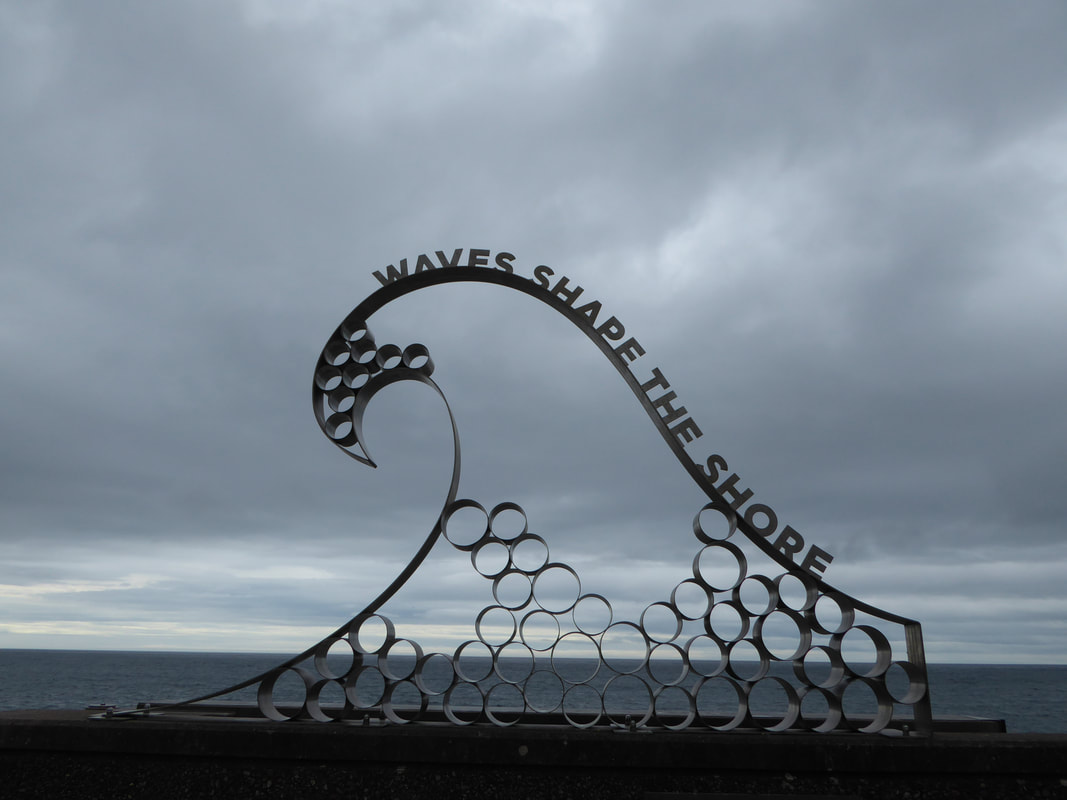 The "Waves Shape the Shore" sculpture at Seaton Beach 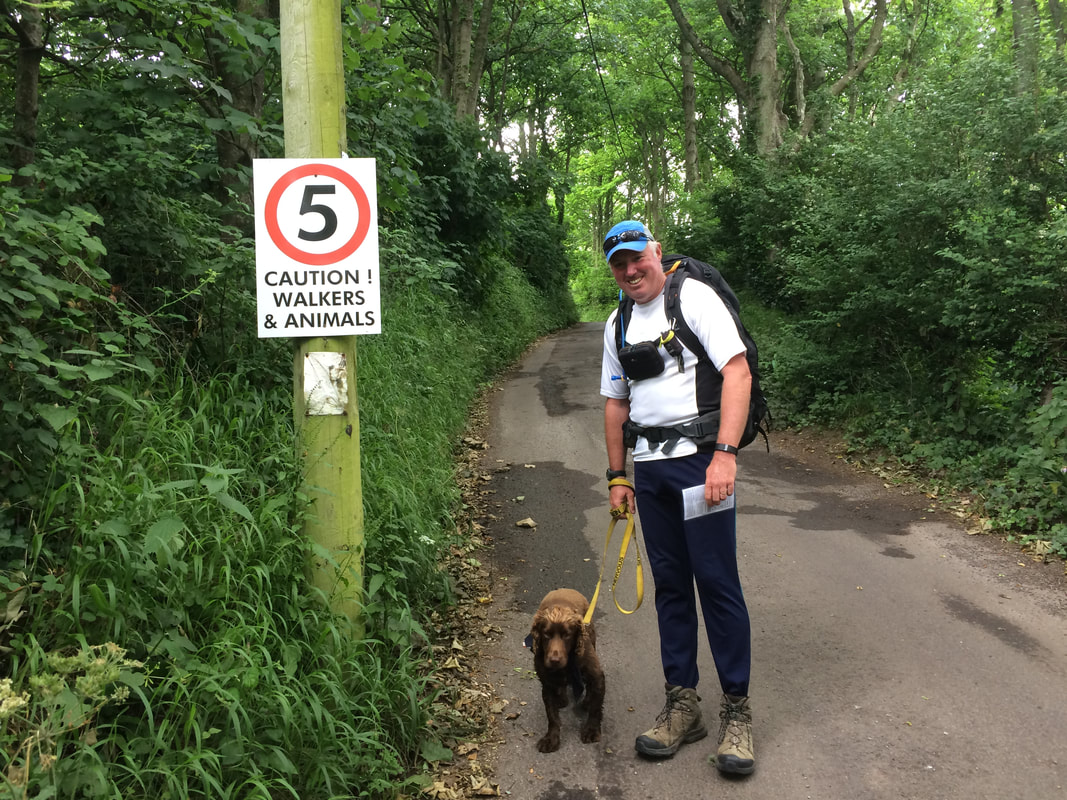 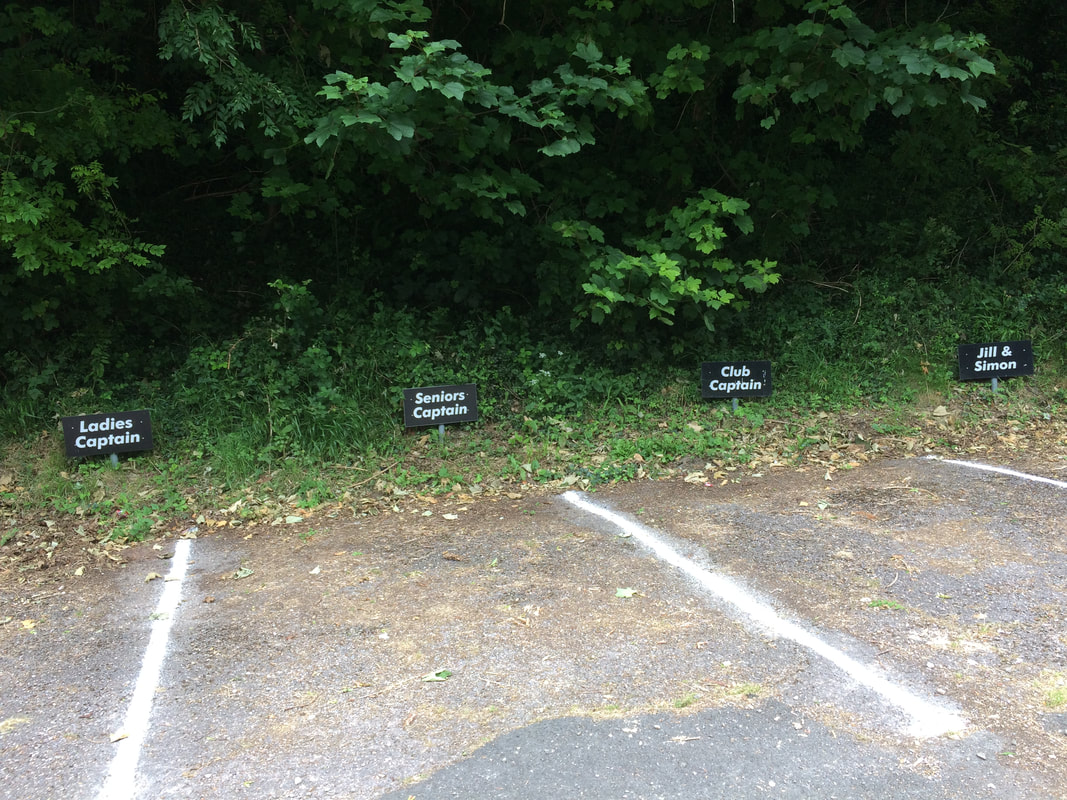 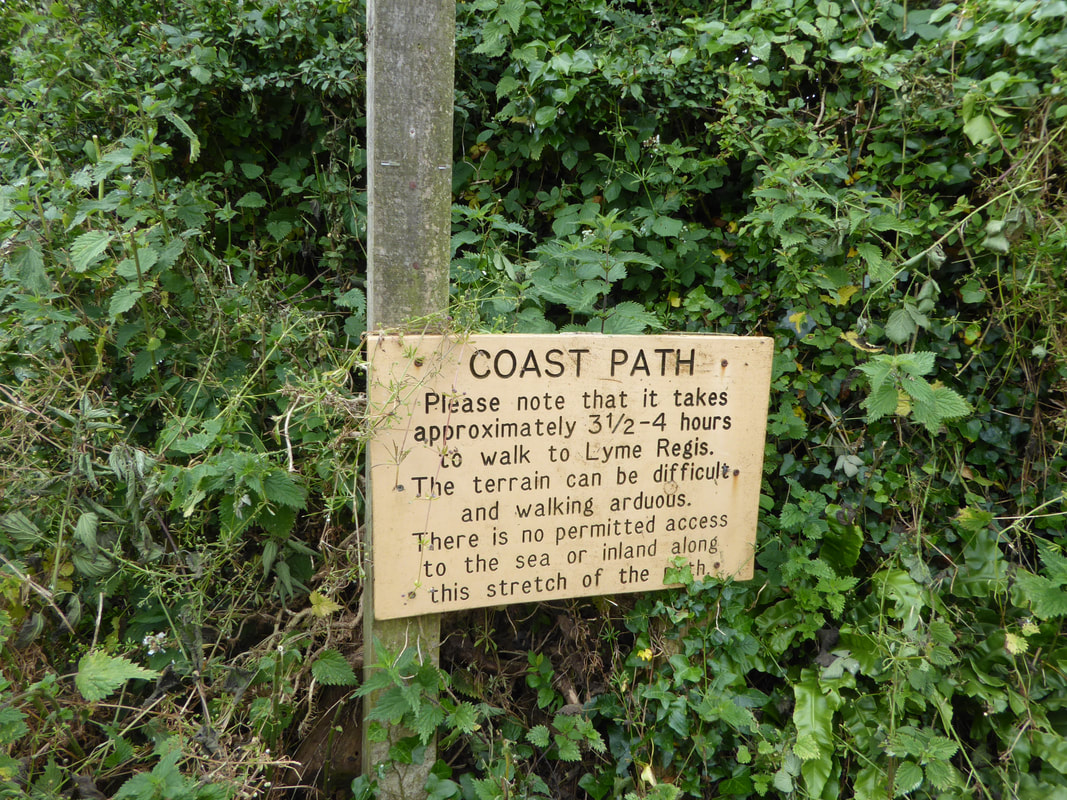 No matter how much you dress it up, this part of today's walk was a real trudge. Took us just under 3 hours. 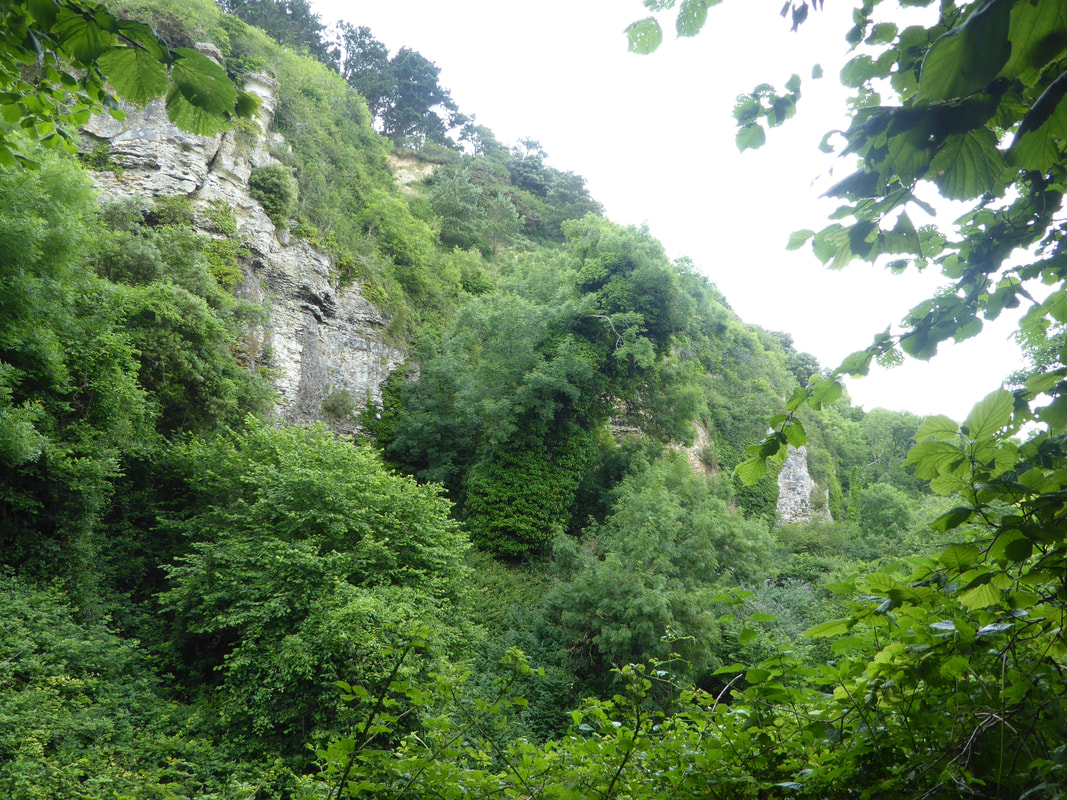 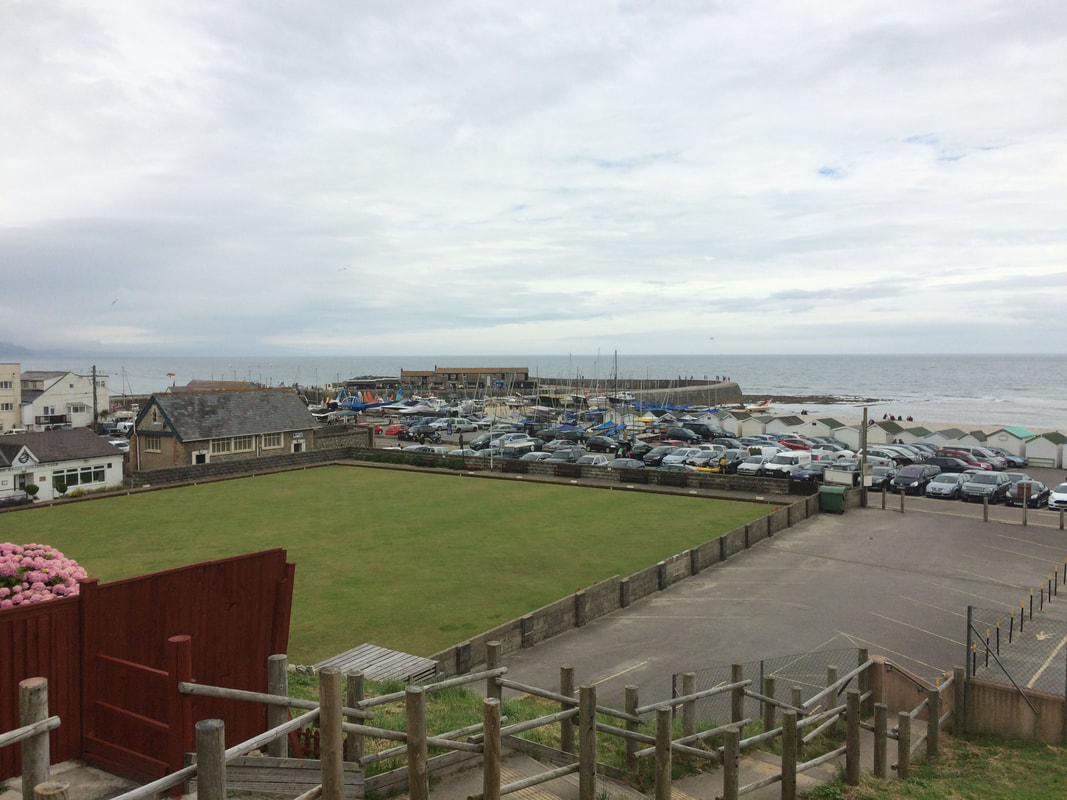 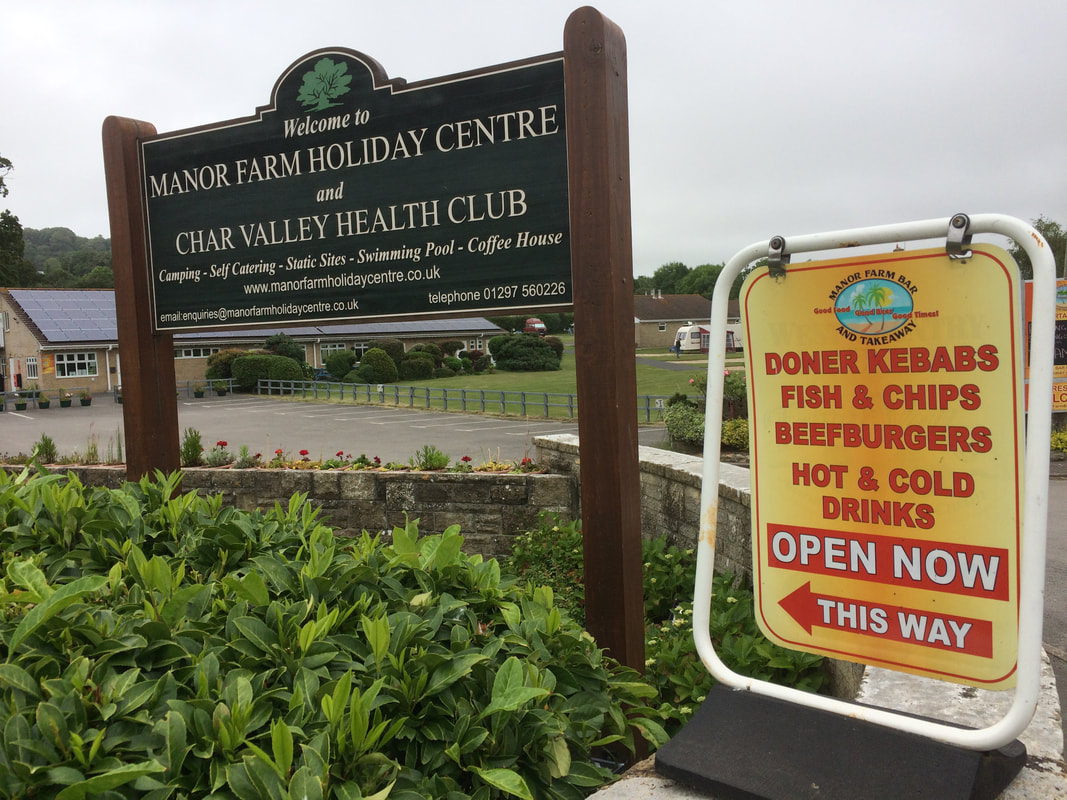 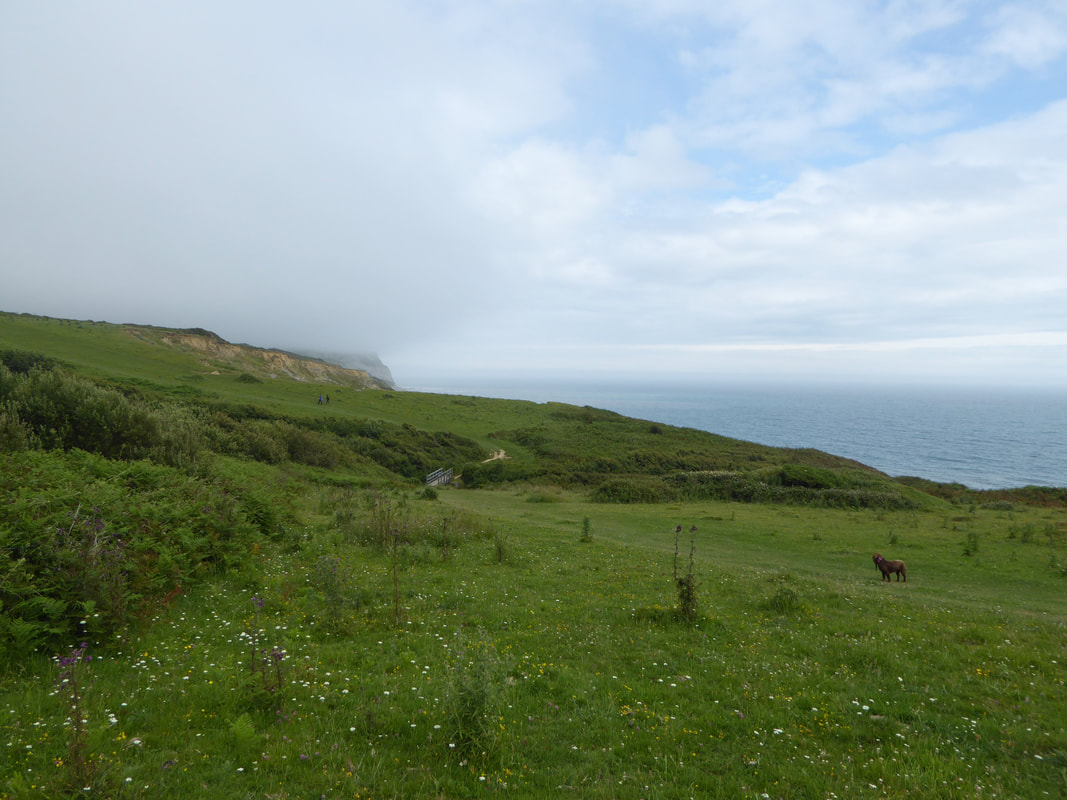 Above Dover Ledge - Golden Cap is ominously in cloud 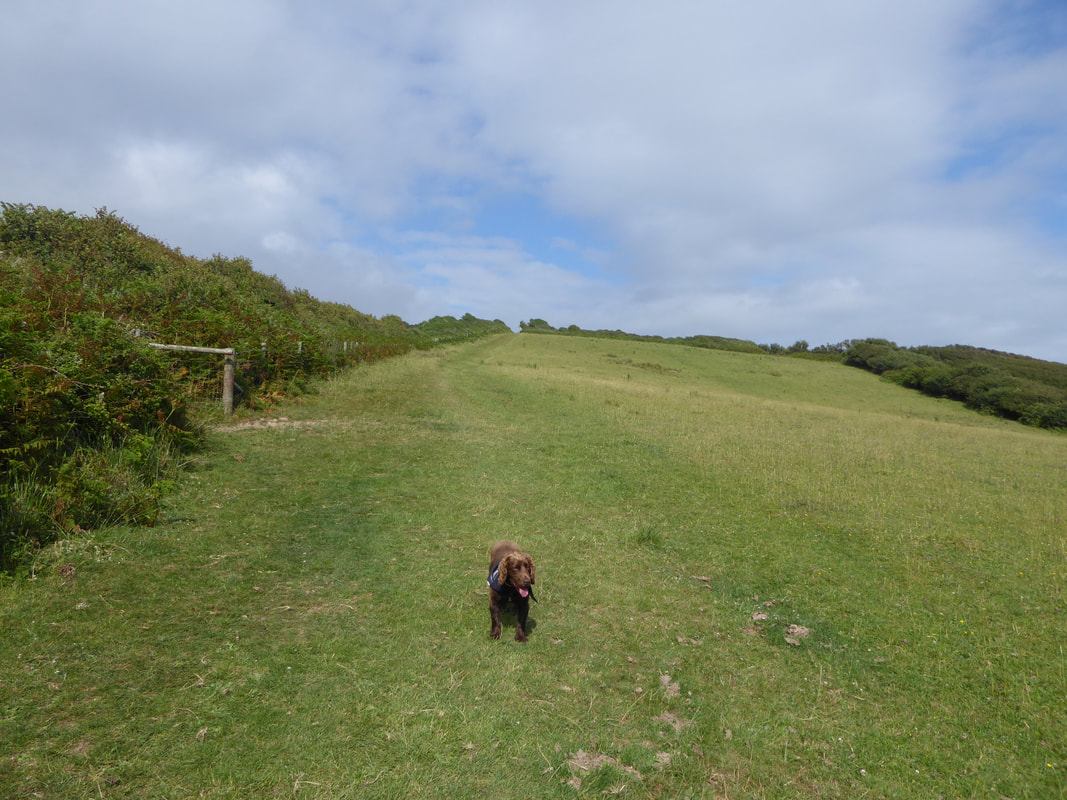 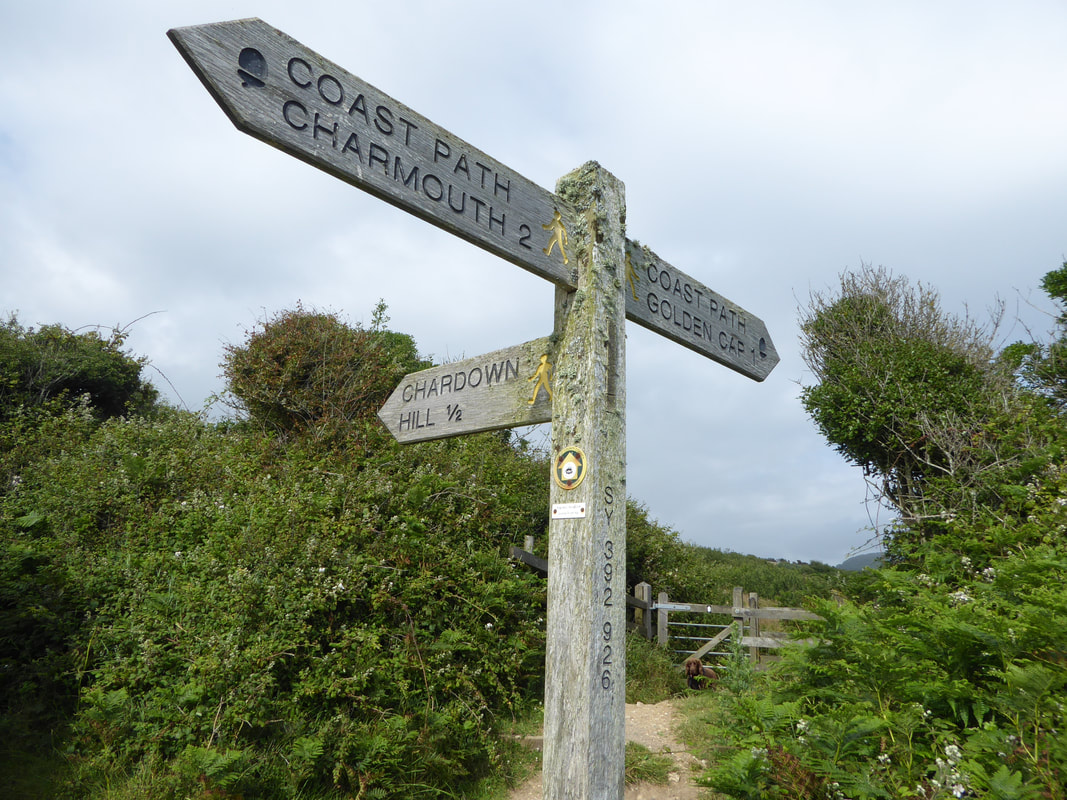 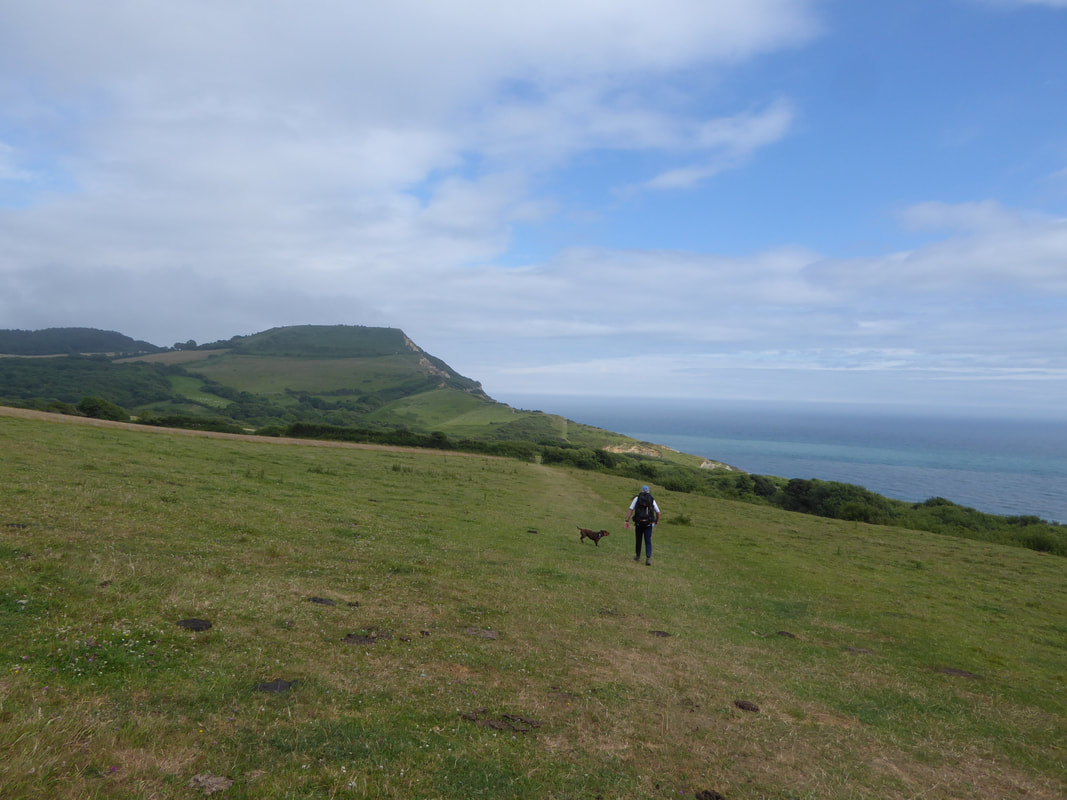 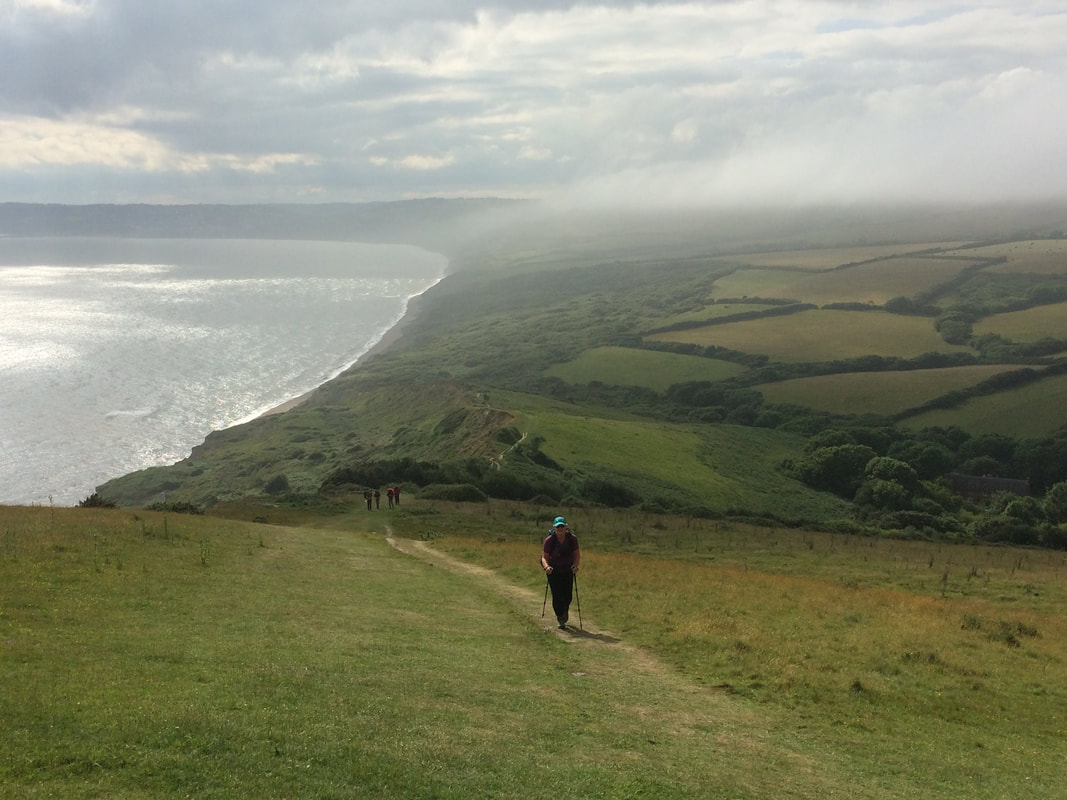 The ascent of Golden Cap 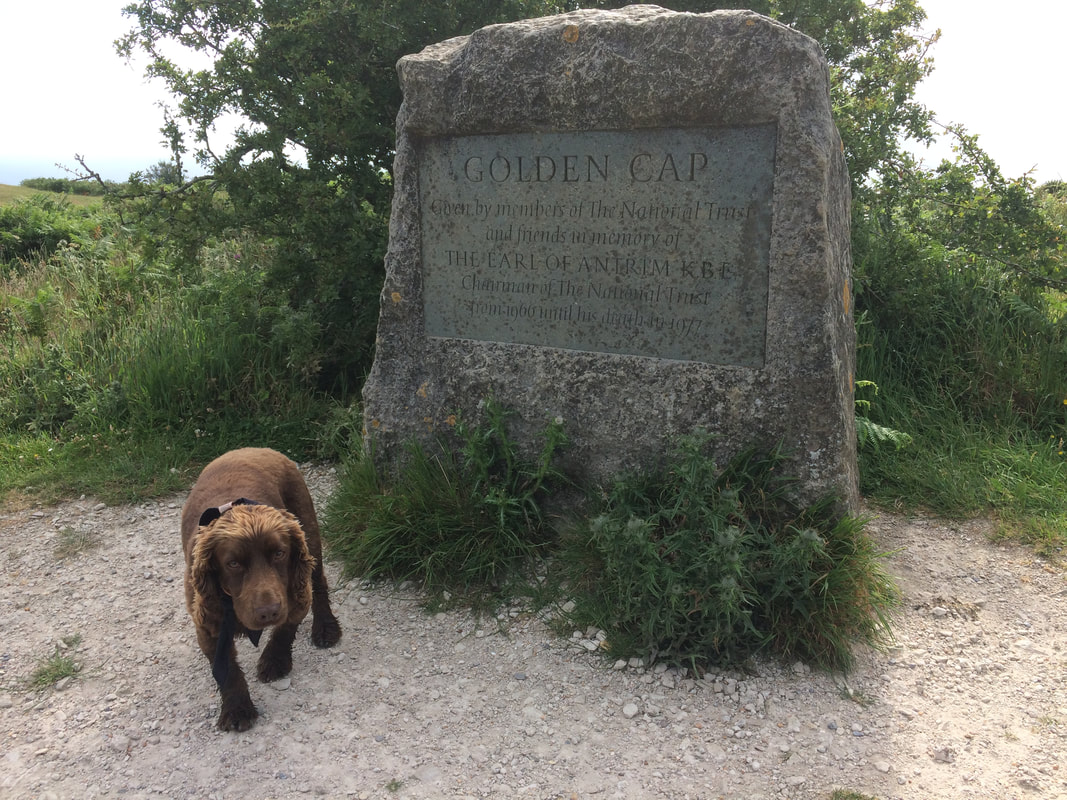 The memorial to the Earl of Antrim on Golden Cap 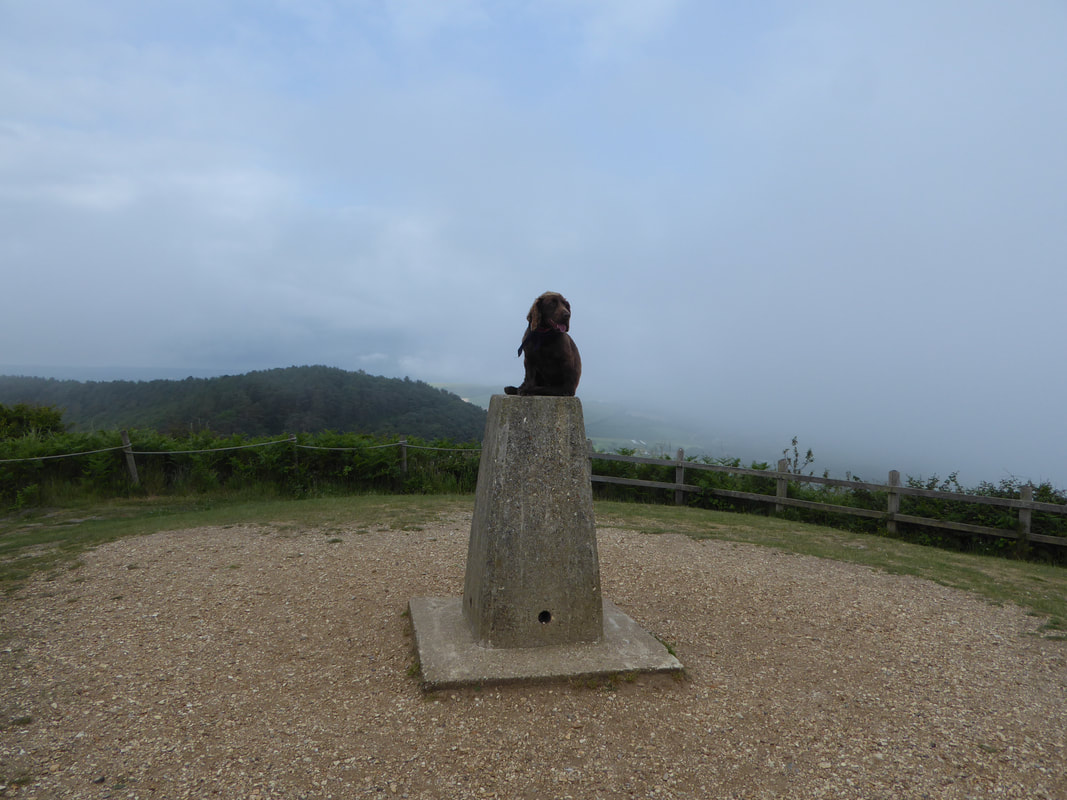 The Trig Point on Golden Cap 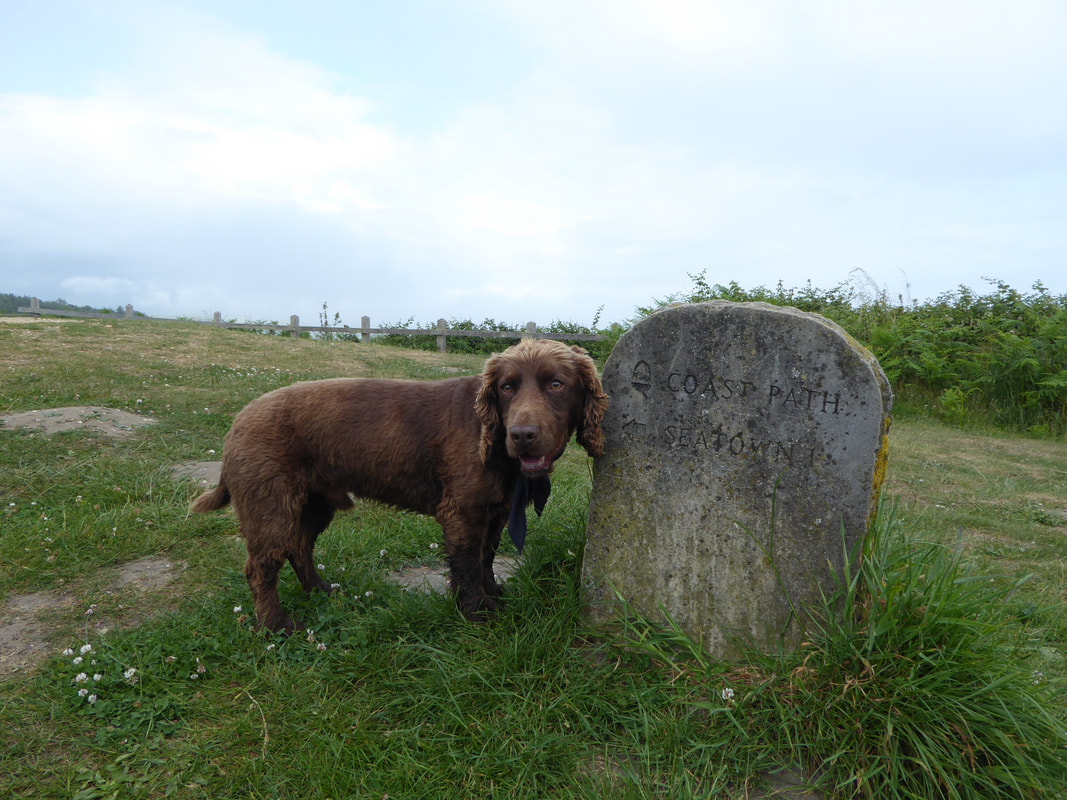 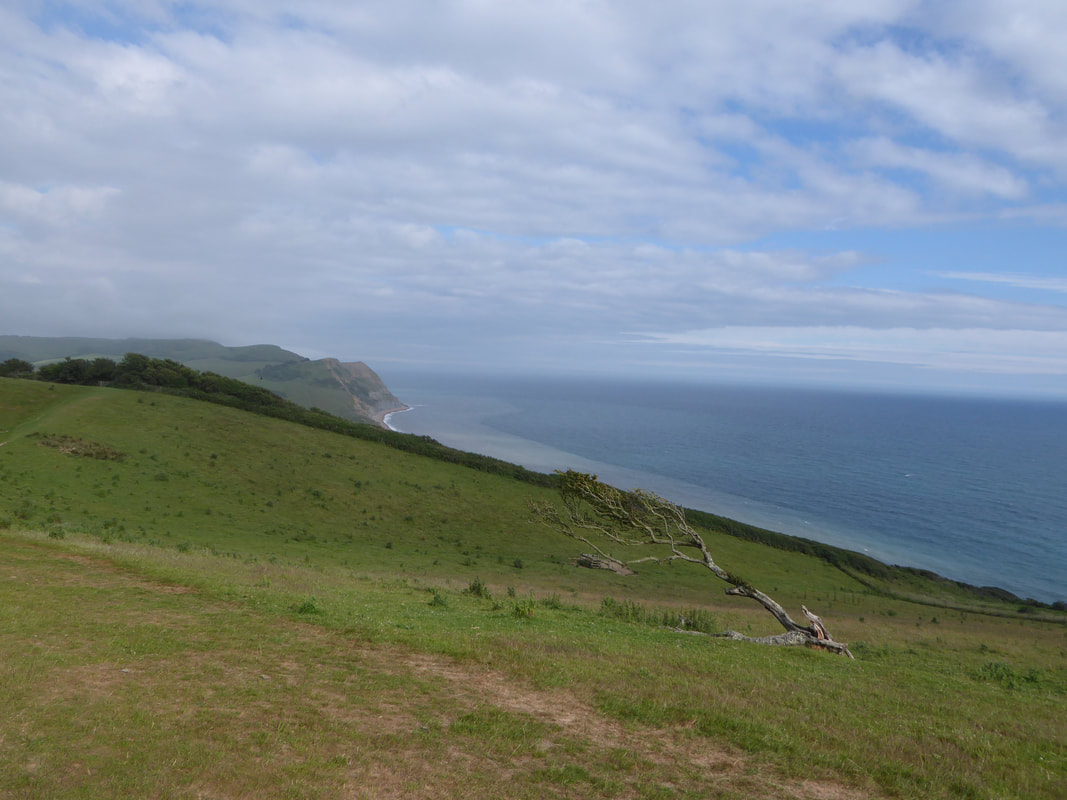 You can tell which way the wind blows here 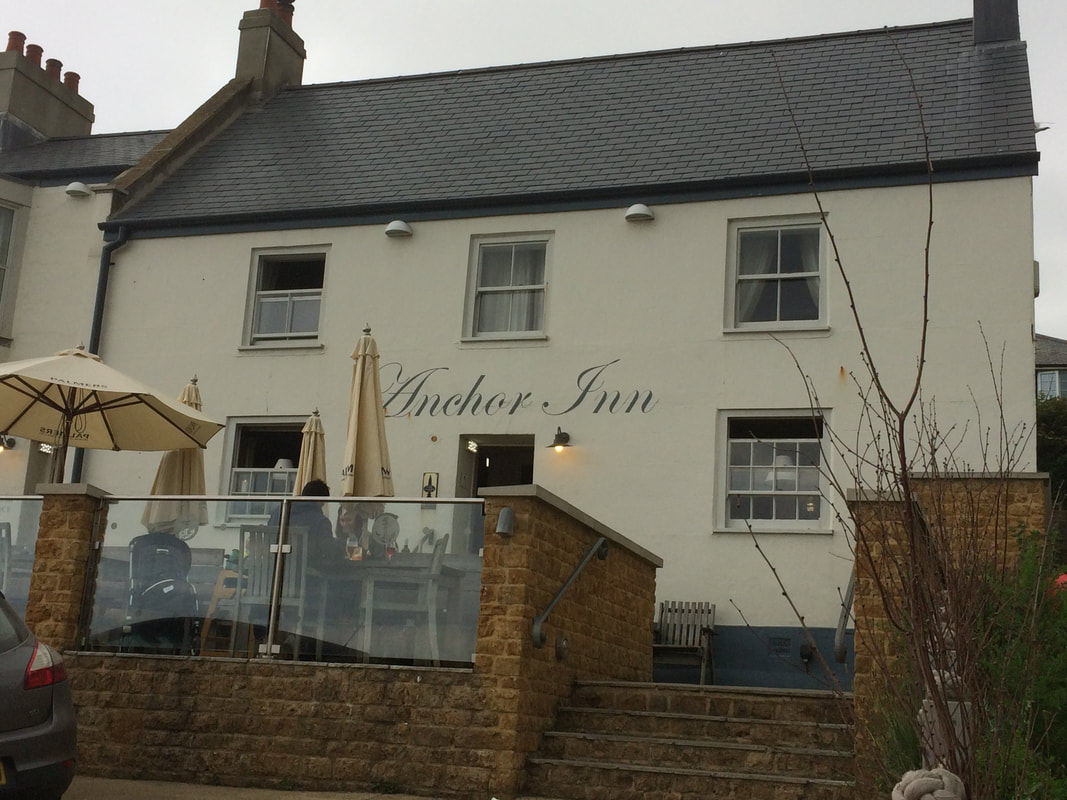 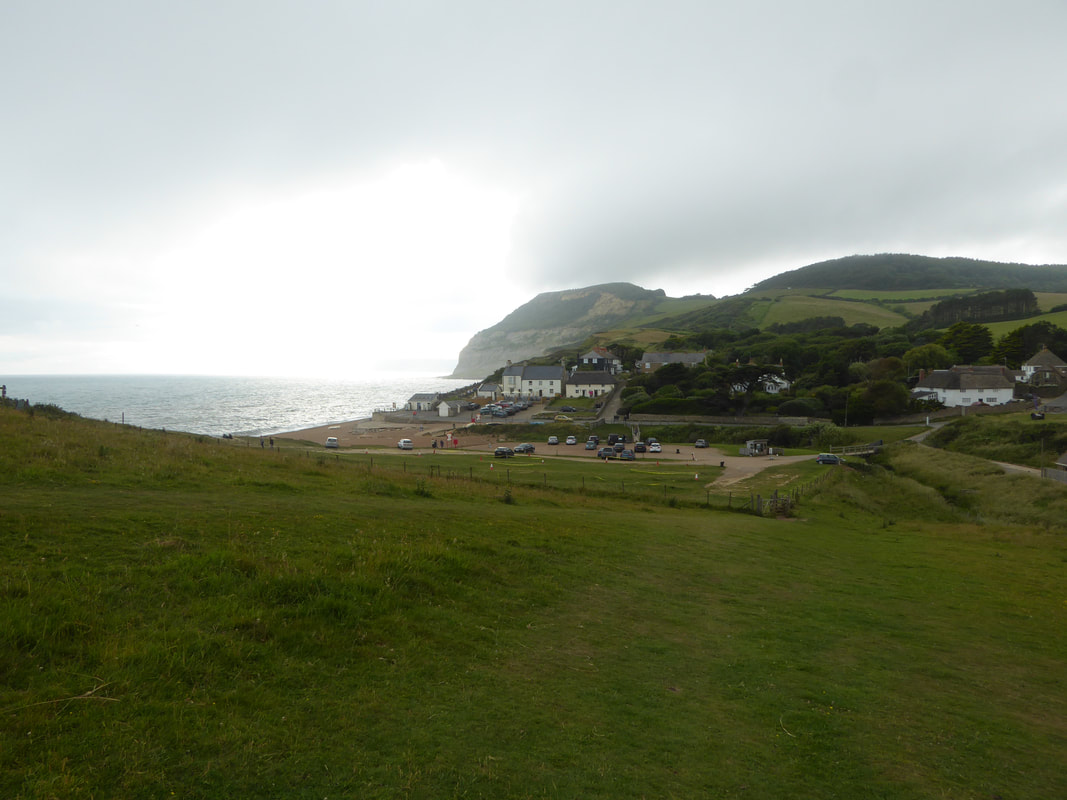 Looking back to Seatown and Golden Cap 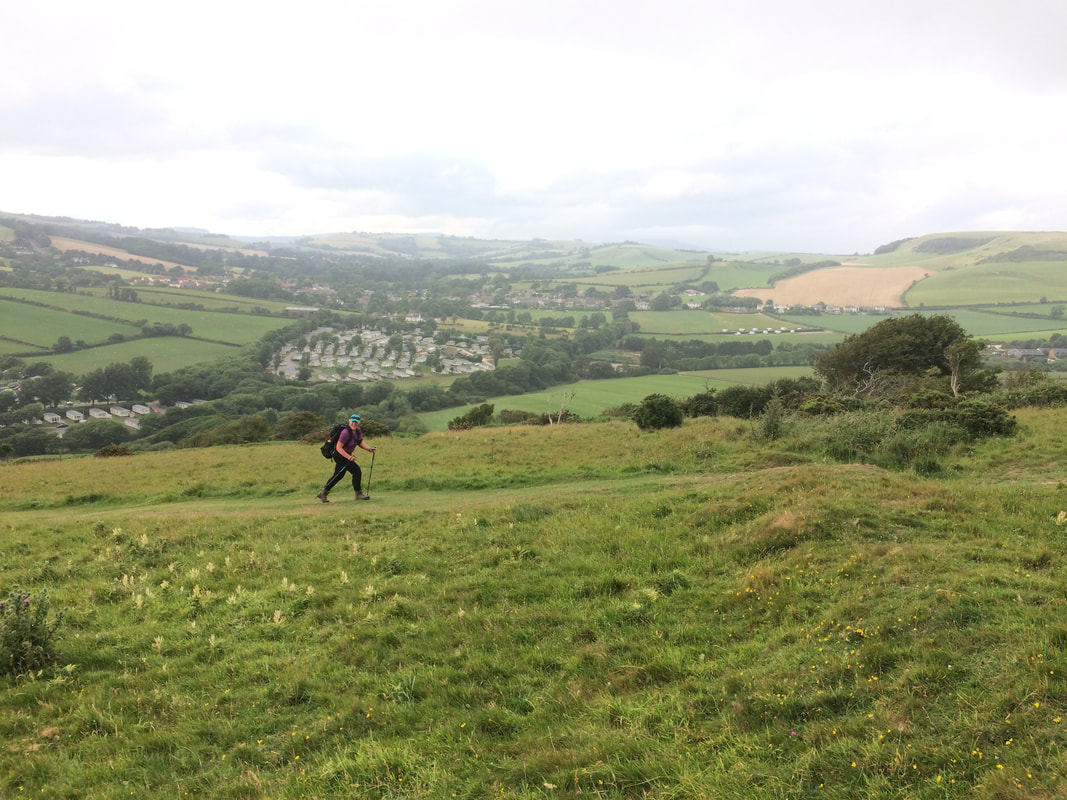 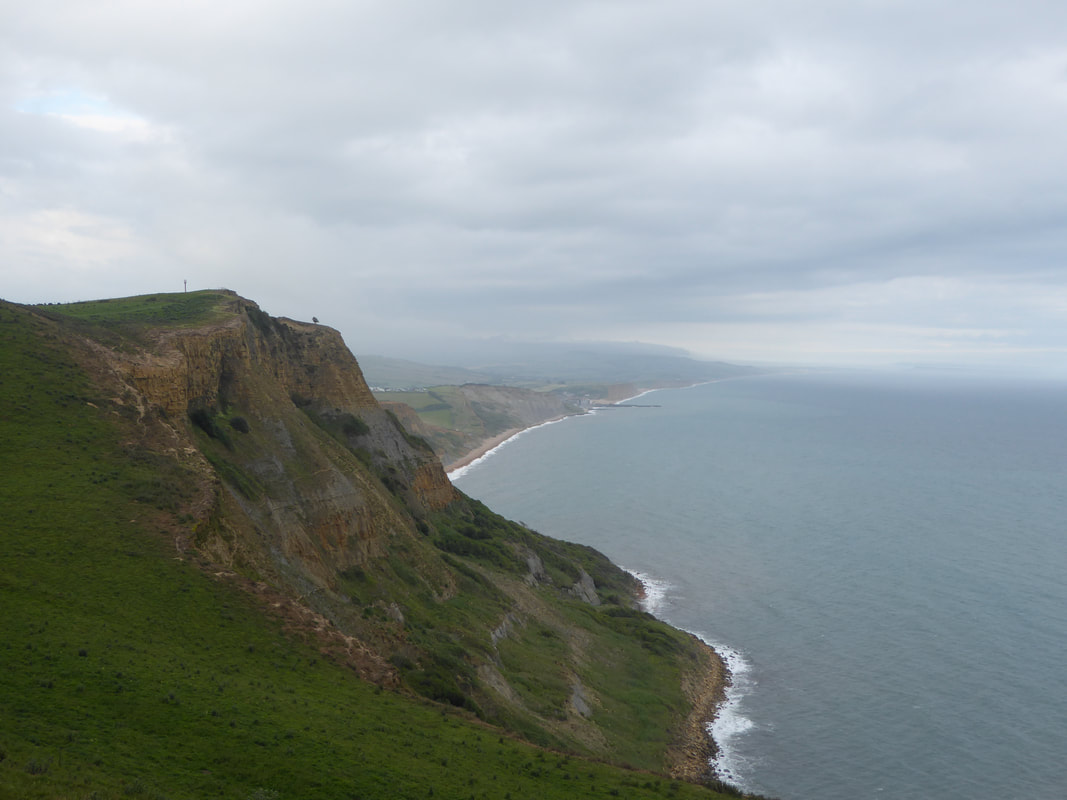 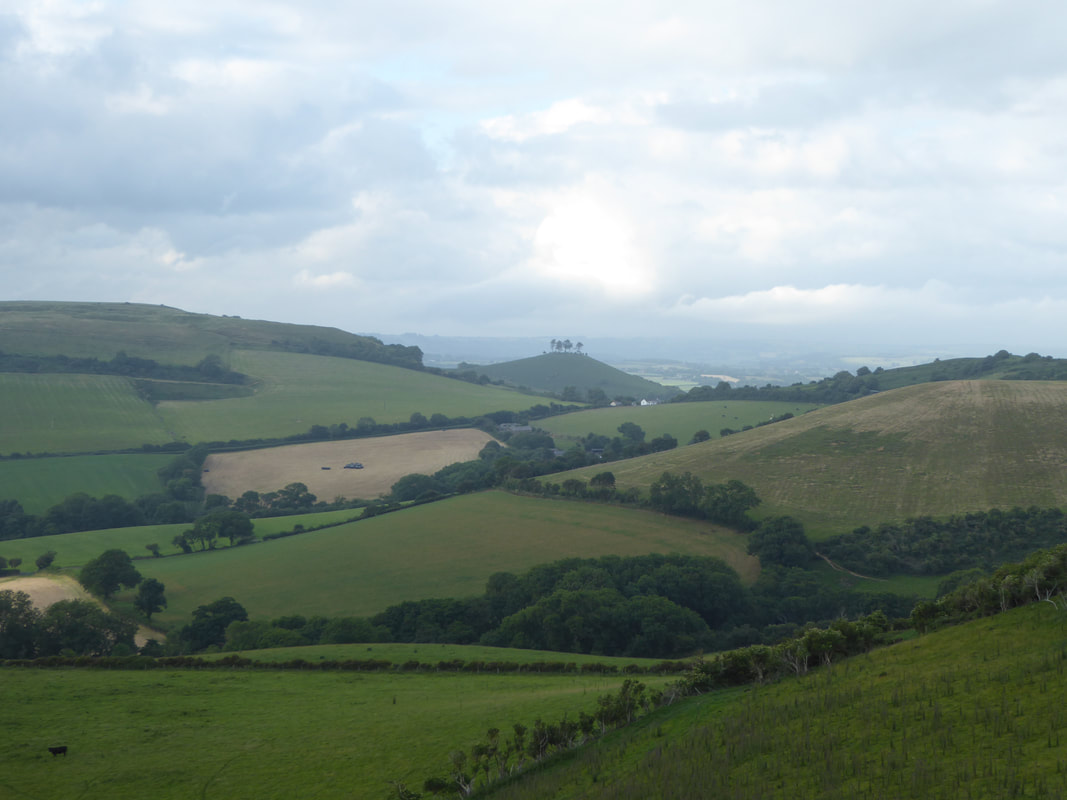 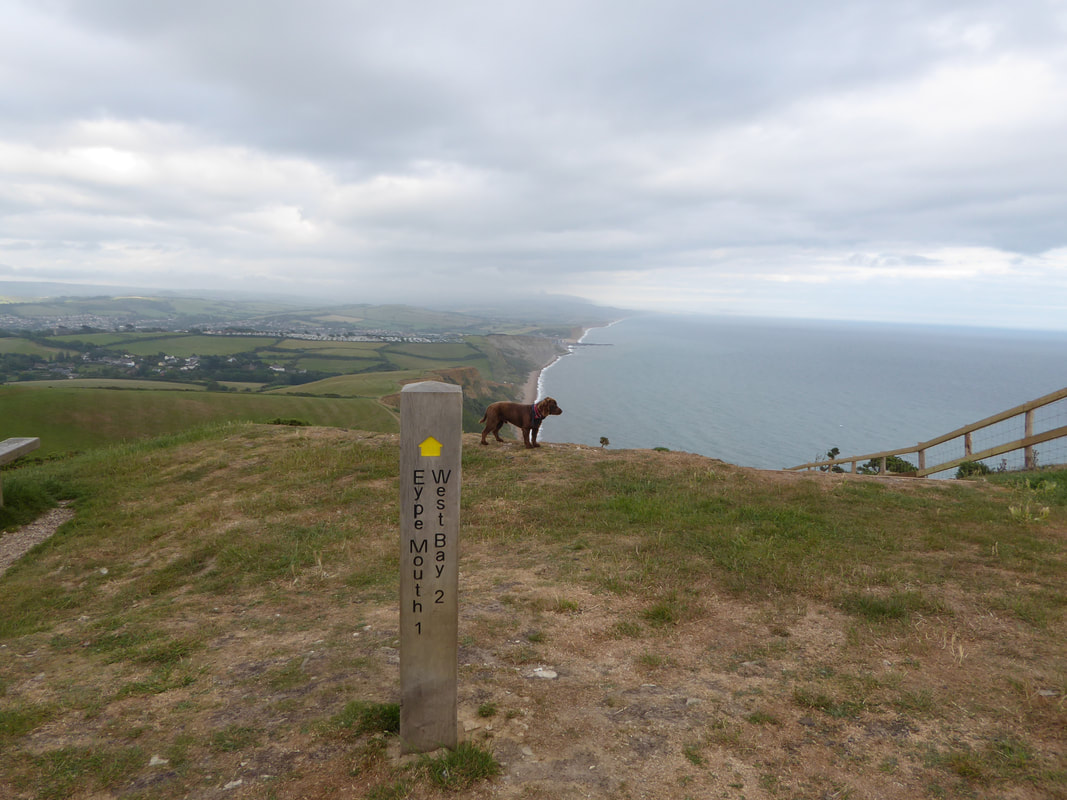 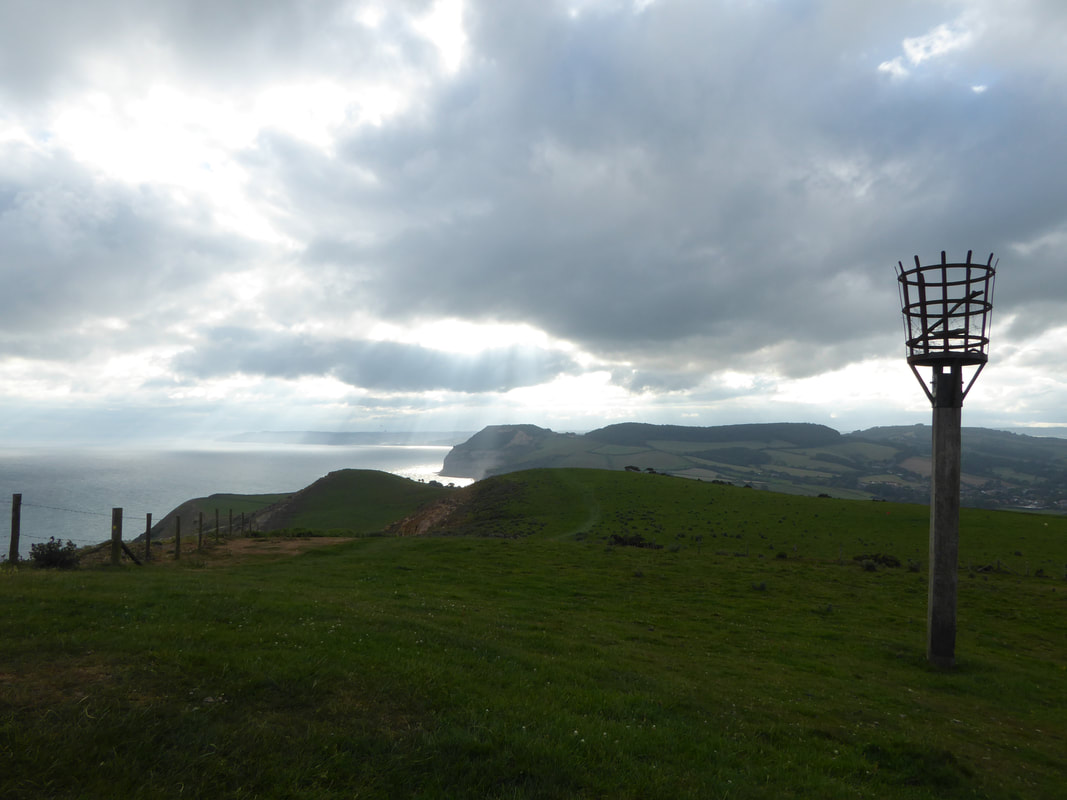 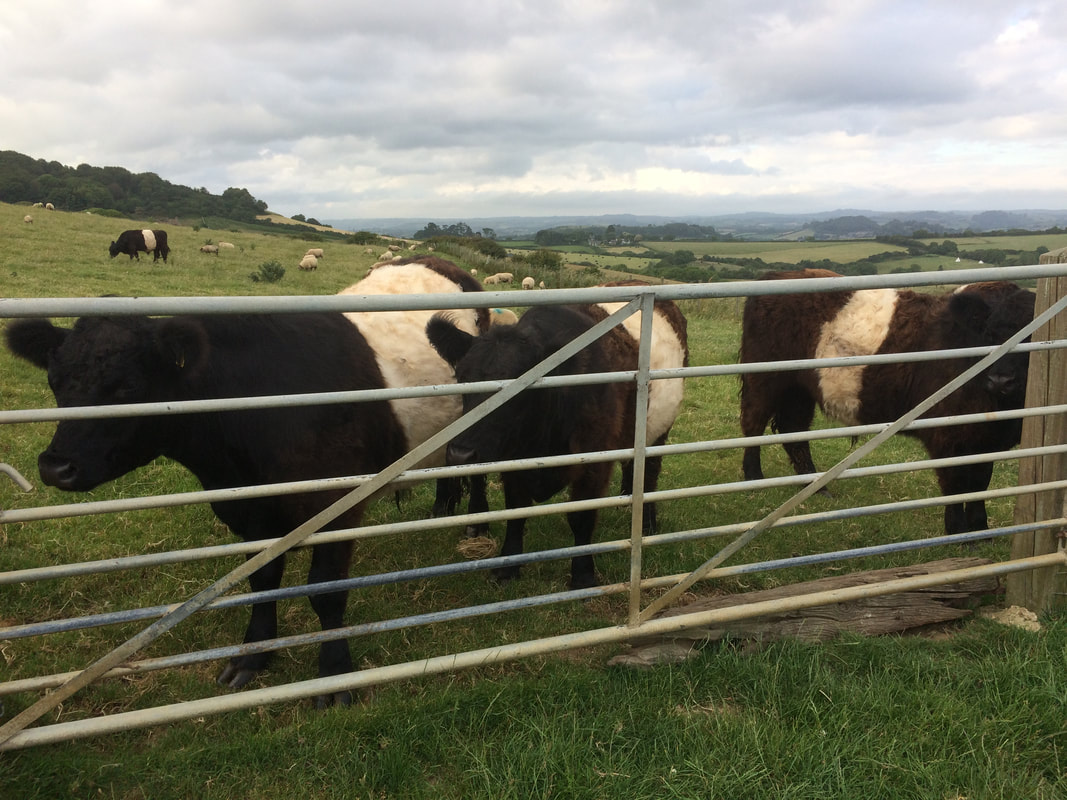 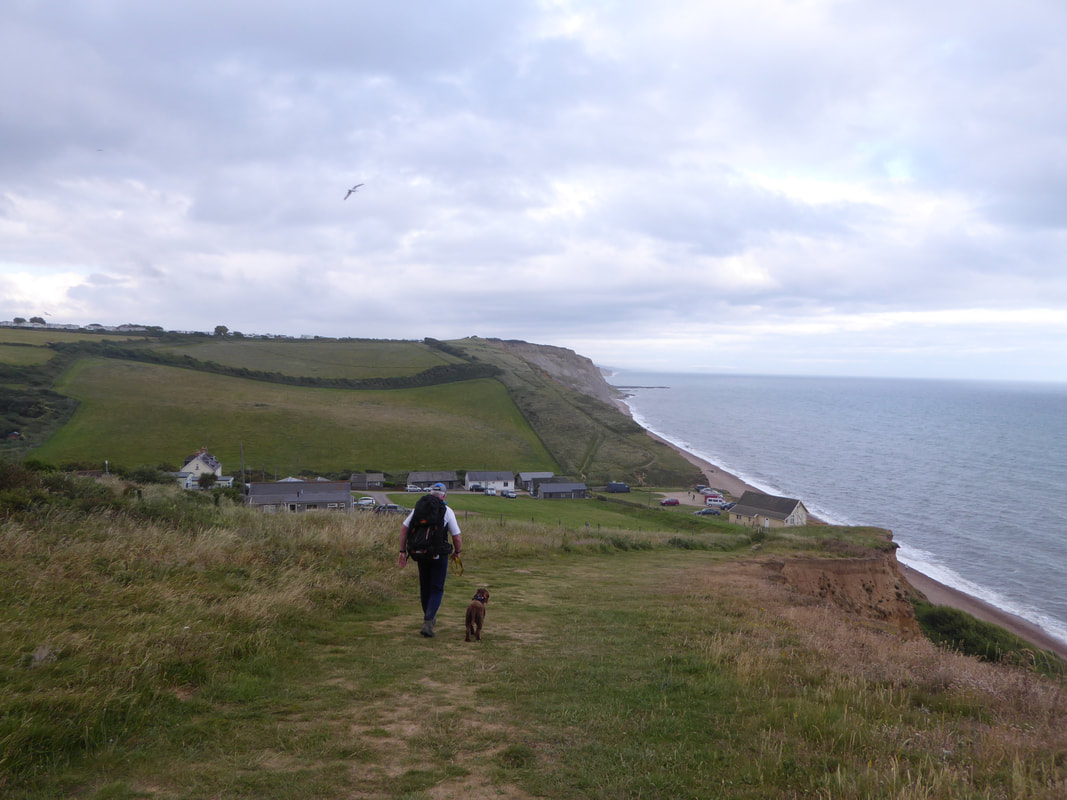 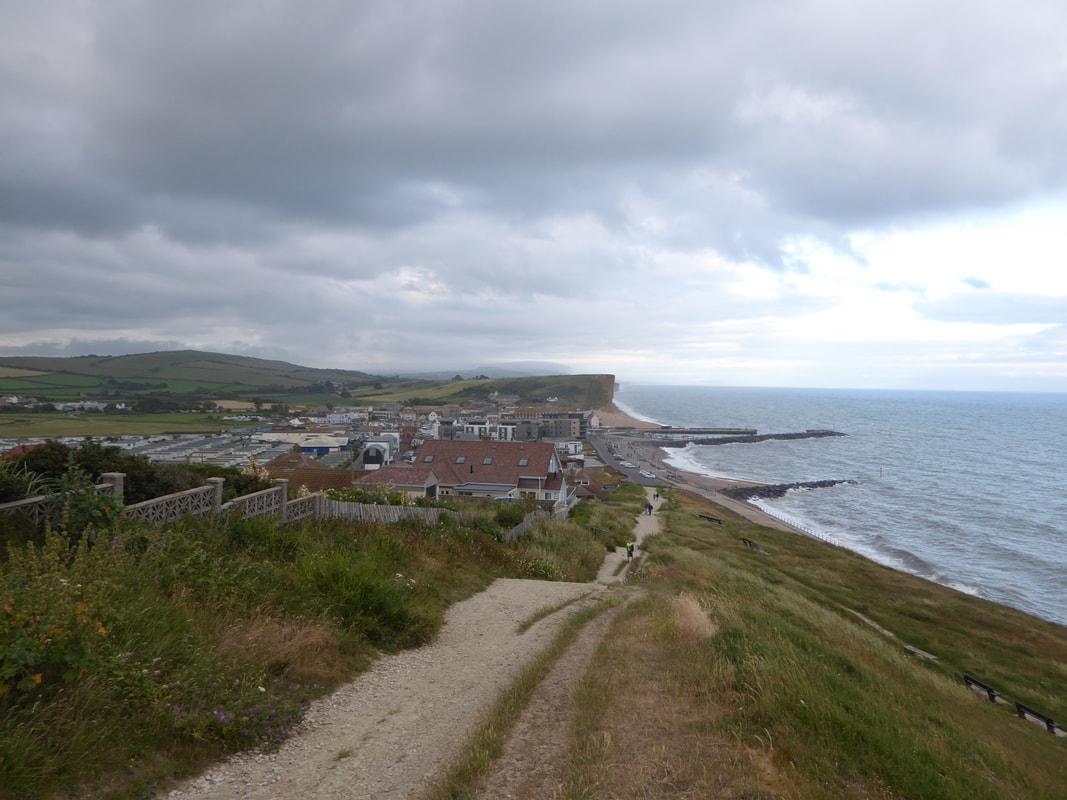 With relatives in Bridport​
Day 46 Data