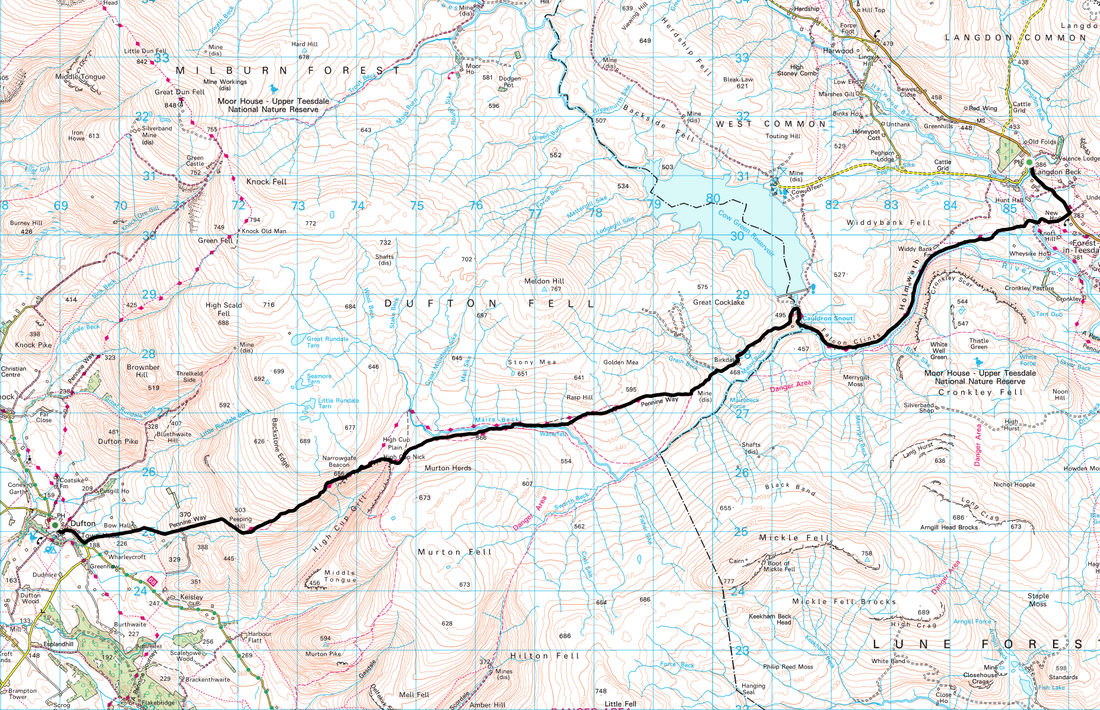 We awoke to an overcast day with the threat of rain however the wet stuff would only be with us for the first couple of miles. The wind was due to blow a fair bit therefore we would wait and see how hard and for how long. Having done the majority of todays route before, we knew we were in for a really good day with visits to Cauldron Snout and High Cup on the agenda. At nearly 14 miles, today was a long day but we intended to take our time and enjoy it. We were not staying in Dufton that night as we could not find any dog friendly accommodation in the village and instead we were being picked up and taken over to Appleby, a couple of miles away

The Langdon Beck Hotel is a nice place to stay. Unpretentious, clean and serving good food and beer, Sue and her team looked after us very well and we enjoyed another good breakfast - dining alone as we were the only guests. Just before we set off we had a chat with Tony the Brigantes Driver who was transferring our baggage over to Appleby - he clearly loved his job and it is easy to see why.

As we made our way back along the B6277 to rejoin the route the drizzle started - gentle at first then heavier which coupled with a strong headwind made for an interesting start to the day. We crossed Langdon Beck at the bridge and headed over a boggy stretch which thankfully was duck boarded for the most part. Passing Widdy Bank Farm and giving a herd of cows a wide berth, there then began a glorious stretch along the River Tees and thankfully the drizzle had stopped by this time. The route hugged the river and passed through a notorious boulder strewn section below Falcon Clints. Much is made of the difficulty of this section but if you take your time it is easy enough. 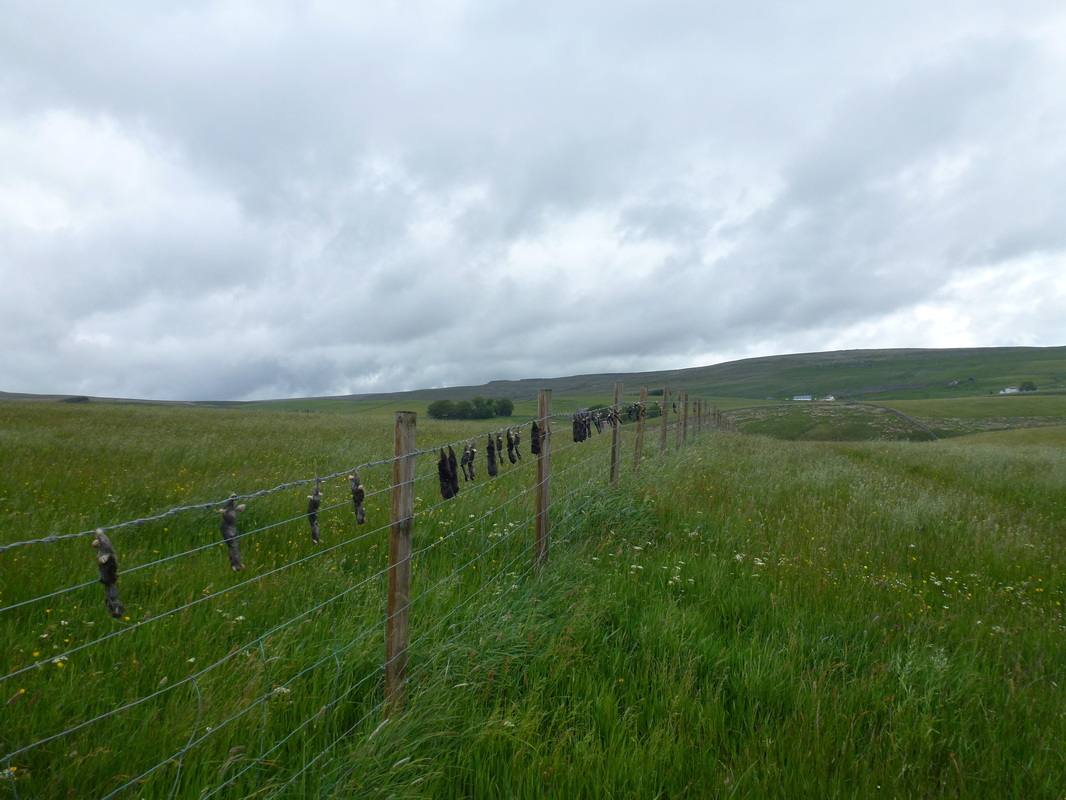 Caught Moles near the Tees close to Widdy Bank Farm 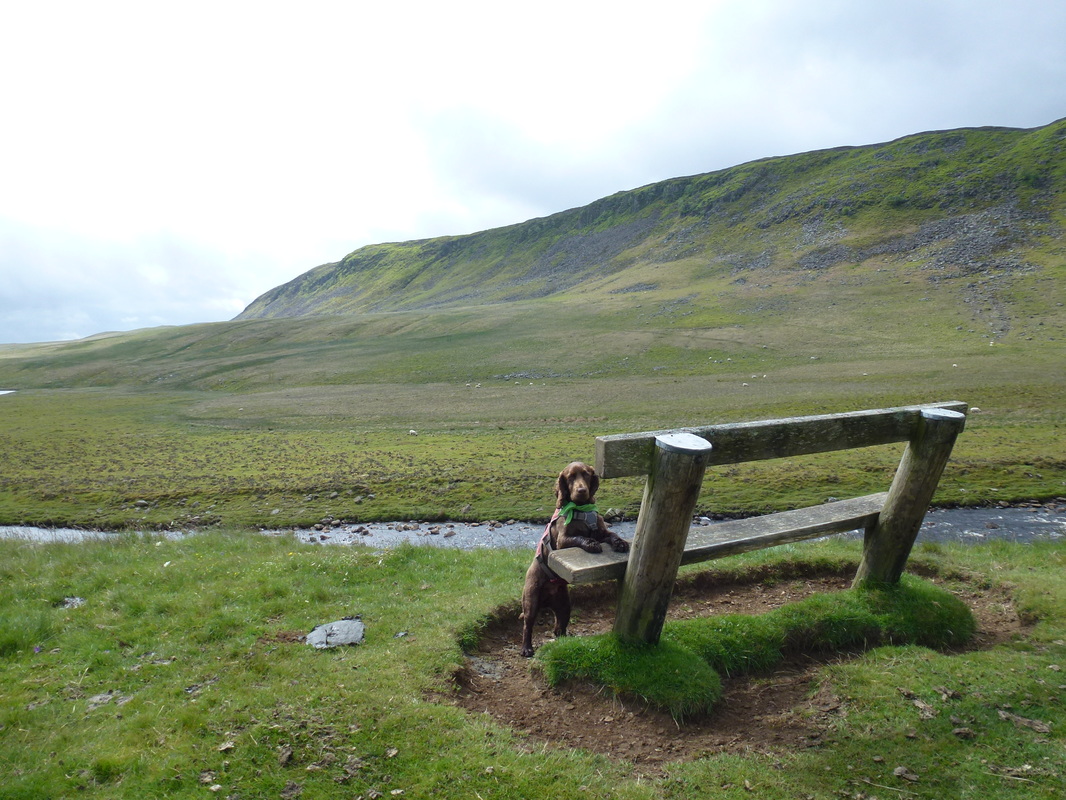 Fudge needs a leg up - Cronkley Scar is to the rear 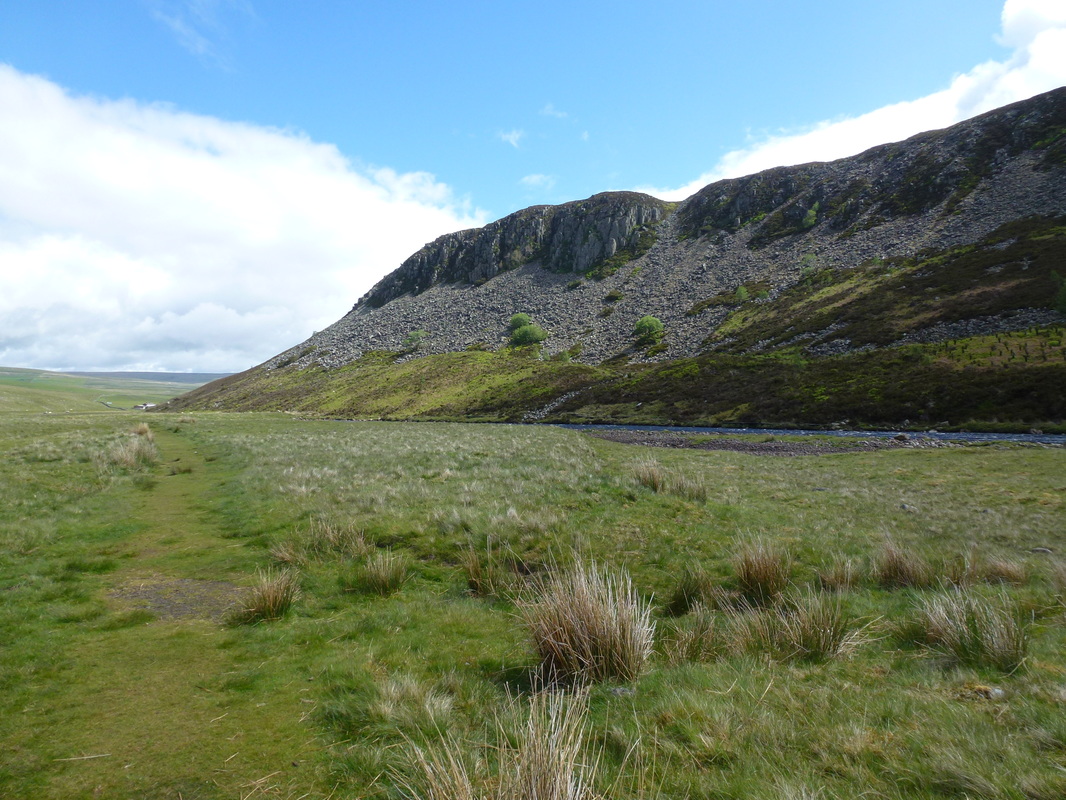 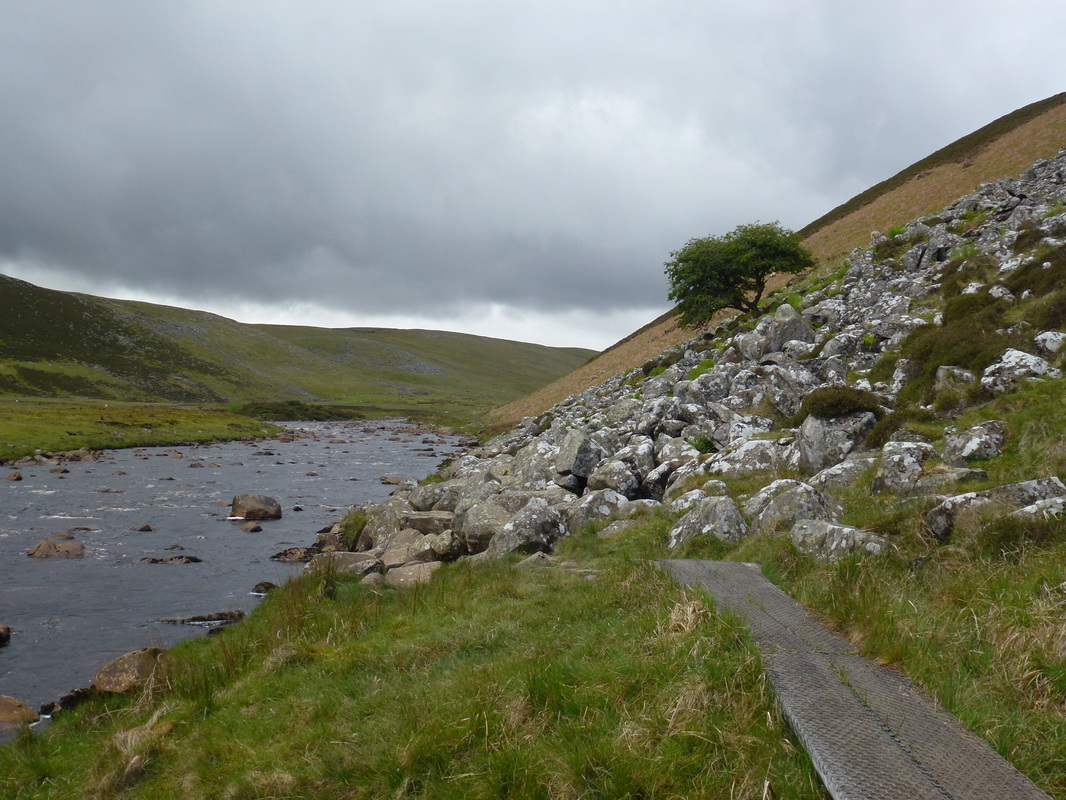 Below Falcon Clints along the River Tees. Much is made of "the boulder field" along this section. Take your time and it's a doddle. 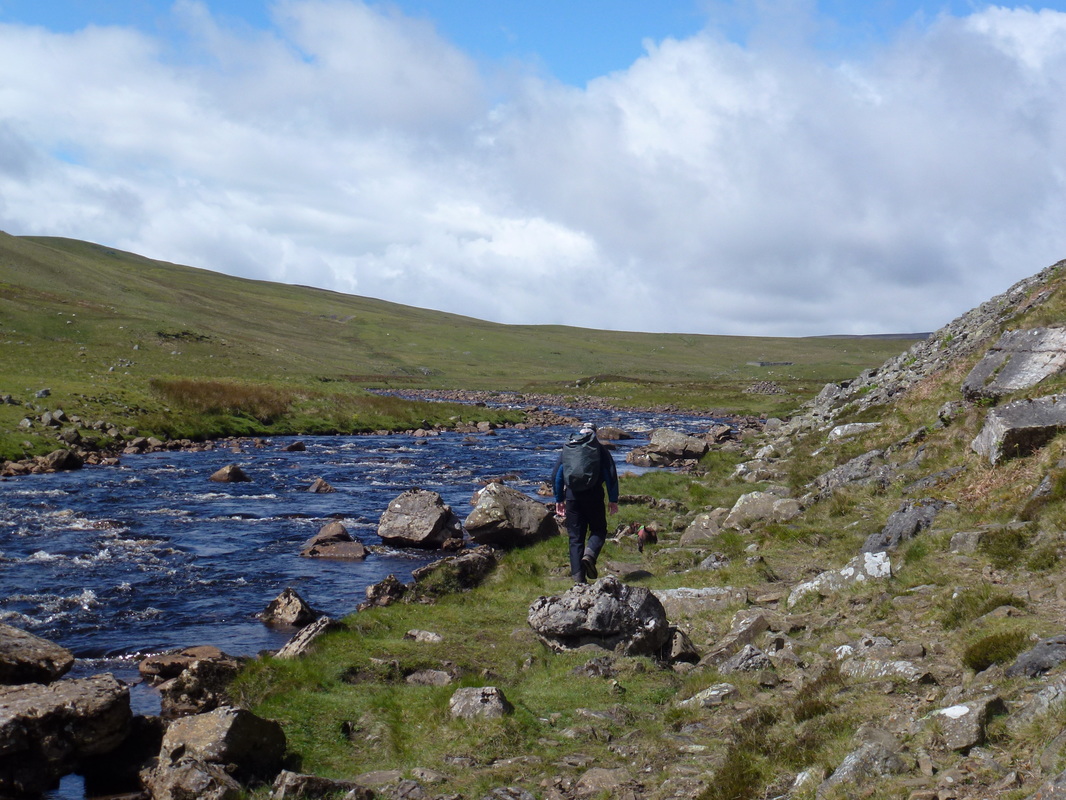 The boulder field is intermittent and only really applies to a small section below Falcon Clints
​The path then left the boulders behind and became level again to pass by Lingy Holme over more duckboards and slabs to reach a big bend in the Tees. Rounding the bend the noise gradually increased and all of a sudden the waterfall come cataract of Cauldron Snout became visible. Even though we were here last year, the sight and sound of the waterfall was still a surprise and very impressive. The Snout is immediately below Cow Green Reservoir and is caused by the upper Tees passing over the dolerite steps of the Whin Sill. These days engineers control the flow of the waterfall. 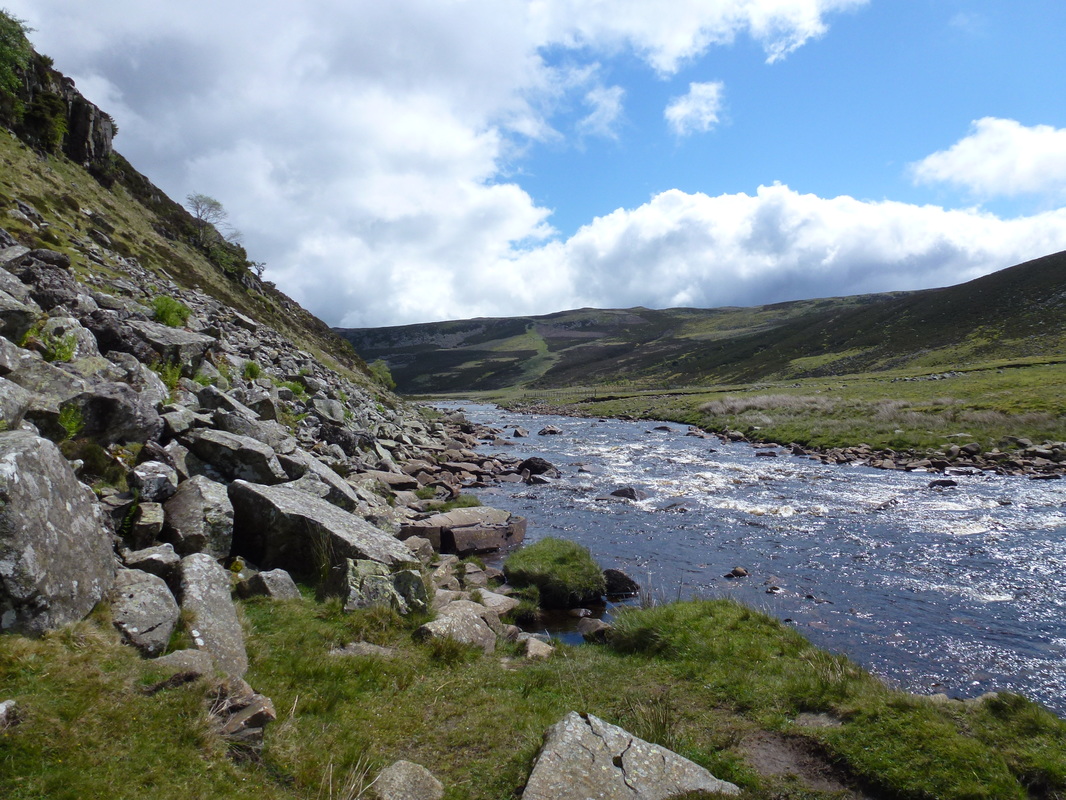 Looking back to the boulders 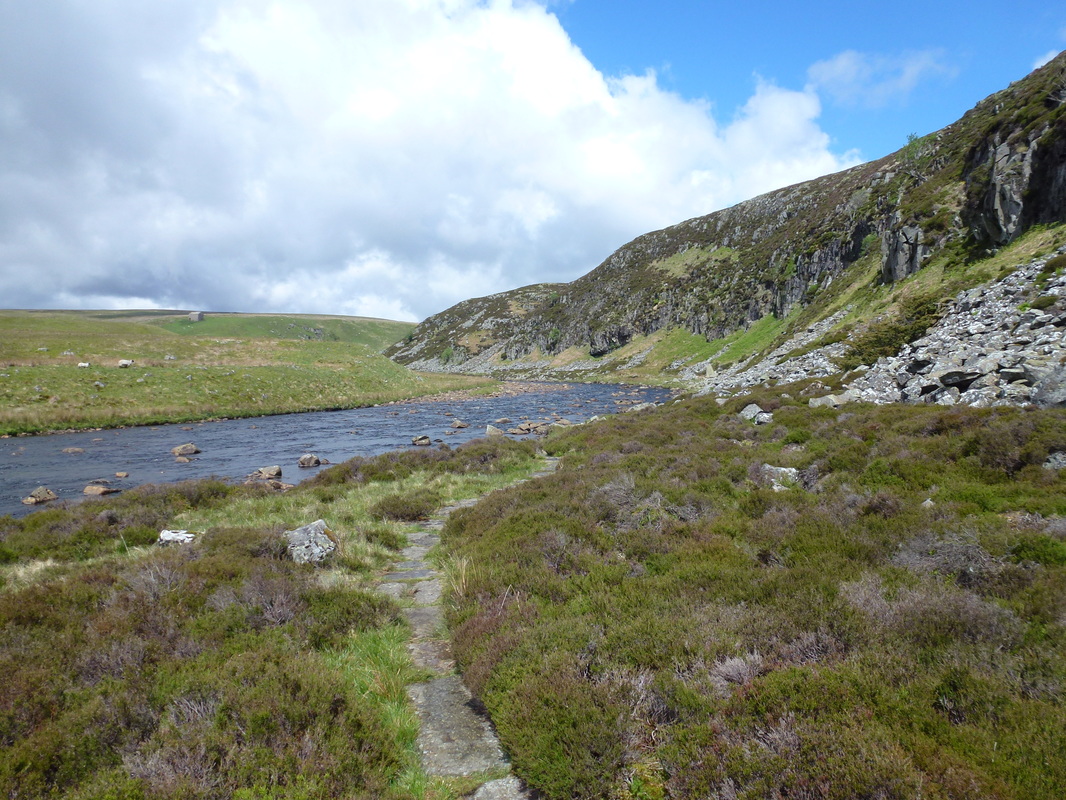 Nearing the turn in the river that leads to Cauldron Snout 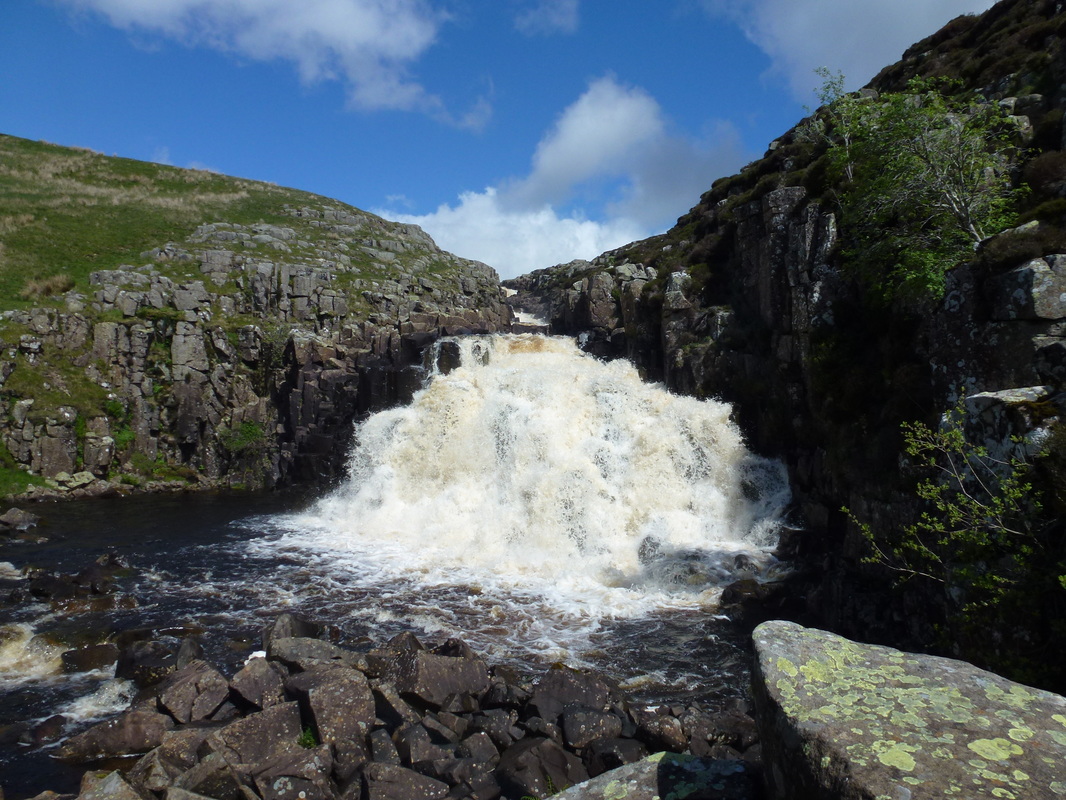 Cauldron Snout
After a half hour break for lunch we then enjoyed the rocky and steep scramble up the eastern side of the waterfall which looks precarious from the bottom but is an enjoyable climb. Reaching the Dam wall we crossed over the bridge to join a good track to Birkdale Farm. The farm was also featured in the same series as Hannah Hauxwell (Too Long a Winter) which depicted the harshness of farming through the winter and, prior to the Cow Green Reservoir access road being built was over 3 miles from the nearest road. At the farm we bumped into a foreign couple who were carrying extremely large packs, especially the bloke - it looked like he was carrying all his worldly goods with him.​ 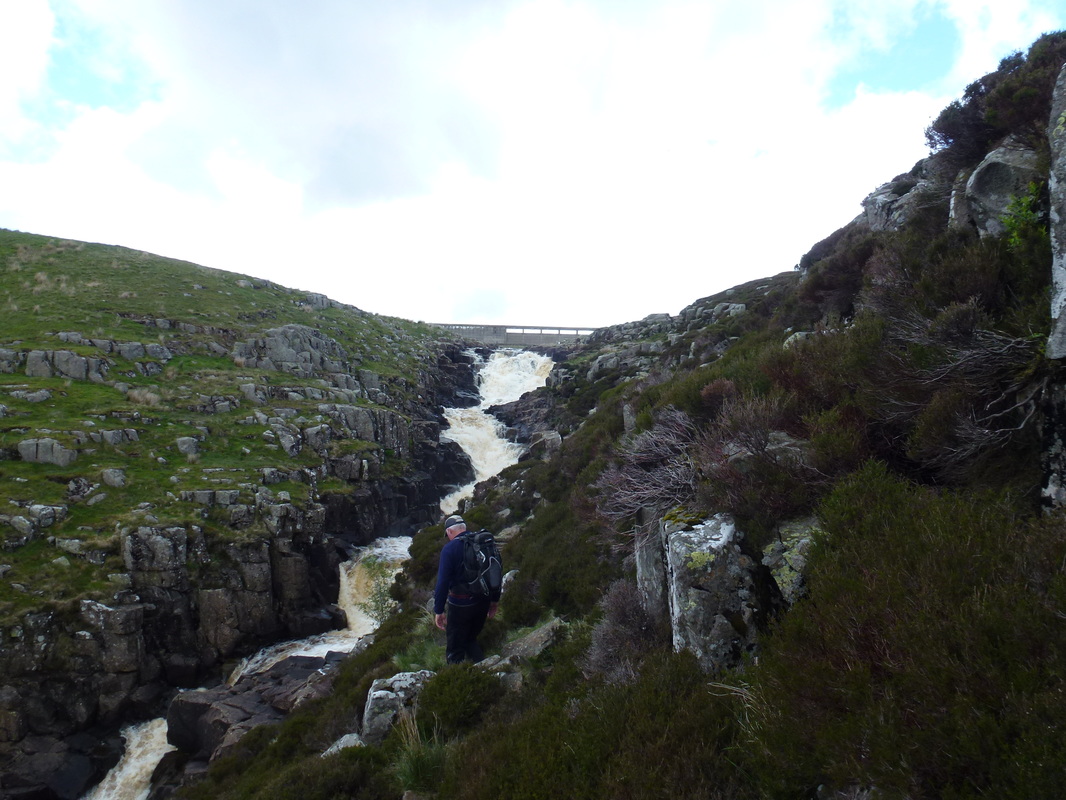 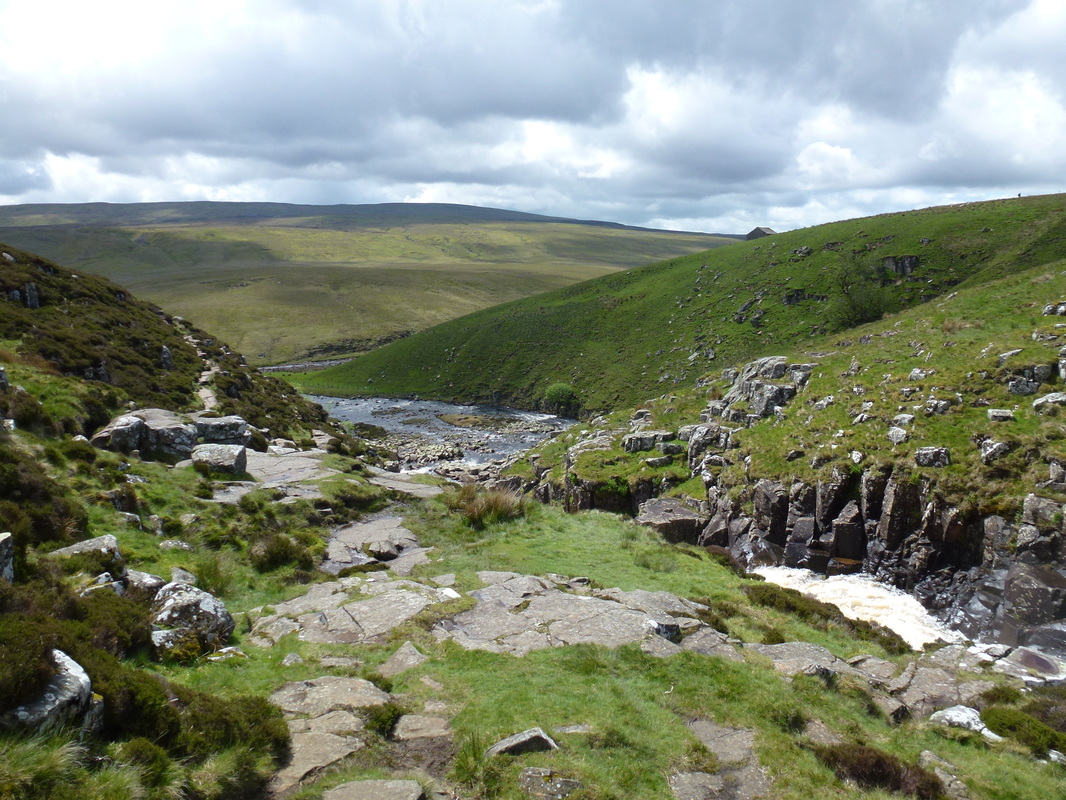 Looking back down Cauldron Snout 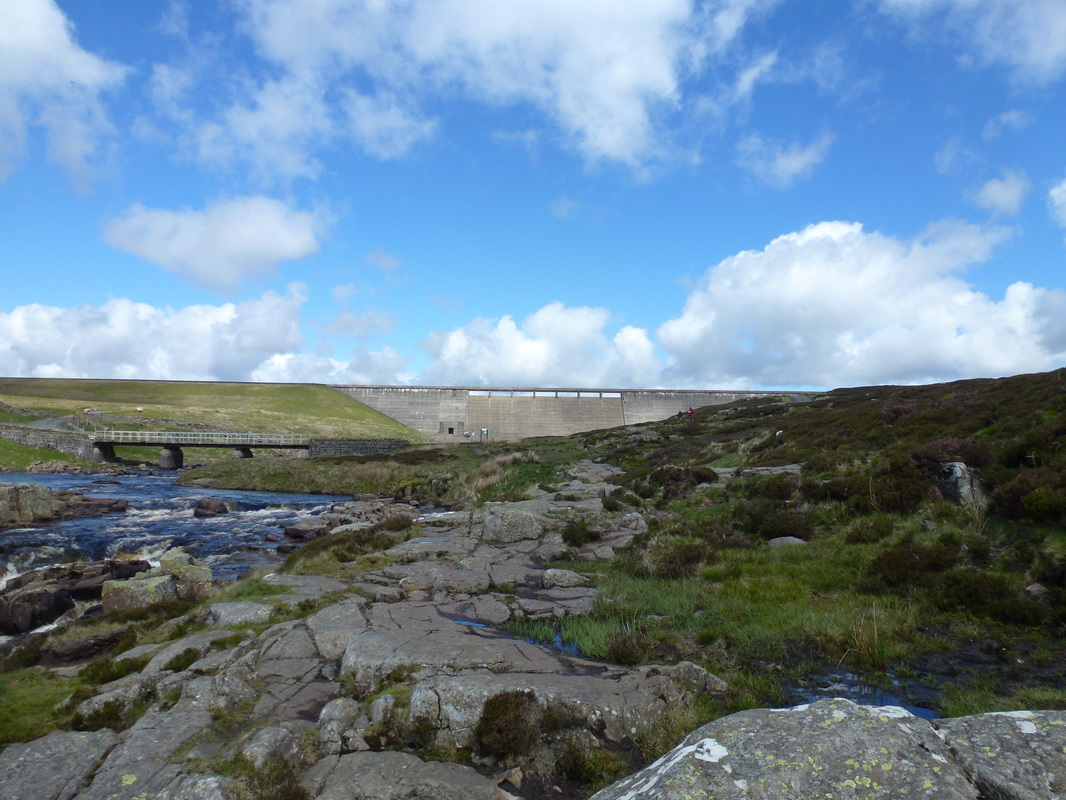 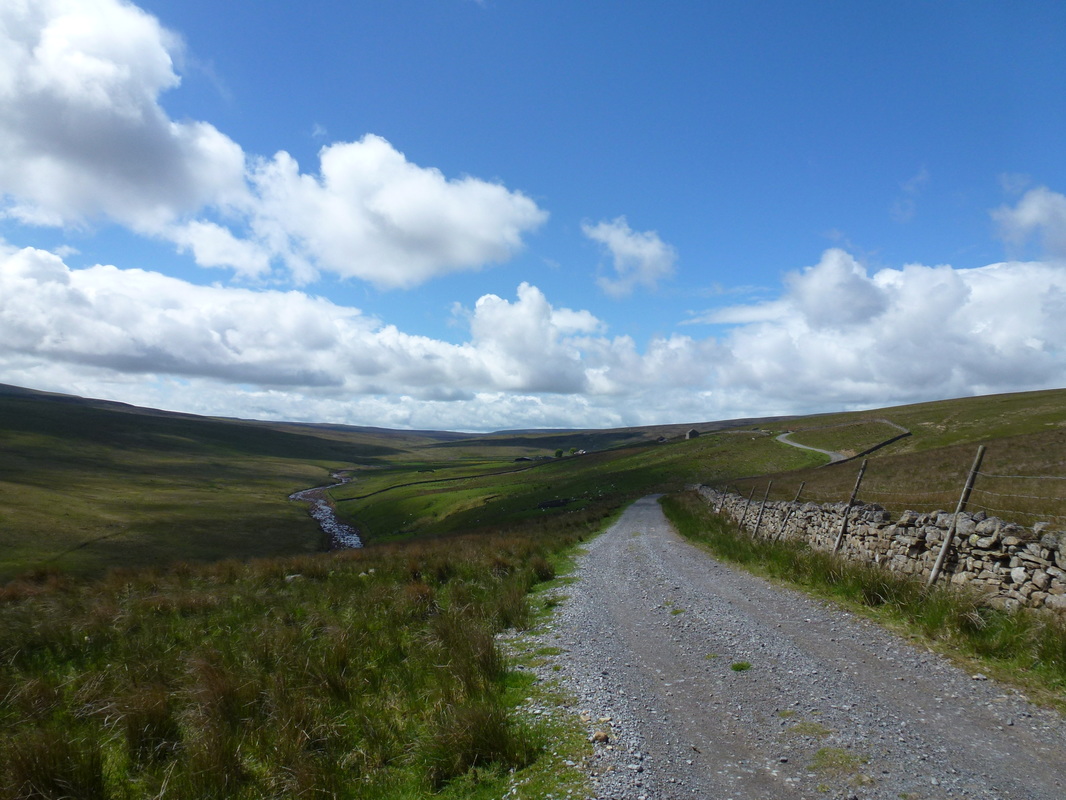 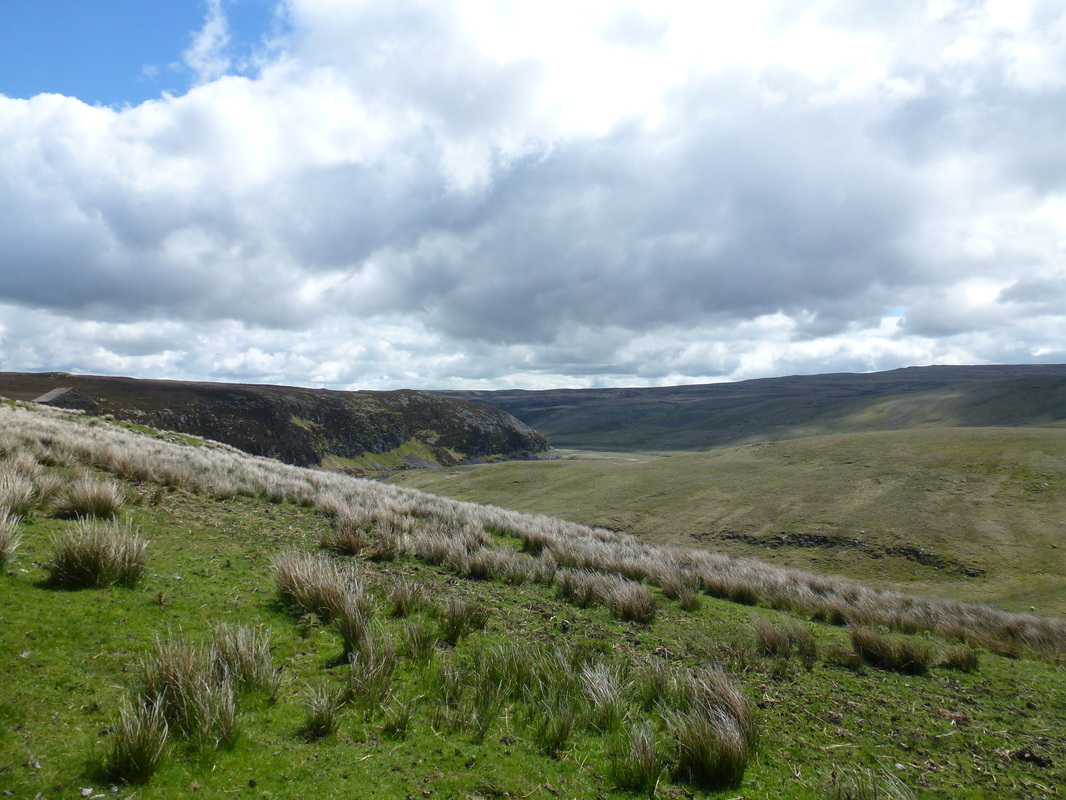 Looking back down to the Tees near Cauldron Snout 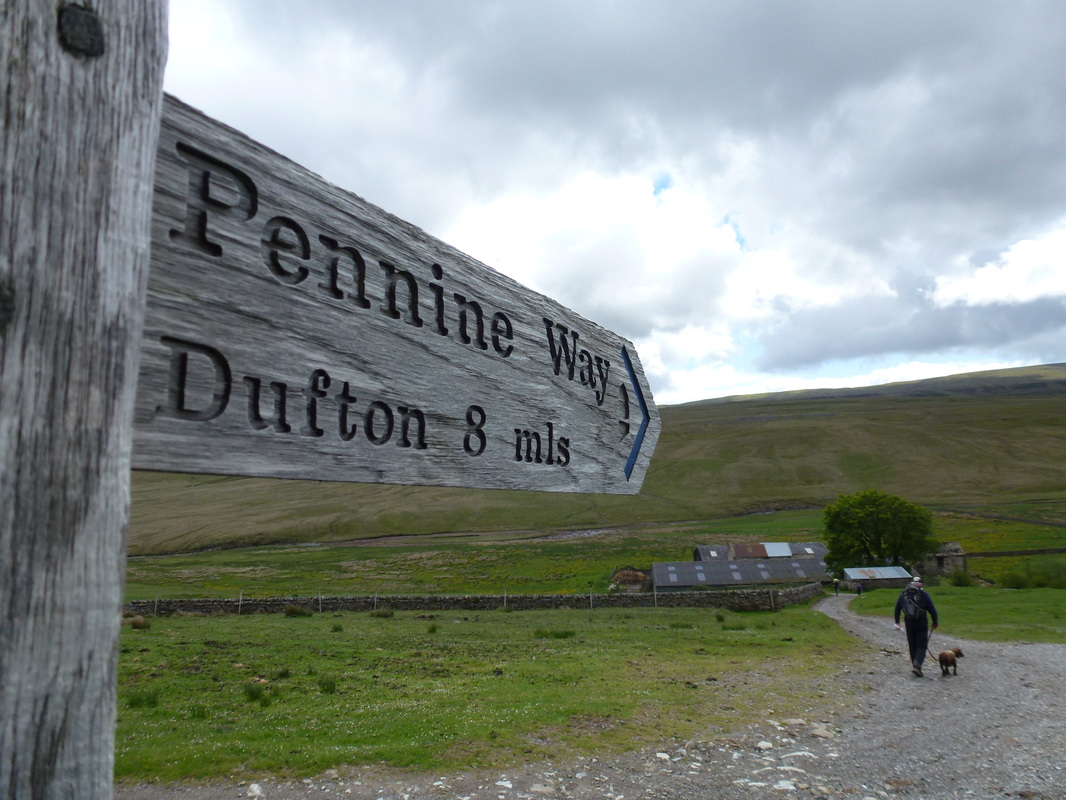 Nearing Birkdale Farm - the guy ahead of Dave was carrying the largest backpack known to man
From Birkdale Farm the route followed the general direction of Maize Beck along a good track which whilst welcome, was hard work on the legs - oh how we longed for the softness of bog & grass and it is safe to say this was a long old slog! The track eventually dropped down to the relatively new bridge over Maize Beck from where there is a choice of 2 routes. It is much better to take the route over the bridge as the path is more defined with the northern route unclear and rough. On the southern side of the beck we were back on the soft stuff and it was a pleasant transit to reach the sudden amazing sight that is High Cup, a huge U-shaped glaciated valley that is a perfect example of glacial erosion. The sides of the valley are peppered with strata and dolerite which is interspersed with scree as Maize Beck trickles down. Leaving High Cup, we continued along the edge of the bowl to pass Nichol's Chair to join a good path known as Narrow Gate.​ 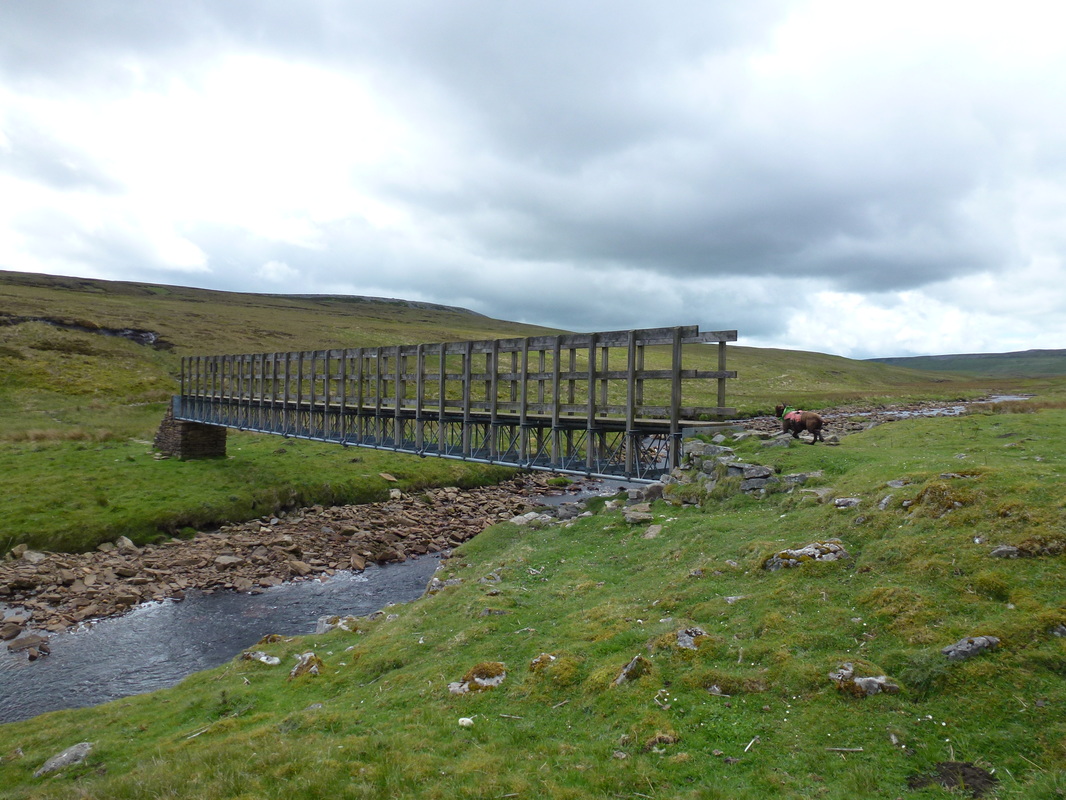 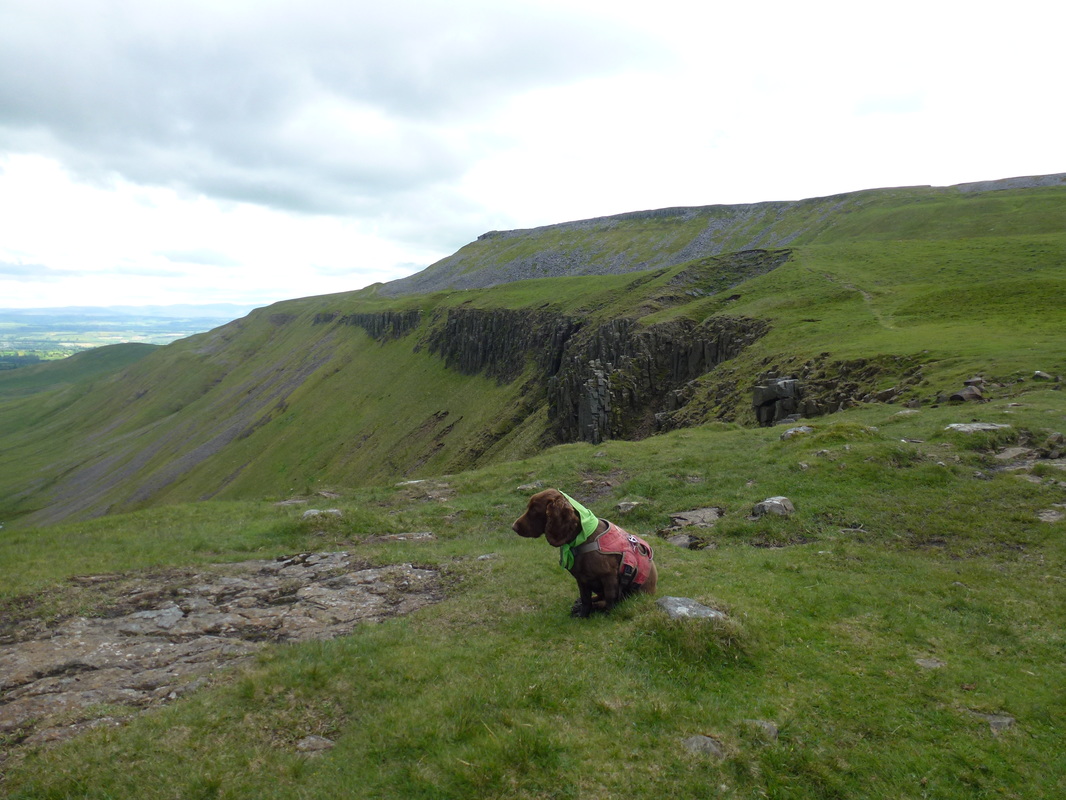 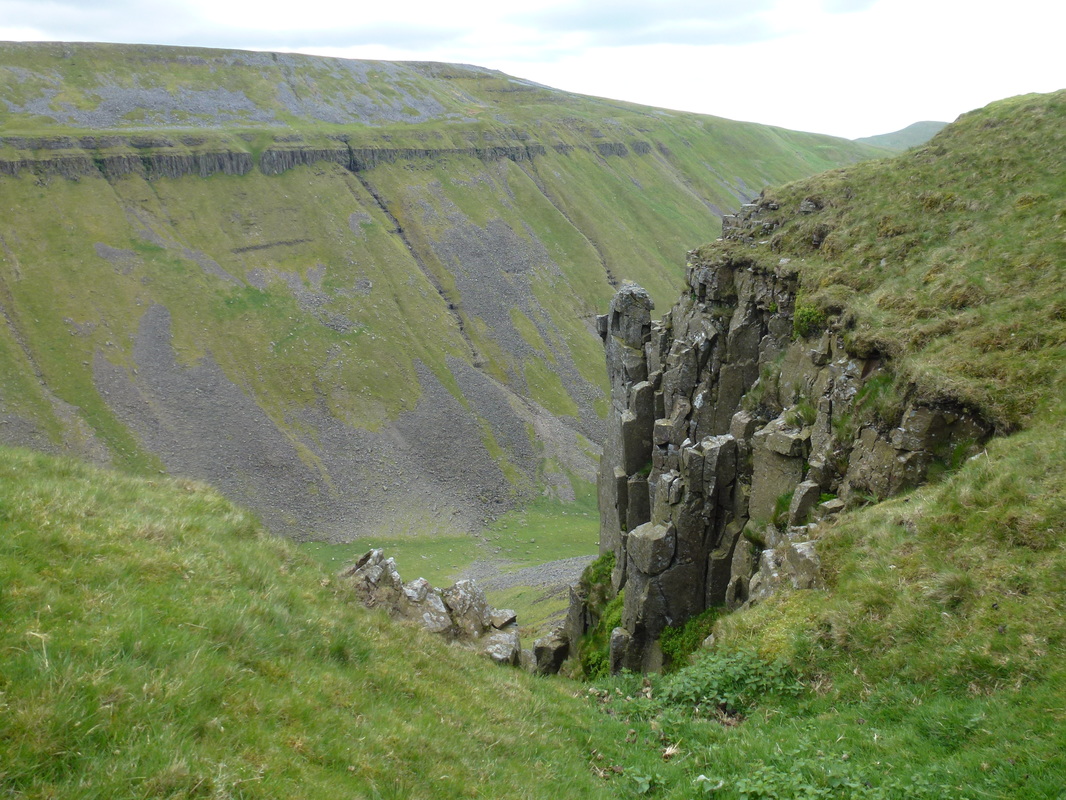 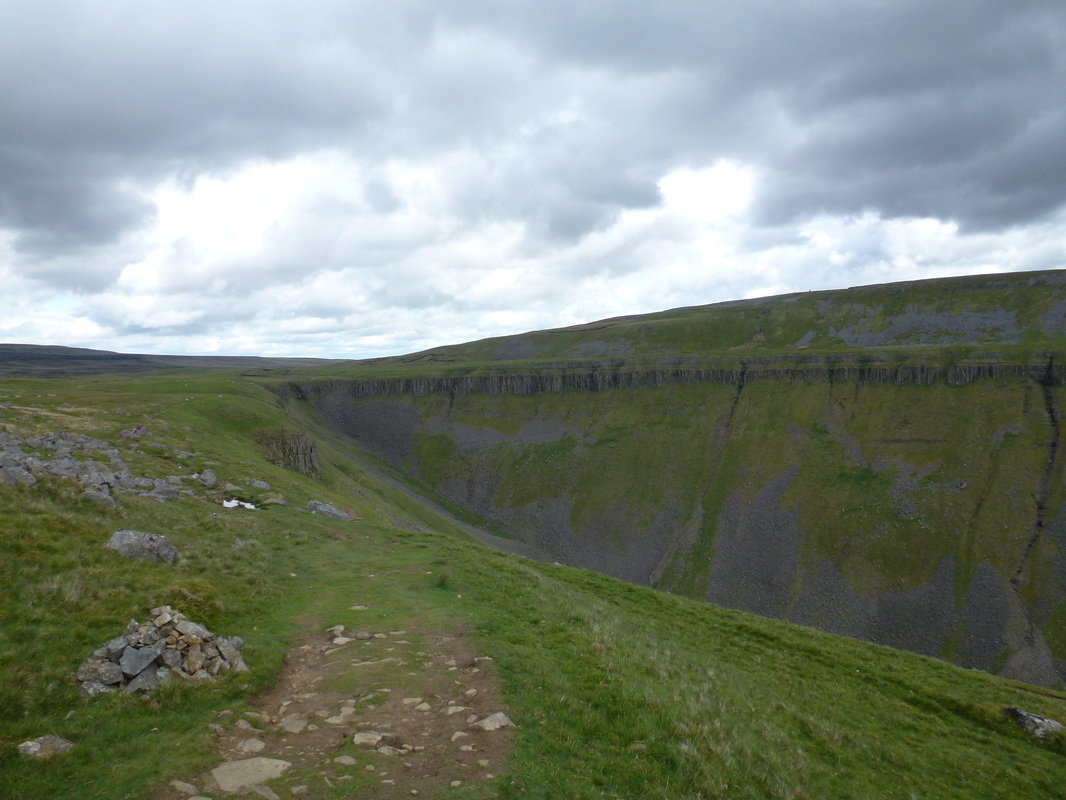 Looking back to High Cup
It was only now after almost 2 weeks walking that both of us were starting to feel fatigue in our legs and we were looking forward to getting to Dufton. The route continued to drop gradually to reach a metal kissing gate and a walled lane which soon turned into a welcome tarmac surface. Turning right at Brow Farm it was now a simple walk along the road to finally reach the village green and a welcome drink in The Stag Inn. We called our B&B in Appleby and the proprietor John duly arrived to give is a lift over to our digs for the night.  ​ 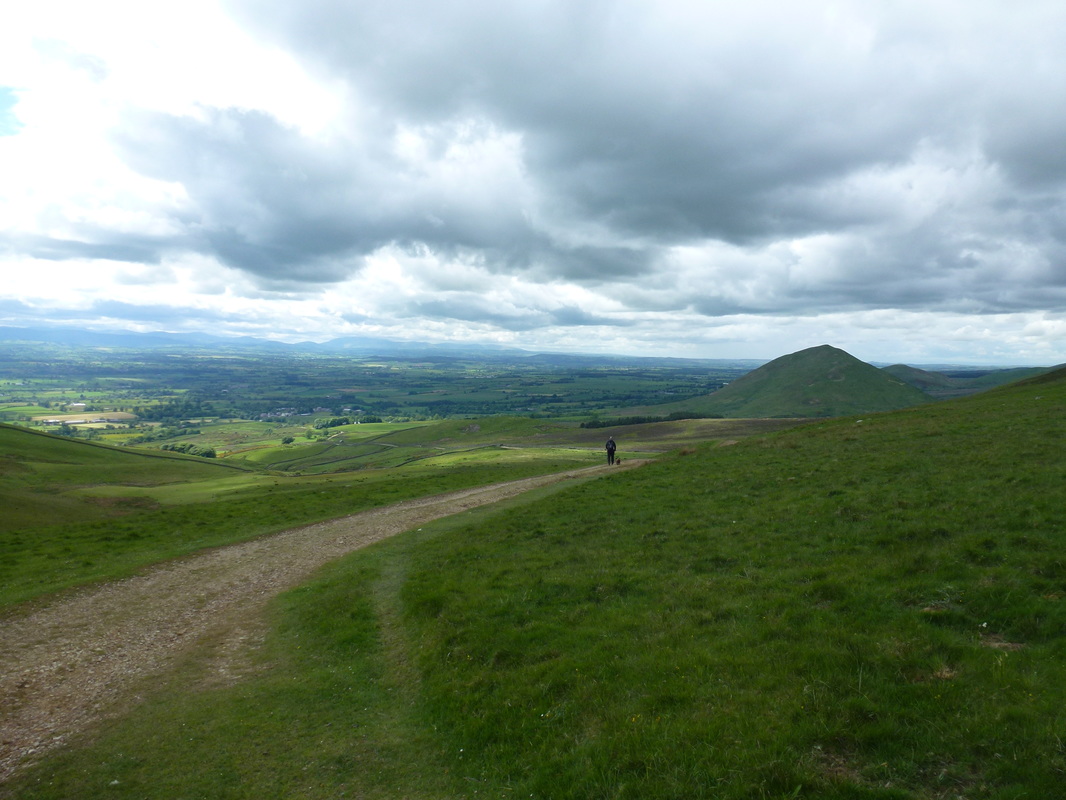 The long walk in to Dufton - Dufton Pike is to the right, thankfully we were not required to climb it! 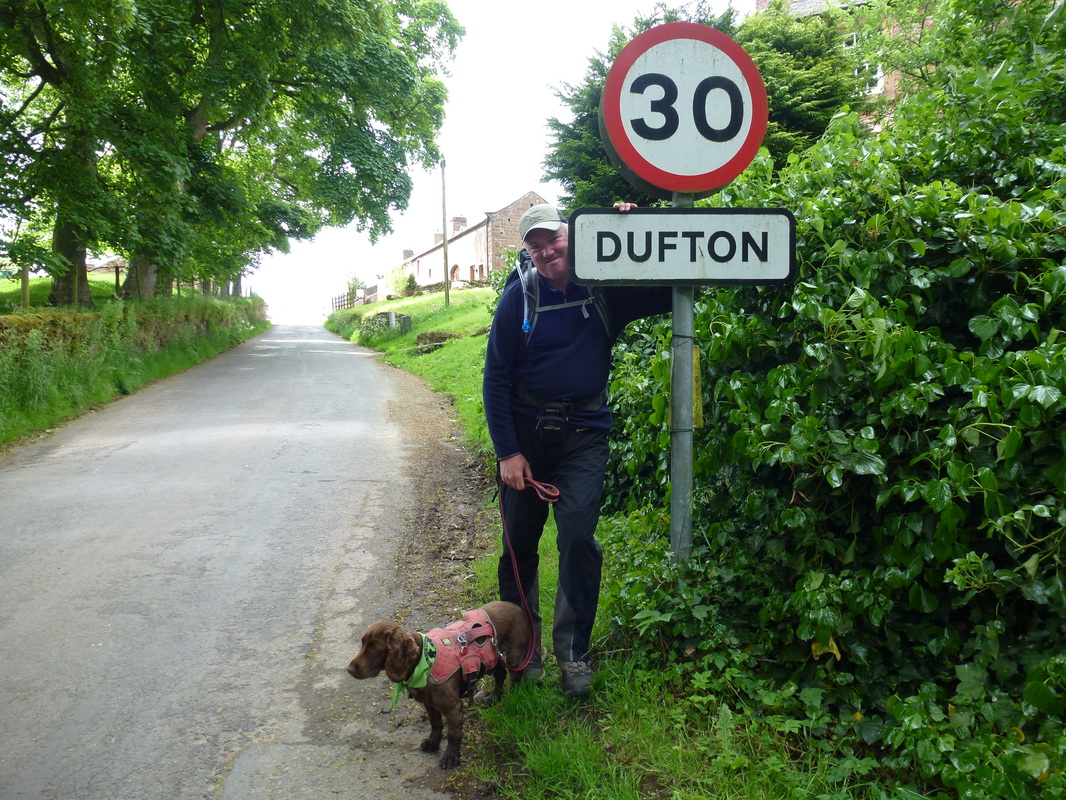 This was a long day but a fantastic walk 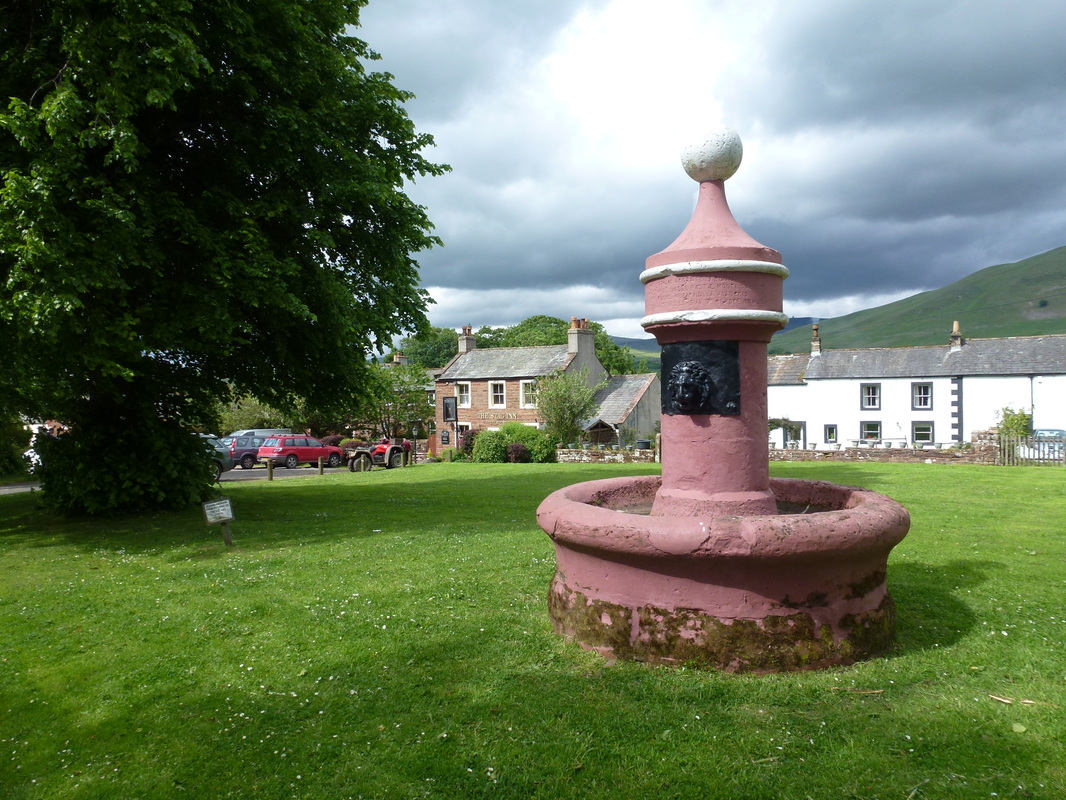 The Village Green in Dufton 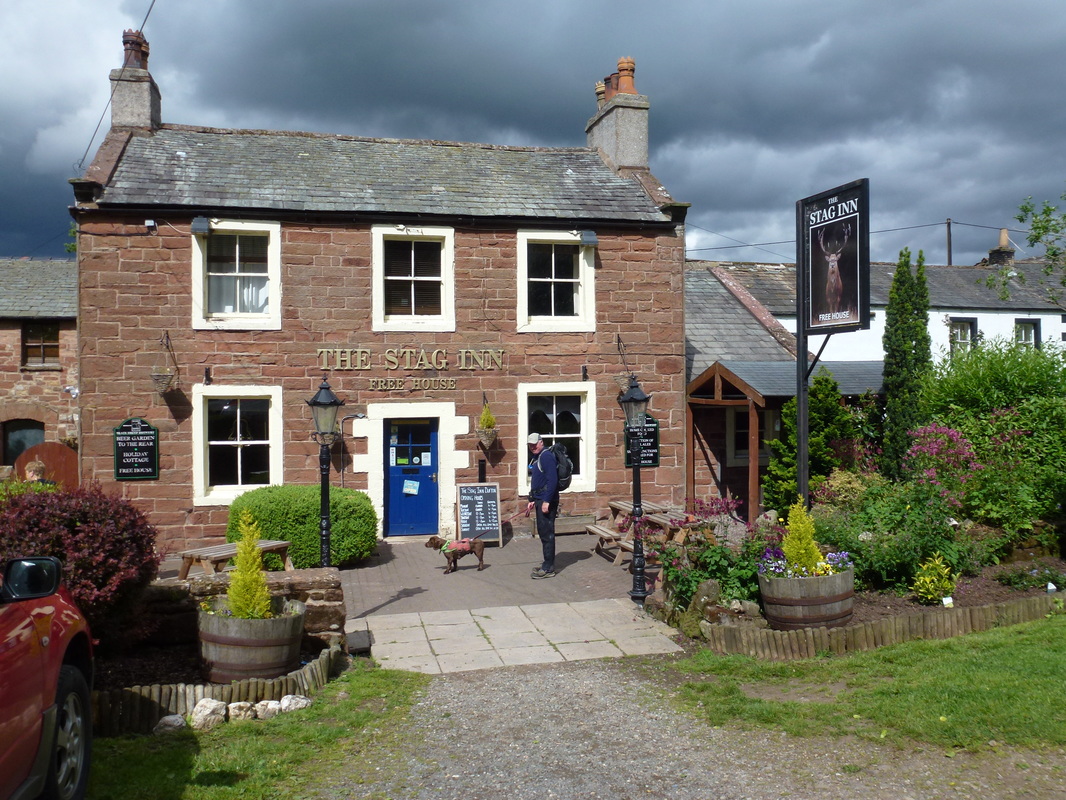 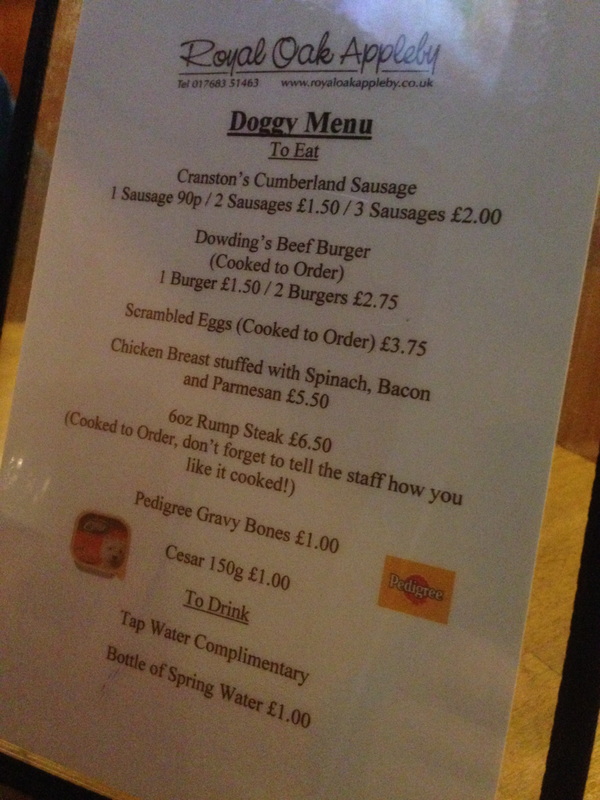 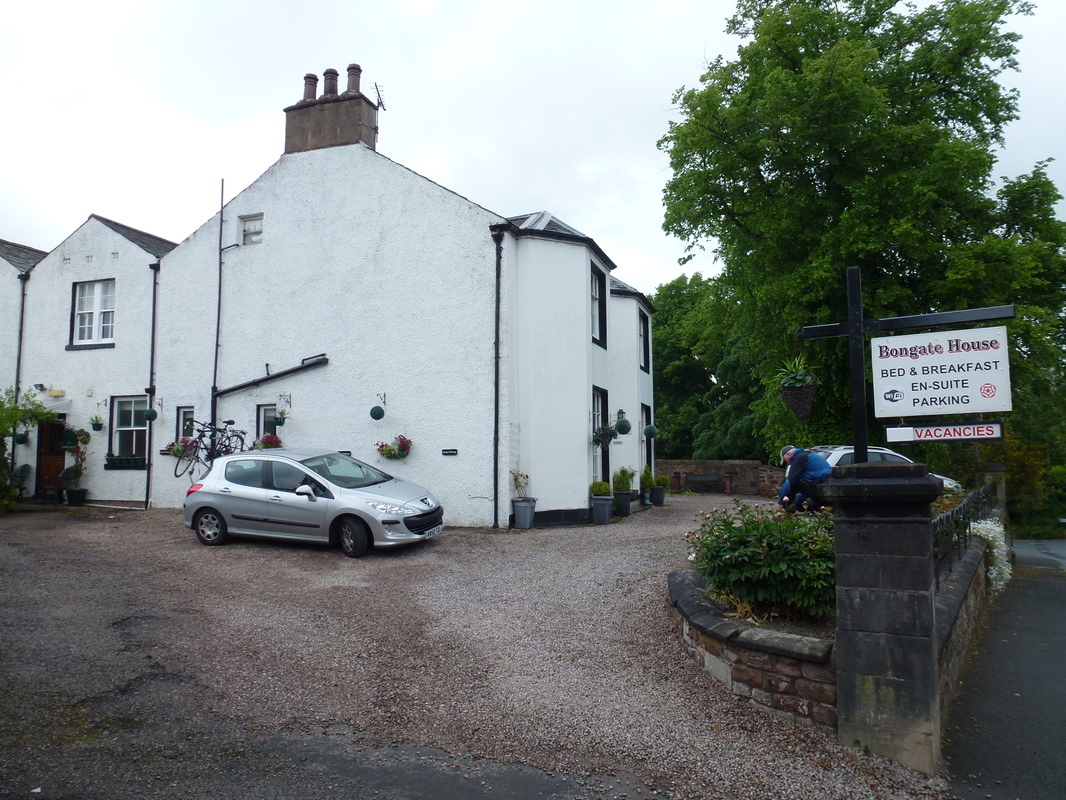 There was no dog friendly accommodation in Dufton therefore we booked a night at Bongate House in Appleby. For a small fee John promptly collected us and dropped us off back in Dufton the following morning. A very nice B&B, our room was huge and immaculate. Our evening meal was taken just down the road in a very good pub - The Royal Oak in Appleby which served excellent food.    ​
Day 13 Data
​© Copyright Dave Walsh 2013 - 2022 All Rights Reserved