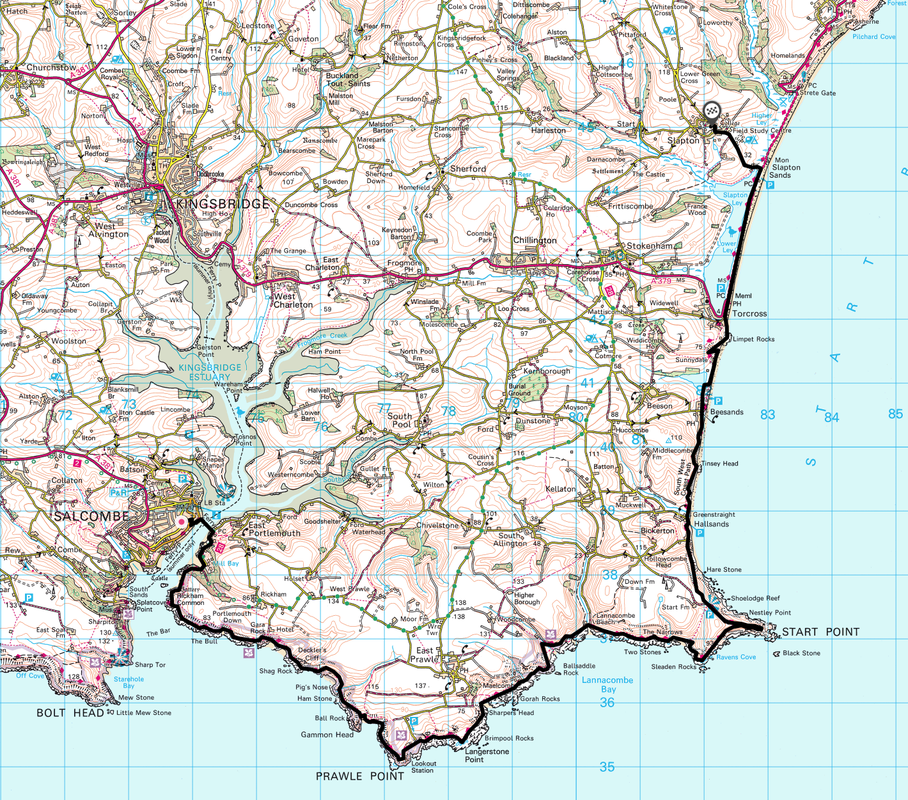 Despite our reservations the Waverley B&B was very pleasant - we are not that keen on 'communal' breakfast tables but this one was fine as the other guests were chatty & amenable. At nearly 17 miles we were in for a long old day today and the weather was overcast as we caught the ferry to East Portlemouth. On leaving the jetty the path passed to the side of some posh houses and one of the occupants, an elderly lady waved a dog poo bag in our faces and said "Bloody Foreigners" - strange! Near Gara Rock the weather improved and the sun shone for the rest of the day. The scenery in and around Brimpool Rocks was glorious and what better place to sit and have lunch.

The terrain from Maelcombe House to Ballsaddle Rock (ooh err Missus) was very rocky and we had to take extreme care on this section. Just before Start Point we saw yet another Seal swimming on his back, clearly enjoying the sun. Reaching Start Point the path does not go to the Lighthouse but we made the journey over the delightful ridge to see it. At Hallsands we had to divert slightly because some cows were blocking the exit. We made use of the excellent Cricket Inn at Beesands and spent an hour sat outside in the shade doing some quality control on their excellent Cider.

​Leaving the pub it was very warm and on the beach near Limpet Rocks we chatted to a chap who asked us what we were up to - he shook our hands in disbelief when we told him we were walking the entire SWCP in one go. From Torcross it is a really nice amble along Slapton Ley before we left the path to make our way to the B&B in the village of Slapton. It was whilst we were walking through the village that we were recognised again - this time by Vicki and her Working Cocker Spaniel called Xander. Arrived at Tower Inn via a nice hill and checked in - lovely evening meal in the pub.​ 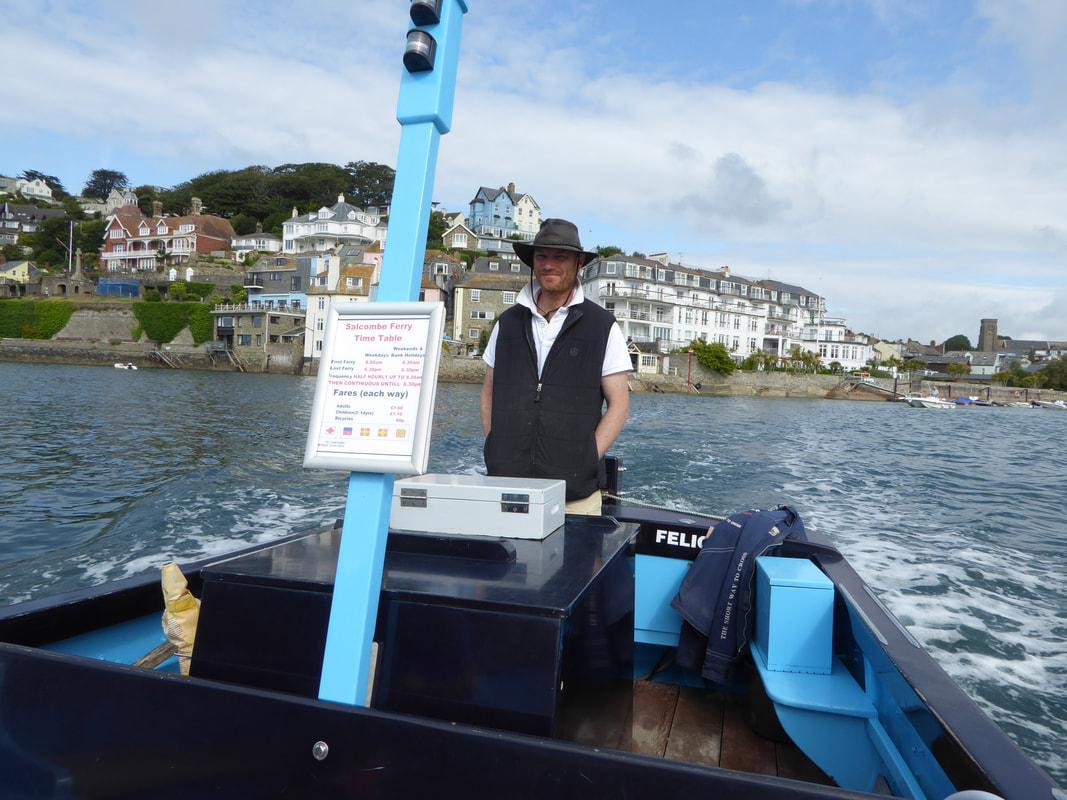 ​Our ferry chap from Salcombe 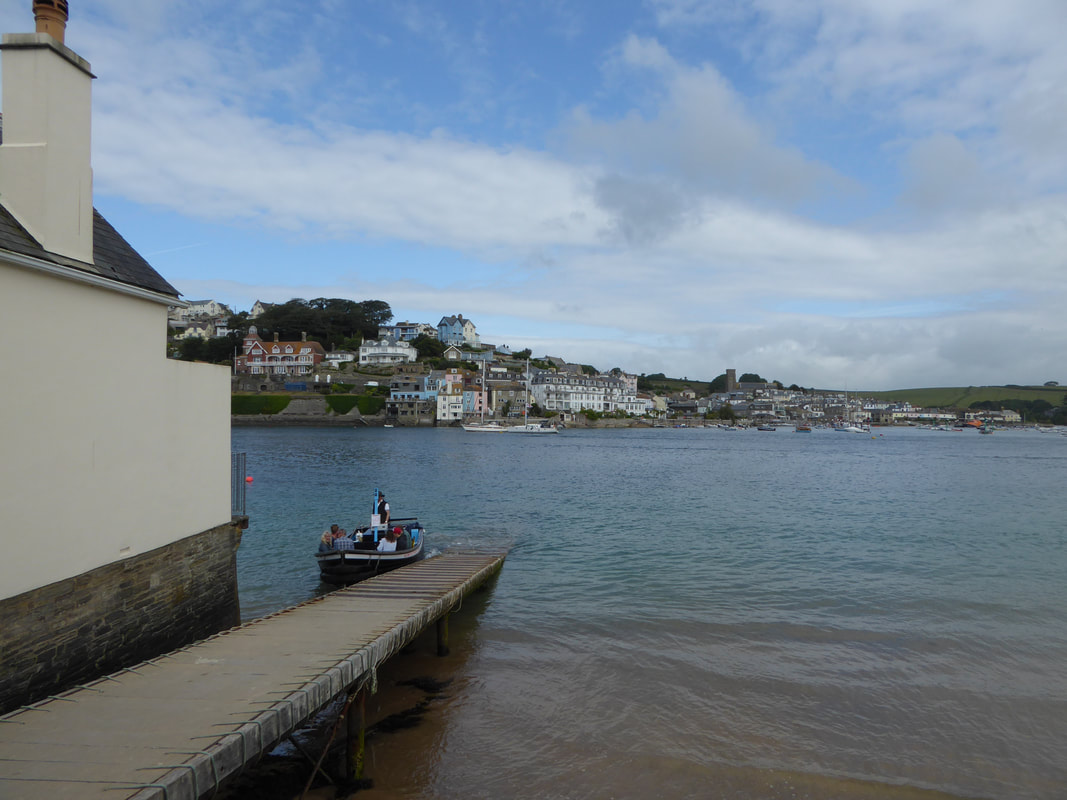 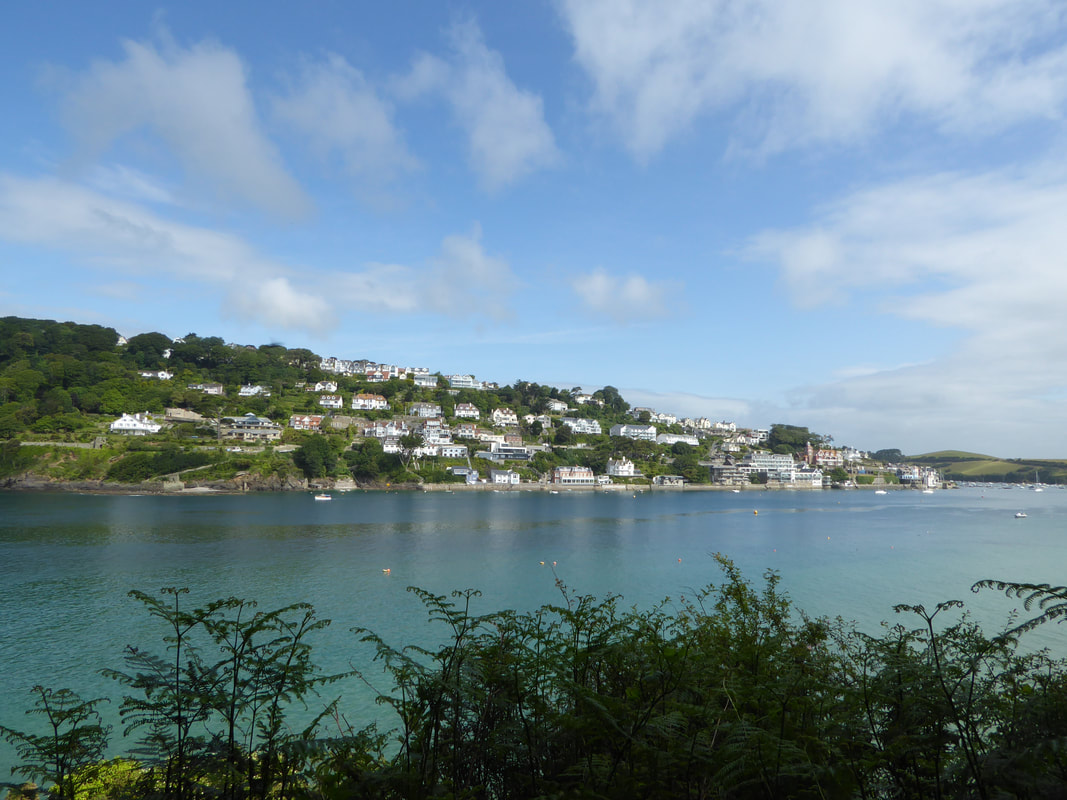 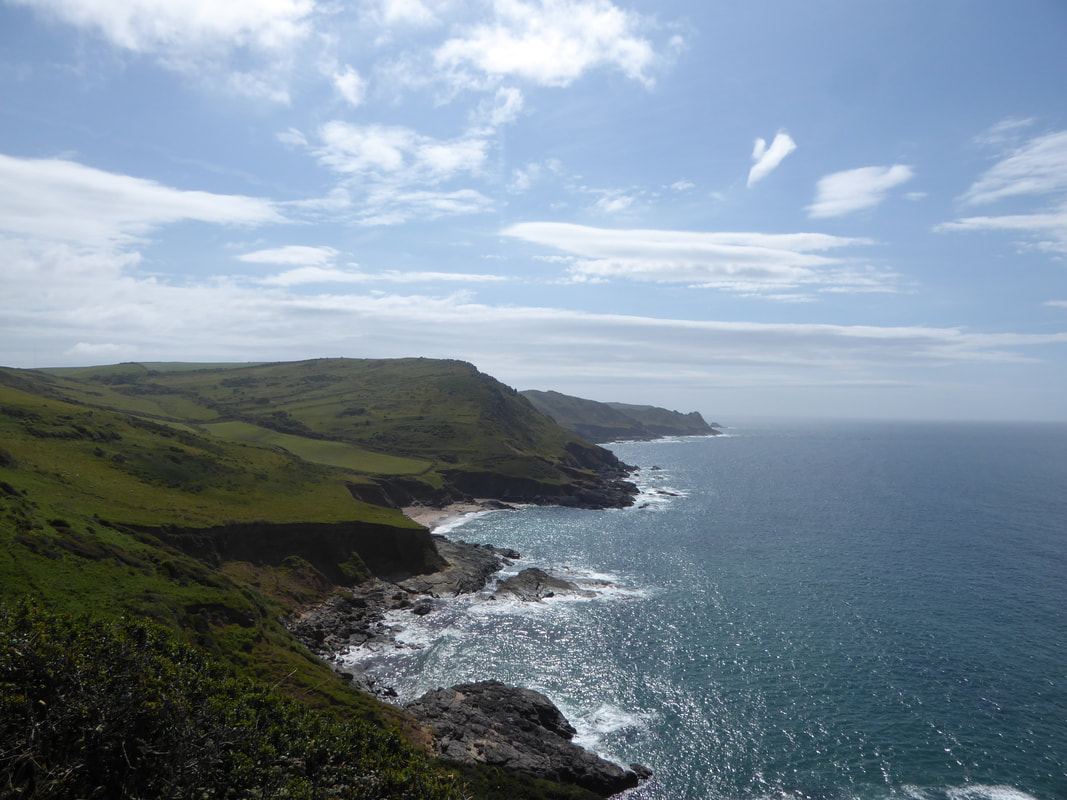 Deckler's Cliff with Gammon Head in the distance 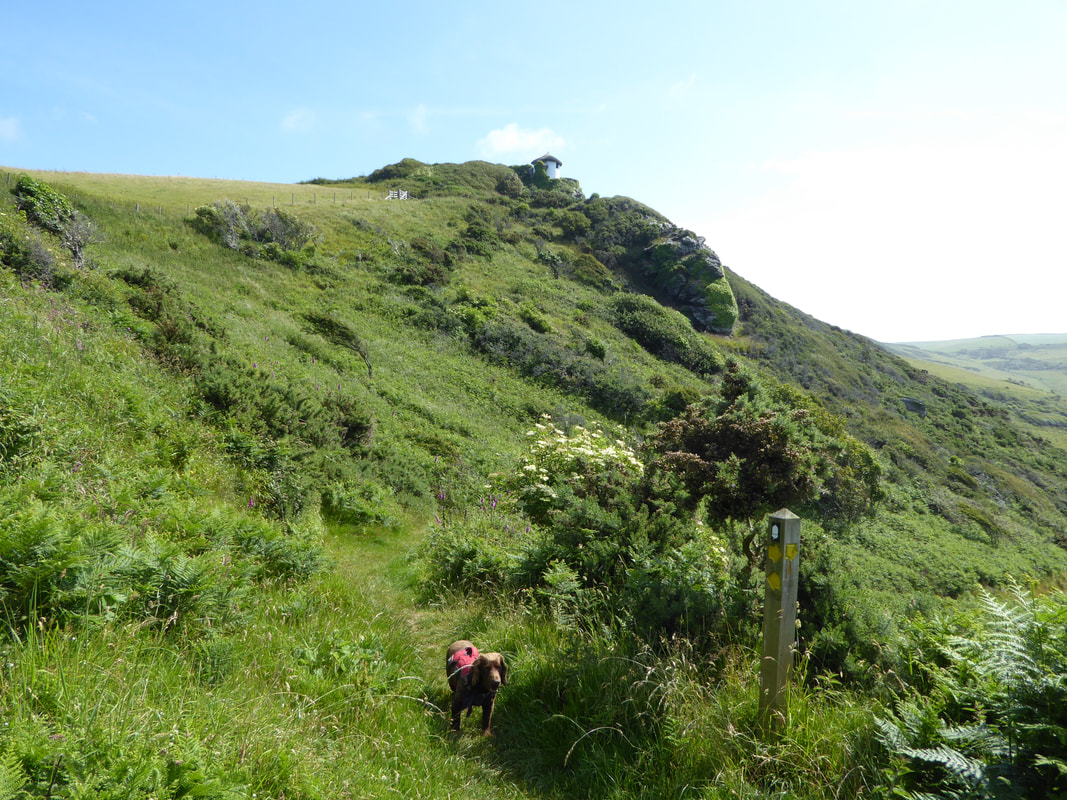 Gara Rock and the lookout 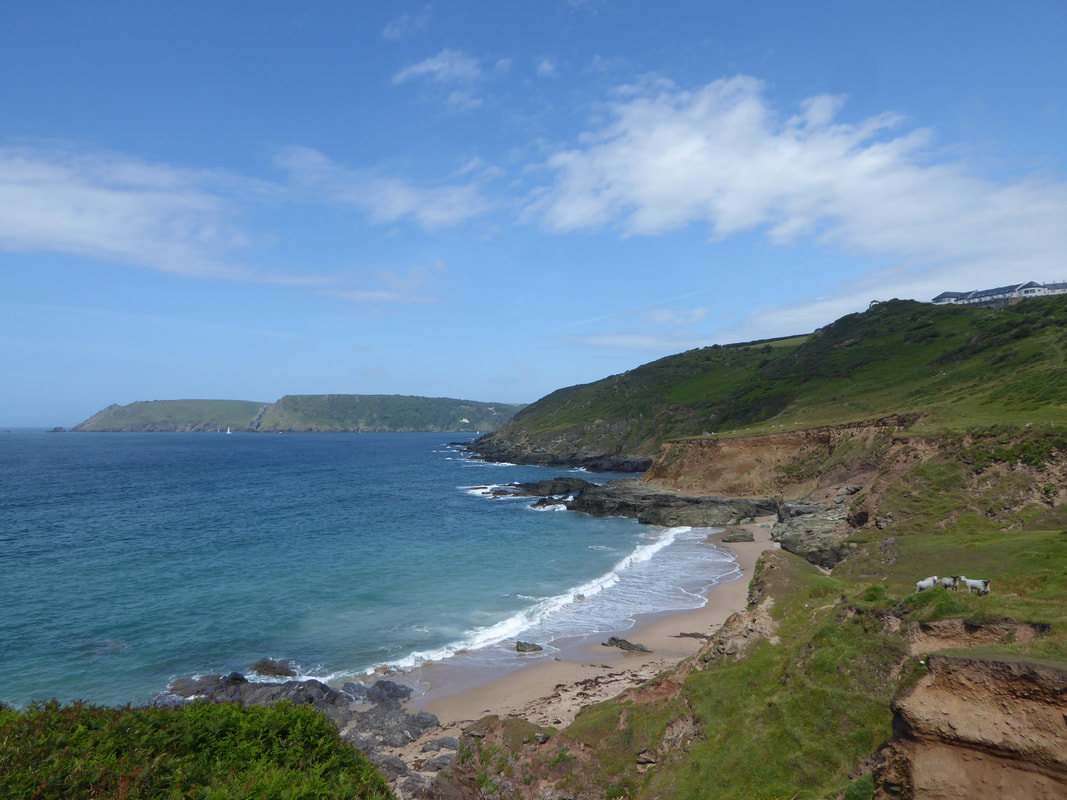 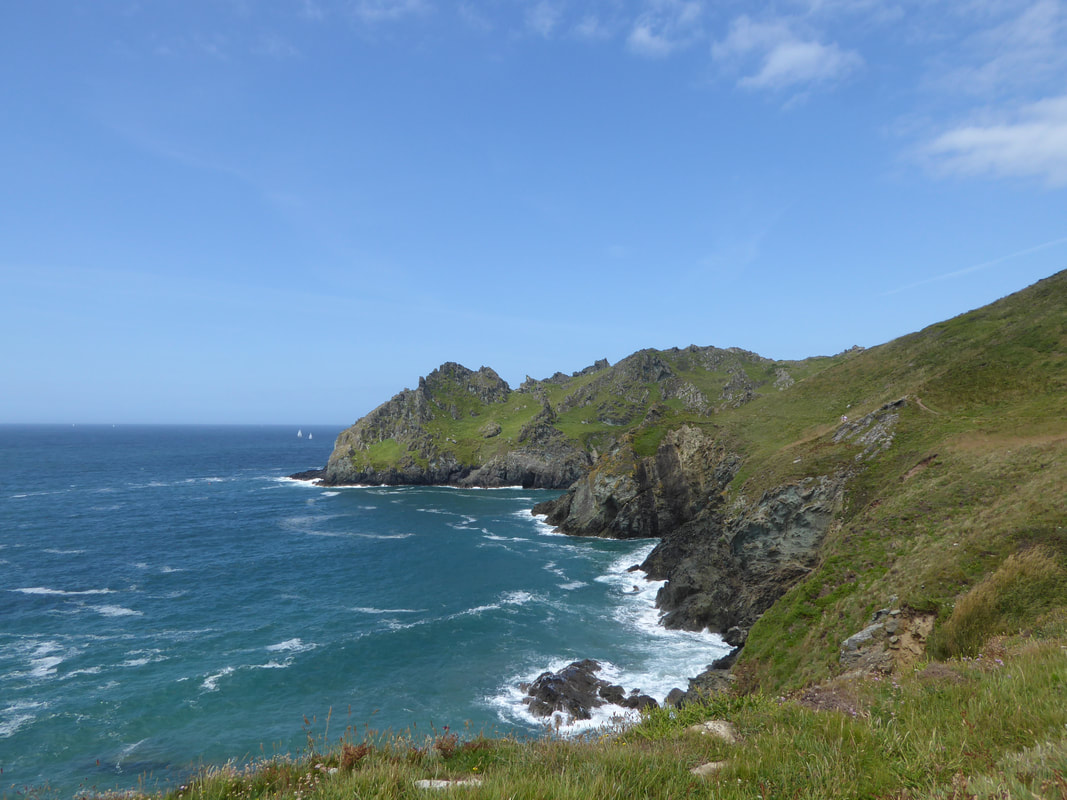 Looking back to Gammon Head from above Elender Cove 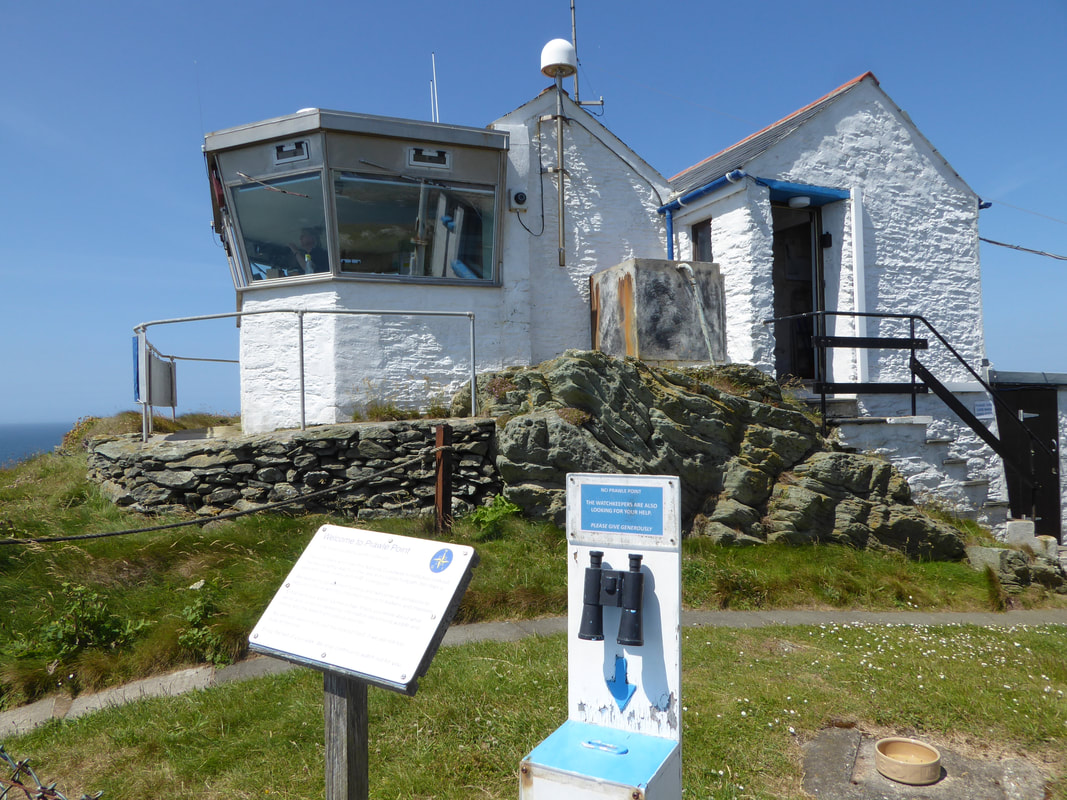 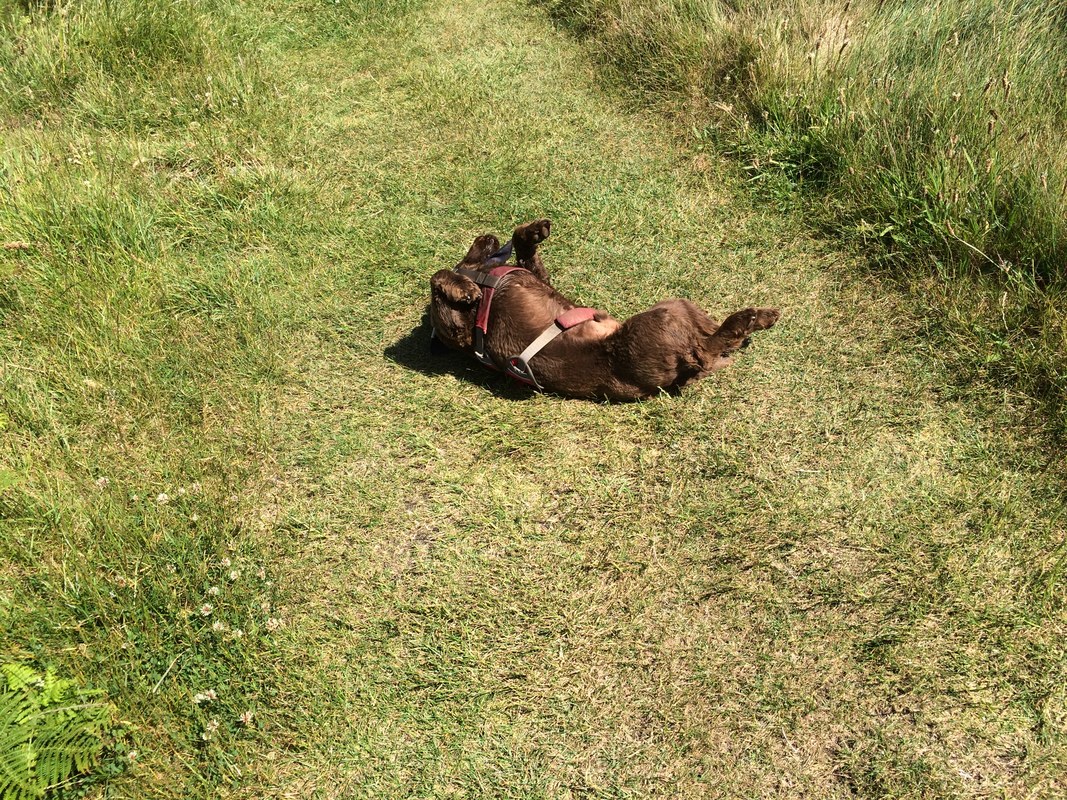 ​Muck about time for Fudge at Prawle Point 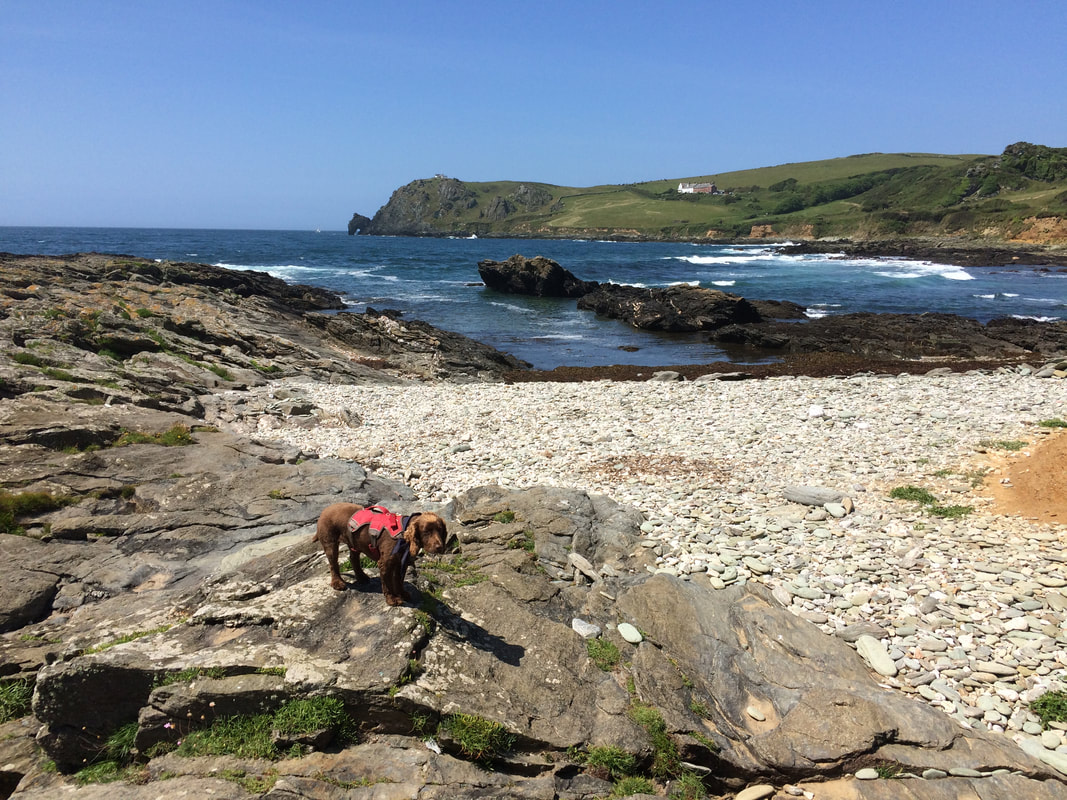 The lovely Brimpool Rocks looking back to Prawle Point 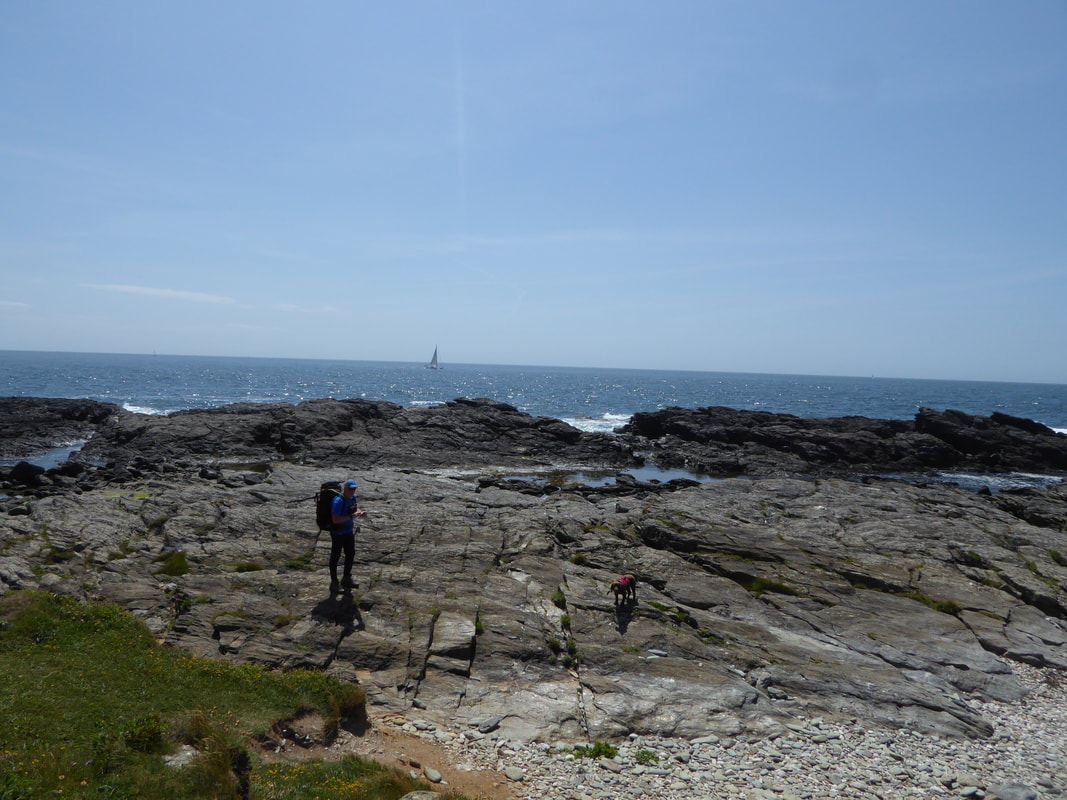 We had a lovely stop here for lunch at Brimpool Rocks 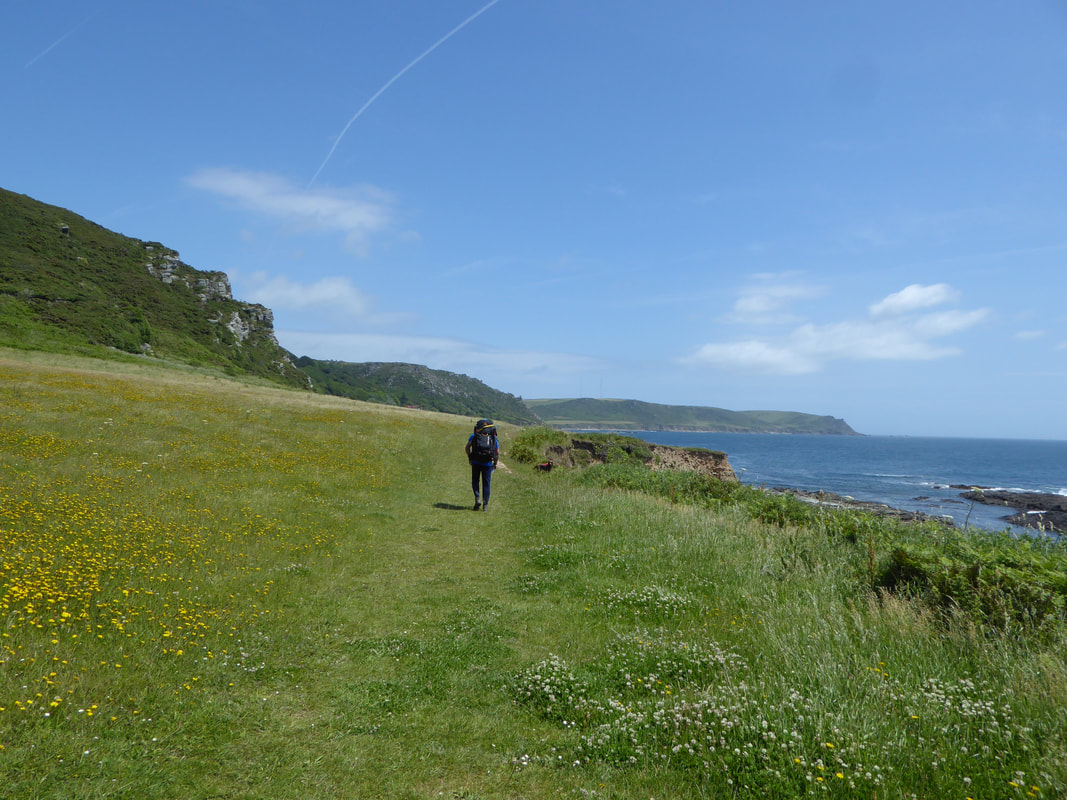 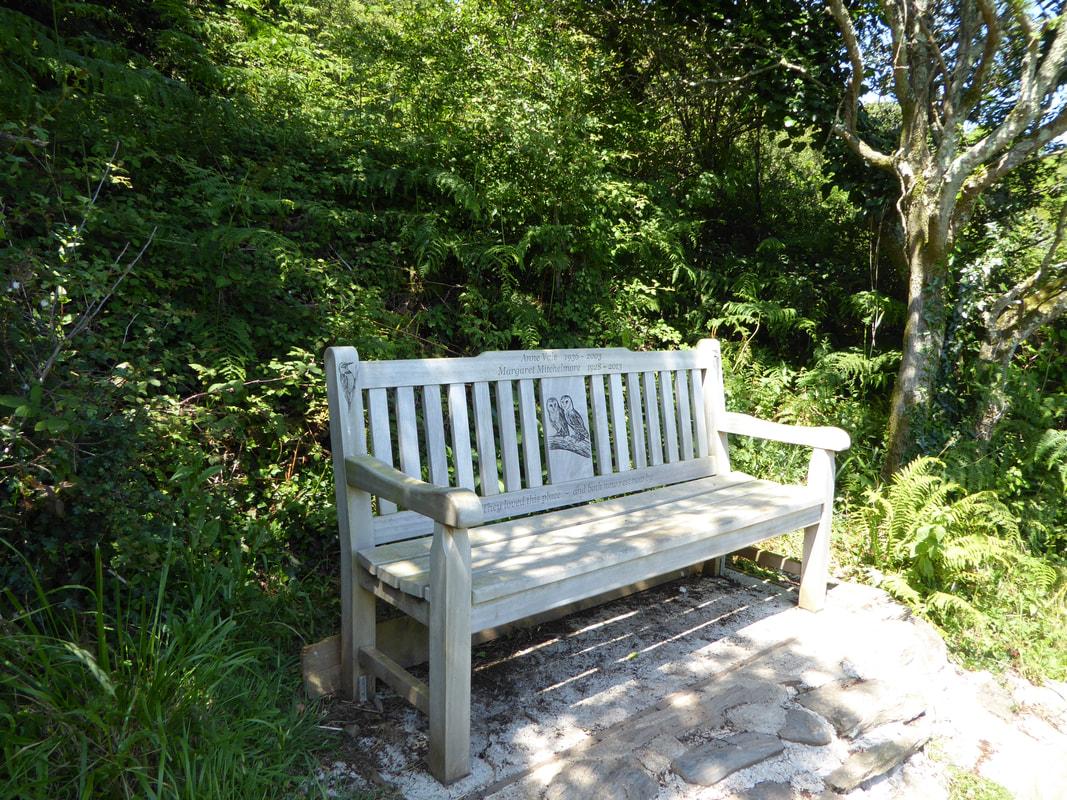 Another welcome seat near Lannacombe 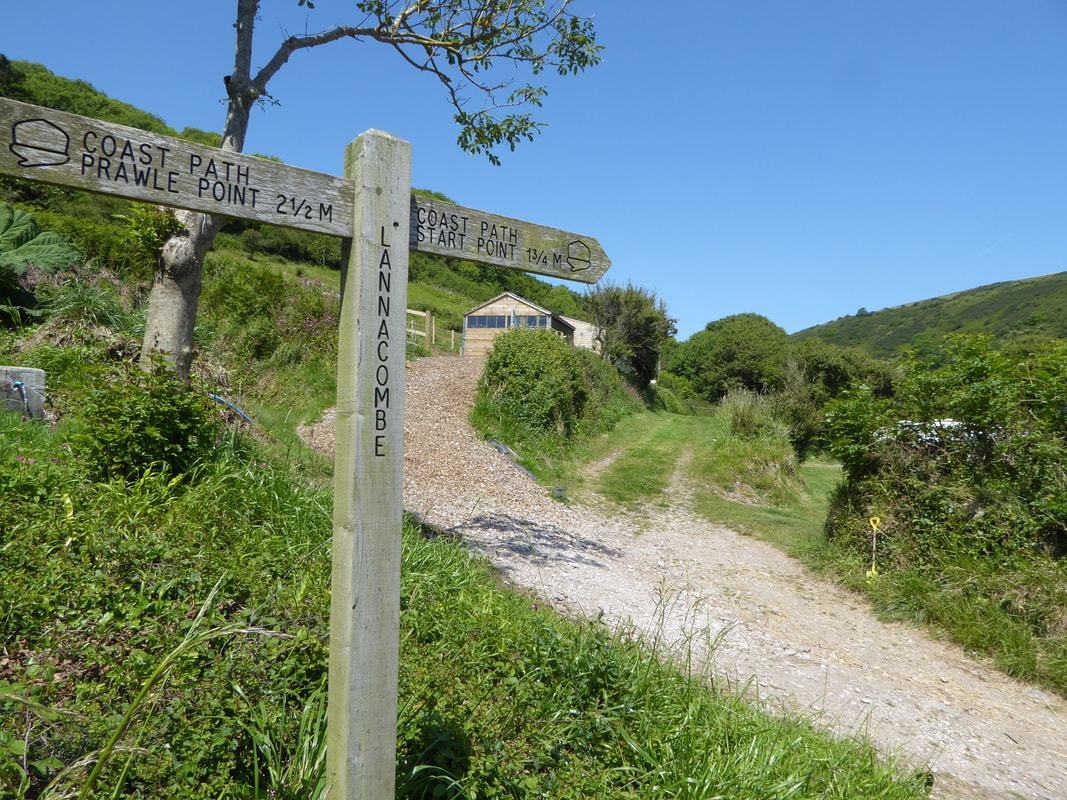 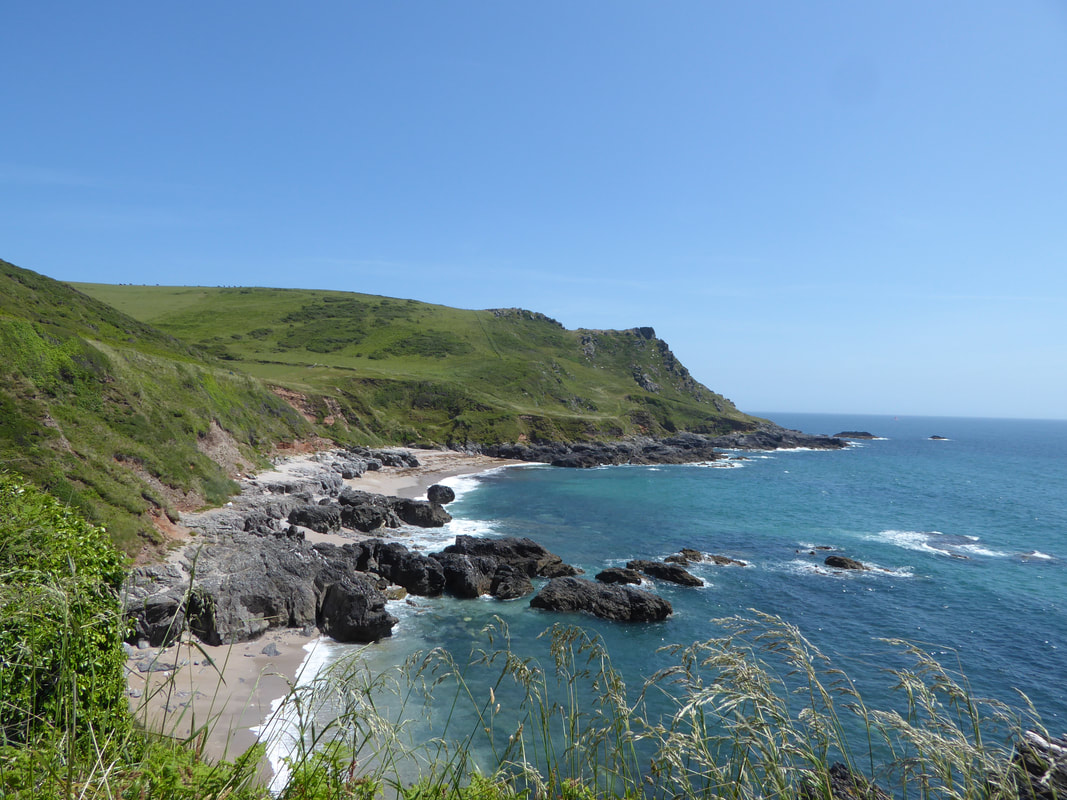 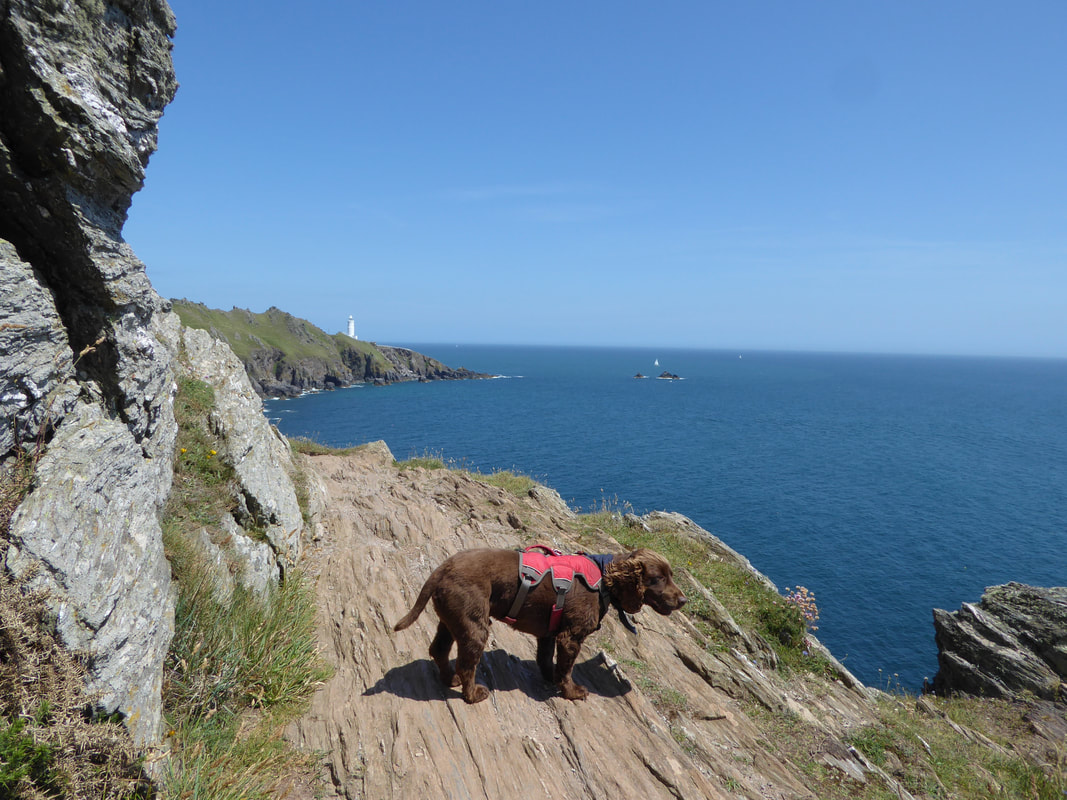 A thirsty Fudge at Great Sleadon Rock.  Start Point is now in view ahead. 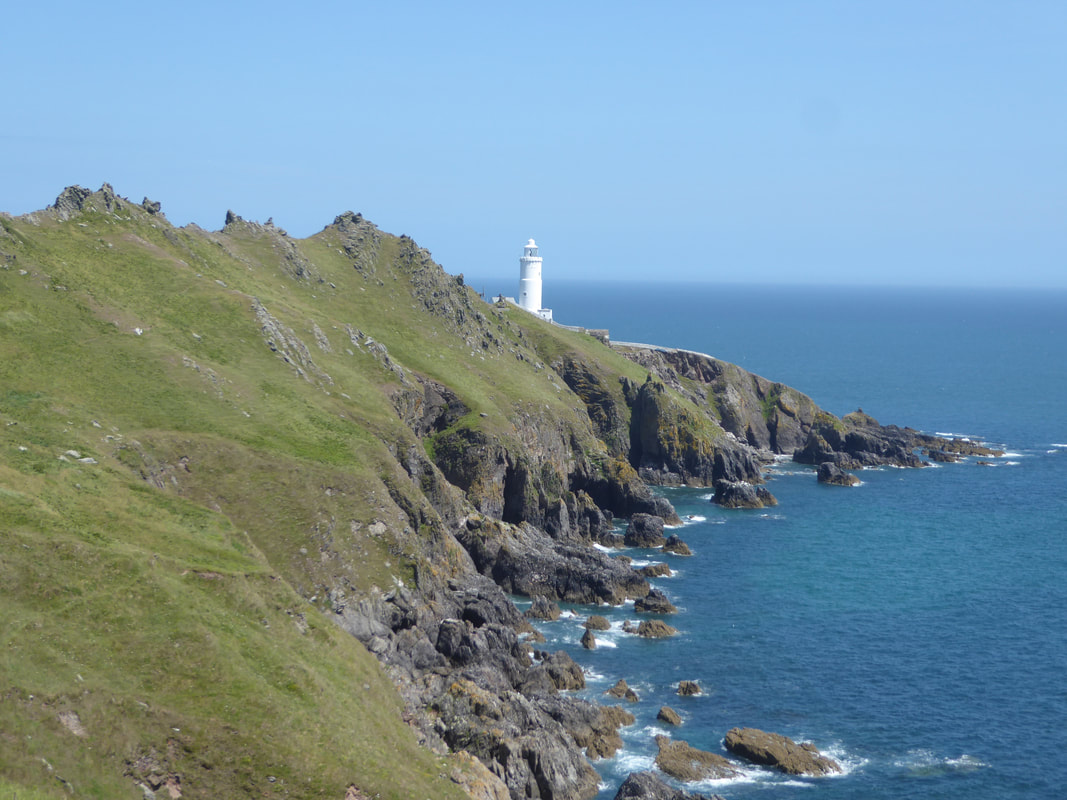 Start Point and the Lighthouse - the path heads to the left here and does not go to the Lighthouse.
​However, the rocky ridge scramble seen ahead was too good to miss therefore we made the journey over to it. 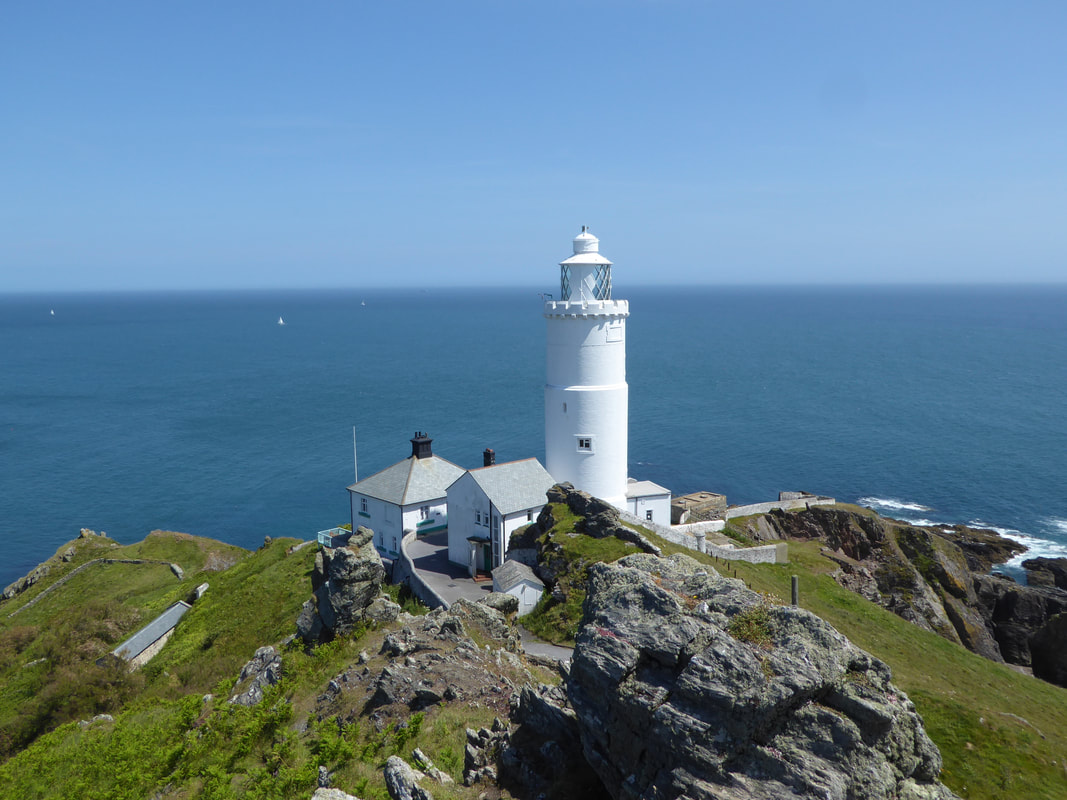 ​Start Point Lighthouse from the end of the rocky scramble 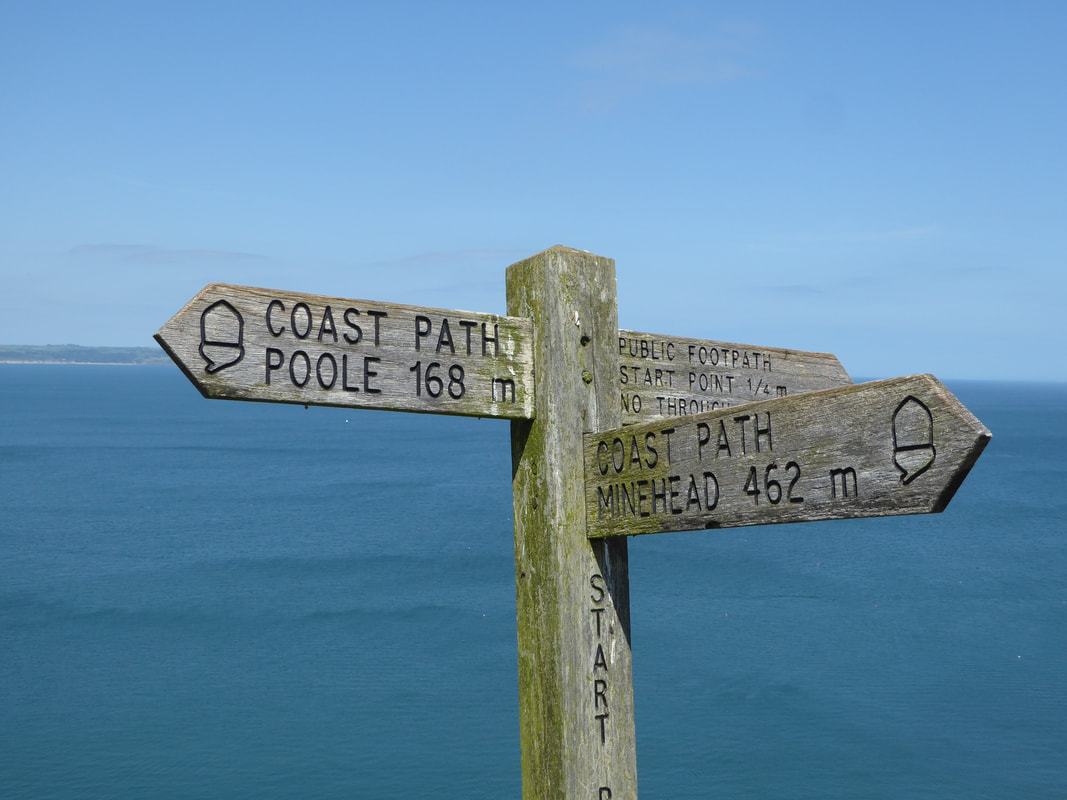 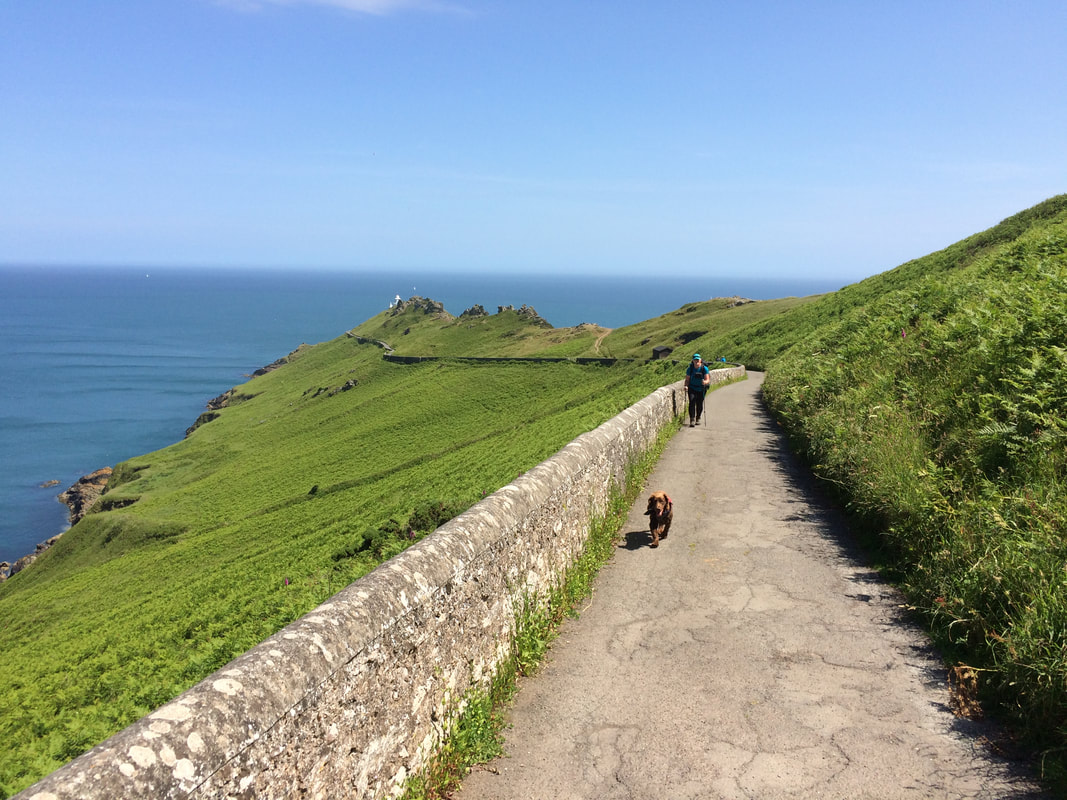 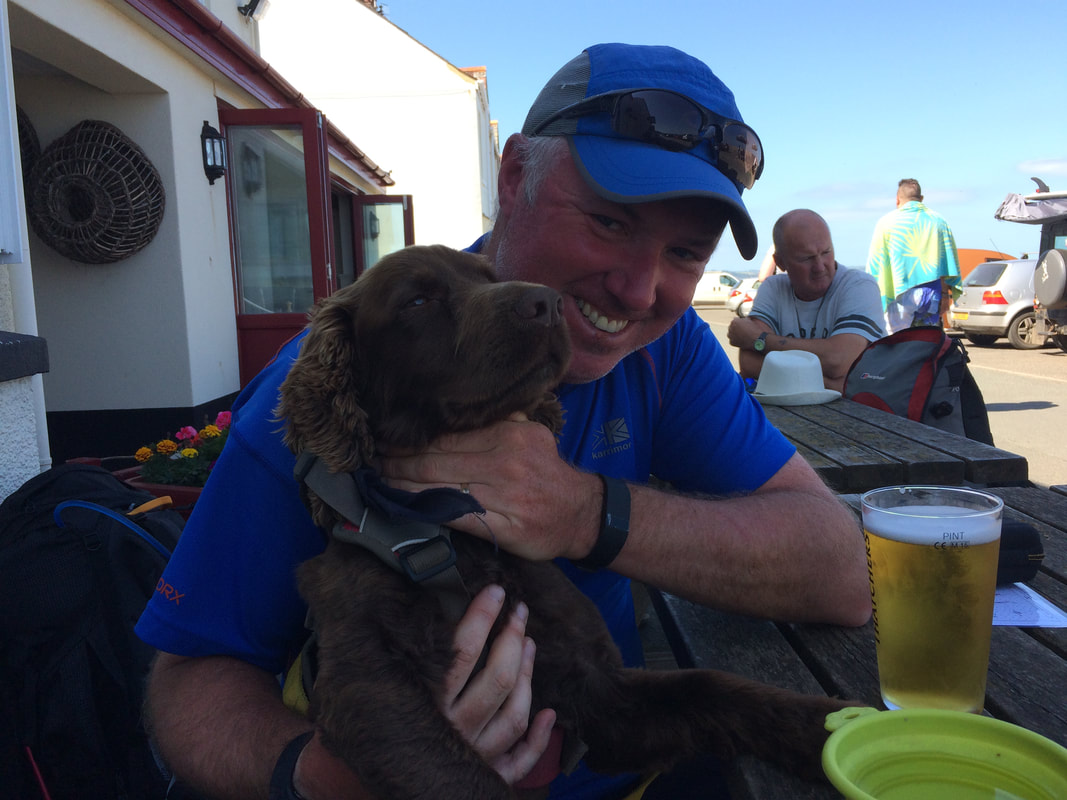 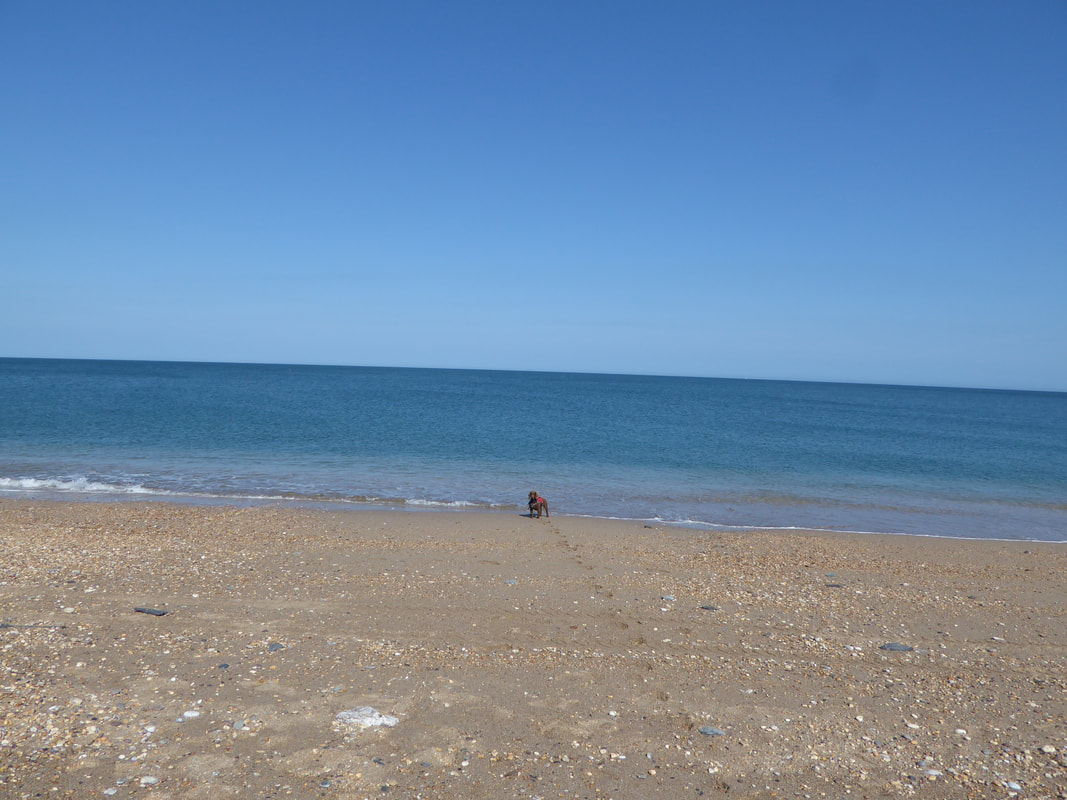 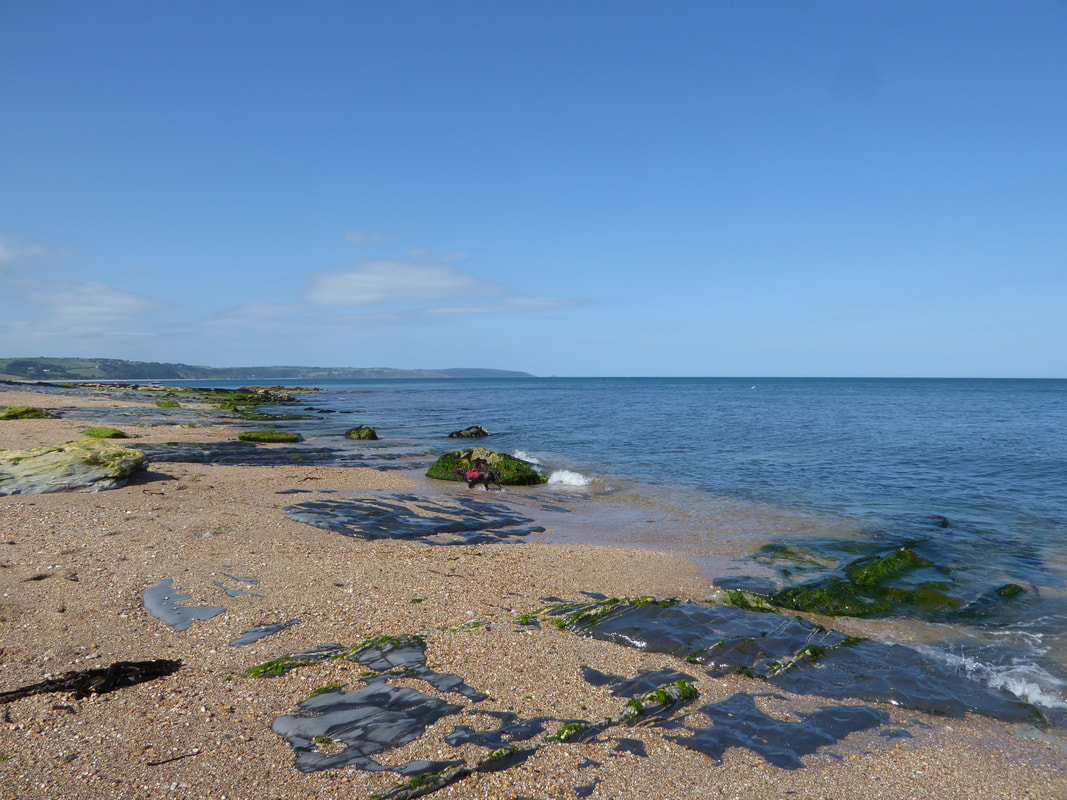 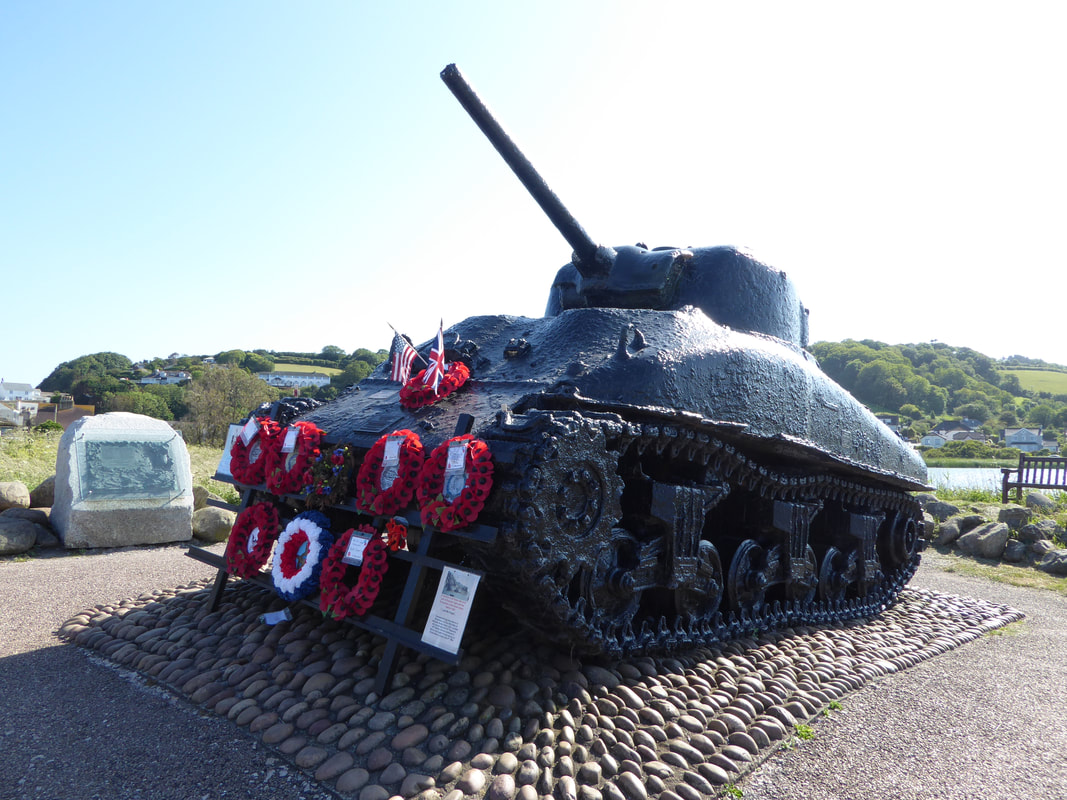 The Exercise Tiger Memorial at Torcross

On the afternoon of April 27, 1944,  thousands of men began boarding Eight LSTs (Landing Ship Tanks) at Plymouth, Brixham and Southampton.  They were about to embark on a full dress rehearsal for D-Day (Codename Exercise Tiger) on the beach at Slapton Sands -  chosen because of its similarity to Utah Beach, the D-Day assignment for this convoy.  The ships arrived at approximately 0200 on April 28th in Lyme Bay and formed one long convoy as they began the journey back to Slapton Sands.  Suddenly, four German E-Boats, on a routine patrol, armed with torpedoes approached the convoy and began firing on the ships.  General Quarters was sounded on all the ships, but the LSTs had little fire power and protection against these fast moving boats.  Initially, the torpedoes missed hitting the LSTs because of their flat-bottom hulls.  Survivors from the tank decks recounted stories of hearing the torpedoes scraping the bottom of the hull.  Gun fire was exchanged between the E-Boats and the LSTs. The E-Boats quickly made adjustments and LST 507, at the back of the convoy, took a direct hit and was in flames and sinking.  LST 531, in the middle of the convoy, then took direct hits from two torpedoes.  She would sink within six minutes.  LST 289, in front of LST 507, was the third and final ship that was hit with a torpedo.  LST 289 did not sink but took extensive damage to the stern and suffered the loss of life of 13 men and many were injured. The LSTs remaining afloat followed orders and moved out in a zig zagging  pattern as they began making their way to the nearest port.  The E-Boats had left the scene.   Captain John Doyle, of LST 515, the lead ship of the convoy, disobeyed orders and returned to rescue survivors from the sea.  His crew rescued approximately 134 men that would have surely perished.  They remained until the British ship, HMS Onslow, arrived at dawn to assist in rescuing men and retrieving those who died.  Approximately 639 soldiers and sailors lost their lives.  The waters were freezing and hypothermia quickly set in.  Soldiers carrying their heavy gear in backpacks did not receive instructions on the proper use of their life preservers and drowned. There were not enough life boats and the surface of the water was in flames from the burning fuel.   Those that survived were taken to various established and temporary hospitals.  They were told never to speak of what happened under threat of court martial because of the secrecy required for D-Day. 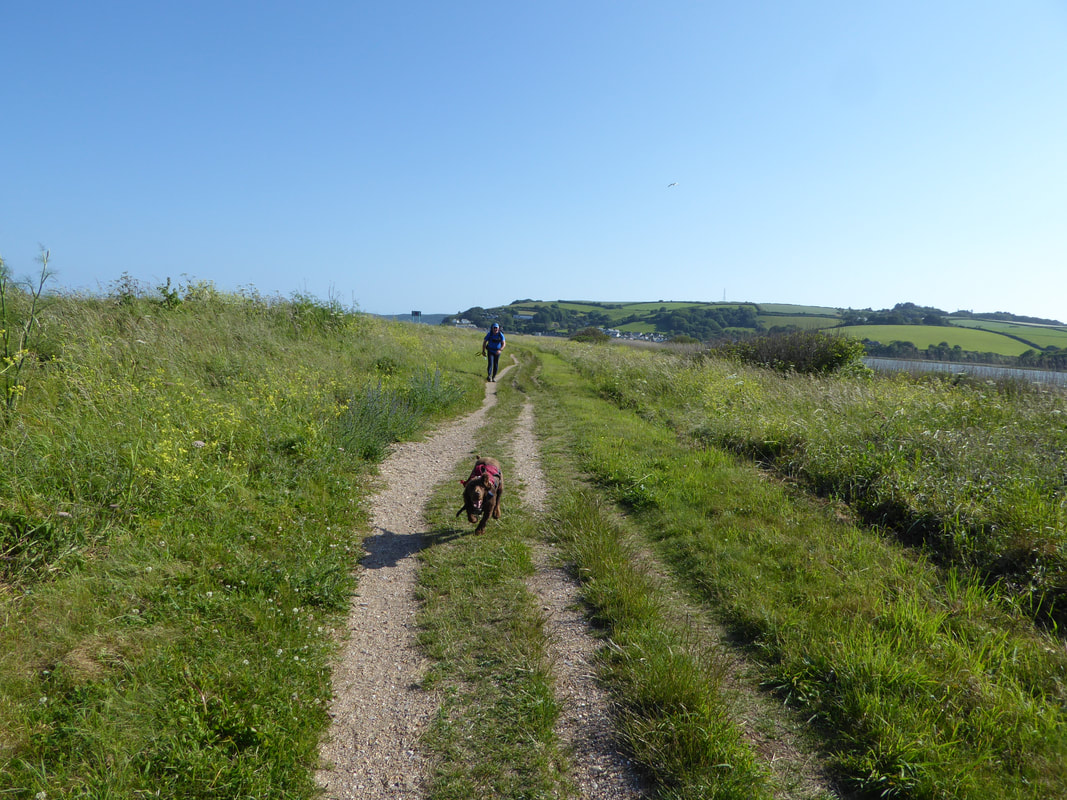 Heading alongside Slapton Ley - Fudge now has his second wind 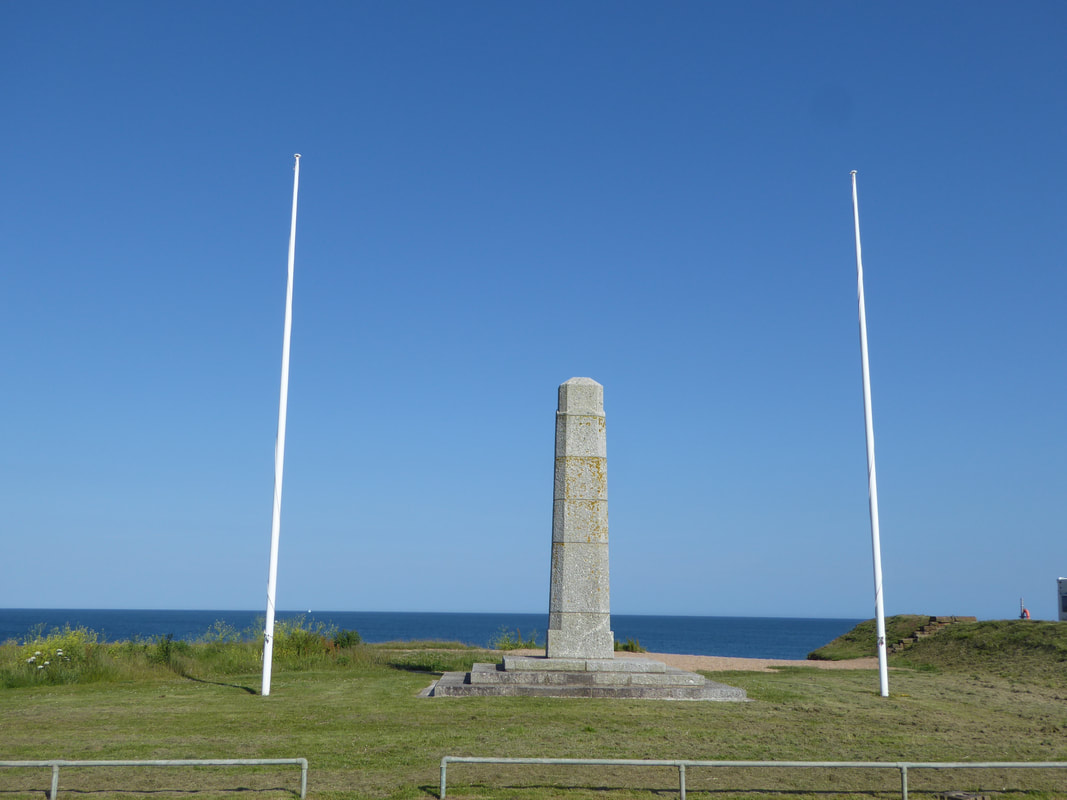 ​The War Memorial at Slapton Sands 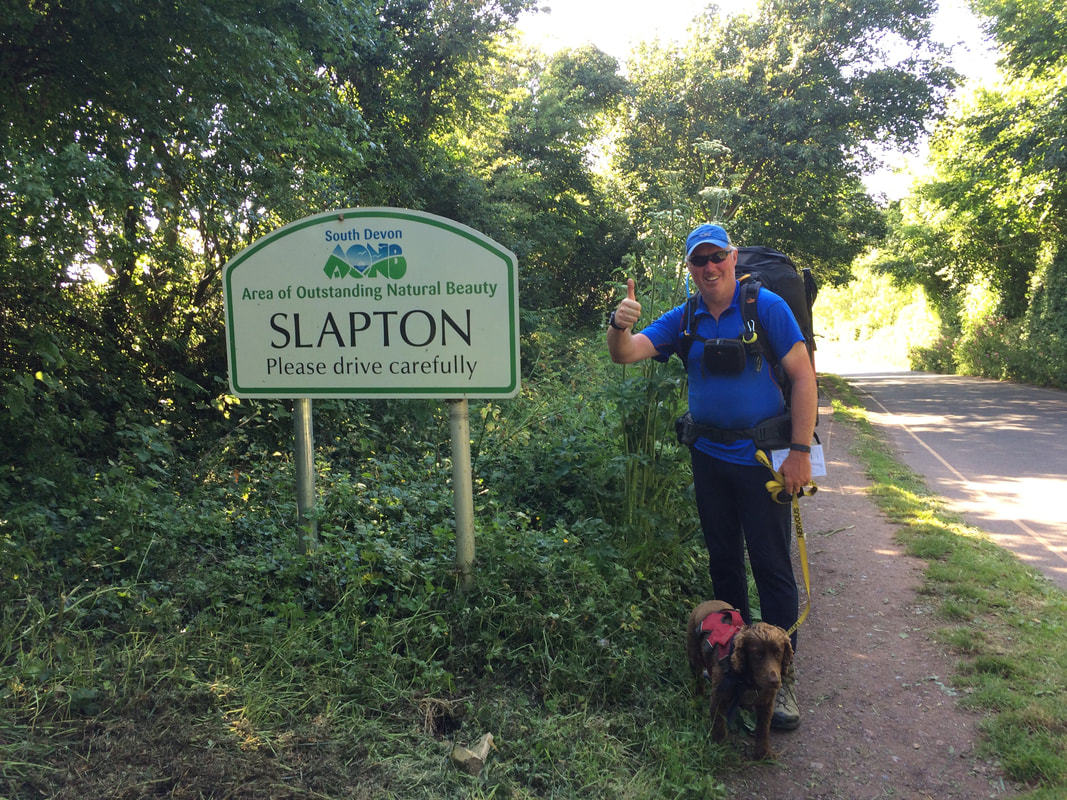 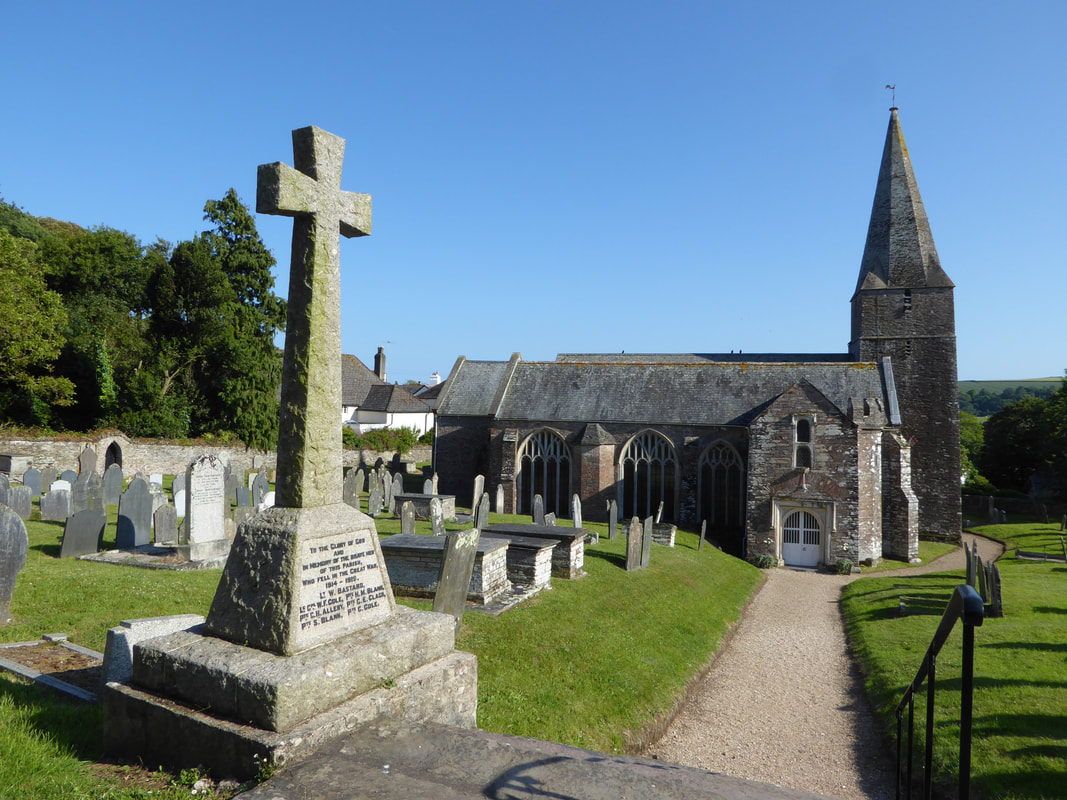 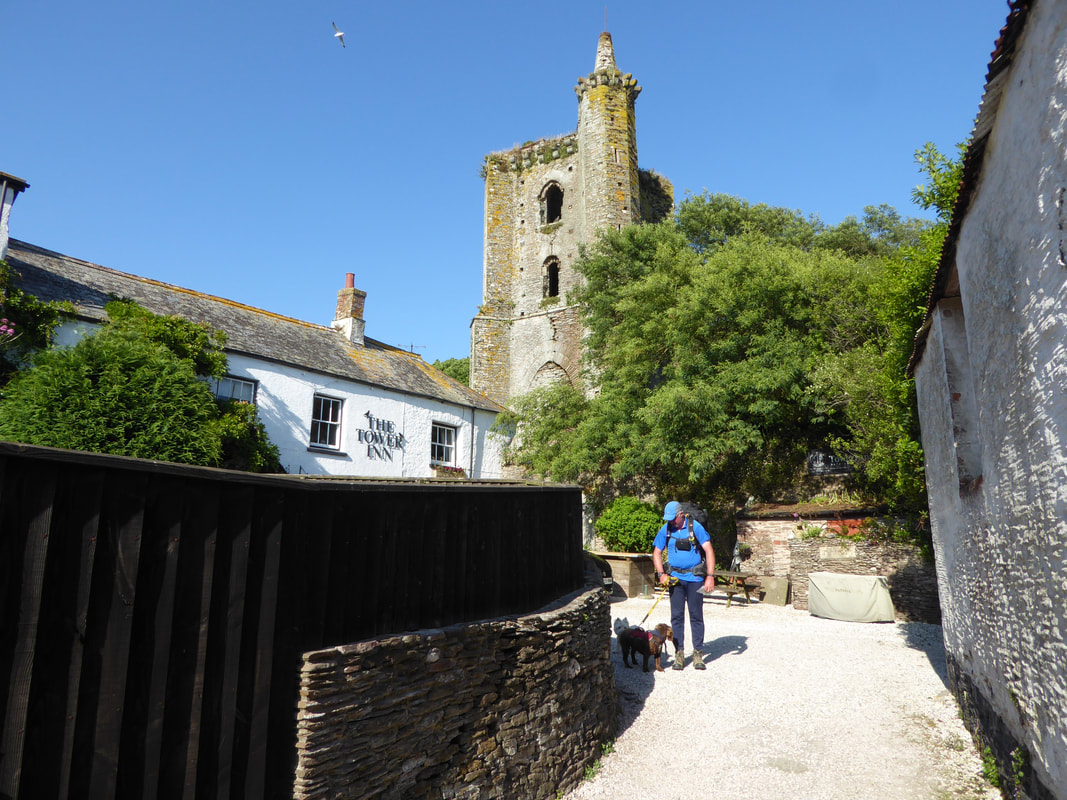