Good paths with some road walking along quiet lanes.
​
Weather

Overcast with some sunny spells.

Dave, Angie & Fudge with Paul & Cathy Jackson
​If the above GPX file fails to download or presents itself as an XML file once downloaded then please feel free to contact me and I will send you the GPX file via e-mail.  ​​ 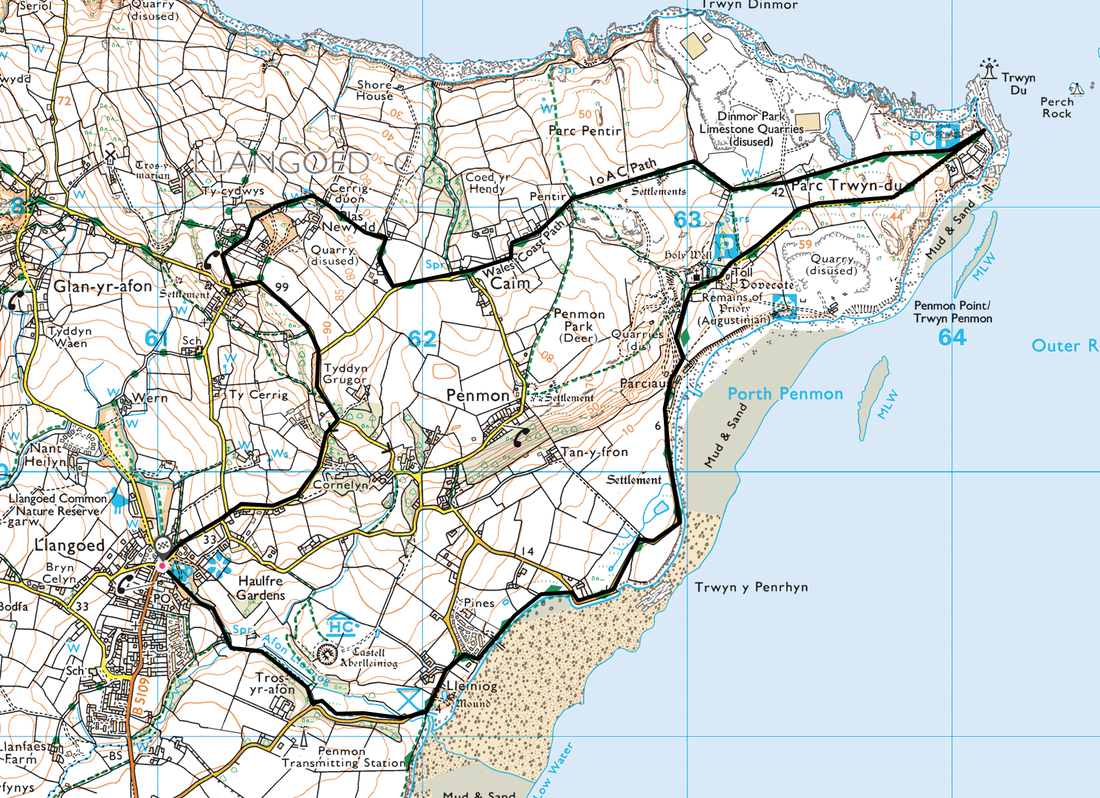 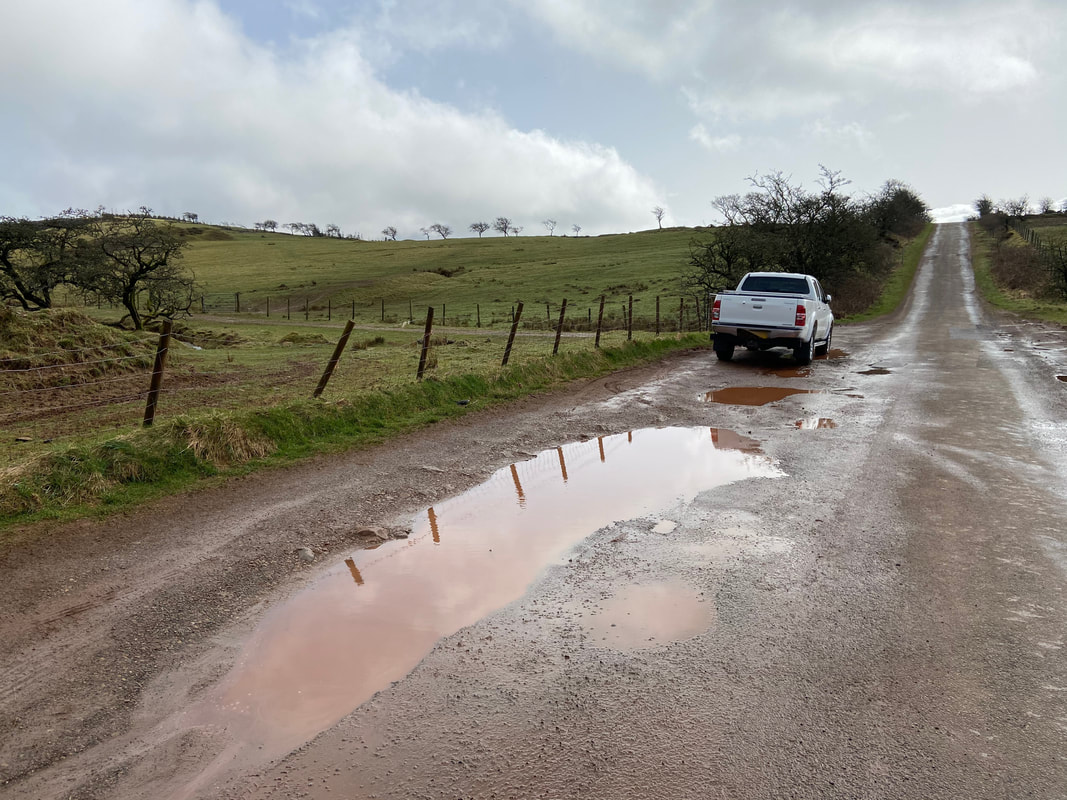 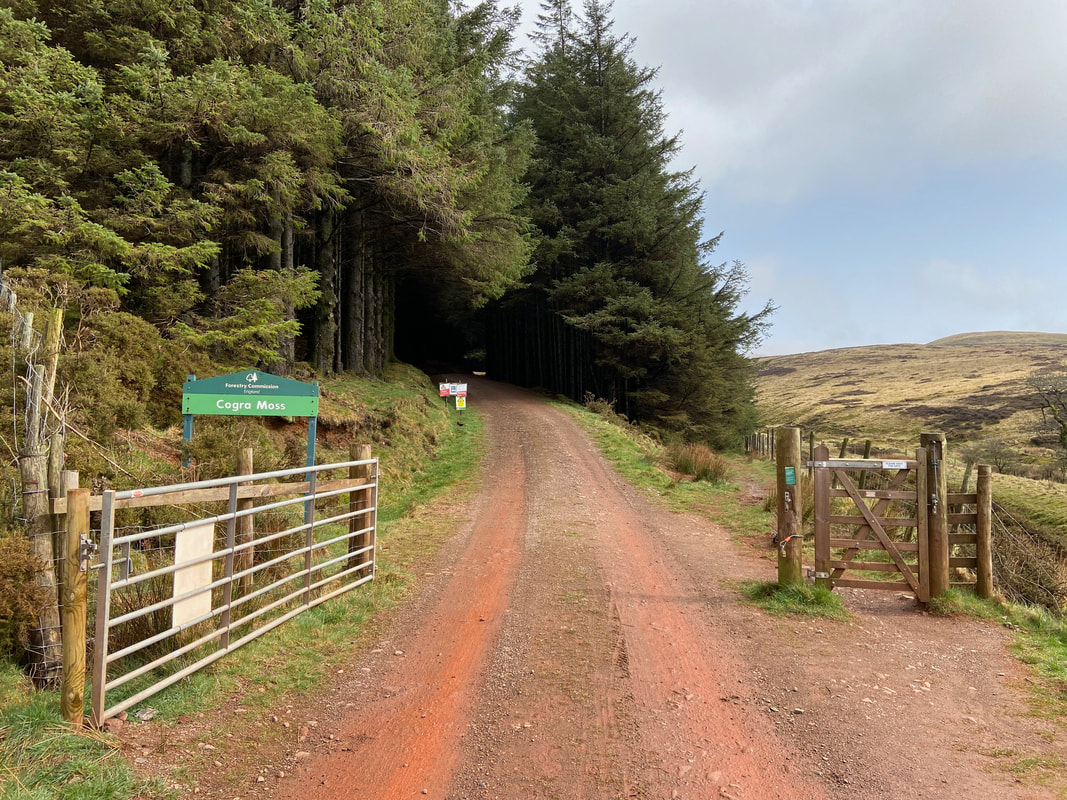 Heading along the beach at Porth Penmon 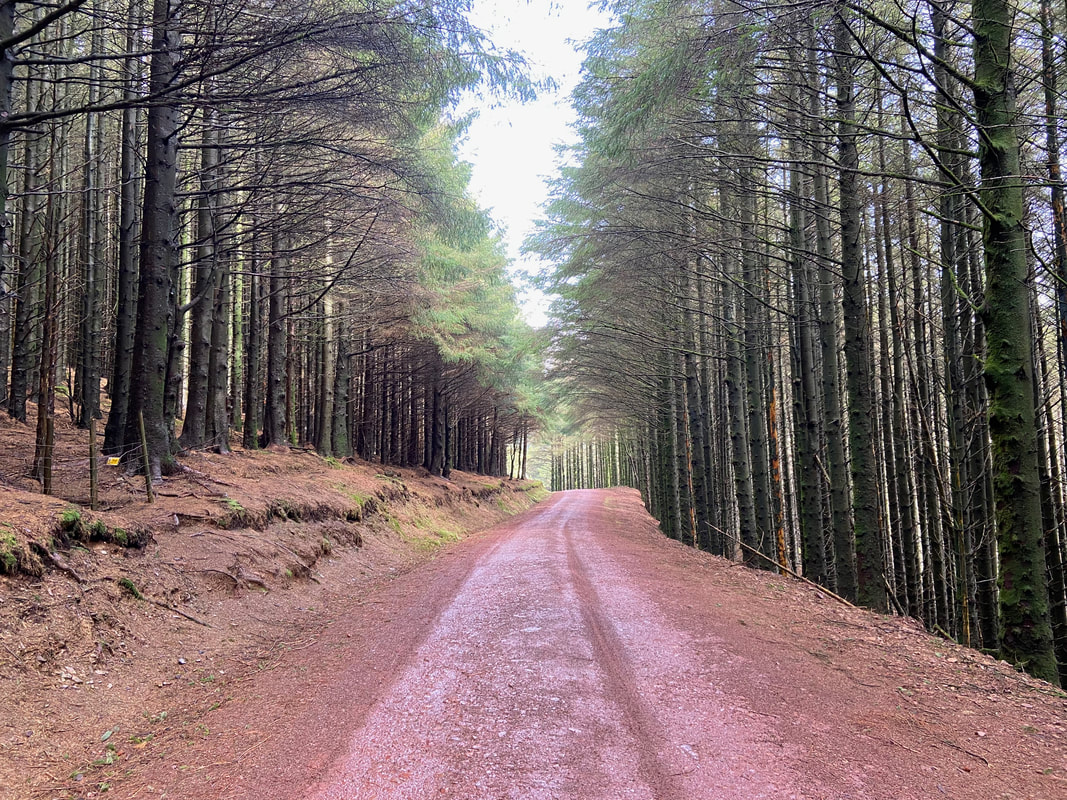 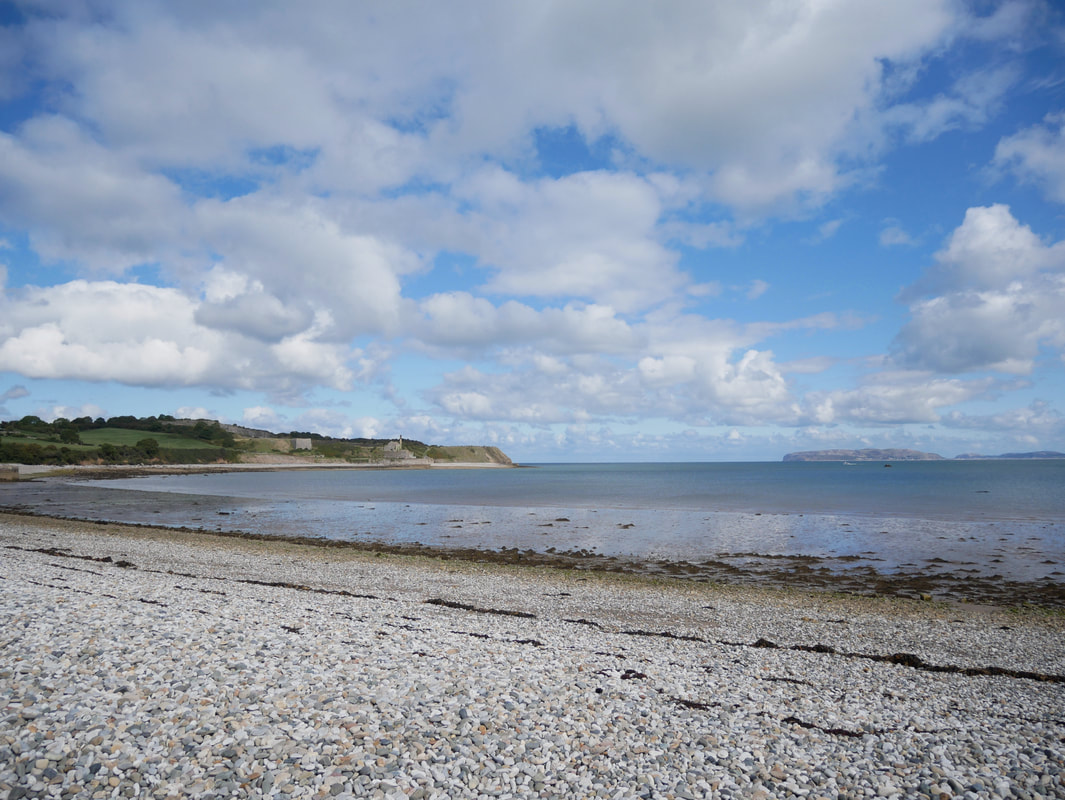 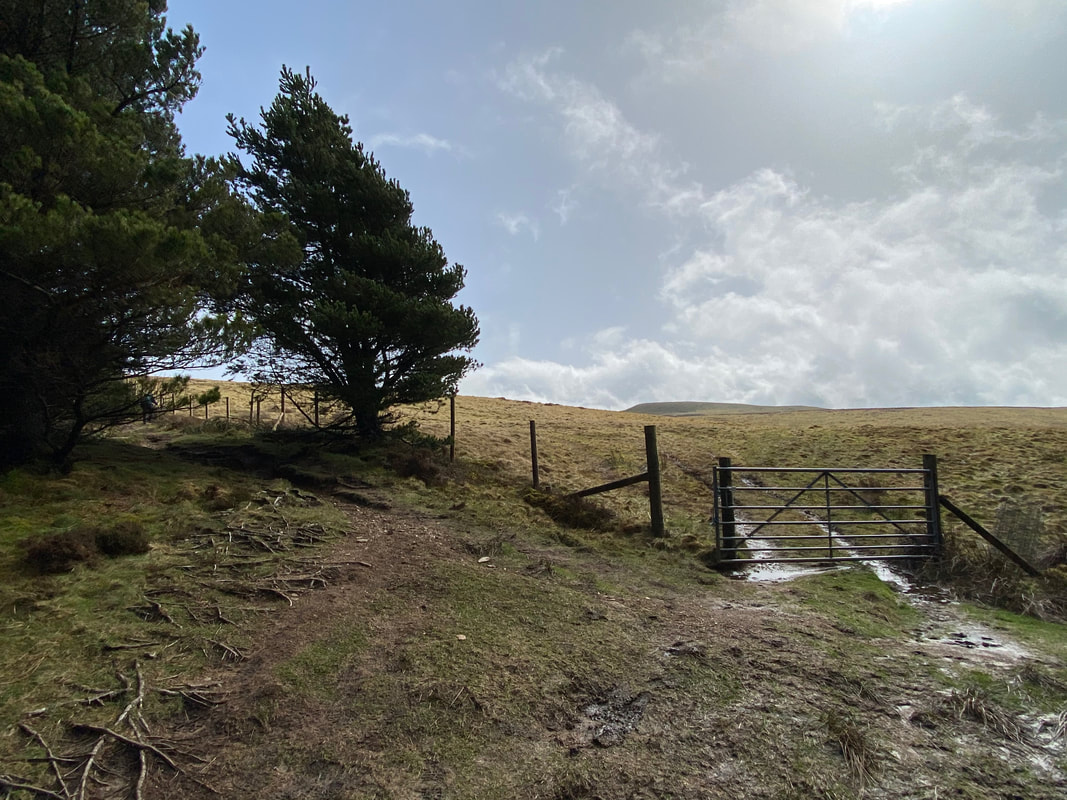 The monastery at Penmon is reputed to have been founded by St Seiriol, a 6th-century holyman and friend of St Cybi. The monastery prospered and in the 10th century fine crosses were set up at its gates, but the Viking raids have destroyed all other evidence of this date. During the 12th century, revival under Gruffydd ap Cynan and Owain Gwynedd the abbey church was rebuilt, and it remains the finest and most complete example of a church of this period in Gwynedd. In the 13th century the Celtic monasteries were persuaded by Llewelyn to adopt a more regular rule, and Penmon eventually became an Augustinian priory with quite substantial conventual buildings. The priory survived the Edwardian conquest and expanded slightly, but was dissolved in 1538. The buildings passed into the hands of the Bulkeleys of Beaumaris, who enclosed much of the land as a deep park and built a fine dovecote. They also converted the prior's lodging into a rather attractive house. Throughout this time the priory church remained in use, as it does today 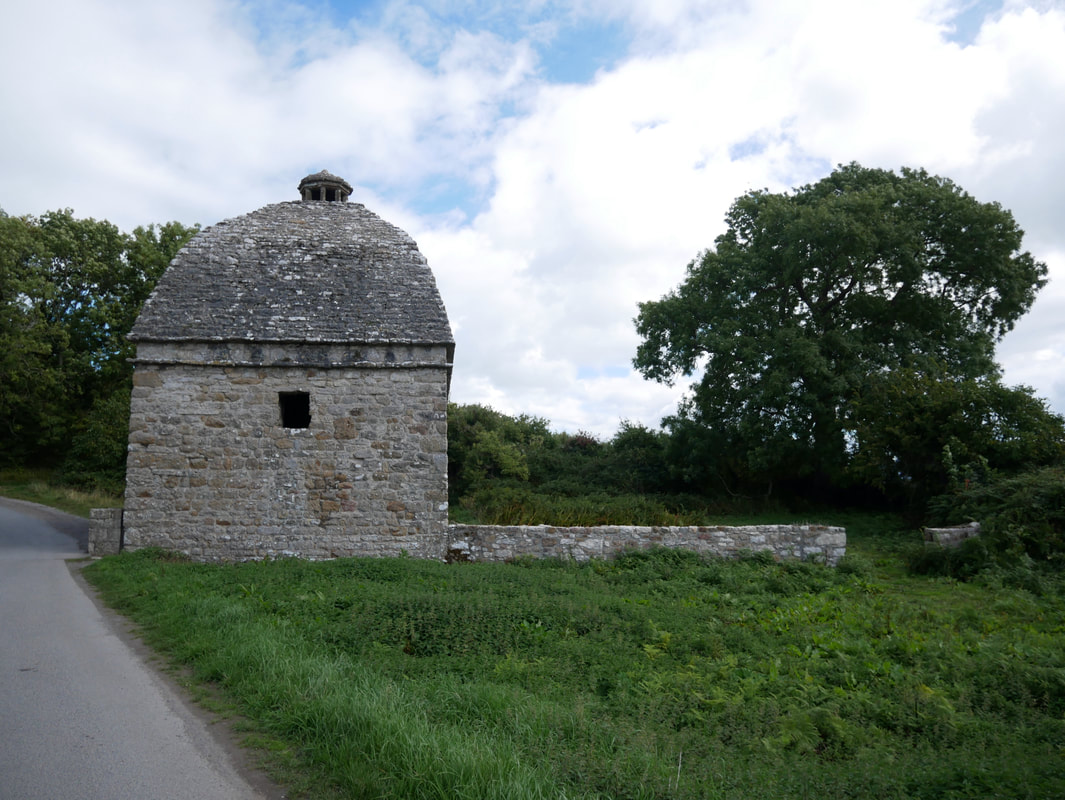 The Dovecot (also spelt dovecote) standing near the church was probably built in about 1600, in Elizabethan times, by Sir Richard Bulkeley for housing pigeons for their eggs and meat. It has a large domed roof with a cupola on top in order that birds could fly in and out. Inside the Dovecot were 1,000 nesting boxes, with a pillar in the centre supporting a revolving ladder to provide access to the nesting boxes. The central pillar remains, but the ladder is now gone. 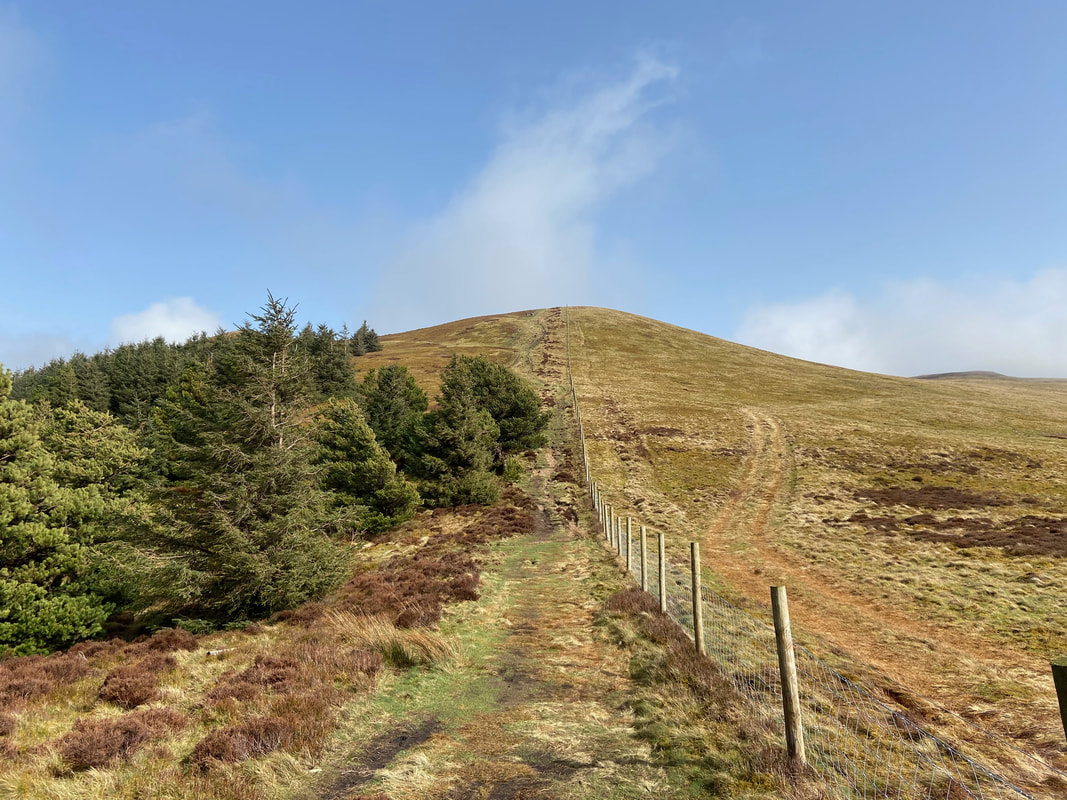 Another view of the Dovecot 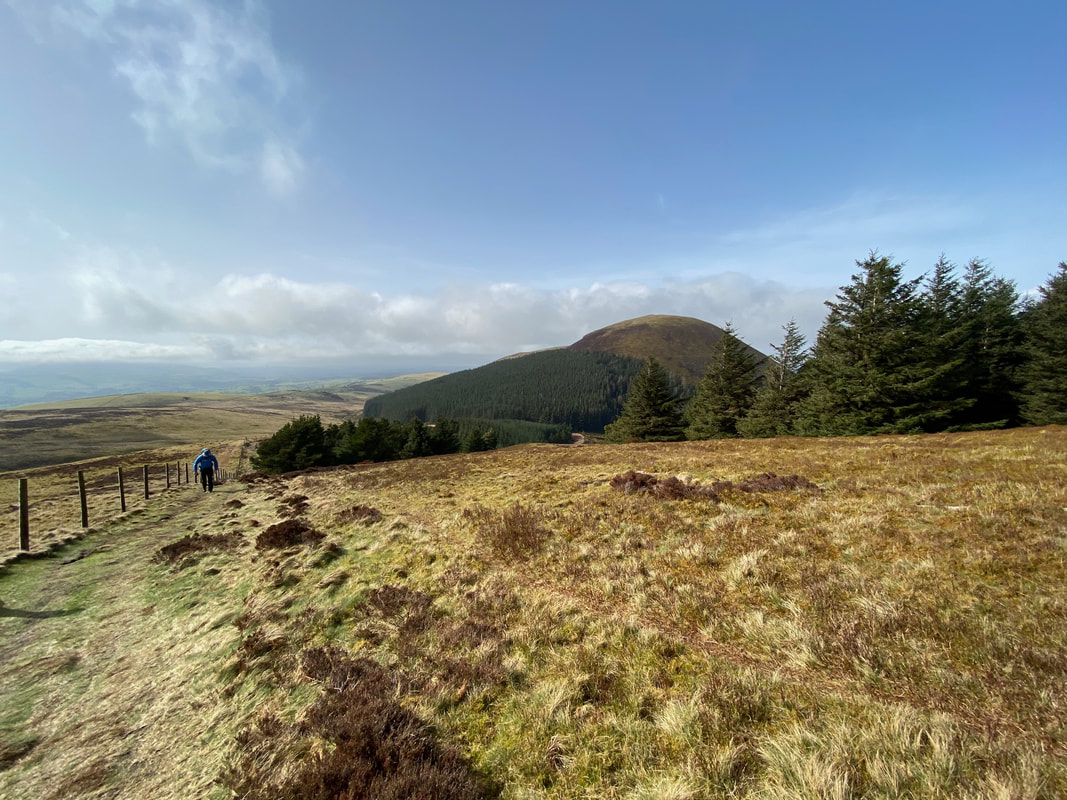 St Seiriol's Well.  The well is traditionally associated with St Seiriol who lived in the 6th Century AD.  The lower part of the well chamber and the nearby oval hut may go back to early Christian times, but the masonry was probably rebuilt in the 18th Century. 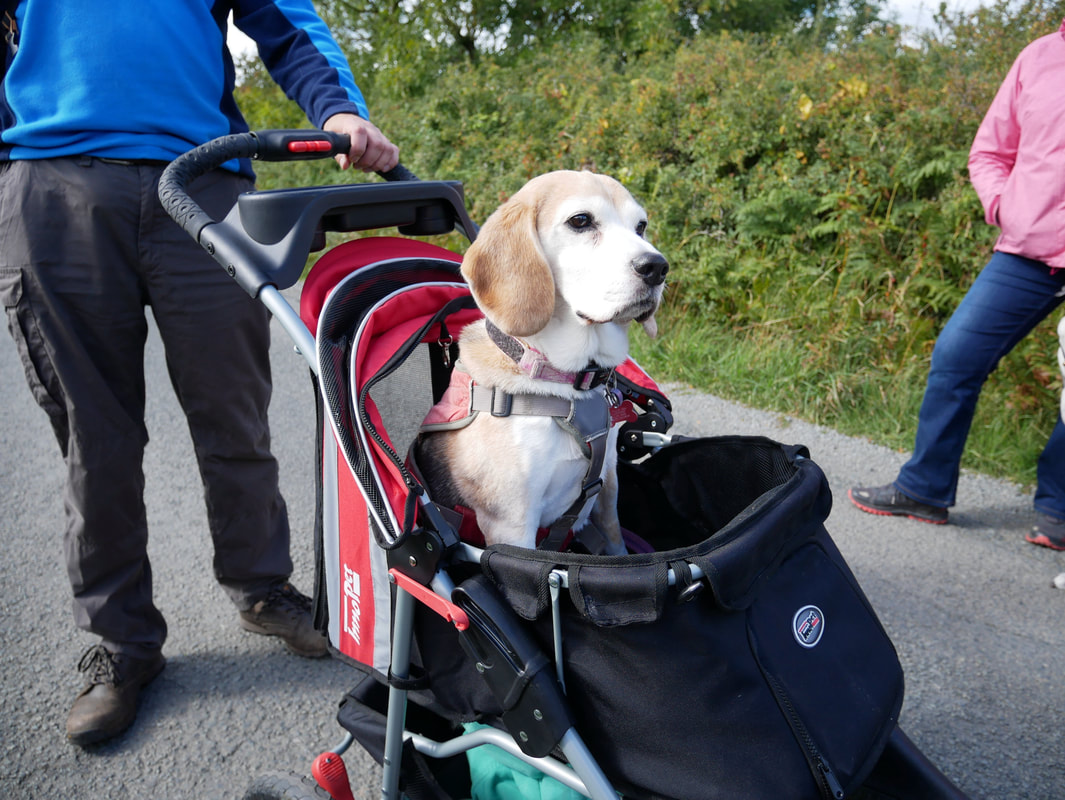 As we were heading to Penmon Point we came across this lovely elder statesman, a Beagle called Barney. 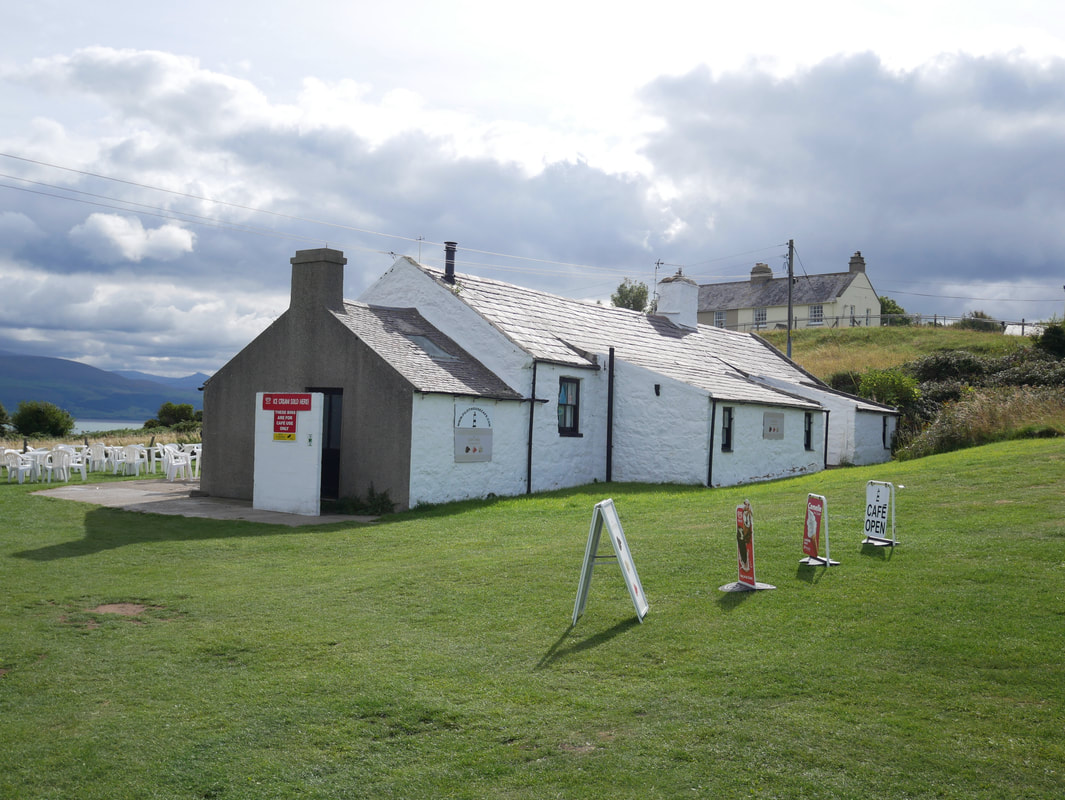 The cafe at Penmon Point 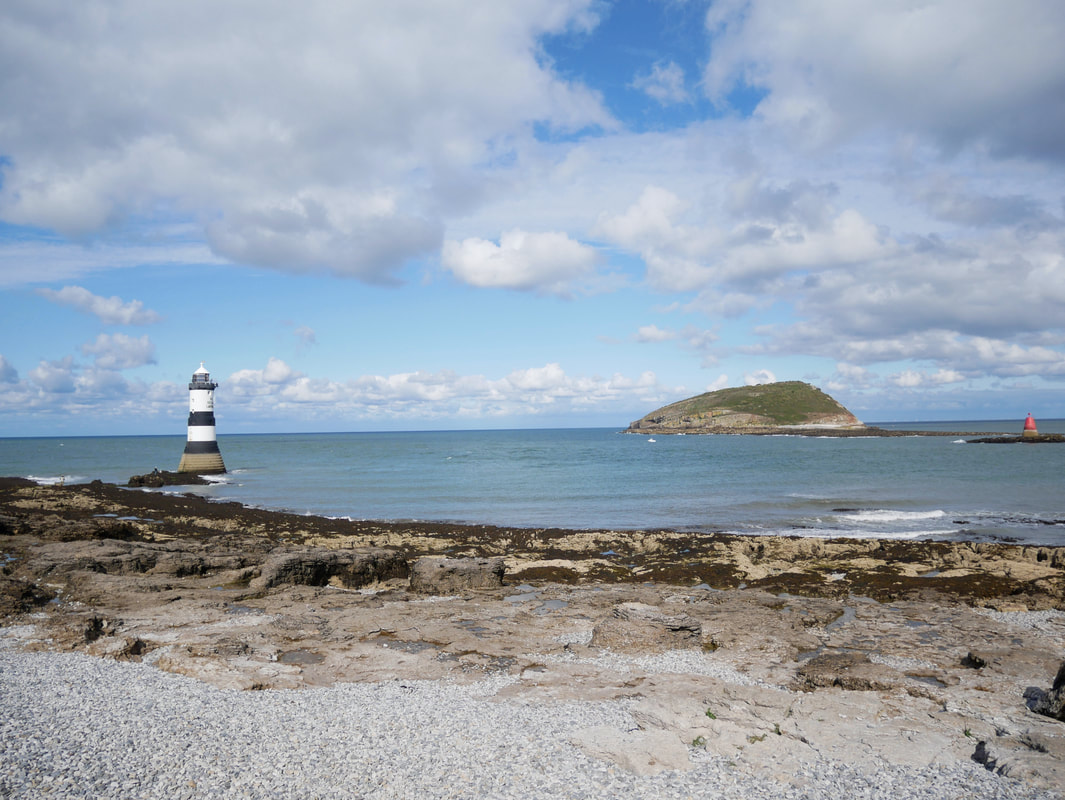 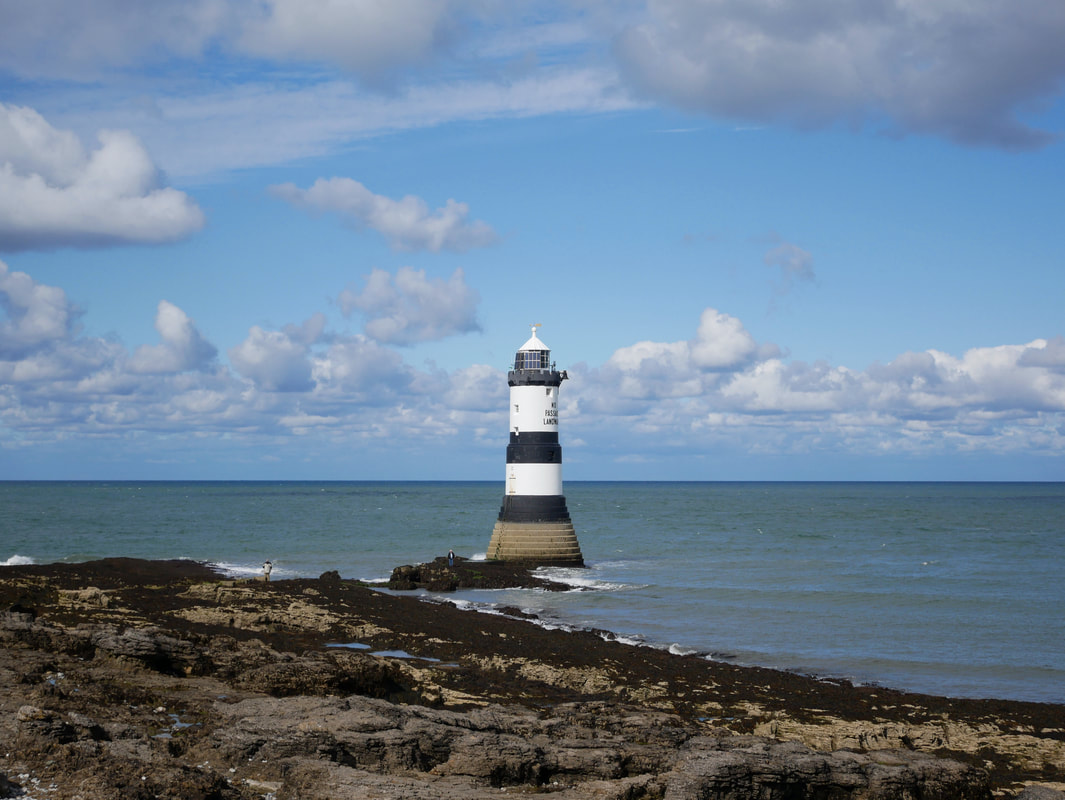 Trwyn Du Lighthouse also known as Penmon Lighthouse.  The lighthouse was erected in 1838 at a price of £11,589. There had been a call for a light at this location for some years by master shipmen in the nearby city of Liverpool, especially after the steamer the Rothsay Castle ran aground and broke up on nearby Lavan Sands in 1831 with 130 people losing their lives (link here).  The Lighthouse is 29 metres (95') tall and was designed by James Walker. It was his first sea-washed tower, and a prototype for his more ambitious tower on the Smalls.  The Lighthouse has a stepped-base designed to discourage the huge upsurge of waves that had afflicted earlier lighthouses on the site and reduce the force of the water at the bottom of the tower. 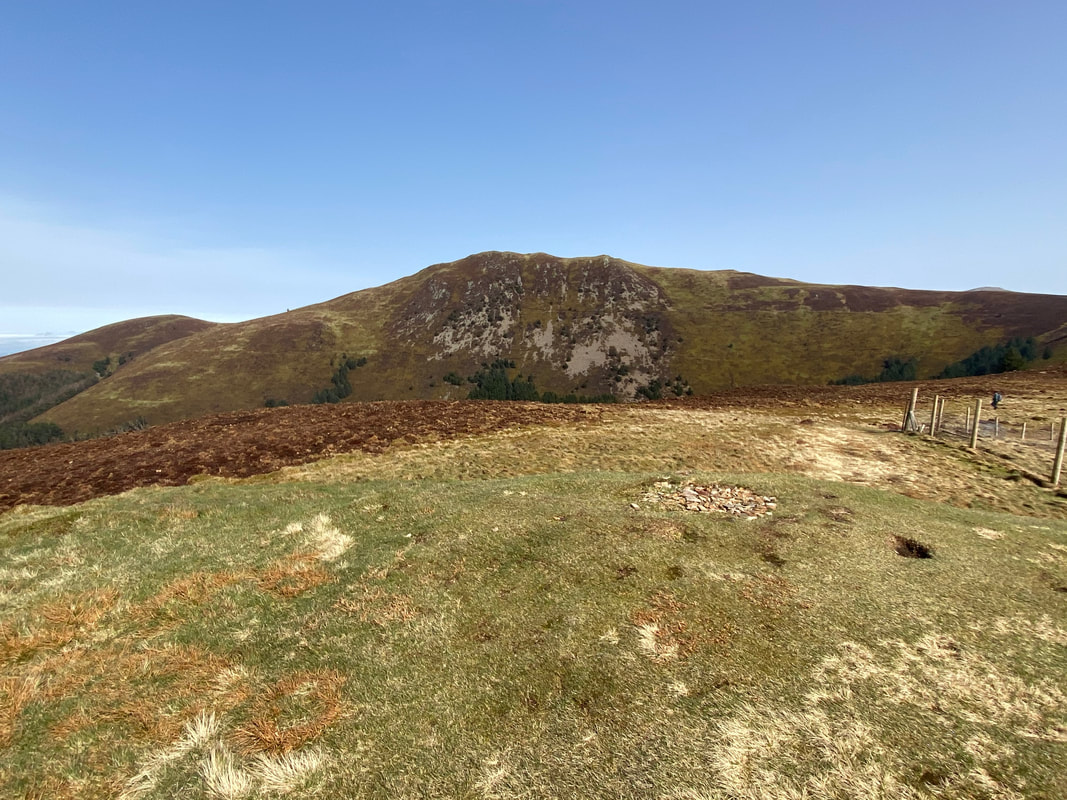 Puffin Island (in Welsh Ynys Seiriol ) is uninhabited.  It was formerly known as Priestholm in English and Ynys Lannog in Welsh.  A hermitage was established on the island around the 6th century, and there are remains of a 12th-century monastery on the island. The island is also a Special Protection Area for wildlife and is home to a Cormorant colony of some 750 birds which is over 10% of the national population, making it one of the largest colonies in the British Isles. 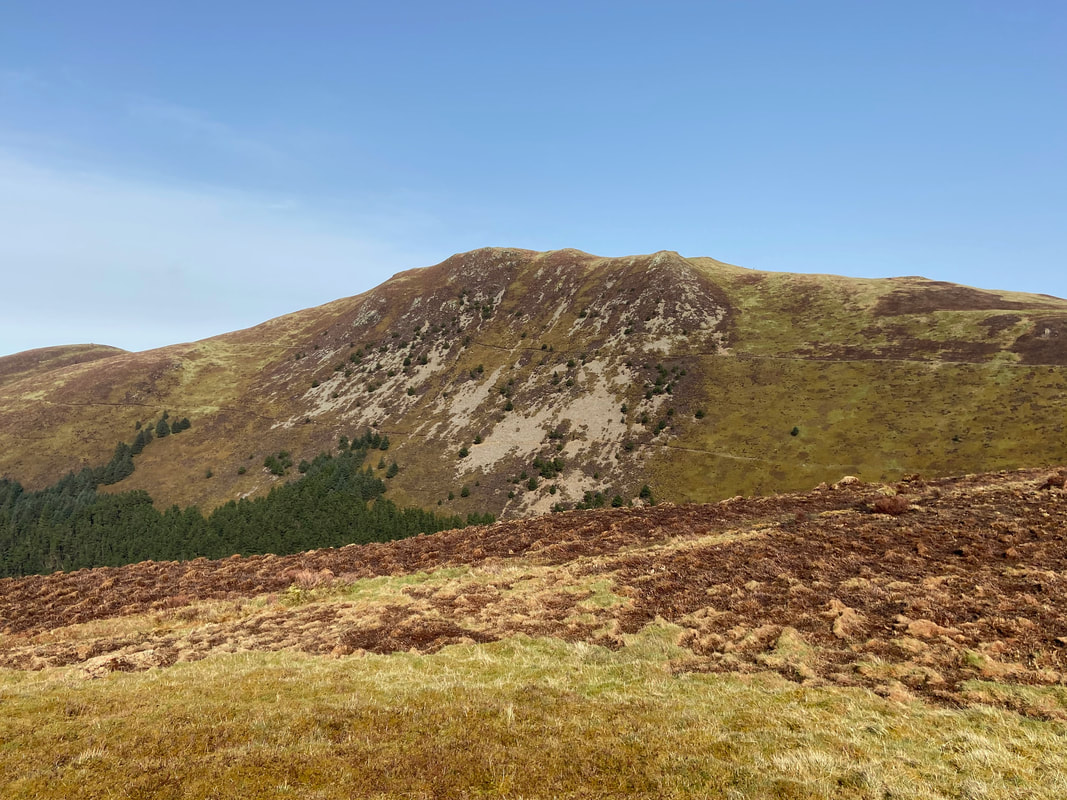