Parking area on a sharp bend in the road approximately 1/4 a mile north east of the farm at Birkrigg (free) - Grid reference NY 2297 2017.  Nearest postcode is CA12 5TS.  There is enough room for about 6 sensibly parked cars.

Good mountain paths for the most part.  However the last mile and a half is along a quiet lane although in the summer, particularly at the weekend then this road will be extremely busy. 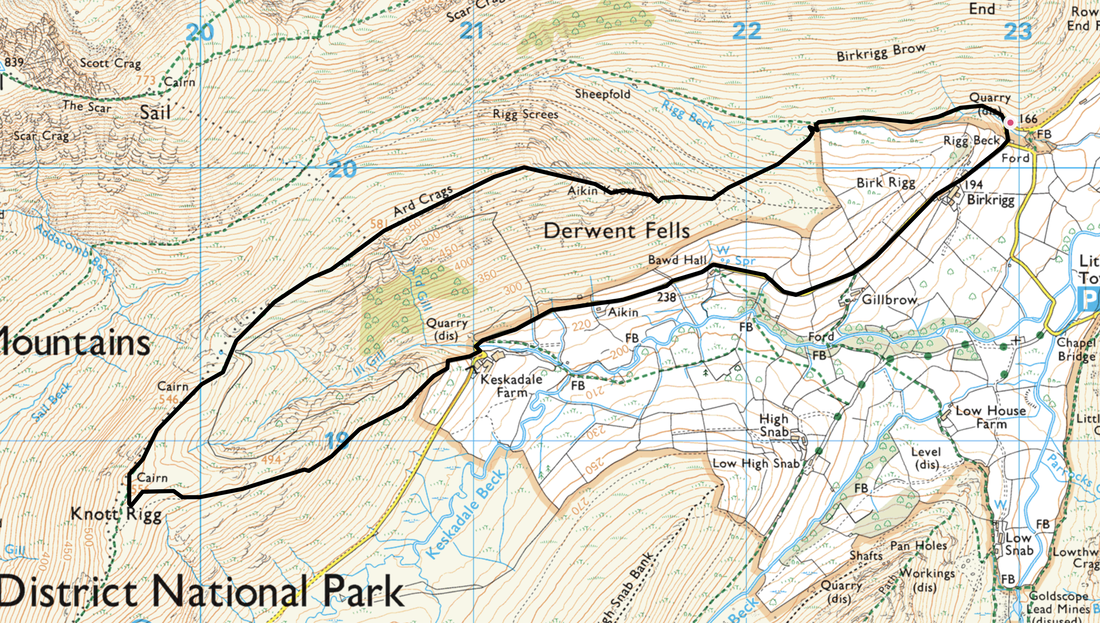 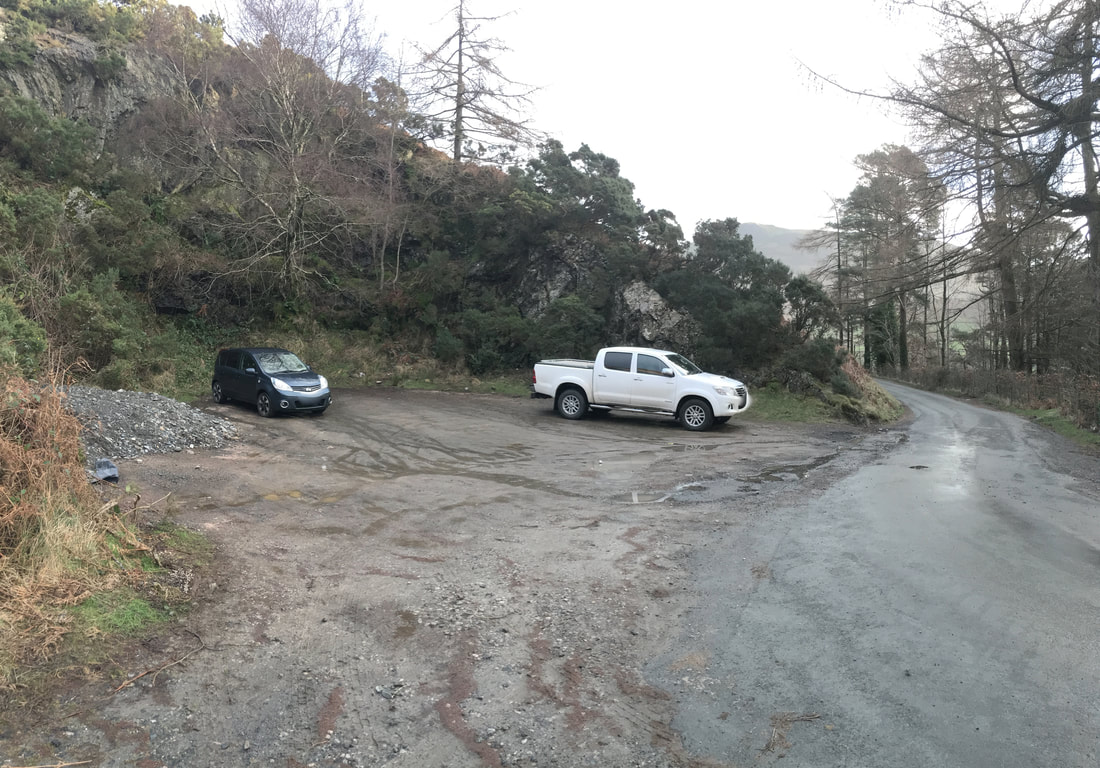 The parking area at Rigg Beck.
The parking area is more than likely left over from quarry workings and excavations.  If travelling from the direction of Stair, once you have crossed Rigg Beck the Car Park is on the right hand side on a sharp hairpin bend. 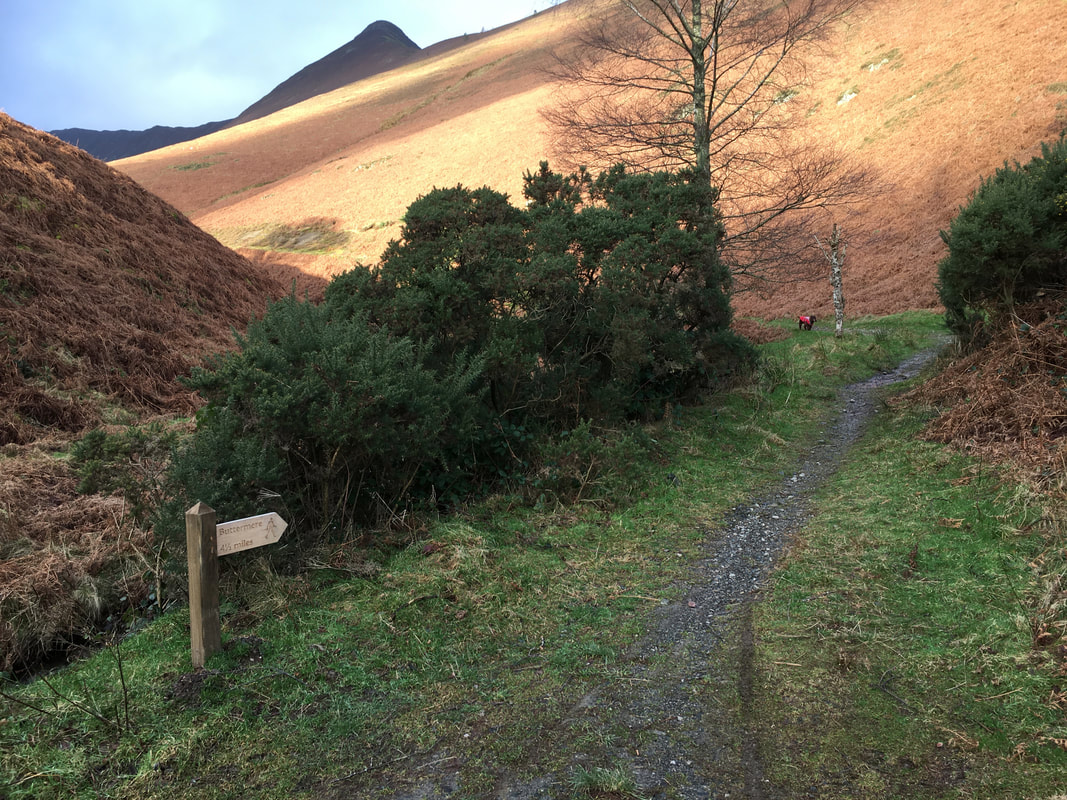 From the Car Park a path heads to the west in the direction of Buttermere. ​As can be seen, Fudge was raring to go today - even more so as there was plenty of water about. 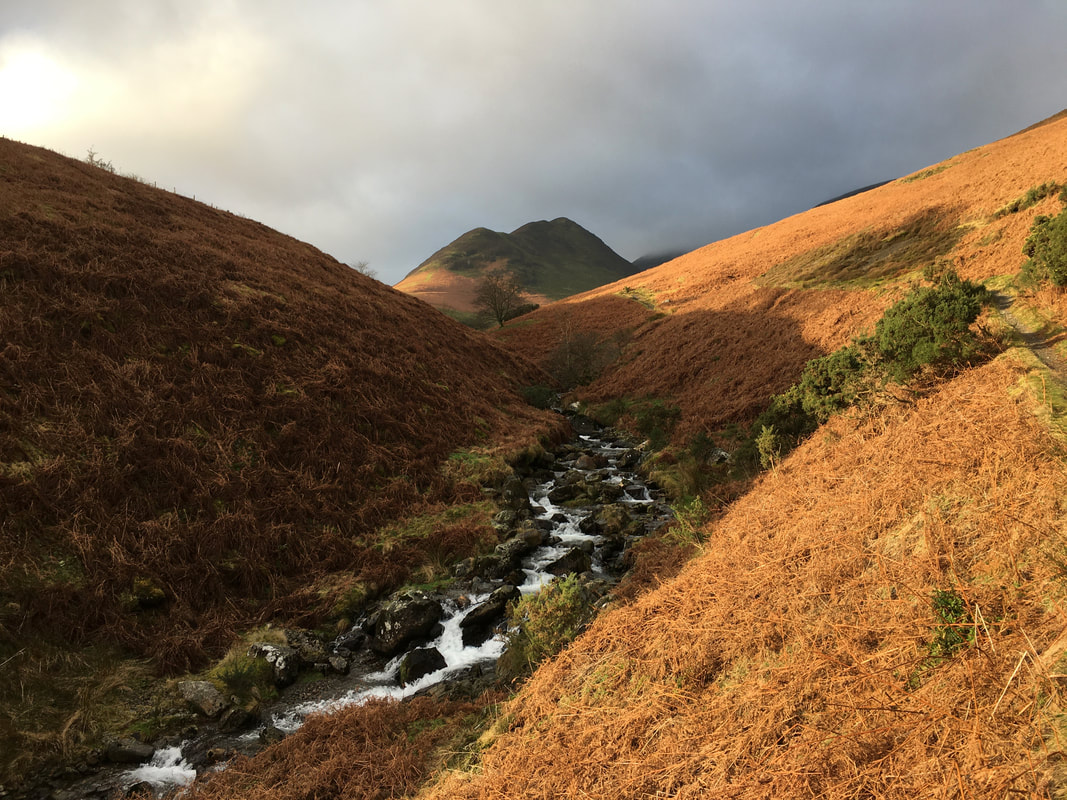 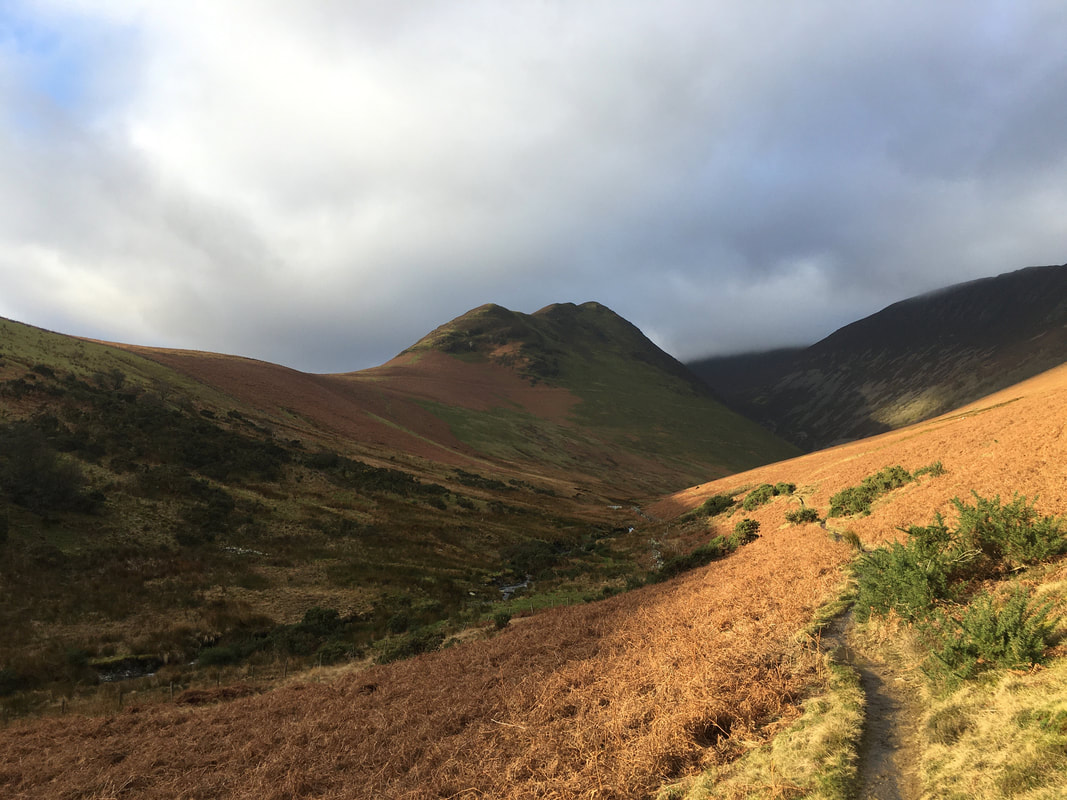 Continuing up the valley alongside Rigg Beck.
The route leaves the main path to cross the beck and head left up to the col below Aikin Knott.​ 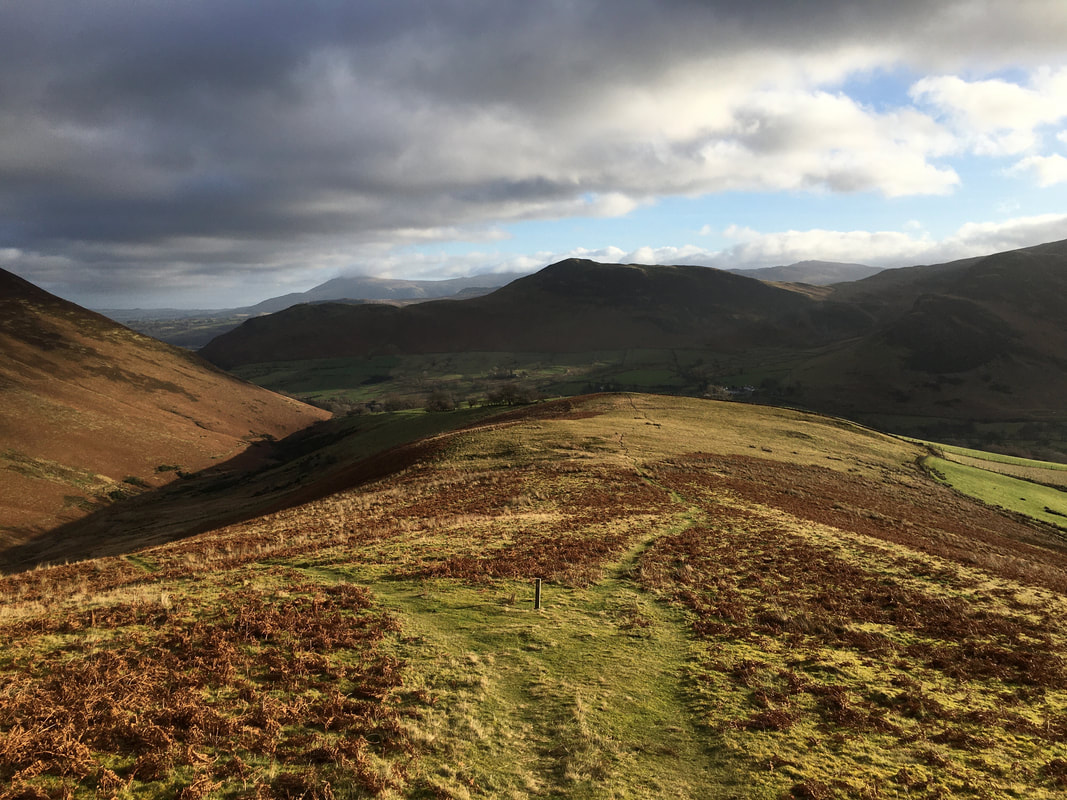 Looking back to the marker post as we start the ascent up to Aikin Knott. ​Our route up to this point is to the left with Rigg Beck below. 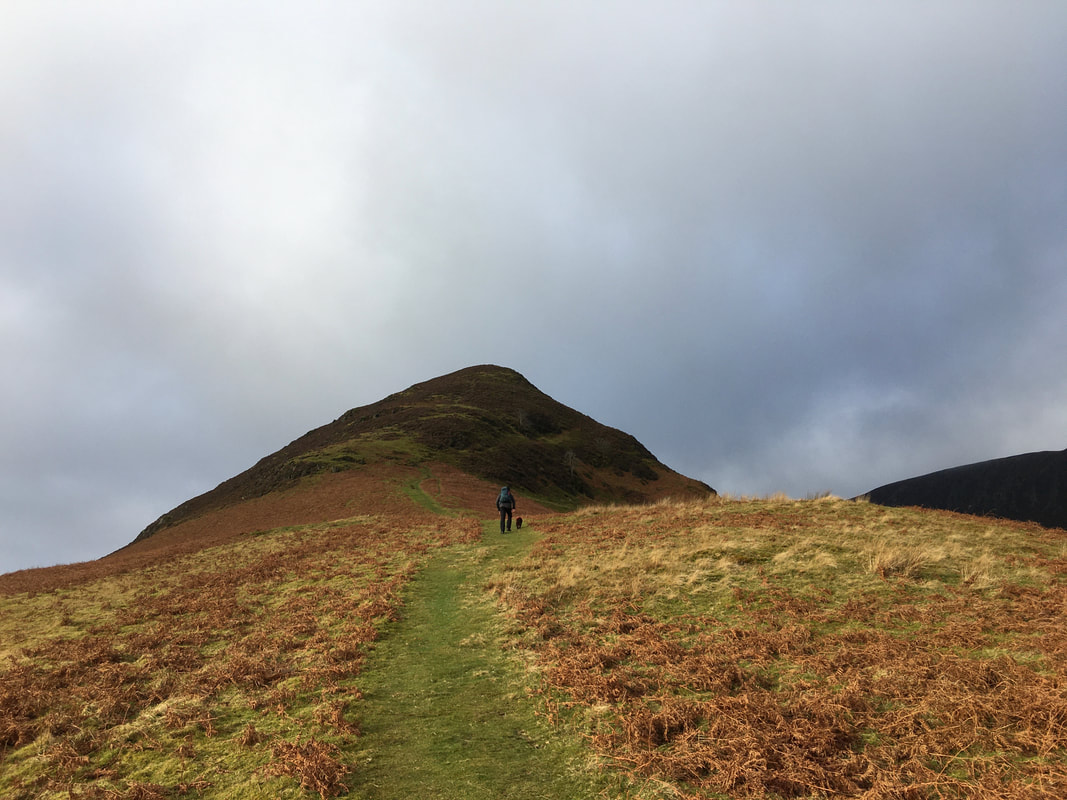 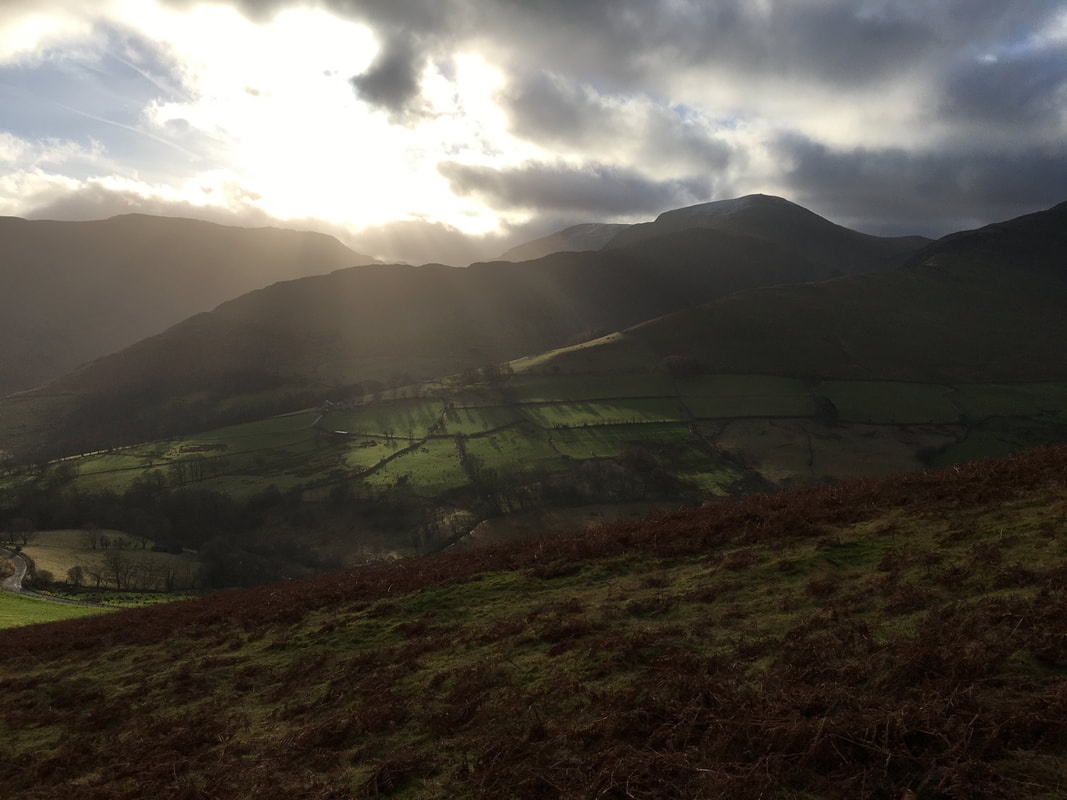 Bursts of sunlight in the Newlands Valley.
High Snab Bank & Robinson Crags are in the centre of shot with Scope End in the foreground. 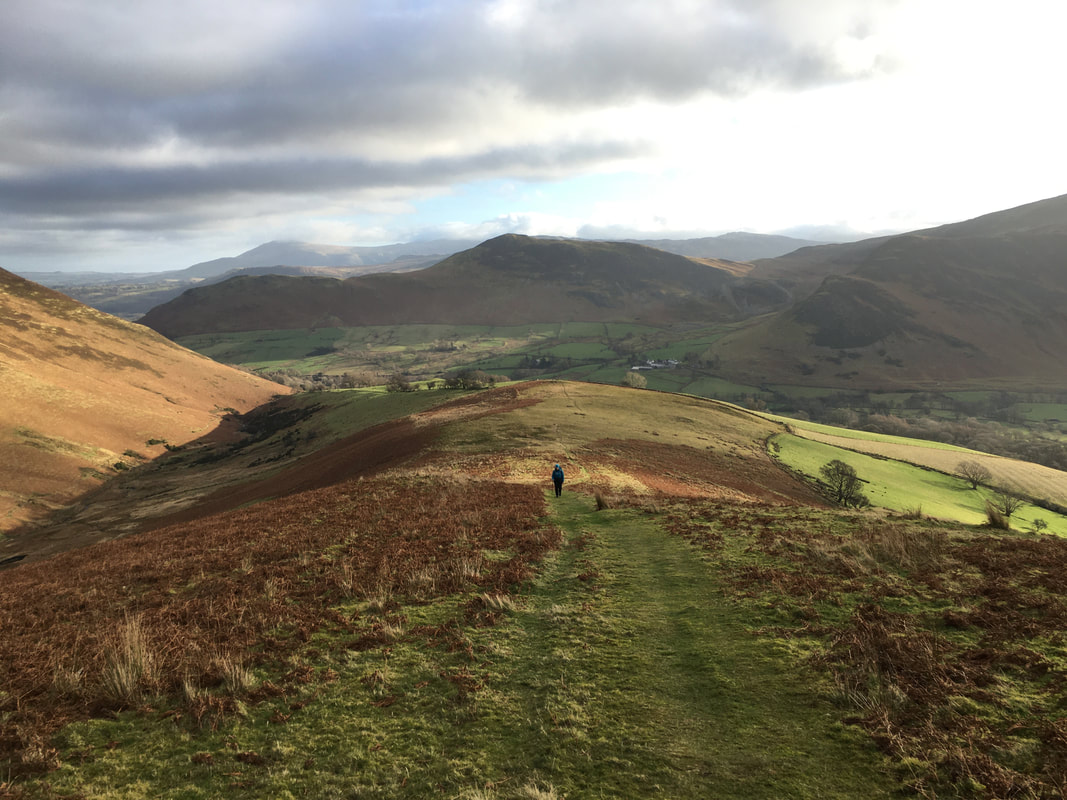 Absolute solitude as we continue up to Aikin Knott 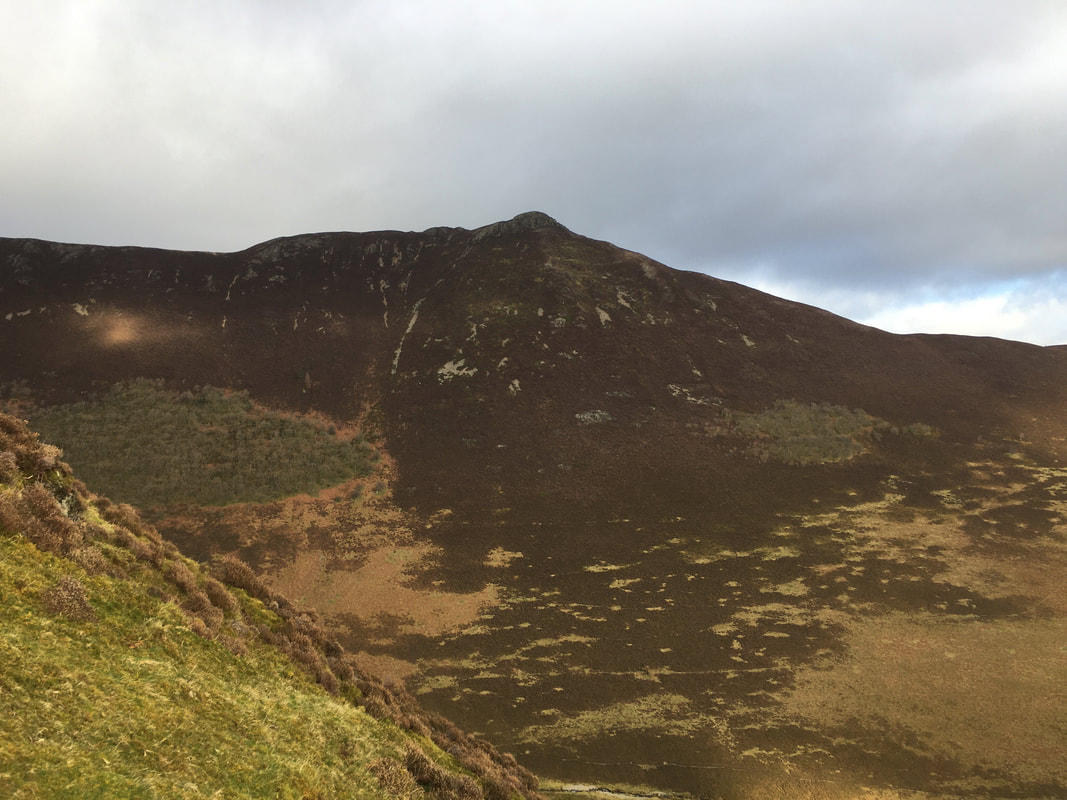 Causey Pike from near Aikin Knott 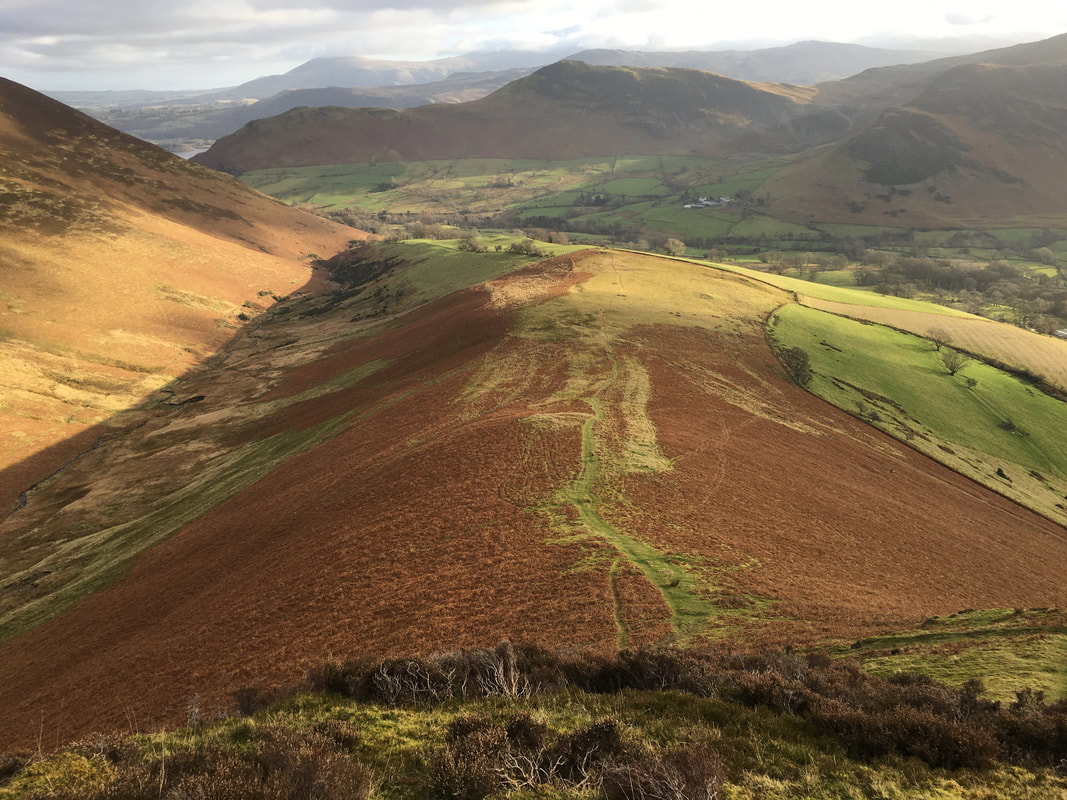 Our route of ascent from just below Aikin Knott 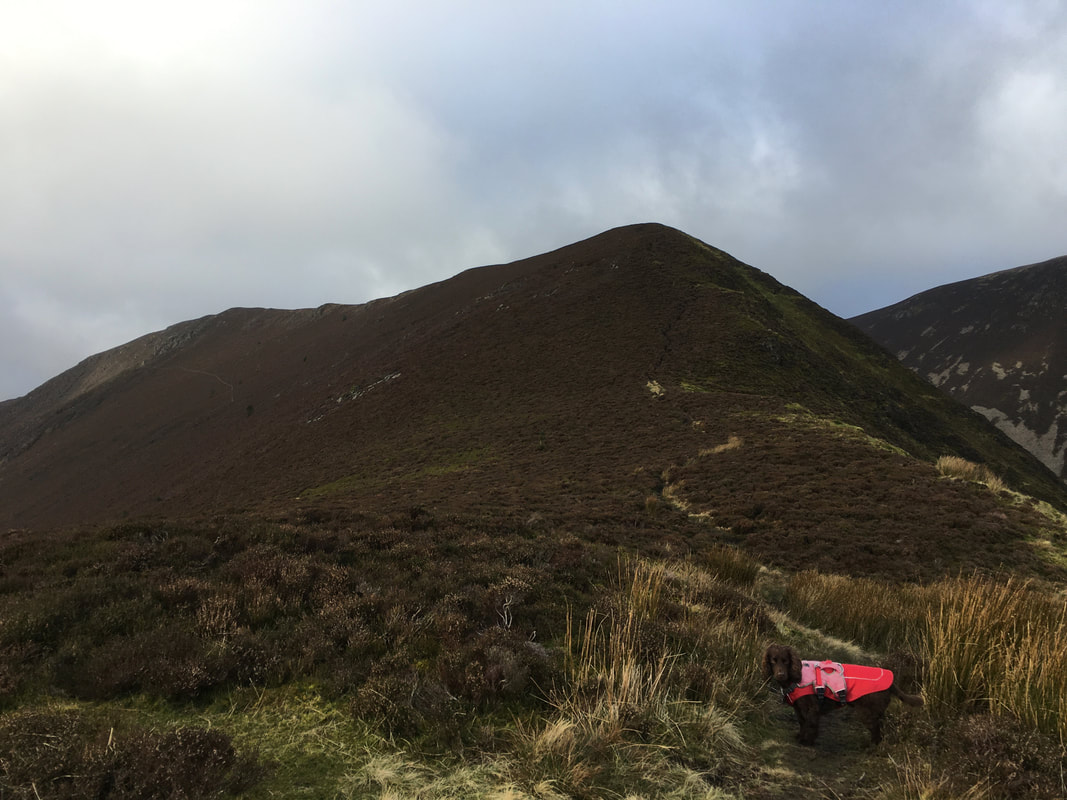 Looking back along the ridge to Causey Pike 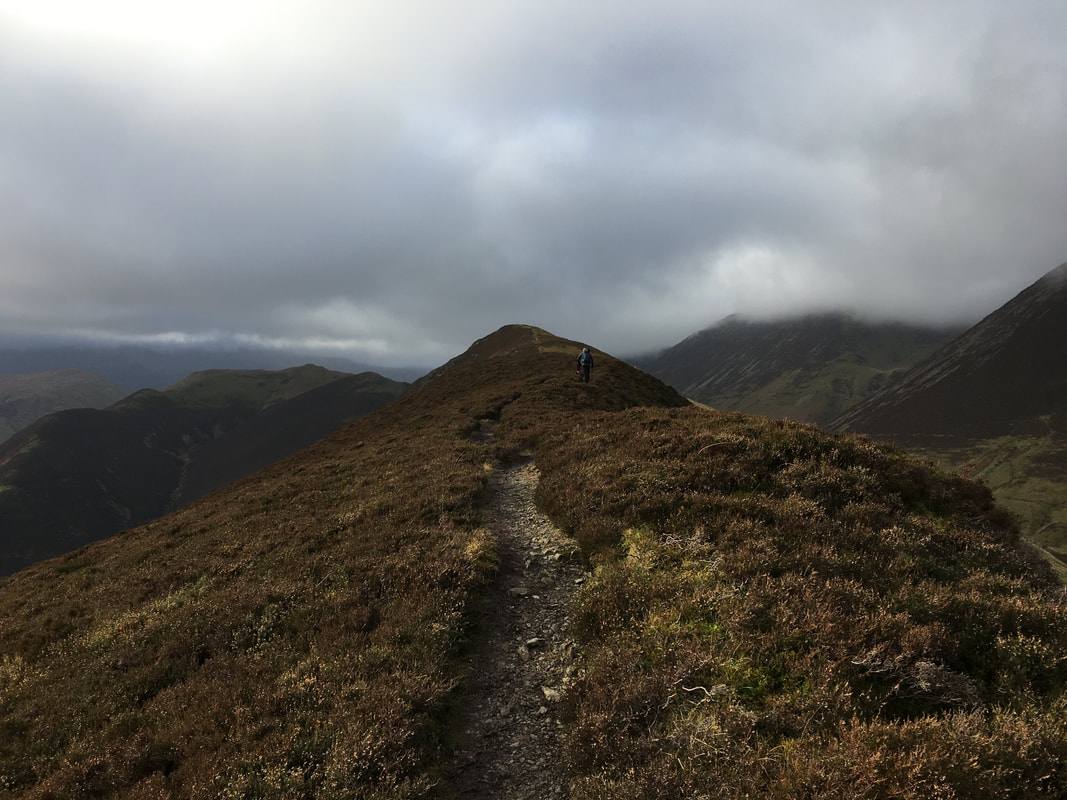 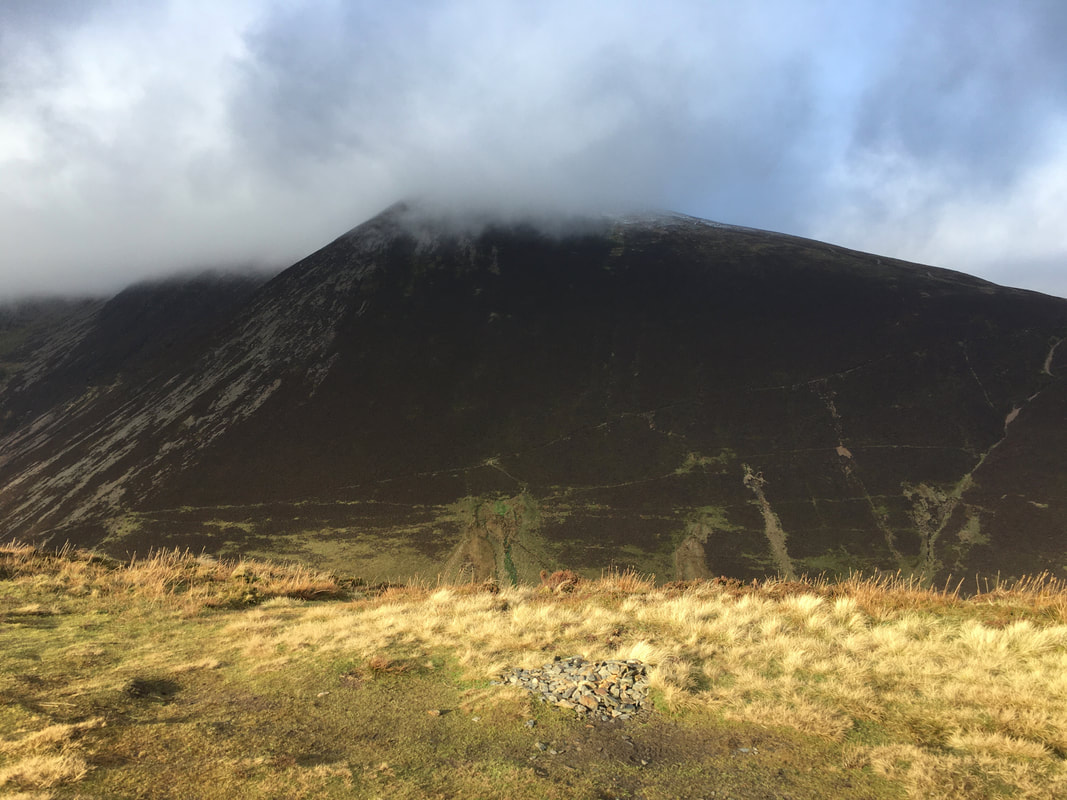 A cloud topped Sail from the summit of Ard Crags. Wainwright makes an interesting and very relevant observation from the chapter on Ard Crags:

"In fell-climbing (as in other pursuits) there is a difference between achievement and satisfaction. One’s sense of achievement is roughly in proportion to altitude gained by effort, but one’s sense of satisfaction is not necessarily governed by the same rule. Lonely Ard Crags offers, especially in August, a climb up to a personal heaven of one’s very own - at only 1800 feet"  (Ard Crags 3) 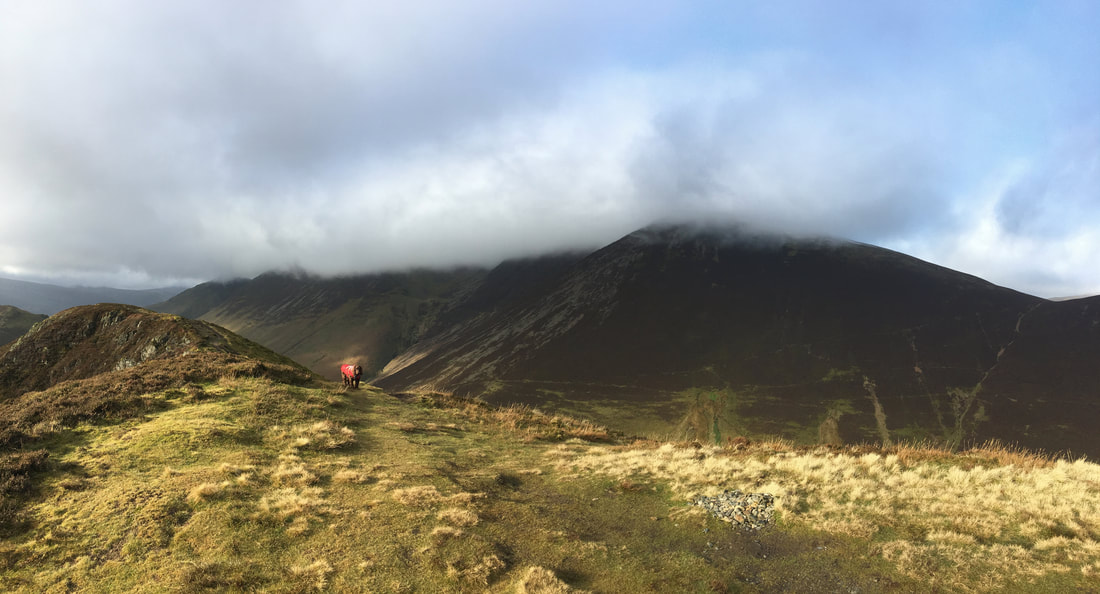 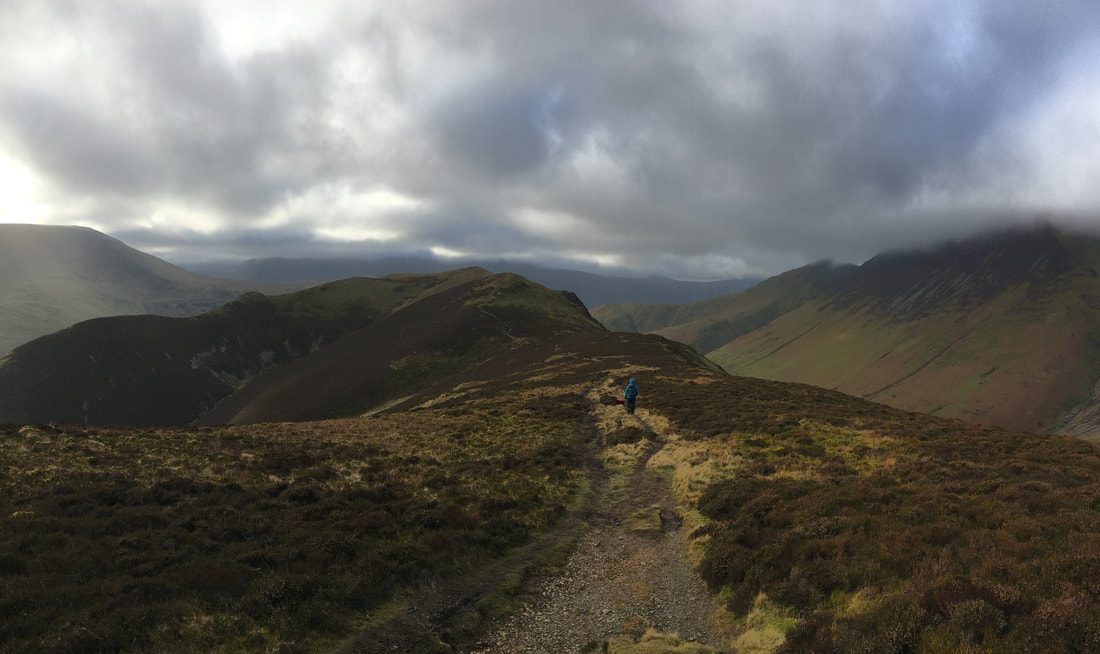 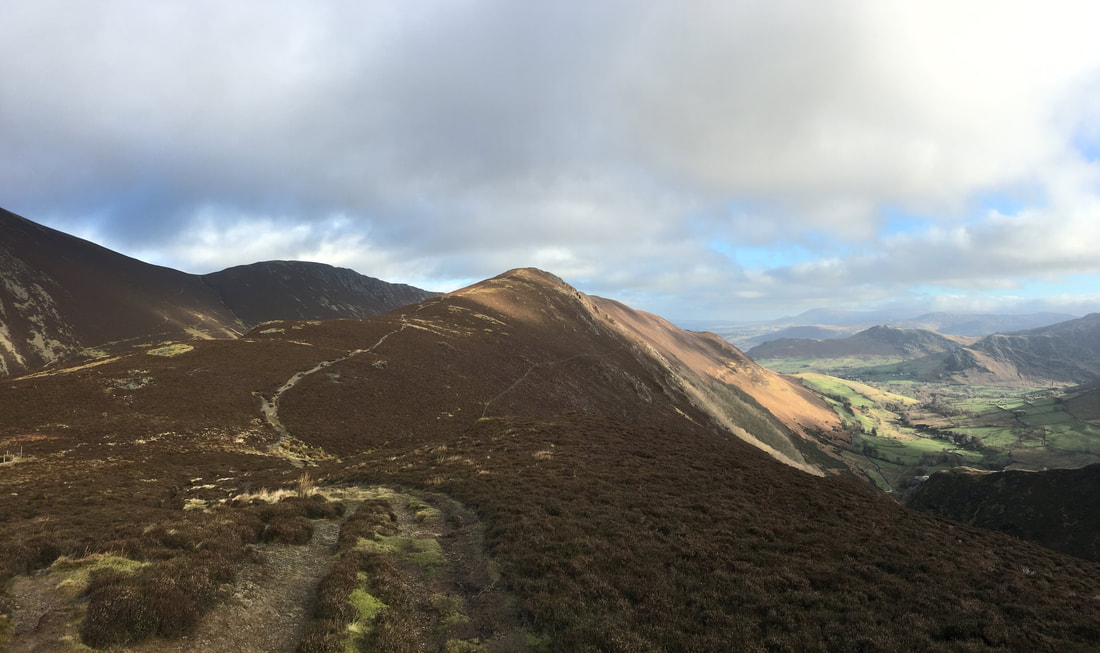 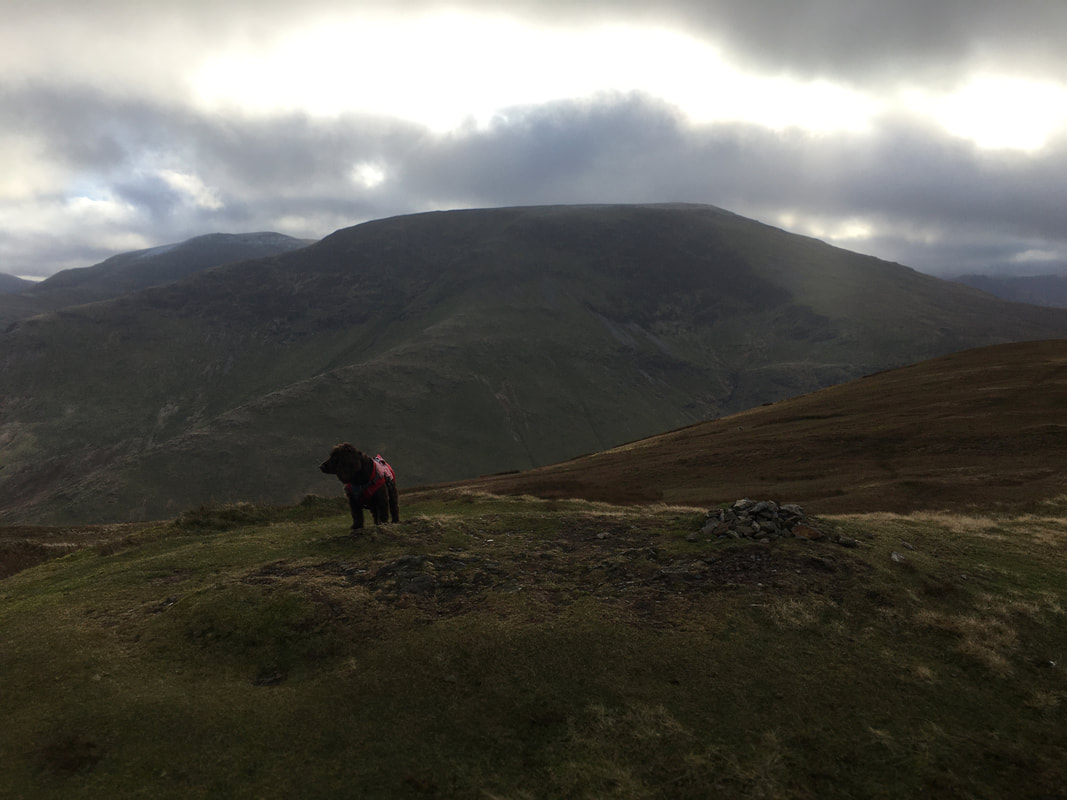 The summit of Knott Rigg looking to Robinson 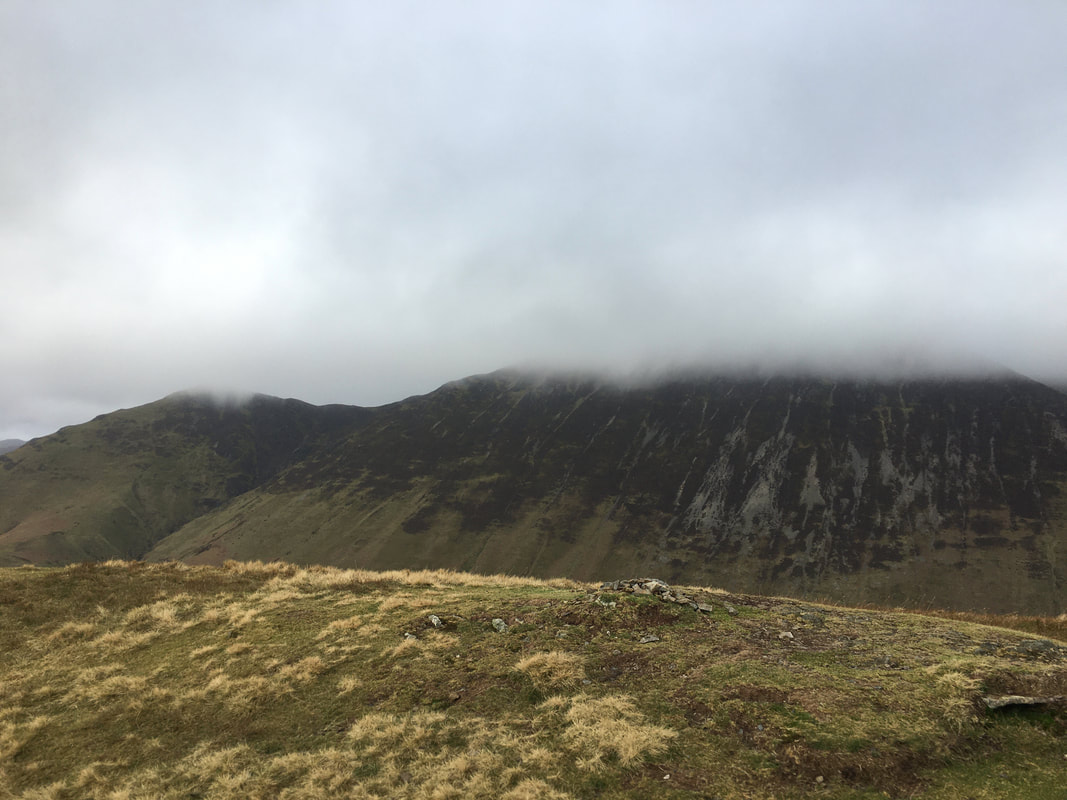 Wandope from the summit of Knott Rigg - today was not a day for photography unfortunately. Whilst he may have appeared grumpy, cantankerous & solitary, Wainwright did have a sense of humour. When speaking of the visibility of Knott Rigg by persons from afar he had this to say:

"An advantage of solitary travel, on the fells greatly appreciated by all lone walkers, is the freedom to perform a certain function as and where one wishes, without any of the consultations and subterfuges necessitated by party travel. The narrow crest of the Knott Rigg ridge is no place for indulging the practice, however, whether alone or accompanied, walkers here being clearly outlined against the sky and in full view from two valleys. This comment is intended for males particularly. Women (according to an informant) have a different way of doing it. ​
​(Knott Rigg 3) 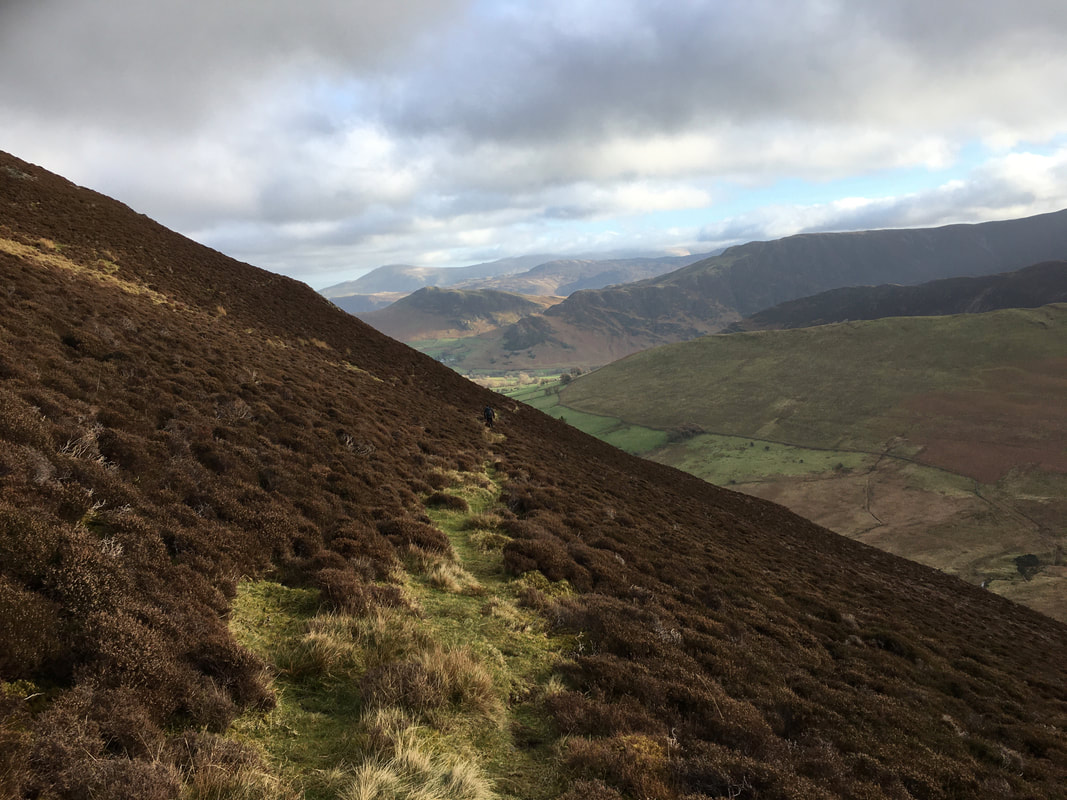 Looking to the Newlands Valley from the descent of Knott Rigg.
There are two routes of descent back to Rigg Beck with both merging together just above Keskadale Farm. The first route stays high along the ridgeline to the left with this second route (known as the drove road) heading along the lower flank of Knott Rigg. 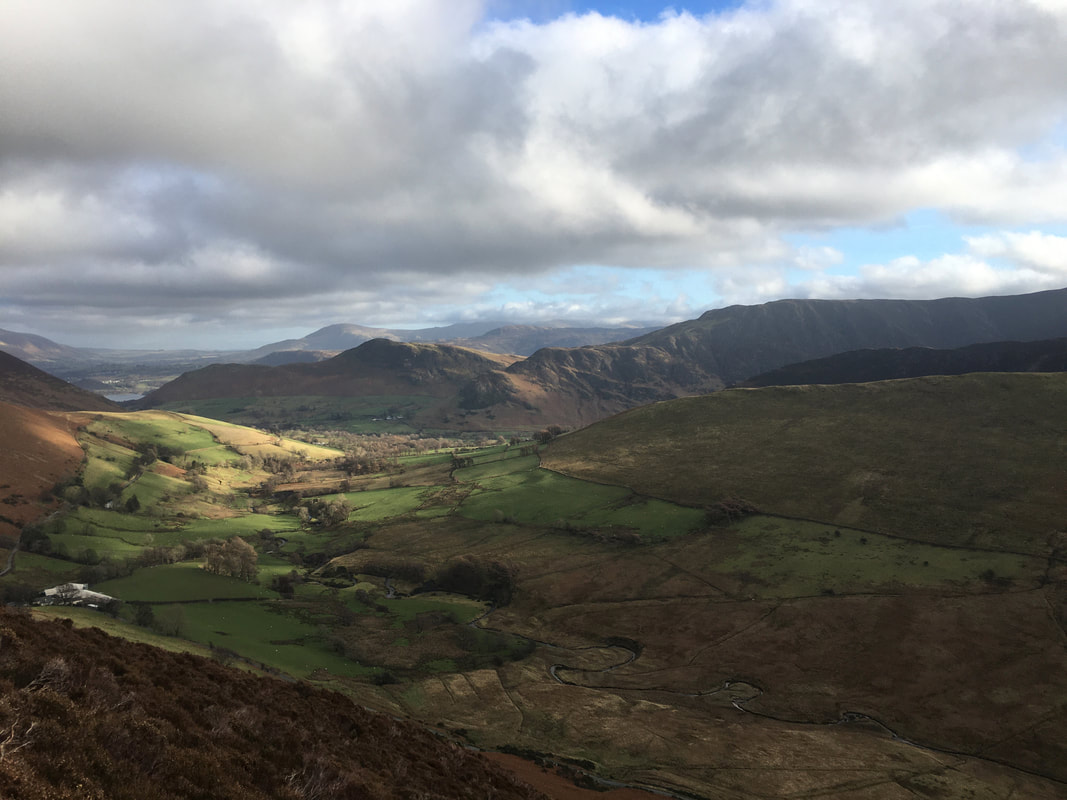 The Newlands Valley with our objective of Keskadale Farm below left. Clough Head is in the far distance with Cat Bells & Maiden Moor in the foreground. 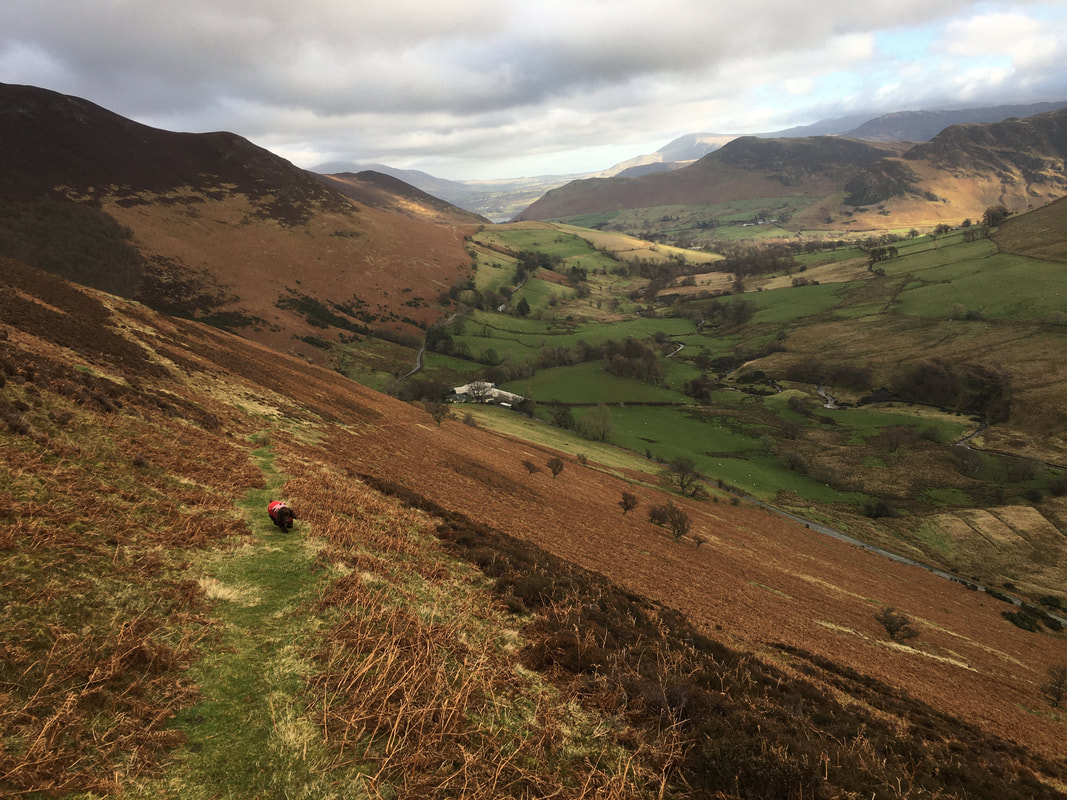 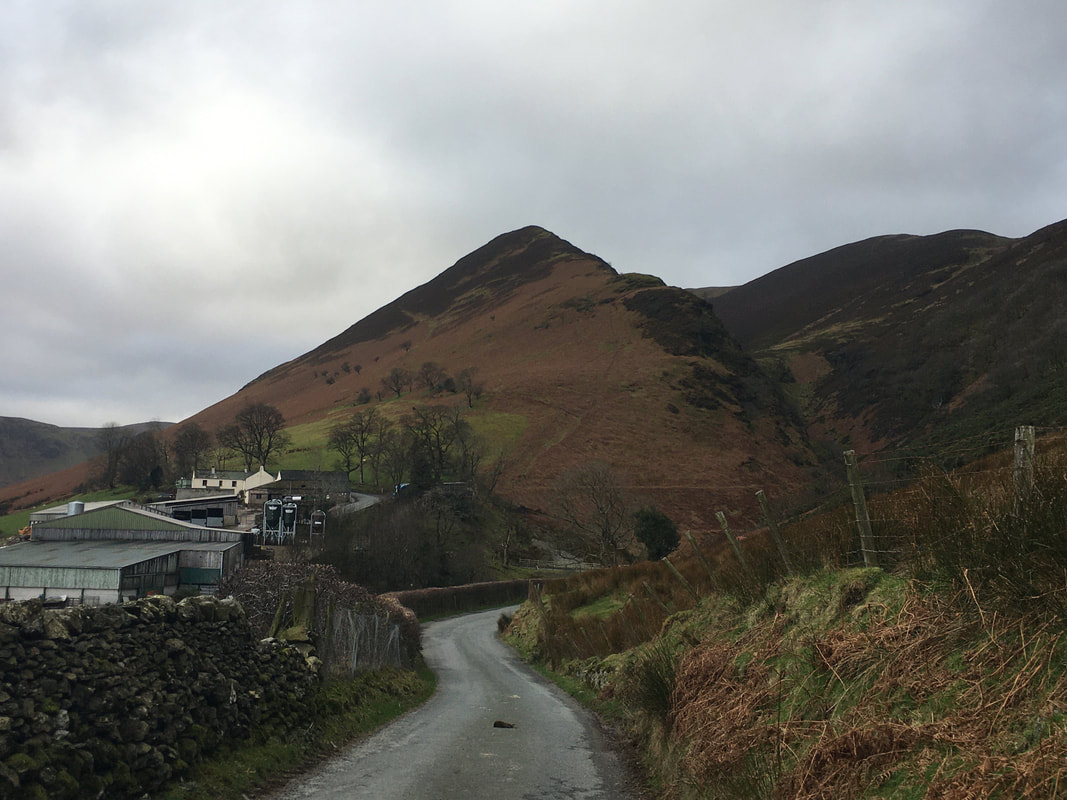 Our descent of Knott Rigg from Keskadale Farm.
The two routes of descent mentioned earlier can clearly be seen - our route is to the left with the ridgeline to the right 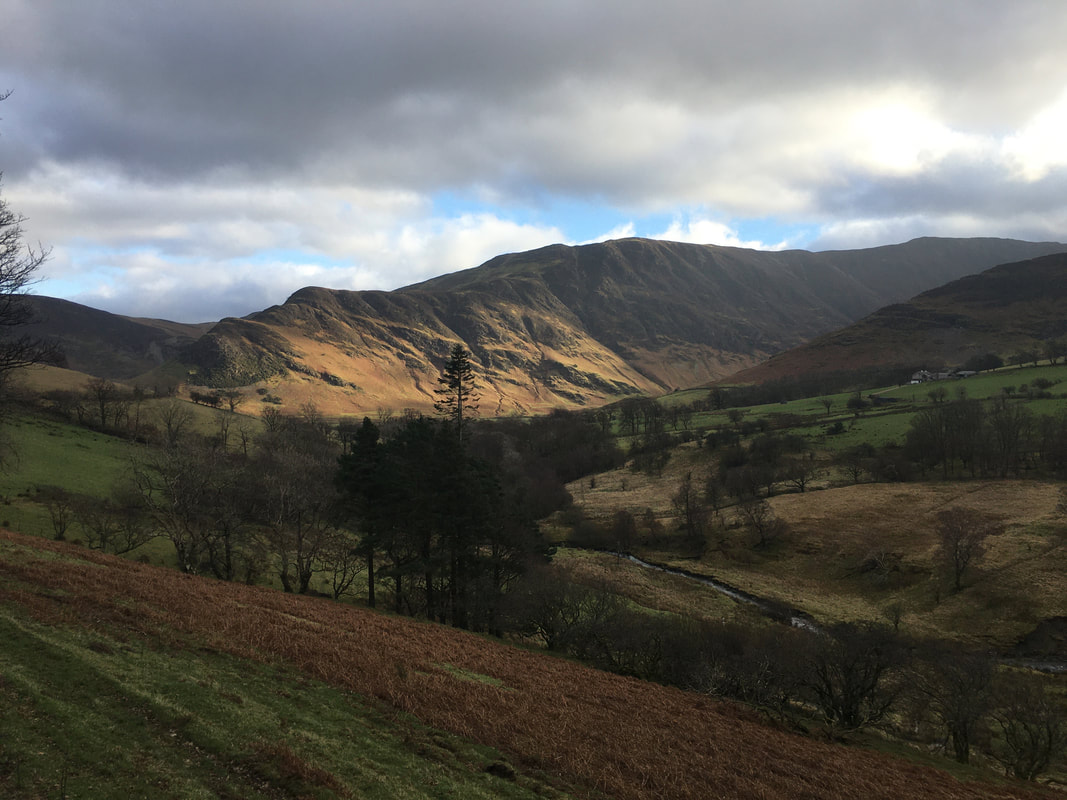 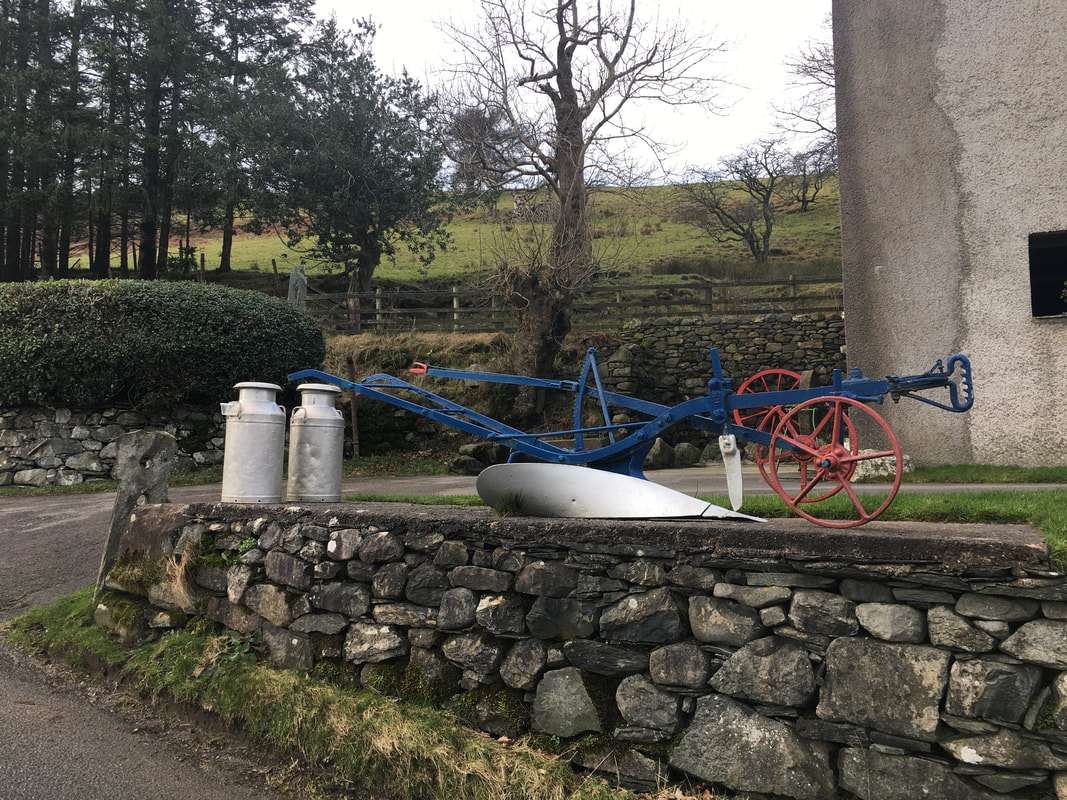