​Awoke to perfect walking weather - sunny & warm with light breezes. Last nights final check of our kit revealed a Water Bottle blow out therefore Dave wandered into Minehead to source a spare. A nice short day with which to start this wonderful journey and today would also see how we would fare with heavy packs. With a hearty breakfast inside us we walked the 400 or so yards back to the start from the B&B in order to take the obligatory photographs - therefore at 1000 and after a few token snaps we were off. Shortly after the Woodcombe & Bratton turn off we had a decision to make - whether to take the usual path or the alternative "Rugged" route which is the more coastal of the two. Whilst this path is described as rugged, to be honest it isn't really.

Reaching Western Brockholes we stopped for lunch and chatted to 2 chaps from Barnstaple who were walking the Coast Path as and when they could - today they were off to Porlock Weir. Meeting people on a daily basis who were doing the path in sections would be a common theme. Shortly before Hurlstone Point we caught up with a Dutch couple who we had been following since the Car Park above the Bossington path and as is the norm we stopped for a chat. We then dropped down to the stone marker at Hurlstone Point for Fudge's first Trig Point photograph - here there are lovely views down to Porlock & Porlock Weir. Arriving in Bossington we were looking forward to a bit of cake at Kitnors Tea Shop but could not believe that on a sunny May afternoon that it was well & truly shut. With many paths into Porlock we stayed with the route and left the path to walk into the village via Sparkhayes Lane.

We were a little early to check in at our B&B therefore enjoyed a nice pint of Wildsider in The Top Ship, before wandering over the road to Myrtle Cottage to check in. After a lovely welcome from our host Janet we sorted ourselves out and then ventured out in search of food. The Royal Oak in the village provided us with a very pleasant, if not dry Lasagne and after a quick top up of supplies from the Costcutter we headed back to our B&B for a kit sort out and an early night. Today was a relatively easy day of just under 10 miles and was a nice lead in with the heavy rucksacks - with a longer day tomorrow it would be interesting to see how the heavy weight would feel after more mileage and ascent. 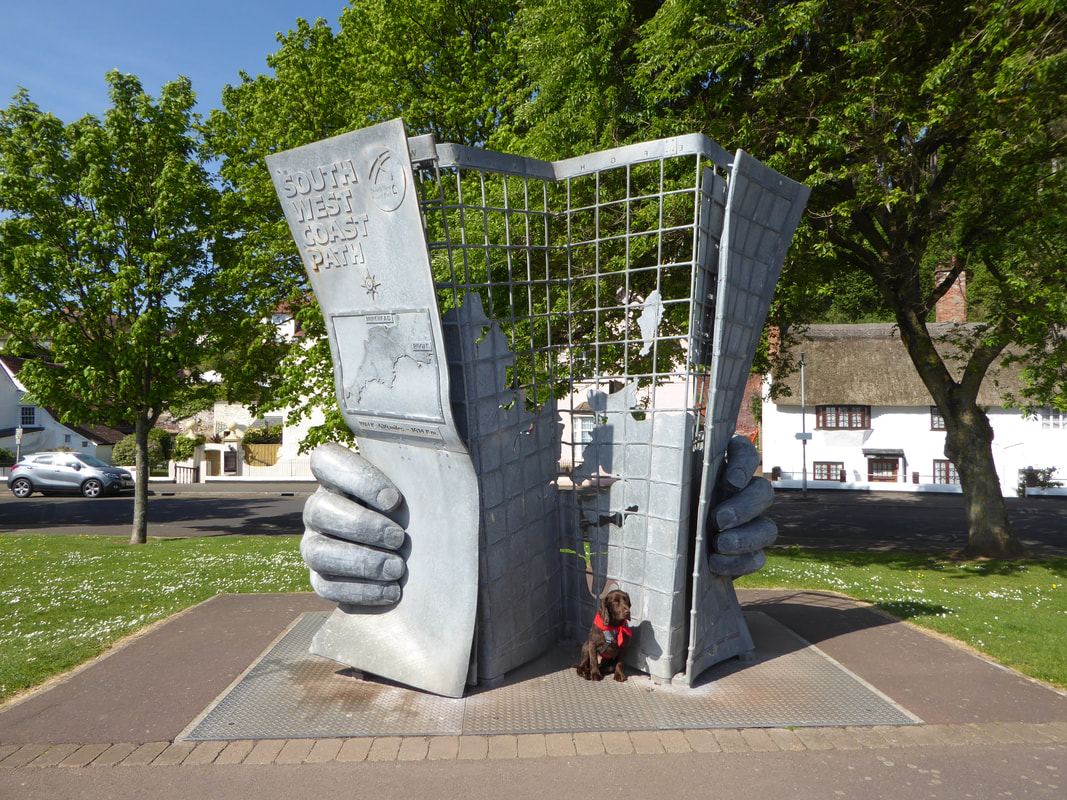 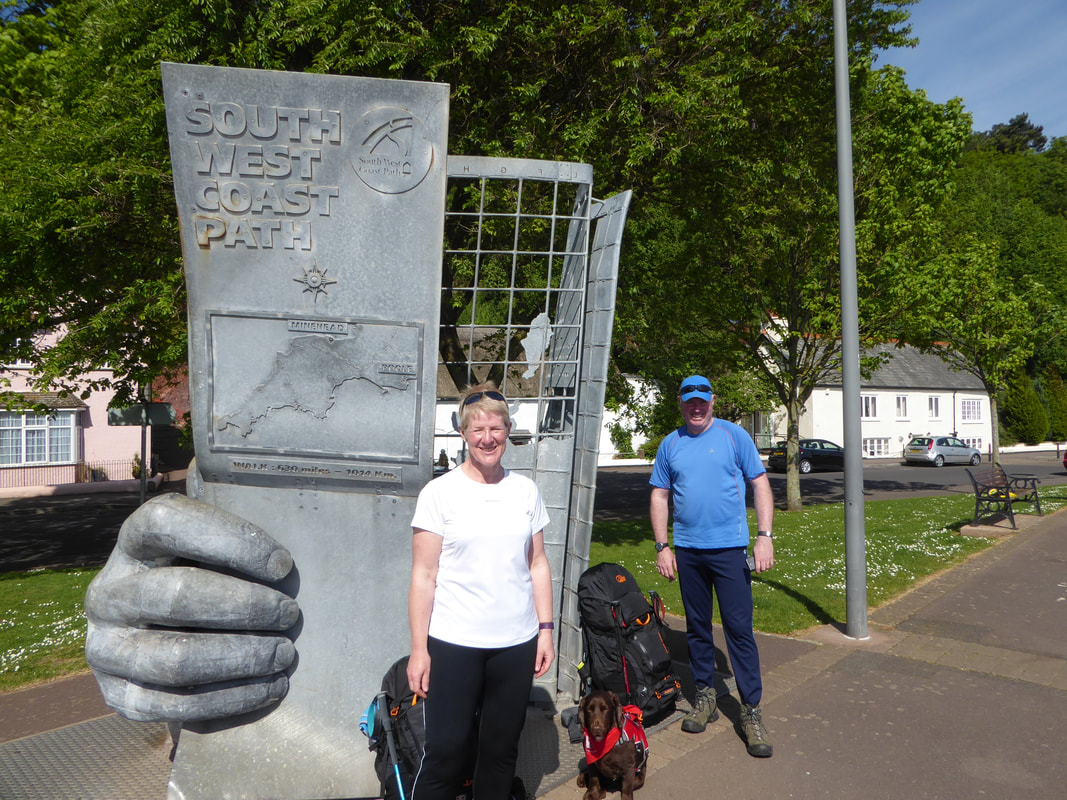 The planning done - this was it.  Really looking forward to this 54 day epic.
​Who would we meet, what would we see & would we last the course??  Read on to find out! 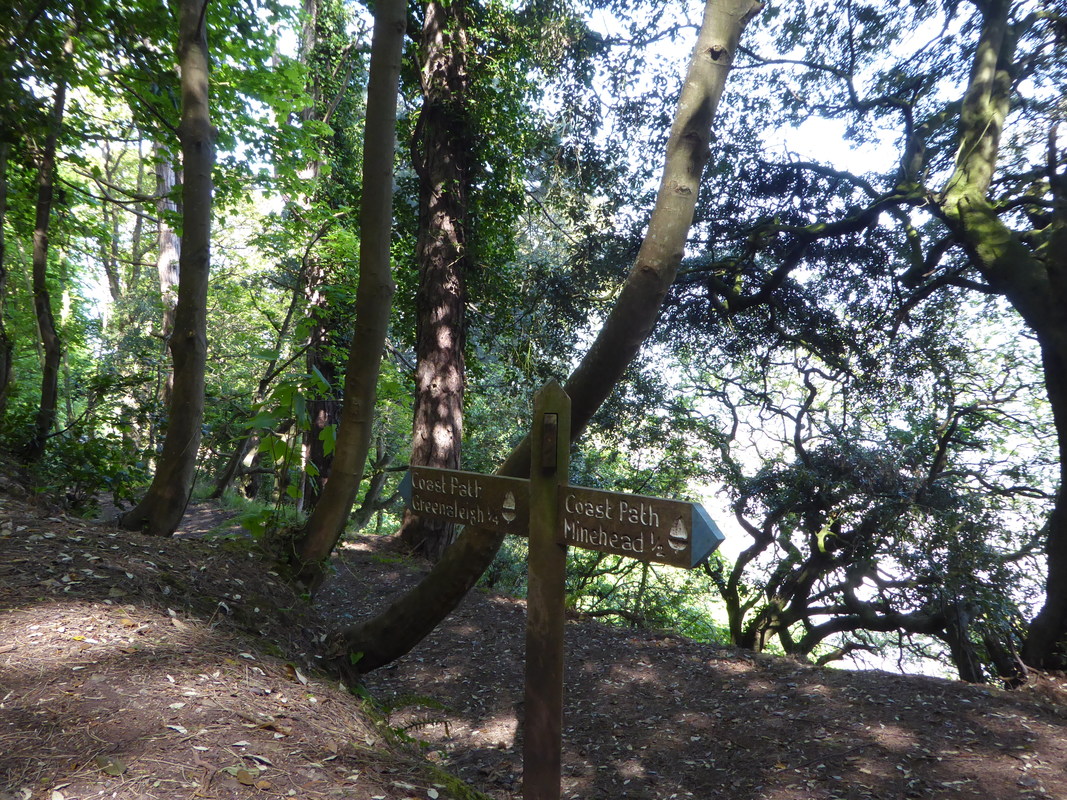 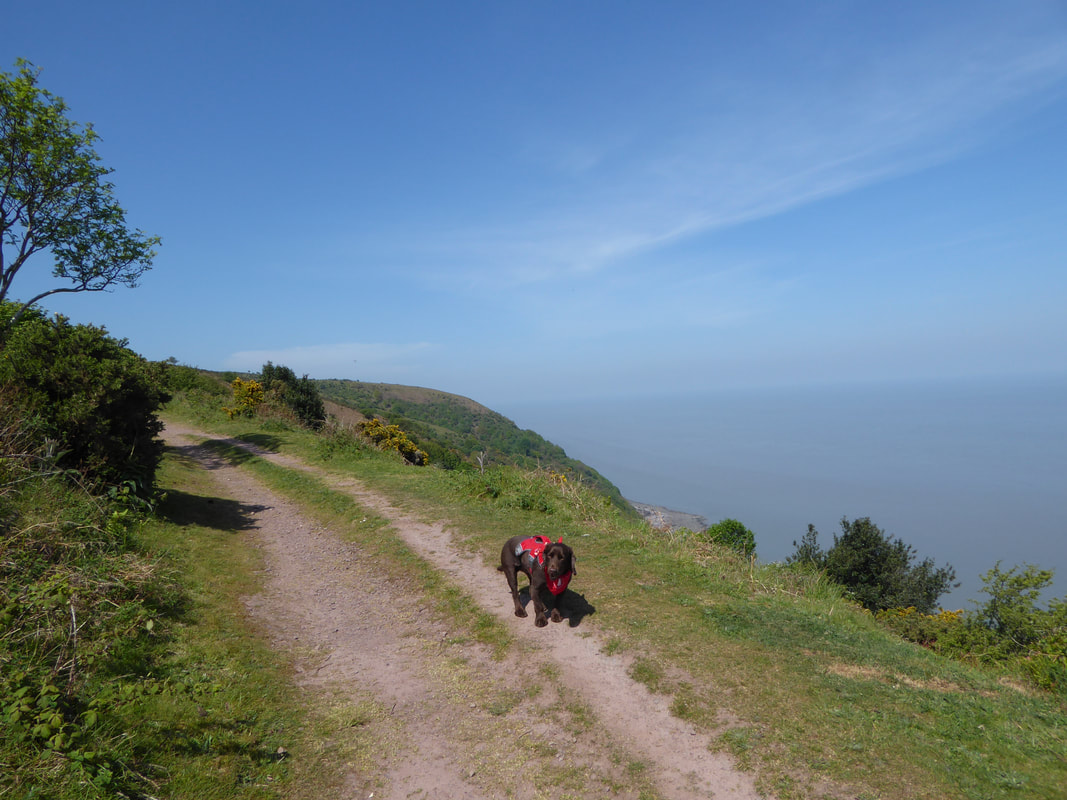 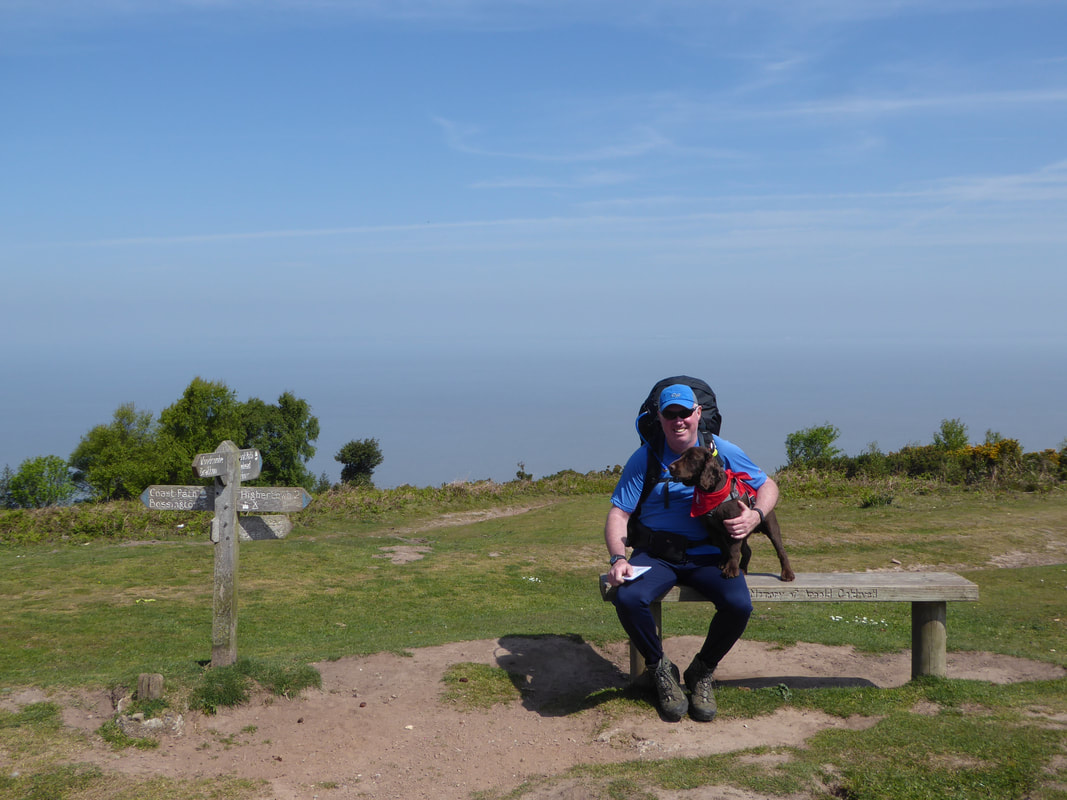 With Fudge at the Woodcombe & Bratton turn off.
We were heading towards Bossington but would soon need to decide whether or not to take the rugged path or the main route 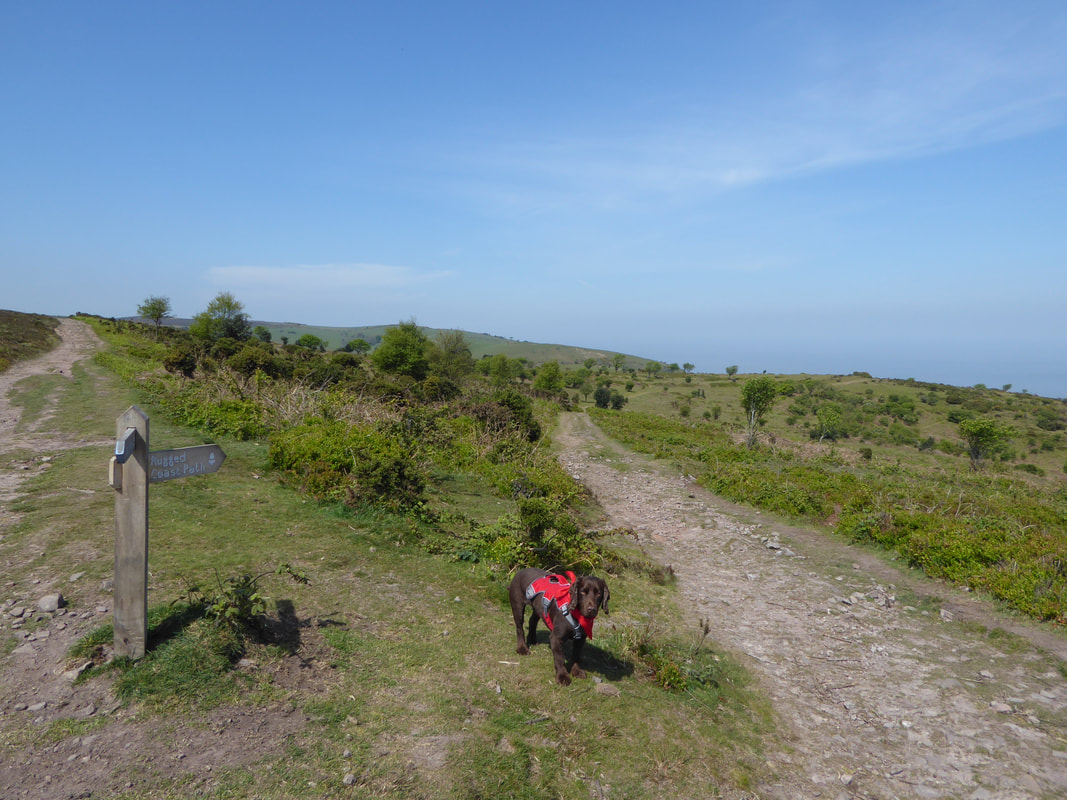 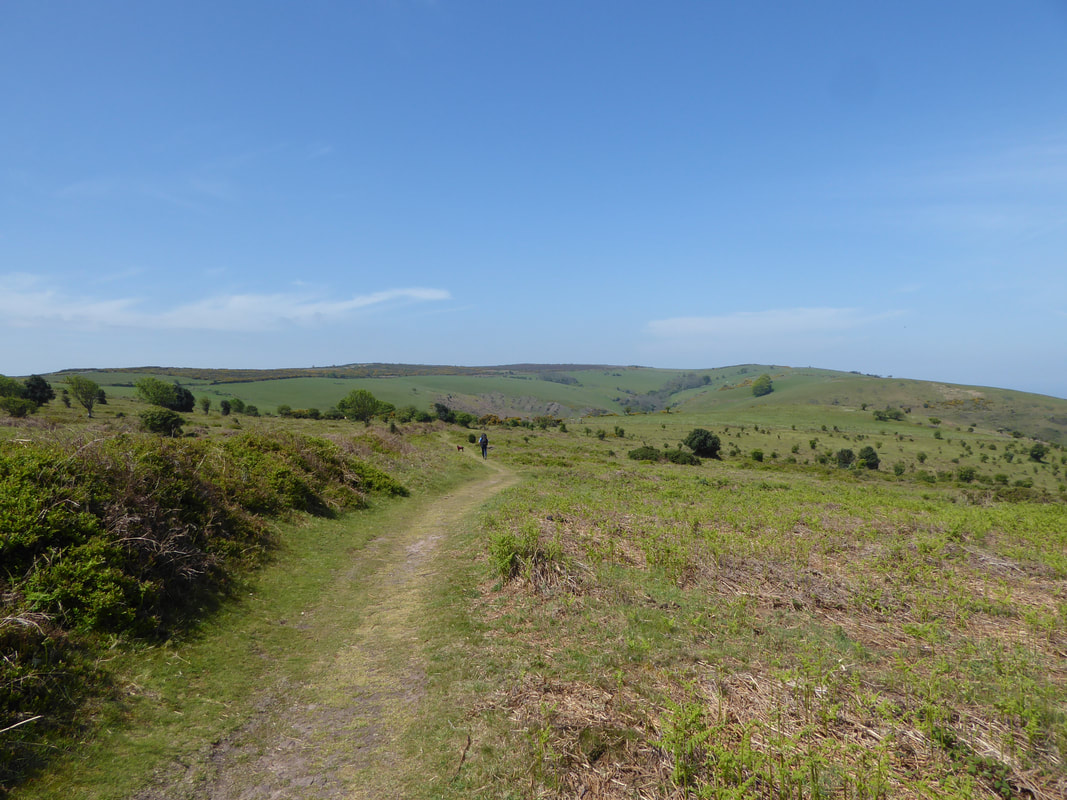 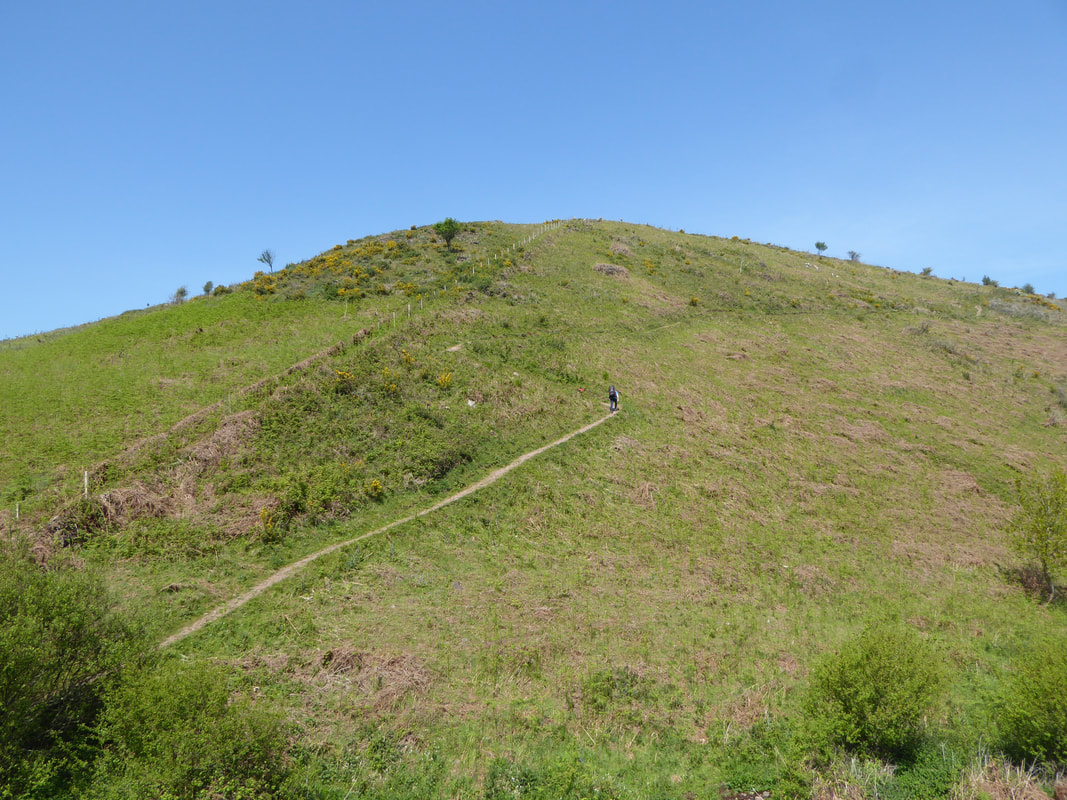 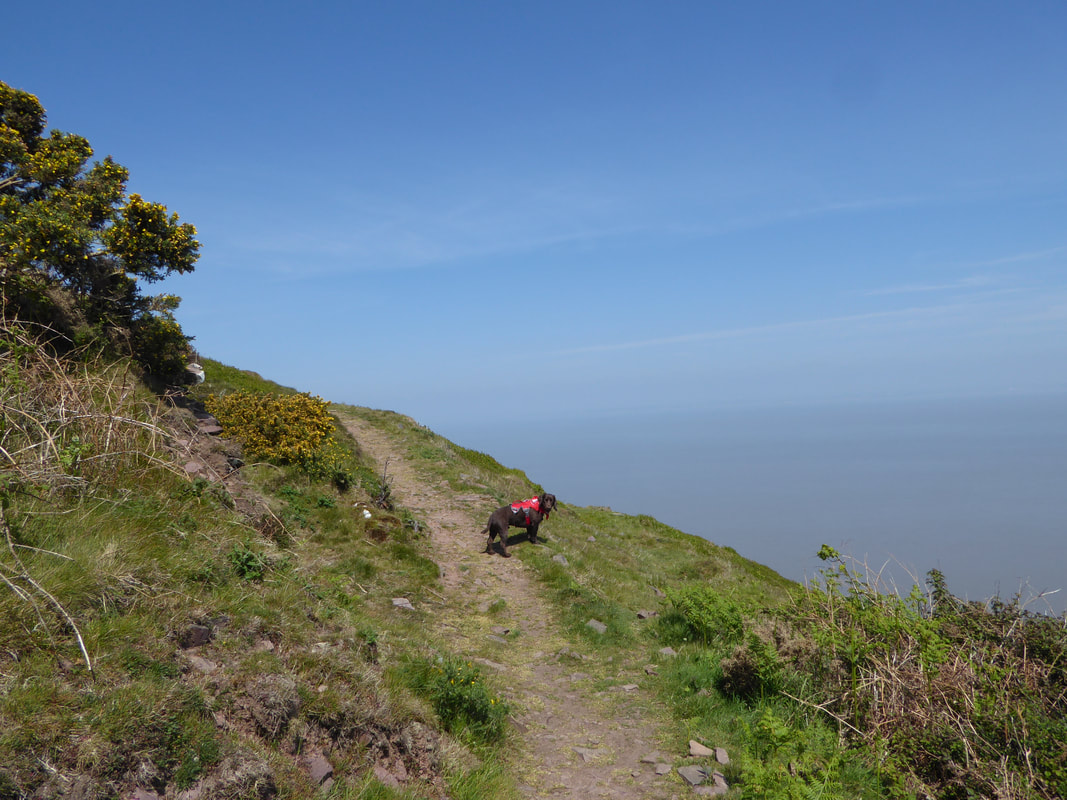 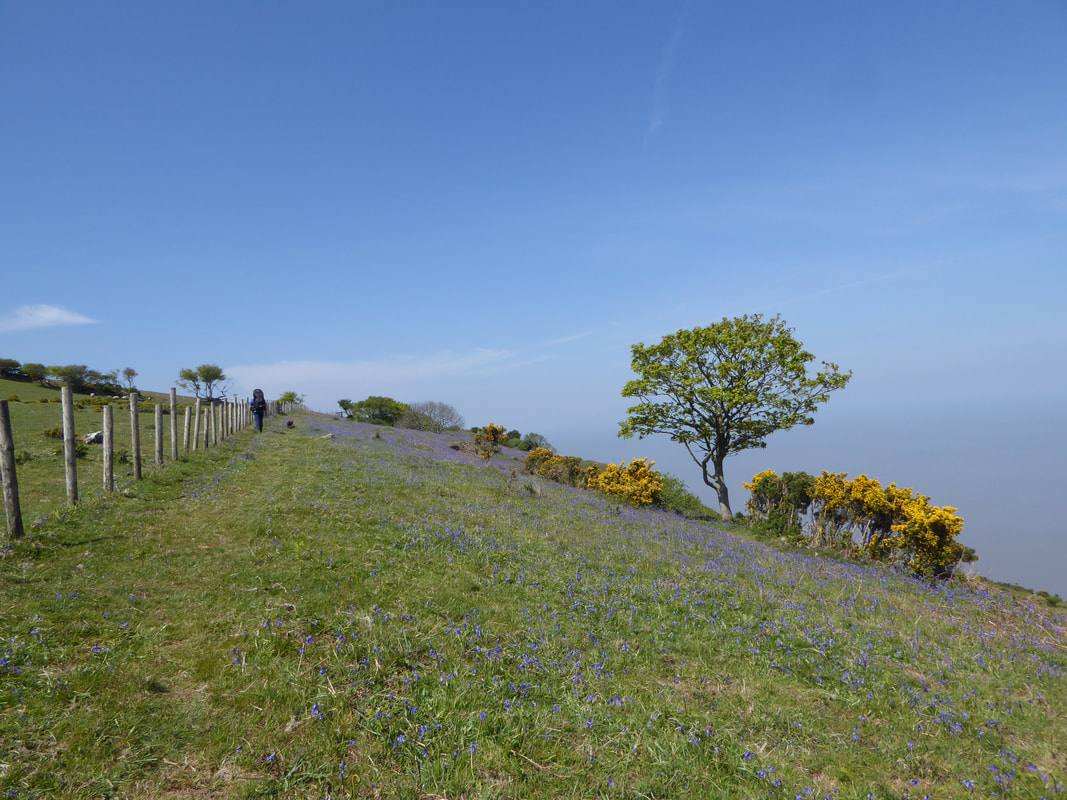 Lovely walking amongst the Bluebells 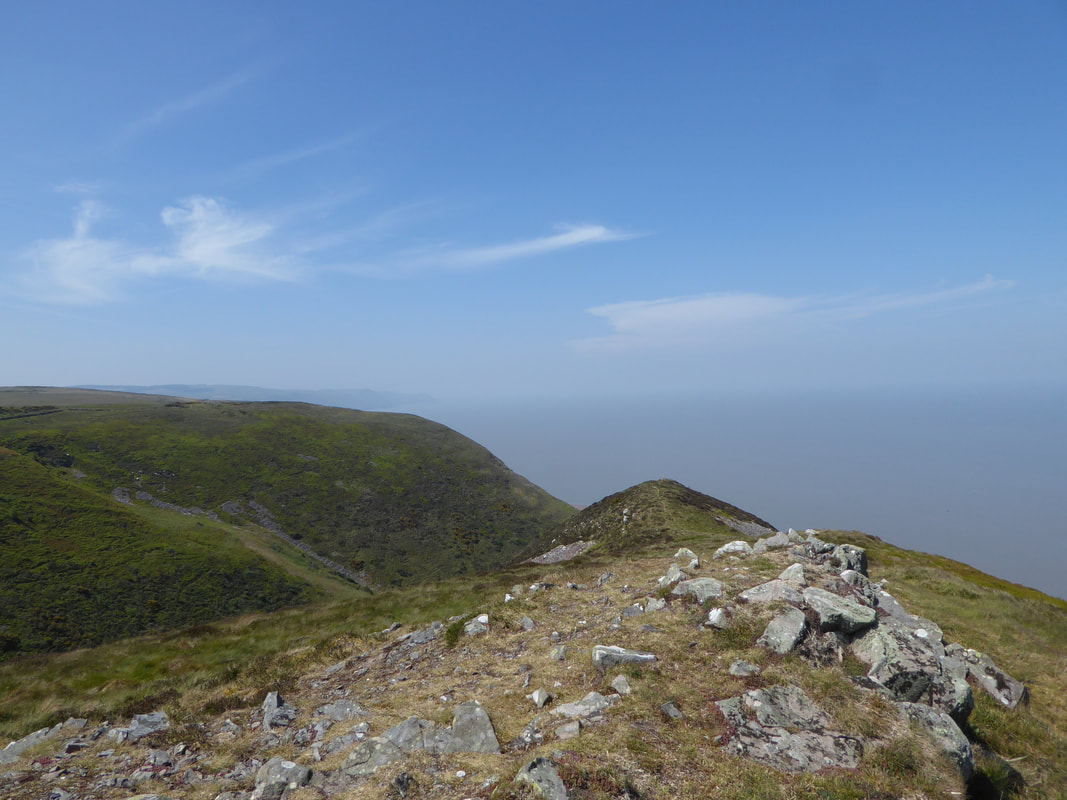 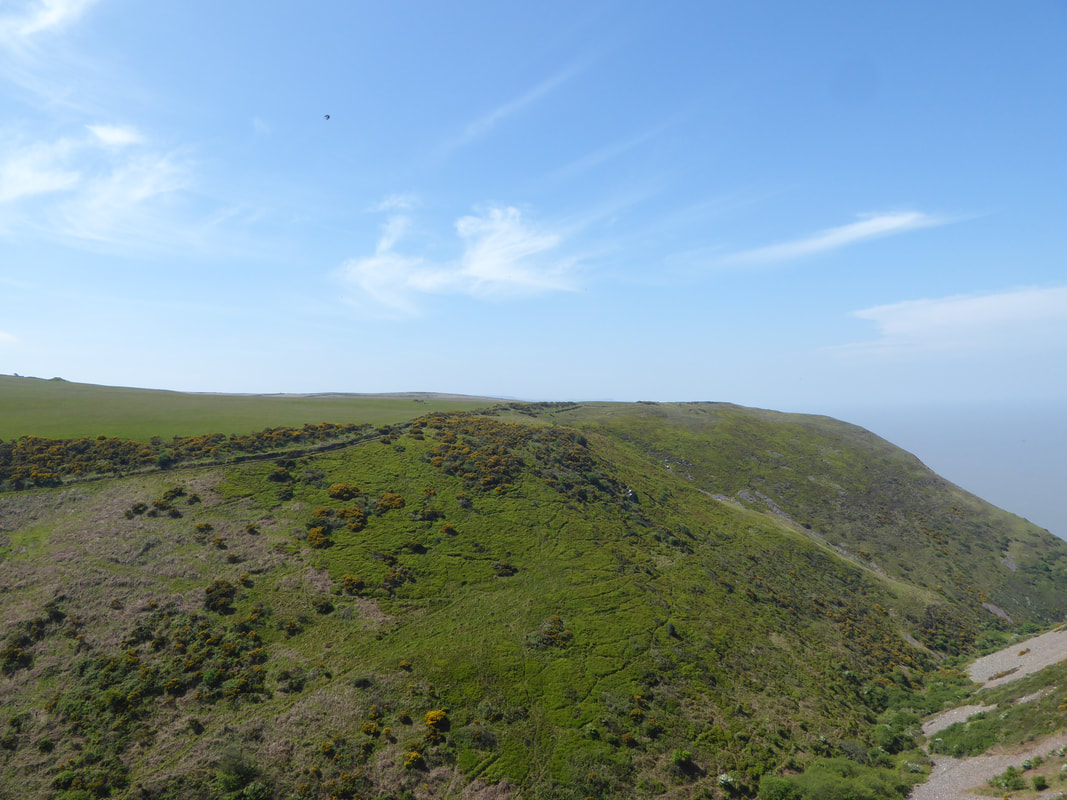 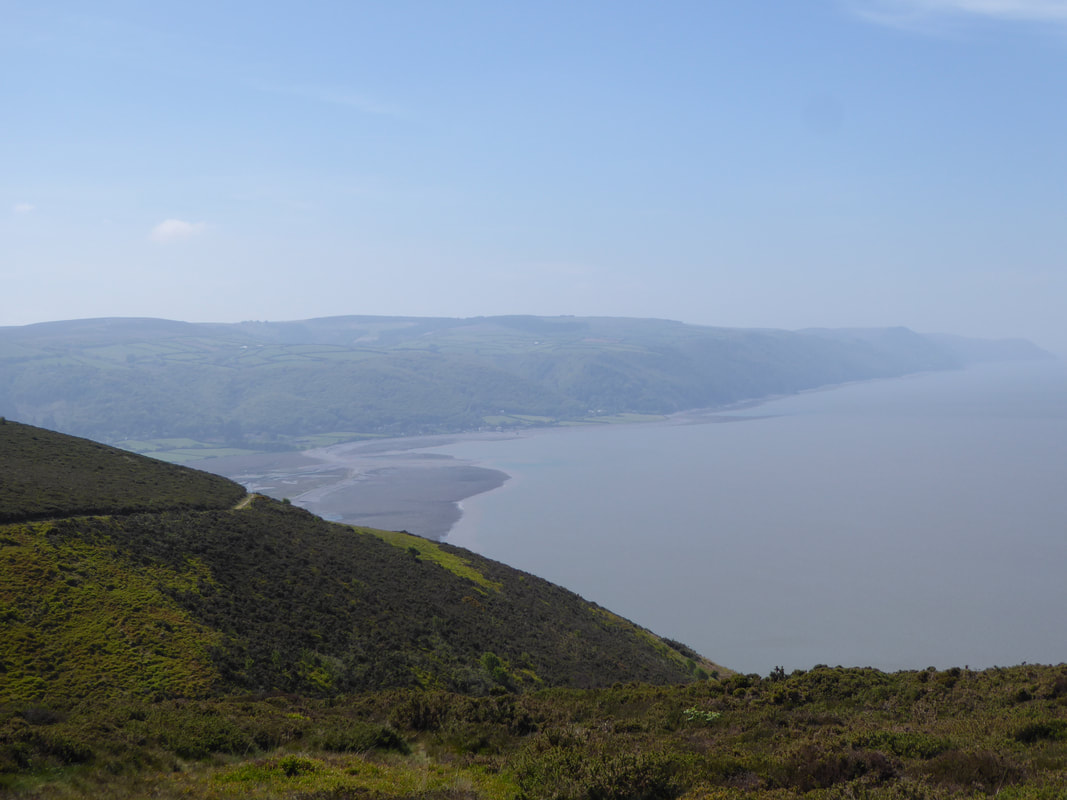 A hazy one but our first view of Porlock Weir 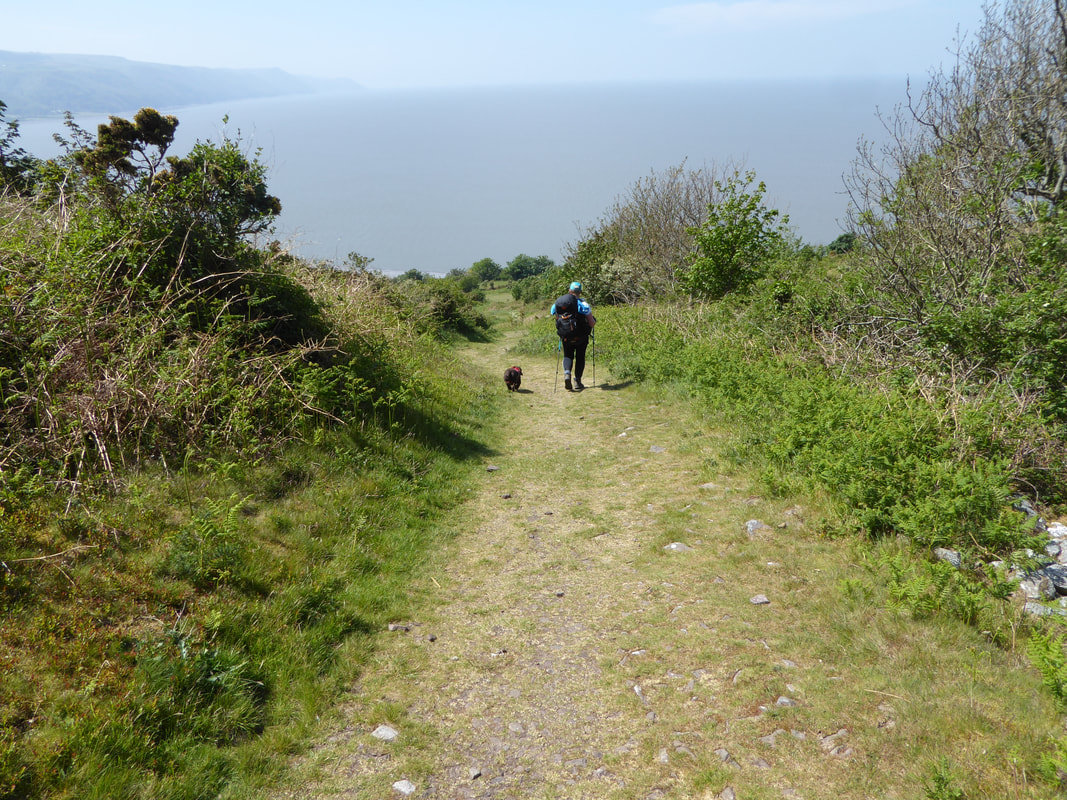 The steep descent towards Hurlstone Point 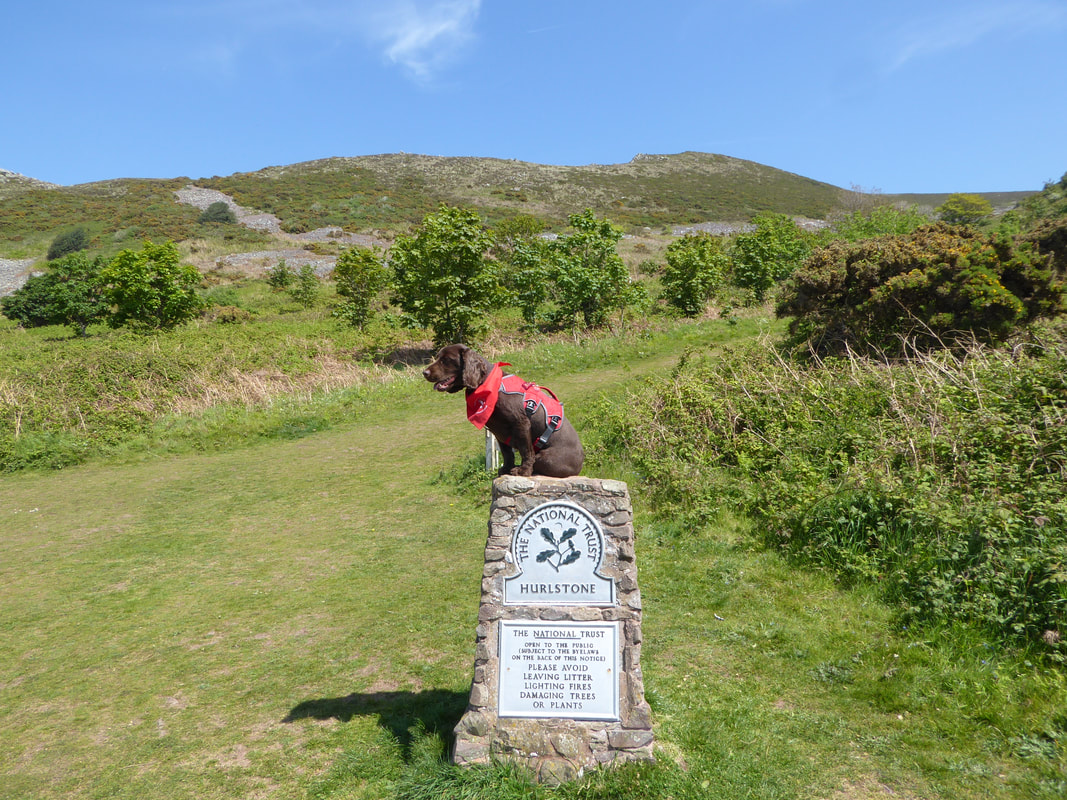 As is tradition, Fudge up on the NT marker near Hurlstone Point - the first of many on this trip 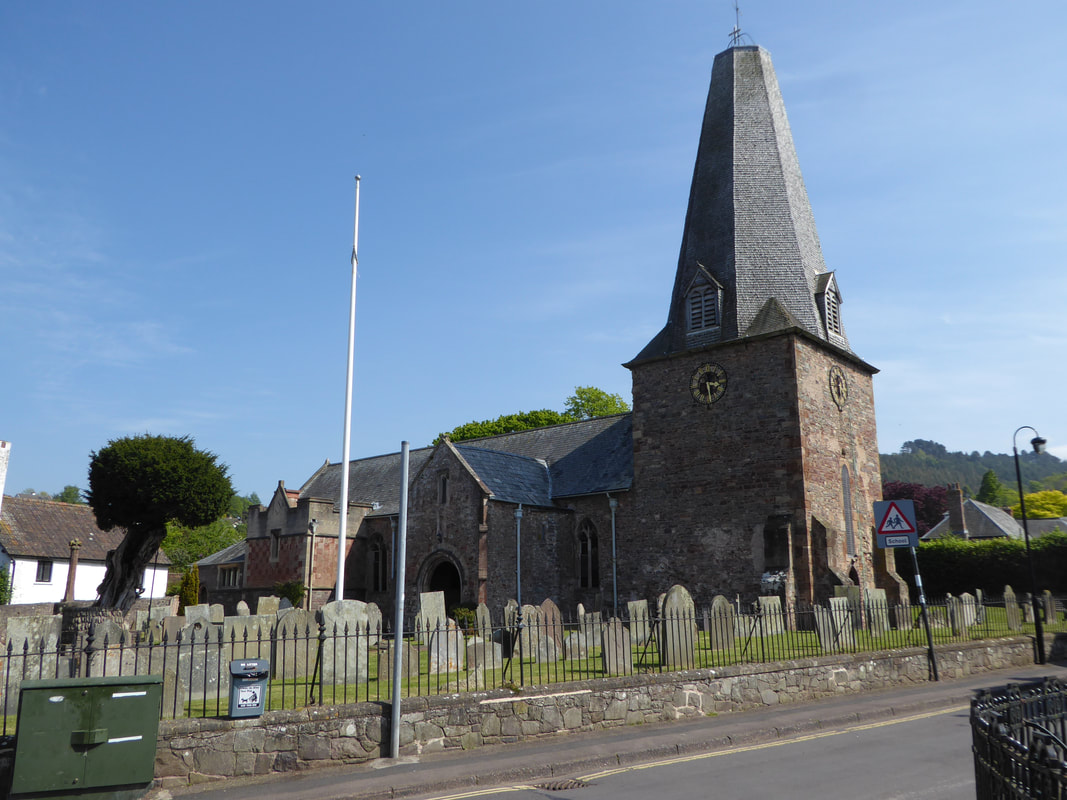 Church of St Dubricius, Porlock.  The church dates from the 13th Century. 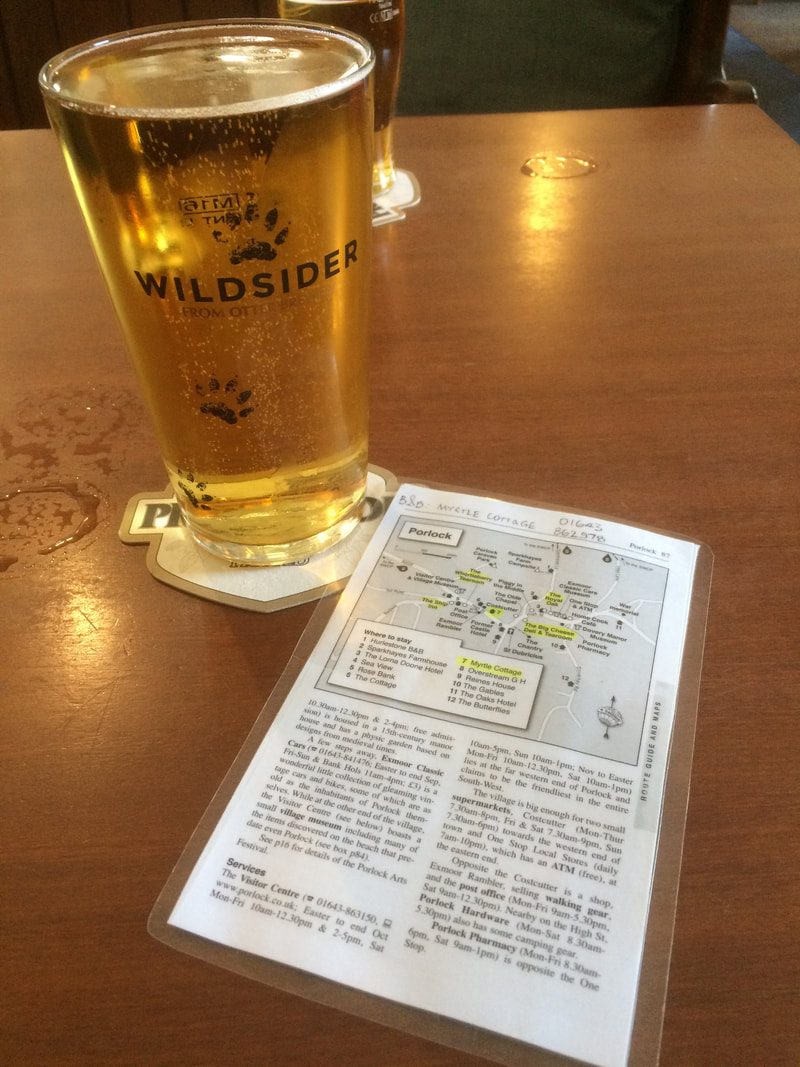 A lovely pint of Wildsider in The Top Ship at Porlock - it was so good we had to have another one. 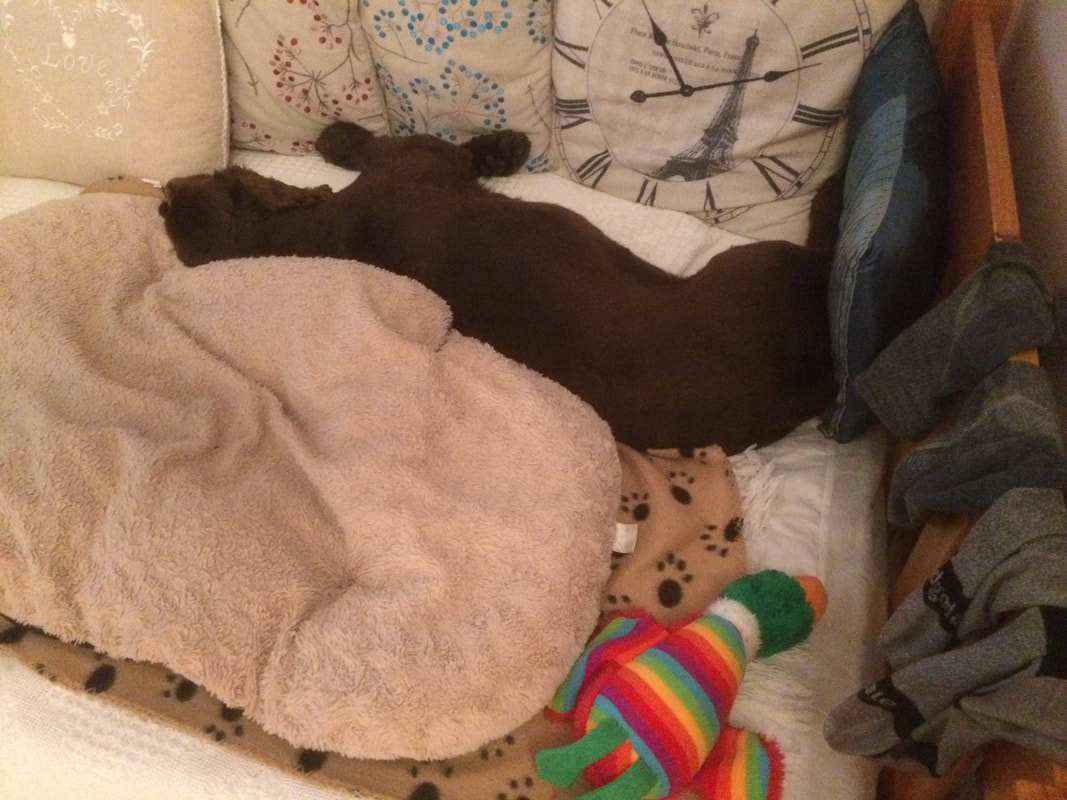 Knackered - and he wasn't even carrying anything! (or had our socks knocked him out?)
Overnight Accommodation 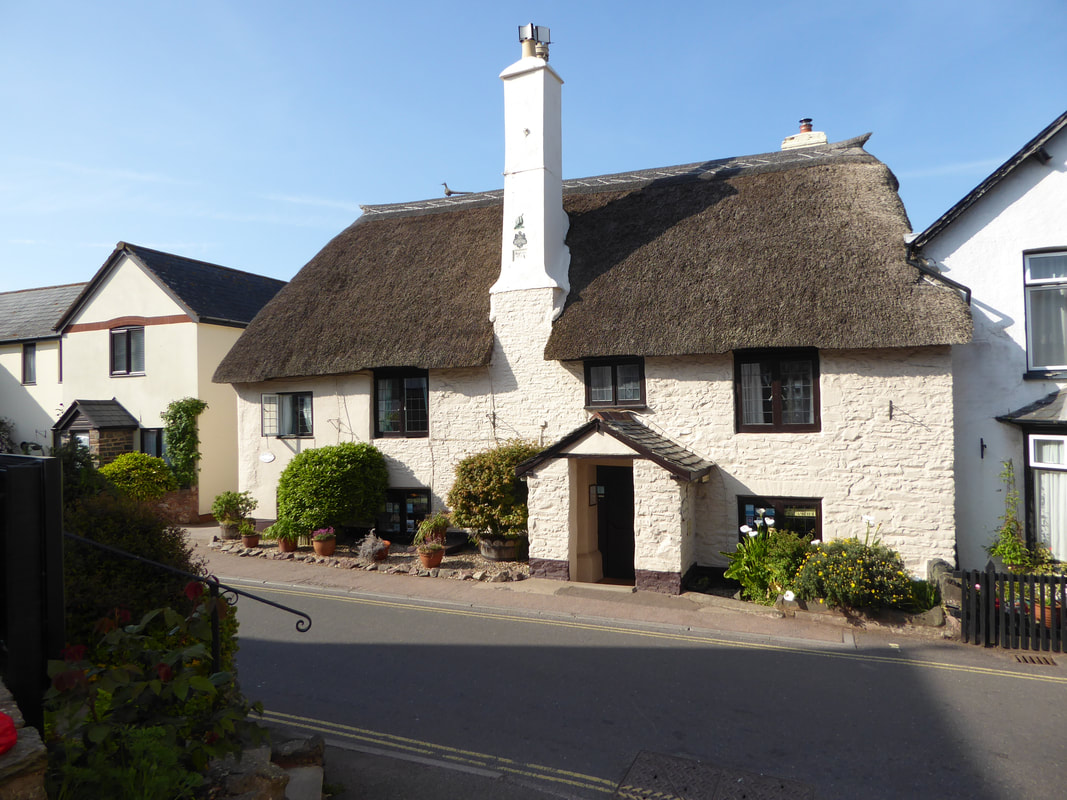