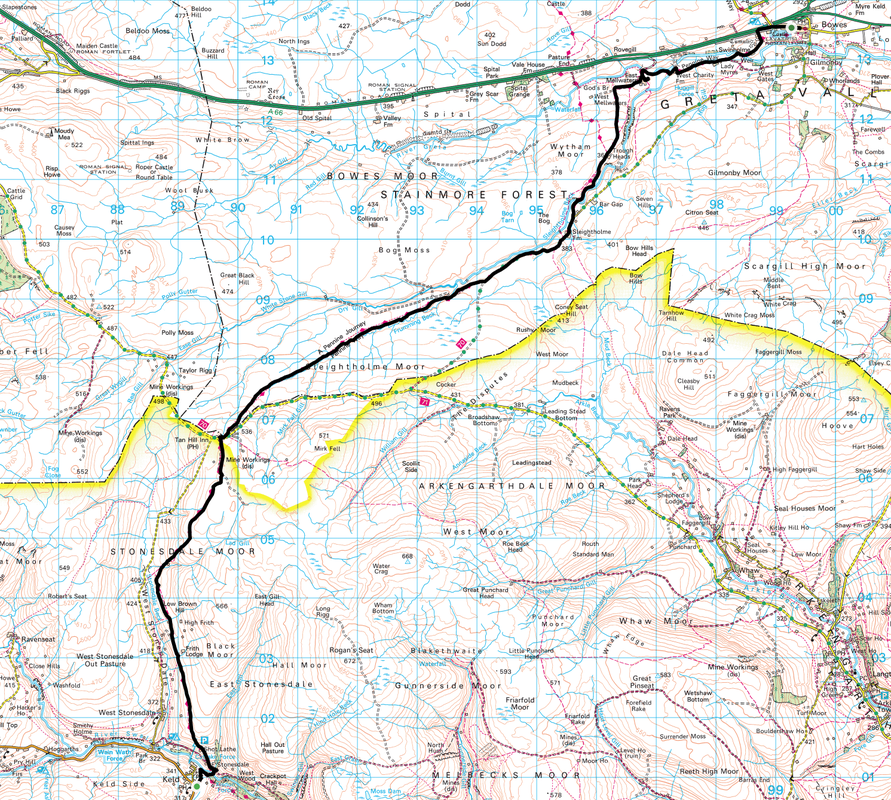 We awoke to a miserable and overcast morning and someone had turned on a wind machine. It was going to be a blustery morning according to the weather report and unfortunately for us we were out on exposed moorland for most of today - at least it wasn't raining! Breakfast was a noisy affair with the 7 Coast to Coasters excited about their walk over to Reeth and we felt a pang of jealously as they chatted about their walk camaraderie - unfortunately The Pennine Way is not as popular as the Coast to Coast therefore we had hardly seen anybody else who was also walking the route. On the Coast to Coast there is the opportunity to meet lots of people - however we were not complaining as we were enjoying our own company. On reaching Bowes today we would be just about half way through the Pennine Way. 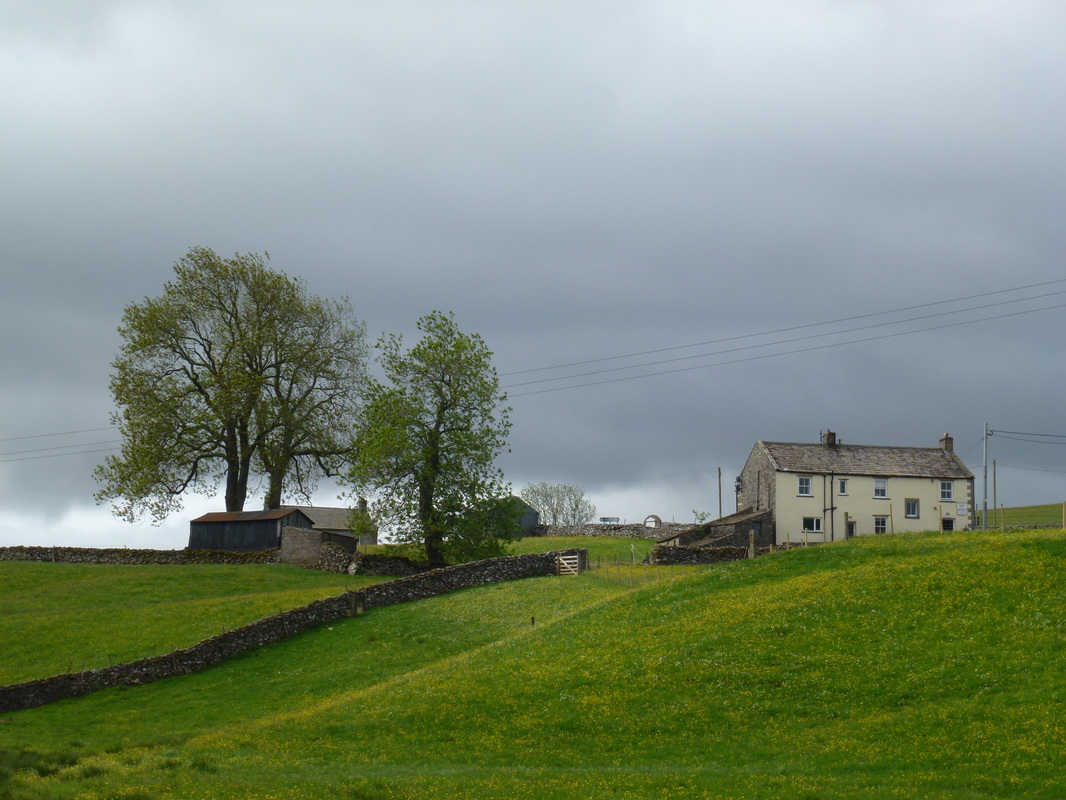 Butt House
Leaving Butt House we walked the short distance into Keld and back down to the bridge over the Swale to rejoin the route.Fudge loves the falls here therefore he had a 10 minute fix swimming about before we took the path up the slope to the farm at East Stonesdale to walk the 4 miles to the pub at Tan Hill. The path continues to rise gently and there are fine views back over to Keld and beyond. From here to Tan Hill the terrain is fairly level yet wet in places and after rain there is an option to walk along the road that runs parallel to the route.​ 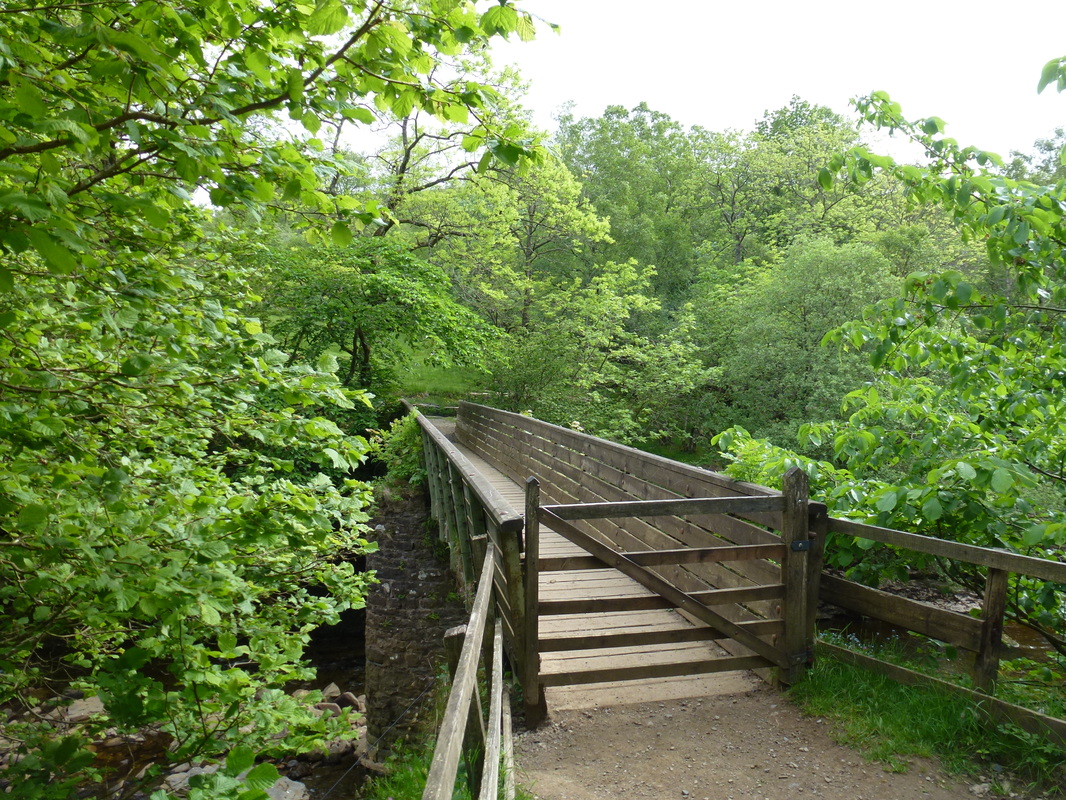 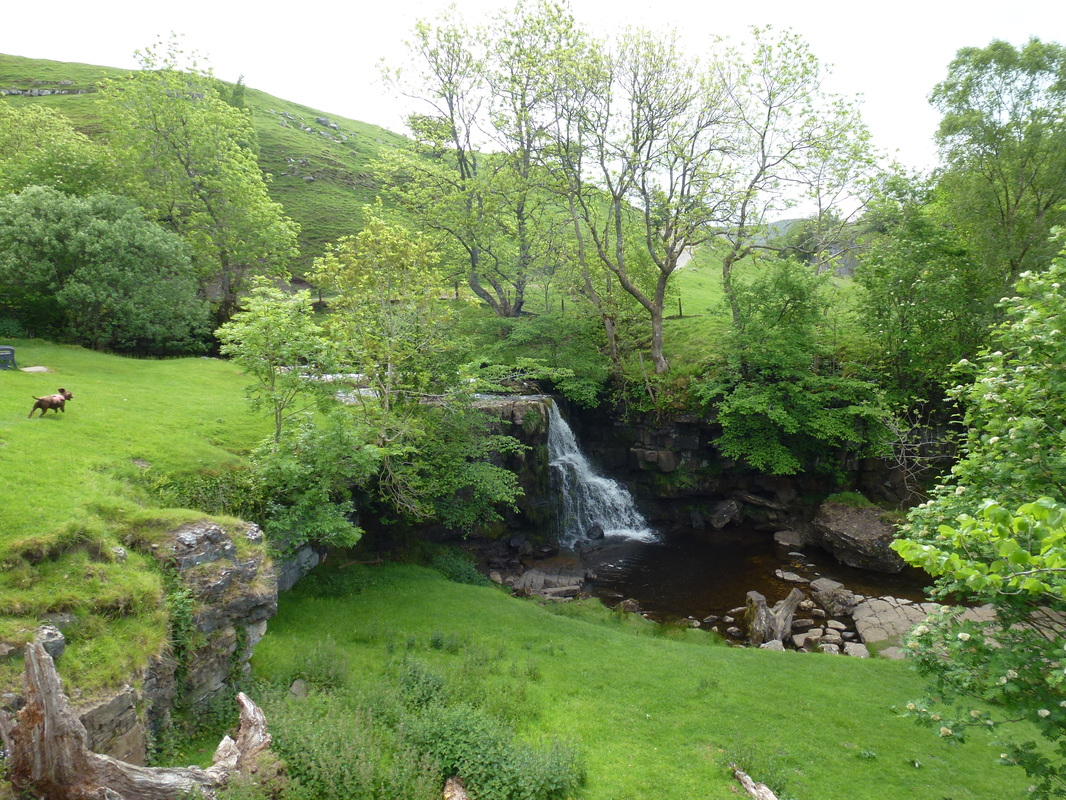 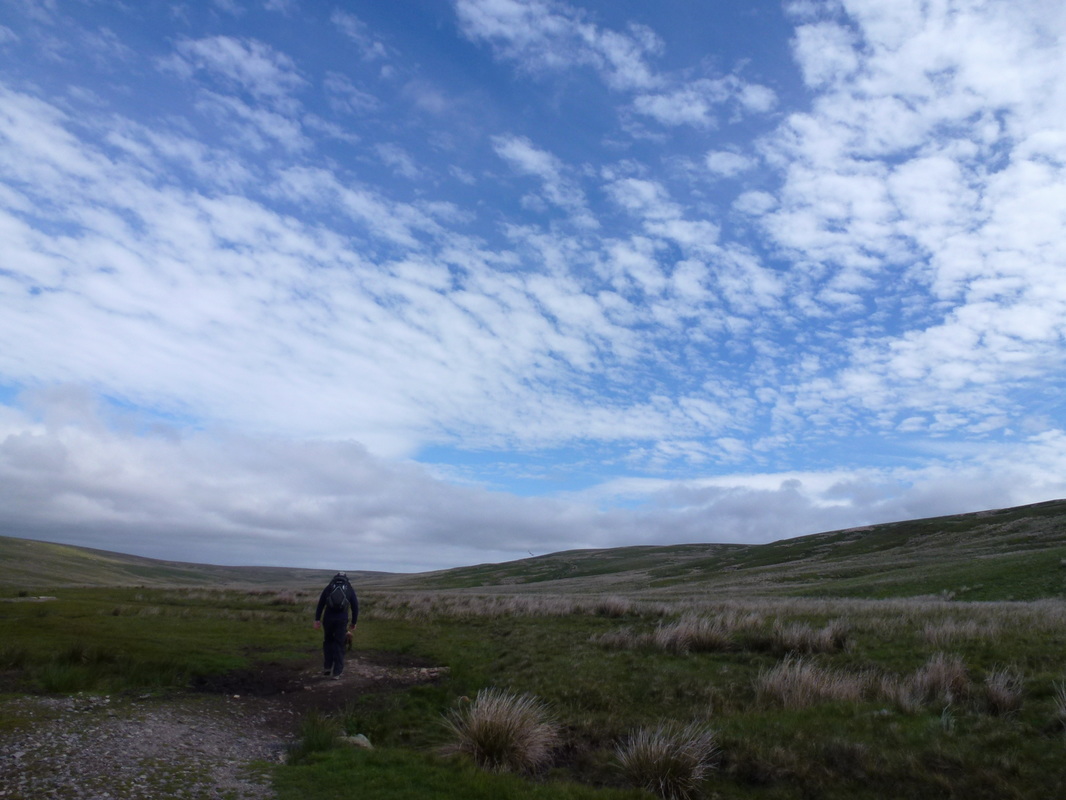 Tan Hill here we come as we head into the wind over Stonesdale Moor - just look at that sky
Crossing Lad Gill by way of a slab bridge there is a view of Nine Standards Rigg apparently although it was a tad too overcast today to see it. The route continued over Stonesdale Moor and eventually the pub at Tan Hill came into view - in the absolute middle of nowhere. We have been here many times and at 1732 feet above sea level lays claim to being the highest pub in Great Britain. Having been battered by the wind over Stonesdale Moor we were glad the fire was lit and we enjoyed a hot drink before braving the elements once more. 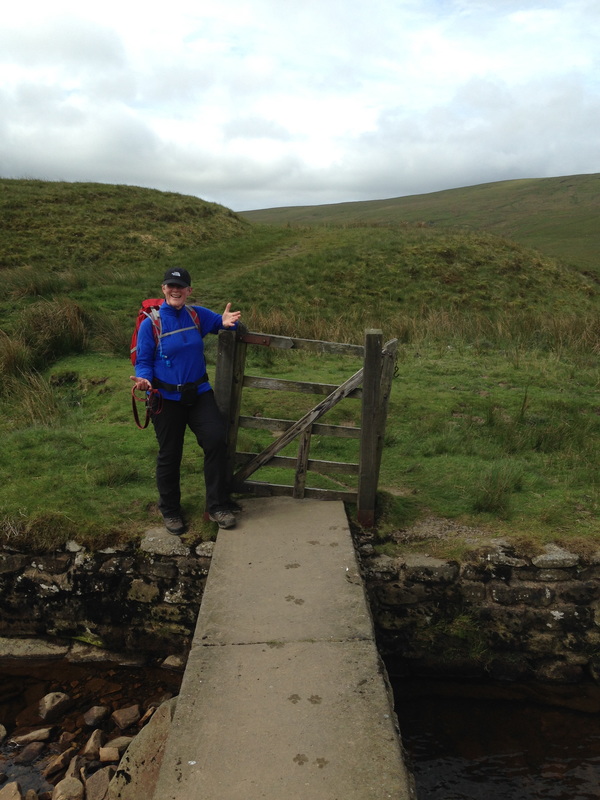 Crossing Lad Gill - as you can see, Fudge had already crossed over! 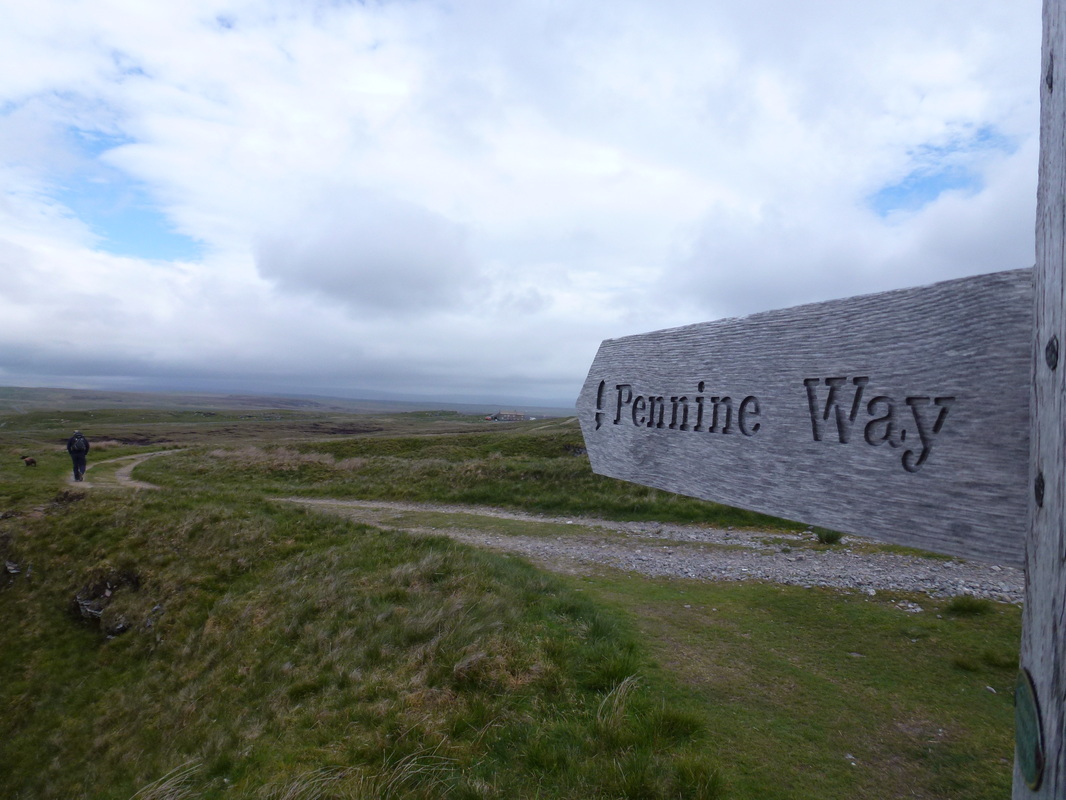 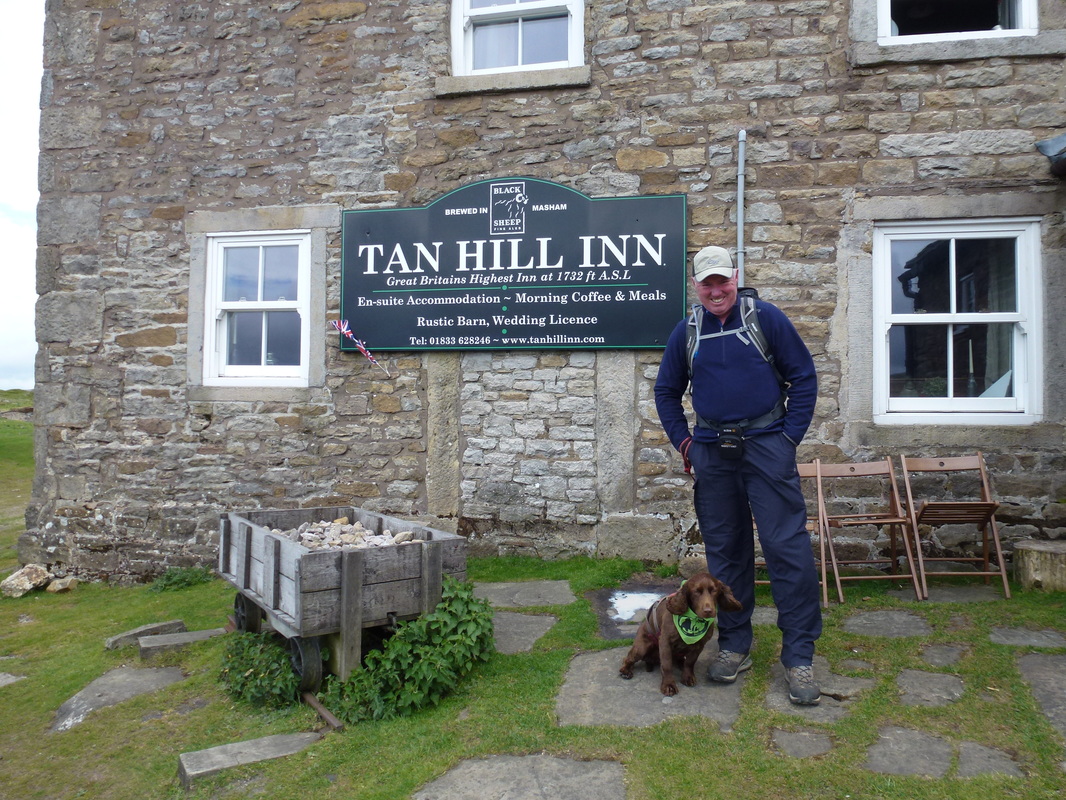 We have been here many times - eccentric isn't the word - that's why we like coming here
From Tan Hill we were on unchartered territory again and we headed out on to Sleightholme Moor which is a well-known bog fest. As it happened it was not too bad today but the moor is featureless and we simply got our heads down and ploughed on over a big load of nothing to eventually walk alongside Frumming Beck to reach the bridge at the meeting with Sleightholme Beck. The wind had abated and therefore we rested a while here and had a bite to eat before crossing the bridge where the route continued on a broad track. After about a mile we left the track to cross the Intake Bridge before reaching Trough Heads Farm. At the farm the route splits - this is called the Bowes Loop and enables those walkers staying in and around Bowes to rejoin the route later at Baldersdale.  ​ 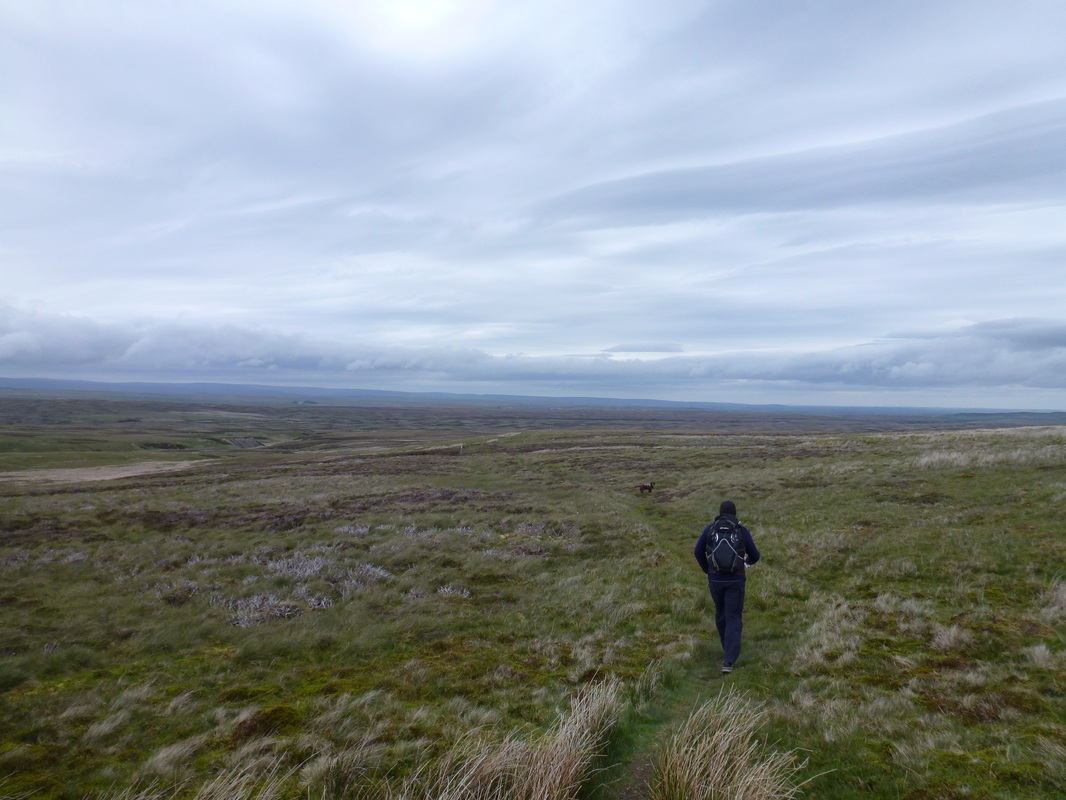 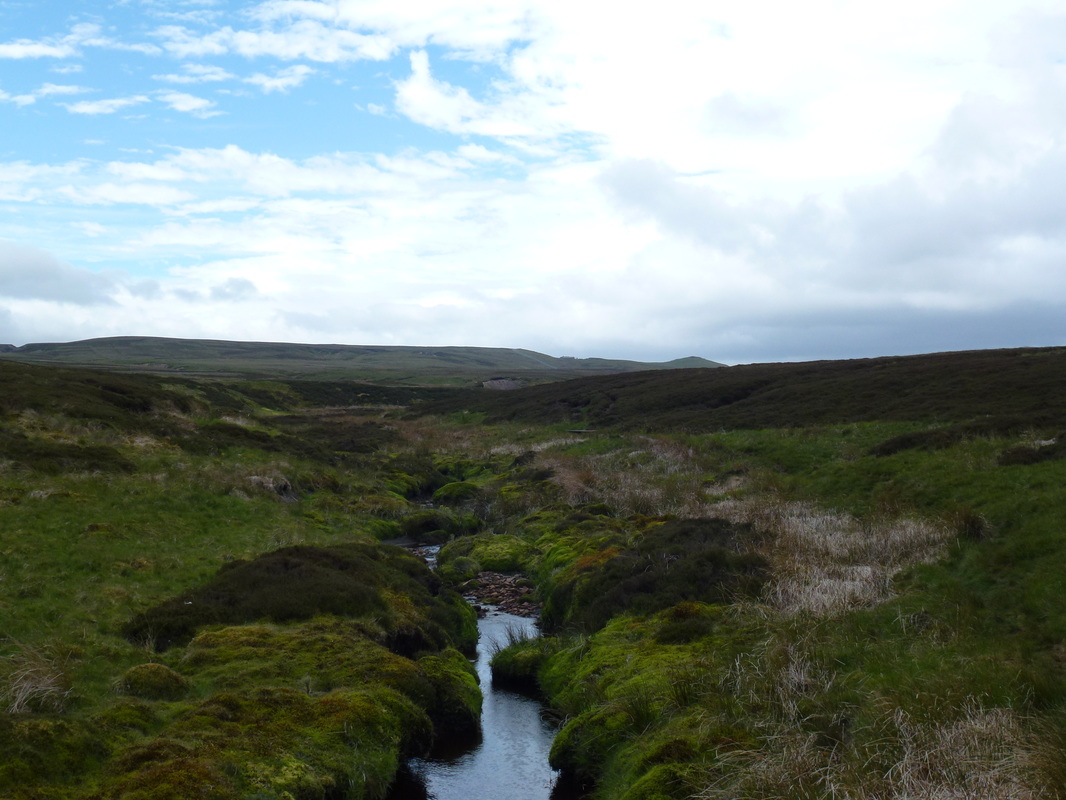 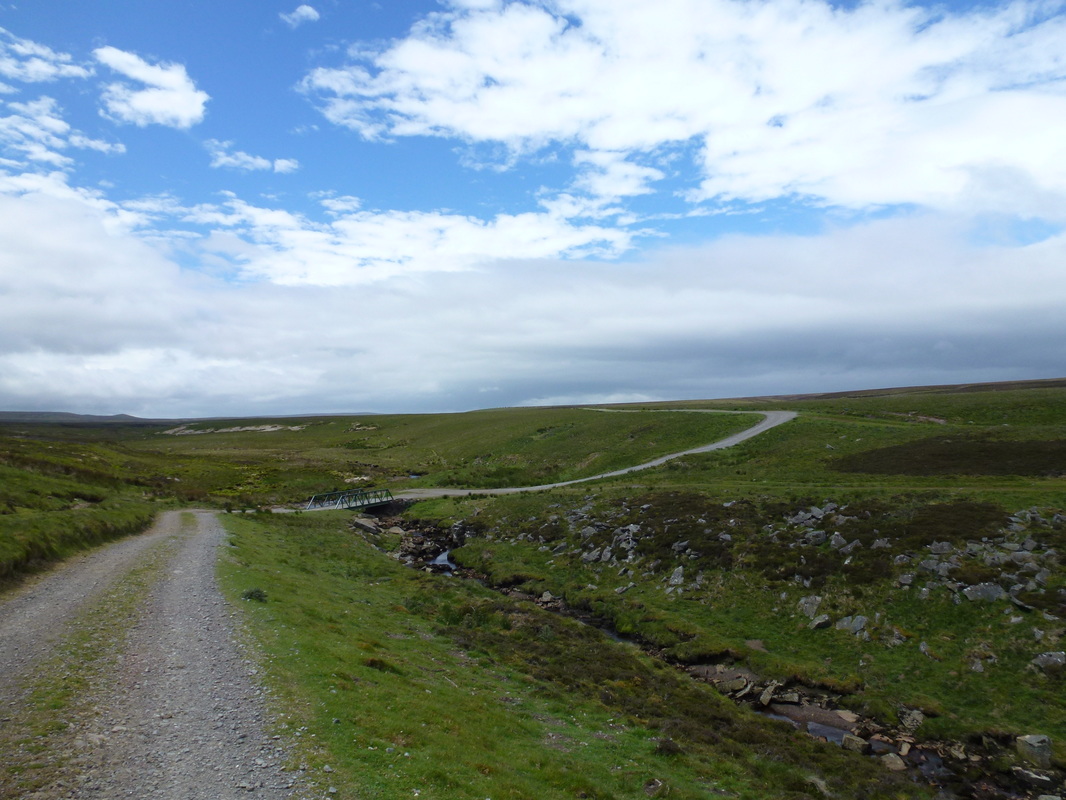 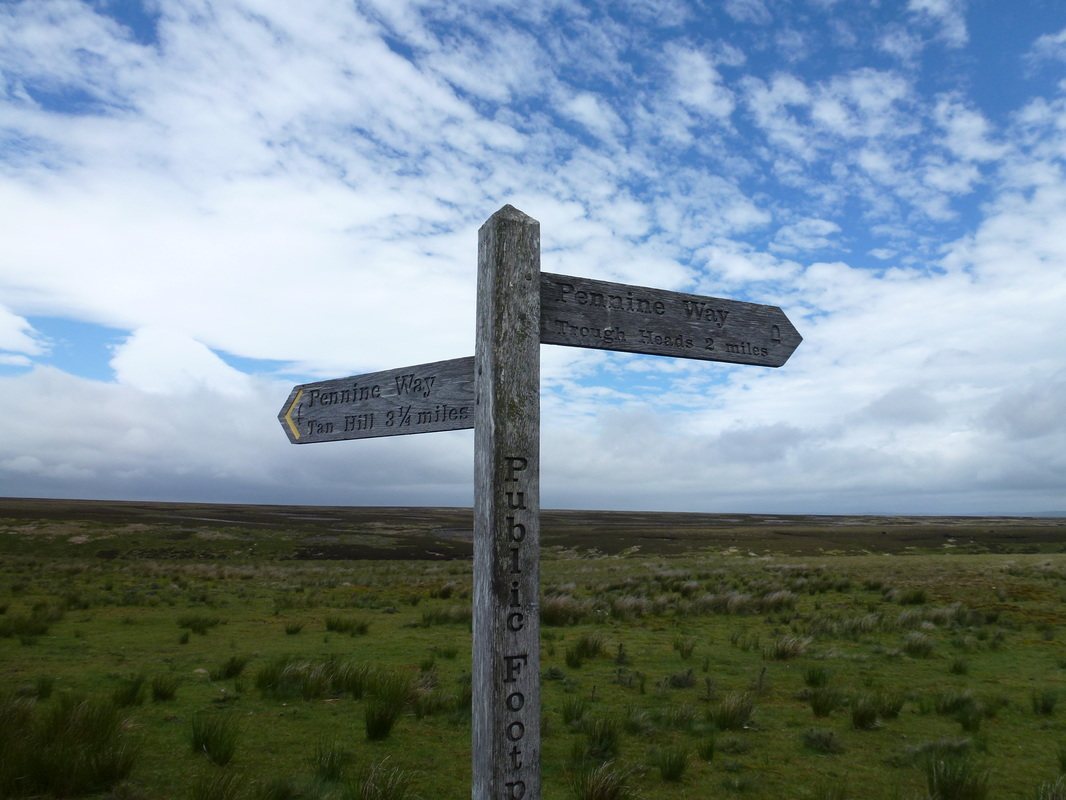 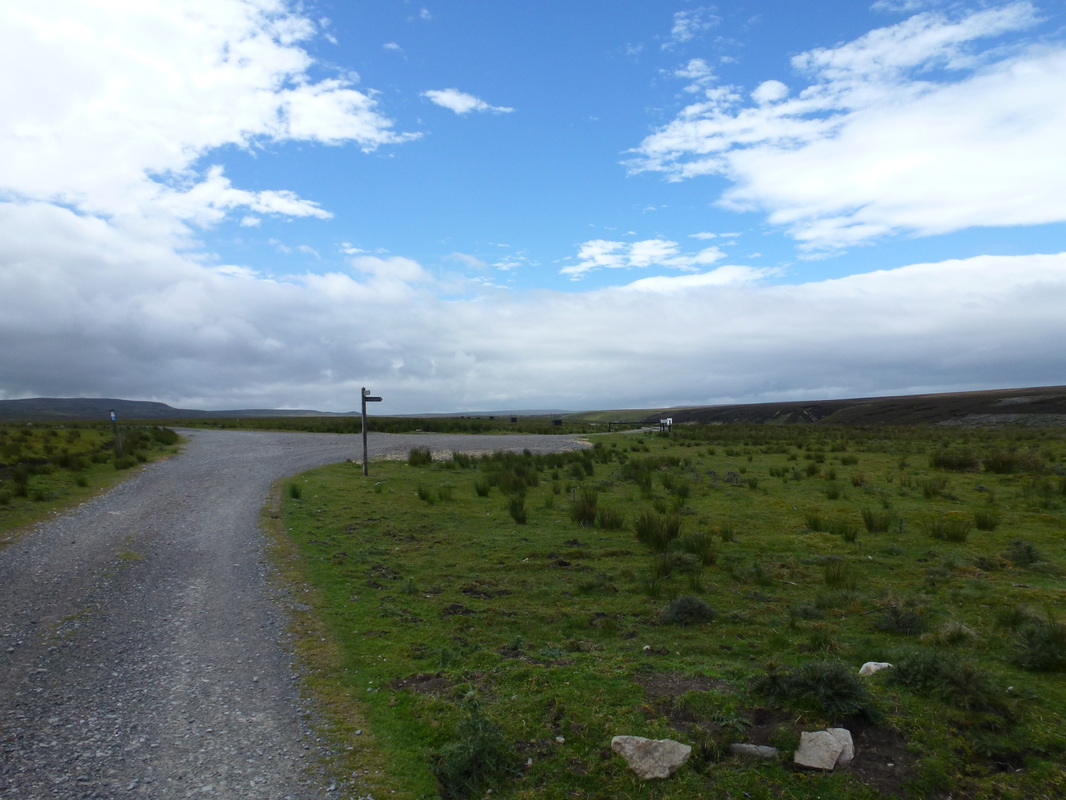 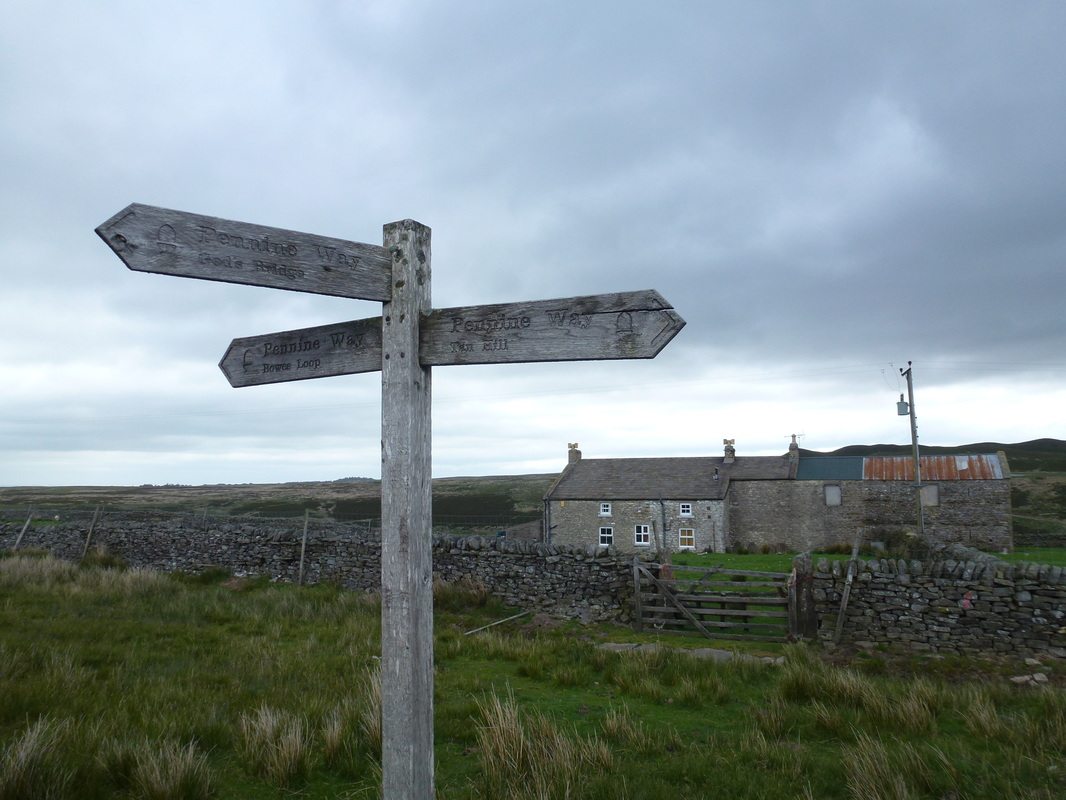 The start of the Bowes Loop at Trough Heads - we needed to get to Bowes therefore there is a variant on the route
From Trough Heads the path hugged the side of a wall and headed downhill to join a coarse gravel track. We could now hear the busy and noisy A66 and unfortunately this stayed with us until we reached Bowes. Passing the farms at West Charity and Lady Myres via a farm track it was now just a case of negotiating another farm at Swinholme before reaching the village of Bowes via a sunken lane. The pub in Bowes, the Ancient Unicorn was closed but there was work going on and we understand it reopened in September 2015, both for food & accommodation. All was quiet in the village and we hung around the castle for a while before calling a taxi to take us the 8 miles to our B&B in Barnard Castle. After an uninspiring evening meal we had an early night and prepared for the walk over to Middleton in Teesdale tomorrow. 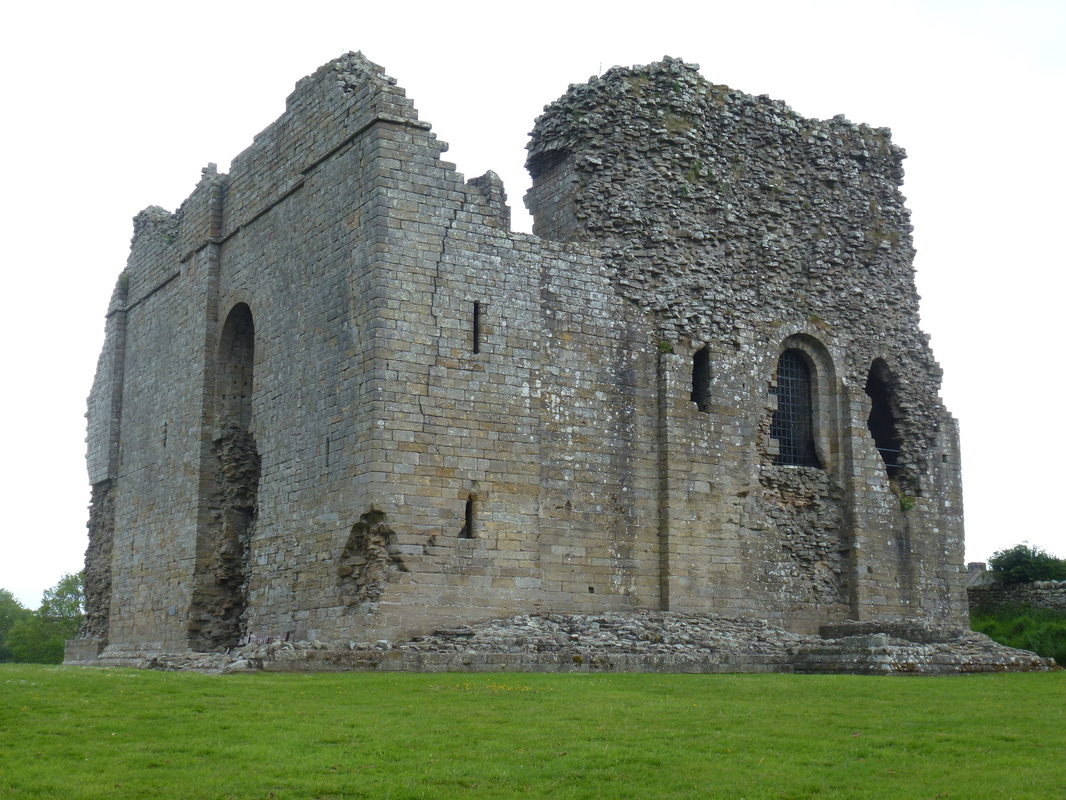 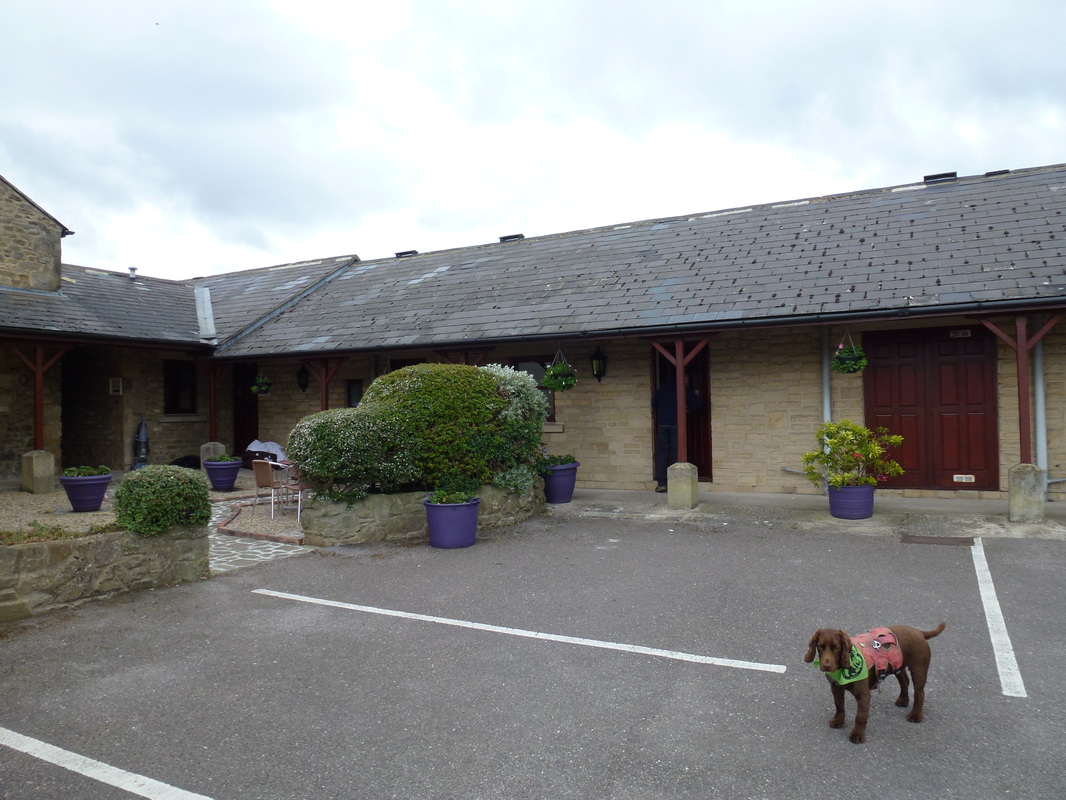 There was nothing in Bowes therefore we had to stay about 8 miles away at Jersey Farm near Barnard Castle - we booked taxis in advance to get us to/from Bowes. The B&B was ok and served a purpose. We also had our evening meal at Jersey Farm - in company with a gang of overbearing, swearing builders - thanks for the ambience fellas.​
Day 10 Data
​© Copyright Dave Walsh 2013 - 2022 All Rights Reserved