Plenty of parking in Patterdale Village (Postcode is CA11 0NW)

Good mountain and shoreline paths. The path on the descent from Low Raise to Measand Beck is not well used but is easy enough to follow although is not as prominent on the ground as the remainder of the walk.

Dave
​If the above GPX file fails to download or presents itself as an XML file once downloaded then please feel free to contact me and I will send you the GPX file via e-mail.  ​ 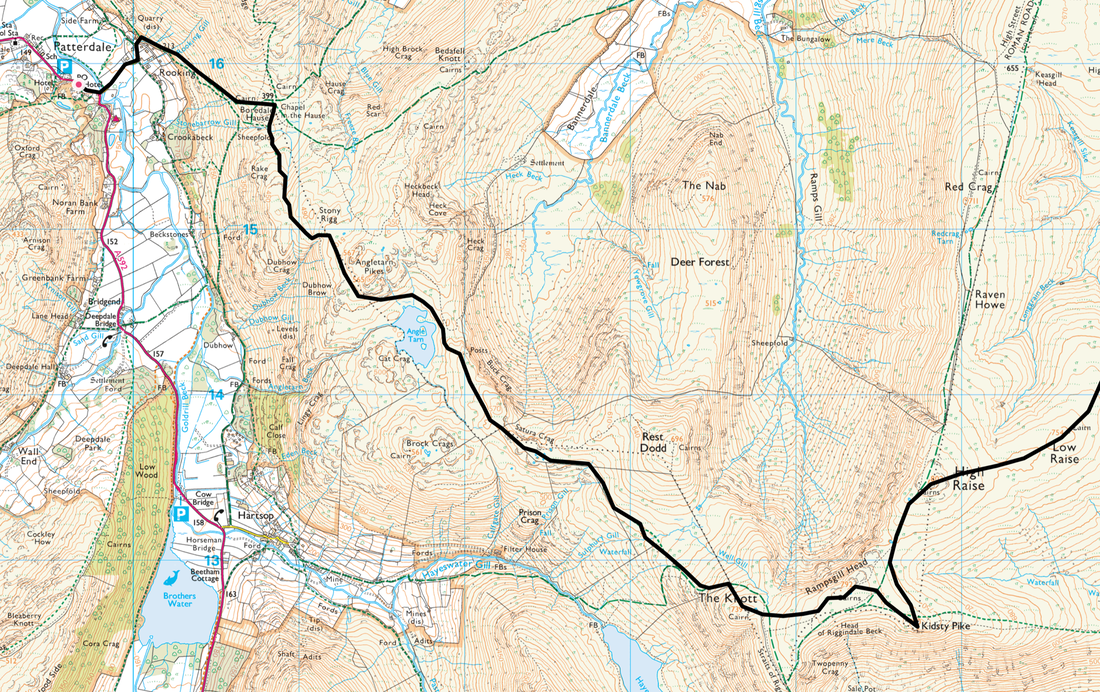 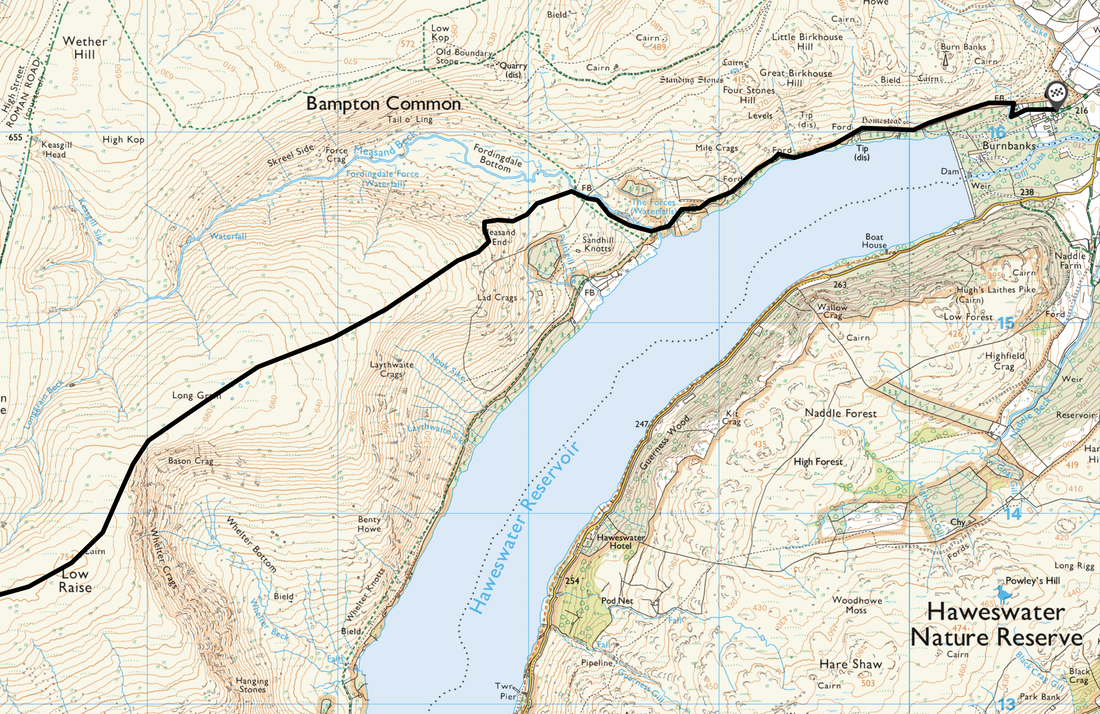 Low Raise to Burnbanks
In the Summer I guide on the Coast to Coast walk.  Therefore I did this walk to recce an alternative route down from Kidsty Pike to Haweswater. The original Coast to Coast route descent to Haweswater via Kidsty Howes is quite steep - this route offers an alternative and gentler descent to the lakeshore and knocks a mile off an already long leg to either Bampton or Shap. For purists who wish to stick to the original route then that is fine - however if you wish to reduce your mileage and descent then this route may be of use to you. 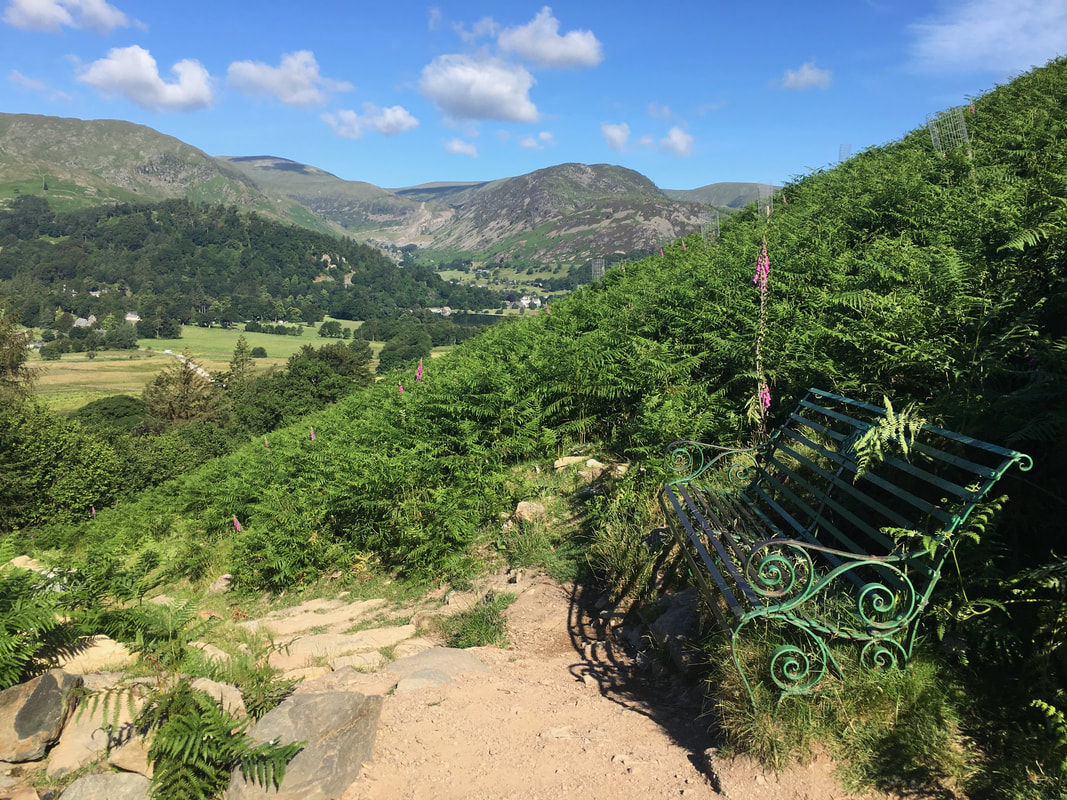 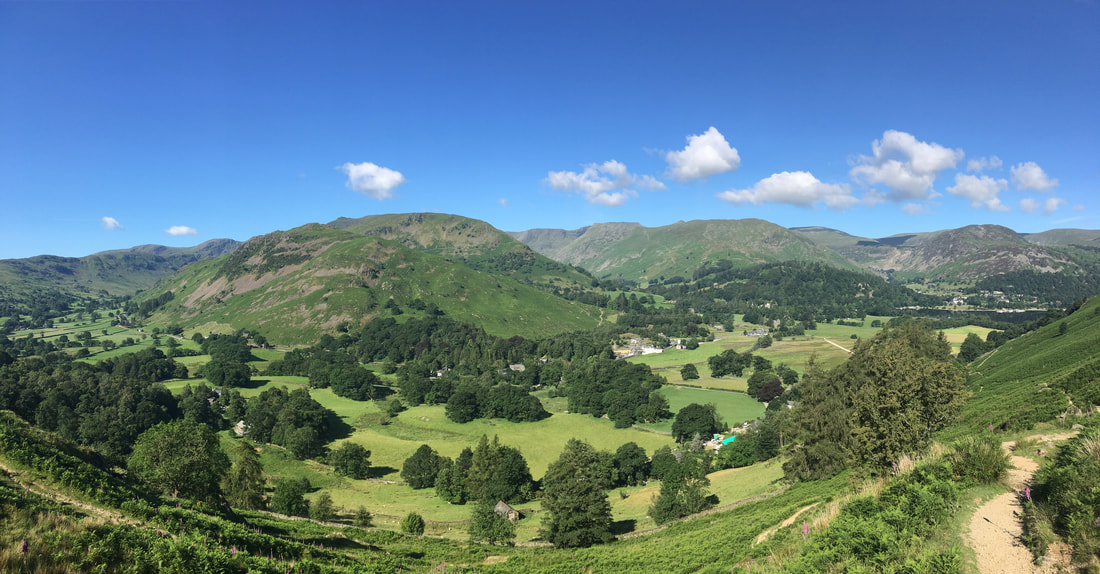 A wider panoramic view from the path to Boredale Hause 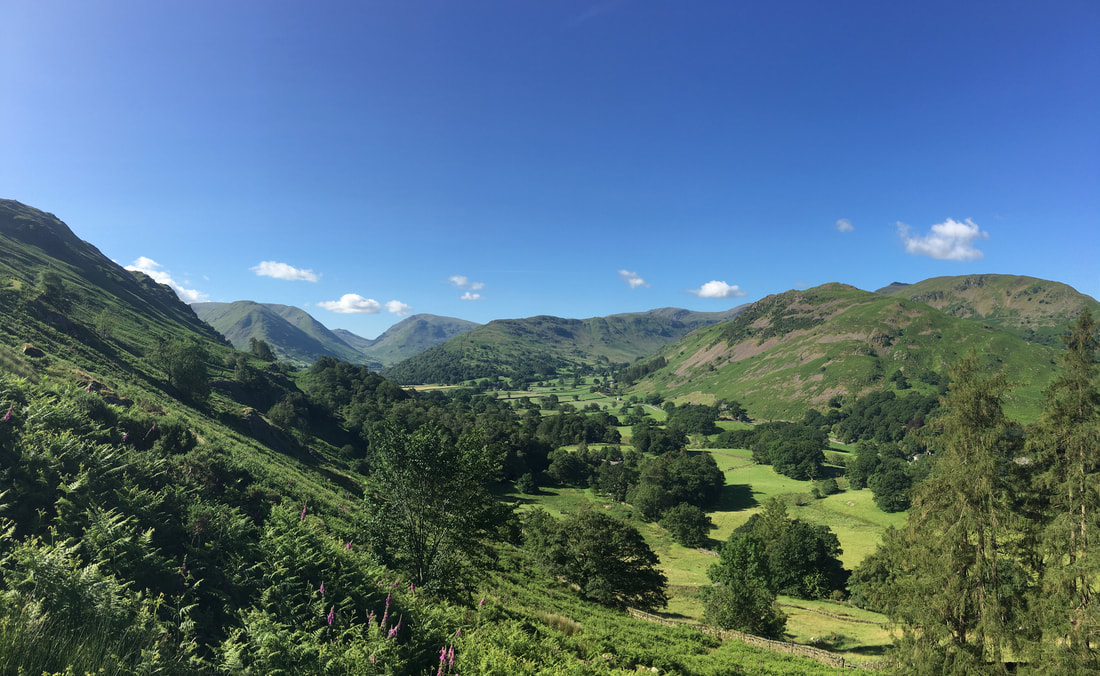 The ascent of Boredale Hause is one I have done many, many times but this jaw dropping view never ceases to make me catch my breath - particularly on such a lovely day as this was. Left to right are Hartsop Dodd, Caudale Moor, Red Screes, Middle Dodd, Hartsop Above How, Dove Crag, Hart Crag & St Sunday Crag 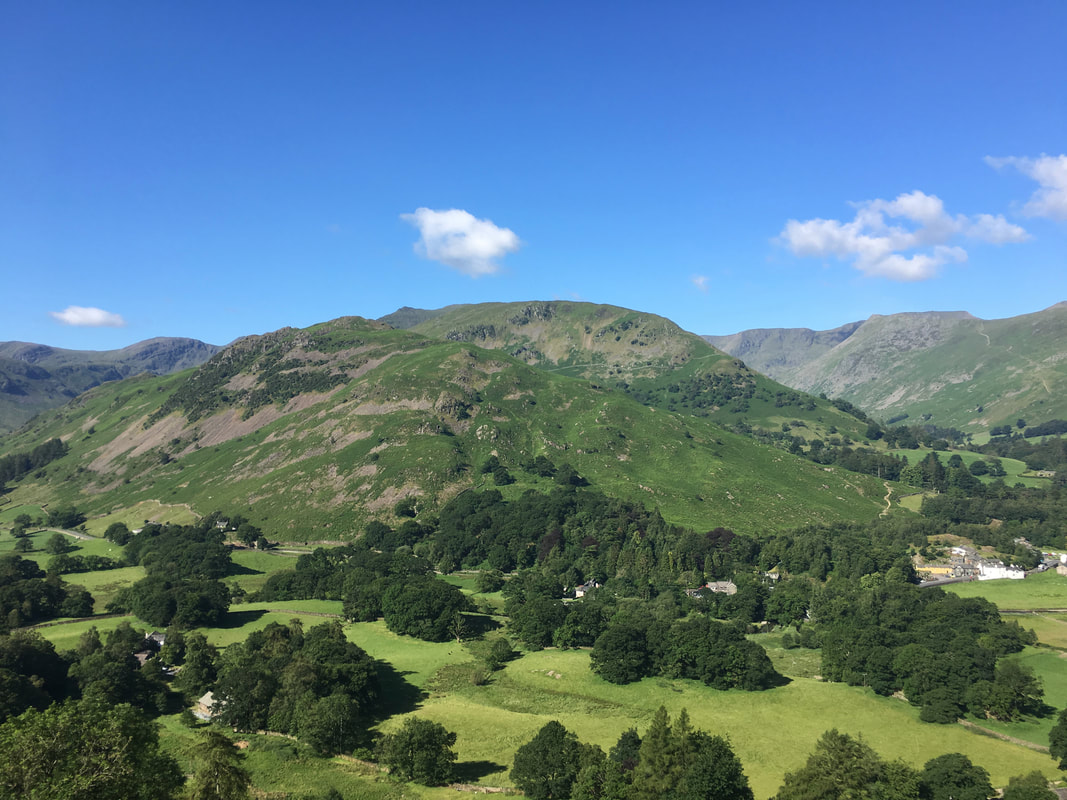 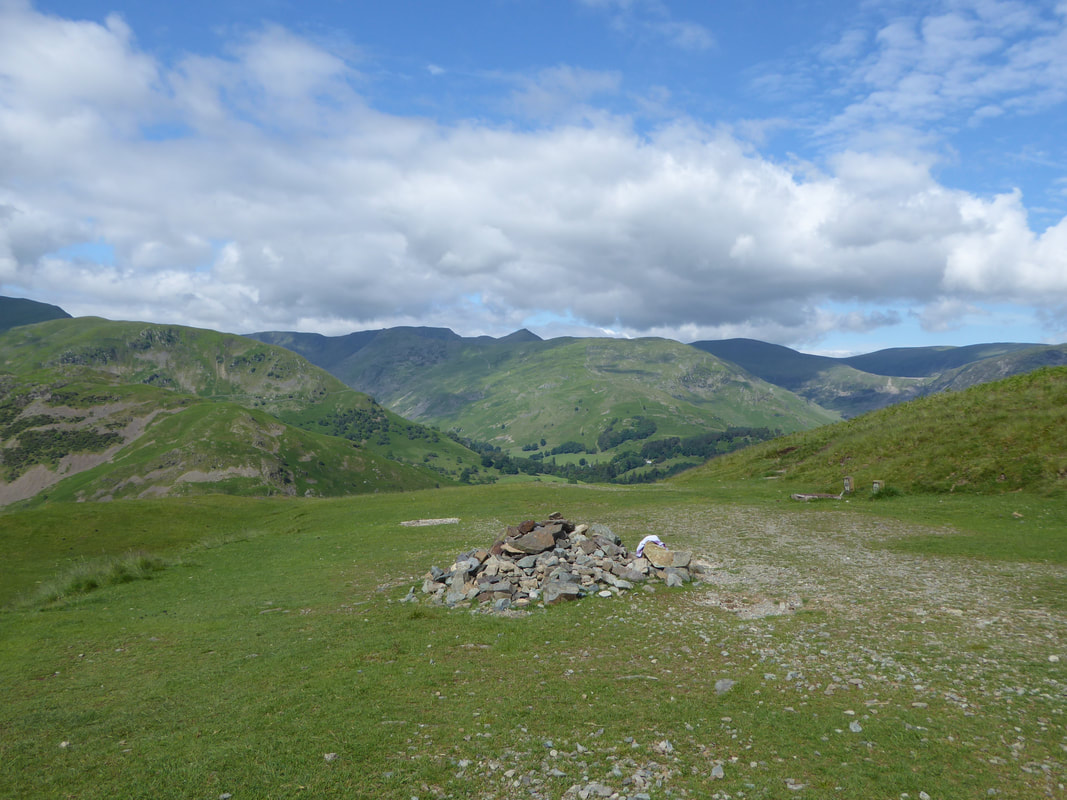 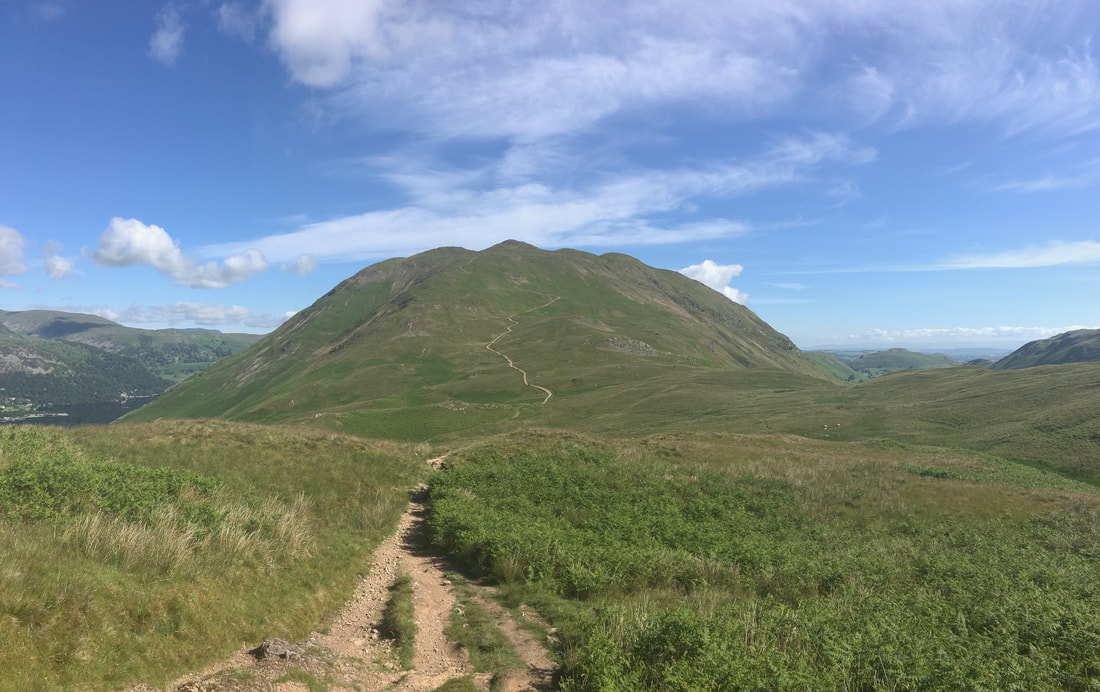 Place Fell from the path to Angle Tarn 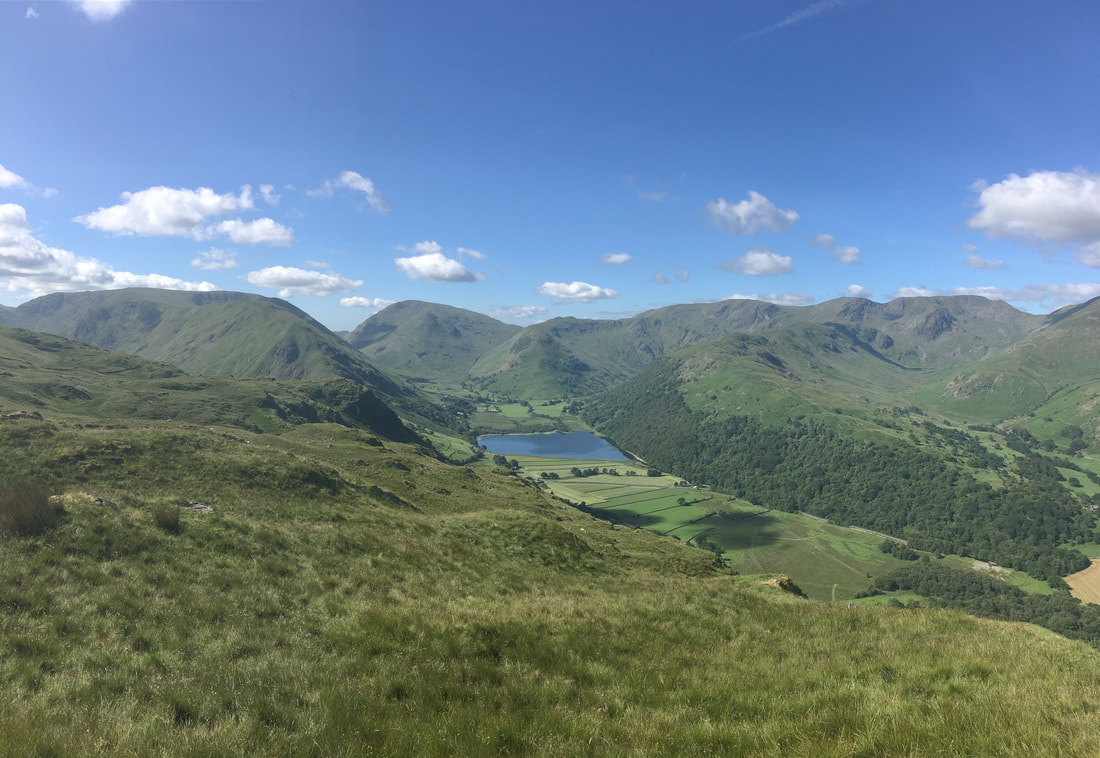 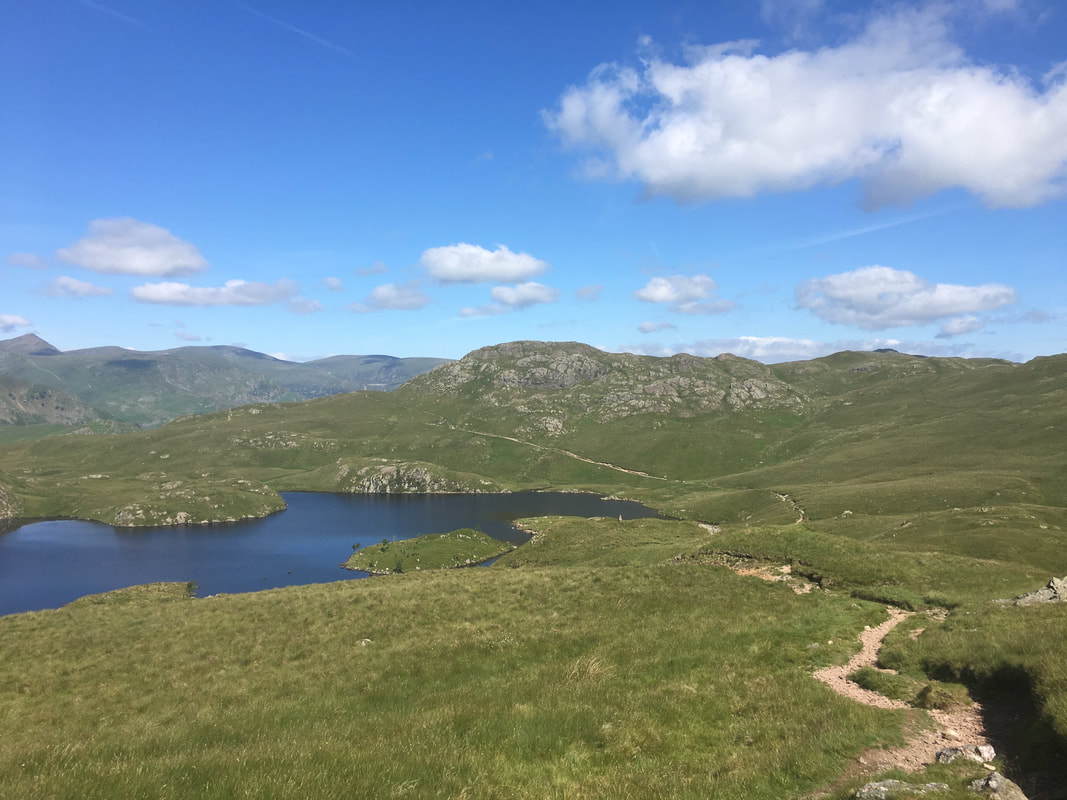 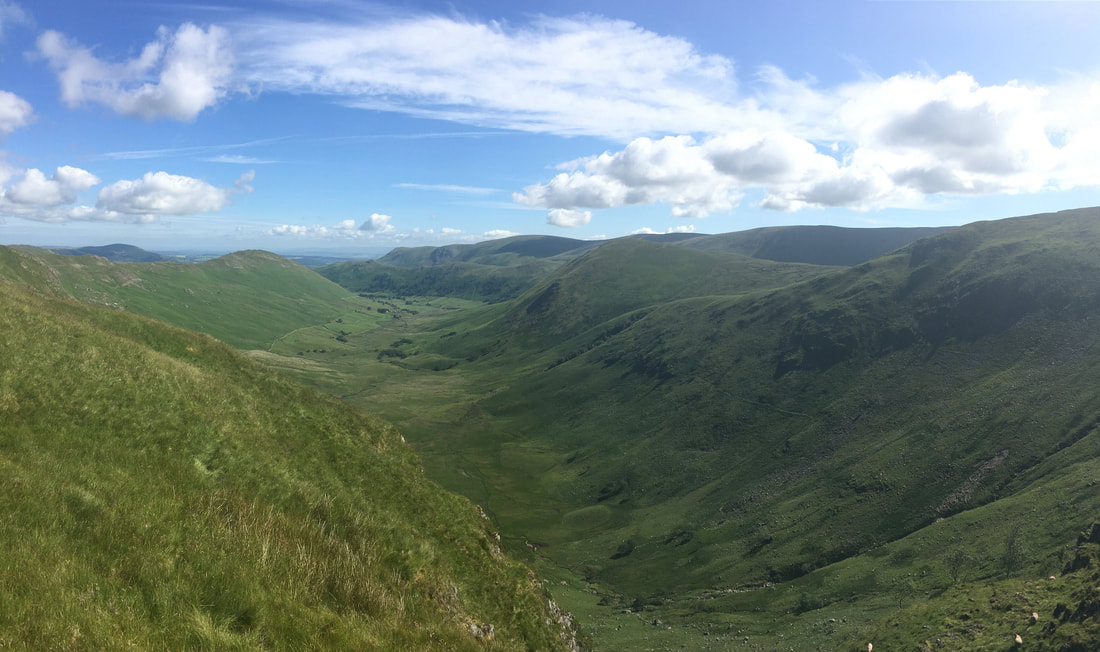 Bannerdale from near Satura Crag 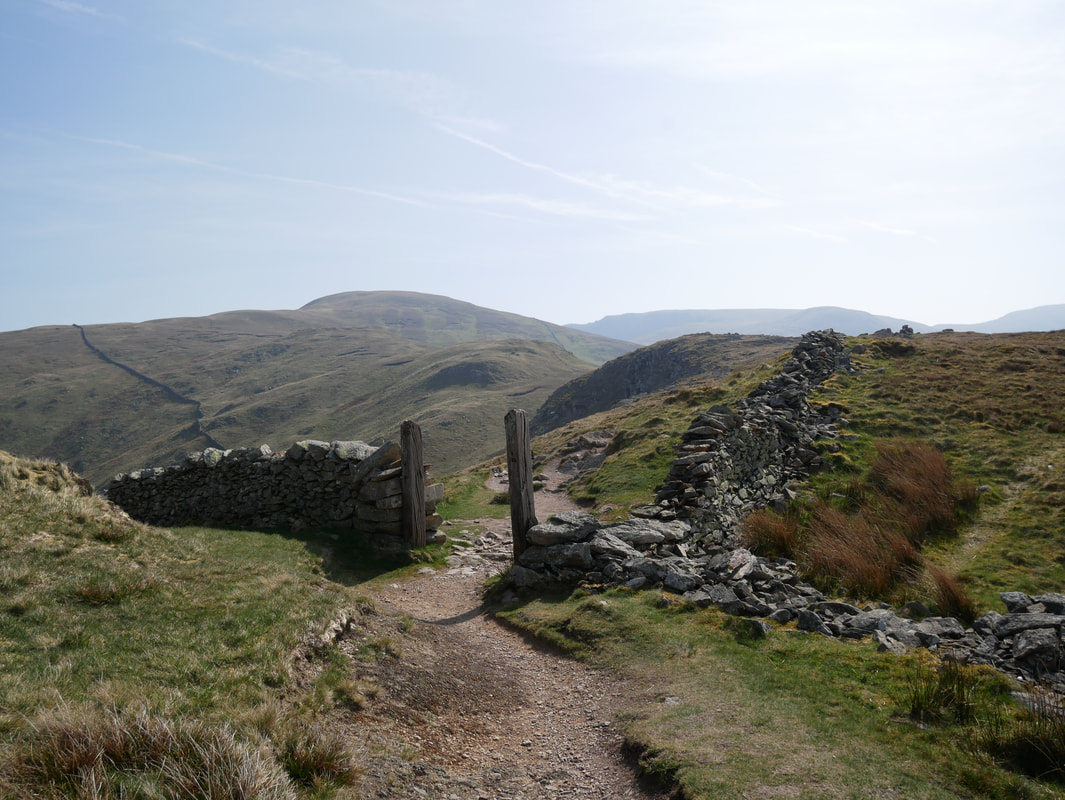 Passing through the wooden gateway

It is here that I have seen quite a few people make navigational errors thereby adding mileage onto an already long day on the Coast to Coast. Walkers need to pass through the gateway and keep to the left hand side of the broken wall on the right. A little further on from the gateway are several paths heading left and the temptation for walkers is to take one of these paths which heads off route towards Rest Dodd (the fell in the centre of shot). It is simple - handrail the wall (which later becomes a fence) as closely as possible and you will remain on the Coast to Coast path. 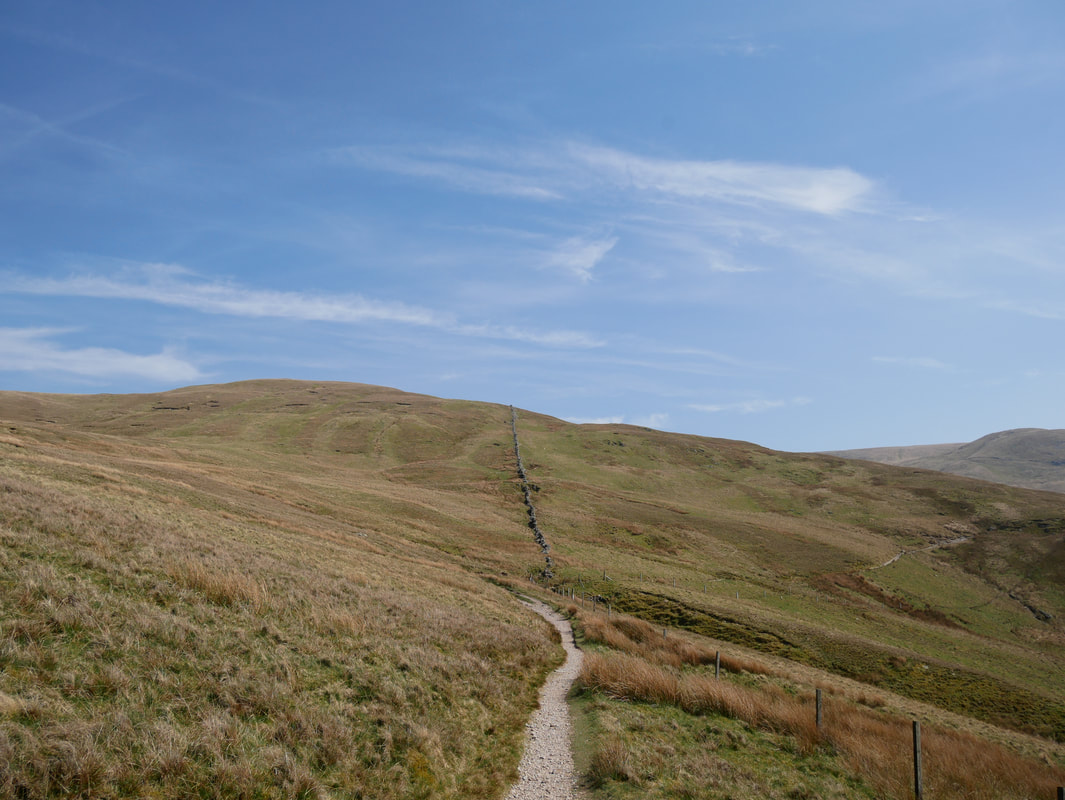 Handrailing the fence on the Coast to Coast Path. Rest Dodd is ahead and the C2C route can be seen heading to the right. 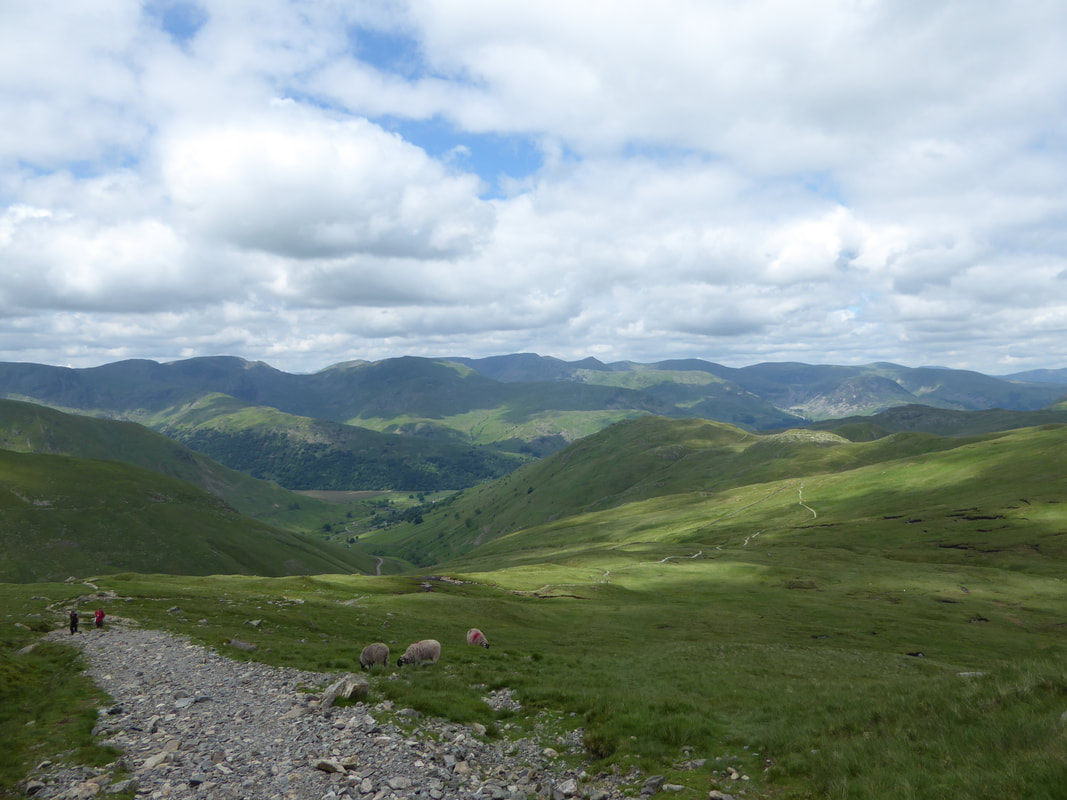 Ascending towards The Knott looking back to Satura Crag - fells everywhere 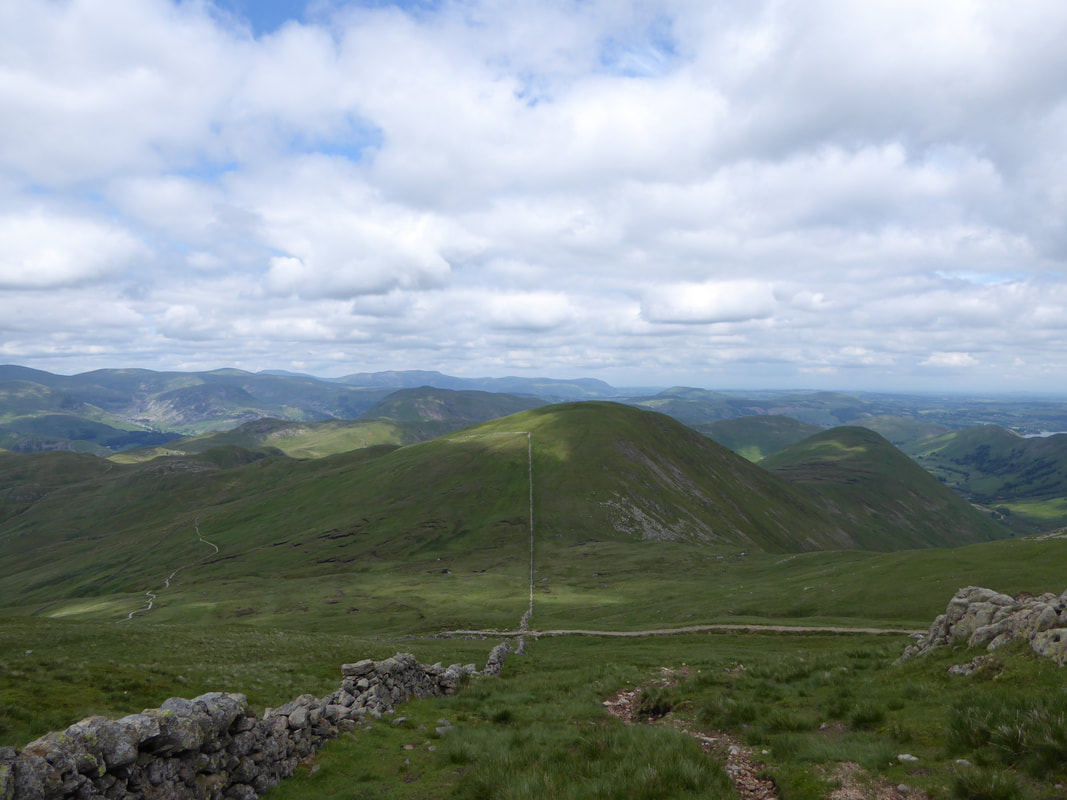 Breaking off route to climb The Knott which for very little effort is well worth it. The Coast to Coast path can be seen below and heads around the base of The Knott. In the background is Rest Dodd - a long, steep & pathless descent to regain the route should a mistake in navigation be made at the wooden gateway. 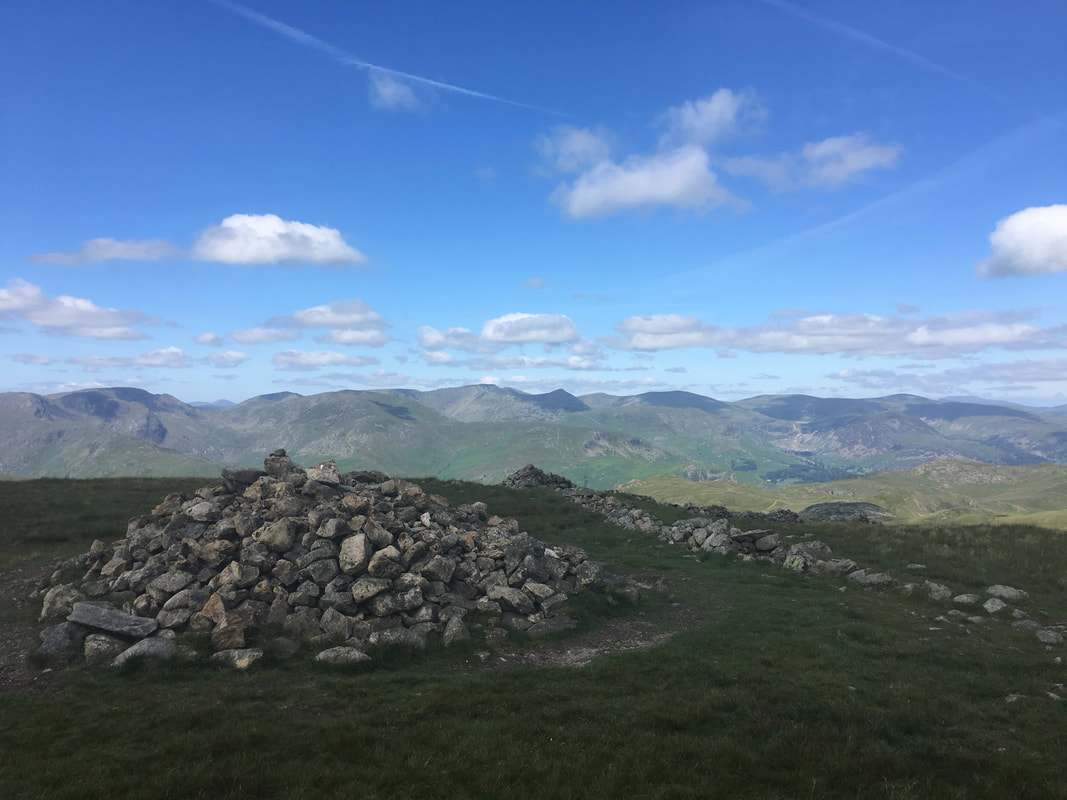 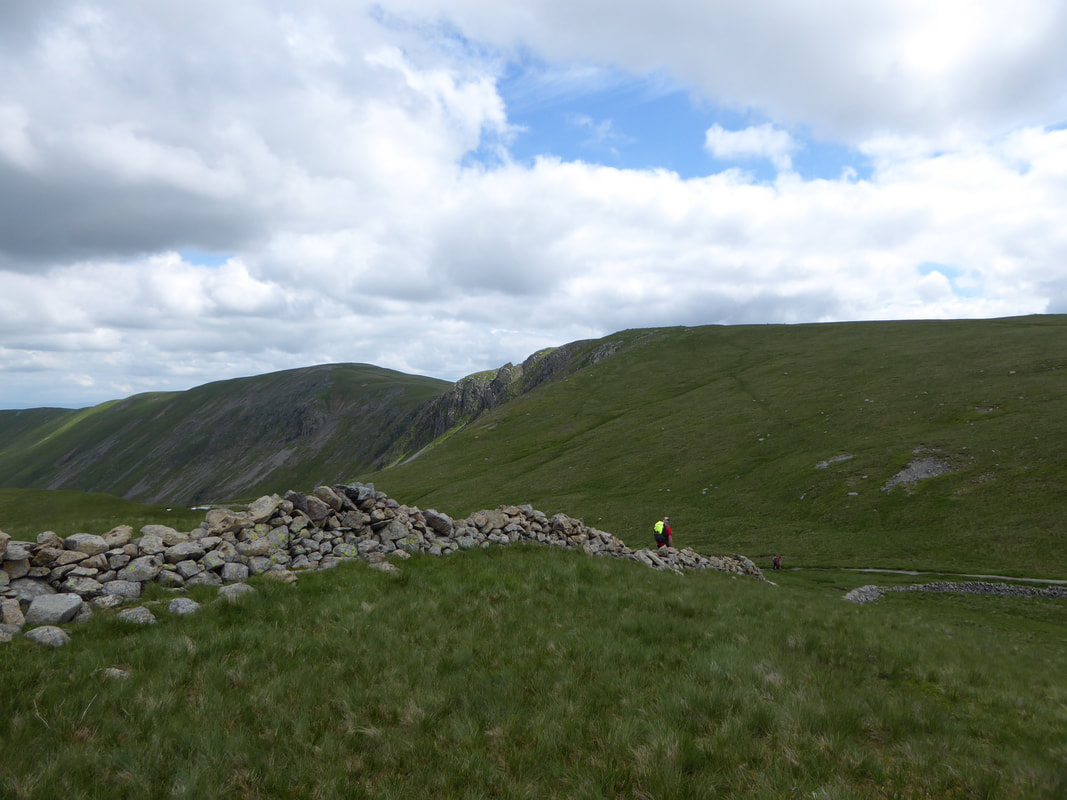 Heading down from The Knott - the Coast to Coast path is below and continues to the right. ​If the weather is set fair or you are able to navigate in low cloud then Kidsty Pike can be gained via Rampsgill Head. The path I took can be seen at the base of the wall and slopes up the fell side from right to left 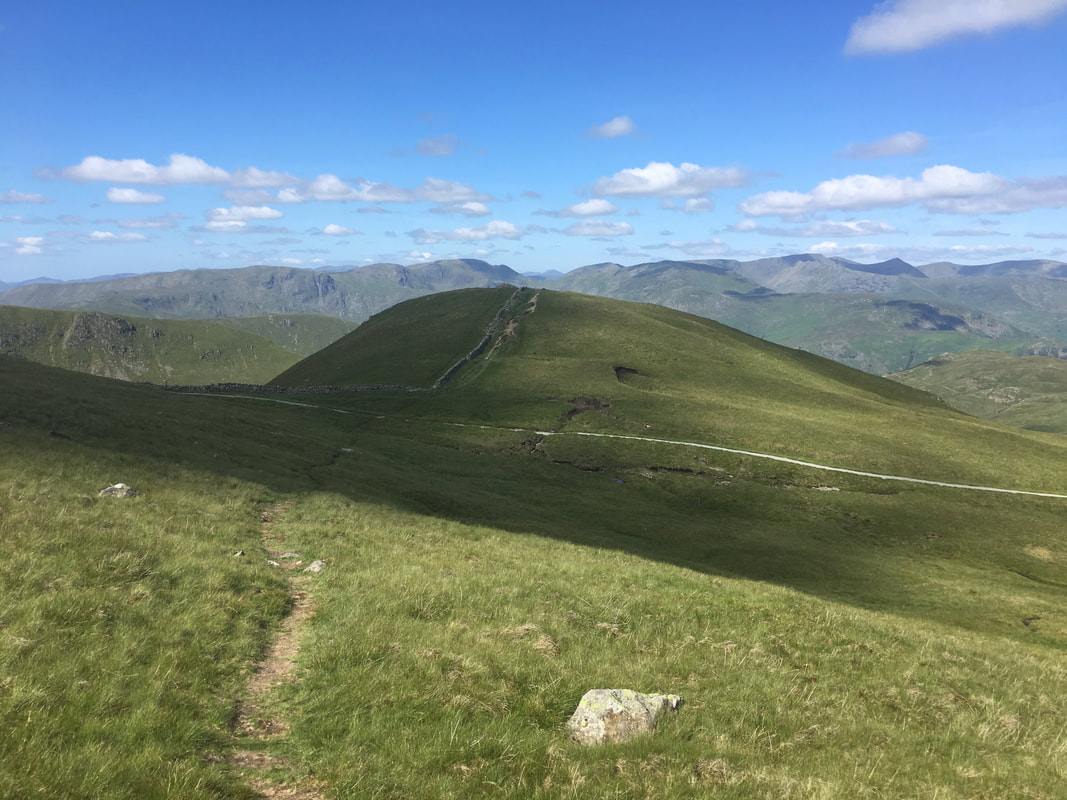 Looking back to The Knott from the path to Rampsgill Head 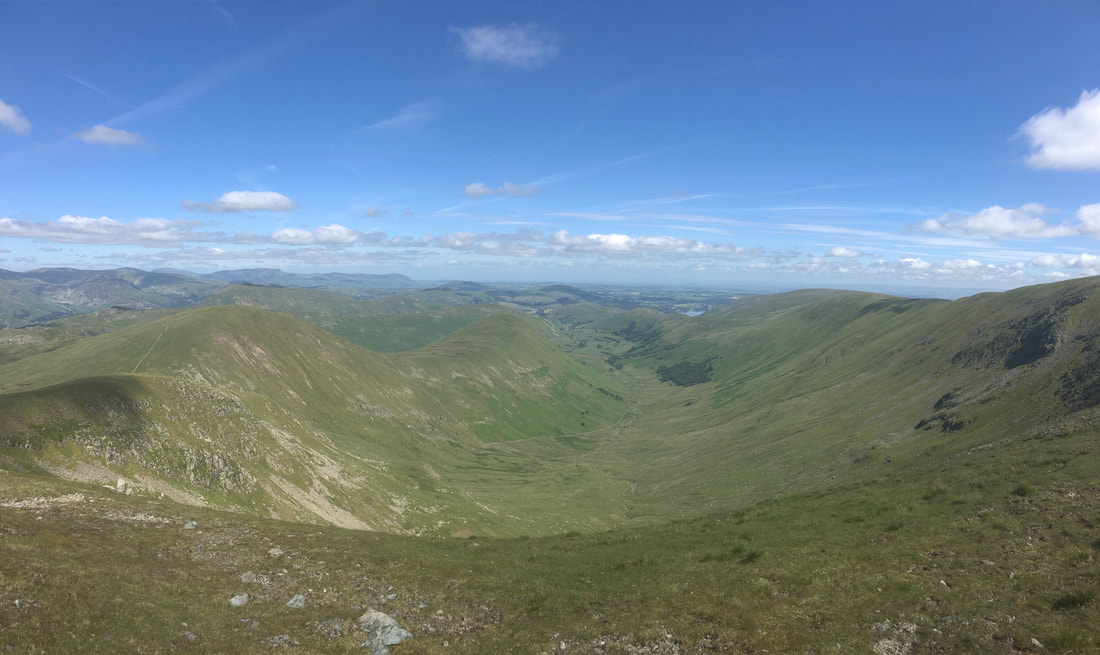 The valley of Ramps Gill 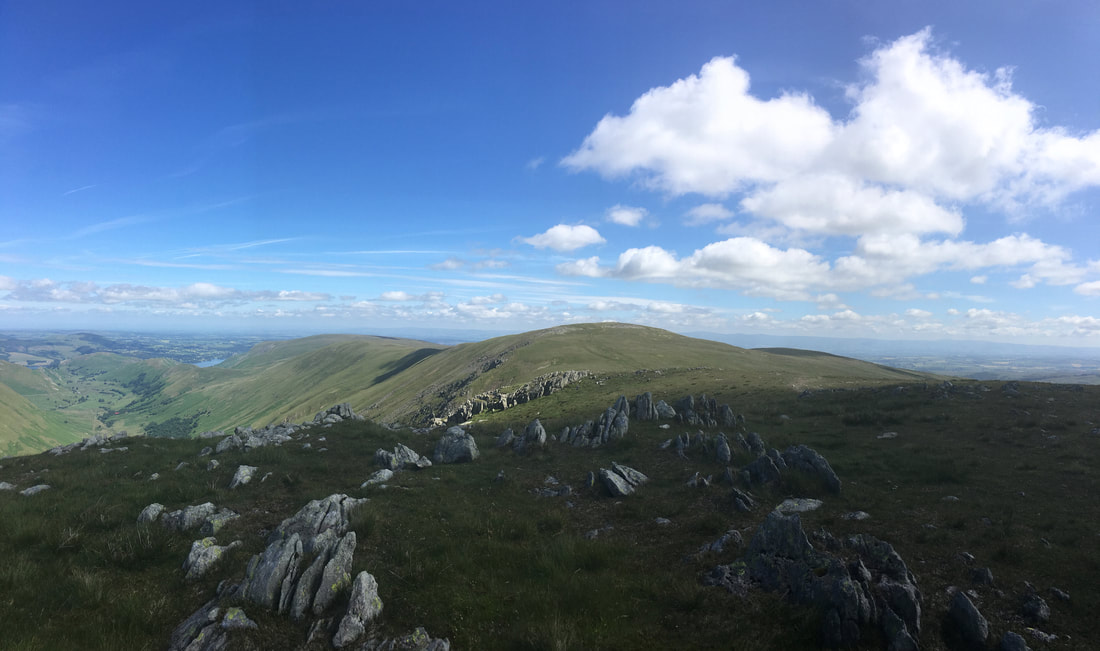 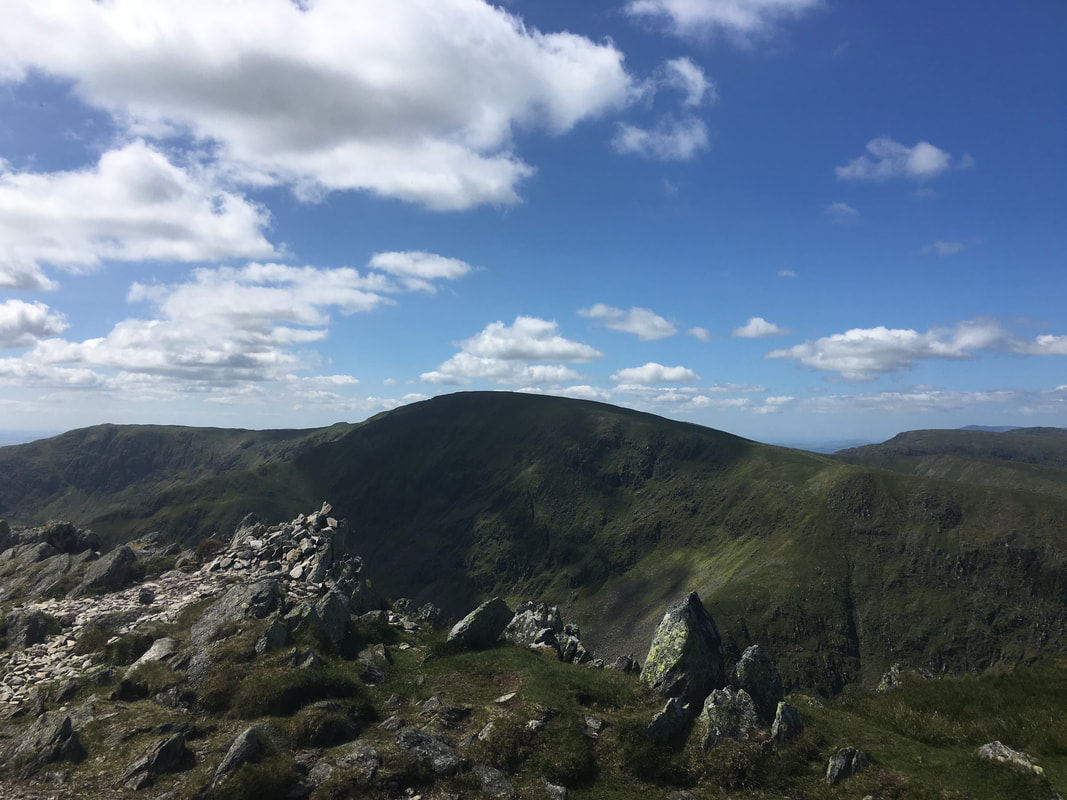 The summit of Kidsty Pike looking to High Street 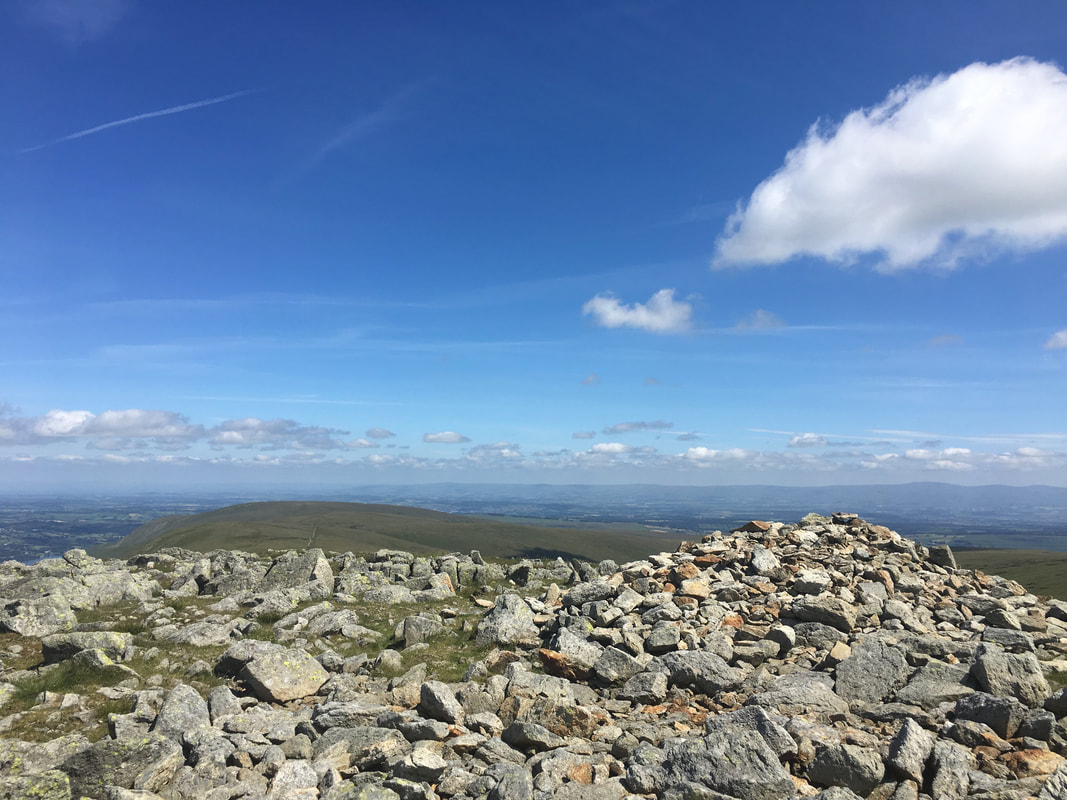 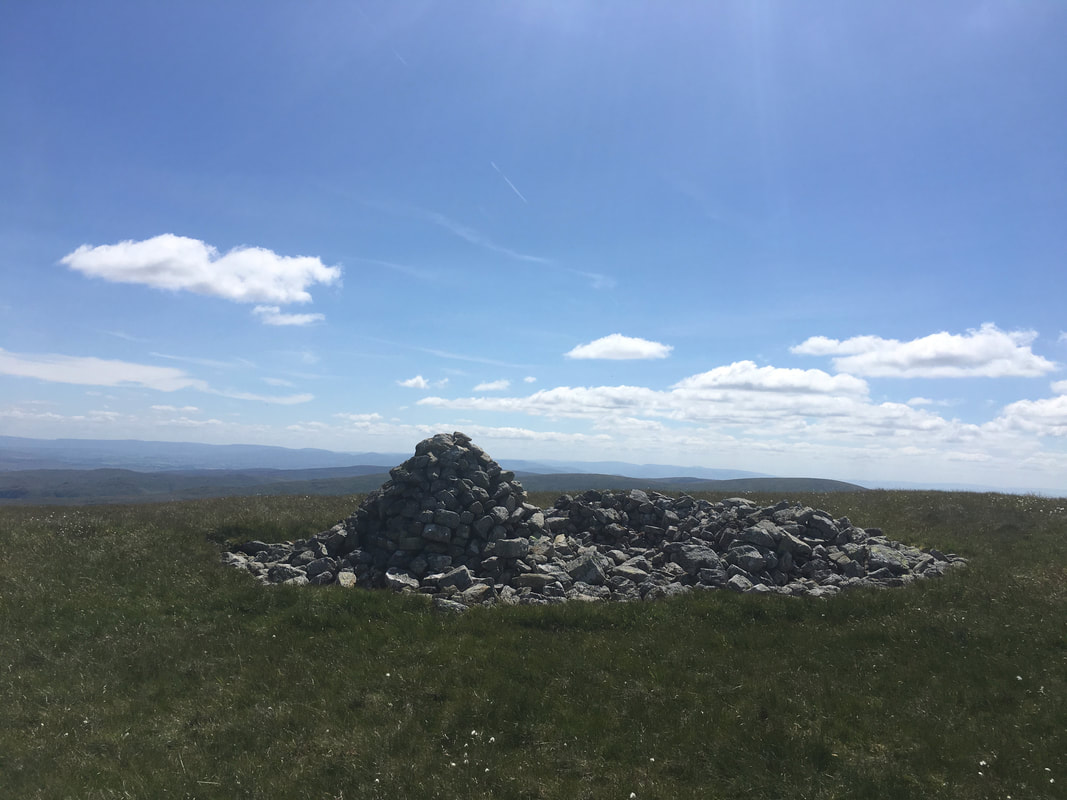 The cairn & wind shelter on the summit of Low Raise 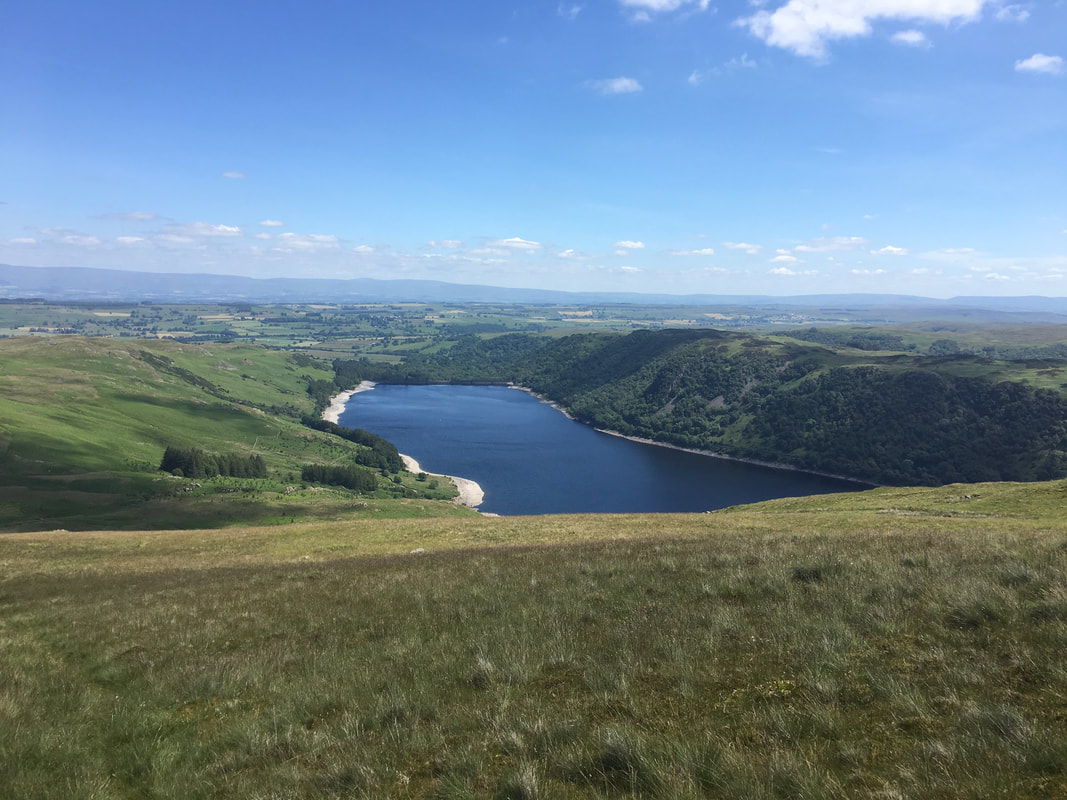 The northern end of Haweswater from Long Grain 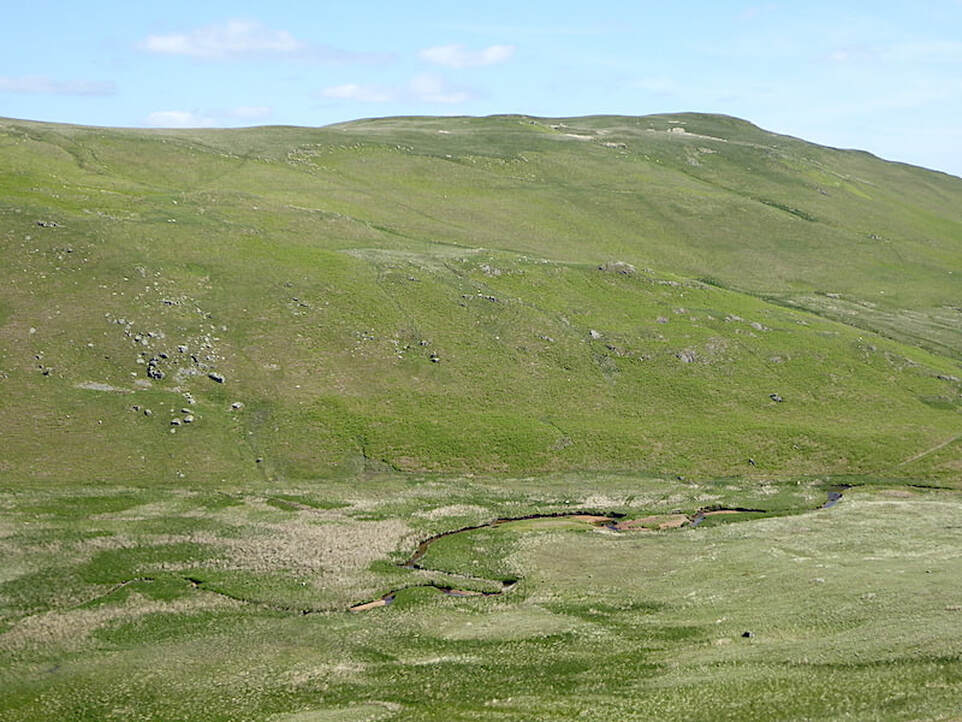 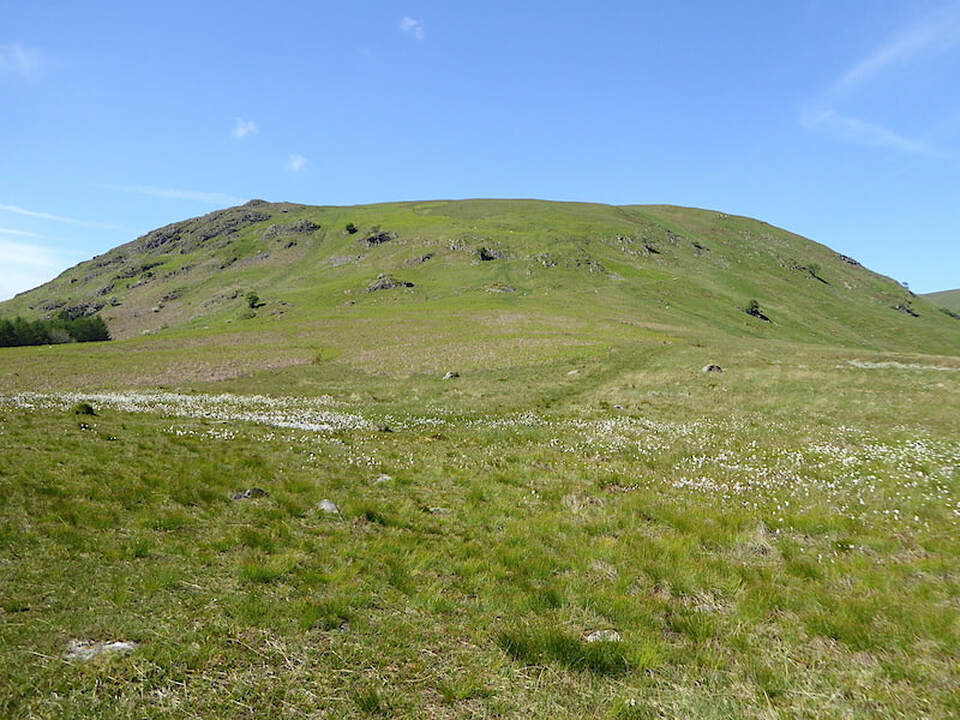 Looking back up to my descent from Measand End 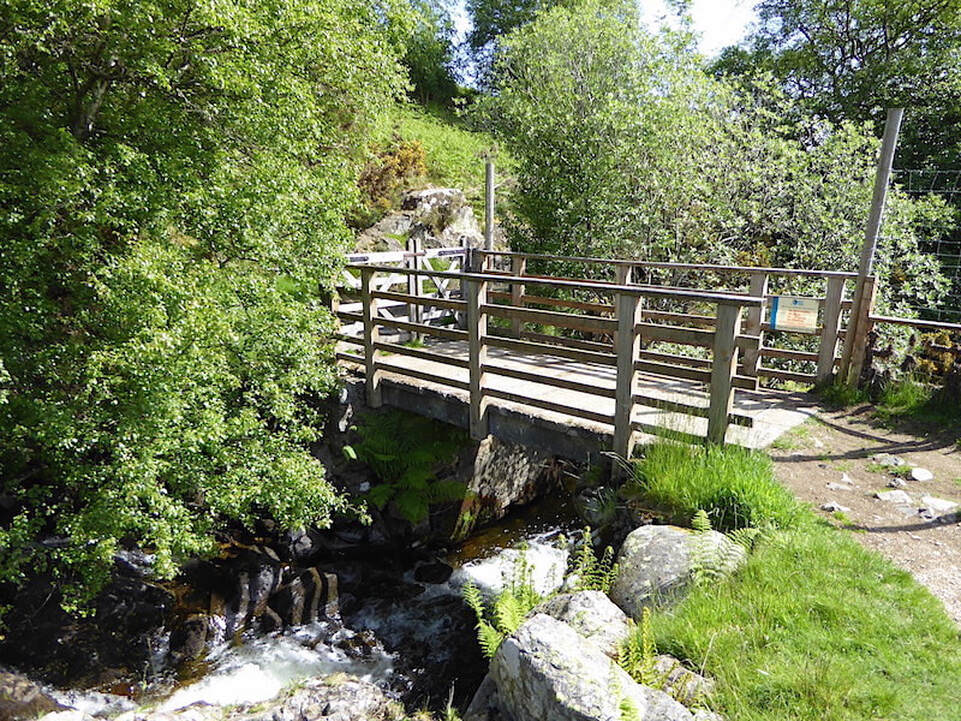 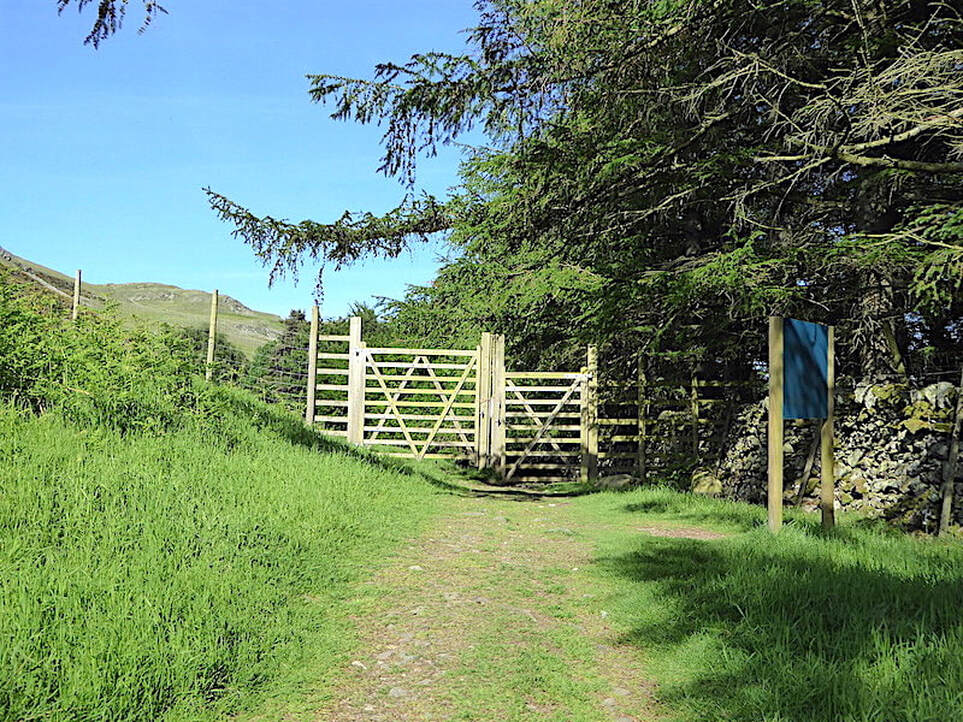 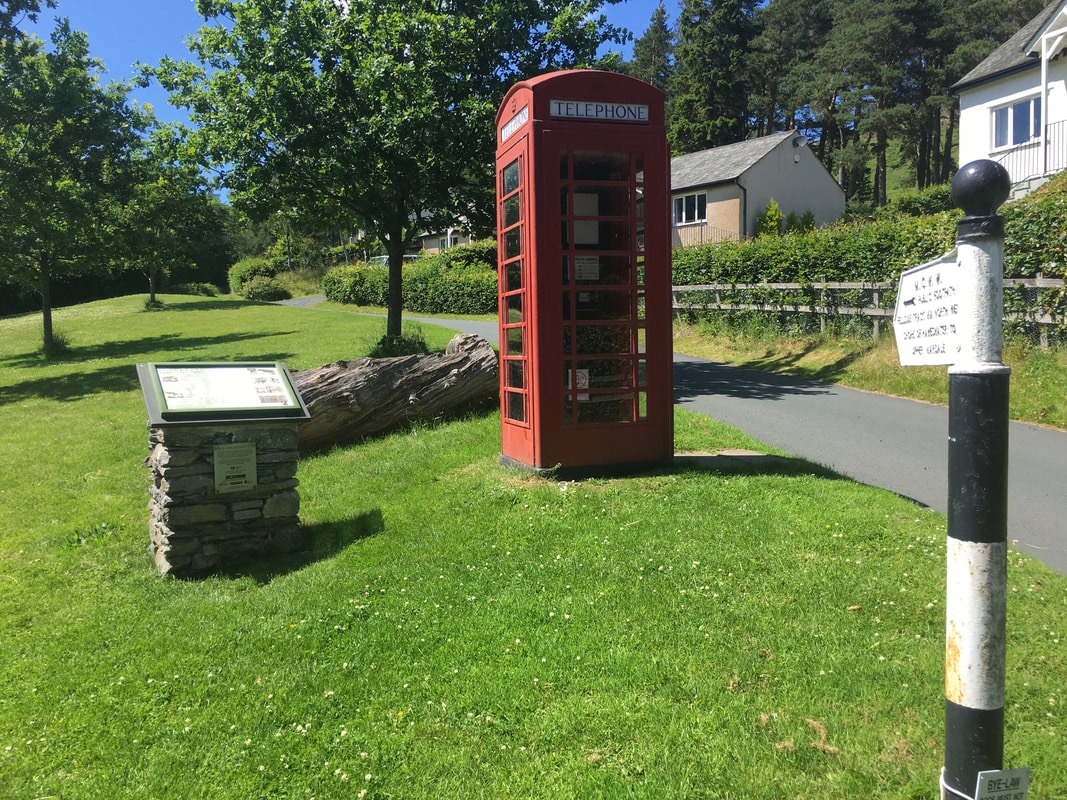 Journeys end for today in the lovely village of Burnbanks

Burnbanks is a small settlement one and a half miles south-west of the main village of Bampton. It comprises eighteen houses. Some of these have been built on the original footprints of houses occupied in the 1930's by the men and their families who were employed in building the dam at the end of Haweswater.  Close by, at Naddlegate are half a dozen bungalows which were built for more senior staff, engineers and managers who came to work on the dam project. 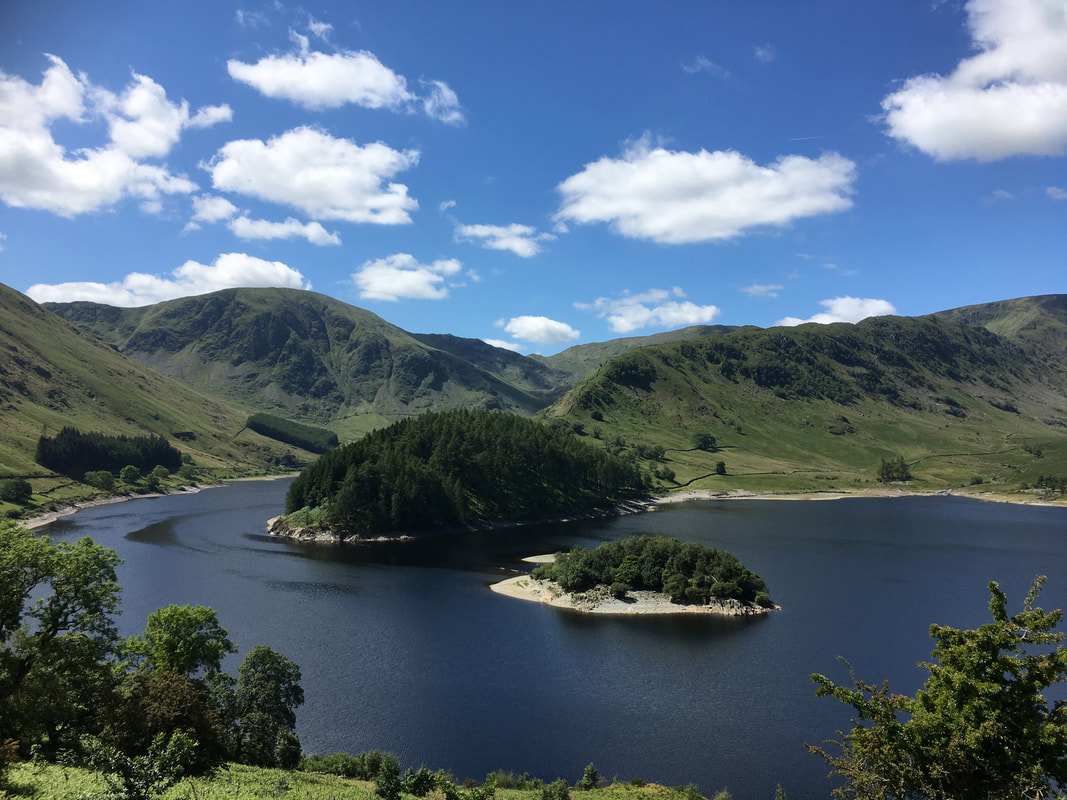 I was met at Burnbanks by Angie & Fudge who, whilst I was hot footing it over from Patterdale took the opportunity to drive along the eastern side of Haweswater and capture these lovely images of this man made but still beautiful spot. The wooded spit of land jutting out is known as The Rigg and the island is called Wood Howe. Harter Fell is to the left with the superb ridge encompassing Rough Crag & Long Stile to the right

A wider panoramic of the southern end of Haweswater
Home