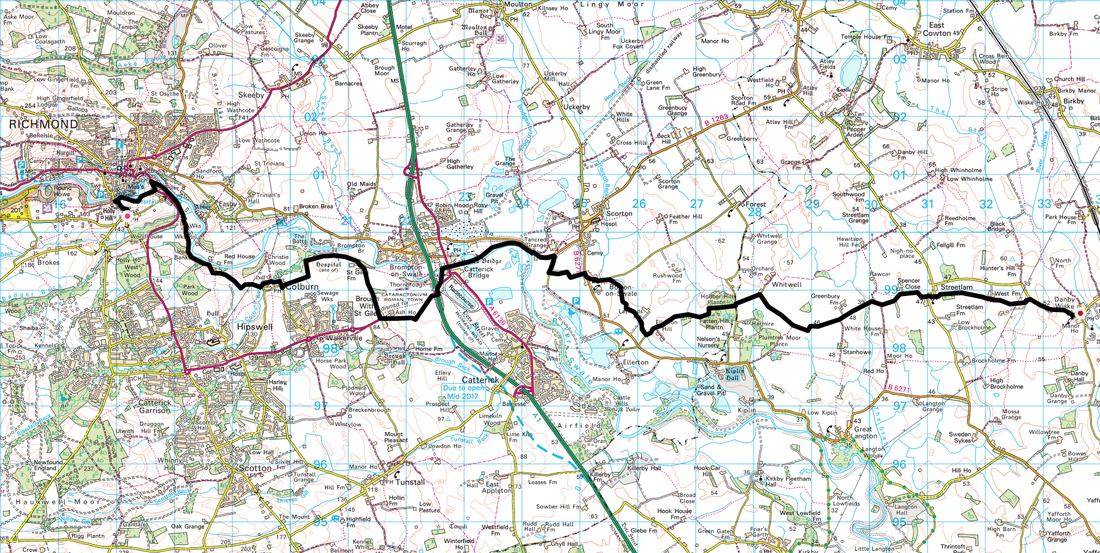 A long day today of 14 miles over to Danby Wiske. Not much ascent & descent to cope with however there was a fair bit of road walking to contend with, albeit on quiet lanes for the most part. The weather forecast was for an overcast yet mild day (again) although the sun did promise to try and break through now and then.

Breakfast at The Holly Hill Inn was a strange affair - nothing wrong with the food at all, however any thought of conversation was drowned out to the sounds of the 60s blasting out from the speakers above our heads. The very pleasant lady who served us took our order and we asked what the choice of eggs was - "Free Range" she replied!! Breakfast over, we packed up our stuff and readied ourselves for the off in the pub garden. The landlady came rushing out and asked us if we had paid - we informed her we had, last night!​ 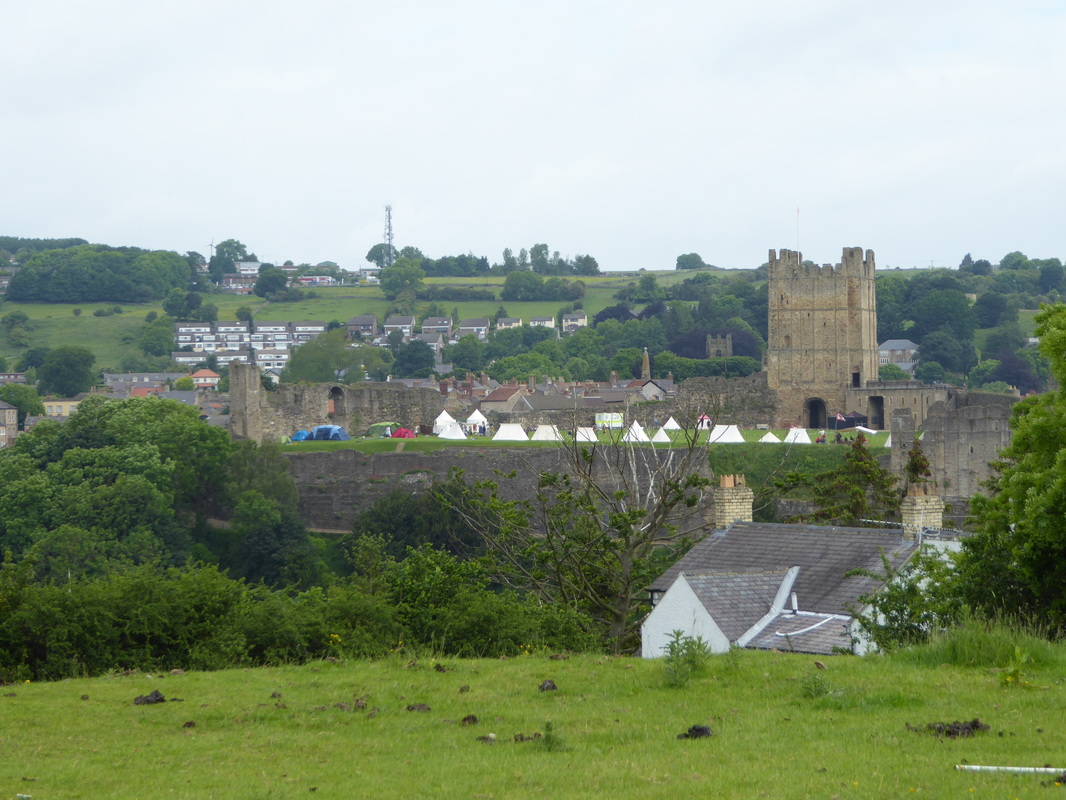 Lots going on in the grounds of Richmond Castle
We headed down the hill to rejoin the Coast to Coast route near Richmond Castle and headed to the old station buildings to a diversion which avoids walking along the A6136. The path was on the bed of the old railway track and was a lovely amble of just under a mile before we rejoined the official route at a sign just before the Sewage Works. Once past the green fence line of the Sewage Works the path hand railed the Swale for a while through woodland before entering a military training area. The walking here was very pleasant, heading over fields to reach the small village of Colburn. The village pub understandably was shut therefore we pressed on to reach a farm track. Ahead of us we saw a large group of walkers off the path to the left resting up and we knew instantly who they must be - the HF group.​ 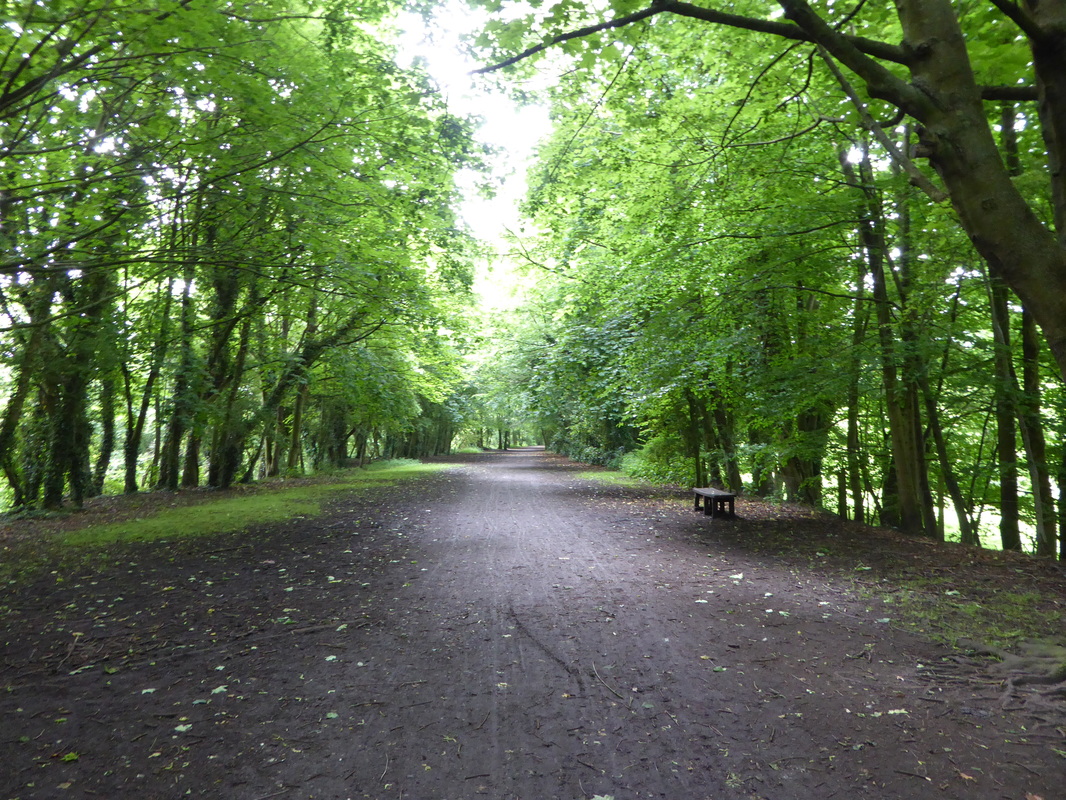 The detour along the disused railway track...... 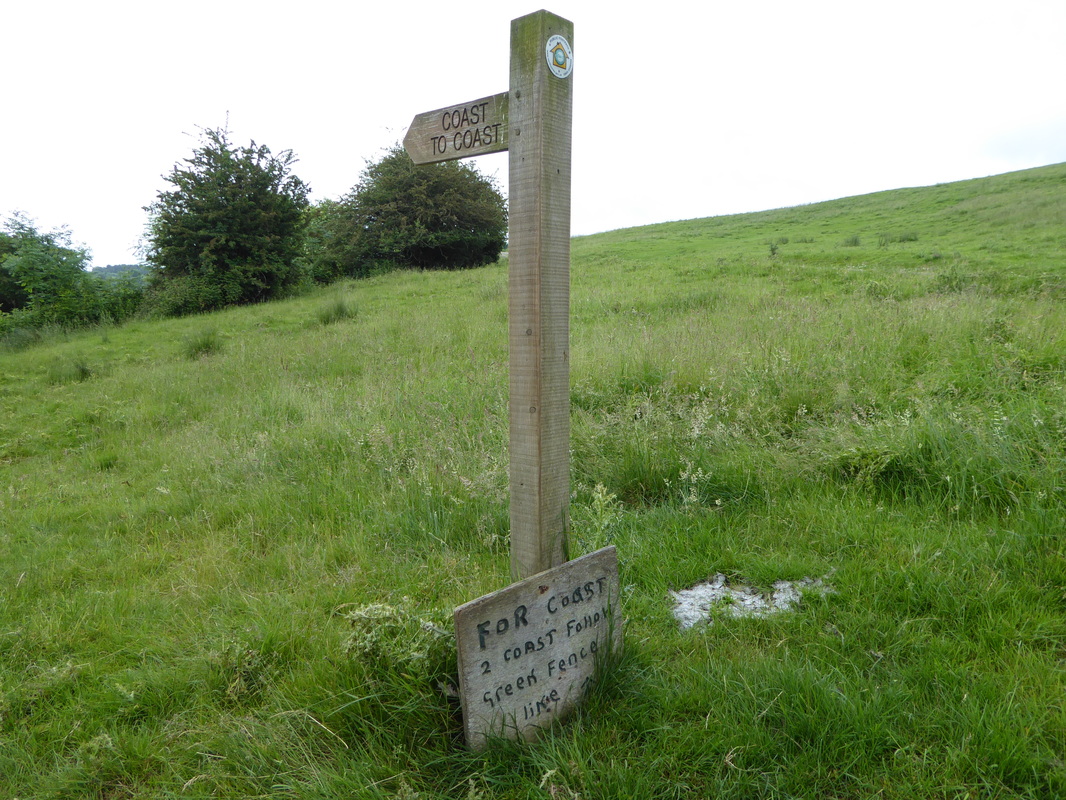 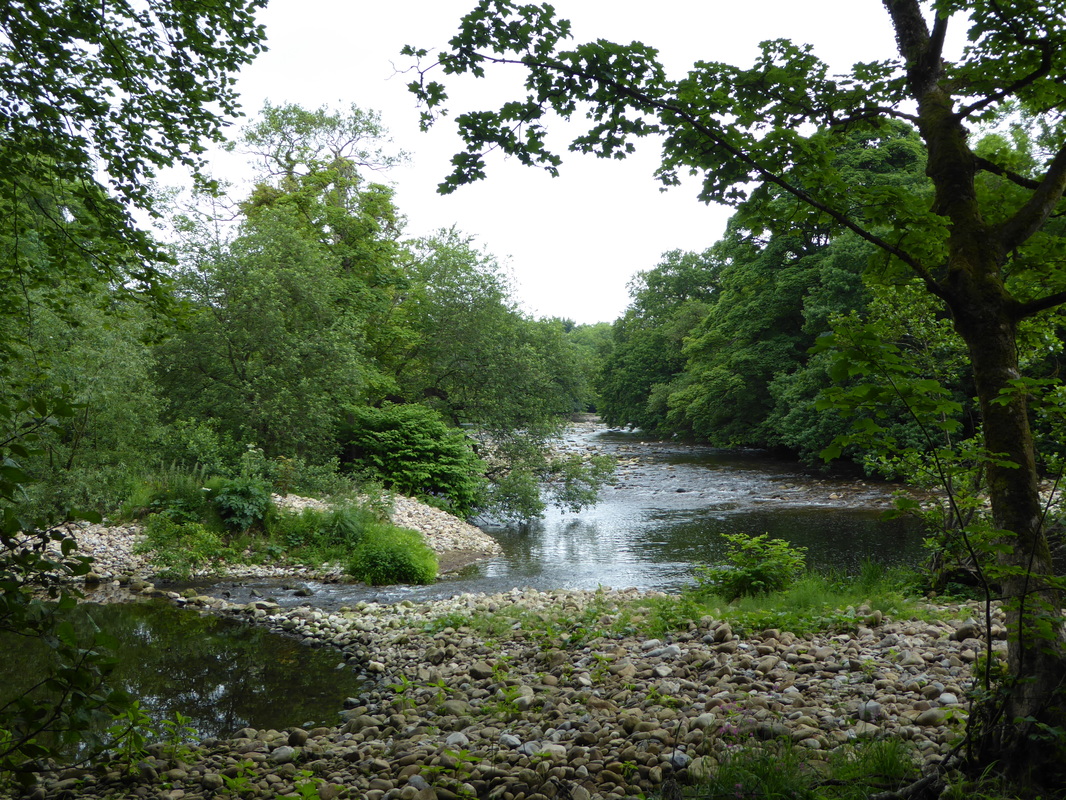 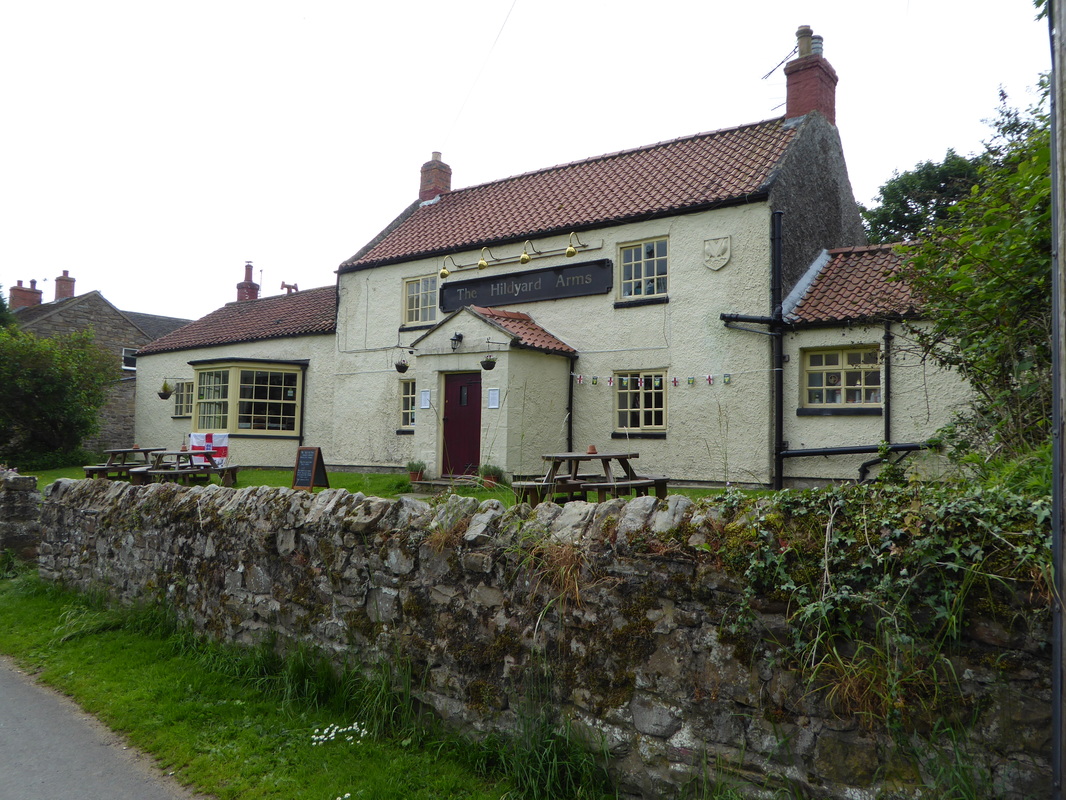 The Hildyard Arms at Colburn - shut!  Well it was only 1030.
We could see the flagpole at St Giles Farm ahead and headed towards the various farm buildings. It was here we had to divert slightly because a herd of cows were obstructing the gate therefore we used another gate which took us on to the farm drive. Normally the route from the farm would head over fields and eventually arrive at the A1 which is crossed by way of a path underneath the busy road. However, the Highways Agency were carrying out some major road works on the A1 therefore a diversion was in place which circumnavigated the area. We had already downloaded the diversion instructions before leaving home however these were clearly displayed at the start of the amended route.

There is not much to be said about the diversion - crossed the extremely busy A1 via a temporary bridge to deliver us right by Catterick Racecourse where we rejoined the official route at Catterick Bridge. Passing the Catterick Garrison Railway Sculptures, we crossed the road and dropped down to a grassy path to meet up with the Swale once again. After about a mile the route joined the B6271 to divert around a quarry then met a track which took us into the pretty village of Bolton-on-Swale. Heading up the lane to the village church and the Henry Jenkins Memorial, we could see a pair of walkers ahead of us - this was Alison & Rob from Australia and we would see them off & on over the next few days and at the finish in Robin Hood's Bay.​ 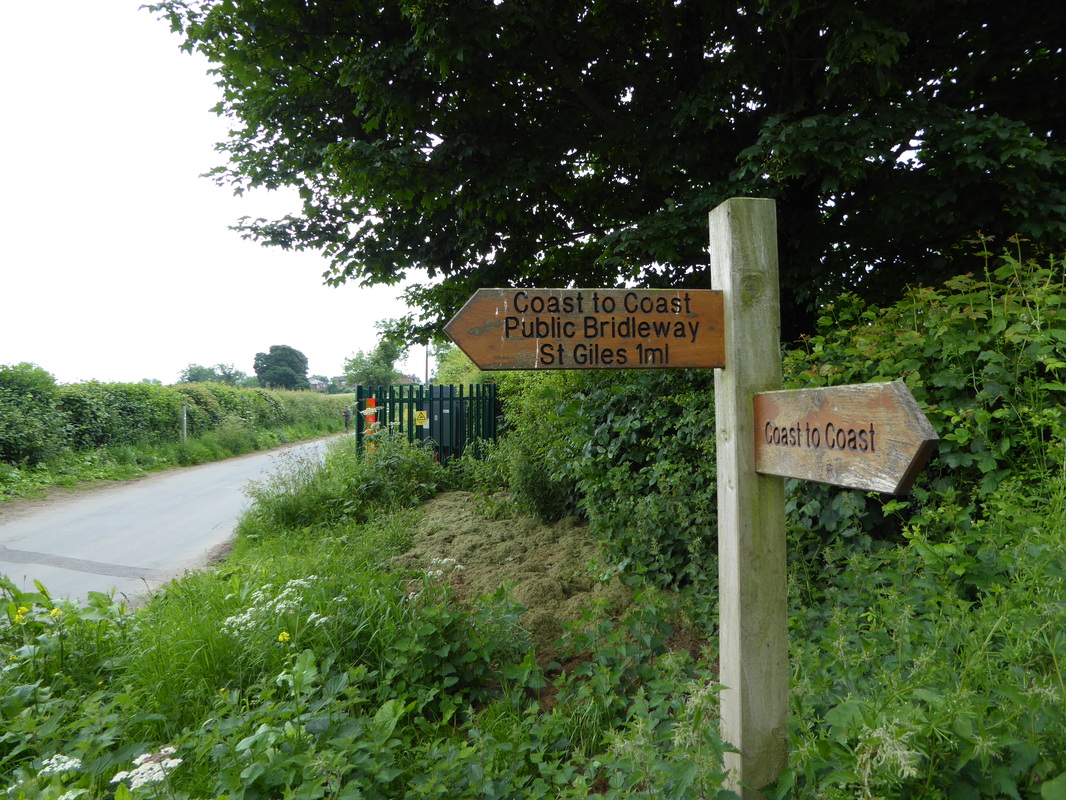 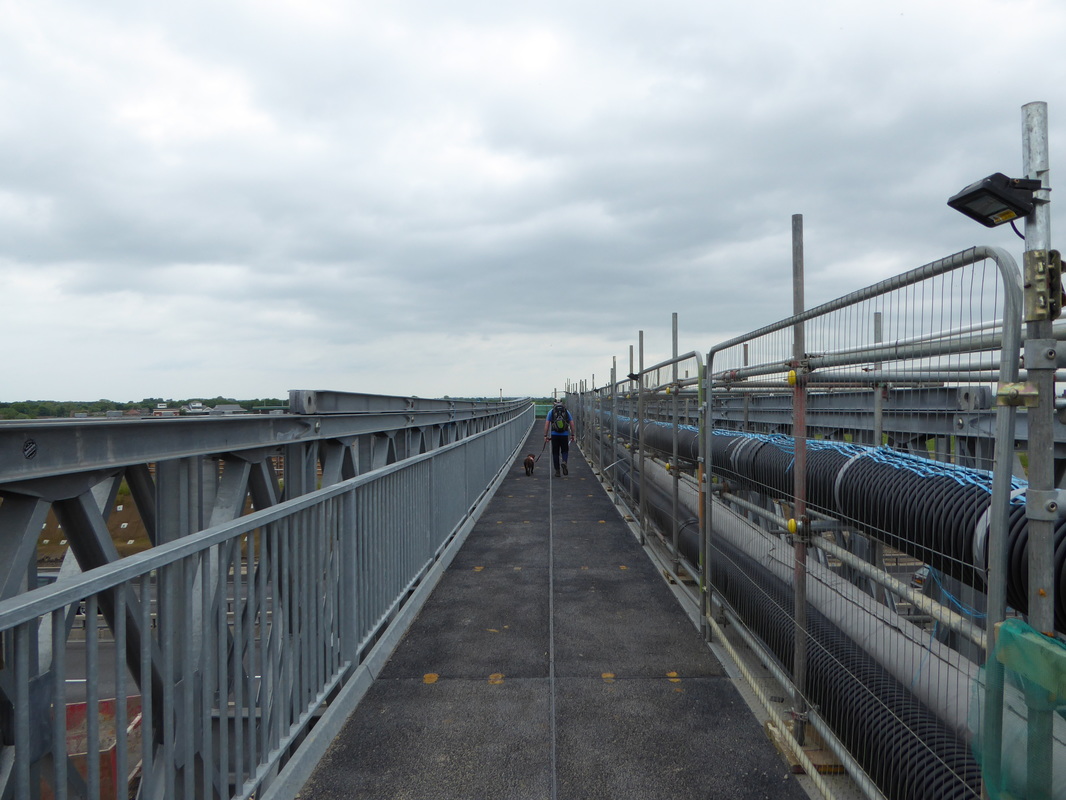 Passing over the A1 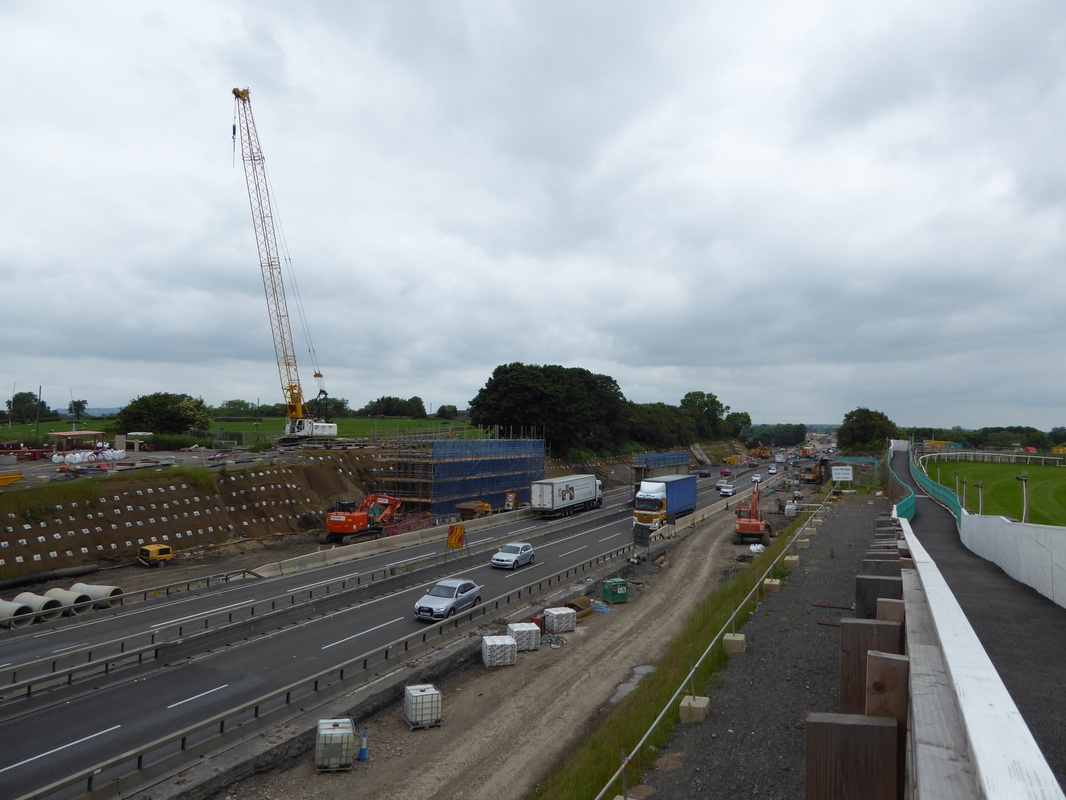 What a mess - sooner we are clear of this the better 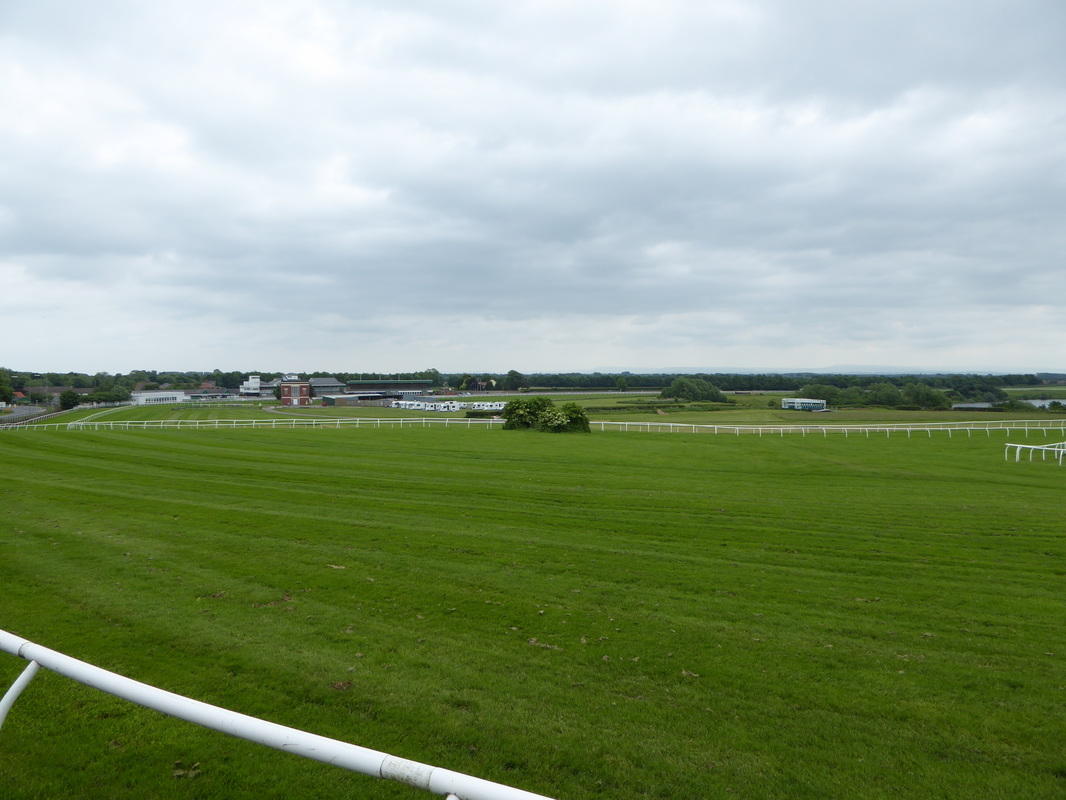 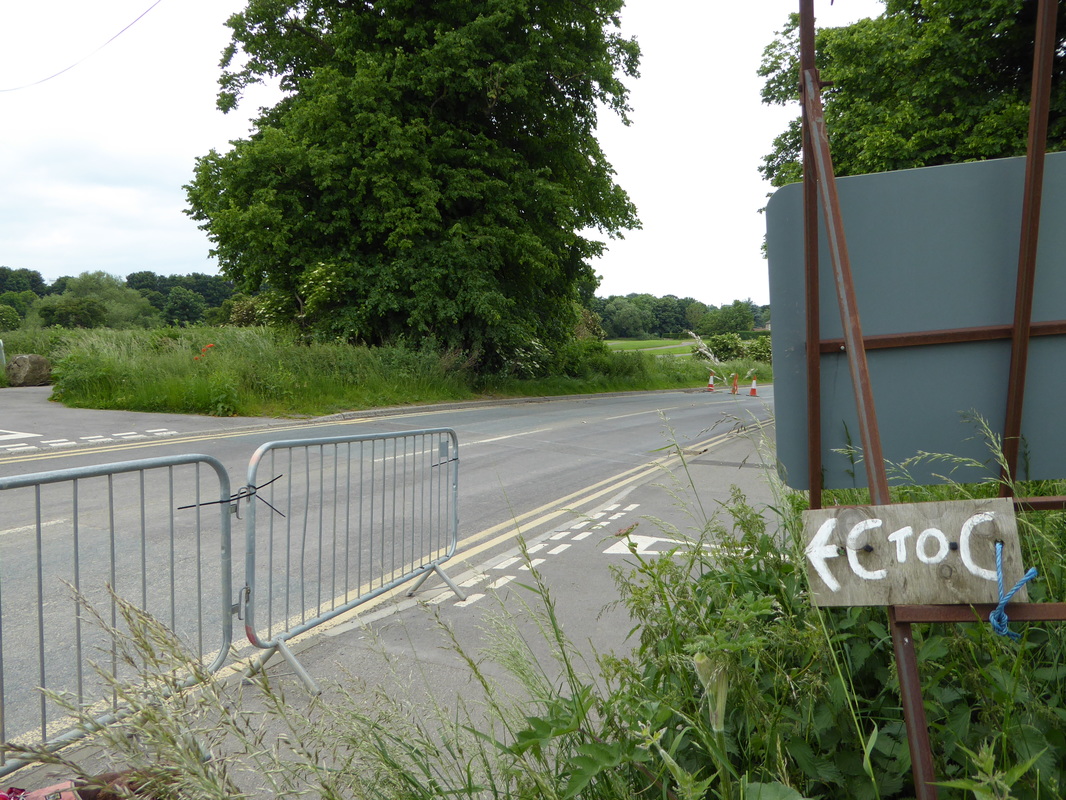 The diversion was very well signposted 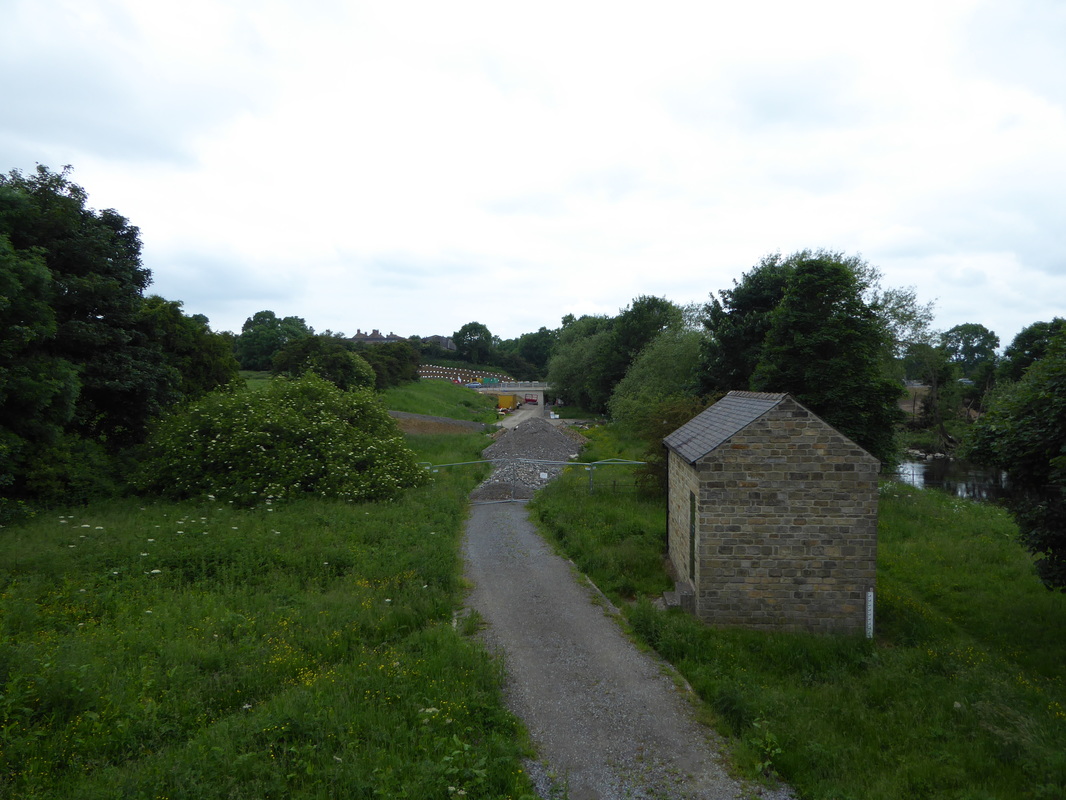 Looking back to the original route - no way through there 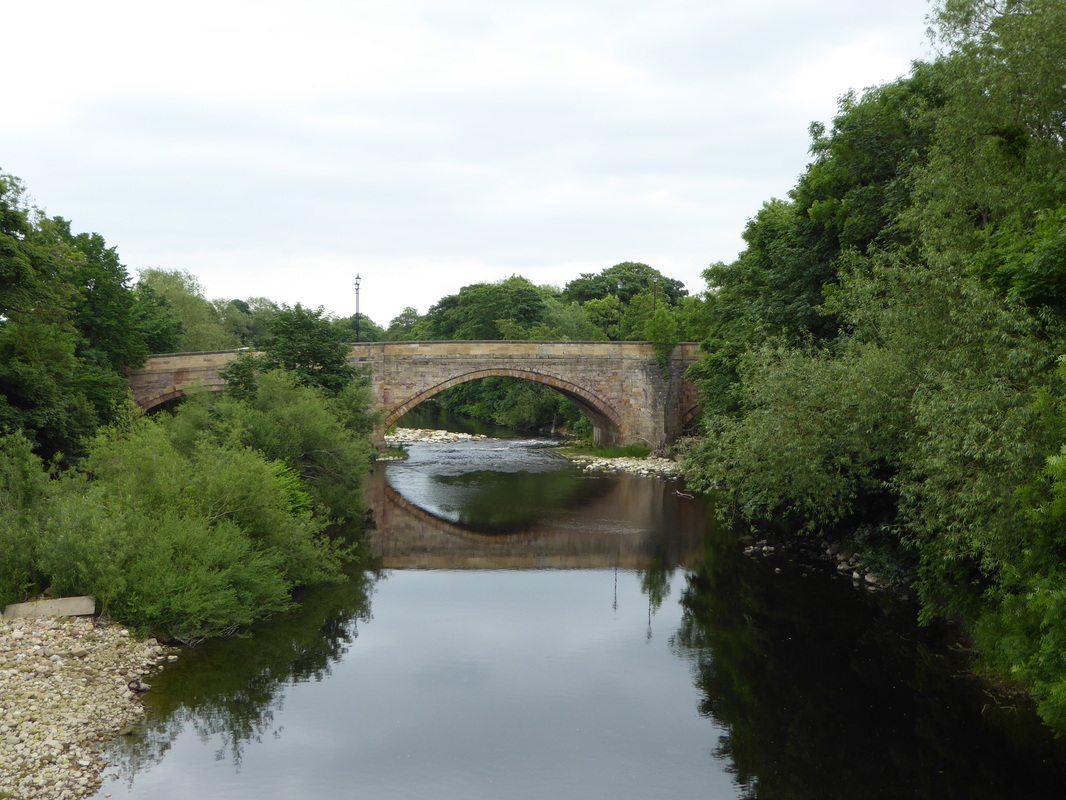 Catterick Bridge
The memorial to the Catterick Garrison Railway, a line which during its life (1915-1967) carried over a million troops and many thousands of tons of equipment to and from the Garrison. The important role of the Army in the life of the local area, both in the past and in the present day, is commemorated in a “Portrait Bench” installed on the north bank of the river next to the bridge. This shows three figures, a Roman Legionary (Cataractonium Fort is close by), a First World War “Tommy” and a modern British infantryman.
Meeting the locals at Bolton-on-Swale 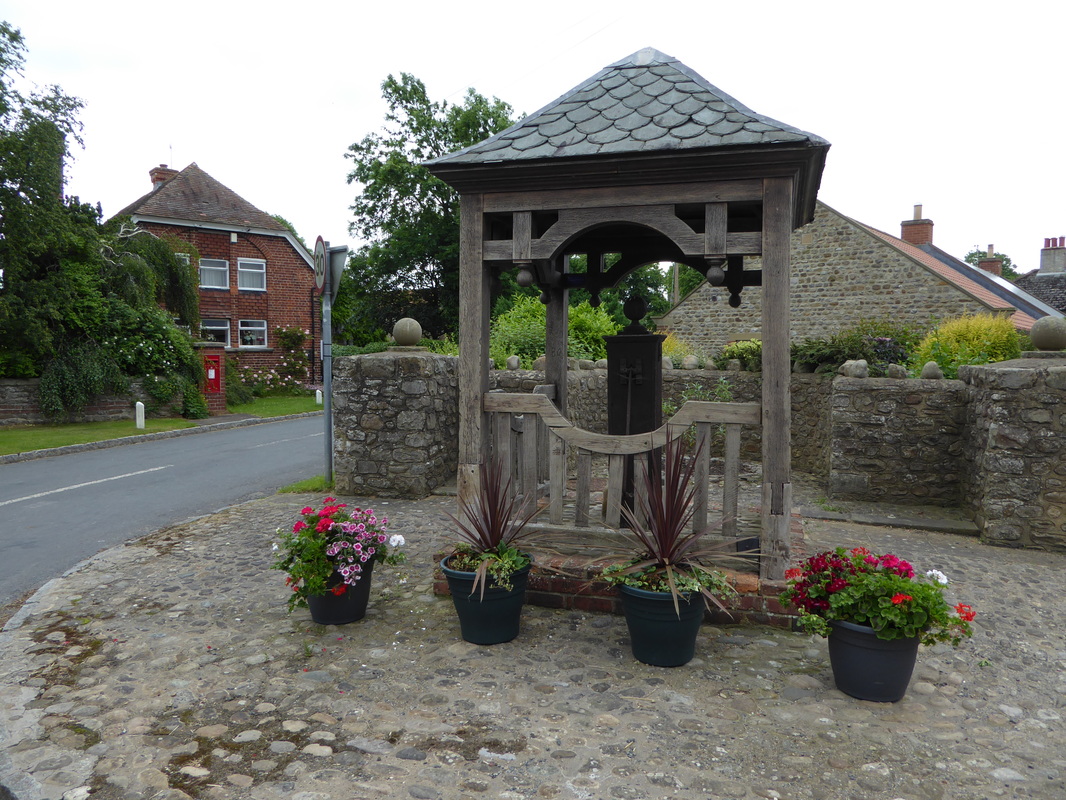 The old village pump in Bolton-on-Swale 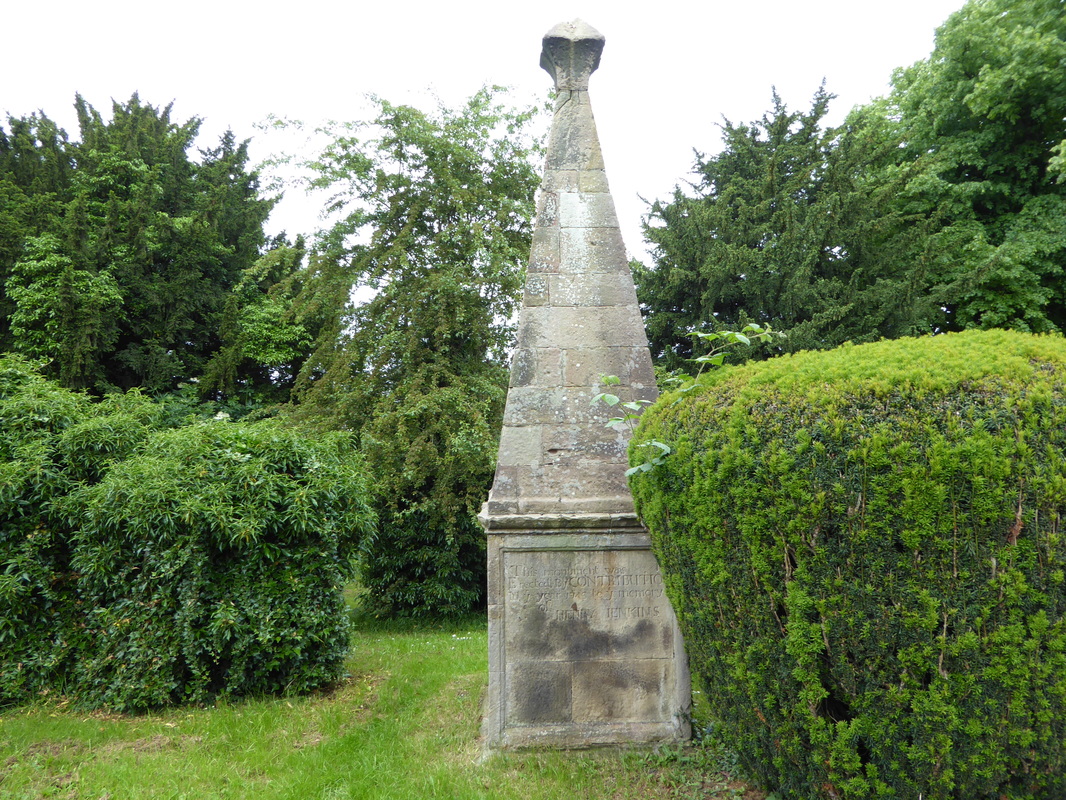 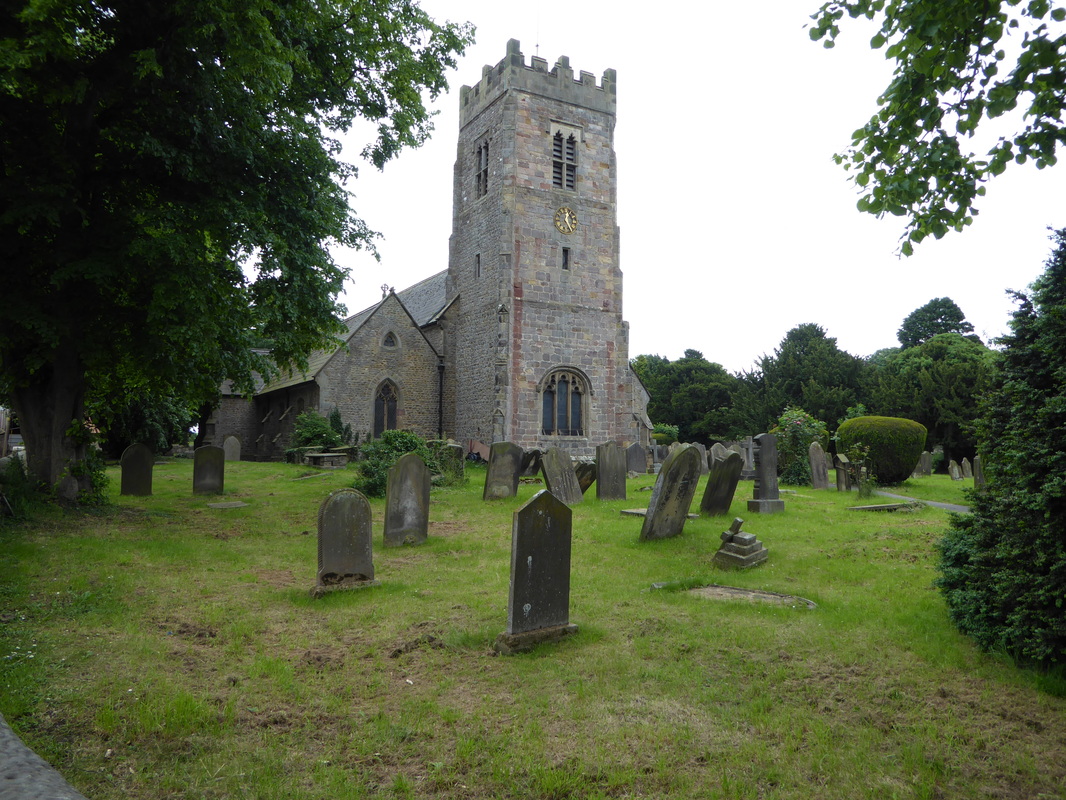 St Mary's Church, Bolton-on-Swale
From the other side of the village the route now headed over fields for just under a mile to reach a road. This was the start of a long stretch along the tarmac as far as Streetlam although to be fair no traffic passed us at all. Near Whitwell we passed the 2 walkers we saw a few days ago near Nine Standards Rigg and shortly after met up with the Kiwis who were having lunch behind a hedge. The road continued, on and on it went until we reached Streetlam where we joined a sometimes boggy path over fields to emerge onto the main road.​ 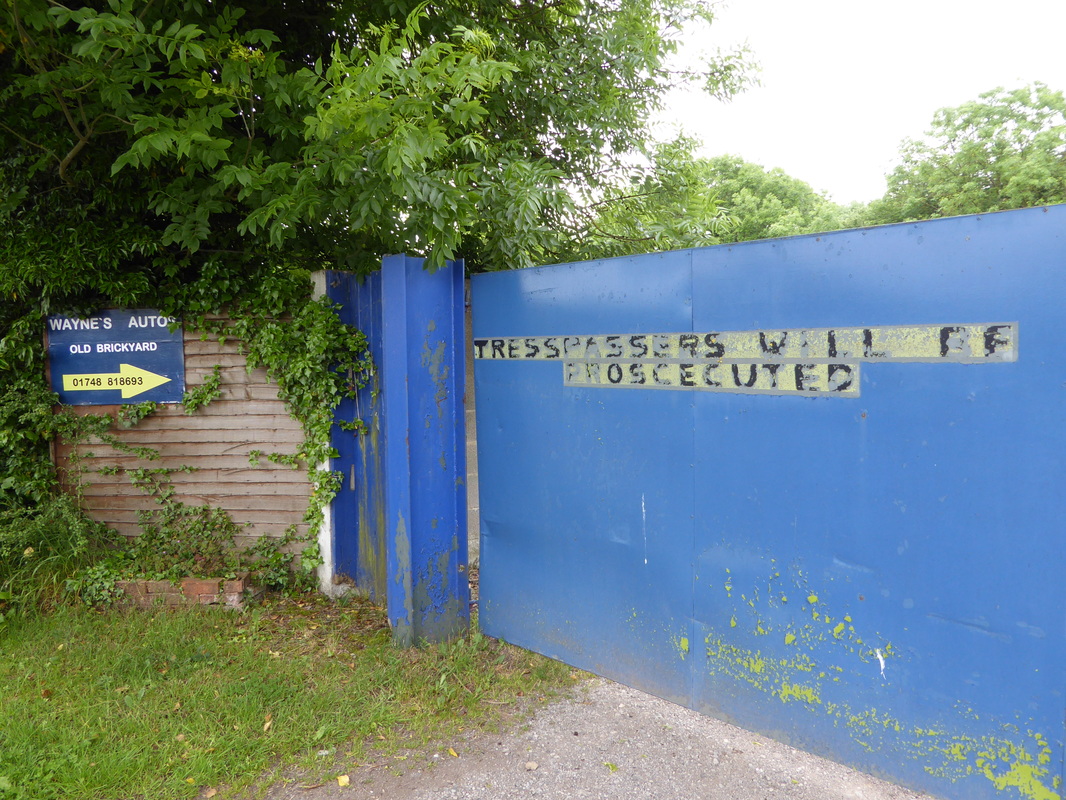 4 years on and the spelling still sucks 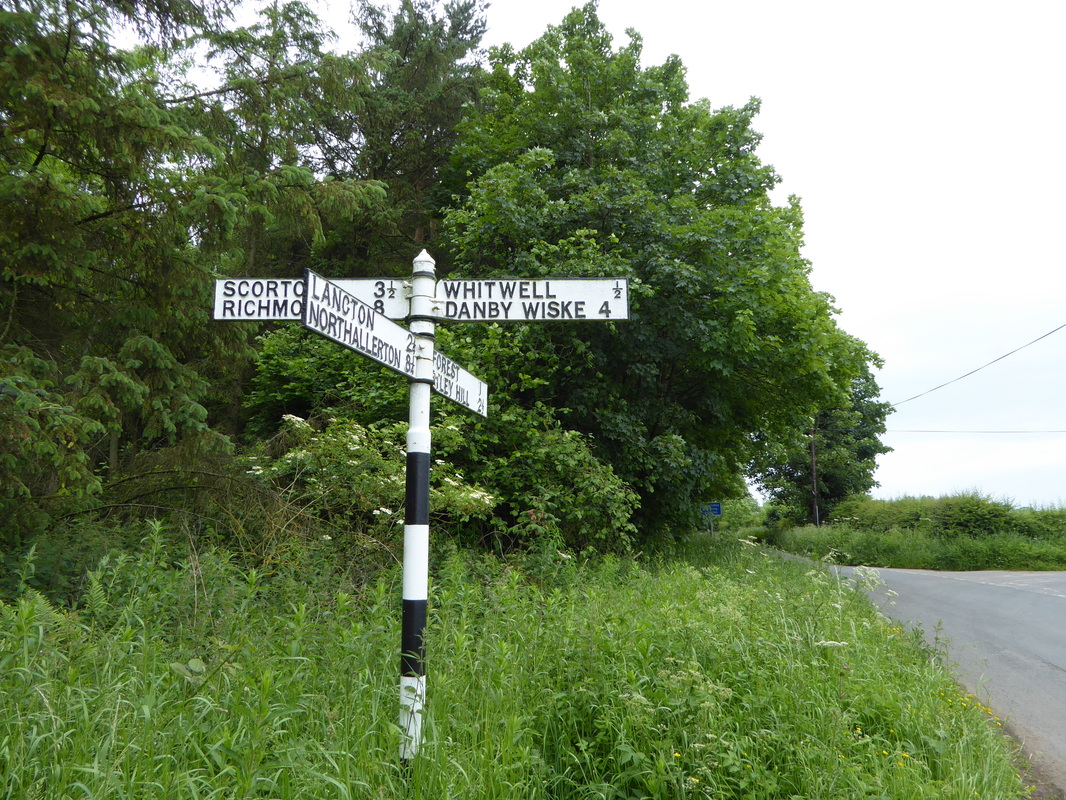 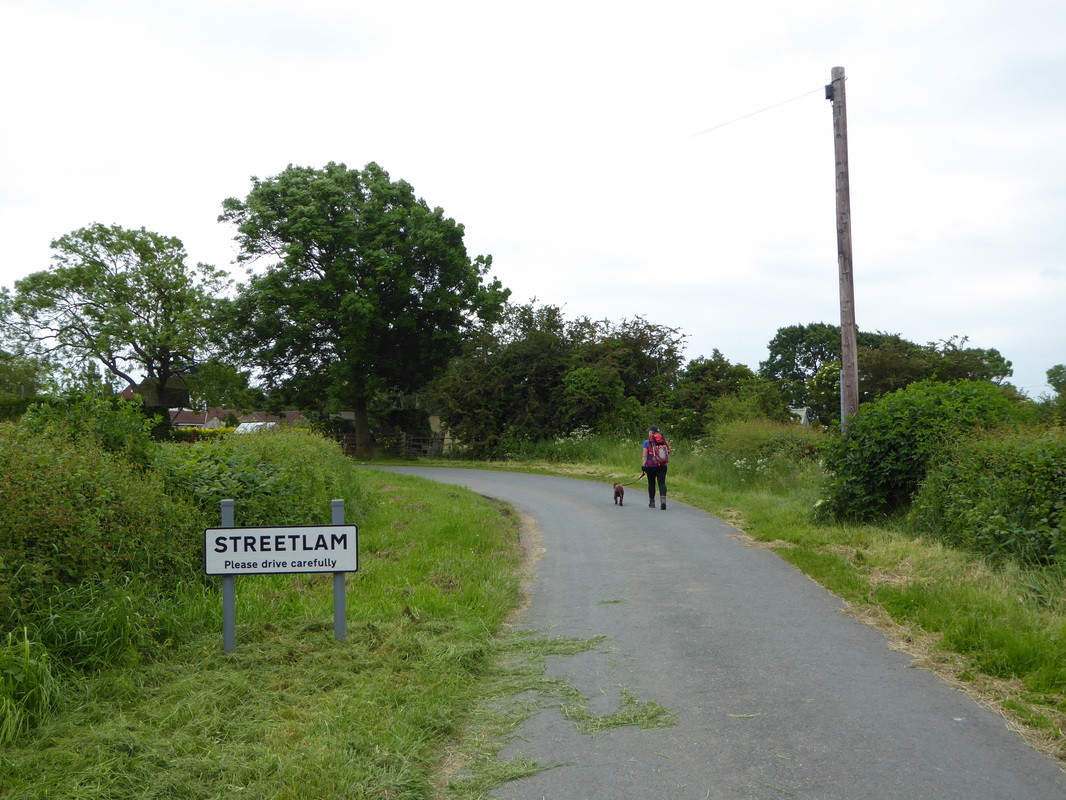 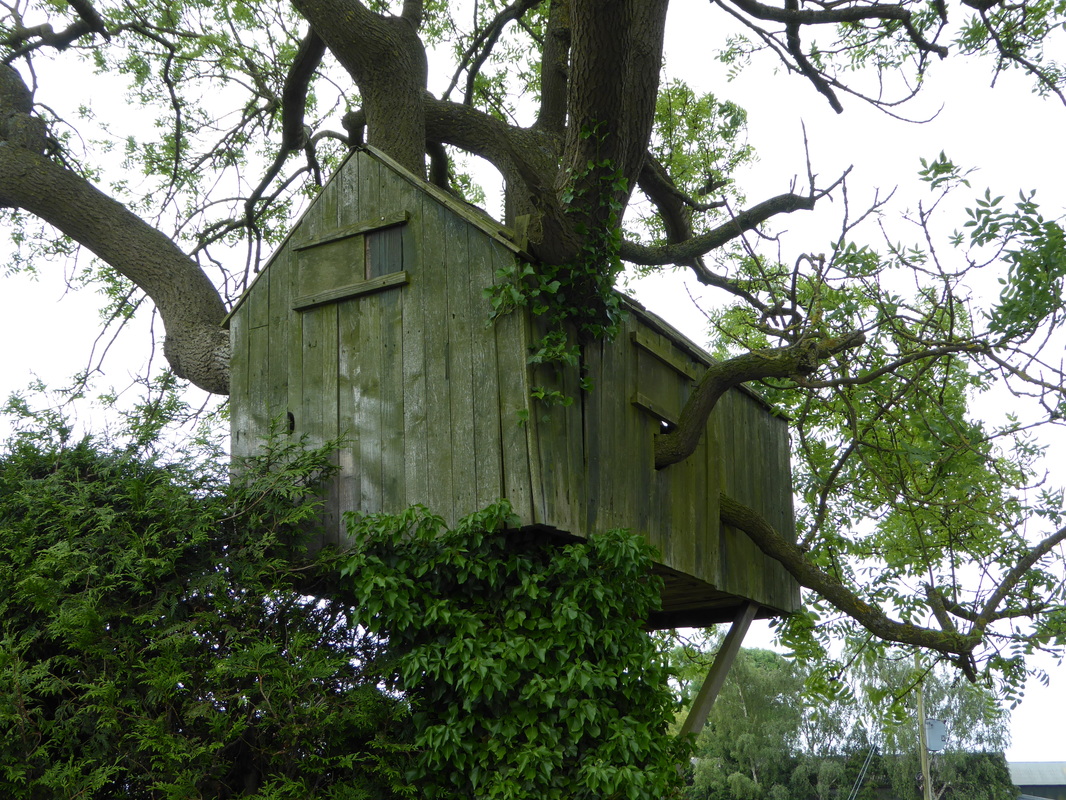 Austere accommodation in Streetlam - would probably sell for £100k in London 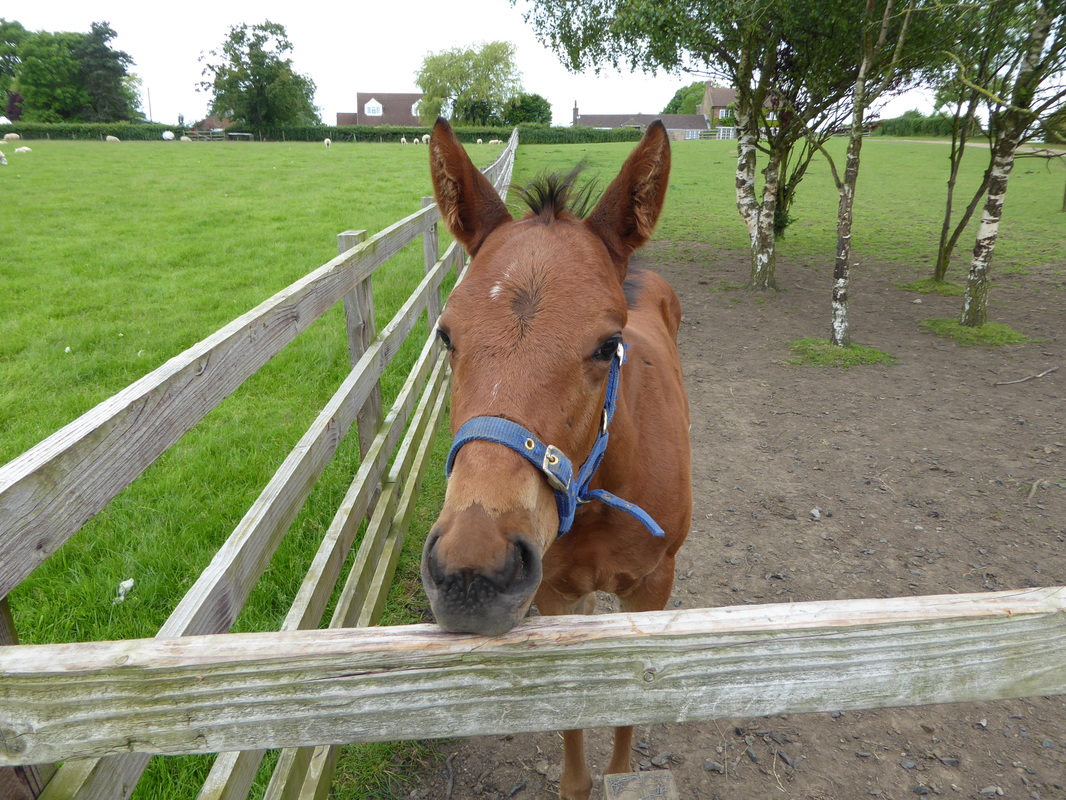 A friendly pony says hello as we leave Streetlam
Half a mile later and we arrived at the end of todays walk, The White Swan in Danby Wiske. As we arrived 2 walkers asked us "Where's the Shop" - we informed them unfortunately there wasn't one but the pub was open!! We had made good progress today - 14 miles in just 5 hours - the terrain had certainly flattened out! There was nothing else for it but to enjoy a nice cold one and we were soon joined by our fellow travellers for impromptu drinks. We had arranged to stay 2 nights at Ingleby Cross therefore Mike from our B&B picked us up promptly at 1515 and ferried us over to our digs for the night. As is customary when arriving at Park House we were given a glass of bubbly prior to settling in to our room. 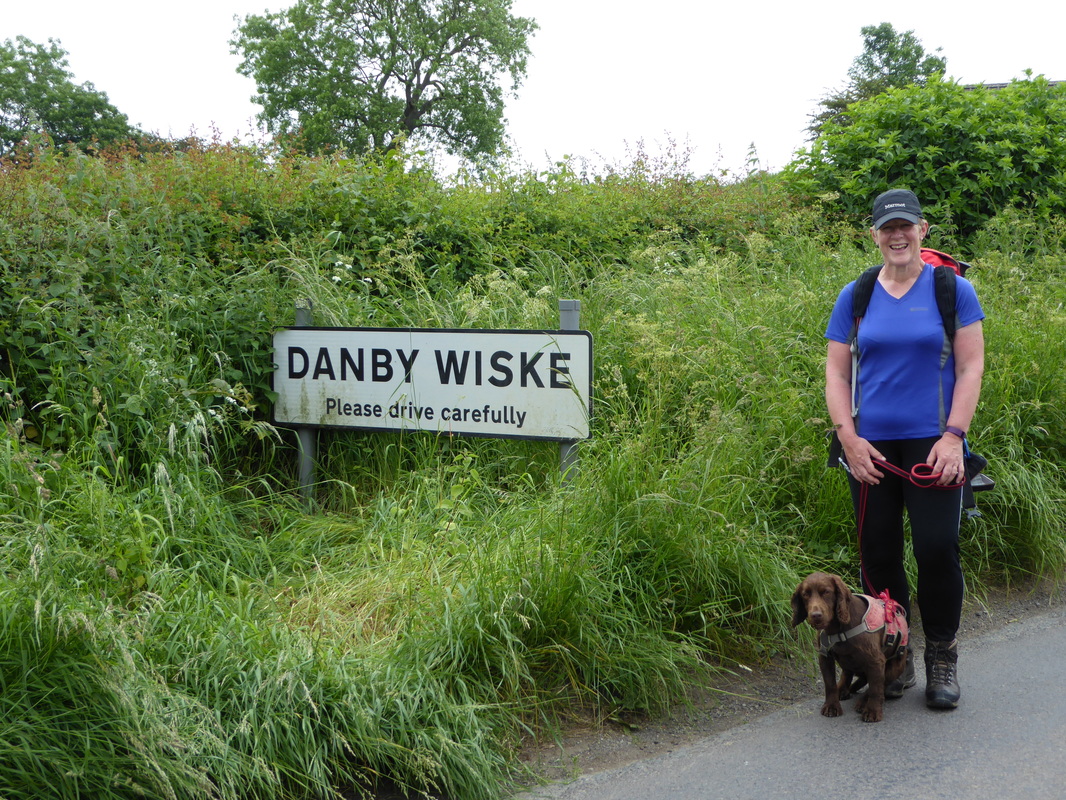 And here we are - journey's end for today 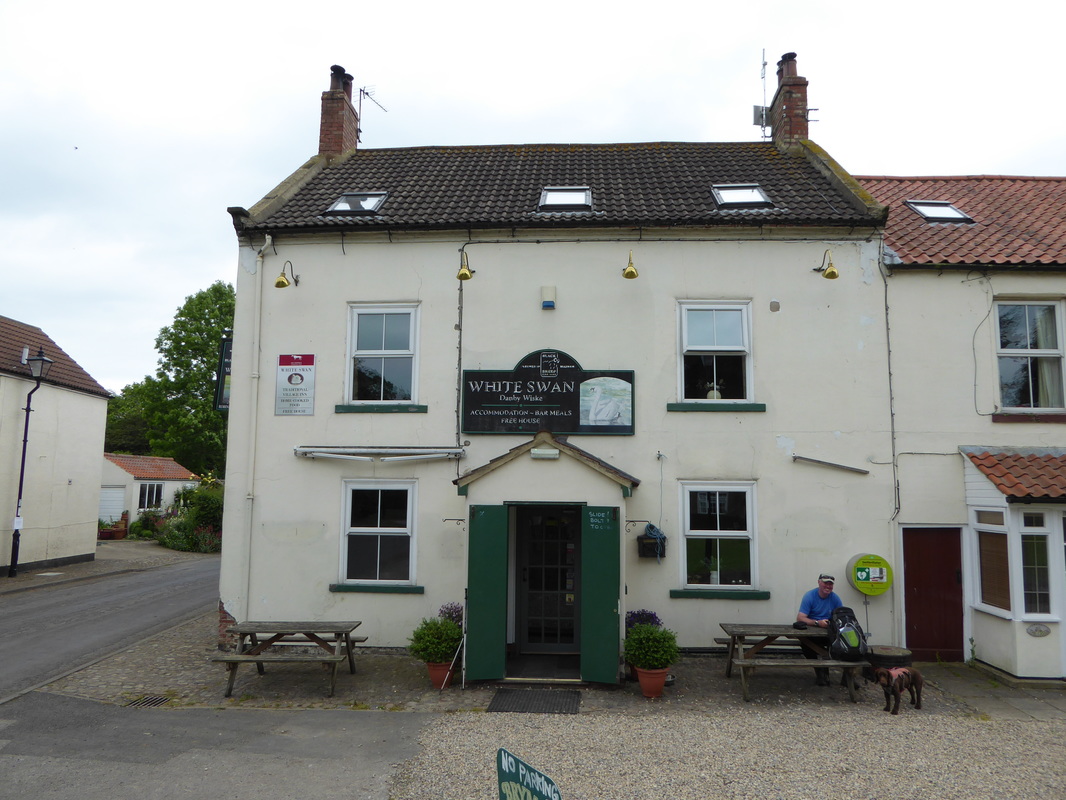 The village pub in Danby Wiske 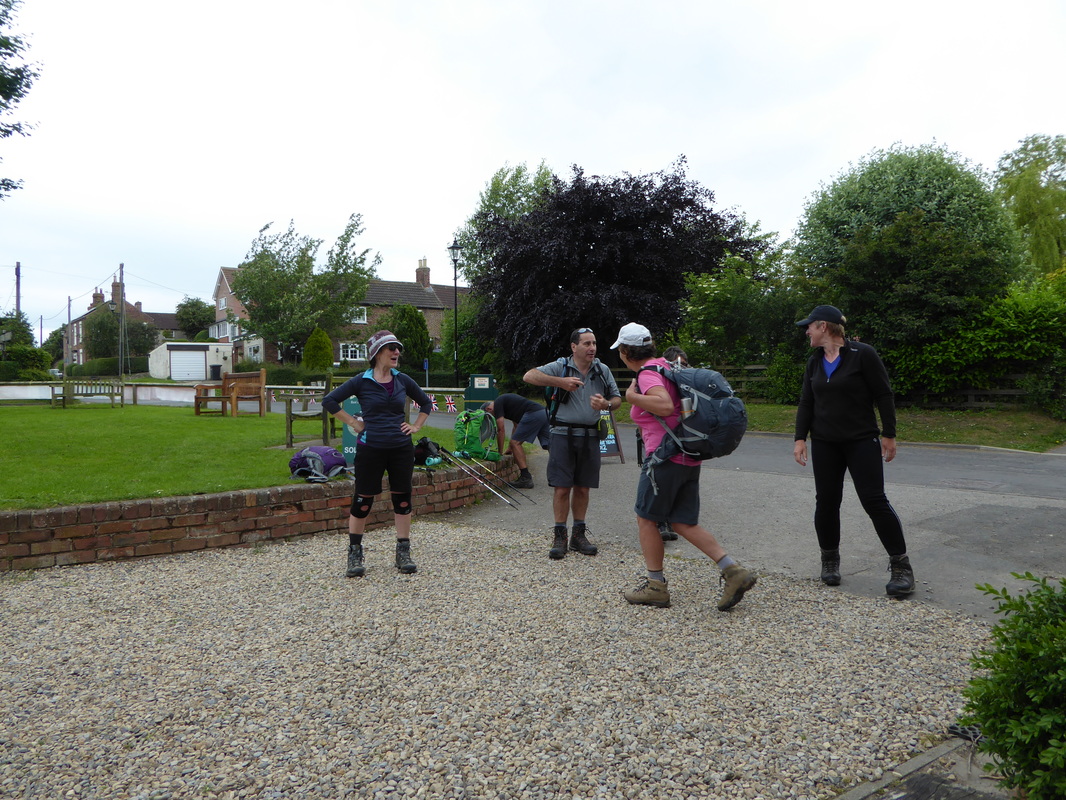 Meeting up again with fellow Coast to Coasters at Danby Wiske 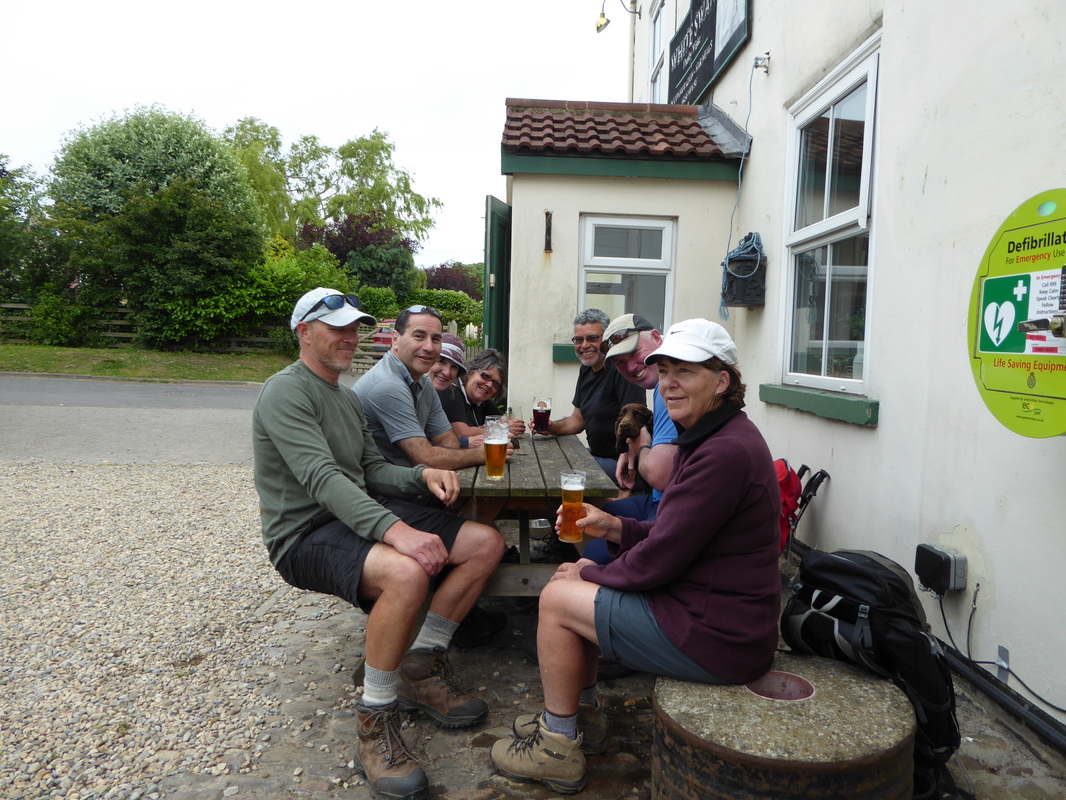 With the Kiwis at Danby Wiske
Later that evening we had dinner at our B&B and were joined by Chris & Elaine from Hull plus an Australian chap who were also doing the Coast to Coast.  The meal was superb and beautifully cooked by Di who was our hosts Mum.  Just as we were finishing up we were joined by another walker - this was Zander from Holland who was walking on his own.  A lovely evening spent in great company.
Overnight Accommodation 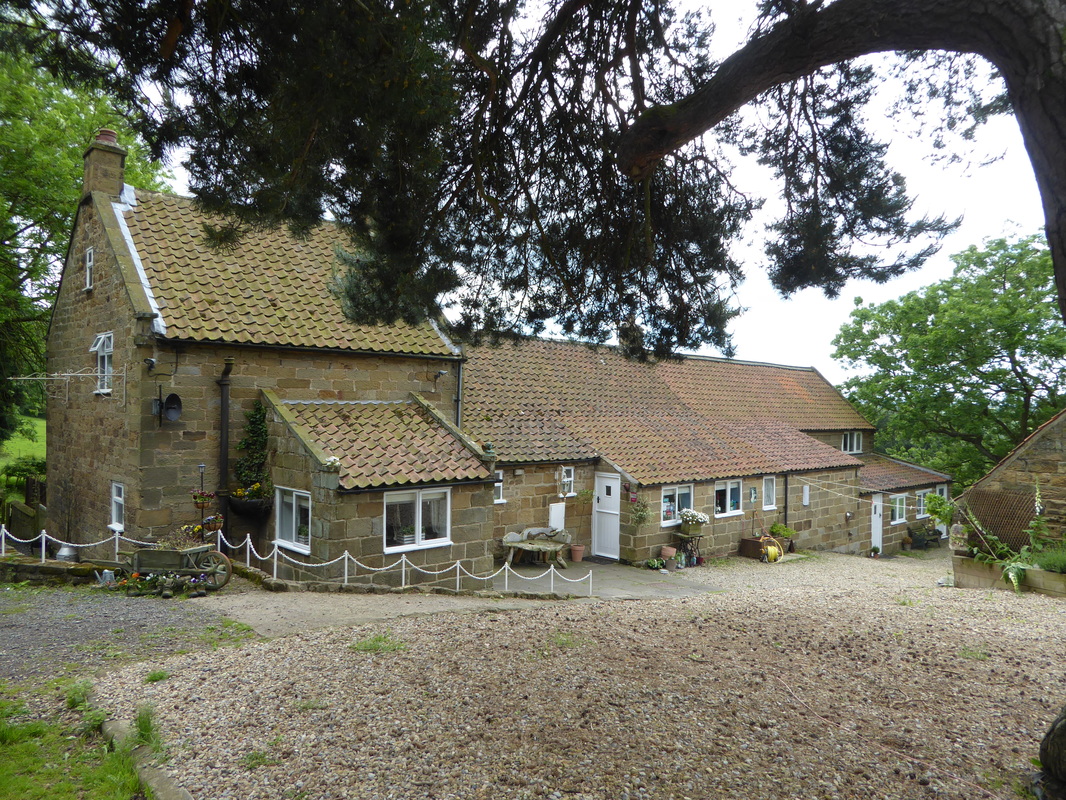 We stayed here in 2012 and are so glad we were able to stay here again. We arranged 2 nights here and Bev & Mike could not do enough for us - they sorted out a pick up & drop off at Danby Wiske, provided superb evening meals plus they are licensed. The residents have a separate lounge too. A fantastic B&B.​
Day 9 Data