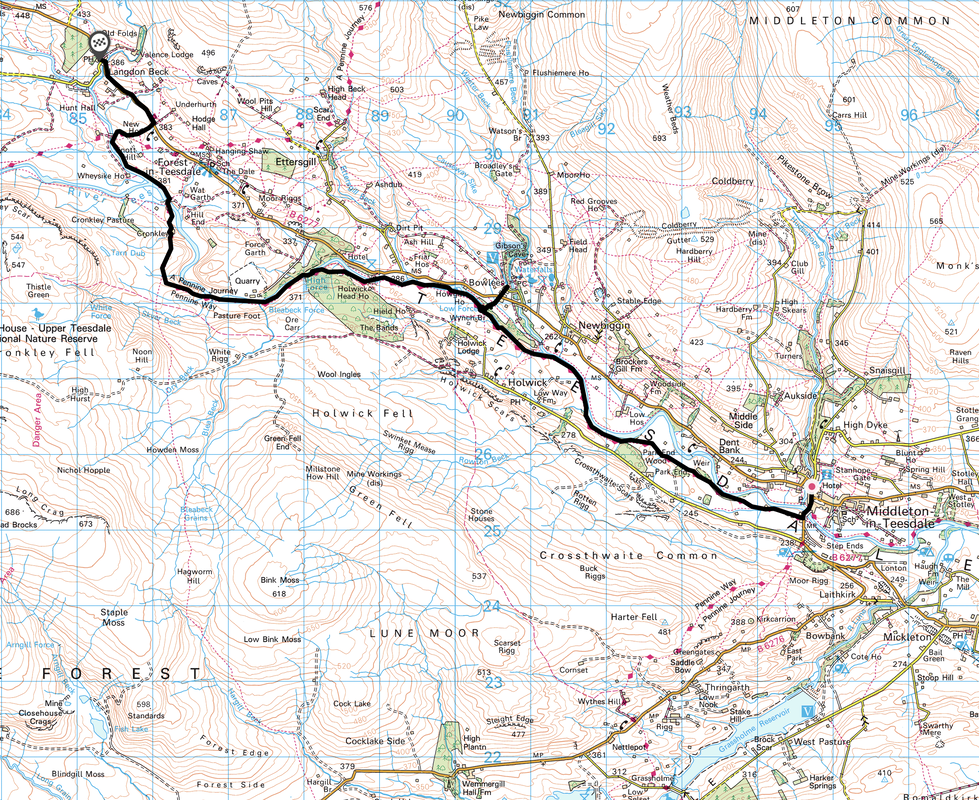 A shorter than average day today over terrain that was mainly flat and very scenic. We had an ok stay in Middleton - the hotel felt tired and needed a bit of investment however like our previous stay here in 2015 the food was very good. As we were leaving, the HCPB & Chris were readying themselves for the off and we therefore let them crack on as we were in no rush today. Whilst waxing Fudge's paws outside the hotel we had a quick chat to a couple of Geordie lads who were walking part of the Teesdale Way.

After purchasing a pie from the Butchers we were off and regained the route down at the County Bridge. Almost immediately we bumped into an interesting character called Neil and during our chat he tried to offload a piece of his kit to us, namely a knackered old roll mat - I told him there were plenty of bins in Middleton. Neil had set off from Swansea a few weeks ago and was heading for John O'Groats - he told us he was wild camping and had decided to take a break from his job as a Writer, Illustrator & Narrator of Children's Books. It was nice to chat to him and we asked him where he was off to next - he basically didn't know, just wherever his walk took him as long as he was heading North.

We continued on along the beautiful bank of the Tees to reach the Wynch Bridge at Low Force. We knew that by crossing the bridge we would be able to visit the excellent cafe at Bowlees Visitor Centre and so that is what we did. After an excellent drink, Cheese Scone and the sharing of a piece of Lemon Drizzle Cake we retraced our steps back to Low Force. It was busy here as it was along the path to High Force however once past the waterfall we saw nobody else until we arrived at our destination of Langdon Beck. The walk in via Cronkley Bridge is a delight and on reaching Saur Hall Bridge we left the Pennine Way to walk the ¾ mile up the road to Langdon Beck. As the sun was out there was only one thing for it therefore we enjoyed a very pleasant Cider in the Beer Garden before checking in and sorting ourselves out. Pre-dinner drinks were taken back in outside, this time in company with Chris and we enjoyed a lovely sunset over Cronkley Scar. After a very pleasant meal we had a quick chat with the HCPB before retiring to bed. 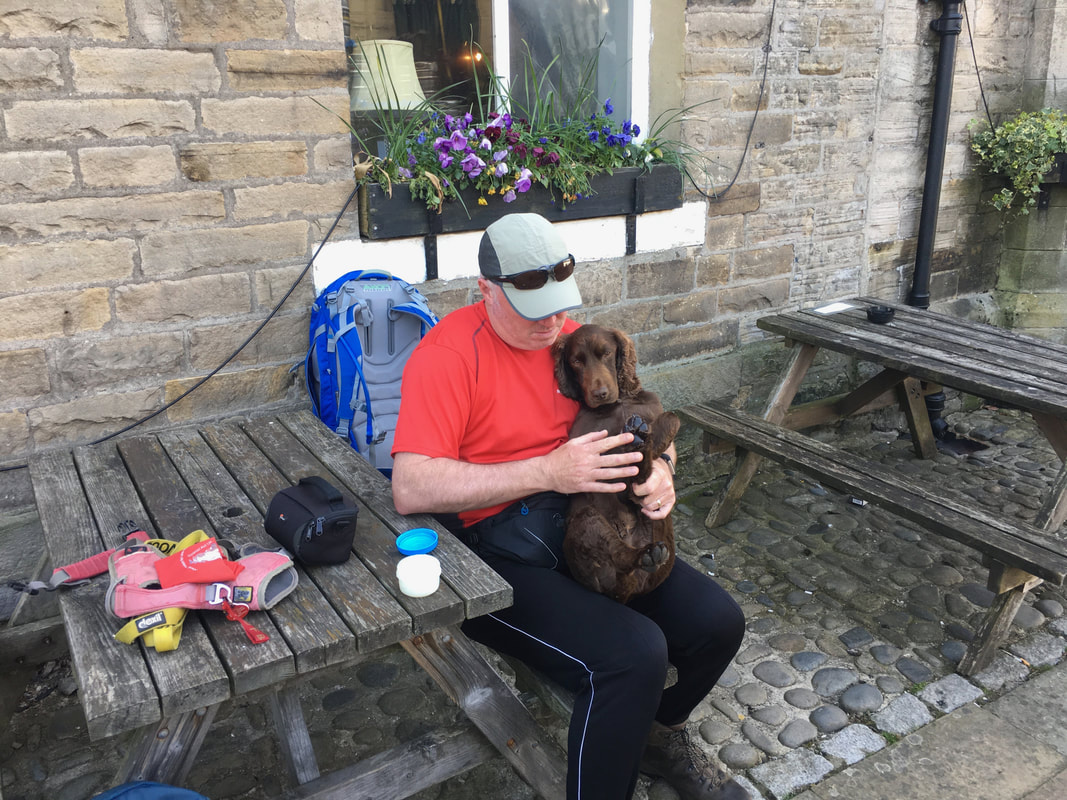 First thing we do before setting off on any days walking is to wax the little chaps paws. This routine pays dividends with no cracking or soreness although judging by the gob on him he tolerates this fussiness rather than enjoys it. 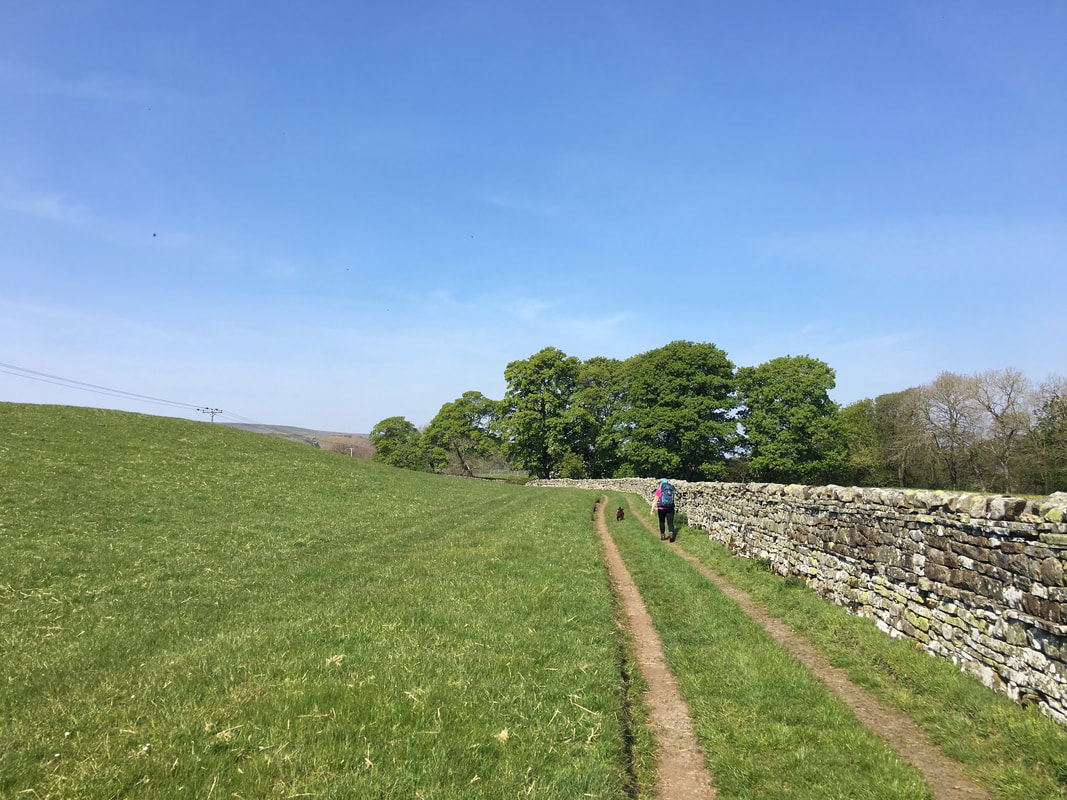 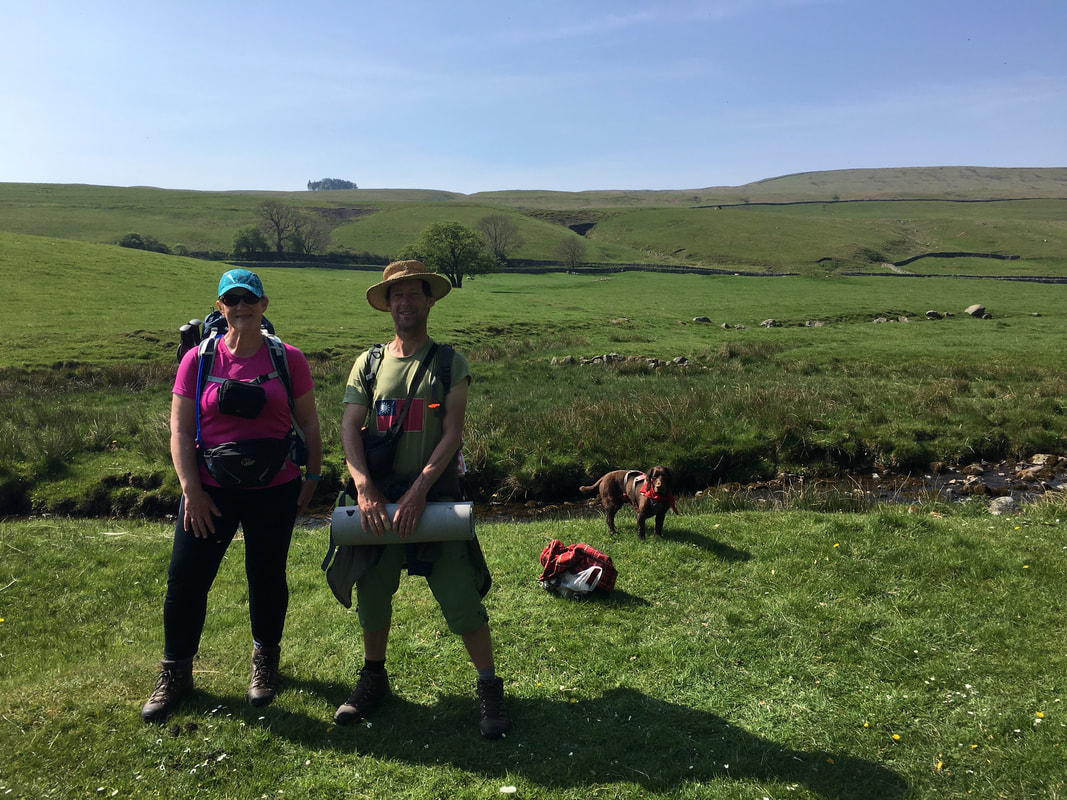 Neil who was walking from Swansea to John O'Groats - in his hands is the knackered old roll mat he tried to palm off on us. 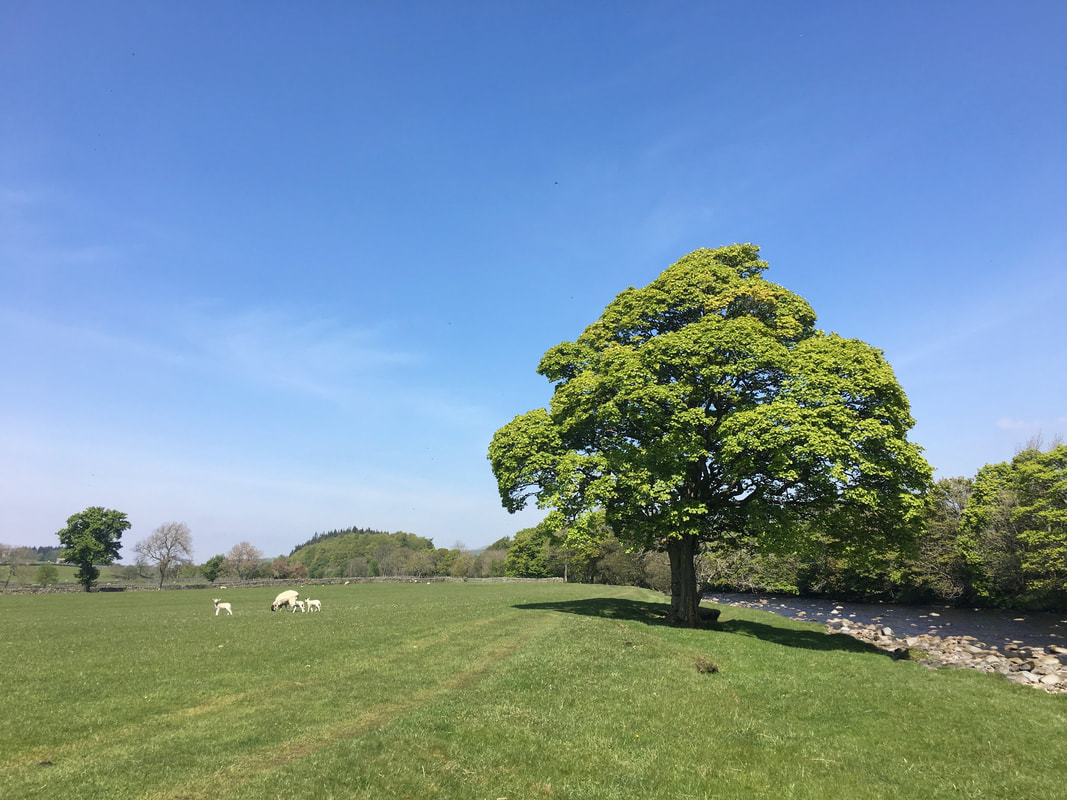 This is a delightful stretch along the Tees near Holwick 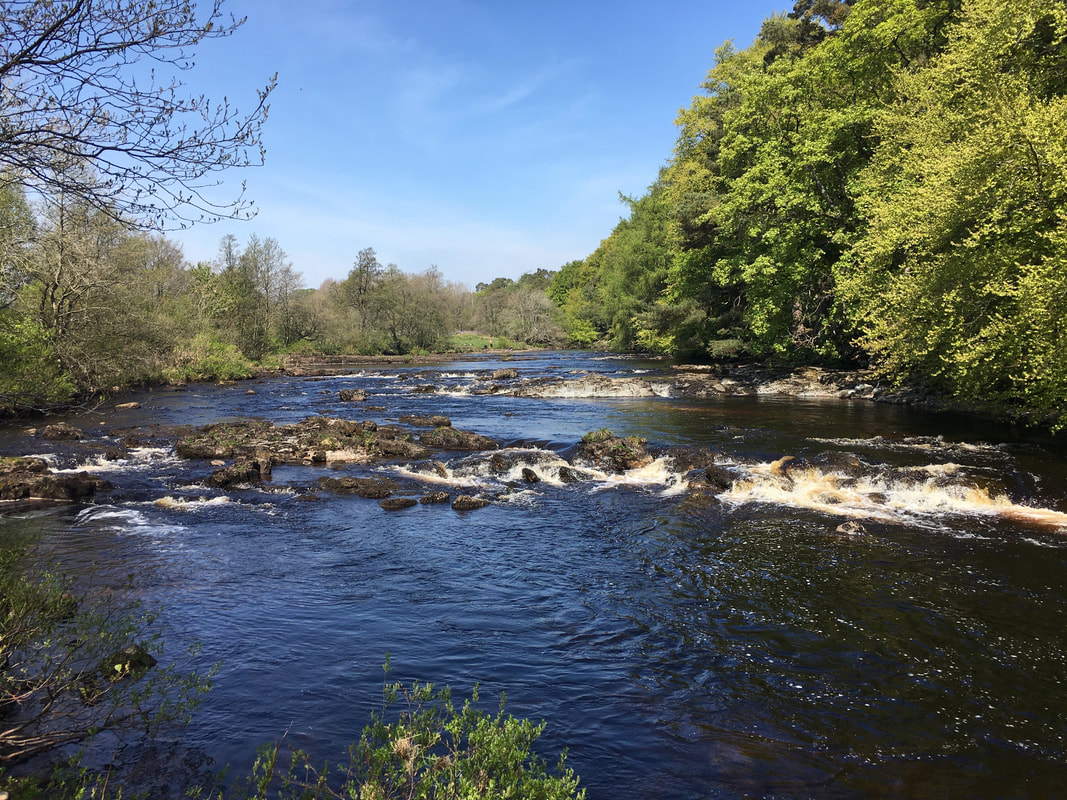 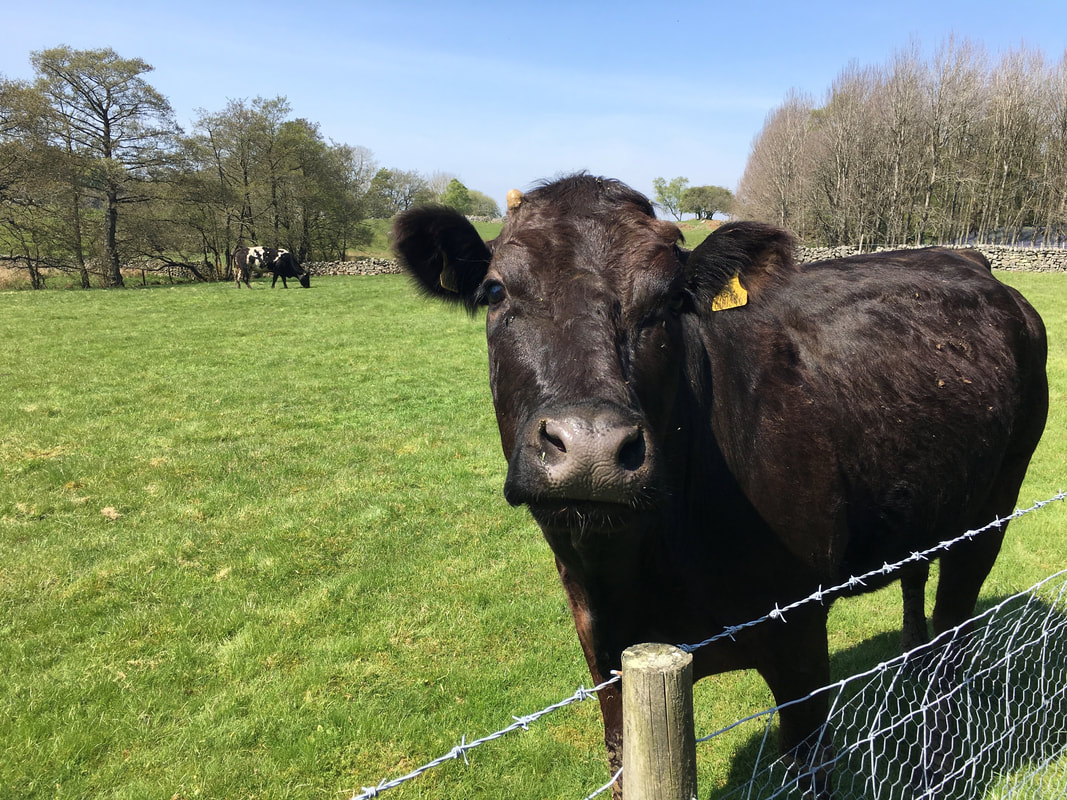 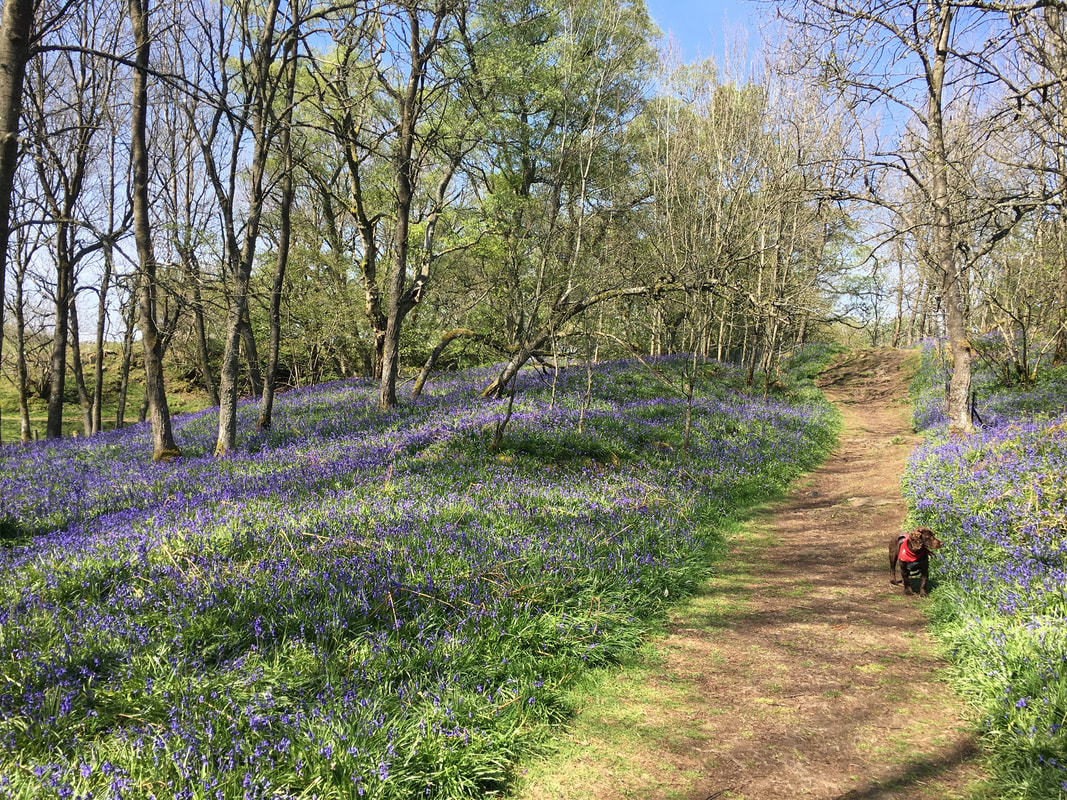 Bluebells along the Tees 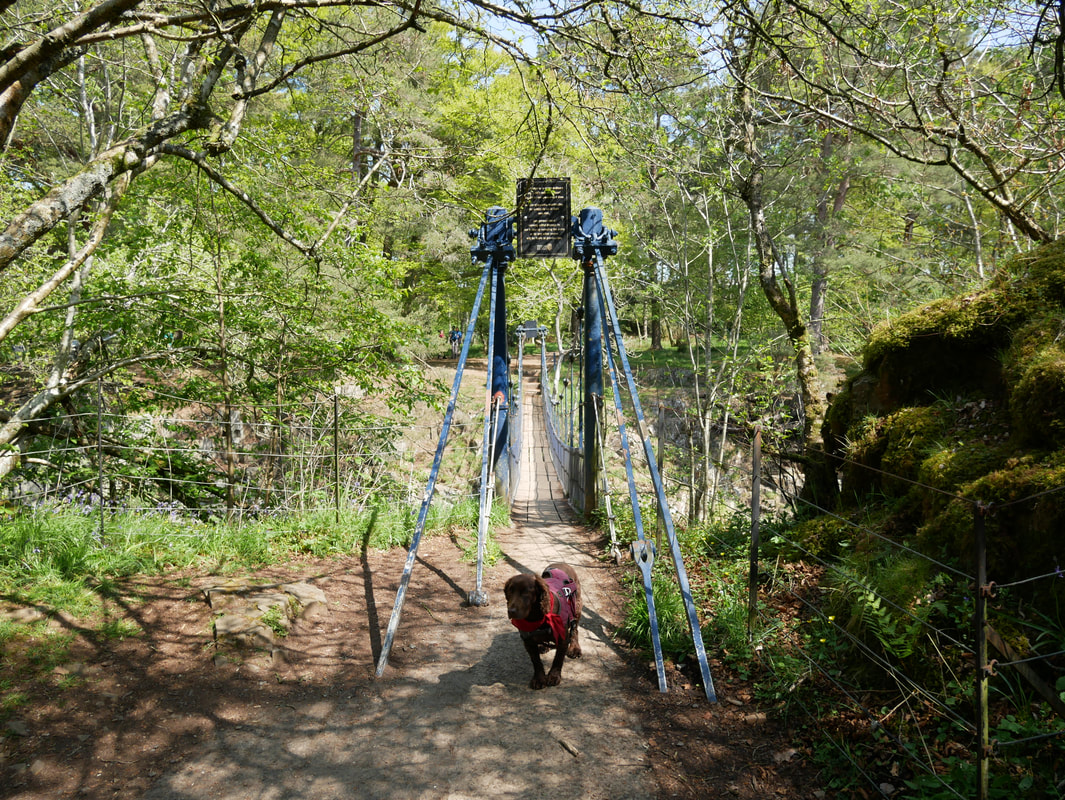 The Wynch Bridge that crosses the Tees near Low Force

The suspension footbridge owes its existence originally to the Holwick lead miners who used it to get to the lead mine at Little Eggleshope in the fells to the north. It spans a ravine overshadowed by trees and the original bridge was suspended on hand-forged wrought iron chains, and reportedly had only a single handrail on one side as support. Built in the mid-18th century it collapsed in 1802 when a chain broke and a man was drowned. The current bridge replaced it in 1830, financed by the Duke of Cleveland with its maintenance paid for by the miners' subscriptions. It has 2 spans and the chains are suspended over cast iron columns and the footway is of timber. The bridge was strengthened in 1992 and is Grade 2 listed.​ 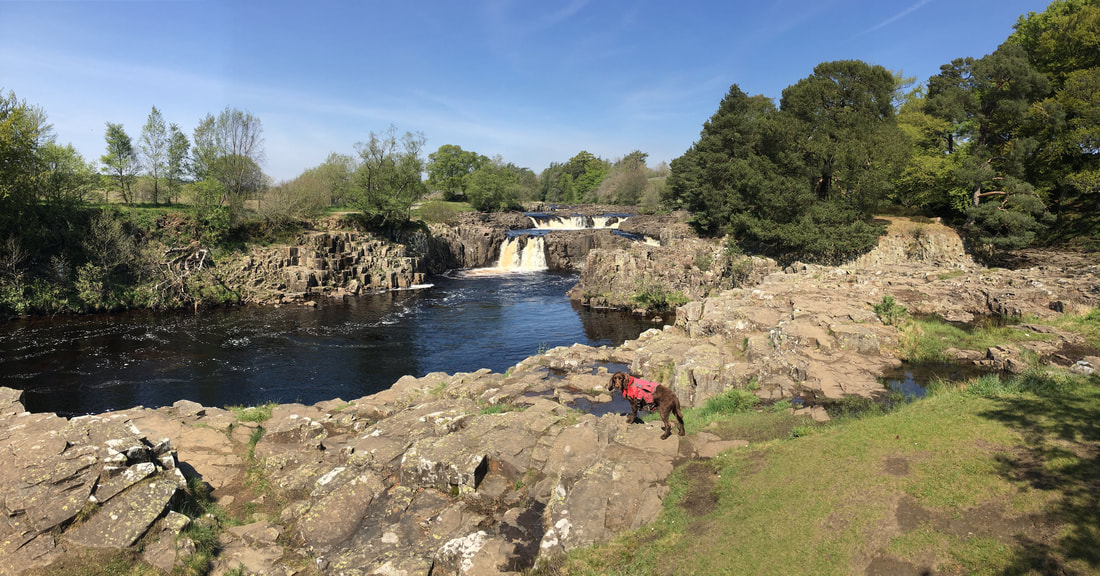 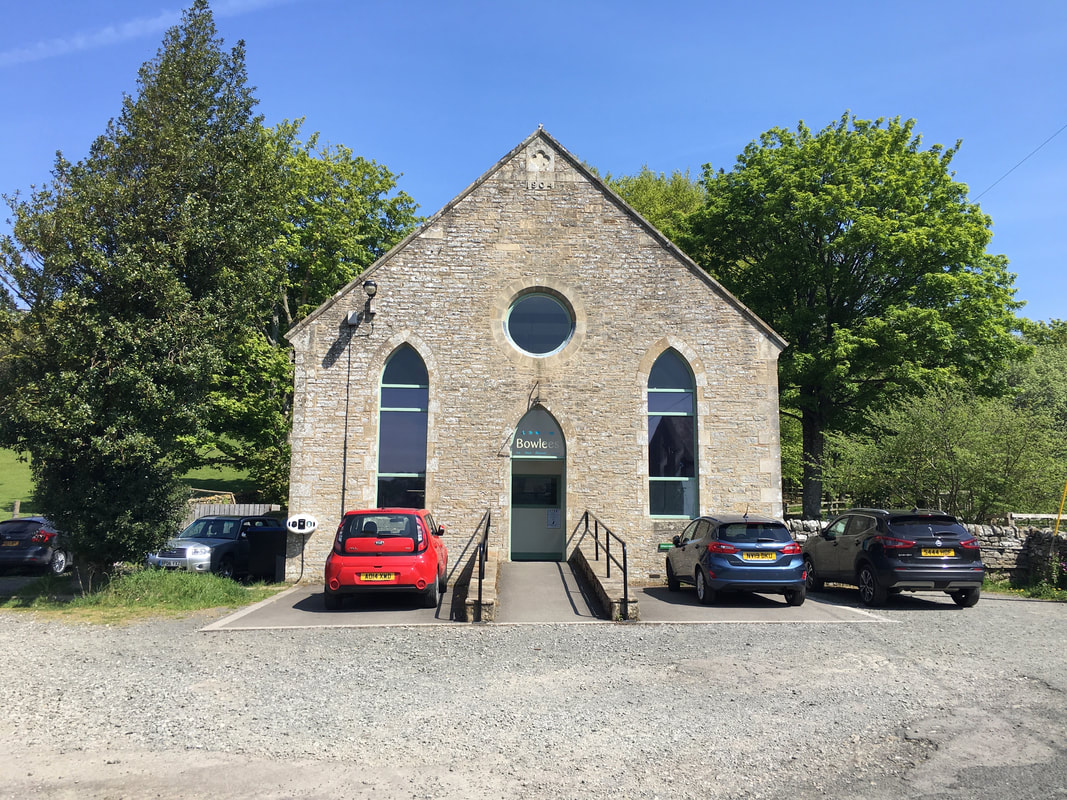 Bowlees Visitor's Centre - worth the short detour from the main path and serves great cake! 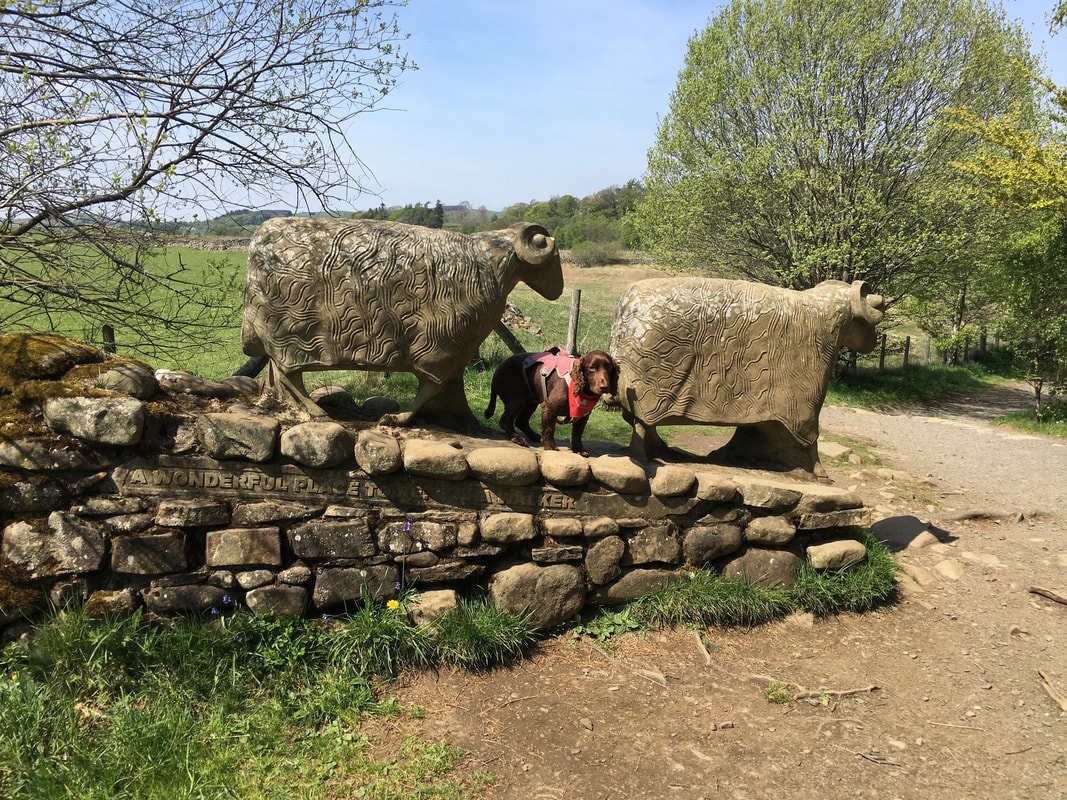 The Sheep Sculpture by Keith Alexander near Low Force 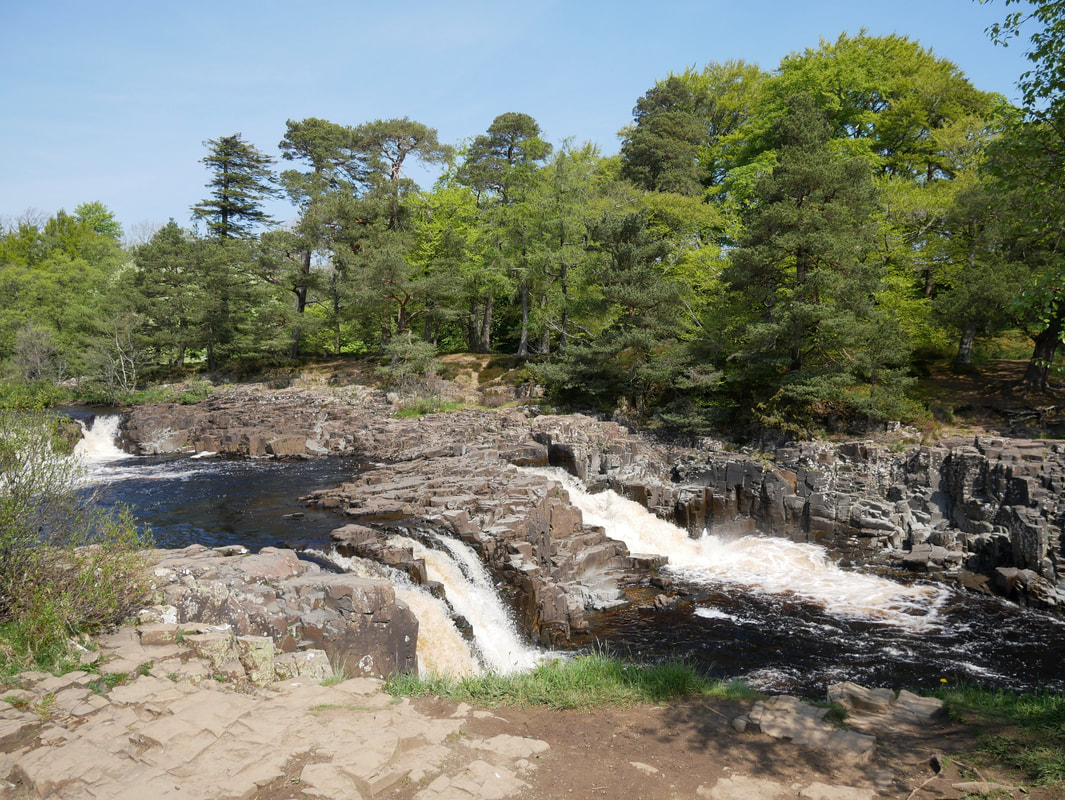 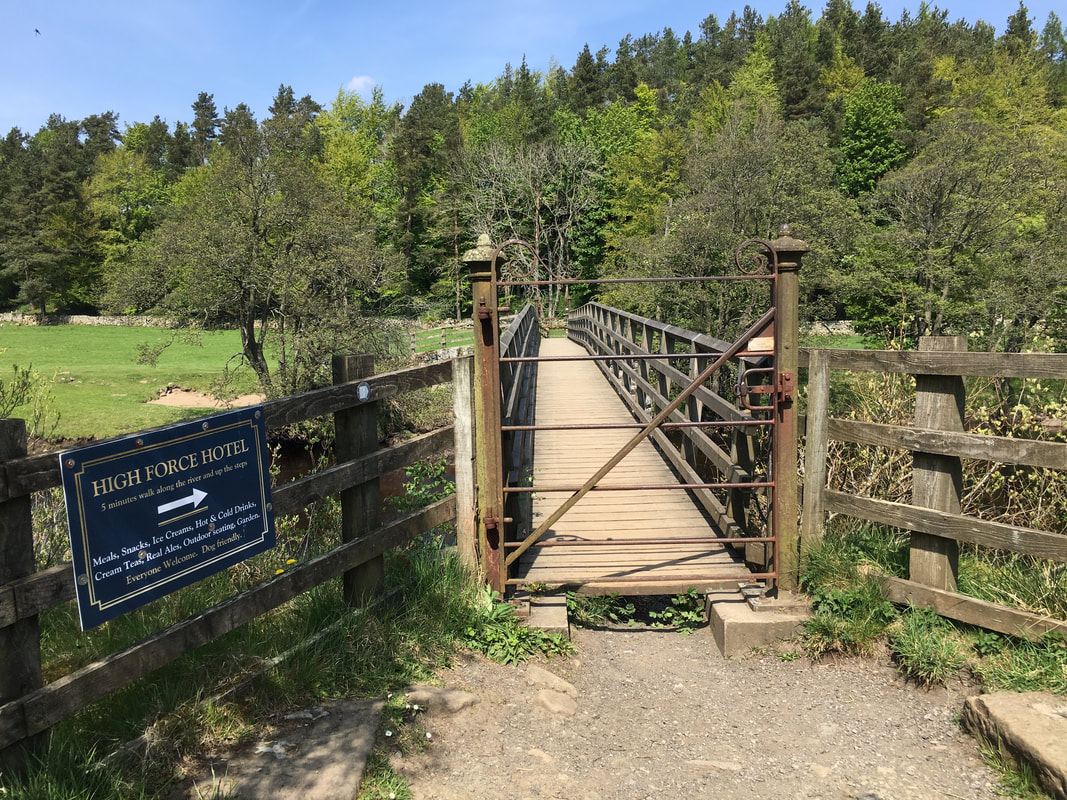 Another refreshment detour if one wishes - there is also a path near the Hotel that gives a great view of High Force however for those tight people amongst you it costs the vast sum of £1.50 (in 2019) to access the path. 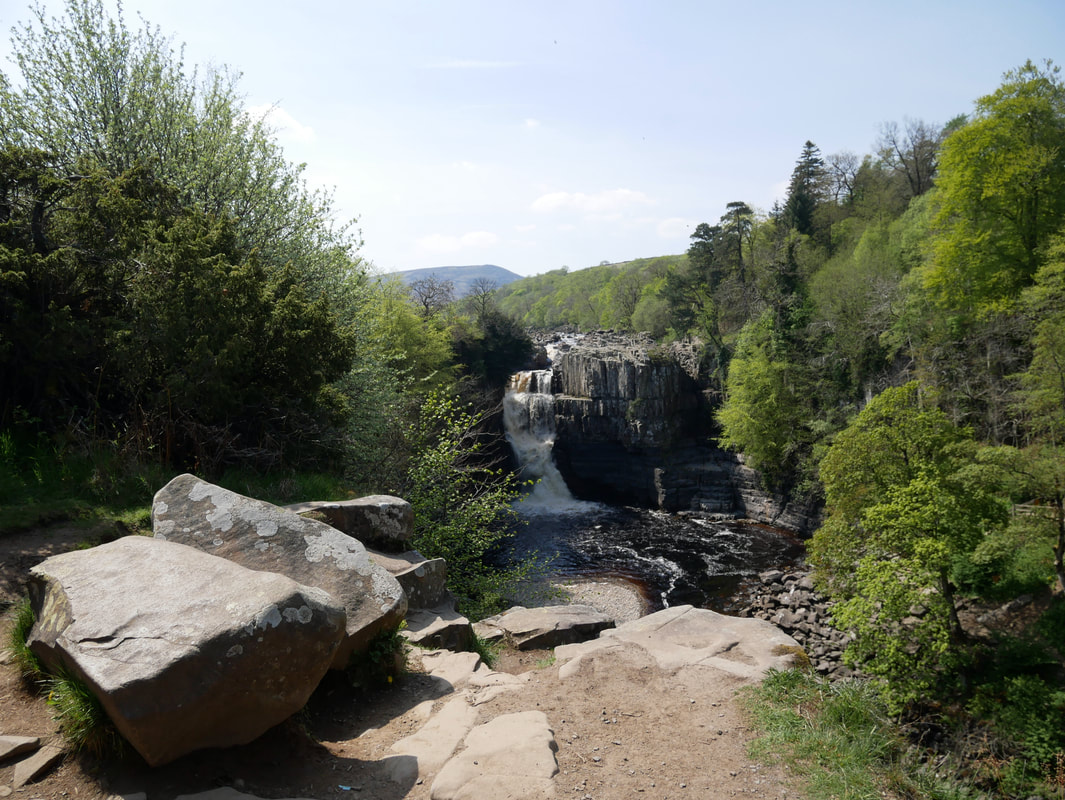 High Force - photos unfortunately do not do it justice 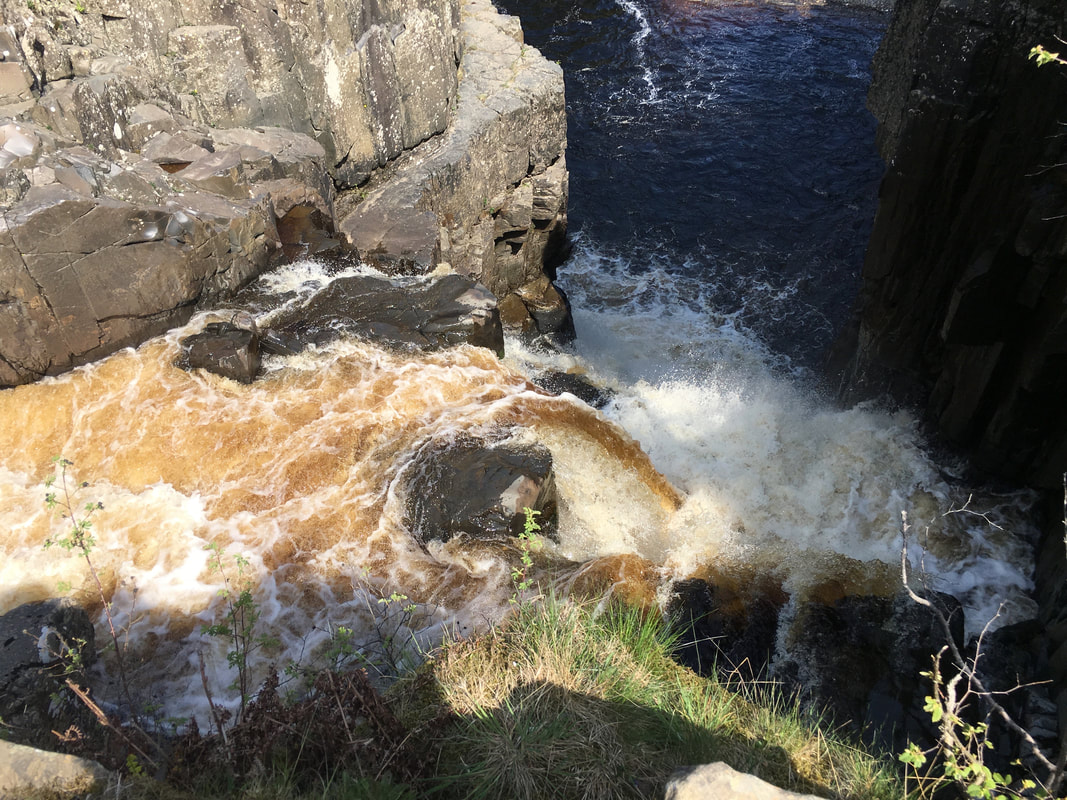 Above High Force - the power of water never ceases to amaze 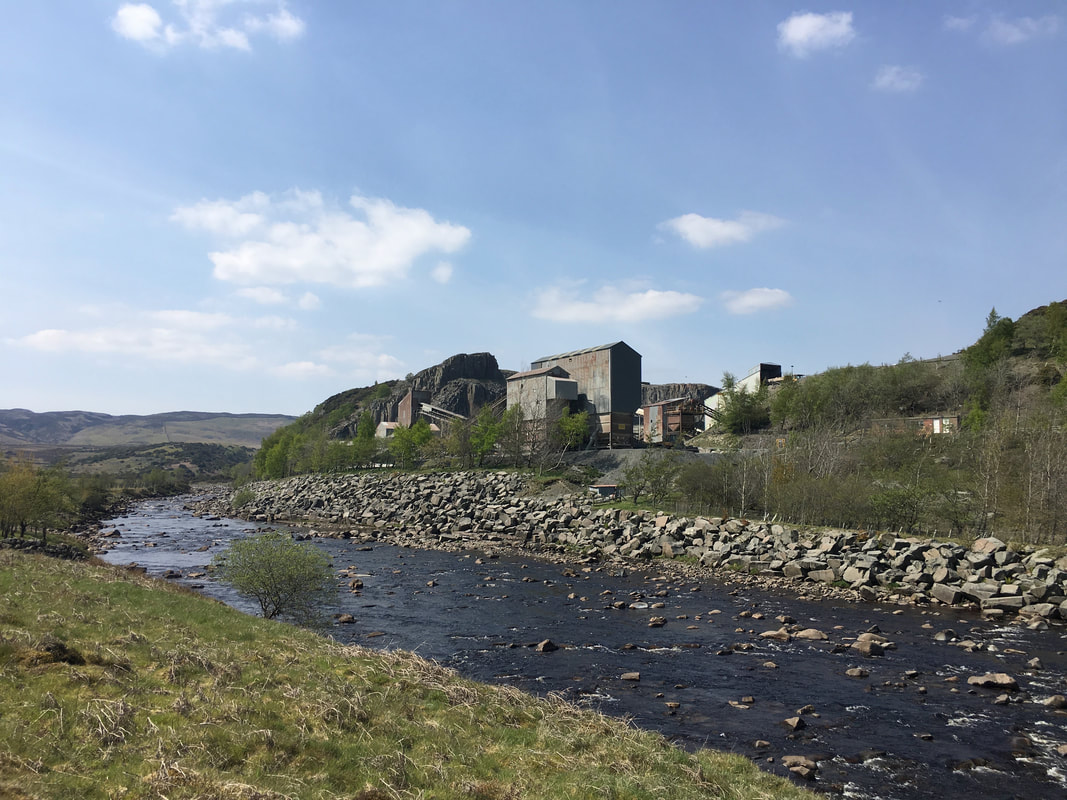 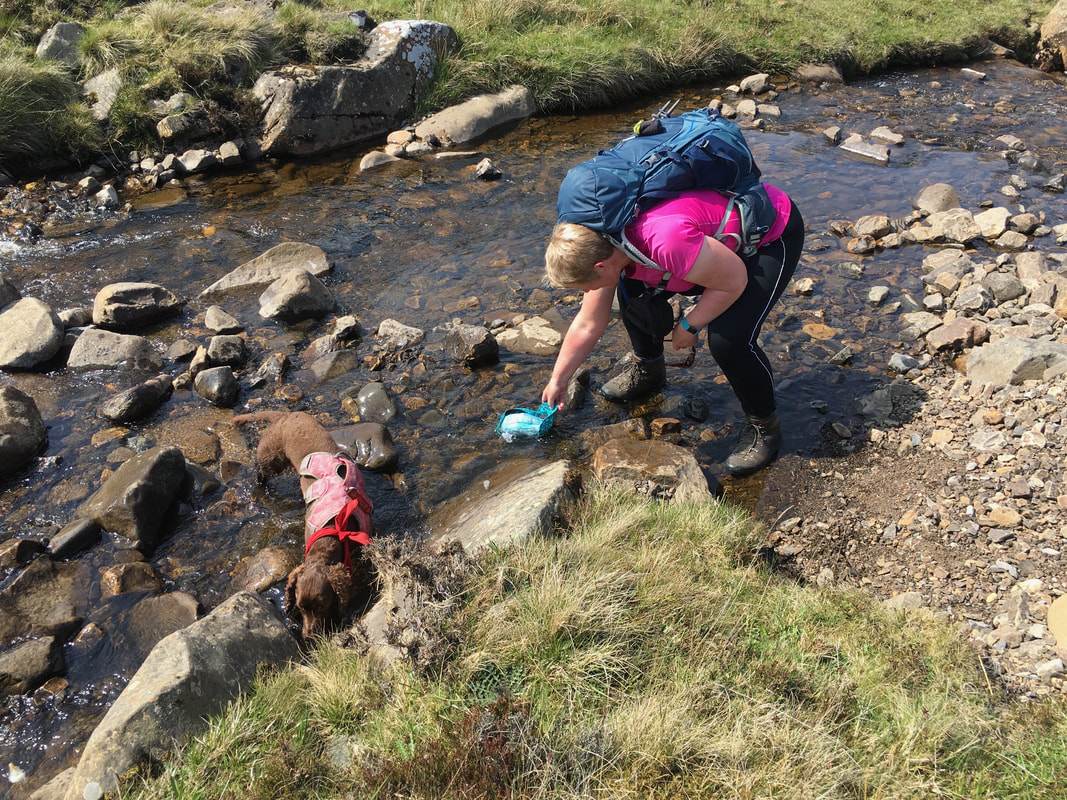 It was a pretty warm day today therefore every opportunity was taken for a "cap dip".
Sweep the cap through the water and plonk it straight on your head - instant relief. 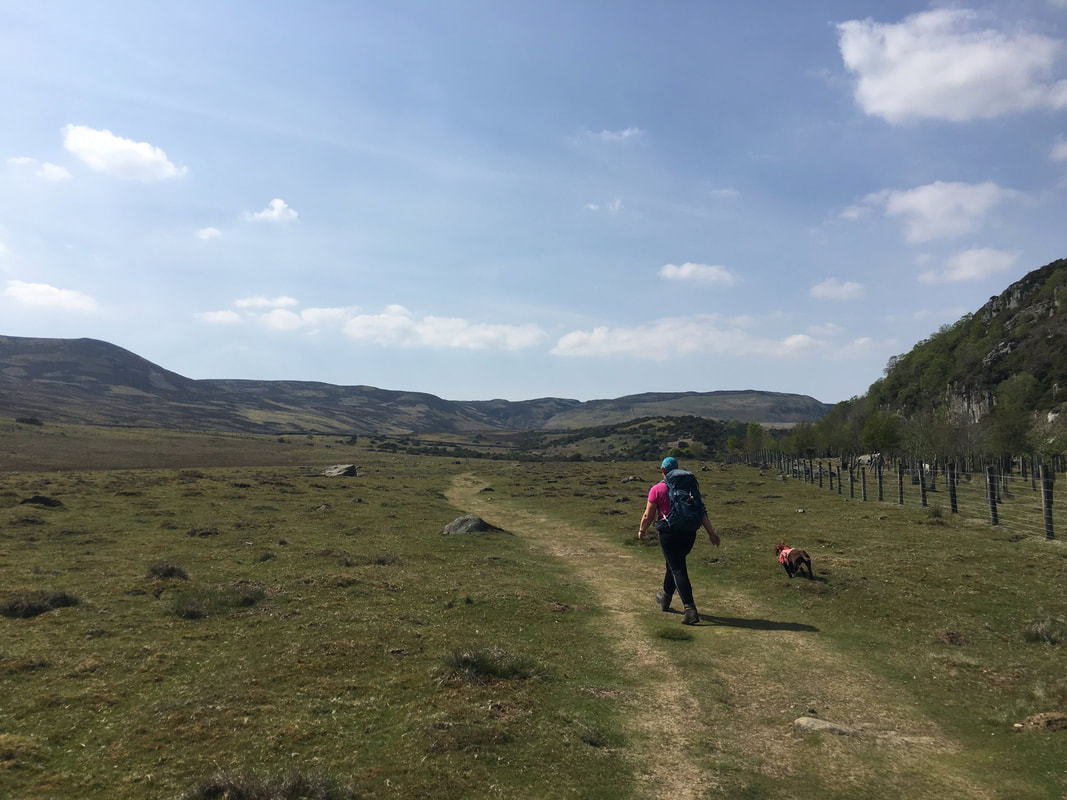 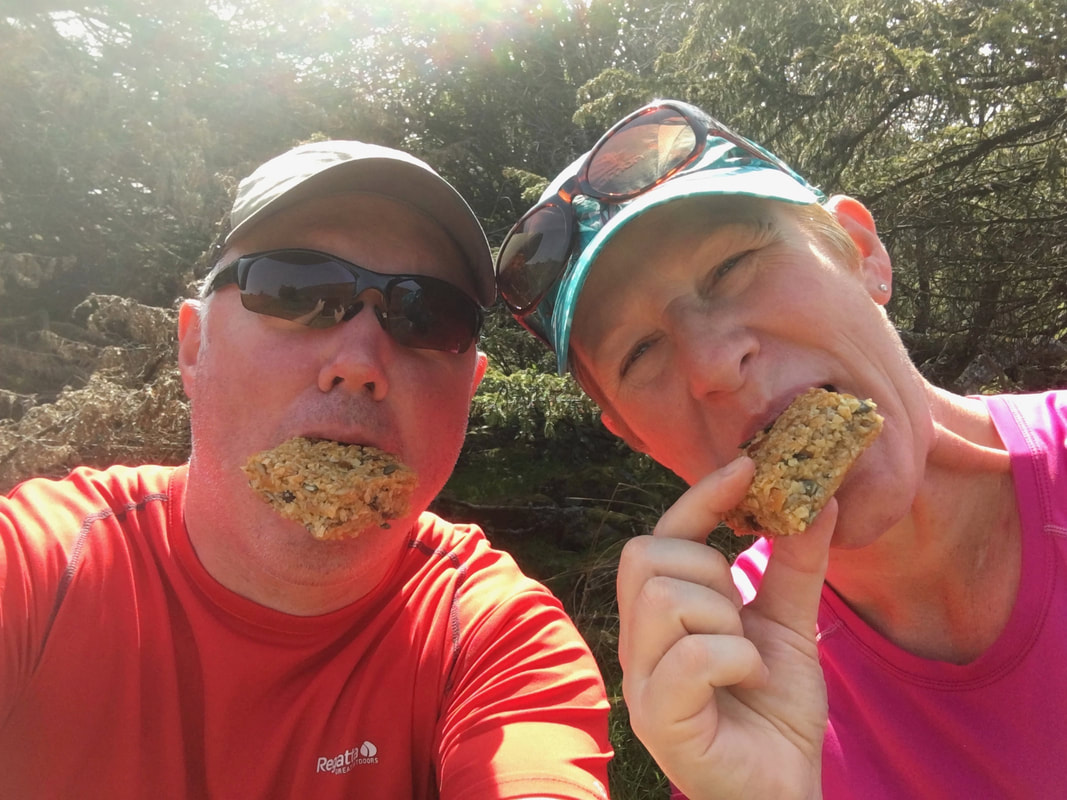 Thanks Gail - the flapjack was exceptional 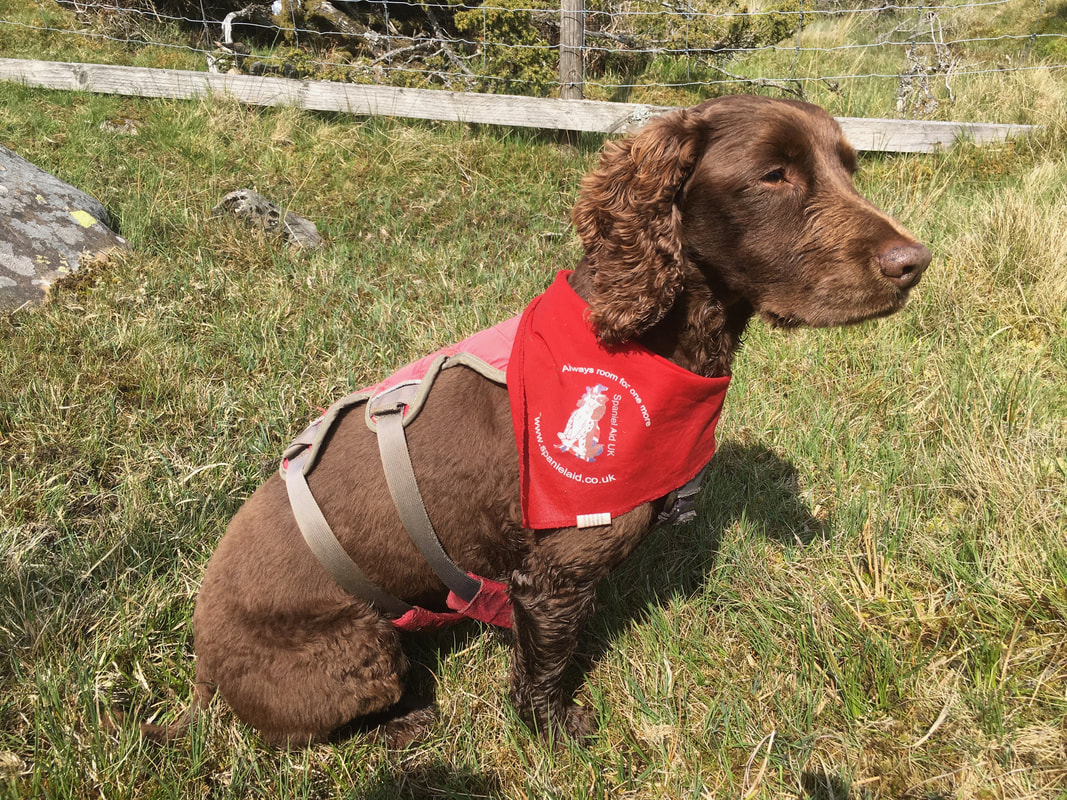 Fudge however did not agree - sulking because he cannot have any 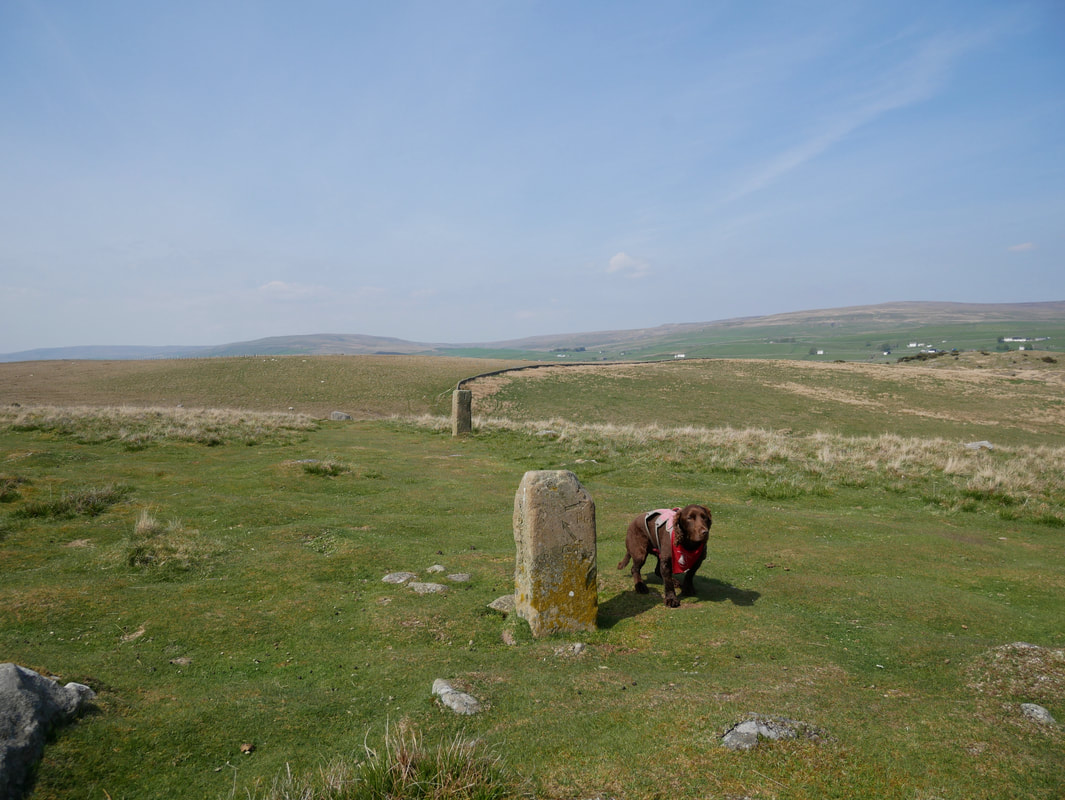 At the Pennine Way marker near Cronkley Farm 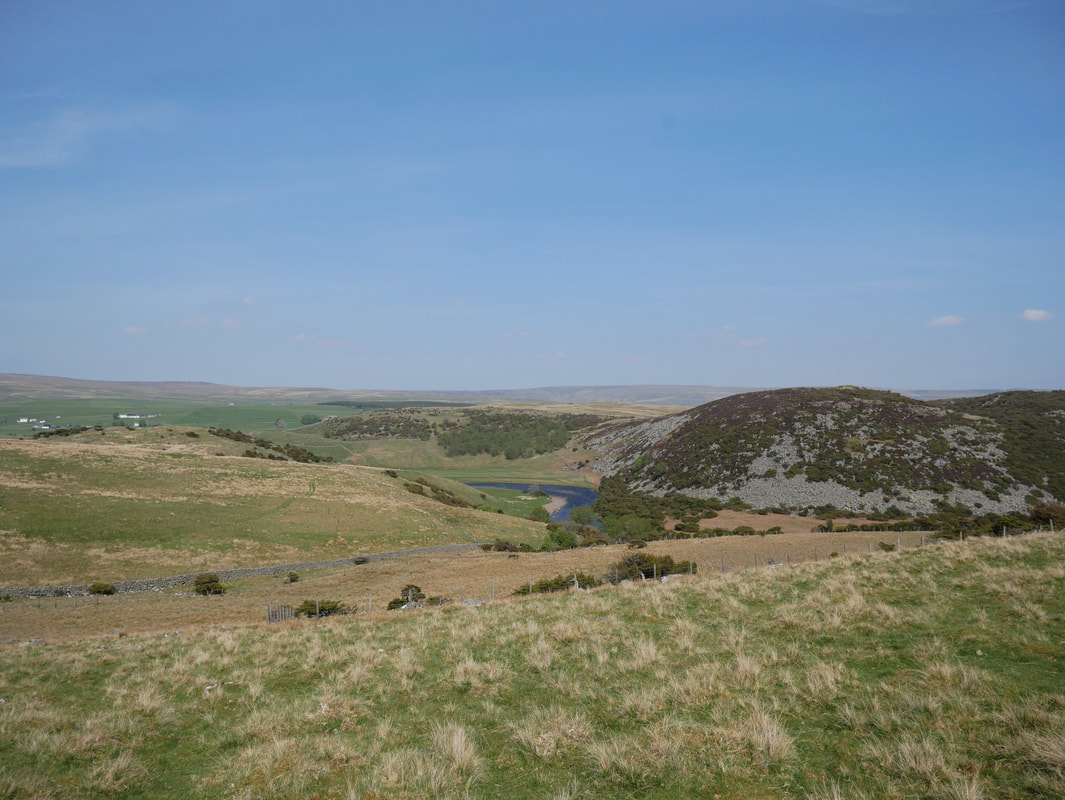 Dropping down to Cronkley Farm, the Tees comes back into view 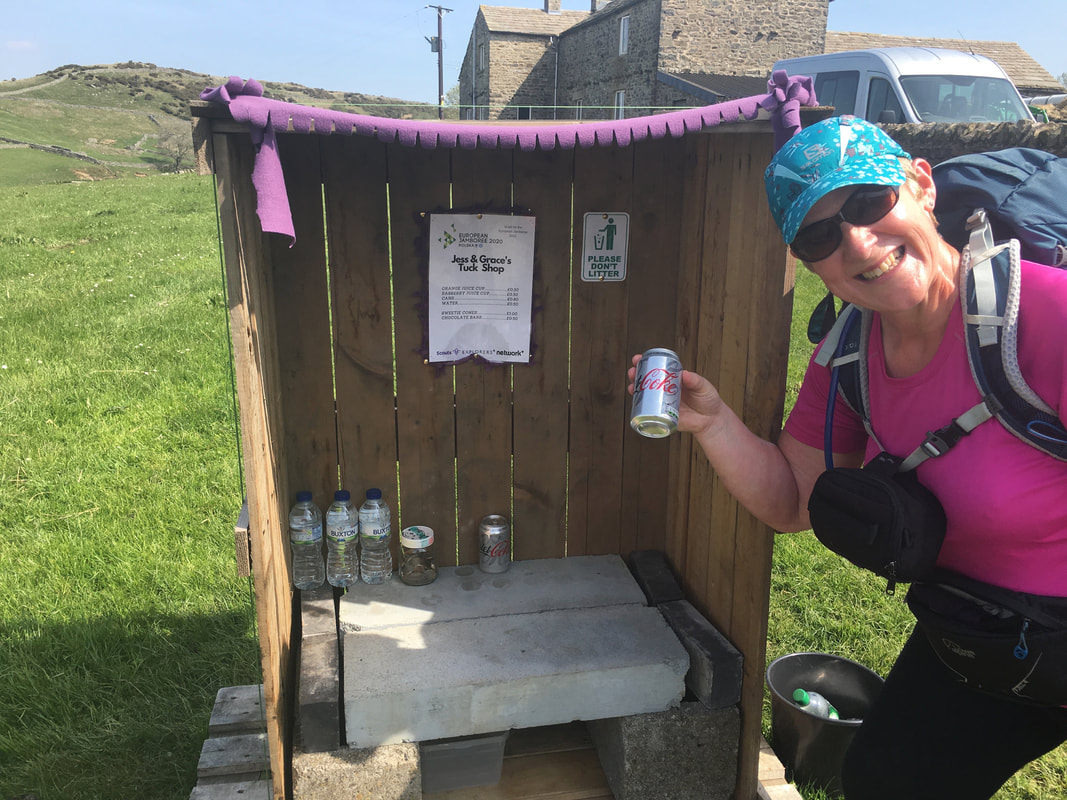 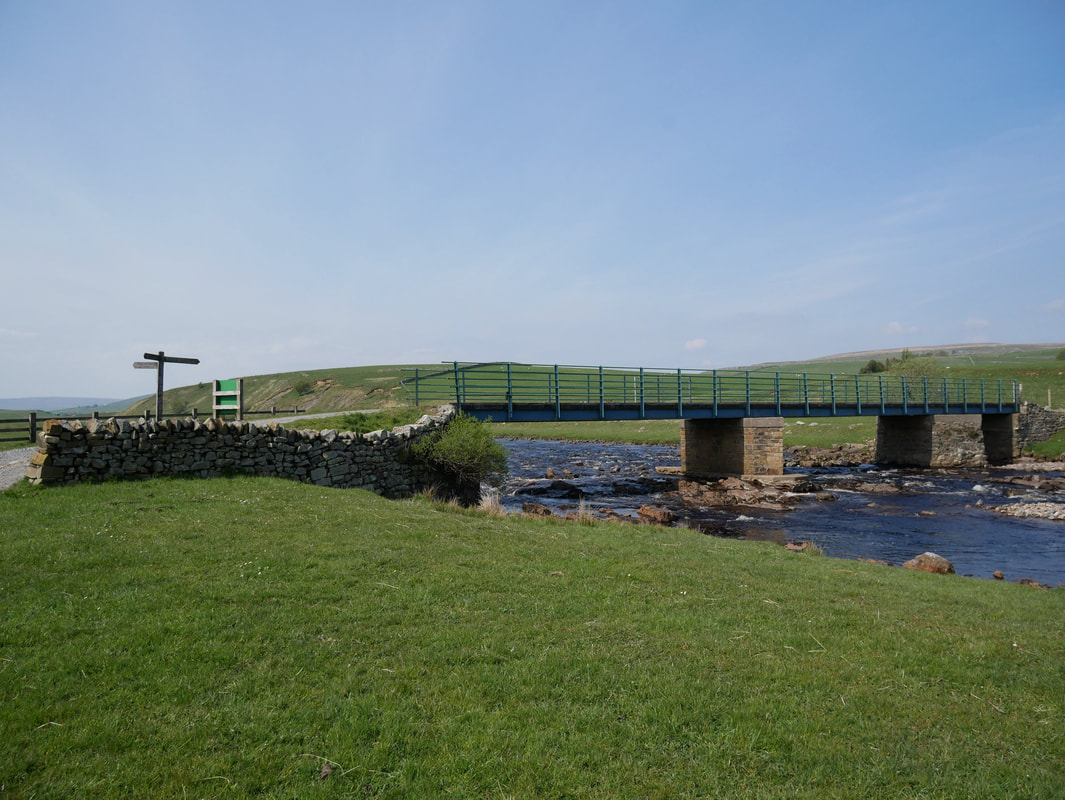 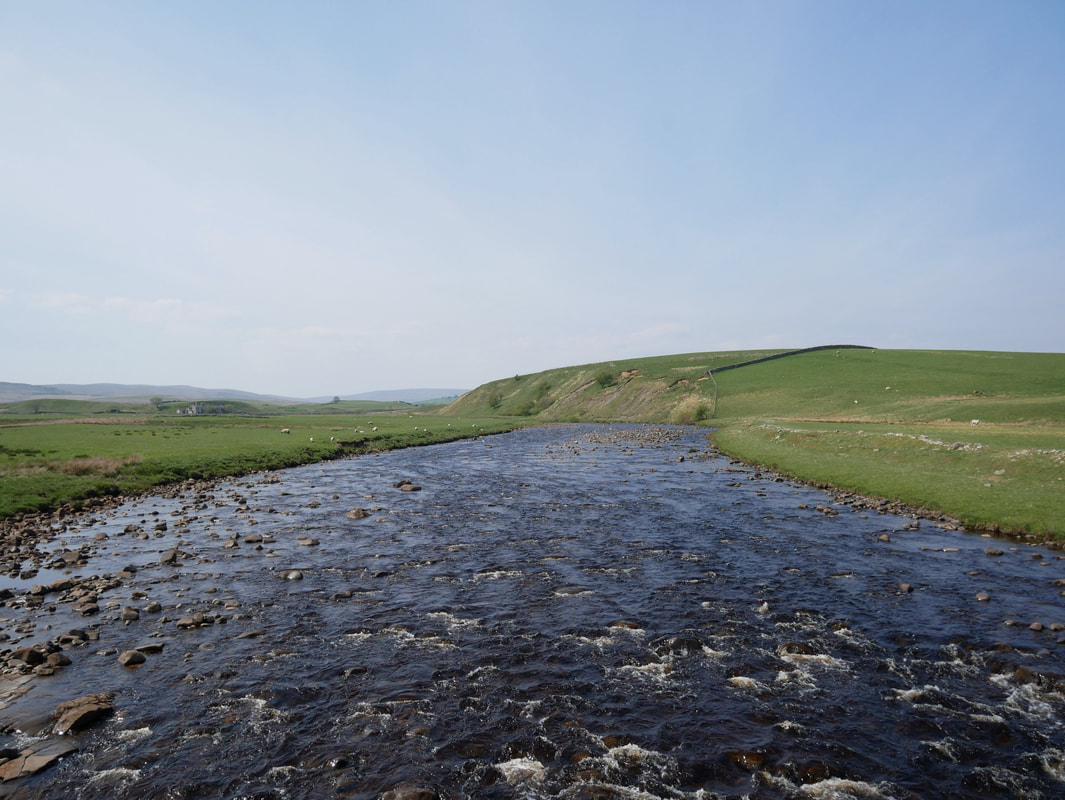 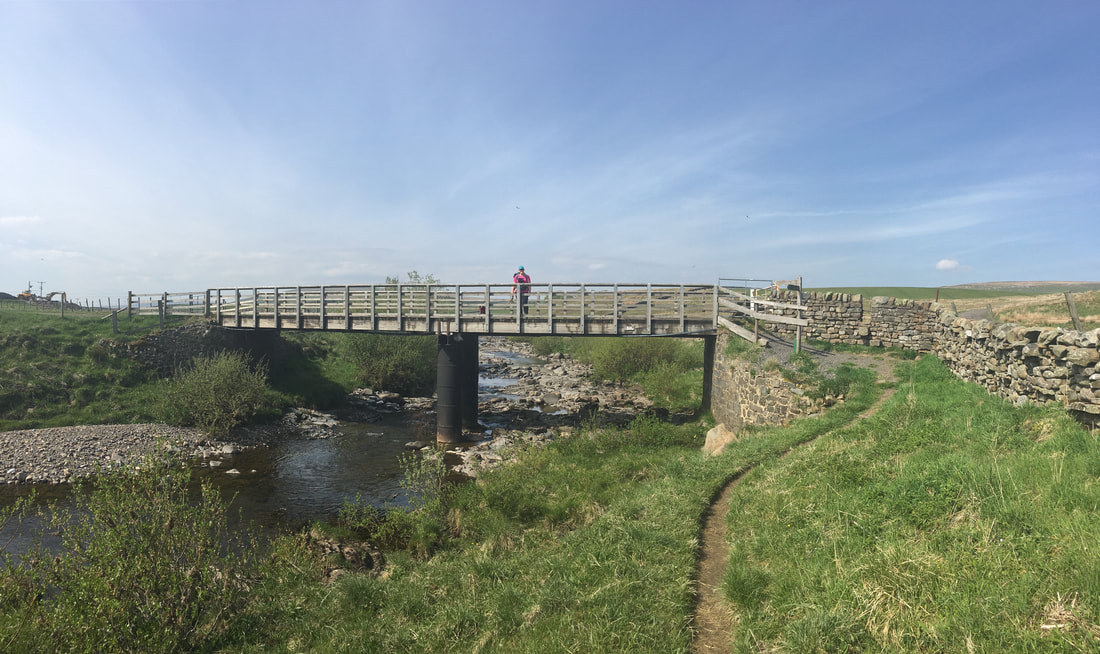 Saur Hill Bridge and our leaving of the Pennine Way.
It was great to spend 3 straight days on this classic route however we would meet up again soon enough. 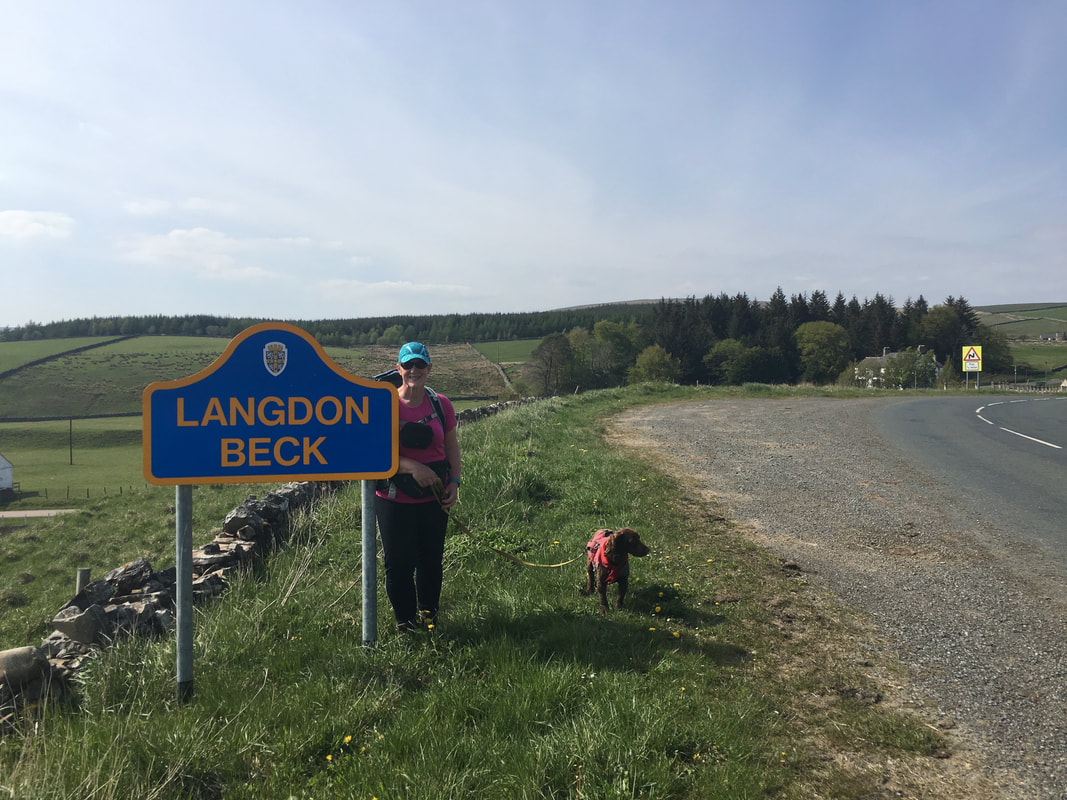 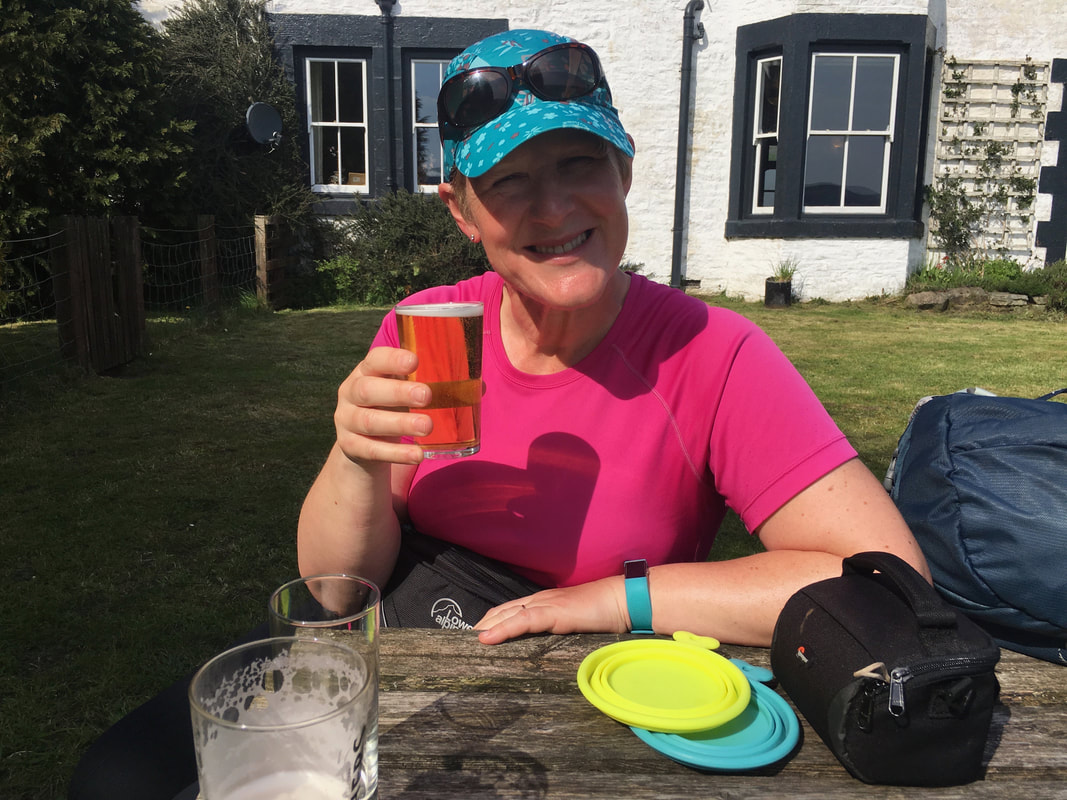 Checked in it was now time to enjoy the late evening sun - and Cider!
Overnight Accommodation 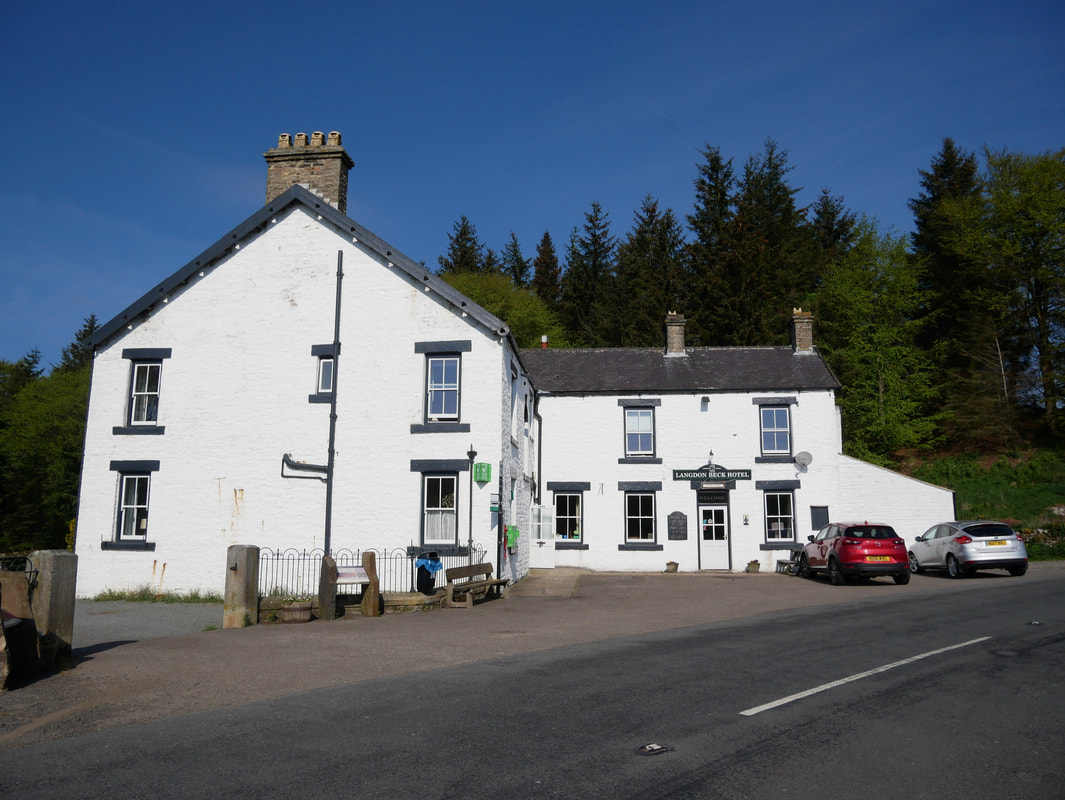