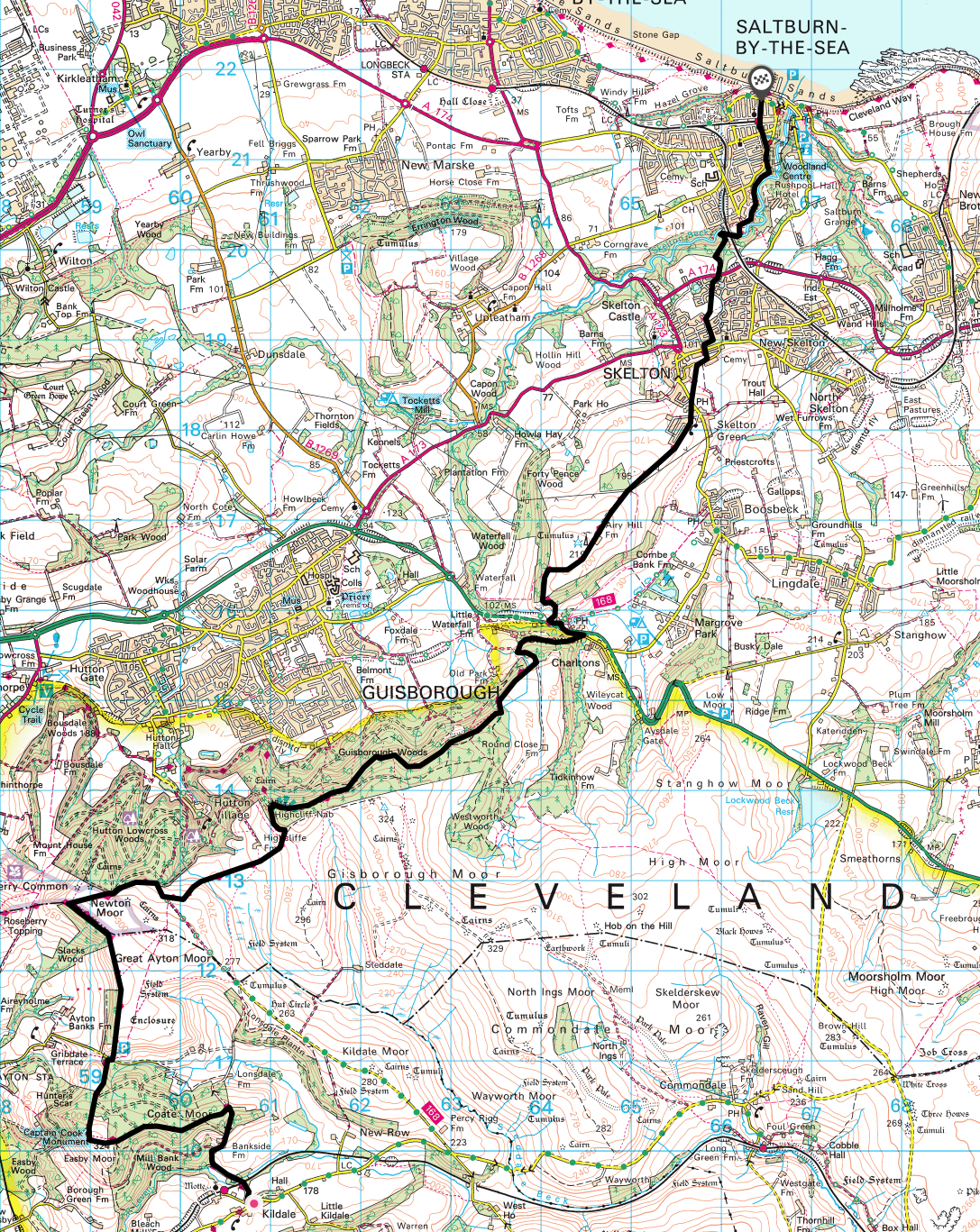 Glancing outside and also looking at the various weather forecasts it was looking like we were in for another overcast day today although the visibility was going to be much better thankfully. After a pleasant breakfast with our fellow guests we readied ourselves for the off - Mike & Bev drove us out to Kildale and we said our goodbyes - a very generous and lovely couple who were sadly leaving Park House in the Autumn. We wished them the very best of luck in their next chapter whatever that was going to be.

Kildale was quiet as we passed through heading for Captain Cook's Monument via the steep road leading to Coate Moor. At the monument we were fortunate to have it to ourselves just before a sponsored walk of about 50 passed us as were descending down to Gribdale Gate - looking back to their arrival they were swarming all over it like a tramp on chips. Reaching Gribdale Gate we were greeted by an extremely busy Car Park therefore knew that Roseberry Topping would be busy. However we had already decided that at just under 15 miles we had a long enough day today therefore gave it a miss - we had already visited the summit on several occasions anyway. From the myriad of signs at the Roseberry Topping turn off we headed over a delightful section of moorland to reach Highcliffe Farm just below the Nab of the same name.

​After lunch we enjoyed the superb view from Highcliffe Nab to then continue on another delightful section both above and through Guisborough Woods to eventually pop out on the A171 at Slapewath. Crossing the busy road we just so happened to fall into The Fox & Hound and as it was open and keen to support the local economy we stopped for a nice refreshing beverage. We paid for this stop though - a beast of a climb out of Slapewath followed in order to crest Airy Hill. From the summit the route descended into Skelton and made its way through various residential areas to finally reach Saltburn via the lovely town gardens. After a cool drink in The Marine on the seafront we took the opportunity to do a bit of shopping before catching our bus to Runswick Bay where we would be staying for the next 4 nights.

​After a welcome shower and a quick beer we enjoyed a carpet picnic before turning in. Today was a long day and we were looking forward to our rest day tomorrow.​ 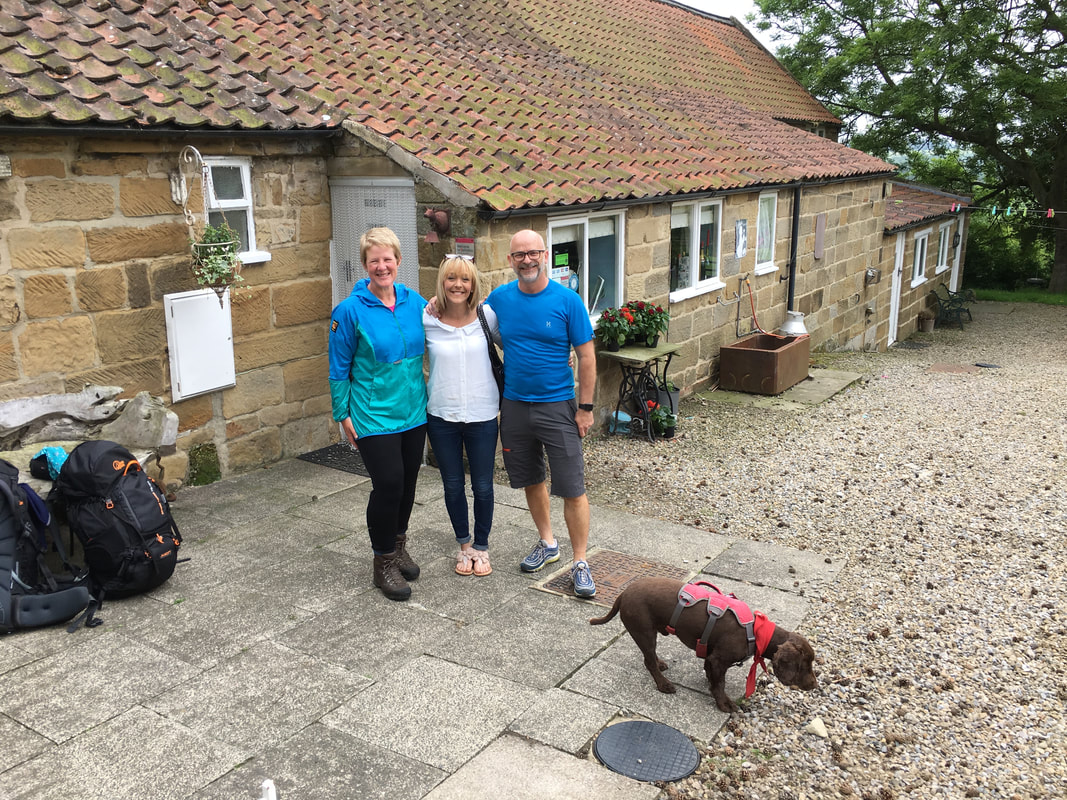 With Bev & Mike at Park House - sad to think they are no longer there anymore.  Fantastic hosts - we will miss them.
​Not one for goodbyes, Fudge takes to sniffing for Chicken shit which was in plentiful supply around the courtyard. 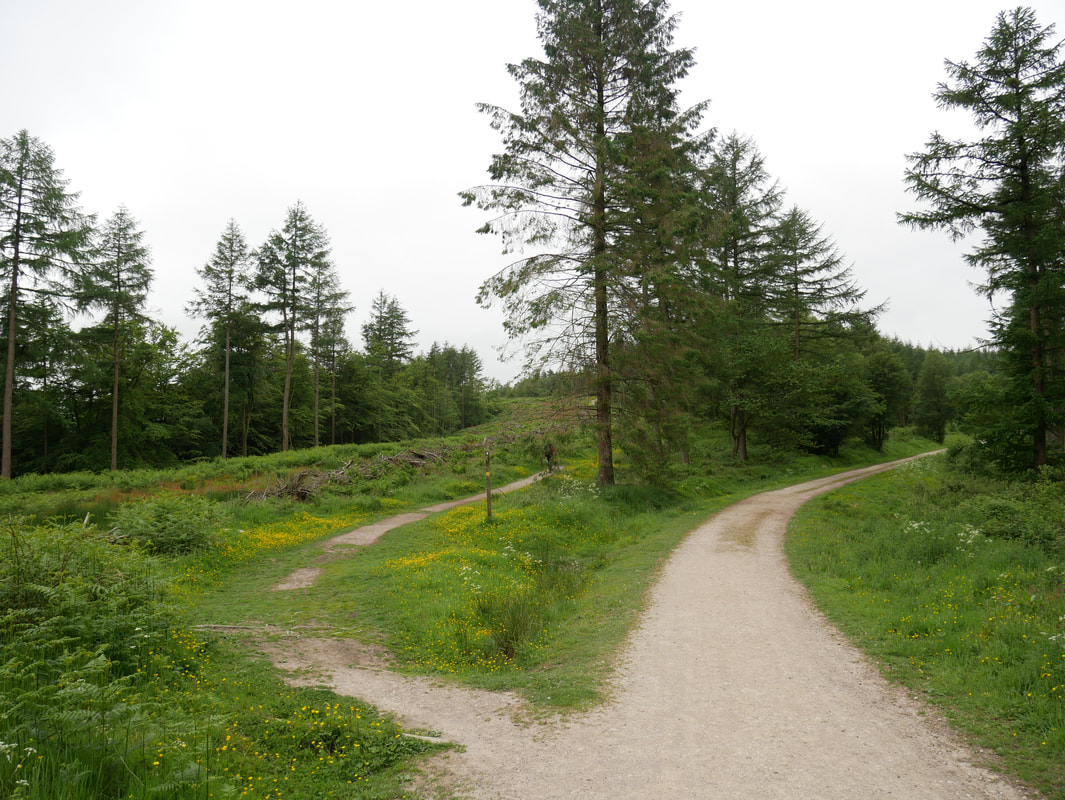 Shortly before the Monument, the track splits - we were off to the left. 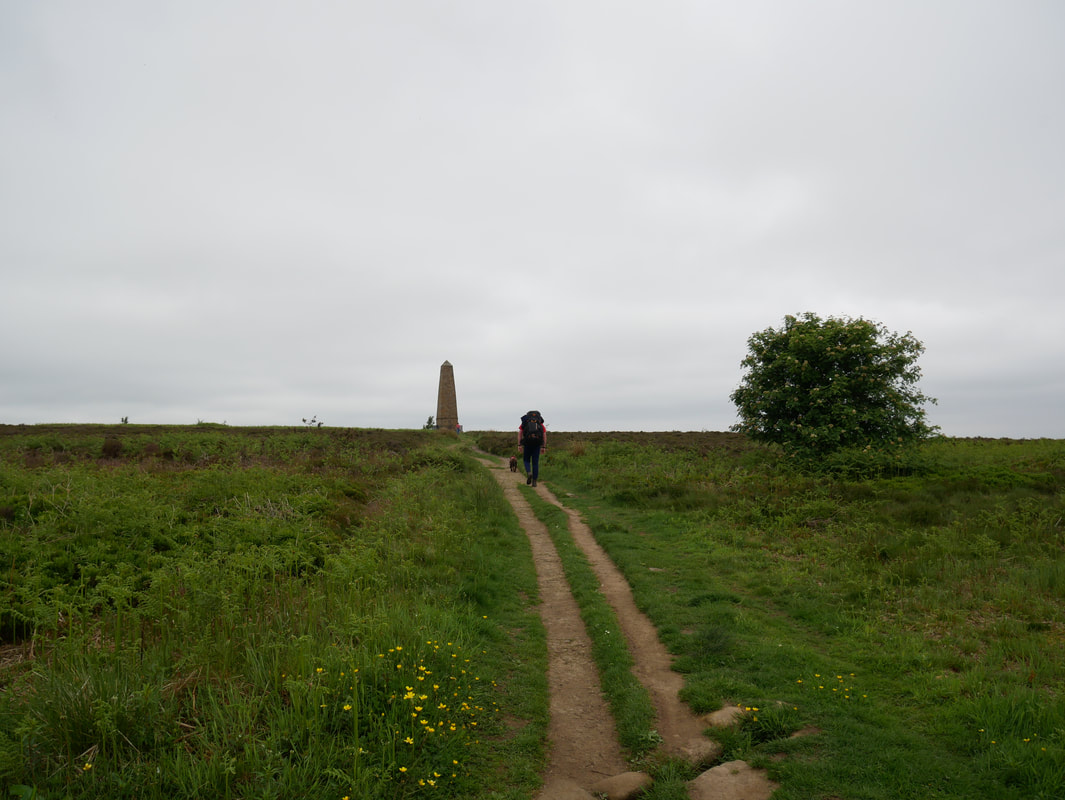 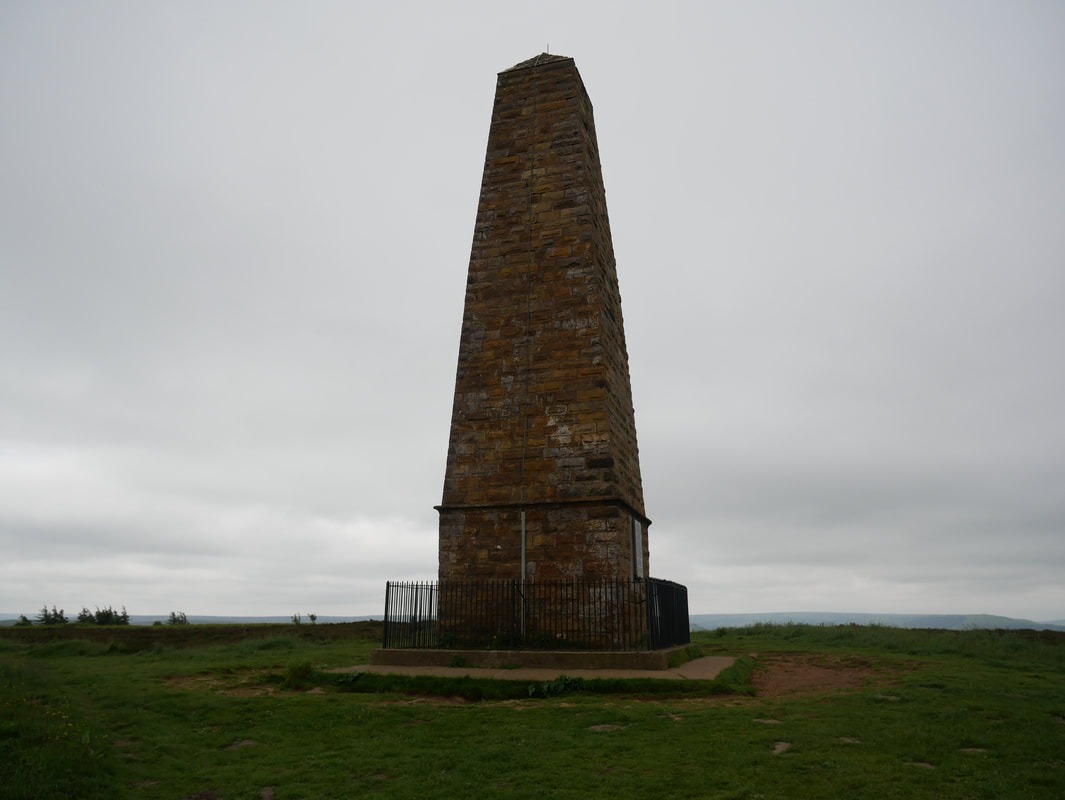 A gloomy sky above Captain Cook's Monument
​The monument was erected in 1827 by Robert Campion, a Whitby Banker.  A plaque on the monument reads:

In memory of the celebrated circumnavigator Captain James Cook F.R.S.  A man of nautical knowledge inferior to none, in zeal, prudence and energy, superior to most.  Regardless of danger he opened an intercourse with the Friendly Isles and other parts of the Southern Hemisphere. He was born at Marton Oct. 27th 1728 and massacred at Owythee Feb. 14th 1779 to the inexpressible grief of his countrymen.  While the art of navigation shall be cultivated among men, whilst the spirit of enterprise, commerce and philanthropy shall animate the sons of Britain, while it shall be deemed the honour of a Christian Nation to spread civilisation and the blessings of the Christian faith among pagan and savage tribes, so long will the name of Captain Cook stand out amongst the most celebrated and most admired benefactors of the human race. 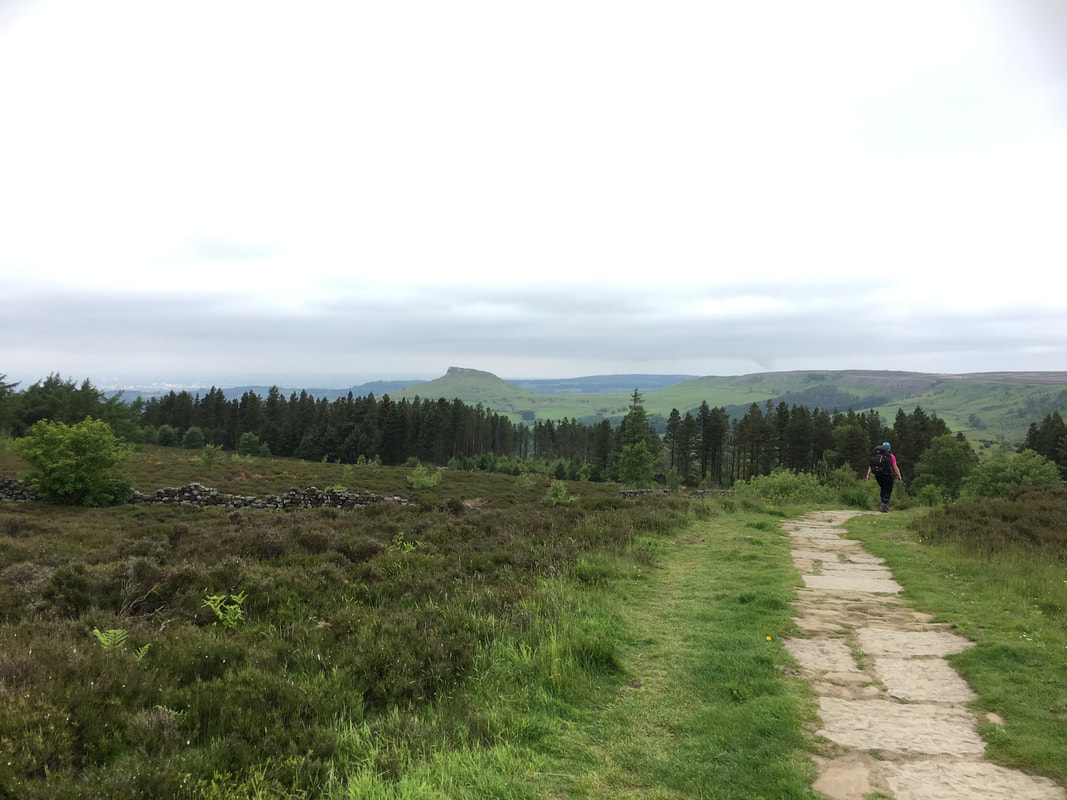 Dropping down to Gribdale Gate with Roseberry Topping ahead 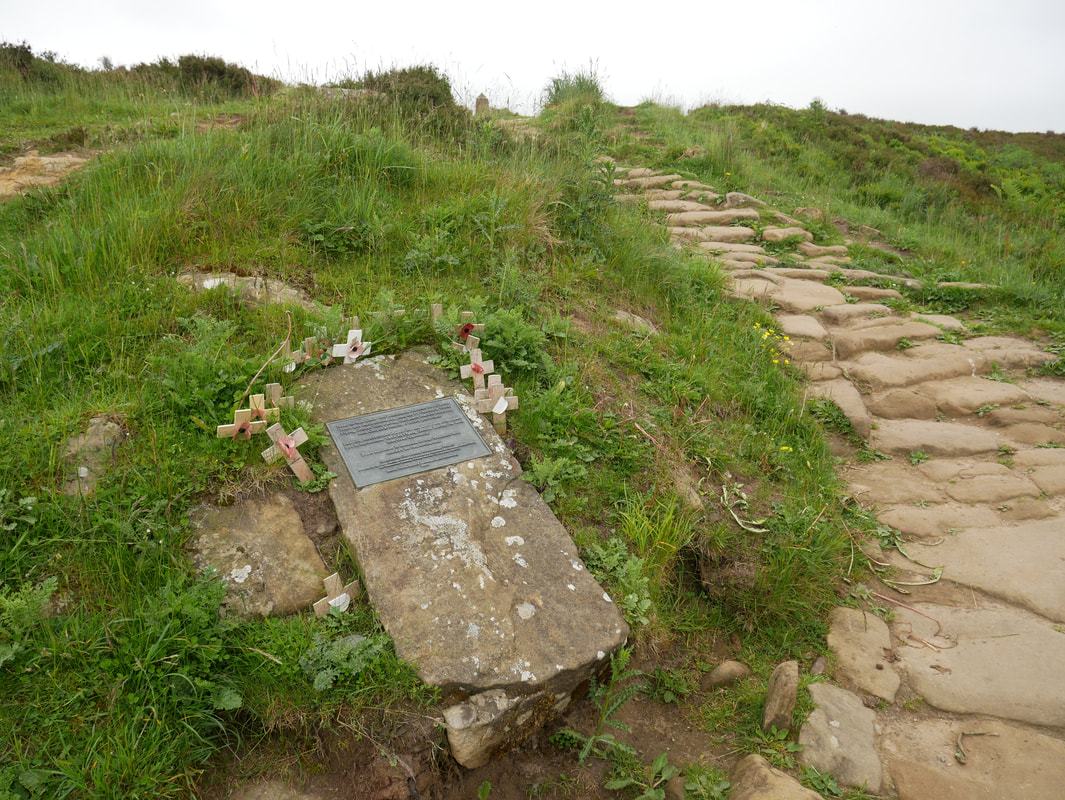 The memorial near Captain Cook's Monument to the RAF Lockheed Hudson aircraft from Thornaby Aerodrome that crashed near this spot on 11 February 1940.  Three of the crew perished however Leading Aircraftsman Barker survived but unfortunately later on in the war and now as a Flying Officer, he was lost over Germany in 1943 - once again they shall never be forgotten 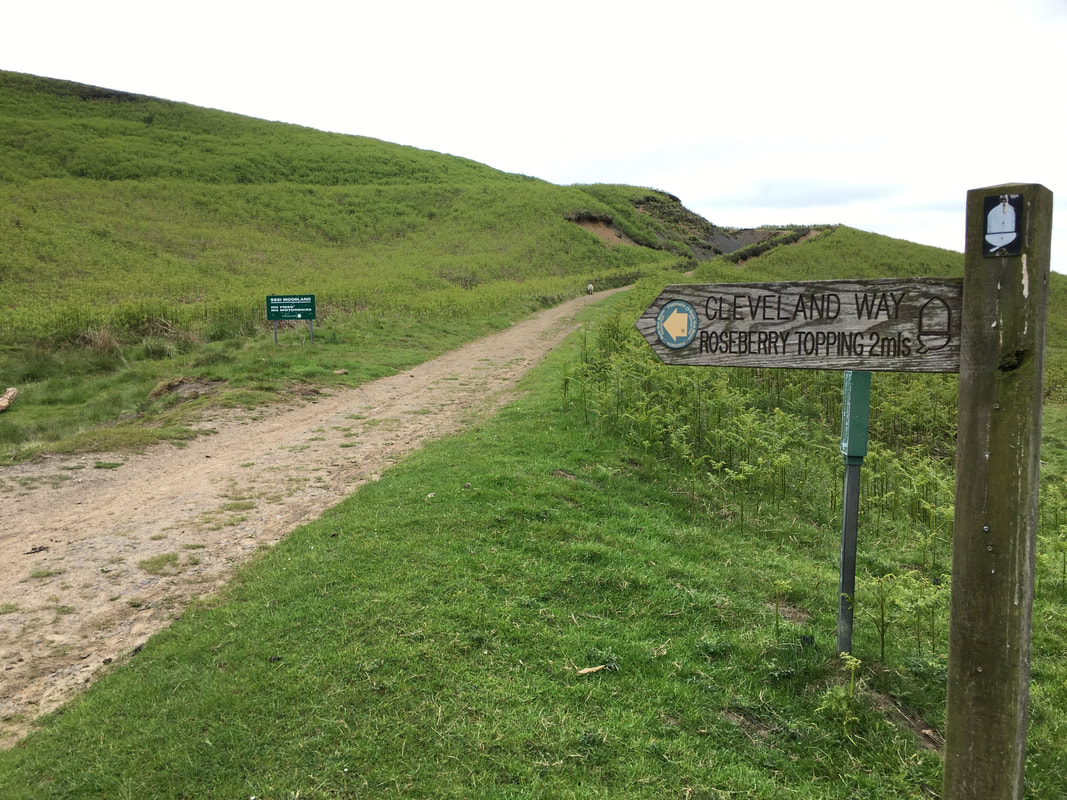 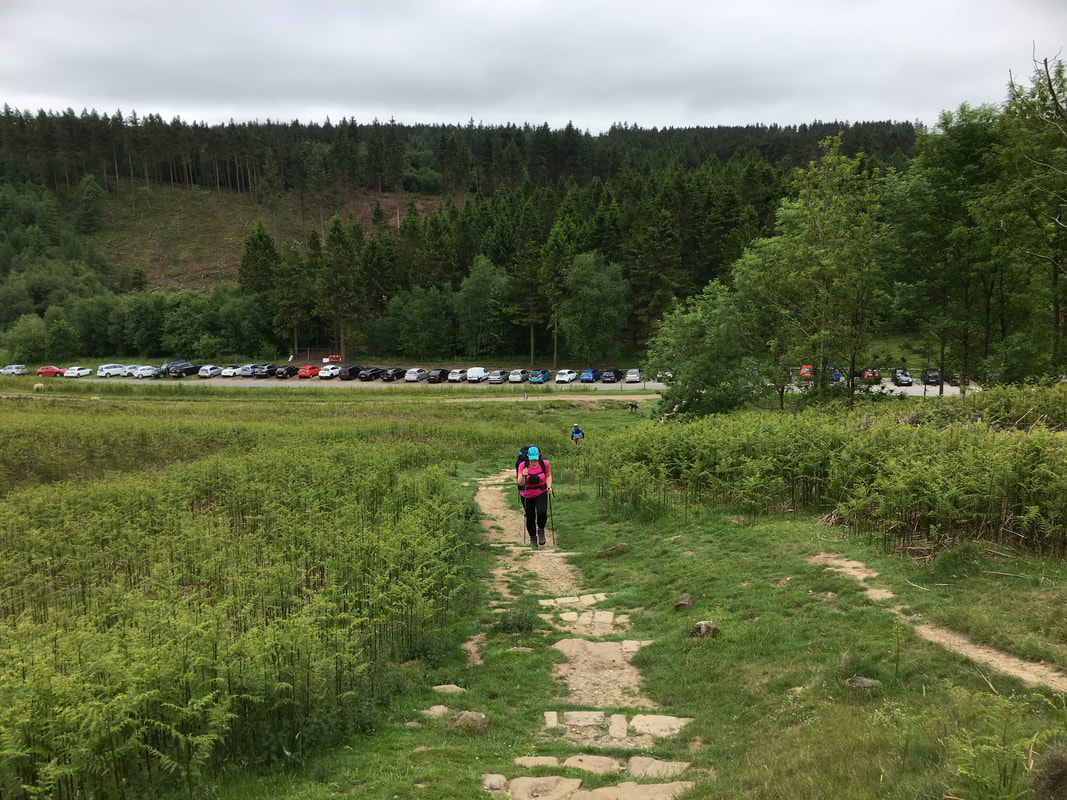 It was going to be a bit busy up on Roseberry Topping judging by all those cars parked up at Gribdale Gate. 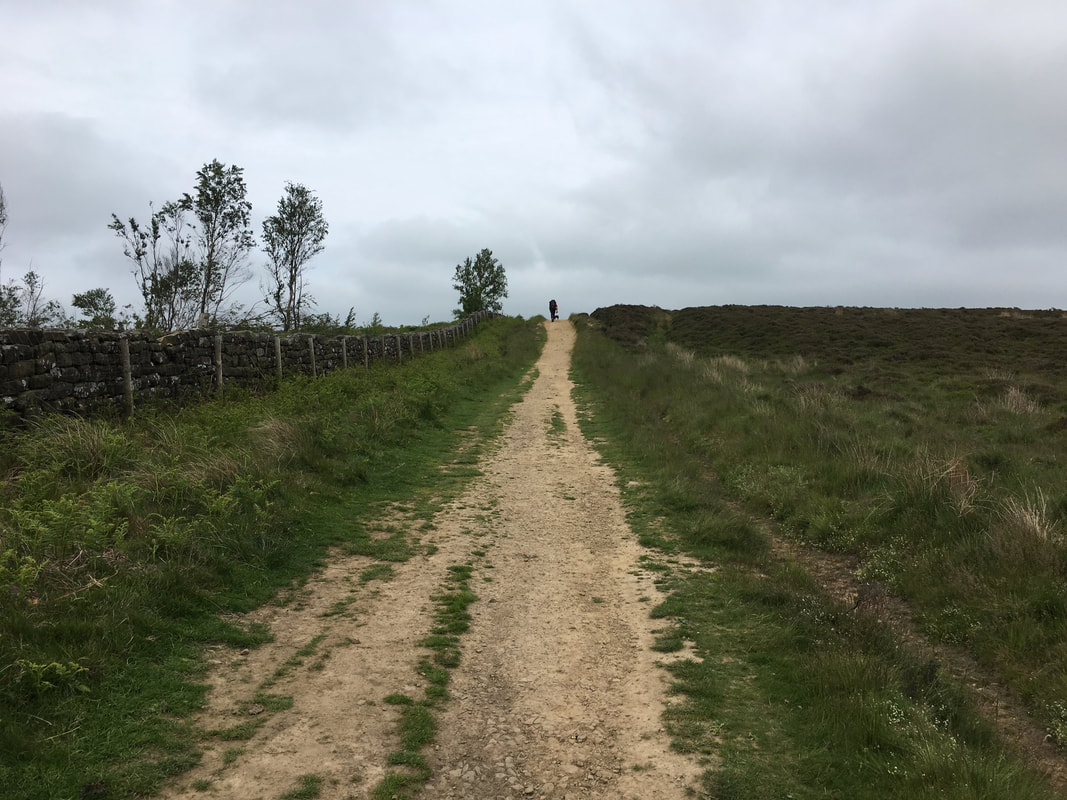 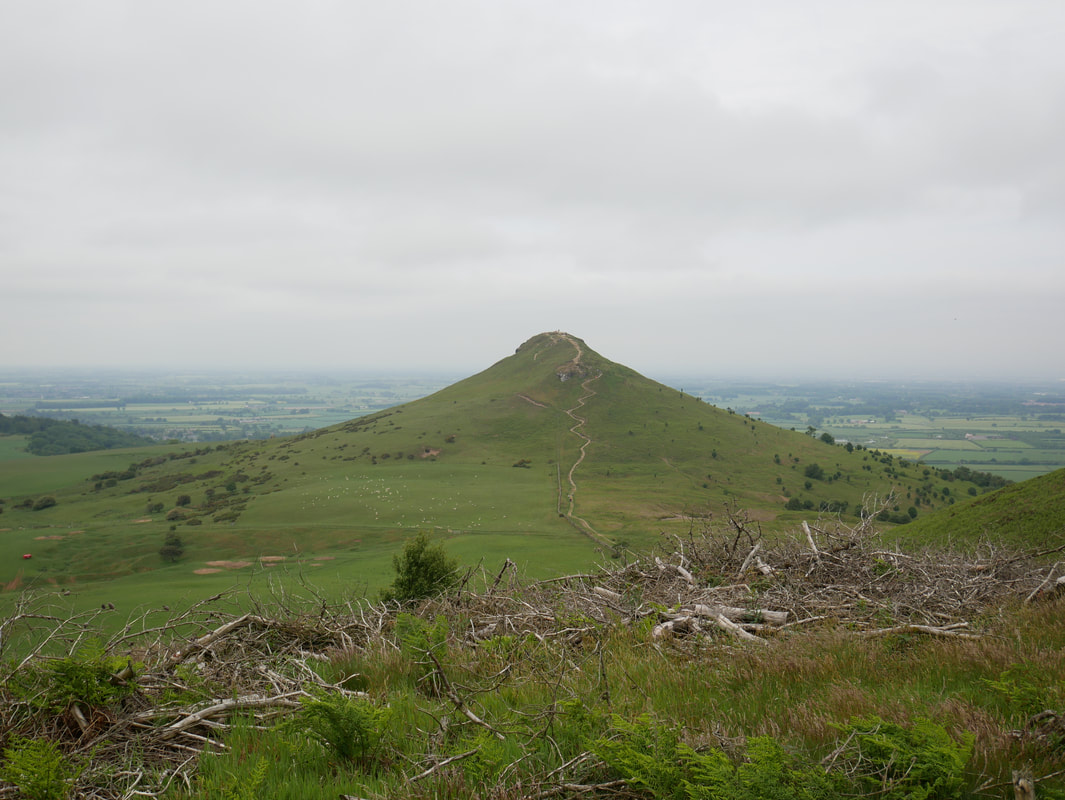 Roseberry Topping - it looked a bit busy over there and as we had been up there several times we gave it a miss today. 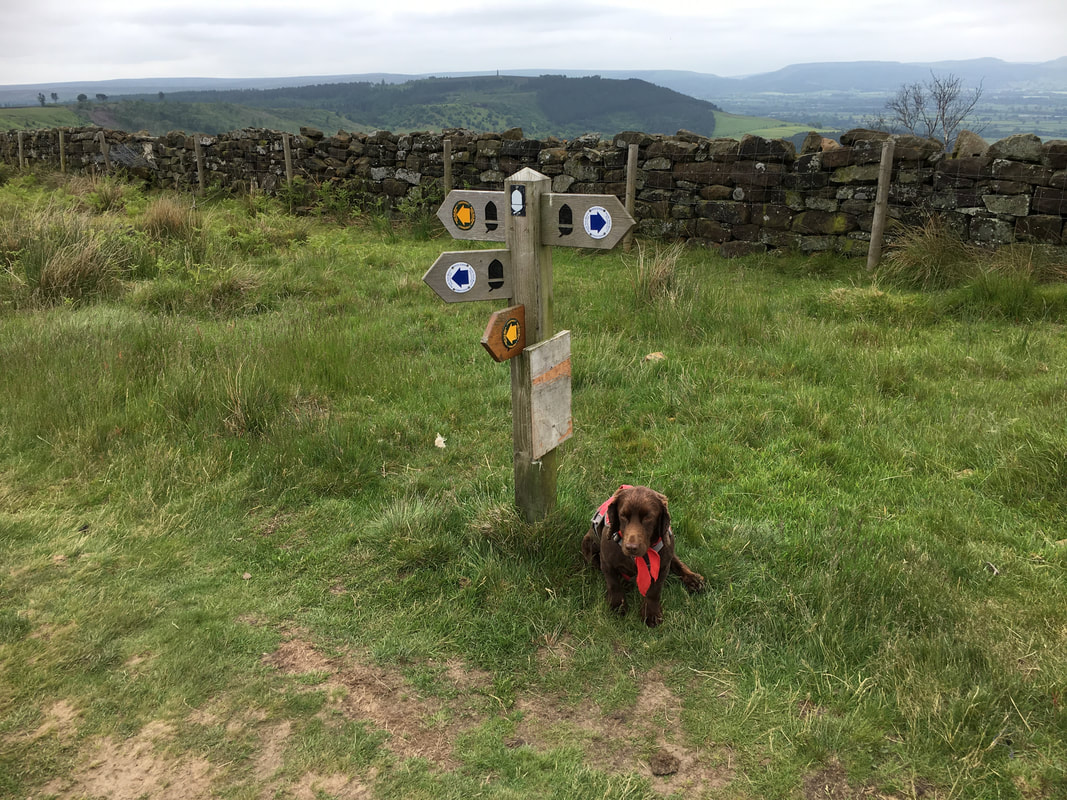 Fudge shows his despair at the myriad of signs at the Roseberry Topping turning.  We were following the middle sign on the left. 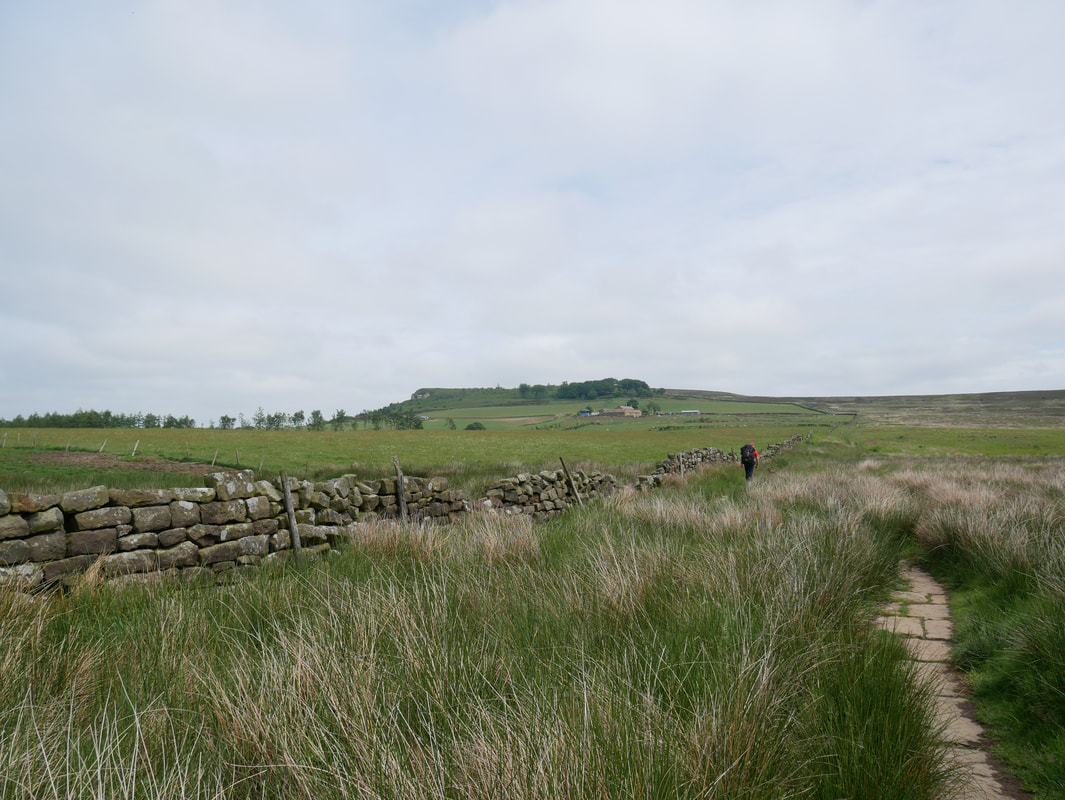 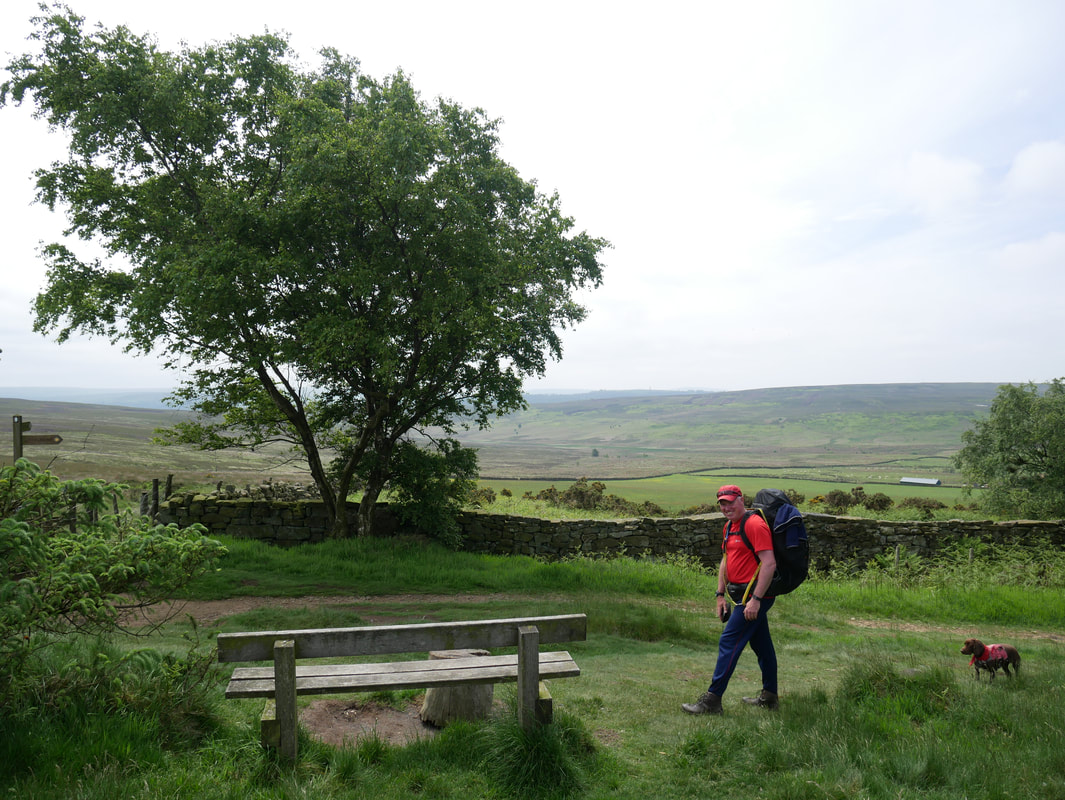 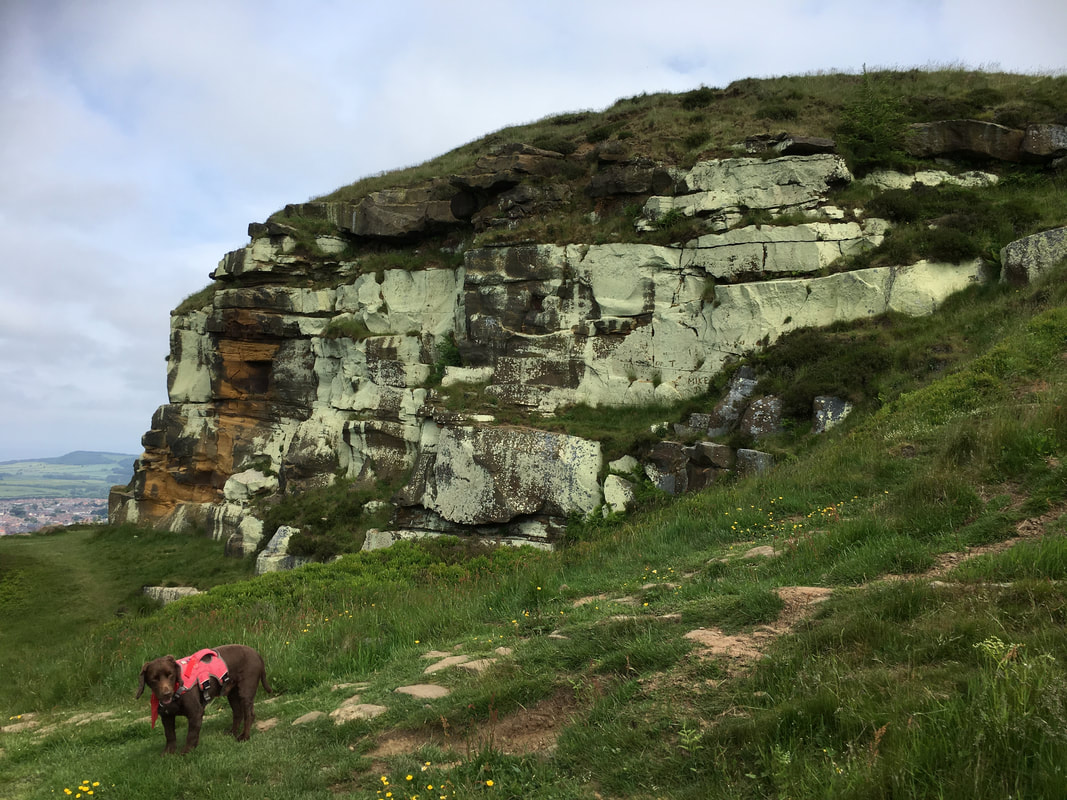 The panoramic view from Highcliffe Nab - the town below is Guisborough 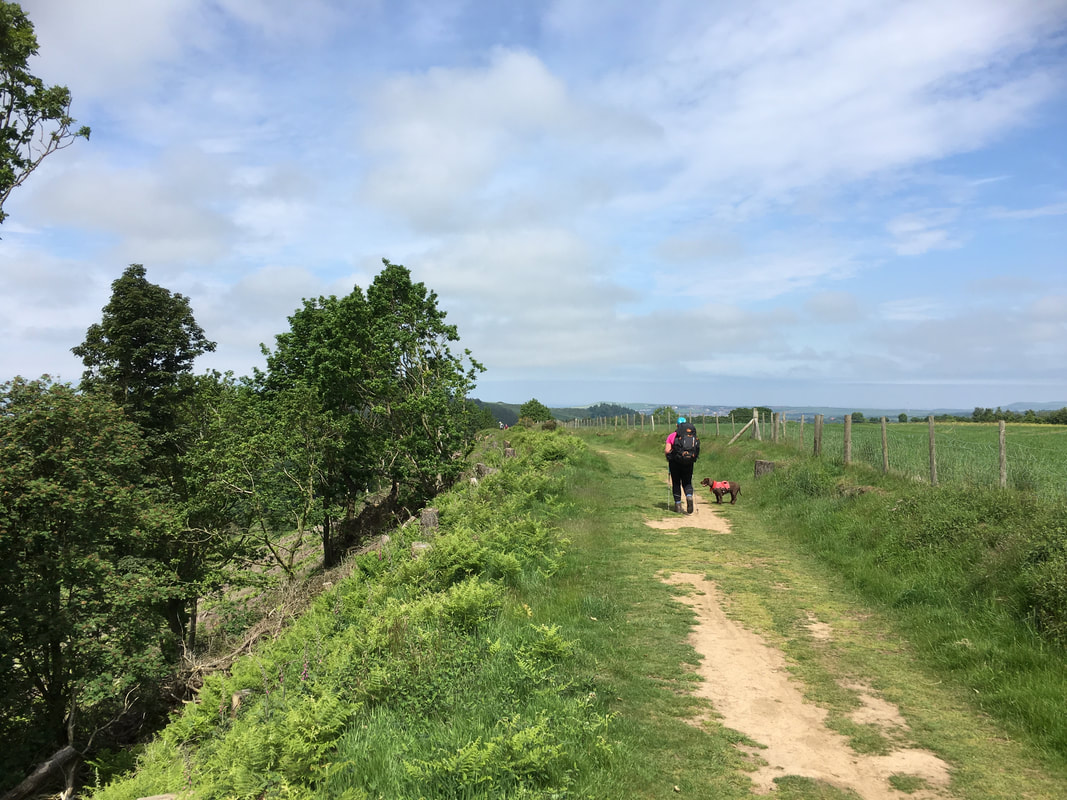 From Highcliffe Nab the route heads above Guisborough Woods 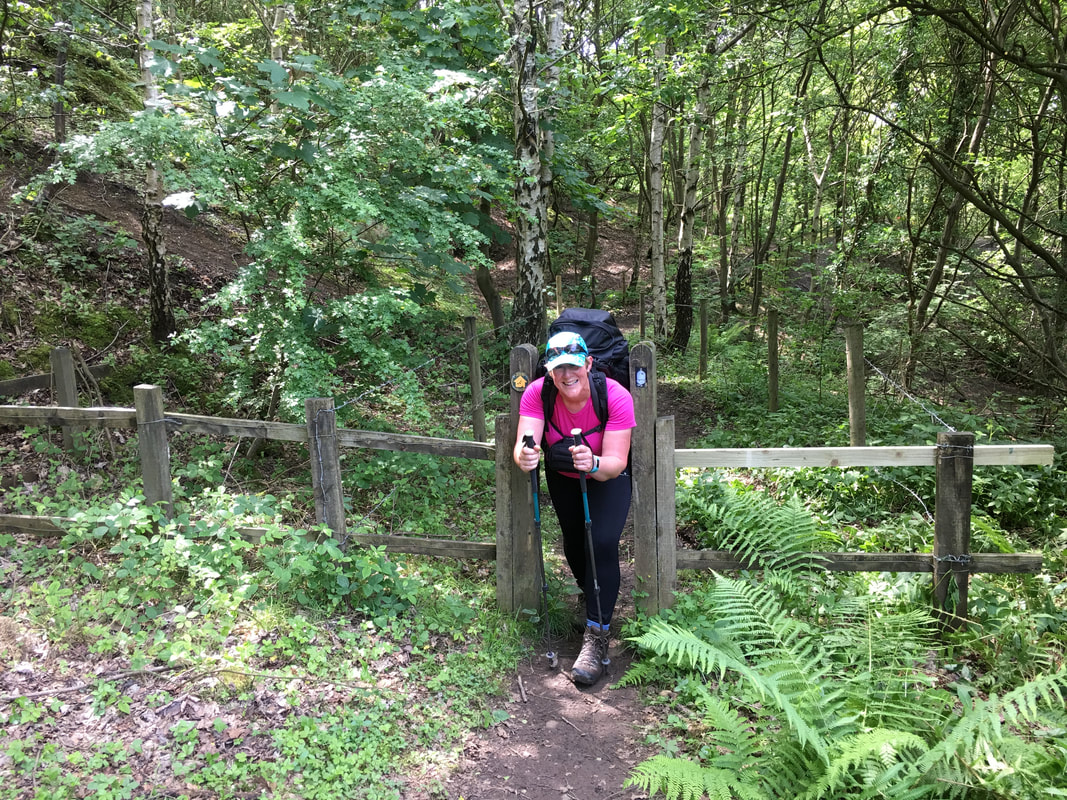 The disadvantages of travelling with a heavy rucksack 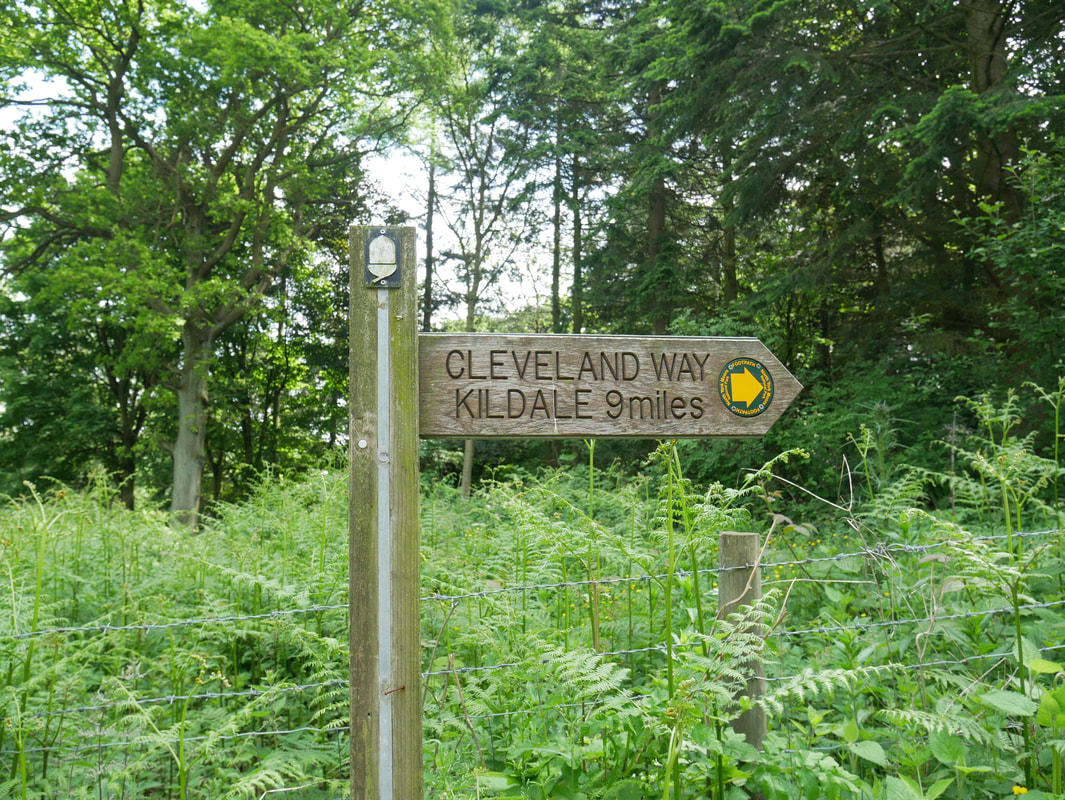 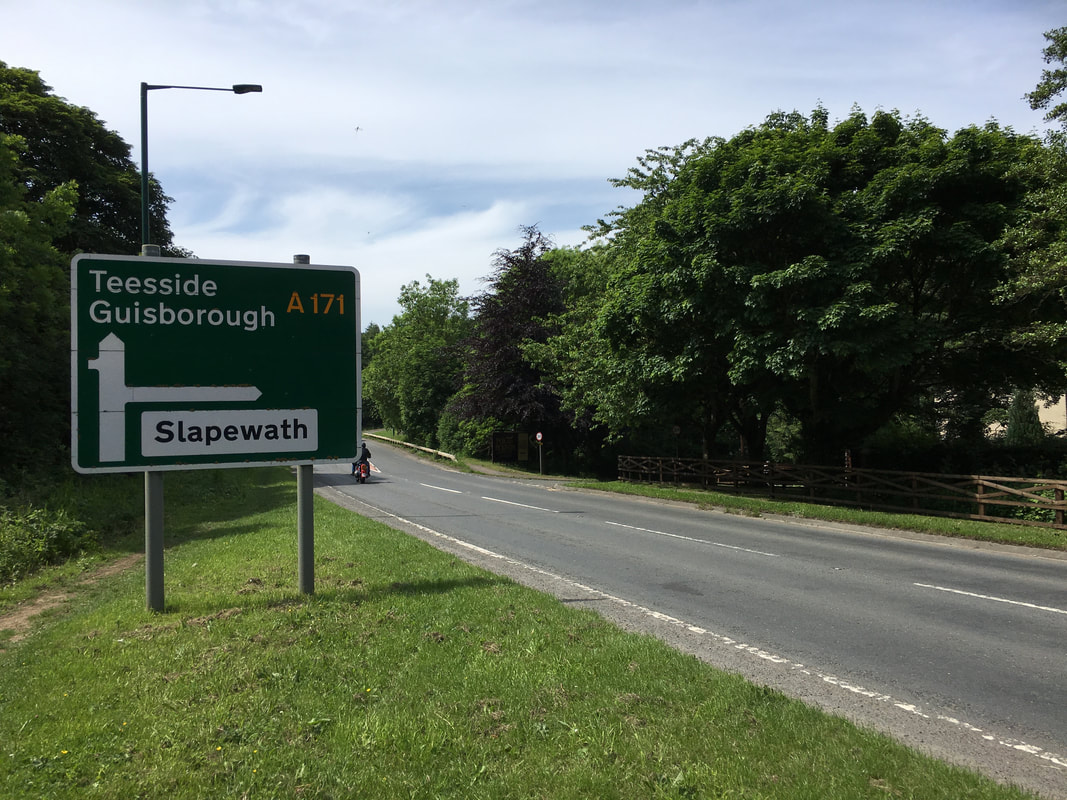 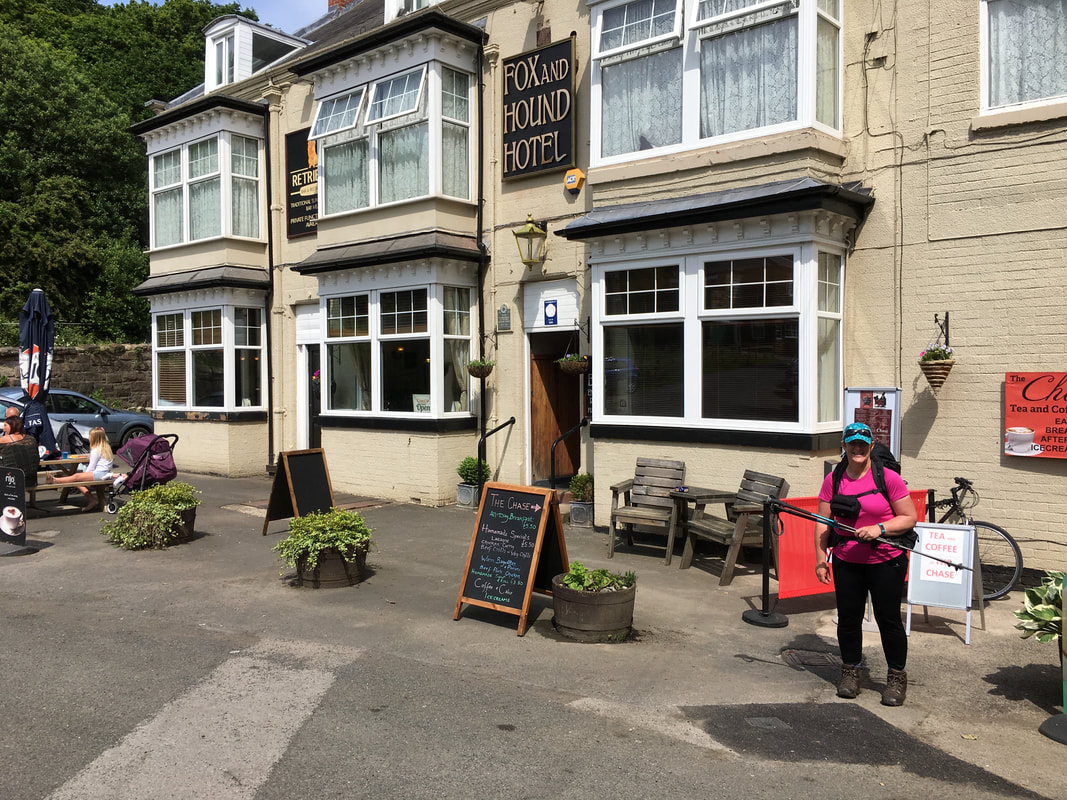 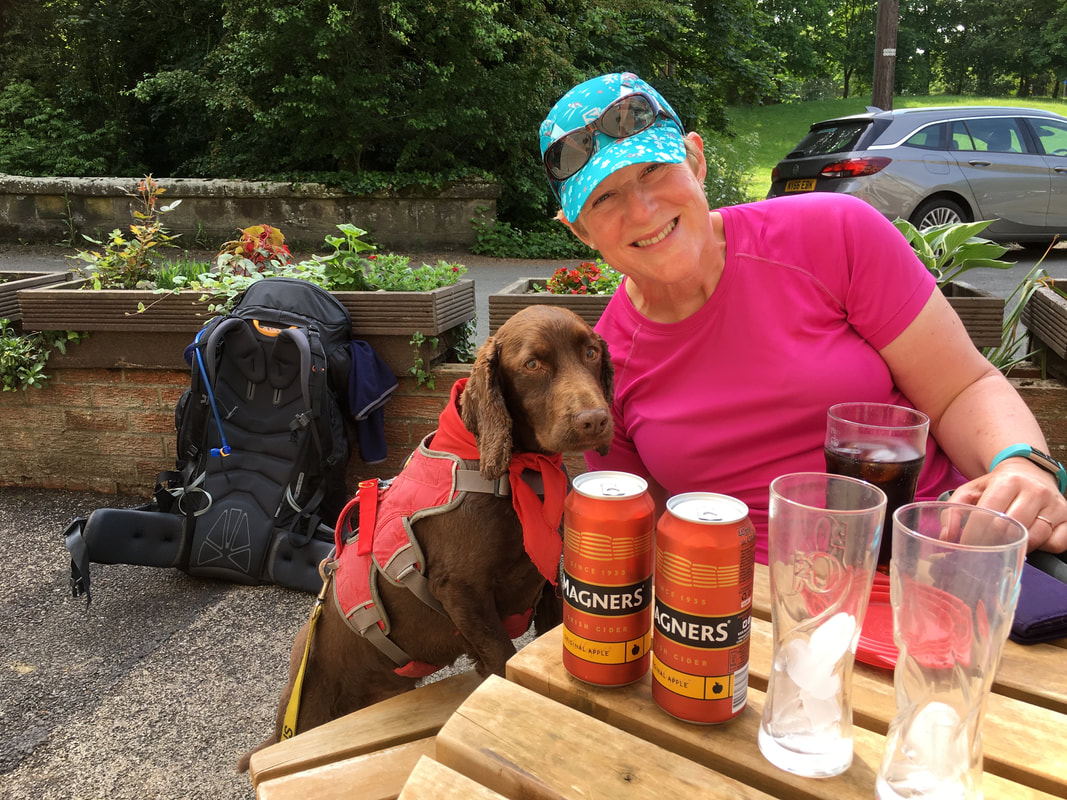 Cider and Diet Coke at The Fox & Hound, Slapewath - and very nice it was too.
​Fudge strikes a pose knowing full well that compliant behaviour results in food! 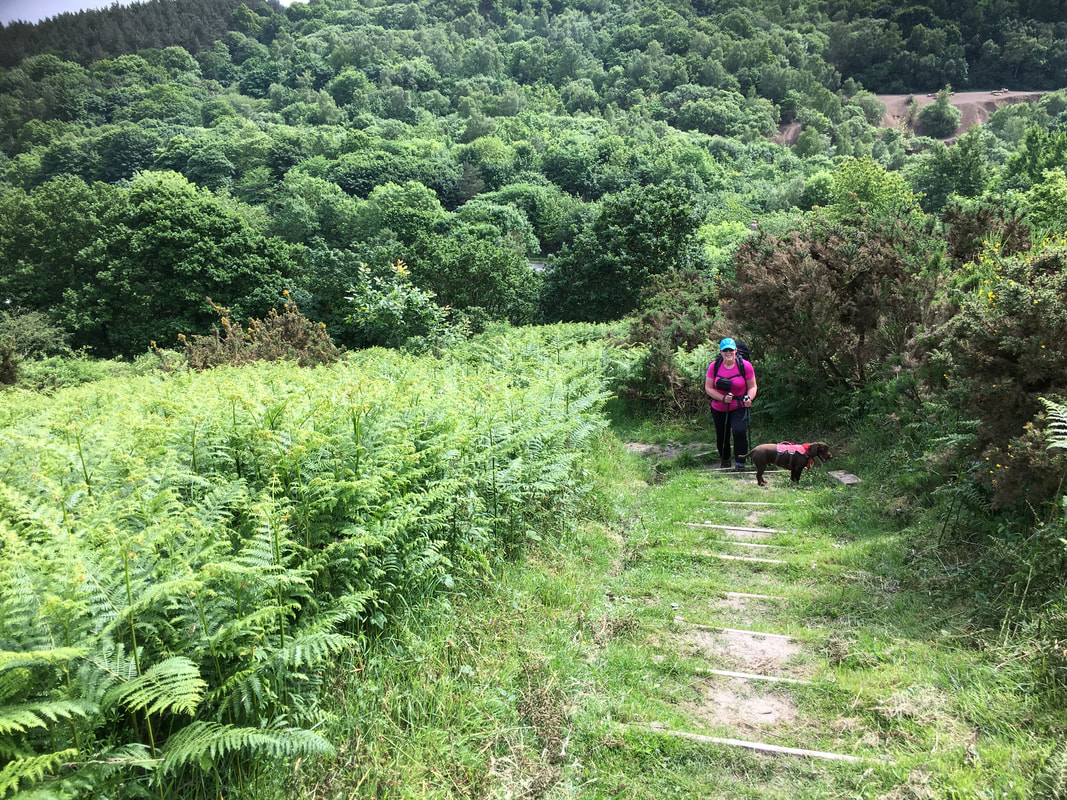 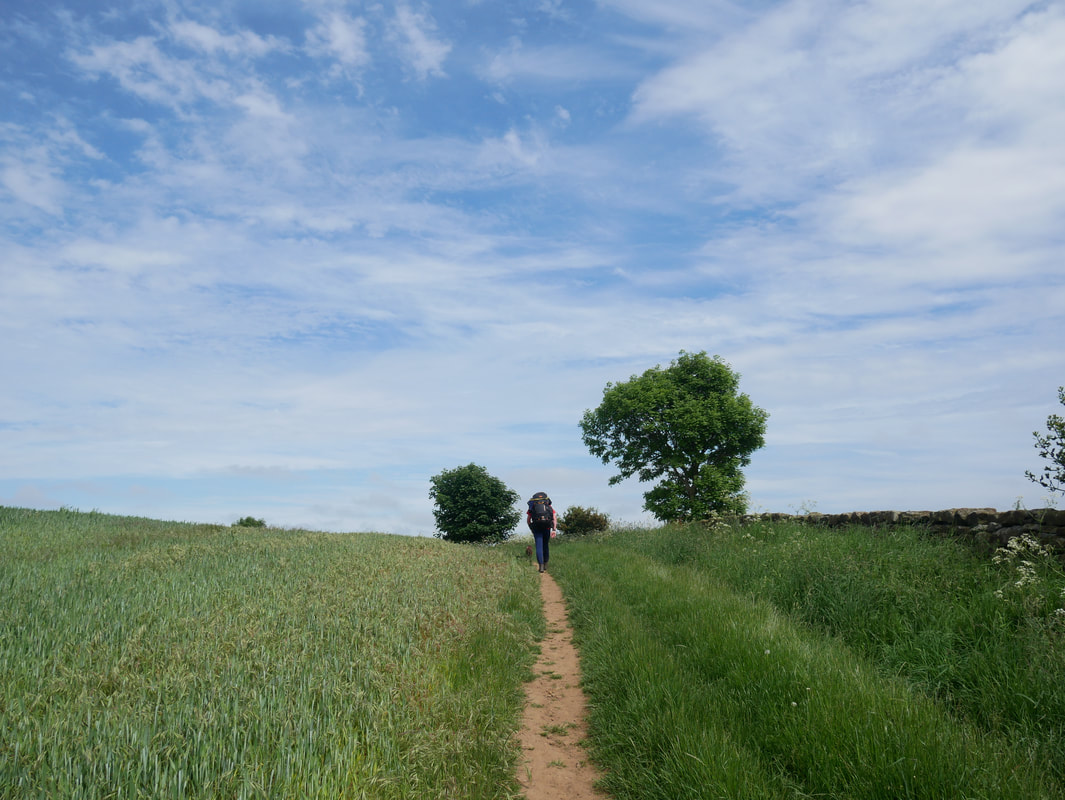 At last the steepness relented as we crested Airy Hill 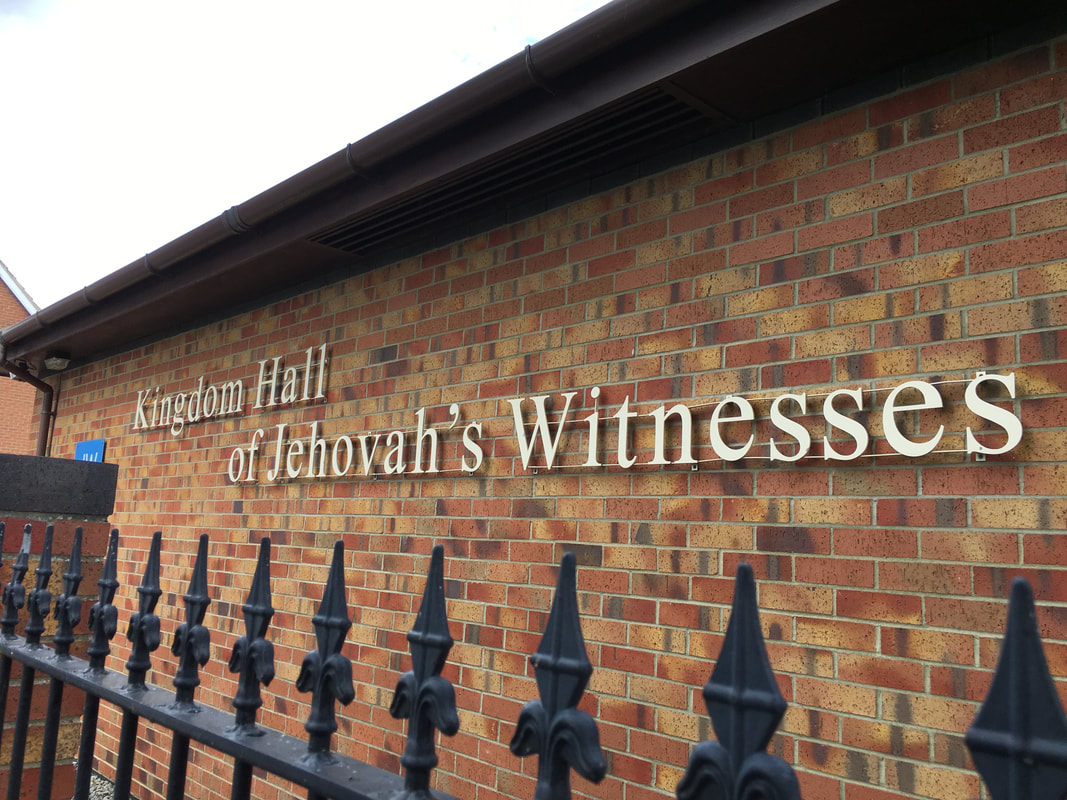 I was oh so tempted to knock on the door 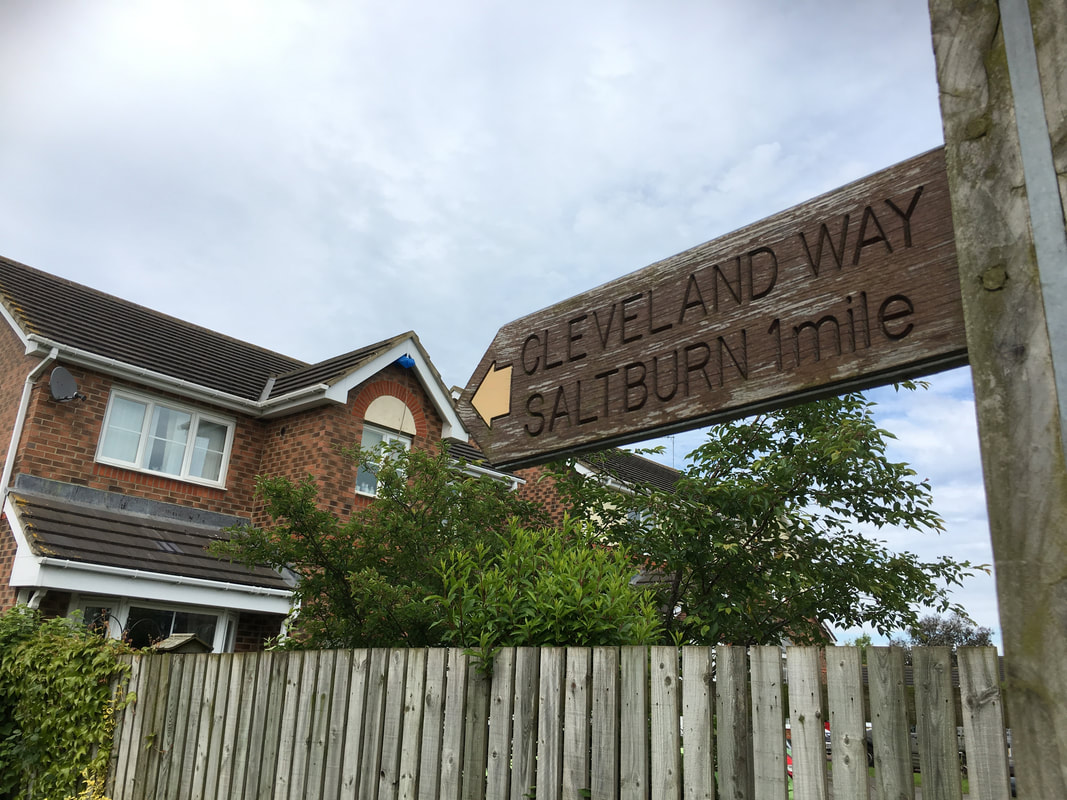 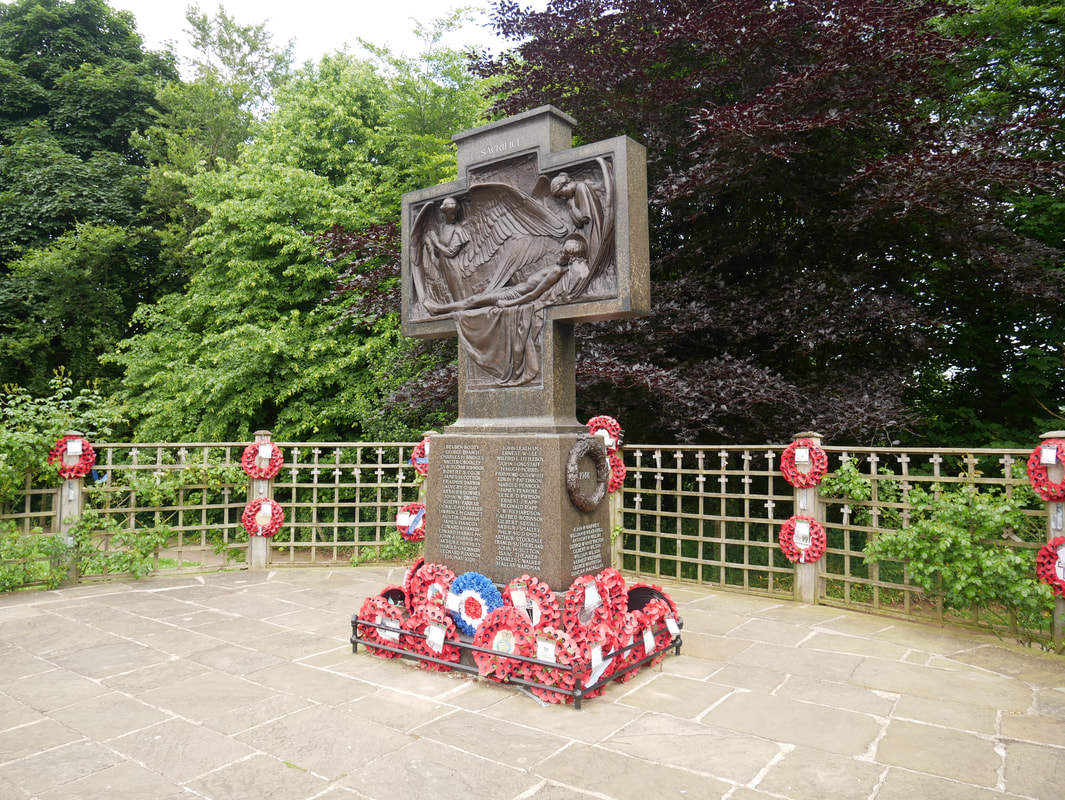 The War Memorial at Saltburn 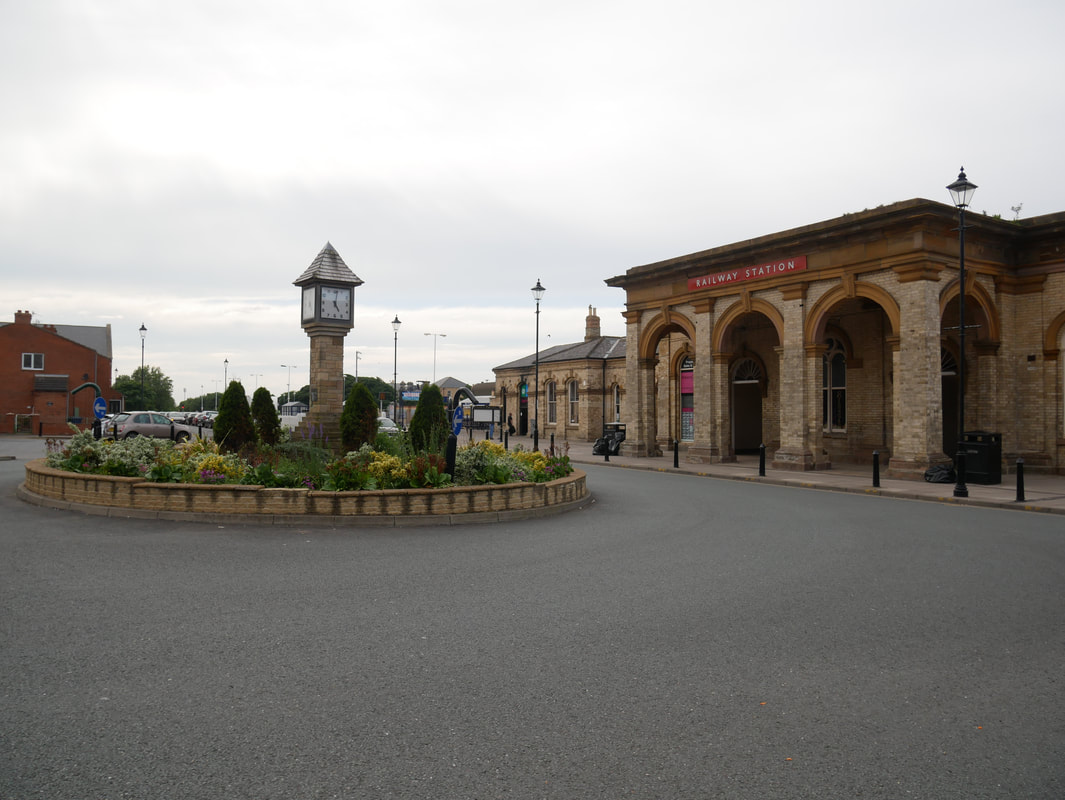 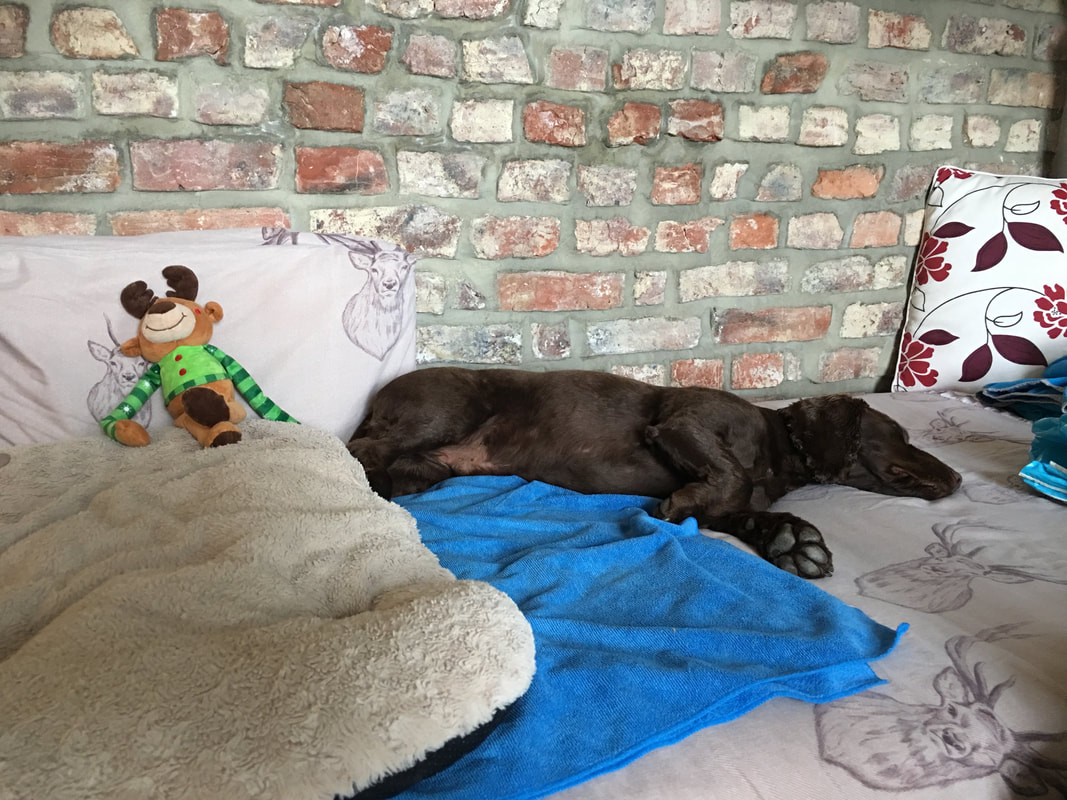 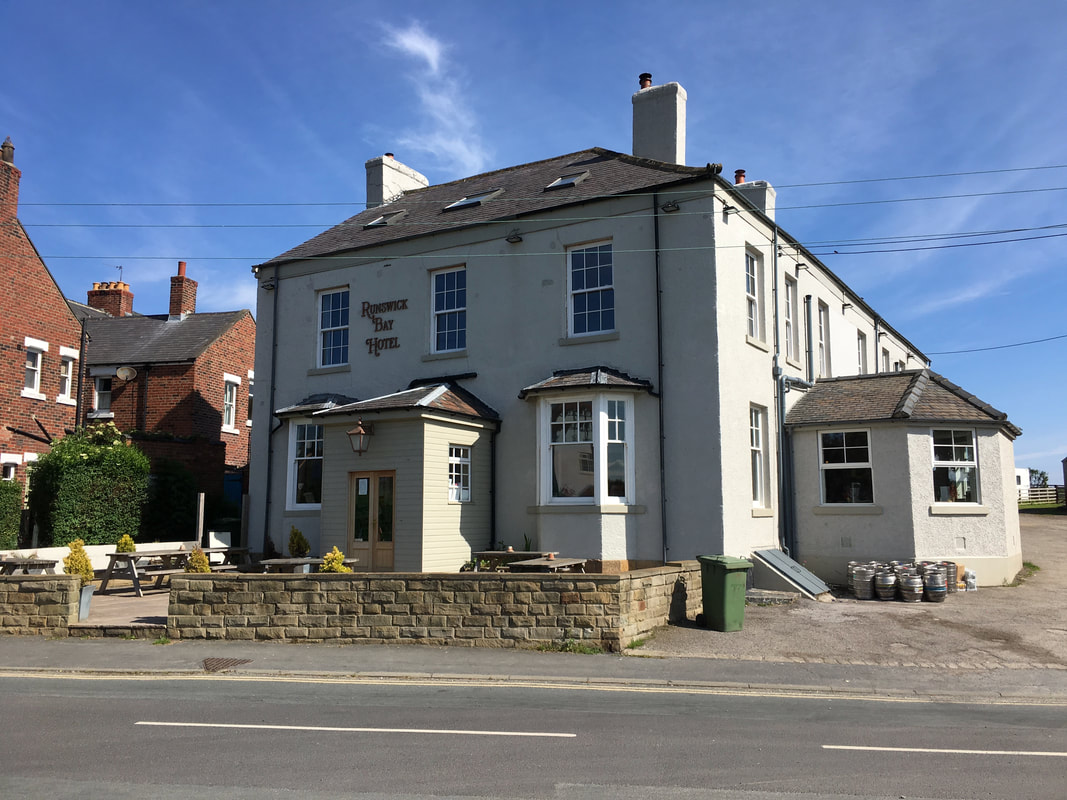