We started directly from our holiday cottage on Skeugh Head Lane however the walk can be started from Thwaite (DL11 6DR) or Angram (DL11 6DT) where there is limited verge parking available.

Established paths for the most part with quiet lanes.  The section from leaving Skeugh Head Lane to joining the Pennine Way via Blackburn Edge is on an intermittent path.  In poor visibility, the ability to navigate competently is vital.

Extremely warm even at first light. 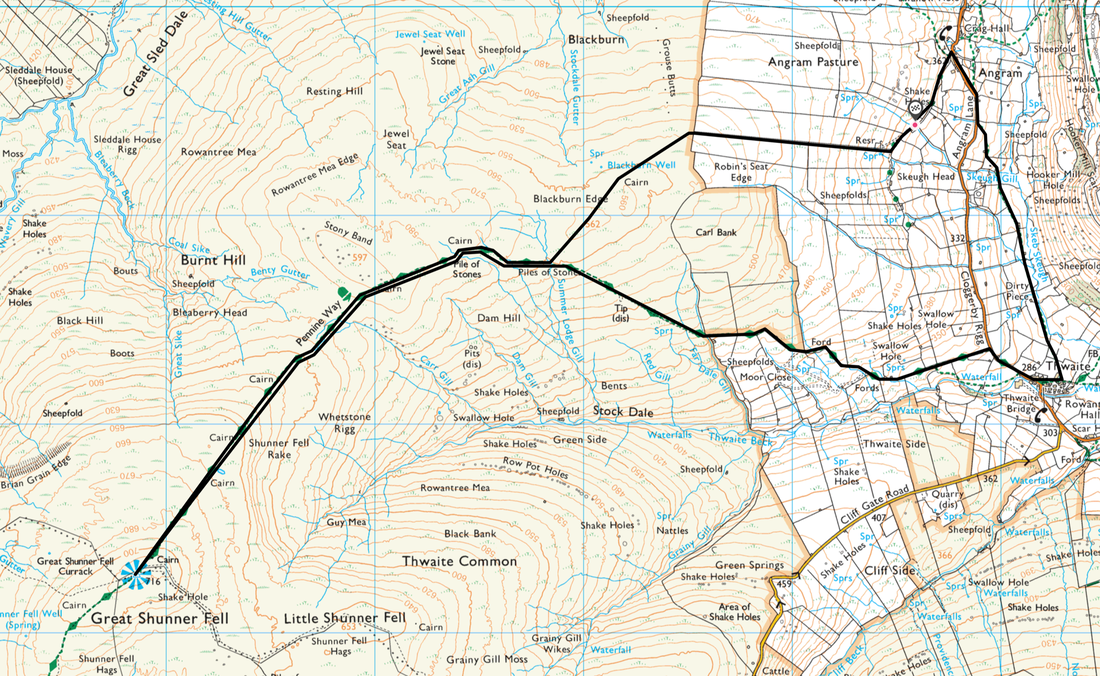 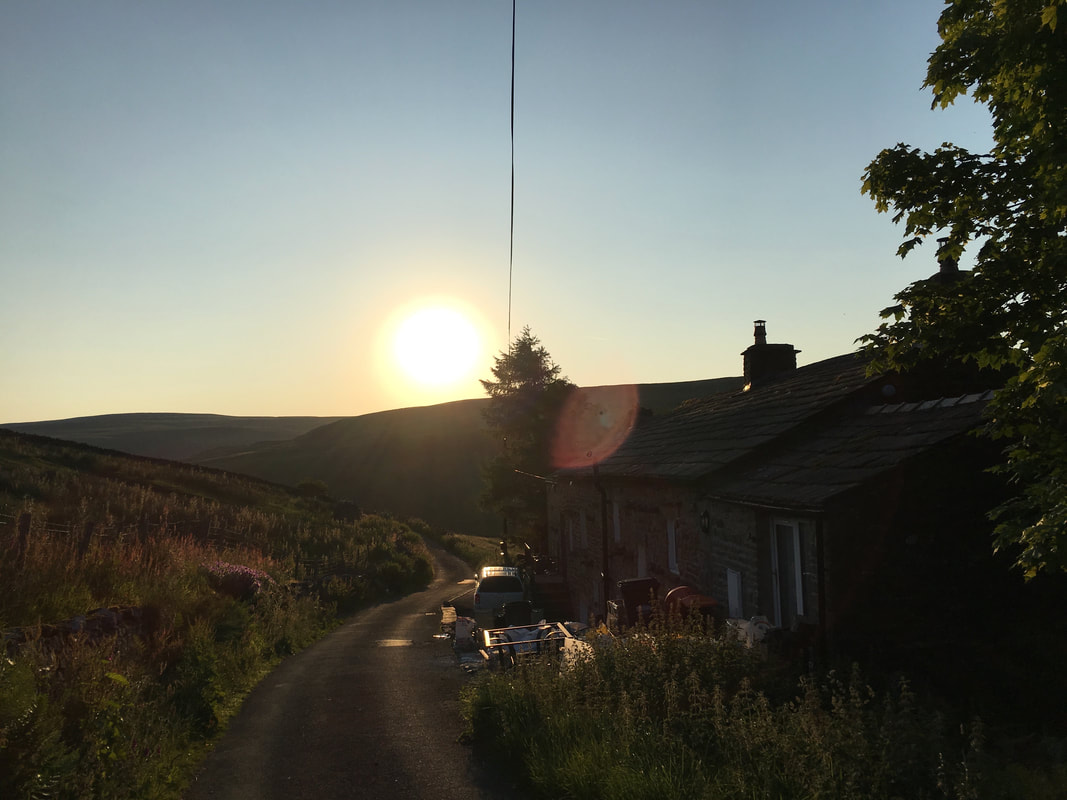 Sun is just up as we leave our holiday cottage on Skeugh Head Lane in Angram.
Today was forecasted as an extremely hot day therefore we were out of the door at 0545 - it was warm already. 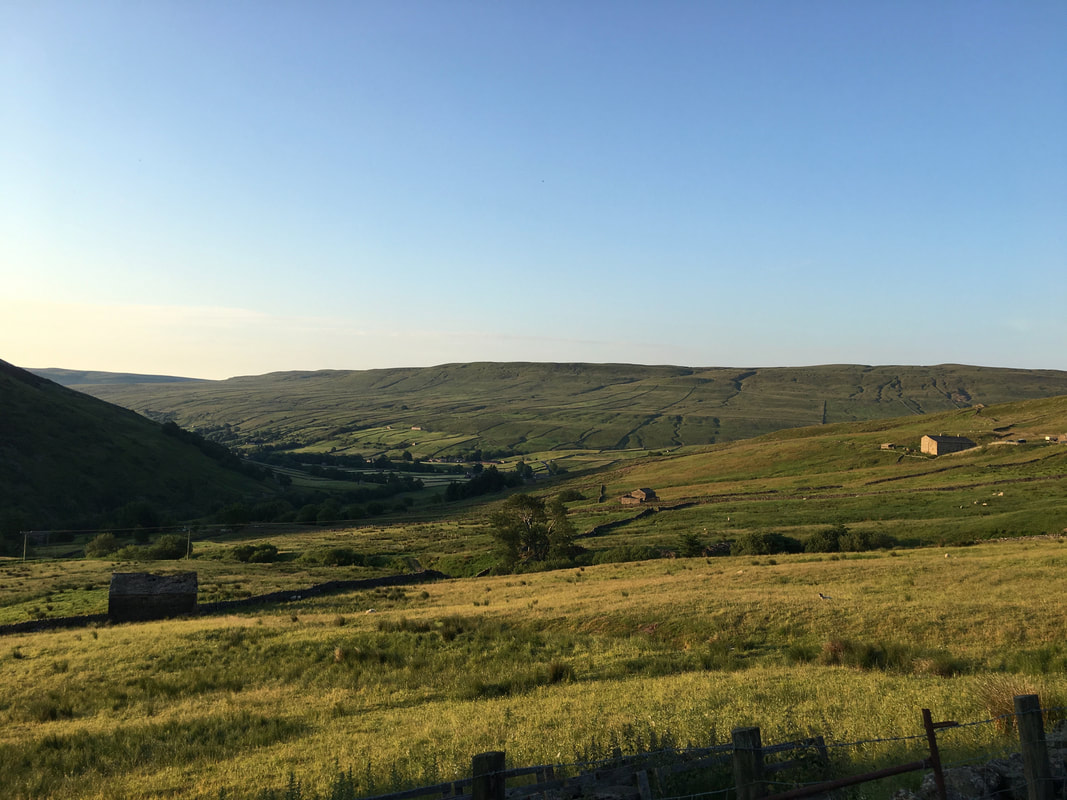 Heading up Skeugh Head Lane - not a cloud in the sky as we look over towards Muker & Ivelet Side. 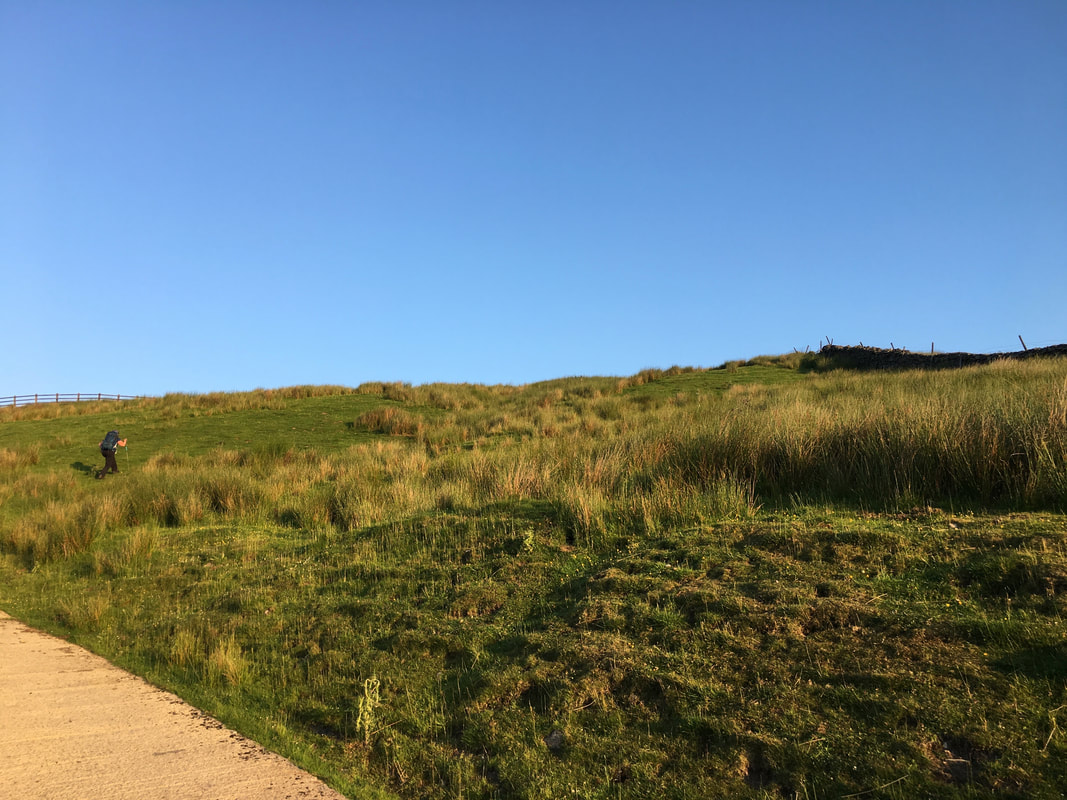 Leaving Skeugh Head Lane, the route follows a rough path alongside a wall up to Robin's Seat Edge 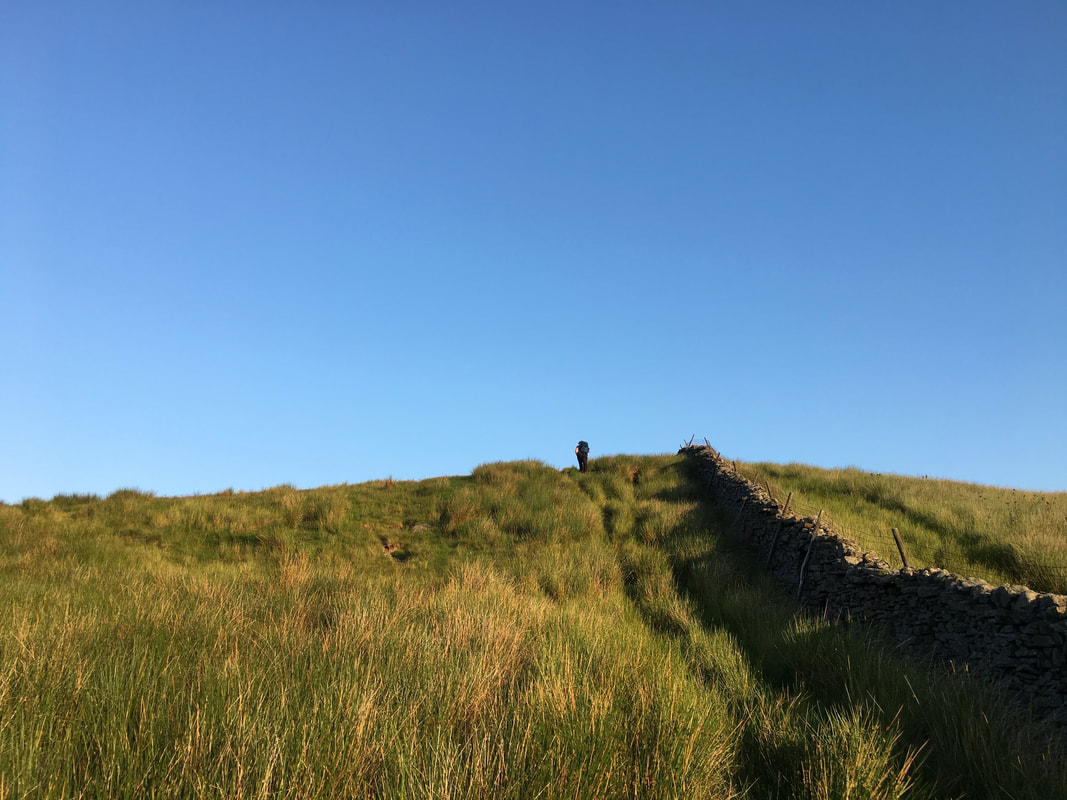 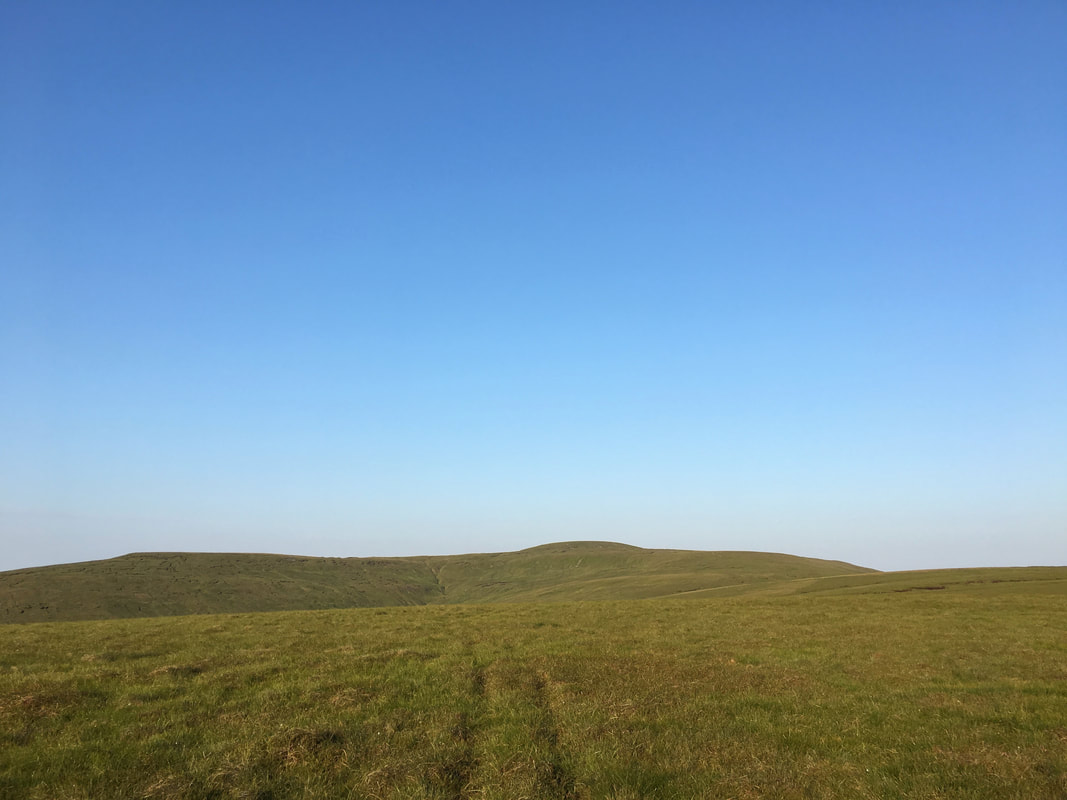 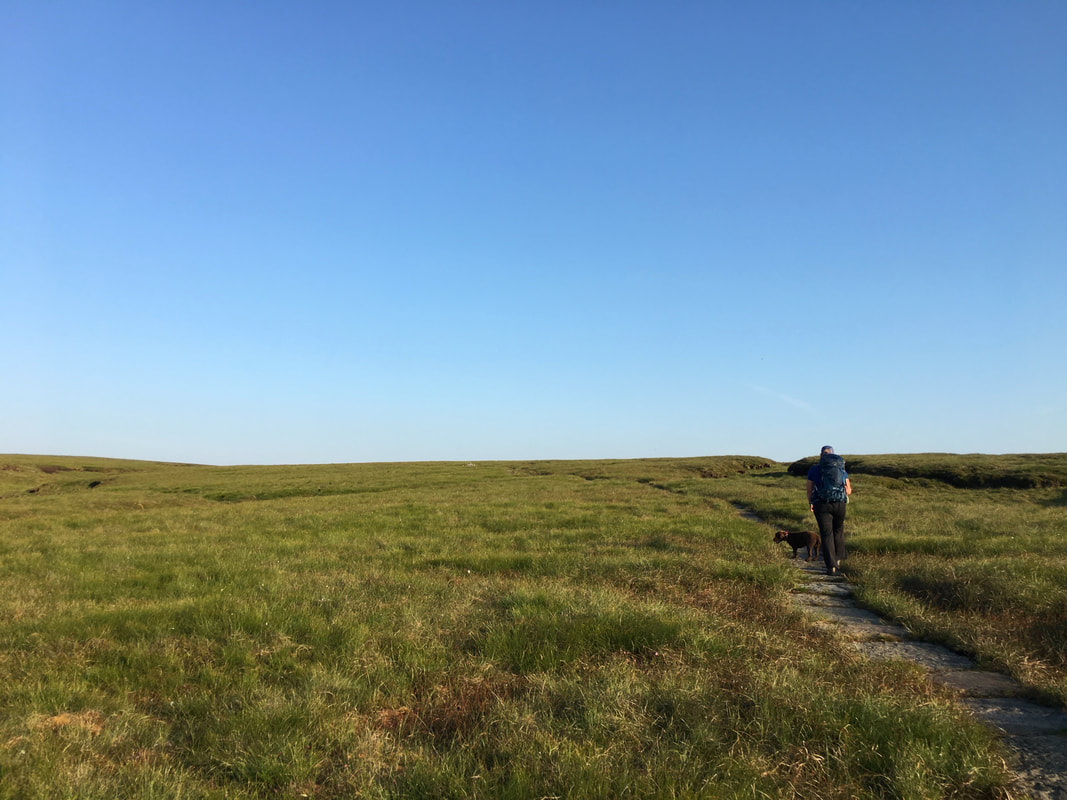 We were now on the Pennine Way.
We last walked this section (in the opposite direction) in 2015 during our Pennine Way walk. For anyone considering undertaking a long distance walk then the Pennine Way is certainly a challenge. A blog of our walk can be found here 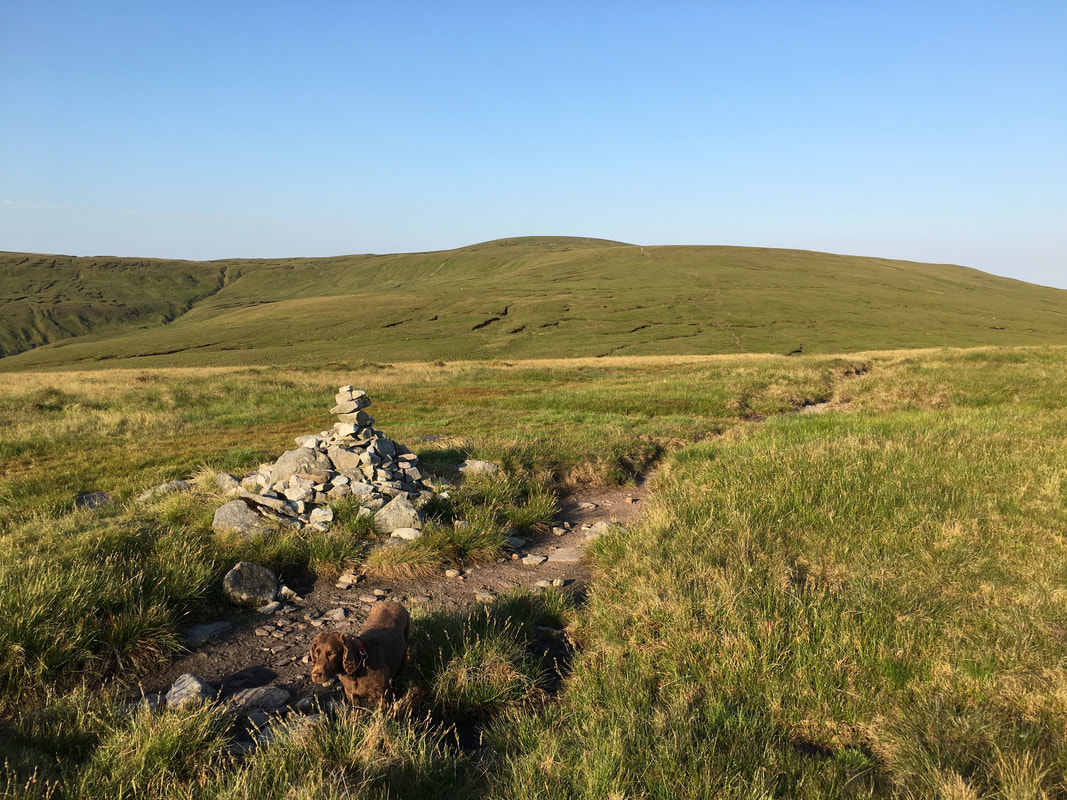 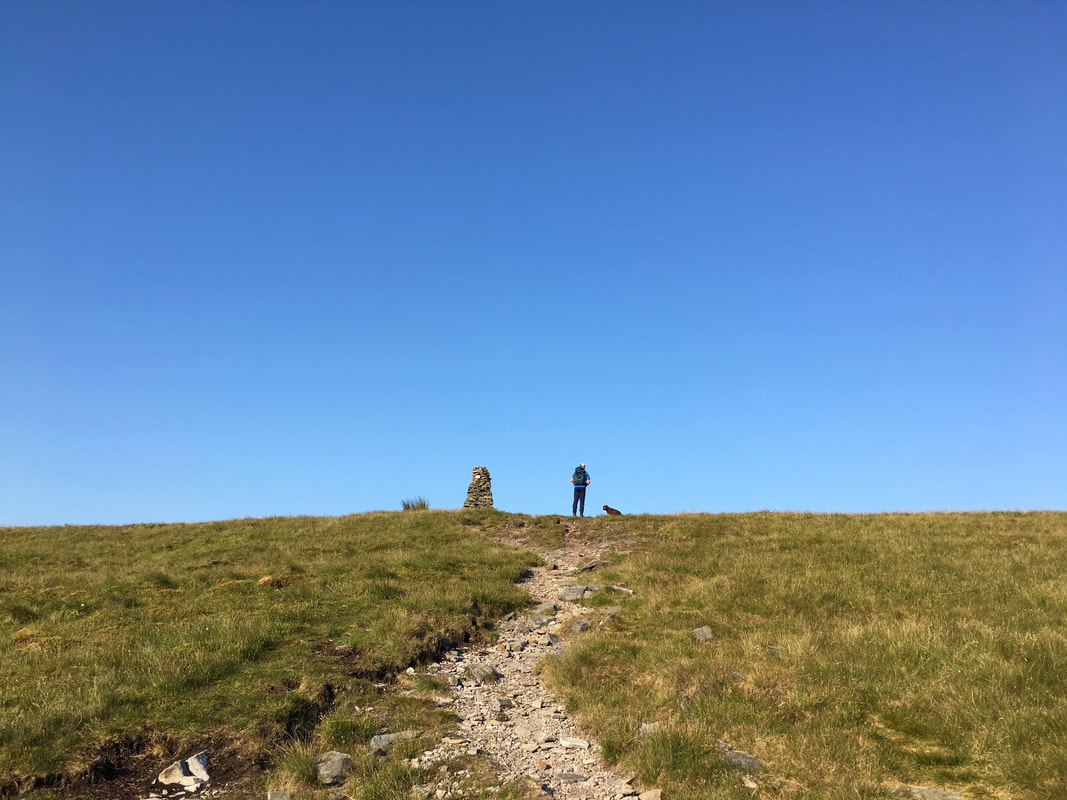 There are quite a few of these large "stone men" cairns dotted about. They were more than likely built by shepherd's.
As can be seen, the weather today was a tad different to when we were here last 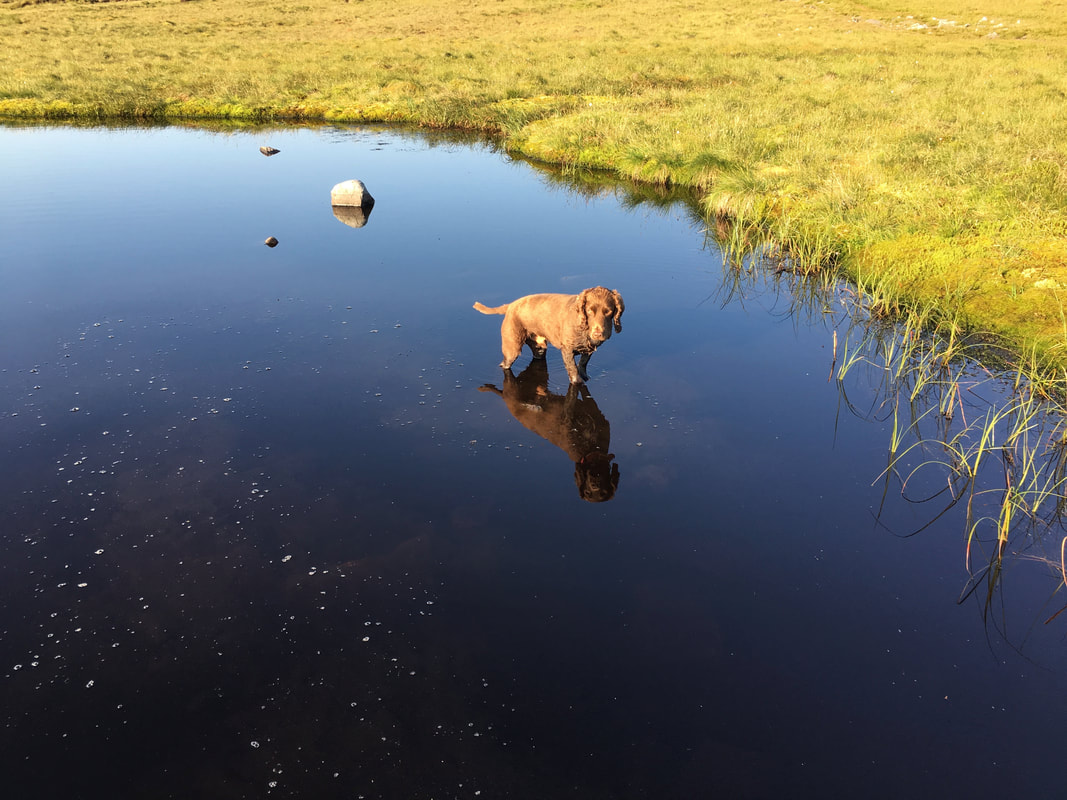 That's right Fudge - you cool those paws off 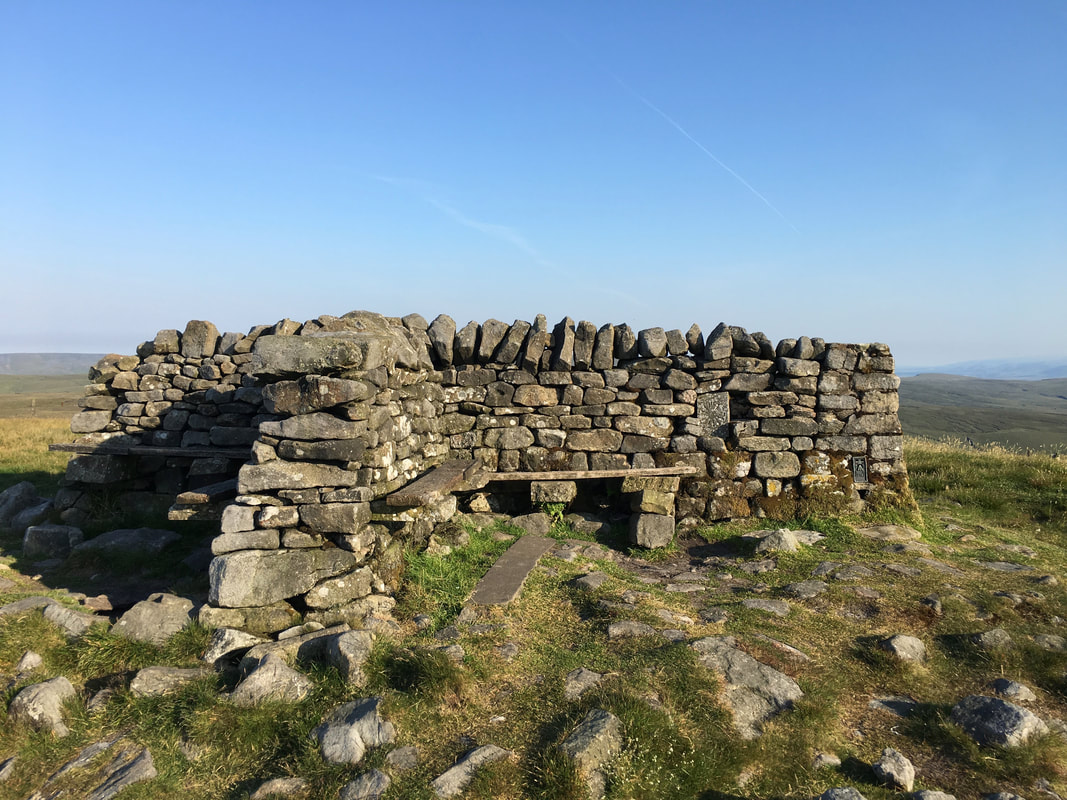 The summit cross shelter on Great Shunner Fell.  The Trig Point forms part of the cross shelter and can be seen to the right.
At 2349ft the fell is the third highest mountain in the Yorkshire Dales after Whernside and Ingleborough. It stands on the broad watershed between Wensleydale and Swaledale, is over eight miles long and is approximately three and a half miles wide from the Buttertubs Pass in the east to the col with the Mallerstang fells to the west. 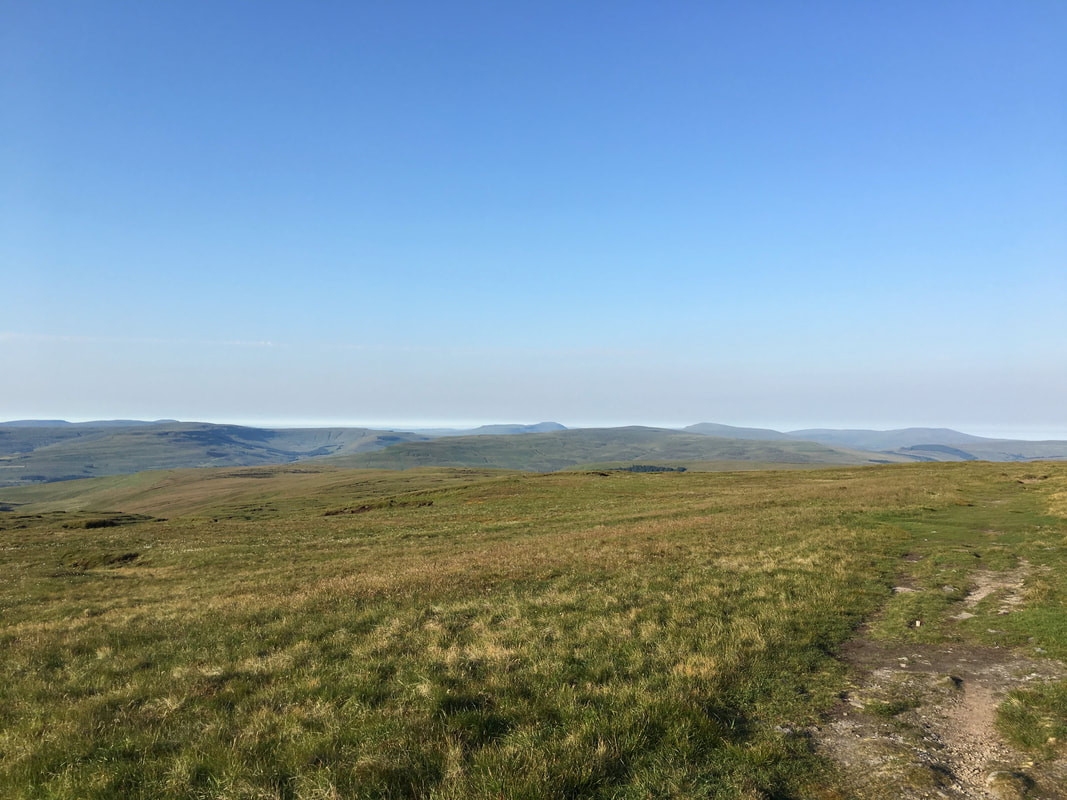 Ingleborough way in the distance in the centre of shot 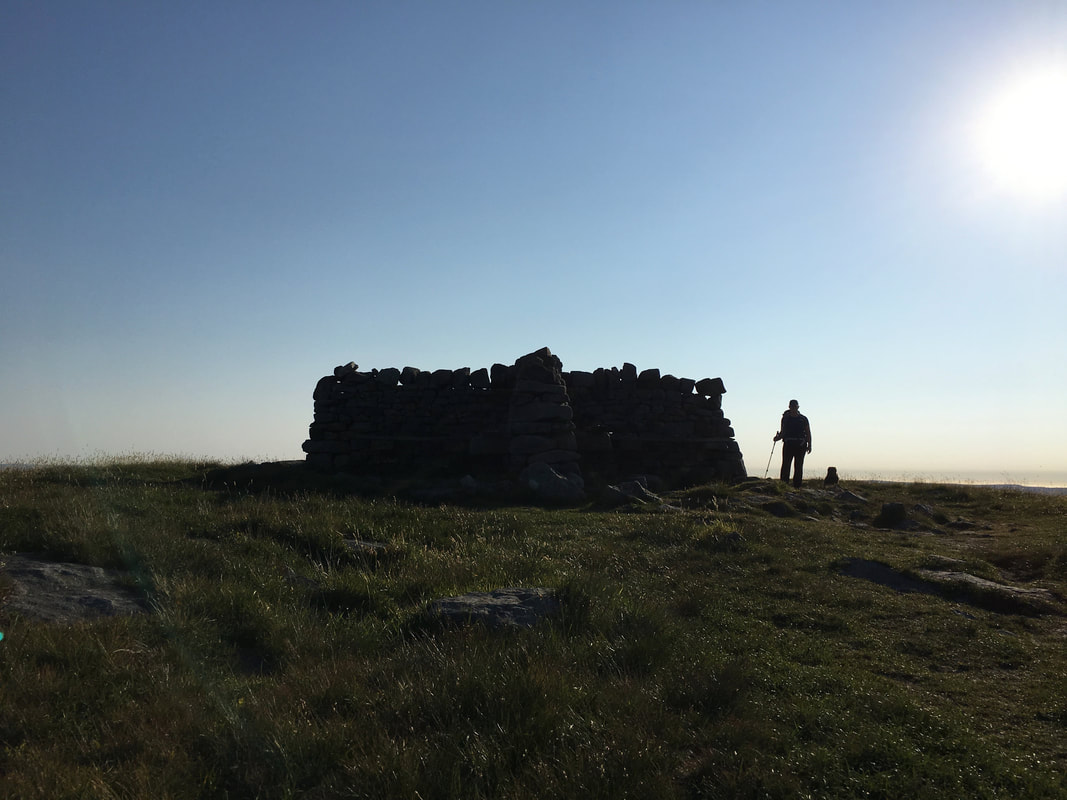 Angie & Fudge in silhouette on the summit of Great Shunner Fell 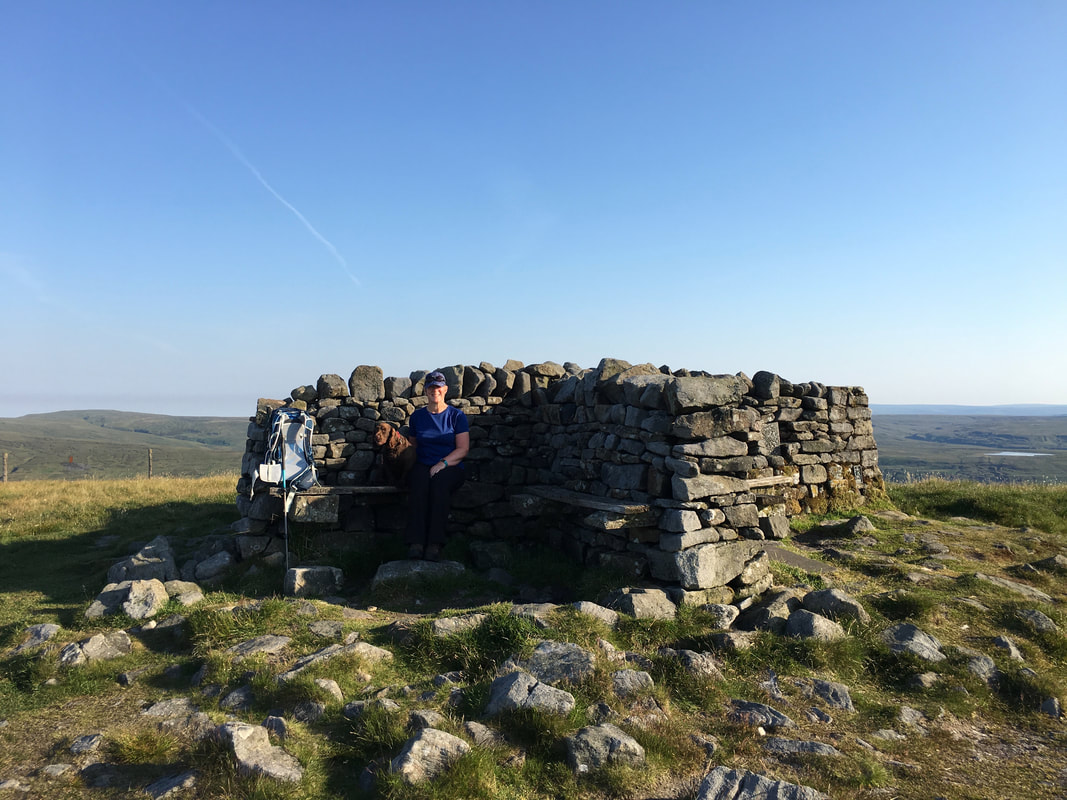 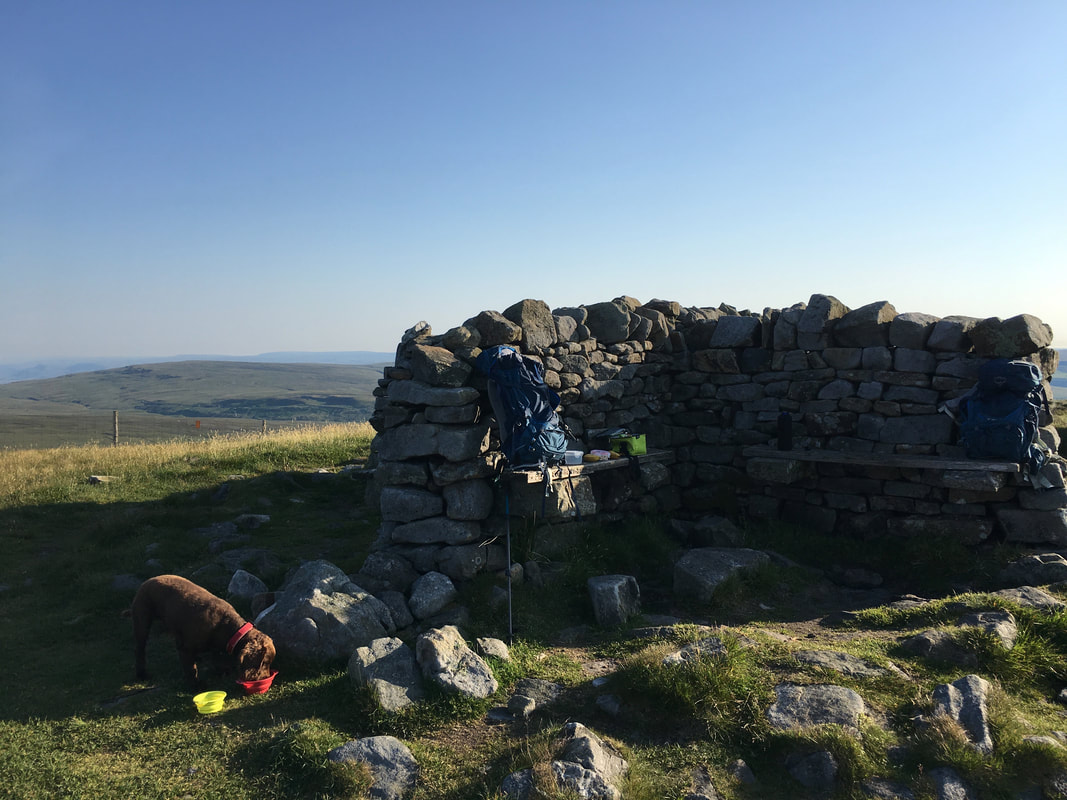 Time for Fudge's breakfast prior to leaving for Thwaite 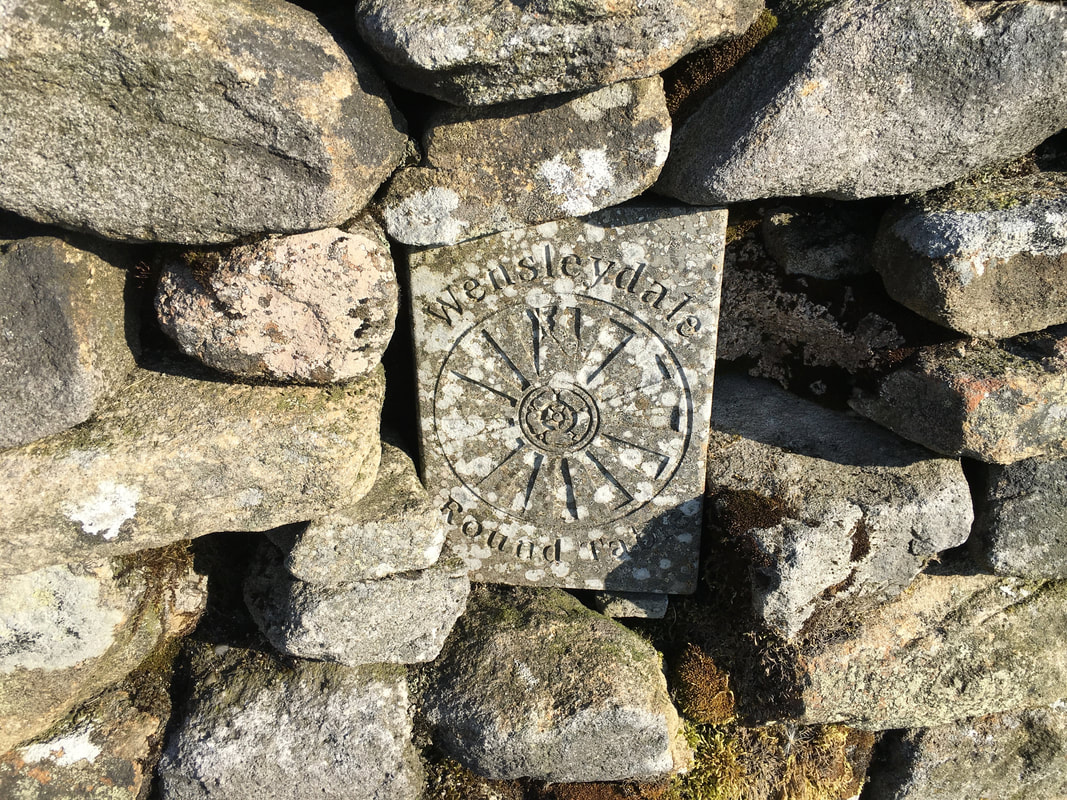 The Wensleydale Round Table Plaque which is set into the cross shelter on the summit.
Despite a bit of research, I can only assume they built the cross shelter and then left the stone plaque there on completion. 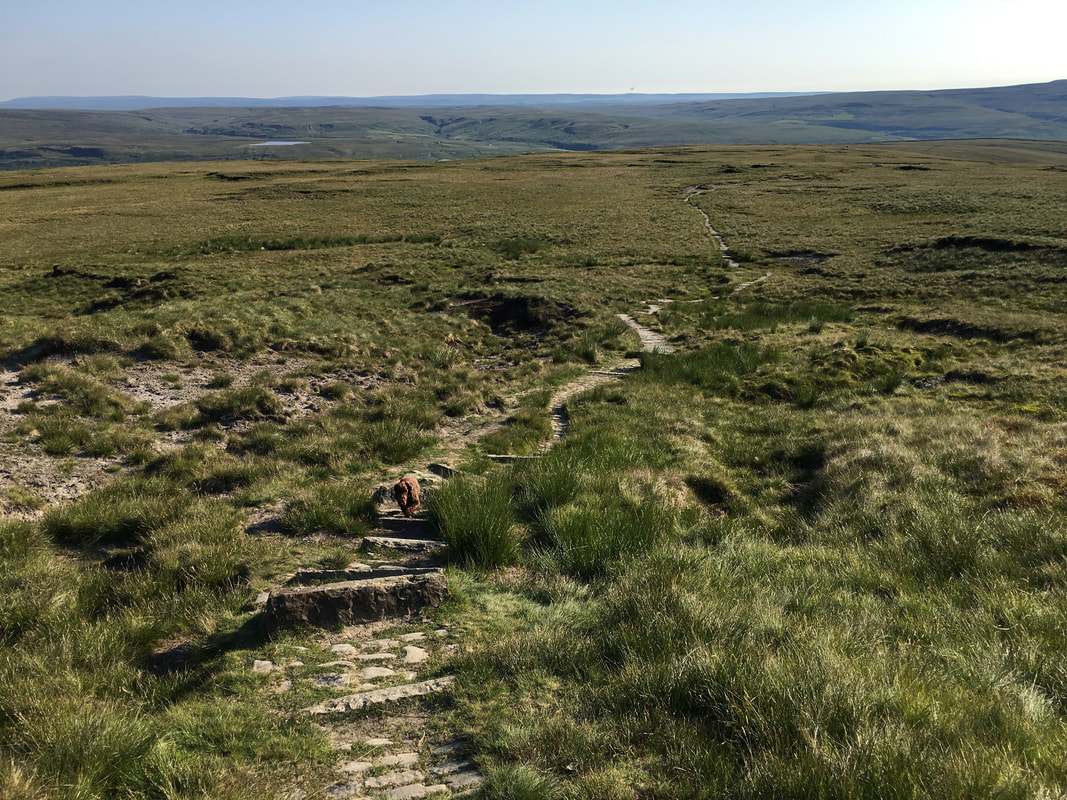 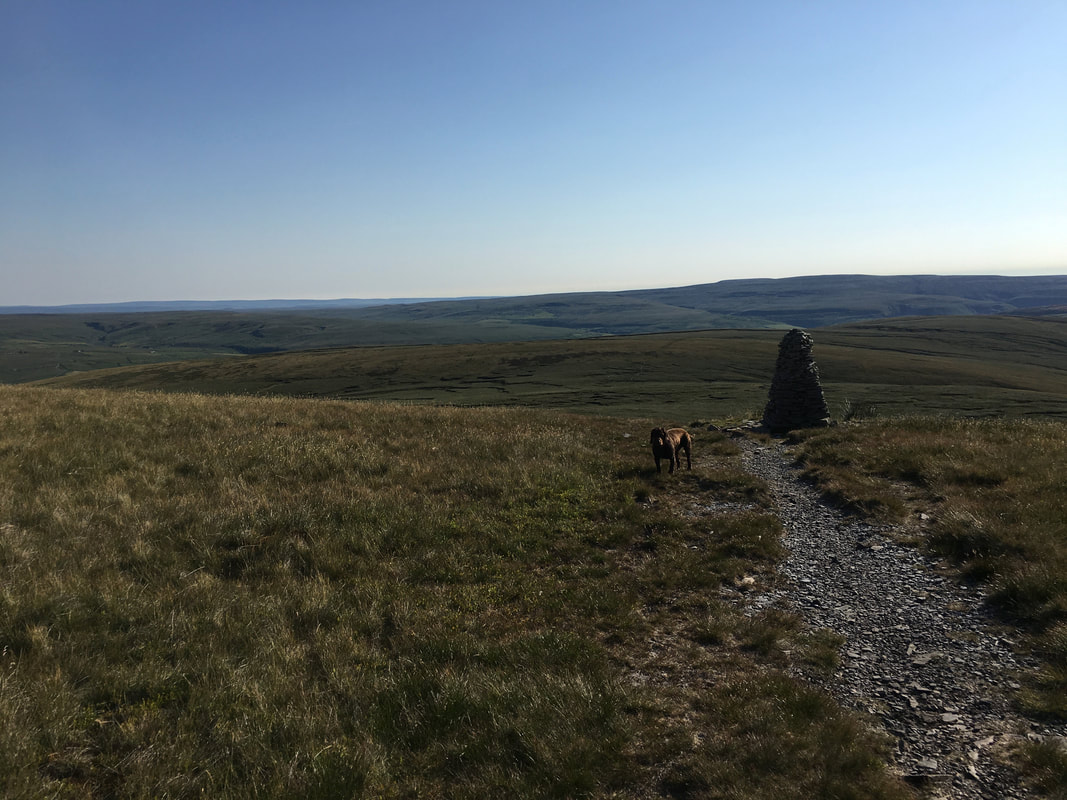 Another "stone man" as we descend into Thwaite 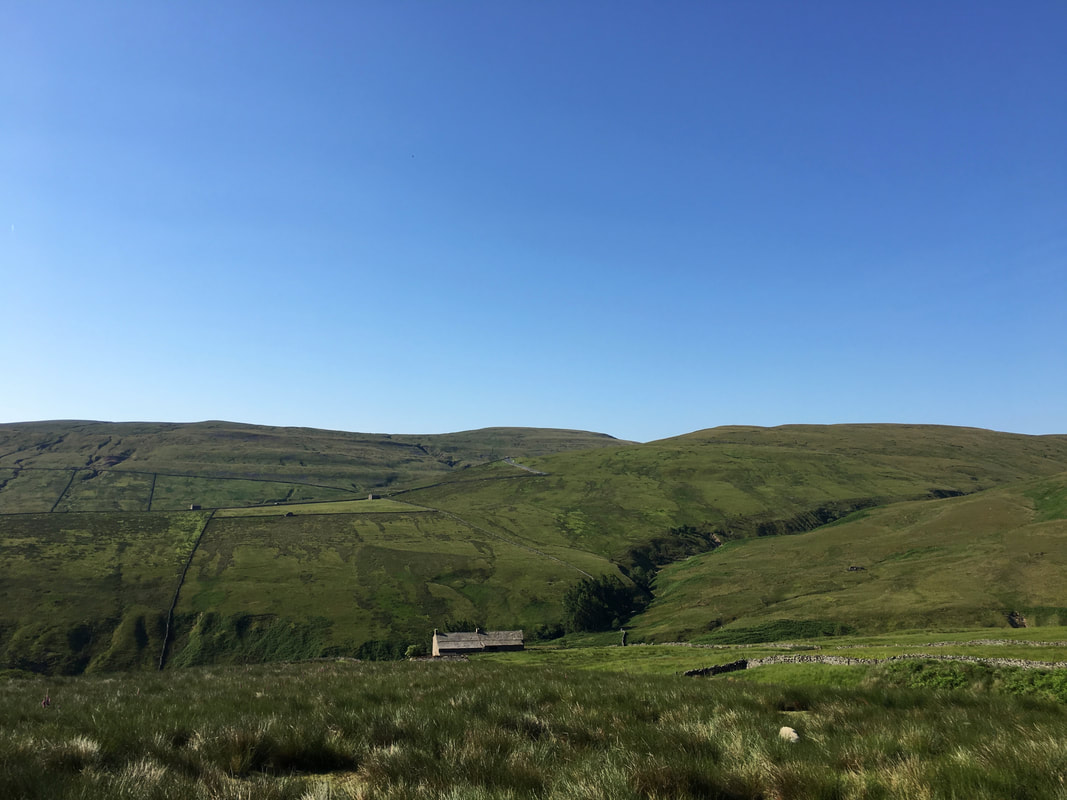 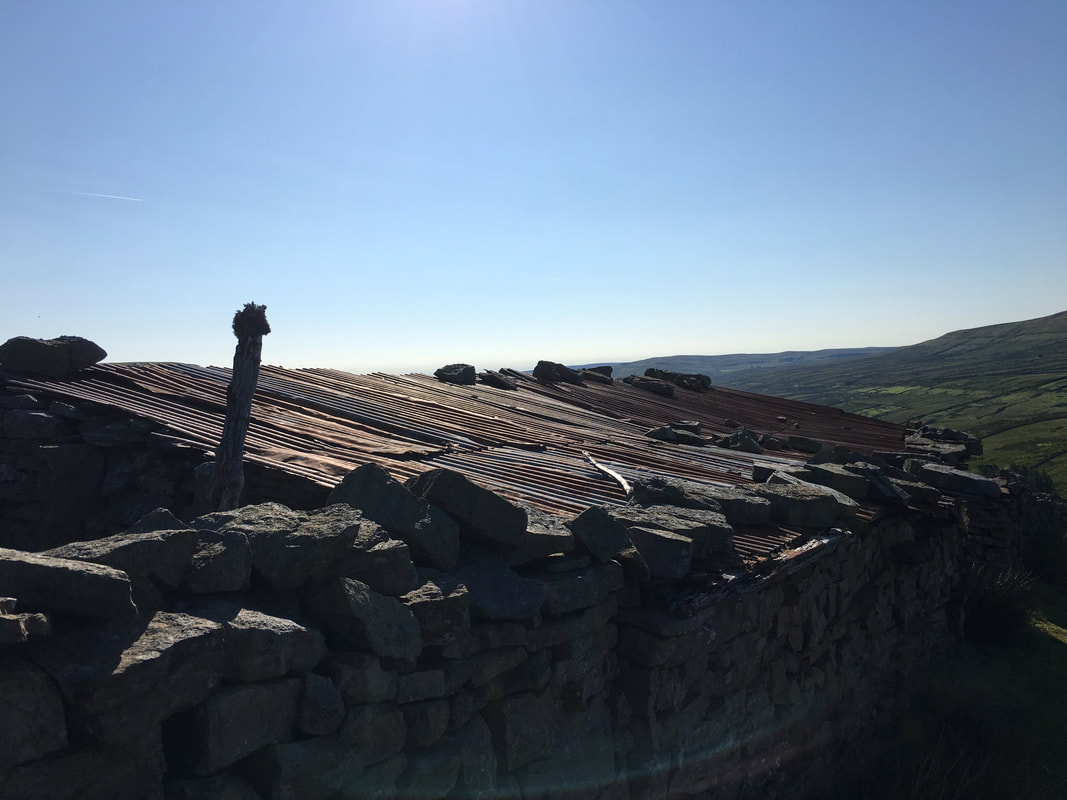 One way of keeping your corrugated roof on I suppose 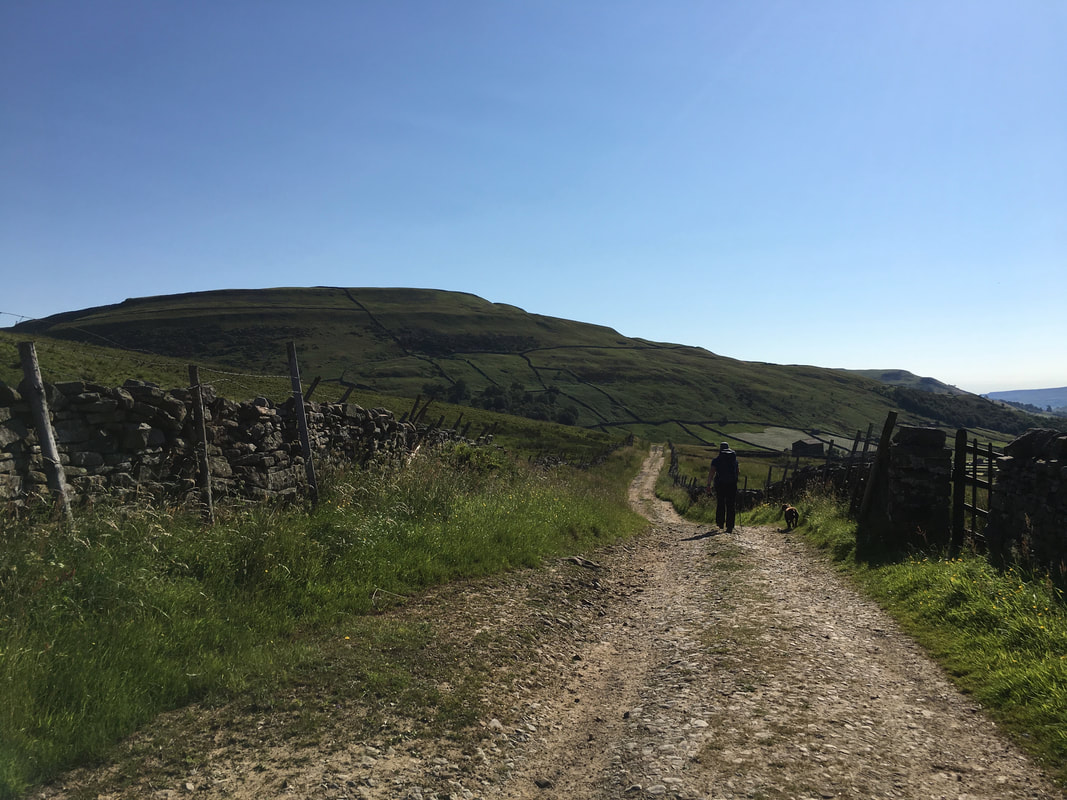 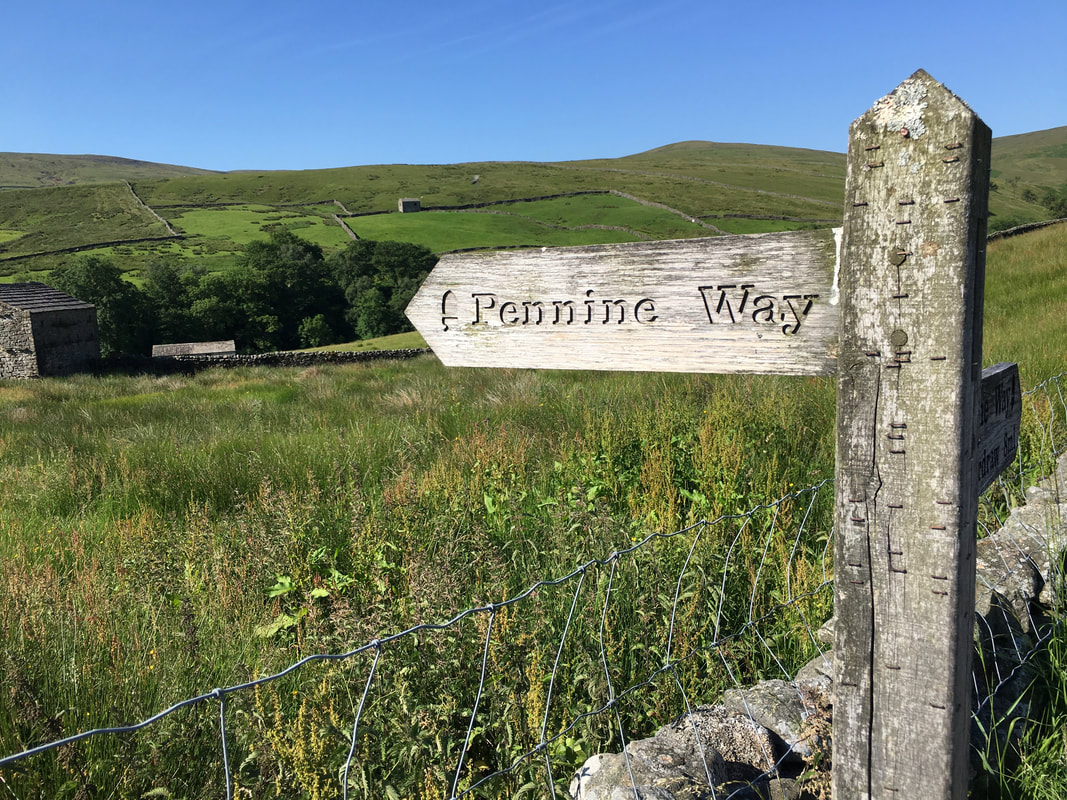 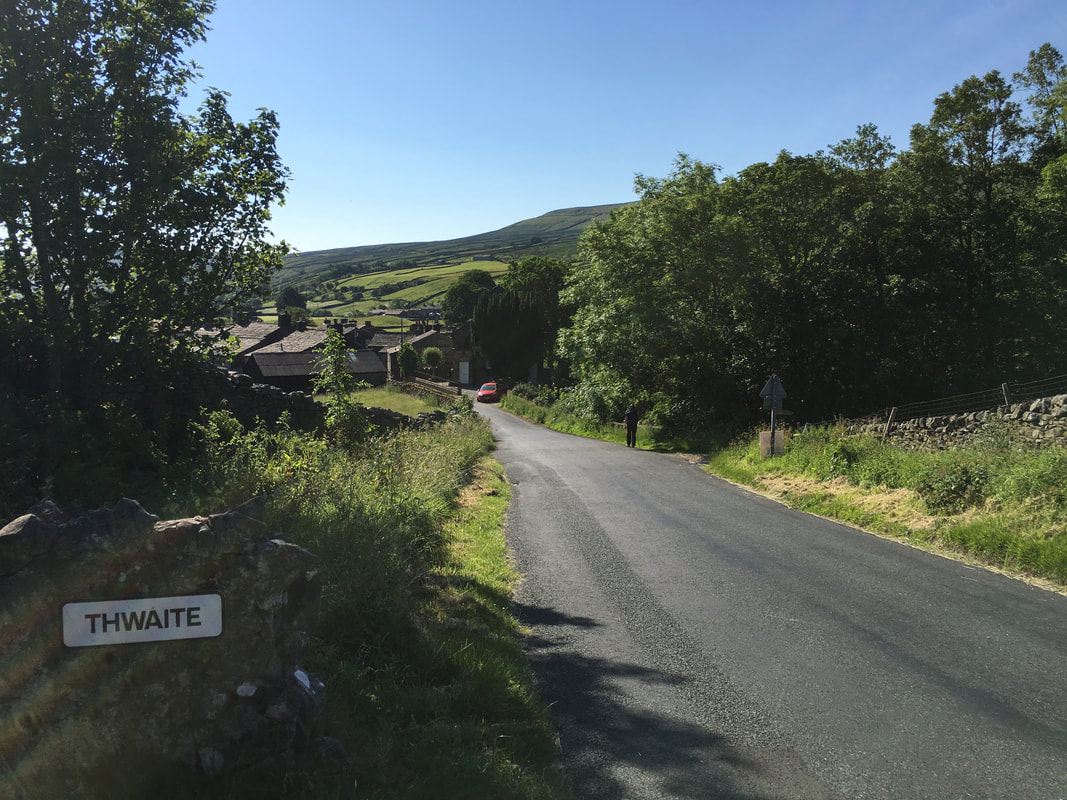 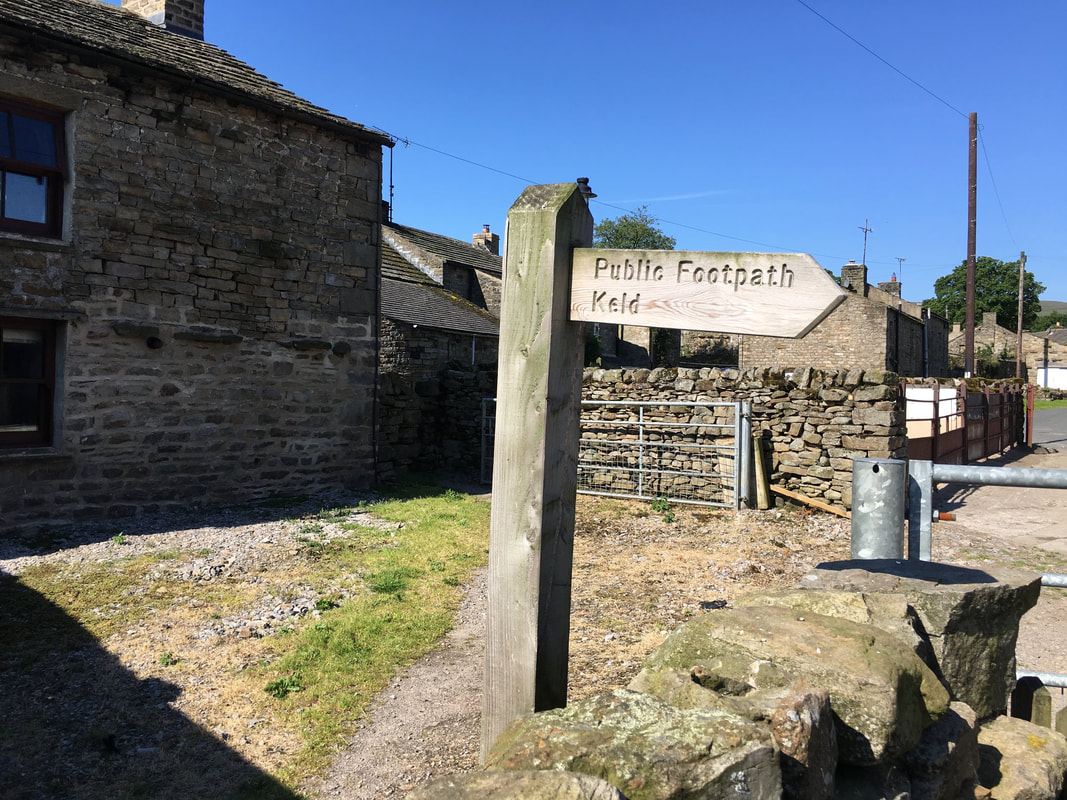 Once through Thwaite we parted company with the Pennine Way and headed towards Keld.
The Pennine Way continues on to Keld but via North Gang Scar along the eastern flank of Kisdon Hill. 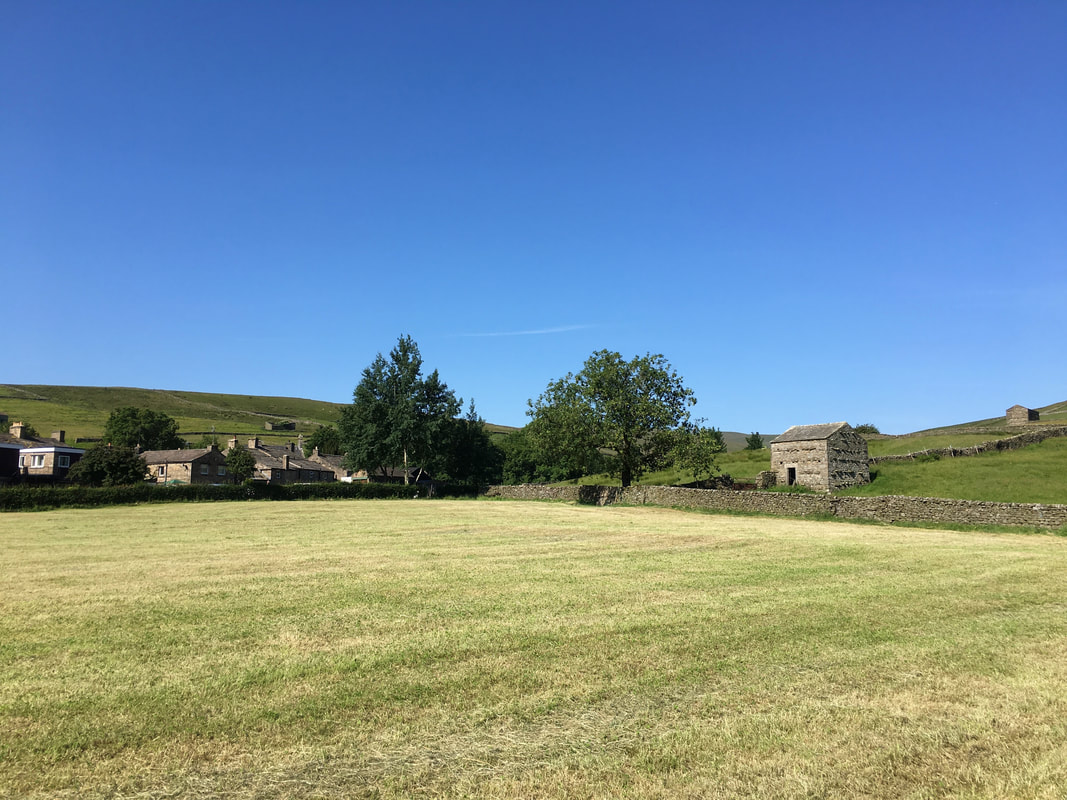 Looking back to Thwaite

A panorama from Thwaite looking to Kisdon Hill.  Our path goes to the left with the Pennine Way over to the right 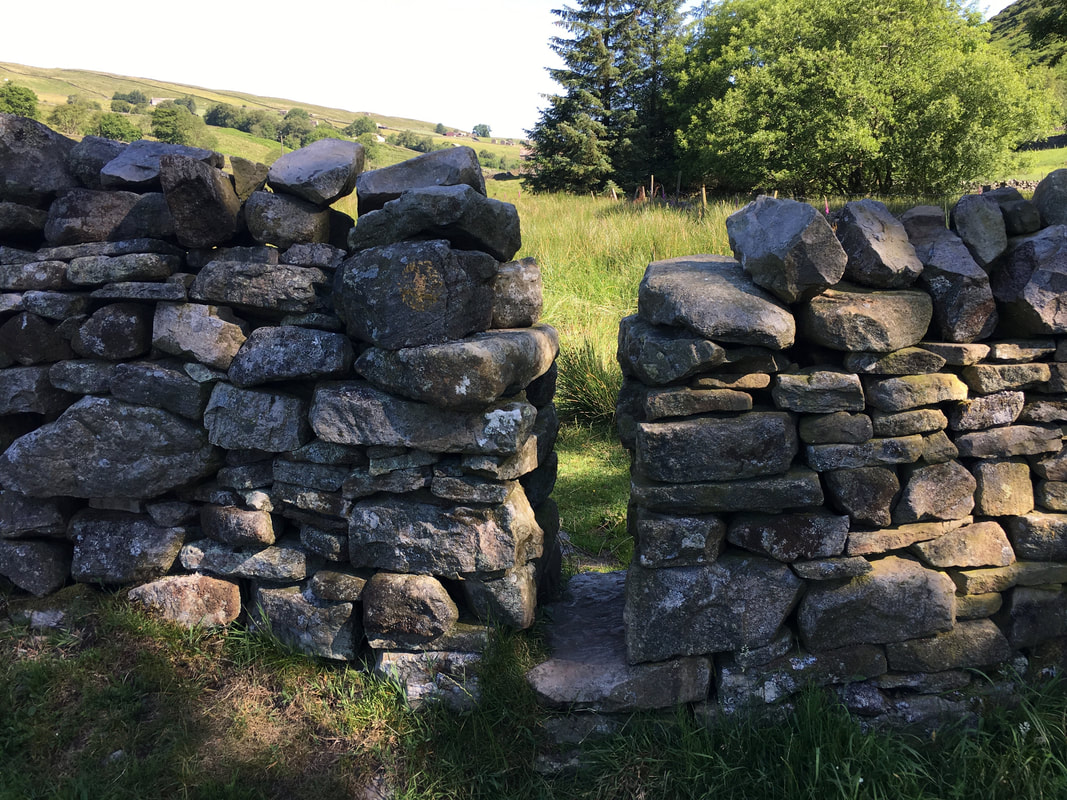 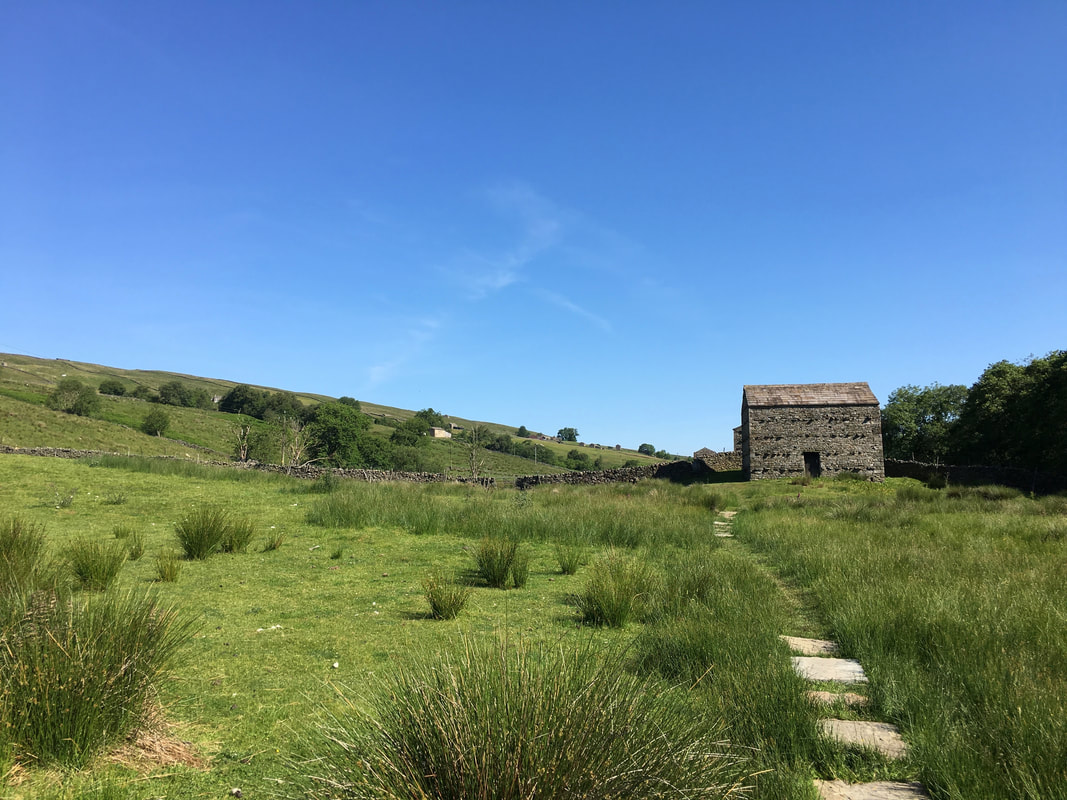 This part of the walk was curiously called Dirty Piece.
​The flags were laid by the Yorkshire Dales Rangers in 2017 as this section used to be extremely boggy. 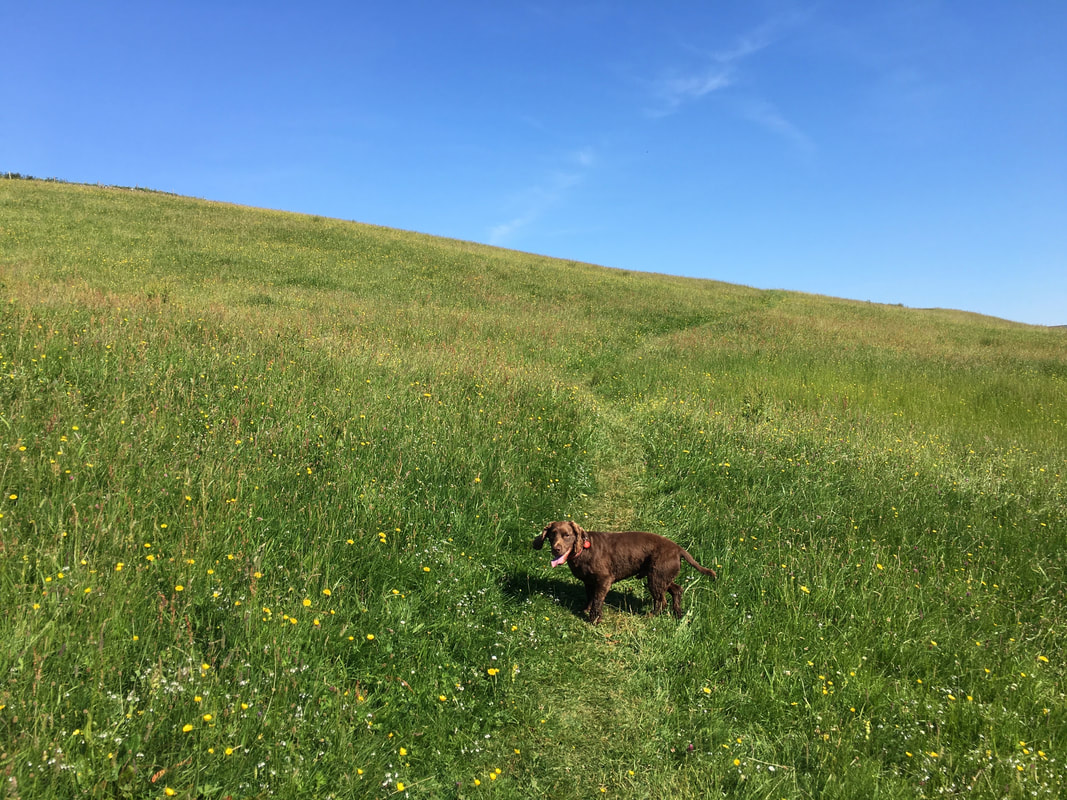 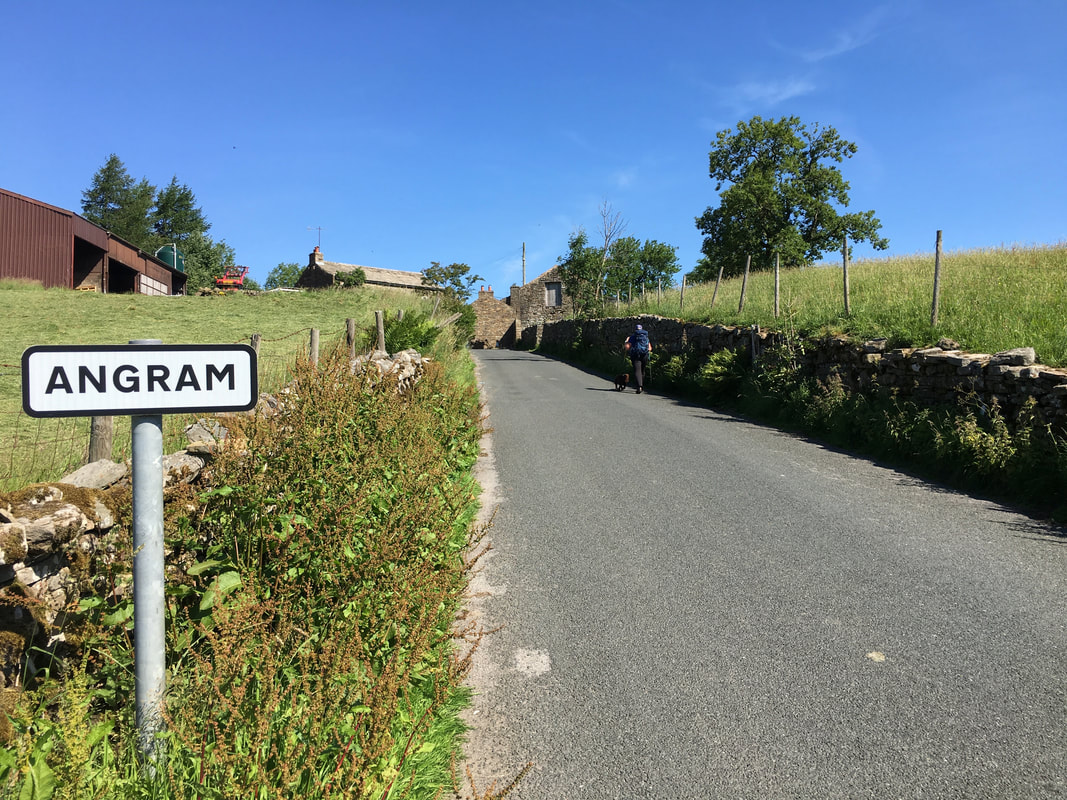 Almost back now as we enter Angram, which translates as "grazing land" in Old English 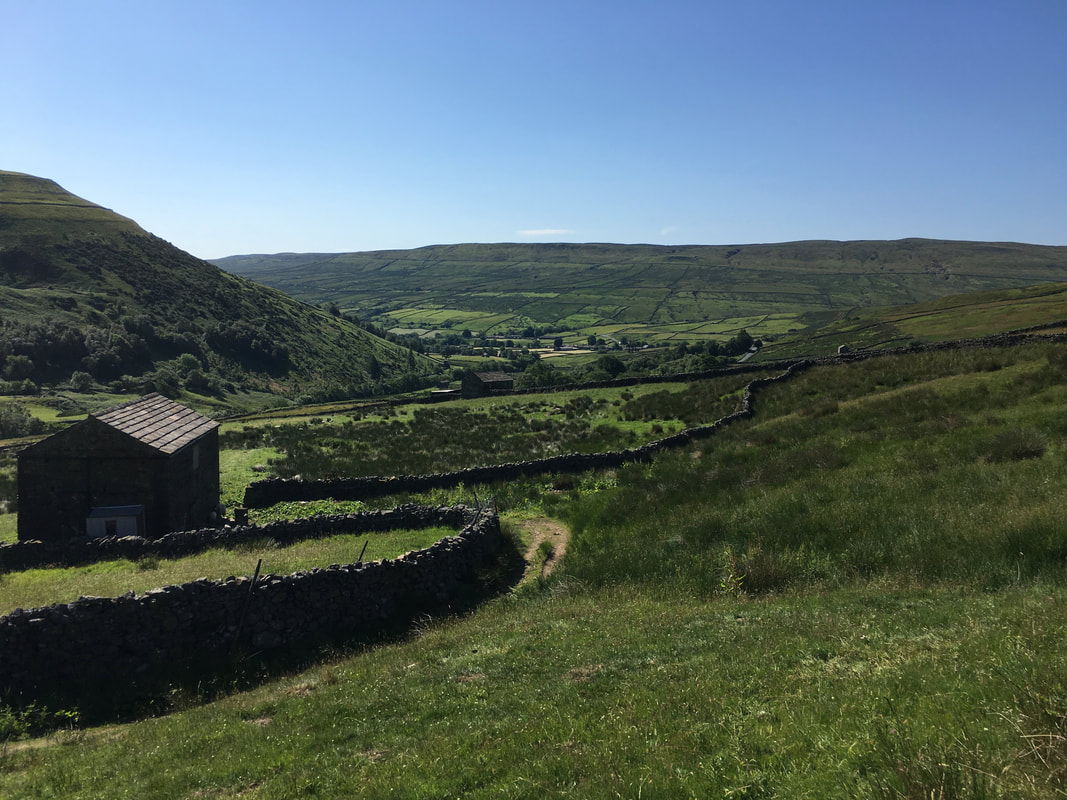