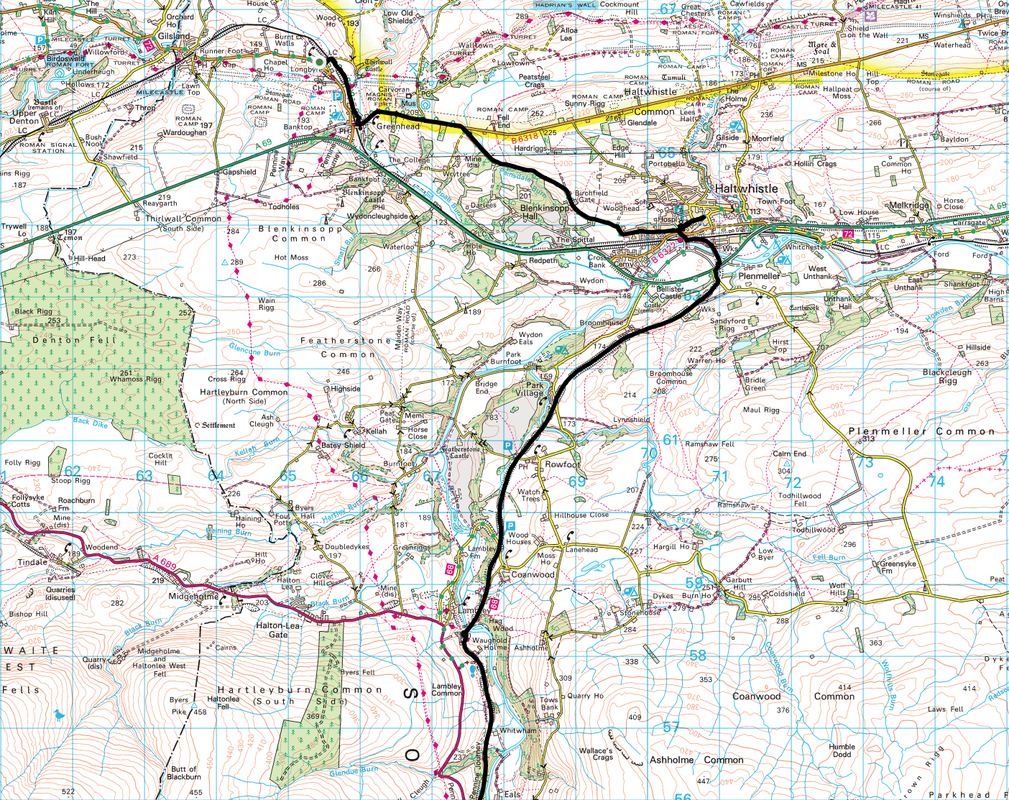 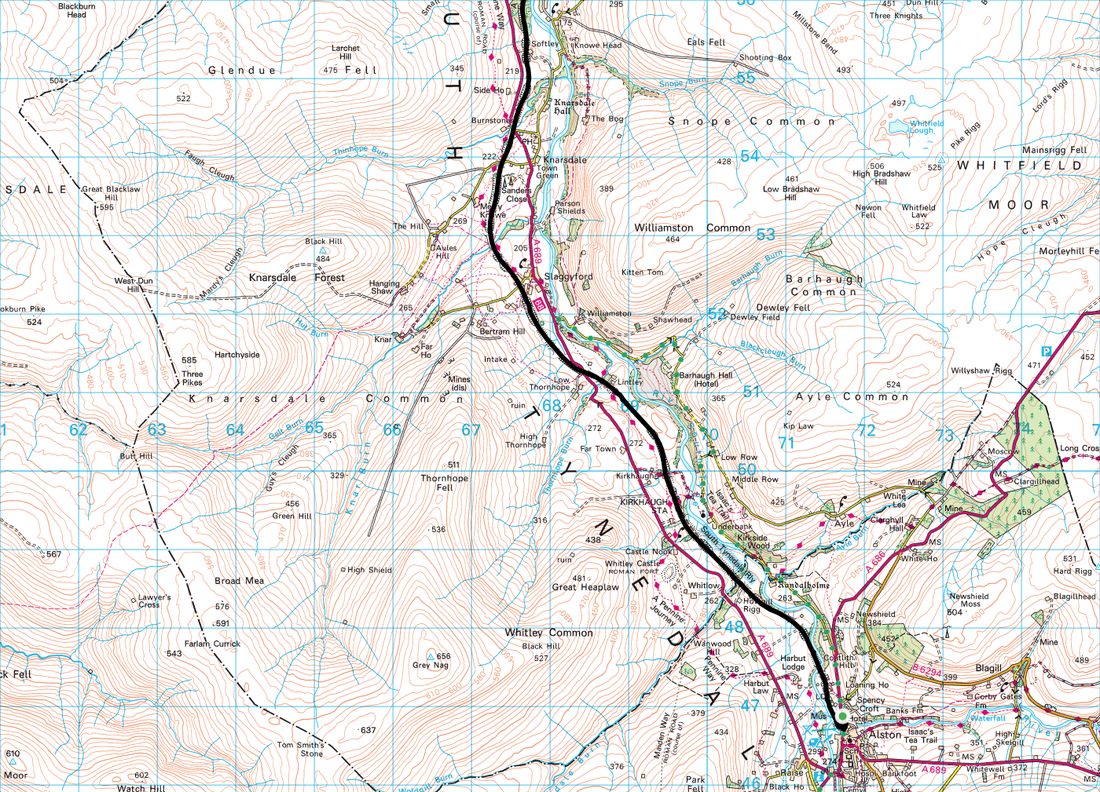 Fudge was much better this morning therefore it was full steam ahead for an 18 mile jaunt over to Greenhead. We had decided yesterday to amend the route therefore would follow the way of the South Tyne Trail - a flat walk alongside the railway as far as Haltwhistle from where we would walk along quiet roads to Greenhead. We had decided on this route to keep the walk as flat as possible and close to villages just in case we had to abort the walk. We would jump in and out of the Pennine Way but would be mainly on the South Tyne Trail today. Therefore with an overcast start we headed down to Alston Station to join the Trail.

Making our way along the trail out of Alston the sun came out and would remain with us as far as Lambley. It would be easy to look at our amended route and think it would be a boring flat trudge along an old railway line but this was far from the truth. The path was level, solid and there were great views in all directions - plus we were making progress towards Greenhead which was a long way distant. 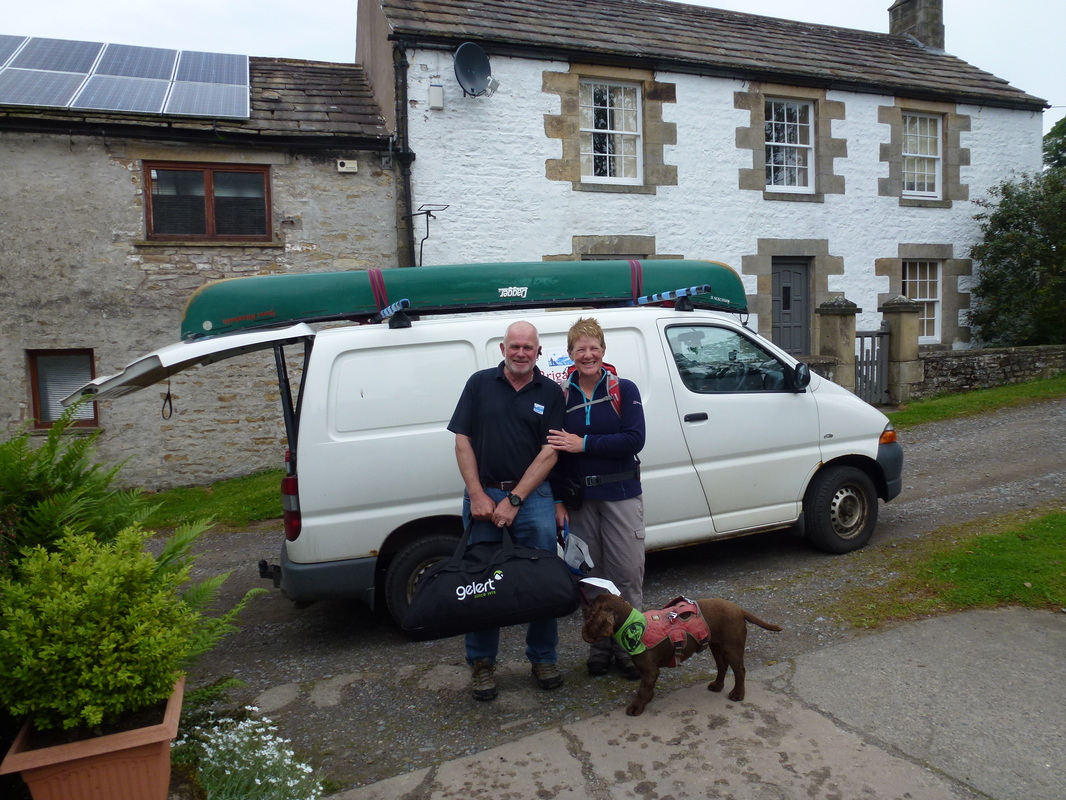 Groundhog Day for Bob, our flexible Brigantes Baggage Transfer bloke.  ​Fudge is clearly back on the mend as he sniffs the bag containing his food 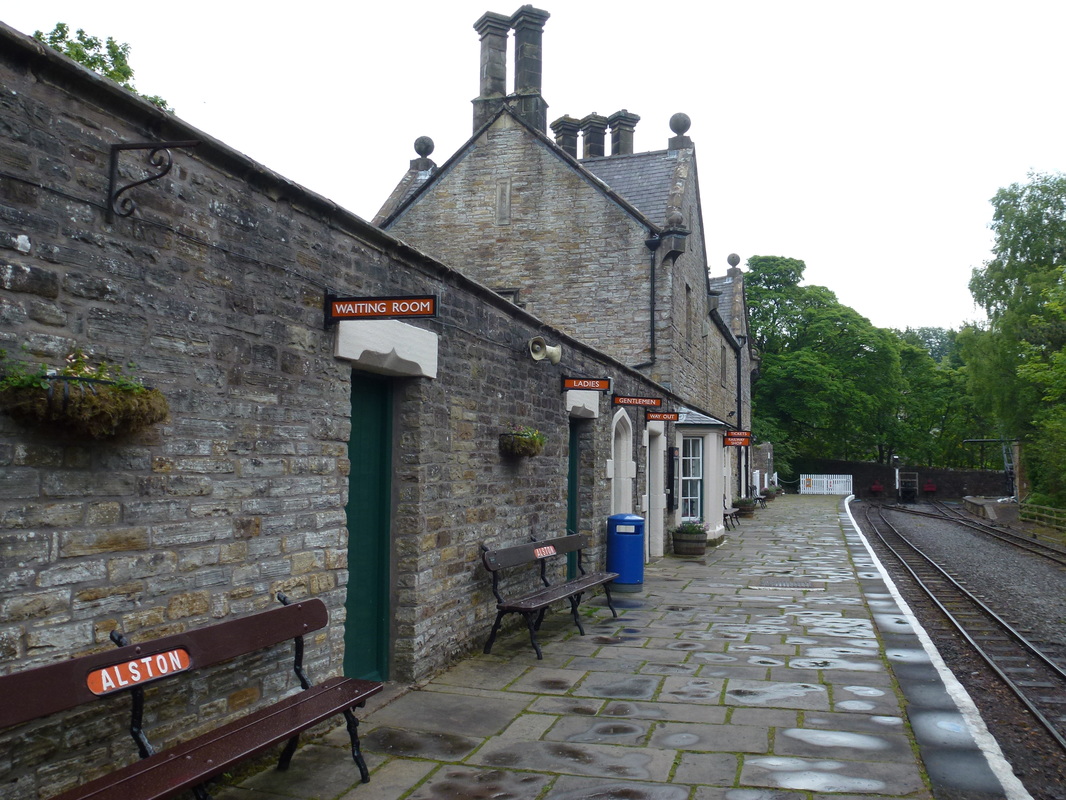 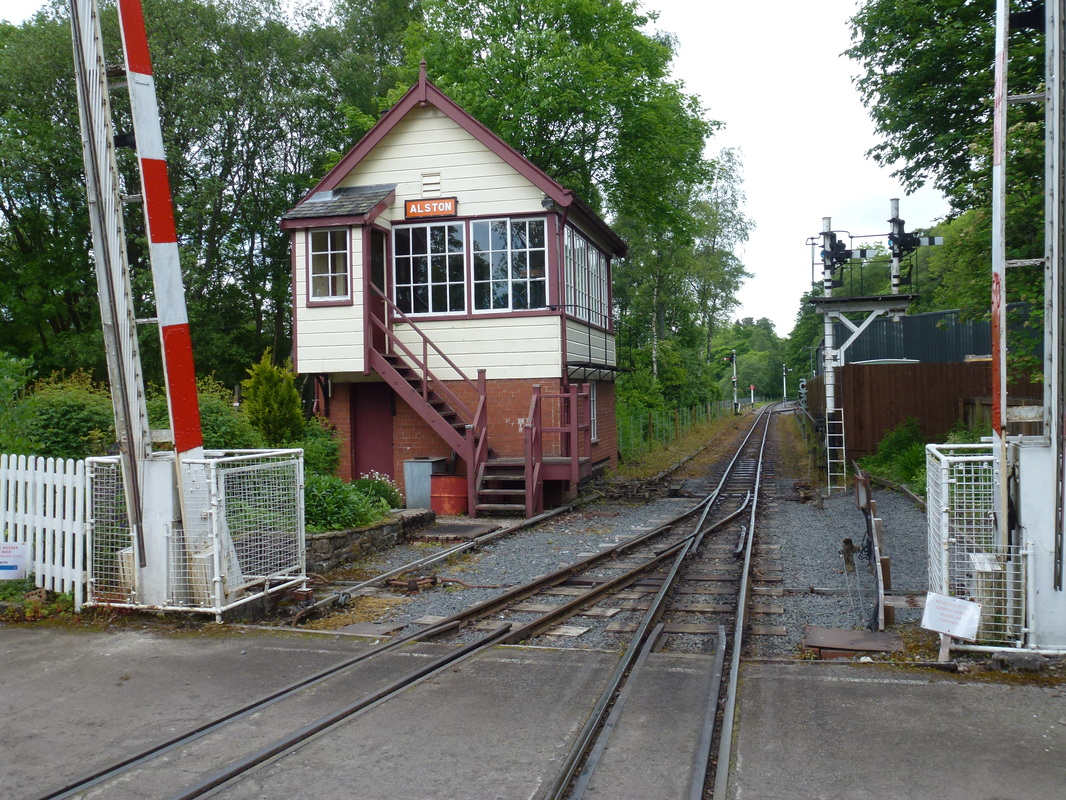 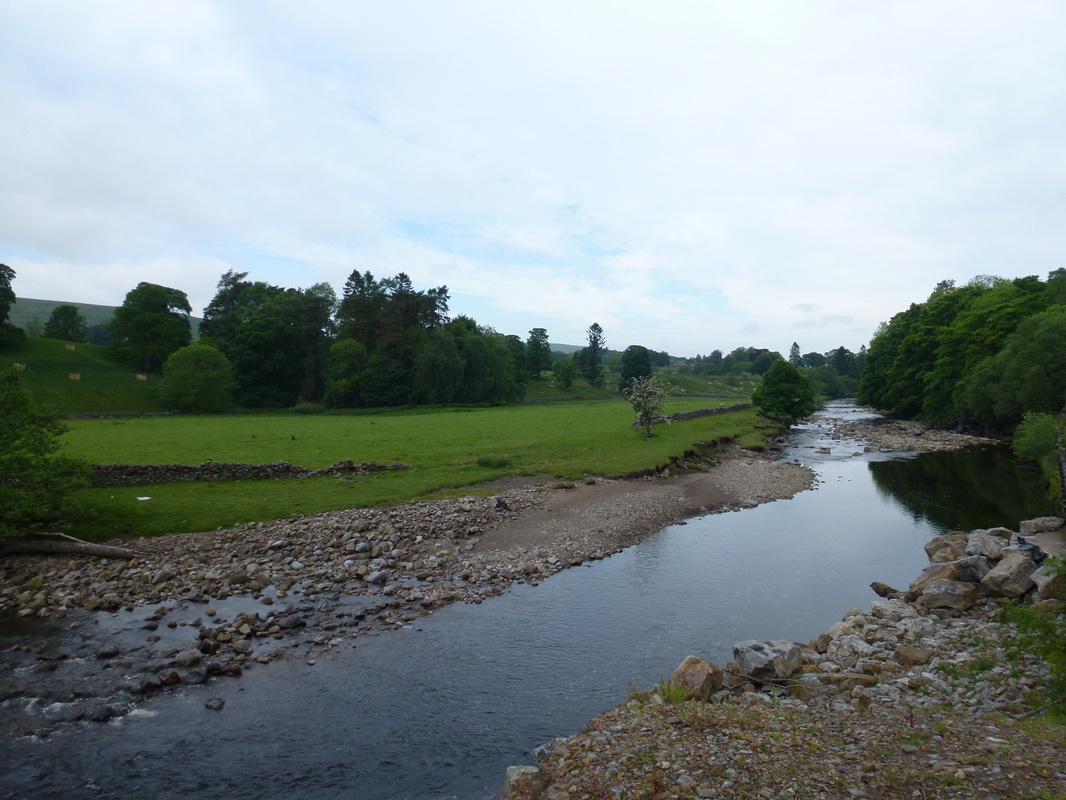 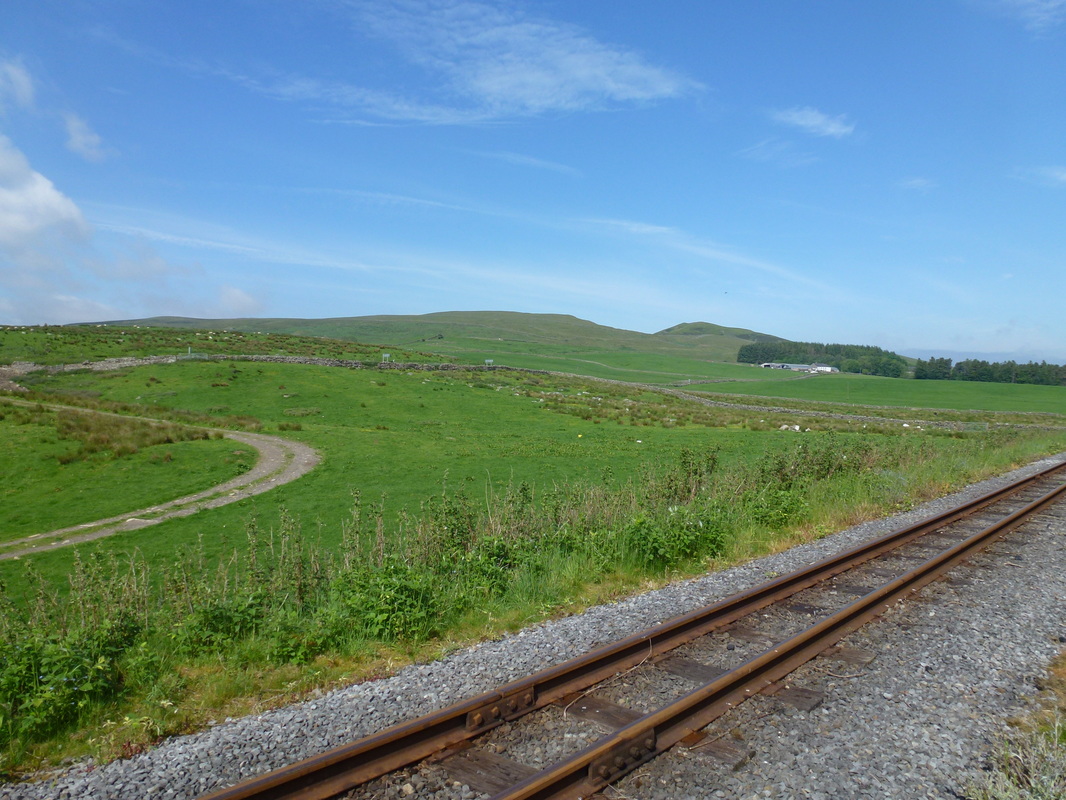 It was turning into a lovely day today as we left Alston
We soon arrived at Kirkhaugh Station - bang in the middle of nowhere and it was nice to see that despite the infrequency of the train service that each of the stations we visited today were very well cared for. We were now running parallel with the Pennine Way and just after another station, Lintley Halt we passed over it as our path made its way over a viaduct and on to the village of Slaggyford. The South Tyne Trial kept to the left hand side of the village and it was here that Fudge said hello to Alfie, a beautiful black Cocker Spaniel who had come out to meet us - we had a quick chat with his owner before heading off to Knarsdale. 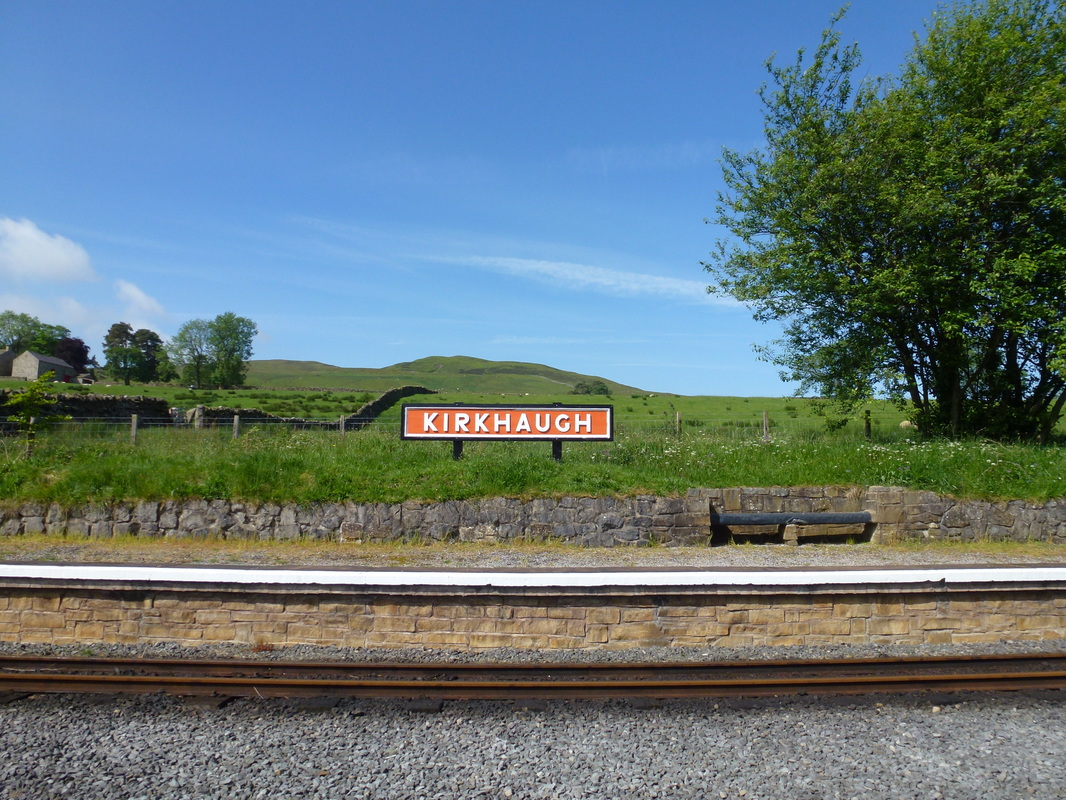 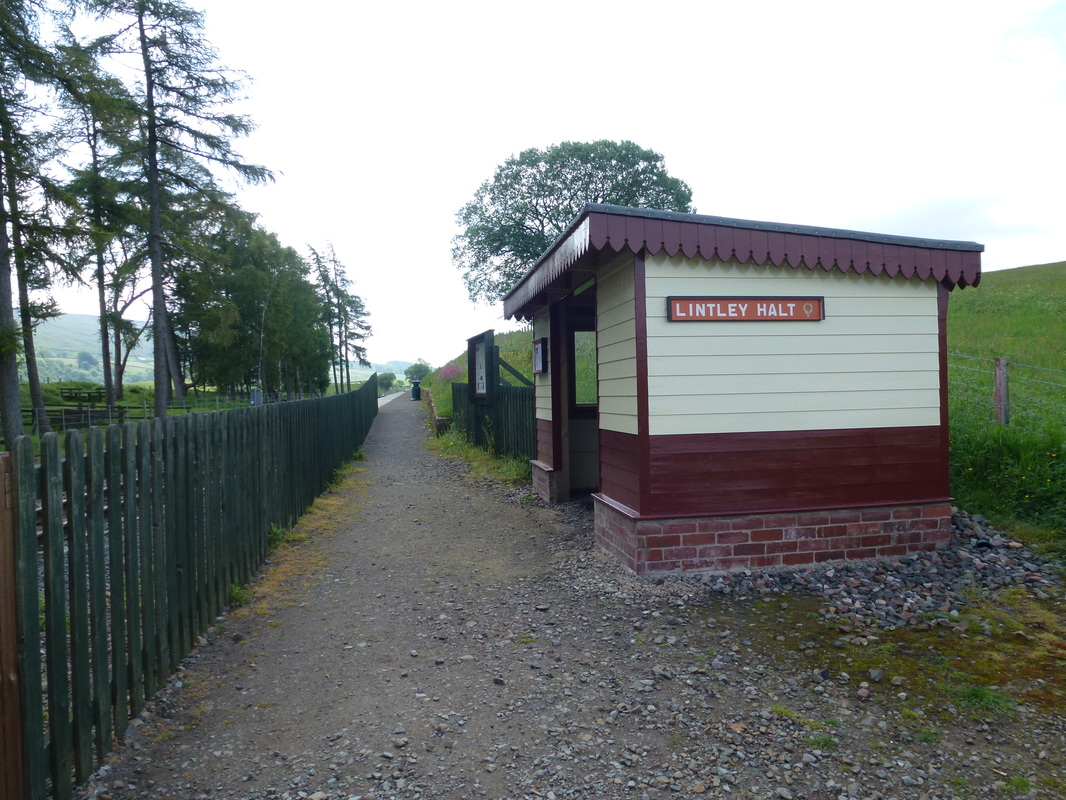 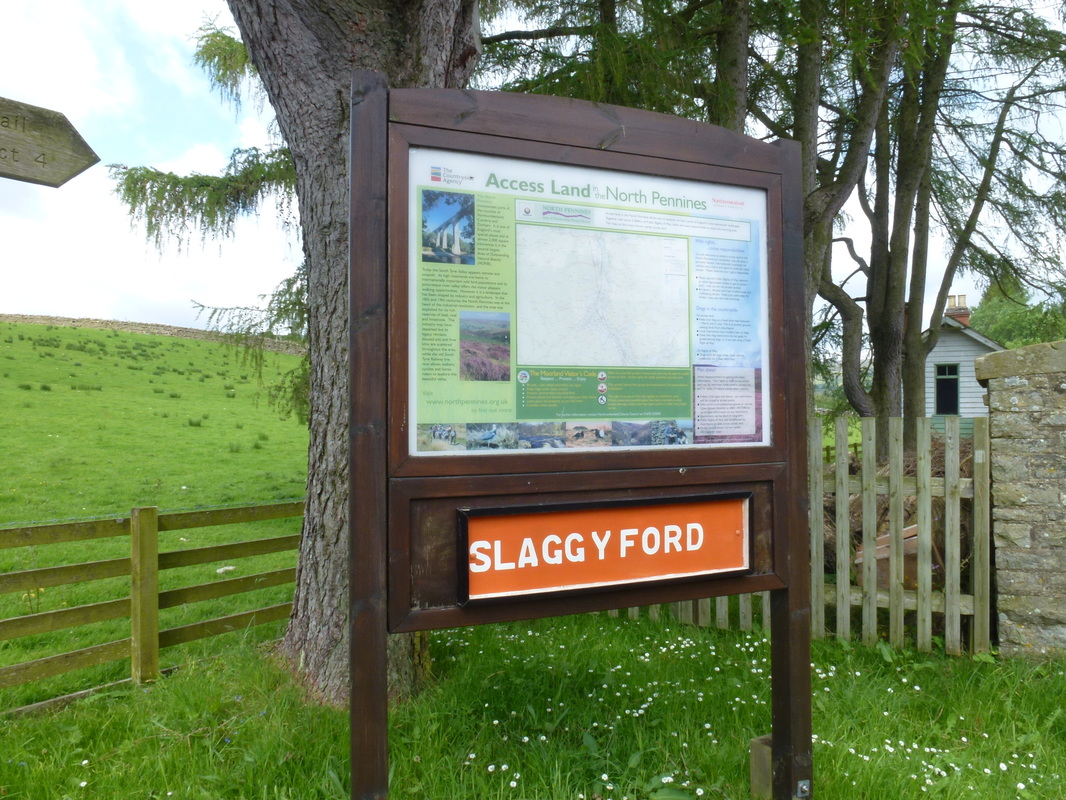 Unfortunately named but a lovely village 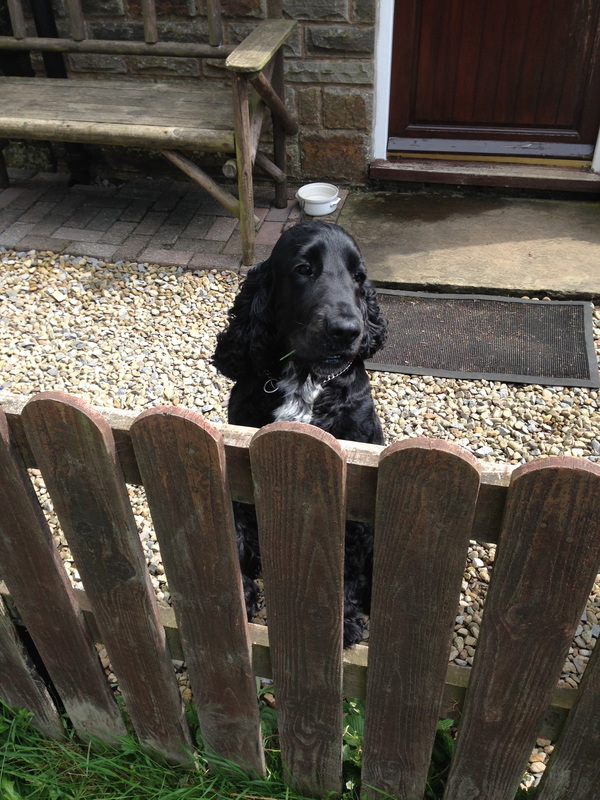 Alfie
The South Tyne Trail crossed a viaduct at Knarsdale then headed north to reach another viaduct at Lambley. The route then stopped abruptly at a private house to drop down steeply below the arches before climbing out again to reach an access gate on to the viaduct itself where the views over the South Tyne river were glorious.​ 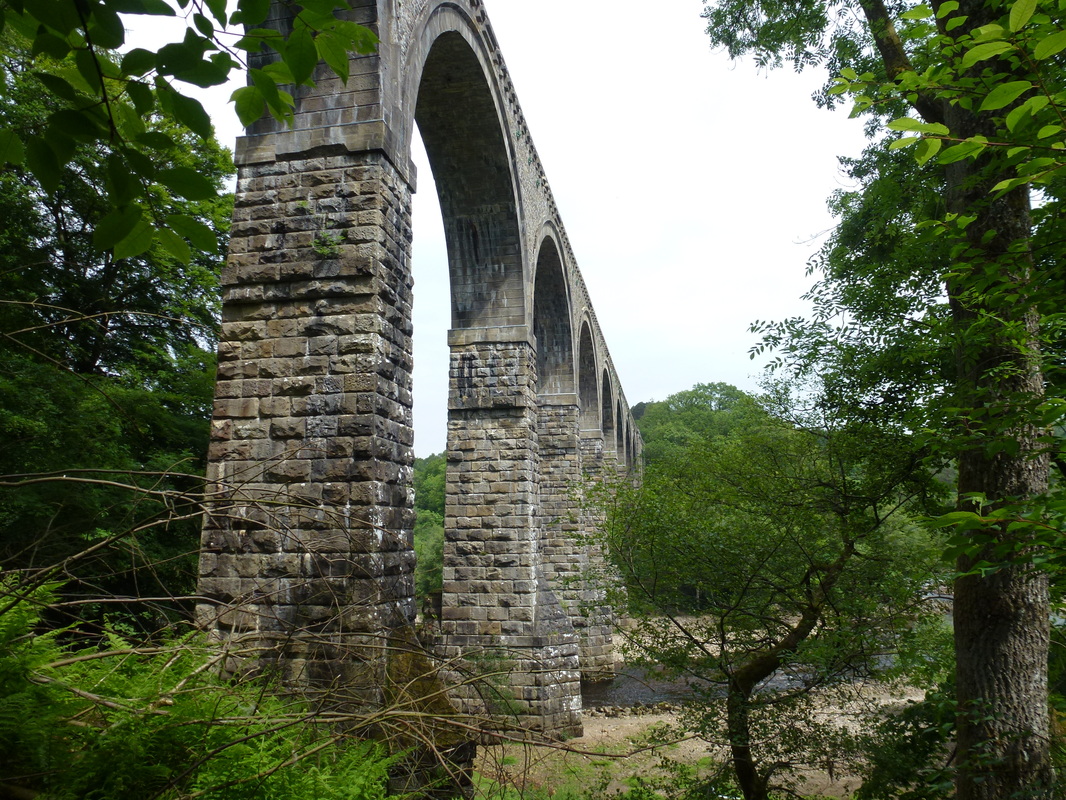 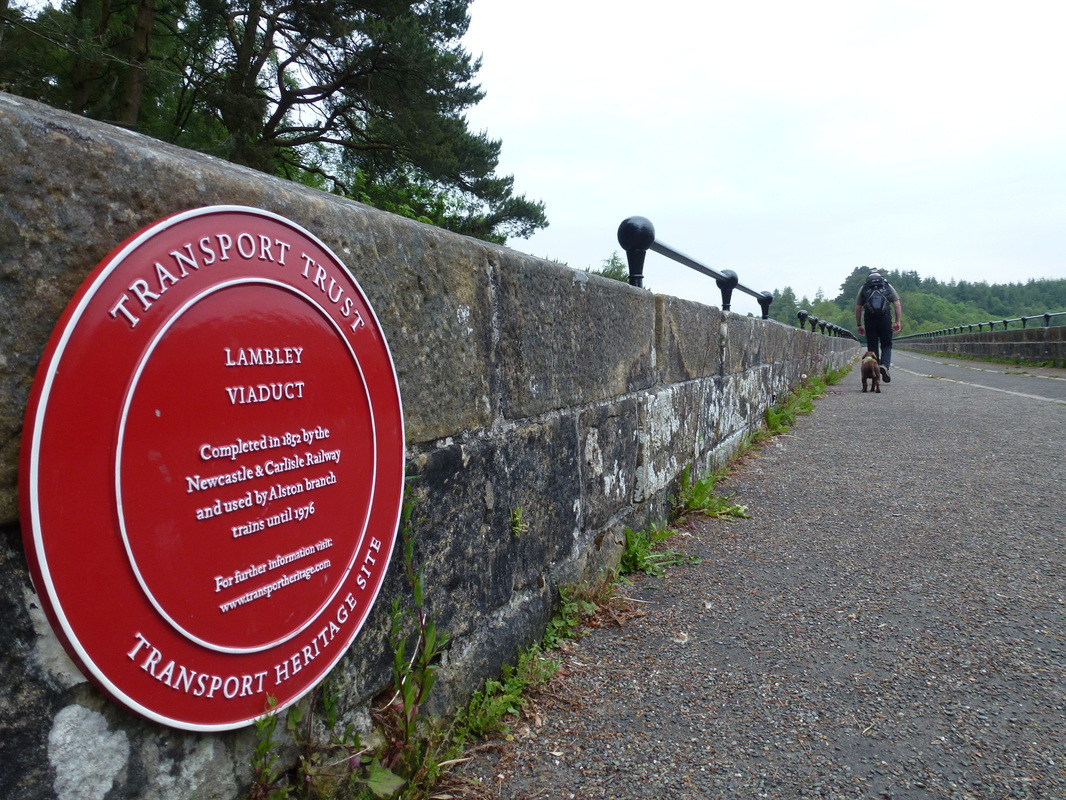 A steep path leads to the top of the Lambley Viaduct 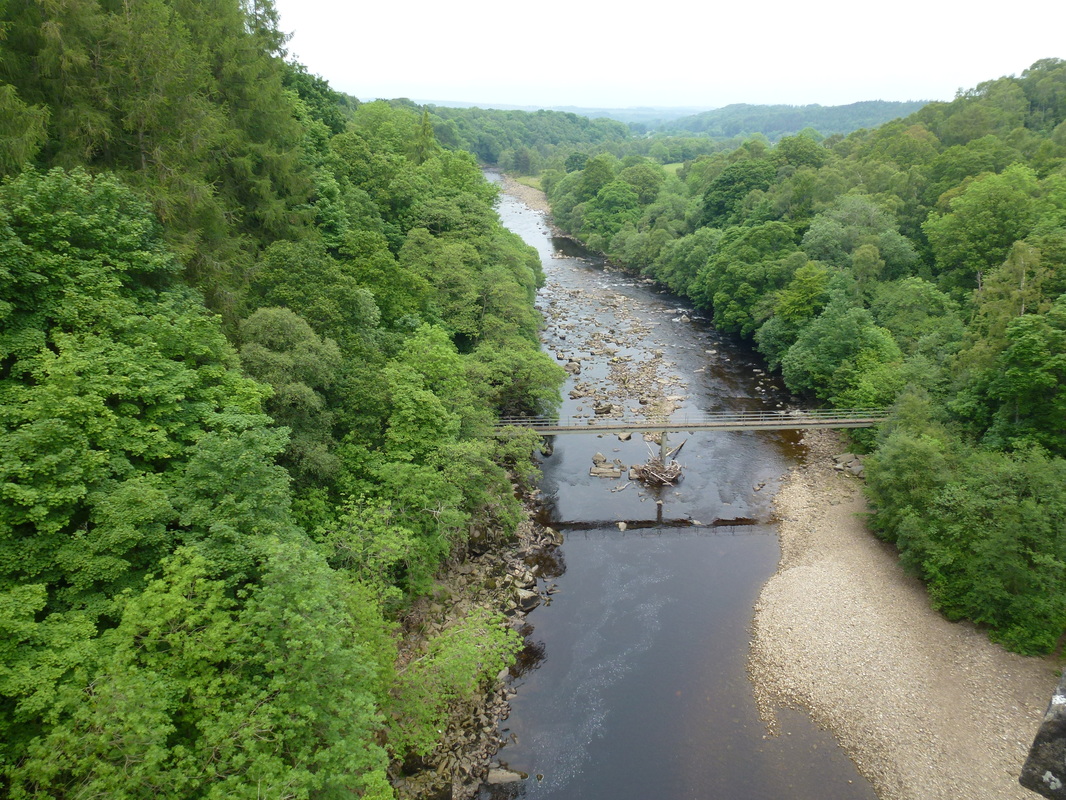 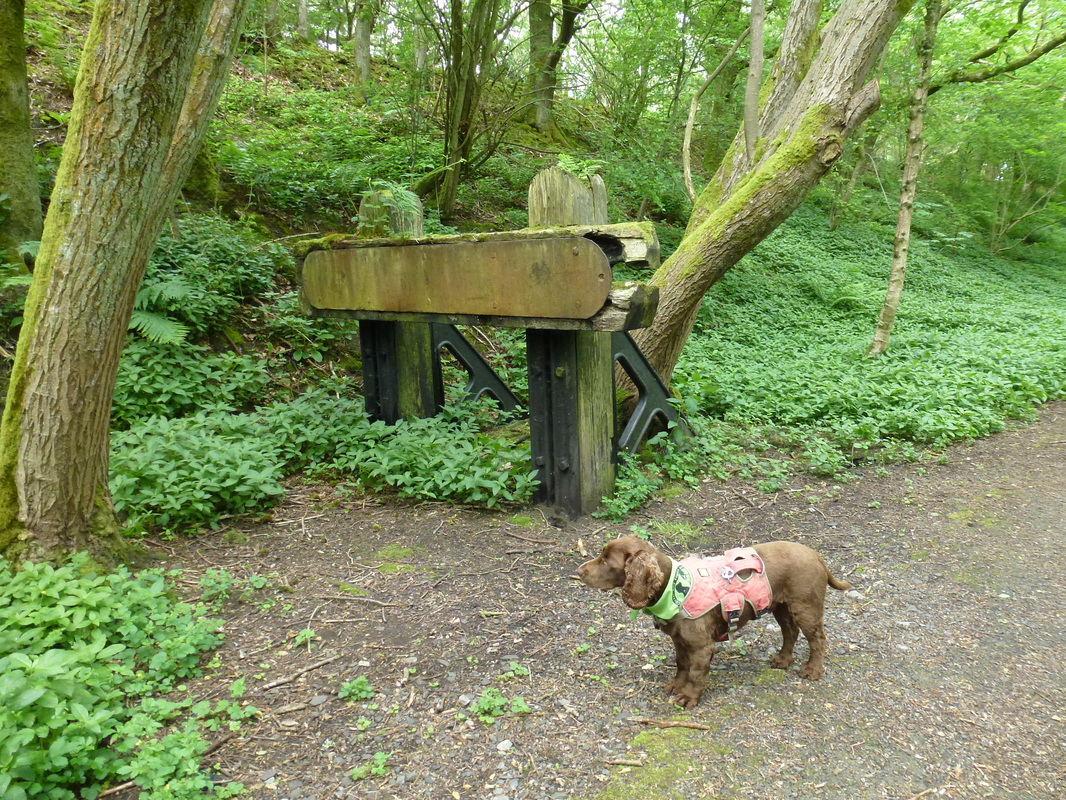 One of the old railway buffers on the South Tyne Railway path
We now had about 3 miles to go before we reached Haltwhistle and we continued to enjoy the views and varied landscape from the path before eventually reaching the noisy outskirts of Haltwhistle to cross the busy A69. As we had made good time we walked the short distance into Haltwhistle - it was like a ghost town with absolutely nobody about - it felt like a Sunday here. Undeterred we had a quick bite to eat at a picnic table in the park and before too long we began to see signs of life.​ 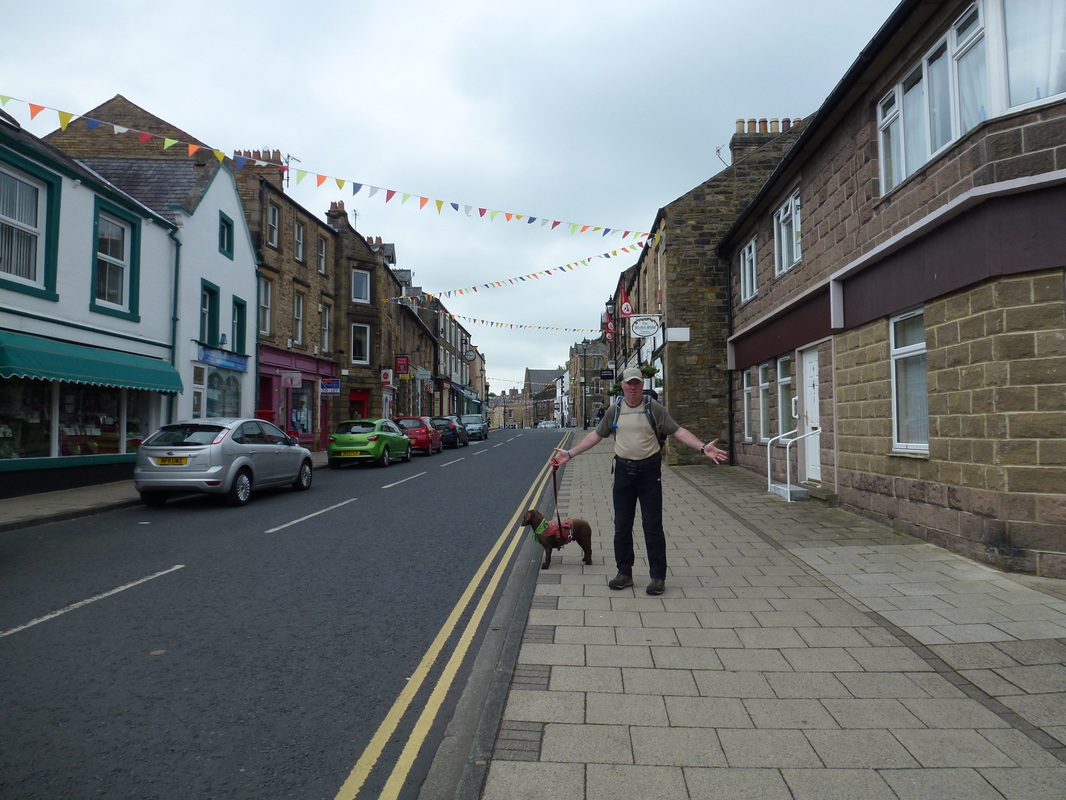 Haltwhistle - where is everyone?  Fudge takes another opportunity to practice his Green Cross Code 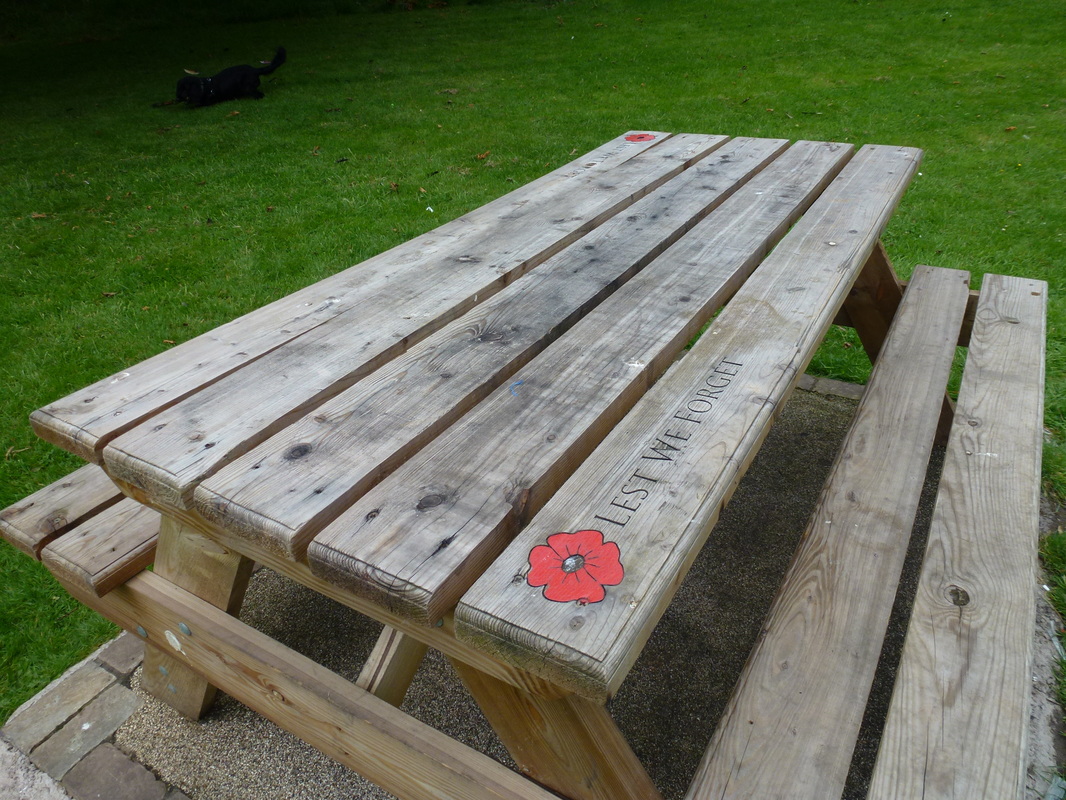 A nice touch at Haltwhistle 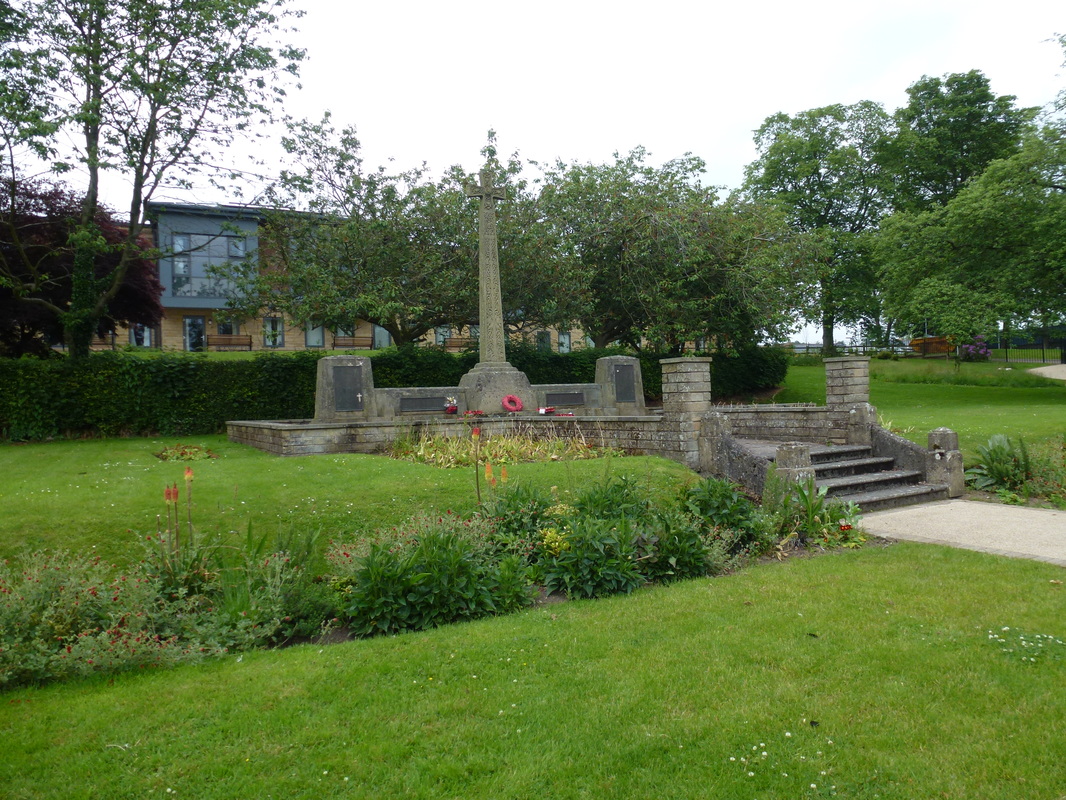 The War Memorial in Haltwhistle
Suitably refreshed it was now a question of heading to Greenhead via the south west of Haltwhistle and it was a pleasant enough journey along quiet roads and before too long we reached the B6318 which took us into the village. The Old Forge Tea Rooms were open therefore unable to walk past a tea shop opportunity we stopped for some tea and cake before taking a pleasant path to the hamlet of Longbyre and our digs for the night at Four Wynds Guest House.​ 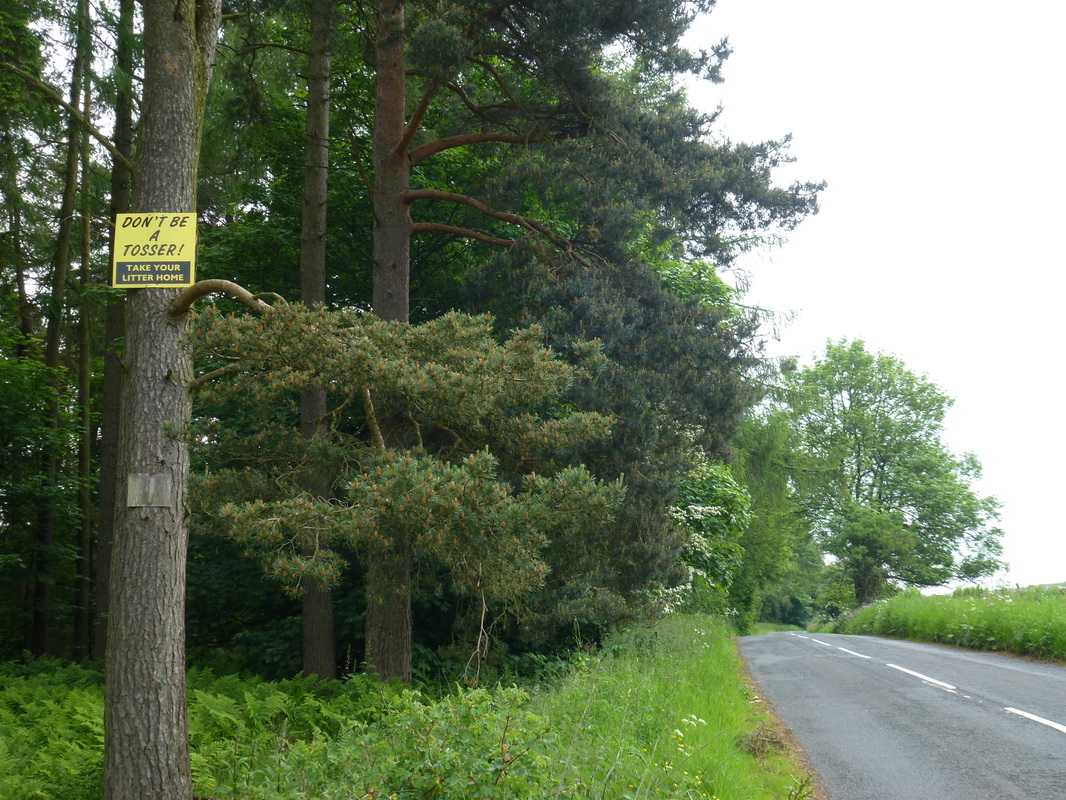 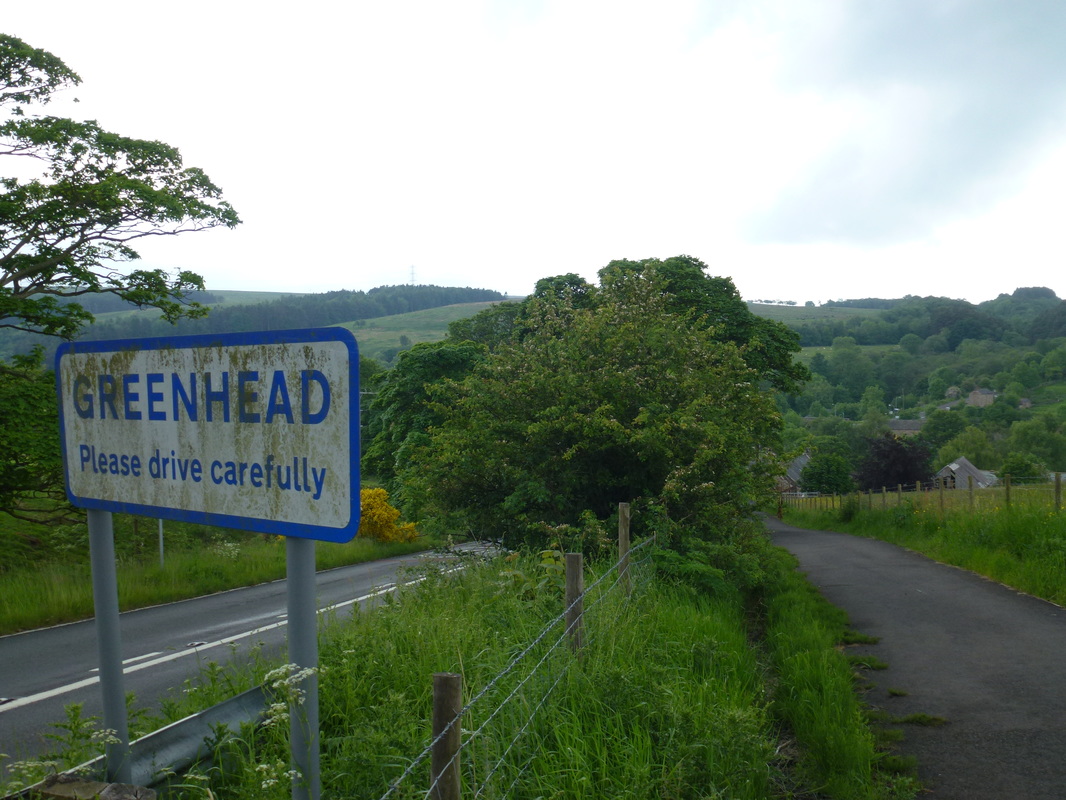 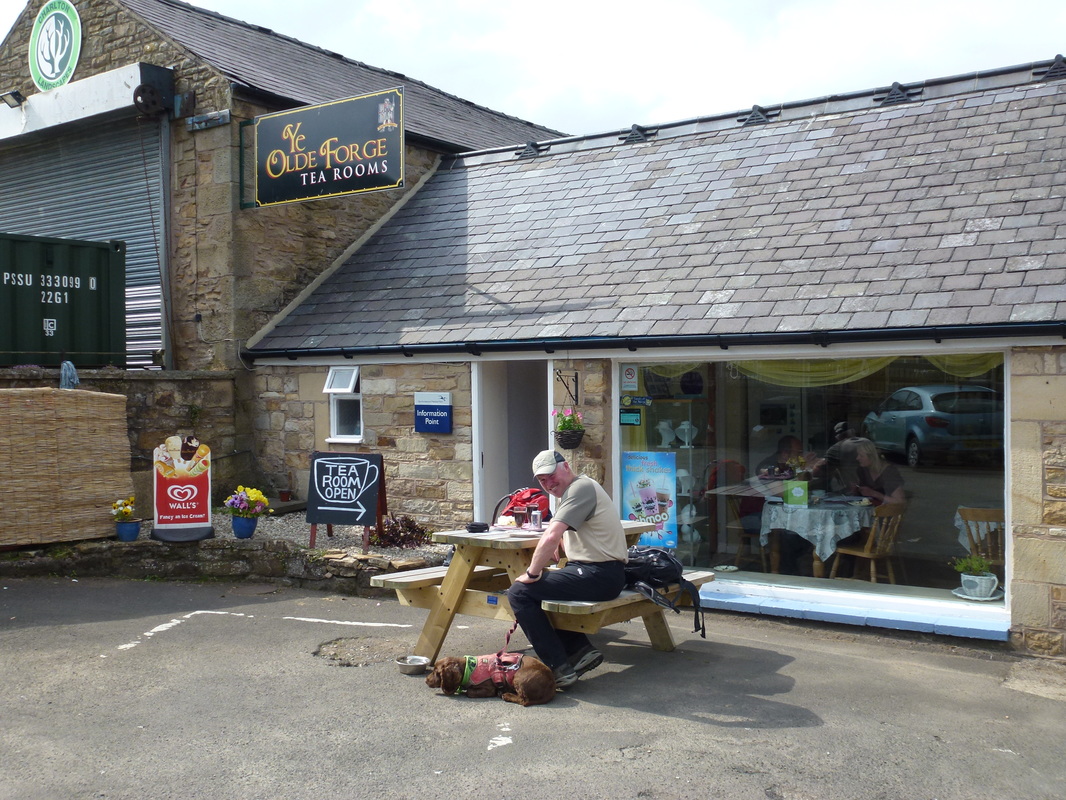 Well - as you do!  Fudge has the hump because he cannot have any more cream
Four Wynds was run by Nigel and his wife Catherine and they offer pleasant accommodation and also guided tours of Hadrian’s Wall plus a roam and stay policy that enables people to plan their trips to this historic area without the need to keep moving accommodation. After settling in and a quick shower Nigel very kindly took us over to The Samson Inn at Gilsland for our evening meal. We got chatting to two young Belgian girls and two American ladies who were walking part of Hadrian’s Wall and we spent a convivial evening before Nigel picked us up and took us back to Four Wynds.

Despite having to change our plans, today was a varied and enjoyable walk and we are really looking forward to the next couple of days walking along Hadrian’s Wall.​
Overnight Accommodation 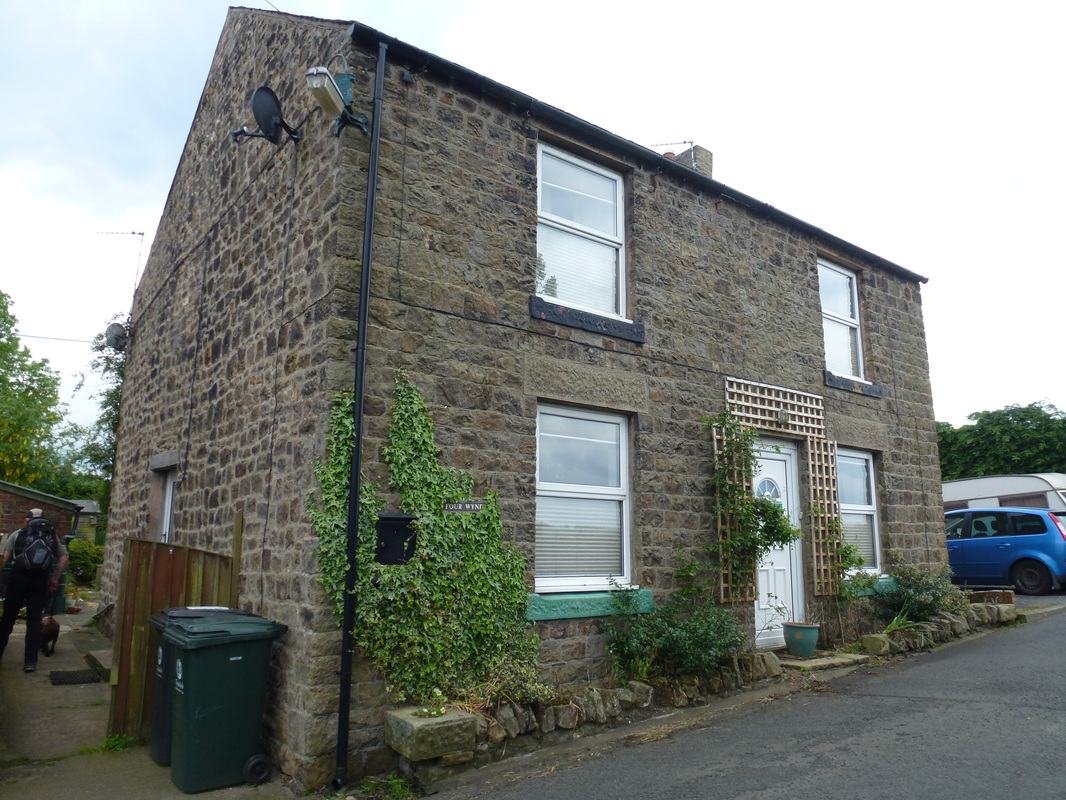