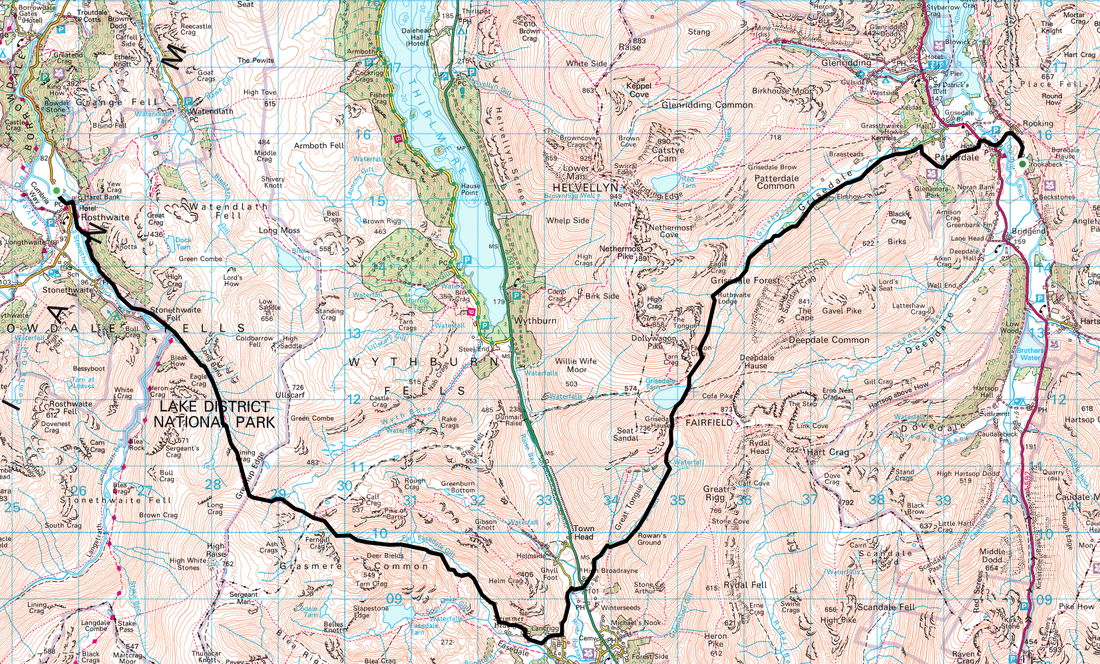 We awoke to a dry and overcast sky, which hopefully would stay that way without the accompanying rain as we were going high over Lining Crag, Greenup Edge and Grisedale Tarn today. Breakfast was busy with 3 other couples staying at Yew Craggs – Philippa and David, Mark and Irene and Ian and Kim. There then followed lots of C2C talk and only Ian and Kim were to accompany us to Patterdale as the others were stopping in Grasmere.

Our stay at Yew Craggs served its purpose, the room was nice and Lucy sorted out our drying for us and we left having had a good breakfast. Armed with a packed lunch, we left the B&B at 0830 and made our way to Stonethwaite to begin the ascent of Lining Crag passing to the left of Eagle Crag. This stretch of the walk is fairly tough but with lots of interest and waterfalls to take your mind off the climb.​ 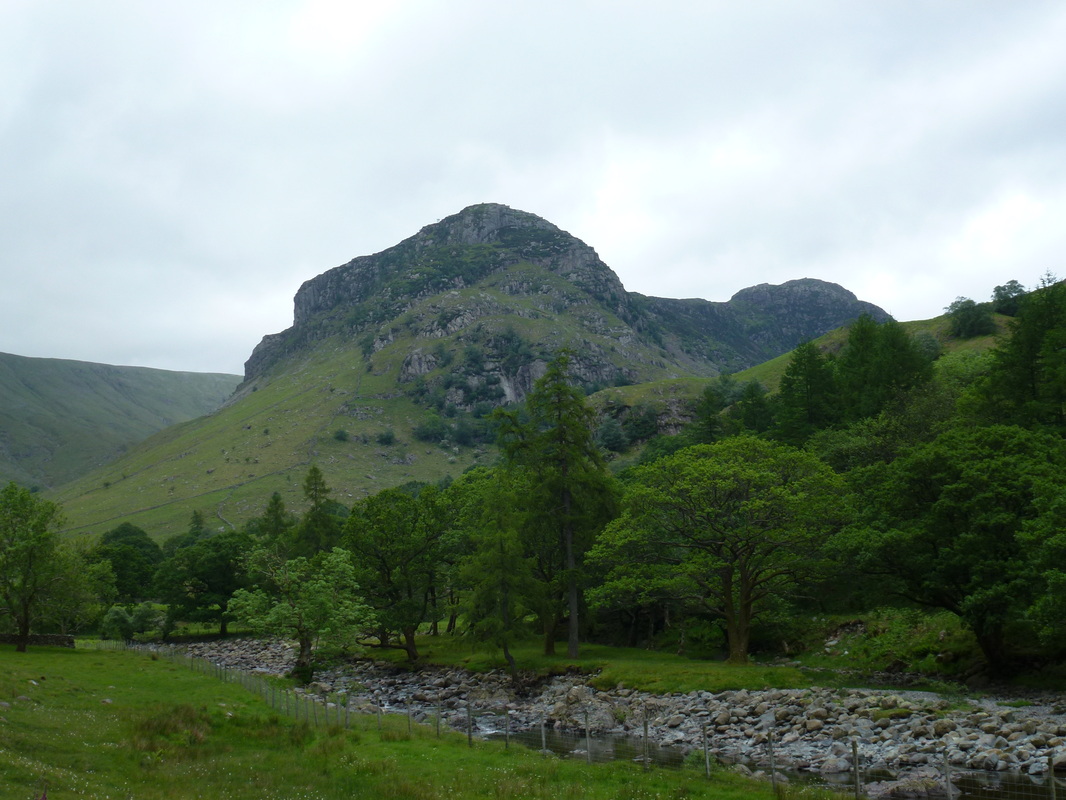 Eagle Crag and Sergeant's Crag
It was whilst ascending the last 100ft of Lining Crag that we had a rather strange and thankfully rare experience. Normally when walkers pass each other on the hill, those going up wait for those coming down and certainly in our case say hello. This we did for a gentleman in his mid fifties and as he passed us we said hello – twice! He passed us without a sound and carried on.  He then turned around when we said hello for the third time. Then came the most surreal and bizarre conversation either of us has ever experienced – he said and I quote “Yesterday I was about 3 feet away from a Deer and it was all quiet”!! What do you say to that except that it is basic manners amongst people to be civil to one another? Maybe his personality and manners were waiting for him in Rosthwaite. Thankfully, walkers like him are few and far between.​ 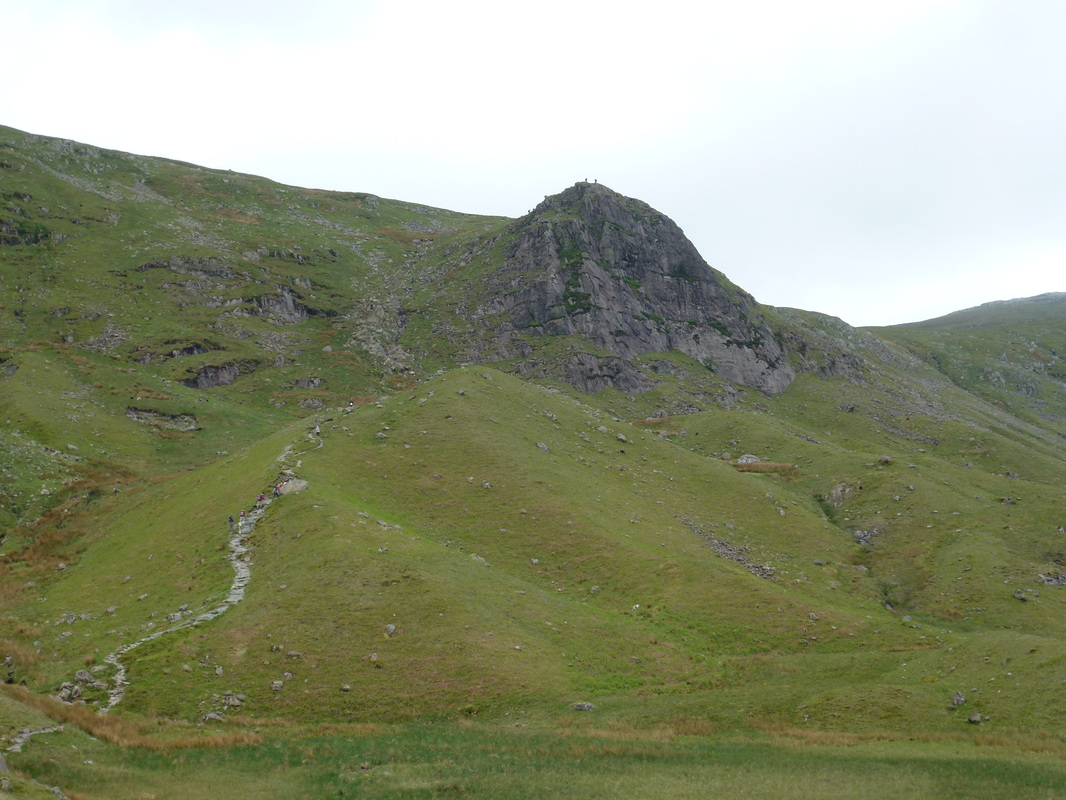 Lining Crag
On reaching Lining Crag we caught up with Billy and Eileen and The Four Porn Stars and we had a quick bit of banter and went on our way. Moving on we then had to be careful navigating over to Greenup Edge and beyond as the path was intermittent and there are areas where you can go wrong, however in following Stedman and the GPS we were fine. Just after Greenup Edge is the opportunity to enjoy the fine ridge walk over Gibson Knott and Helm Crag but we stayed low and made our way down the valley of Far Easedale which is just as delightful but a long way. Just before Grasmere we were passed by a friendly group of walkers who we later christened “The Bankers” – this is not a derogatory term or rhyming slang, it was simply because they seemed to be sponsored by a bank and their clothing supported this theory. ​ 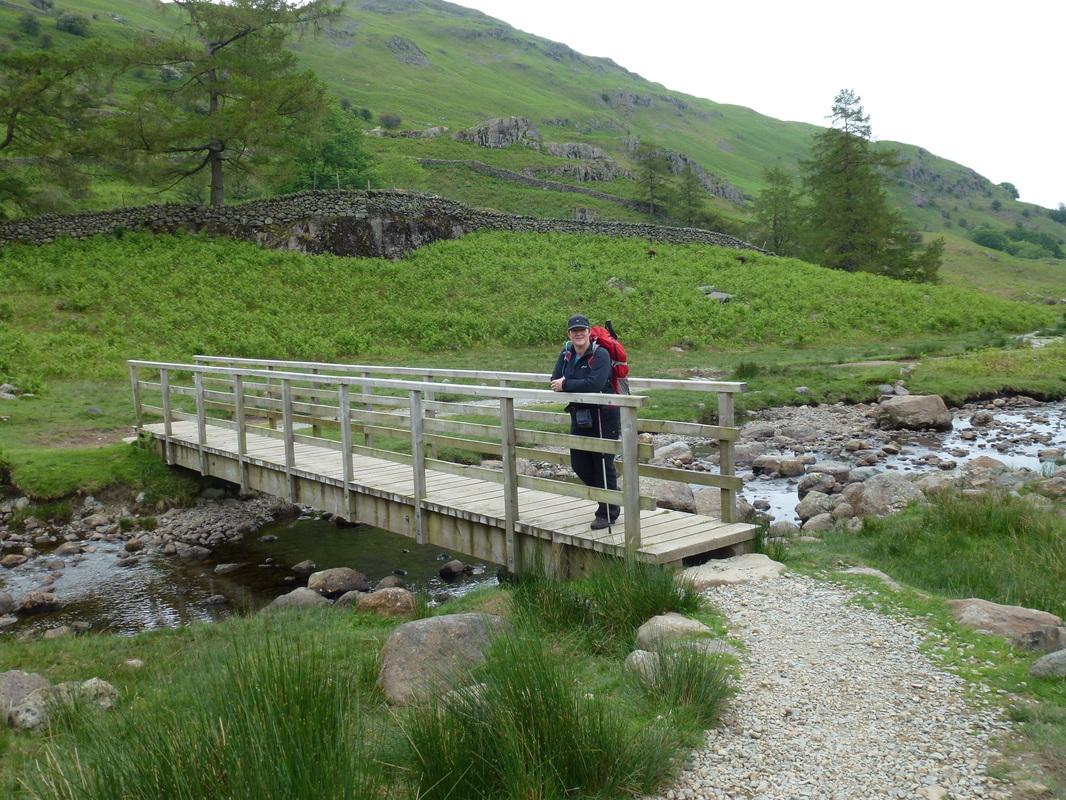 Stythwaite Steps, Far Easedale
Reaching Grasmere at 1245 we avoided the temptation of the myriad of teashops and skirted the village passing Thorney How (which we later found out had a tea shop) and just after this we saw Steve and Jordan who were sorting out some personal admin on Steve’s mobile. Just as we were about to cross the A591 we passed The Bankers whose support vehicle was supplying refreshments and extra people. We later found out that they were a large group of work colleagues who were swapping about supporting the two main C2C walkers who we christened “Ginge” and “White Legs”.

By this time we felt we had already walked a long way what with the ups and downs we had encountered but we were really only half way. The next stage through the Grisedale Valley is long and laborious, even without the temptation of going over Helvellyn or St Sunday Crag. Reaching the small reservoir at the start of Great Tongue, we opted to go right along Tongue Gill and we reached Grisedale Hause where the conditions changed and it became very cold and blustery. Grisedale Tarn was busy with walkers from Helvellyn and St Sunday and we therefore cracked on, pausing briefly to take a picture of the Brother’s Parting Stone. At this point we were passed by a group of mountain bikers who were making their way down the valley – hats off to them but as mountain bikers ourselves you would not catch either of us risking life and limb like they did.​ 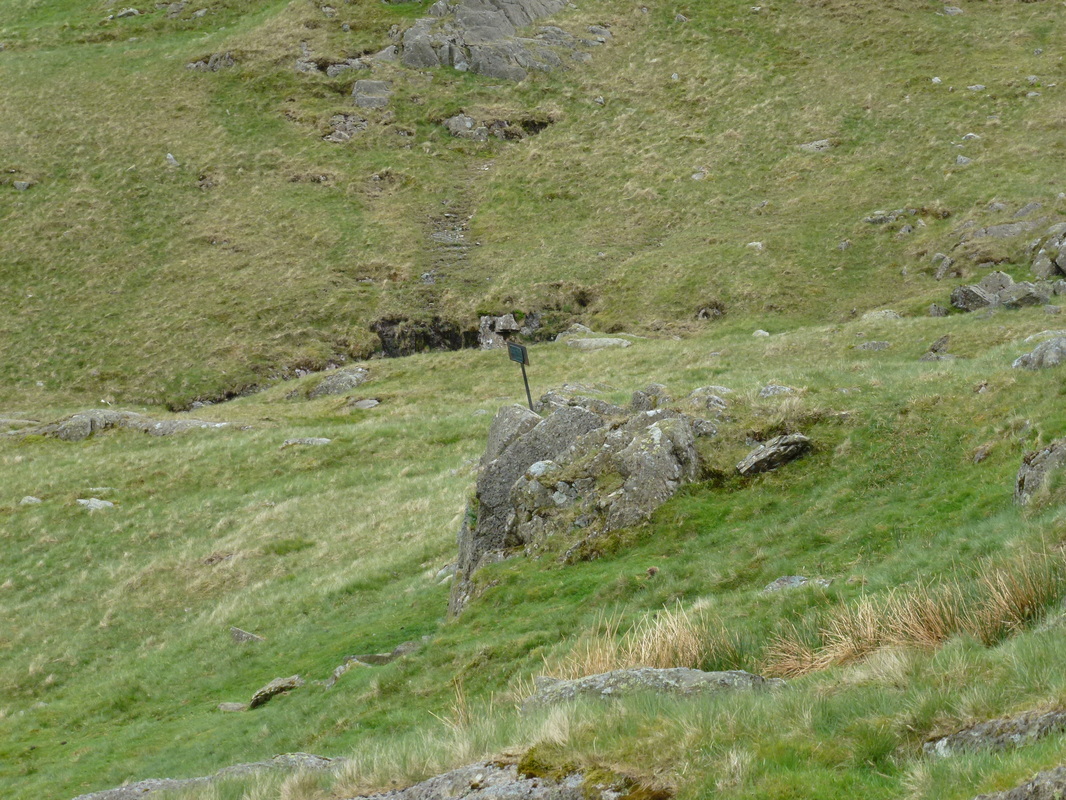 The Brother's Parting Stone
Passing Ruthwaite Lodge our feet by now were pretty sore – not from blisters but from the sheer pounding they were taking and the length of the walk today. The last few miles were hard work. Just before reaching the valley bottom a gentleman and possibly his daughter were peering into a grassy area about 10 feet away. They asked us if we knew anything about “Birds” – Dave replied, “I do but not that kind”. The daughter tittered and said “Oh very good” in a somewhat feminist tone. For all she knew Dave could have been an expert in Chickens!! We then reached the barn where Wainwright famously slept overnight and could not resist taking a photograph to mark the occasion.​ 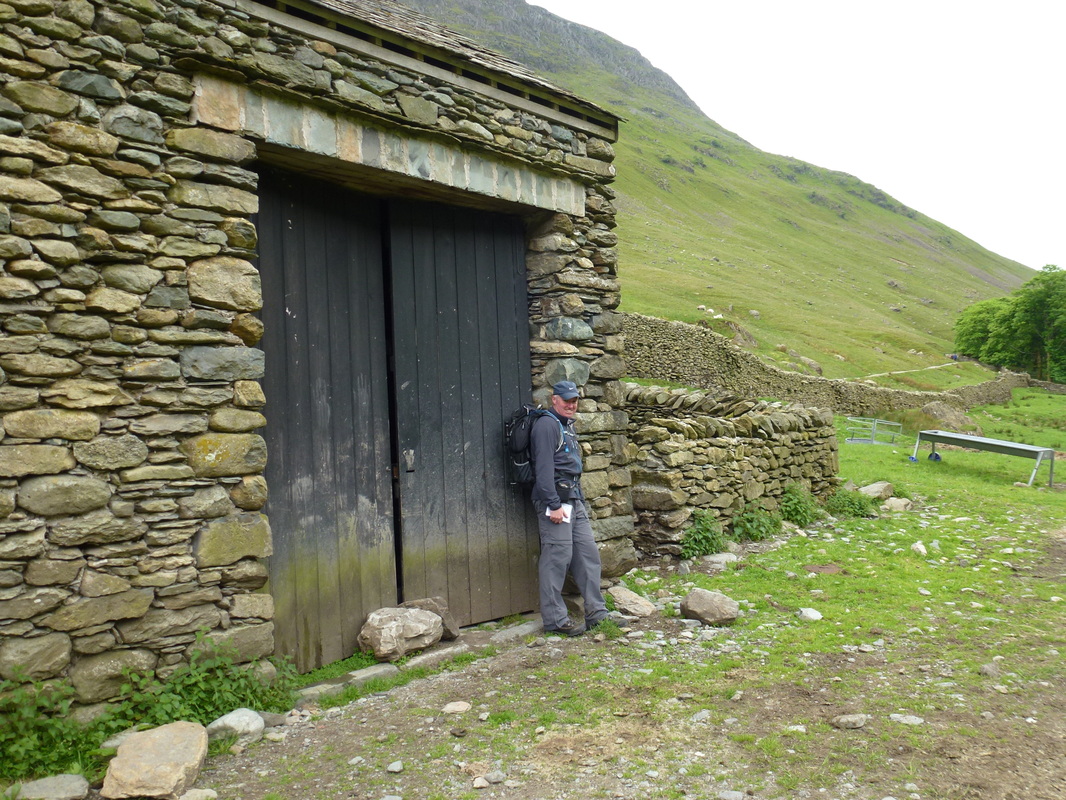 There is still much work to do on reaching the flat stuff. To get to Patterdale involves a lengthy bit of up and down through Glenamara Park and we came out at the back of The Patterdale Hotel and walked into the village stopping at the shop to buy some Millionaire’s Shortbread for tomorrow. We still had half a mile to go to our B&B at Crookey Cottage near Crookabeck Farm and we arrived there at 1645 really tired from a long but really enjoyable day. We were greeted by Ed and Hazel who made us tea and cake and we chatted to them prior to sorting ourselves out for the evening. 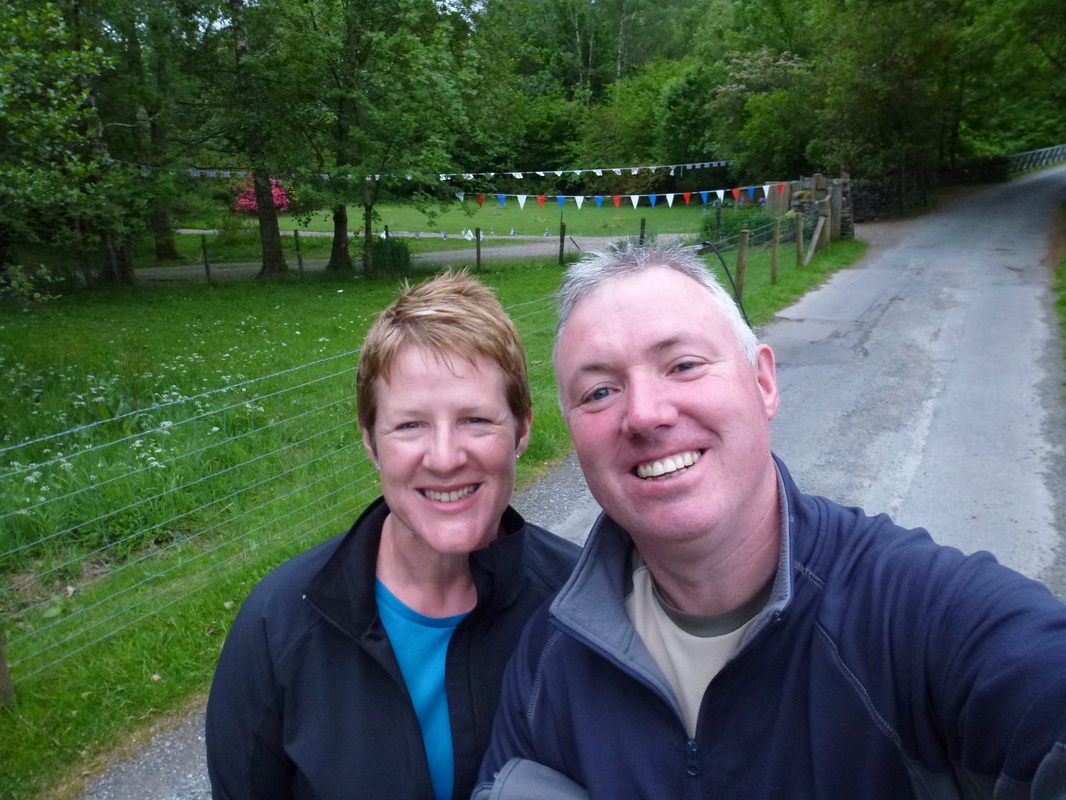 This picture will never, ever illustrate how knackered we actually were
Overnight Accommodation 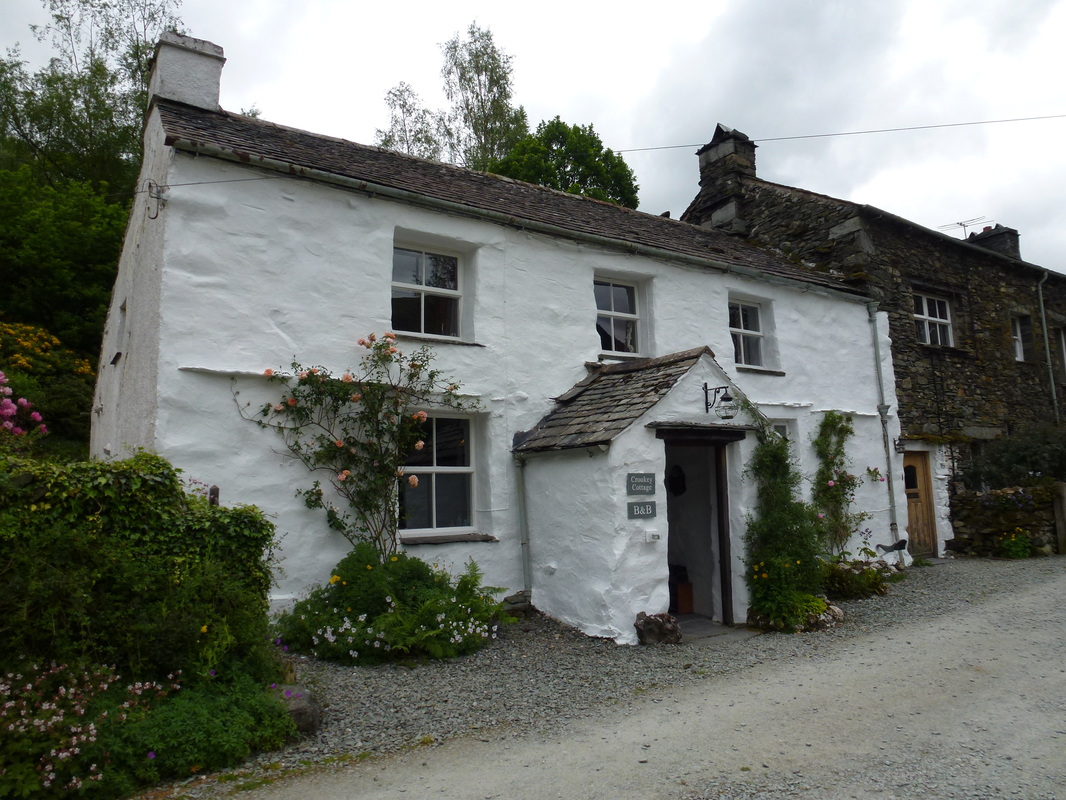 This was a fabulous B&B. Ed & Hazel have got it spot on from the welcome, rooms, breakfast and lovely packed lunch. Nothing was too much trouble and they are in an absolutely idyllic setting close to Patterdale.​
Day 3 Data