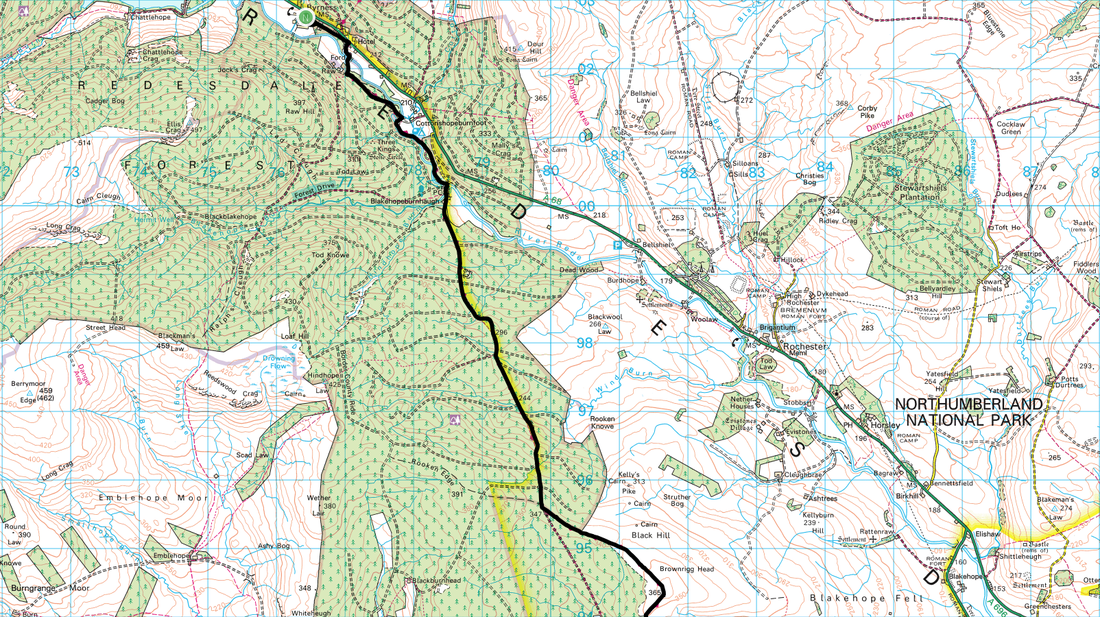 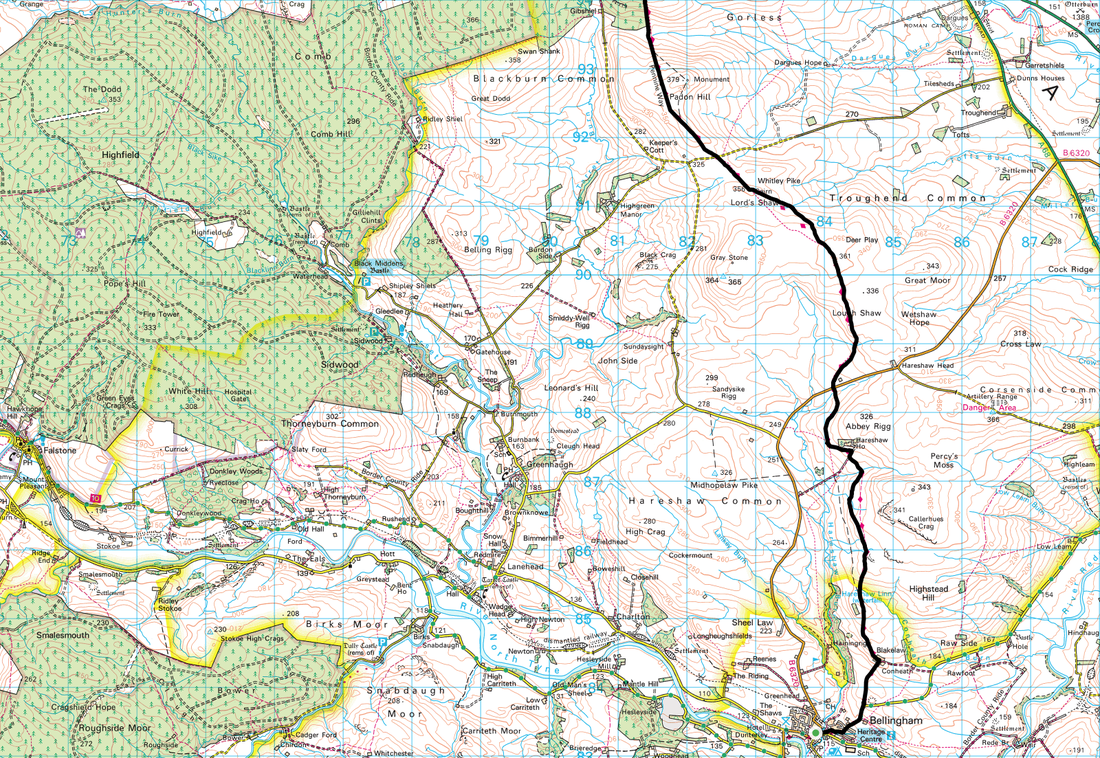 ​We awoke to sunshine for the first time in what seemed a long while. We were hoping it would stay that way for today as this was a long stretch over moorland and along forest tracks and it did. We were off to Byrness today via another big load of nothing - no villages, nothing. The route would take us over Deer Play and Whitley Pike before a long stretch through the Redesdale Forest before arriving in Byrness via the banks of the River Rede. Apart from a short steep climb this was a fairly low level route today which was extremely welcome.

The day got off to an even better start as the breakfast at The Cheviot was exceptional. We took our time over their superb fare and got chatting to the only other guests eating with us - the biker with the blistered head and his wife were also in attendance. He was clearly still in a lot of pain but was determined to ride home today - all the way to Leicester.

The route made its way east out of Bellingham and crossed Hareshaw Burn before meandering steeply to a weather station where we turned left at a farm gate onto the track to Blakelaw Farm. The path passed through the farmyard and we had a chat to the farmer who was a friendly chap - one of his Labradors had recently given birth to six gorgeous pups therefore we spent a good 20 minutes enjoying their antics. 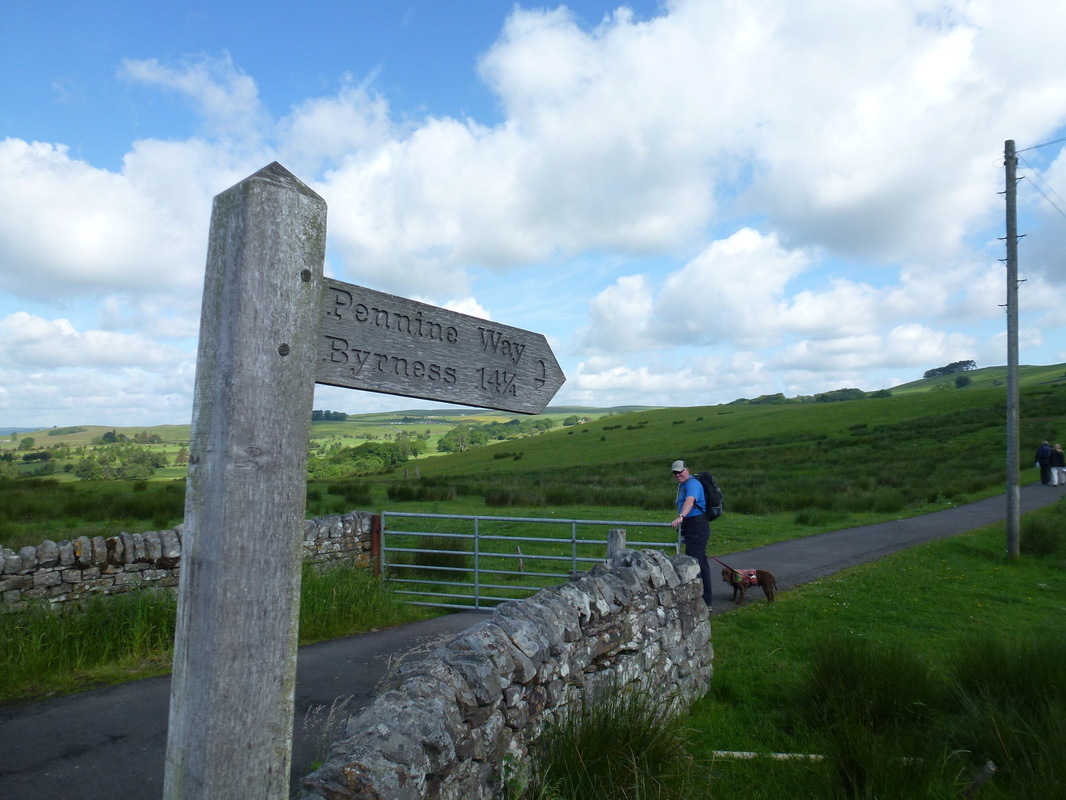 Leaving Bellingham on our way to Byrness 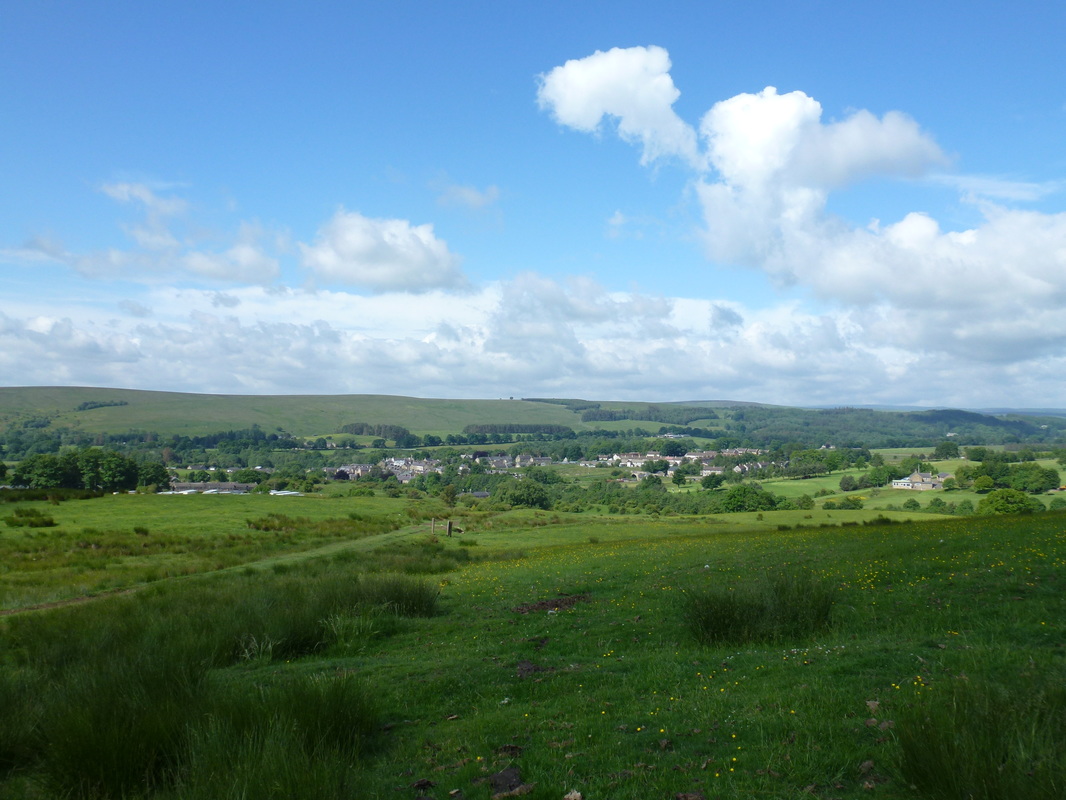 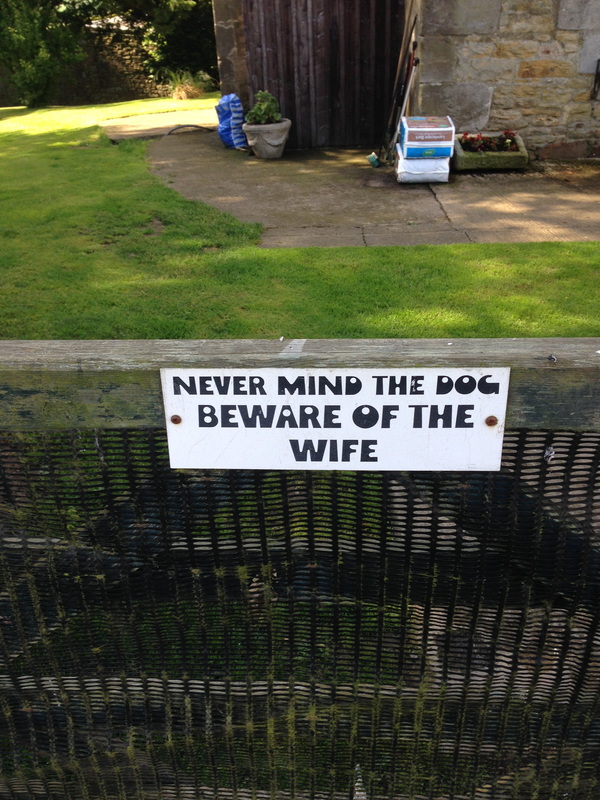 The farmer at Blakelaw Farm clearly had a sense of humour 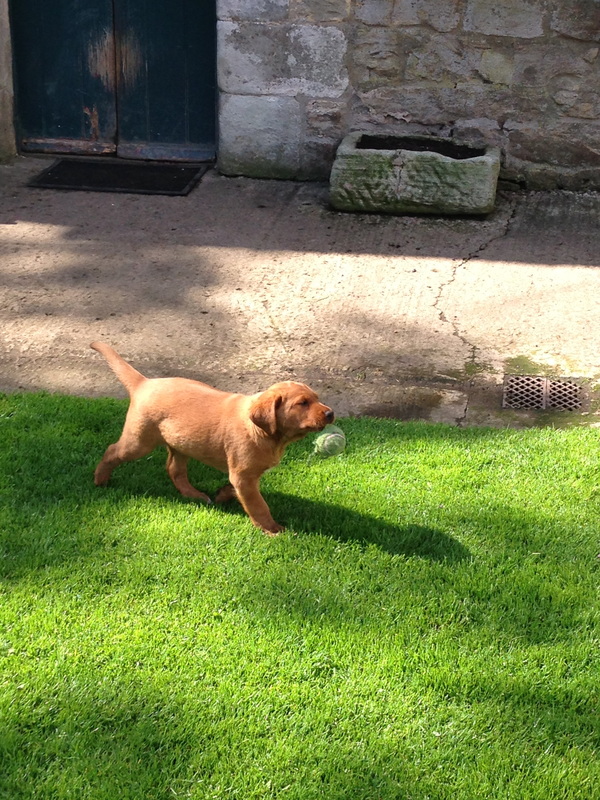 Cute pups at Blakelaw Farm
From the farm we passed to the right of the rocky outcrop of School Crag before heading out on to the open fell side. Ahead of us we could see the familiar figures of Ian & Rosie who were also off to Byrness and like us would be staying at Forest View for 2 nights and splitting the final 27 miles up into two manageable chunks. This was a delightful part of the walk and we could see Hareshaw House in the trees ahead as we passed over a mildly boggy section before crossing a footbridge to reach the property. The Pennine Way then passed through the grounds to reach a wall corner where Ian & Rosie were taking advantage of the glorious weather and resting up.

We stayed and had a chat with them for a while and whilst enjoying a snack a lone walker came up from Hareshaw House - this was Harry, a Medical Physicist from Winnipeg in Canada who was walking solo. He was camping whilst walking the way and was also staying in Byrness but unlike us would be doing the last 27 miles in one go thus finishing a day earlier. On he went and we left shortly after him, leaving Ian & Rosie at Hareshaw - we would not see those two again until Byrness.​ 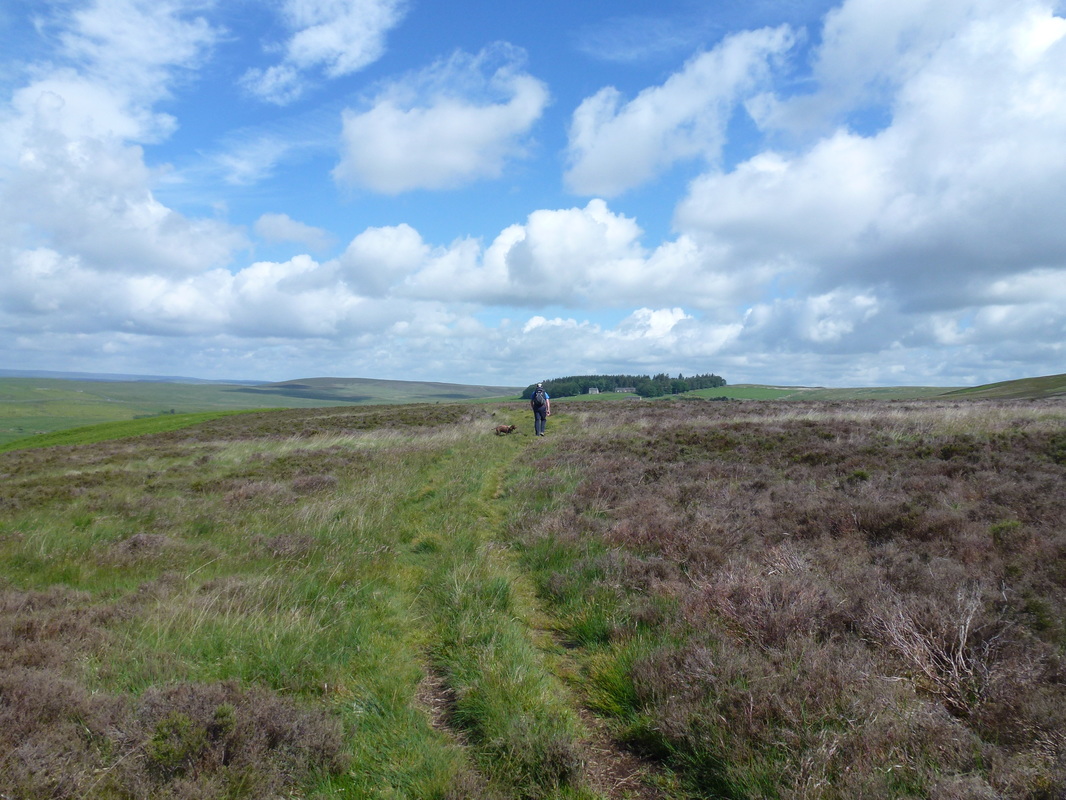 Heading for Hareshaw House which is in the trees ahead
Back on open fell for a short while the route then reached a former colliery railway track before arriving at the B6320 which is the Bellingham to Otterburn road. We watched Harry cross the road and then go immediately right when the path clearly went half right - on he went and he must have looked back to see where we were and Dave made a gesture to him that he may be going slightly off route - he then turned to make his way back on to our path, thanked us and strode on. Considering he was carrying everything with him he was walking at a good pace. The walking now was over open ground with superb views all around and with Harry still ahead of us, we headed over Lough Shaw to reach the summit of Deer Play with our next summit of Whitley Pike clearly in sight about 3/4 of a mile distant.​ 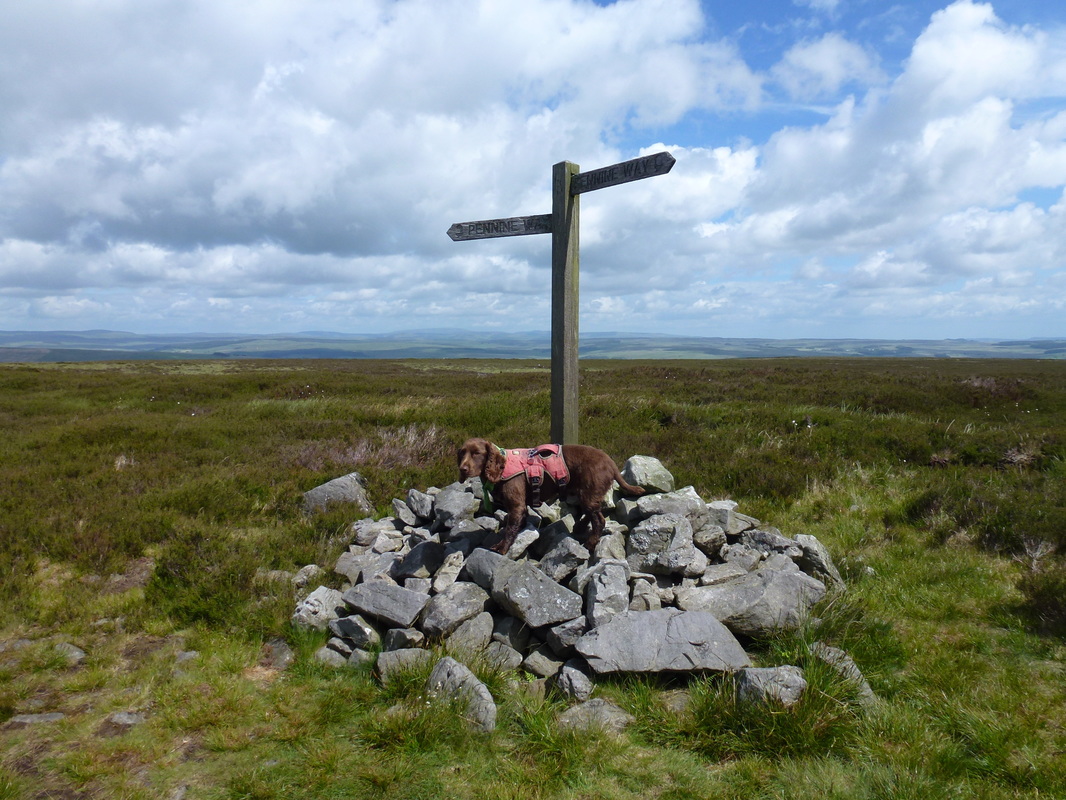 The summit of Deer Play 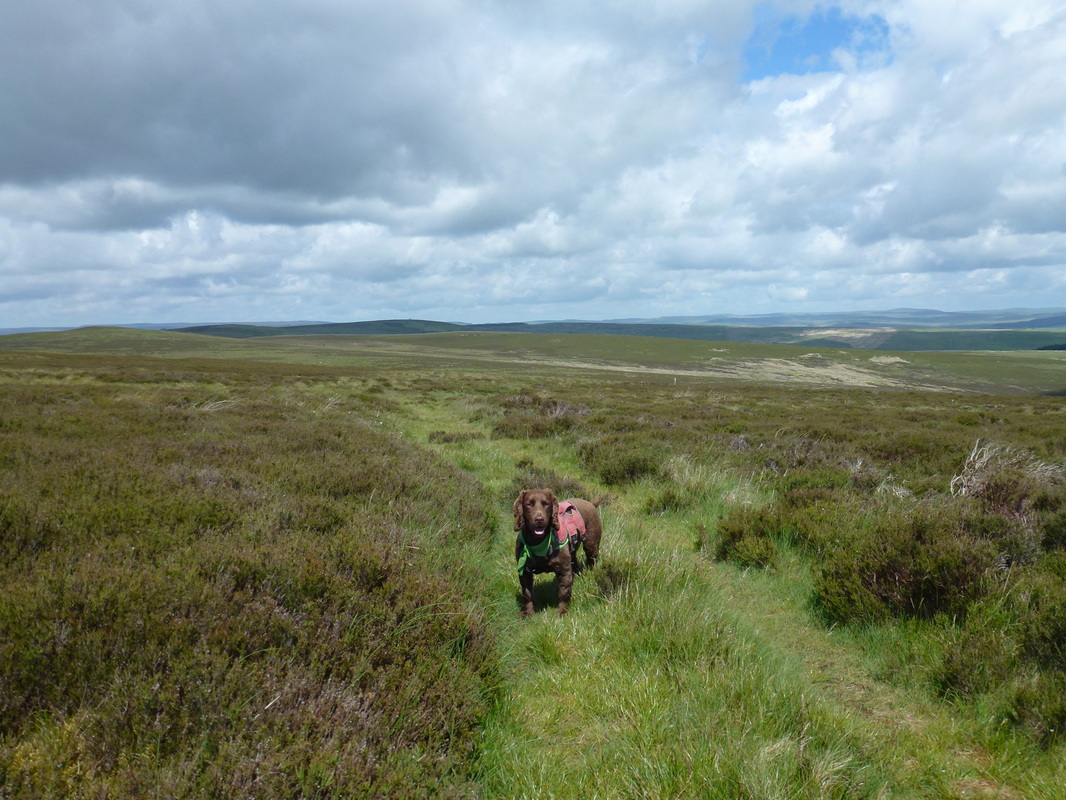 Fudge at Deer Play
Crossing the fence at Whitley Pike there is a clear slabbed path over the hillside and we expected to see Harry striding purposefully over it - he was striding purposefully alright but in completely the wrong direction. There was then one of those comedy moments when you watch someone walking who suddenly realises they are going the completely wrong way - he then looked over to us, checked his map & GPS then gave it Billy Big Steps to get back on the slabbed path. When he reached us Angie let him past and he said not to worry as we would probably catch him up when he went wrong again!!​ 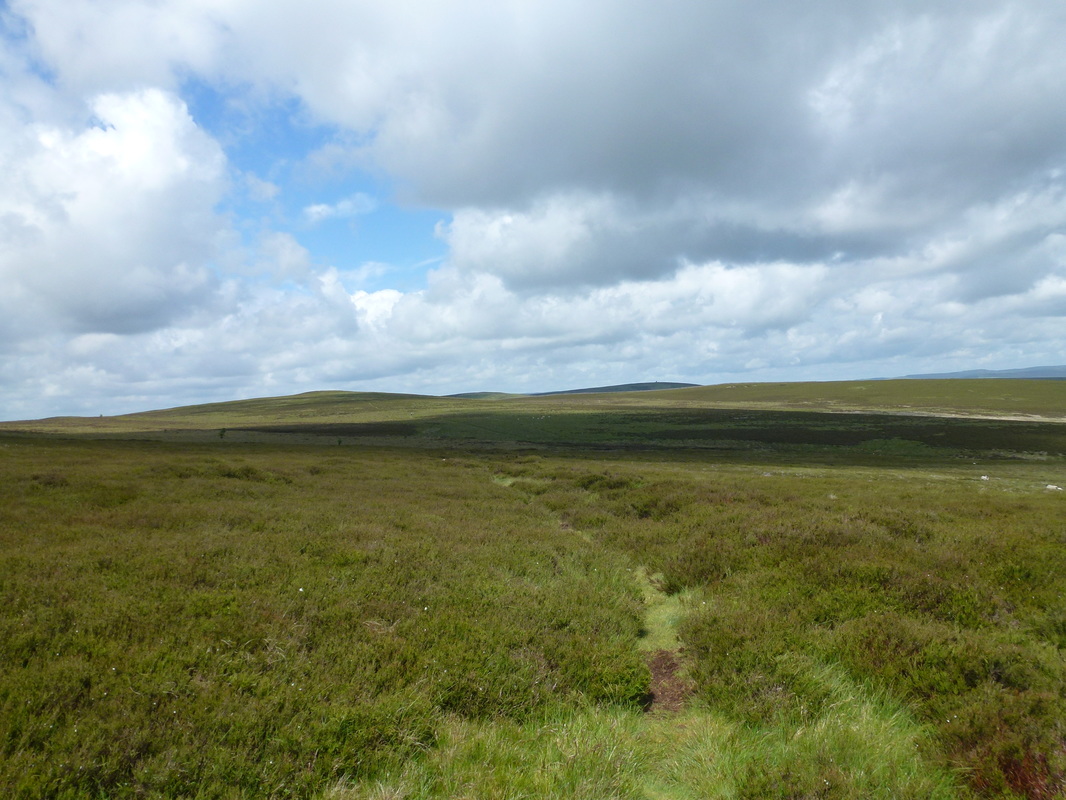 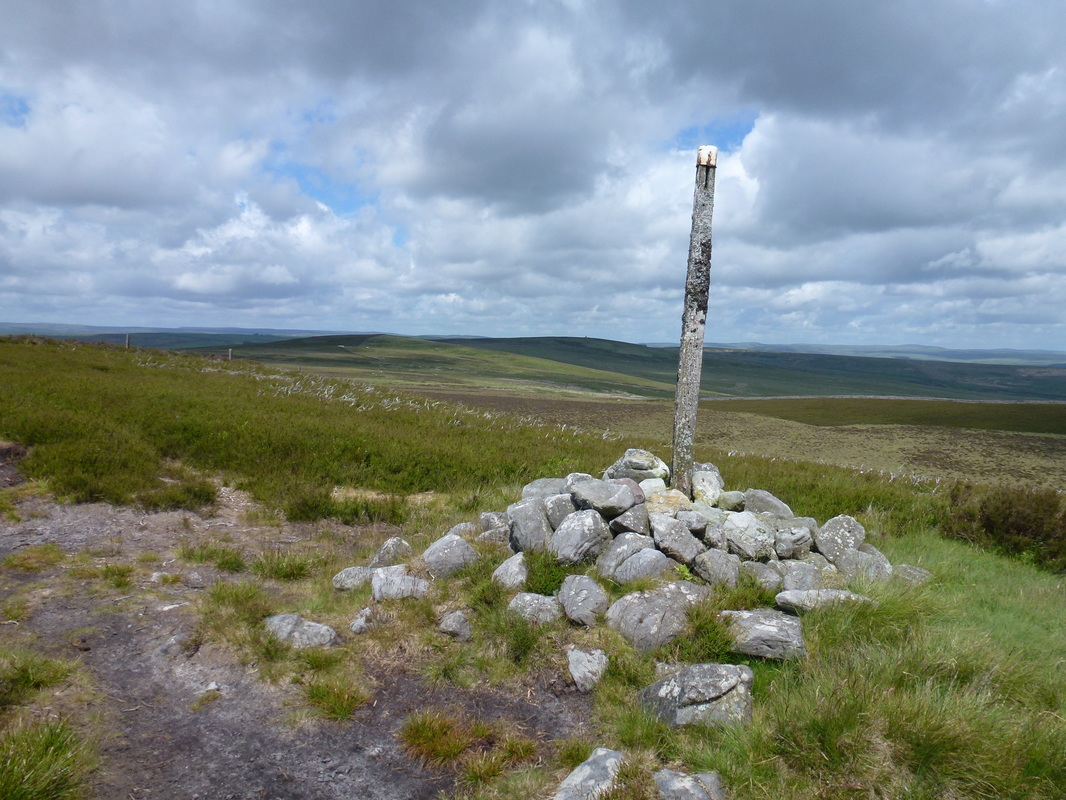 The summit of Whitley Pike 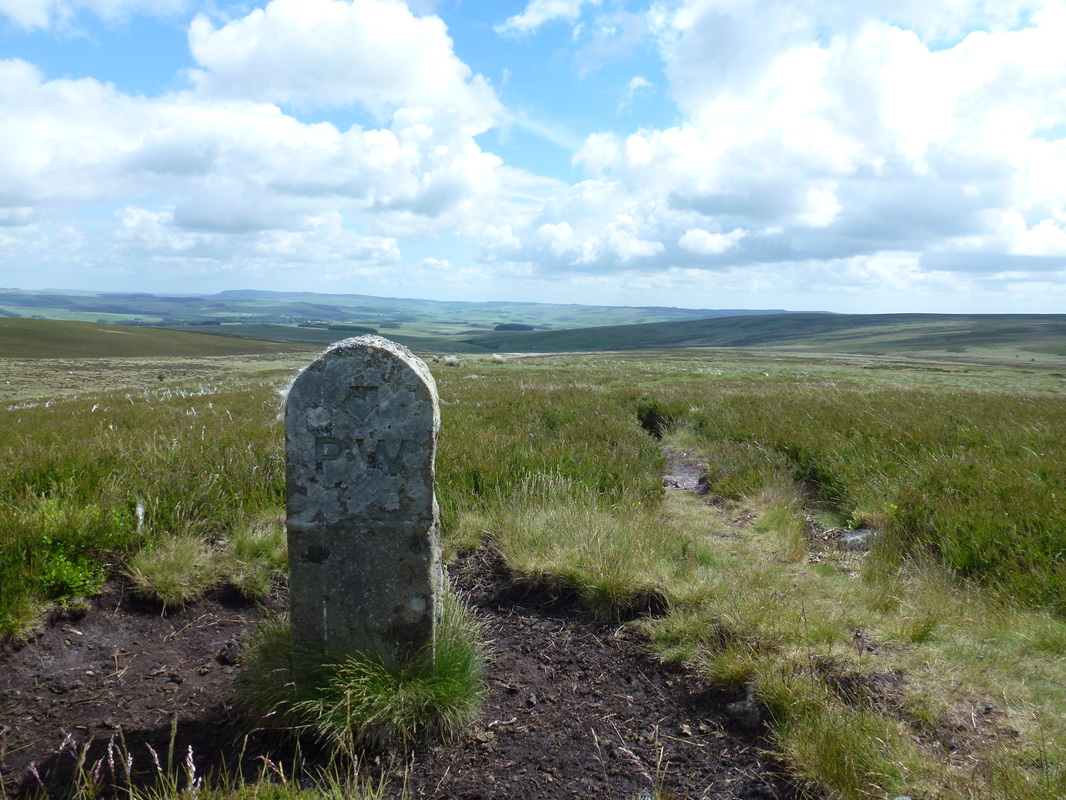 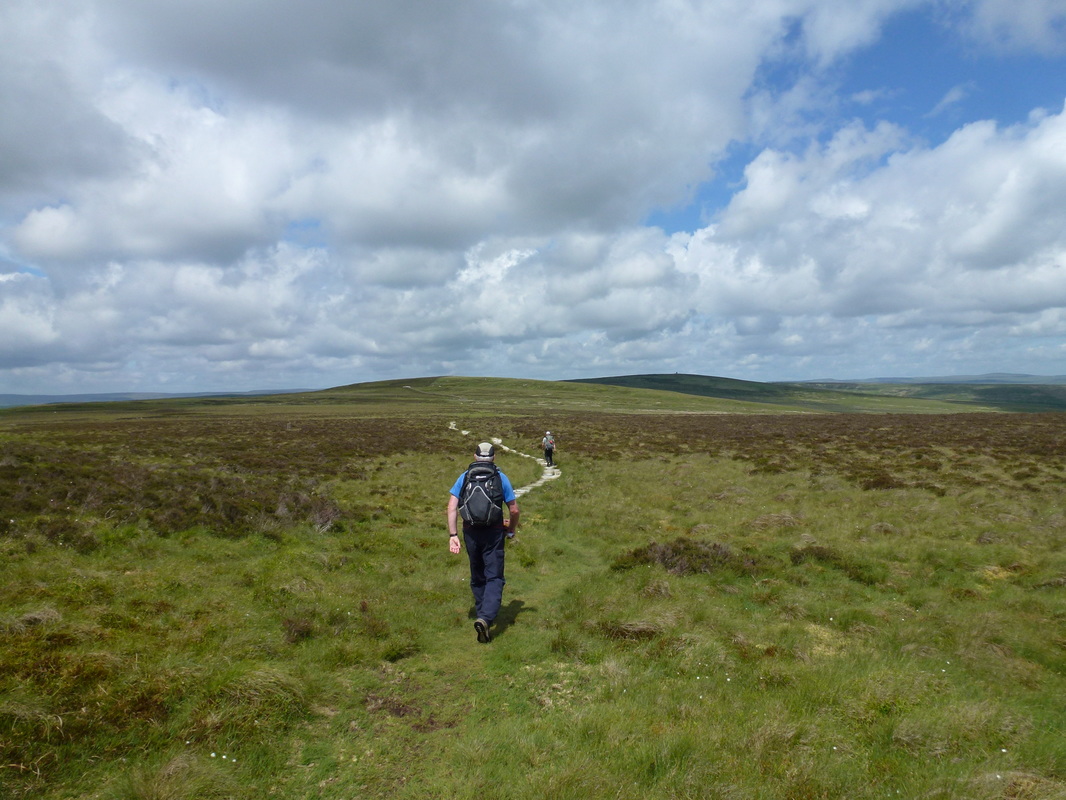 Leaving Whitley Pike towards Padon Hill which is to the right.  The Pennine Way passes to the left of the hill.
Harry is ahead of Dave - we think he had sorted out his navigation by this time!
Crossing the moorland road we then hand railed a fence for about a mile and we could see the Pepperpot Cairn on the summit of Padon Hill to our right - thankfully we could also see Harry ahead who had reached the slab bridge at the wall before the ground steepened. Arriving ourselves at the wall there now began a very steep ascent of Brownrigg Head with a cleared forest to the left and a broken wall to our right. From Brownrigg Head the route continued to follow a fence, passing several stone boundary markers and was an absolute bogfest. We knew at some point we would hit the forest track coming in from the left but it seemed to take an age to materialise - of course it did and we were never in our lives so glad to see a boring old forest track.​ 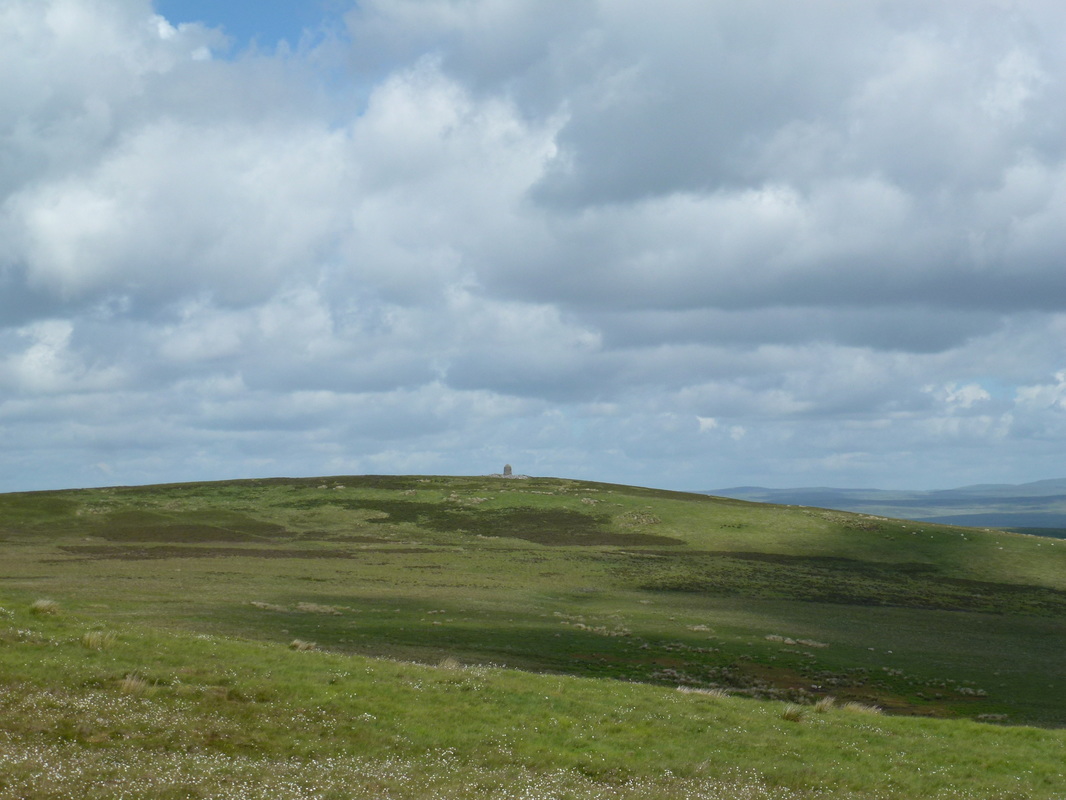 Padon Hill and its Pepperpot Cairn 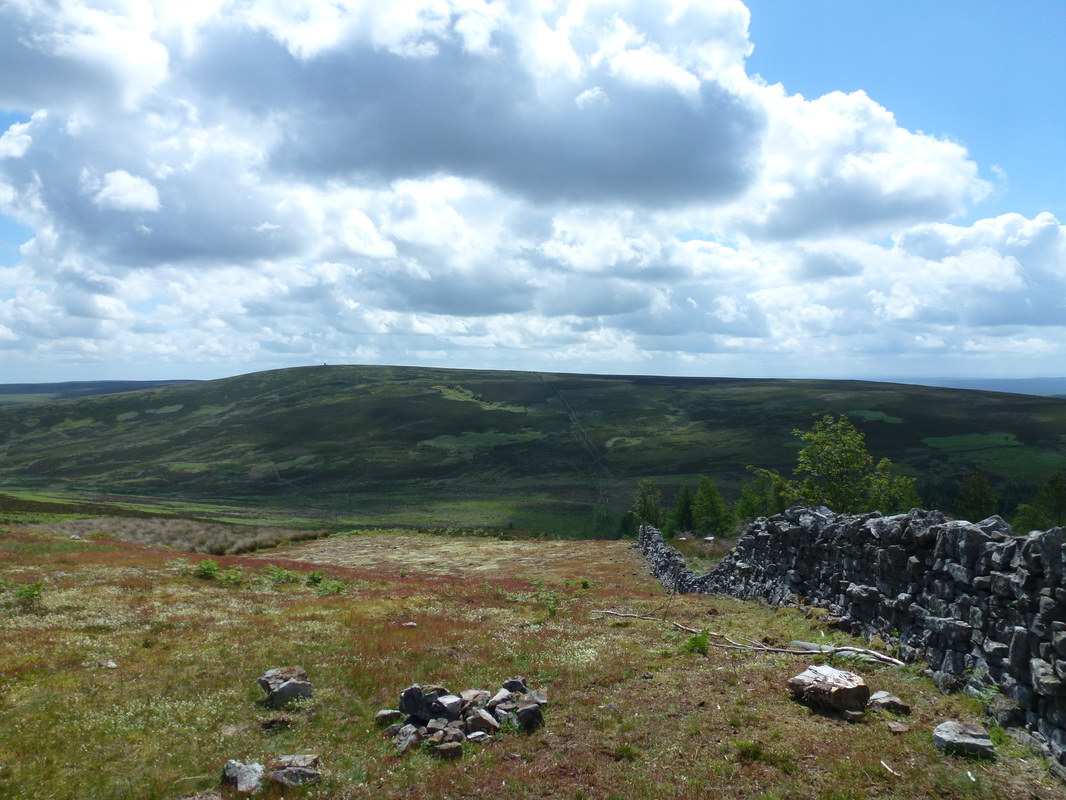 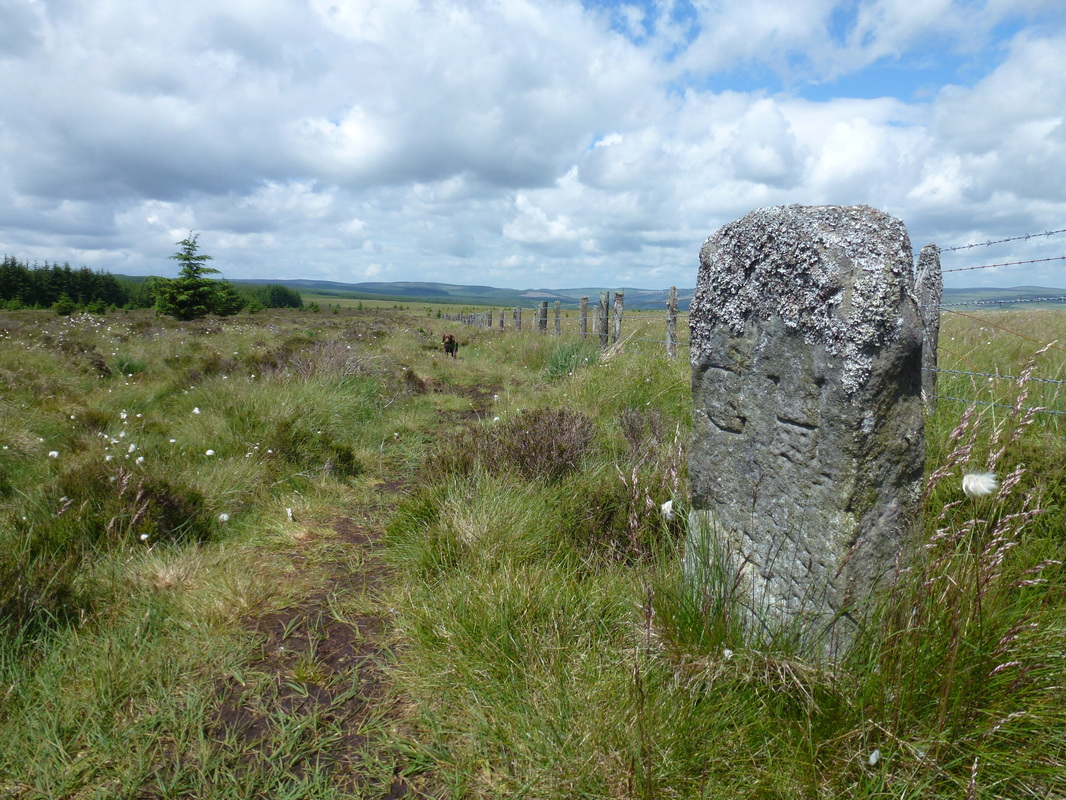 The GH Marker Stone just on from Brownrigg Head.  The GH stands for Gabriel Hall and marks the estate boundary.
This section of the route was very boggy and mainly over rough, tussocky grass - we were glad to see the back of it 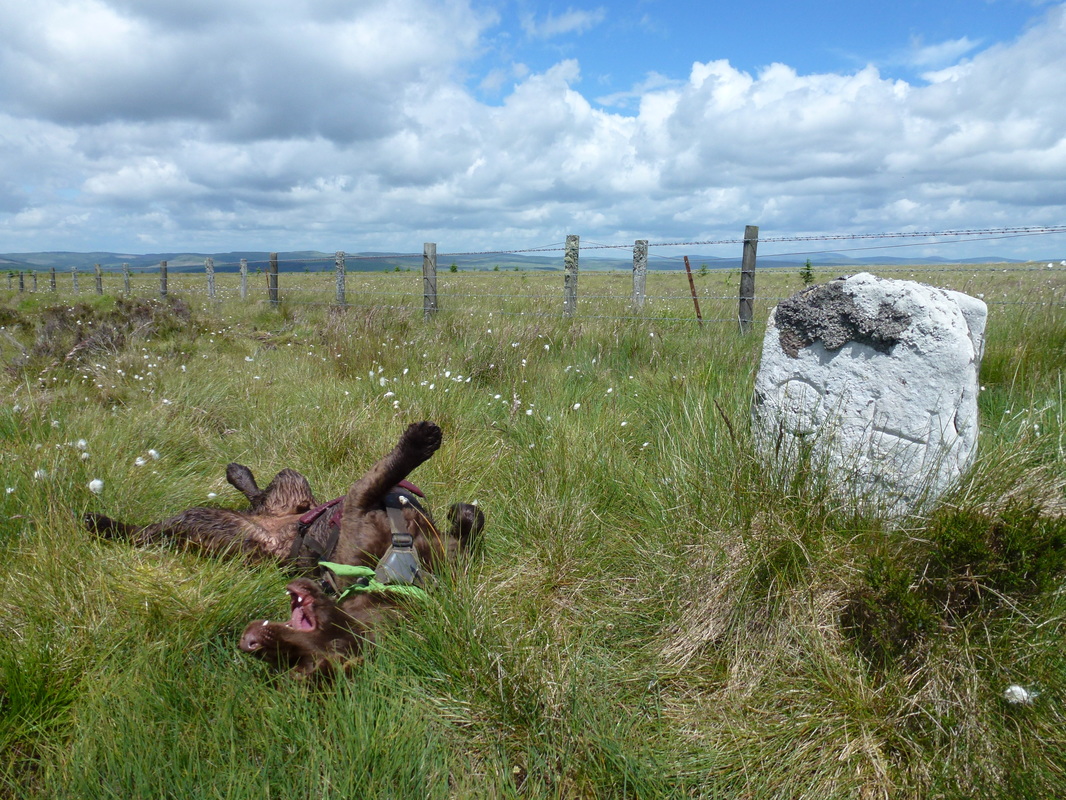 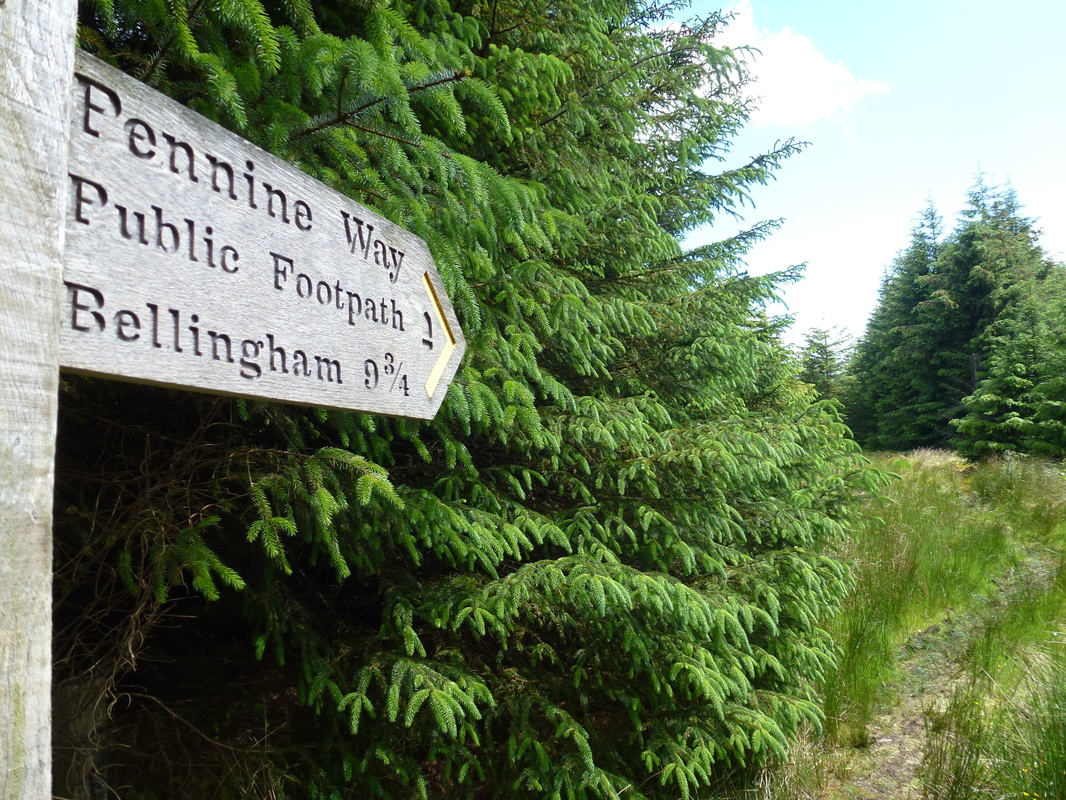 Reaching the end of the Bogfest - almost 10 miles done with another 6 to go
We were now in the huge Redesdale Forest and there now began a 3-mile trudge along a forestry track to Blakehopeburnhaugh - we just got our heads down and cracked on with it. There were a couple of occasions where the Pennine Way left the track and joined up with the same track a bit further on - we took an executive decision to stay on the track as our guidebook advised us that there was nothing but long grass, high bracken and bog to be had if we took the purist route.​ 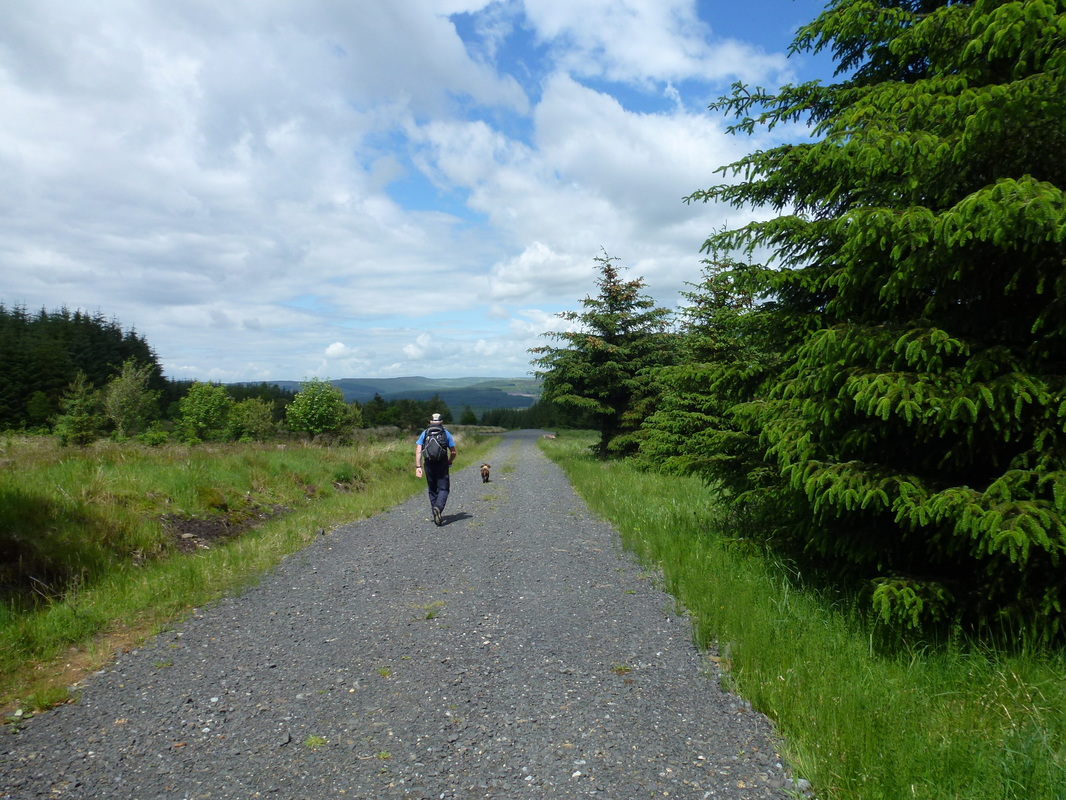 At last, respite from the boggy, tussocky forest mess.  Fudge is in "bimble" mode 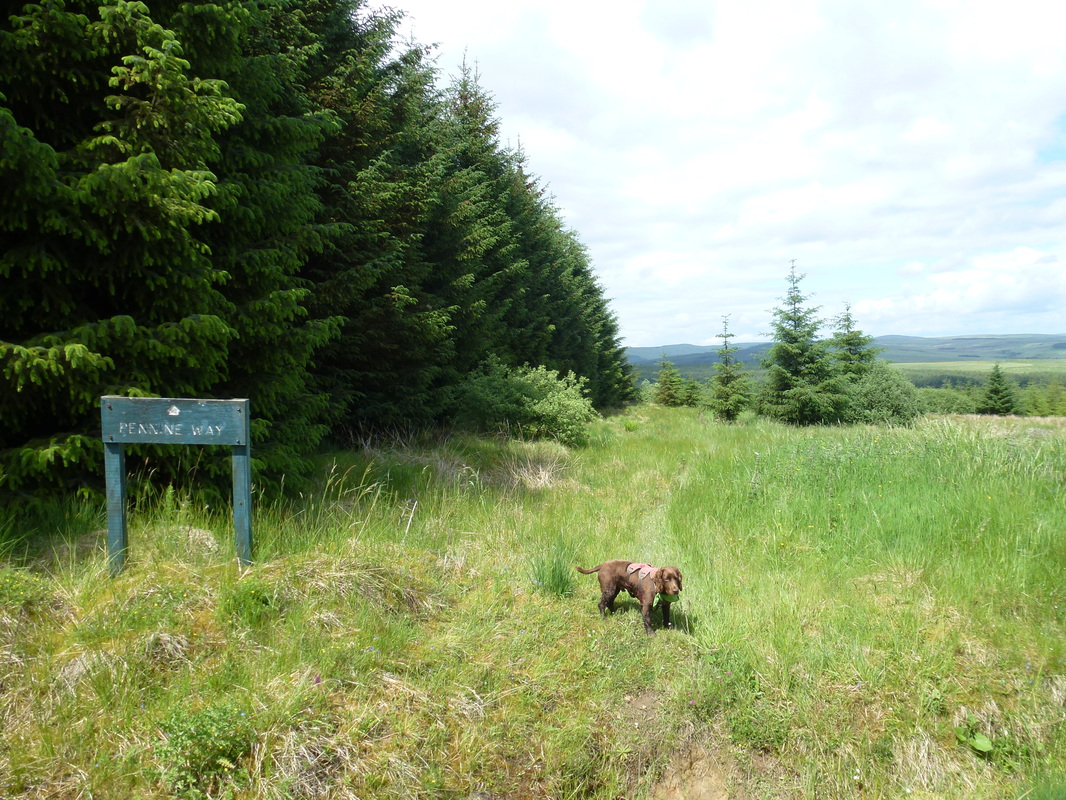 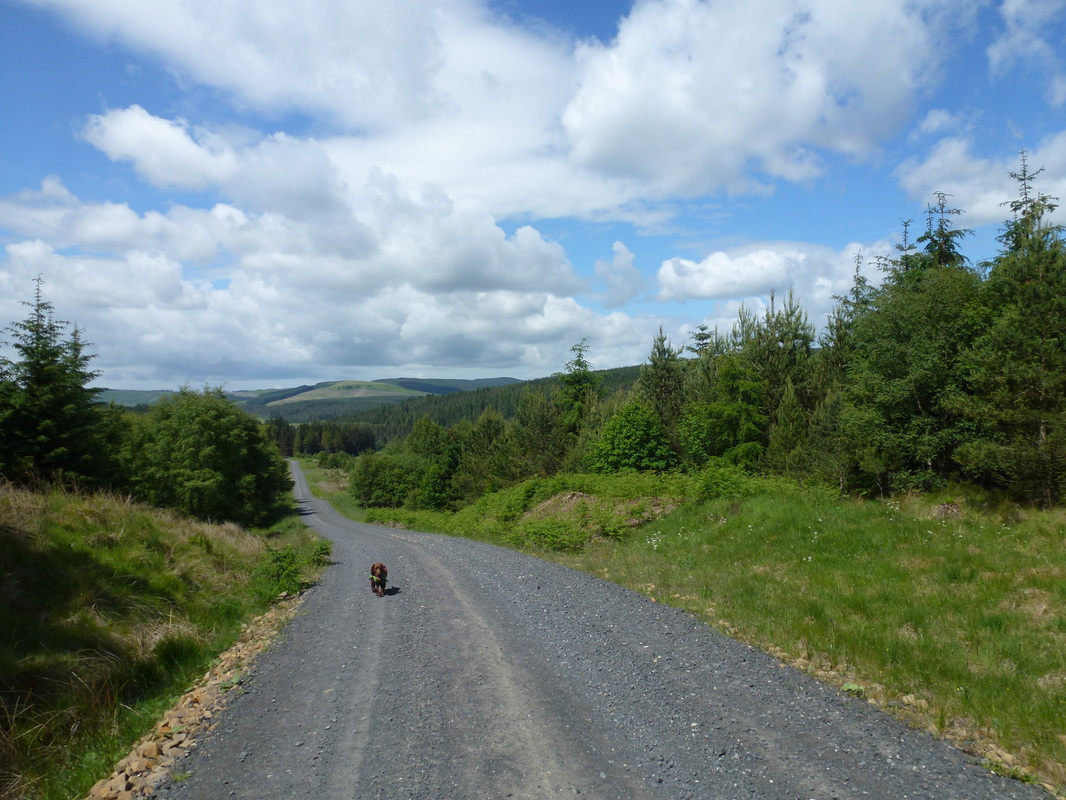 .. and on we trudge along the never ending forest track.  At least it wasn't raining!
We eventually arrived at Blakehopeburnhaugh where there is a Forestry Commission Car Park, toilets and nowt else although there were lots of vintage sports cars just about to start out on some sort of race. We left them to it and took the access road to walk along the bank of the River Rede - this was another delightful stretch of the route although the A68 runs parallel to the path. Passing a caravan site it was now a simple question of walking the short distance into the quiet village of Byrness to reach the Forest View Walkers Inn. We were met by Colin the proprietor and immediately spotted Harry pitching his tent in the garden - thankfully he had no more navigational tomfoolery and had arrived about half an hour before we had.​ 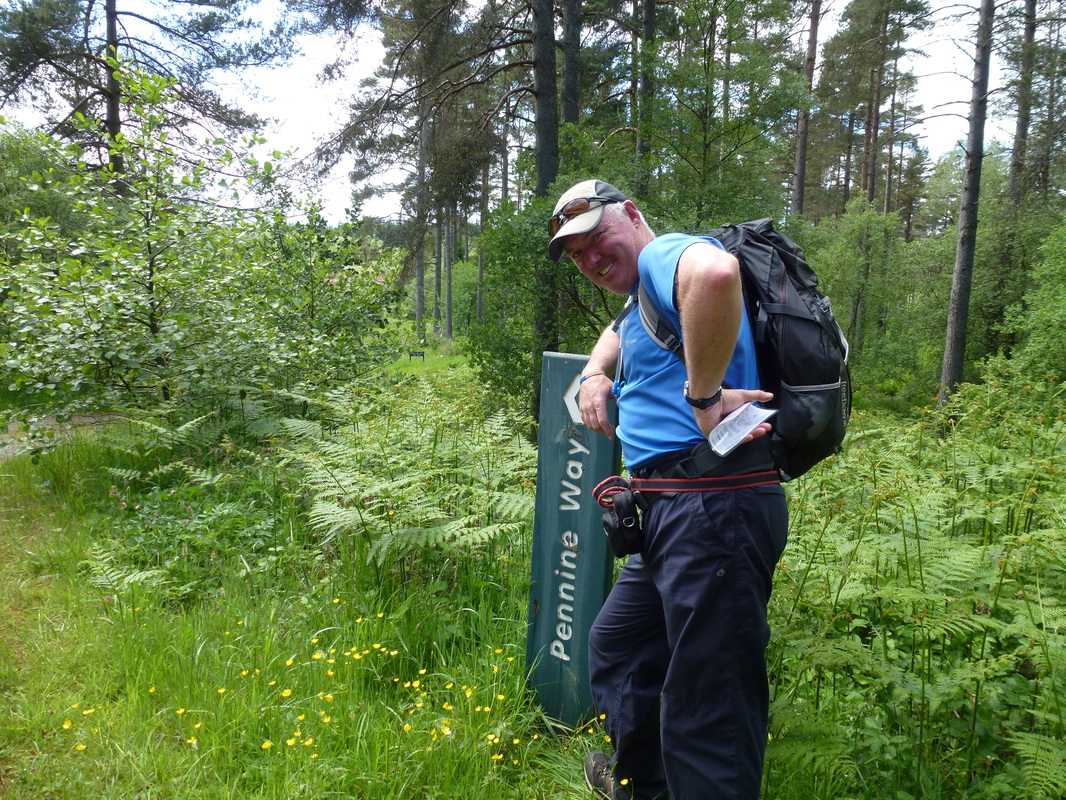 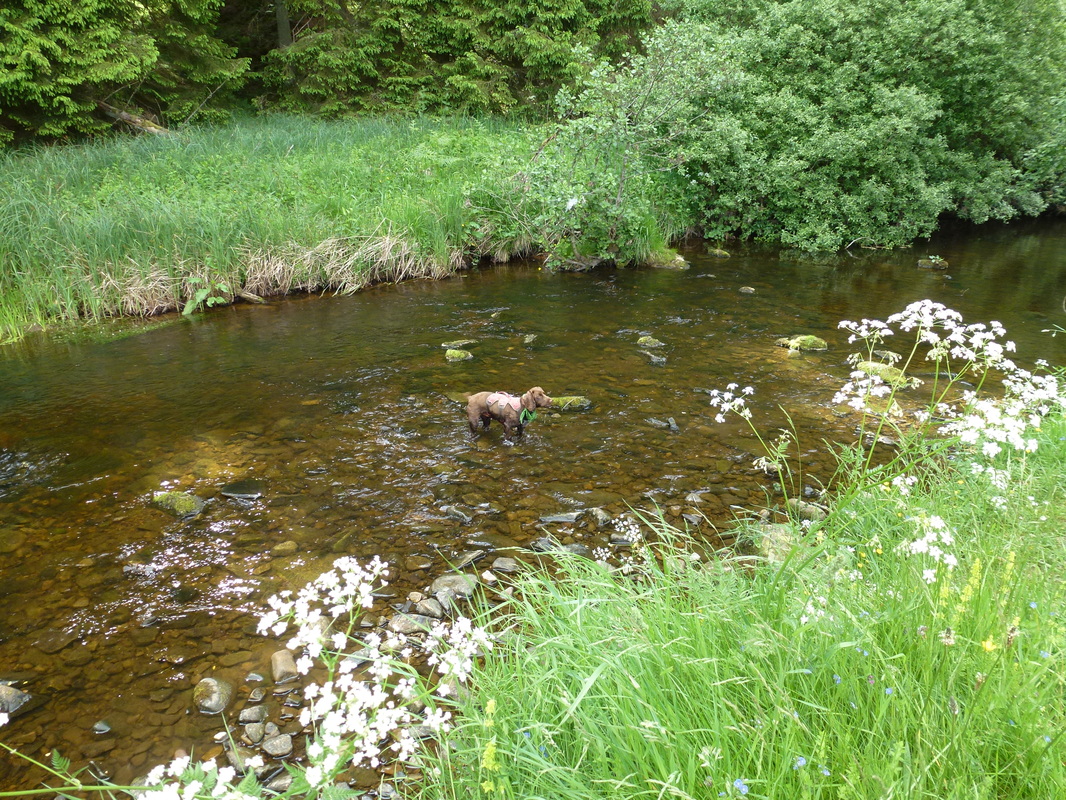 Fudge cooling his paws off in the River Rede near Byrness
Settling in, we sorted ourselves out and then relaxed in the conservatory before Ian & Rosie arrived. Joyce, the co-owner then arrived back from picking up 8 Londoners from Trows Farm who had walked the penultimate leg today and were therefore taking advantage of the excellent 2 day package and would finish their walk tomorrow. The remainder of the evening was taken up with an excellent dinner, chatting with our fellow guests and being briefed by Joyce as to the arrangements for our pick at Trows Farm the following evening. Harry was away at 0500 the next day to walk the 27 miles to Kirk Yetholm - we wished him well and then turned in. Apart from the boggy section this was another good day, particularly the transit from Bellingham to Brownrigg Head.
Overnight Accommodation 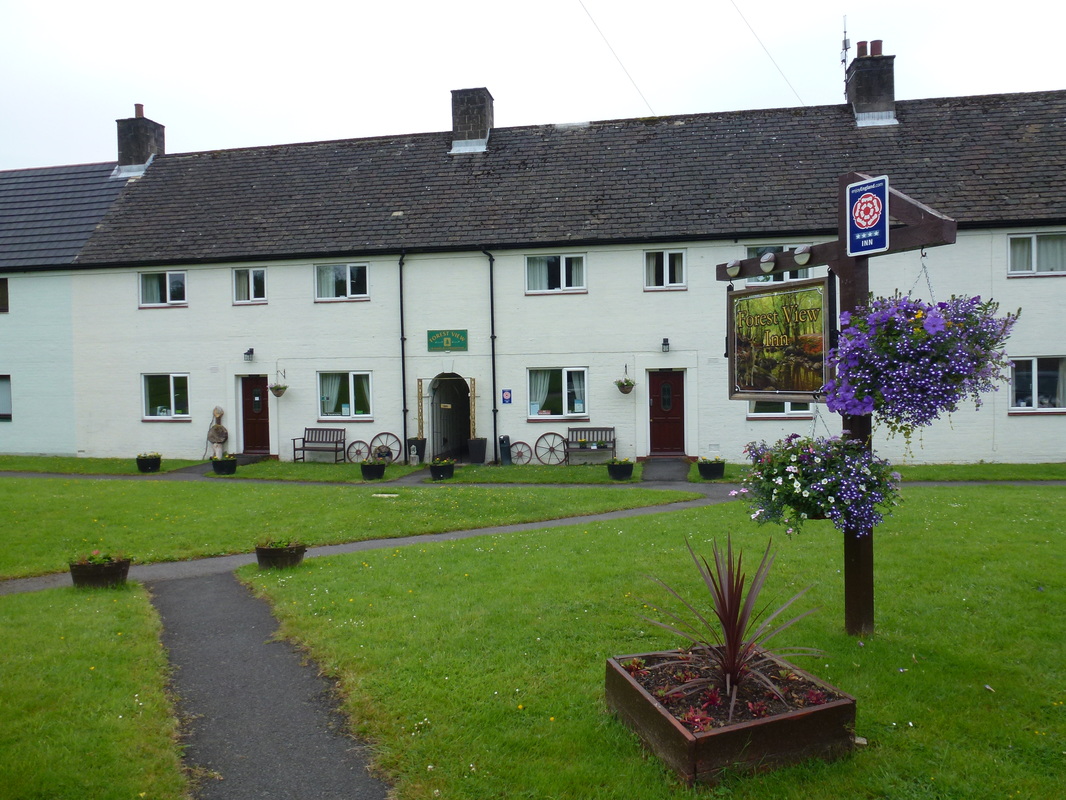 Really good value 2 day package here which includes B&B, Evening Meal and a drop off and pick up to split the last 2 legs up.  Colin & Joyce run a tight ship and keep several real ales very well which was an added bonus.
Day 19 Data