Plenty of parking in Hathersage.

Good paths throughout - care should be taken on Stanage Edge because of the steep drops​​​.

Sunny for the most part but cold and windy on the exposed paths on the Stanage Edge escarpment.

​OL1 - The Peak District (Dark Peak Area)
​If the above GPX file fails to download or presents itself as an XML file once downloaded then please feel free to contact me and I will send you the GPX file via e-mail.  ​​ 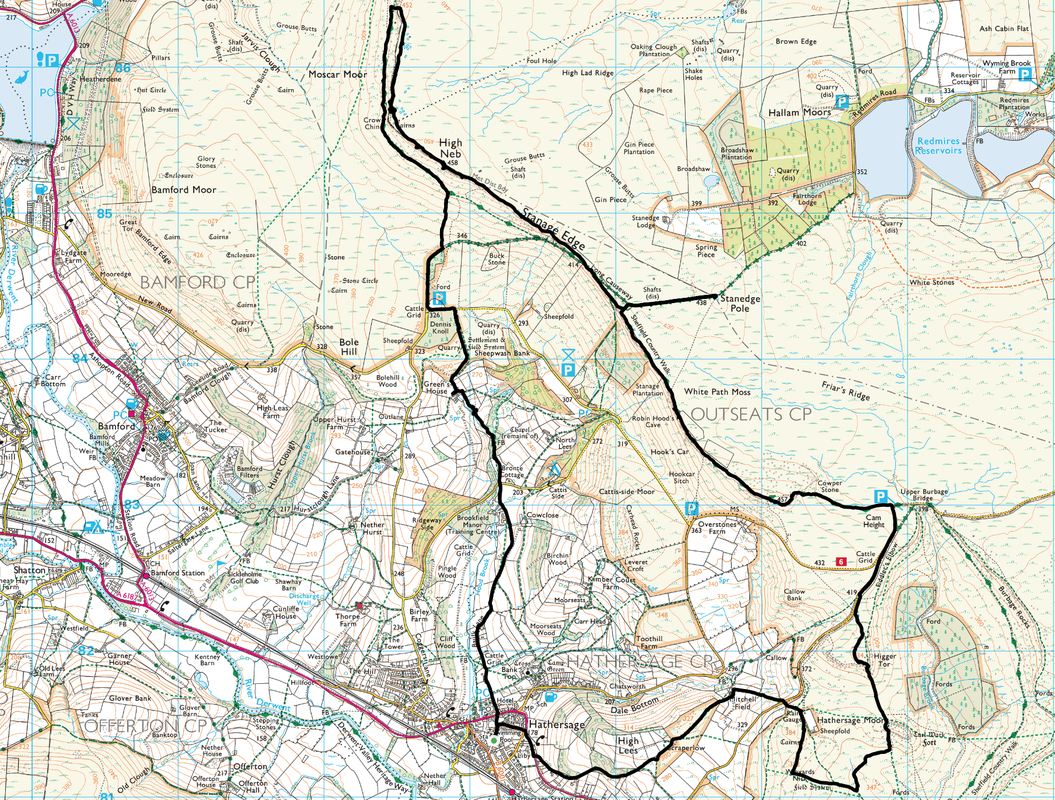 We have been up on Stanage Edge many times but as we were in the Peak District once again, we decided to have another wander up there - particularly as the weather promised to be that of clear visibility, crisp and rain free. Stanage Edge is a gritstone escarpment and the northern part of the Edge forms the border between the High Peak of Derbyshire and Sheffield in South Yorkshire. The highest point on the Edge is High Neb at 1503ft (visited on this walk). The area has been quarried in the past to produce grindstones, some of which you can see scattered about on the slopes below the escarpment (see picture below). The escarpment once had a paved packhorse road along the top, some of which can still be seen today. The Edge is popular with climbers and whilst the climbs are modest in height - only 25m at their highest - they are considered variable enough to warrant many people visiting them each year.

The walk started from the centre of Hathersage where there is a plethora of parking available, both free and not so free. Heading for Baulk Lane, we headed down the tarmac road which soon turns into a farm track. There was now a pleasant transit over farmland to reach Dennis Knoll, a road from which leads to a myriad of paths below Stanage Edge. We decided to head North to walk along the path beneath the Edge itself. On reaching Stanage End there was a short scramble up a rocky path to reach the top of the Edge. On a day like today the entire Edge was spread out before us and we took our time along the good path to reach the highest point on the Edge at High Neb which is marked by a white Trig Point.

From High Neb we transited a section of the Edge known as the Long Causeway to reach the turn off for Stanedge Pole. The pole marks the border between Derbyshire and South Yorkshire and can be seen for several miles around. However when we visited there was no pole in sight, it having been removed in February 2015. As of April 2016, a new pole has been erected and as far as we know is still there! Returning back to Stanage Edge the same way, we continued to make our way along the Long Causeway to reach the Trig Point at Overstones to drop down off the edge near the Cowper Stone. From here we transited over to Higger Tor to reach the remains of the Iron Age Hill Fort at Carl Wark.

Leaving Carl Wark, it was now a simple case of returning to Hathersage via Mitchell Field. If you have not visited Stanage Edge then it is highly recommended that you do but pick a day with excellent visibility. The views are exceptional both along the Edge and outwards from it. A superb day out and in our opinion one of the best walks in the Peak District. 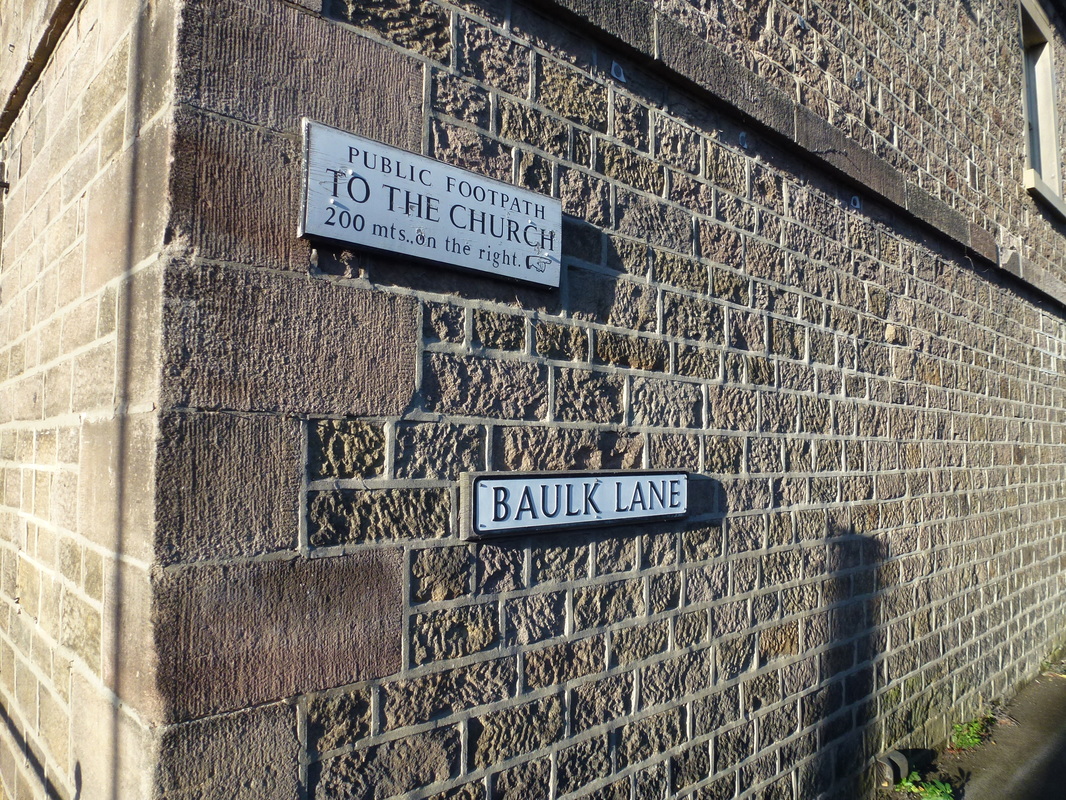 Leaving Hathersage, the route heads down Baulk Lane which leads to a farm track 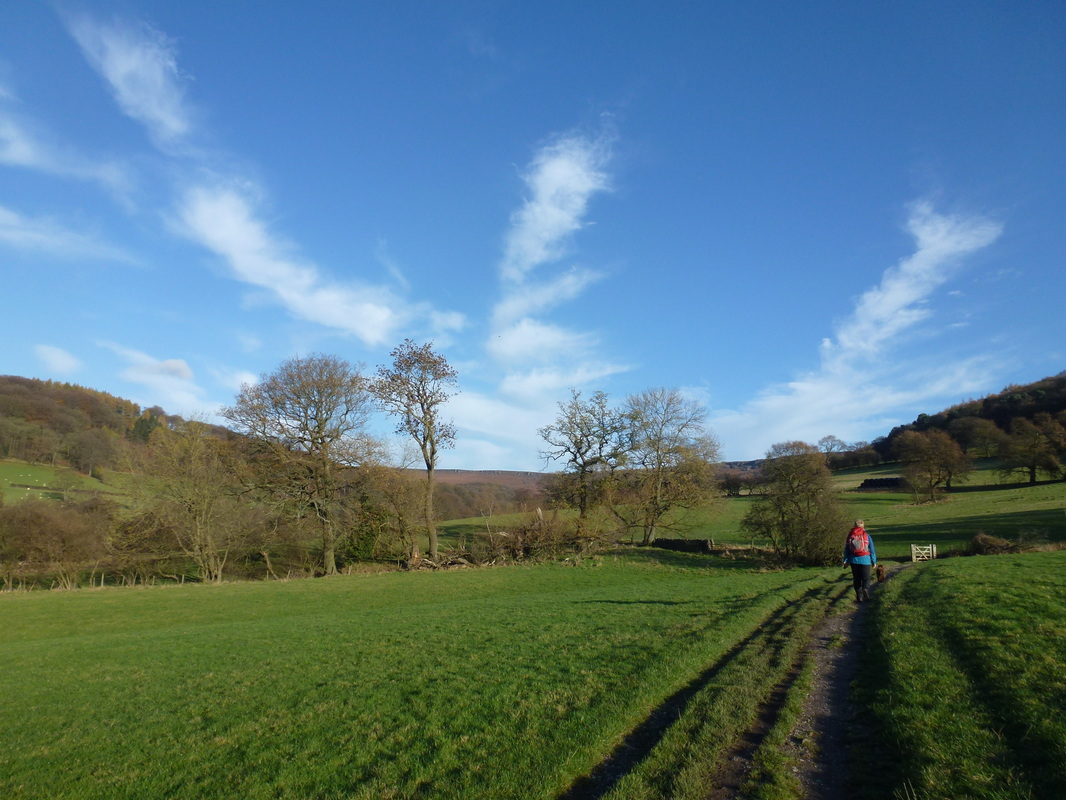 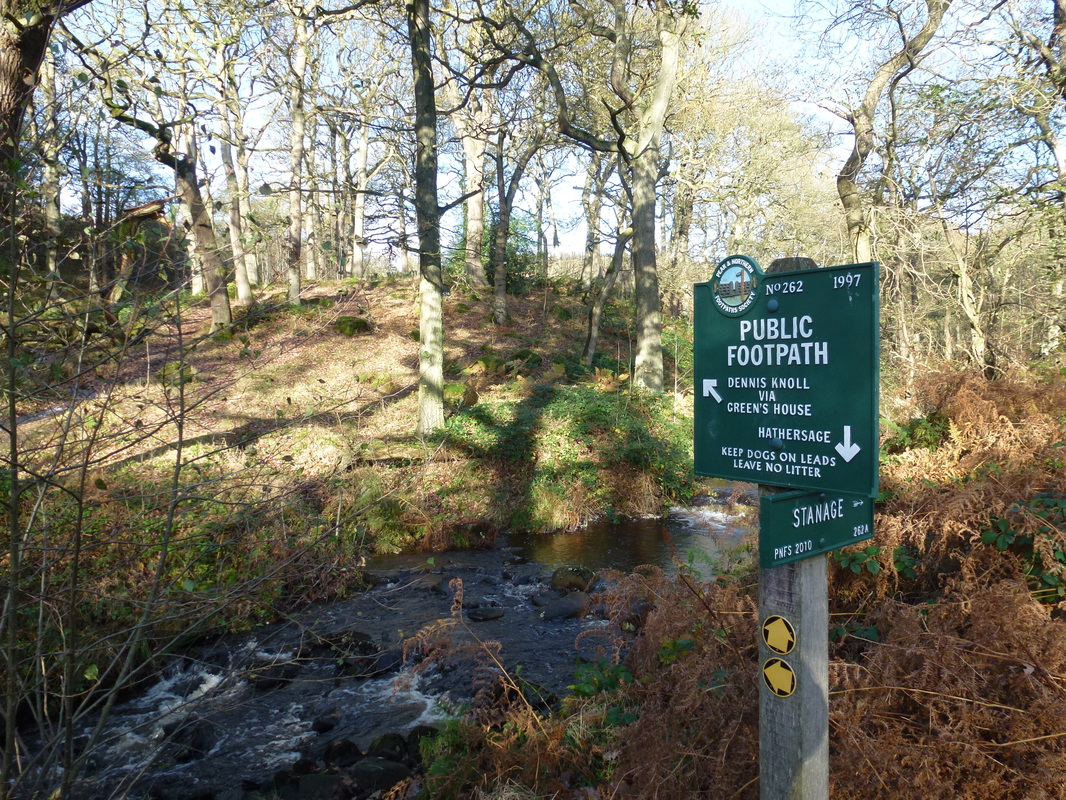 We were off to the left to go via Dennis Knoll 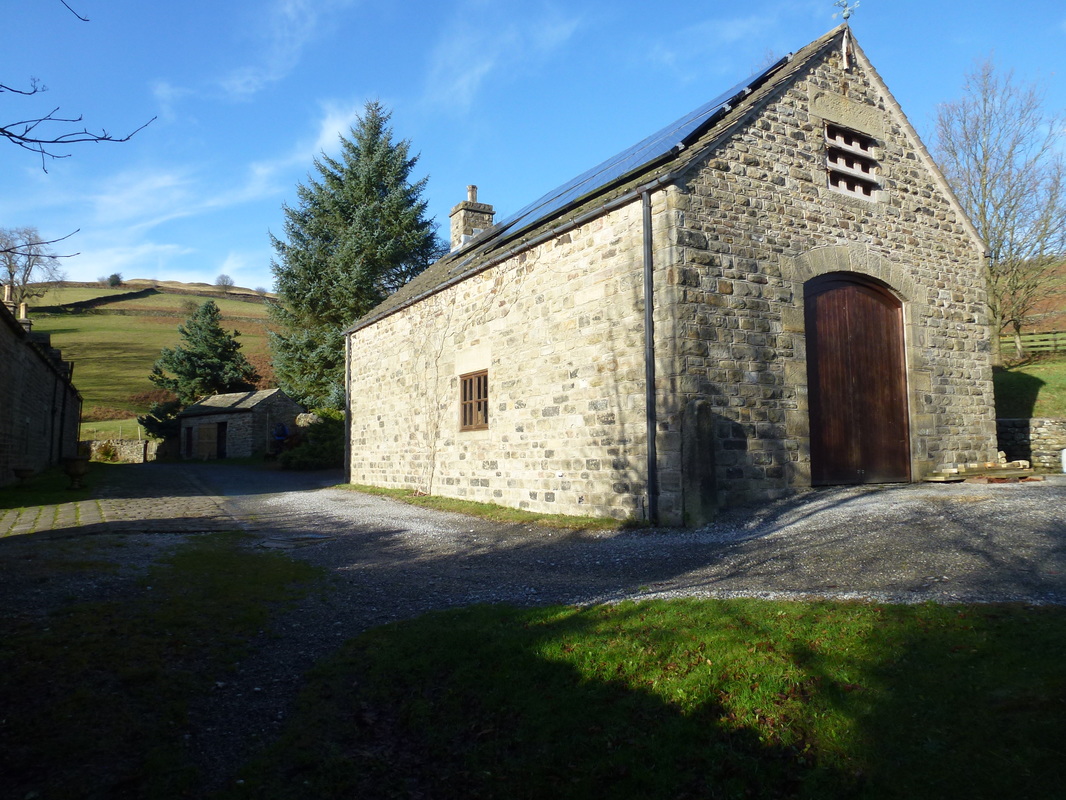 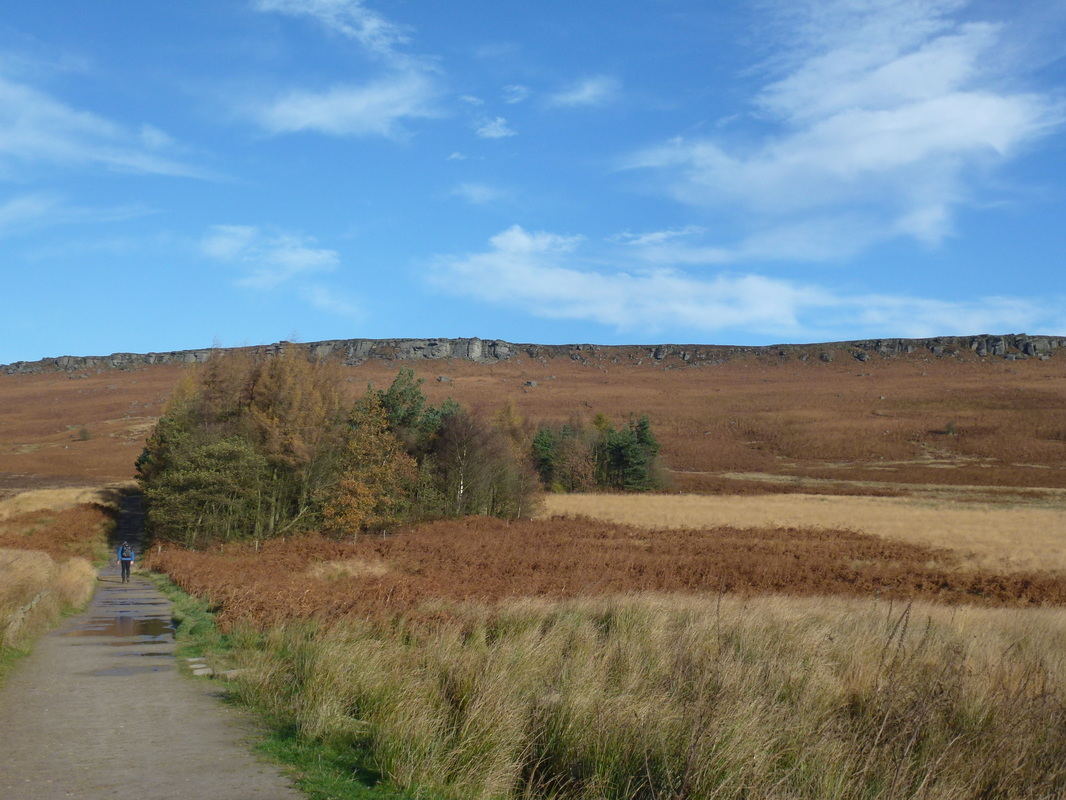 From Dennis Knoll the route heads towards Stanage Edge 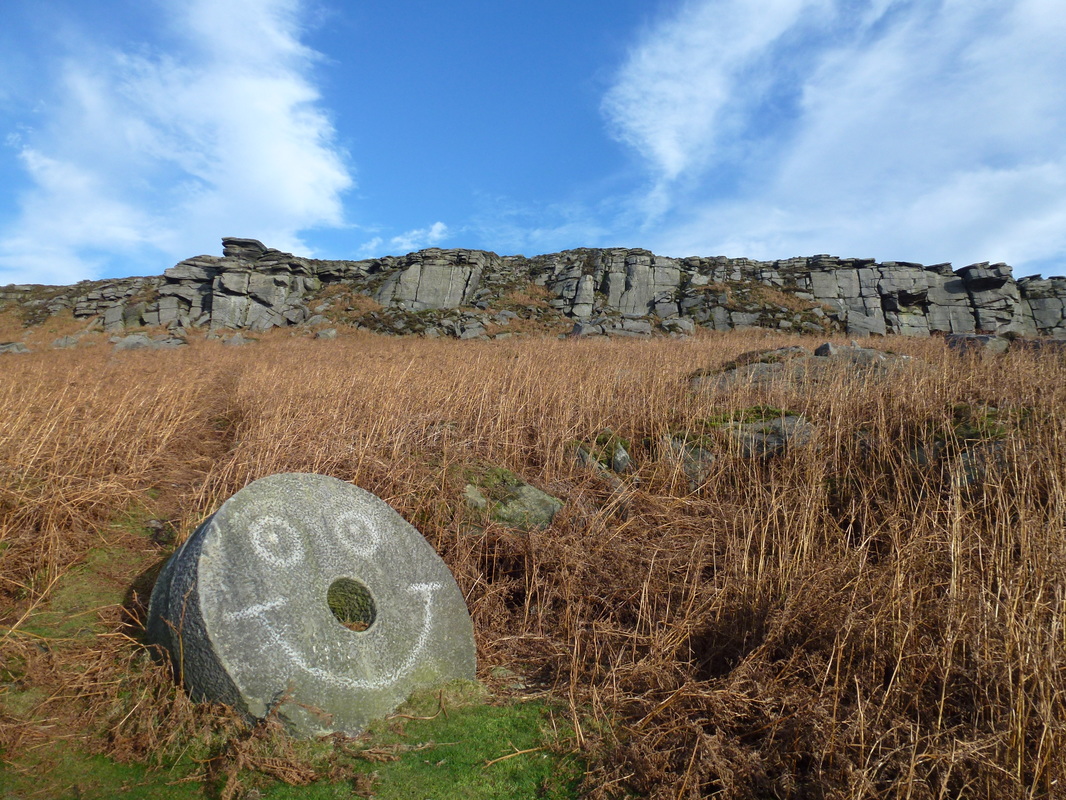 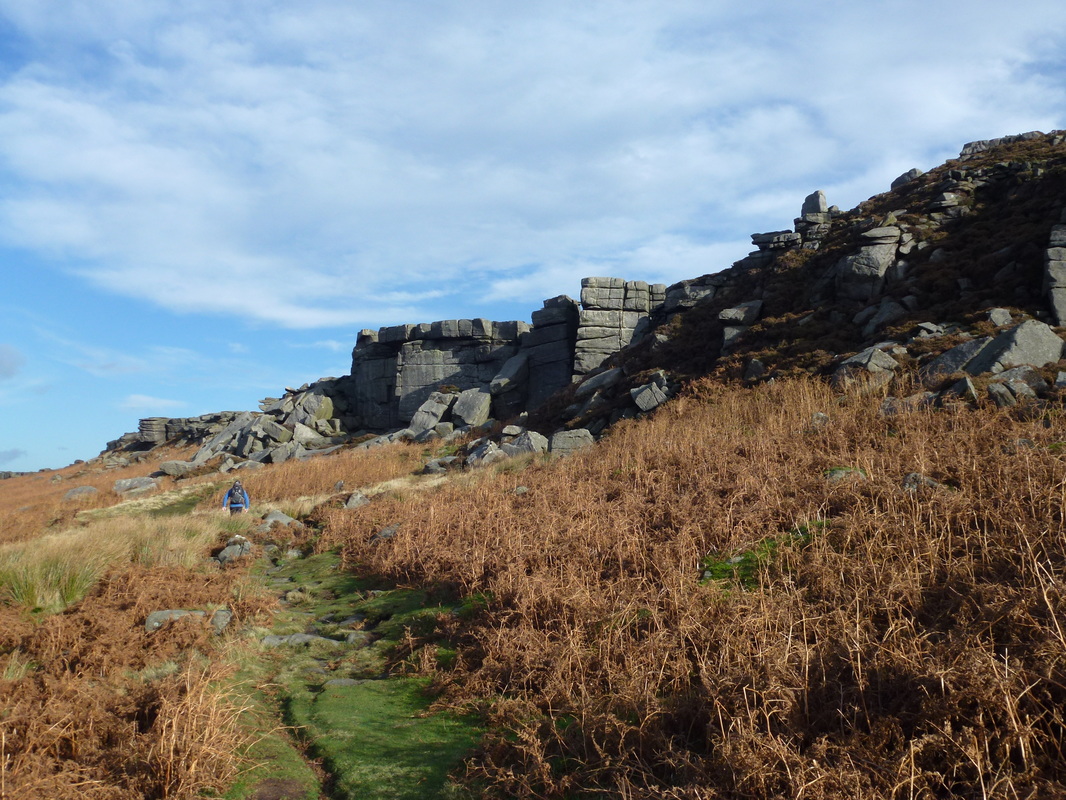 Heading along the good path below Stanage Edge 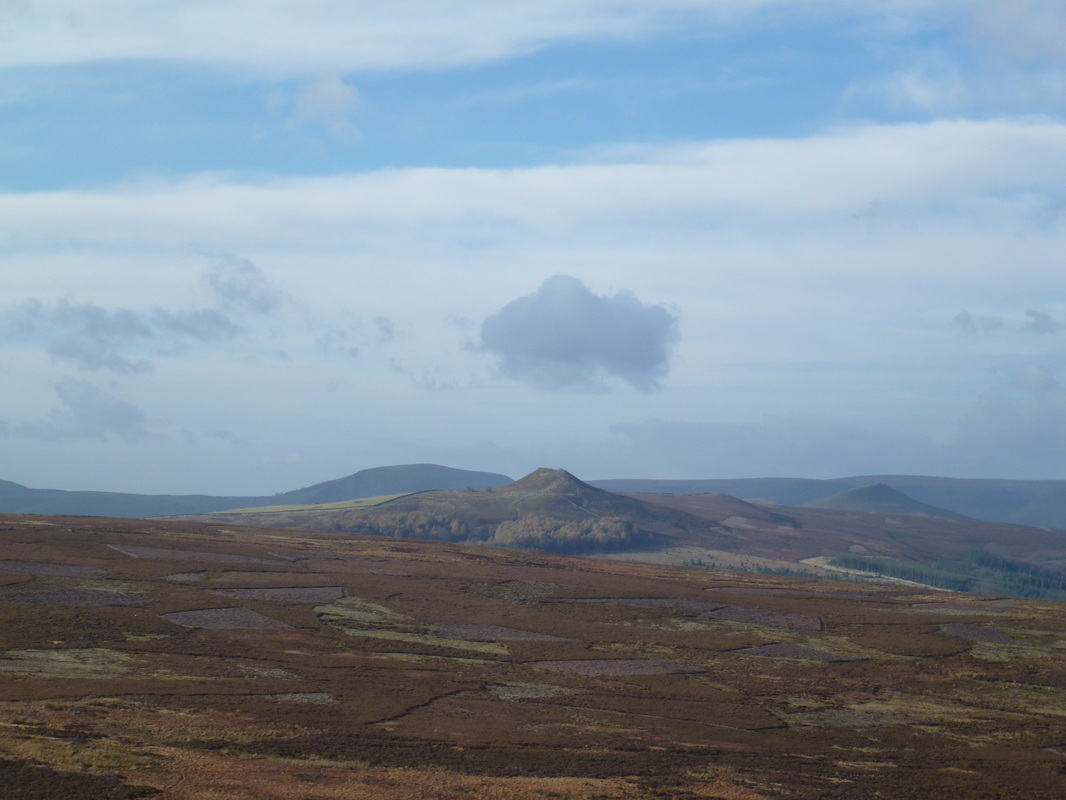 Win Hill in the centre of shot with Lose Hill to the right.  The Great Ridge looms in the background 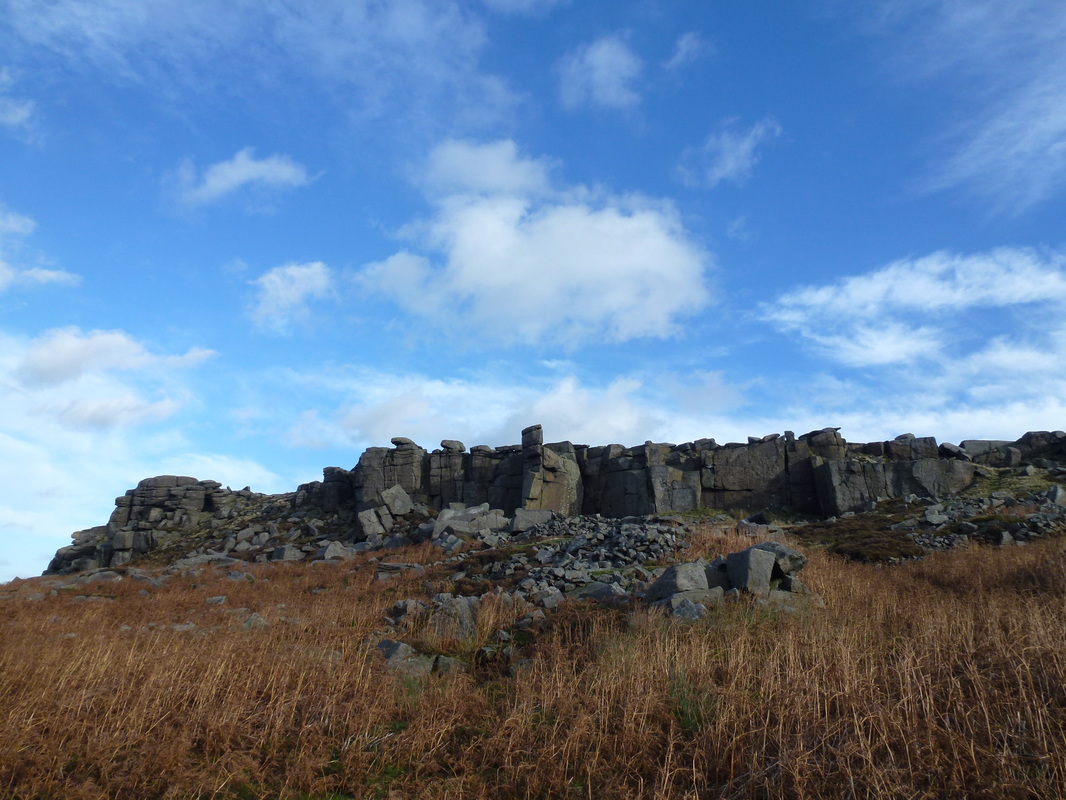 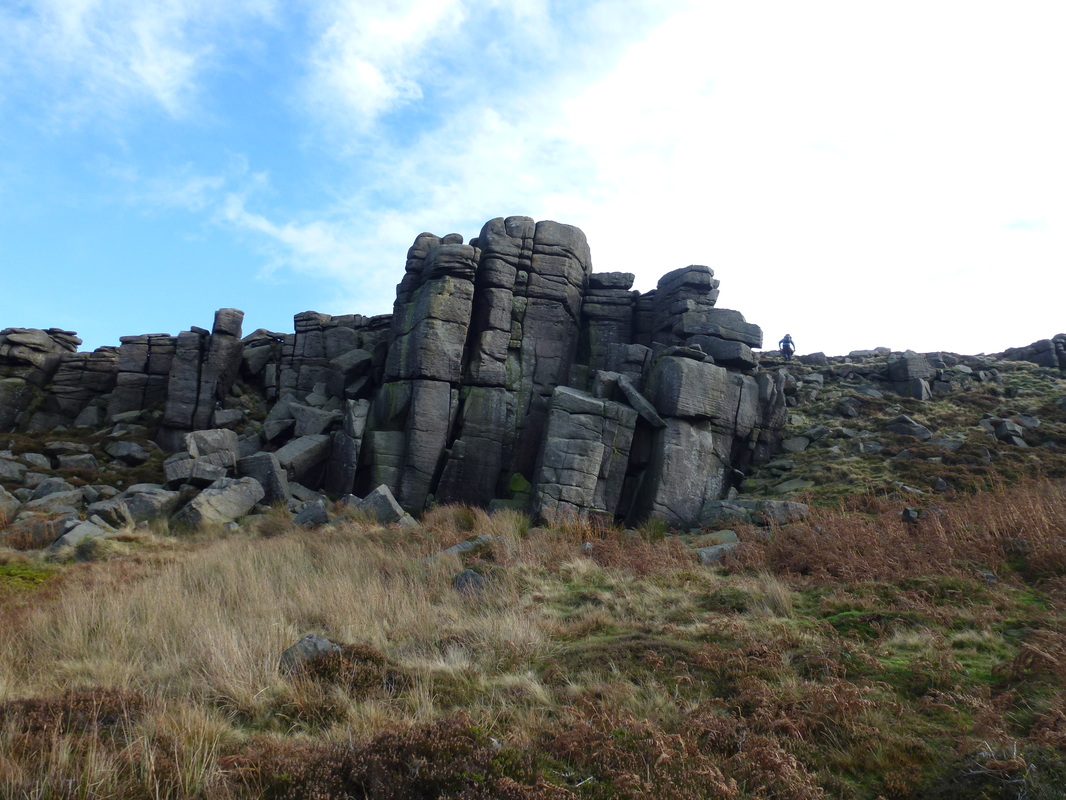 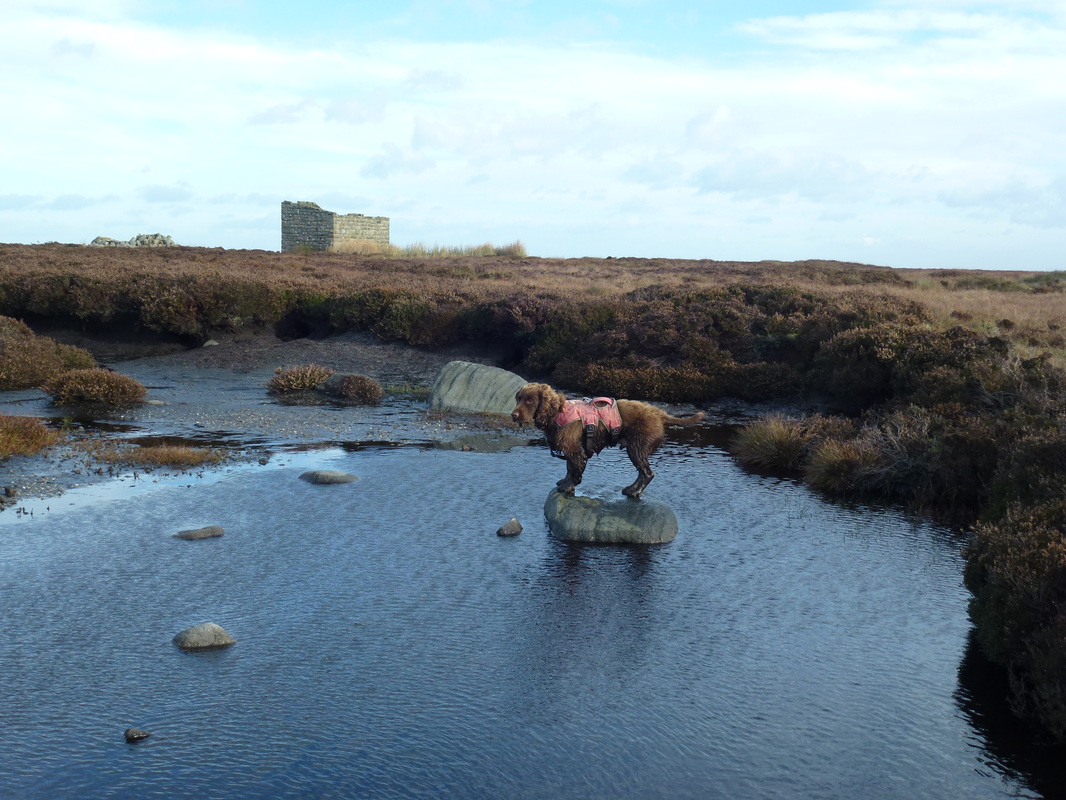 No dog is an island Fudge 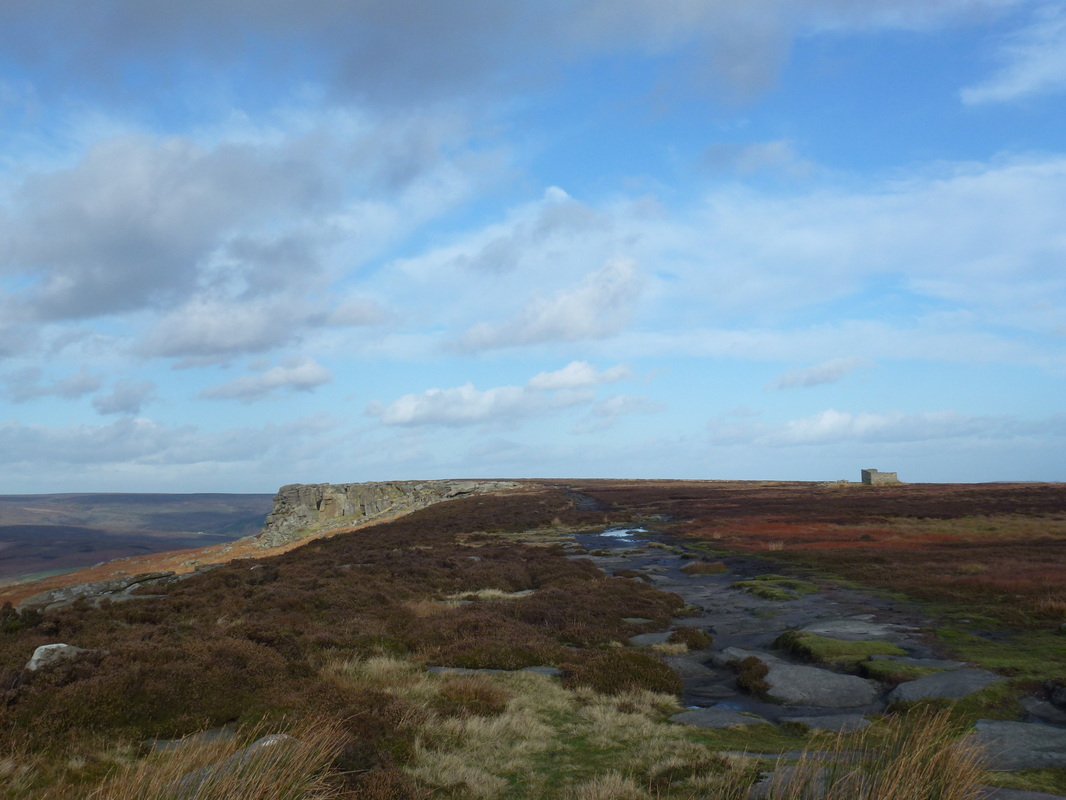 Looking back to Stanage End 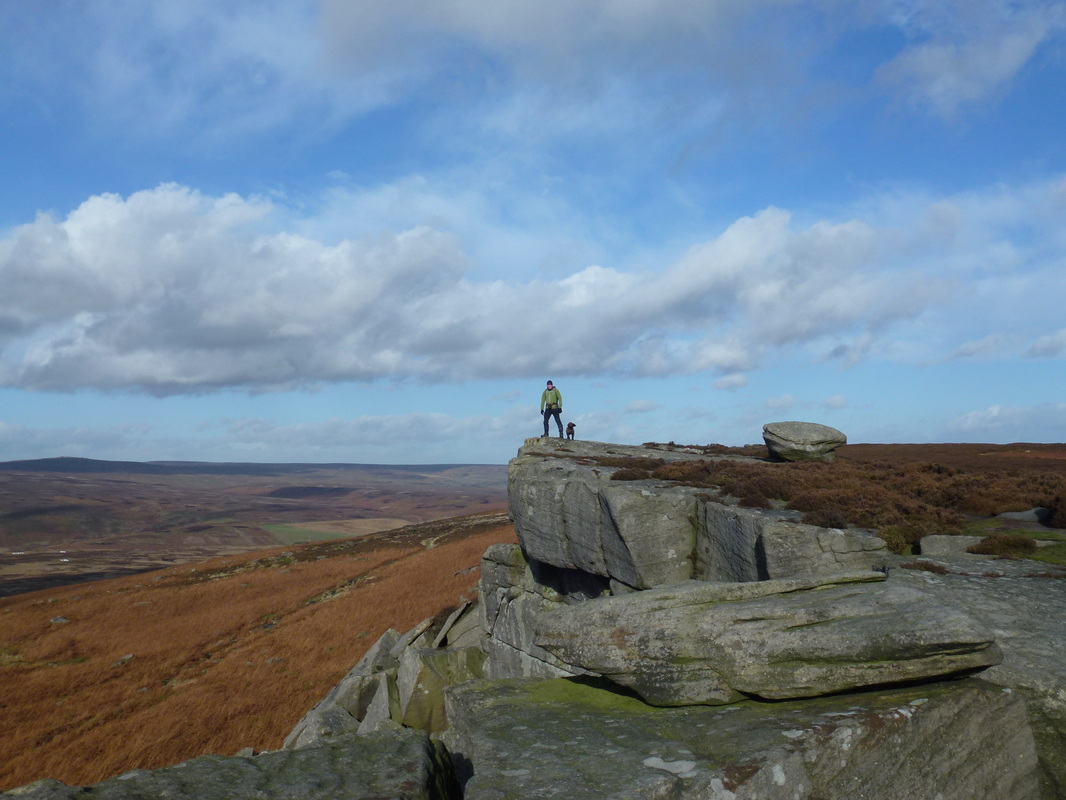 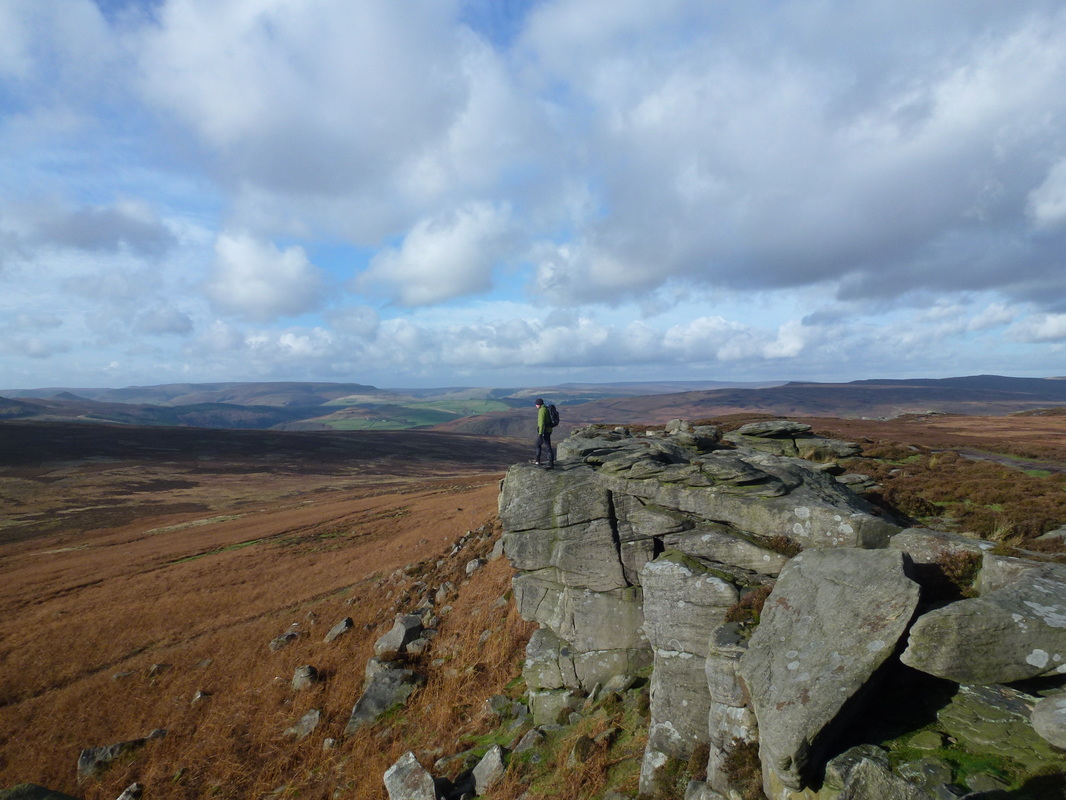 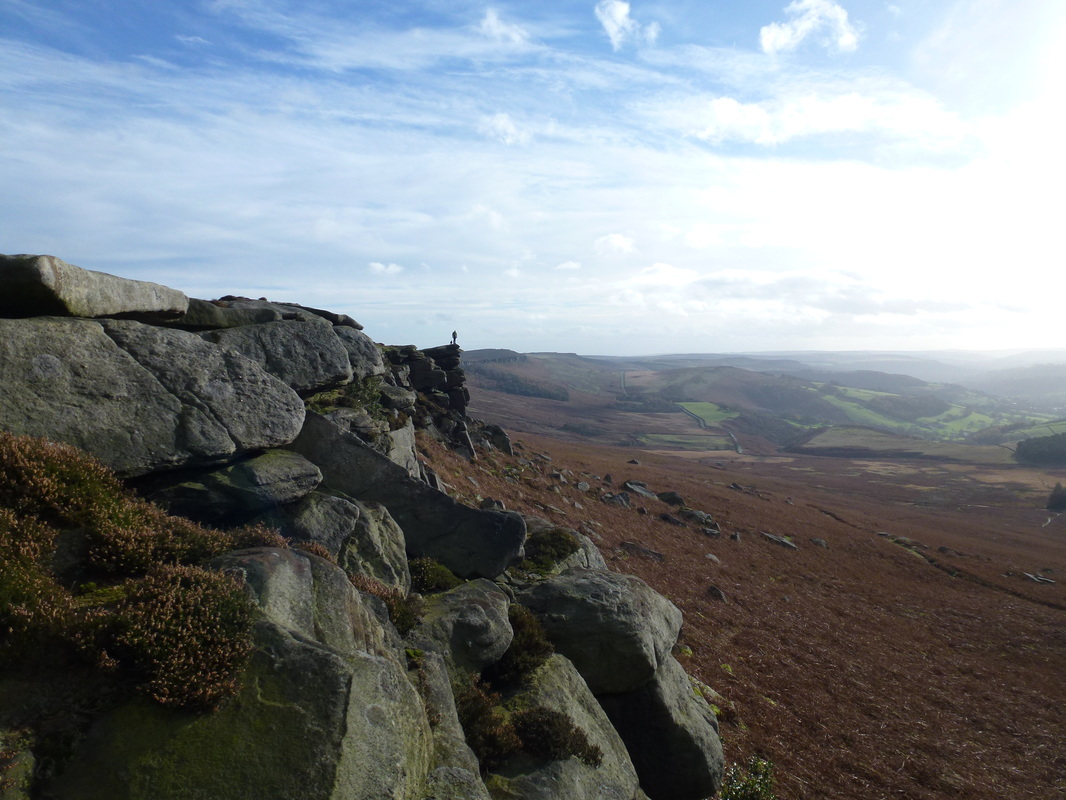 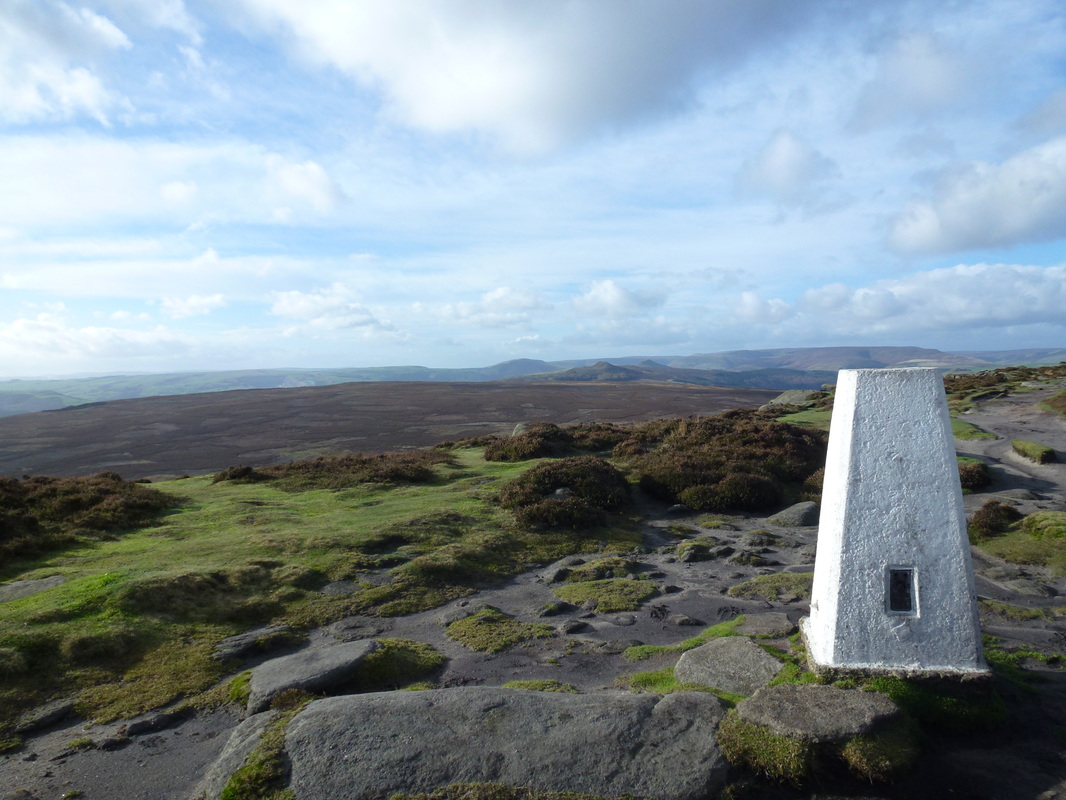 The Trig Point on High Neb 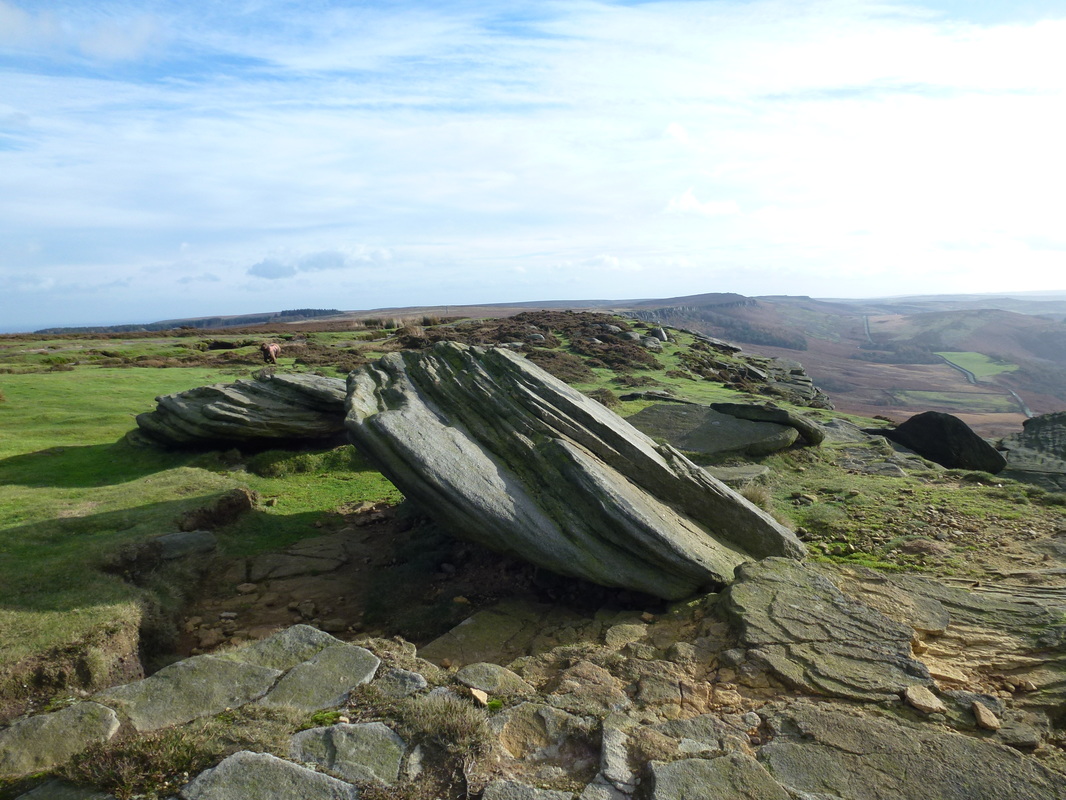 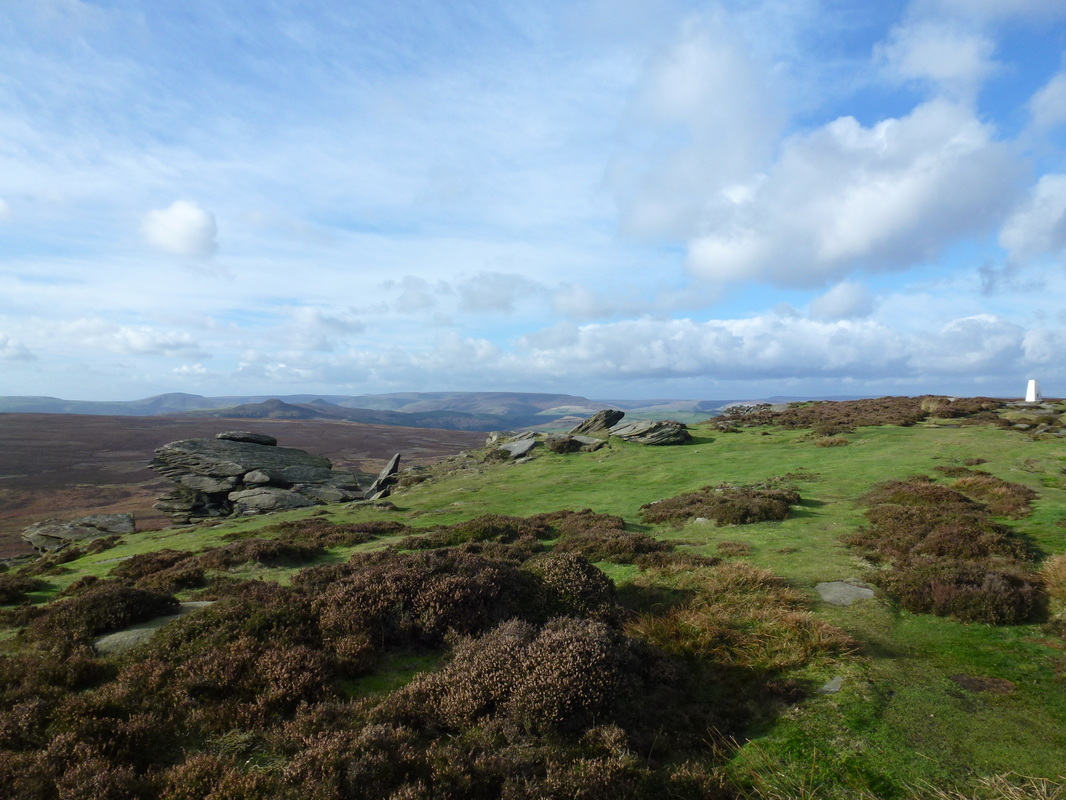 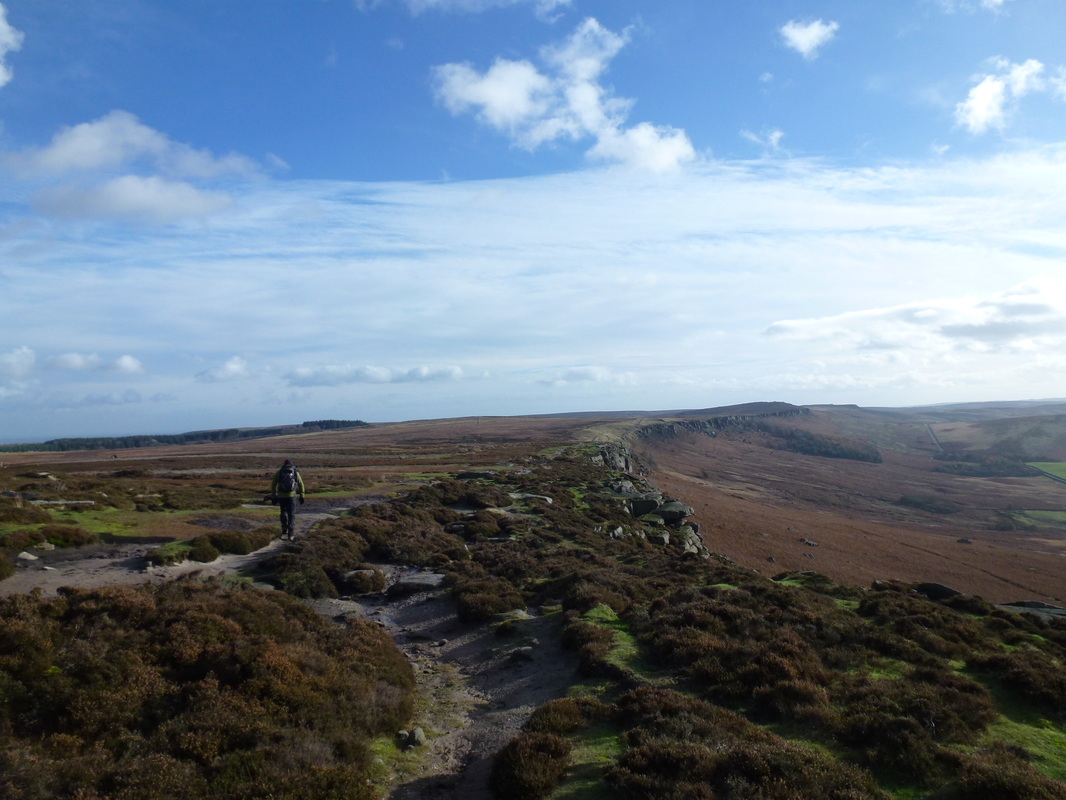 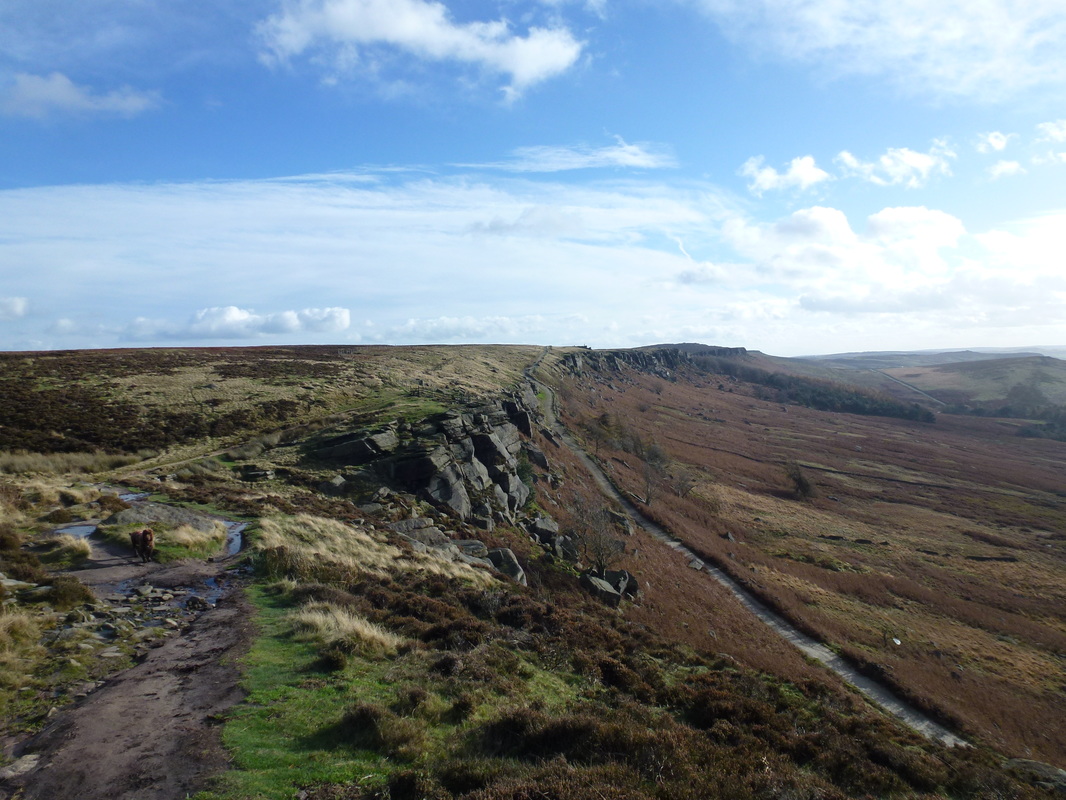 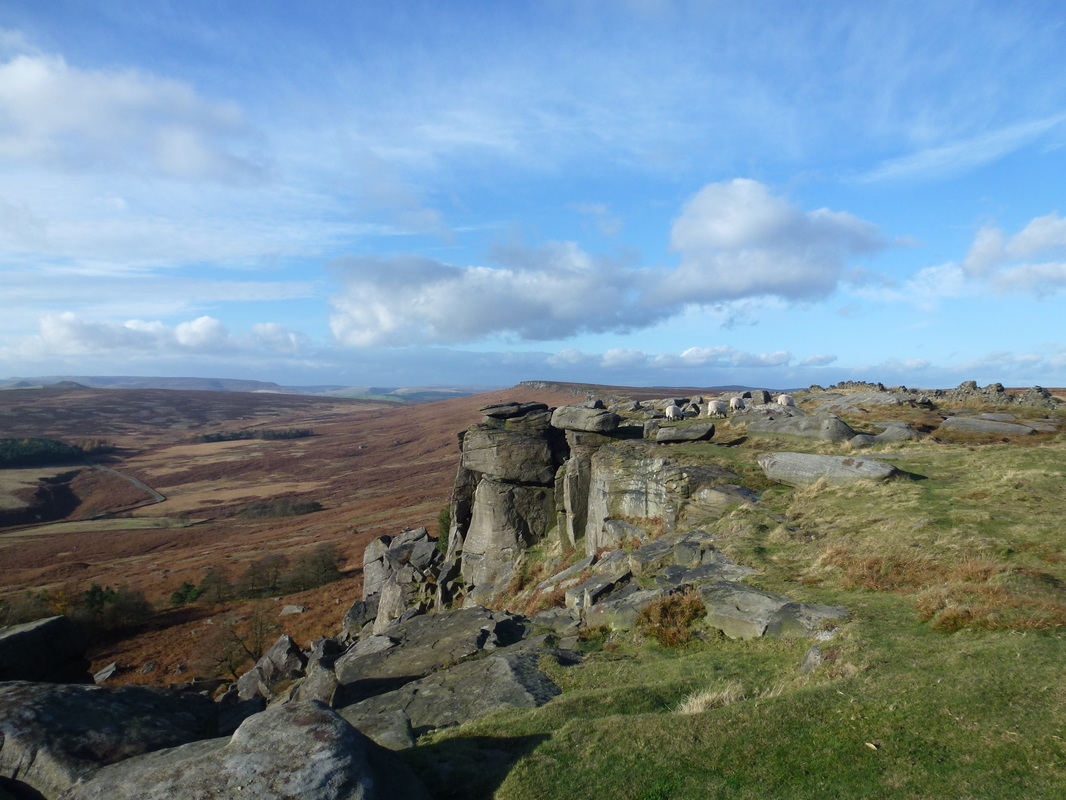 This area is clearly a rock climbers paradise 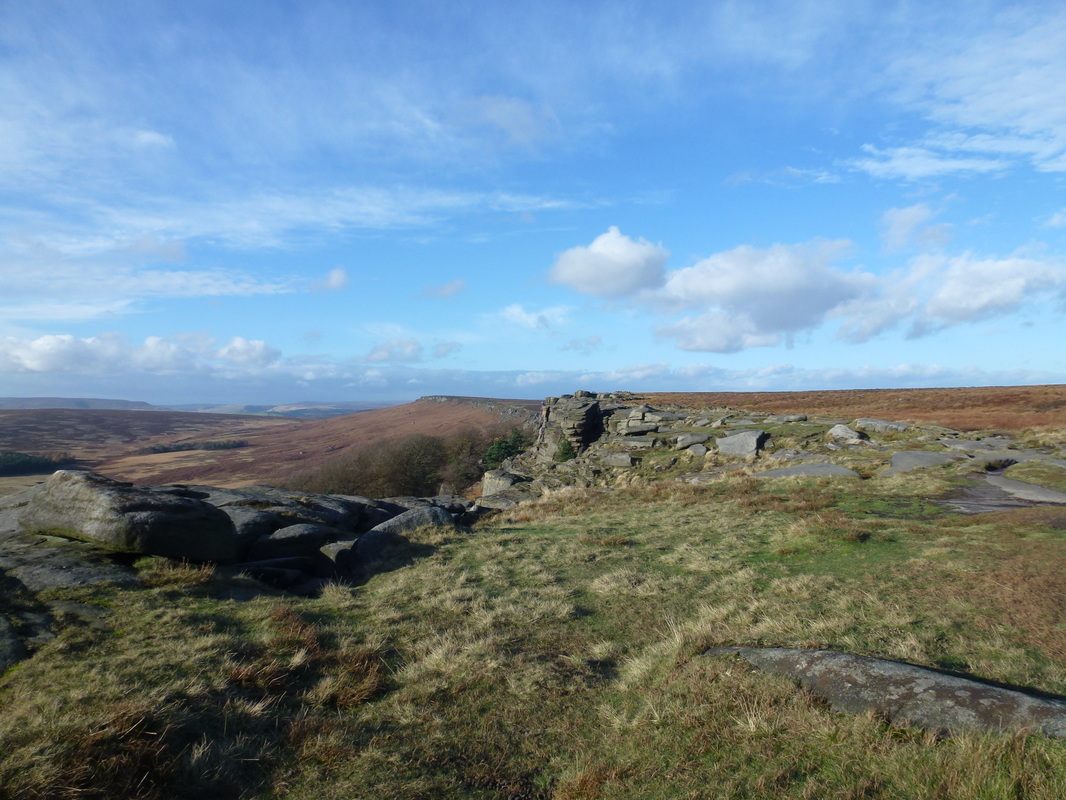 Looking back along Stanage Edge towards High Neb 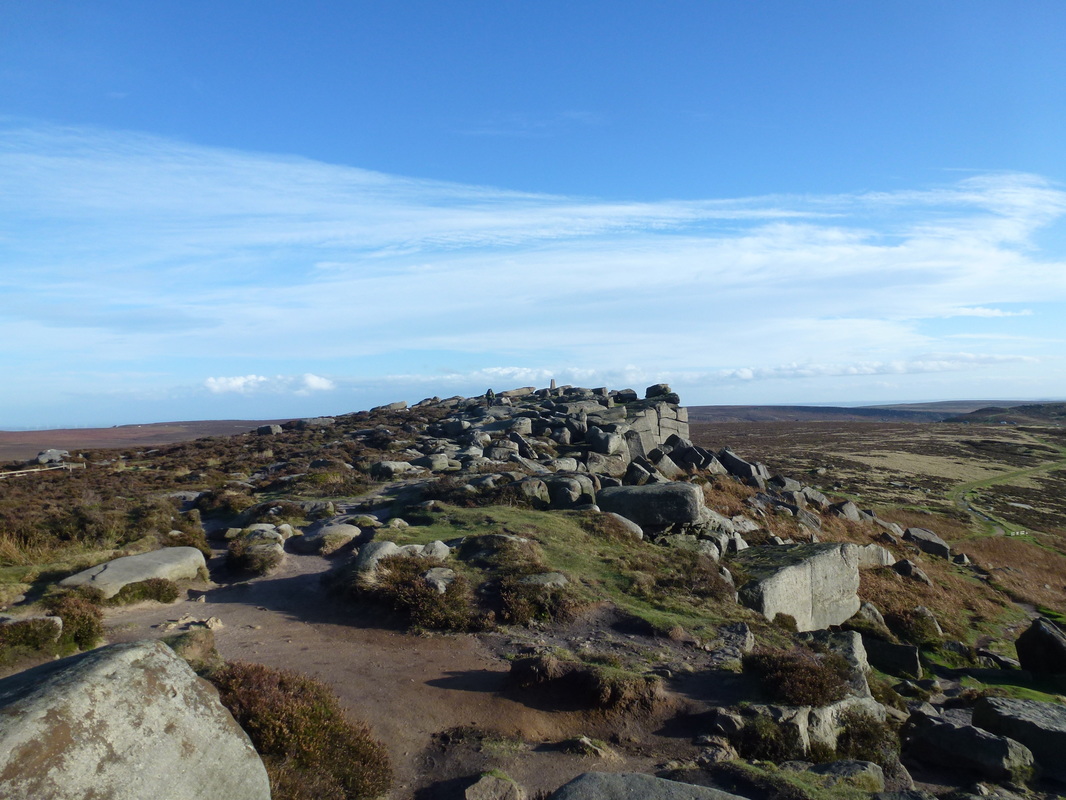 Approaching the Trig Point at Overstones 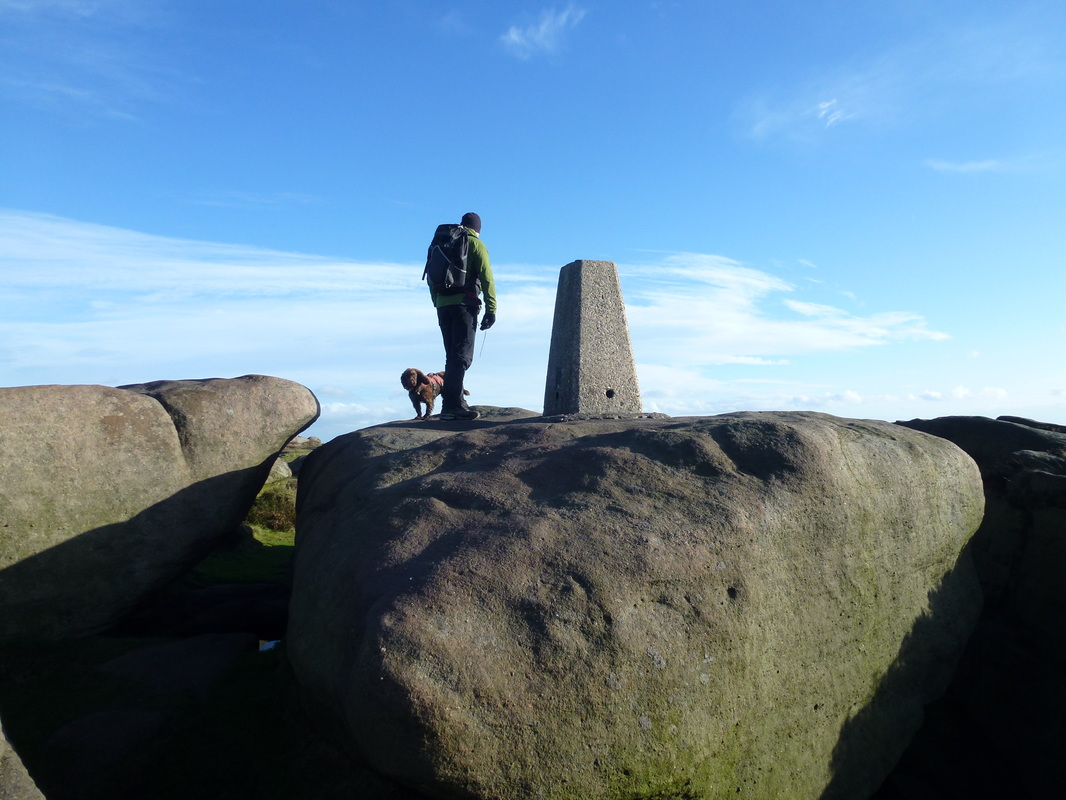 The Trig Point at Overstones - the wind had really started to pick up now....... 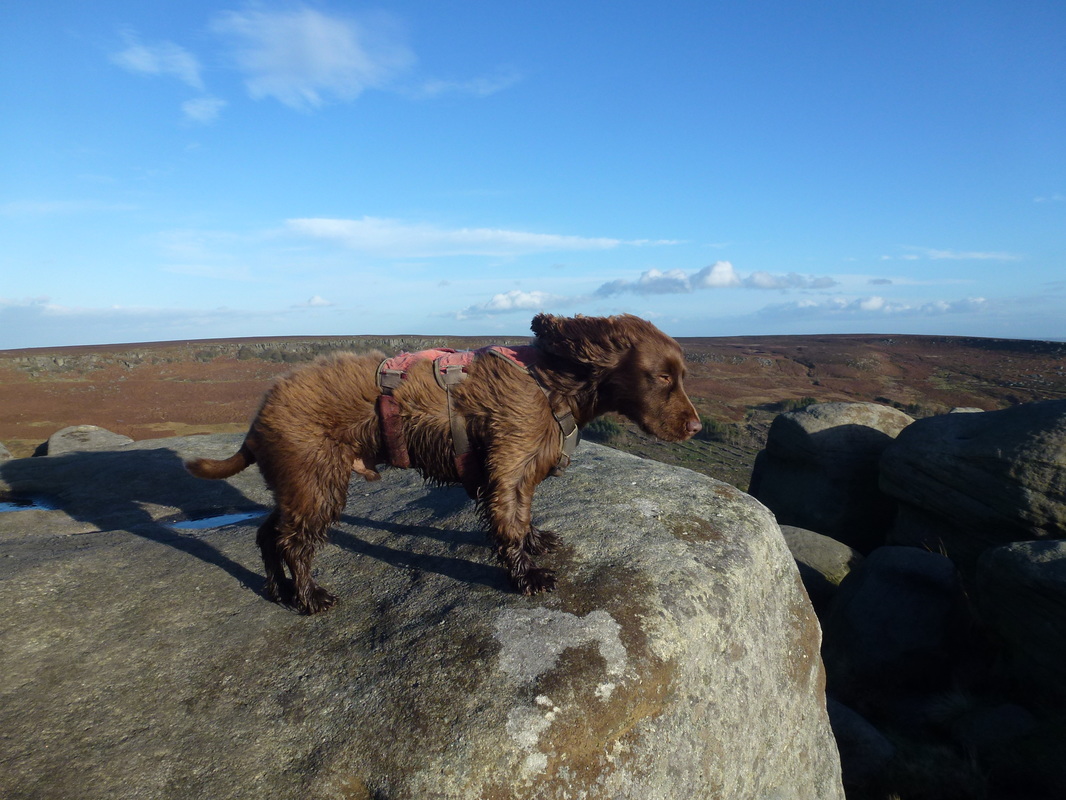 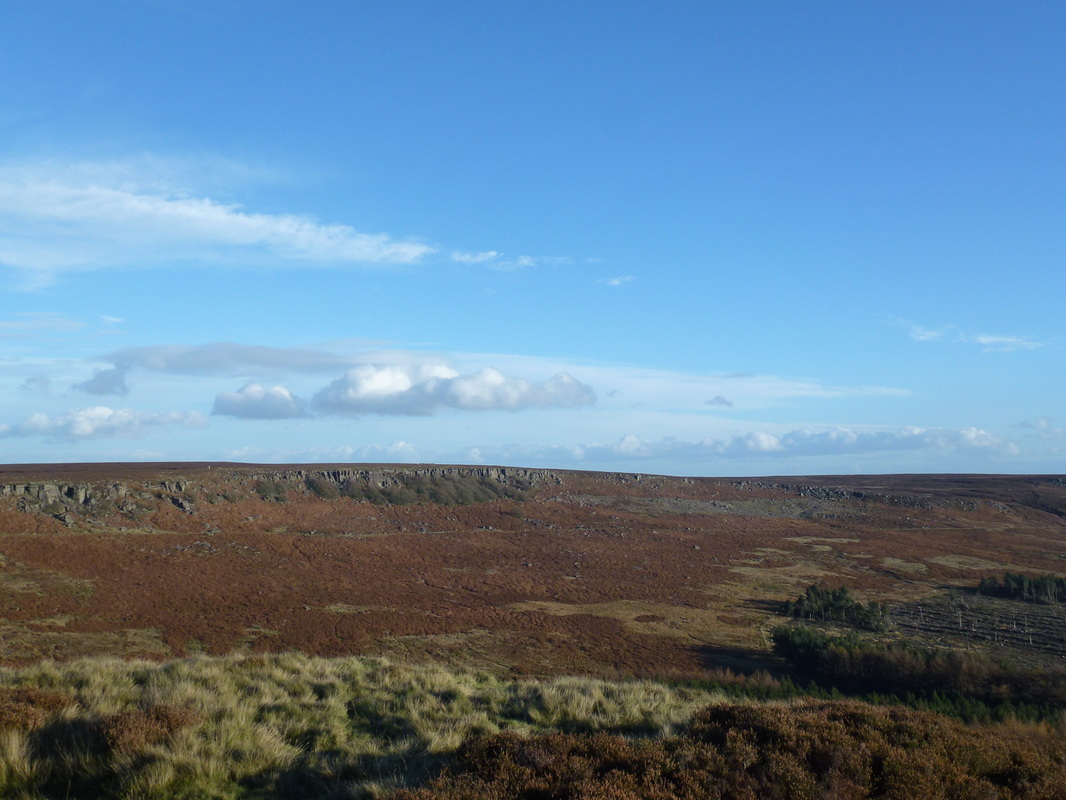 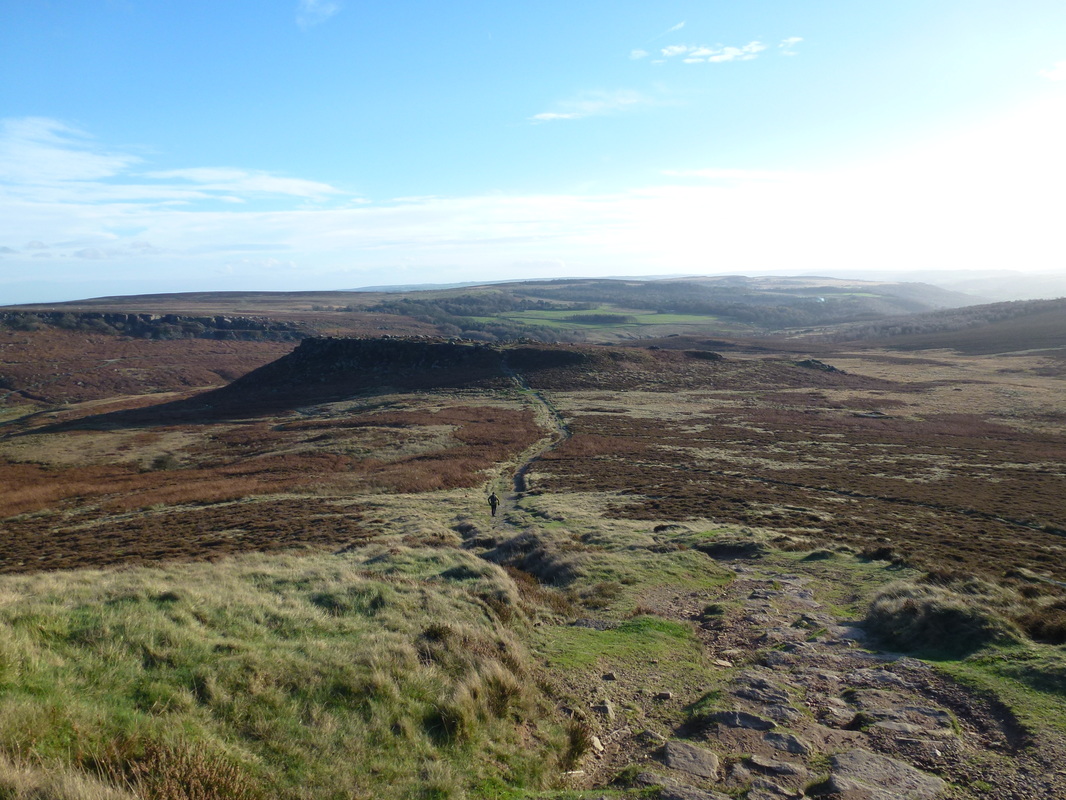 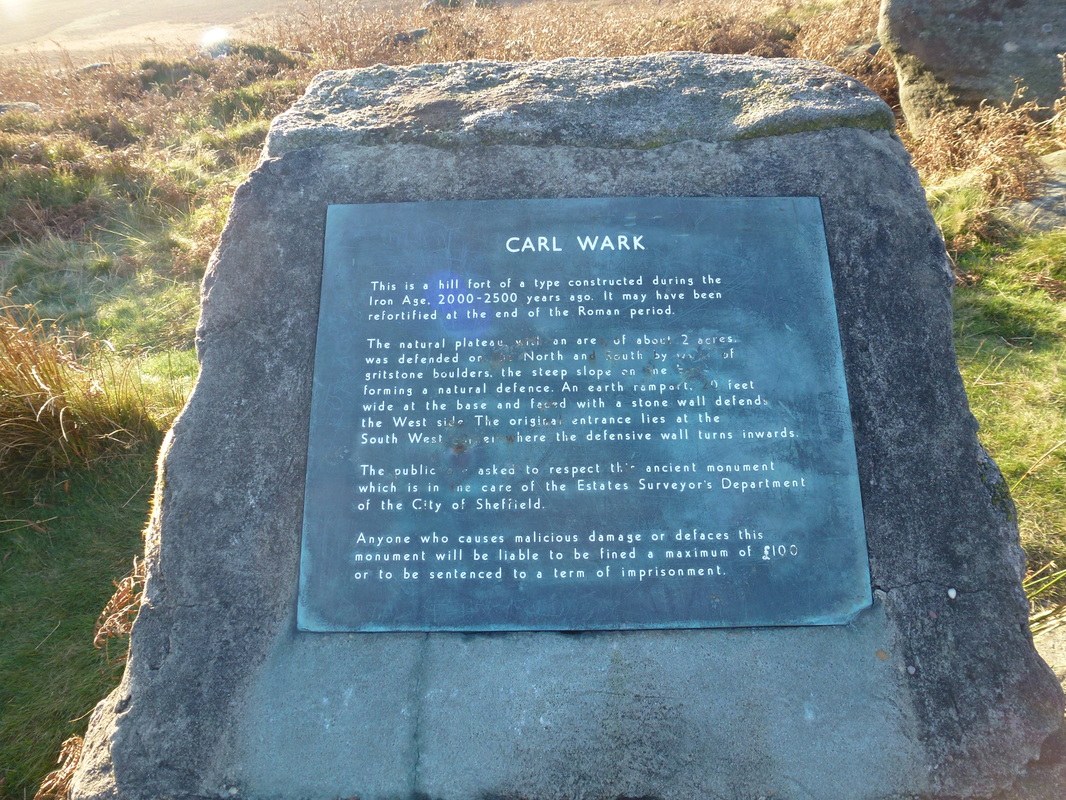 Saves me typing about Carl Wark - here it is 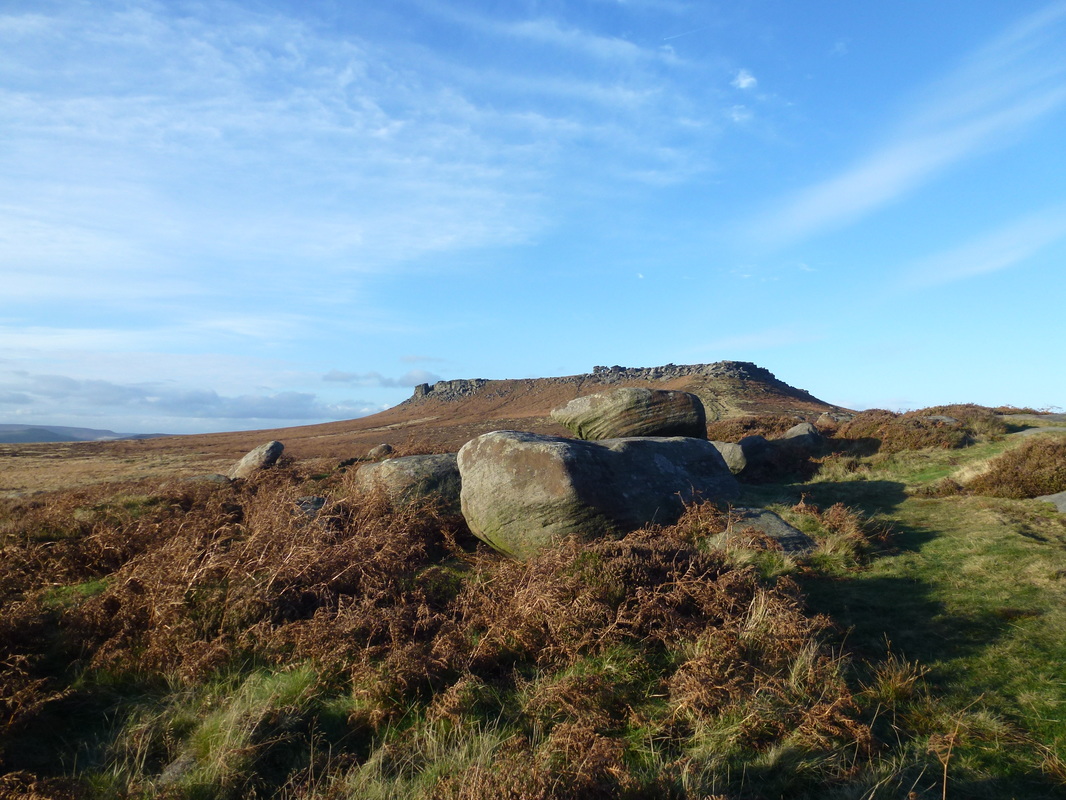