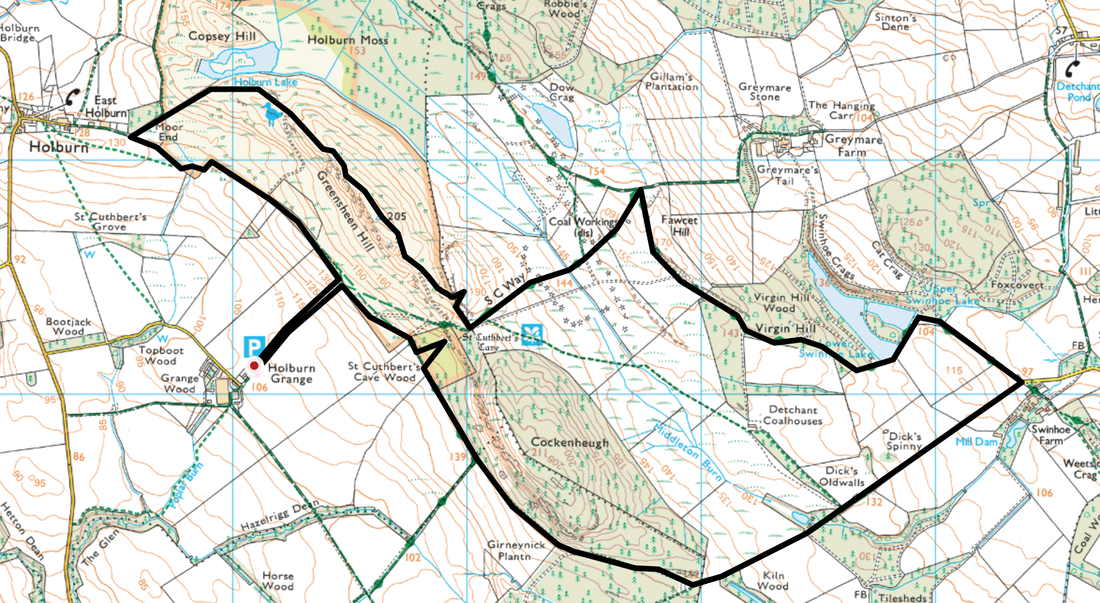 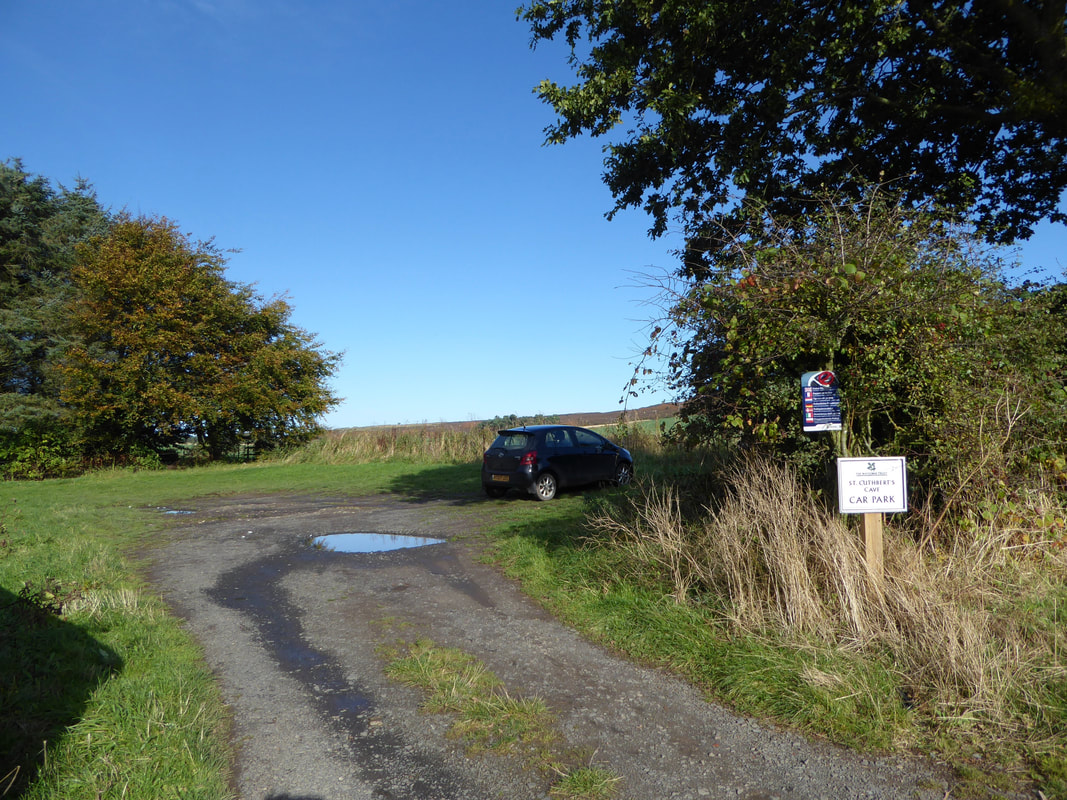 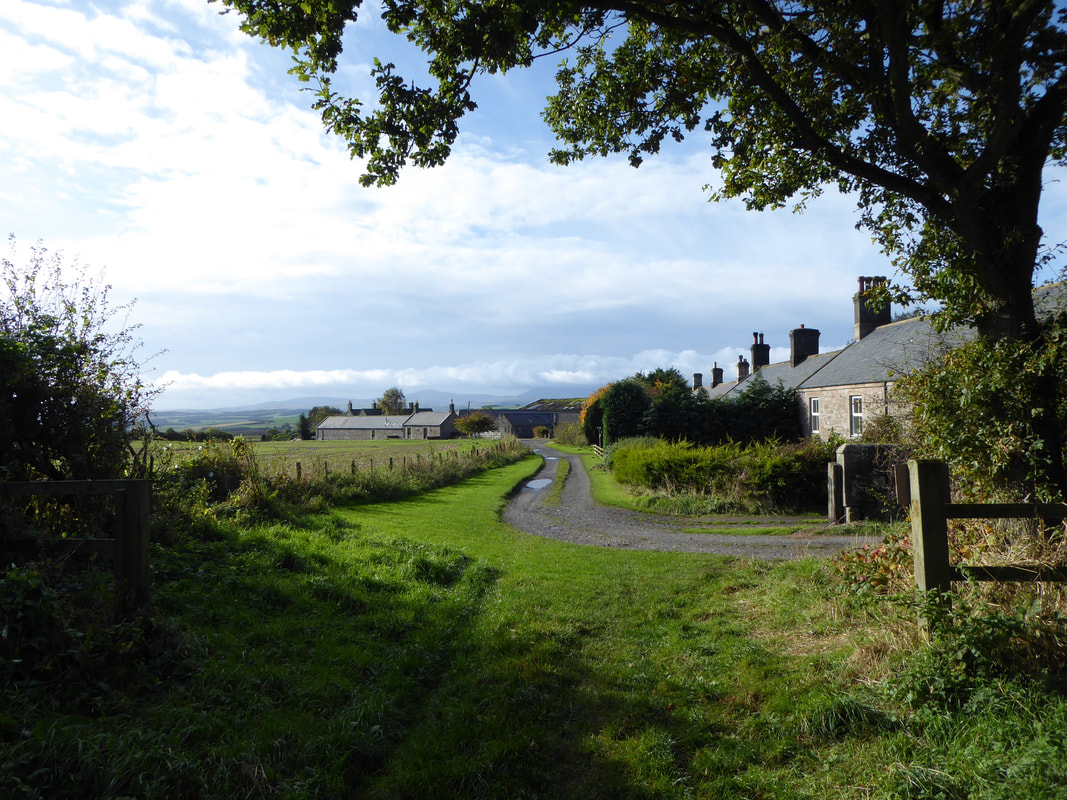 Looking back towards the farm buildings at Holburn Grange. The entrance to the Car Park is on the right. 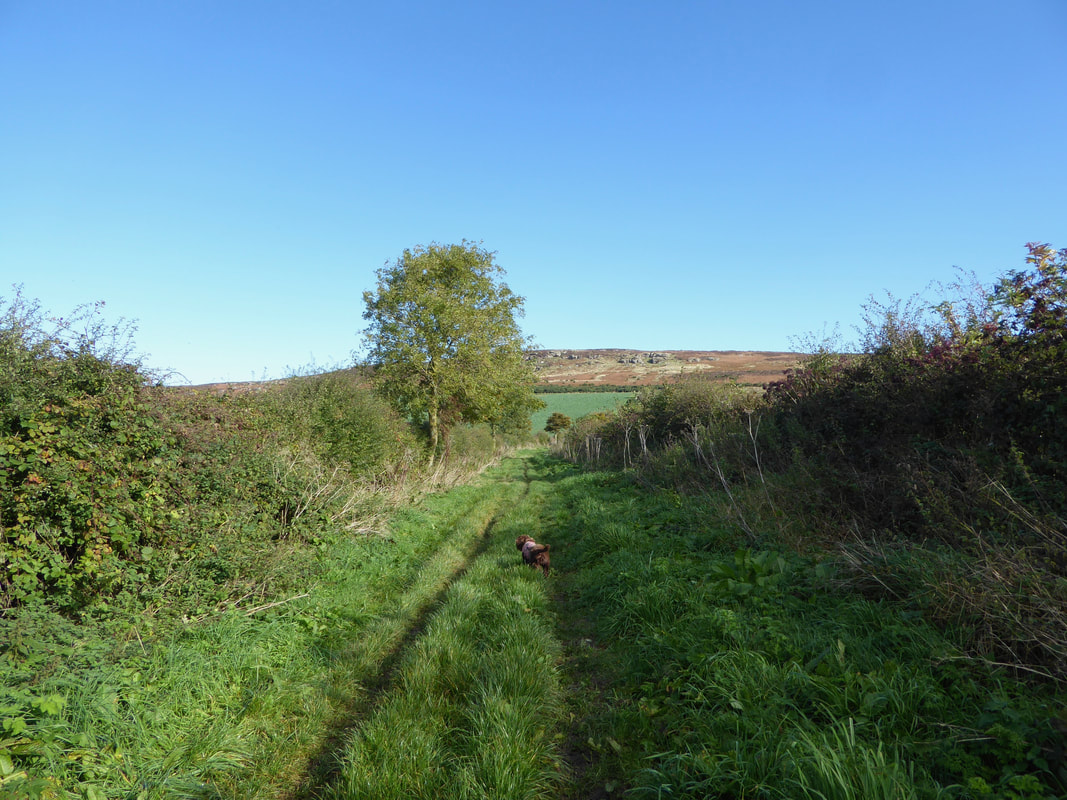 A grassy farm track heads north east from the Car Park. Greensheen Hill is directly ahead and this would form part of our return route. 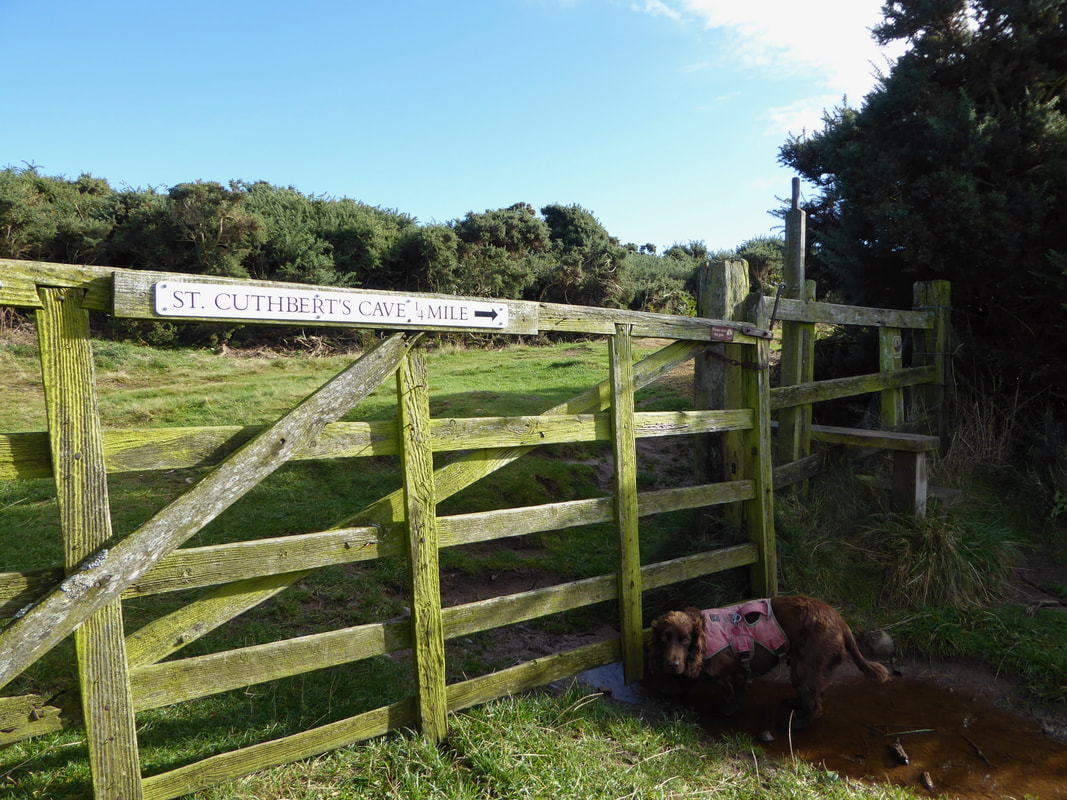 At the top of the grassy farm track a gated stile is reached - the sign is self explanatory.
Fudge bless him stands in the middle of a manky puddle and waits patiently for his manservant to open the gate for him. 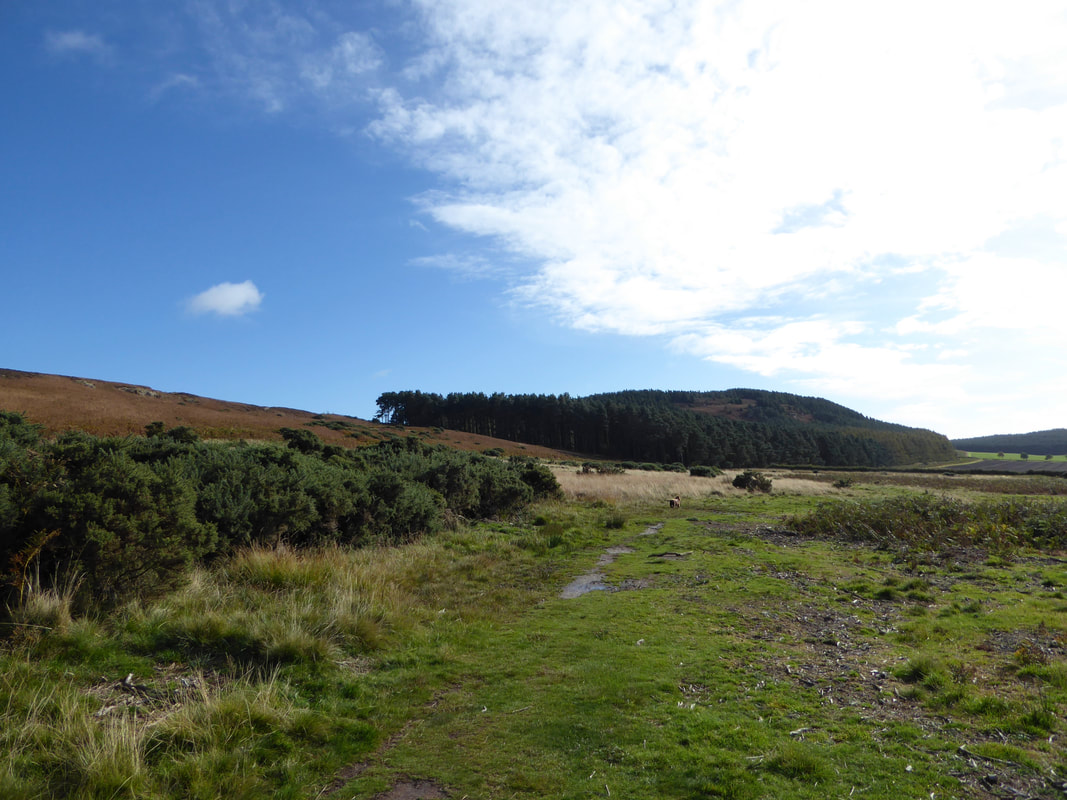 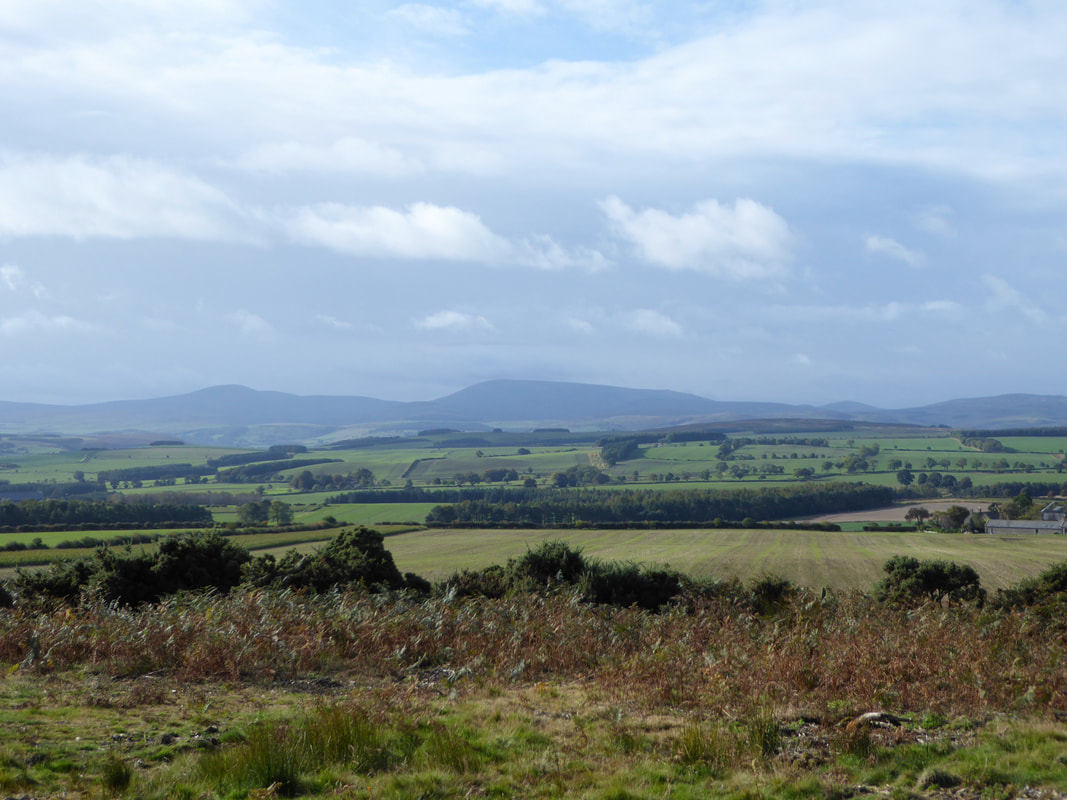 The Cheviots in the distance 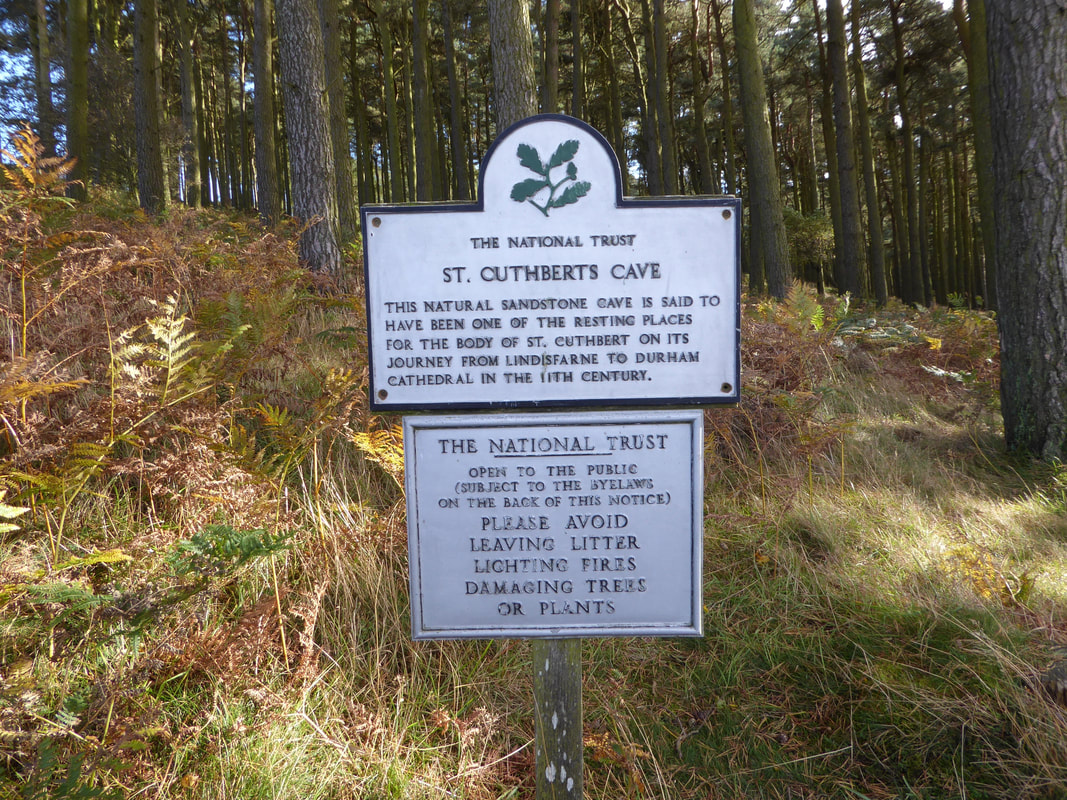 St Cuthbert (634 to 687AD) was an Anglo-Saxon saint of the early Northumbrian church in the Celtic tradition. He was a monk, bishop and hermit, associated with the monasteries of Melrose & Lindisfarne in what might loosely be termed the Kingdom of Northumbria. Following his death he became the most important medieval Saint of Northern England, with a cult centred on his tomb at Durham Cathedral. Cuthbert is regarded as the patron saint of Northumbria. 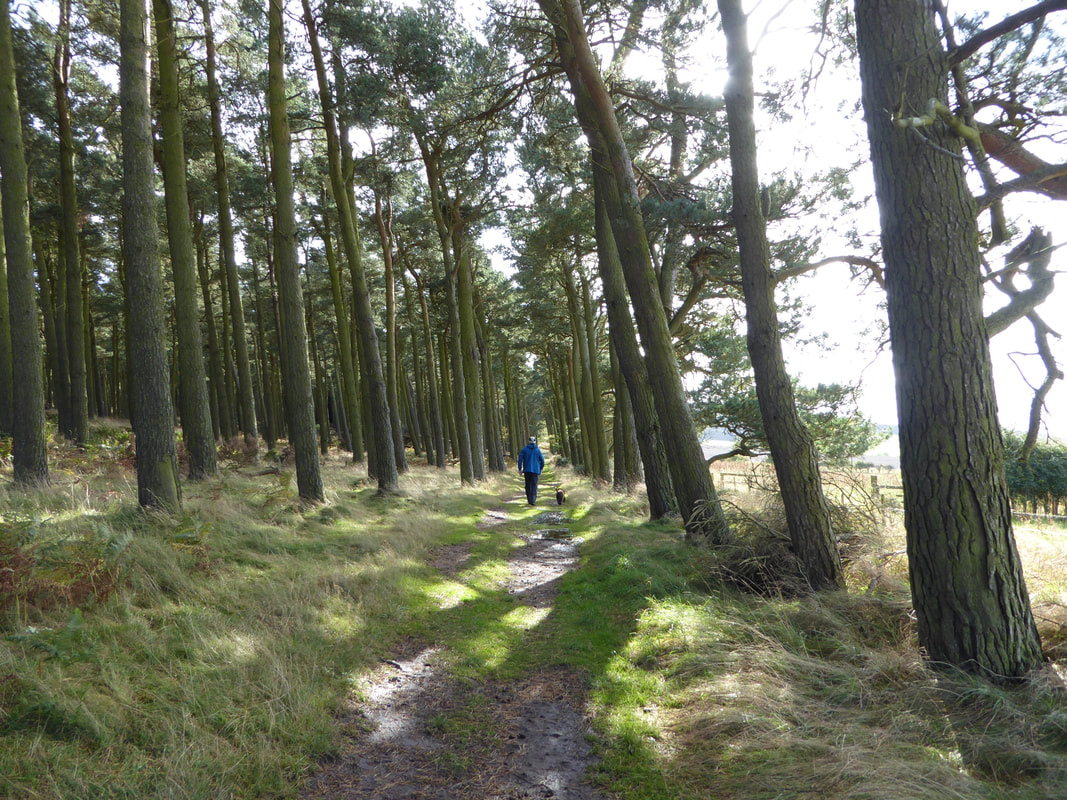 The route heads along the western edge of St Cuthbert's Cave Wood where in a few yards an obvious path leads up to the cave.
We were now on the official route of The St Cuthbert's Way. 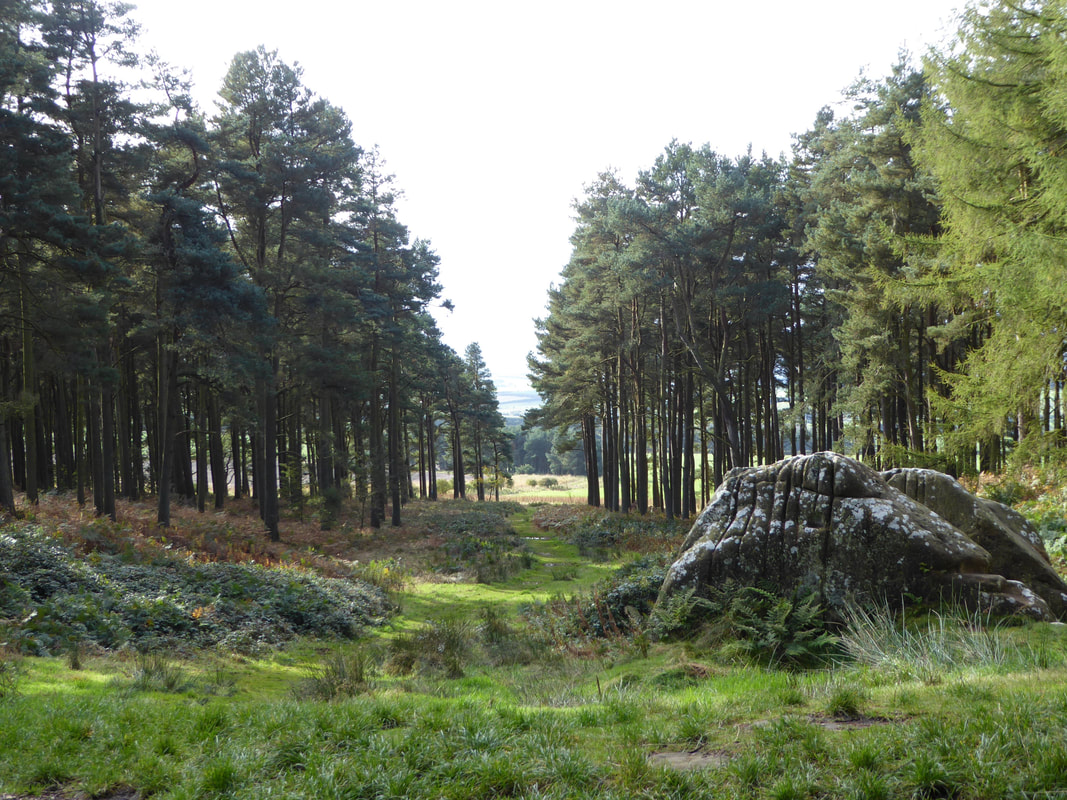 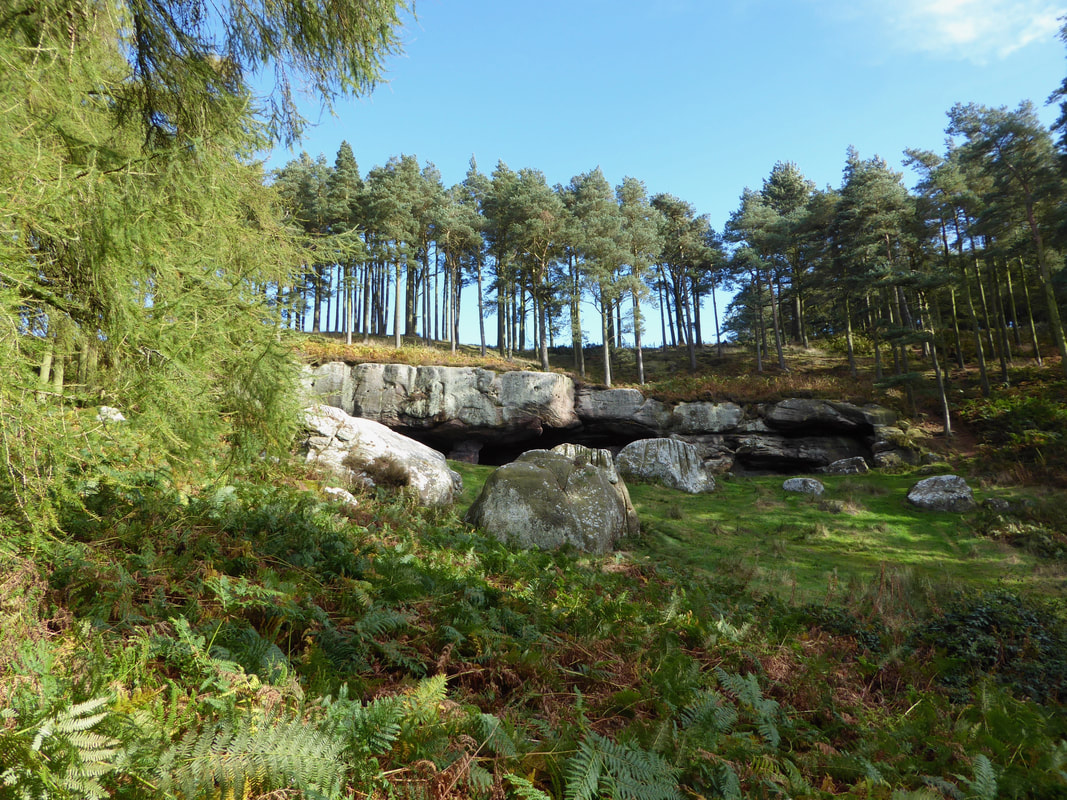 Our first view of St Cuthbert's Cave, an overhanging edge of Sandstone rock supported by an isolated pillar of stone 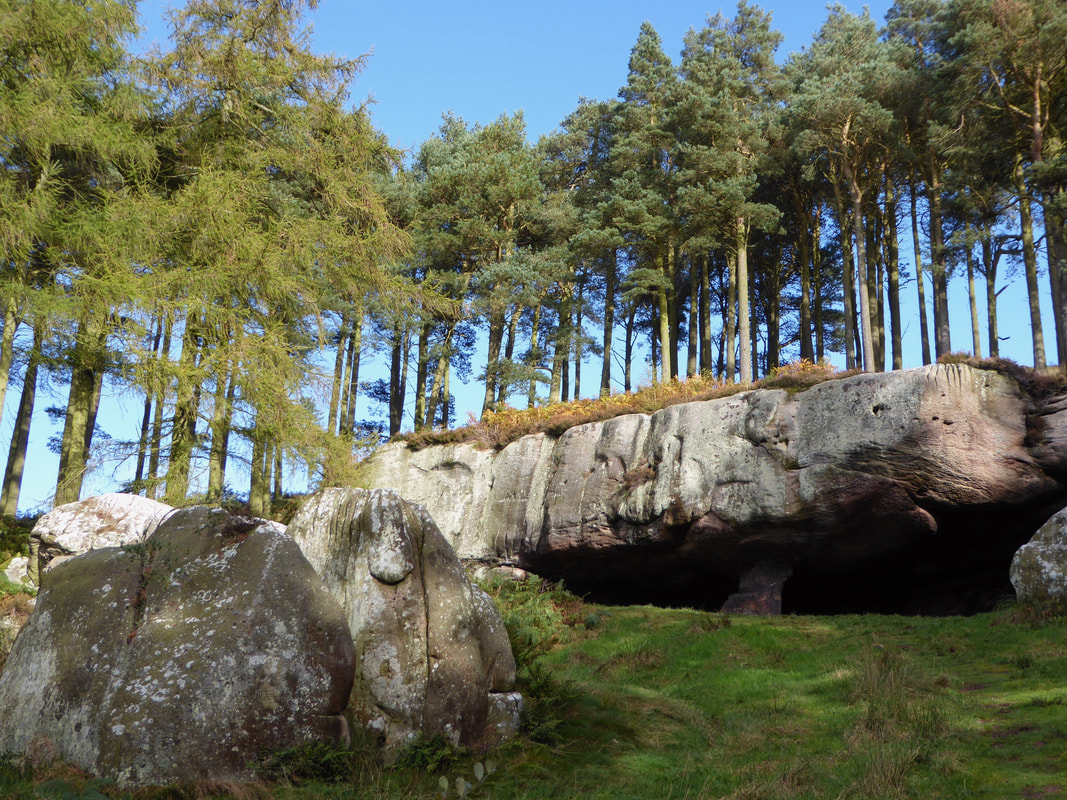 St Cuthbert died on March 20th 687AD on Inner Farne which is the westernmost of the Farne Islands​. His body was brought back and buried on Lindisfarne but it is fair to say that was not the end of the story with regard to his internment. The monks of Lindisfarne waited 11 years for the celebration of "Elevation" to Cuthbert's sainthood and on opening his coffin found not a skeleton but a perfectly preserved and 'uncorrupted' body. This proved to the monks that St Cuthbert had every right to be proclaimed a Saint. However in 793 the Vikings attacked and the monks lived under their rule until 875 when, with the monastery abandoned they fled with St Cuthbert's body as well as other relics & treasures to the mainland. It was whilst making the journey that the monks are thought to have rested in the cave. The final resting place of St Cuthbert's body is at Durham Cathedral. 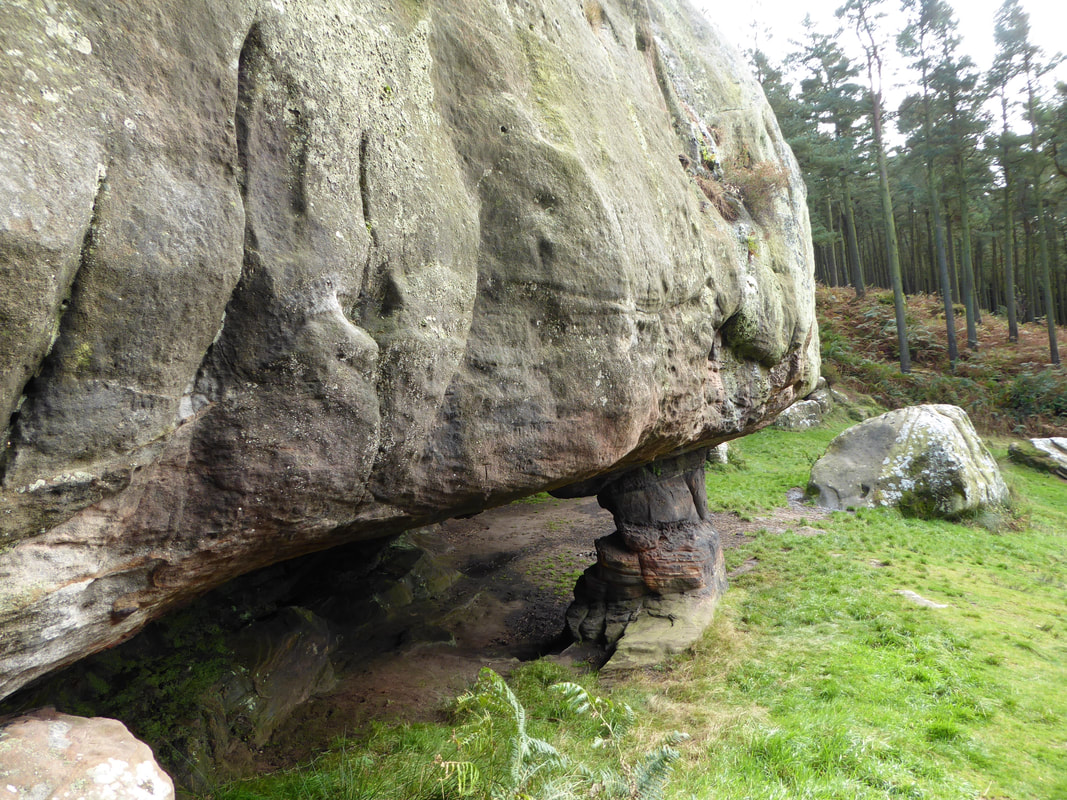 The solitary piece of stone supporting the overhanging Sandstone of St Cuthbert's Cave.
The cave was featured during an episode of "Vera" starring Brenda Blethyn (Tuesday’s Child, Series 6, episode 2) 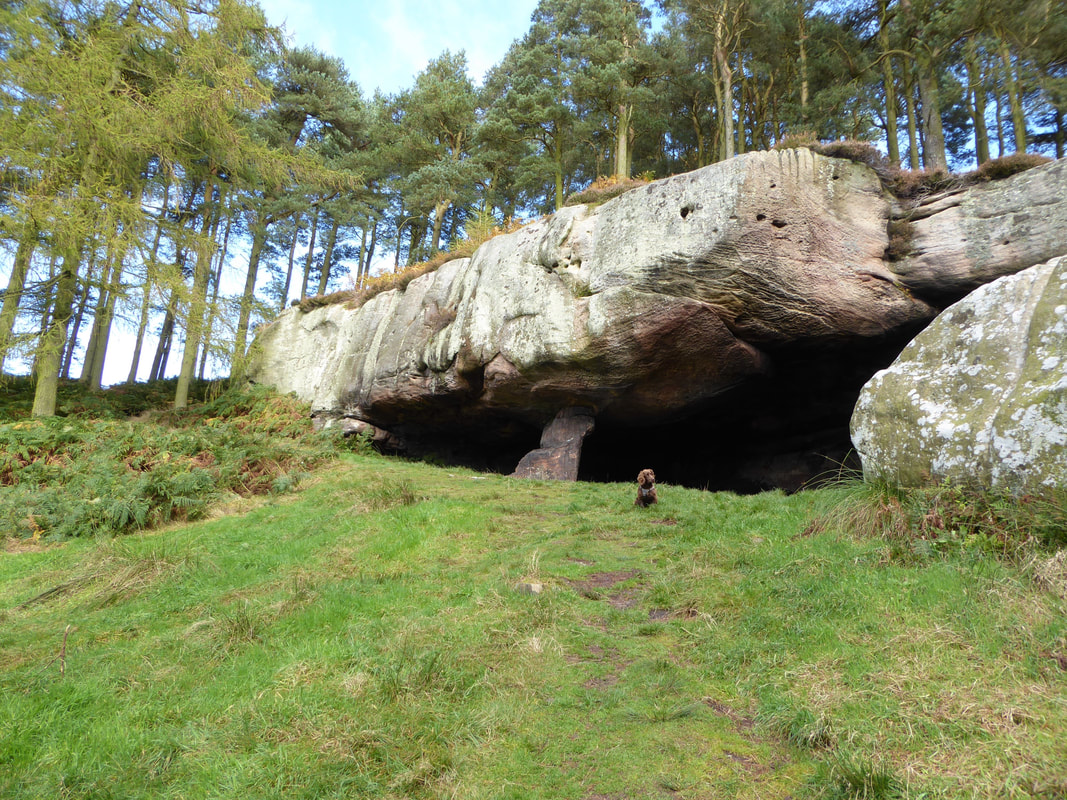 A panorama of St Cuthbert's Cave 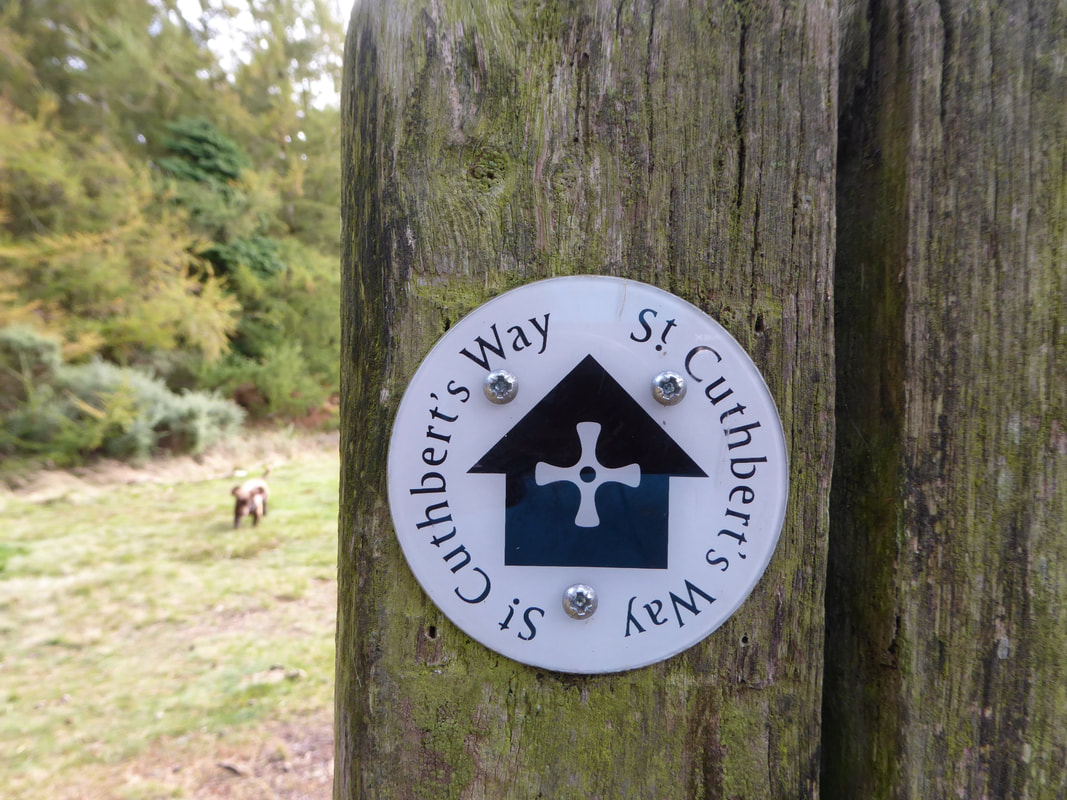 From the cave we made our way back to the western edge of St Cuthbert's Cave to rejoin The St Cuthbert's Way but only for a quarter of a mile.
This 62.5 mile walk links Melrose in the Scottish Borders, where St. Cuthbert started his religious life in 650AD, with Holy Island (Lindisfarne) off the Northumberland Coast, his eventual resting place until 875AD. 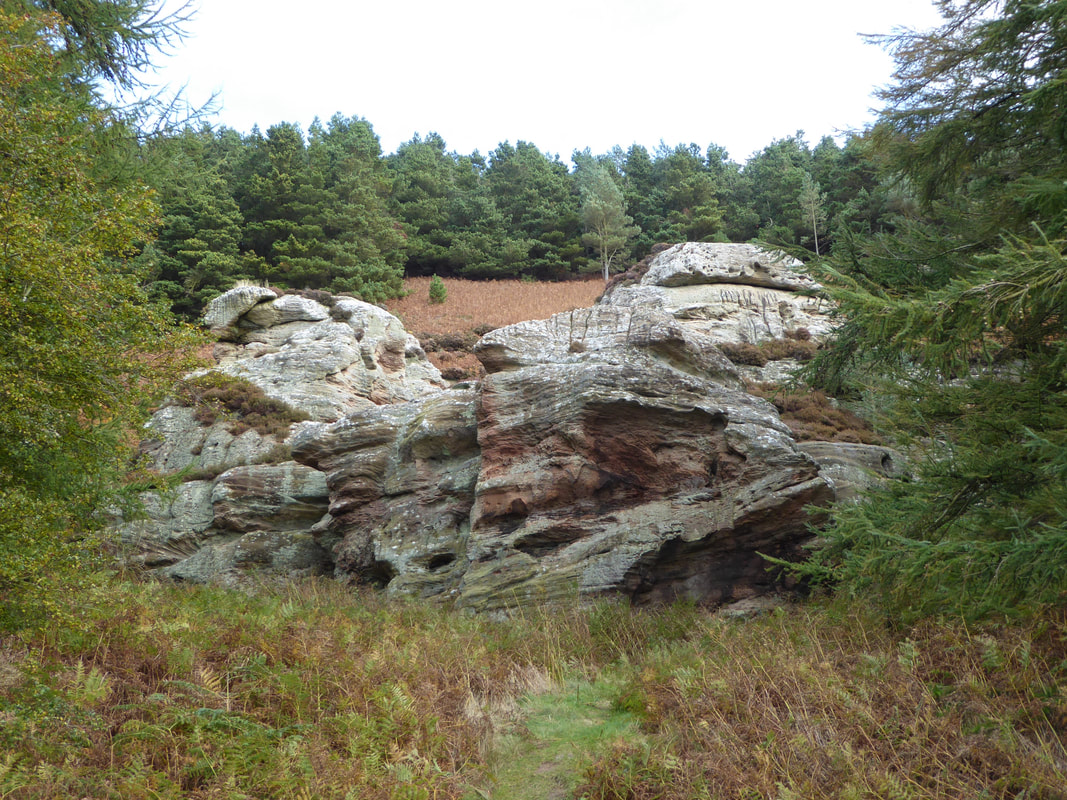 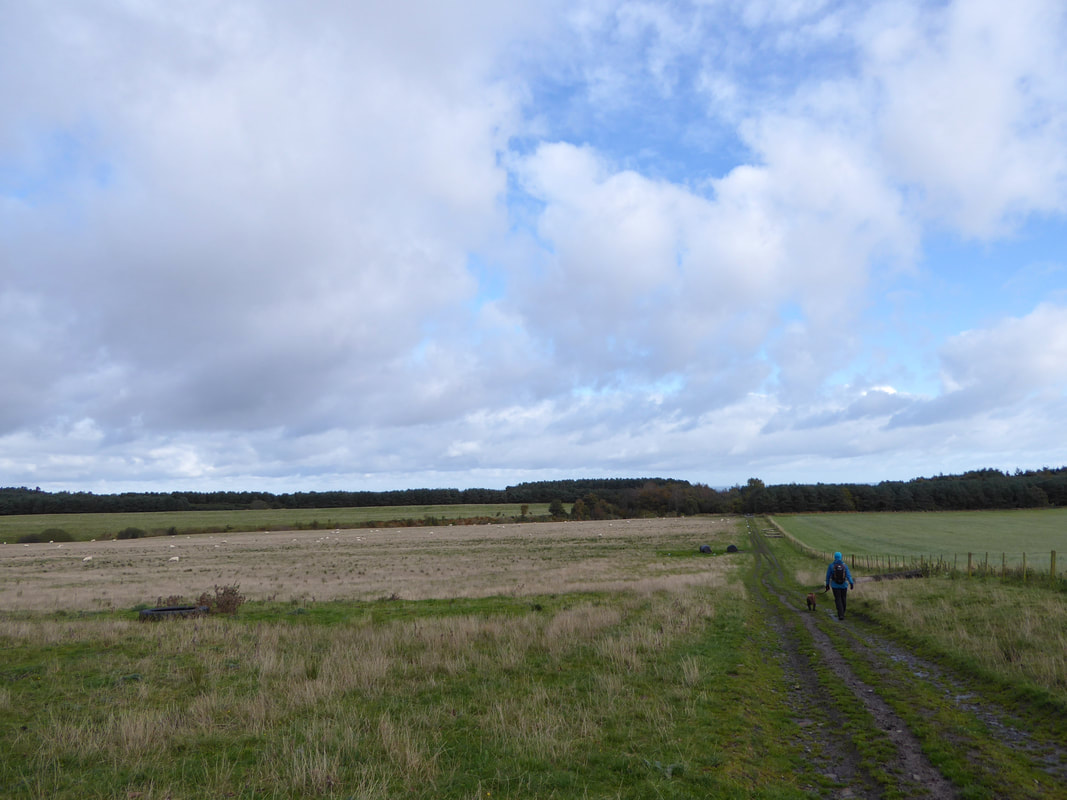 Open countryside now as we head to Swinhoe Farm 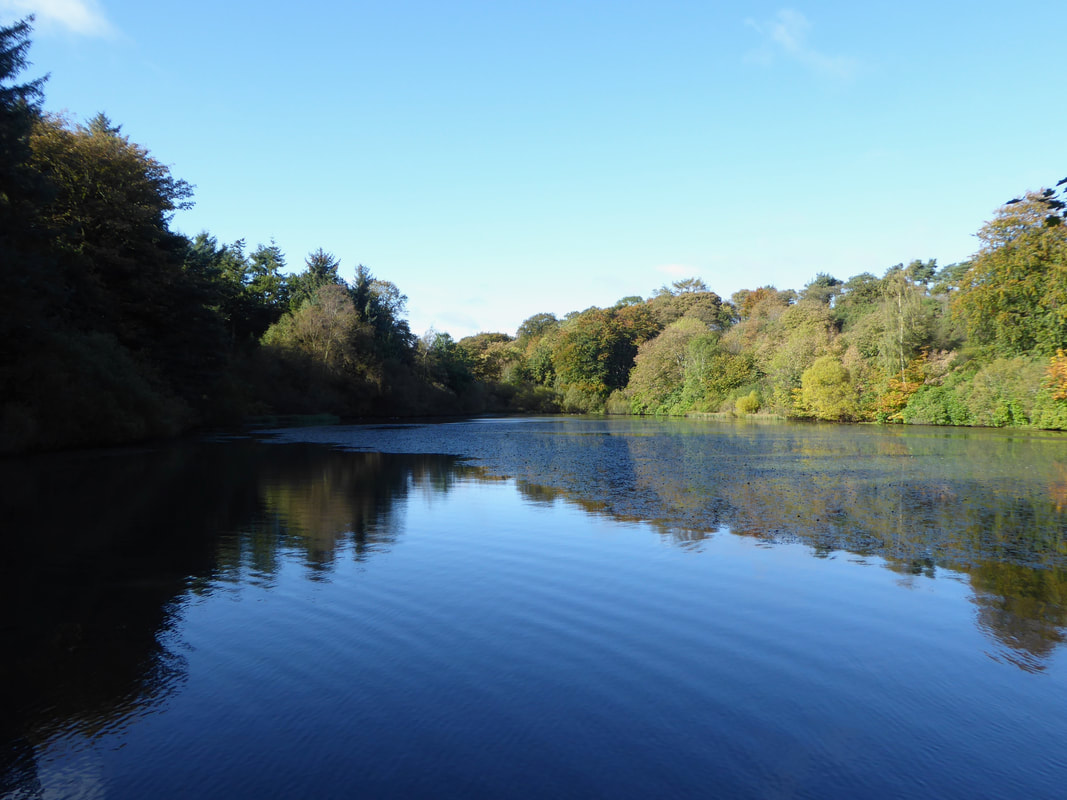 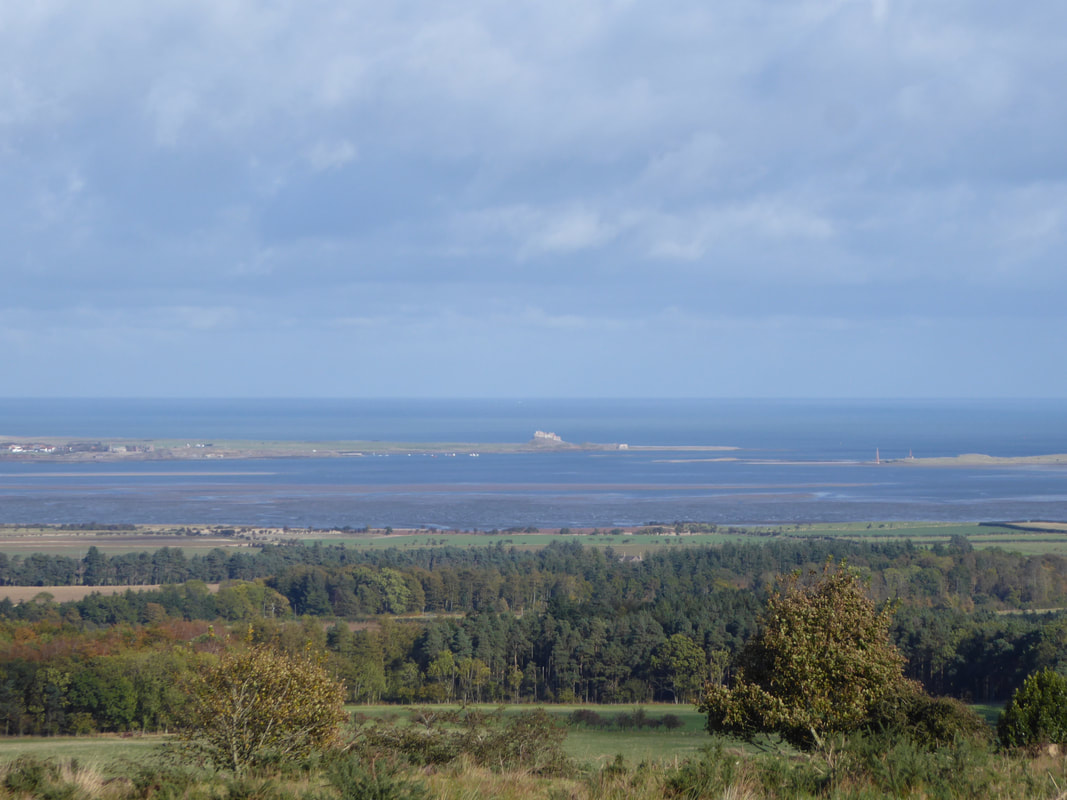 Zooming in on Lindisfarne (Holy Island) 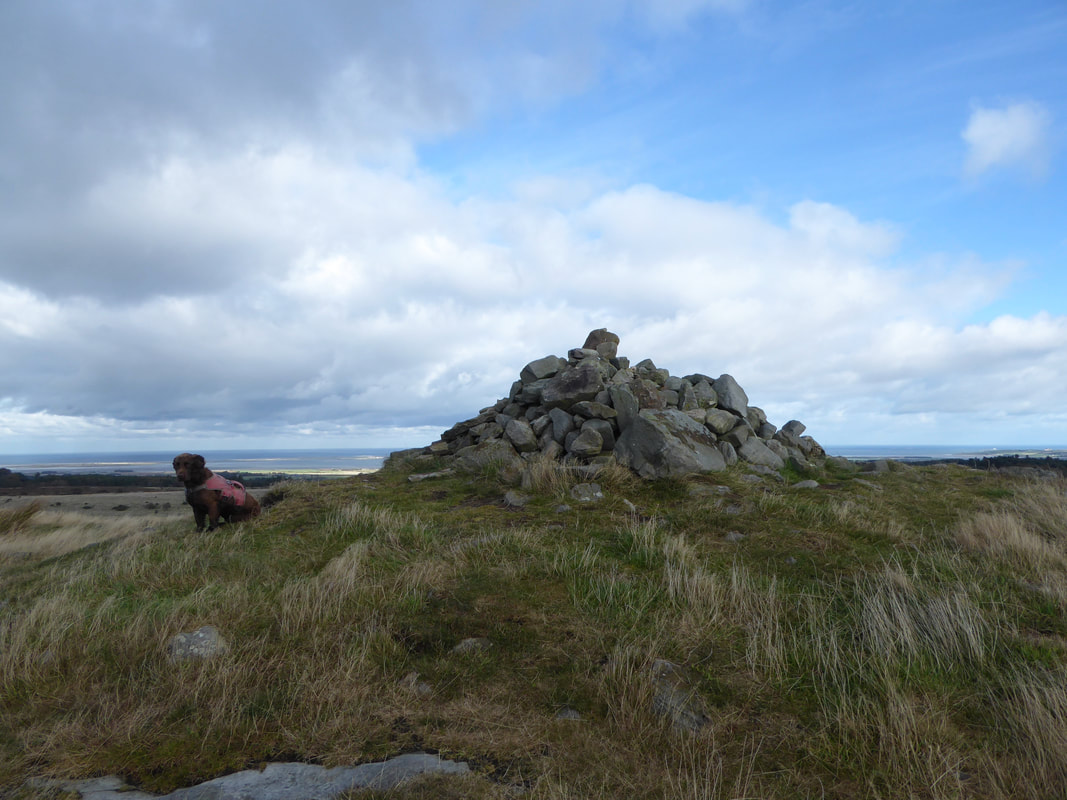 The cairn on the summit of Fawcet Hill 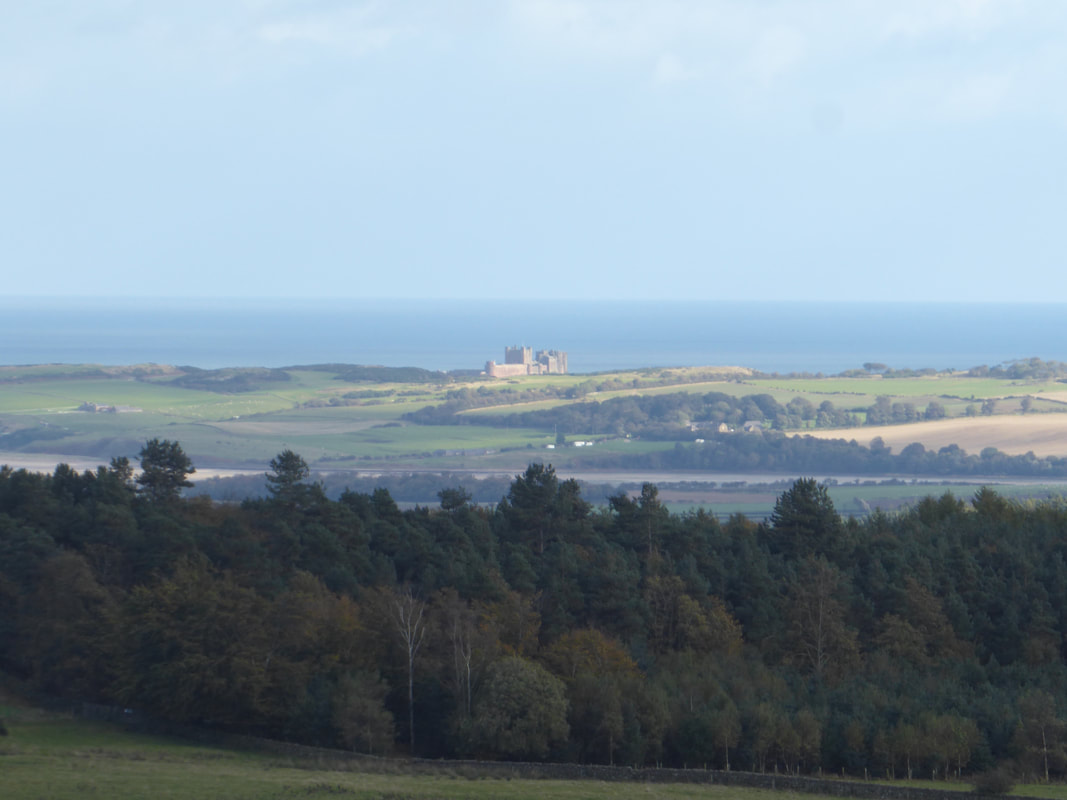 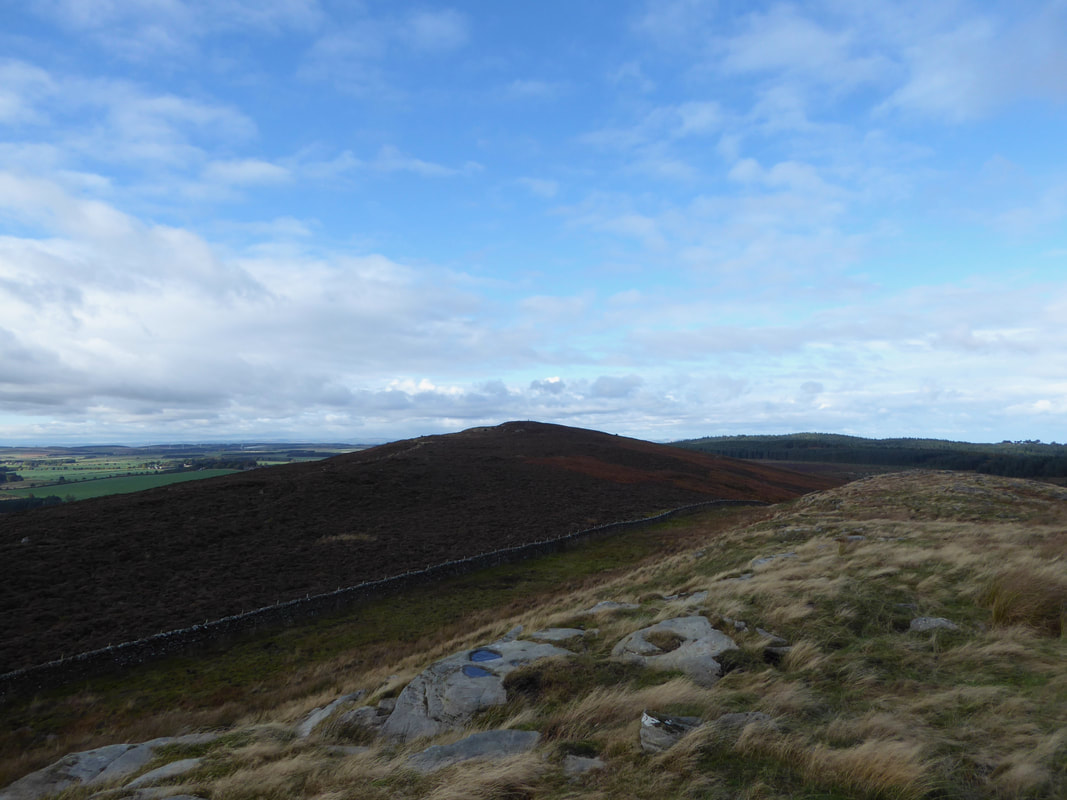 Looking to our next summit of Greensheen Hill from Fawcet Hill 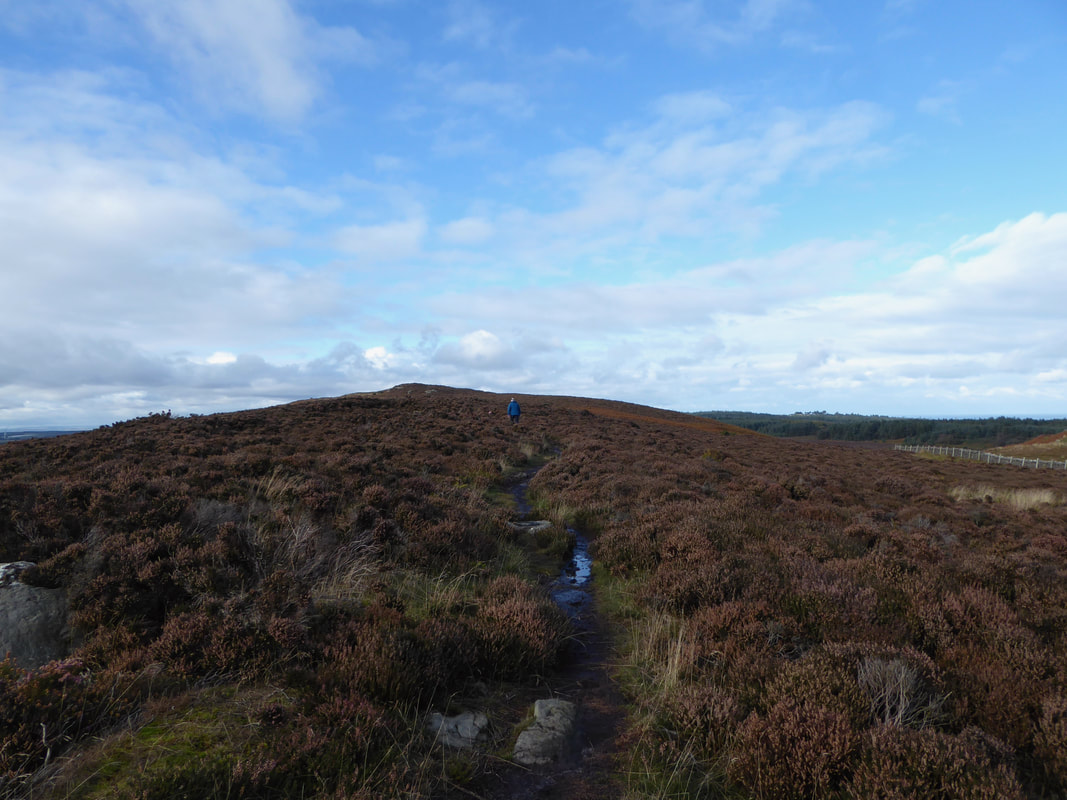 Trundling through the Heather to the summit of Greensheen Hill 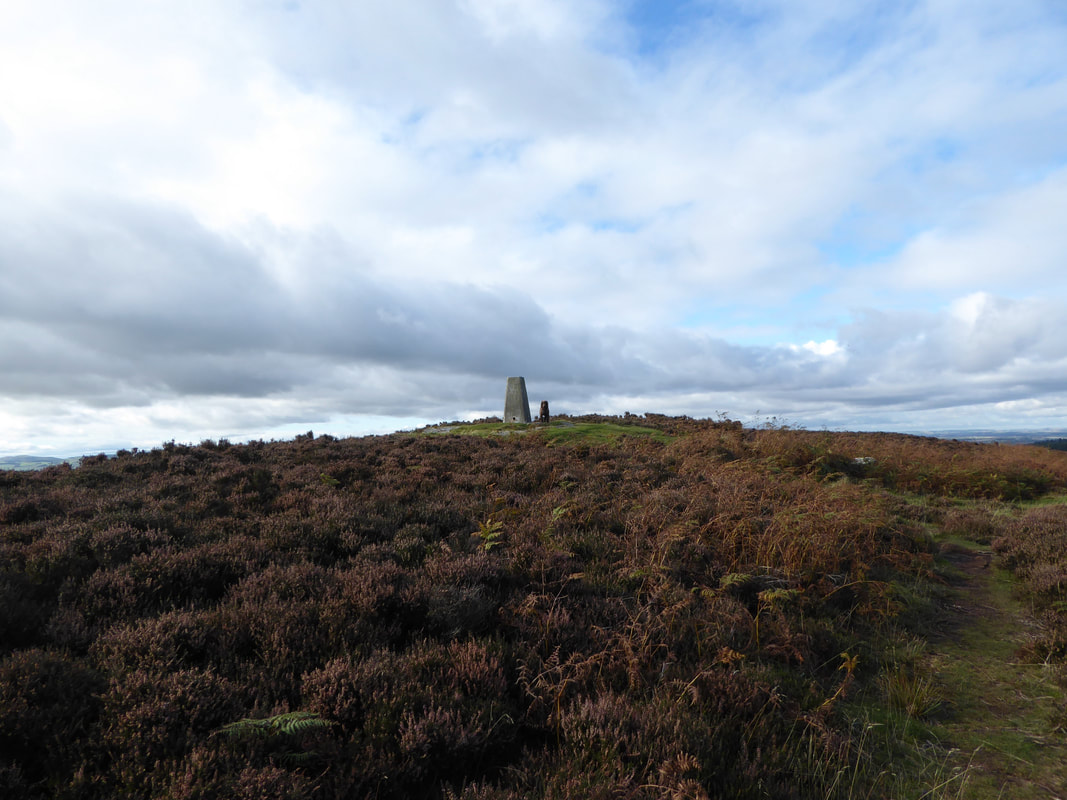 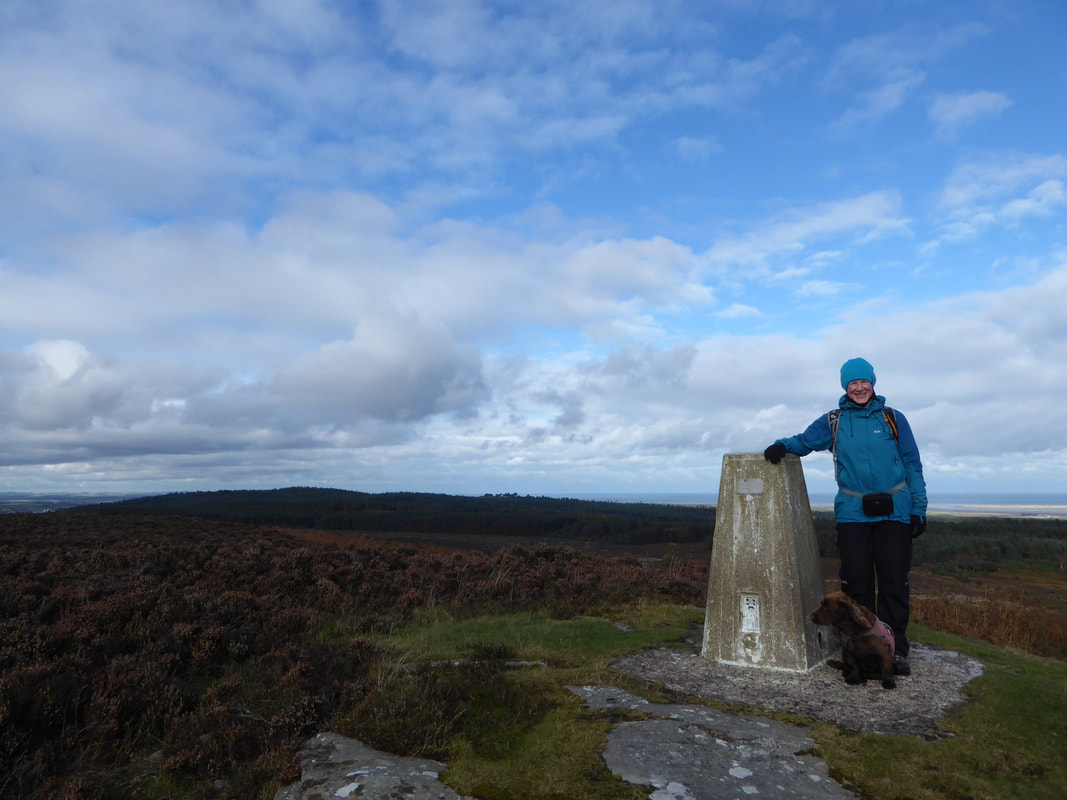 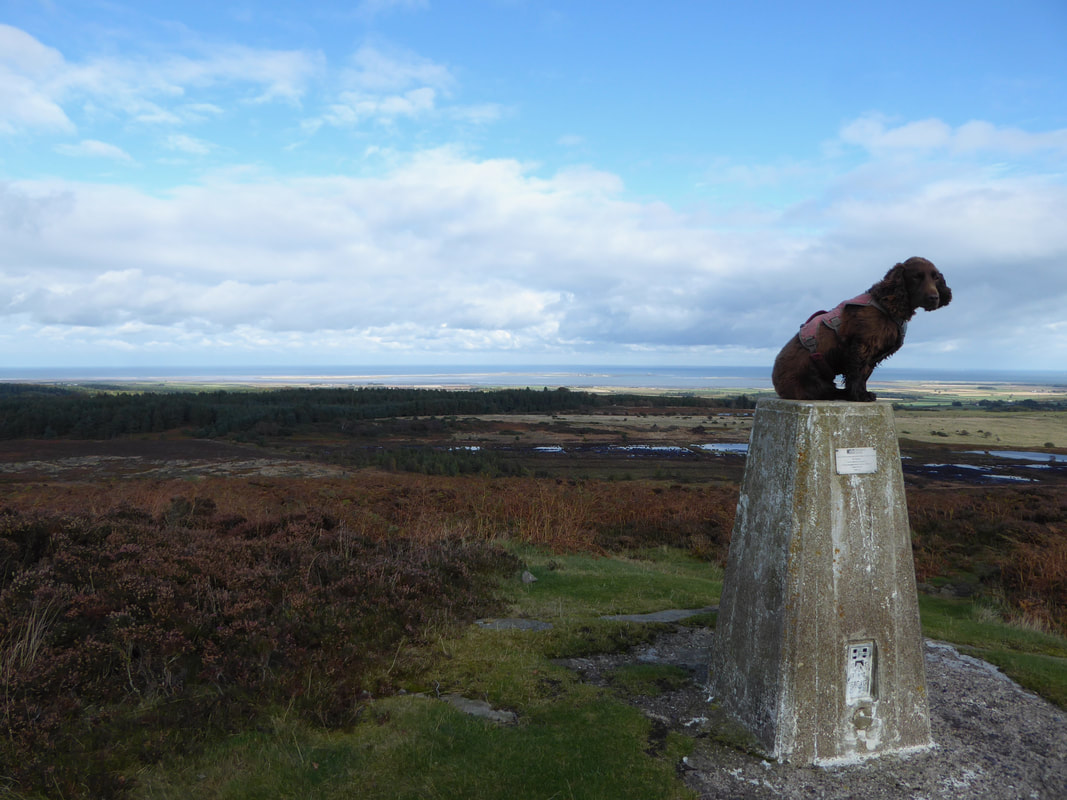 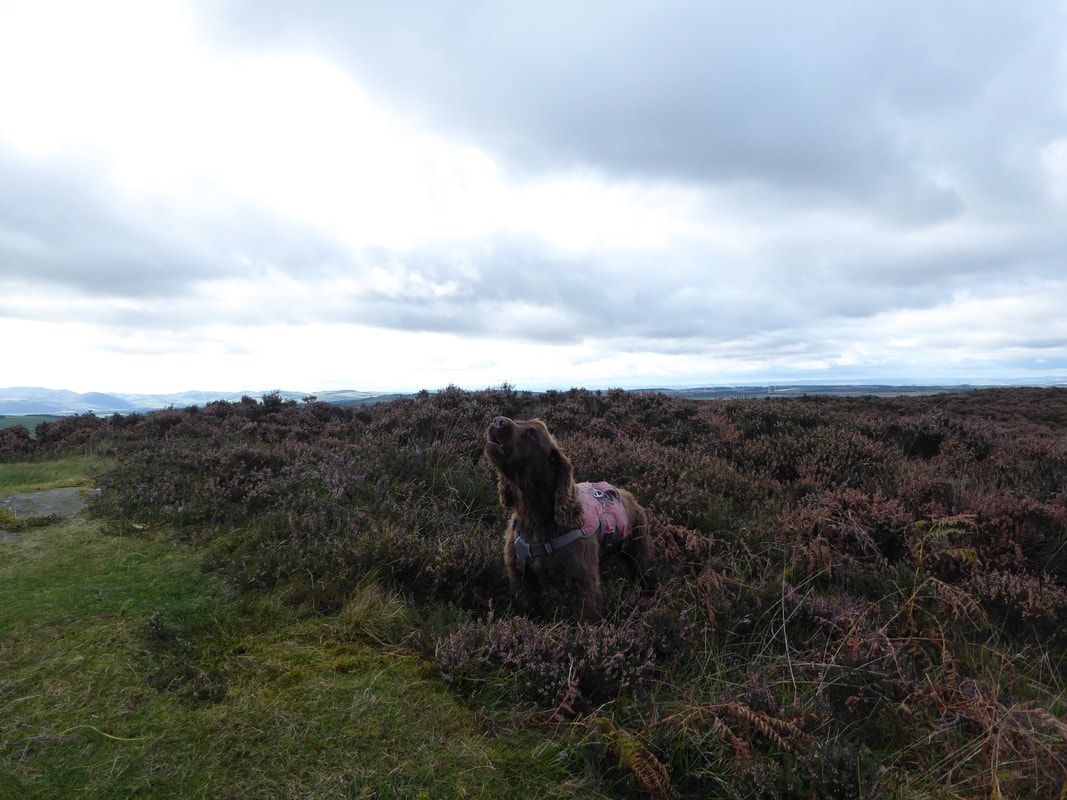 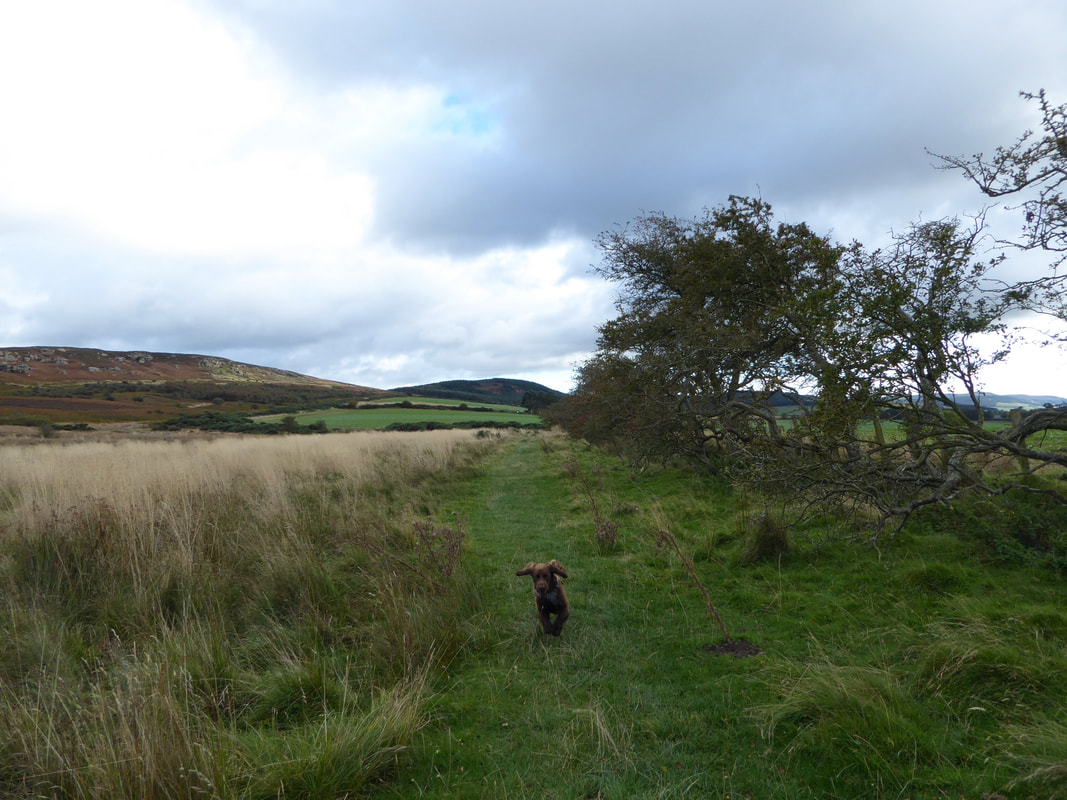