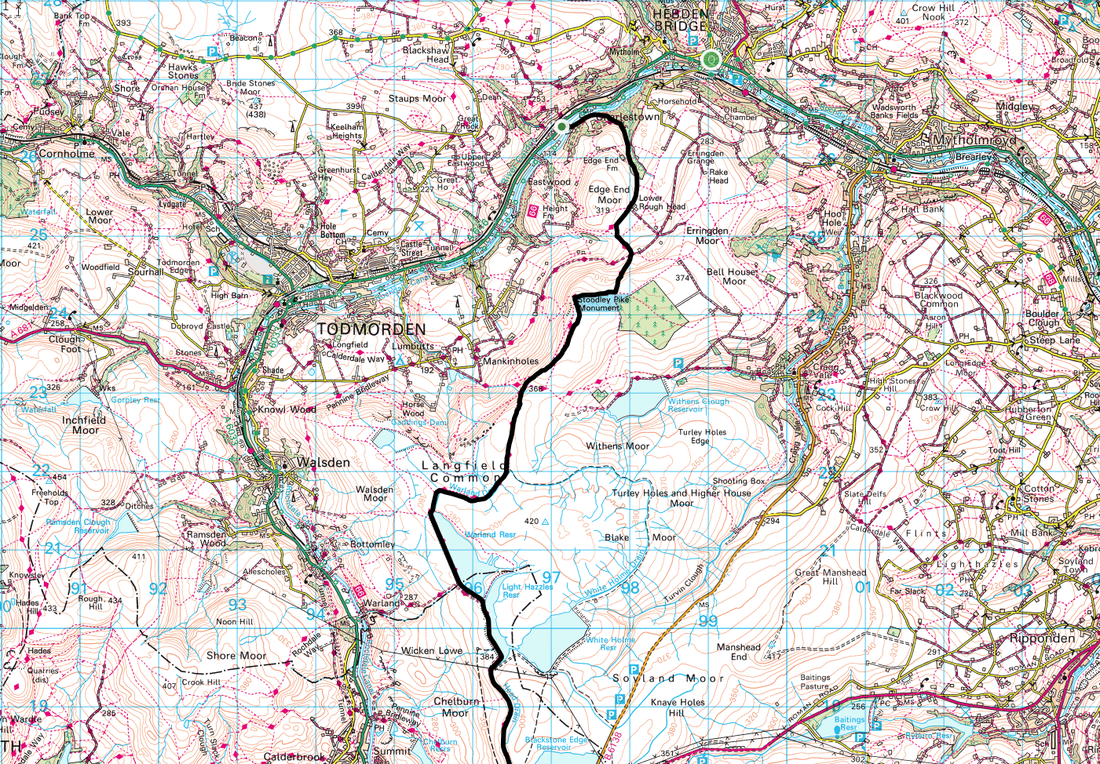 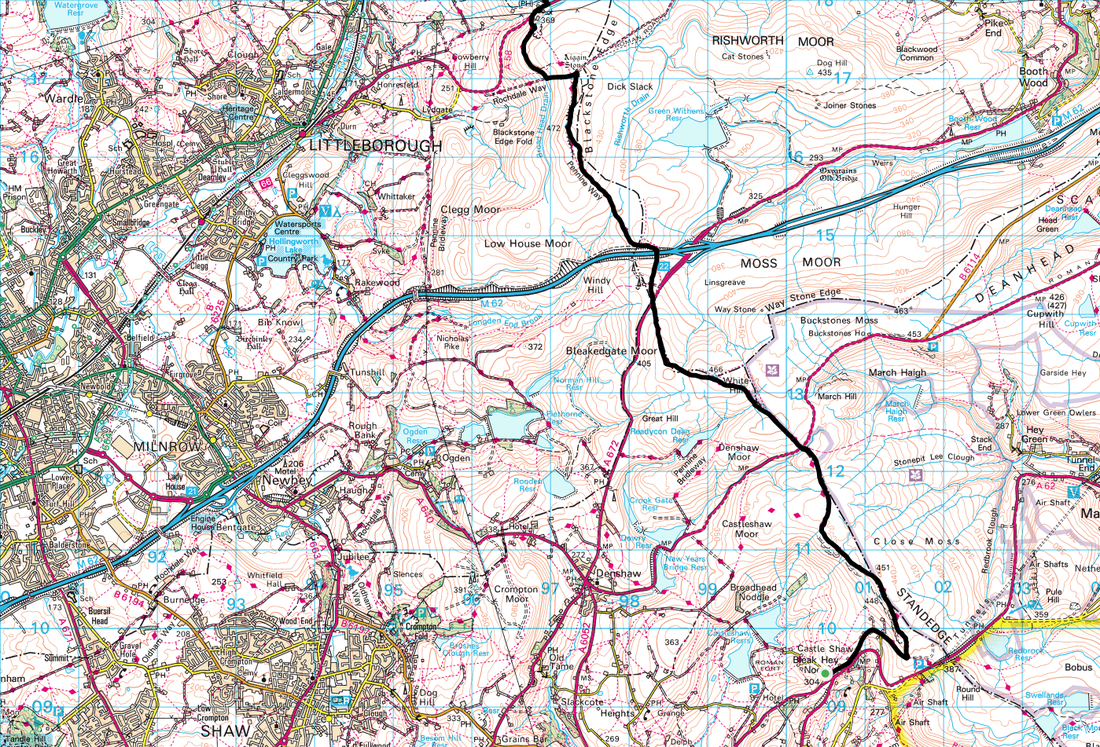 ​We awoke to sunshine this morning - and wondered to ourselves how much longer the weather would hold for us. The forecast for the next couple of days was ok but from then on appeared to be unsettled. Breakfast at Wellcroft House was a strange affair with the owner’s grandchildren running amok but no matter. At breakfast we got chatting to the two walkers we saw yesterday - John was from Devon and was walking the route in fewer days than we were therefore we would probably not see him again. The other walker was a young lady from Sweden - she was not really forthcoming as to her route therefore we left it at that. We never saw her again.

We were alone for the first part of the walk today as poor old Chips had to return to work - later on that day we had arranged to meet Wayne, a chap we had chatted with via a Facebook group who said he would walk out from Hebden Bridge to meet us. Therefore, with the promise of a good days weather we strode out of Delph and up Manor Lane to rejoin the Pennine Way near the A62.​ 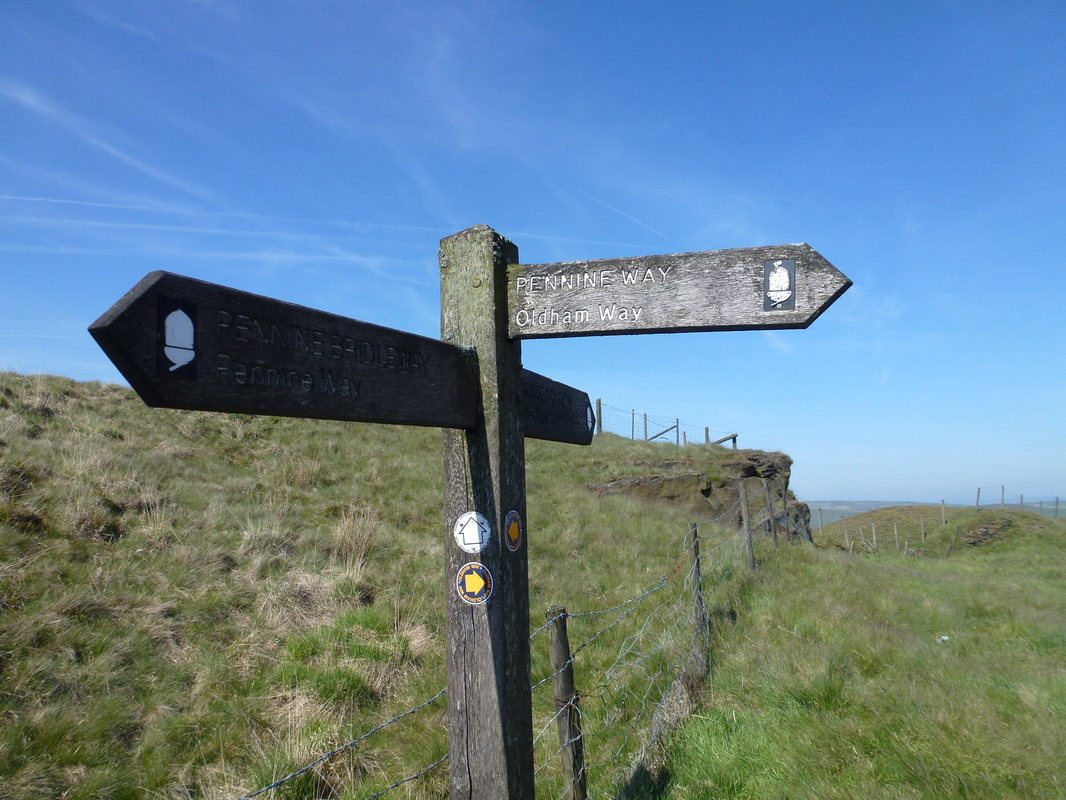 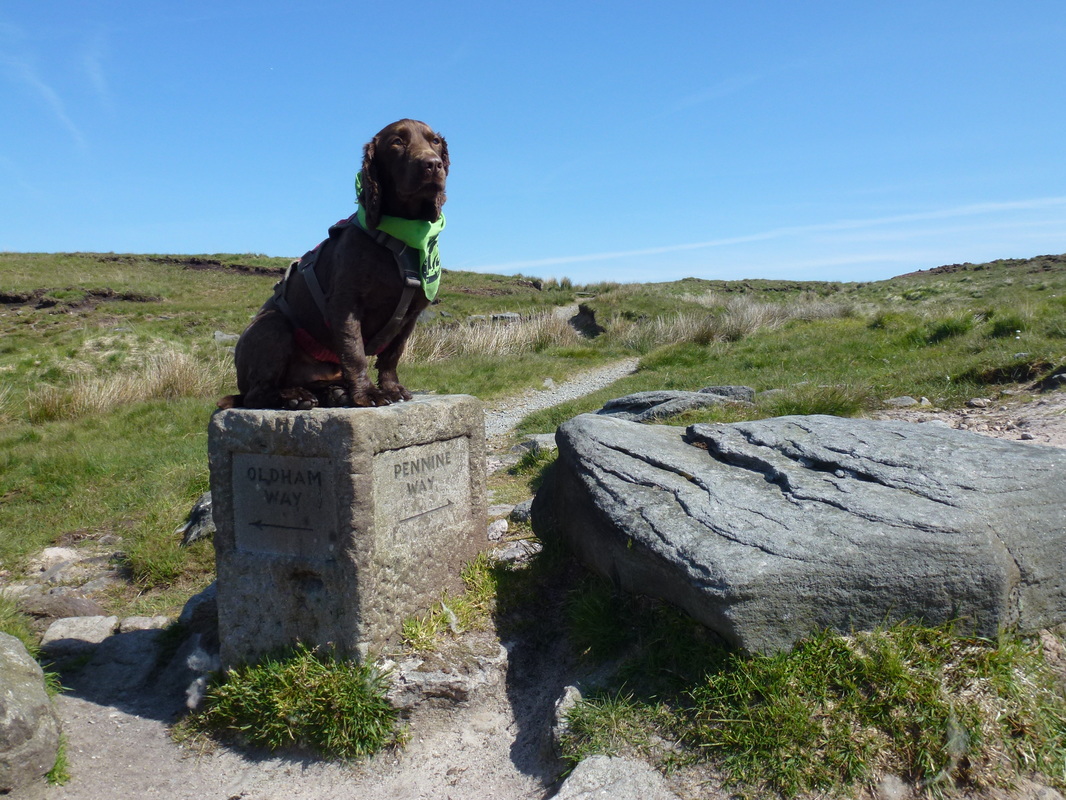 Descending Millstone Edge the path leaves the Oldham Way
​The first couple of miles today were along the Oldham Way which the Pennine Way follows past Millstone Edge until it heads right at a stone marker. From the marker the terrain was on a well-maintained and restored path and we made good progress to reach the A640. Crossing the road the path continued to White Hill, passing the most easterly point of Lancashire on the edge of the Marsden Moor Estate. From White Hill we then skirted Green Hole Hill before dropping down to the A672 and the Windy Hill Radio Mast - there was a tempting butty van in the lay by but we carried on past the mast to reach the bridge over the M62. 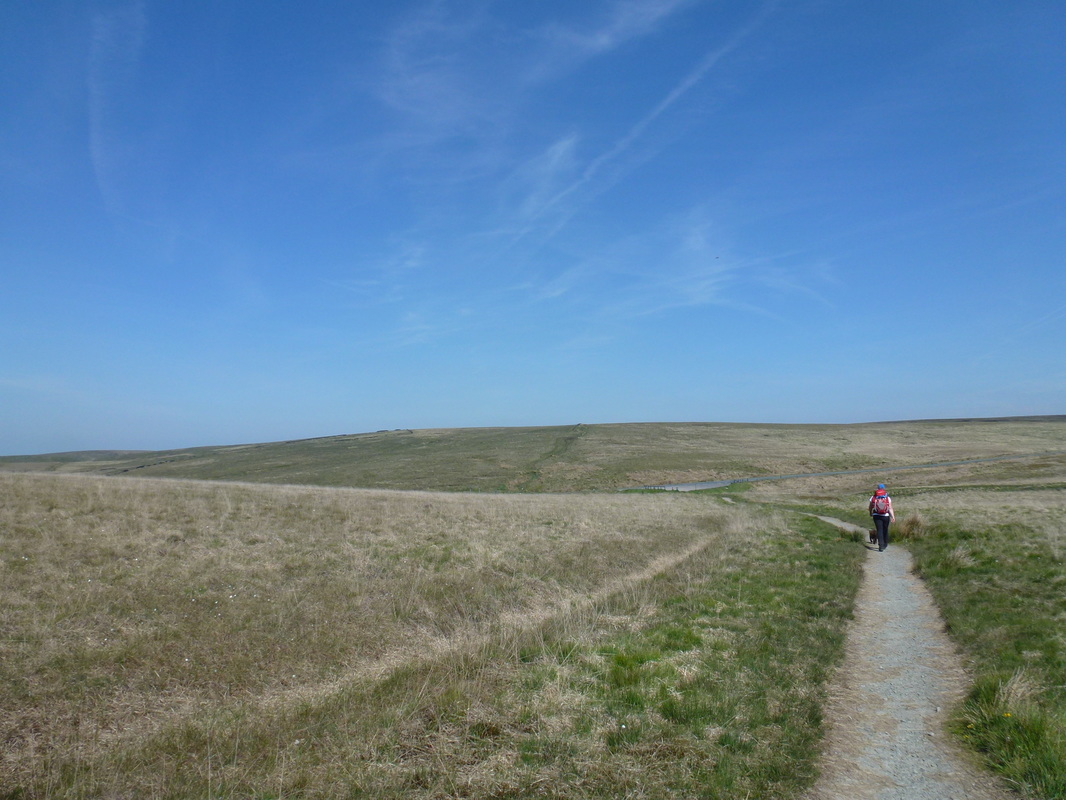 Heading to White Hill with the A640 ahead 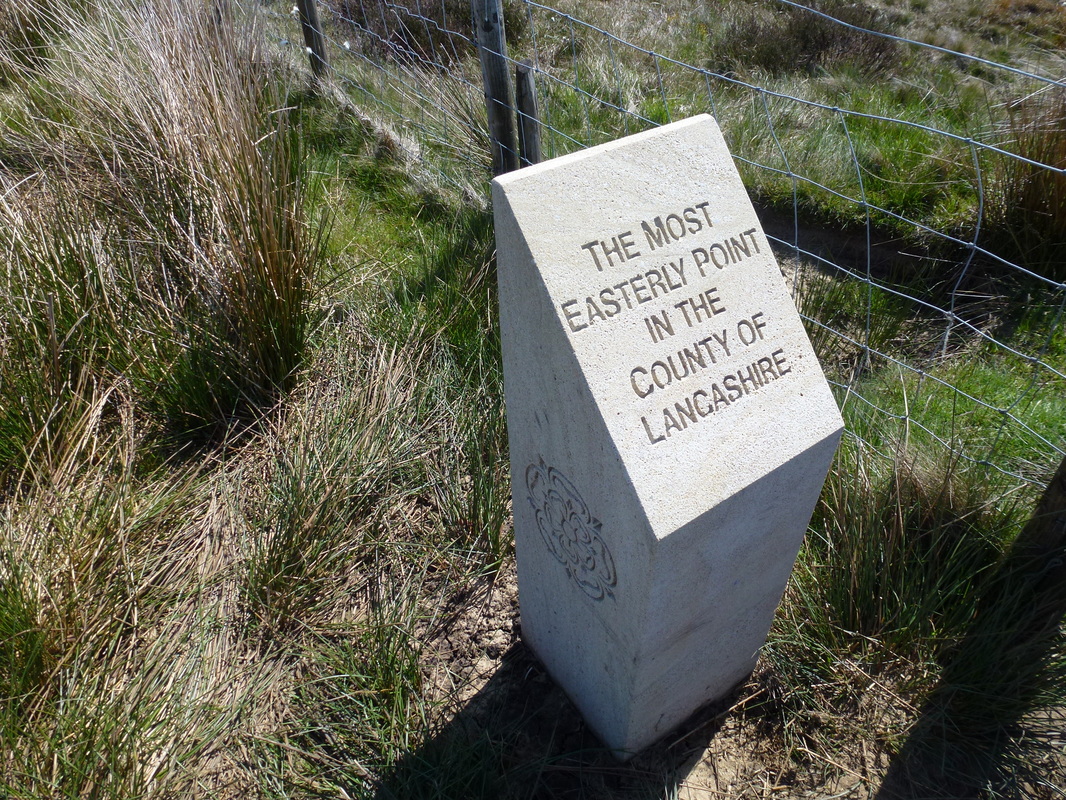 Just after crossing the A640 - well there you go! 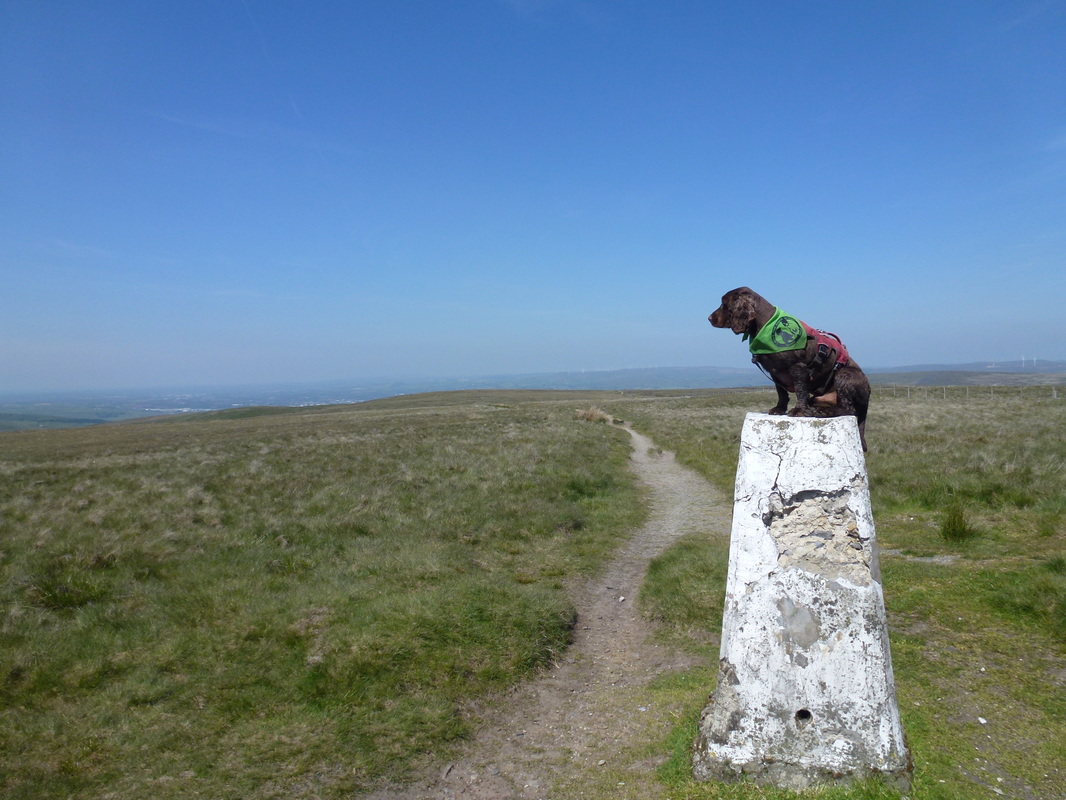 The summit of White Hill 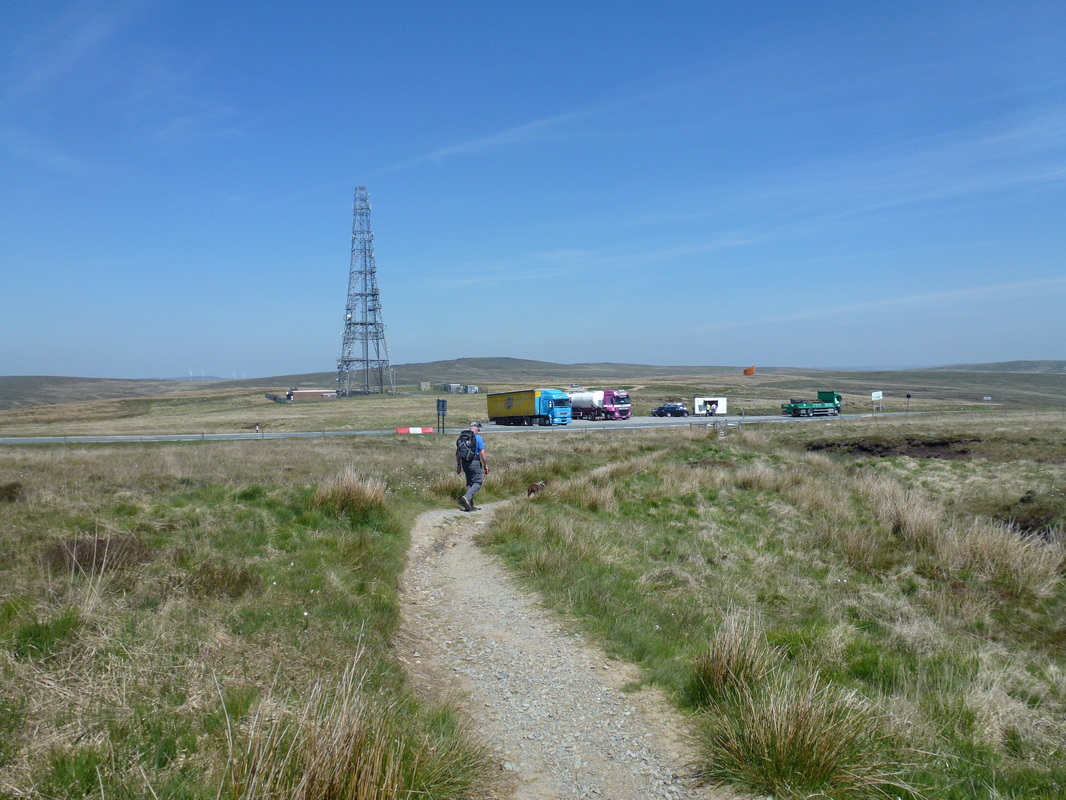 The lay by on the A672 and Windy Hill Radio Mast 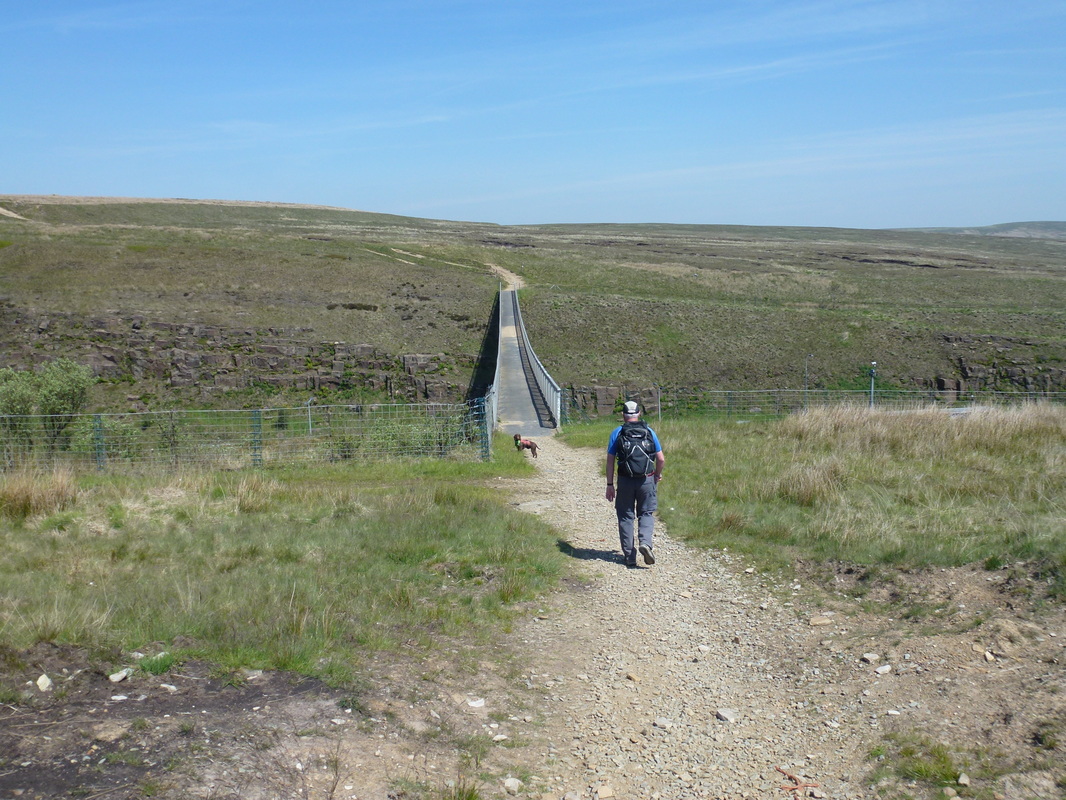 The bridge over the extremely busy M62
The noise of the M62 was deafening as we crossed via the bridge and followed the signpost to the left and on to a slabbed path which gave us good views over to Littleborough. A rising slabbed path took us up on to the gritstone escarpment of Blackstone Edge and heading along the ridge soon reached the Trig Point which is perched on a rock. Leaving the Trig, we remained high on a well cairned path to eventually drop down to the Aiggin Stone  - a 600 year old standing stone which is probably an old boundary marker.​ 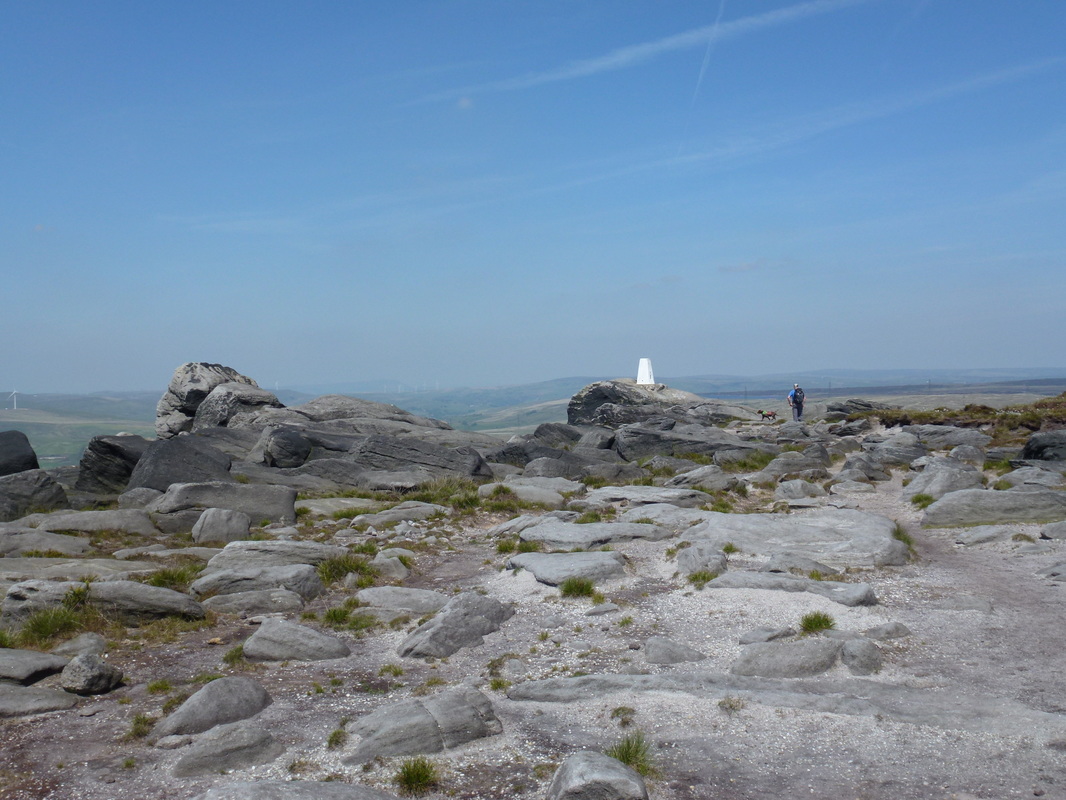 The summit of Blackstone Edge 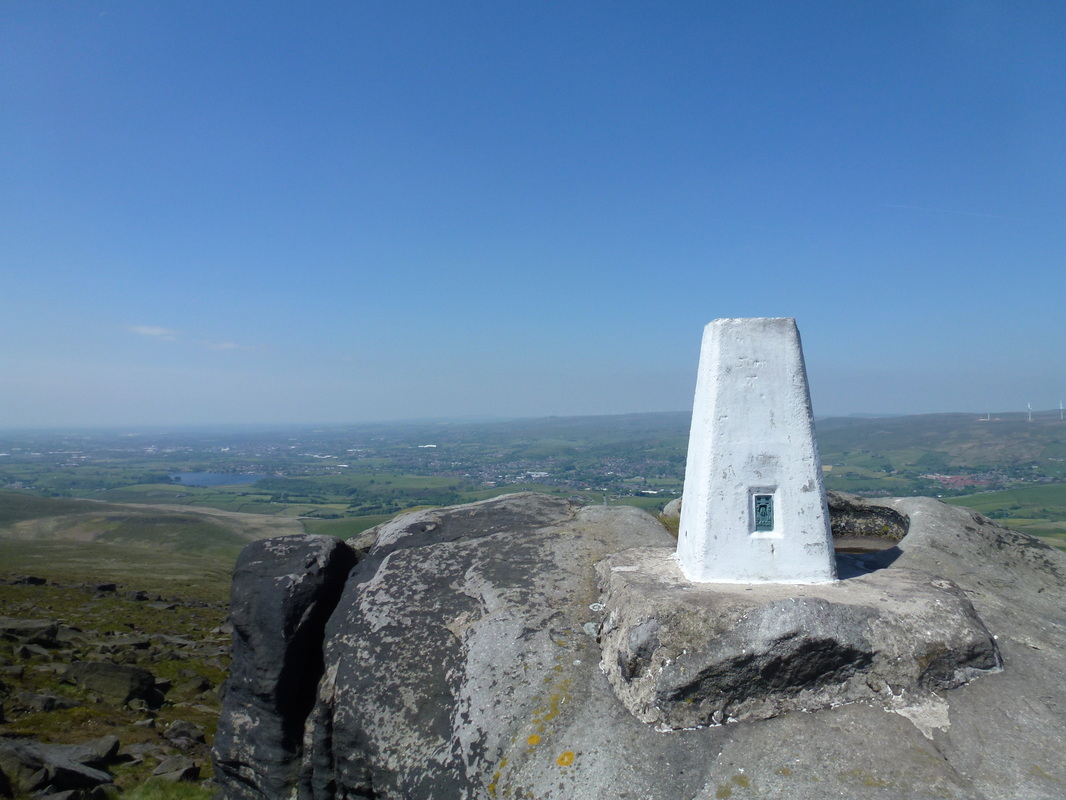 The summit of Blackstone Edge - looking west over to Littleborough 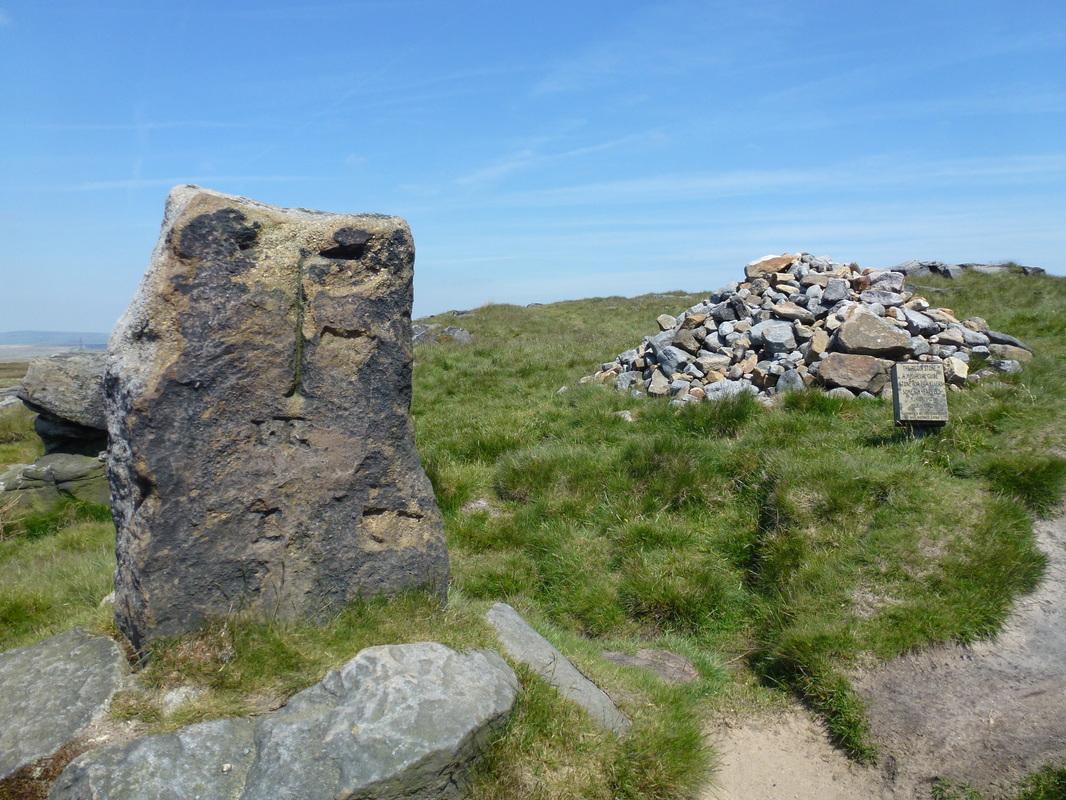 The Aiggin Stone
From the Aiggin Stone the route travelled down what some consider to be an old Roman packhorse road although this is not proven. Shortly leaving the road, we contoured the lower slopes of Blackstone Edge before crossing our 3rd ‘A’ road of the day, the A58 to reach The White House pub and a welcome drink. From the pub and having dragged ourselves away, we joined a wide track which hugged the edge of Blackstone Reservoir before stretching away to pass Light Hazzles and Warland Reservoirs. Whilst this stretch would not please everybody, on a sunny day it was a nice respite to walk along a good, flat track.​ 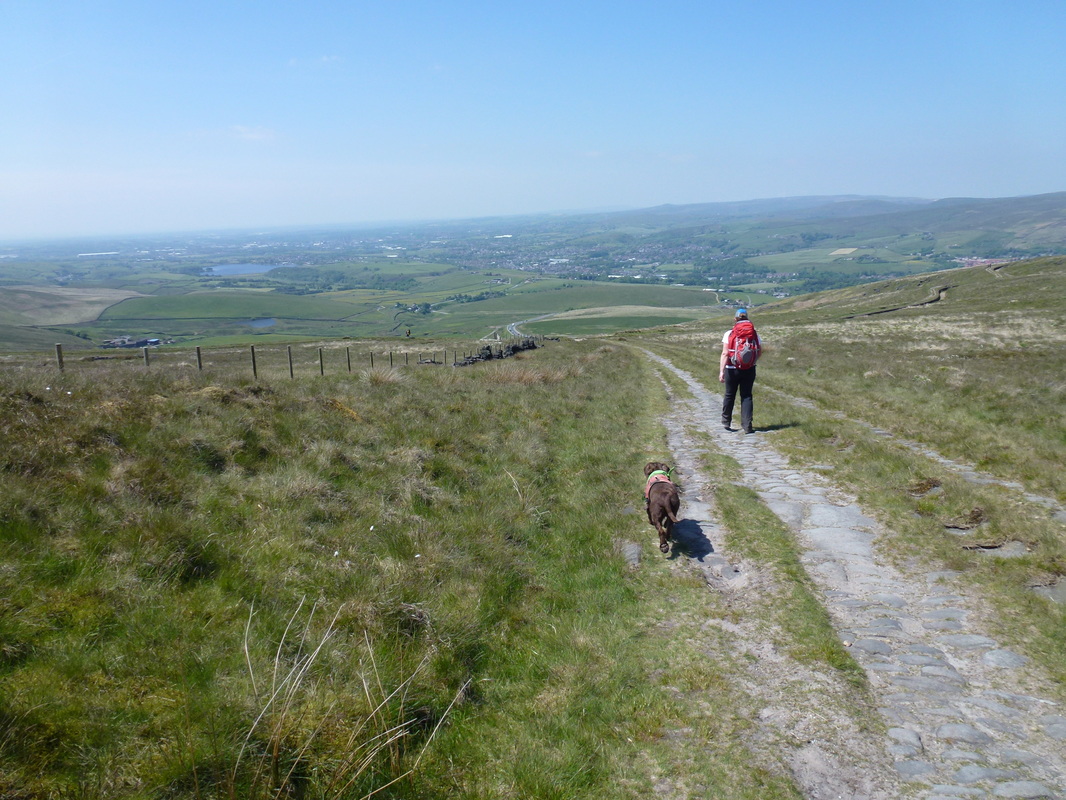 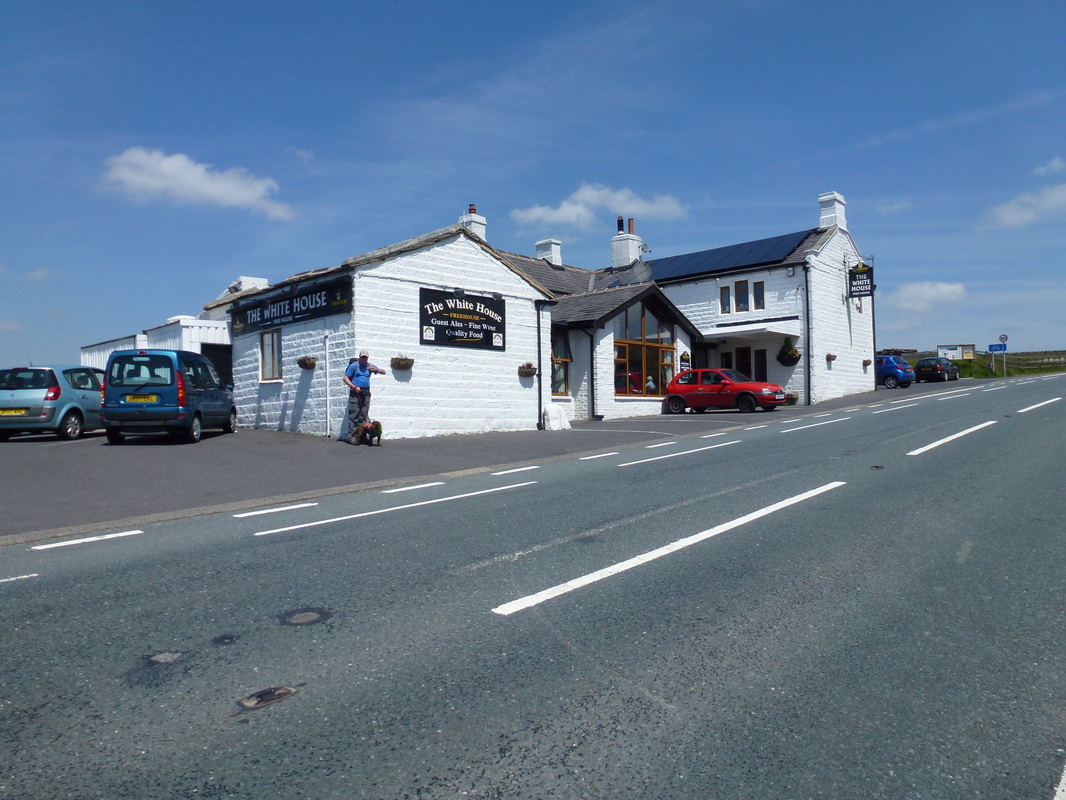 The White House Pub on the A58 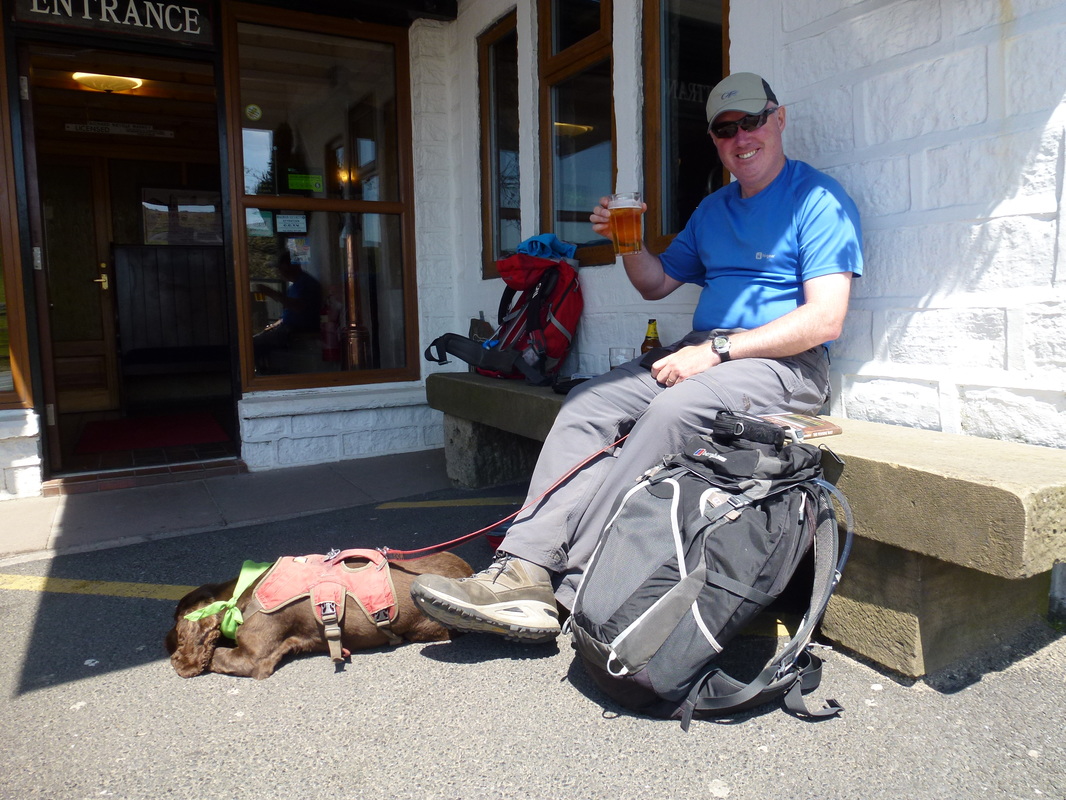 Oh go on then! Any excuse for Fudge to get some zeds in. 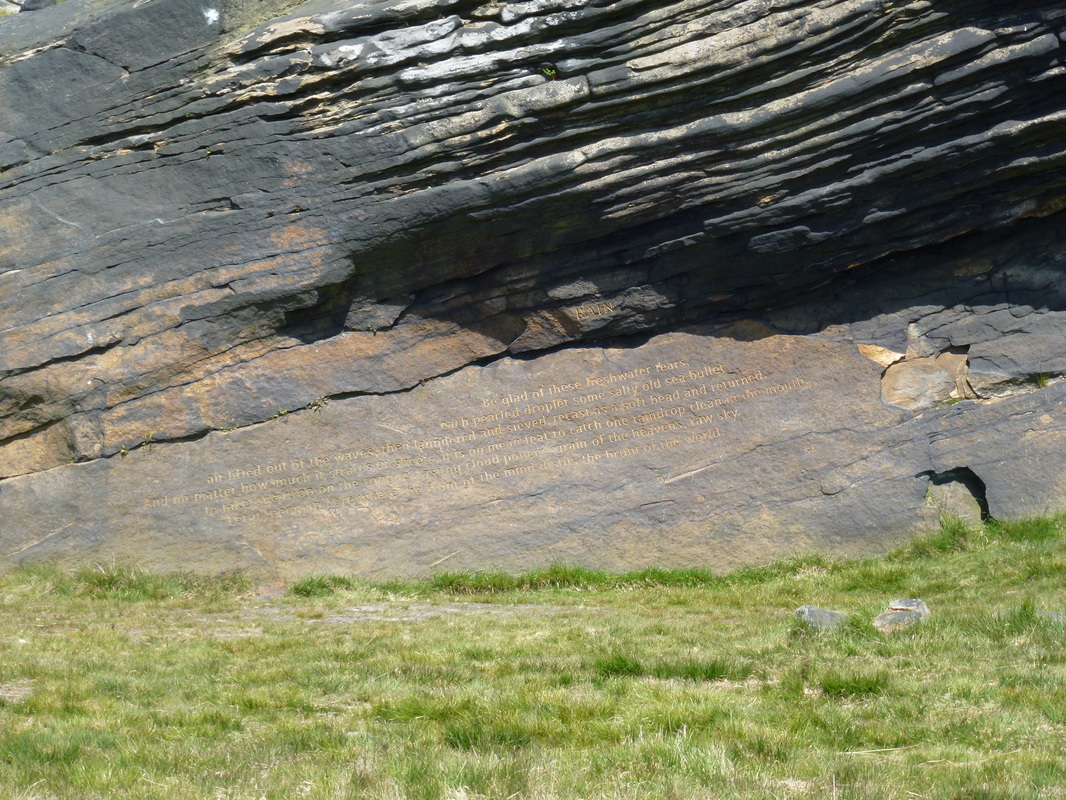 One of the six Stanza Stones - each inscribed with a poem by Simon Armitage.
​He completed the Pennine Way in 2010, funding his trip by giving readings in village halls, pubs and homes.
From Warlands Reservoir the route reached a junction with the Todmorden Way and shortly after we met up with Wayne who had made good time in coming out from Hebden Bridge. After passing a boundary stone we saw our first view of Stoodley Pike and it is true what people say - as you head towards it, the obelisk just seems to never get any nearer but obviously it does. Boundary stones now marked the way forward but with todays visibility, route finding was never going to be a problem and we eventually arrived at Stoodley Pike.​ 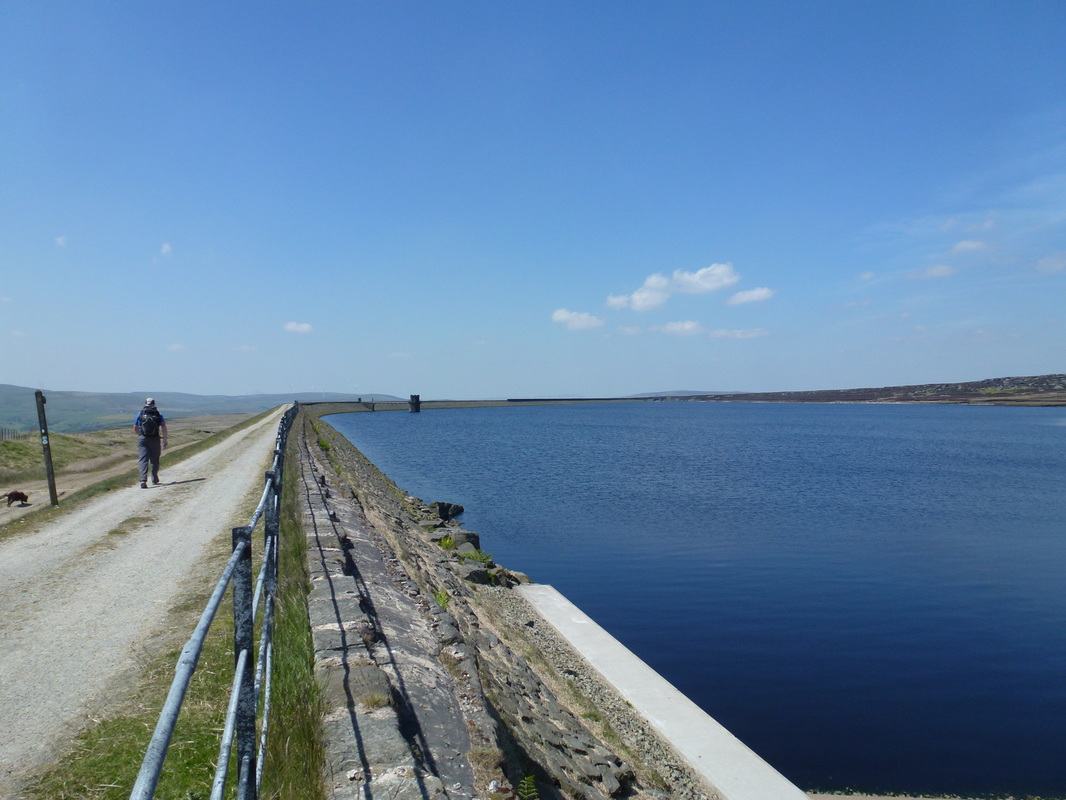 The path heads along the edge of Blackstone Edge Reservoir 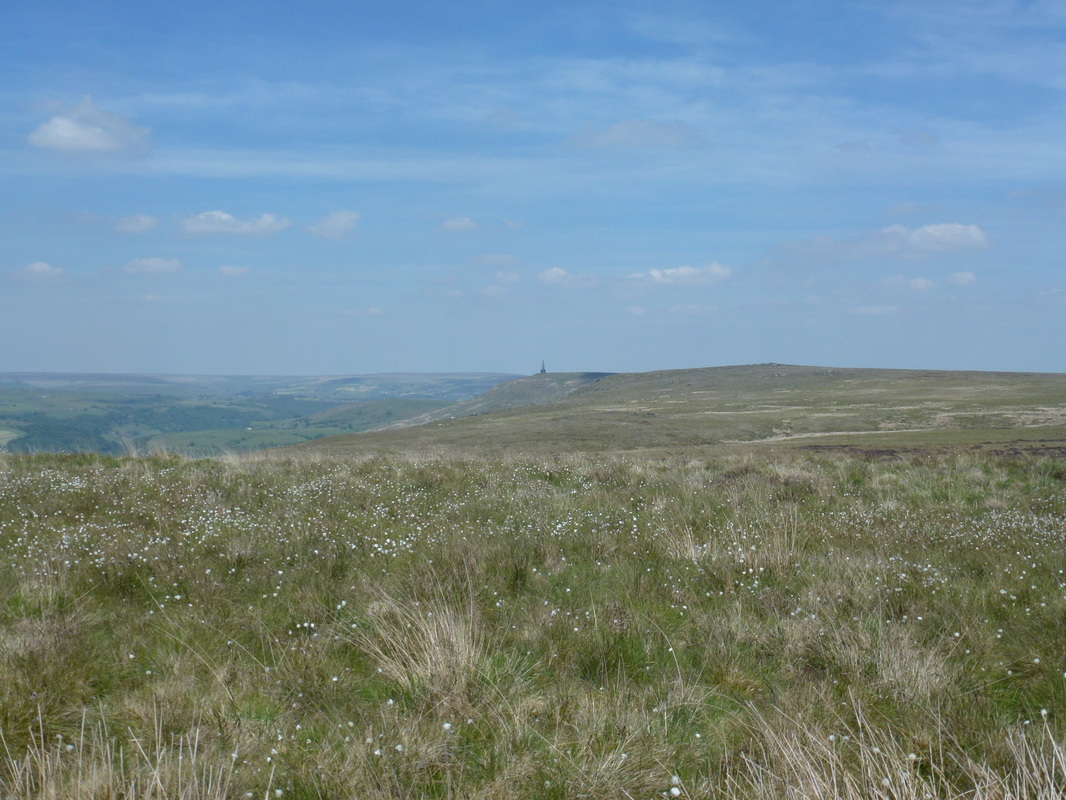 Our first view of Stoodley Pike 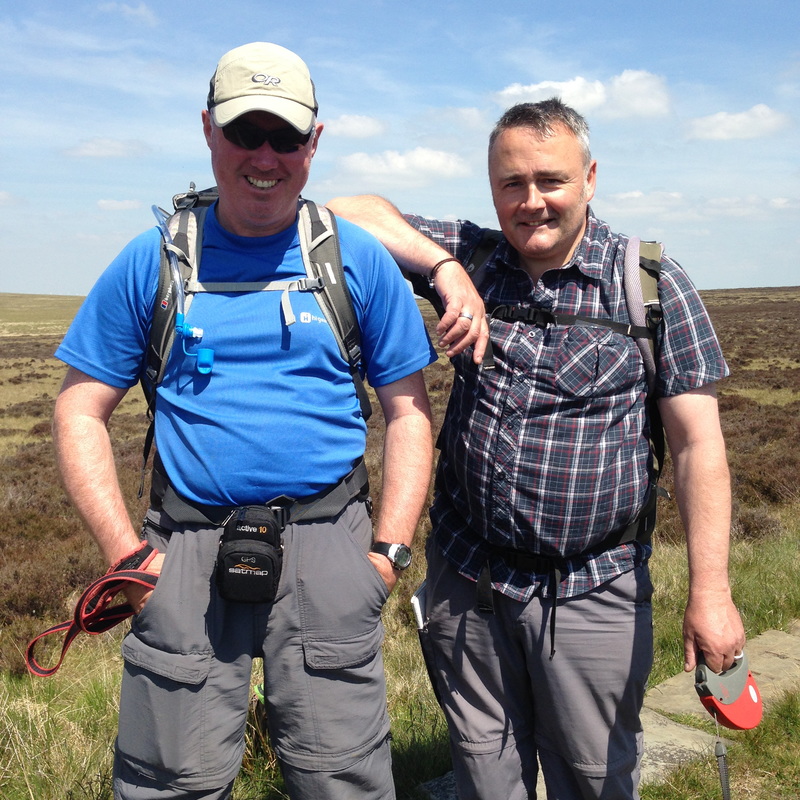 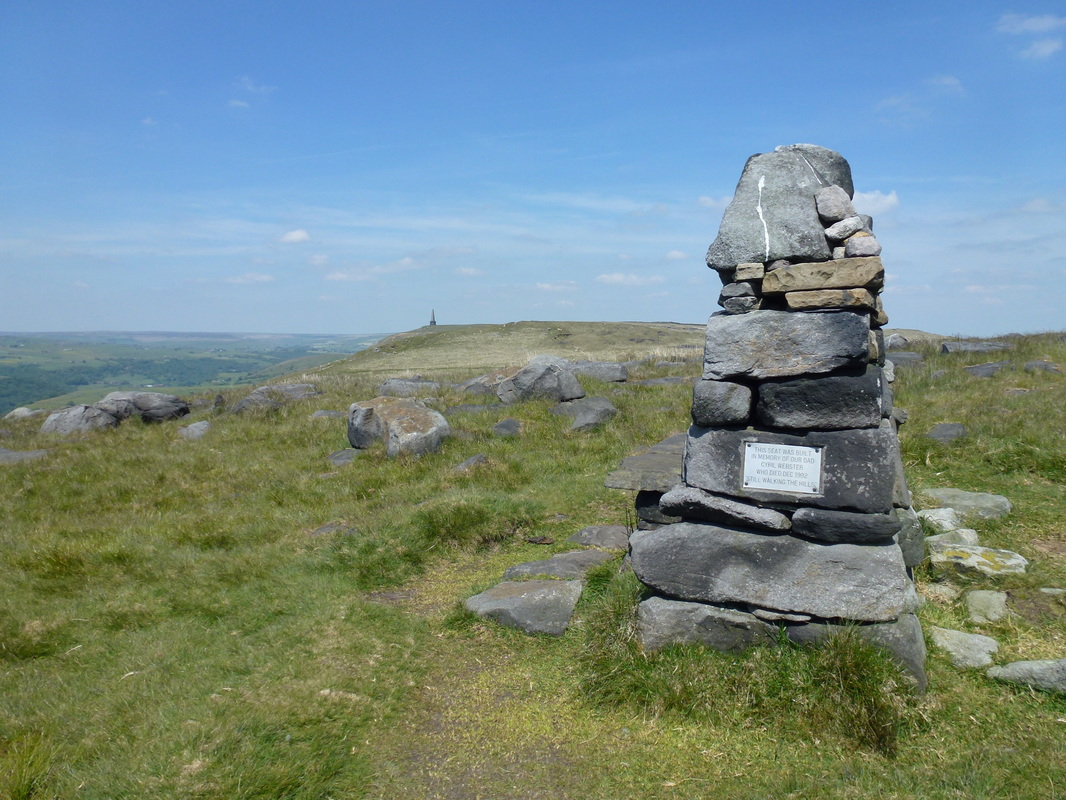 The Cyril Webster Memorial Seat high above Todmorden near Stoodley Pike - is it getting any nearer?
Stoodley Pike was built in 1814 to commemorate the defeat of Napoleon and the surrender of Paris. In 1854 it was struck by lightning and collapsed but was rebuilt in 1889 this time with a lightning conductor added. The monument contains a 39 step spiral staircase which leads to a balcony giving superb views over to Todmorden. Unfortunately there are people in the world who think it is really great to graffiti and deface lovely monuments like this - it was covered in it.​ 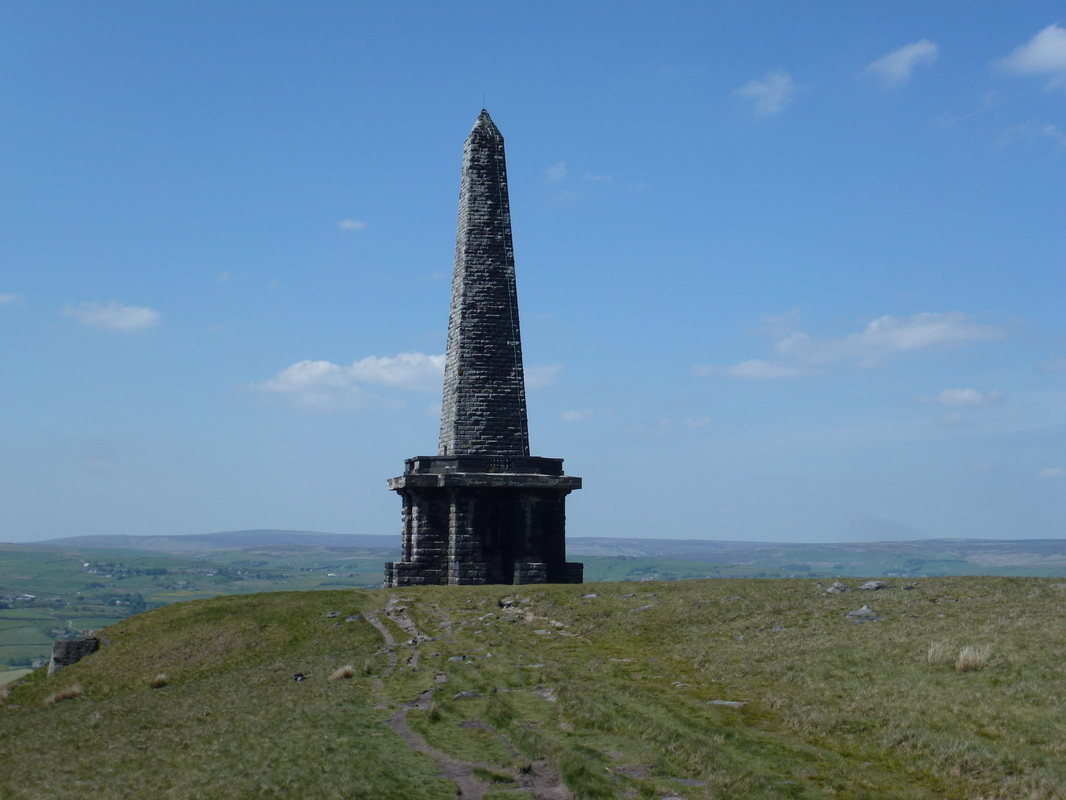 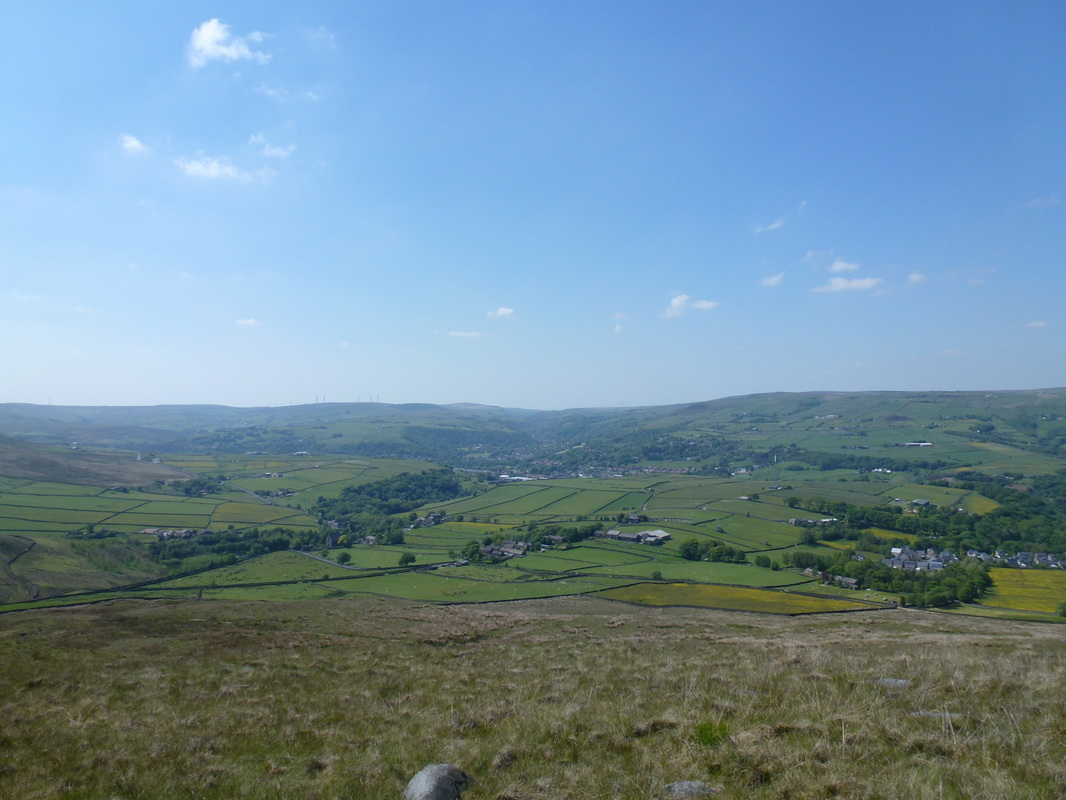 Todmorden
Leaving Stoodley Pike the route headed down a good stony track and over fields to reach Lower Rough Head Farm and joined a walled lane which descended through woodland to reach the Rochdale Canal and the end of todays walk at the A646. Wayne's car was parked here and he kindly gave us a lift into Hebden Bridge for a debrief at The Shoulder of Mutton in the town before dropping us off at our B&B. 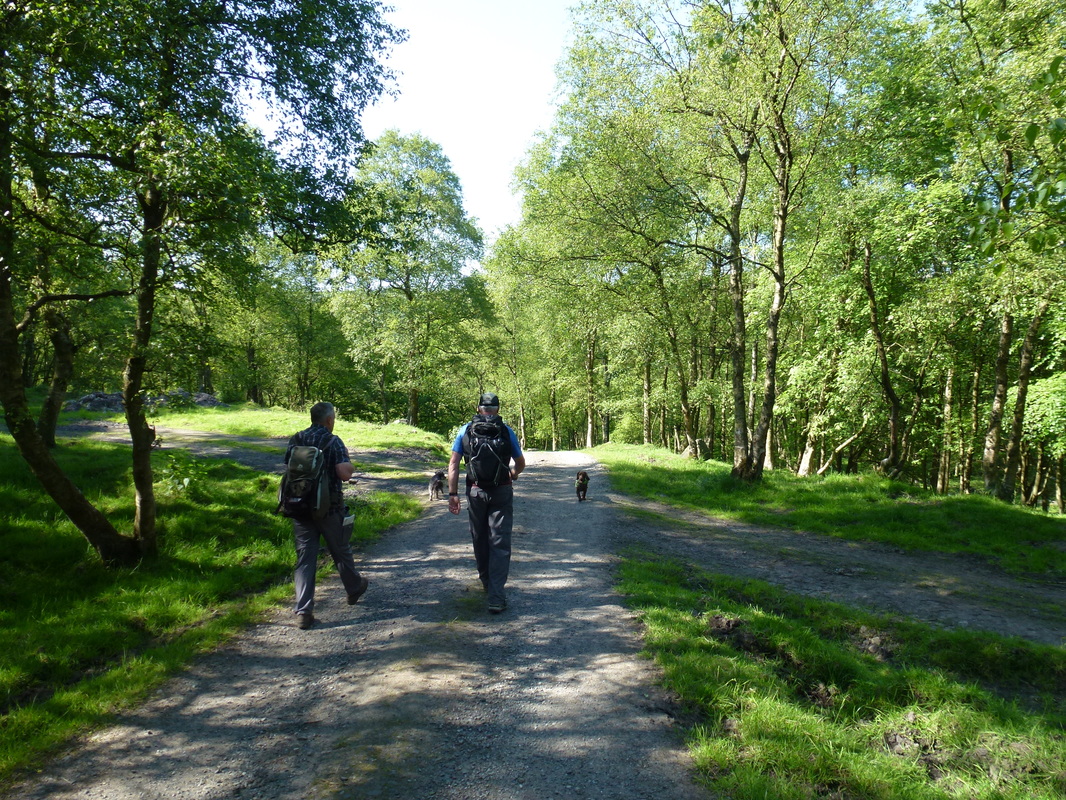 Descending the track down to Hebden Bridge 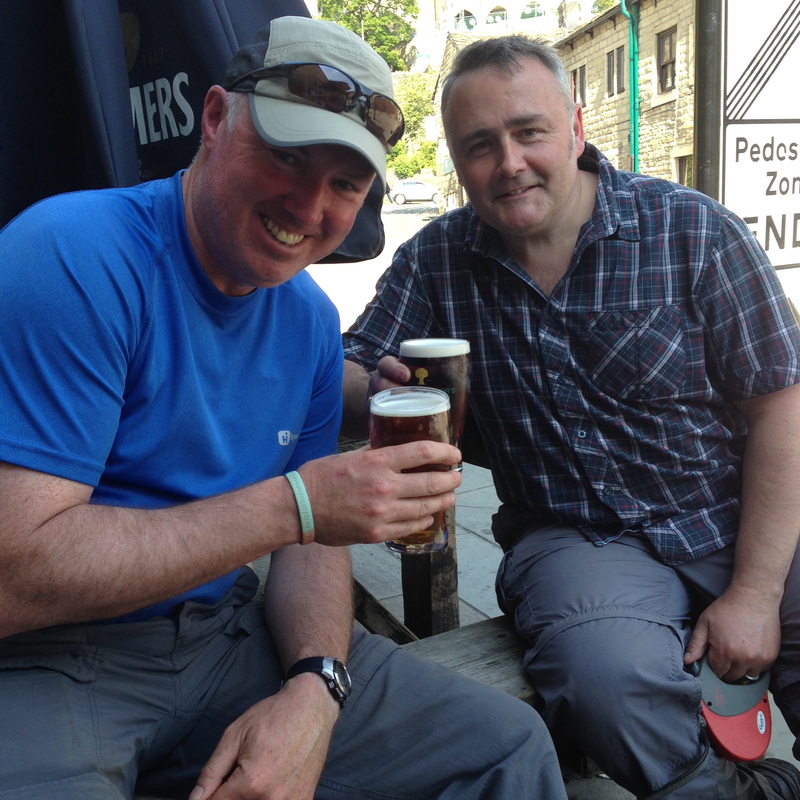 Cheers Wayne - thanks for coming out to see us
Hebden Bridge has clearly has an eclectic mix of people and a sort of hippy atmosphere going on - on a lovely day like today people were out in number enjoying the river and shopping. Todays walk was a cracker - superb weather and visibility coupled with walking over a varied landscape made for a really enjoyable day out. After a nice meal in The Stubbing Wharf on the canal we topped up our supplies from the Co-op in the town and made ready for Day 4.
Overnight Accommodation 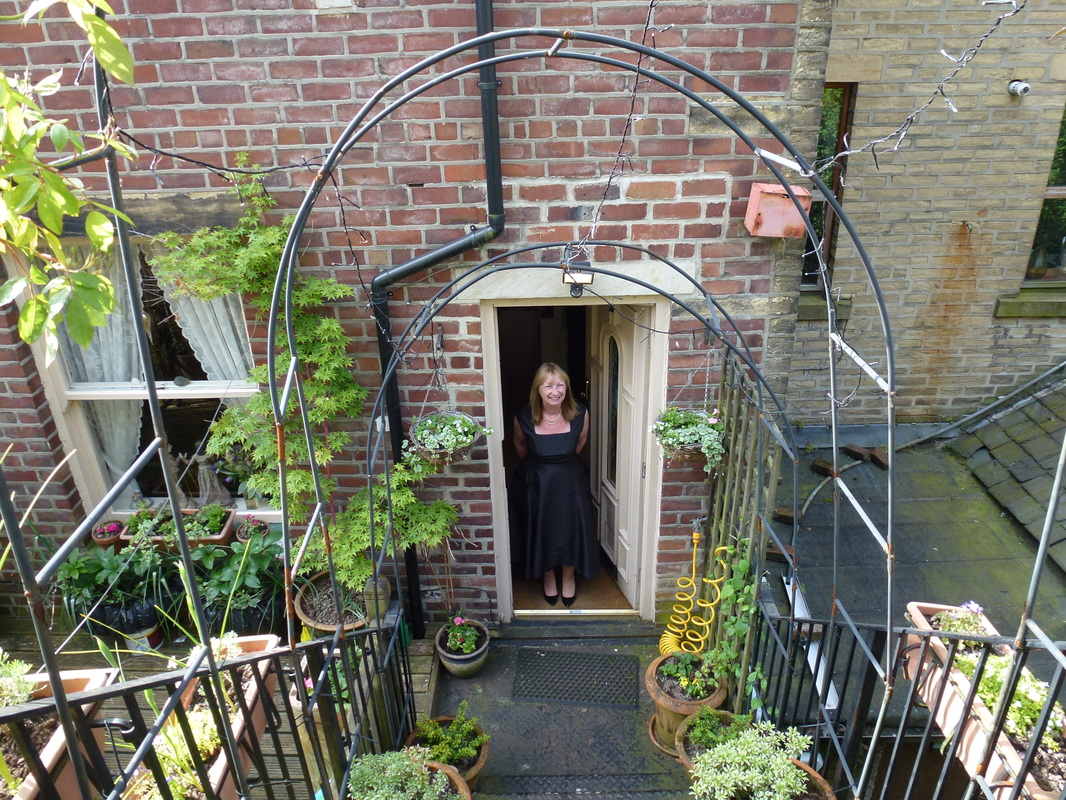 Hebden Bridge is about a mile off route along the Leeds - Liverpool canal. We had a lovely stay with Sharon at her home in Hebden Bridge where she has two big comfortable rooms which are beautifully furnished. We ate a hearty meal in The Stubbing Wharf pub on the canal.​
Day 3 Data
​© Copyright Dave Walsh 2013 - 2022 All Rights Reserved